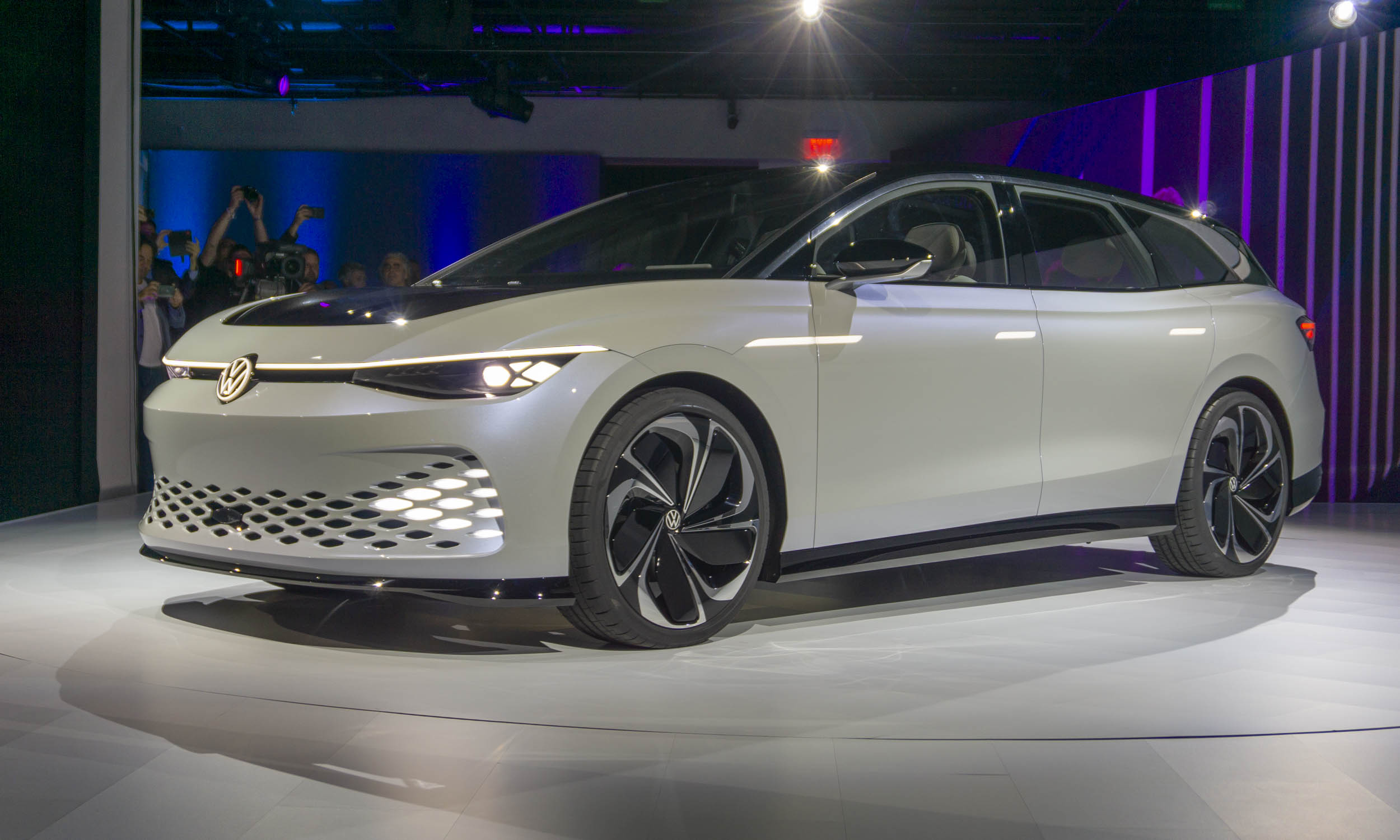 Another ID. Family Member
Seeking a way forward after the dieselgate emissions debacle of 2015, Volkswagen cleverly decided to distance itself from diesels and instead redirect focus to electrification. The Wolfsburg automaker continues to wager that EVs will play a big part in both the future of the automobile and the future of the company. To that end, VW has presented a variety of electric concept vehicles that range from the compact ID. to the much-anticipated ID. BUZZ electric microbus. At the 2019 Los Angeles Auto Show, Volkswagen took the wraps off the seventh entrant of this concept series: the ID. SPACE VIZZION. 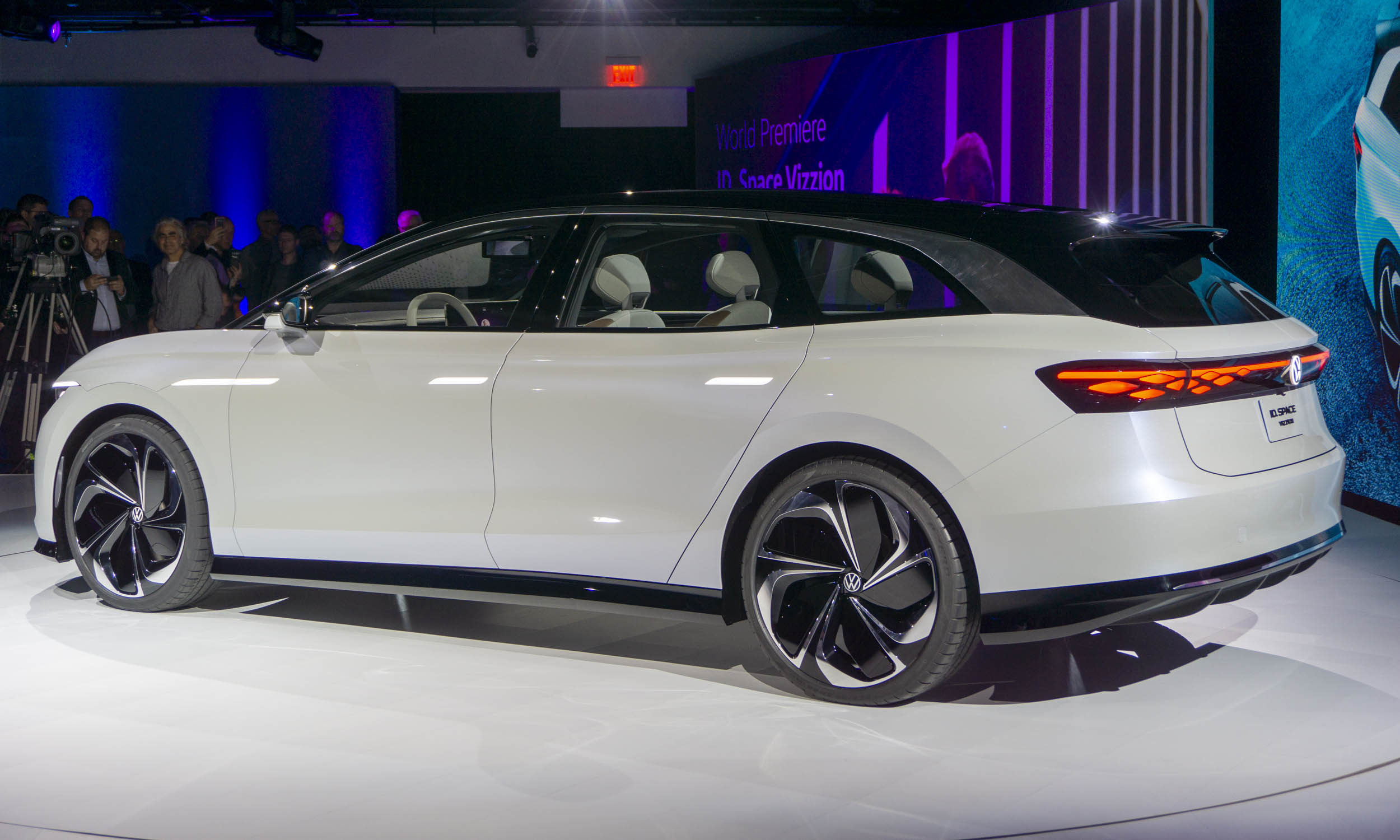 Modular Electric Drive
Similar to the other concepts in the ID. family, the ID. SPACE VIZZION concept showcases the flexibility of Volkswagen’s modular electric drive matrix — or MEB, which is an acronym for the German phrase Modularer E-Antriebs-Baukasten. With compact drive components and batteries integrated into the floor, the MEB architecture is designed for use in all sorts of upcoming vehicles. 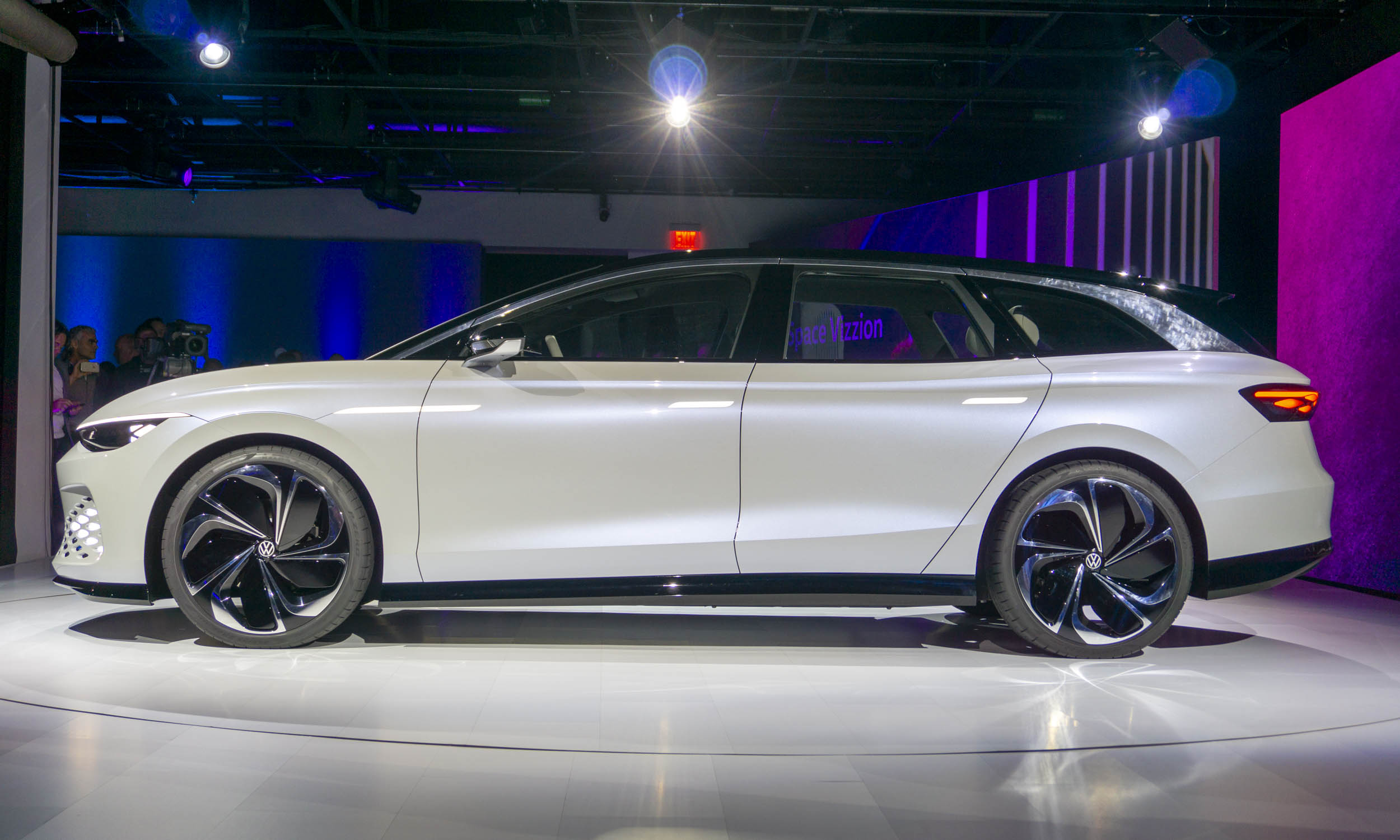 Unique People Mover
The Volkswagen ID. SPACE VIZZION uses the MEB platform in one of the larger variants revealed thus far. More grand-touring wagon than SUV, the ID. SPACE VIZZION concept is said to be a preview of what will end up as a production vehicle for North America in 2022. With no need to design around an internal combustion engine at the front, the ID. SPACE VIZZION features a low hood that flows smoothly into the windshield and on toward the rear of the vehicle, providing a sleek and aerodynamic silhouette. 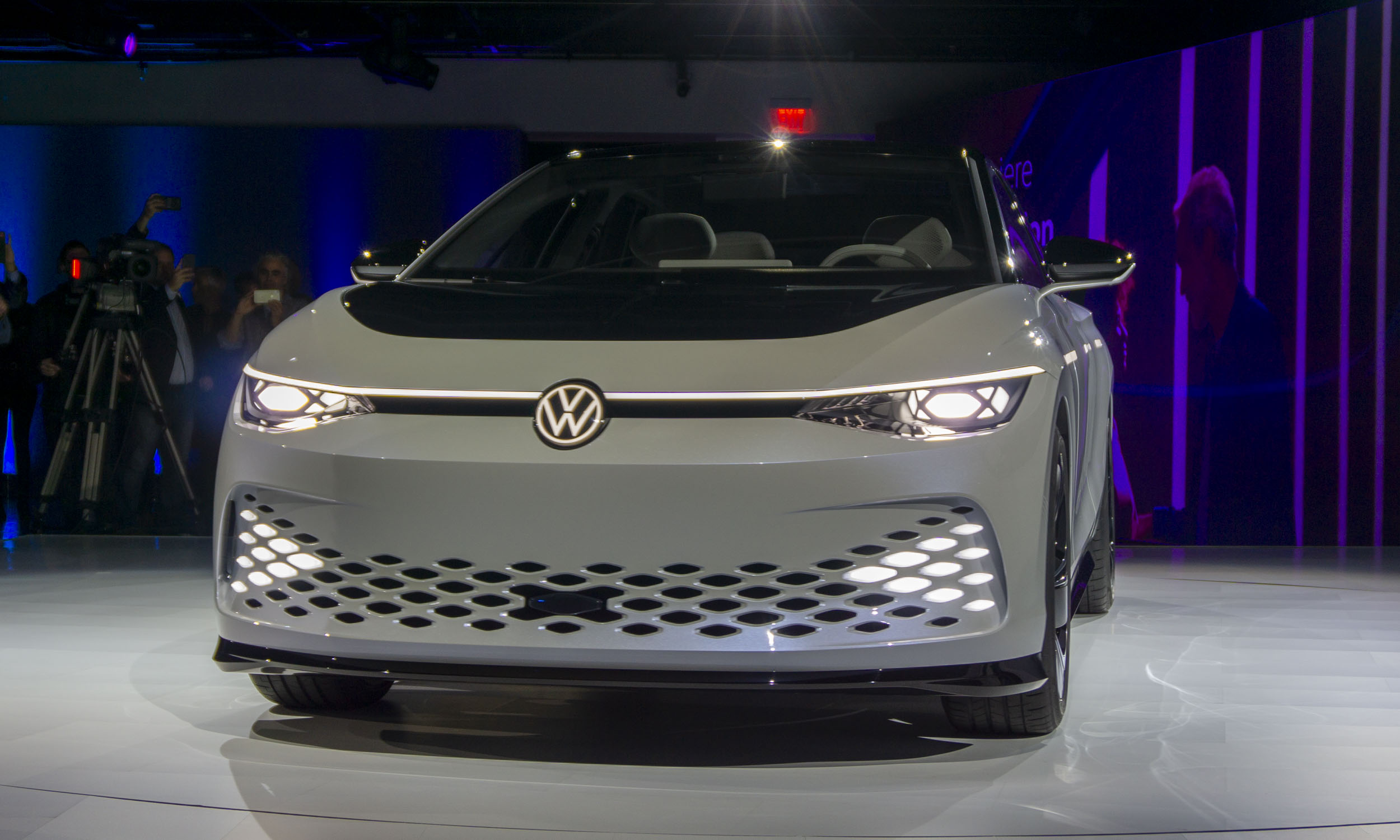 Advanced Lighting
Adding to the futuristic look of the ID. SPACE VIZZION is unique lighting. An illuminated VW logo at the front has strips of light stretching out to the right and left, continuing intermittently to the rear of the car. LED Matrix headlights are integrated into the bumper, with honeycomb-style LED running lights that have become a signature of ID. concept vehicles. 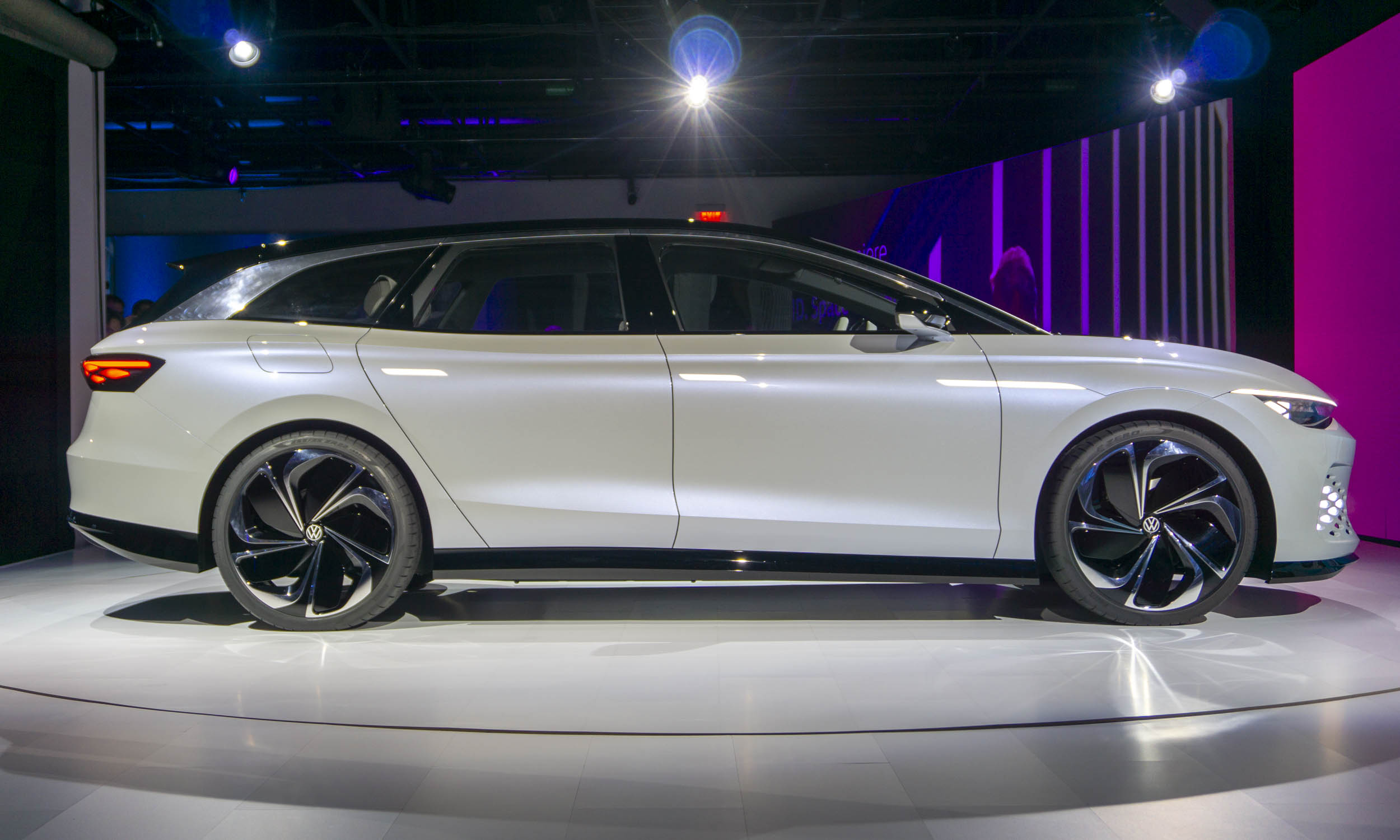 Sleek Shape
The surface of the ID. SPACE VIZZION features a clean design, devoid of any door handles that might detract from the look. Instead, hidden pads light up as one approaches with the key — pushing the pad results in the door opening. 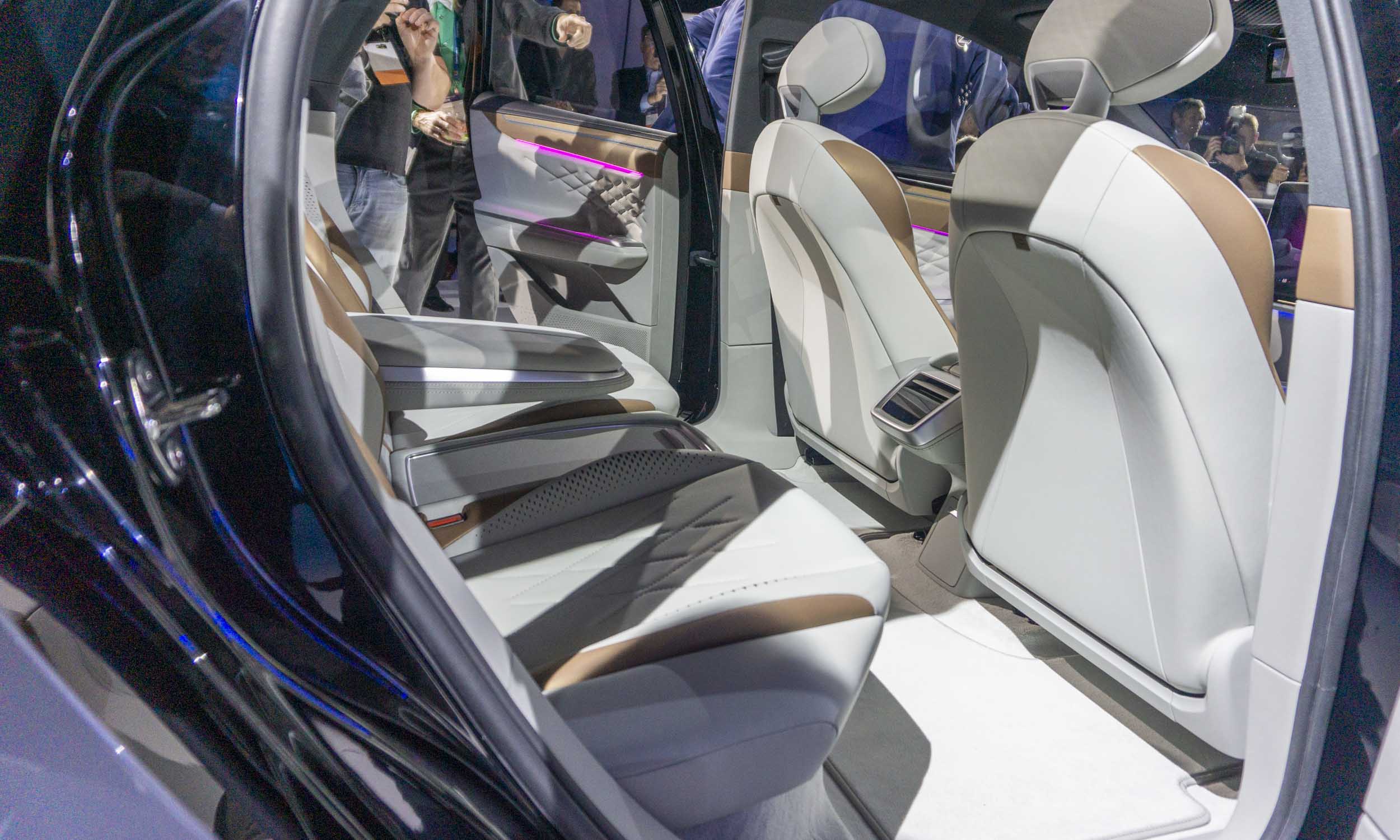 Spacious Interior
With the door open, the ID. SPACE VIZZION reveals a spacious interior that looks much larger than expected. This concept is configured with four seats; however, Volkswagen points out that in a production version there could easily be seating for five. A center console sits between the seats with space for storage as well as multiple USB-C ports. 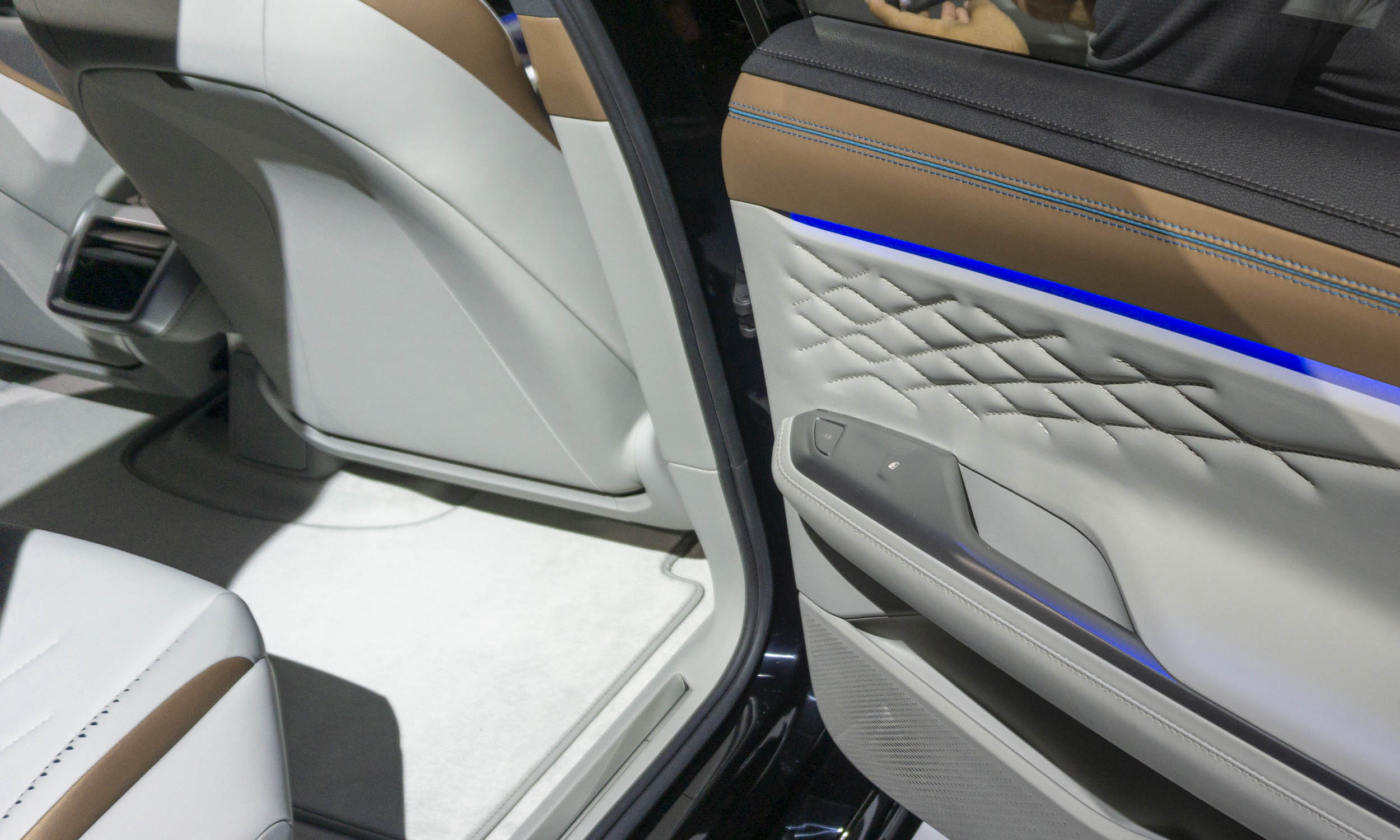 Sustainable Materials
The Volkswagen ID. SPACE VIZZION concept utilizes sustainable materials including a chromelike paint instead of chrome, and a new trim material called AppleSkin. This new material feels and looks like leather but is actually made with the “residual matter” from apple juice production. 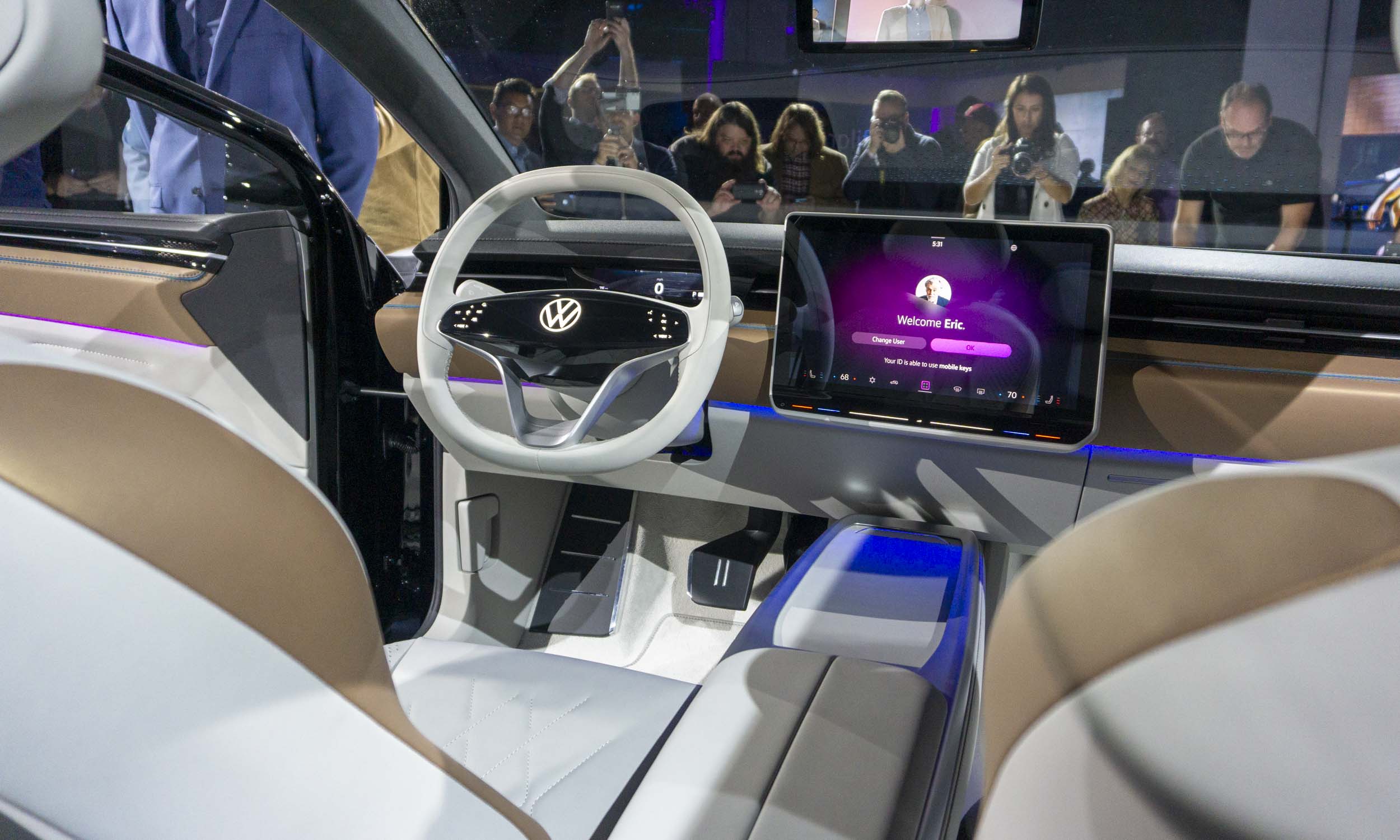 Futuristic Cockpit
The cockpit of the ID. SPACE VIZZION is completely digital; however, the primary information gets presented to the driver via an Augmented Reality head-up display. The traditional cockpit shows basic information on a secondary mini display. The multi-function steering wheel uses capacitive touch panels instead of the typical buttons, and the shifter has been moved to a stalk on the right side of the steering column. 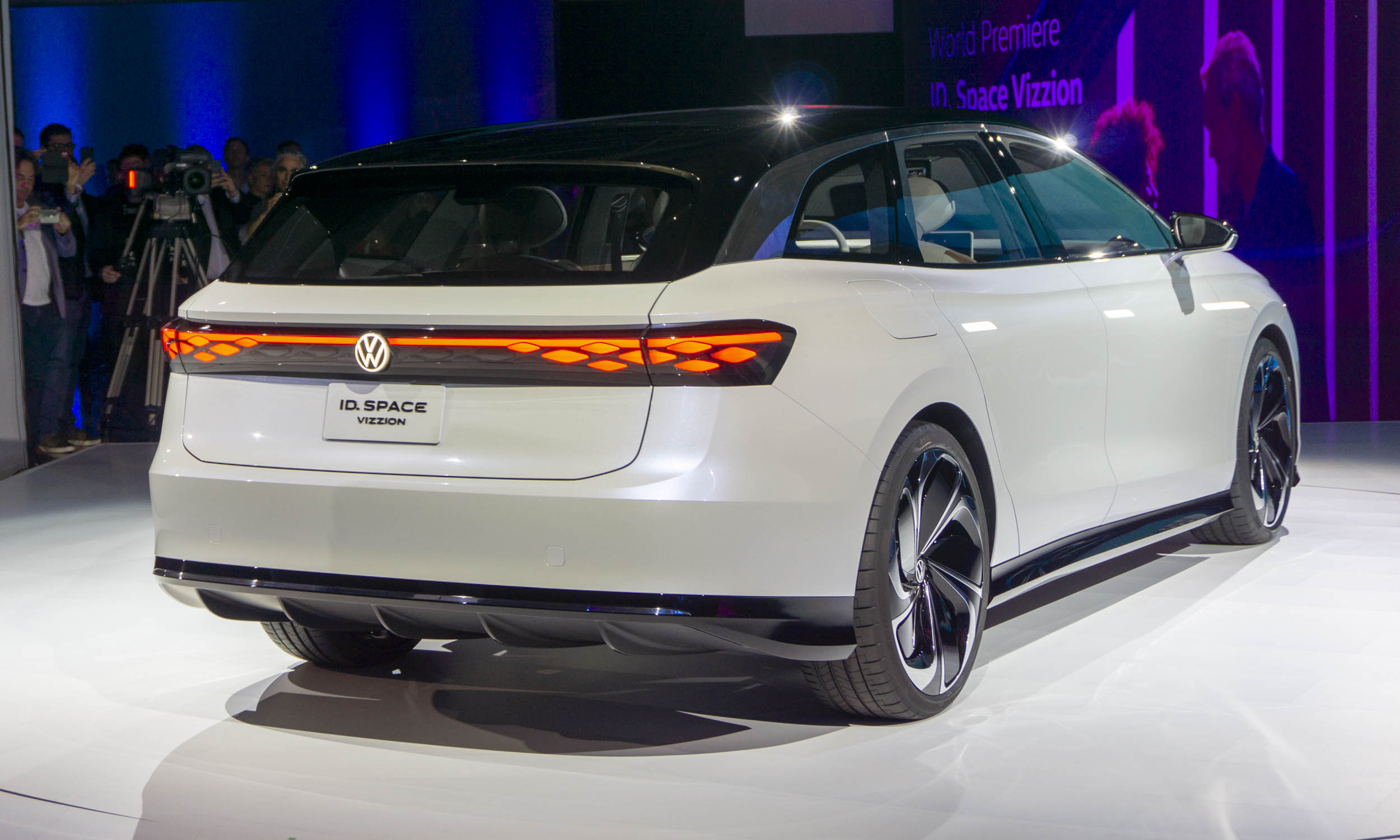 Plenty of Power
The Volkswagen ID. SPACE VIZZION is powered by a rear-mounted electric motor that produces 275 horsepower. The motor gets its juice from an 82-kWh lithium-ion battery pack. While this is a rear-wheel drive concept, VW says that the flexible architecture would allow for an additional motor, boosting power to 355 horses and providing the ID. SPACE VIZZION with 4MOTION full-time all-wheel drive. 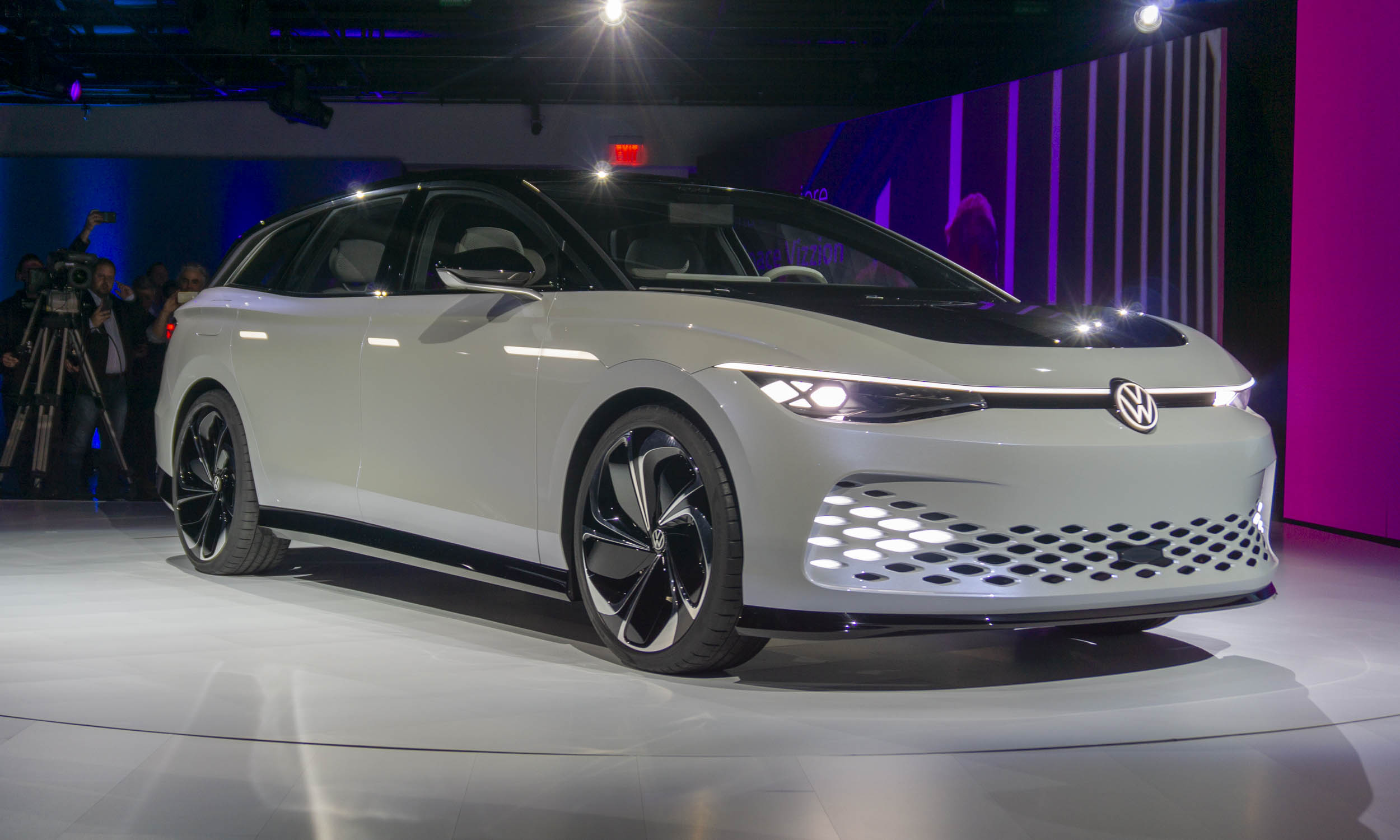 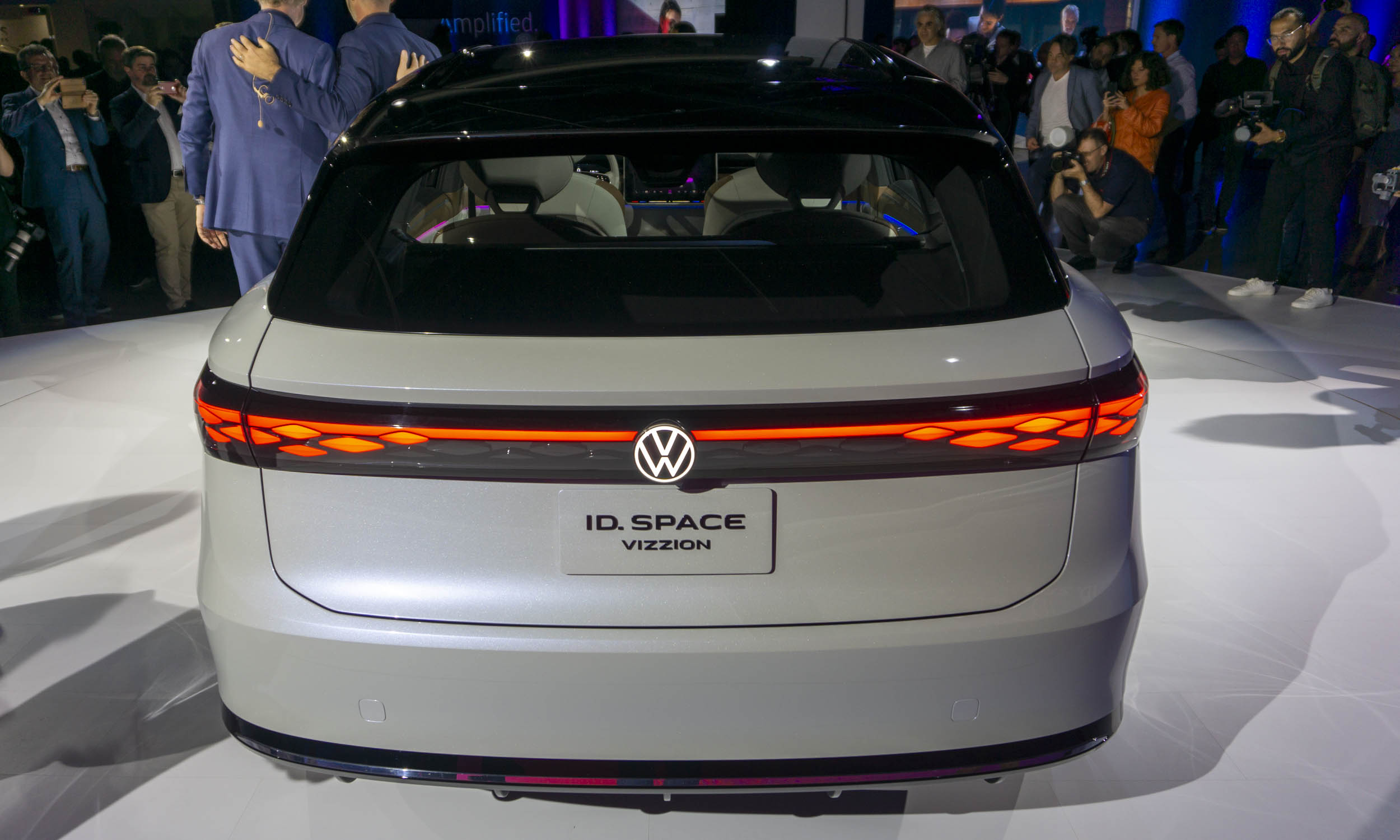 Coming Soon?
Volkswagen announced that the ID. SPACE VIZZION would be the basis for a production vehicle coming sometime in 2022. However, with seven different ID. concepts presented and the groundbreaking done at the Chattanooga, Tennessee, assembly plant to expand for EV production, we might start seeing production models for the American market even sooner.