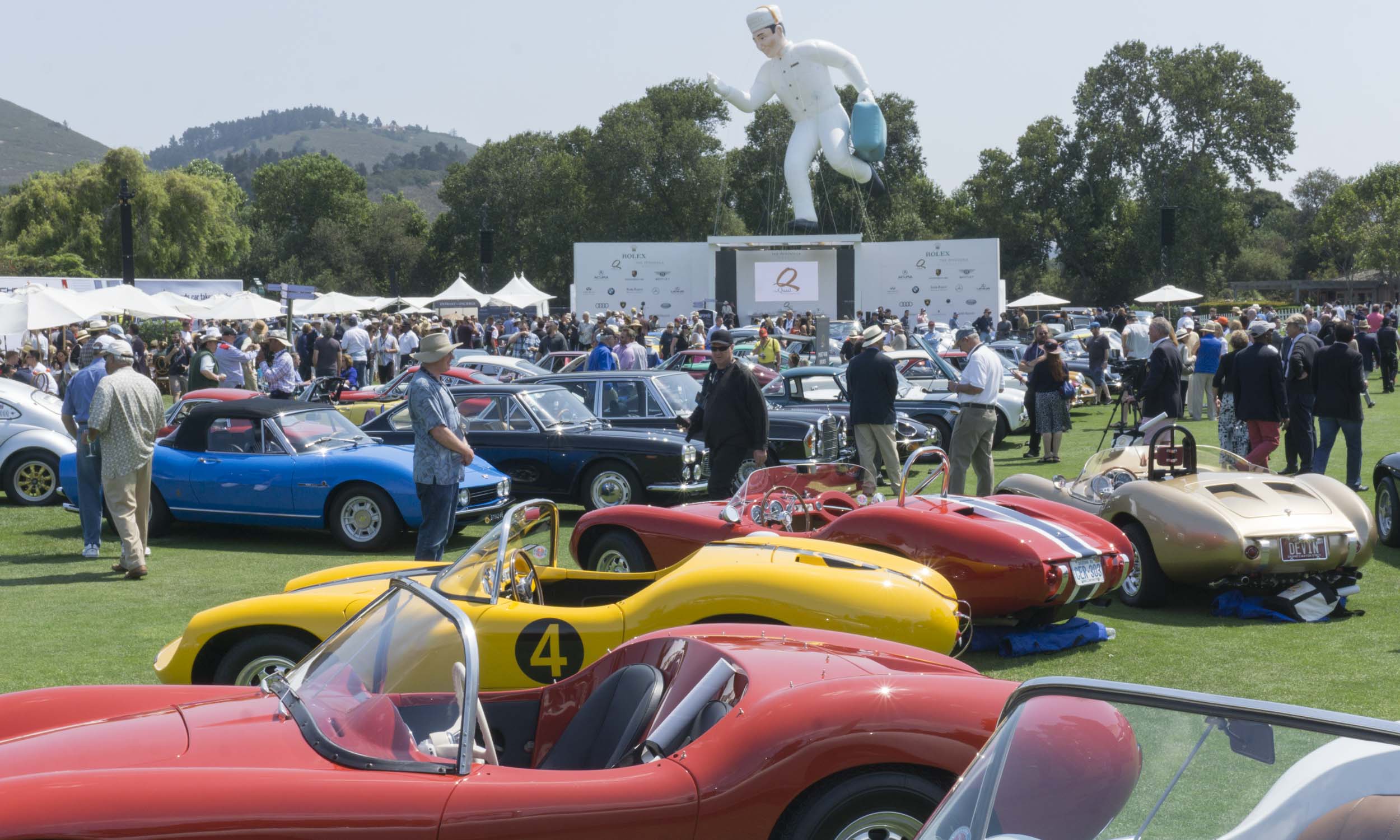 Exclusive Event
For car enthusiasts, there’s no better place to be in August than Monterey, California. During four days that culminate with the Pebble Beach Concours d’Elegance, countless events celebrate the automobile and those who love them. One of the most exclusive events of the week is The Quail, A Motorsports Gathering. Over the years the Gathering grew in popularity to the point that organizers had to implement a lottery system for purchasing tickets — which start at $650 — and every year hopeful attendees have to be turned away. 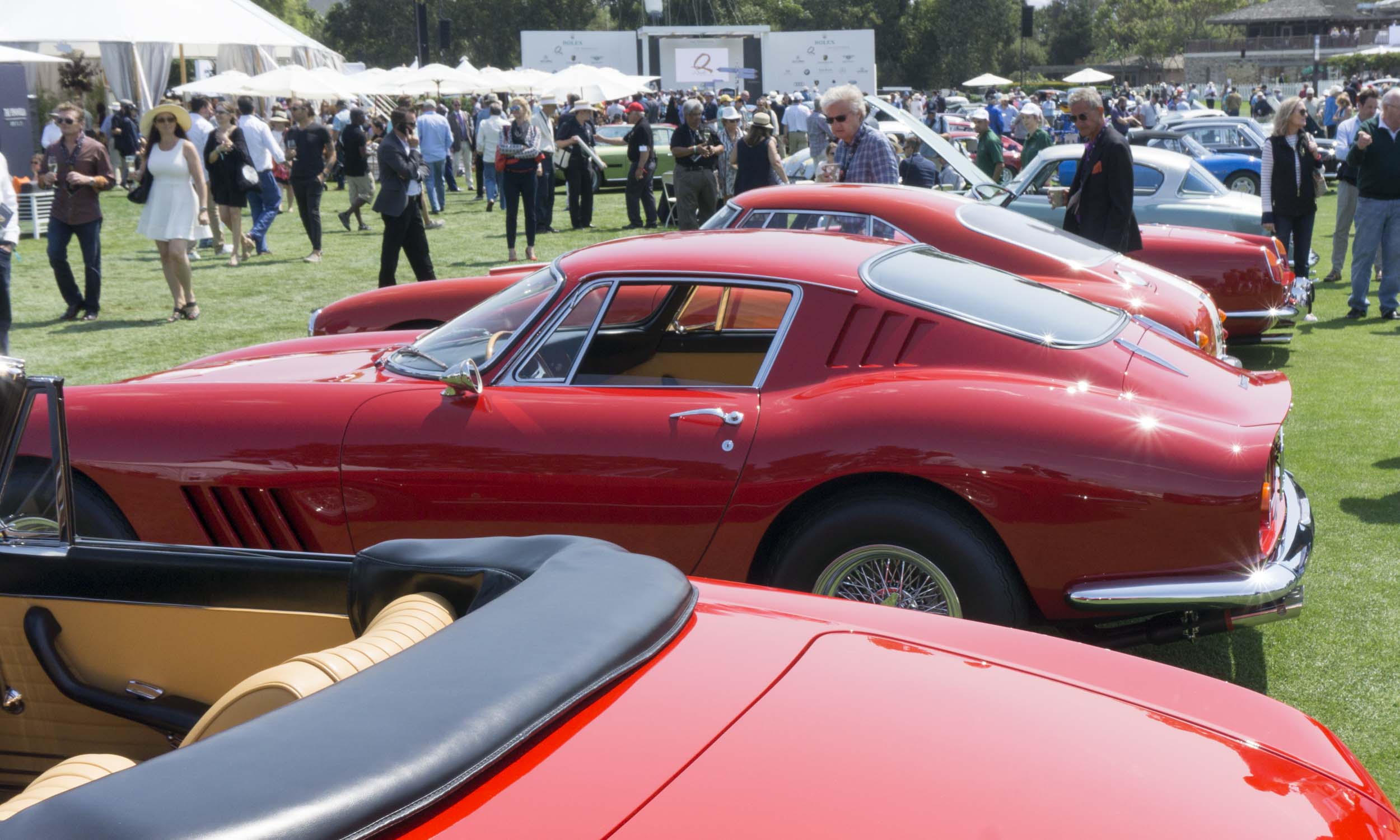 Rare Cars, Gourmet Food and More
What makes the Motorsports Gathering so popular? With only 5,000 tickets available, the event is a bit more intimate than many others in the area. That said, the Gathering has grown considerably over the years. In addition to admiring the rows of elegant classic, custom and exotic cars on display, guests have the opportunity to sample a wide variety of gourmet food, as well as test drive an assortment of high-end, exotic automobiles. For hopeful attendees who missed out this year, fear not — there’s always next year. In the meantime, take a look at a few notable vehicles that were on display. 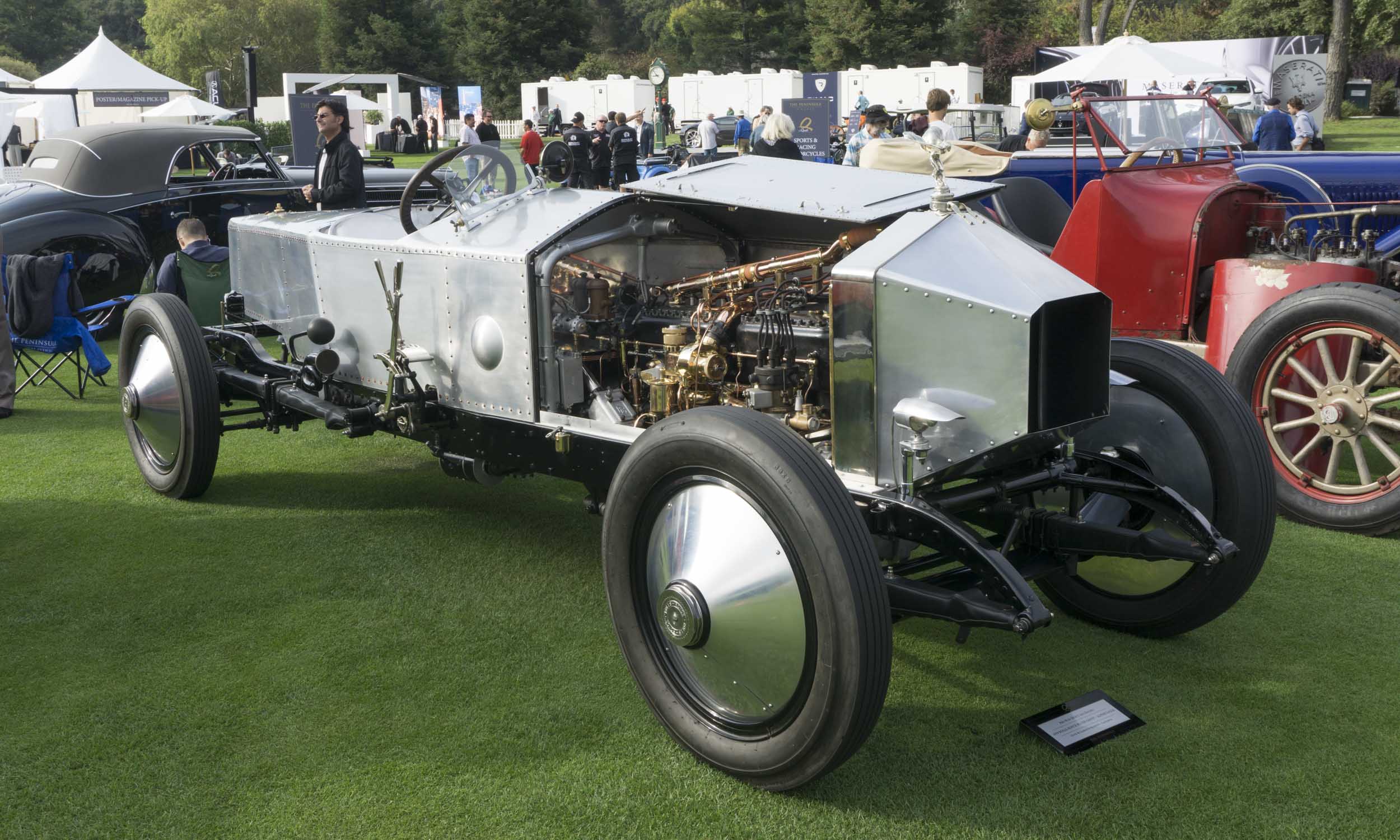 1919 Rolls-Royce Silver Ghost Alpine Eagle
We knew there was something special about this Rolls-Royce as soon as we saw it, but the story behind the car is even more compelling. According to owner David Morrison of California, Rolls-Royce executives wanted to break the speed record at the Brooklands racetrack in England, with plans to go 100 mph down the quarter-mile straight and then complete 100 miles traveled in one hour. The company took a Ghost Alpine Eagle chassis and built a streamlined body for it. The plan worked and the car achieved 101.8 mph. But after this record run, Rolls removed the body and destroyed it, putting the chassis back into standard production. 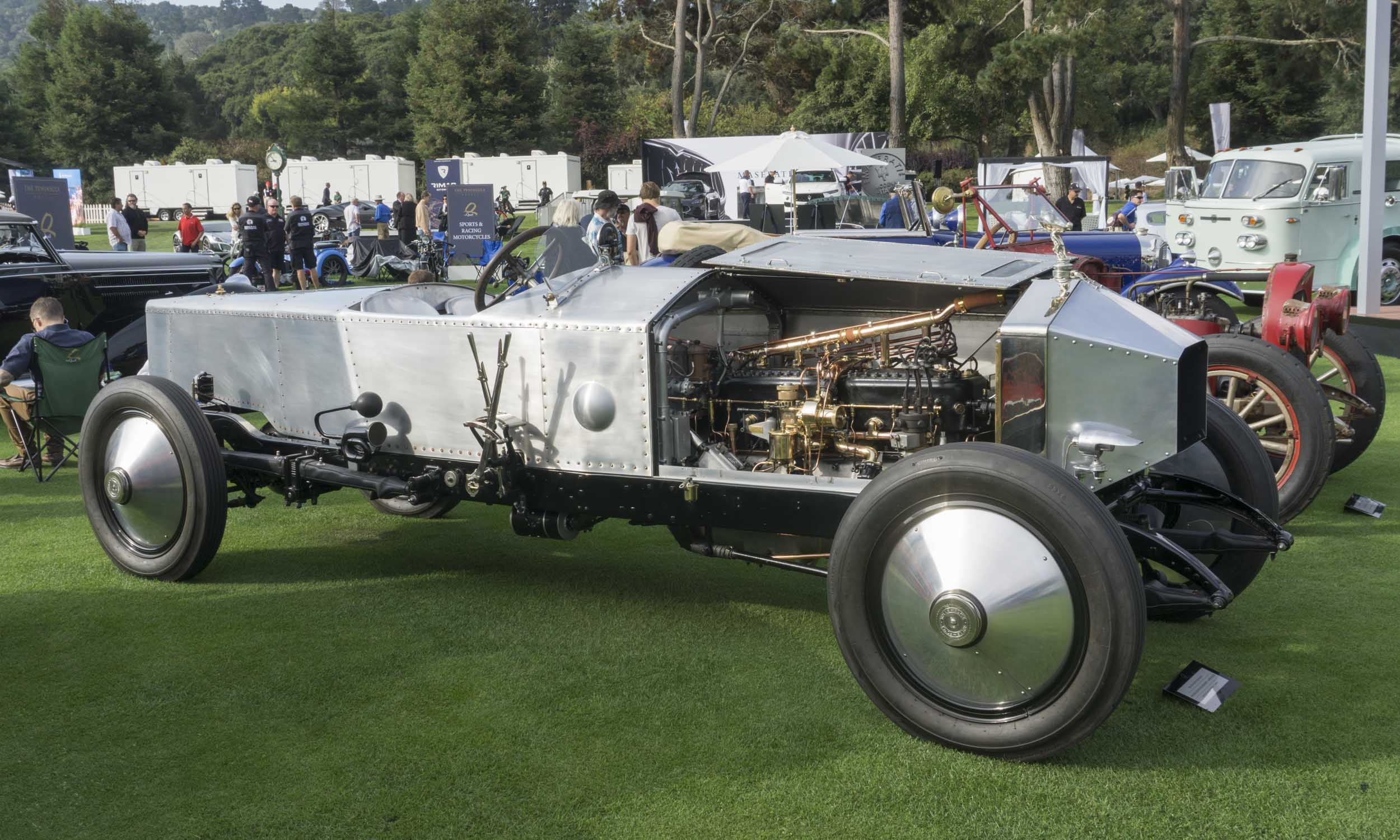 1919 Rolls-Royce Silver Ghost Alpine Eagle
Morrison bought the car with a 1930s body on it from Australia, and at the time he didn’t know what it was. When he received the build sheets from Rolls-Royce, he realized that this Alpine Eagle chassis is special, removed the 1930s body and set out to rebuild the original racing body, called the “Sluggard.” Even more significant, Morrison told us that this was the last race car Rolls-Royce ever built. With no documents on the Sluggard body, Morrison used photos to recreate it since the original had been destroyed. When asked how the Sluggard drives, Morrison simply replied “It’s a handful.” 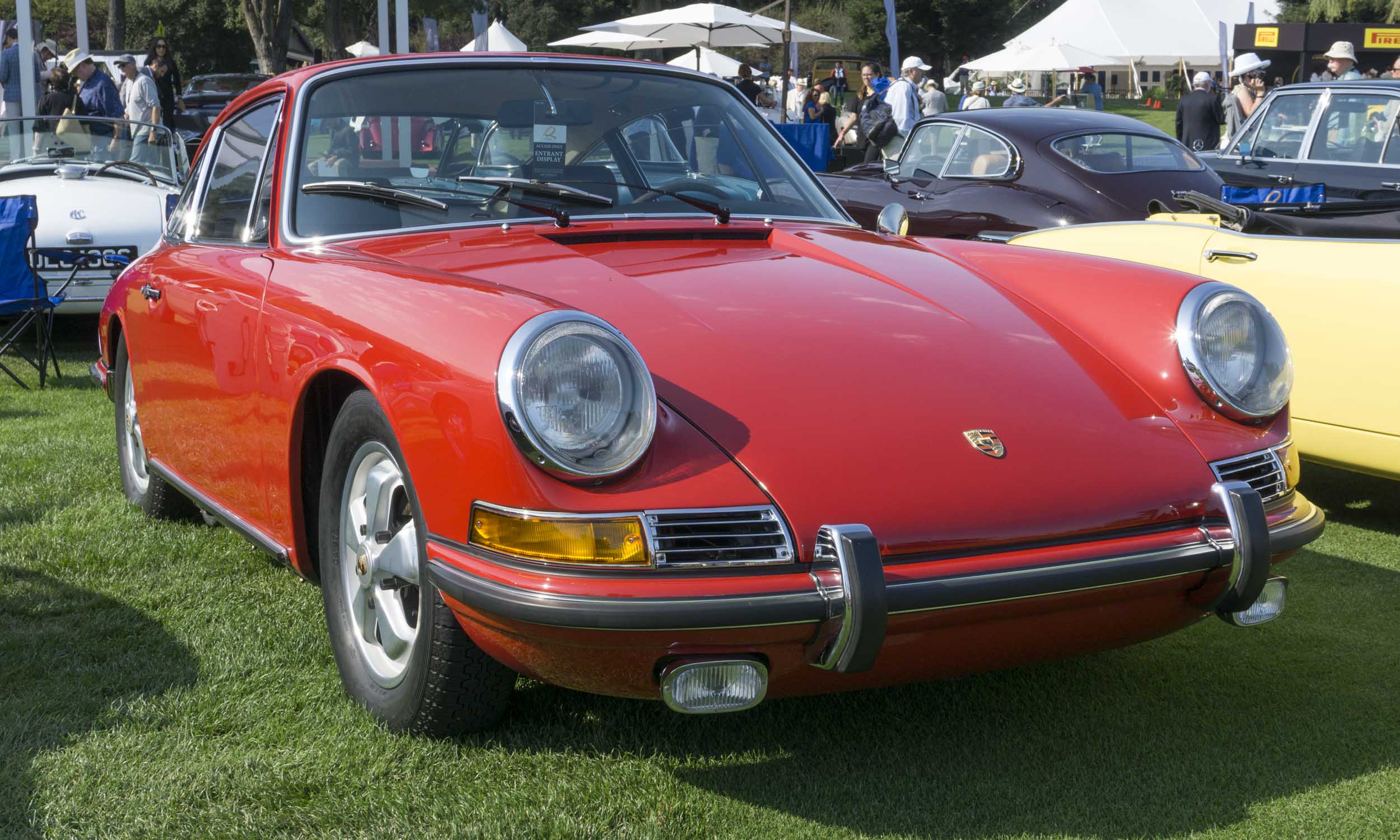 1967 Porsche 911
If you happen to own a vintage automobile, you are probably familiar with the Hagerty name. Hagerty Insurance provides coverage to many valuable classic automobiles on the road today. CEO McKeel Hagerty has always been a car enthusiast, and at the Quail this year Hagerty showed his 1967 Porsche 911. While this is a great car, standing alone it doesn’t seem to be anything special. As with many of the vehicles on display, it’s the story behind it that makes it special. 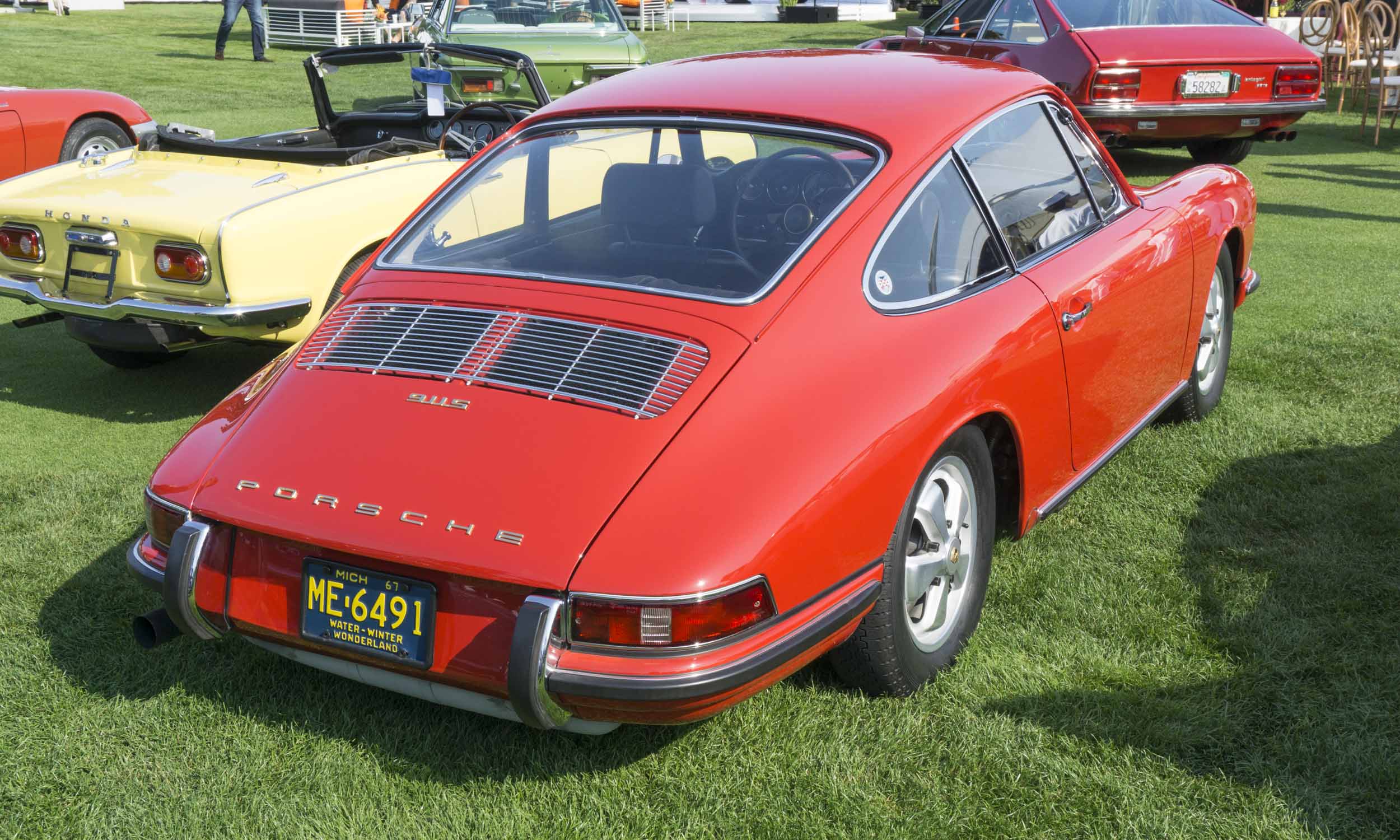 1967 Porsche 911
When McKeel Hagerty was 13 years old he purchased this Porsche for $500. The car was not in great shape — it had been used as an ice racer so it had significant rust damage. With a budget of $2,500, Hagerty and his father restored the car so McKeel could eventually drive it to high school. The car was restored once again a few years ago, and McKeel still drives the car regularly. Most adults don’t keep many toys or touchstones from their youth; not only does McKeel Hagerty still have his — when he gets behind the wheel, he enters a time machine. 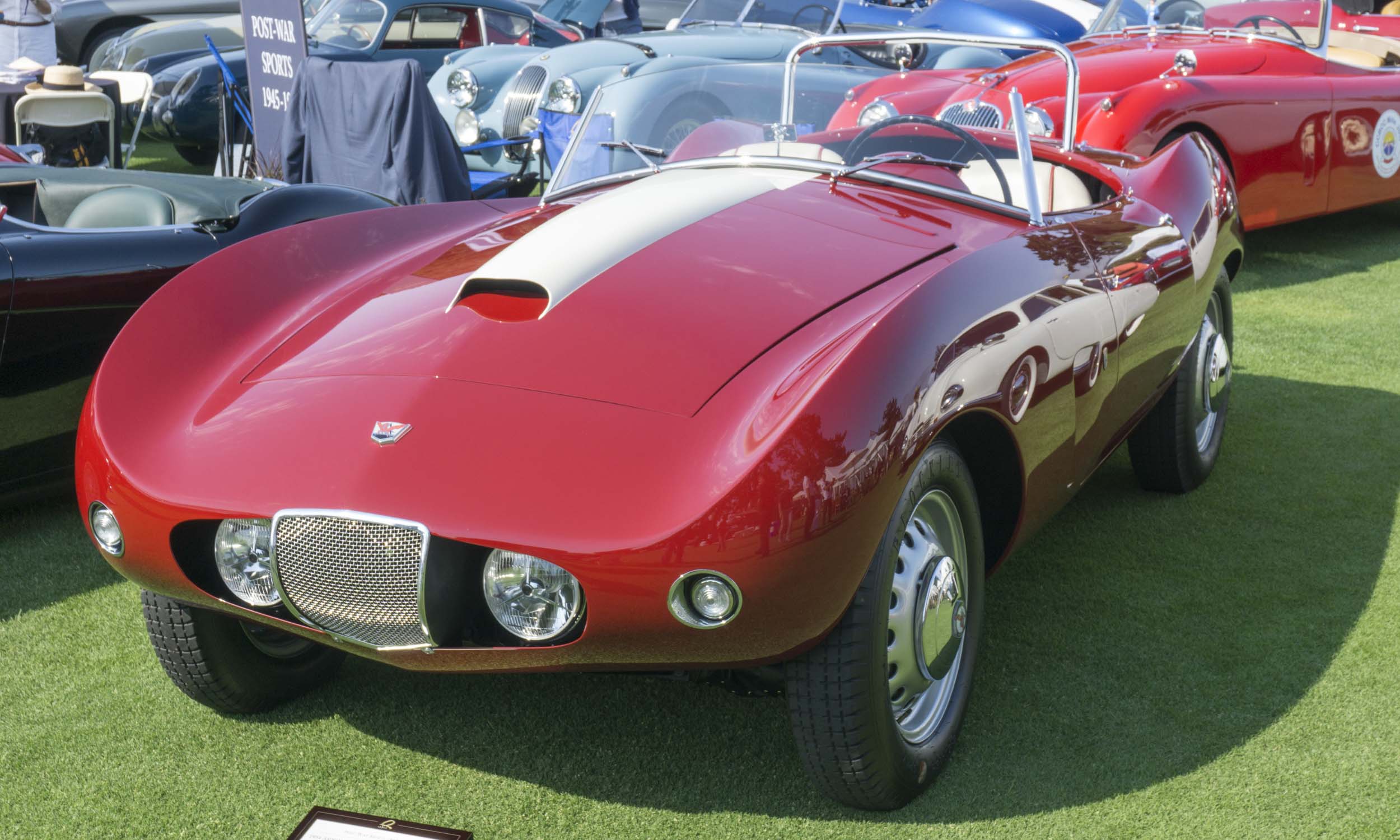 1954 Arnolt Bristol Deluxe Roadster
This unique roadster certainly catches the eye as something a little different and clearly sporty. As owner Alan Rosenblum told us, “Look at the hips. It just seduced me, that’s why I ended up buying the car.” The Arnolt has an interesting history — the body was designed by Bertone in Italy, the engine and chassis came from Bristol in Great Britain, and ultimately they were assembled in the Chicago area. The Roadster was the brainchild of Stanley Harold “Wacky” Arnolt, who came up with the idea of combining the Italian design with the British power. The cars were hand assembled, and over a period of about seven years Arnolt built 142 roadsters; however, 12 were destroyed in a warehouse fire. 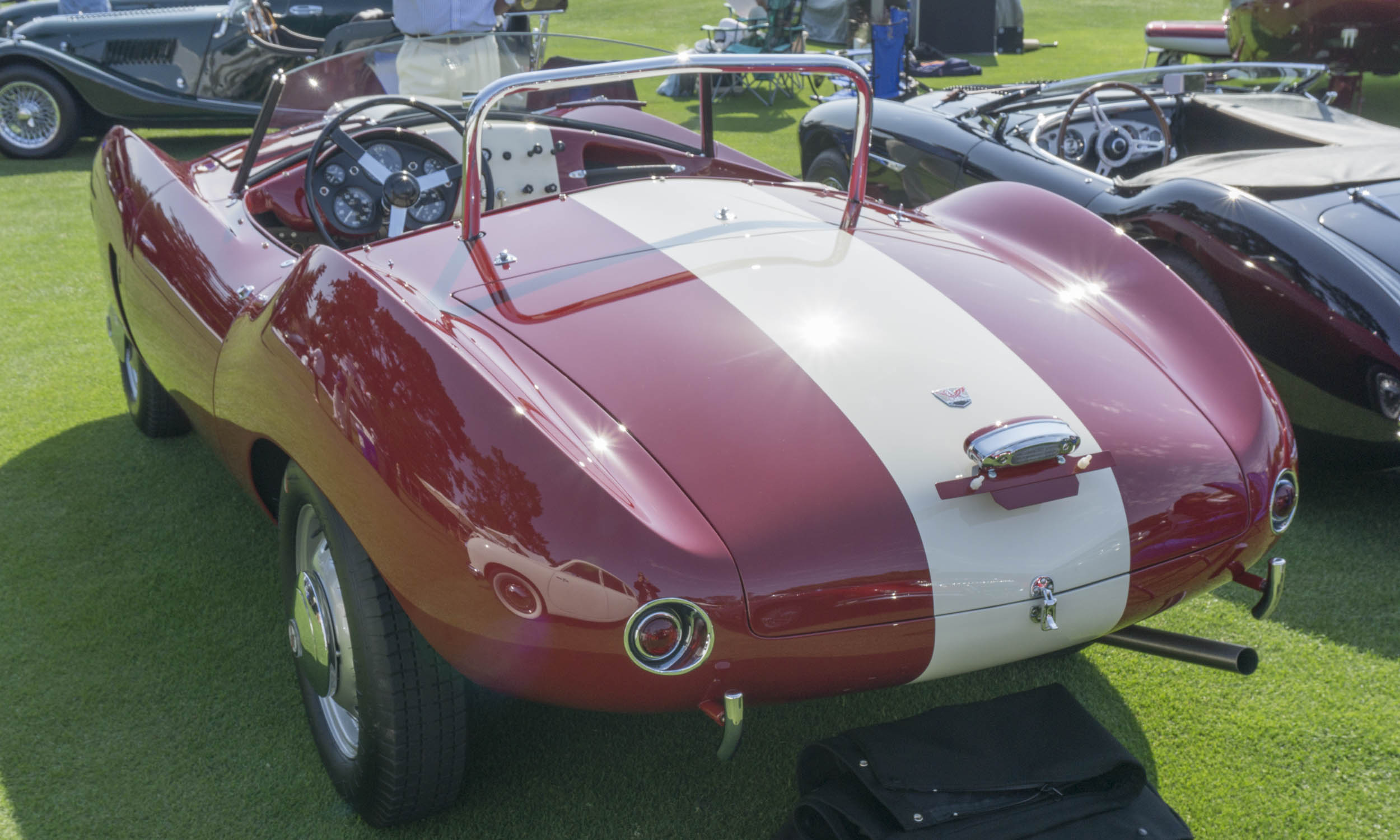 1954 Arnolt Bristol Deluxe Roadster
Rosenblum has owned his Bristol for a year and said it is incredibly fun to drive. The original roadsters were built with a 2.0-liter Bristol motor that produced about 130 horsepower, but the lightweight chassis made for great performance. In fact, Rosenblum likes the car so much he bought two— the other he uses as his rally car. 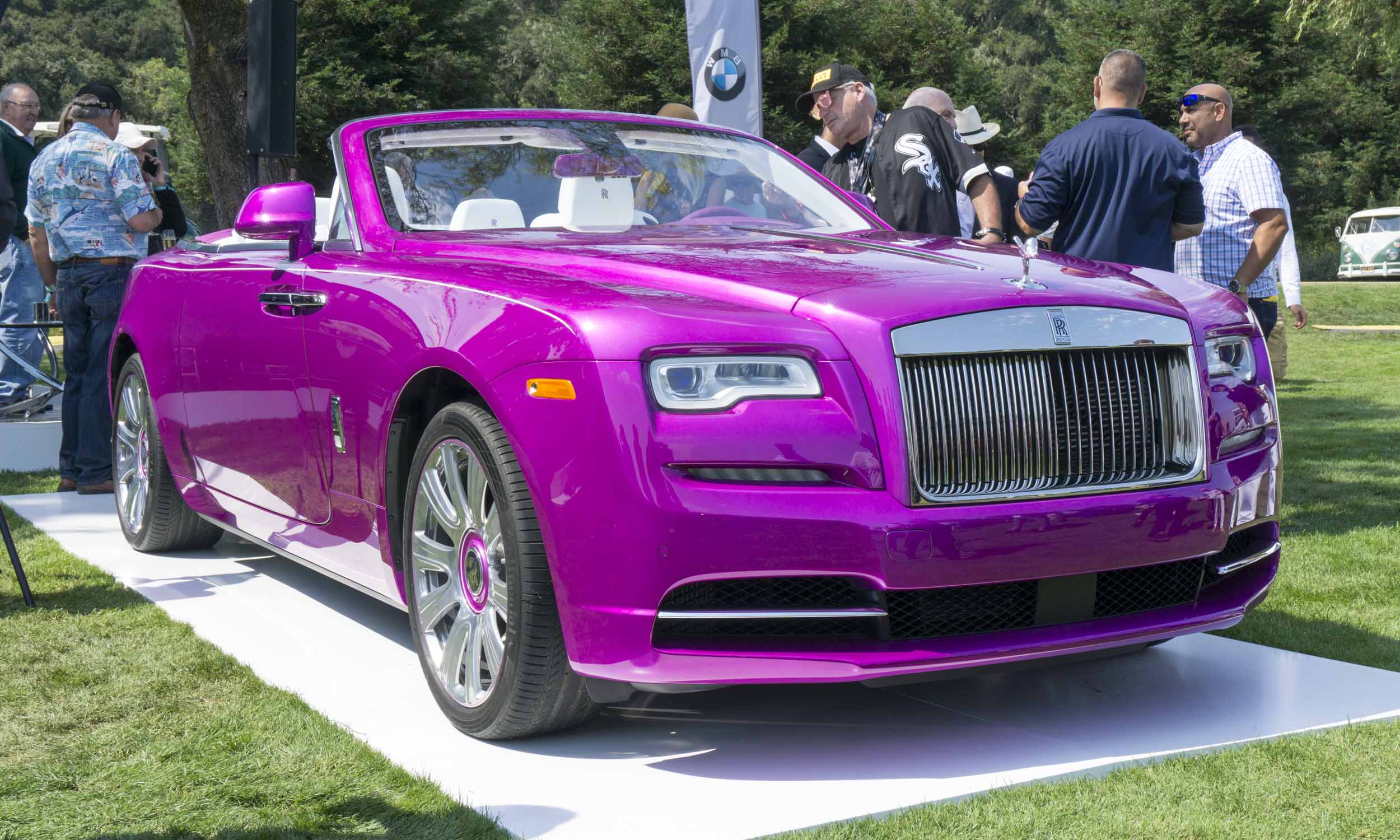 Rolls-Royce ‘Dawn in Fuxia’
In addition to building some of the most luxurious automobiles in the world, Roll-Royce also specializes in personalizing vehicles to its customers’ exact specifications. Nobody knows this better than Michael Fux. “Michael is a very special patron of Rolls-Royce Motor Cars,” stated Torsten Müller-Ötvös, CEO of Rolls-Royce Motor Cars. “Rolls-Royce designers love working with him because he constantly challenges them to take their work to an even higher level, delivering a true work of art.” 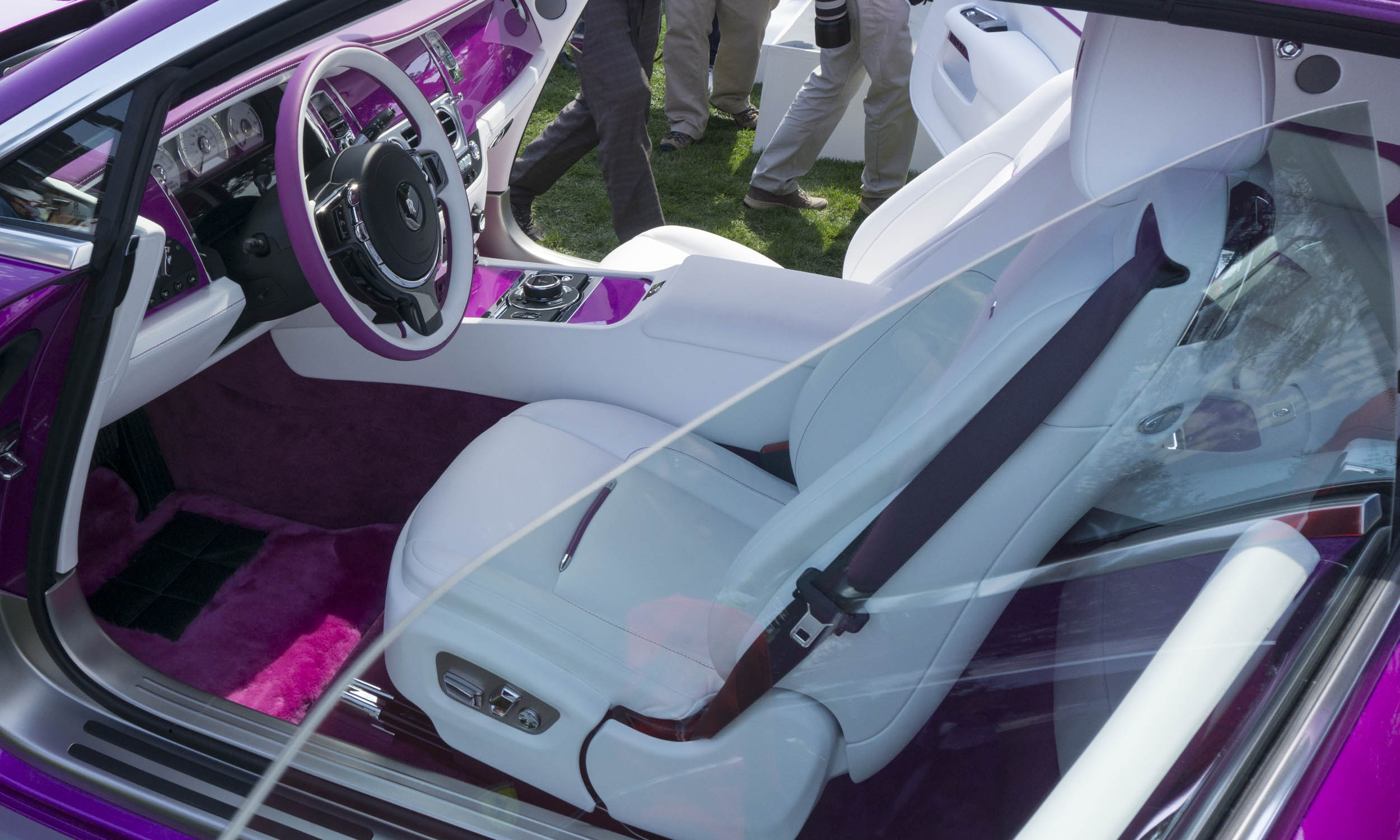 Rolls-Royce ‘Dawn in Fuxia’
This Dawn is the eleventh Rolls-Royce that Fux has commissioned since 2005. The eye-catching color — named “Fux Fuxia” — is based on the petals of a fuscia petals that Fux found on the lawns at Pebble Beach last year. The Fuxia Dawn features white leather seats and trim with the rest of the interior — including the thick carpeting — in Fuxia. Fux likes this color so much that he arranged for Rolls-Royce to provide the color to McLaren for his custom 720S. 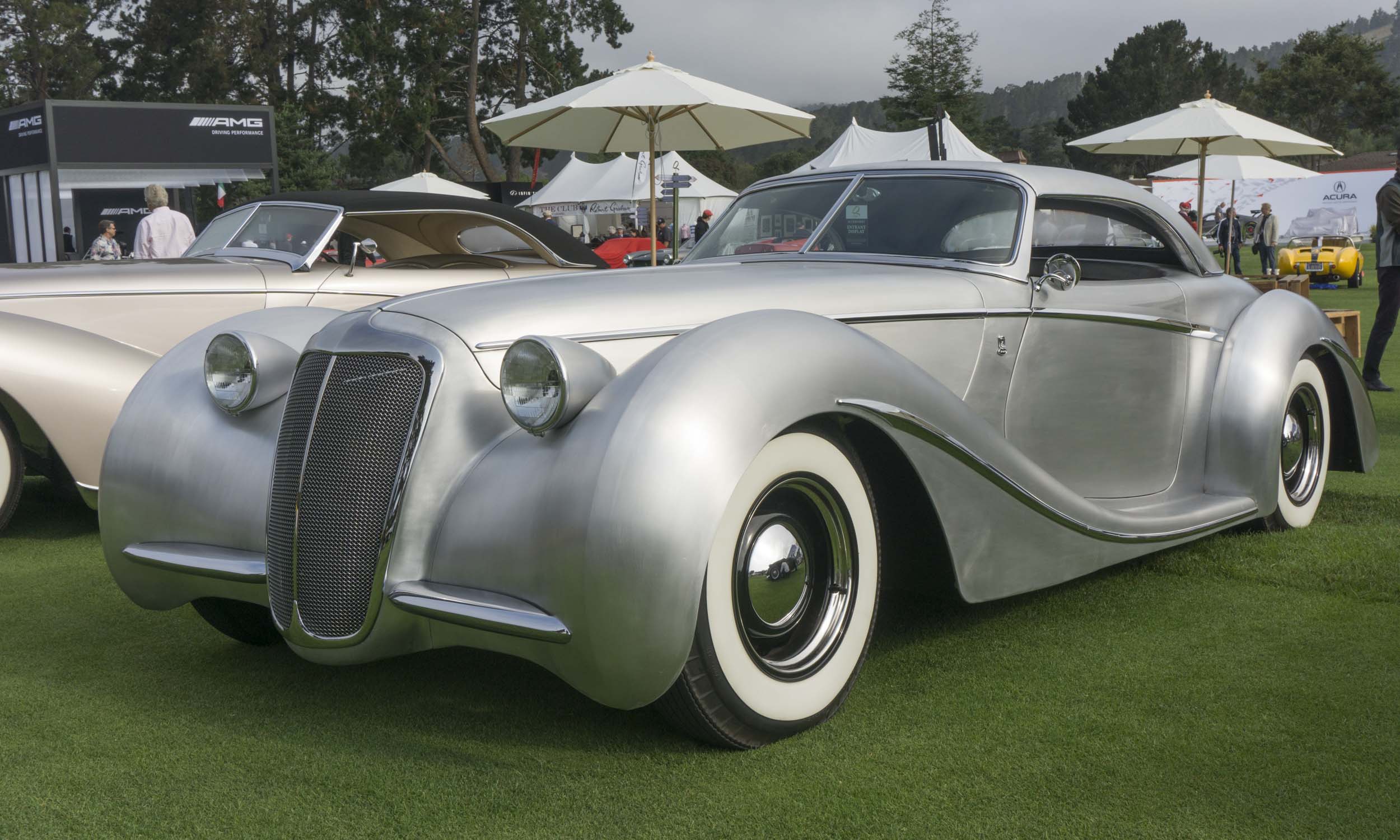 1936 Shangri-La
This stunning automobile may have started life as a 1936 Cadillac, but it became something completely new after legendary customizer Rick Dore went to work on it. The body is completely hand built out of aluminum and shaped by Marcel Delay, who has been building hot rod bodies for years. The chrome trim is made from brass. The tires and the mirror are the only original items left from Cadillac. 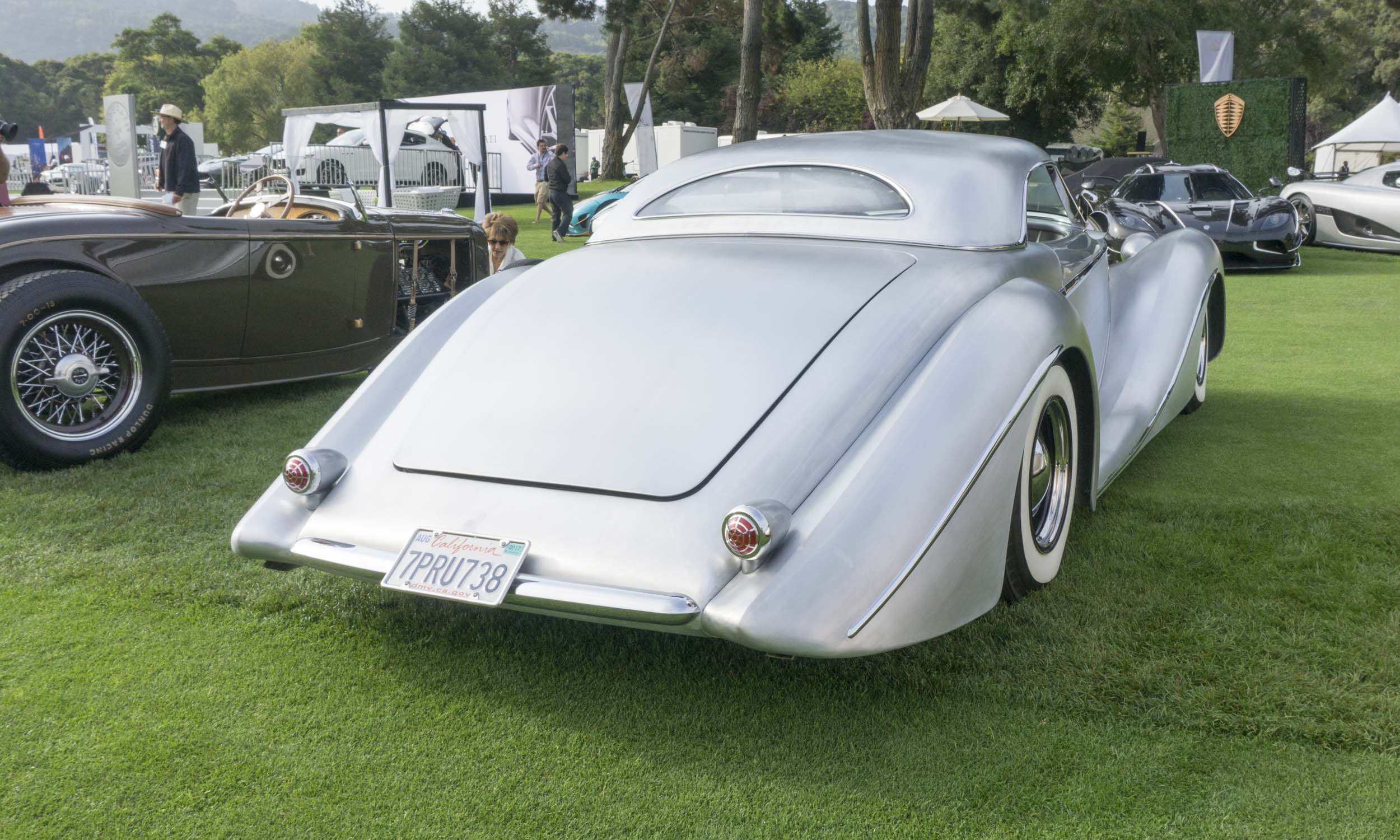 1936 Shangri-La
Dore created the Shangri-La with the idea of marrying French styling with American attitude, and there are clearly lines on this car influenced by French masters Figoni and Falaschi. This one-of-a-kind roadster (yes, the top is removable) was shown at SEMA last fall, and it is probably one of the very few automobiles that can be at home at the SEMA show in Las Vegas as well as on the green at the Motorsports Gathering. 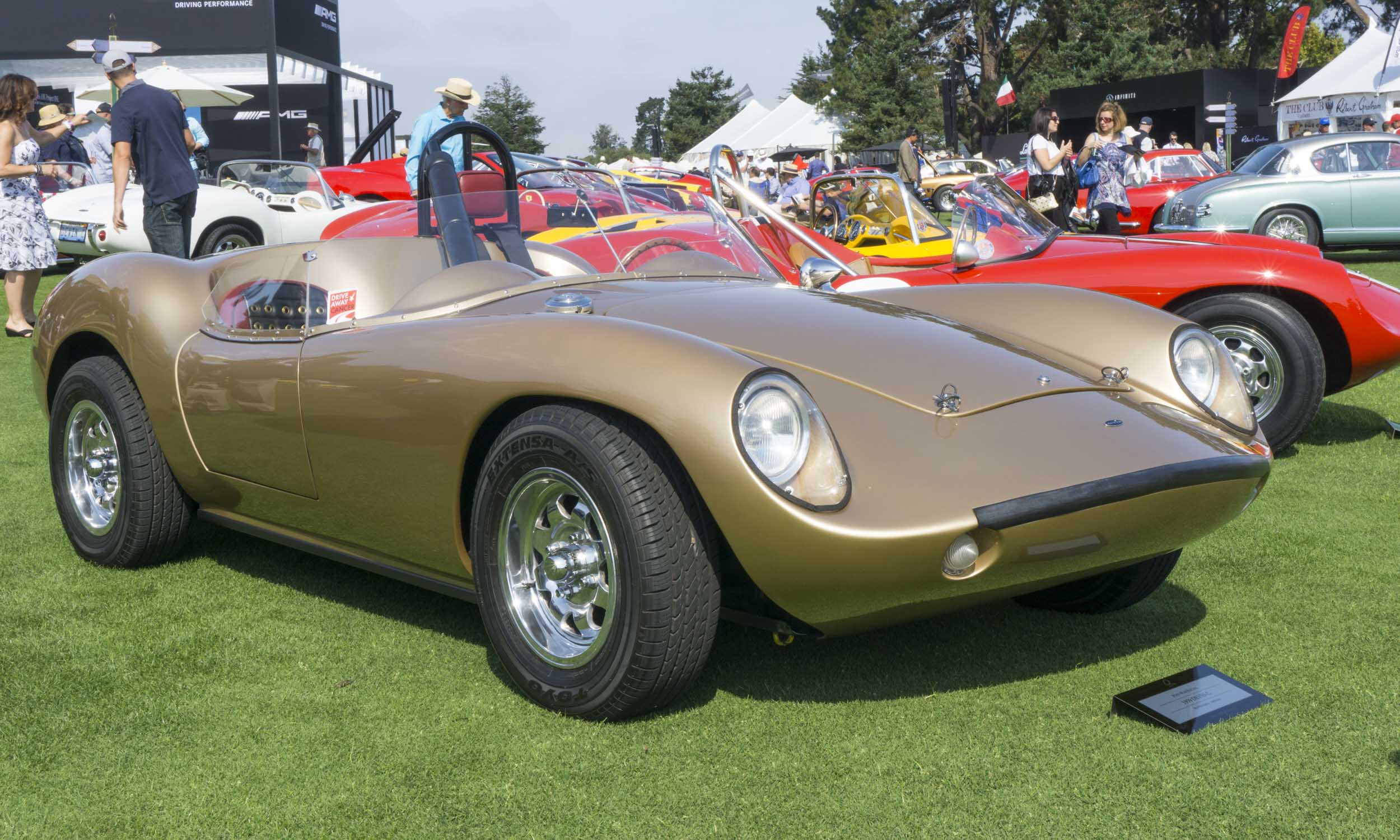 1959 Devin C
Possibly one of the rarest cars on the field at this year’s Motorsports Gathering was this sporty roadster called a Devin C. Bill Devin began his career selling fiberglass kit-car bodies to be used on other chassis; however, in 1958 Devin built a complete car called the Devin D. Engines were provided by Volkswagen or Porsche, but when the Devins started to beat Porsches on the racetrack, the German company was no longer interested in selling engines to Devin. This helped bring about the Devin C, which instead is powered by an engine from a Chevrolet Corvair. There were only about 25 Devin Cs ever built, and this one owned by Bud Bourassa was the first produced. 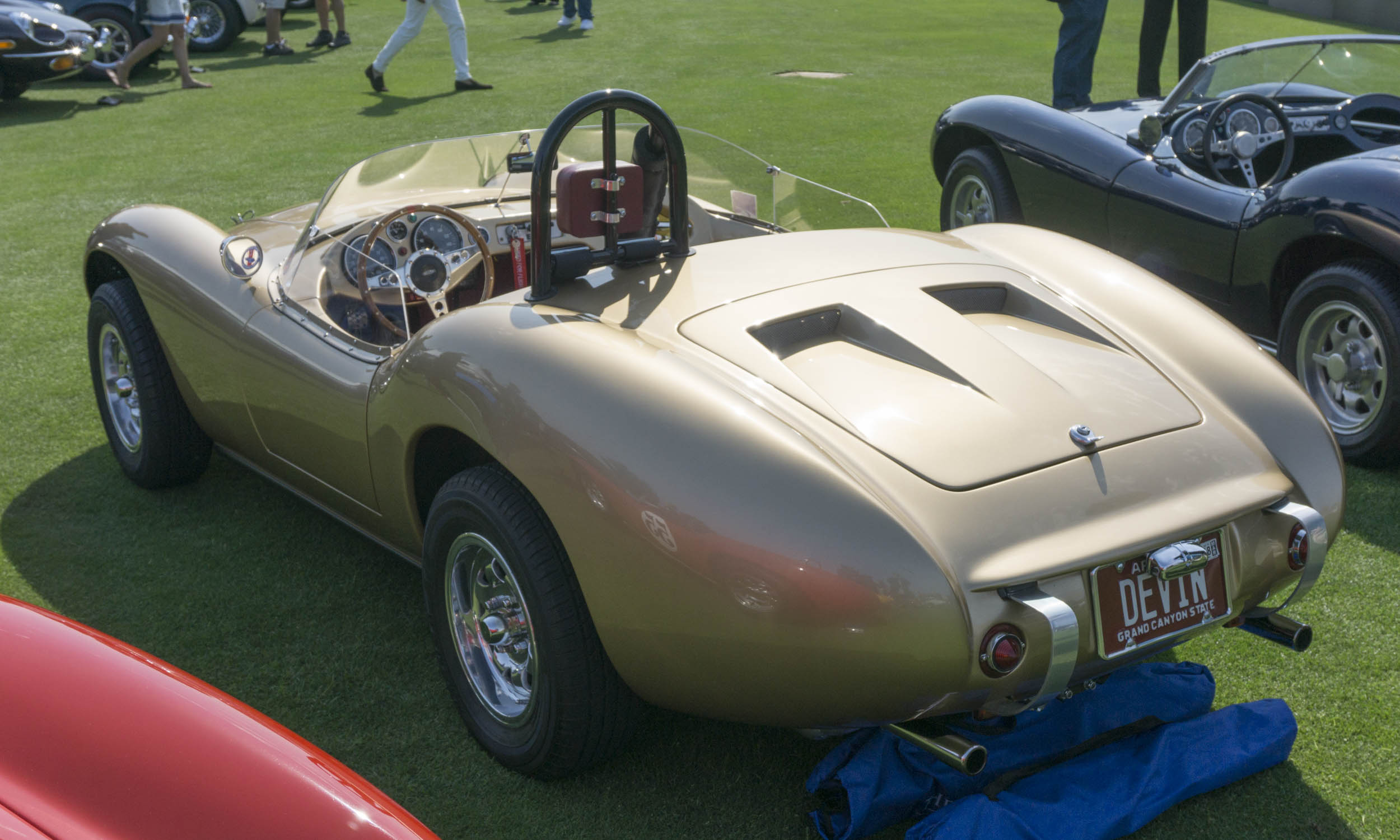 1959 Devin C
Bourassa told us this car has been referred to as the “little car that could,” after it was fitted with a supercharger and hit 165 mph at the Bonneville Salt Flats shortly after it was produced. Painted gold so it wouldn’t be confused with Max Balchowsky’s Old Yeller cars, the Devin had considerable racing success in the early 1960s. Since this was the first car built, it originally belonged to Bill Devin, who eventually sold it to one of his friends. When Bourassa obtained the car four years ago it needed a lot of work. But now this car is pristine and with 180 horsepower on tap needing to propel just 1,400 pounds, the Devin is a true sports car. When asked if it is fun to drive, Bourassa quickly said yes, but added that it’s “a little twitchy.” 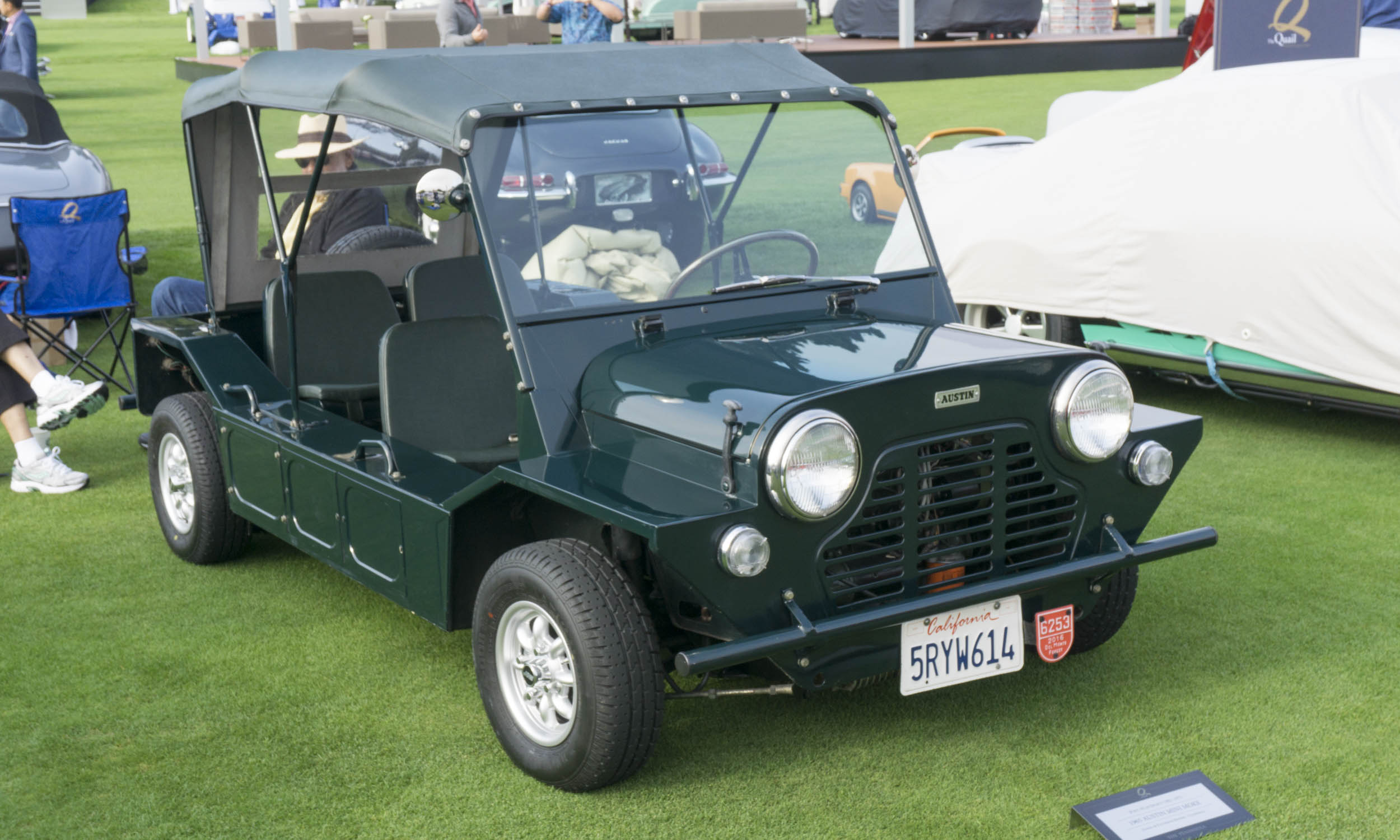 1965 Austin MINI Moke
This little car may have been one of the cutest vehicles on display at this year’s Motorsports Gathering. Looking practically like new, the Austin MINI Moke had a ground-up restoration about 10 years ago. The original idea behind the Moke was to build a lightweight jeeplike vehicle for the military; however, the low ground clearance and lack of 4WD prove to be a deal breaker and a military contract never panned out. 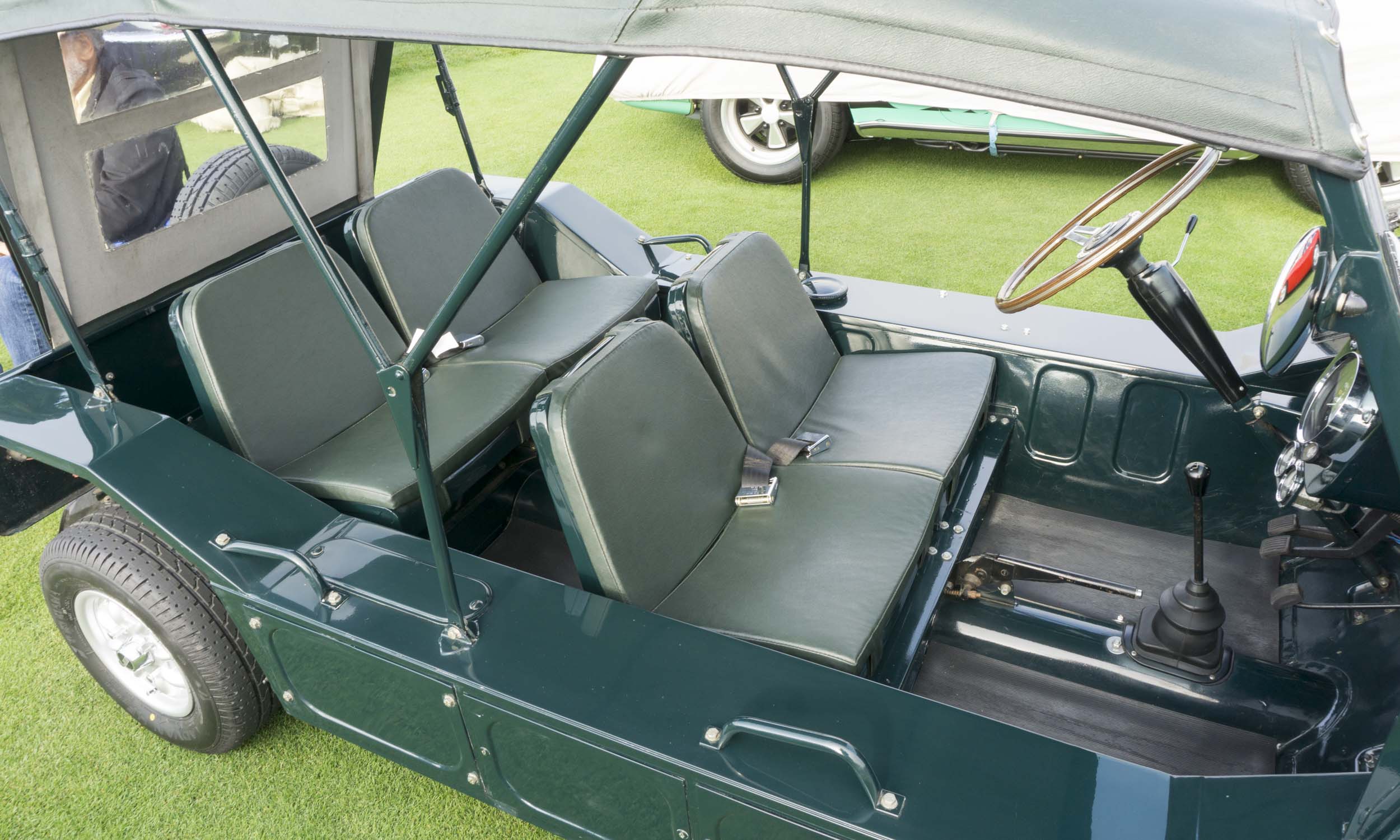 1965 Austin MINI Moke
The Moke became a passenger vehicle and quickly developed a cultlike following. This open body style is rare, but it came from the factory this way — it is not a custom version. The top folds down for proper open-air motoring. The incredibly basic interior reflects MINIs of the era. Of all the cars on display at the Quail this year, the MINI Moke is the vehicle most likely to put a smile on faces as it putt-putts down the road. 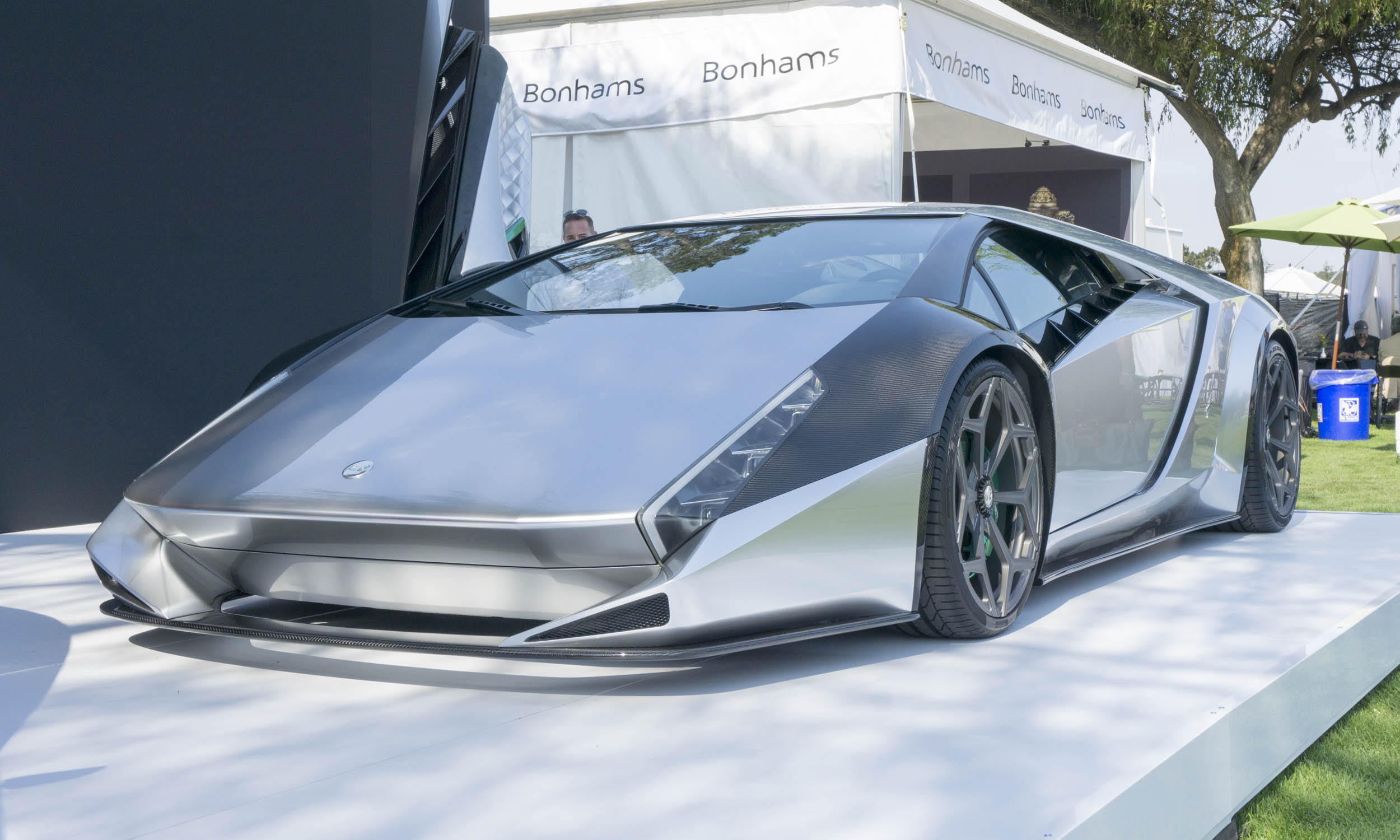 Ken Okuyama Kode (0) Zero
Following the introduction of the stunning Kode57 Enji sports car last year, designer Ken Okuyama brought a new sports car to the Quail called Kode (0) Zero. Okuyama has had a hand in a number of well-known vehicles such as the Ferrari Enzo, Porsche 911 and Maserati Quattroporte, so it’s no surprise that this new exotic captures so much attention. The sleek exotic-looking sports car was influenced by dream cars of the 1970s such as the Lancia Stratos and Lamborghini Countach. 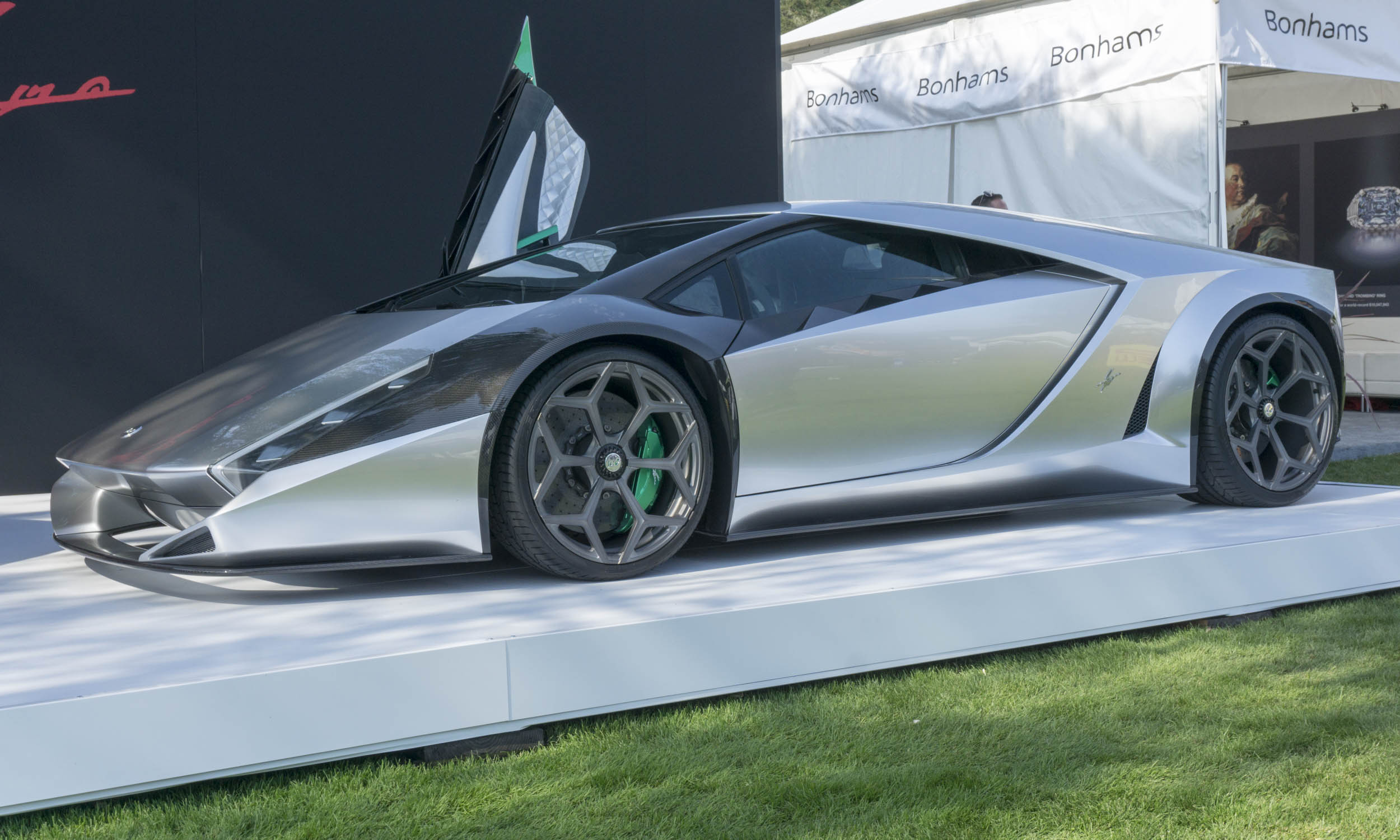 Ken Okuyama Kode (0) Zero
Before unveiling the Kode (0) Zero, Ken Okuyama reminded the crowd that “Ken Okuyama Design is a well-funded independent design company and we don’t have to build cars for a living.” They do this because they want to share the cars and enjoy the experience of designing and creating unique automobiles. The new model features a carbon fiber monocoque and a 700-horsepower V12 engine. As was the case with the Kode 57, only five Kode (0) Zero models will be built. 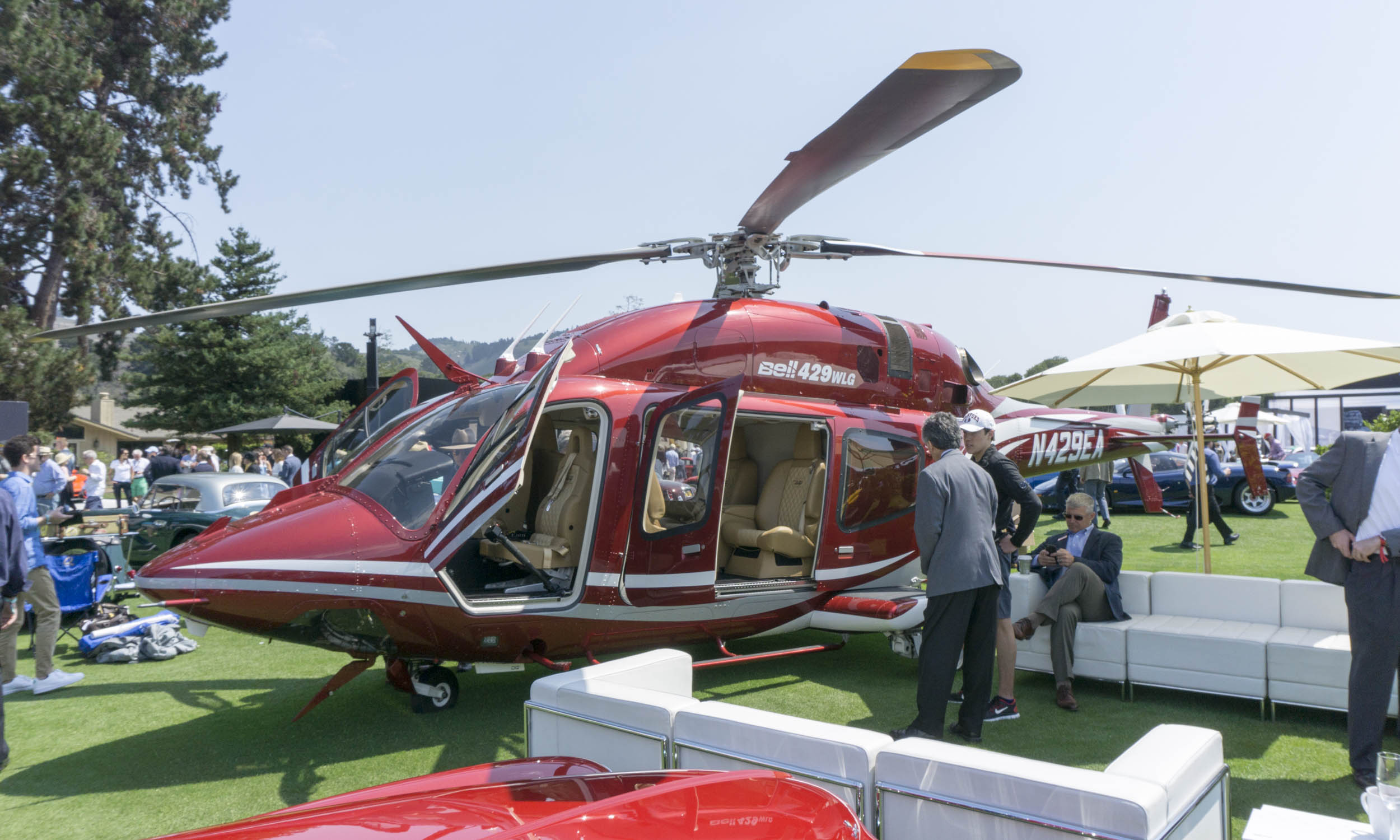 Bell 429 WLG
Sometimes a luxury car simply isn’t enough, so we’re including this other mode of transport on our list of favorites at the Quail. The Bell 429 WLG (wheeled landing gear) is ideal for getting in and out of the city, and the wheeled landing gear offers additional flexibility since the helicopter can taxi once on the ground. With a price starting around $6 million, the Bell 429 WLG can cruise at just under 180 mph and has a range of 485 miles. 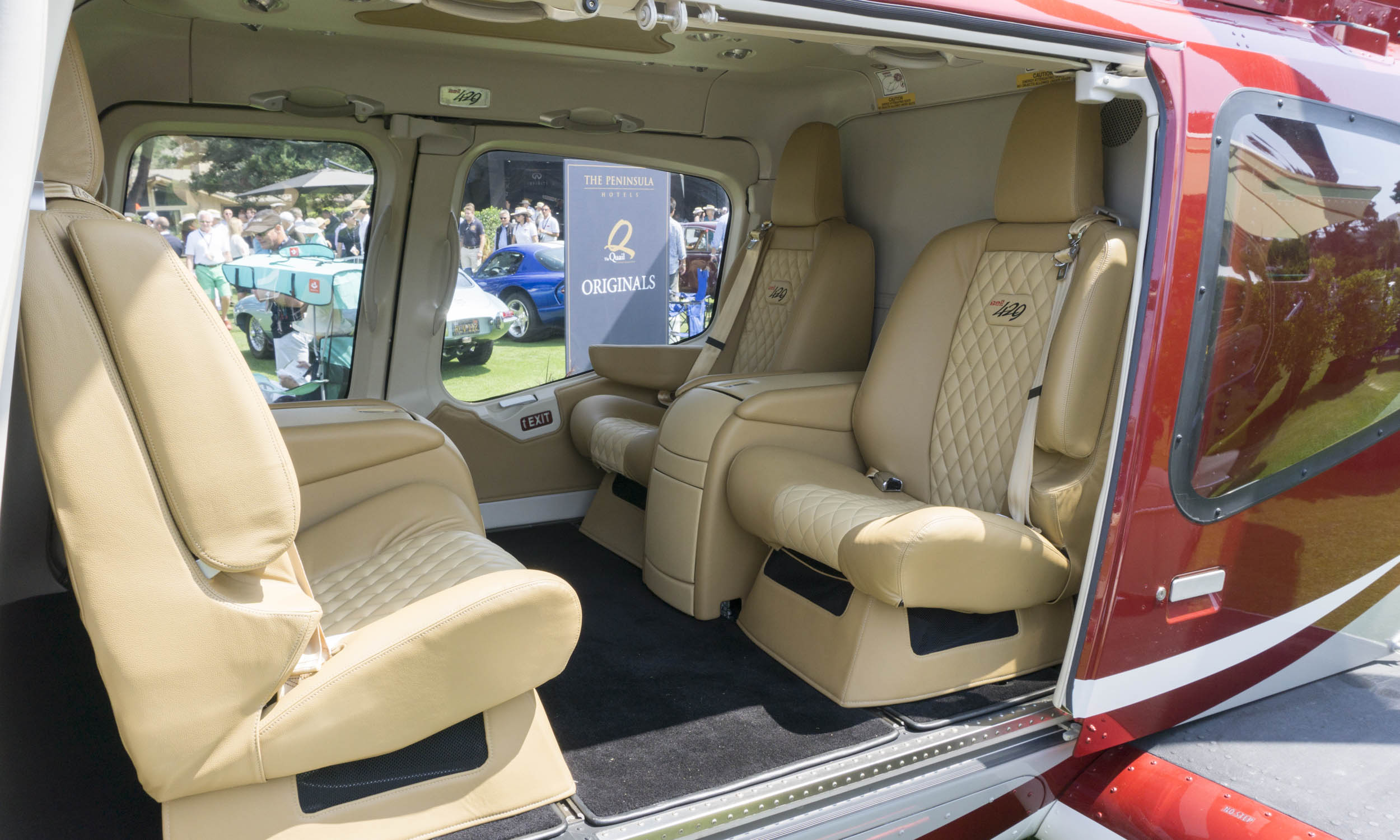 Bell 429 WLG
Standard seating offers space for up to seven passengers in addition to the pilot; however, there many options when it comes to outfitting the interior. The example on display at the Quail features a VIP option, which provides luxury seating for four with an armrest and console between each pair of seats. A hinged sliding door on each side makes for easy entry and exit, and a separate compartment stores up to 74 cubic feet of luggage.