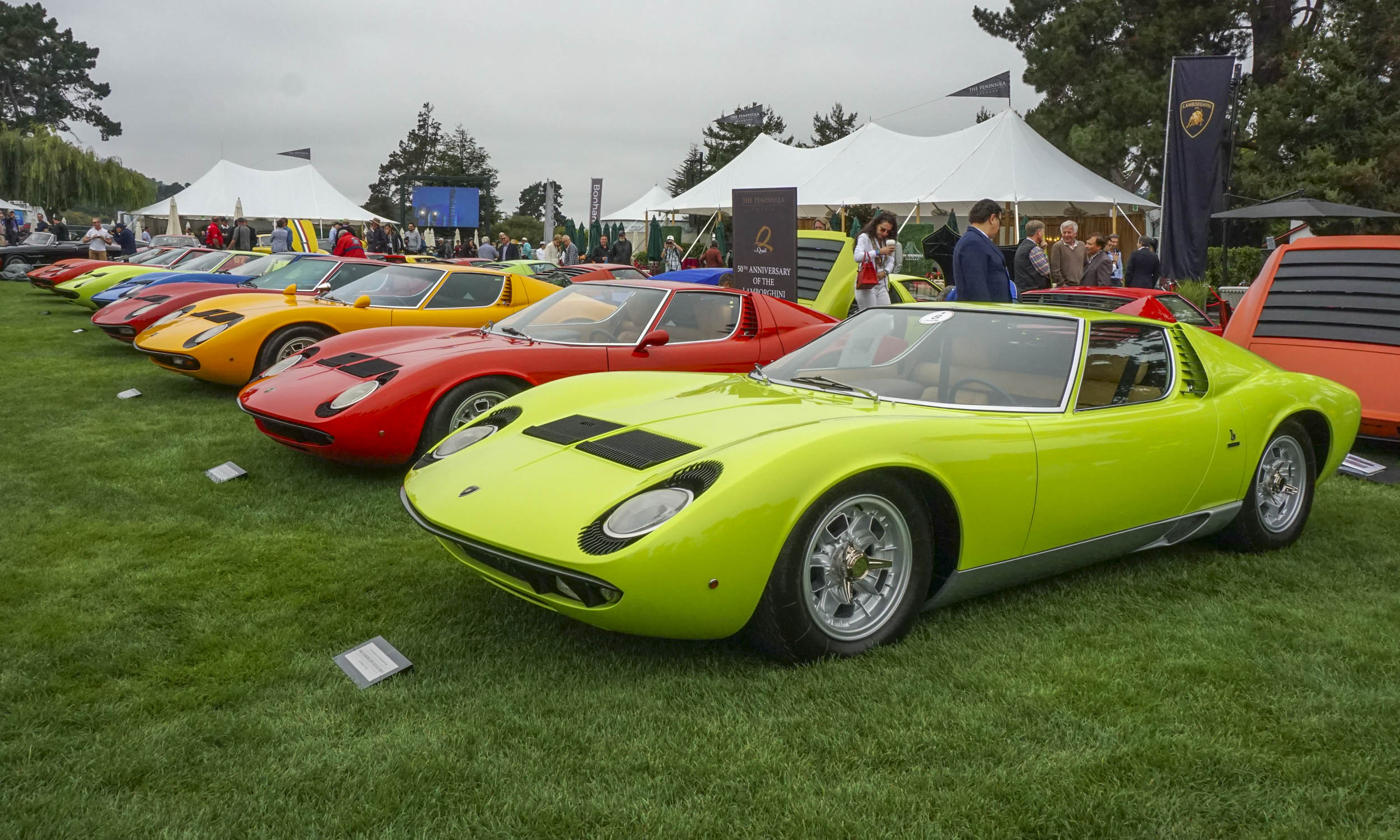 Cars and Cuisine
Every August during Monterey Car Week a number of signature events lead up to the Pebble Beach Concours d’Elegance, and every year one of our favorites is The Quail, A Motorsports Gathering. Why a favorite? Perhaps it’s the wide variety of vintage and rare automobiles, or maybe it’s the amazing gourmet food available throughout the grounds. Considering our love for beautiful cars and good food, it’s probably both. And since this site dishes on delectable autos rather than haute cuisine, let’s appreciate some of the finer automotive highlights sampled during this year’s gathering at The Quail Lodge. 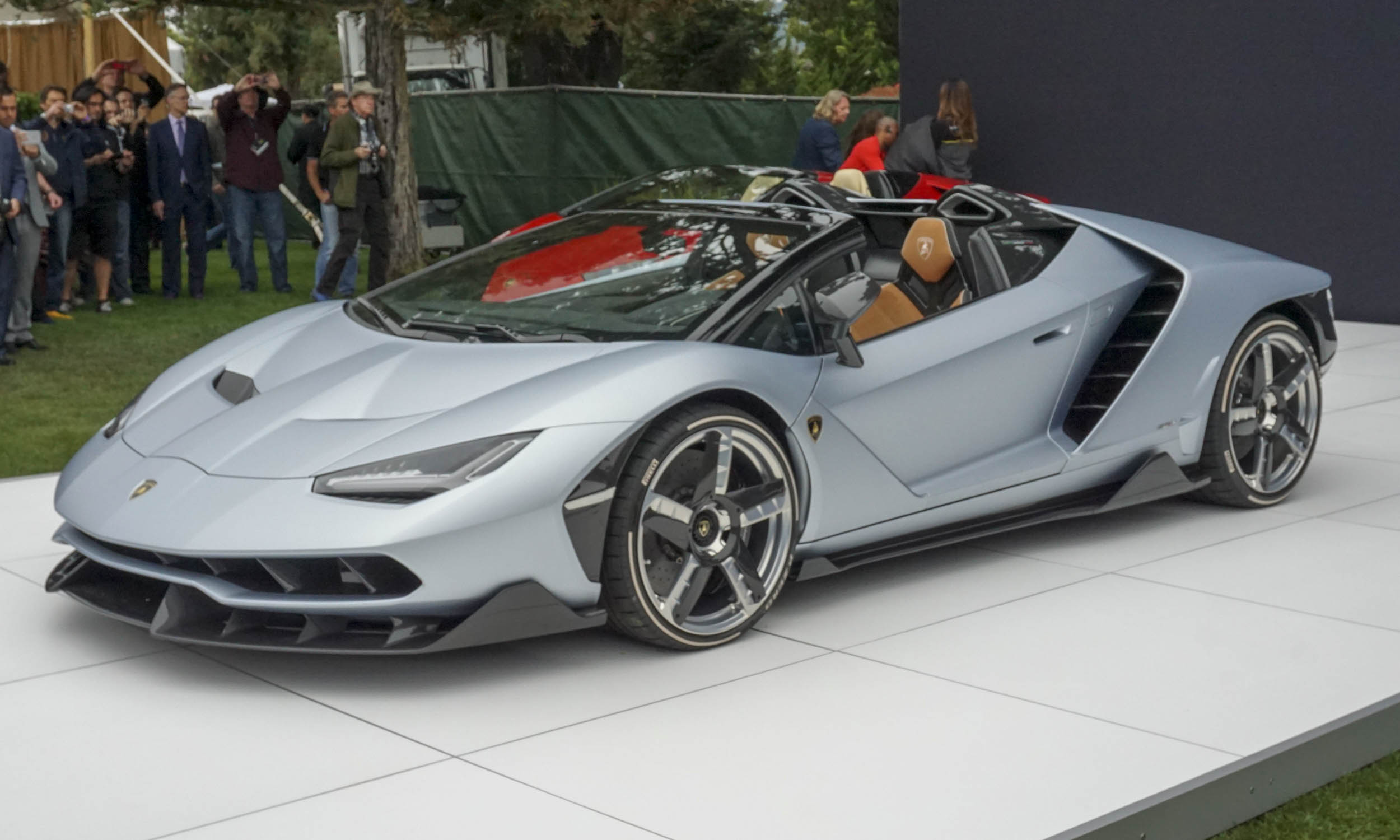 Lamborghini Centenario Spider
Celebrating 100 years since the birth of company founder Ferruccio Lamborghini, the Italian manufacturer has created this extreme Centenario sports car in his honor. The Centenario coupe debuted at the Geneva Motor Show earlier this year, and the open-top version appeared for the first time ever at The Quail. Only 20 coupes and 20 roadsters will be built but there’s no point in asking about the price, because all 40 have already been reserved. Centenario boasts a 770-horsepower V12 engine — the most powerful engine Lamborghini has ever produced. 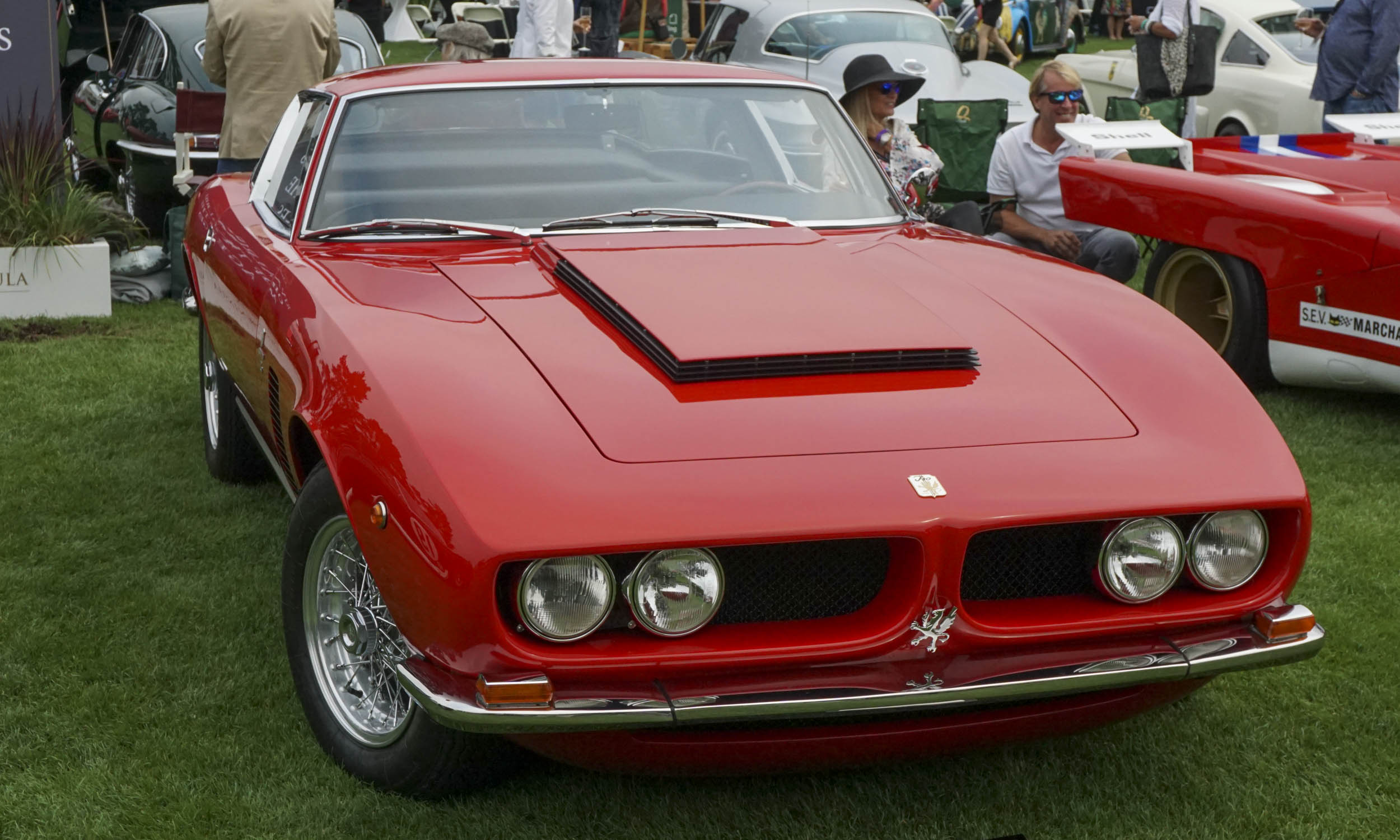 1969 Iso Grifo 7 Litre
In the late 1960s Italian car company Iso built sport coupes designed to compete with Ferrari and Maserati; however, the stylish cars were fitted with American powerplants. The Iso Grifo 7 Litre makes use of a Chevrolet 427 cubic-inch V8 putting out 435 horsepower — enough oomph to move the Grifo to a top speed around 180 mph. Only 66 of these rare automobiles were built. 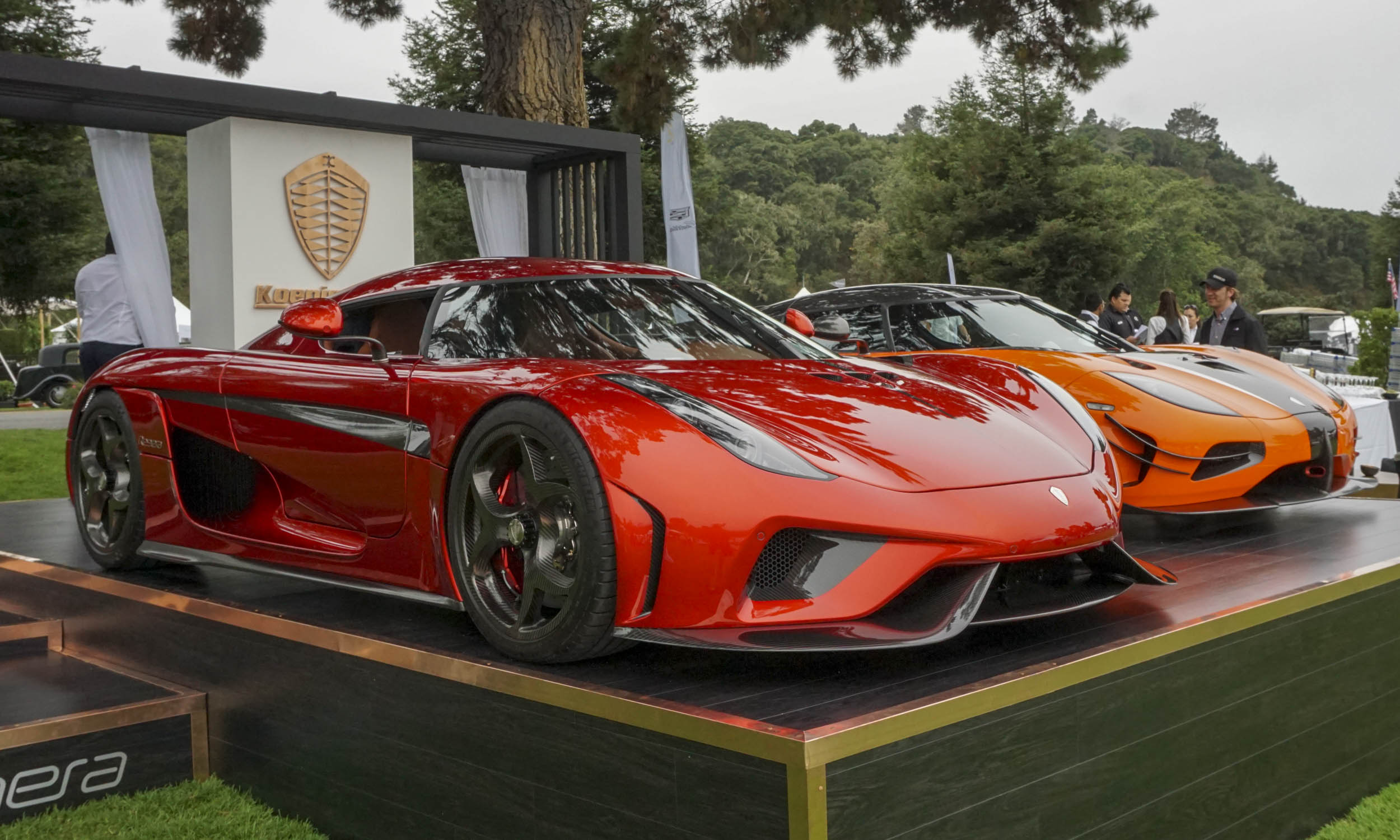 Koenigsegg Regera
Swedish car company Koenigsegg brought its latest supercar — the Regera — to The Quail this year. Designed to be more luxurious than the company’s typically extreme offerings, the Regera features memory-foam-filled power seats, a 9-inch display screen, Wi-Fi connectivity, Apple CarPlay and ambient lighting. Although the Regera may possess more comfort and convenience than prior Koenigseggs, it still offers mind-blowing performance: 60 mph arrives in a mere 2.7 seconds and — even more impressive — it takes only 20 seconds to be travelling 250 mph. 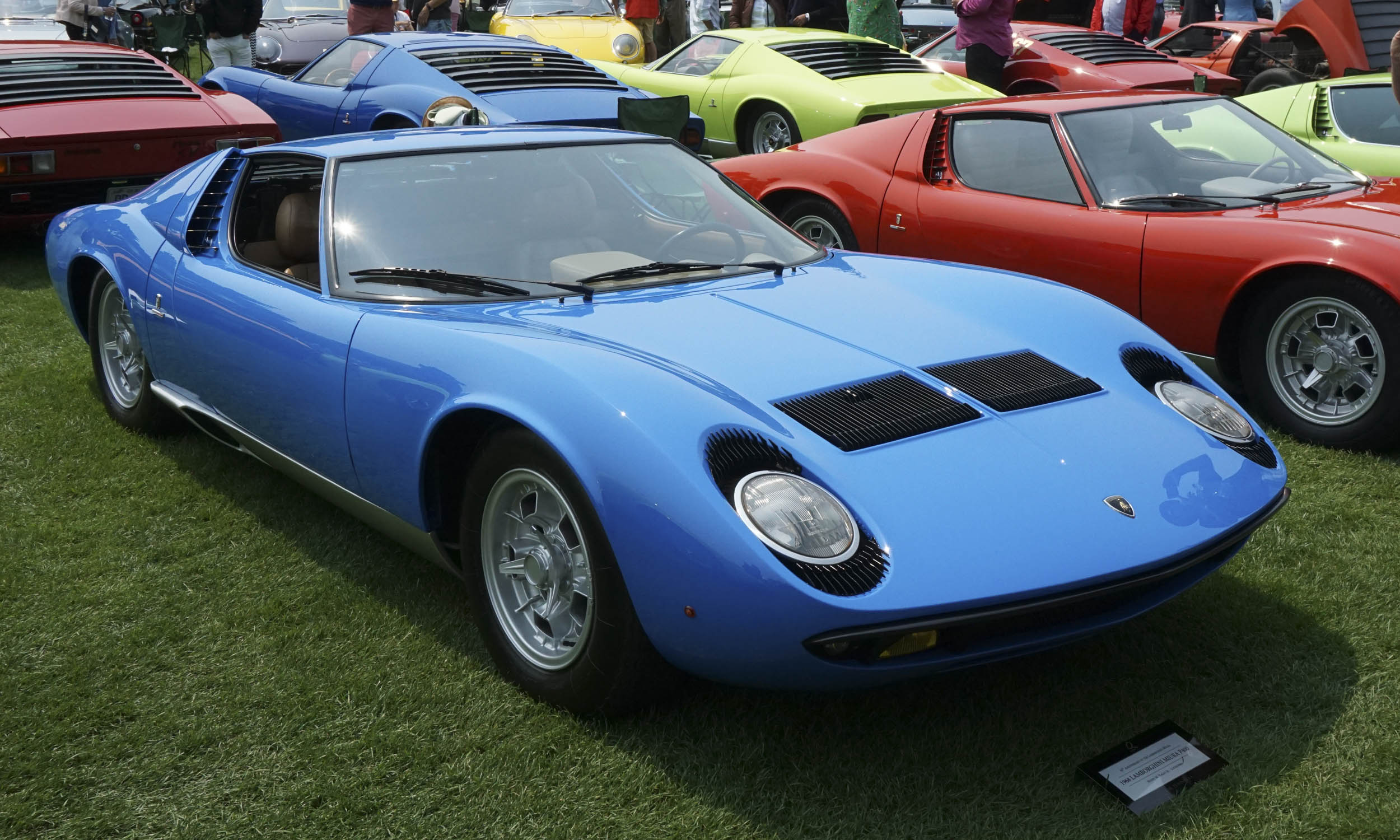 Lamborghini Miura
A mere 50 years ago Lamborghini introduced what many automotive pundits consider to be the first supercar — the Miura. Named after a Spanish fighting bull, Miura is powered by a 4.0-liter V12 engine located behind the passenger compartment. Initial output was rated at 350 horsepower, eventually growing to 385 horses in the 1971–72 Miura SV. Seeing almost two dozen Miuras presented together at The Quail is a vision not soon forgotten. 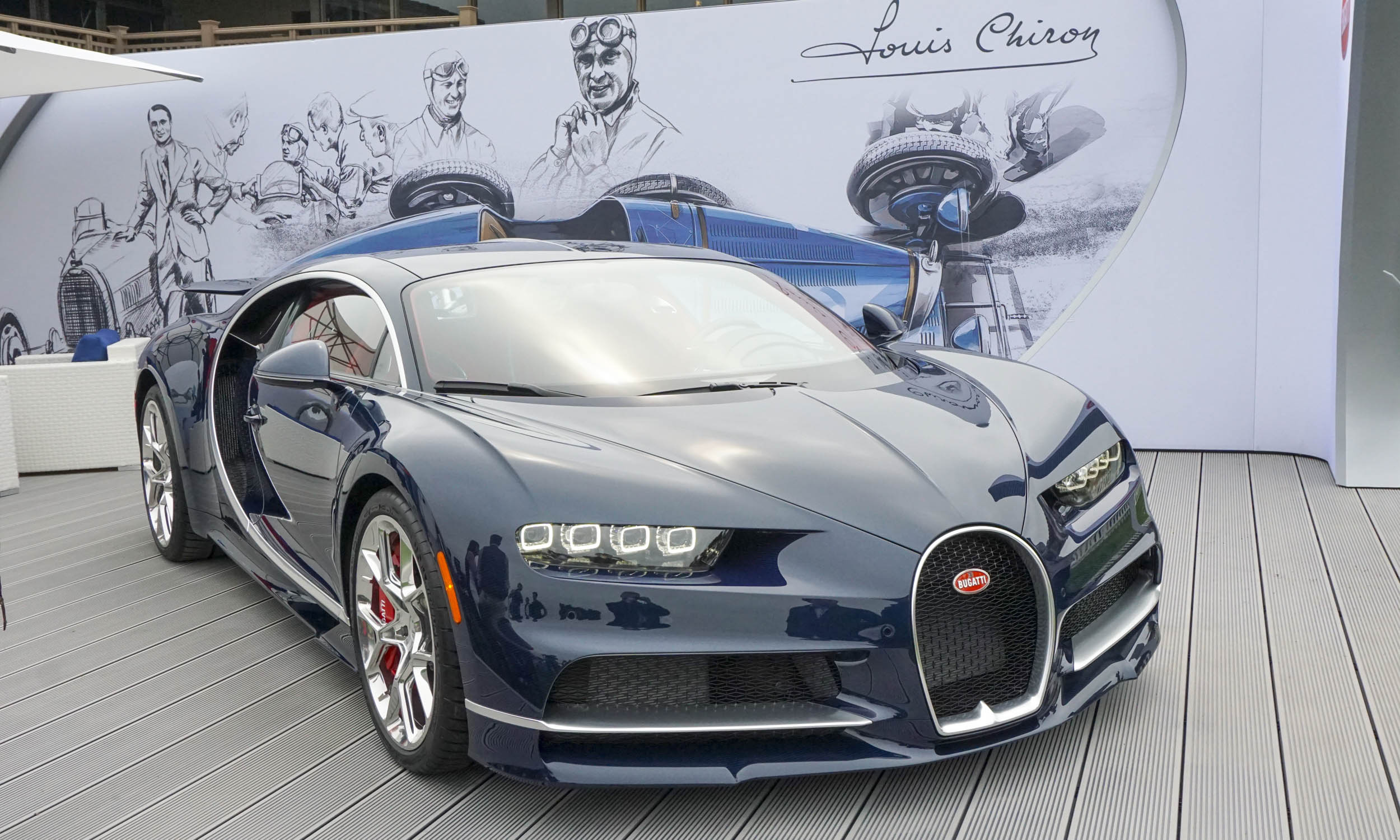 Bugatti Chiron
With more than 1000 horsepower, Bugatti’s Veyron is one of the most powerful and fastest machines on the road, but its years of media buzz and moments in the sun have passed, so Bugatti has created an appropriate successor. The new Chiron commanded plenty of attention at The Quail, even with a half-dozen Veyrons parked beside it. Powering the Chiron is a newly-developed 8.0-liter quad-turbo W16 engine producing 1500 horsepower and an insane 1180 lb-ft of torque — available as low as 2000 rpm. The Chiron reaches 62 mph in less than 2.5 seconds, 124 mph in around 6.5 seconds and — most amazing of all — 186 mph in less than 13.6 seconds. Good for more than just straight-line speed, this super sports car can achieve 1.5 g in lateral acceleration, and with new high-performance carbon-ceramic brakes the Chiron can come to a full stop from 62 mph in a bit over 100 feet. 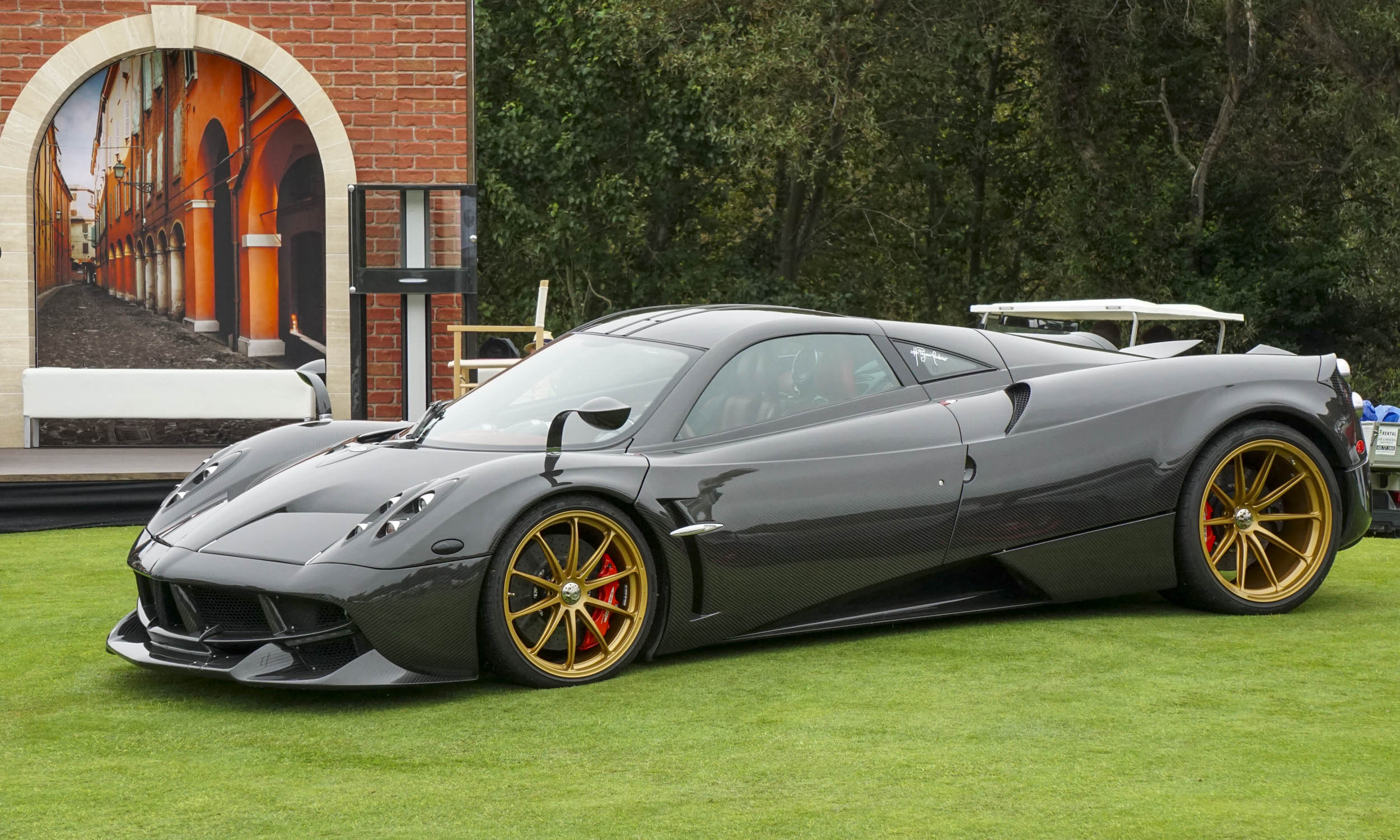 Pagani Huayra
If a Lamborghini or Ferrari is a bit too pedestrian for your tastes, perhaps a Pagani Huayra would best please your palate. Looking unlike anything else on the road, the Huayra is an extreme sports car that makes use of a unique active aero system — four flaps at the front and back of the car automatically actuate to increase downforce or reduce drag depending on the situation. The Huayra’s 730 horsepower comes from a special hand-built twin-turbo 6.0-liter Mercedes AMG V12 engine. Sixty mph comes up in about 3 seconds and (almost as impressive) the Huayra can get back to zero in 2 seconds. 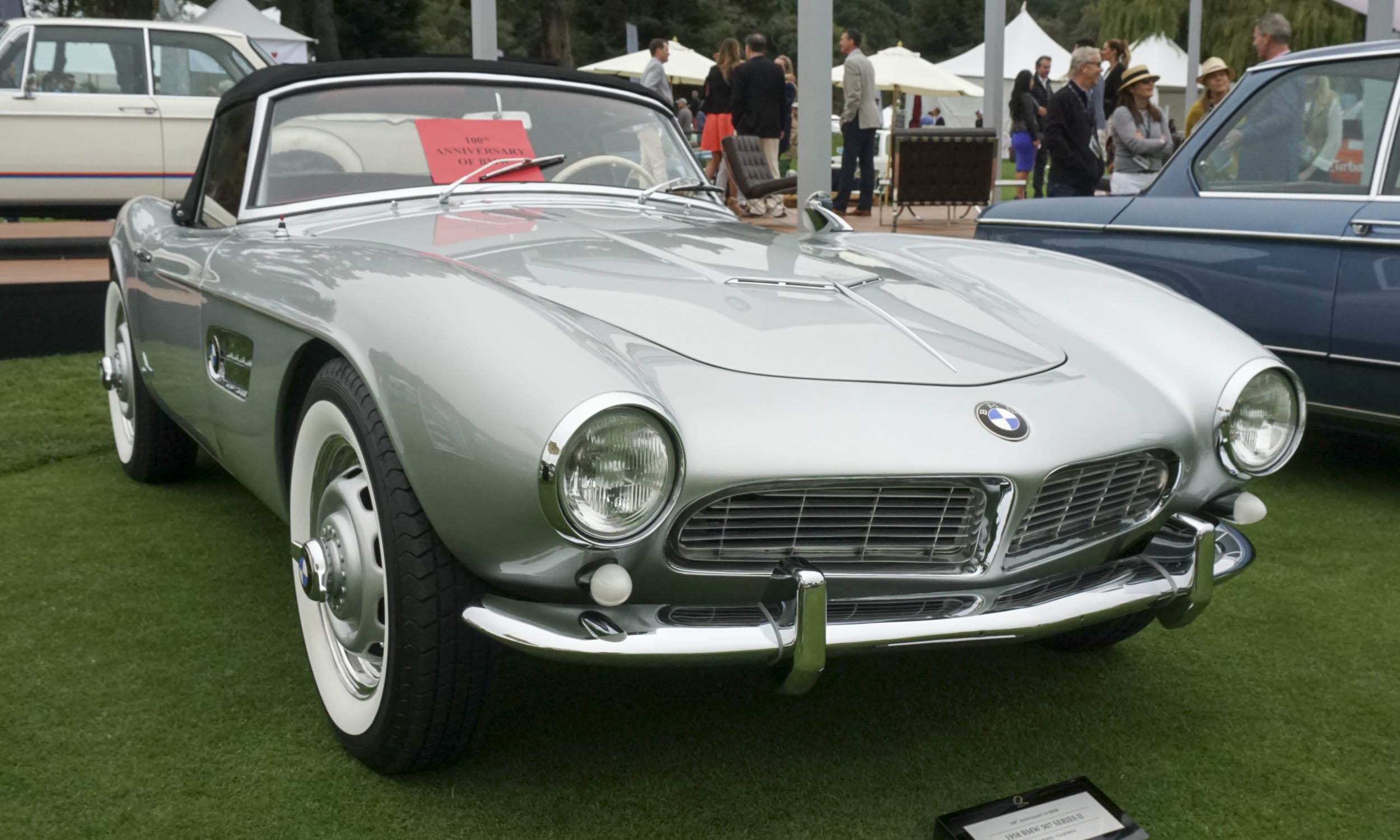 BMW 507
This iconic BMW roadster is a rare sight — not surprising, since only about 250 were ever built. The brainchild of New York-based automobile importer Max Hoffman (also credited with the idea for the Mercedes-Benz 300SL), the 507 was in production from 1956–59 and was designed primarily for the American market. Originally the intent was to sell much greater numbers at a price around $5,000, but production costs ended up doubling the retail price, and with sales lower than anticipated the company lost money on every vehicle sold. Notable 507 owners include Elvis Presley, actress Ursula Andress and racing drivers Hans Stuck and John Surtees. Presently the cars are worth quite a bit more; one sold at auction in 2014 for $2.4 million. 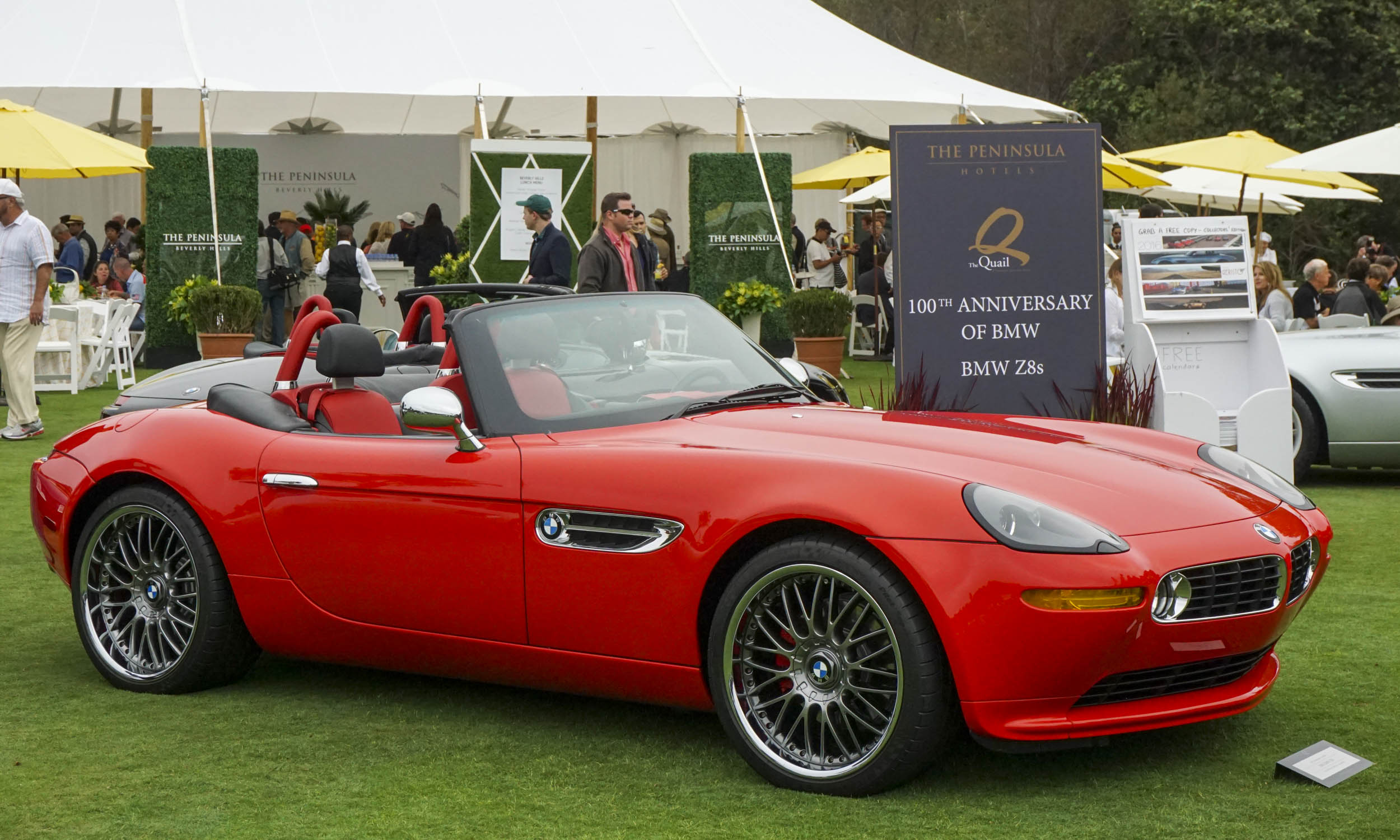 BMW Z8
Considered the modern successor to the 507 when it was introduced in 1999, the Z8 carries some of the same design language as the original 507. Designed by Henrik Fisker, the limited-production roadster features a 4.9-liter V8 engine putting out 400 horsepower, providing the capability to sprint to 60 mph in about 4.5 seconds. In a nod to BMW’s 100th anniversary, The Quail featured a special display of BMW Z8s at the 2016 event. 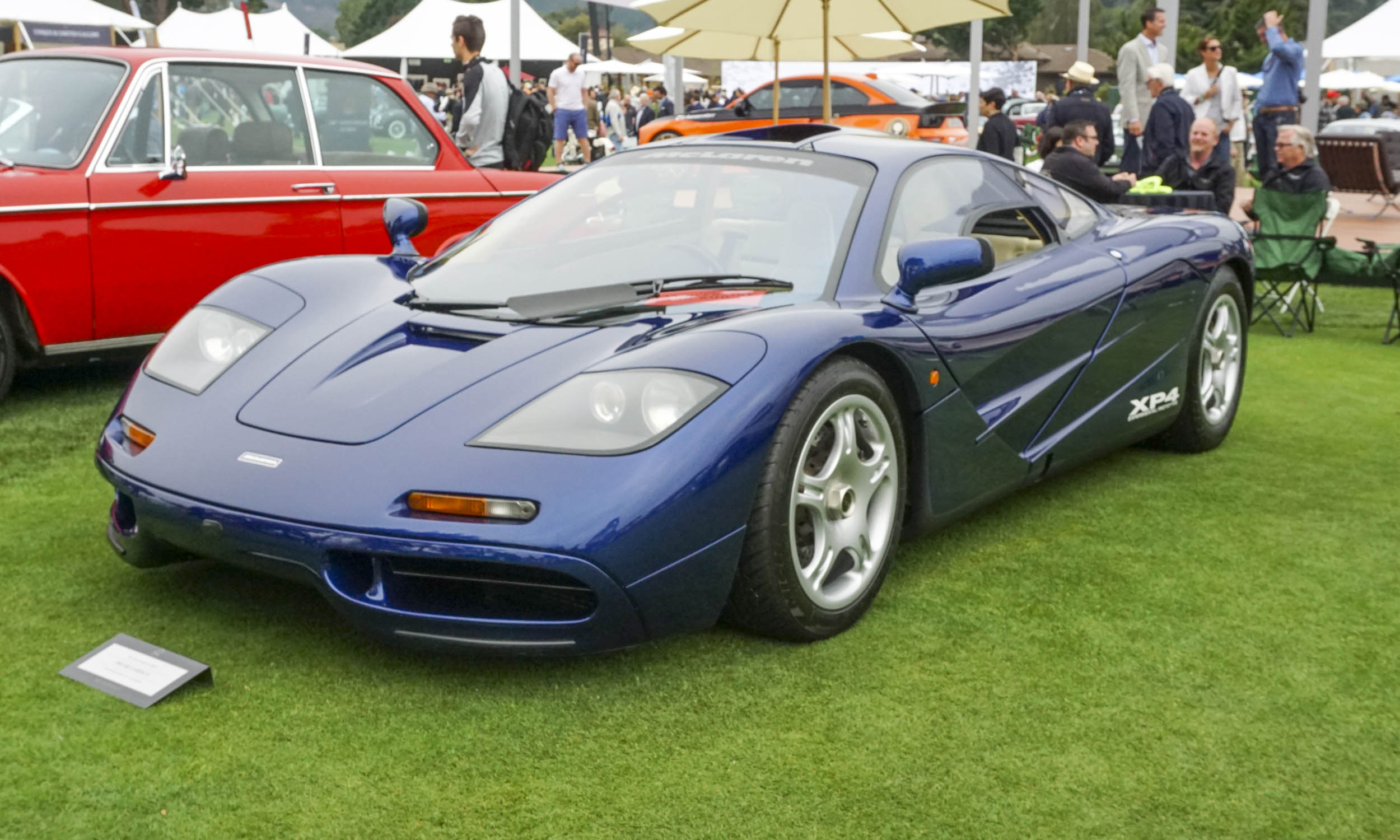 1993 McLaren F1 XP4
Among car enthusiasts the McLaren F1 is legendary. In 1998 the F1 became the world’s fastest production car by topping 240 mph. That record would stand for almost 10 years until the Bugatti Veyron was able to achieve 253 mph. This particular F1 is one of five prototypes; ultimately 106 F1s were built in a numbers of configurations. Power comes from a special BMW-built V12 engine putting out 618 horsepower. Another thing that sets the F1 apart from every other car on the road is its occupant configuration — it seats three, with the driver sitting in the center and a passenger seat slightly aft on either side. 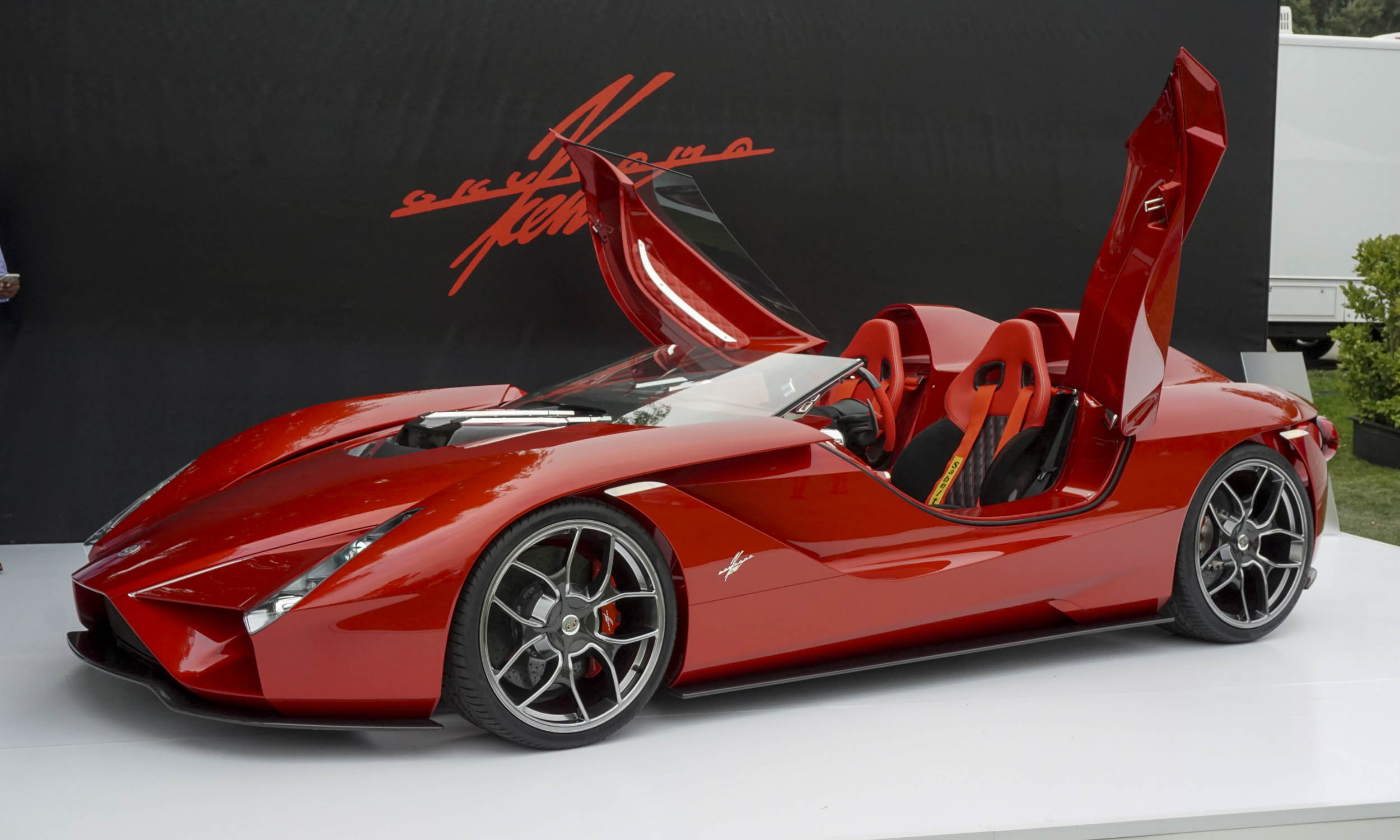 Kode57 Enji
Designer Ken Okuyama has had a hand in a number of well-known vehicles such as the Ferrari Enzo, Porsche 911 and Maserati Quattroporte, but at this year’s Motorsports Gathering Okuyama brought something new. The Kode57 Enji is clearly a supercar with sweeping lines and a gorgeous interior. We’re told that the Kode57 will feature a 6.0-liter V12 engine putting out more than 600 horsepower. Just five are expected to be built, and rumor has it that boxer Floyd Mayweather has already secured one for $2.5 million.