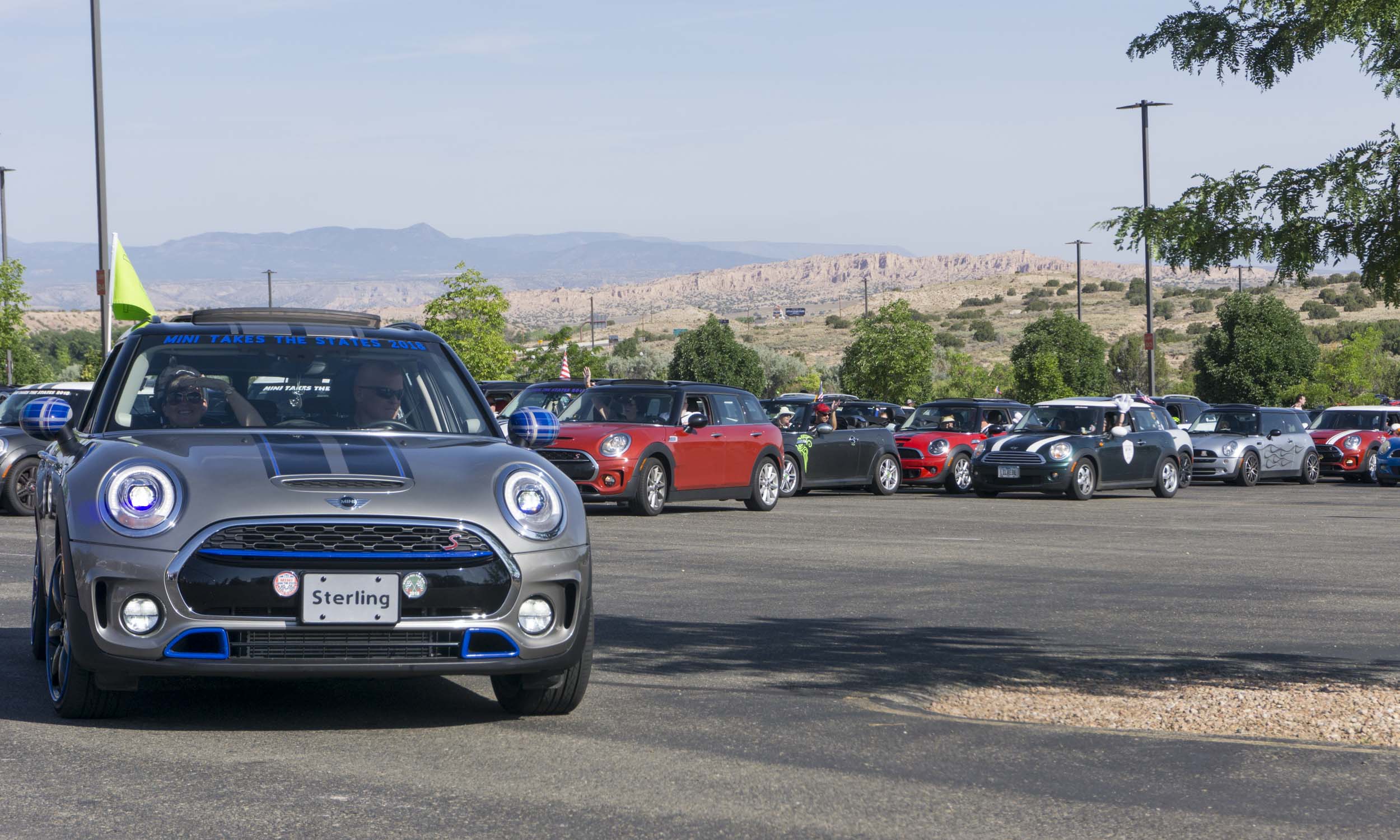 Kinship of Car Ownership
Americans typically use cars as convenient conveyance — getting from point A to point B. They need a car to get to work, to the store or to pick up kids from school. Beyond that, perhaps an occasional road trip. And when folks drive high-volume vehicles such as a Honda Accord or Ford Focus , they don’t necessarily feel a connection with other Accord or Focus drivers. However, if they drive a MINI, they often wave and smile when passing other MINI owners, because buying a MINI is a bit like joining a club (or a cult, depending on your point of view). 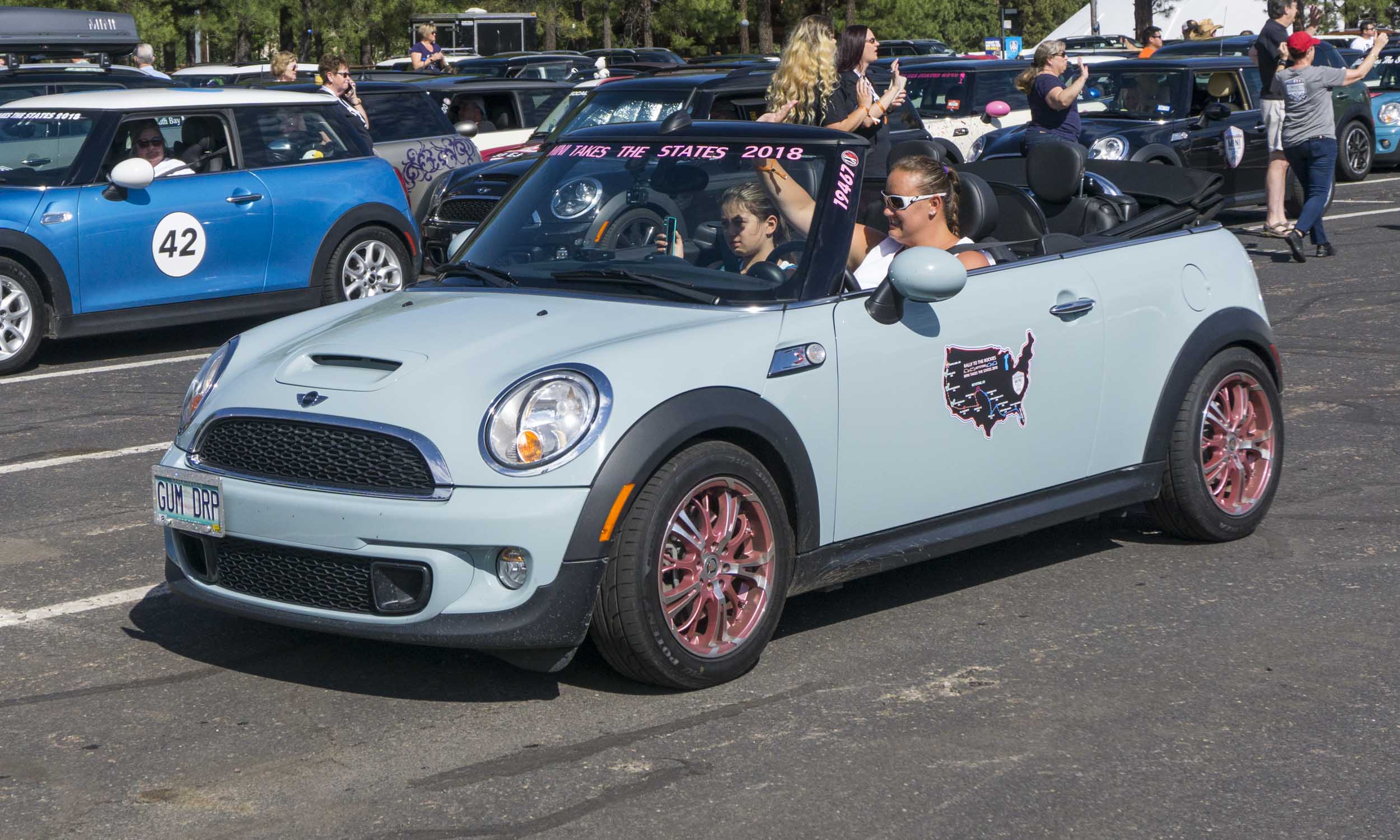 MINI Takes the States
In no place is this kinship among MINI owners clearer than at a biennial event called MINI Takes the States. These gatherings draw MINI loyalists from all areas of the country. Sponsored by MINI USA, this themed road rally / celebration has taken place every two years since 2006. The first event was a cross-country trek from Monterey, California, to Lakeville, Connecticut, which took 15 days. Each event since has had slightly different routes and plans, but the general idea is to gather MINI owners to celebrate the vehicles they truly love. 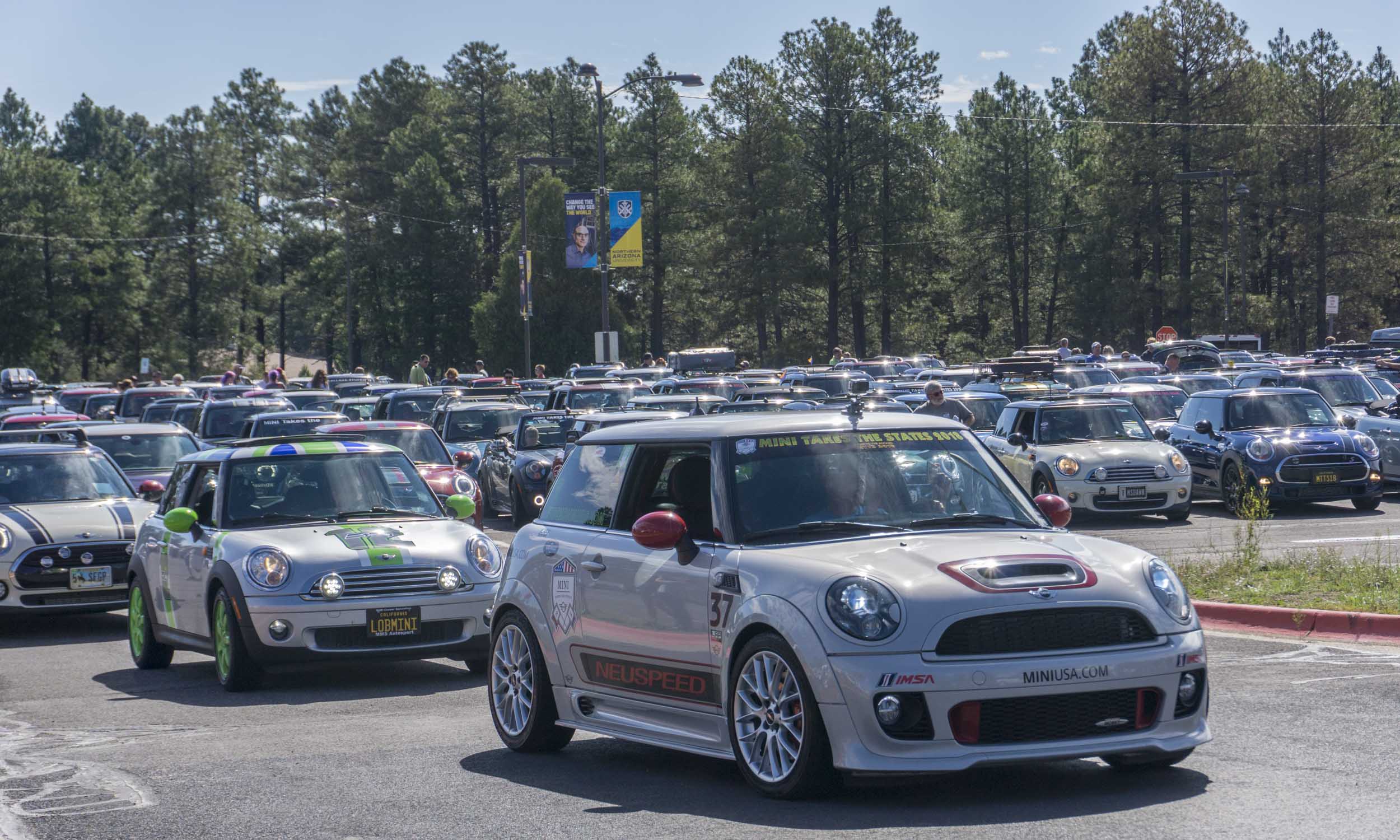 MINI Community
“Great things happen when the MINI community comes together, and this year is sure to be another unforgettable experience,” said Vice President of MINI Americas Region Thomas Felbermair. “MINI TAKES THE STATES is the ultimate opportunity for MINI owners to enjoy the famous go kart handling and performance of their MINI as they travel through America’s scenic backroads and byways.” 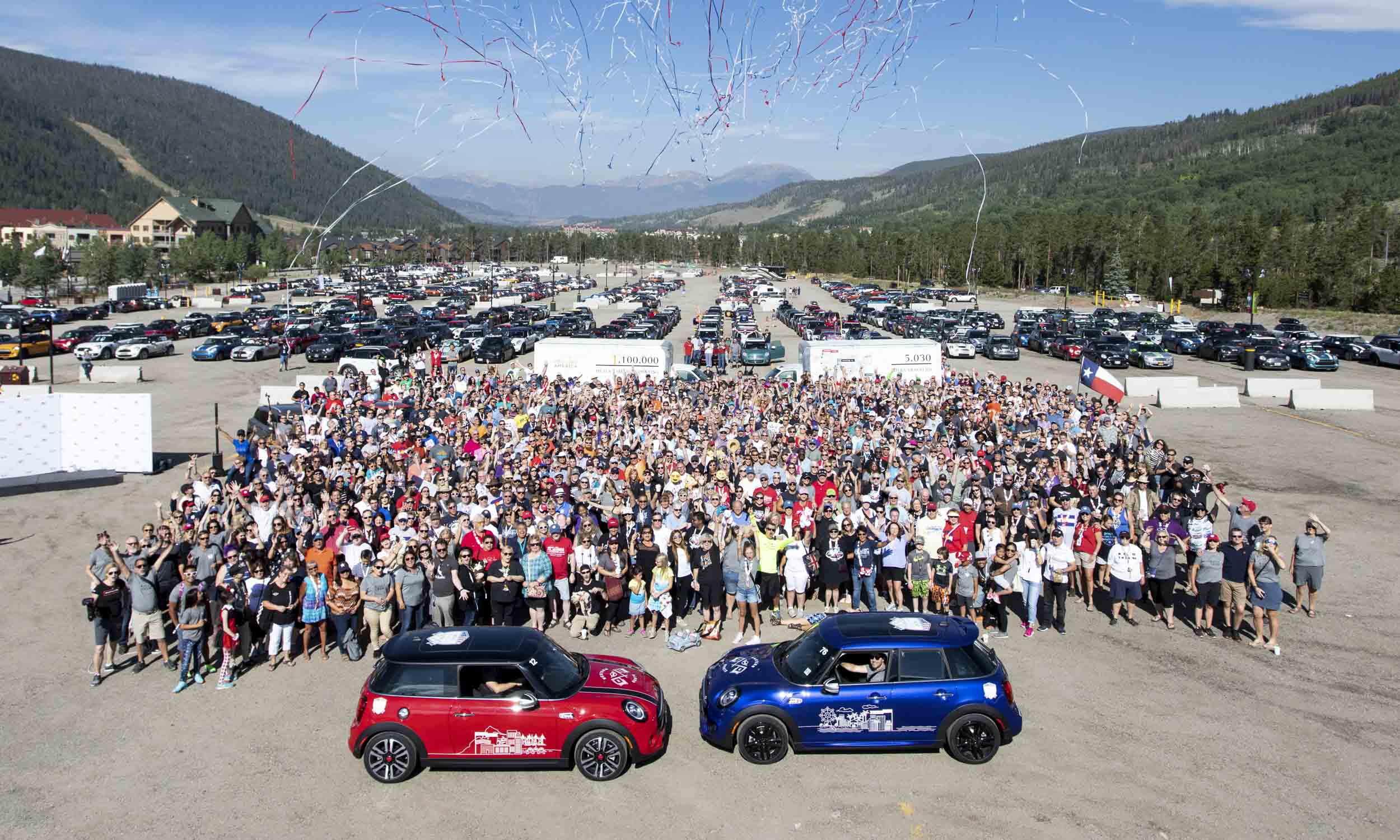 East Meets West
For 2018 MINI USA created two routes — one leaving from Orlando, Florida, and the other from Portland, Oregon. Hundreds of MINIs departed from each location heading inland, eventually meeting in Keystone, Colorado. Over the course of nine days, the rally covered more than 5,000 miles through 14 states by more than 1,000 MINIs. 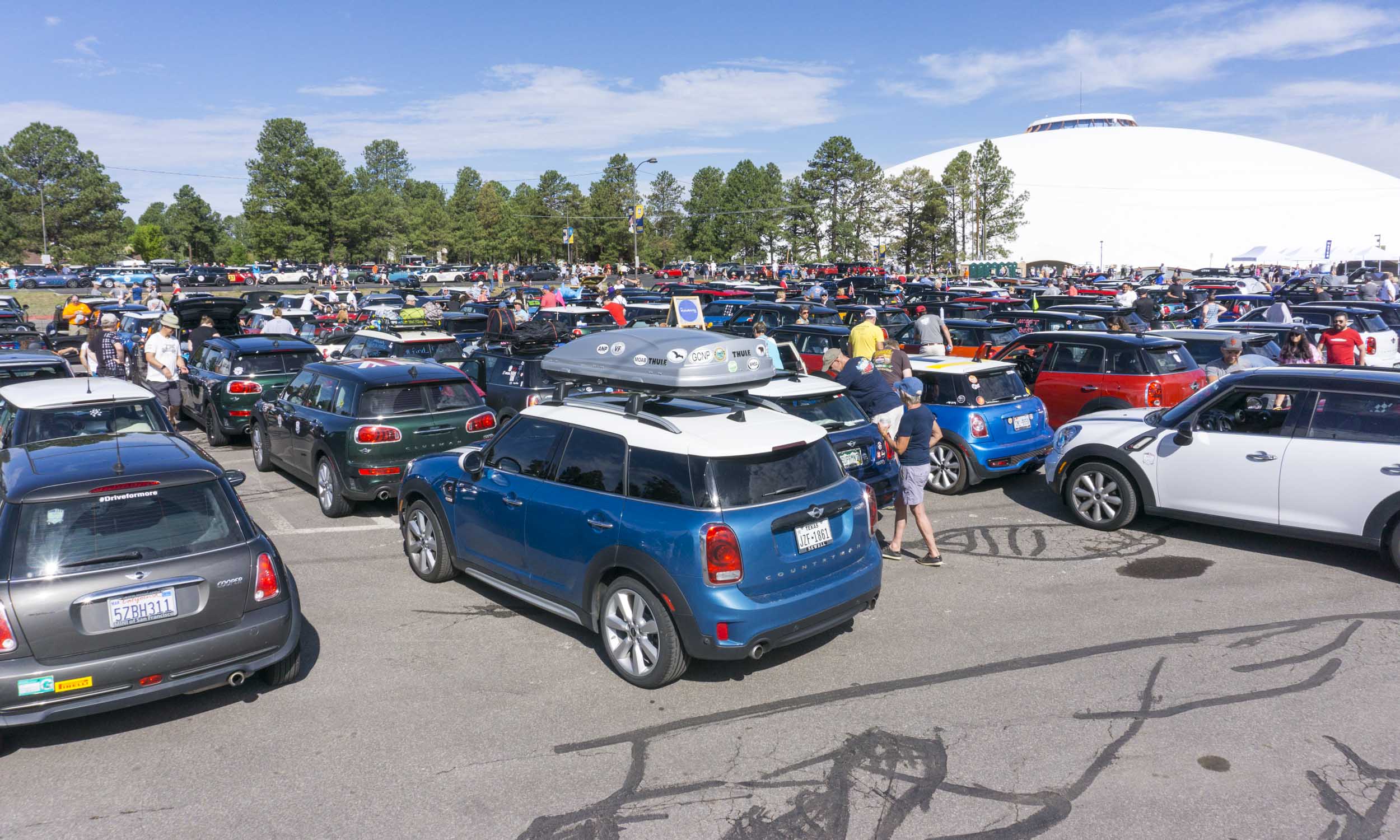 Unique Event
Americans love their cars, and there are lots of car clubs around the U.S. for specific brands and models, but the MINI Takes the States rally is unique in that it is sponsored and organized by the car company. Not only does this keep the event on track and running smoothly, it gives MINI USA employees a unique opportunity to spend time with people buying their products. There’s no better focus group than spending a week with several hundred of your product’s biggest fans. Many owners have attended MTTS multiple times and absolutely love the chance to hang out with other MINI owners and see the country. 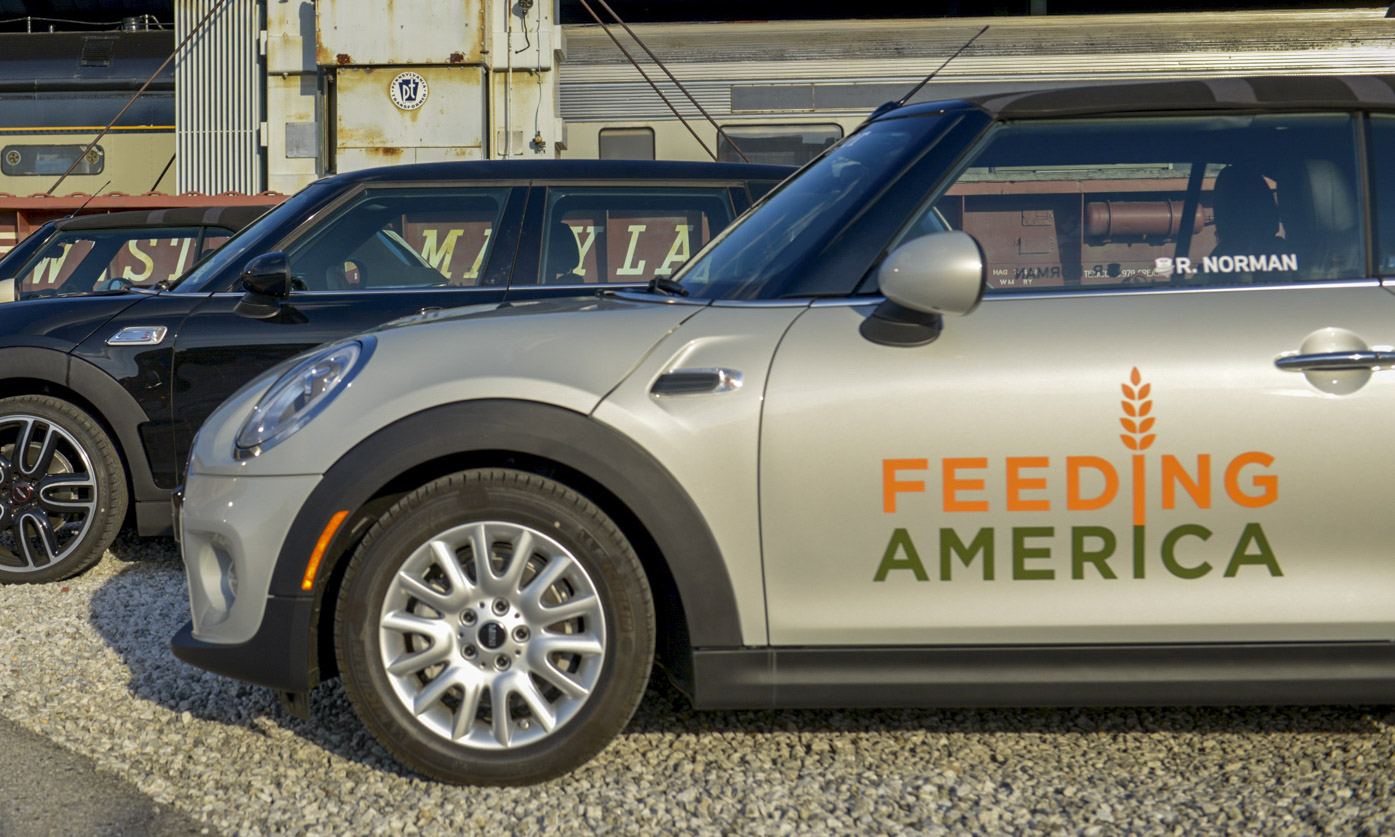 Feeding America
MINI Takes the States is about more than simply having fun. This time around MINI partnered with Feeding America for this nationwide rally to help battle hunger that exists all over the country. Not only was awareness of this important cause brought to light, donations along the way accounted for more than 1 million meals provided to Americans in need. 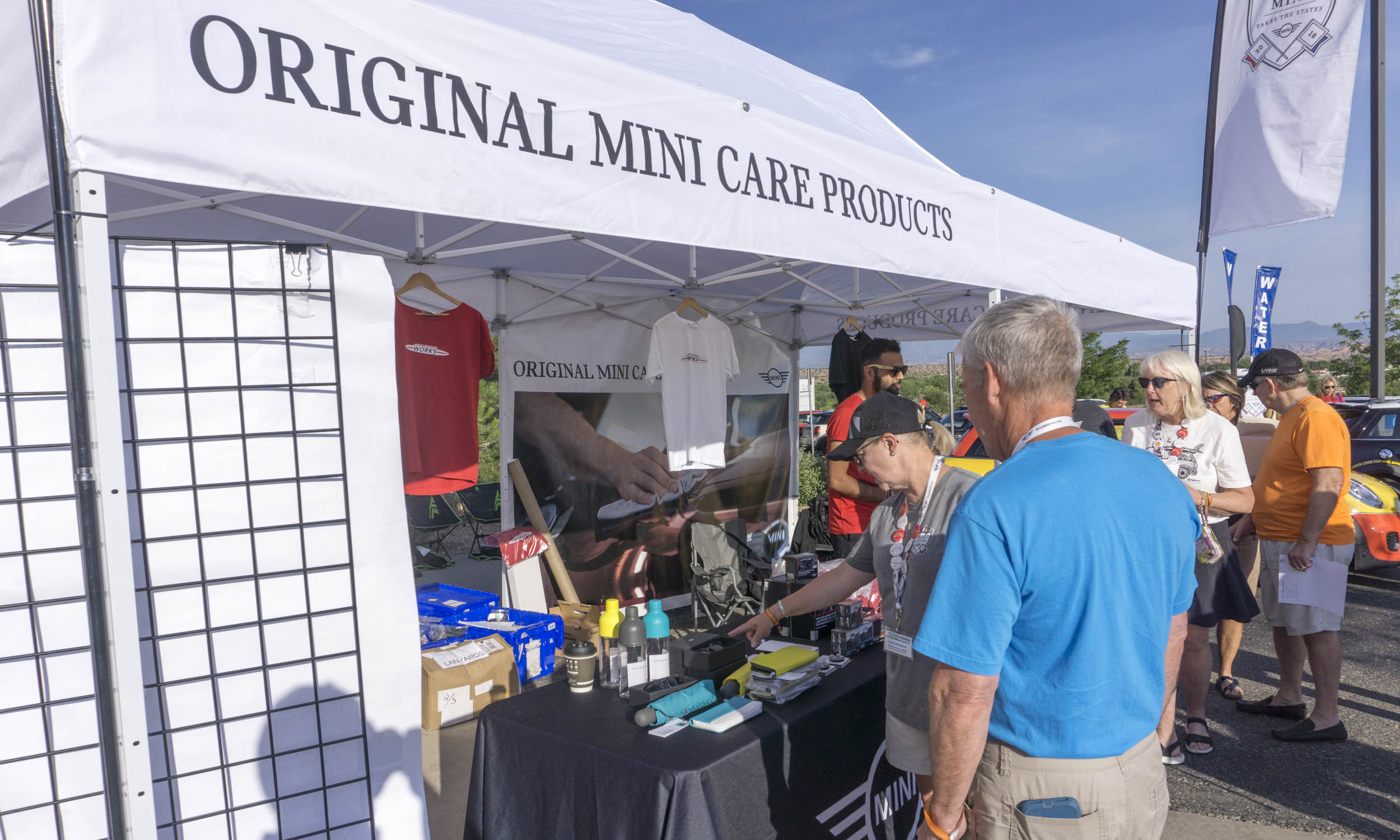 Rise and Rally
Each morning along the rally route, all participating MINIs gather in one location for Rise and Rally. Drivers and participants get together for breakfast, hear guest speakers, cheerfully commiserate about the day’s route, and peruse MINI accessories and paraphernalia prior to the day’s drive. MINI was kind enough to invite us to join the festivities for a few days, so we tagged along from Flagstaff, Arizona, to Durango, Colorado. 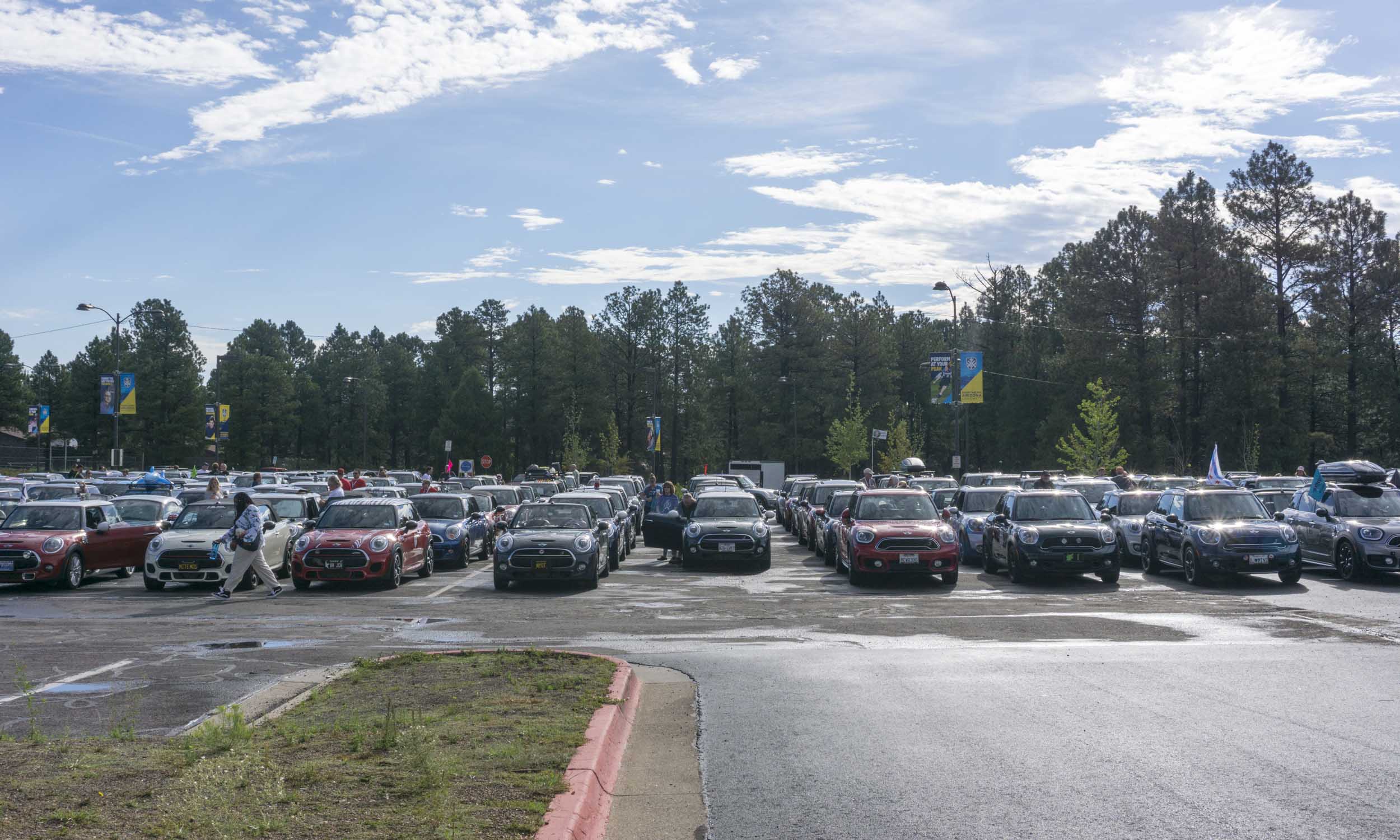 So Many MINIs
Walking through the sea of MINIs every morning was quite an experience — it seemed as if no two cars were alike. Most had some level of customization, ranging from a few stickers to a complete makeover. It’s as if these MINI owners look to their cars as an extension of their personalities, which makes for some rather entertaining, unique vehicles. Here are a few examples of some rather special MINIs participating along the route of the 2018 Mini Takes the States rally. 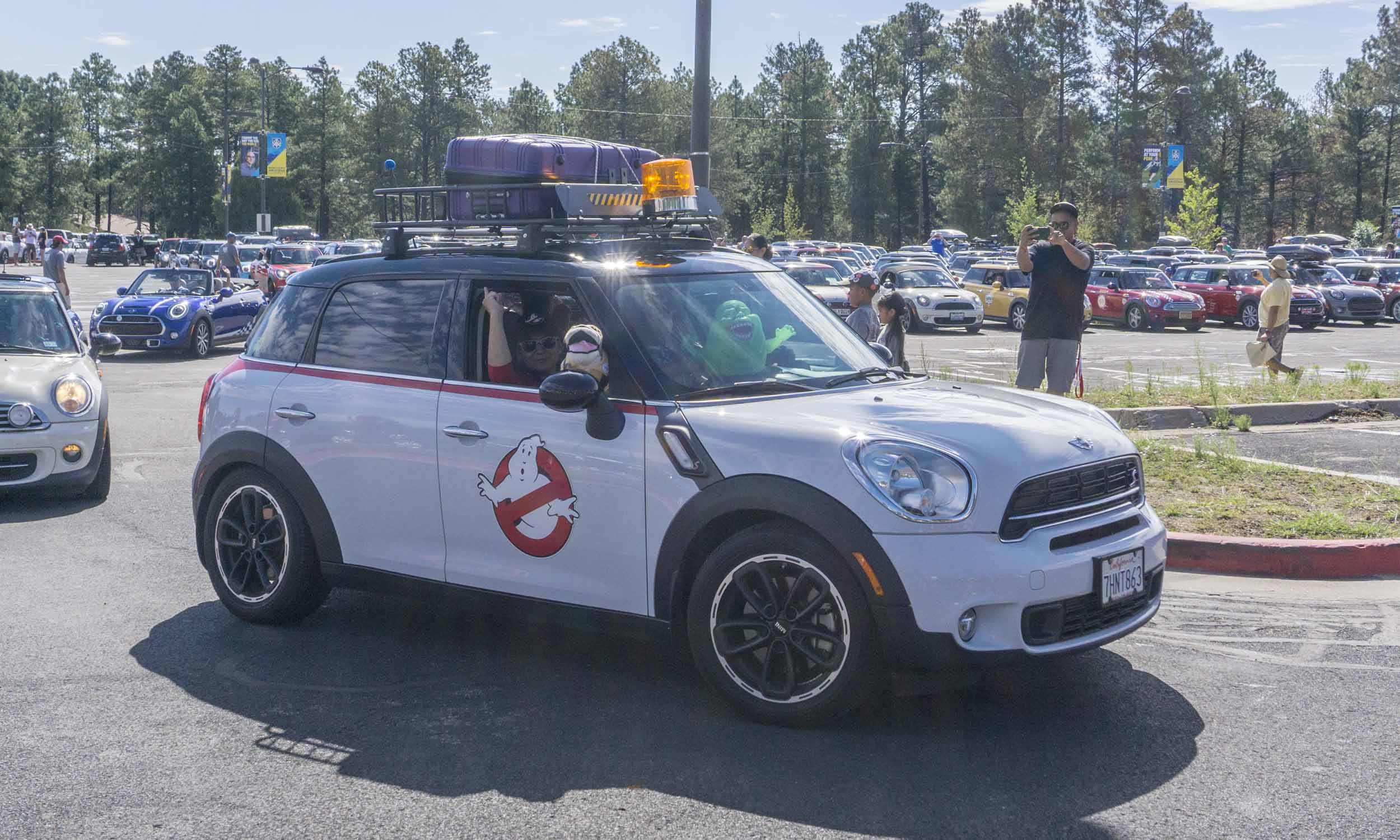 Ghostbusters MINI
Not exactly like the original, but this Ghostbusters MINI had the flasher on top, Slimer in the window and even the stuffed bulldog was wearing a proton-pack. 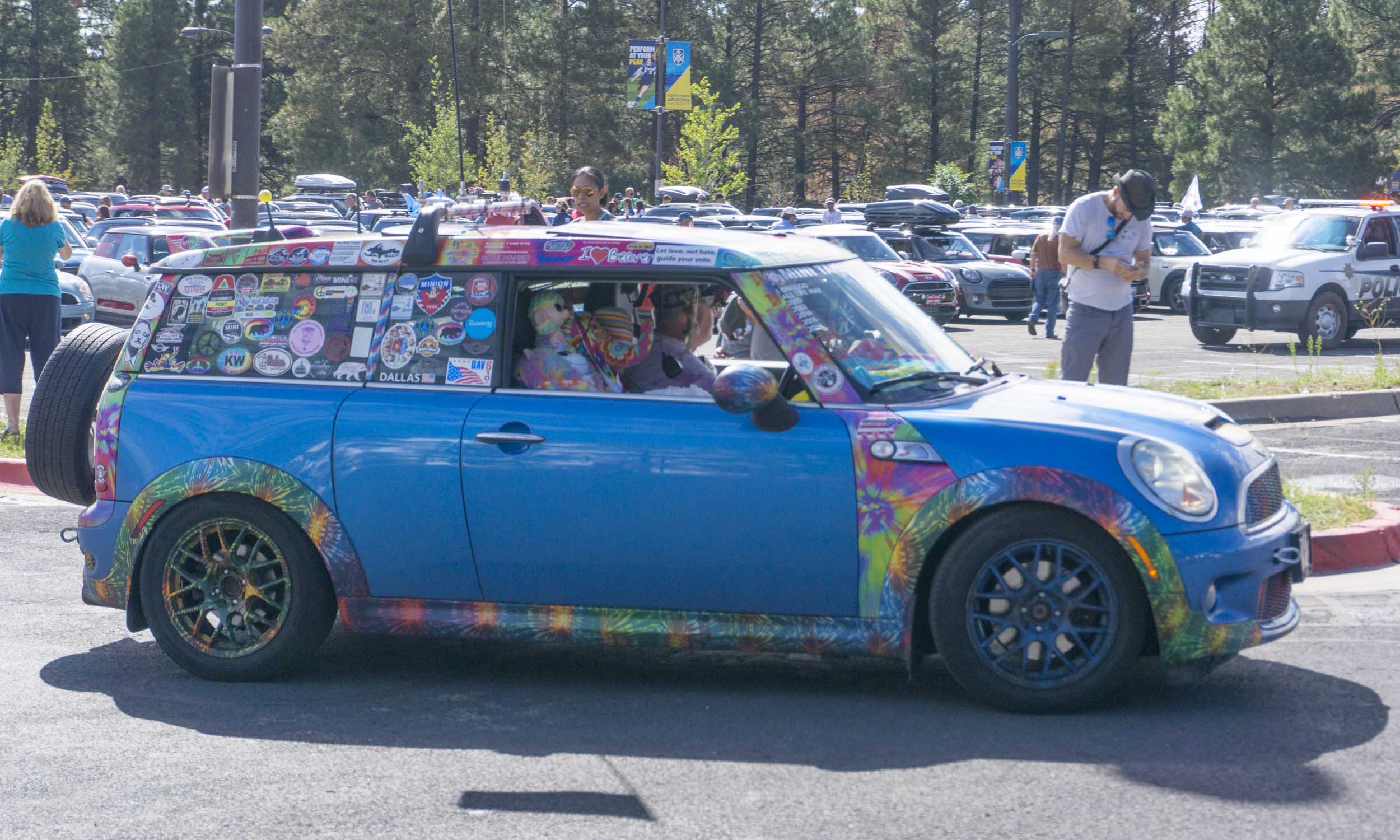 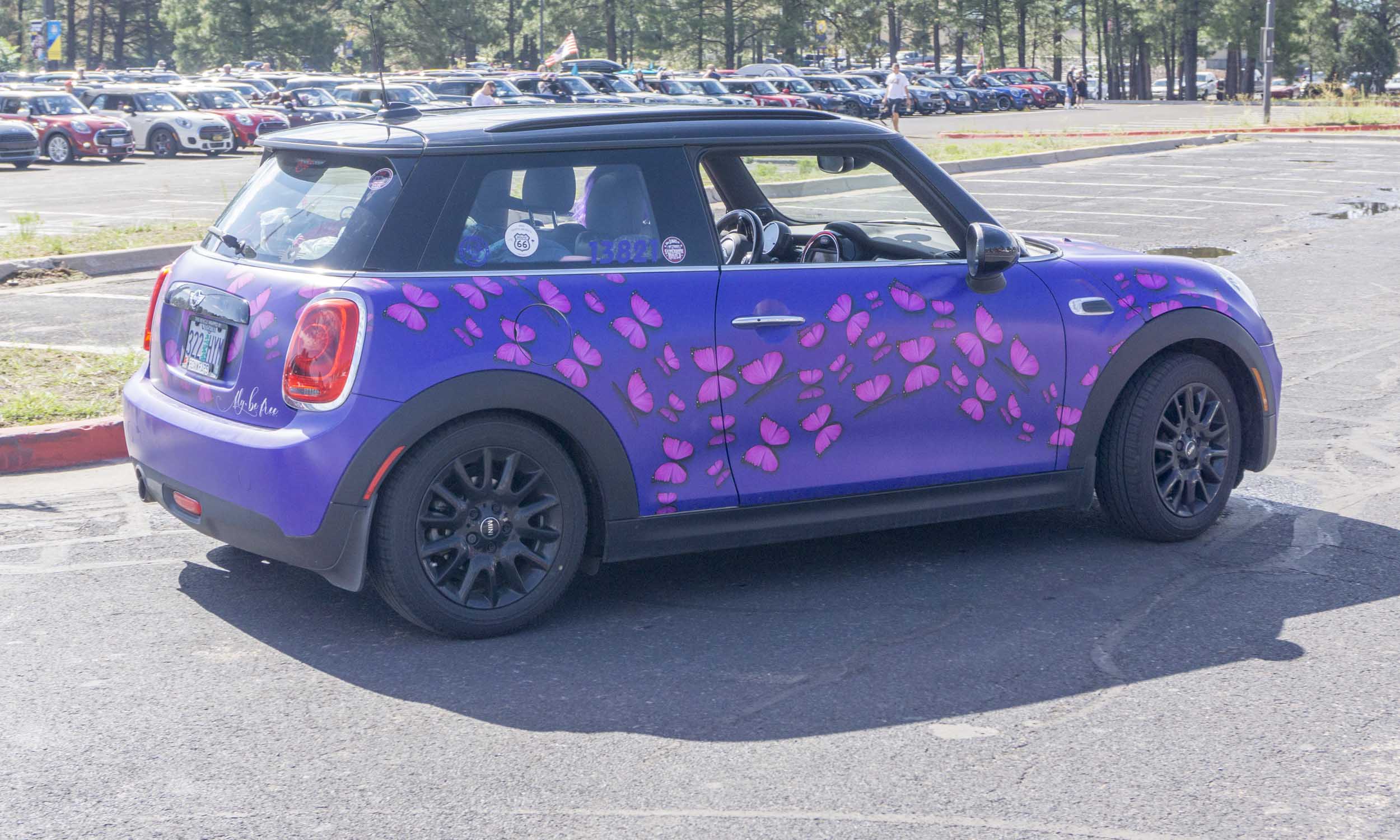 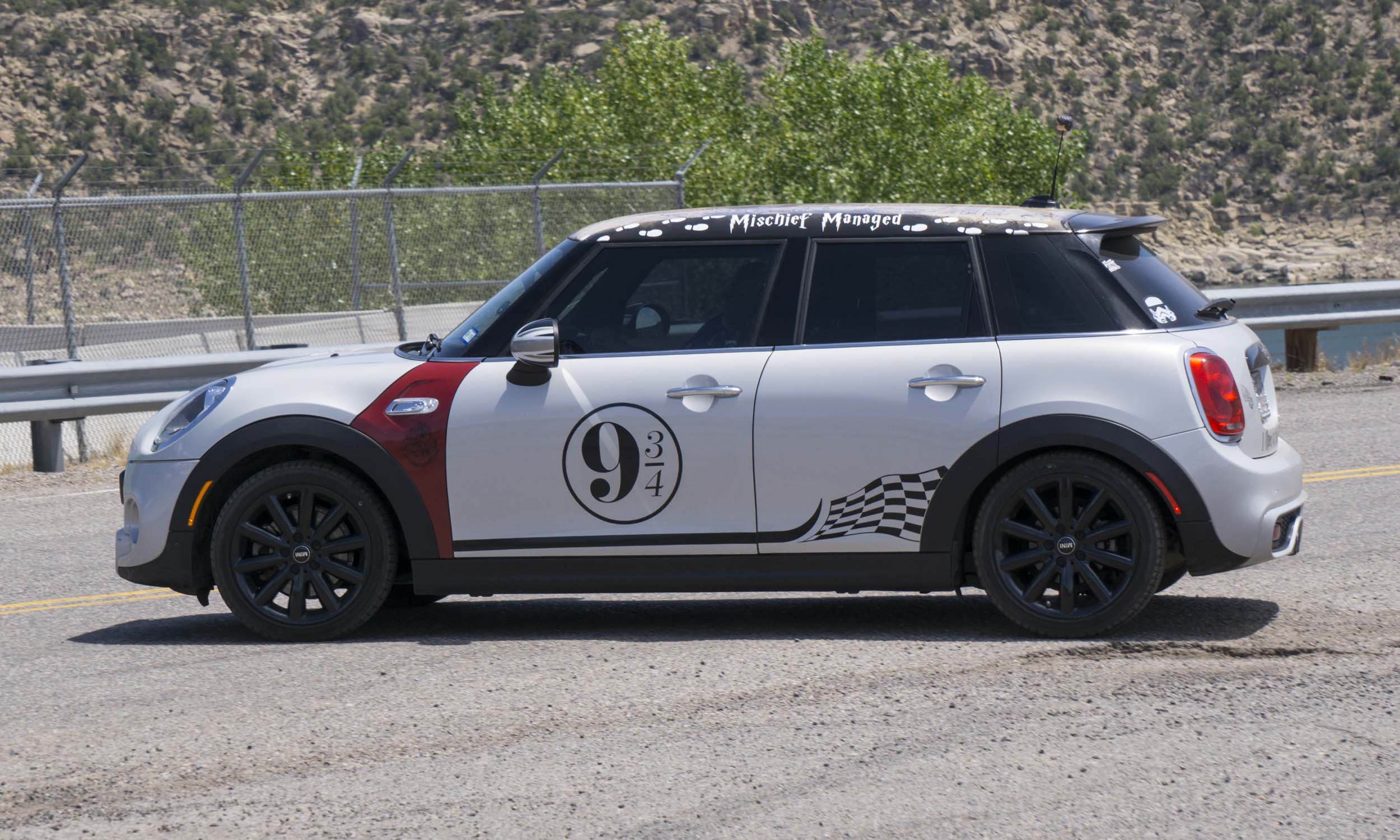 Harry Potter MINI
There was nice detail on this particular MINI – the Marauder’s Map is on the roof, the checked flag on the side looks like a broom, while the tailgate says “I open at the close”. We’re not sure how the storm trooper sticker fits in though. 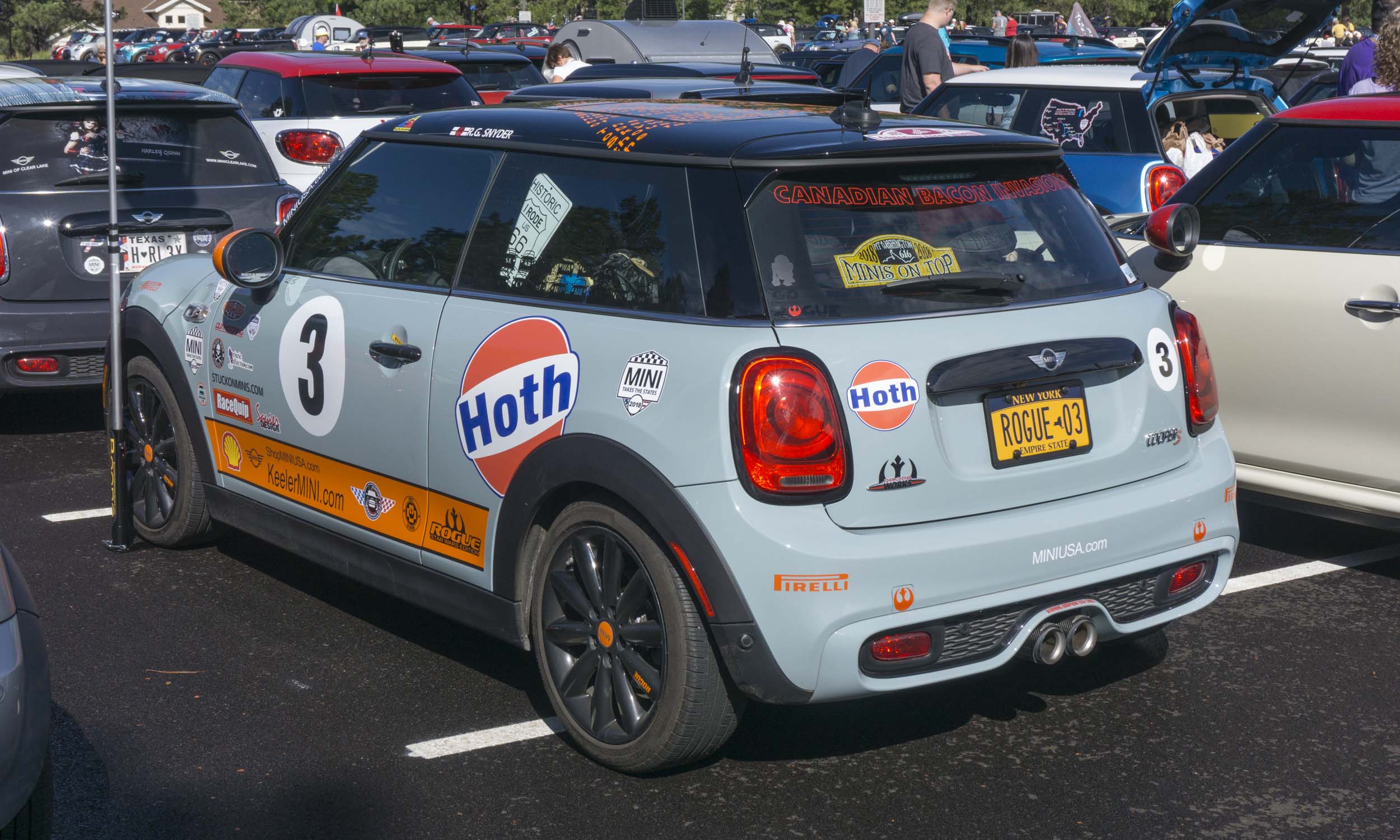 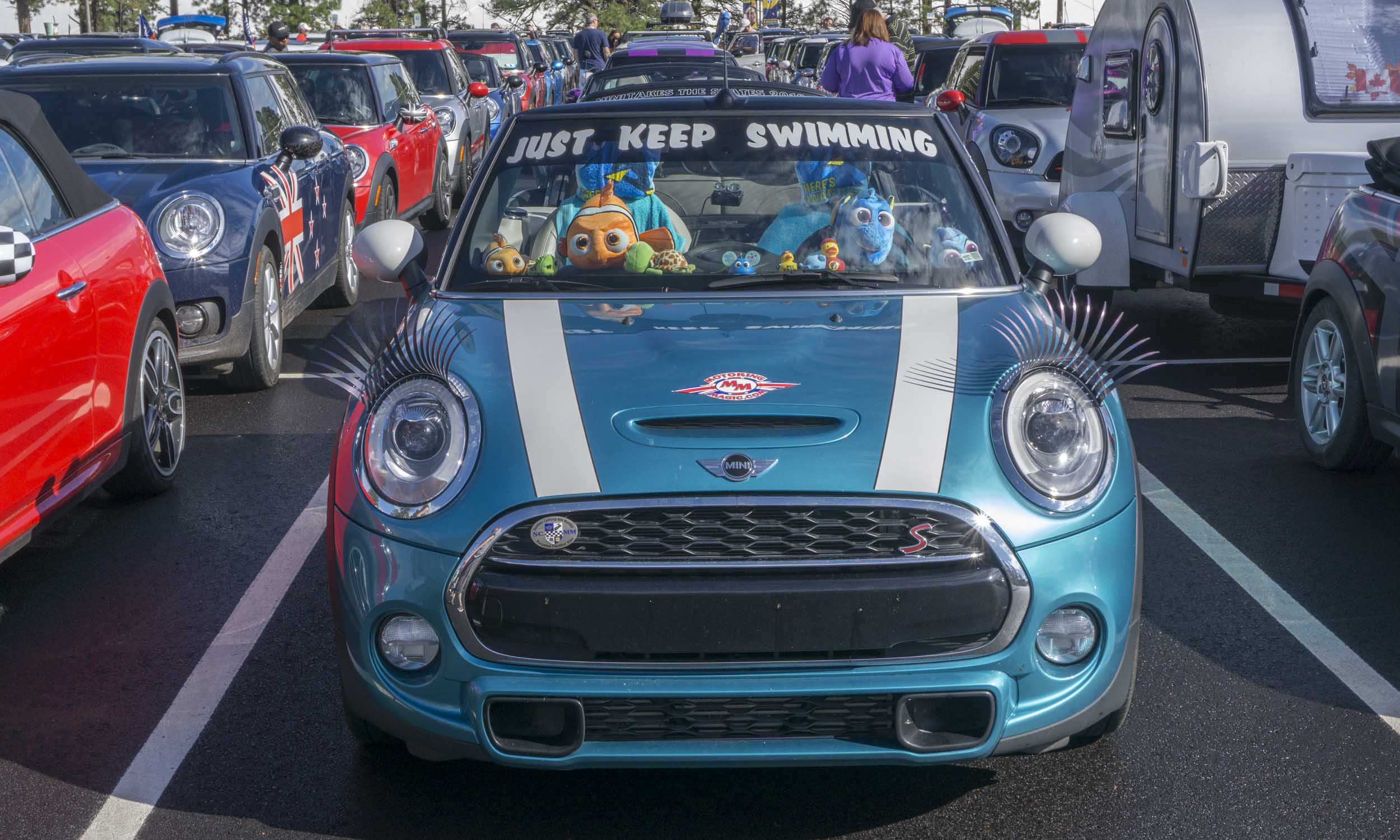 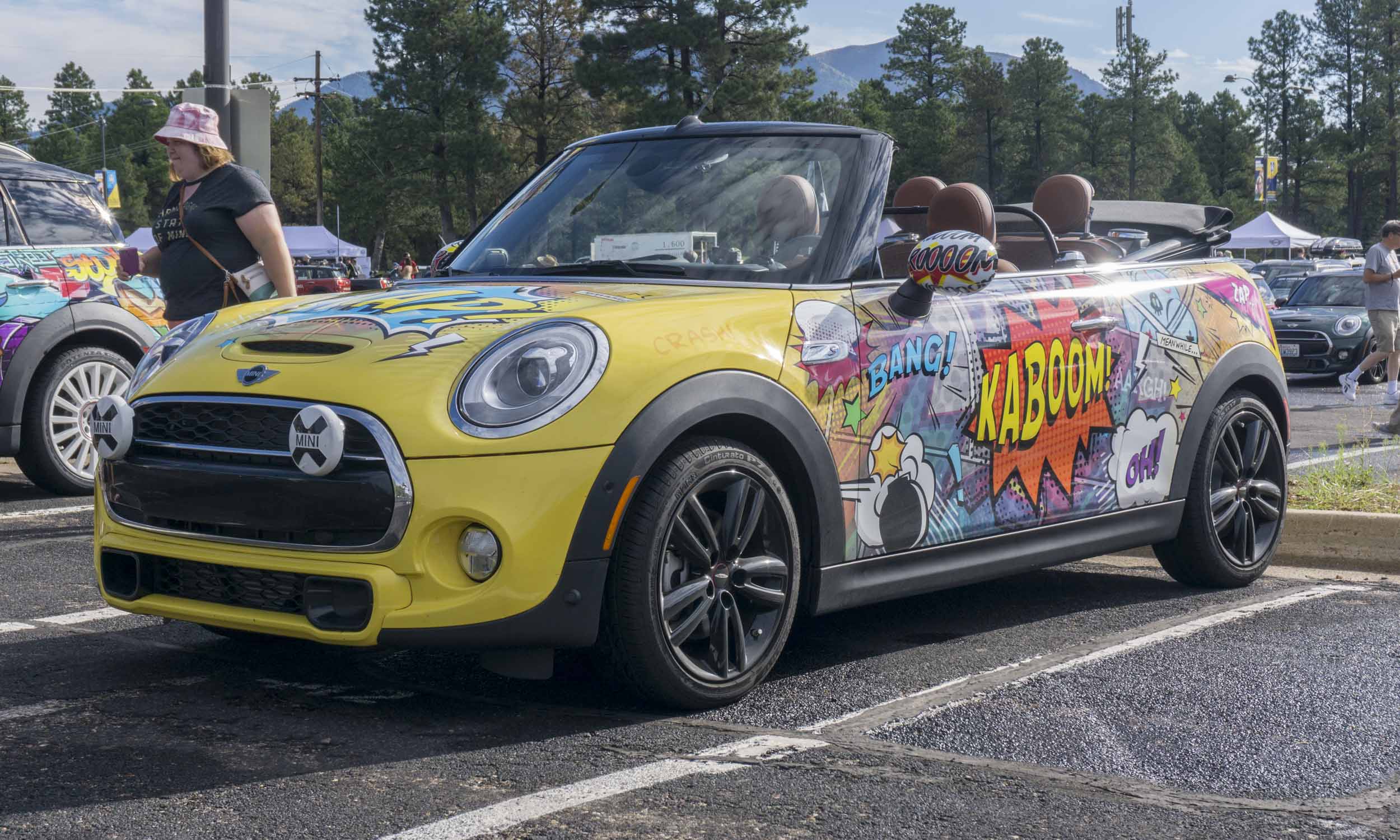 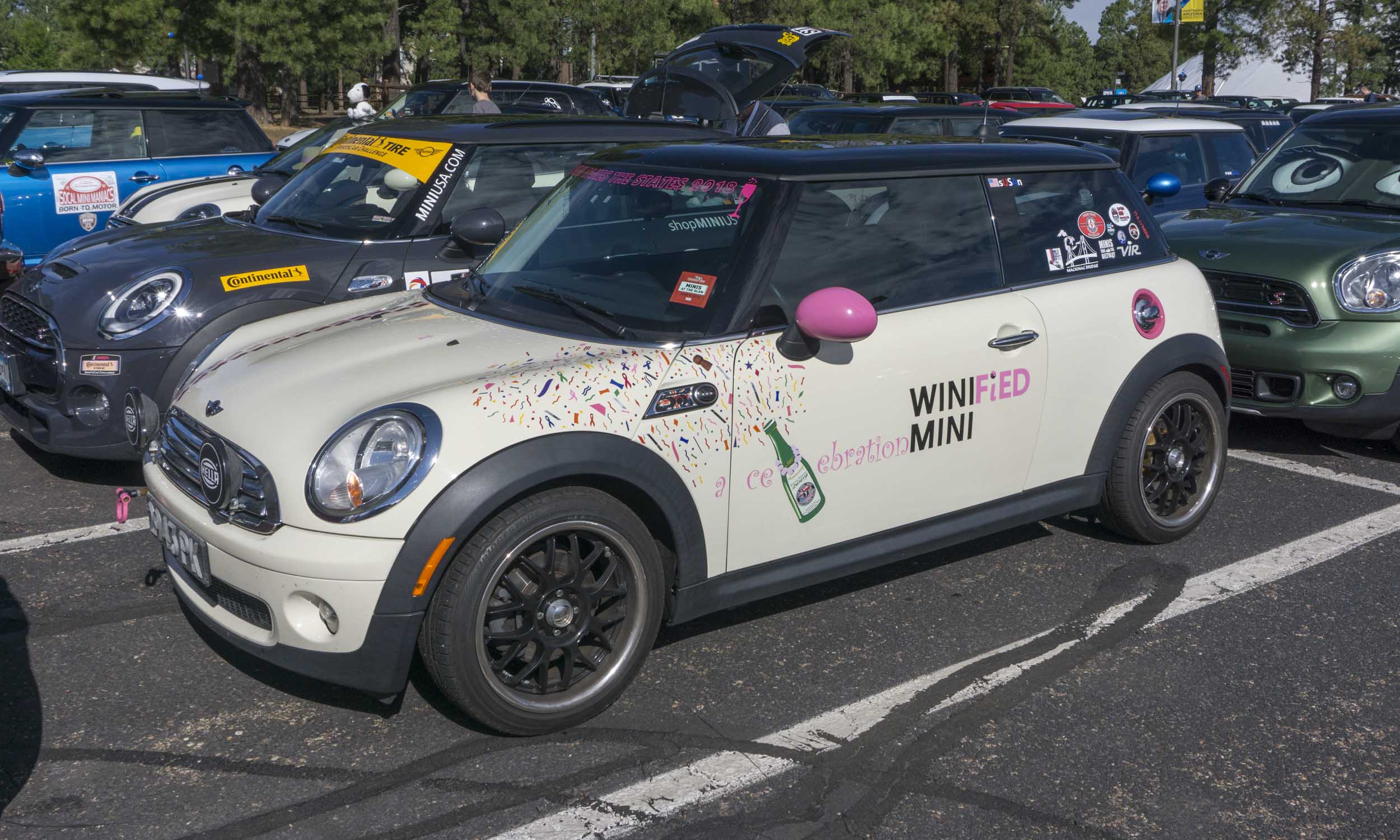 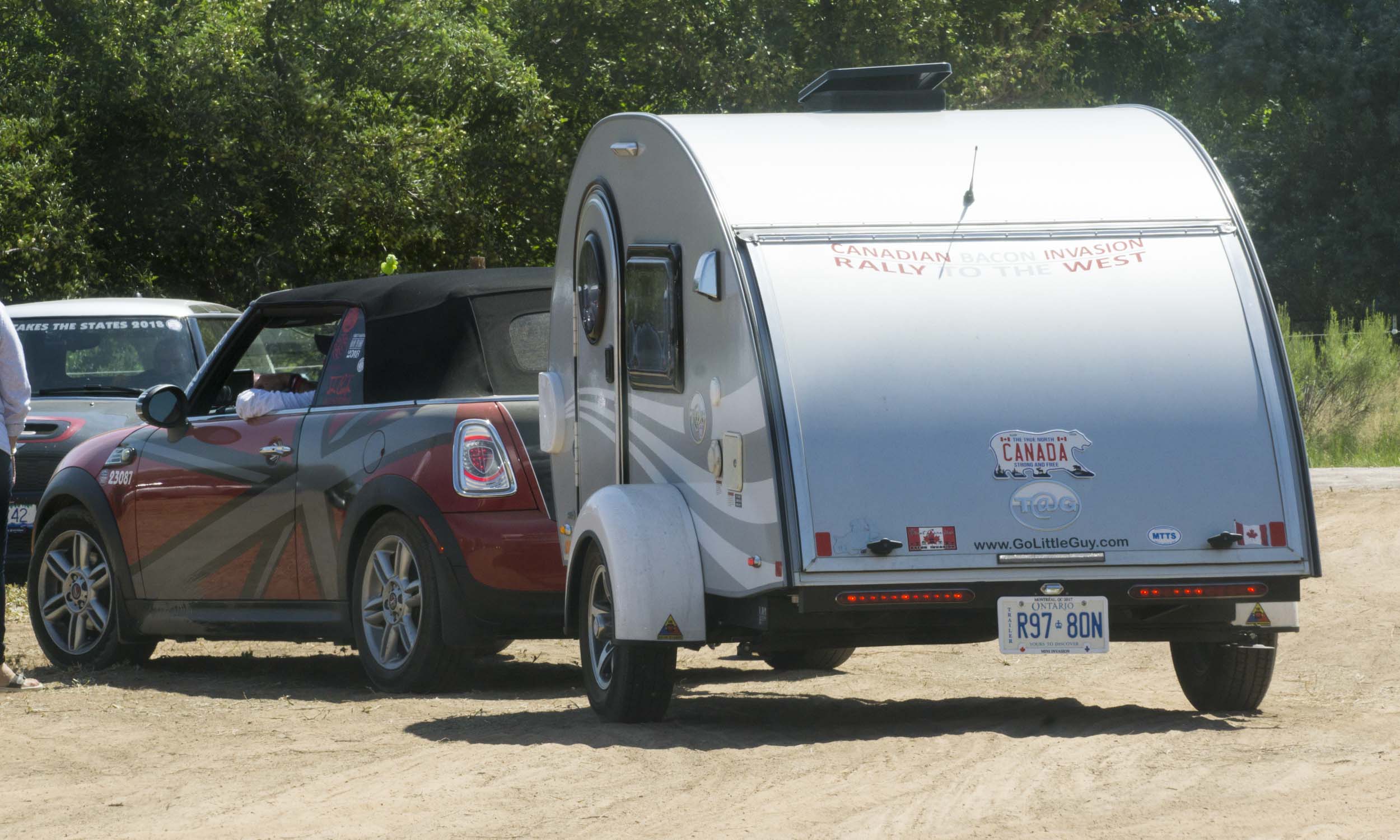 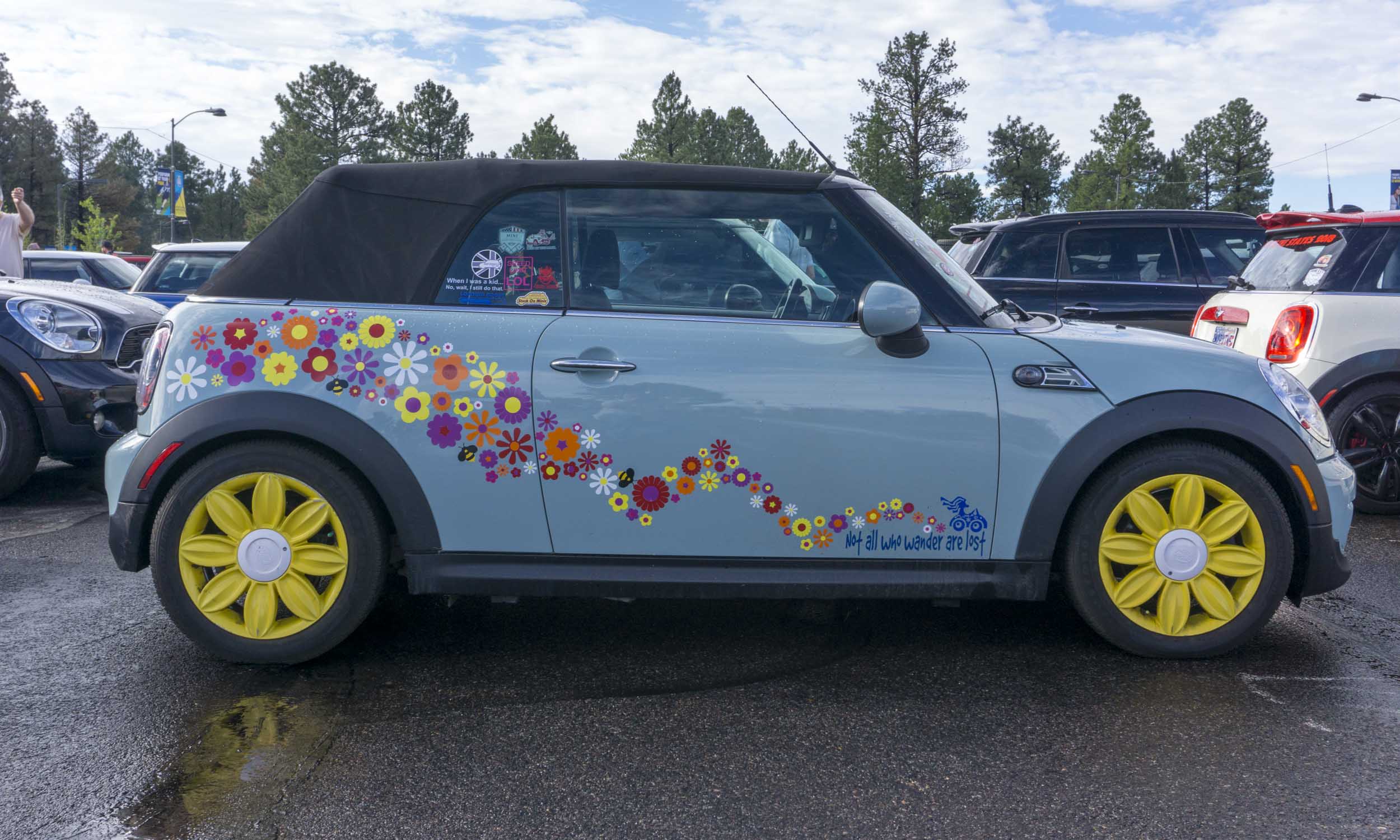 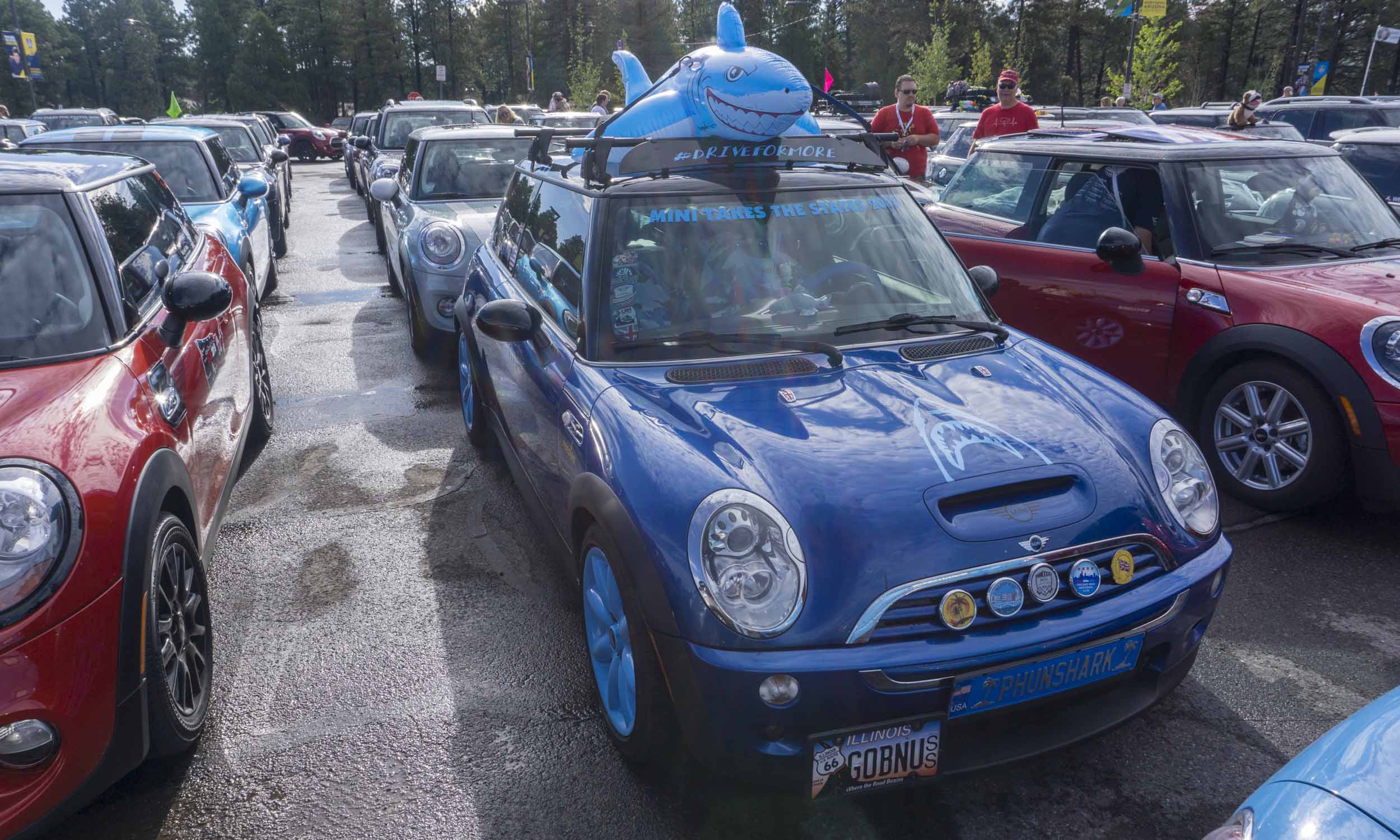 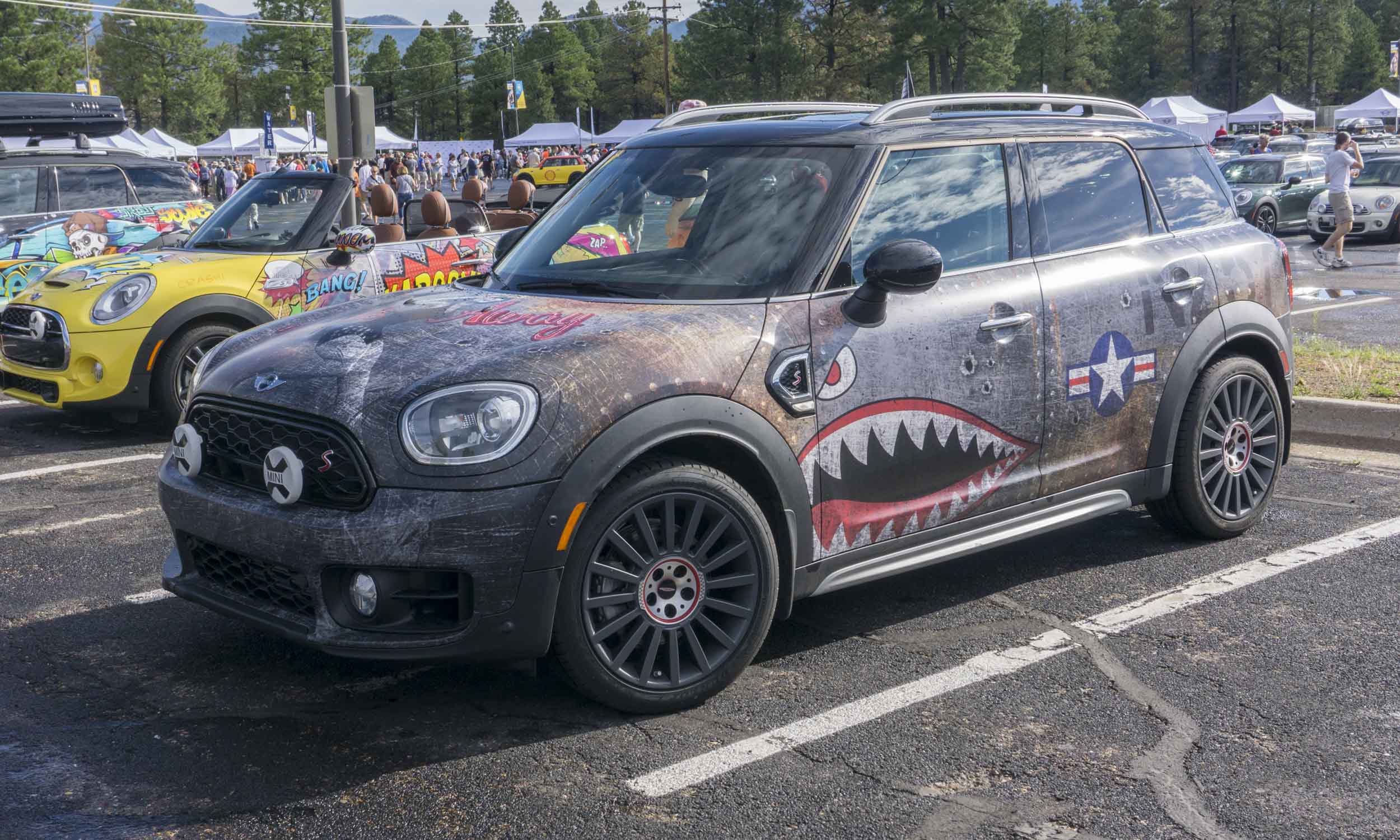 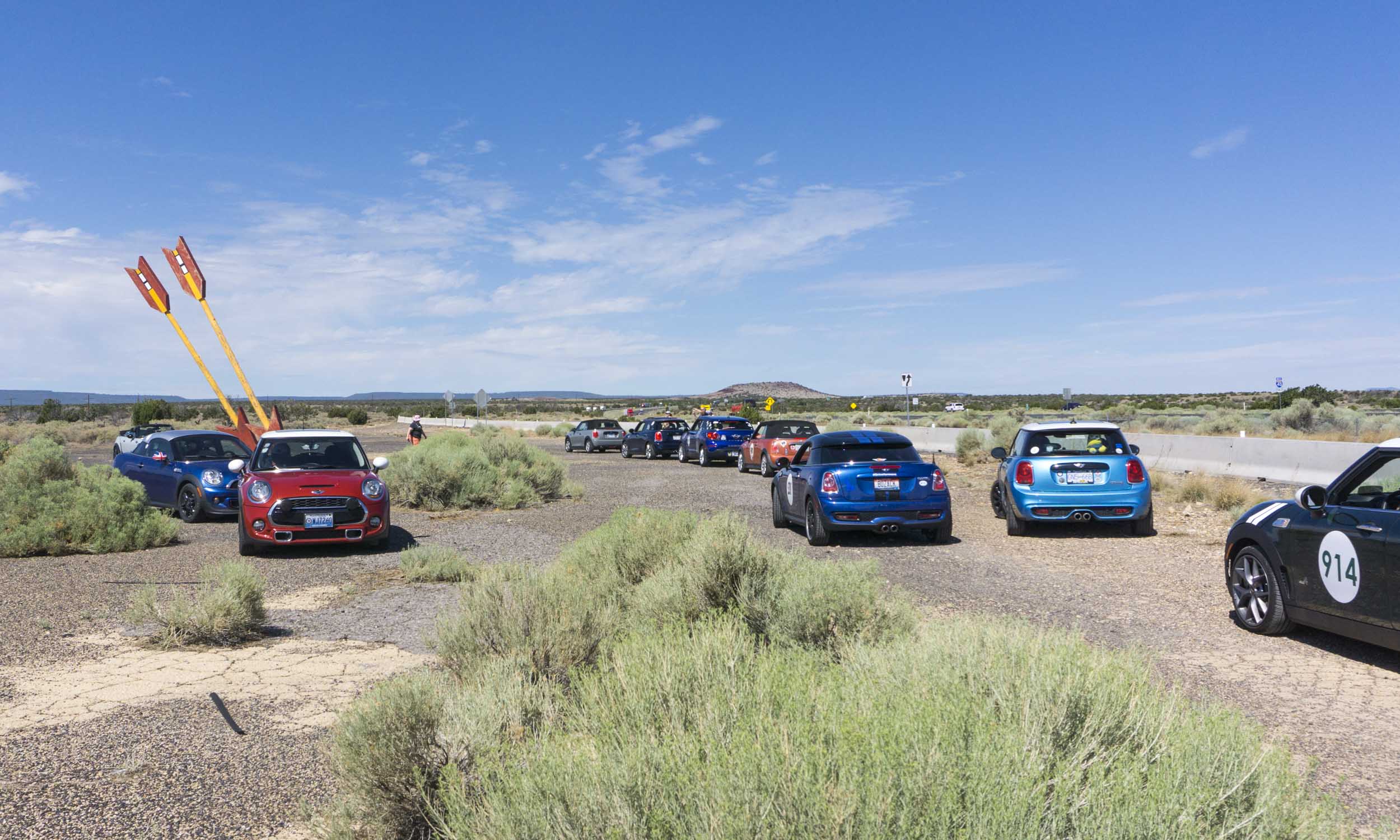 MINIs MINIs Everywhere
When several hundred MINIs all head in the same direction, the little cars tend to dominate — or rather punctuate — the landscape along the MTTS route. It seemed like every roadside attraction was inundated with MINIs, like this abandoned Twin Arrows Trading Post outside of Flagstaff, AZ. 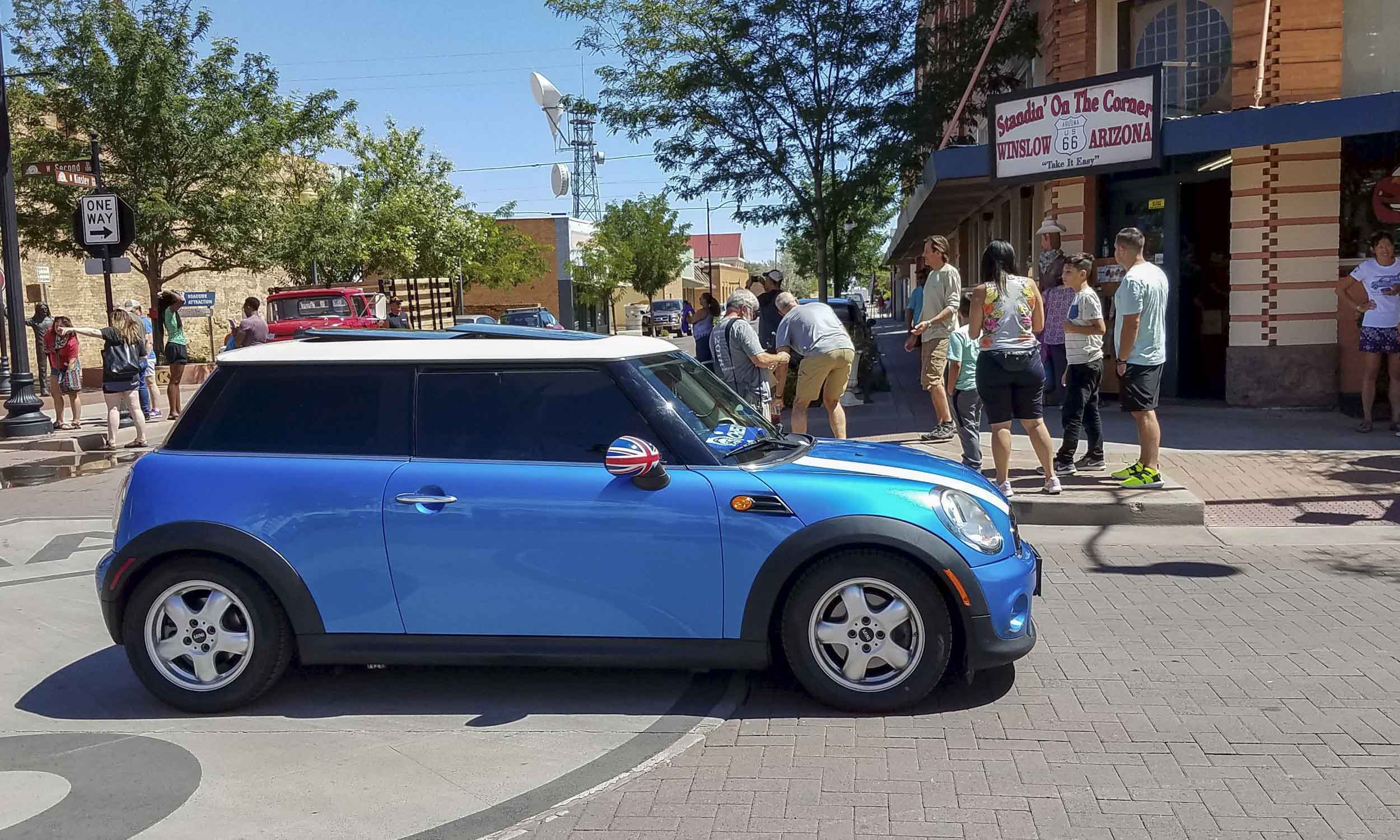 Standing on a Corner
This was especially true when we drove through Winslow, Arizona — the city made famous by the Eagles song “Take it Easy.” Standing on a corner in Winslow, Arizona, there was such a fine sight to see — instead of a girl in a flatbed Ford, it was a parade of MINI devotees. 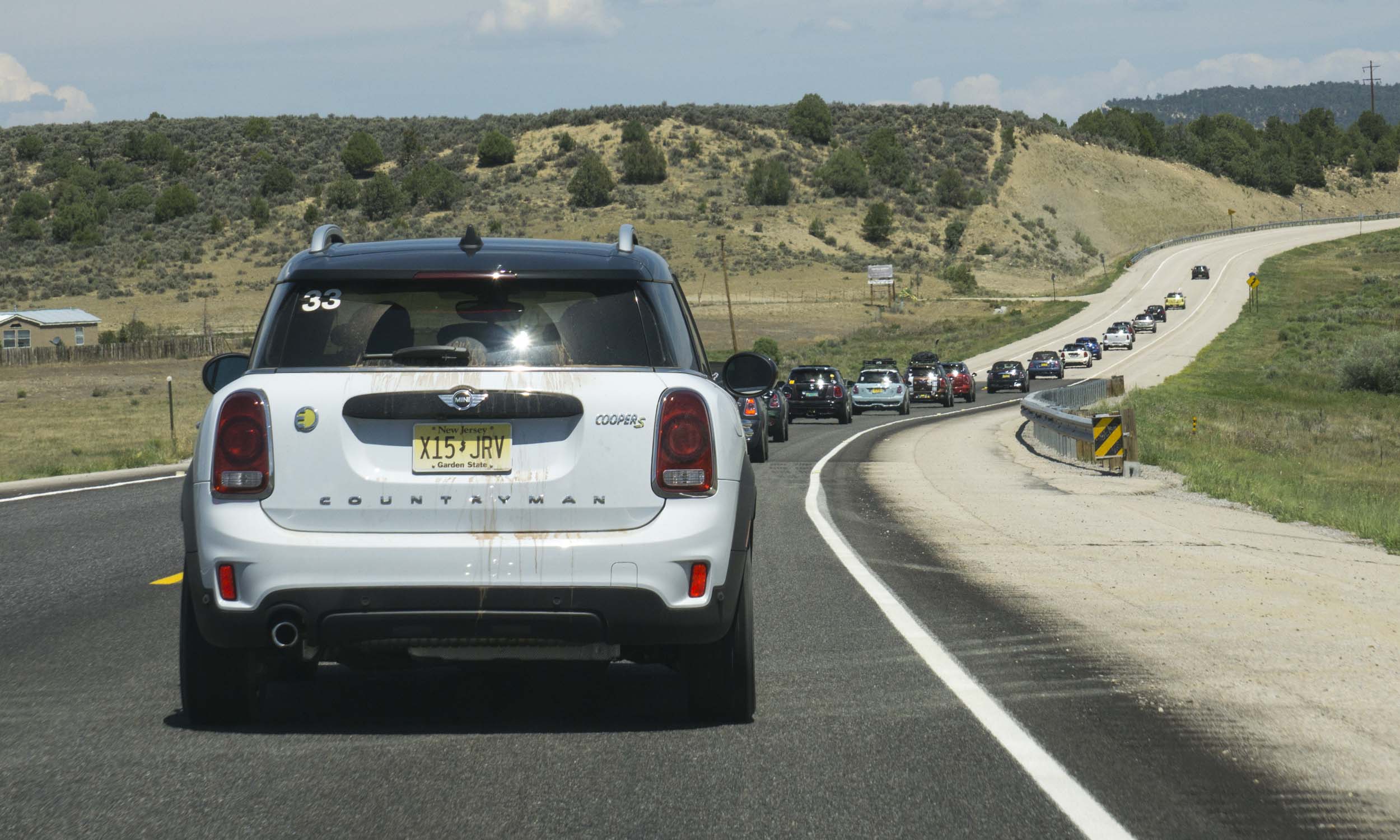 MINI Lineup
Although all MINIs share a signature look, there are several models to choose from and all were represented at MINI Takes the States. There were 2-door and 4-door Cooper Hardtops, the larger Clubman, the SUV-like Countryman and the MINI Convertible. A variety of trim levels are available, as well as performance variants that range from plug-in hybrids to the high-performance John Cooper Works editions. 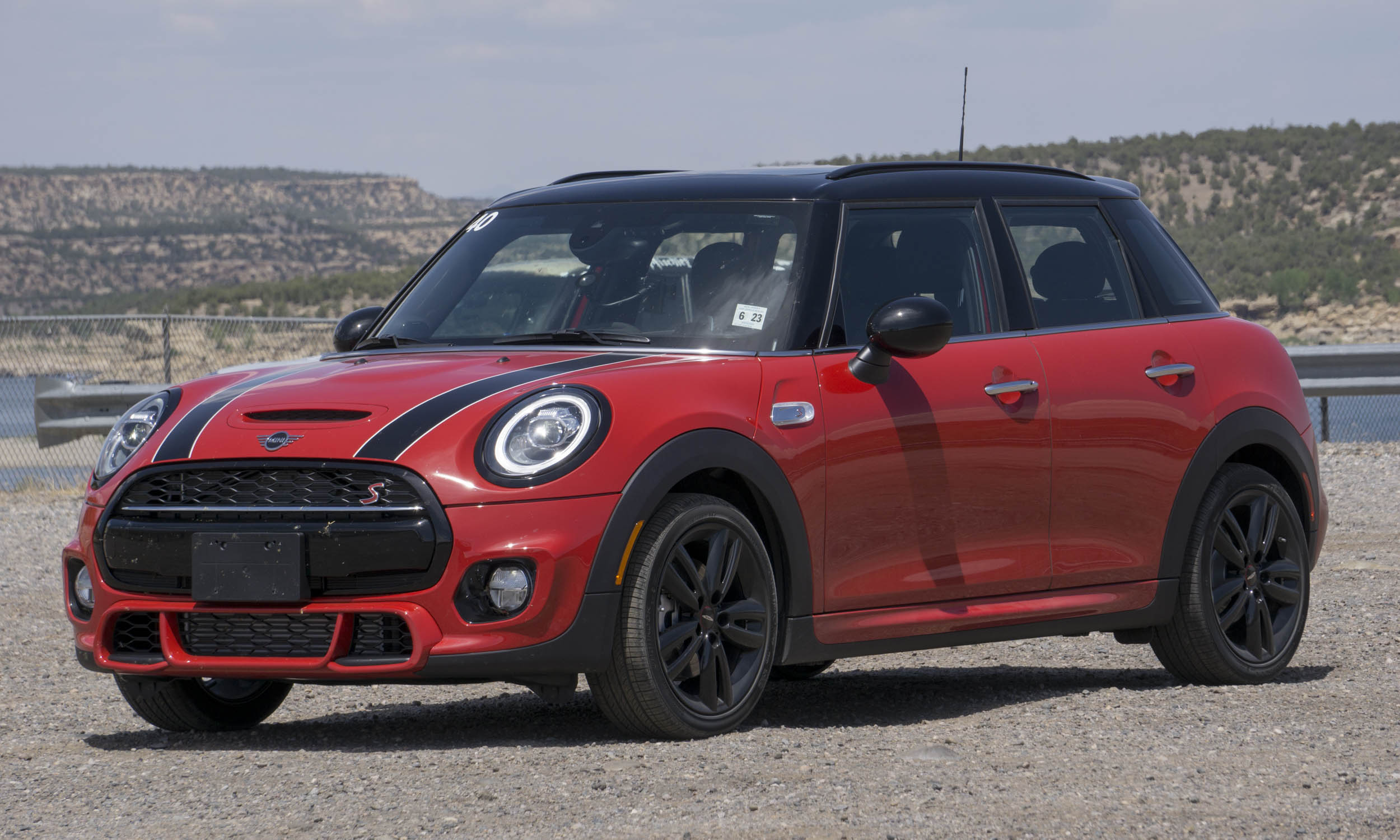 Our MTTS MINI
MINI USA provided us with an appropriate car to join the MINI Takes the States rally — a 2019 Chili Red Cooper S 4-Door Hardtop. The Cooper S has a turbocharged 2.0-liter engine producing 189 horsepower, and our vehicle was properly equipped with a 6-speed manual gearbox. While the EPA rating for the Cooper S manual is 32 mpg on the highway, over the 1,000 miles or so that we drove we averaged 33.7 mpg — impressive even for this small car. 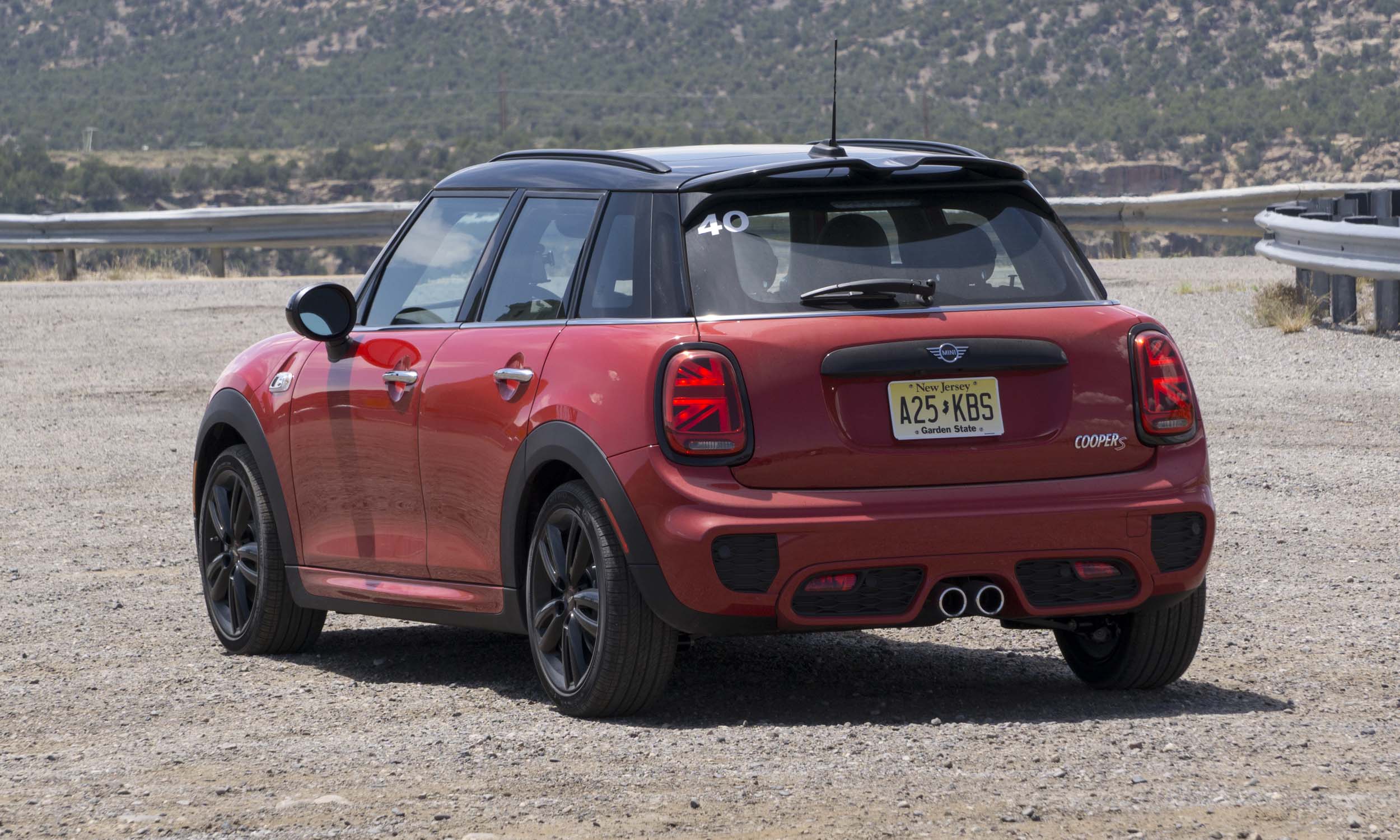 Fun Driver
The Cooper S is a blast to drive – the quick, agile handling always puts a smile on the face when the road gets curvy. The additional rear doors make the car quite versatile, and the cargo area had enough space for our two suitcases and a backpack. For a long road trip such as this rally, the seats are impressively comfortable. We spent about 12 hours behind the wheel over two days and never got stiff or fatigued — the MINI is an excellent road-trip car. 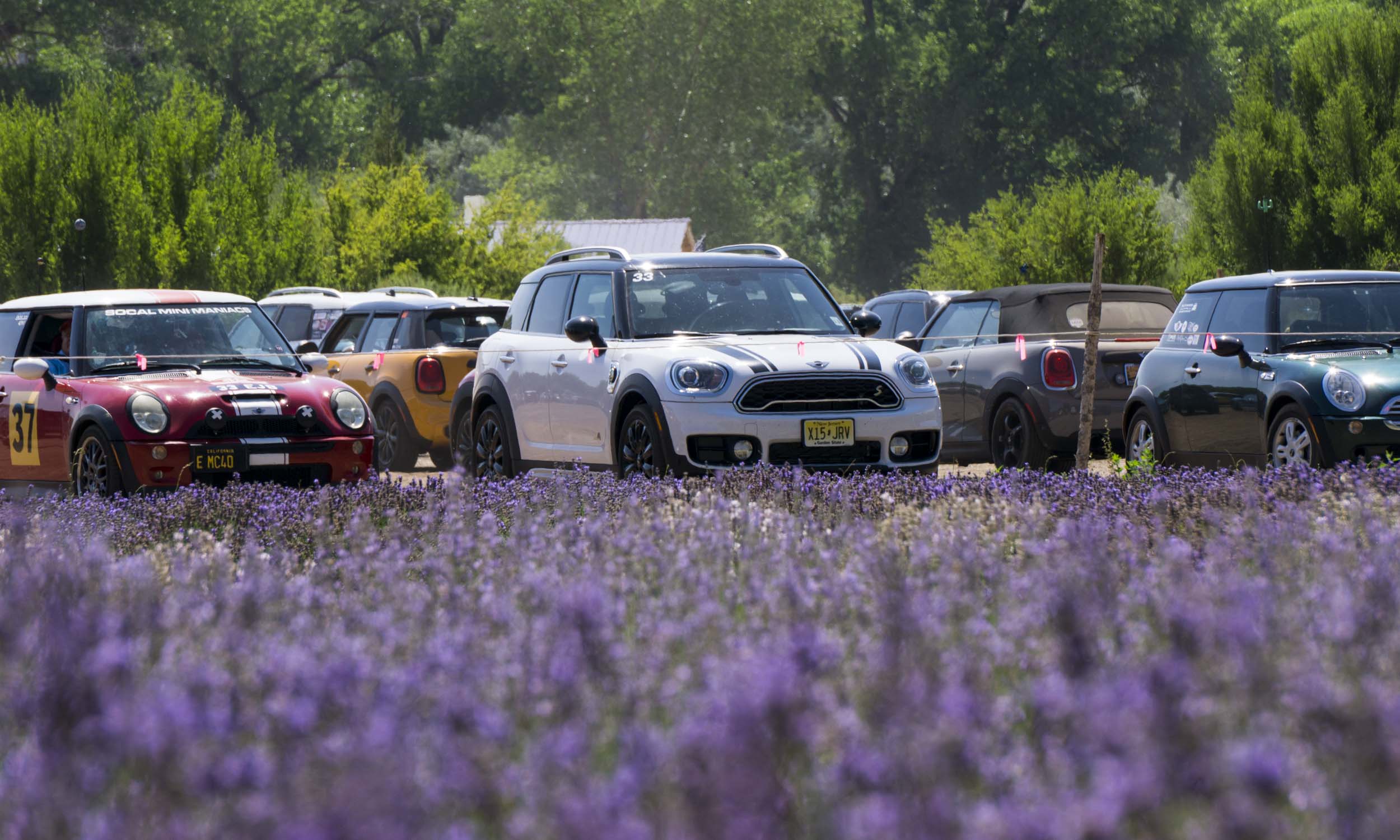 MINI Stories
A highlight of joining this group of MINI enthusiasts was hearing personal stories about how owners’ lives are integrated with their cars. We spoke with a woman who told us that she met her husband on this event a few years ago. At the time she was driving a yellow MINI, he was driving a blue one. Now that they’re married, they drive a green MINI. Another rally attendee was getting his brand-new MINI Countryman ready to travel for the day. He explained that his first date with his wife did not go well, but when he walked her to her car, he saw she drove a MINI. They started talking about cars, ended up on another date, and now they bought the larger Countryman together because they have a baby on the way. 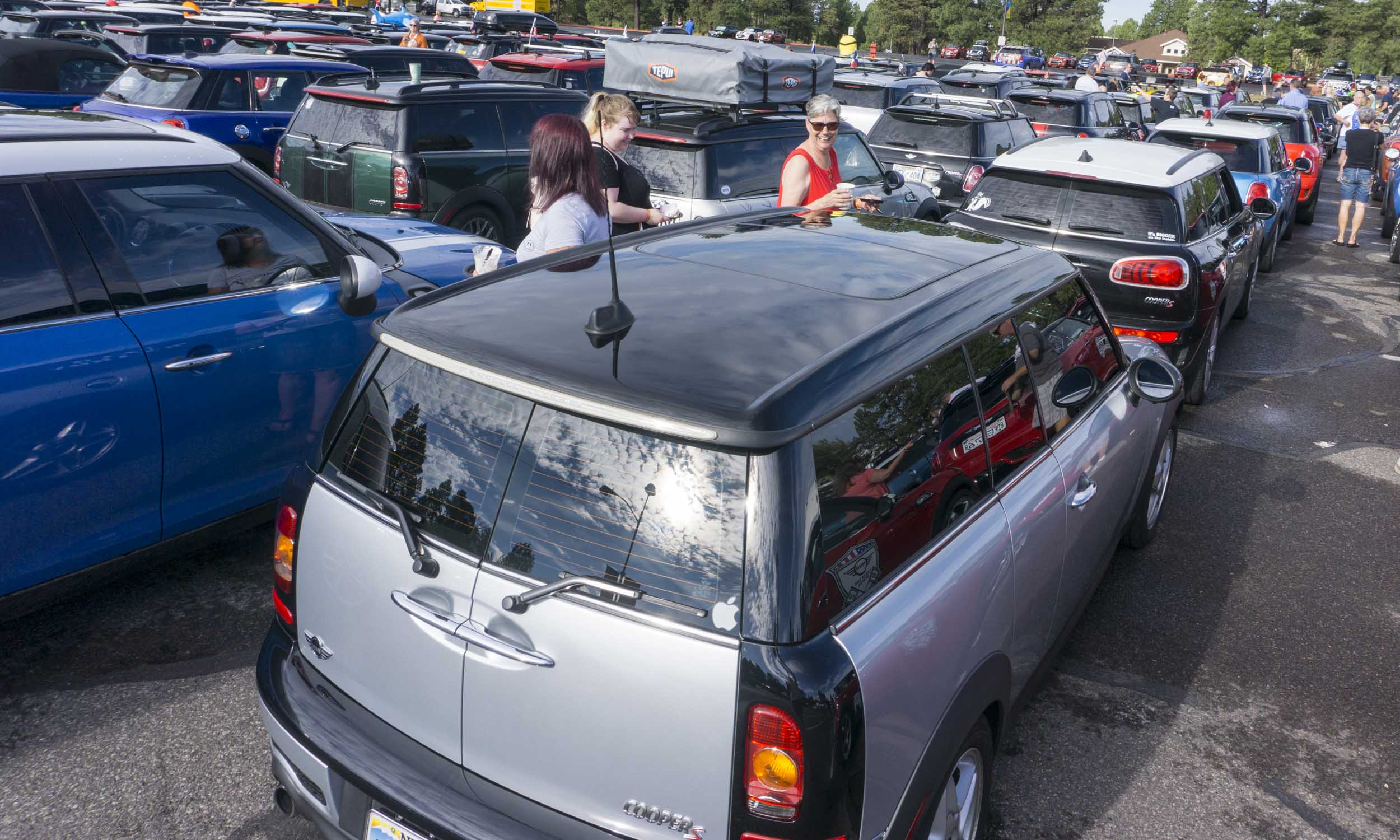 Do It Again
MINI Takes the States is a wonderful social affair that not only brings enthusiastic MINI owners together for the ultimate road trip, it raises money and awareness for charities such as Feeding America. We feel fortunate we were able to join this unique event, and there are several thousand MINI owners already looking forward to the next one.