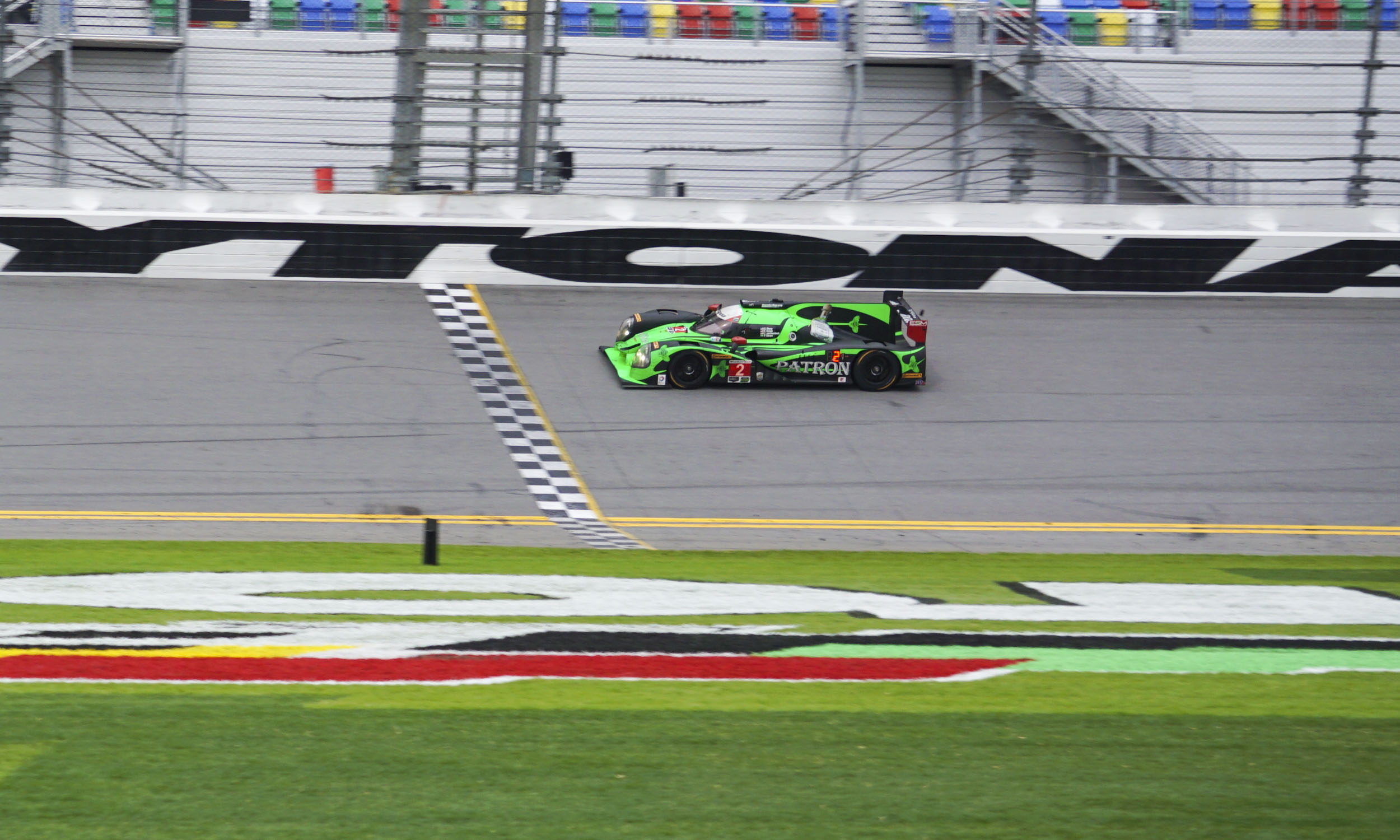 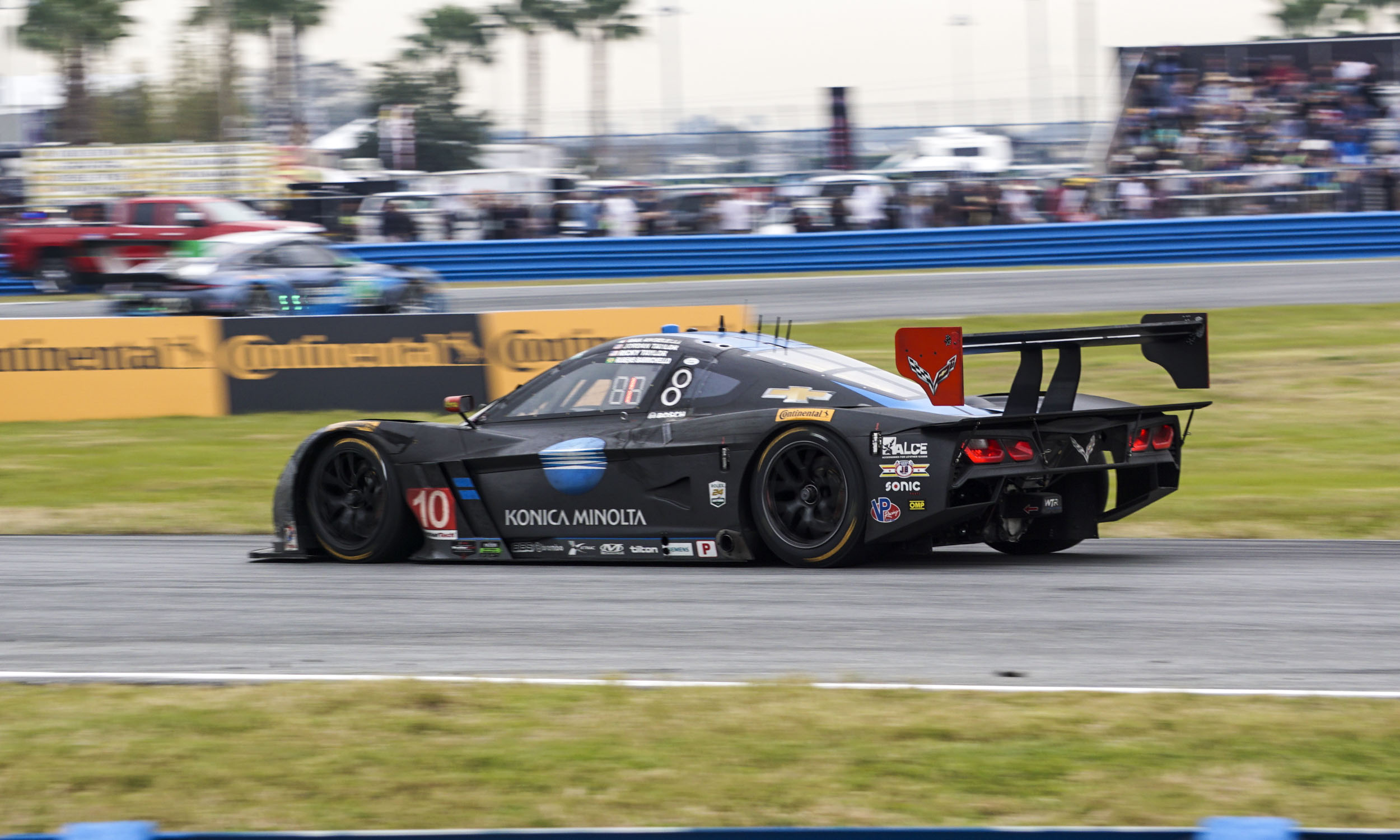 © Mike Meredith Automotive Content Experience
Racing Tough at the Front
While the final margin of victory was a little more than 26 seconds, the No. 2 Ligier JS P2 Honda HPD battled through the closing four hours with the No. 10 Konica Minolta Corvette DP for Wayne Taylor Racing and the No. 90 Visit Florida Racing Corvette DP. The No. 10 finished second — piloted by Ricky Taylor, Jordan Taylor, Max Angelelli and former Ferrari Formula 1 driver Rubens Barrichello — although it was in the top five on the leader board all day and in first place at the top of the hour numerous times. Third across the finish line in the Prototype class was the No. 90 driven by Ryan Daiziel, Ryan Hunter-Reay and Marc Goosens. The Prototype class consists of two different car types: Prototype 2 (the newest entry in the class) and the Daytona Prototypes, which are racing in their final season. 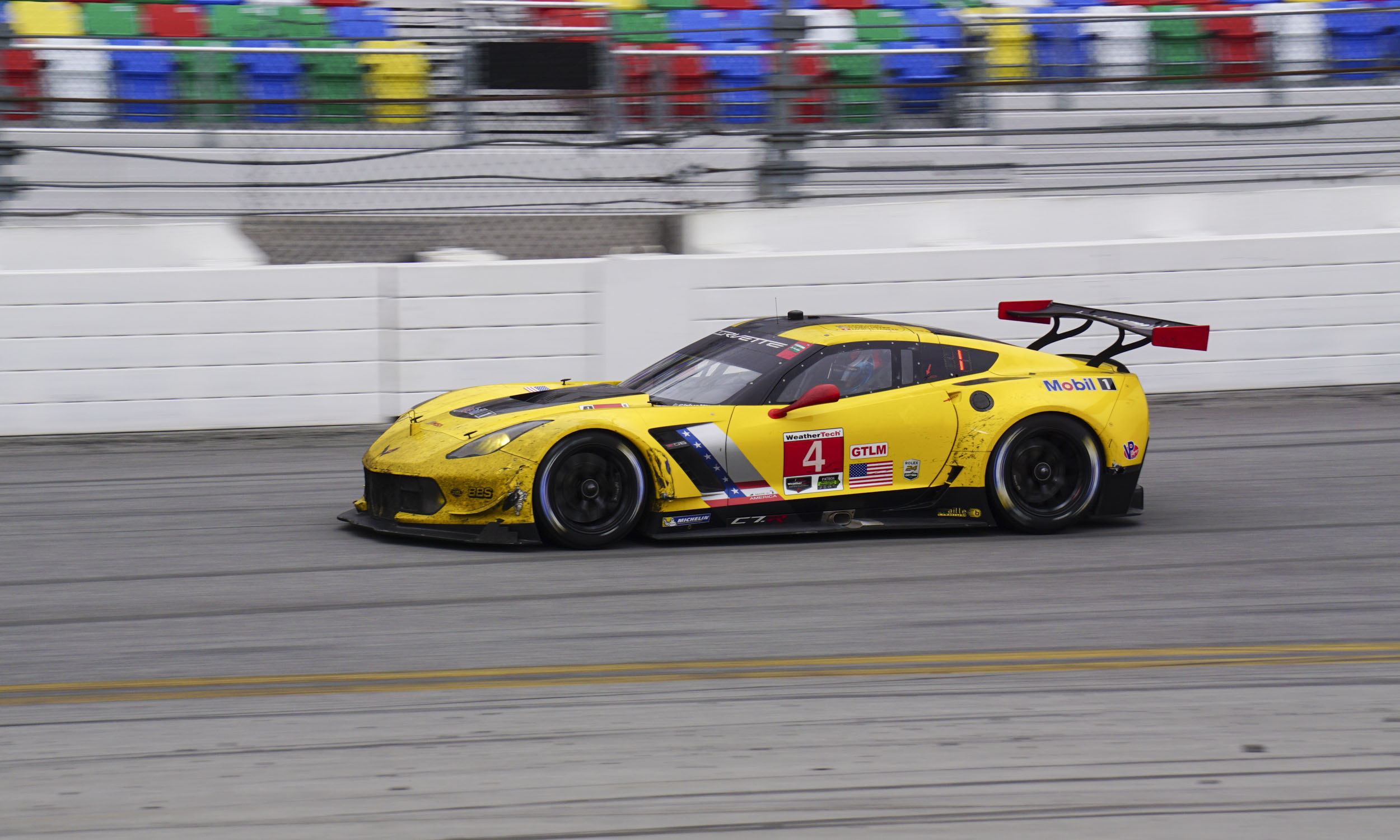 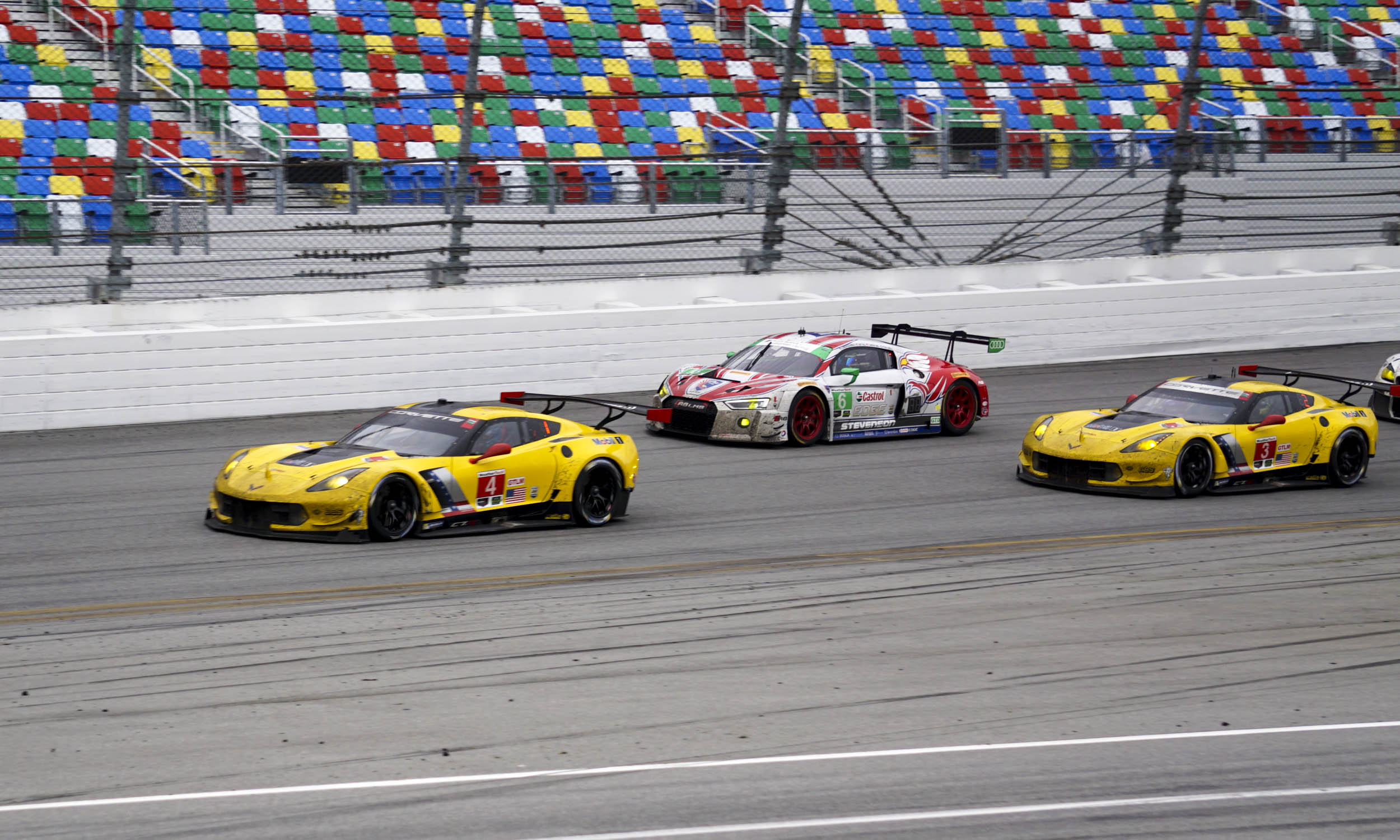 © Mike Meredith Automotive Content Experience
Race for the Win
With 15 minutes remaining in the 24-hour race, Gavin took the lead in GTLM class with his teammate Garcia right behind. As Garcia closed in and began pressing Gavin lap after lap, word came down that Doug Fehan, program manager of the Corvette Racing Program, had given his drivers the go-ahead to race for the win, which doesn’t always happen due to the risk of both cars crashing each other out and losing the race for the entire team. With just three minutes remaining, Garcia passed on the outside going through the tri-oval and entering turn 1, but Gavin retook the lead on the exit of the corner as Garcia pushed wide under braking. The pair remained in the same positions for the final two laps, with Garcia trying to pass at every opportunity, resulting in a photo finish. 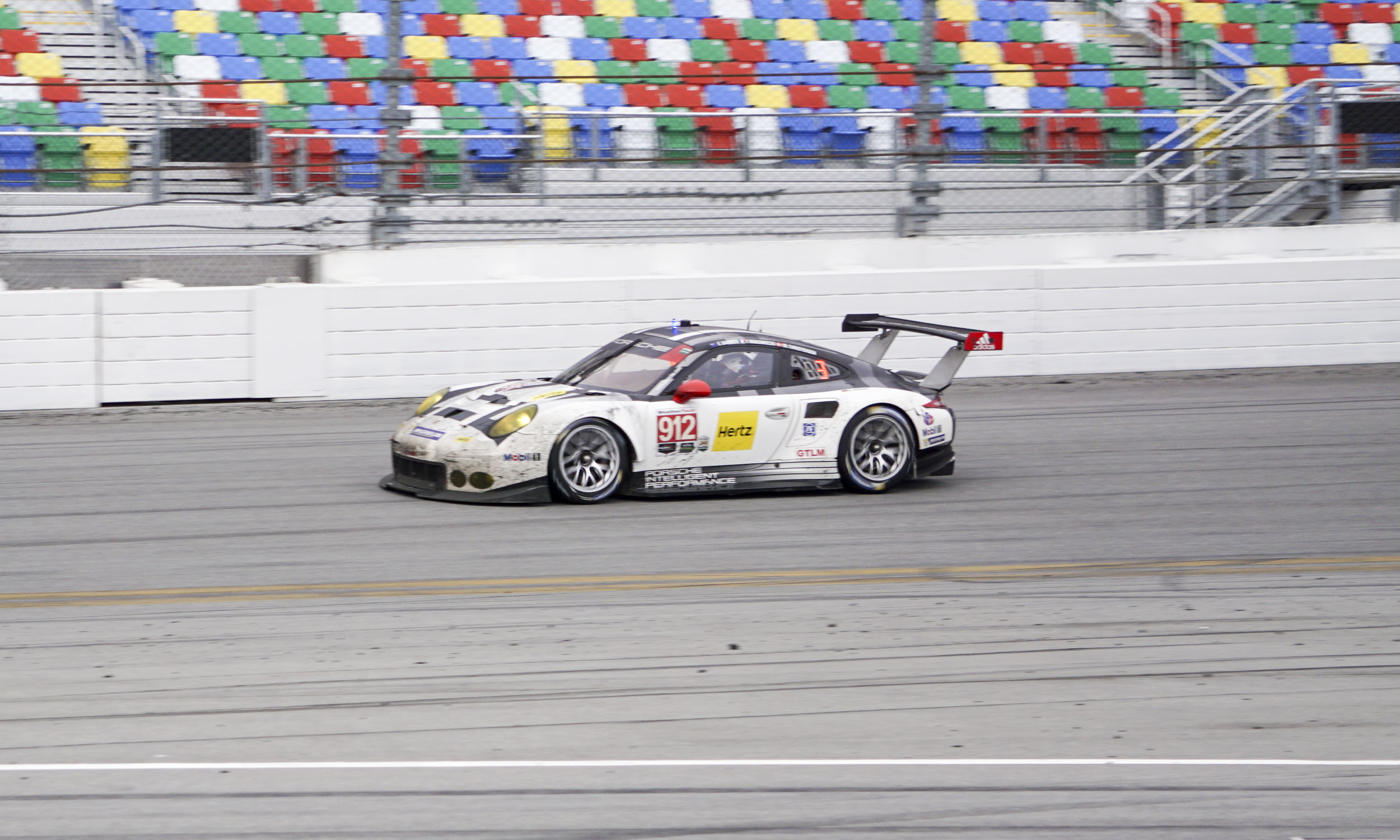 © Mike Meredith Automotive Content Experience
New Entries in GTLM
Although the GTLM finale was all Corvette, the competition in the GTLM class was tough with multiple lead changes throughout the race, and three cars finishing on the lead lap with two more just a single lap down. In addition to the two Porsche North America 911 RSR entries that returned from last season, GTLM included new entries from BMW, Ferrari and Ford, making ALMS a truly international battle. The No. 912 Porsche North America Porsche 911 RSR — driven by Earl Bamber, Michael Christensen and Frederic Makowiecki — finished third in class, just under 13 seconds behind the No. 3 Corvette. 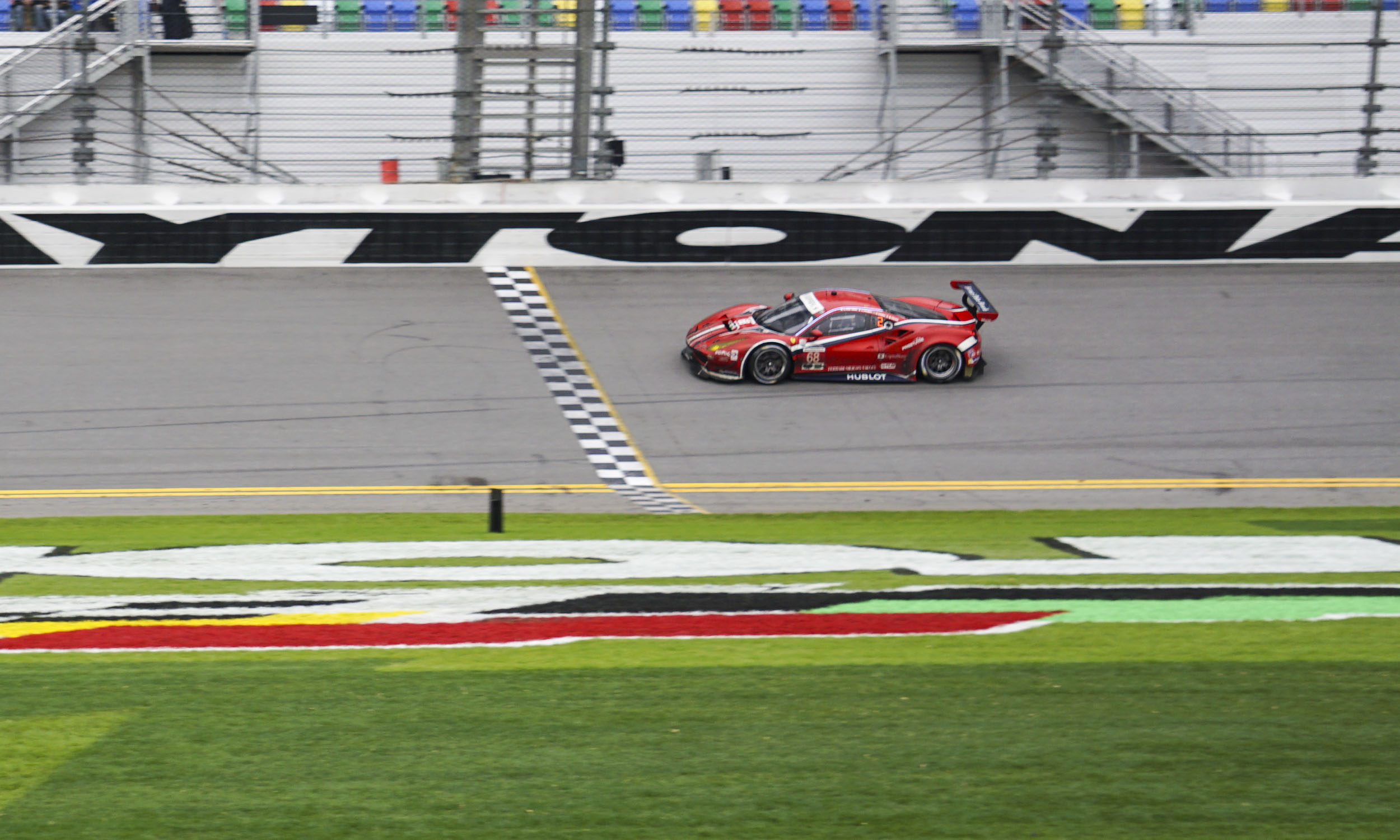 © Mike Meredith Automotive Content Experience
Ferrari 488 GTE
Three new Ferrari 488 GTEs rolled to the line in GTLM with the No. 68 Scuderia Corse entry finishing fourth in class, one lap down from the class-leading Corvette, and the No. 62 Risi Compeizione Ferrari 488 GTE finishing sixth in class. Alessandro Pier Guidi, Daniel Serra, Alexandre Premat and Memo Rojas drove the No. 68, while former Formula 1 driver Giancarlo Fisichella worked behind the wheel of the No. 62, along with Davide Rigon, Toni Vilander and Olivier Baretta. 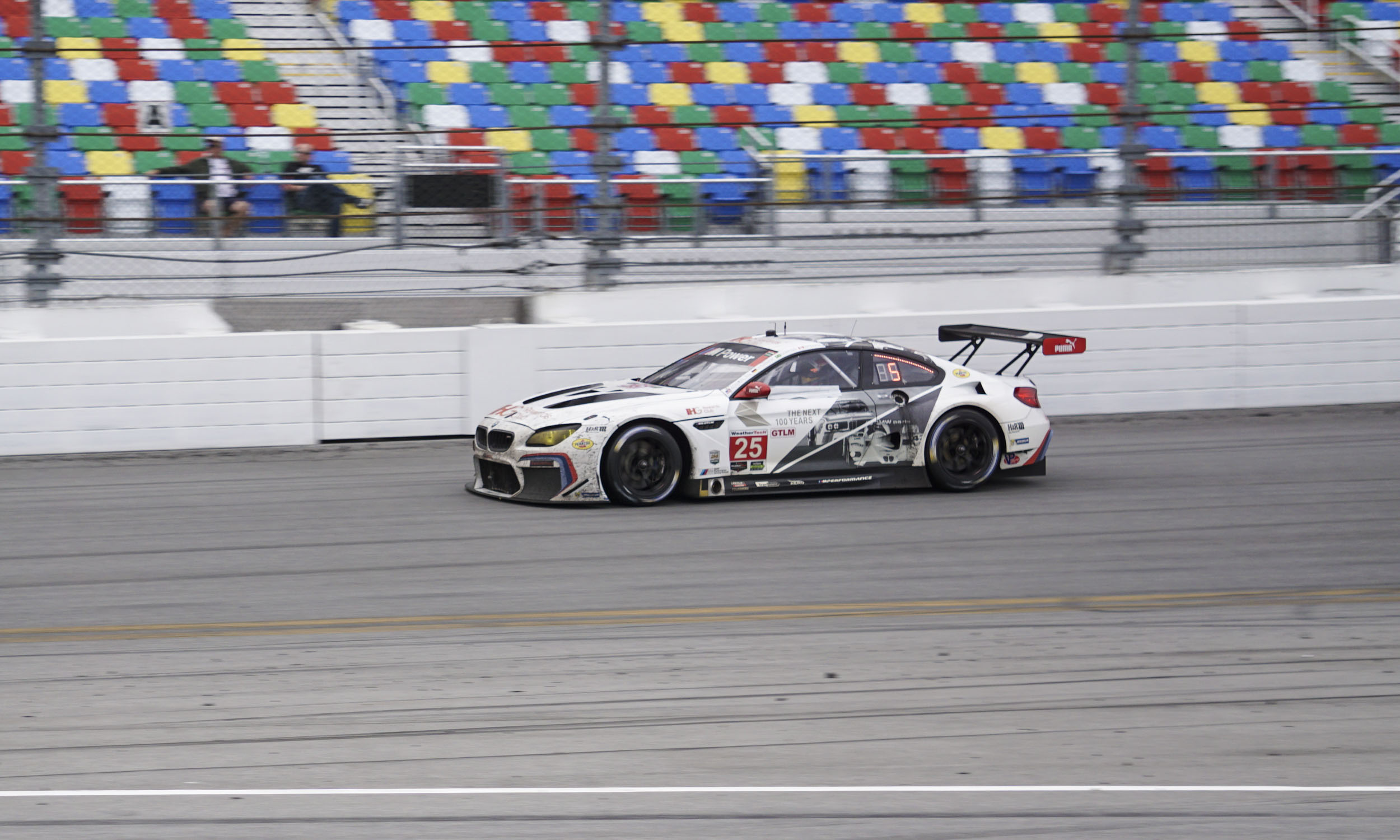 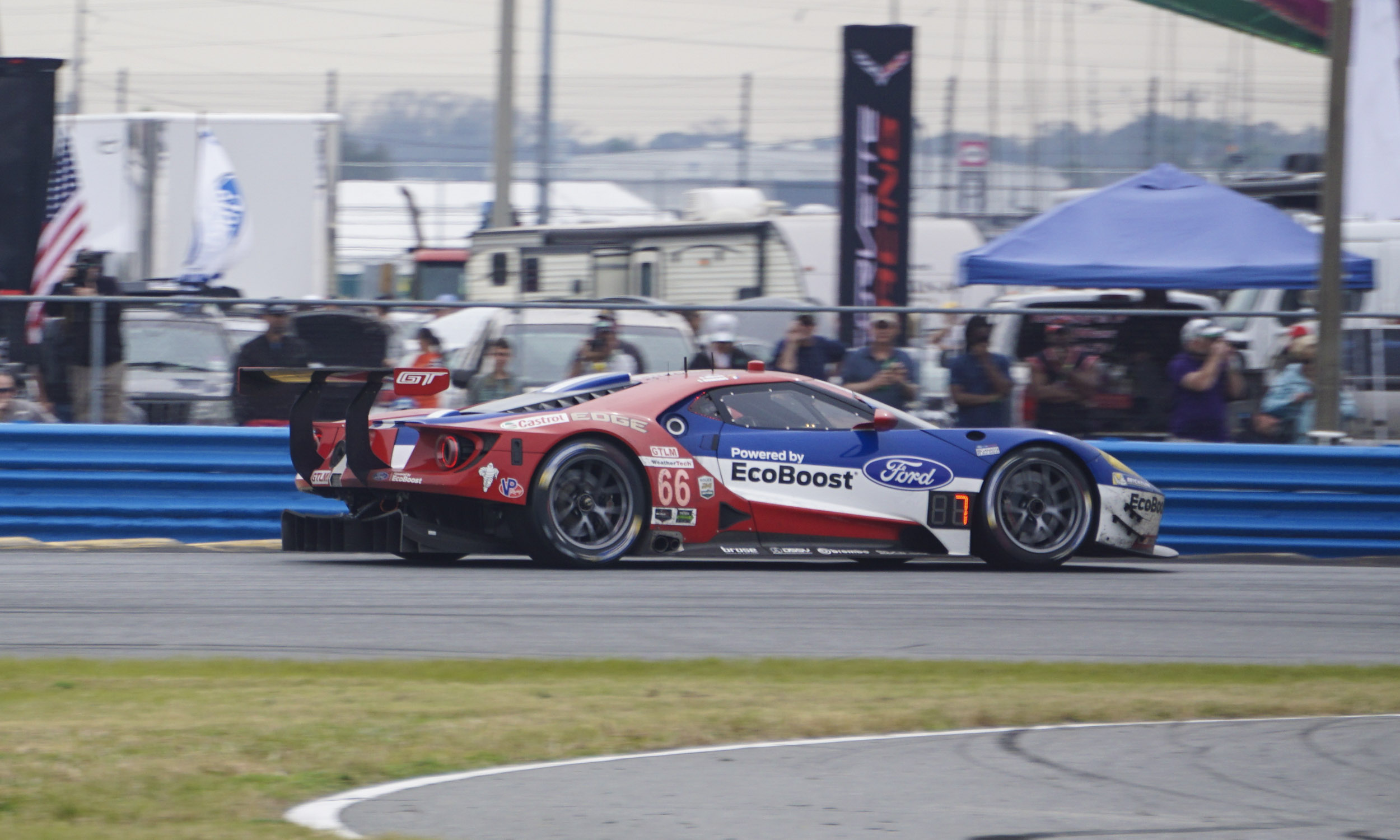 © Mike Meredith Automotive Content Experience
Ford Returns to Daytona
The debut of the Ford Chip Ganassi Racing Ford GT at the Rolex 24 garnered much interest and anticipation as the Ford GT returns to Daytona. Last year’s Rolex 24 overall winner in the Ford EcoBoost Riley DP, Ganassi Racing moved to the GTLM class with two new Ford GT entries. Both cars ran a strong pace with the front of the GTLM field, with Joey Hand taking the No. 66 Ford GT to third in class at the end of the first hour of racing. Unfortunately both cars encountered gearbox issues that dropped them too far behind to catch up to the front-runners. 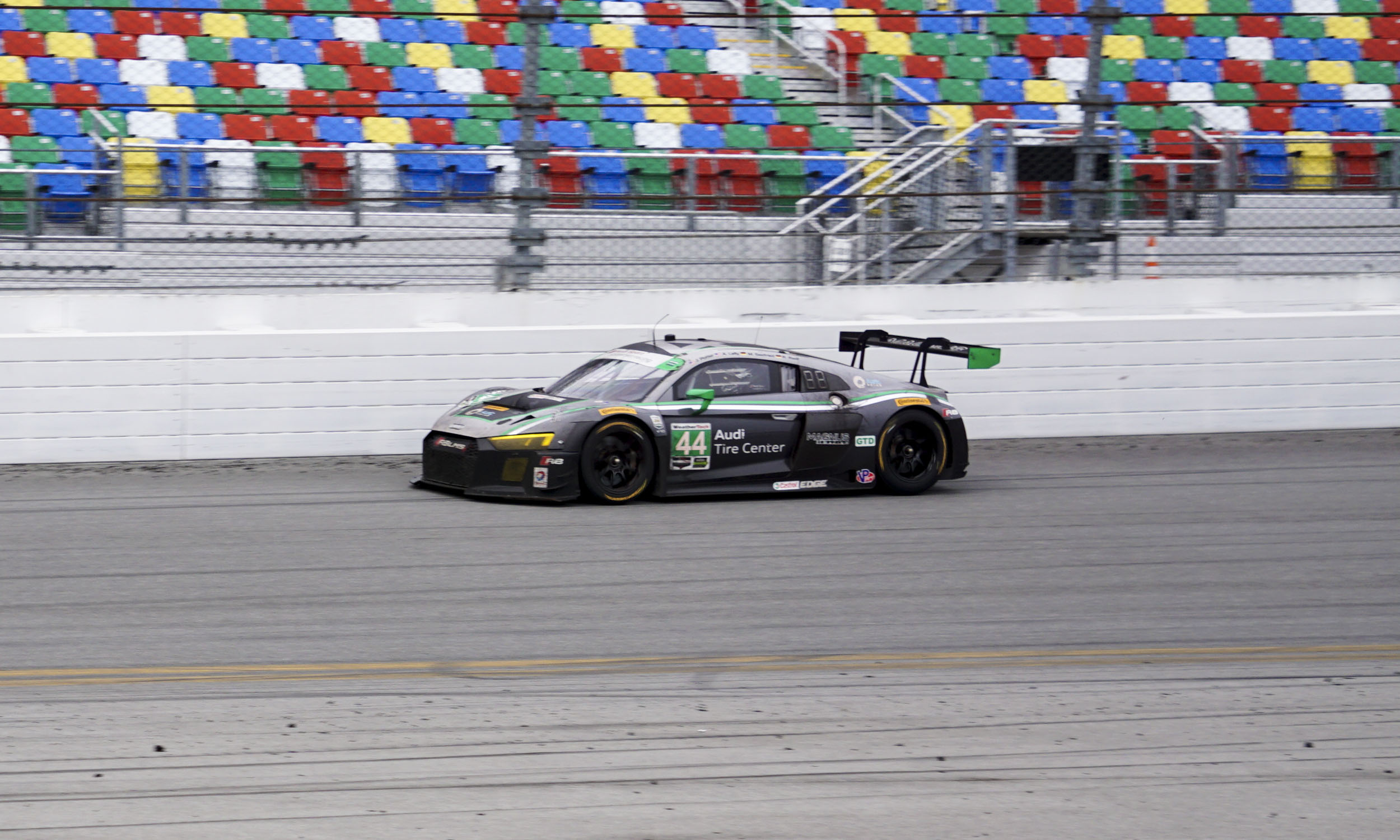 © Mike Meredith Automotive Content Experience
GT Daytona Class
Competition in the GT Daytona (GTD) class was fierce as the No. 44 Magnus Racing Audi Tire Center Audi R8 LMS GT3 held on to take the class victory after being passed by the No. 28 Konrad Motorsport Lamborghini Huracan GT3 with less than ten minutes remaining in the race. The No. 44 retook the lead minutes later when the No. 28 had to stop for a splash of fuel to make it to the end. Rene Rast brought the No. 44 home to victory, sharing the driving duties with John Potter, Marco Seefried and Andy Lally. 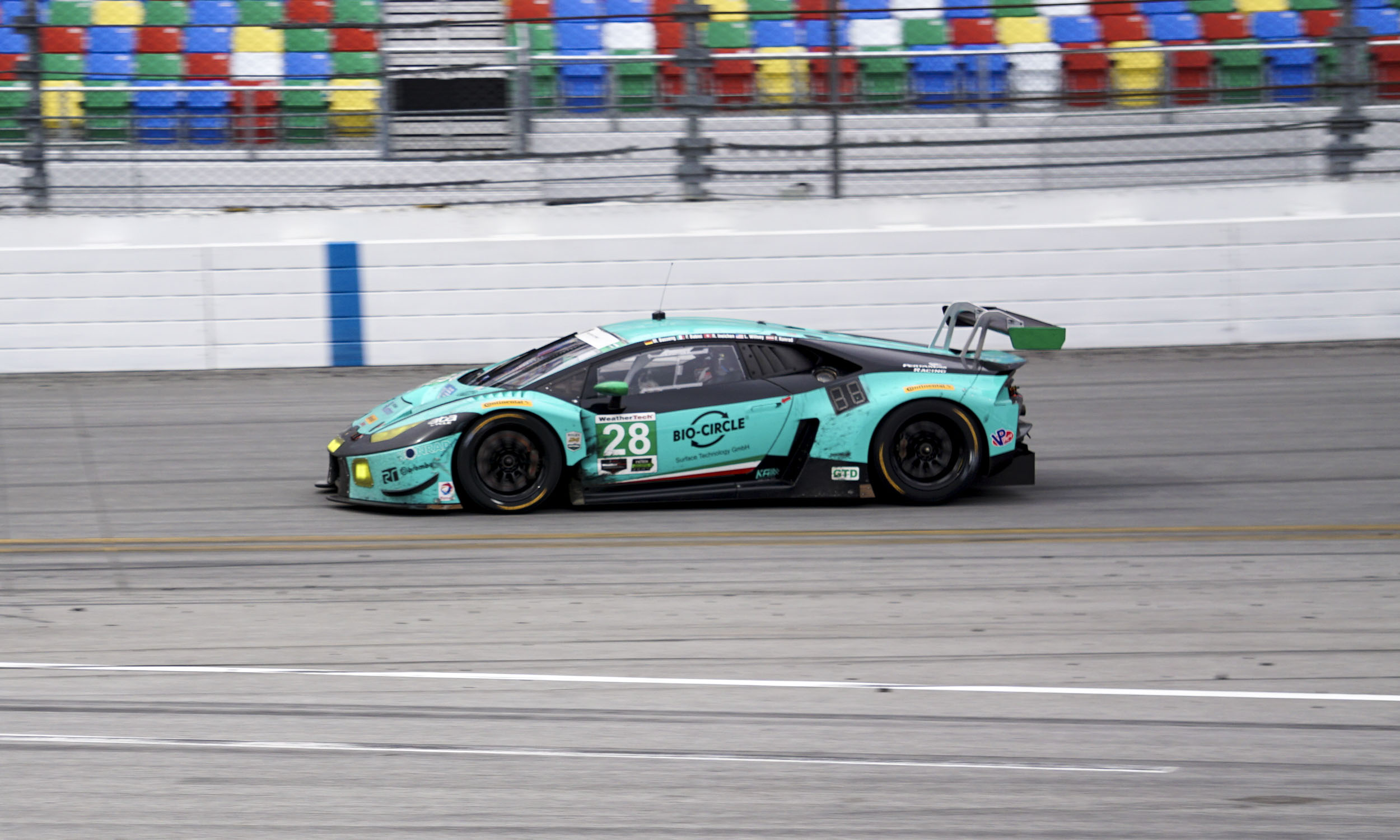 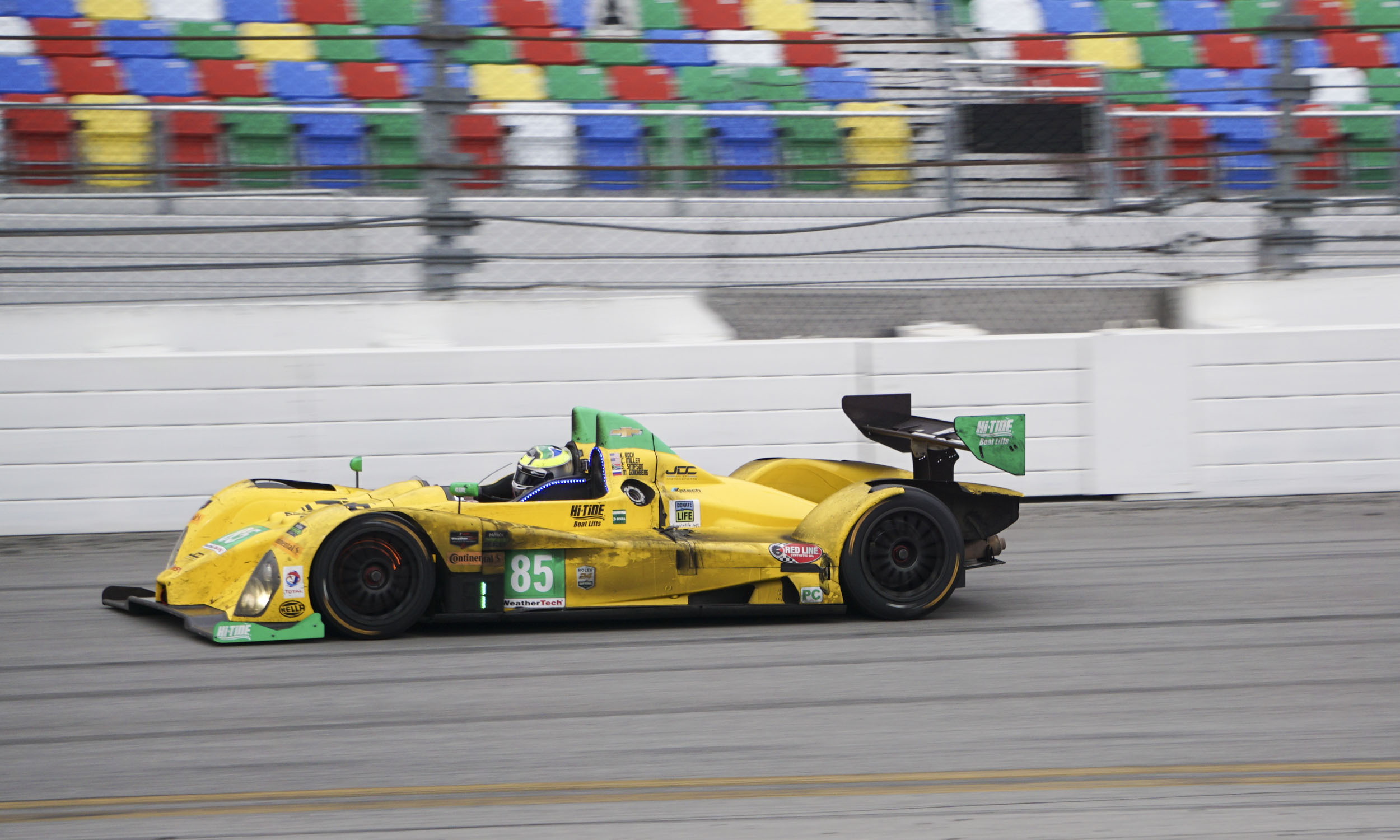 © Mike Meredith Automotive Content Experience
Prototype Challenge
The finish in the Prototype Challenge class was not as close as the others, with the No. 85 JDC-Miller Motorsports Hi-Tide Boat Lifts/Red Line Oil ORECA FLM09 taking the victory by 4 laps over the No. 52 PR1/Mathiasen Motorsports entry. The No. 85 was in the class lead by 19 laps, after 15 hours when Kenton Koch spun on cold tires and hit a barrier. Repairing the damage cost the team 10 laps, but they retained the PC-class lead to the end of the race. Koch shared the driving duties in the No. 85 with Chris Miller, Stephen Simpson and Misha Goikhberg.