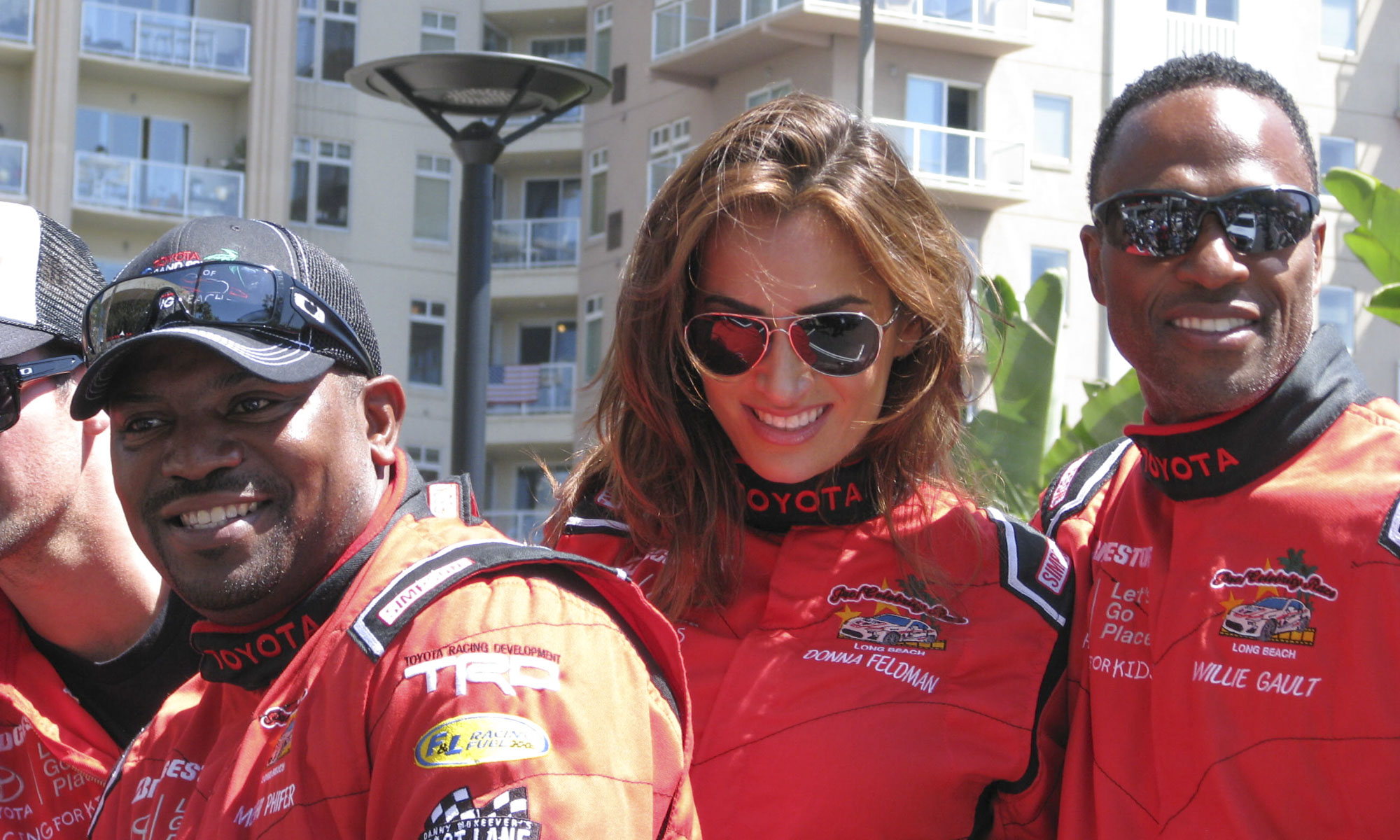 © Mike Meredith Automotive Content Experience
Celebrity Race
On Sunday, April 19, celebs from music, TV, movies and sports took to the streets of Long Beach in specially-prepared Scion FR-S cars for the 39th-annual Toyota Grand Prix of Long Beach Pro/Celebrity Race. The yearly event raises money for children’s hospitals, and occurs the day before the Toyota Grand Prix of Long Beach IndyCar race on the streets of Southern California. Alfonso Ribeiro won the charity race’s Pro division, and Dave Pasant won the Celebrity title with a last-lap pass of Joshua Morrow, who was the fastest qualifying celeb. 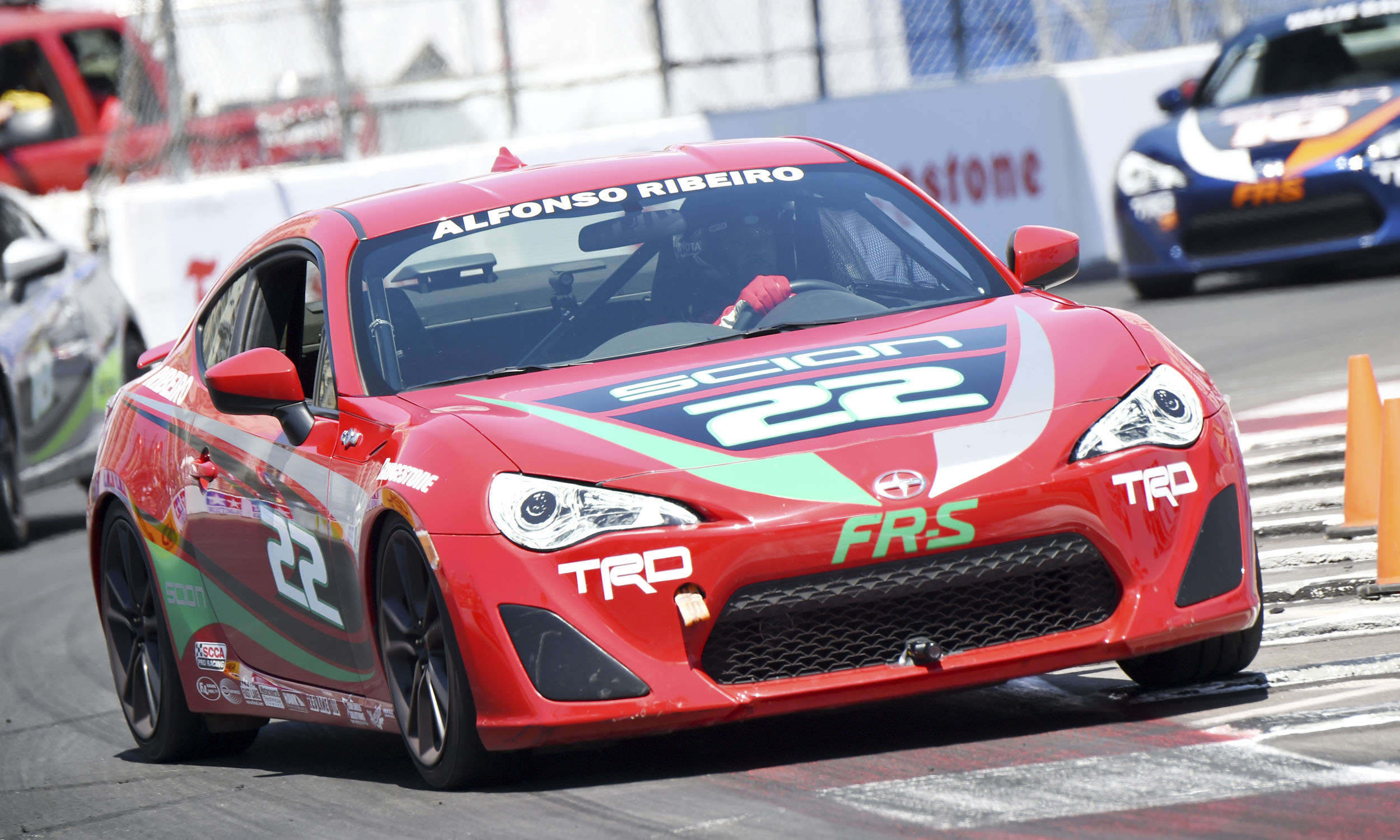 © Doug Gifford
Ribeiro Returns
Alfonso Ribeiro, who previously won the Toyota Grand Prix of Long Beach Pro/Celebrity Race in 1994 and 1995, returned for the first time after a 19-year hiatus to win again. Ribeiro is best known for his role as Carlton from the ‘90s sitcom, “The Fresh Prince of Bel Air.” The actor also won the Mirror Ball trophy last year on “Dancing with the Stars.” 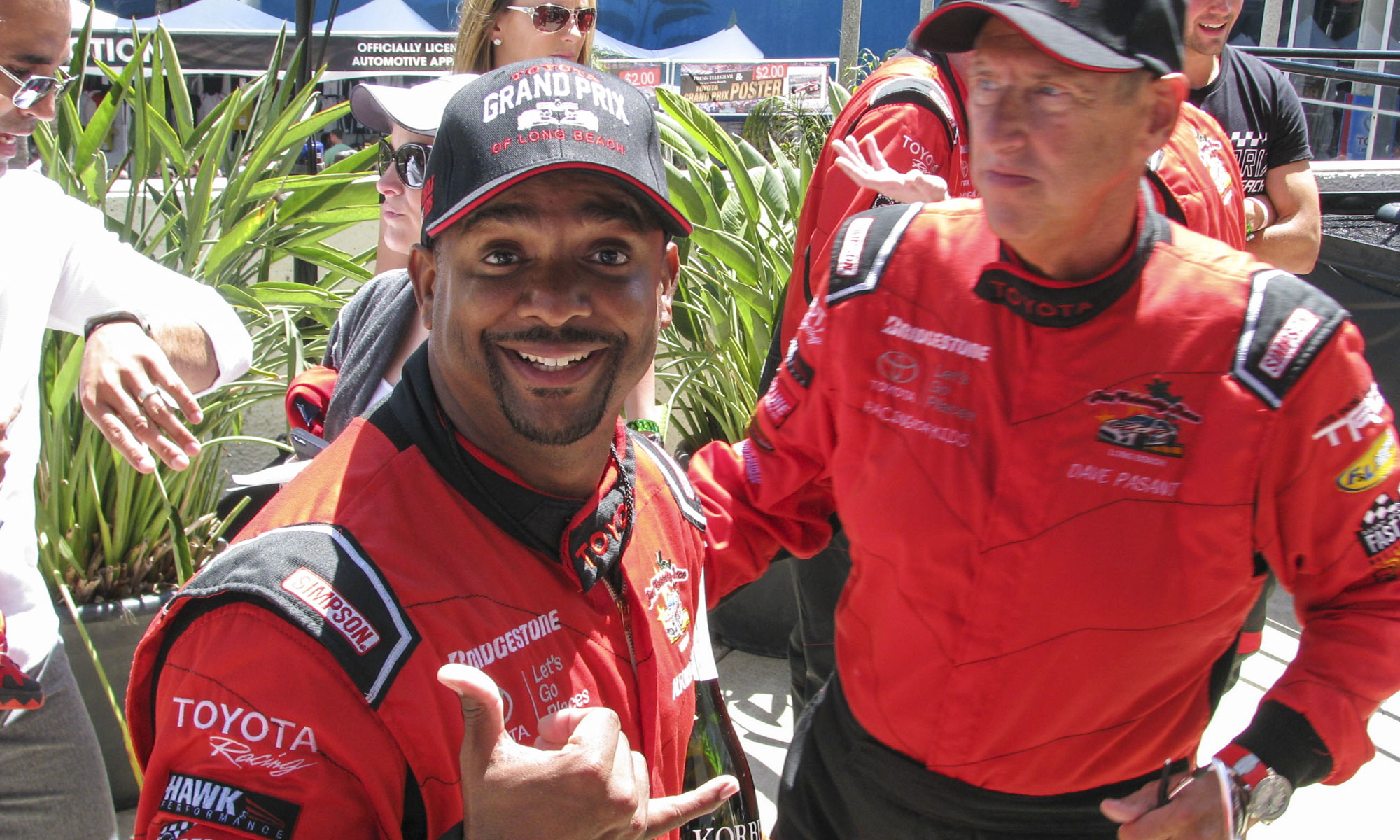 © Mike Meredith Automotive Content Experience
Ribeiro Now a Pro
For this year’s race, Ribeiro was classified as a Pro based on his two previous wins. Despite posting the fastest overall speed in qualifying, he started the race in 14th position behind all the Celebrity racers. The group of five Pro drivers started with a 30-second handicap behind the celebs, but Ribeiro was still able to make up the deficit and take the win. By the fourth lap of the race Ribeiro had passed Morrow for the overall lead. Once at the front, Ribeiro never looked back, finishing more than 15 seconds ahead of Pasant in second place. 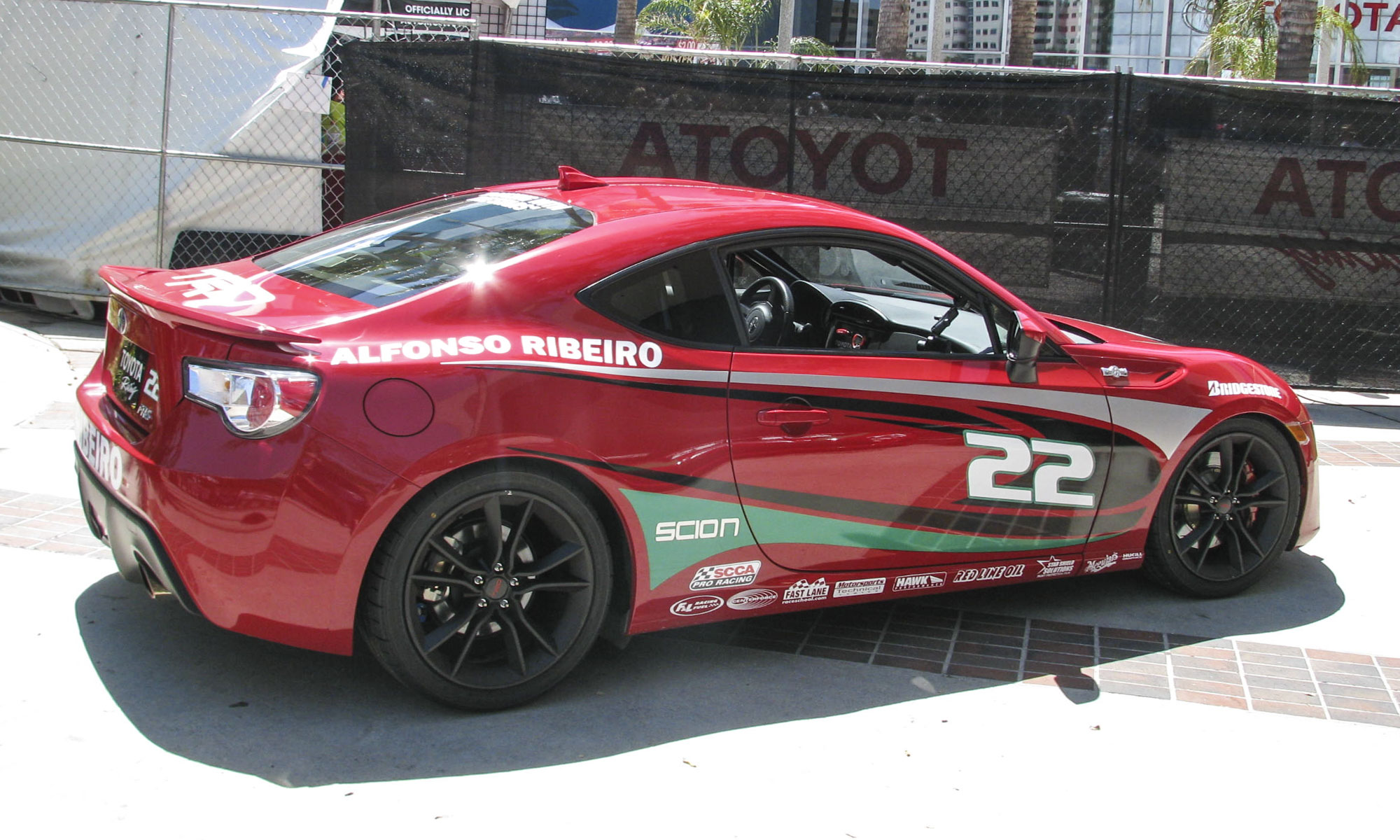 © Mike Meredith Automotive Content Experience
Great Win for Kids
“It’s great to be back in Long Beach,” Ribeiro said after the race. “But at the end of the day, it is all about the kids. When we walk into the rooms at Miller Children’s Hospital, wow, that’s what it is all about. This was a great year, we had such a tight group, we had fun, we talked racing and we became a family.” 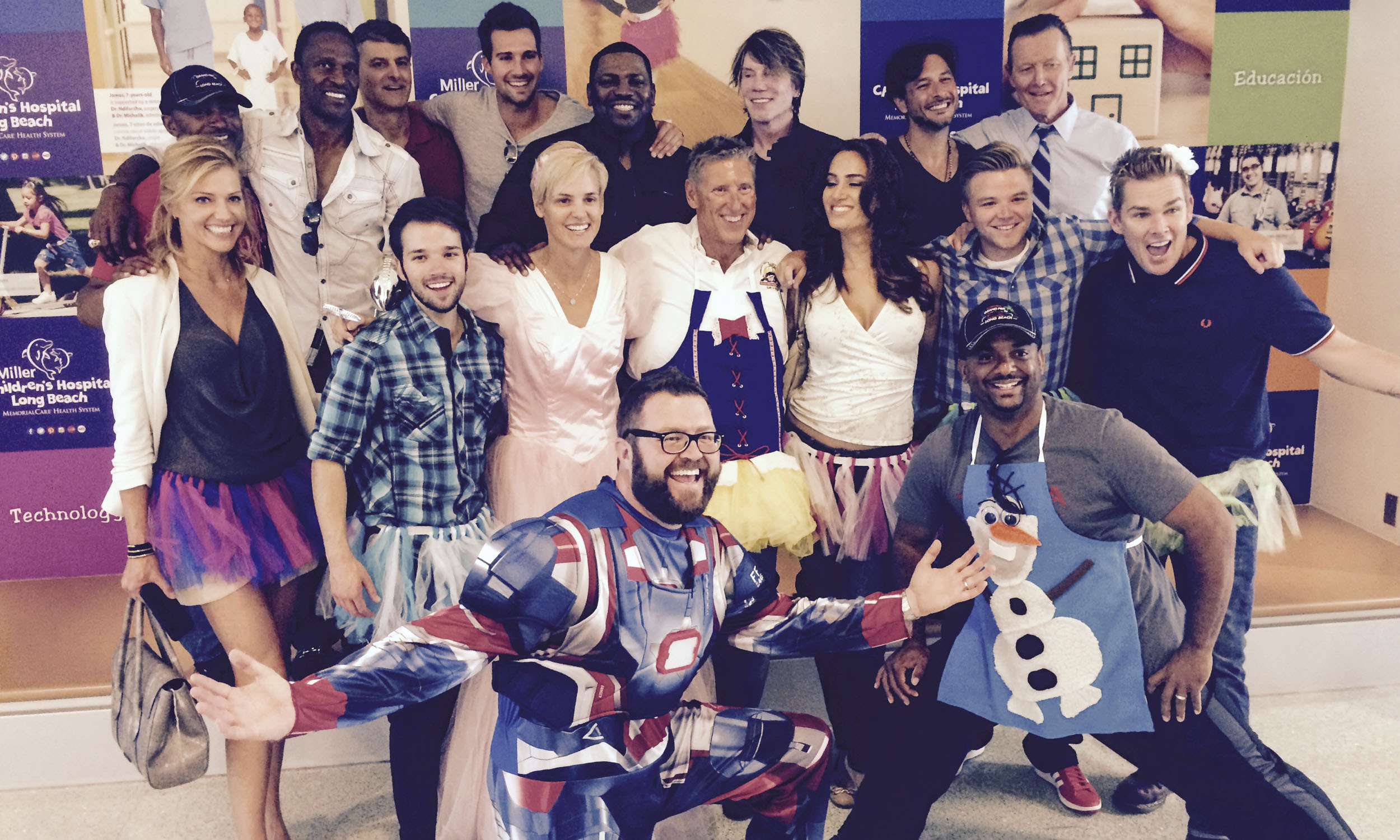 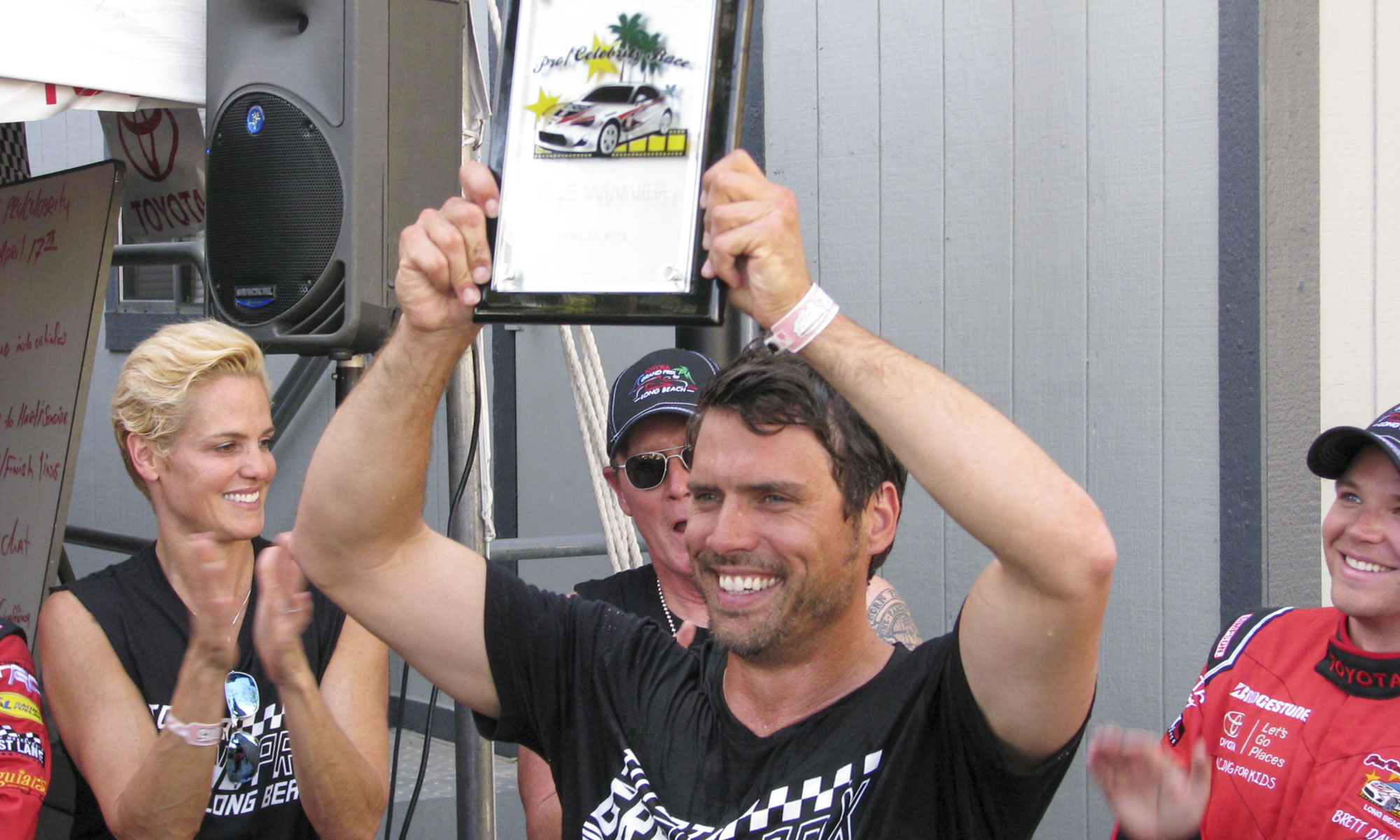 © Mike Meredith Automotive Content Experience
Morrow Takes Pole Position
Joshua Morrow returned for his fourth Pro/Celebrity race to earn the pole position for the race, posting the fastest lap time of the celebrity racers. Morrow, who last raced at Long Beach in 2007 and stars as Nicolas Newman on the daytime drama “The Young and the Restless,” was aiming for the top spot. “This is an incredible honor,” Morrow said. “I woke up this morning and tried to convince myself that the pole position wasn’t important, but I was lying to myself. I caught the racing bug in 1998 after my first race and I am so honored and humbled to be invited back.” 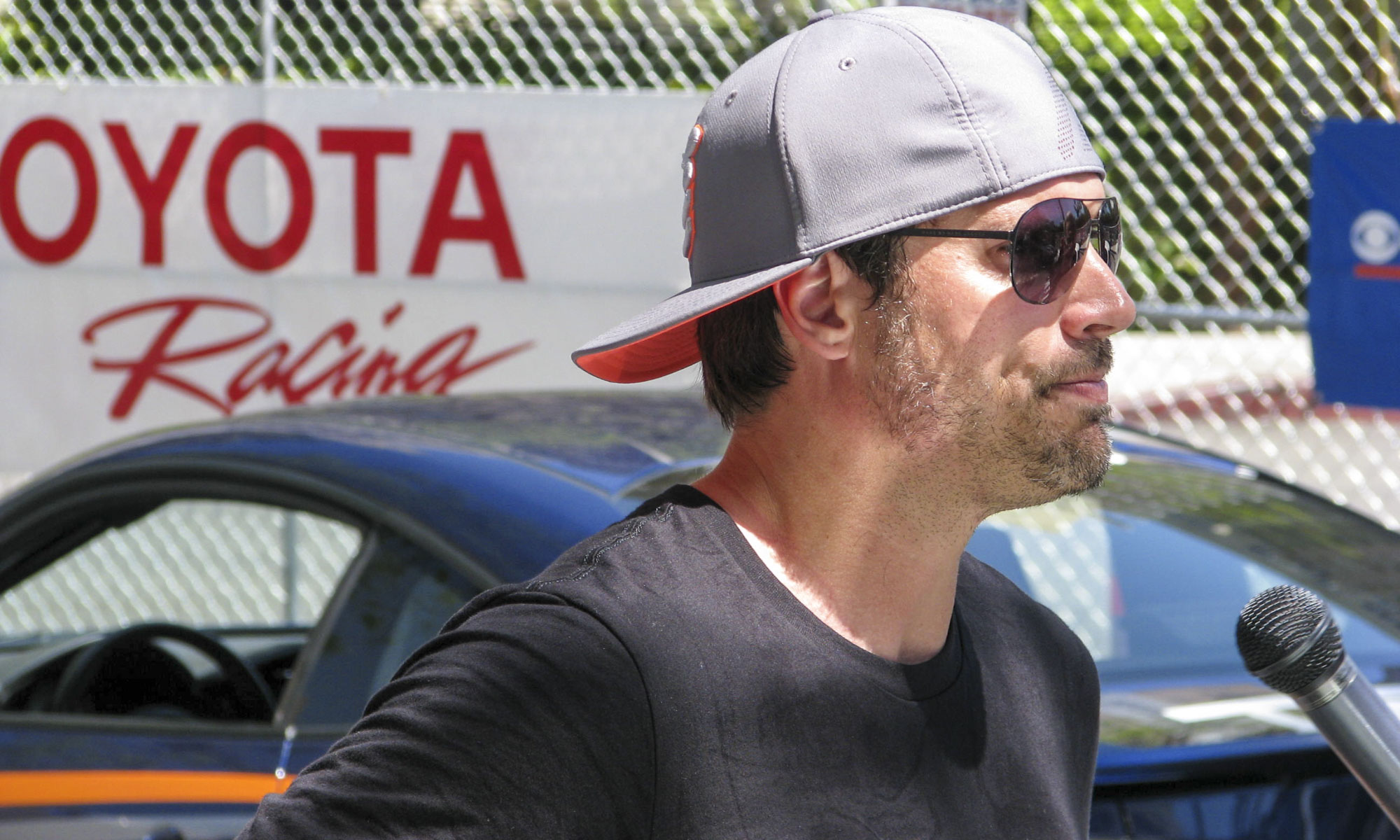 © Mike Meredith Automotive Content Experience
Morrow Leads from the Green Flag
After the race, Morrow kept a stiff upper lip but couldn’t hide the disappointment of losing the win in the last corner. Morrow used his front-row starting position to take the lead from the green flag, and he led the Celebrity division into the last lap. Pasant had advanced from his fourth starting position to challenge for the lead, bumping Morrow in the final corner and causing a spin. Morrow dropped from second position overall and first in the Celebrity division to tenth overall. 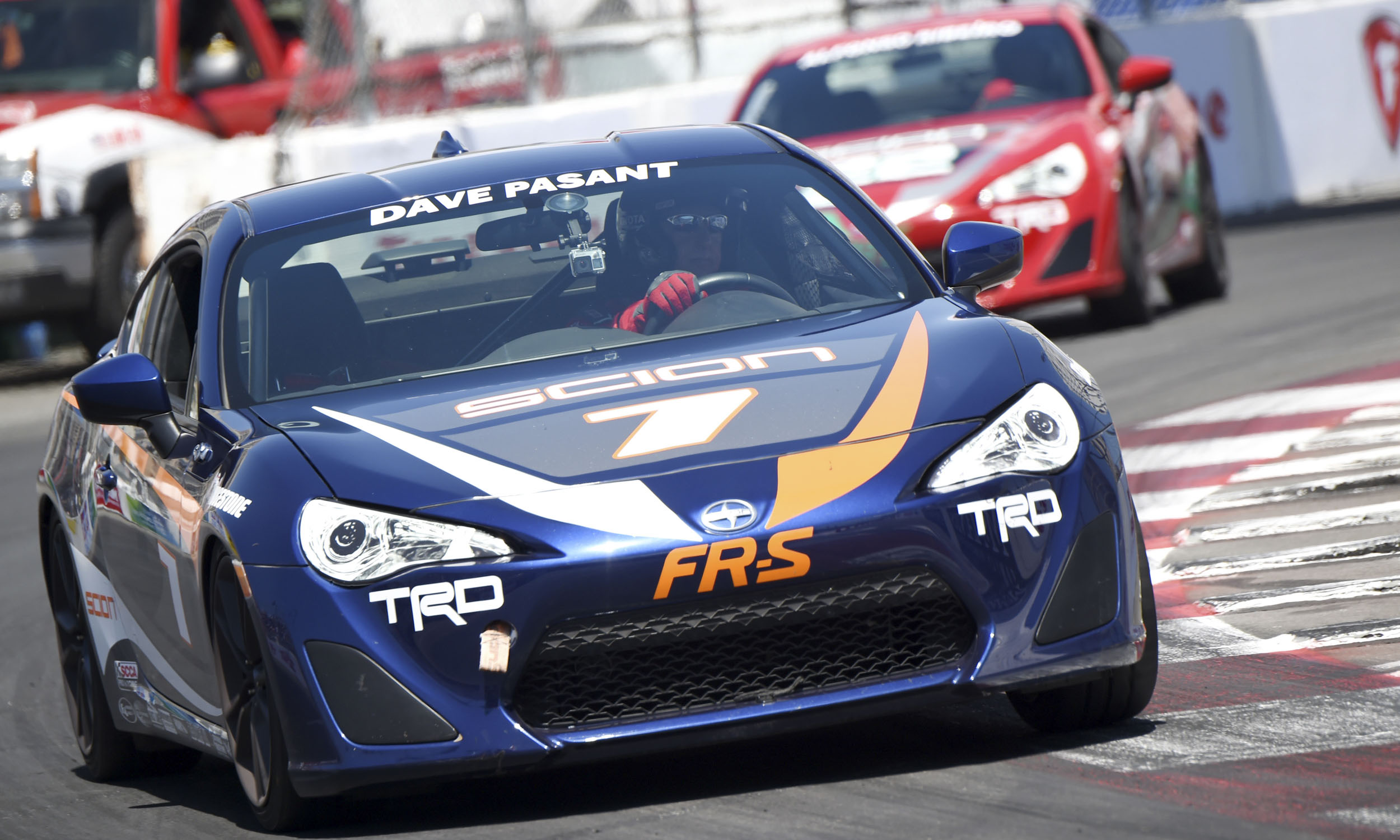 © Doug Gifford
Pasant Takes Celebrity Win
Although Pasant was happy to take the victory in his sixth Toyota Pro/Celebrity start, it didn’t happen the way he had planned — he went into the final corner a bit too hot. “This win is bittersweet for me,” Pasant said in a post-race press conference. “My heart goes out to him (Morrow), and that certainly wasn’t the finish I had hoped for — I wanted to race Josh to the (checkered) flag.” Pasant is a retired insurance executive and film producer who purchased the Pro/Celebrity race entry at auction. 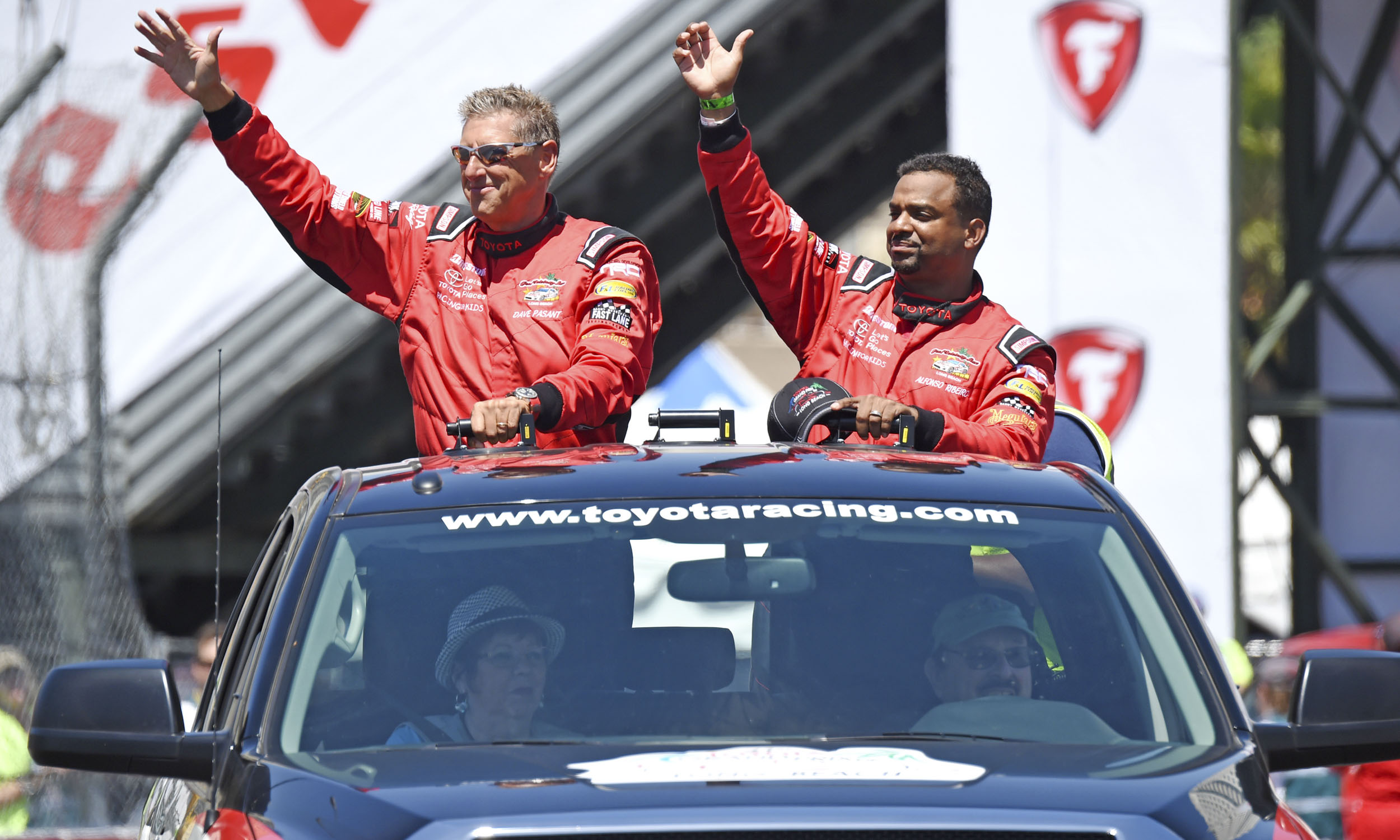 © Doug Gifford
Ribeiro and Pasant Take Victory Lap
After the race, overall winner Ribeiro and celebrity winner Pasant took a victory lap around the circuit to thank the fans. A longtime sponsor of the Toyota Grand Prix at Long Beach, the automaker has donated more than $2 million to children’s hospitals since 1991 on behalf of the race and race participants. 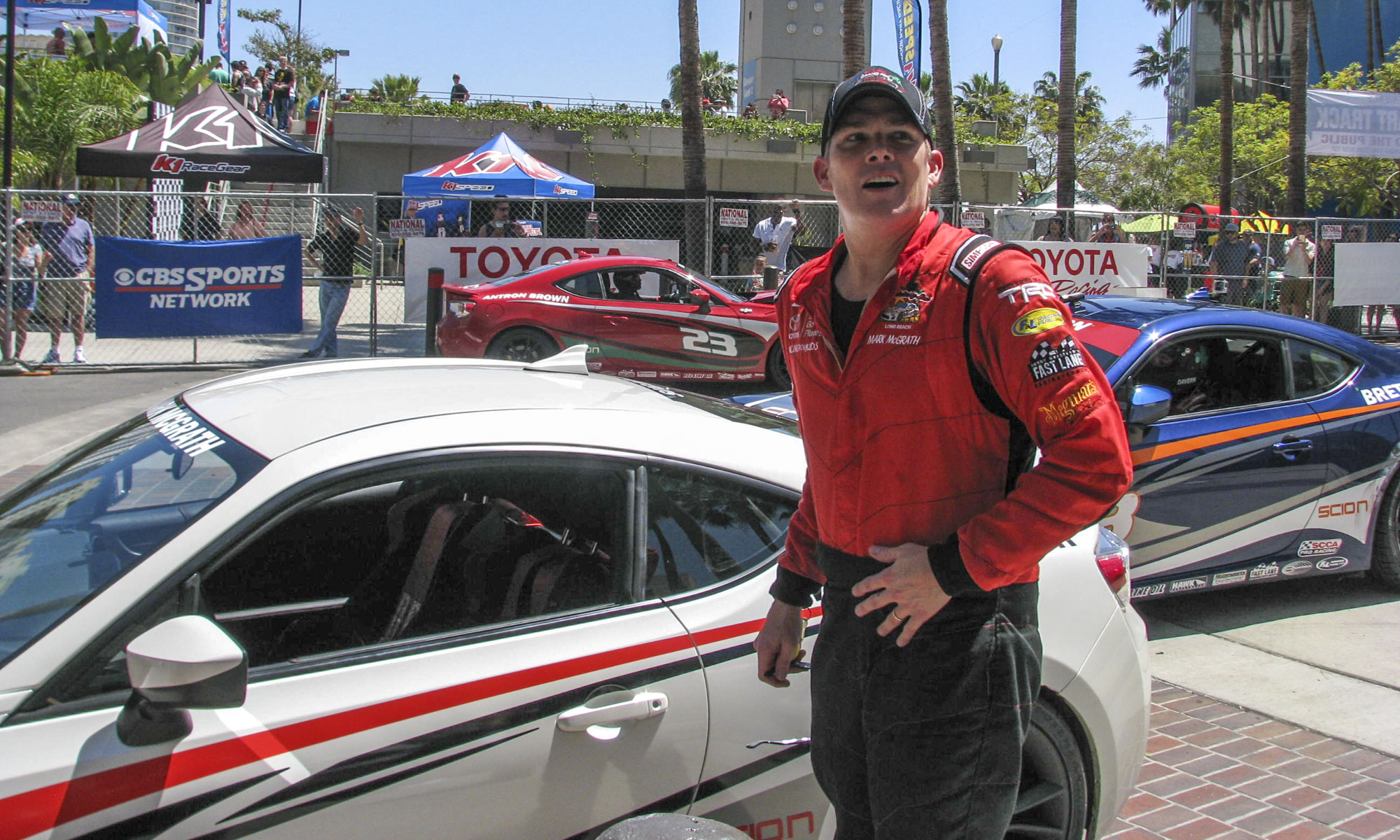 © Mike Meredith Automotive Content Experience
Mark McGrath Most Enthusiastic
While there was a high level of fun, comraderie and enthusiasm throughout the Pro/Celebrity ranks, one competitor having the most fun was Mark McGrath, lead singer of Sugar Ray. After qualifying, McGrath excitedly pointed to the timesheet and exclaimed “I’m 14th!” “I drive a minivan and I’ve never had a speeding ticket,” he joked. “When they called me to do this, I said ‘No Way,’ I was scared to death. Then I realized this is a bucket list kind of thing and I had to do it.” McGrath finished fifth among the celebrities and ninth overall. 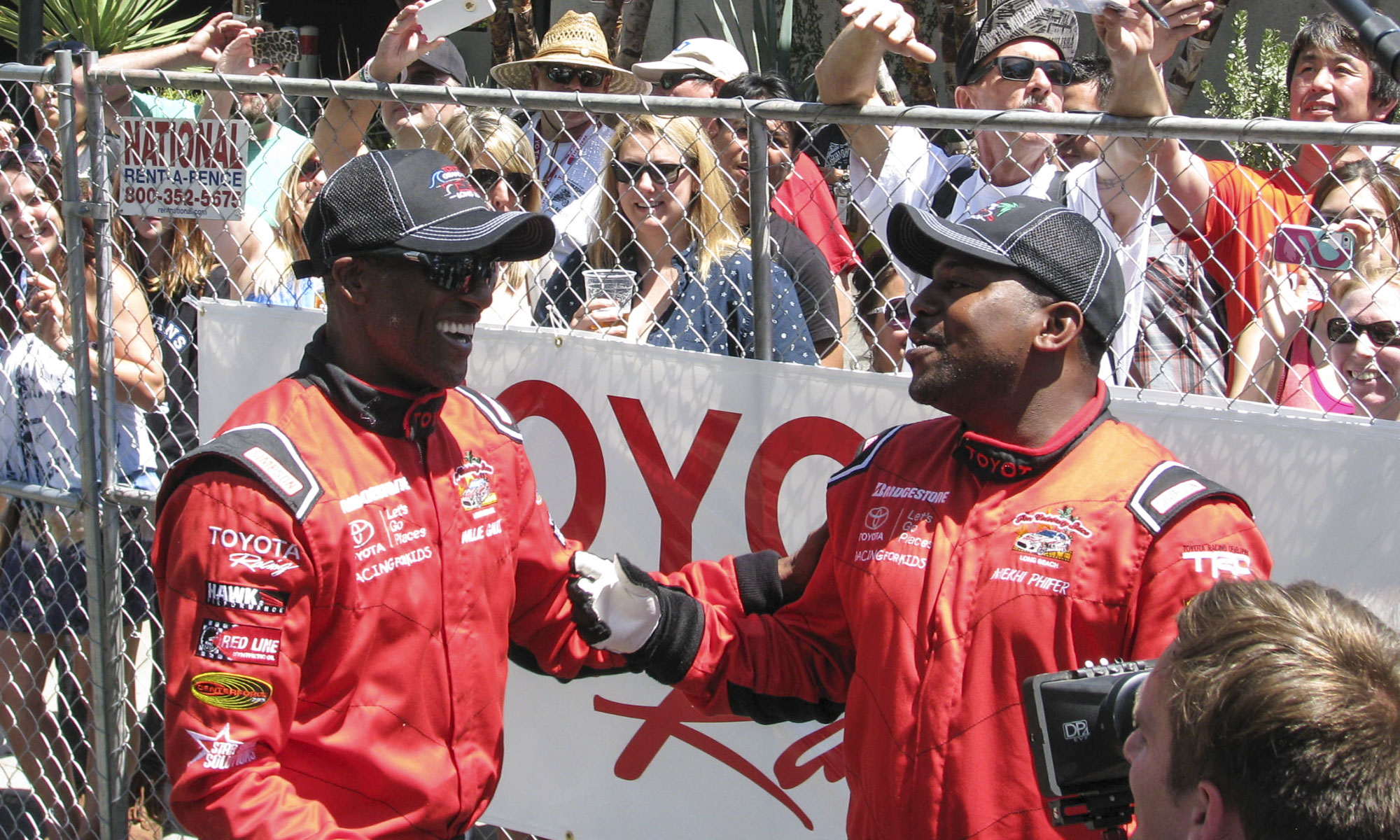 © Mike Meredith Automotive Content Experience
Mekhi Phifer
Another enthusiastic competitor new to the race was actor Mekhi Phifer, who crashed — twice — during the race. “The first time I went into the tires, I was driving real hard,” explained Phifer. “I was laughing my ass off and as long as the car would start, I knew I was fine.” Even after the second crash, Phifer — who is best known for his role as Dr. Greg Pratt on “ER” — kept his great attitude. “The second time I crashed, the fans were over by the fence. I honked the horn three times, backed up and kept on going.” 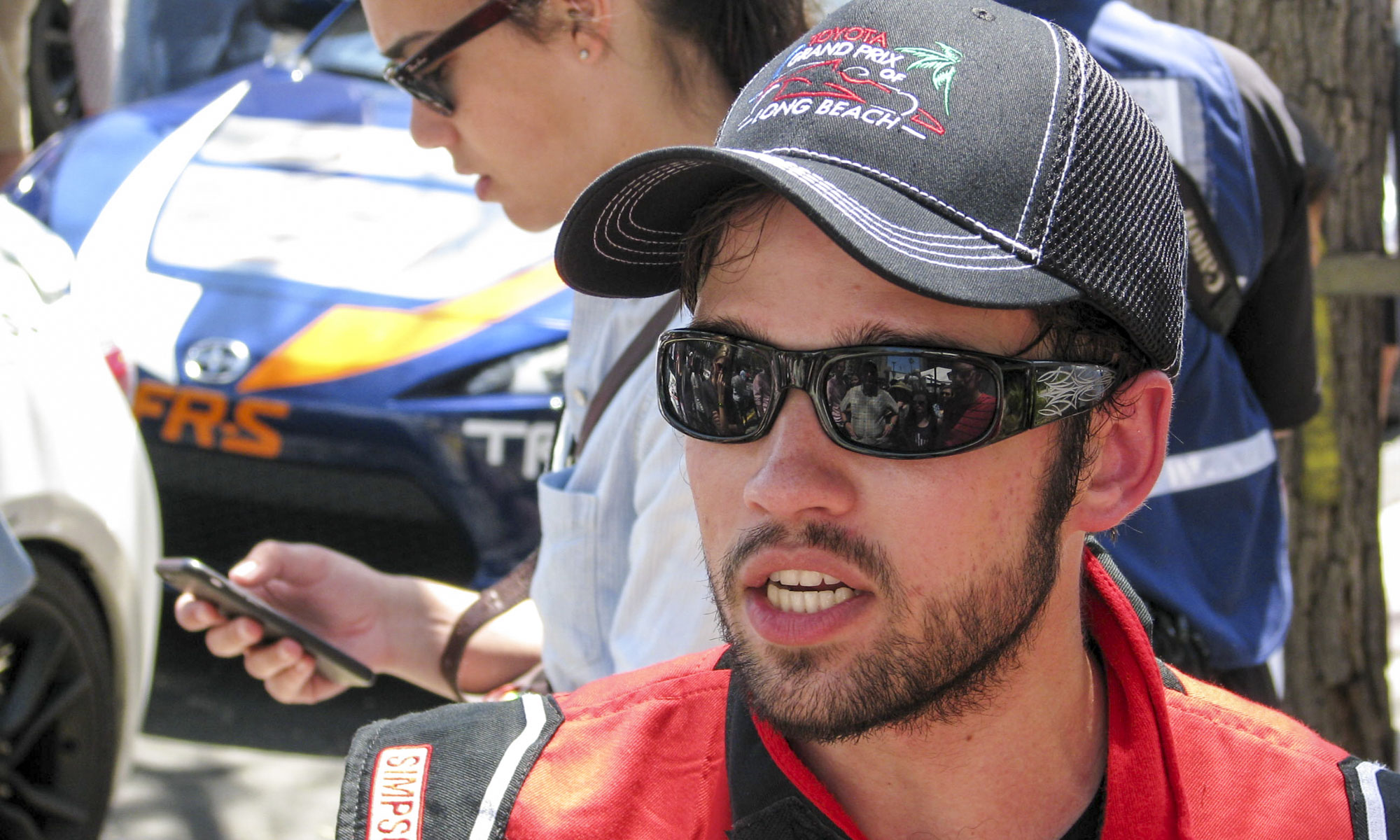 © Mike Meredith Automotive Content Experience
Nathan Kress
Known for his role as Freddie Benson on the teen sitcom “iCarly,” Nathan Kress ran a fast, clean race to finish second of the celebrities and third overall. Robert Patrick, star of “Scorpion” on CBS, was third among the celebrities. 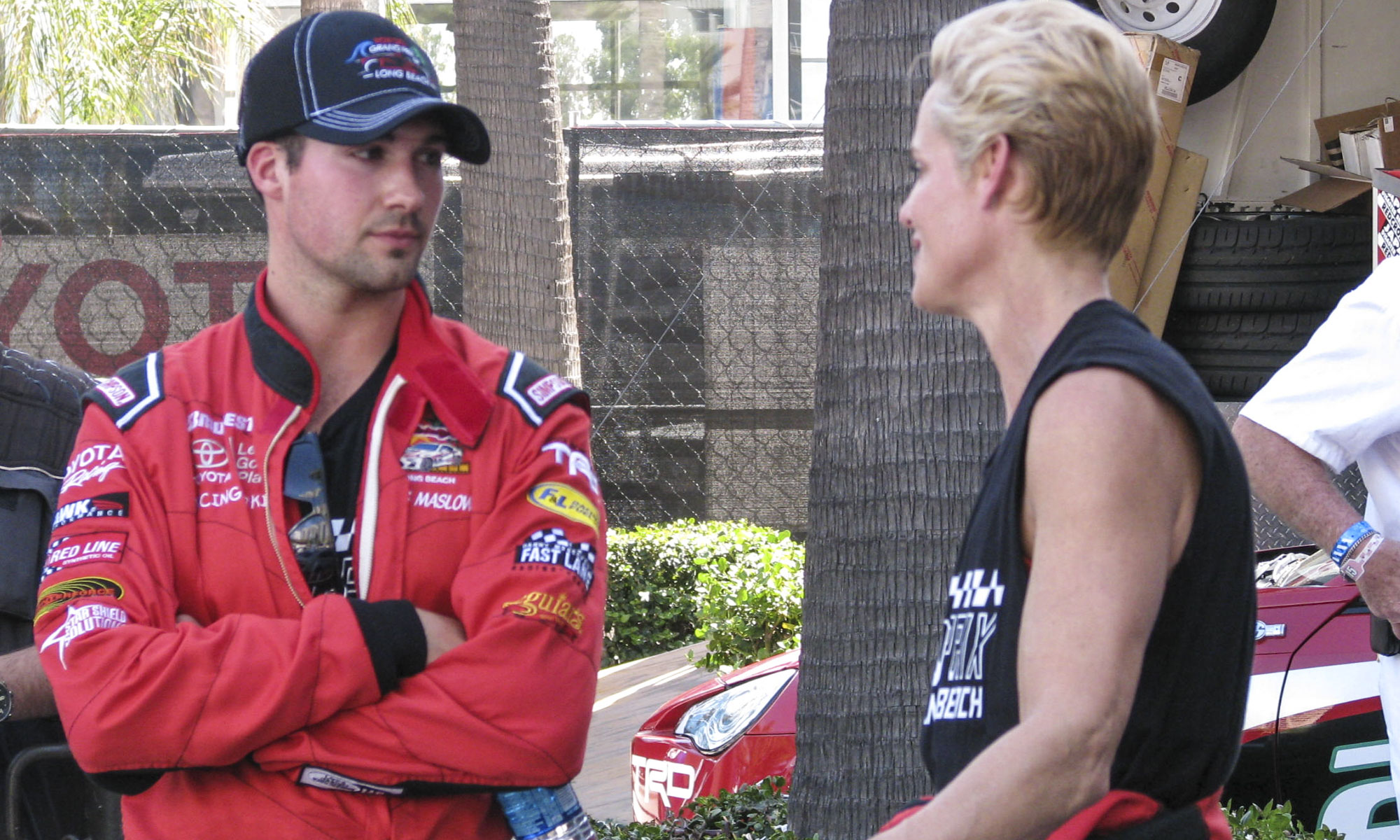 © Mike Meredith Automotive Content Experience
James Maslow and Dara Torres Discuss Qualifying
James Maslow, who played James Diamond in “Big Time Rush” on Nickelodeon, qualified eighth fastest of the celeb drivers. Swimmer Dara Torres, a 12-time Olympic medalist, was the first female winner of the Pro/Celebrity race when she won in 2002; she raced again in 2003 as a Pro driver. This year Torres qualified sixth fastest, but had to start 30 seconds back with the other four Pro drivers. She finished fifth overall and third among the Pros. 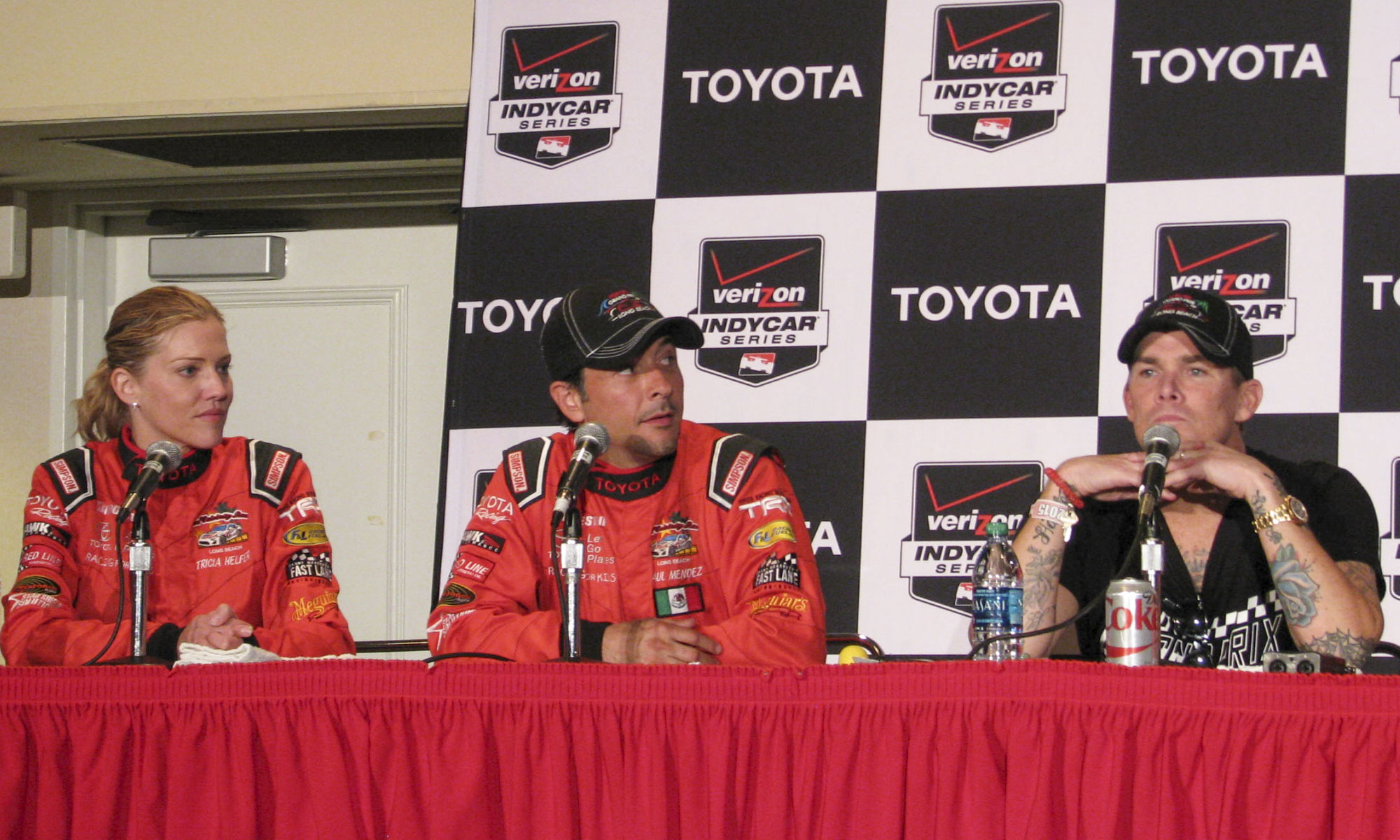 © Mike Meredith Automotive Content Experience
Mehki Phifer, Donna Feldman and Willie Gault Pre-Race
Actor Mehki Phifer, fashion model and TV host Donna Feldman, and former NFL player and Olympian Willie Gault ride down to the grid together. Gault actually had the fastest race lap of all the Celebrity drivers, but pushed a little too hard and ended up in the tires at the exit of the first turn, where he was hit by Antron Brown, reigning NHRA Top Fuel Champion. Gault was unable to finish the 10-lap race. 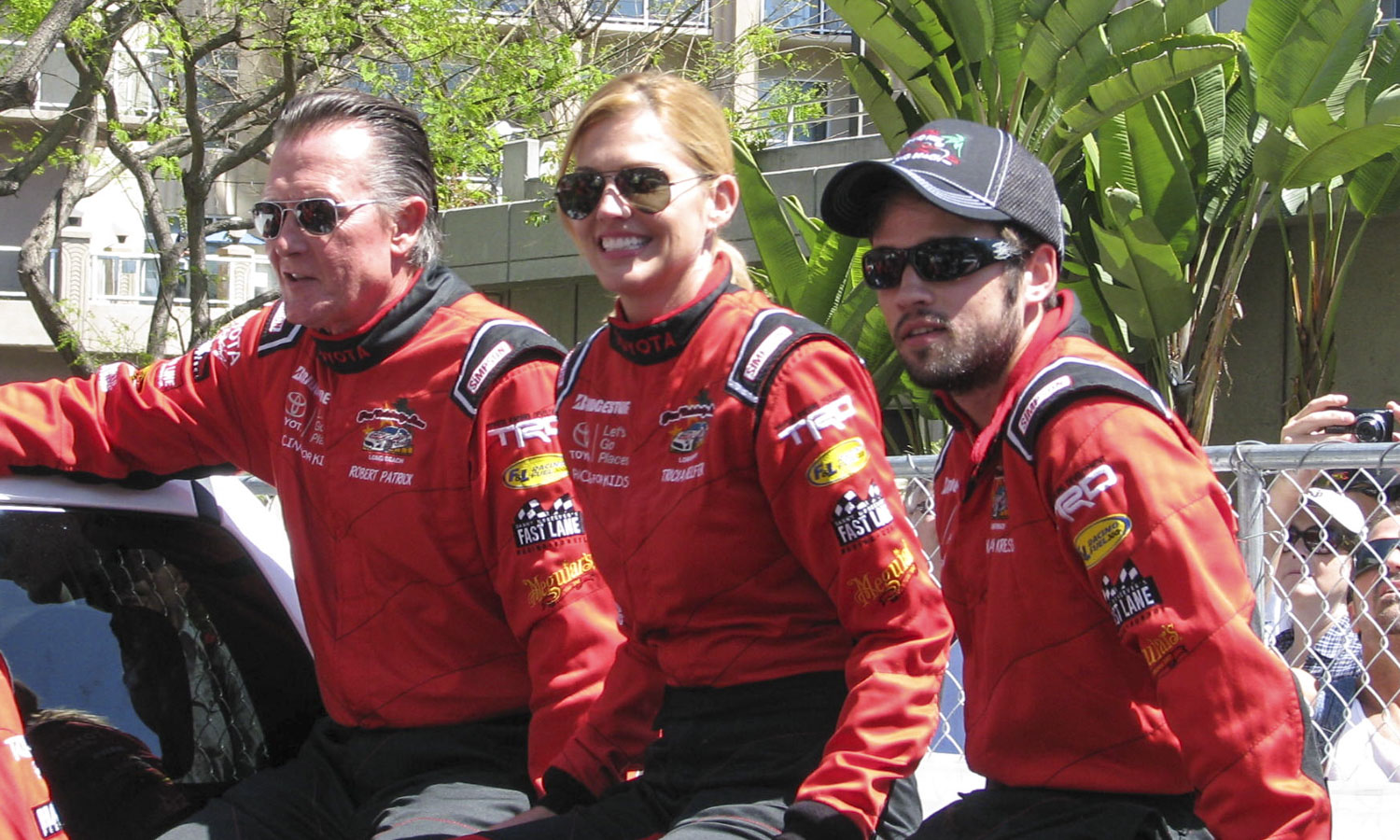 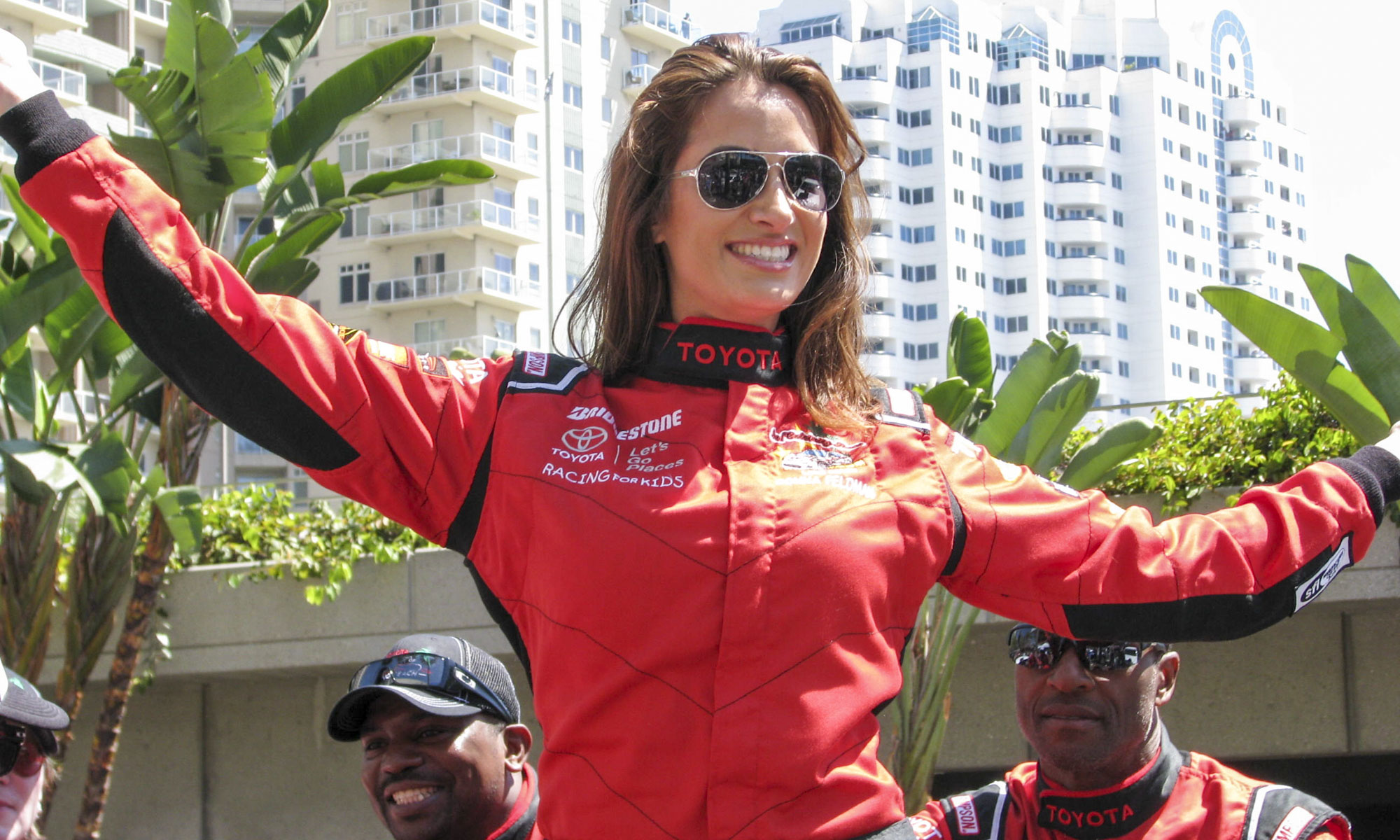 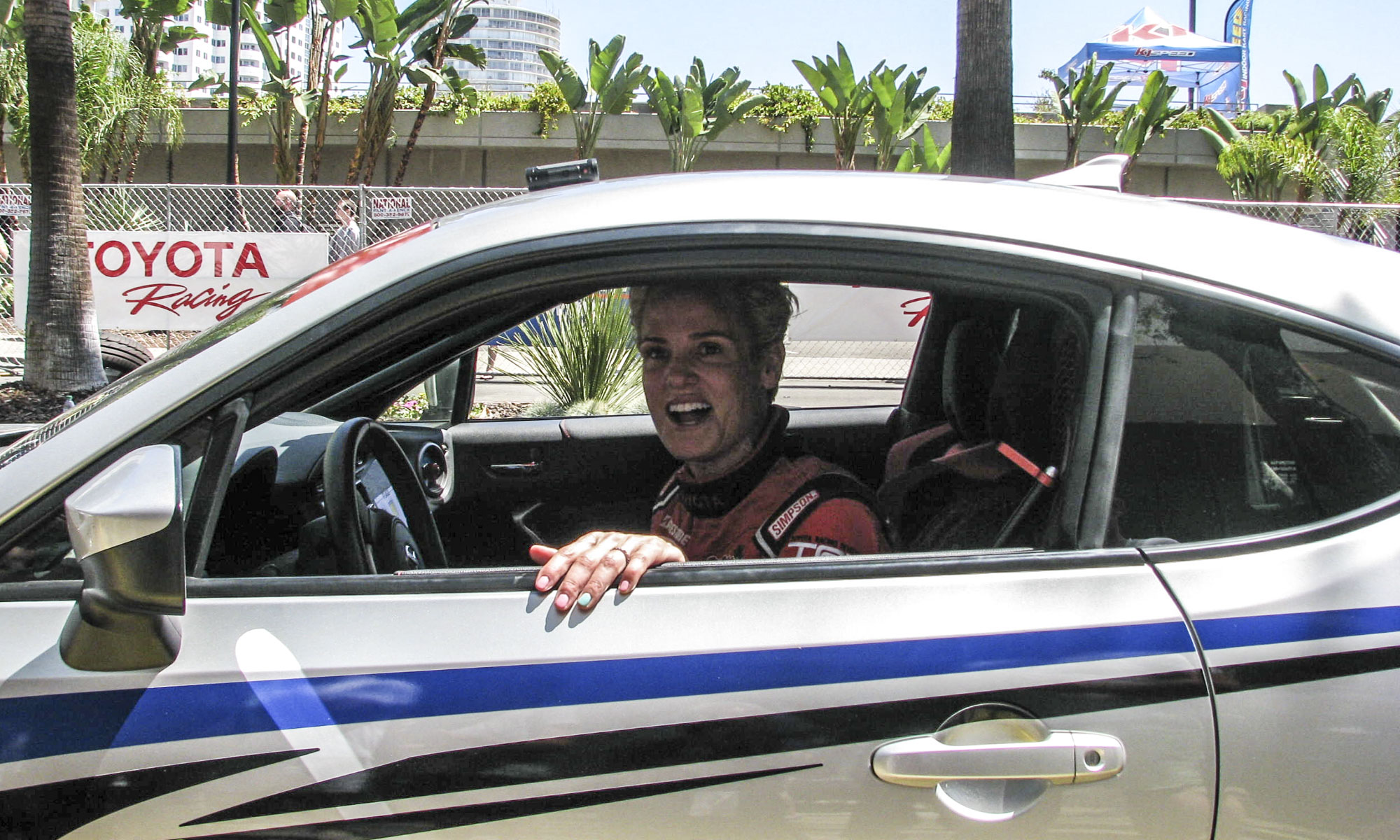 © Mike Meredith Automotive Content Experience
Dara Torres Finishes the Race
The Pro/Celebrity race winner in 2002, Dara Torres finished this year’s race with a big smile on her face. Torres started from the 18th grid position —30 seconds back, with the other Pro drivers — and drove through the field for an impressive fifth-place finish. 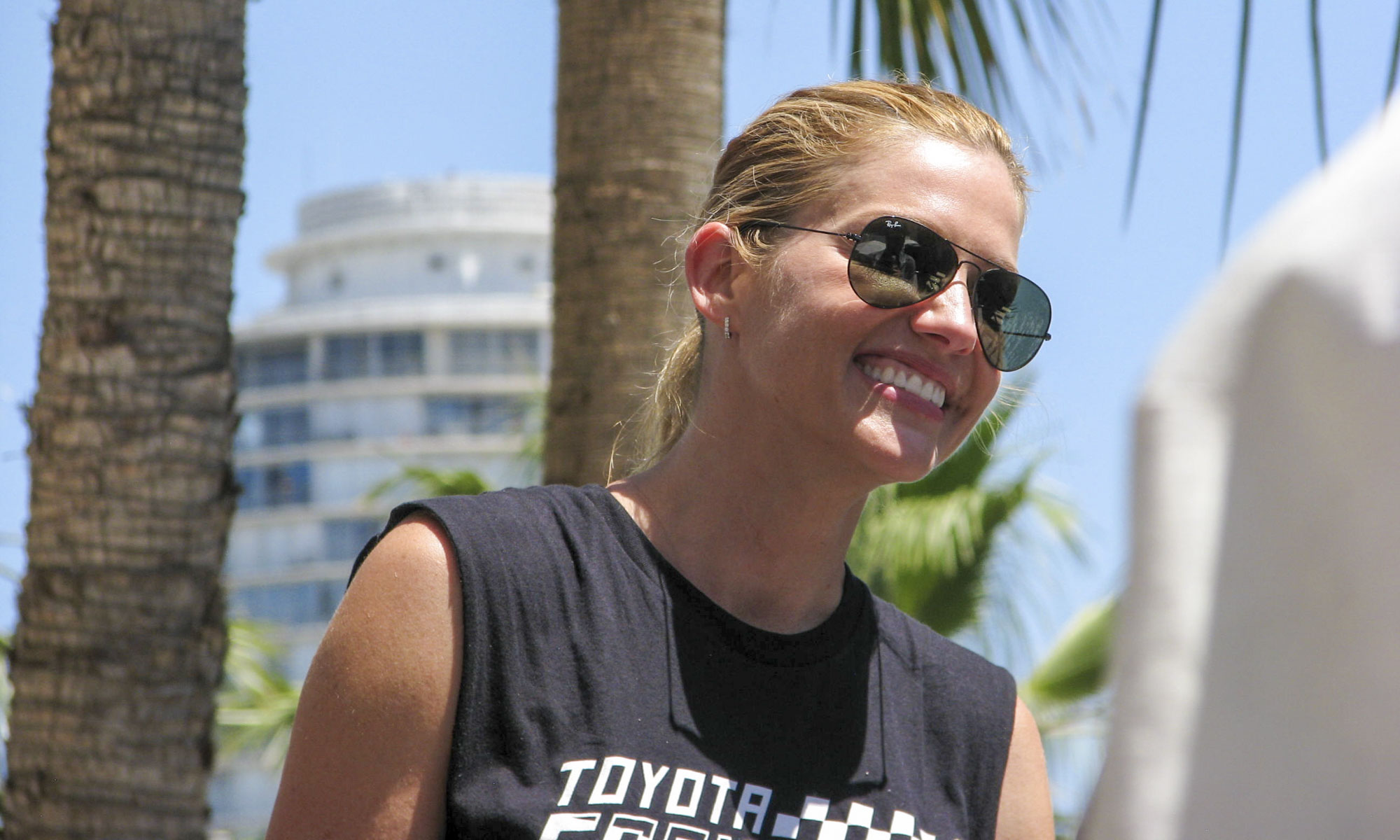 © Mike Meredith Automotive Content Experience
Tricia Helfer Post-Race Interview
Helfer competed in her second straight Toyota Pro/Celebrity race at Long Beach. In addition to her role on “Ascension,” she is well known for her role as Cylon Number Six on the series “Battlestar Galactica.” She also recently completed a guest appearance as Evan Smith on USA’s hit series “Suits.” 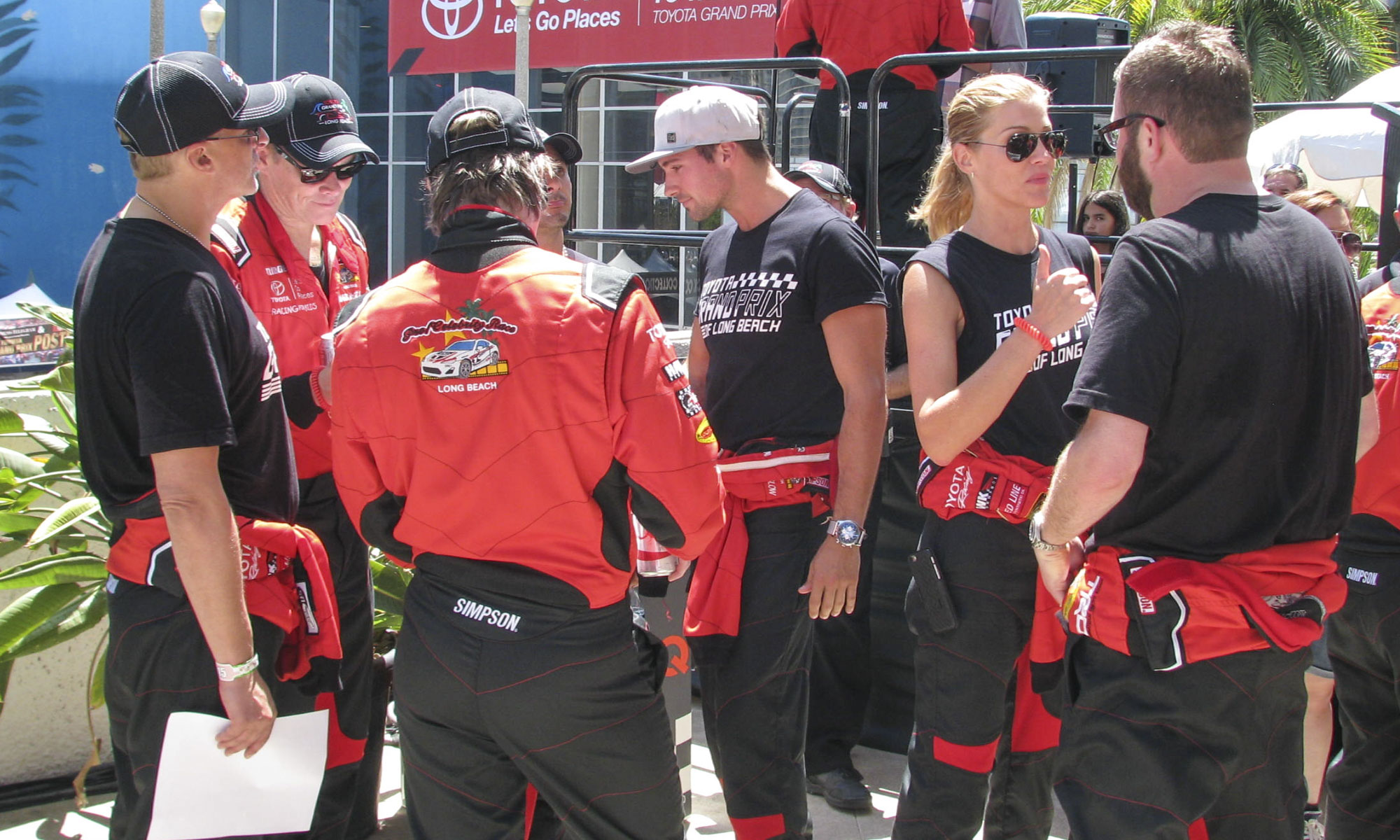 © Mike Meredith Automotive Content Experience
Post-Race Discussion
The Celebrity and Pro drivers gather to discuss the race. Many drivers who competed in previous Long Beach events noted that drivers this year were a particularly close-knit group who became friends quickly and enjoyed the experience together.