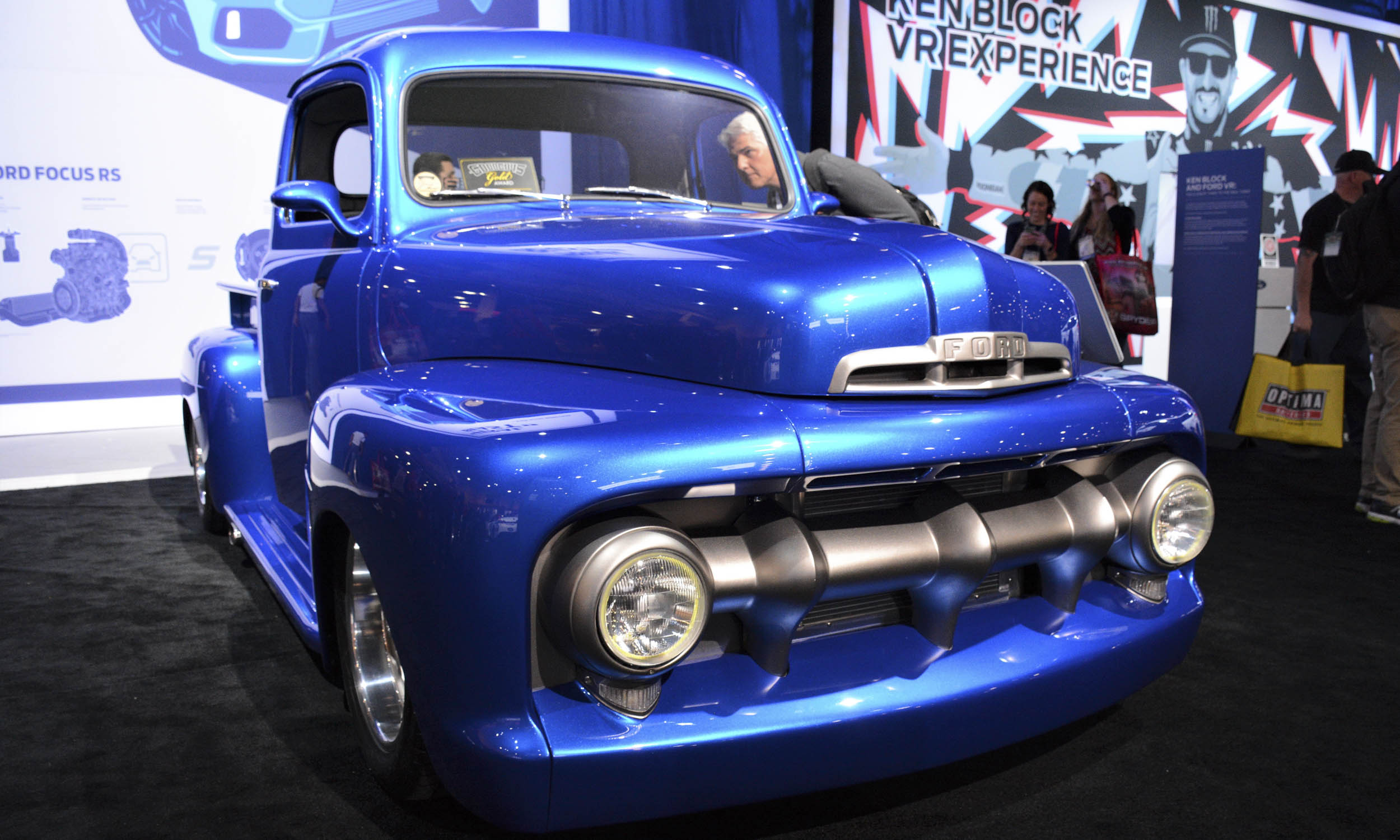 Truck Candy
Trucks are an American institution. Originally built as motorized farm hands, trucks have become more comfortable, accommodating and versatile as they have transitioned from fields at harvest to the daily commute at rush hour. They are also a great way to blow off steam on the weekends. The following collection of trucks captures the street style, off-road ruggedness and wrenching ability of American truck enthusiasts on display at the 2017 Specialty Equipment Market Association trade show in Las Vegas. 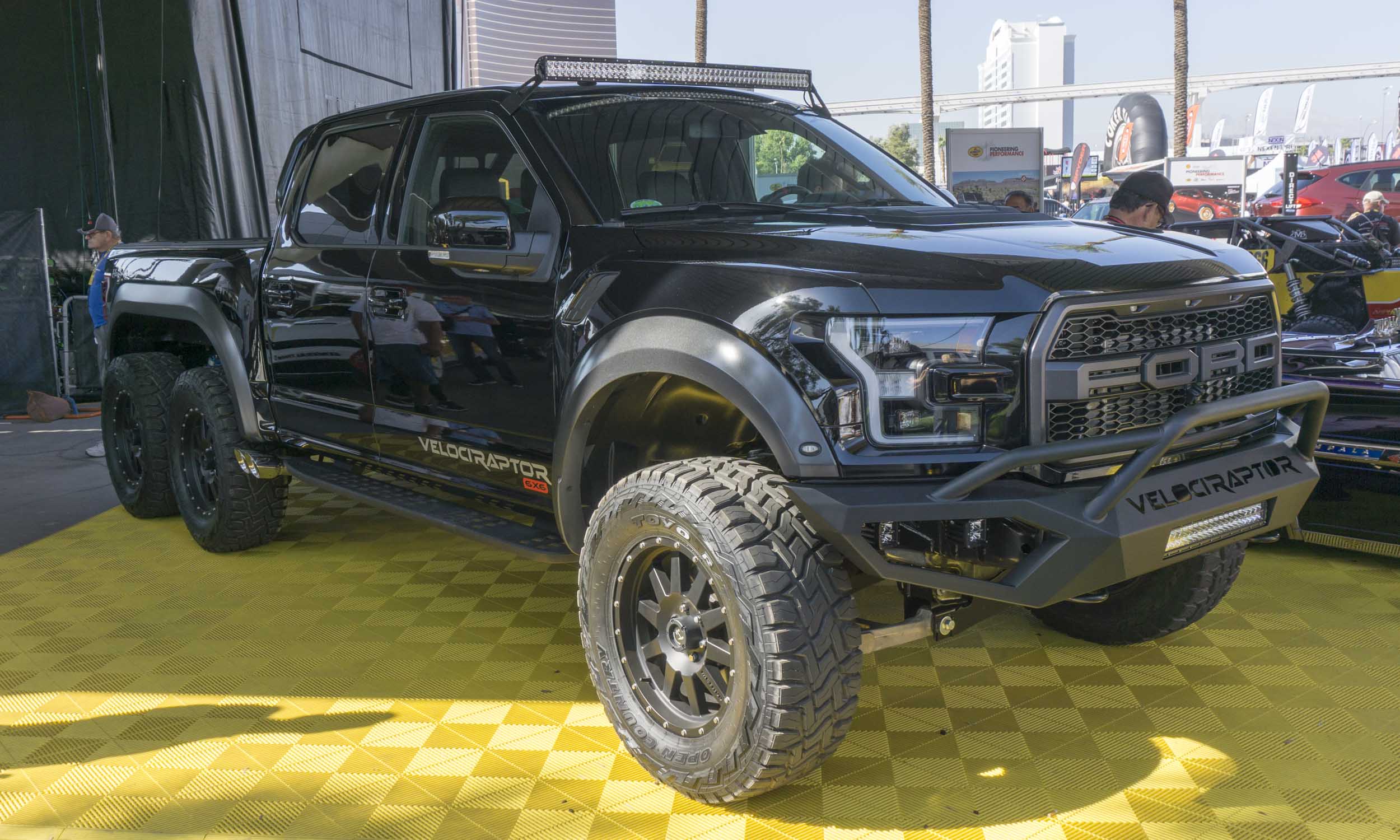 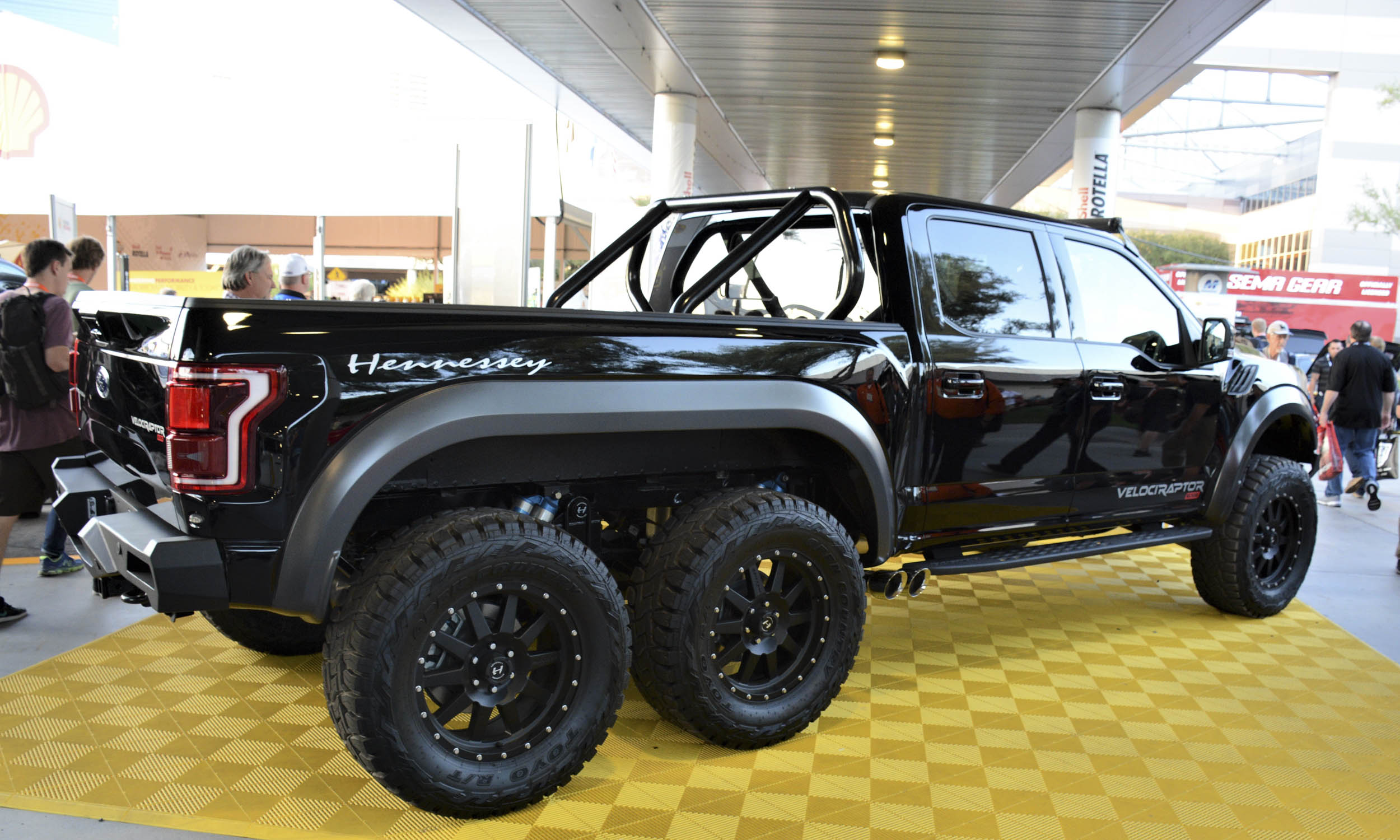 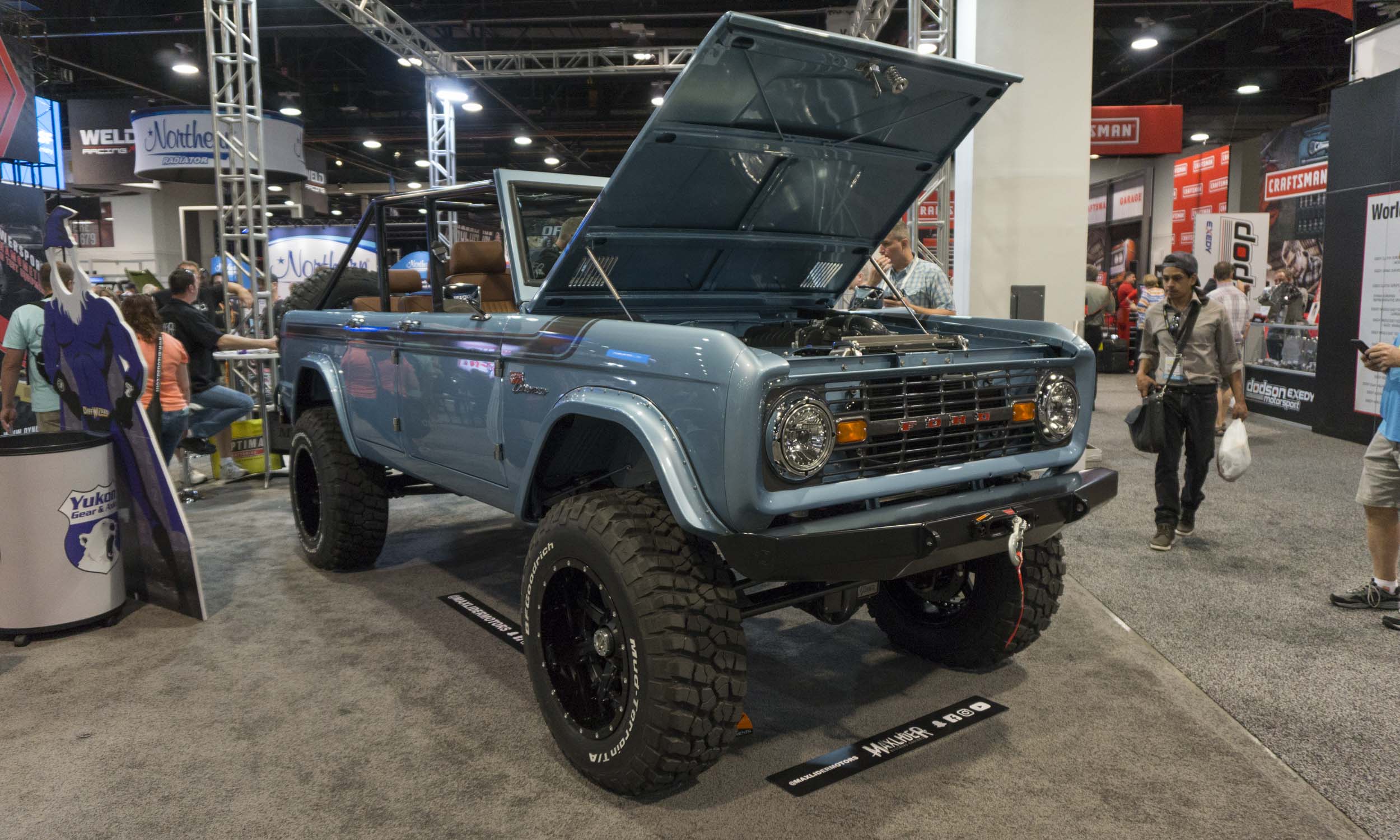 Maxlider Brothers Bronco
Maxlider Brothers Customs took a walk on the wild side when they conjured the idea to build a 4-door classic Bronco. The early Bronco is in the SEMA Battle of the Builders competition, and we love how it looks like a factory original piece that could have rolled off Ford’s own assembly line. The smooth blue exterior is set off by a custom-stitched tan leather interior. 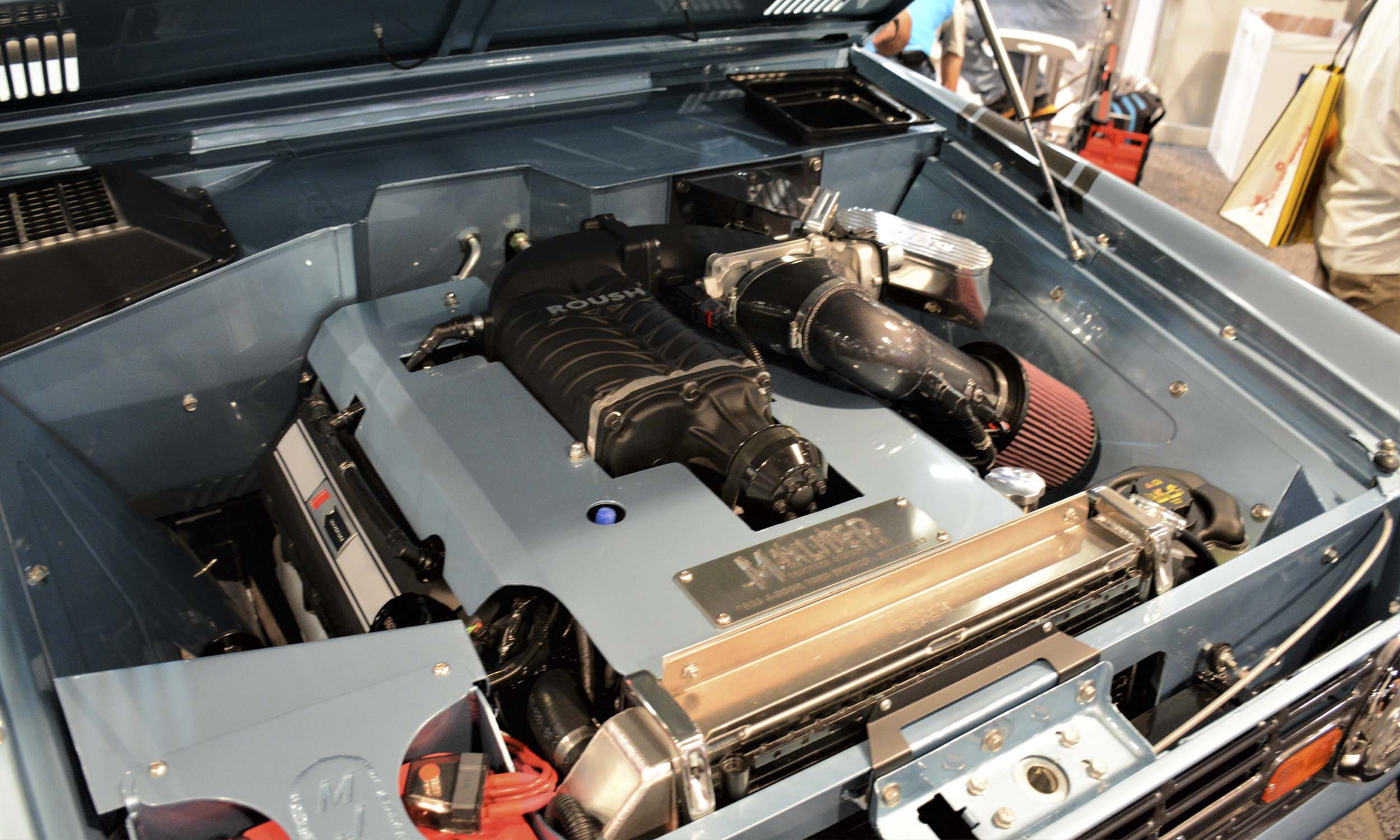 Maxlider Brothers Bronco
You can bet this Bronco is the leader of the herd — its 670-horsepower Roush supercharged Coyote V8 gives it the speed to succeed. The engine gets backed by a Mustang derived 6-speed manual transmission and a Yukon Gear & Axle powertrain. 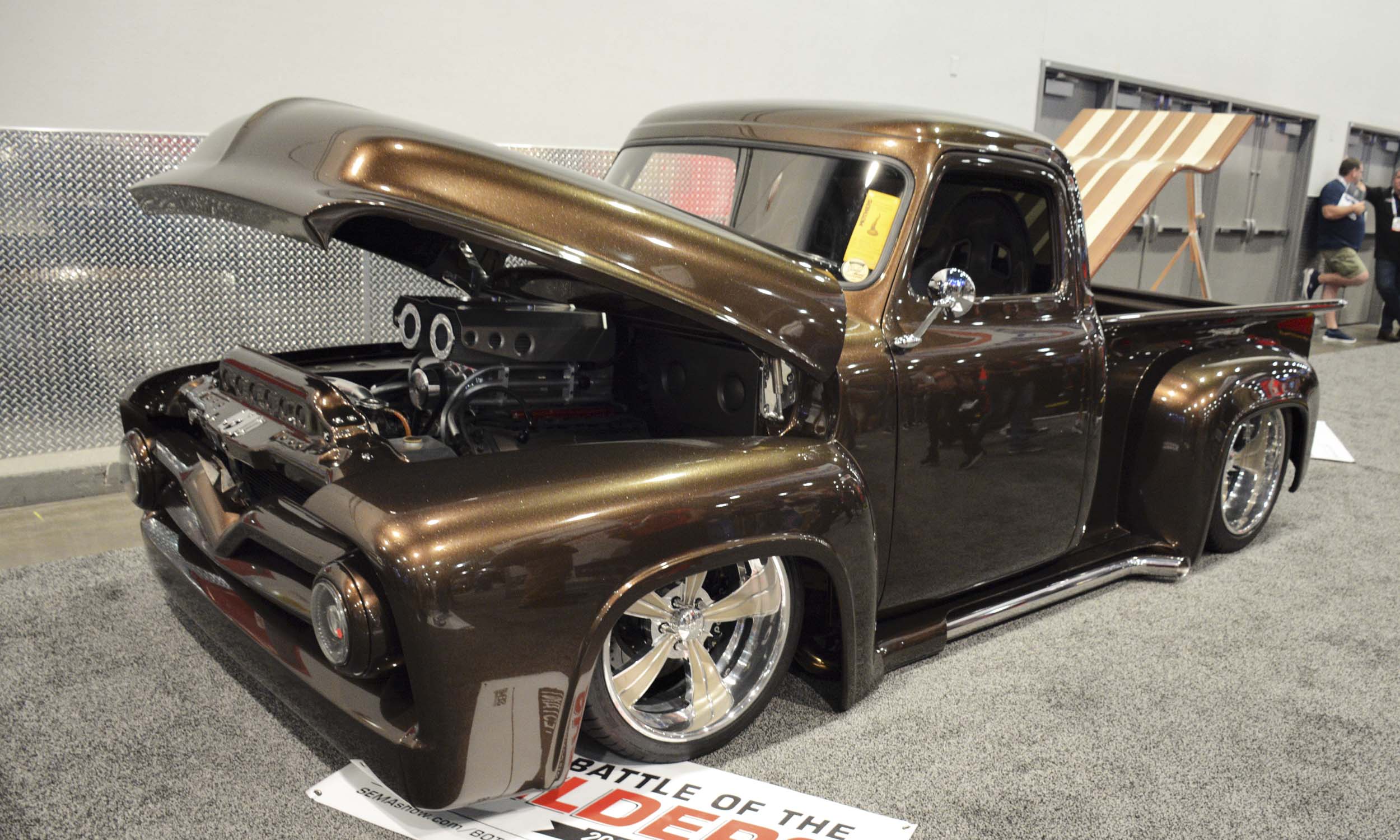 Coyote 1955 Ford F100
This fat-fendered Ford by Needfulthingz rod shop out of Lancaster, California, was a SEMA Battle of the Builders contestant. The ’55 F100, owned by Chris Beatty, has the stance, pristine paint and attention to detail one would expect from a show winner. We like the subtle but effective body mods and paint — root beer float, anyone? The Ford’s sheet metal manipulation includes a three-inch chop, custom front valance and rear roll pan, frenched taillights and our favorite, the exhaust treatment. Note how the pipes are integrated into the truck’s running boards. 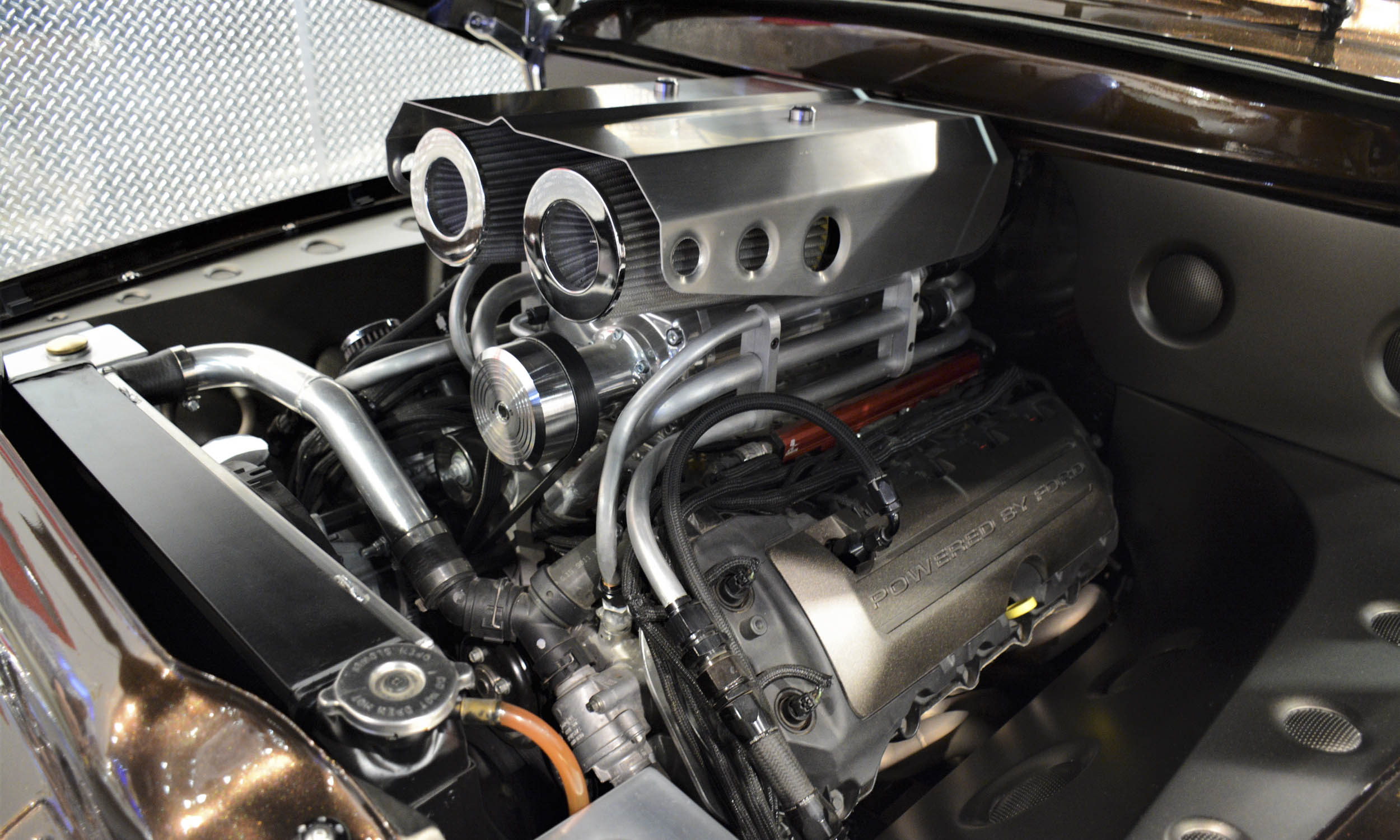 Coyote 1955 Ford F100
The truck gets its name from the Coyote engine. Ford introduced the high-tech V8 in the Mustang a few years ago and it has become a popular swap engine for Blue Oval fans. Beatty’s Coyote is pressurized by a Kenne Bell supercharger and tuned to 750 horsepower via an AEM Infinity standalone engine management system. 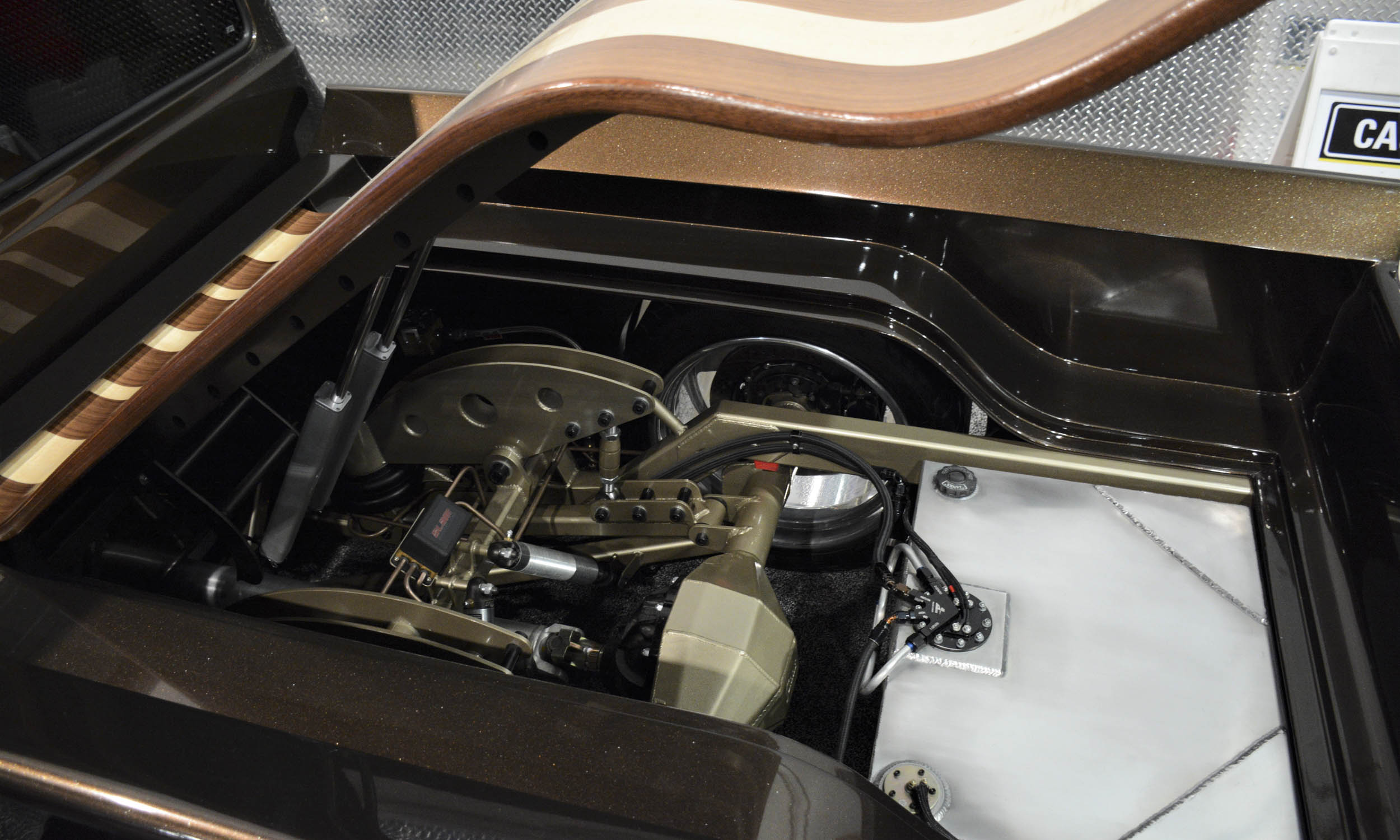 Coyote 1955 Ford F100
The bed of the Coyote features a truly unique wood floor that contours to the inner bed structure and is hinged like tonneau cover. It raises to reveal the rear suspension, which is a fully custom air shock setup. We like the adjustable links built to fine tune the suspension, and the flawless fit and finish of the driveline components. 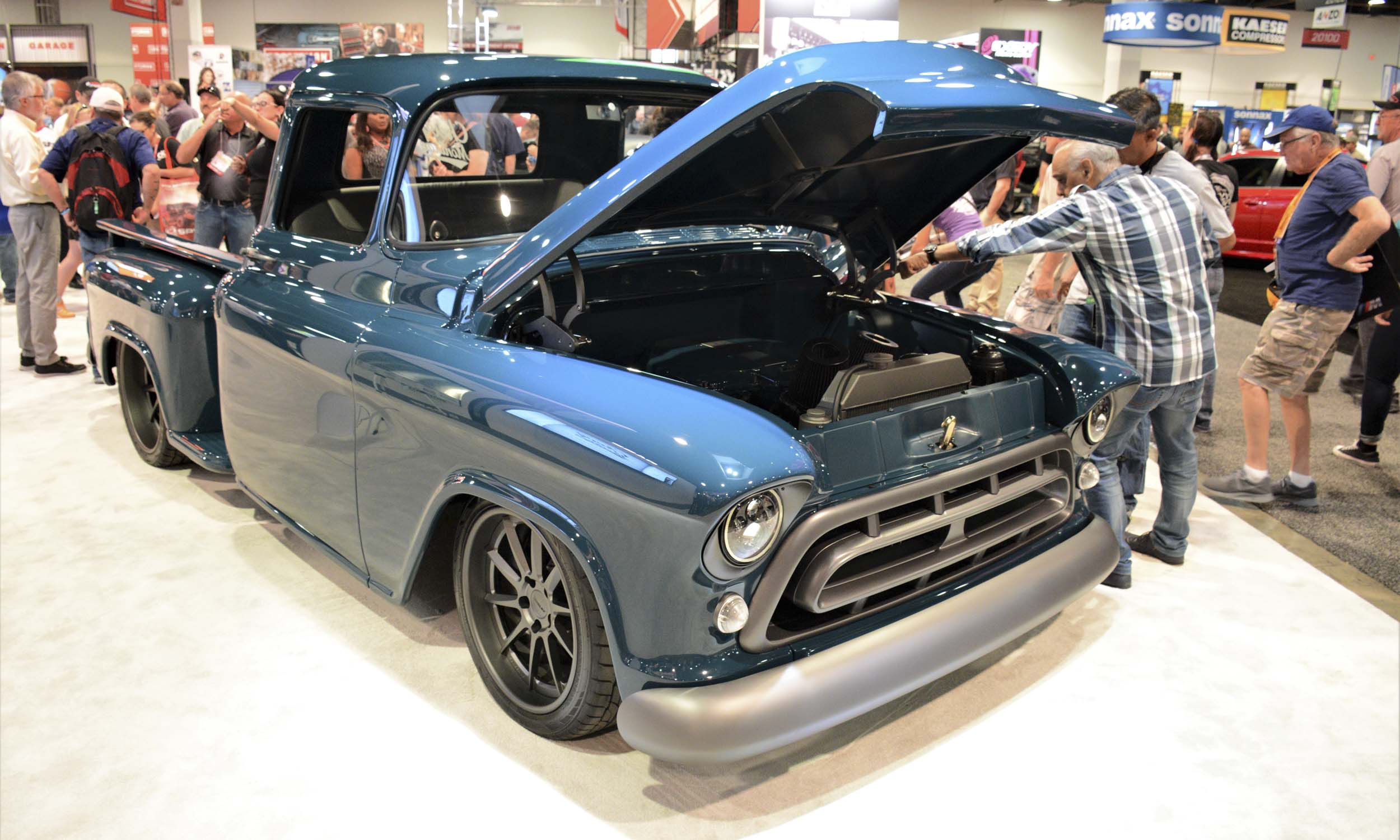 Chevy Montage
The project lead on this sweet ’57 Chevy pickup is Bogi, co-host of the Velocity network TV show, “All Girls Garage.” The team she led to build the Chevy Montage was entirely staffed by women, 30 percent of which were novices. This frame-off resto-mod is immaculate, featuring an Art Morrison chassis, Wilwood brakes and a BMW V8 engine borrowed from a high-performance M5. We applaud the color choice that reminds us of BMW Laguna Seca Blue; it’s actually a custom BASF paint dubbed Tenacious Teal, and its use was determined via votes cast by followers of the build. 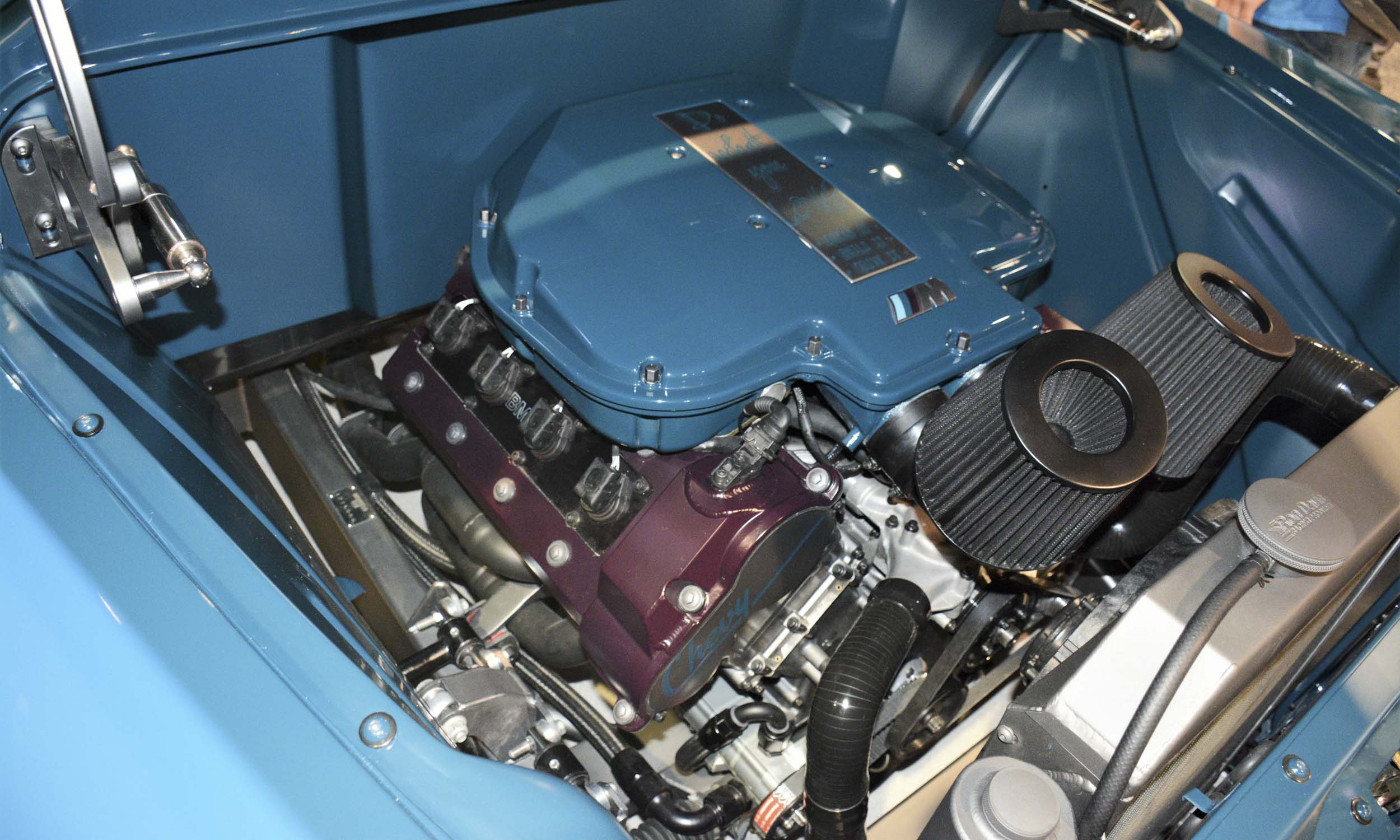 Chevy Montage
Making an impression at SEMA is all about curveballs, and there is a doozy under the hood of this old Chevy . . . a BMW V8. Not just any Bimmer V8, but an M-Power high-performance version. Scavenged from an E39 M5 produced between 1998 and 2003, the high-tech 4.9-liter BMW S62 V8 is rated at 394 horsepower. That’ll get ‘er done. 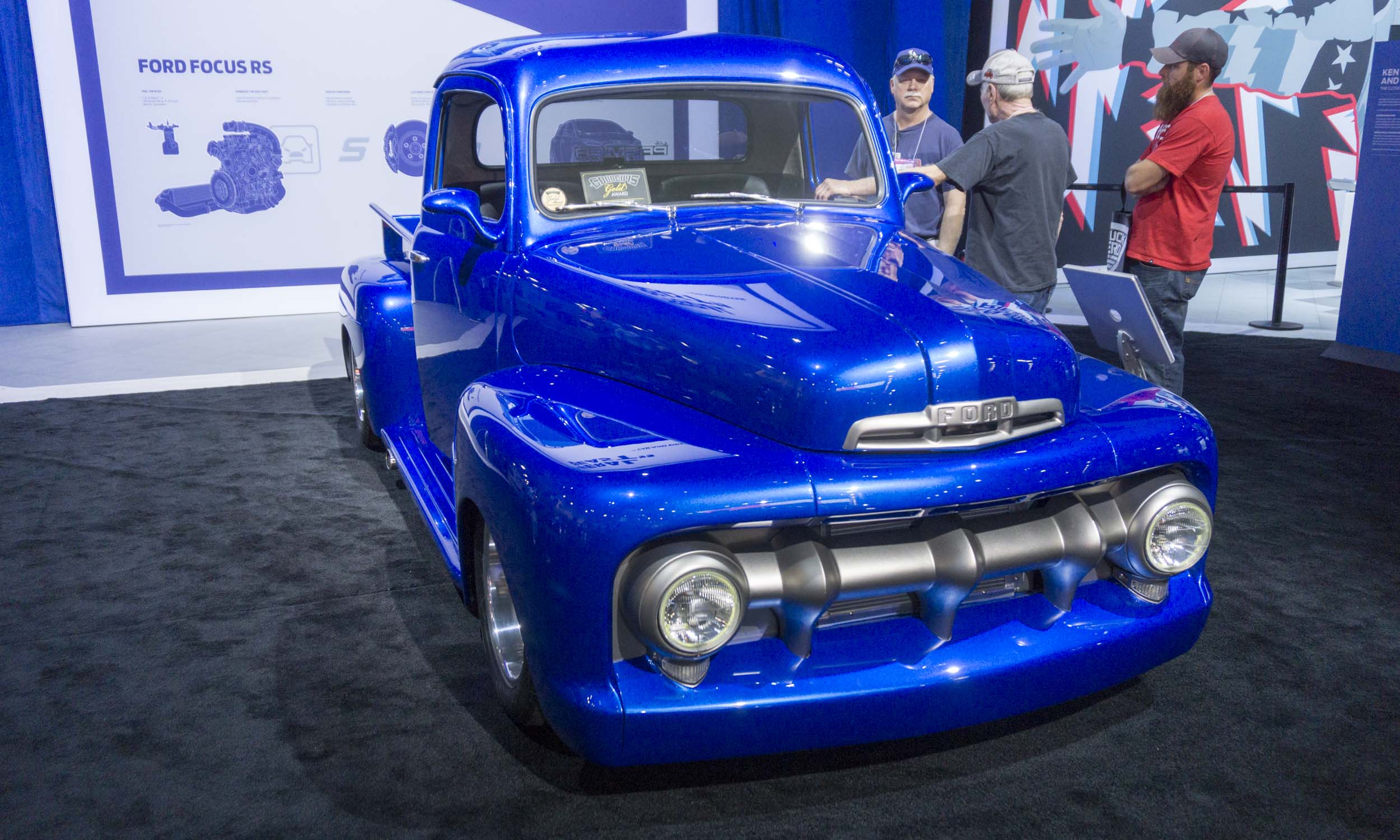 Premier Street Rods 1951 Ford F1
Showing a truck at SEMA is a big deal, but displaying it in the Ford booth means you’re really doing something right. Premier Street Rods of Lake Havasu City, Arizona, is doing something right. Its 1951 Ford F1 was parked next to Ken Block’s Gymkhana Mustang . . . talk about fast company. Premier built and painted the truck, and started the party with a Total Cost Involved chassis, added a 347-inch stroked Ford small block from the appropriately named Blueprint Engines, and bolted on a set of big pipes from Sanderson Headers. The pickup rides on 18-inch U.S. Mags U111 wheels and Toyo tires. 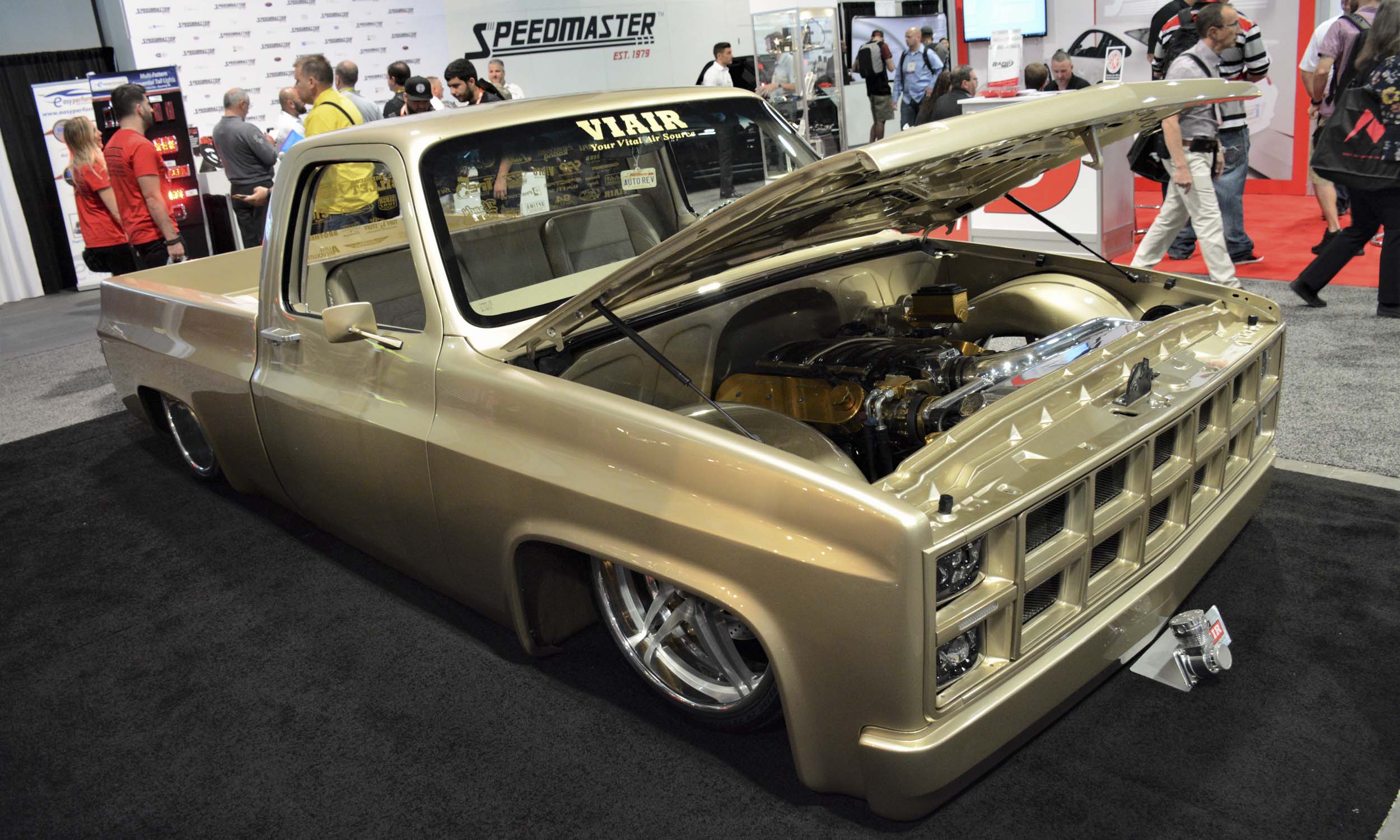 Gold Standard GMC
Rolled in gold and scraping frame, this truck makes a statement. We are not sure of its true year of manufacture, but the attention to detail in this truck is off the charts. The bodywork and panel gaps are perfect, and the GMC also has it going on under the hood and in the bed. 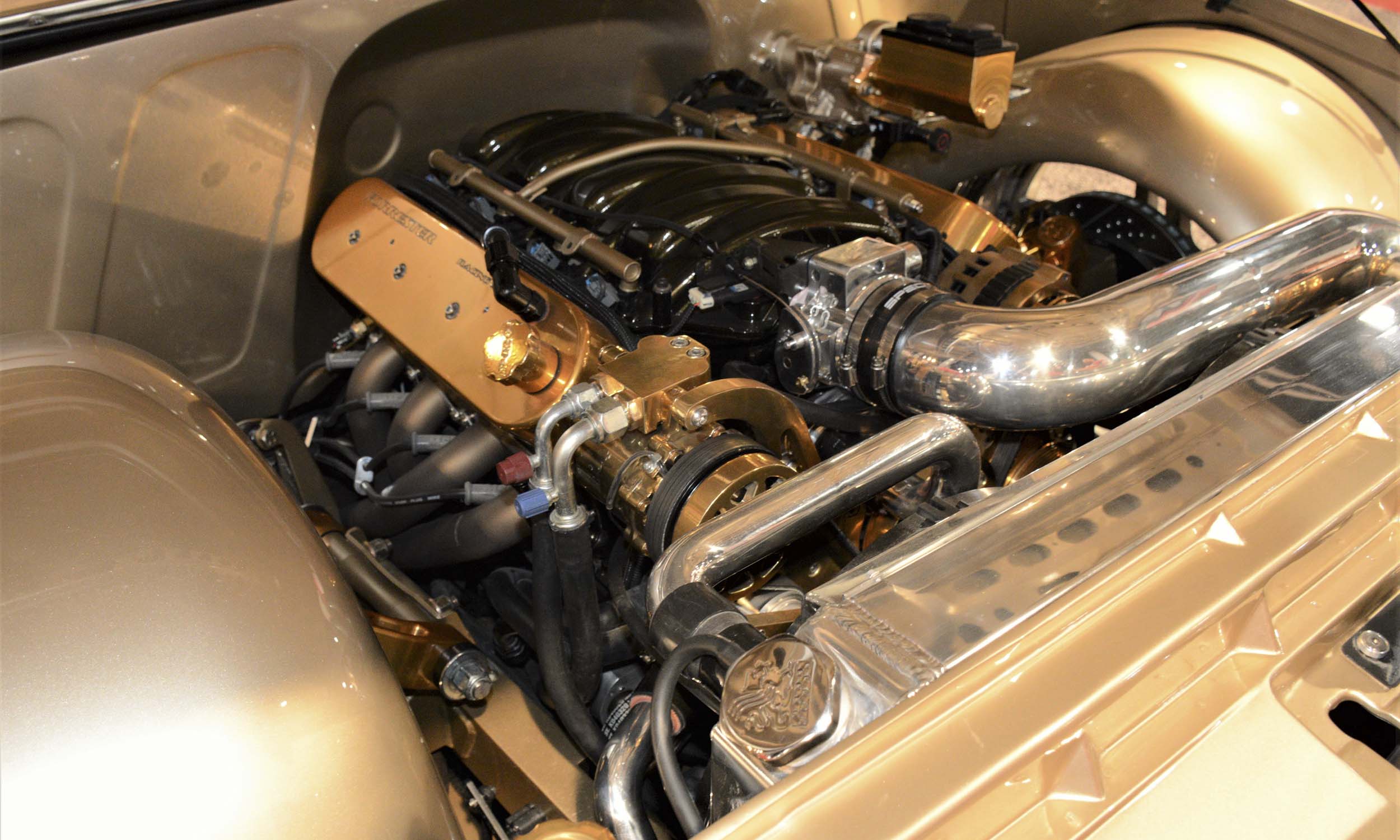 Gold Standard GMC
Under the hood, the Gold Standard GMC runs a modern LS small-block with a ton of gold anodized parts. The motor, built by Forrester Racing Engines, is serious business. Along with fortified internals it runs performance-adders such as headers, a custom intake system, upgraded cooling and more. 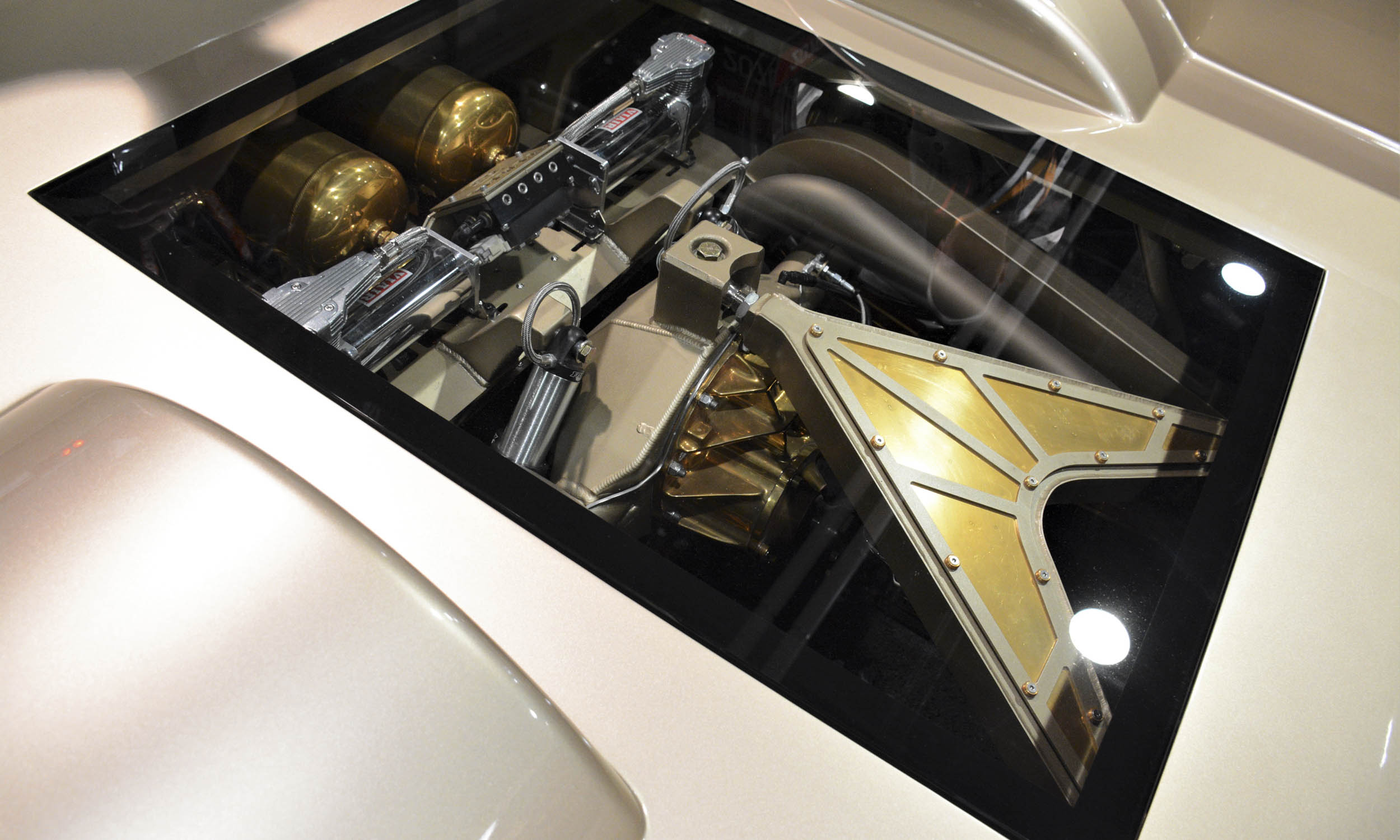 Gold Standard GMC
The Gold Standard’s rear suspension is a work of art, and the builders have treated it as such by framing it behind glass. You can see the rear end, air shocks and suspension links — all painted or powder coated in golden tones. Even the exhaust pipes are routed in a very artistic manner. 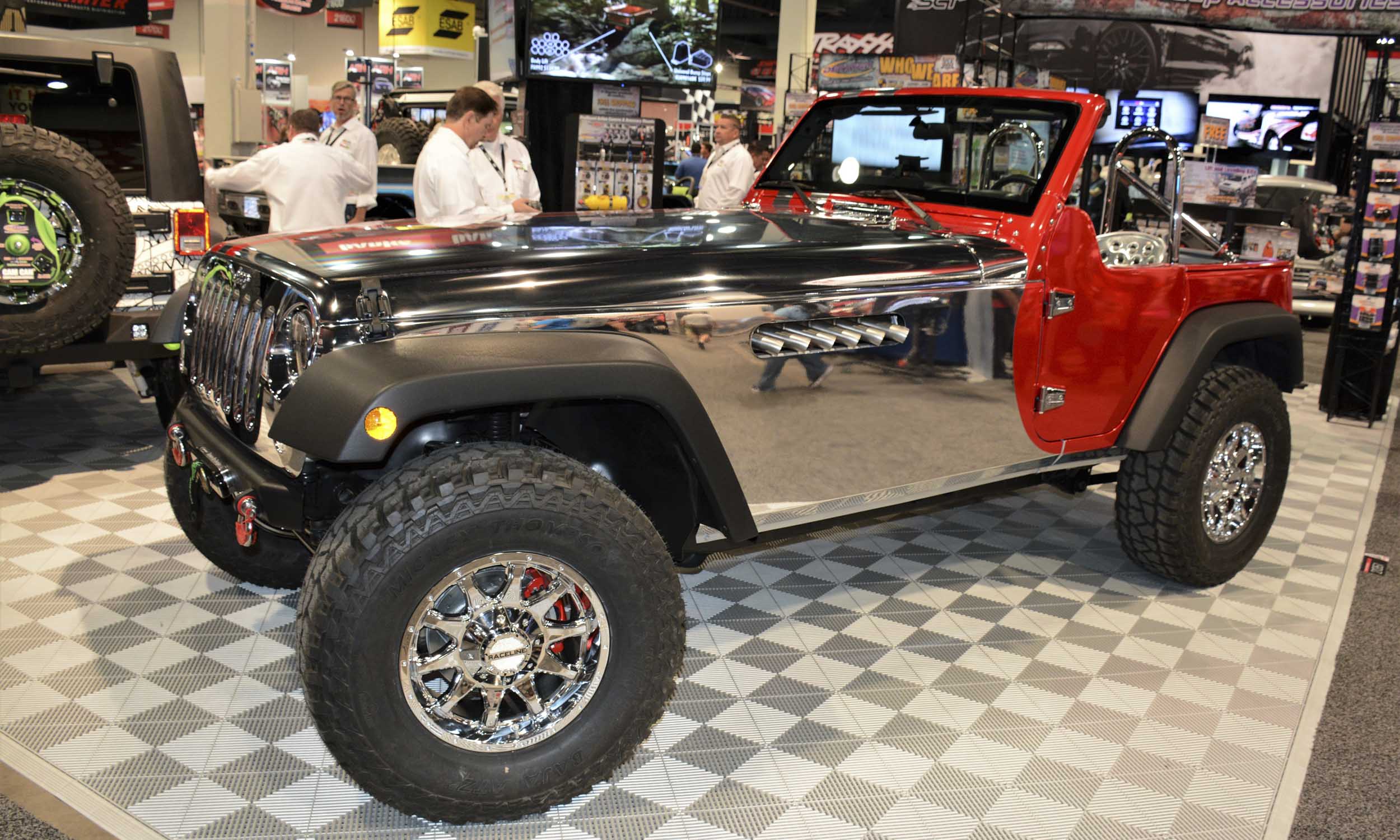 Daystar Jeep Off-Roadster
This amazing Jeep started as a 2017 JK Wrangler. To create the Off-Roadster, the hood and fenders were stretched a whopping 40 inches. Why, you may ask . . . to fit the engines, of course . . . yes, plural — engines. The frame is a modified stock JK with a Dana 30 front axle a Dana 40 in the rear. The Wrangler’s windshield is raked 14 degrees and the rig features a chrome wrap in front and a red wrap in the rear section. 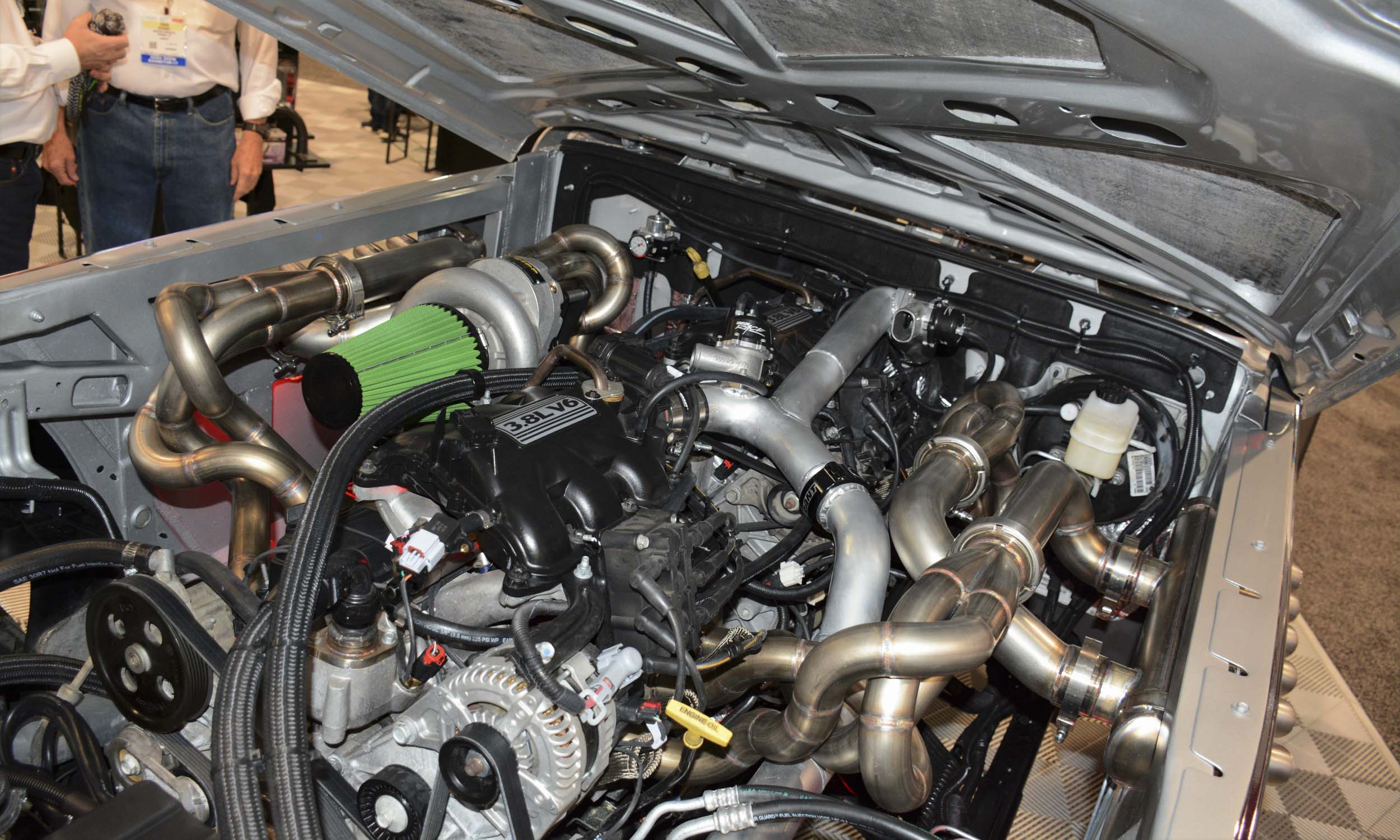 Daystar Jeep Off-Roadster
Power for the Jeep Off-Roadster is supplied by two 3.8-liter Pentastar V6 engines joined together in series and supercharged with a RIPP Supercharger blower kit and a customized RIPP intercooling system. The nature of the twin-engine design necessitated an elaborate exhaust system that snakes from side to side in the engine bay, terminating in six exposed tips on each side of the Jeep’s hood. 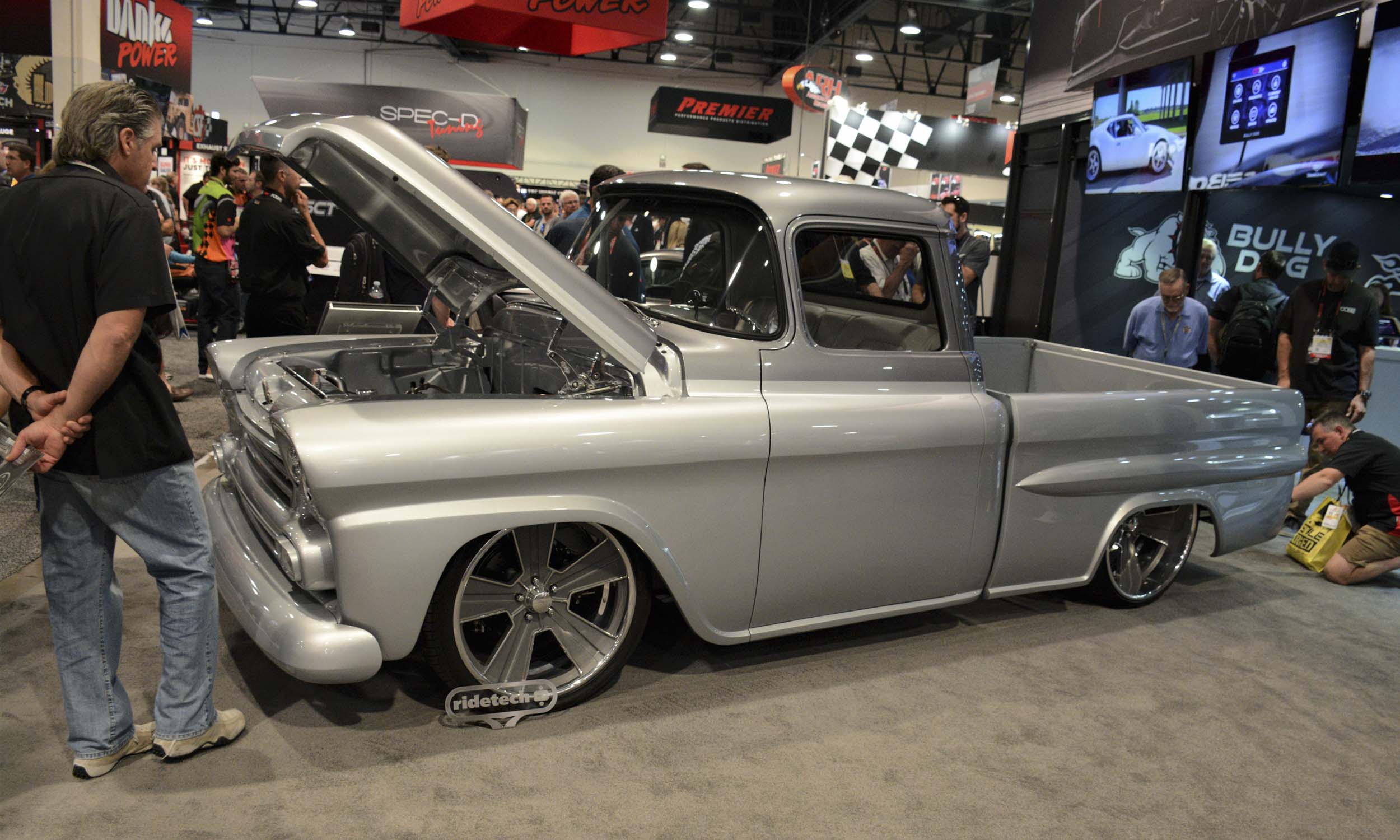 1958 Chevy Apache Dream Catcher
This Apache was built on the Velocity network’s “RMD Garage” TV show. The truck’s driveline consists of a 550-horse LS3 backed by a 6-speed manual transmission that feeds a TCI rear end. A TCI chassis is home to a RideTech coilover suspension, huge 14-inch Wilwood brakes, and a wild staggered wheel setup featuring Raceline wheels. The Apache is running 22X9.5s up front and meaty 24X12s at the rear. This one of those builds that rolls in a beater and rides out a beauty. 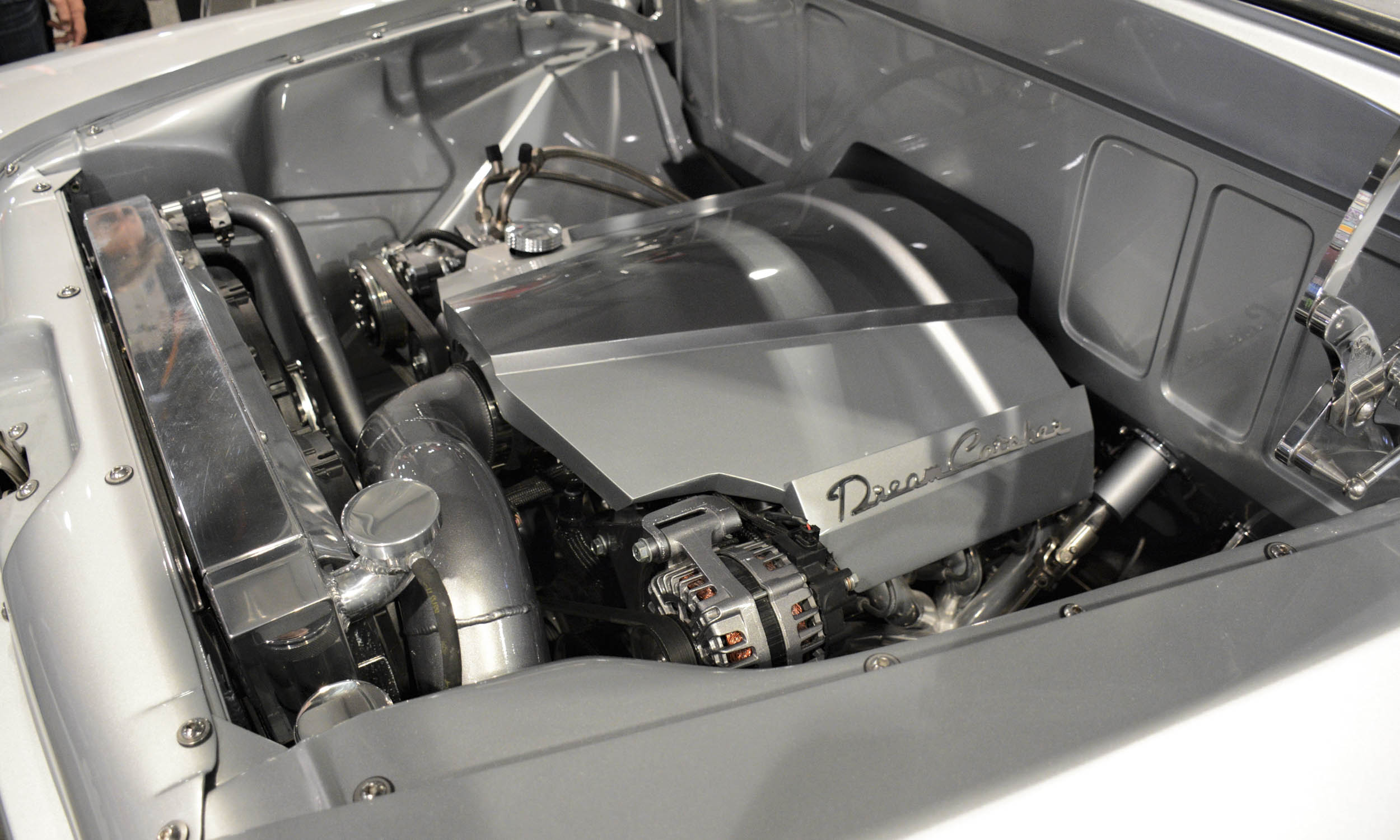 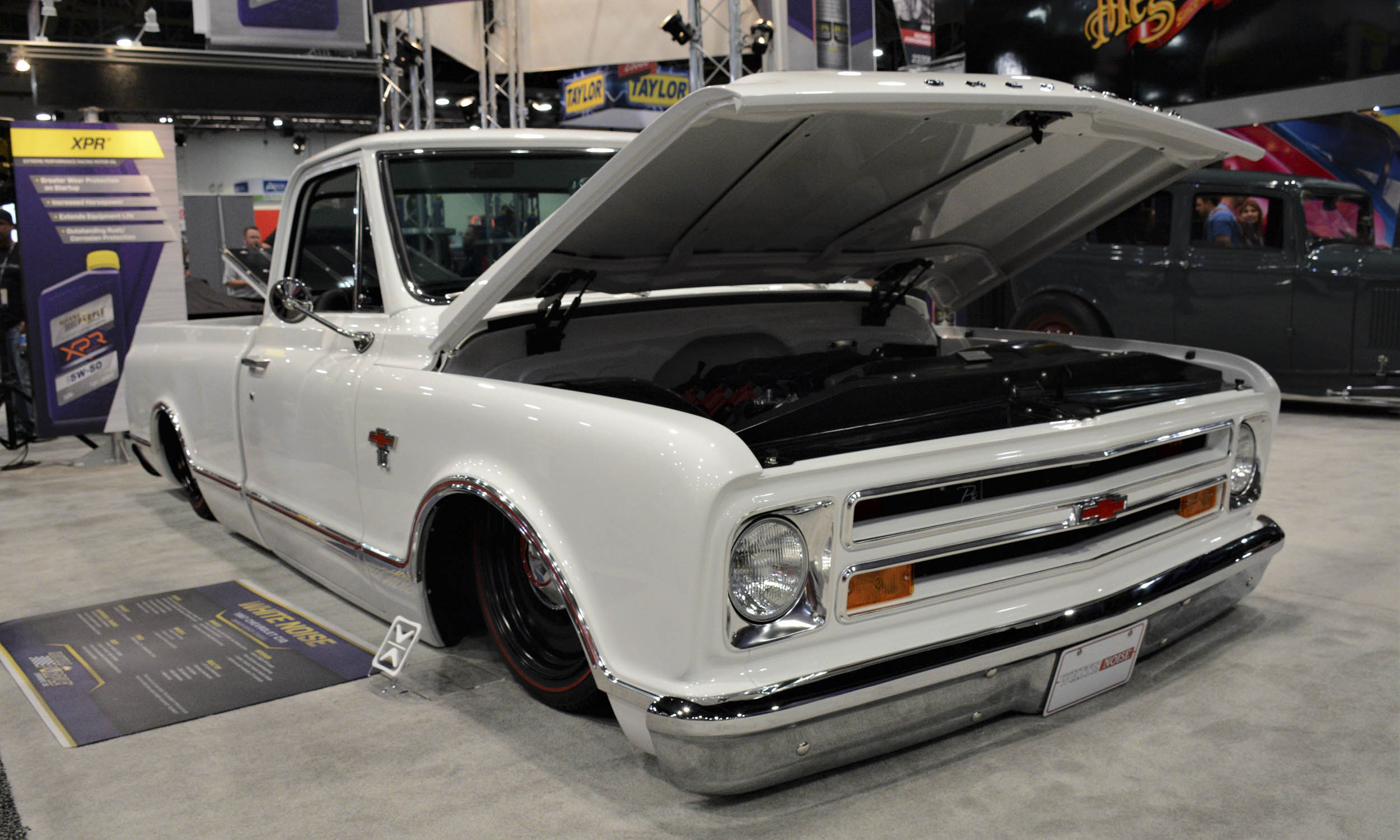 White Noise 1967 Chevy C10
This old Chevy has all the right moves: a hunkered stance from its custom Porterbuilt / Accuair airbag suspension, brute force from its 550-horsepower LS3 V8 engine, and a menacing look provided by its flawless white paint and 20-inch Detroit Steel wheels. Big wheels in the 18- to 20-inch range with a retro “steelie” look are one of the hottest trends in classic car resto-modding, and this rig pulls off the look in high style. 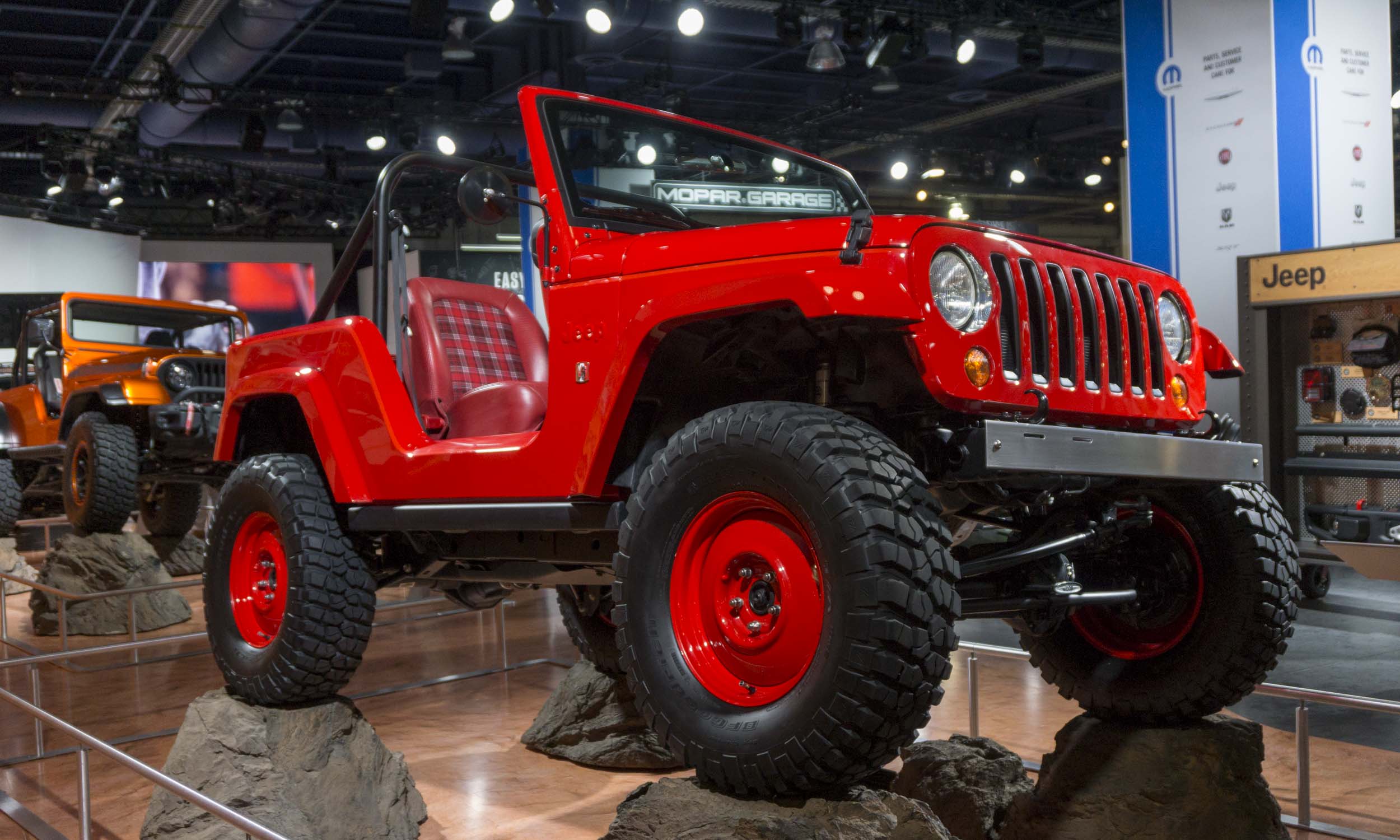 2018 Jeep Shortcut
We were taken by the retro cool vibe of the Shortcut, which pays tribute to the first civilian Jeep: the CJ5 of the early 1950s. This Jeep concept is more than a foot shorter than regular Wranglers, features revamped fenders and bumpers, and a unique grille. We like the tweed plaid interior, the 2-inch lift, and the beefy Dana 44 axles. It is doubtful that the Shortcut will see the light of day, but one can dream. 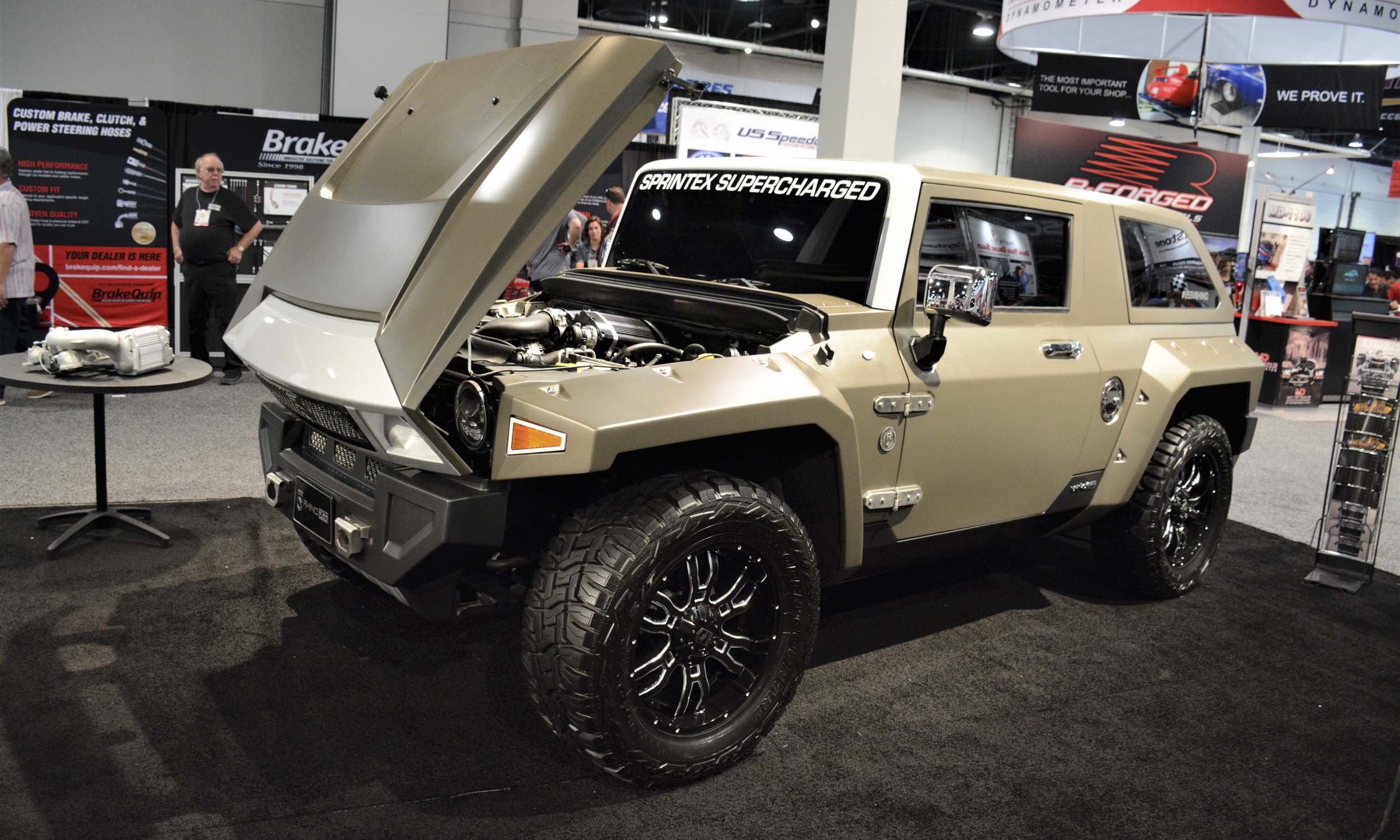 Rhino XT Jeep Wrangler
The Rhino XT comes from the active minds of US Specialty Vehicles. Everything that has an angle to it has been accentuated . . . as if a Lamborghini Countach wand was waved over the Wrangler’s sheet metal. The Jeep’s front fenders are designed to be quickly removed for added suspension travel and enhanced off-roading ability. This particular Rhino has a Sprintex supercharger fitted to its 285-horse 3.8-liter Pentastar V6 engine. 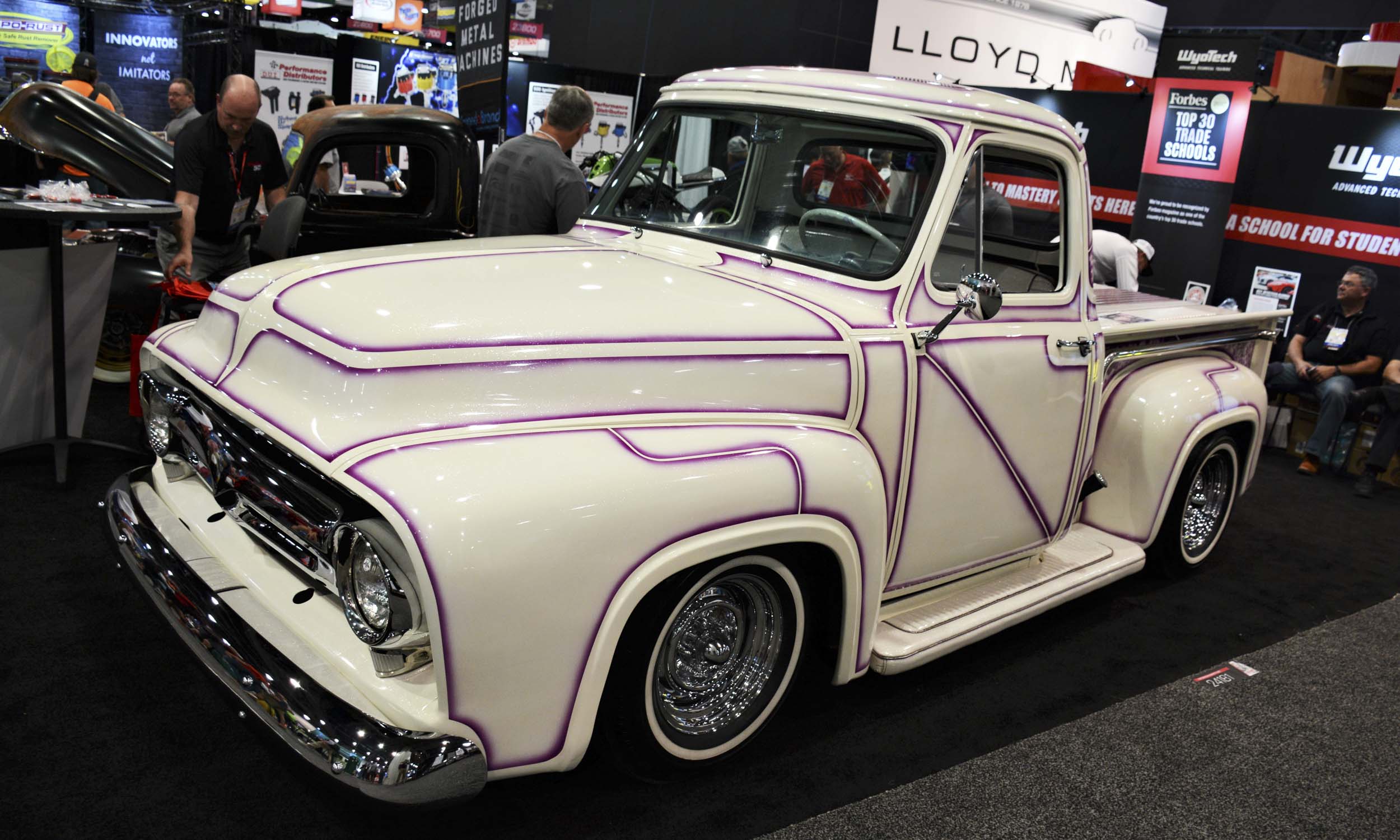 Stenciled F100
With its white with purple stenciled Patrick Hampton paint scheme, this 1953 F100 really knows how to grab attention. The old Ford is powered by a 350-inch small-block Chevy V8 engine backed by a TH350 automatic transmission and a Dana 44 rear end. The truck is owned by Mickey Brown, proprietor of Mickey’s Kustom Upholstery, who executed the custom interior. Mickey is also a graduate of the WyoTech automotive training program, and thus his ride was on display in the WyoTech booth.