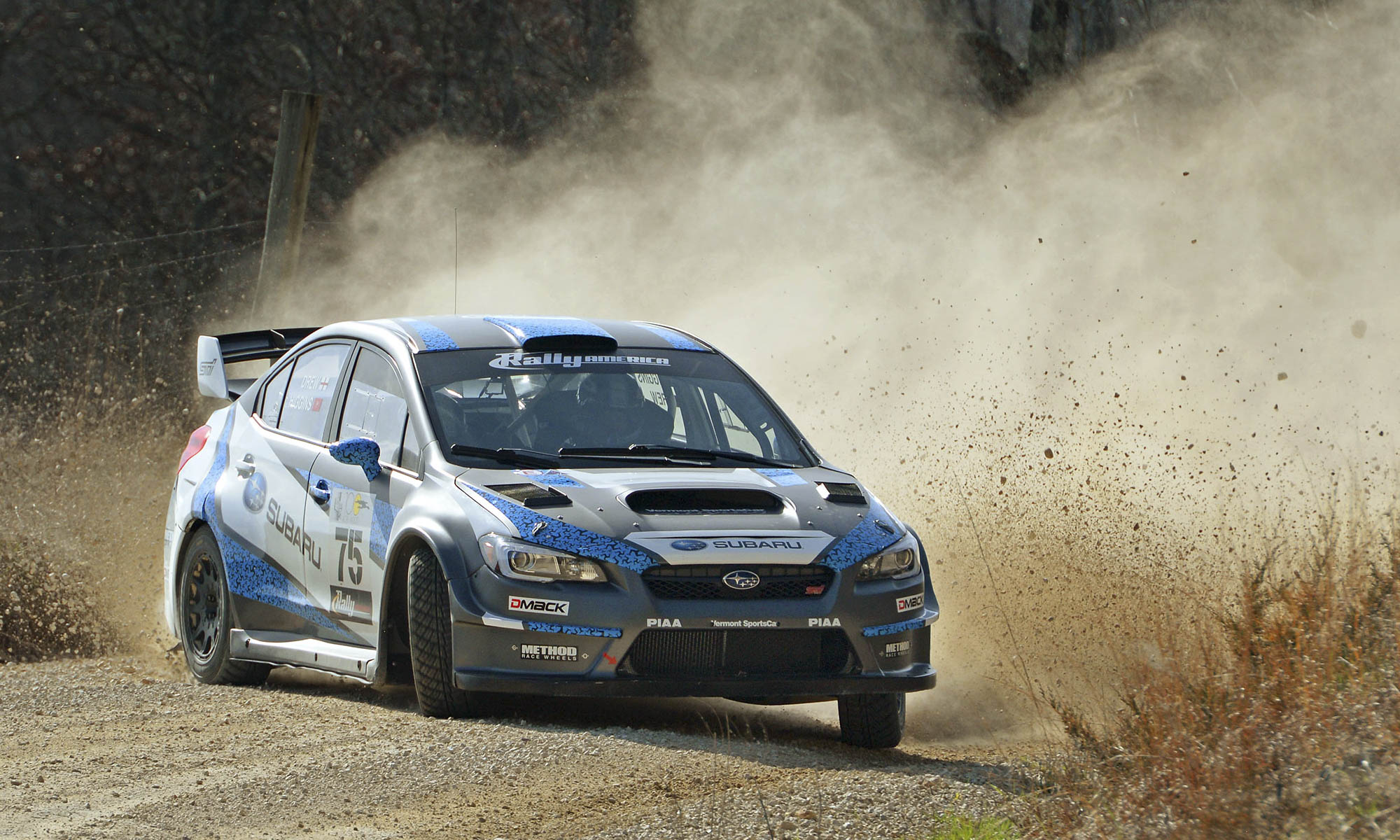 Rally Racing, American Style
Across America many different types of auto racing take place throughout the year — NASCAR, IndyCar, drag racing, F1, World of Outlaws, spec racing . . . the list could go on and on. But one the most difficult, exciting and unsung forms of motorsport in the U.S. is rally racing. 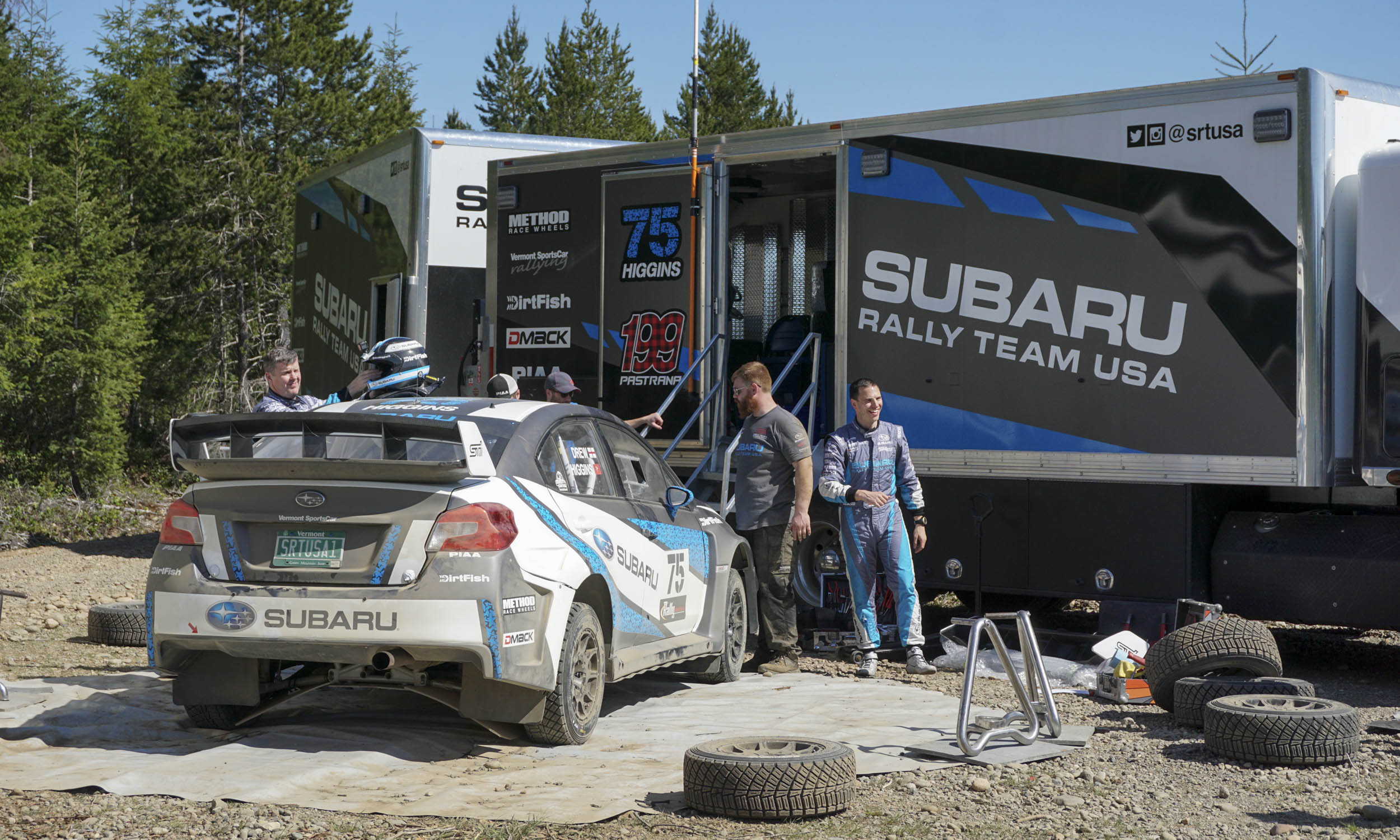 Rally Basics
Considered by pundits and enthusiasts to be one of the most demanding and dangerous types of auto racing, rallying tests a driver’s skill on closed public and private roads of varying terrain under every imaginable weather condition. Drivers and navigators race from point to point; the fastest driver wins the stage, but the team with the lowest cumulative time over multiple days of a single rally wins the crown. We had a chance to hang out with the Subaru Rally Team USA as they prepared to run the Oregon Trail Rally on April 22–24, 2016 — the third event of the 2016 Rally America National Championship season. 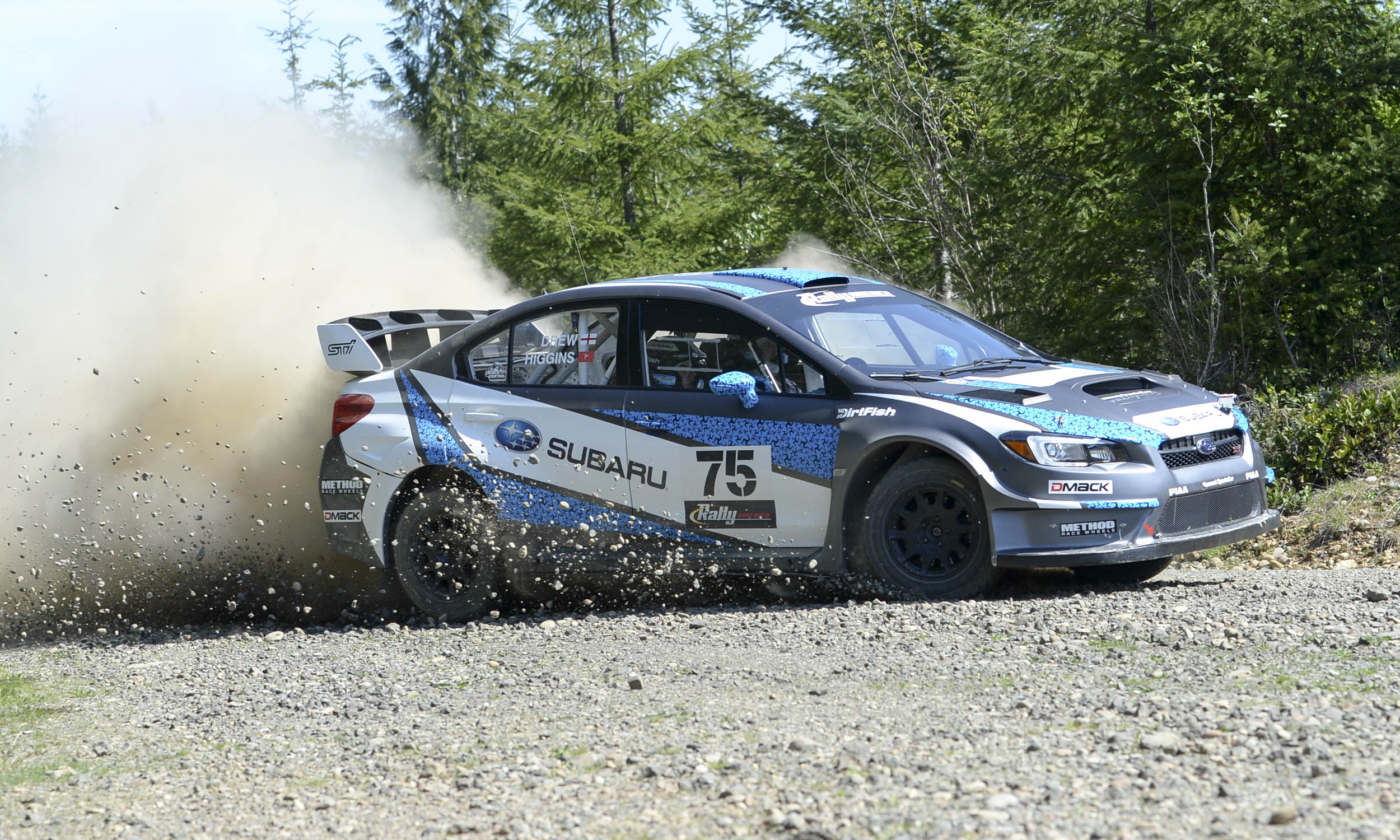 Car #75
Subaru runs two WRX STI cars in the Open Class of the highly competitive Rally America racing series. Car #75 is driven by David Higgins with co-driver Craig Drew. Higgins started racing for Subaru Rally Team USA in 2011 and has won the championship every year since. In fact, Higgins won all eight of the 2015 Rally America National Championship rounds, becoming the first driver to have a perfect undefeated season in U.S. rallying since 1987. 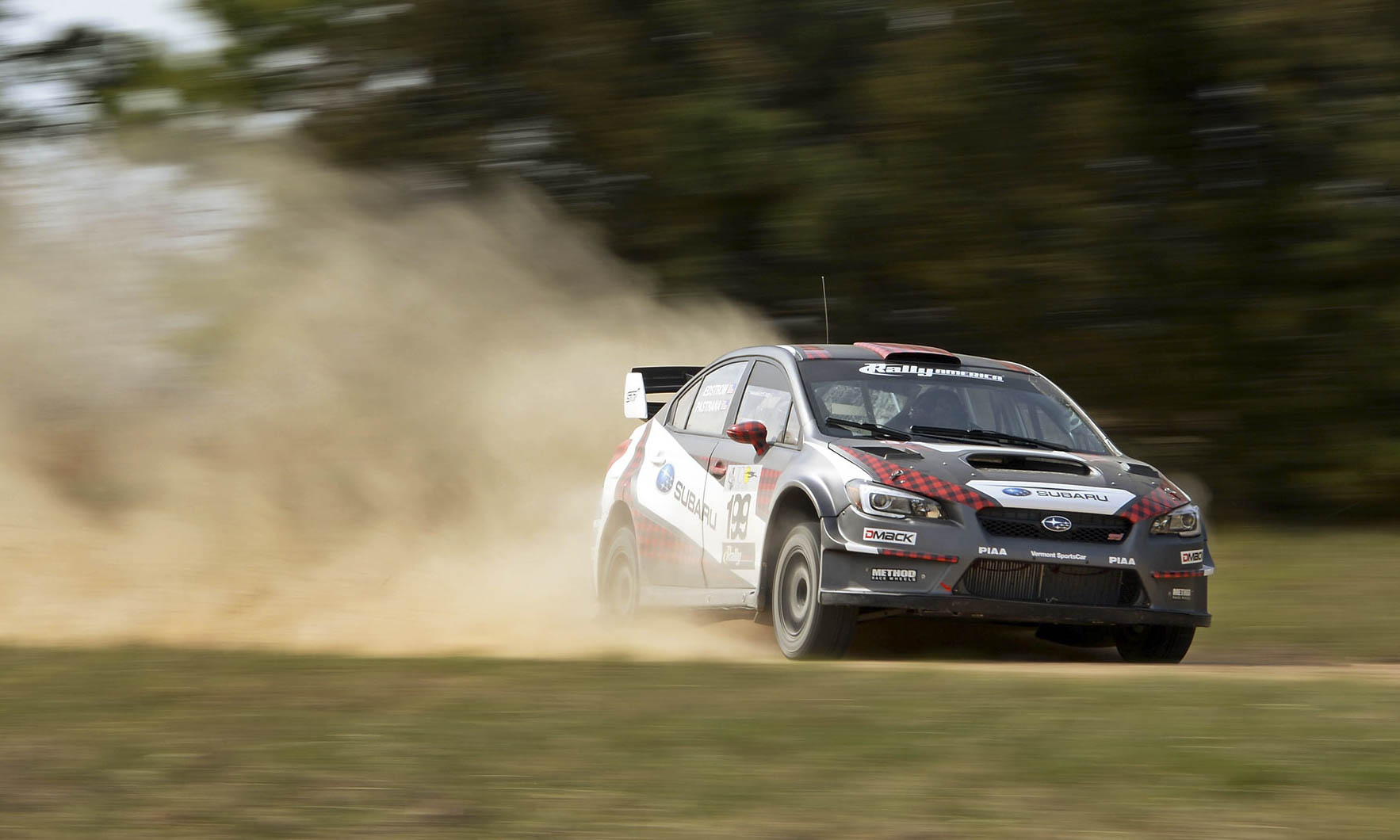 Car #199
A celebrity in his own right for mastering myriad forms of motorsport, Travis Pastrana drives car #199 with co-driver Christian Edstrom. Pastrana won rally championships in the U.S. from 2006–2009 driving for the Subaru team. He rejoined the team in 2014. Although well-known for his rally driving, Pastrana is a motorcycling legend, earning nine gold medals in the X Games for Freestyle Motocross. Famous for performing backflips during freestyle motocross competitions, Pastrana gained even more notoriety on New Year’s Eve in 2009 when he jumped a Subaru rally car a world record 269 feet from Long Beach, California’s Pine Street Pier onto a barge anchored in the harbor. 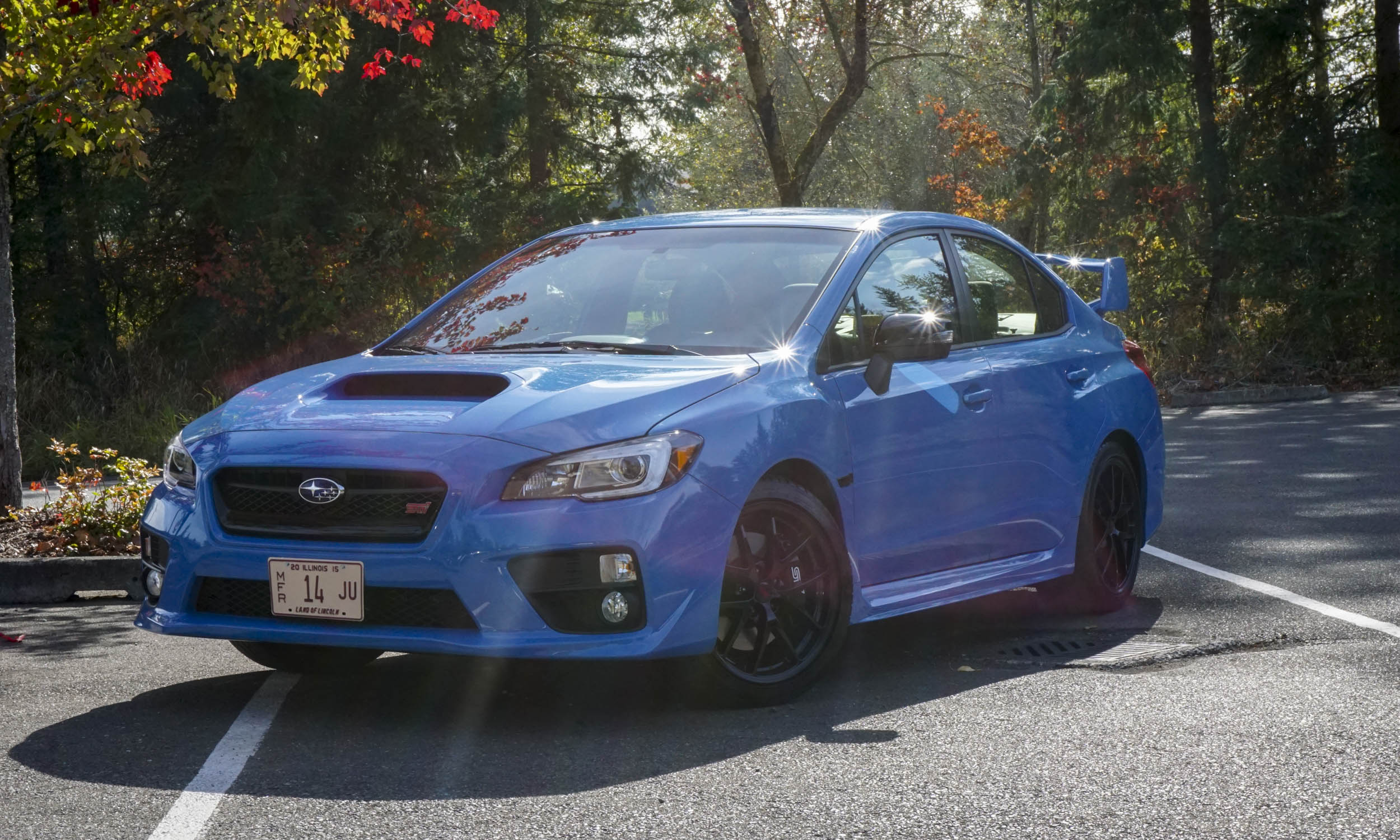 Building a Race Car
Both Higgins and Pastrana drive these special 2016 WRX STI Open Class rally cars. Starting with a stock 2016 Subaru WRX STI production car, Subaru’s partner Vermont SportsCar modifies the car for competition. The interior is stripped to the metal, then the body shell is lightened and fully seam-welded for added strength. A multipoint roll cage, manufactured from T45 steel, gets welded into place for added stiffness and security. 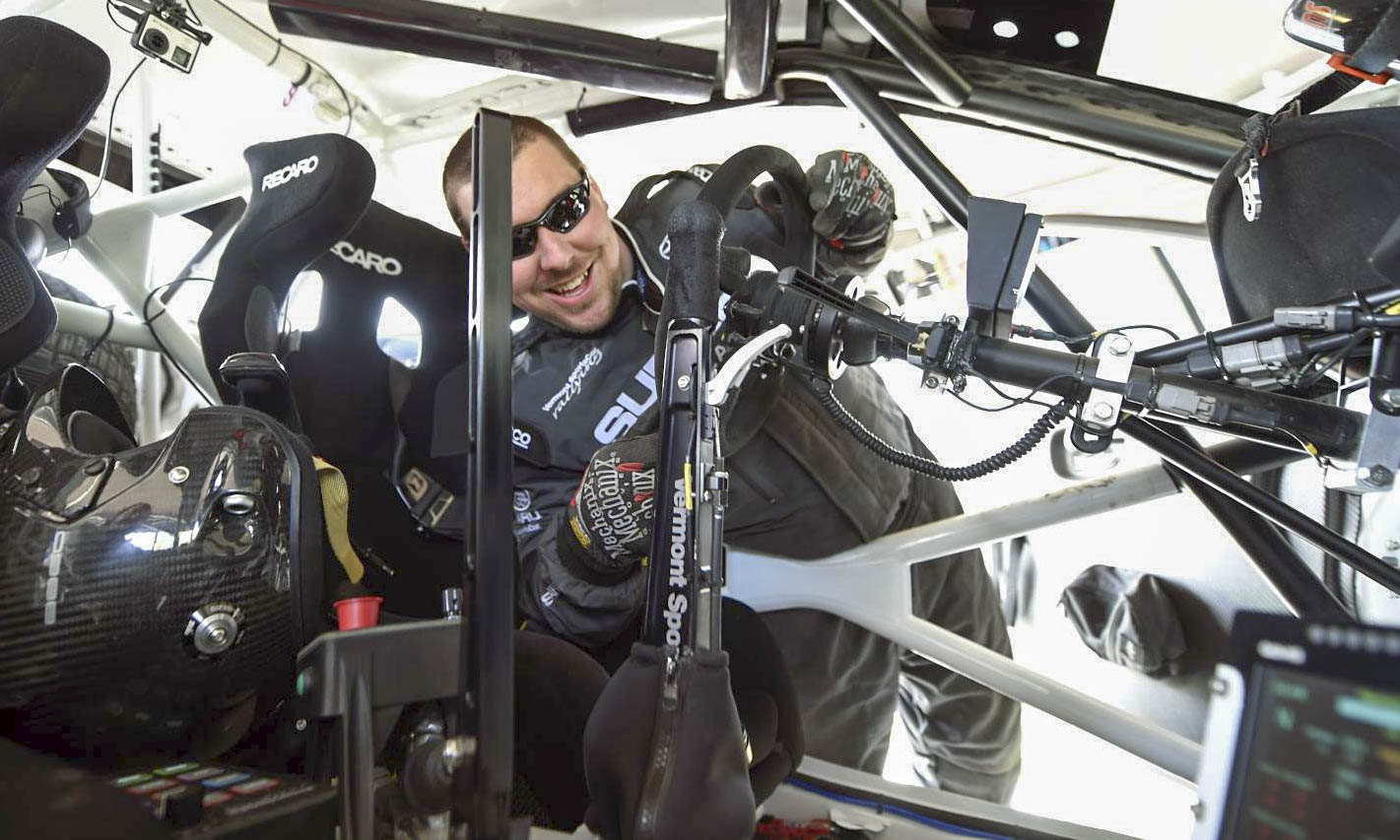 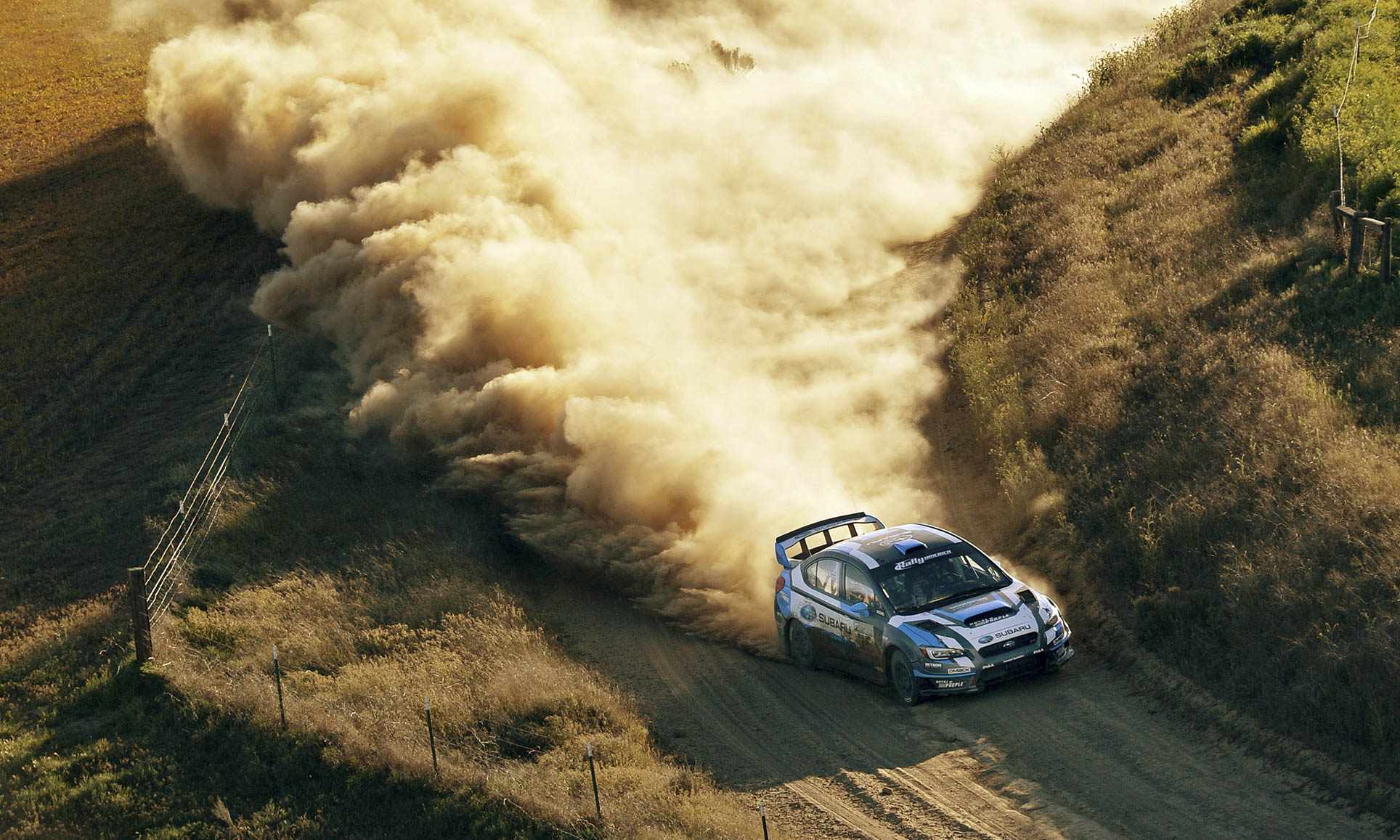 Big Power
Power in the Subarus comes from a 2.0-liter turbocharged and intercooled STI engine with a Rally America Championship-mandated 34 mm turbo inlet restrictor. Output is around 330 horsepower and 480 lb-ft of torque. Launch control, a turbo anti-lag system and a hydraulic handbrake are just a few of the other performance modifications. 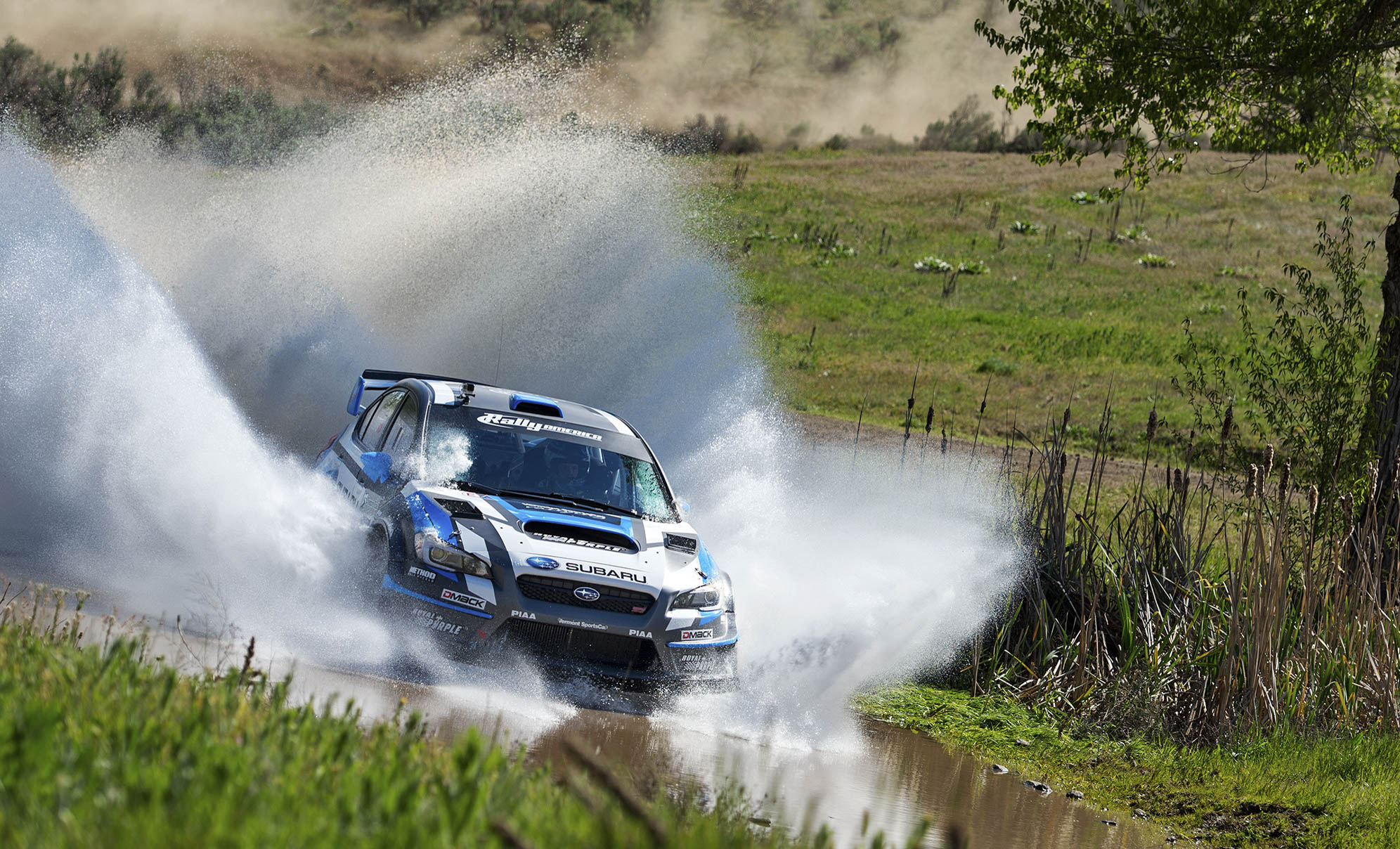 Quick Shifting
The Subaru WRX STI employs a 6-speed, close-ratio gearbox, which allows the driver to shift without pressing in the clutch pedal. The DCCD (Driver Controlled Center Differential) is similar to a stock STI street car, although it has a competition ECU for the differential, which allows for greater control over the torque delivery between all four wheels. 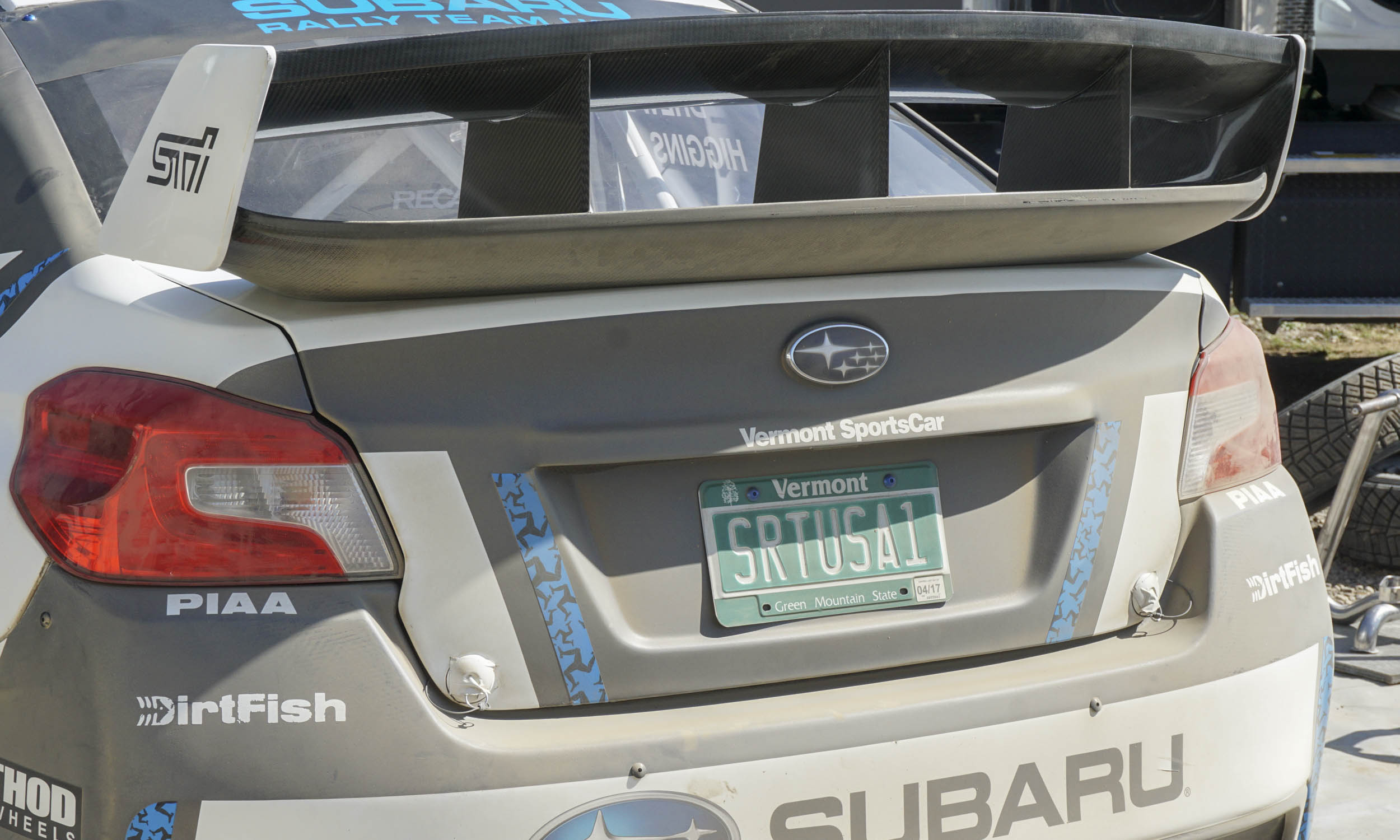 Exterior Look
The exterior of the car is almost stock. The only visible additions are mud flaps, a roof-mounted air scoop that helps cool both the driver and navigator, and a larger vertically slotted rear wing that greatly improves downforce on the rear of the car, even as it slides sideways. Underneath is a quarter-inch aluminum skidplate. 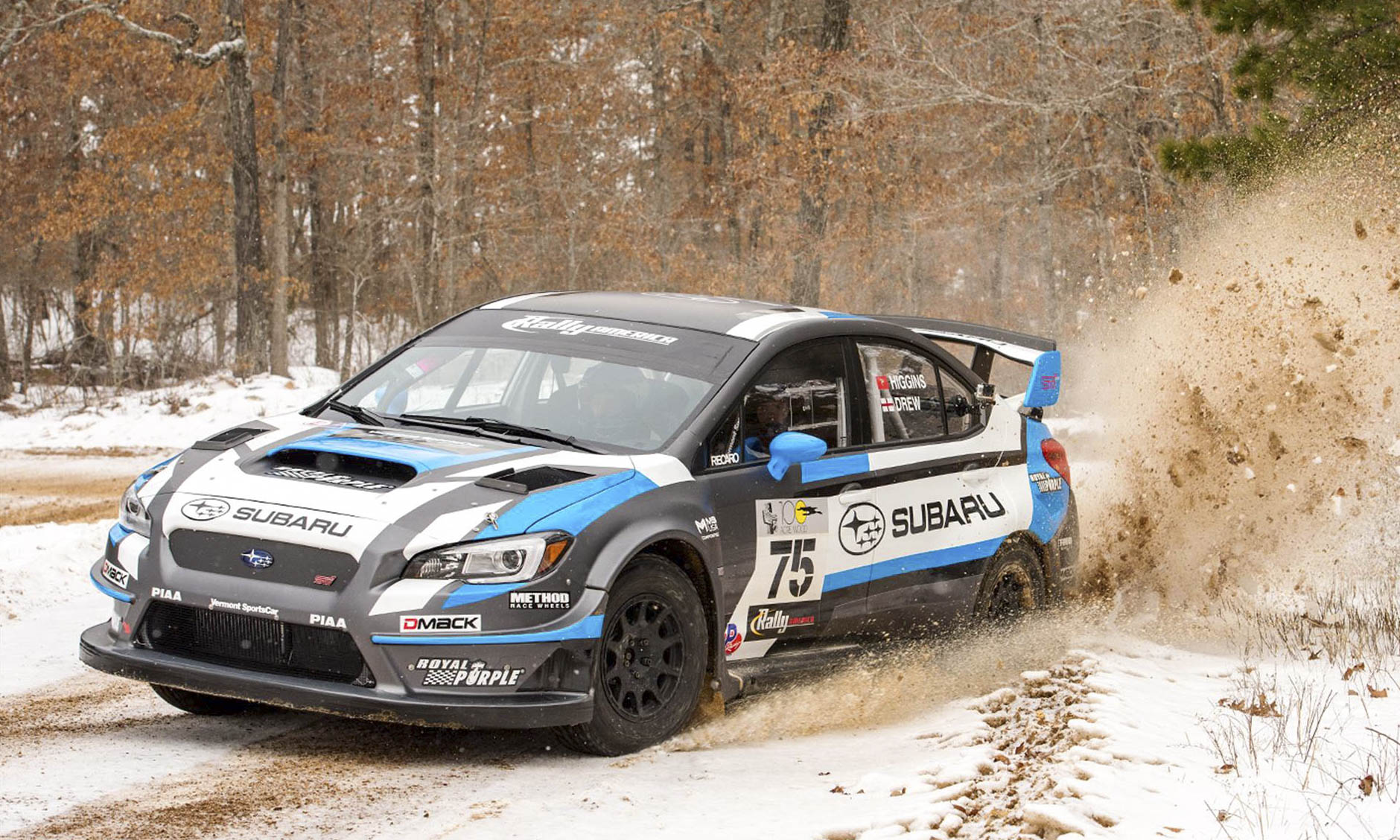 Extreme Conditions
So why does this type of racing require such extraordinary skill? Race conditions can vary from one extreme to the other — even during the span of one race. Rally courses can include loose gravel, mud, snow, tarmac, or a combination of any of these during a single race. In terms of weather, teams may experience blinding sun, driving rain, hail or dense fog; some rally stages are even run at night. 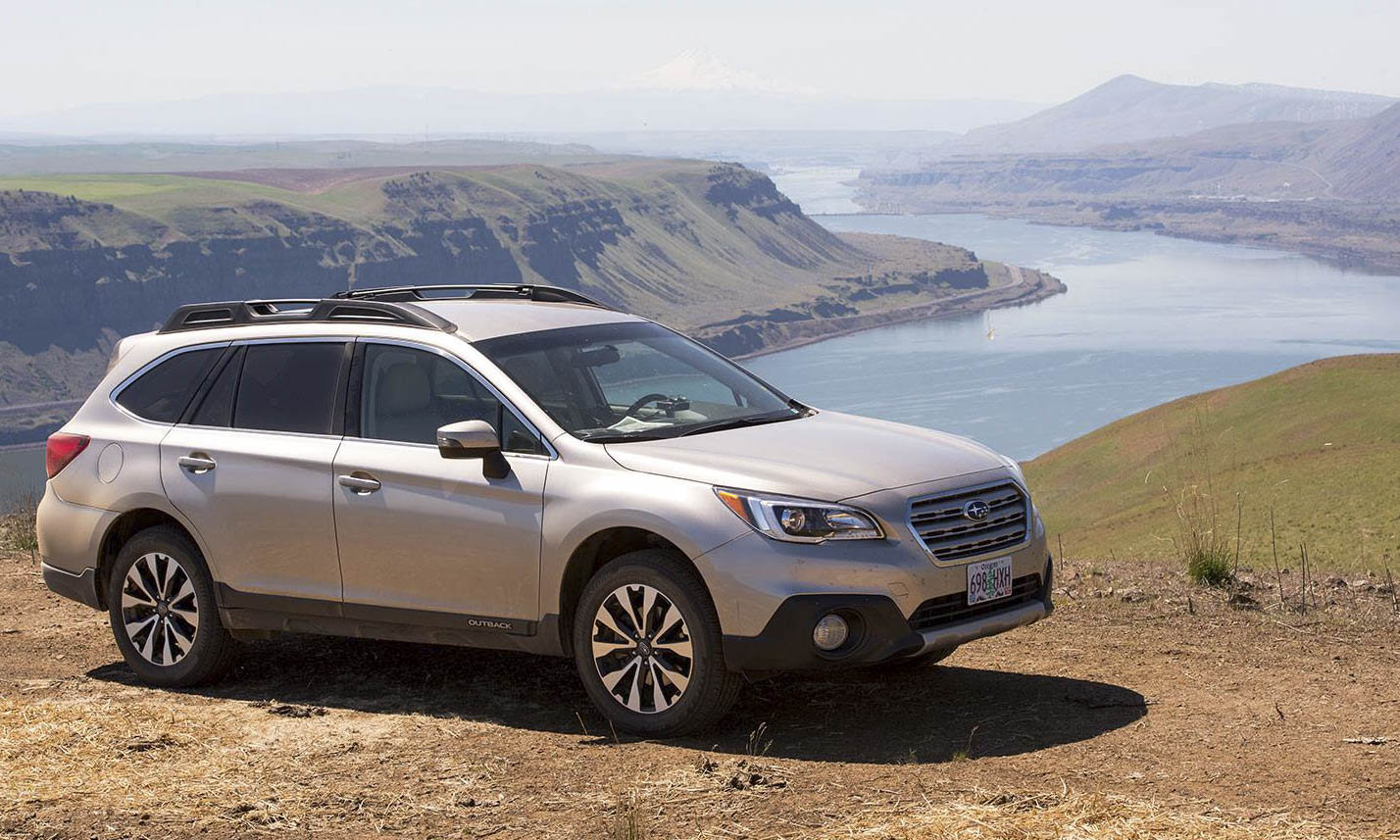 Course Reconnaissance
In rally racing, the driver only gets to run the course a couple times before the actual race. We spoke with Craig Drew — David Higgins’ co-driver/navigator — who explained how it works. “A couple of days before the event starts we have recce, which is reconnaissance, where we drive a standard street car on every stage twice. [On the] first pass of the stage David will make notes and basically narrate the road to me, and on the second pass I read those notes back to him.” Teams usually shoot video of the stage and go over it afterwards. The next time they set eyes on the course will be during the race itself. 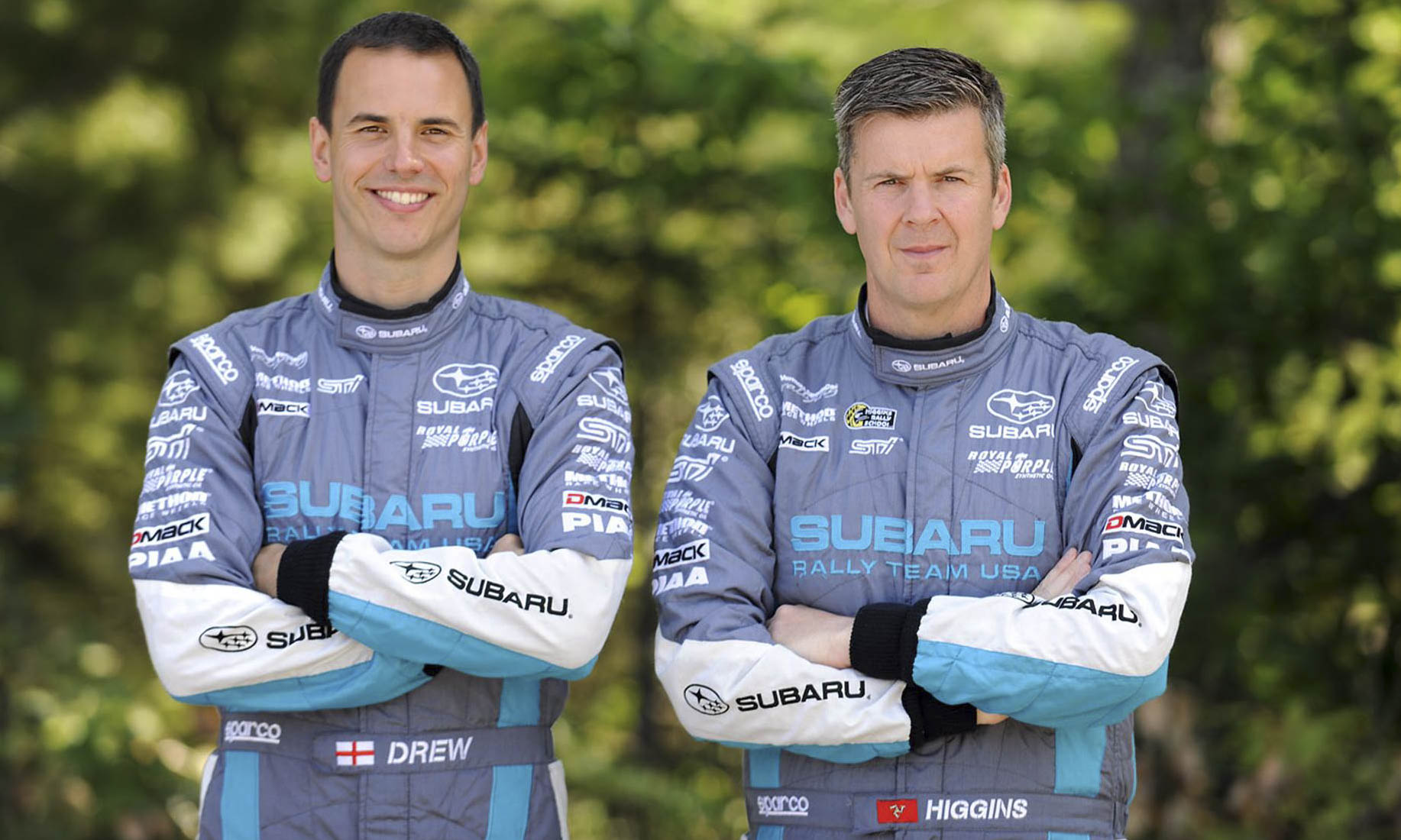 Driver and Co-Driver Communication
When taking to the course at full speed, the co-driver reads the notes back to the driver with an appropriate lead interval so they can make it through blind corners and tight situations without hesitation. If you’ve ever listened to this exchange, it can be difficult to understand, but Drew (above, left) explained the code. “We have a system where a number 6 is fast, like a 6th gear flat-out corner, all the way down to a 2.” These are read out as a “right-6, right-5, right-5” on down to two, which indicates the direction of the upcoming turn and the speed. “We also have plusses and minuses – a right-4 plus would be slightly faster than a right-4”. Distances between corners are read aloud in meters. Other notes include crests, jumps, rough sections and slippery sections.

Navigating by Feel
“A more advanced aspect of co-driving is actually being able to co-drive through feel. Sometimes in very busy sections you don’t really have a chance to look up. You have to be able to feel through your butt really where you are,” added Drew. “Sometimes it’s probably better that you can’t see where you’re going,” he said laughing. 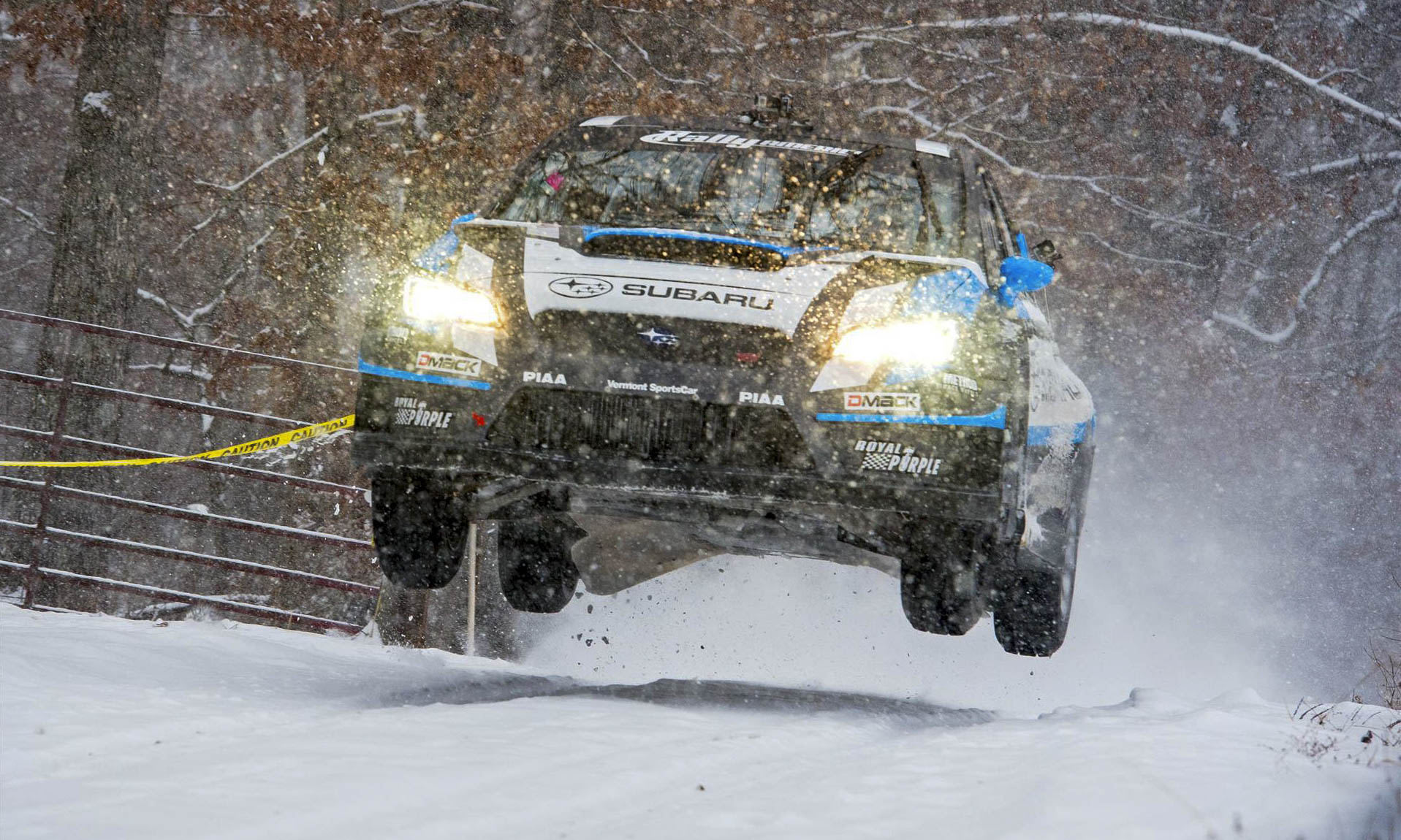 Driving Blind?
There are times when seeing the road isn’t even an option. Drew told us: “There’s a famous saying in rally that even if its foggy or dusty, the road hasn’t moved. So you still have to trust your notes, because even though you can’t necessarily see as much as you’d like to, the corners are still what you saw on the recce.” 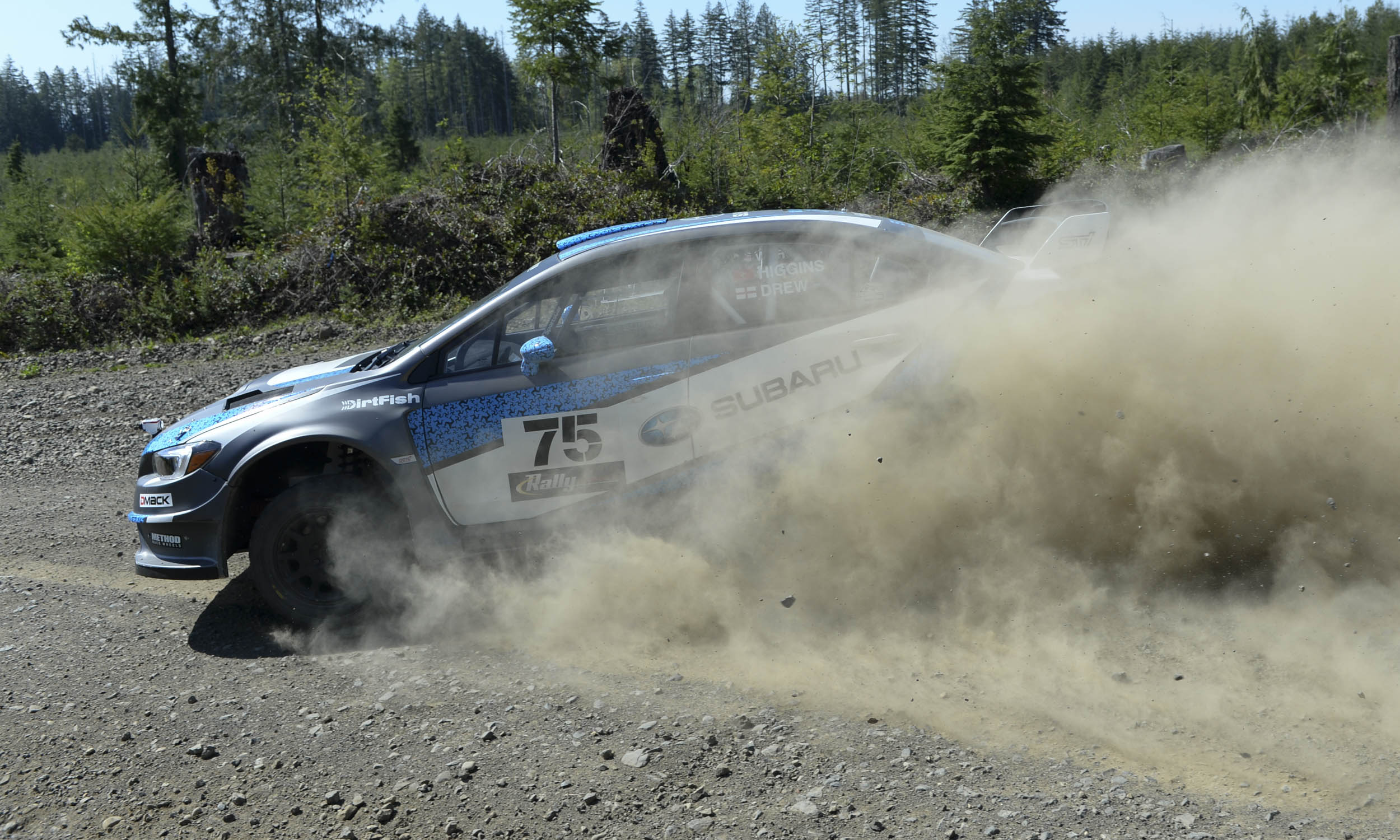 The Driver
Ultimately it’s the job of the driver — in this case David Higgins — to follow the navigation instructions and cover each rally stage in the shortest amount of time. Higgins explained, “I dictate to him [Drew] what I want him to say back to me at speed. I’m not trusting his judgement of a corner, I’m trusting my own judgement and for him to say it at the right time.” 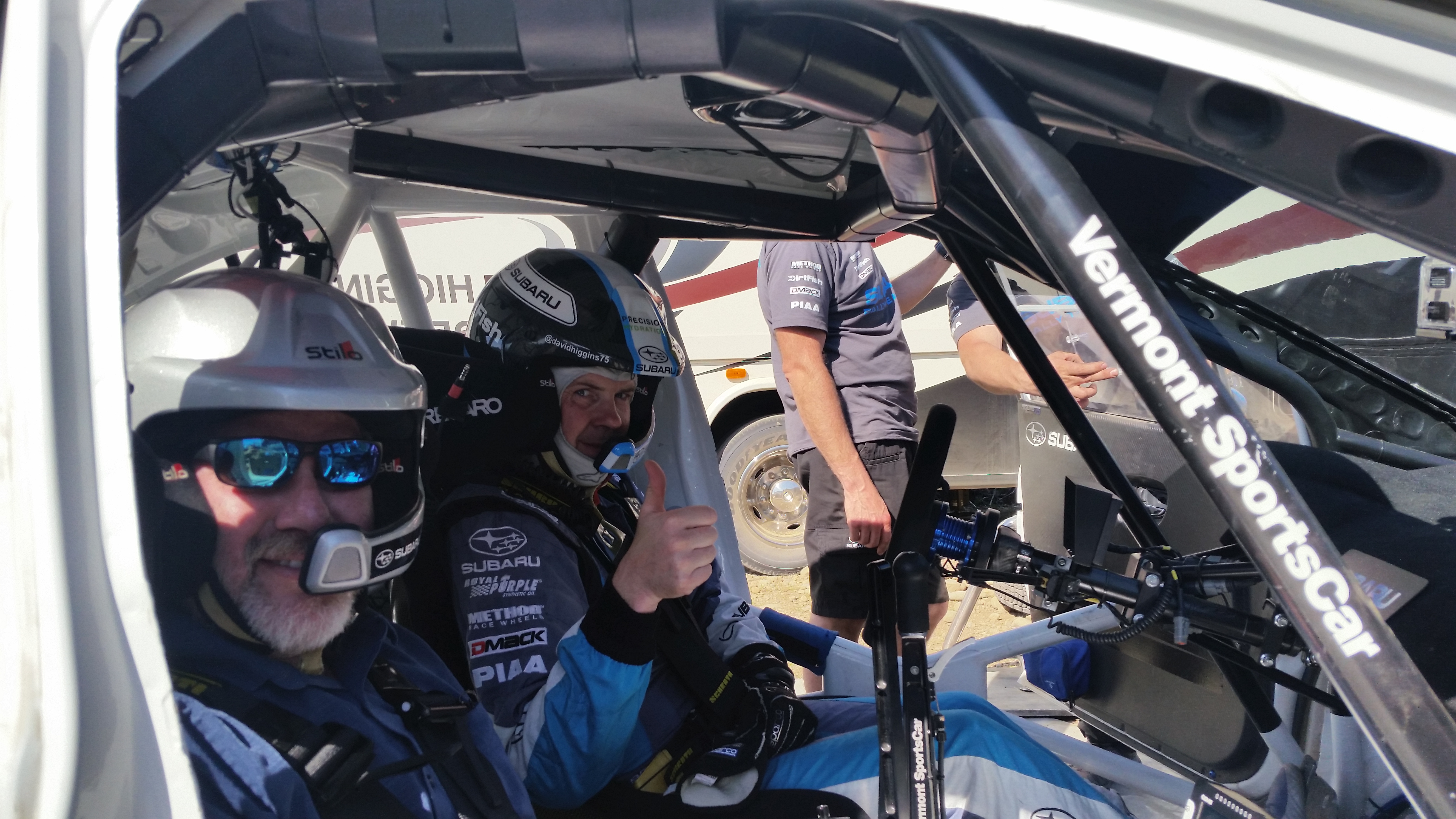 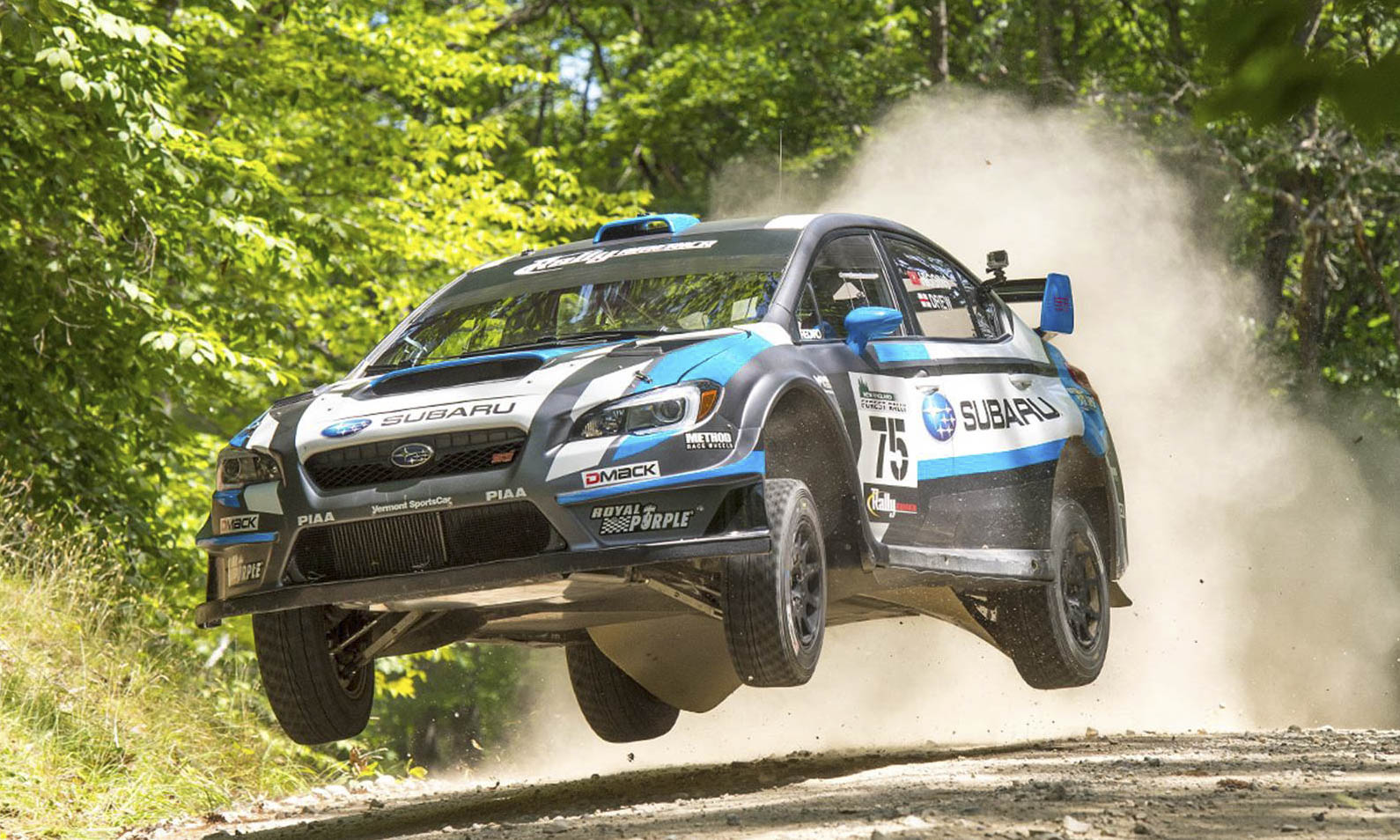 Fun Job
After our thrill ride — it was most definitely a thrill ride — we asked Higgins if he enjoys his job. “Yeah, it’s a lot of fun — I wouldn’t still be doing it . . . if it wasn’t fun. But the more professional you get and the more events you win and the more expectations are on you the pressure changes. When I jump in the car it’s not for fun — it’s my job to deliver the goods for the team.” He went on to say, “I’m not paid to be in the car to reach anything other than first place. It’s still very much a job, but I want to do this way more than being an accountant or doing some other job.” 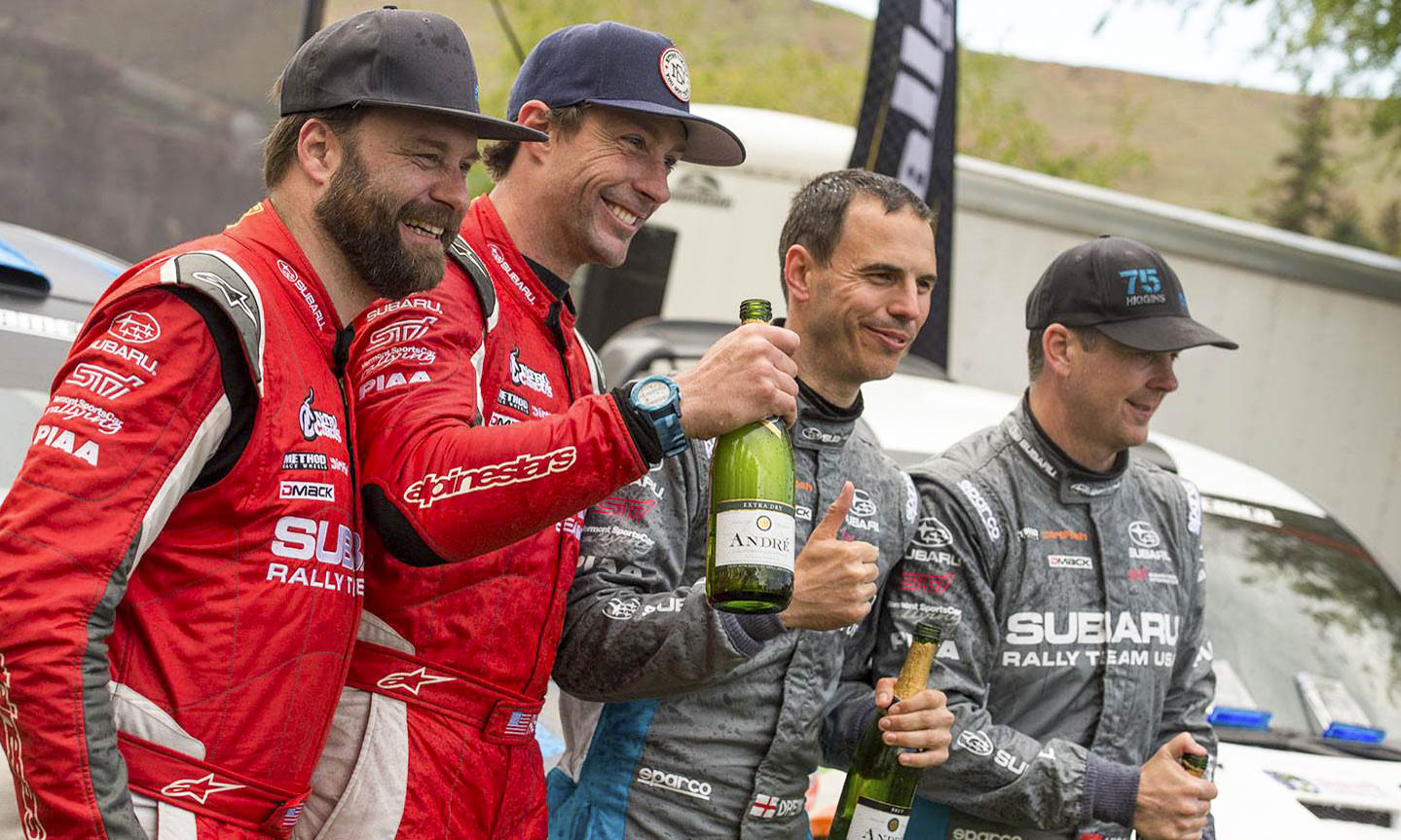 Victory in Oregon
A few days after our visit with Subaru Rally Team USA, car #75 with David Higgins (above, far right) and Craig Drew (above, second from right) took first place in the very competitive Oregon Trail Rally — the sixth consecutive time this duo has claimed victory in Oregon. “This is what sport should be, big battles, very close,” stated Higgins. “This was a very spectacular rally with three very different days. It shows what a good car we have with our Subaru WRX STI being able to adapt to three different rallies in one event, and we didn’t have to change anything. I’m very, very happy with the team and the car.” Higgins beat his teammate Travis Pastrana (above, second from left) by just 9.5 seconds — a very narrow margin after three days of racing.