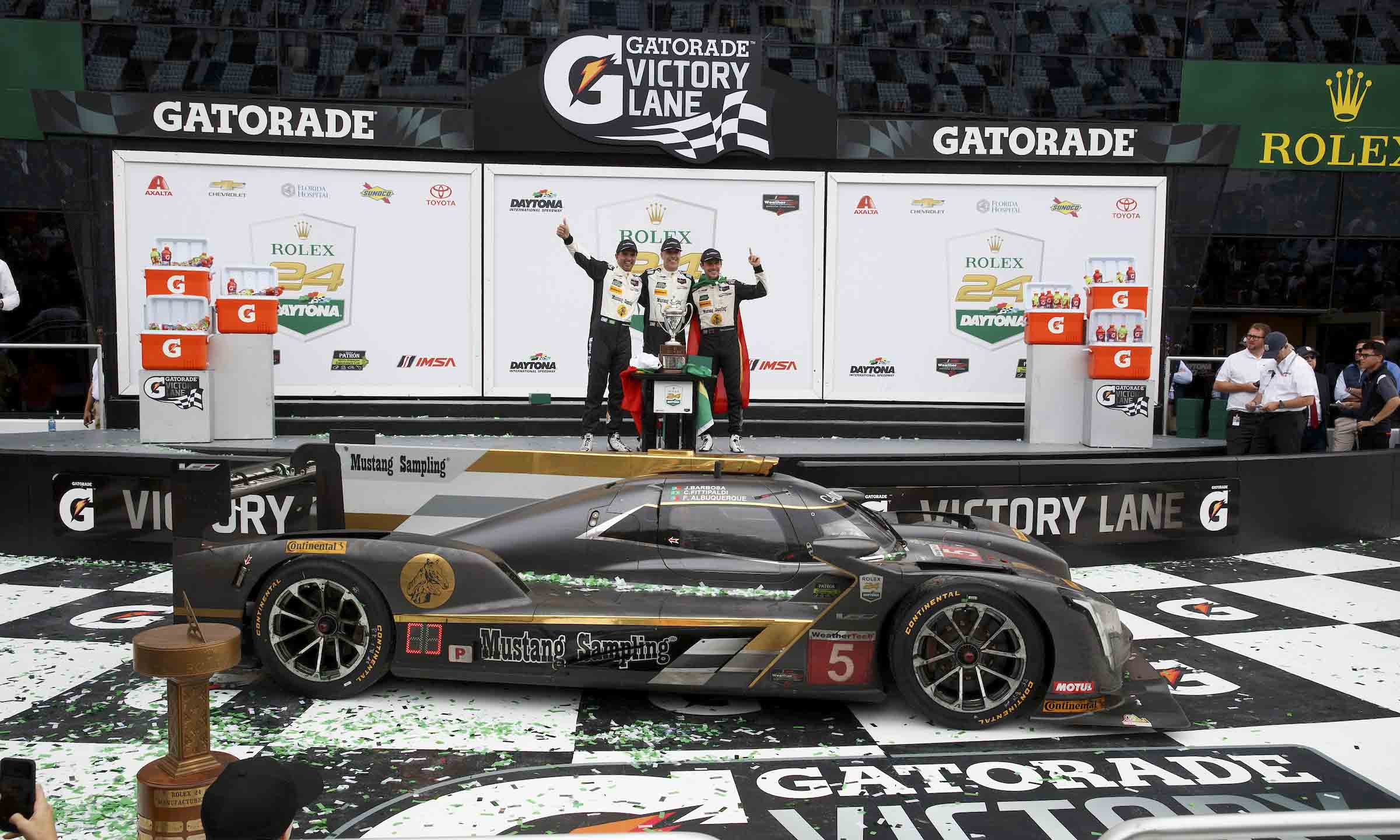 © Cadillac Racing
Cadillac Victory at Daytona
Filipe Albuquerque drove the No. 5 Mustang Sampling Racing Cadillac DPi to victory in the 2018 Rolex 24 hours at Daytona, just one year after Albuquerque was bumped from the lead by Ricky Taylor with less than 10 minutes remaining in the 2017 Rolex 24. This year’s win was the second straight victory for Cadillac in the second season of a new IMSA prototype class that includes both Daytona Prototype International and Le Mans Prototype 2 cars. The 2018 edition of the Rolex 24 at Daytona began at 2:40 pm on Saturday January 27, 2018, and concluded at the same time on Sunday afternoon. 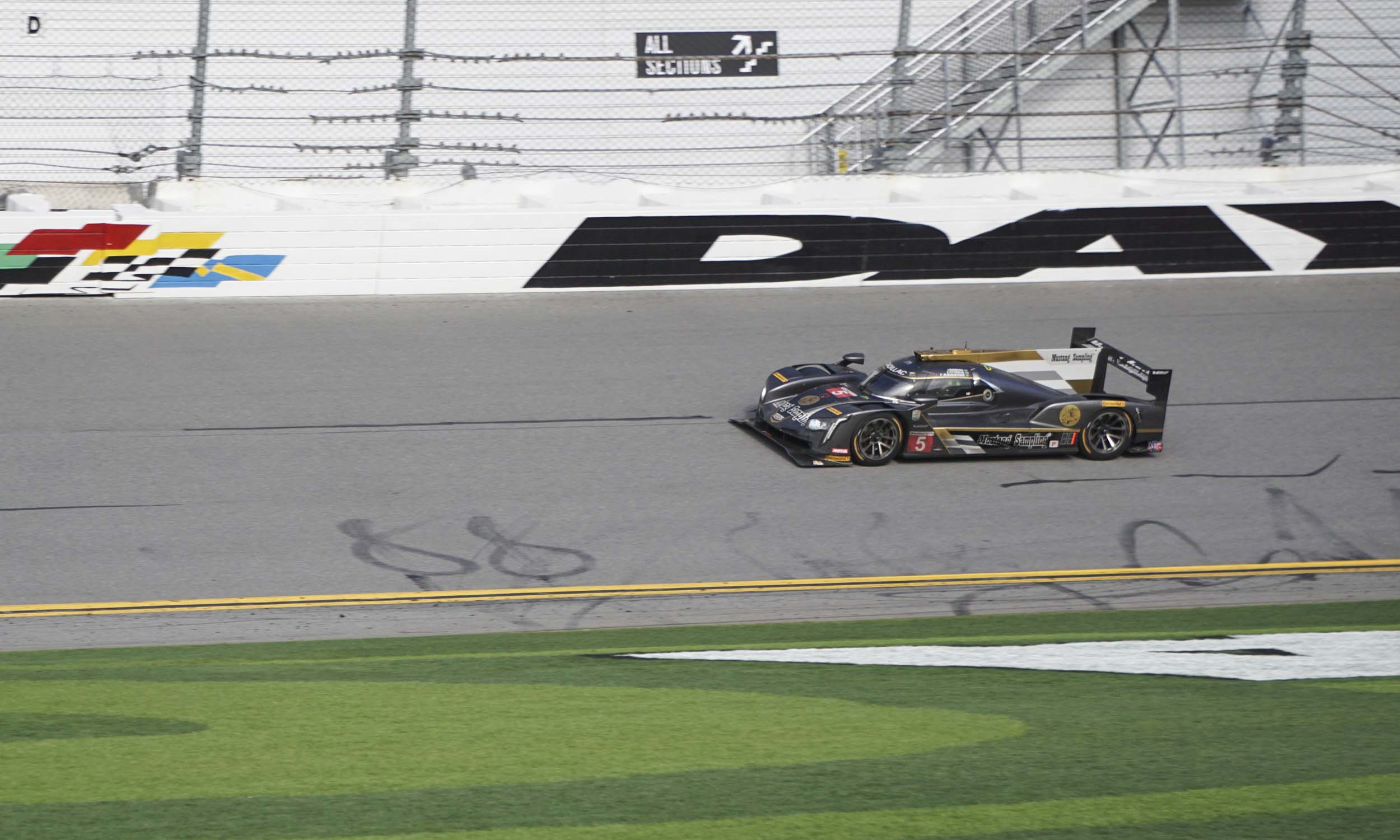 © Mike Meredith, Automotive Content Experience
New Distance Record
The traditional start of a new racing season, the Rolex 24 at Daytona is the season-opener of the 2018 IMSA WeatherTech SportsCar Championship. The 2018 Rolex 24 ran at a record pace slowed only by four full-course caution periods, none of which lasted more than five laps. The No. 5 Mustang Sampling Racing Cadillac DPi completed a record number of 808 laps and a record distance of 2876.48 miles. The previous lap record was 762 laps on the current 3.56-mile circuit, while the previous distance record was 2,760.96 miles with 719 laps completed of the previous 3.84-mile circuit. 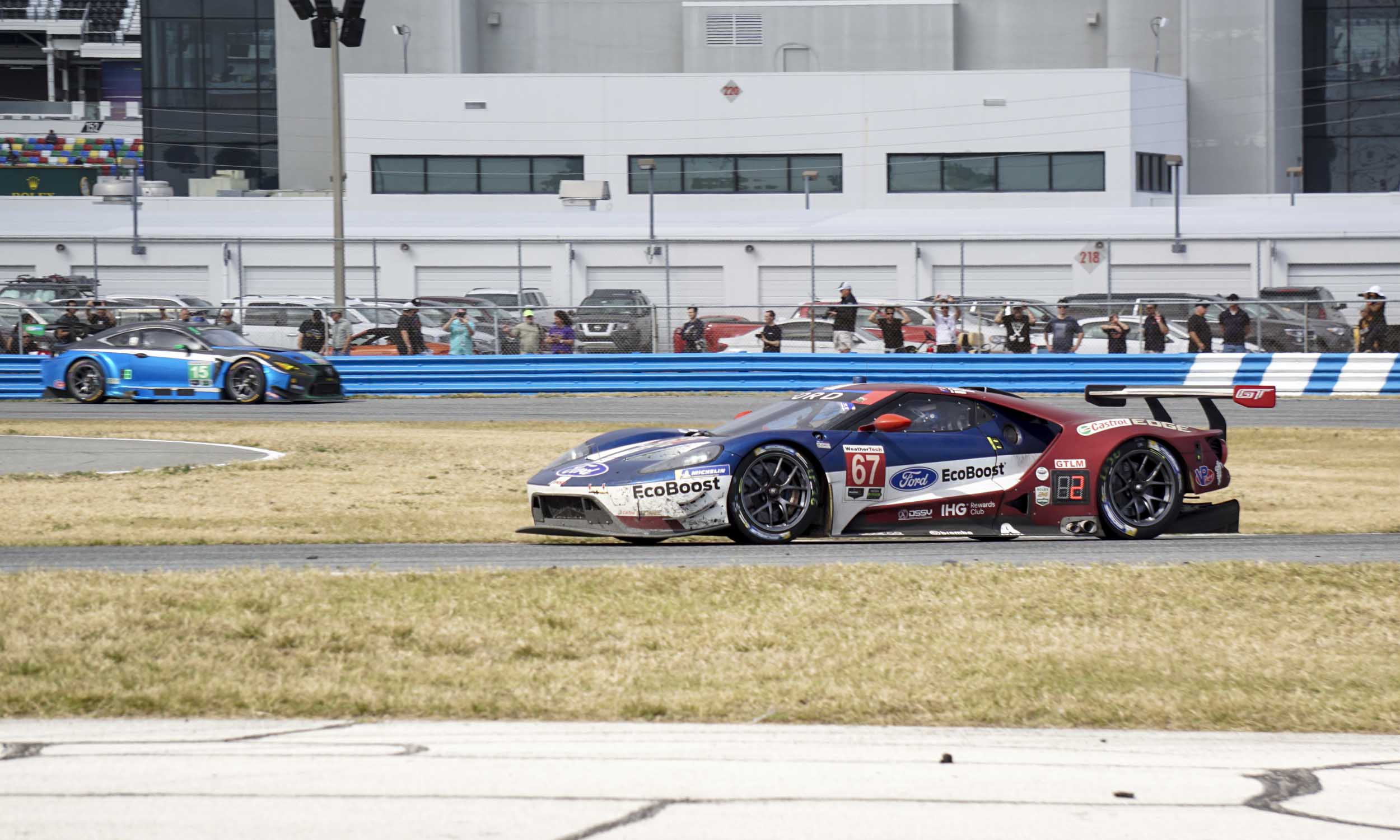 © Mike Meredith, Automotive Content Experience
GT Le Mans Class
For the second straight year, Ford Chip Ganassi Racing took the GT Le Mans win, but this year it was the No. 67 Ford GT driven by Ryan Briscoe, Richard Westbrook and Scott Dixon that took the win ahead of the No. 66 team car of Joey Hand, Dirk Mueller and Sebastian Bourdais — last year’s winners. It was also the 200th racing victory for team owner Chip Ganassi. Both Ford GTs ran at the top of the GTLM class for the entire race, and the No. 67 finished just 11. 180 seconds ahead of its sibling car after 24 hours of hard racing. 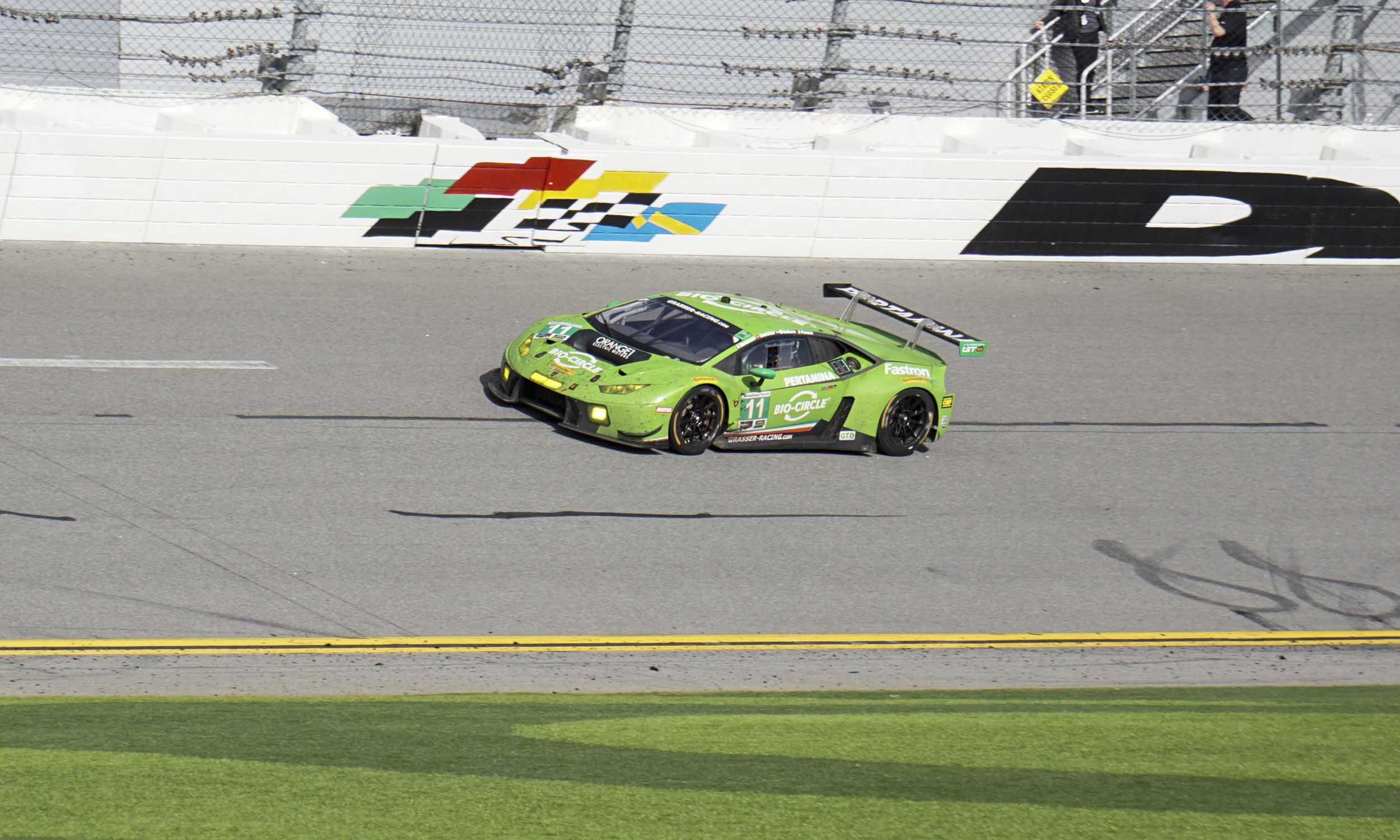 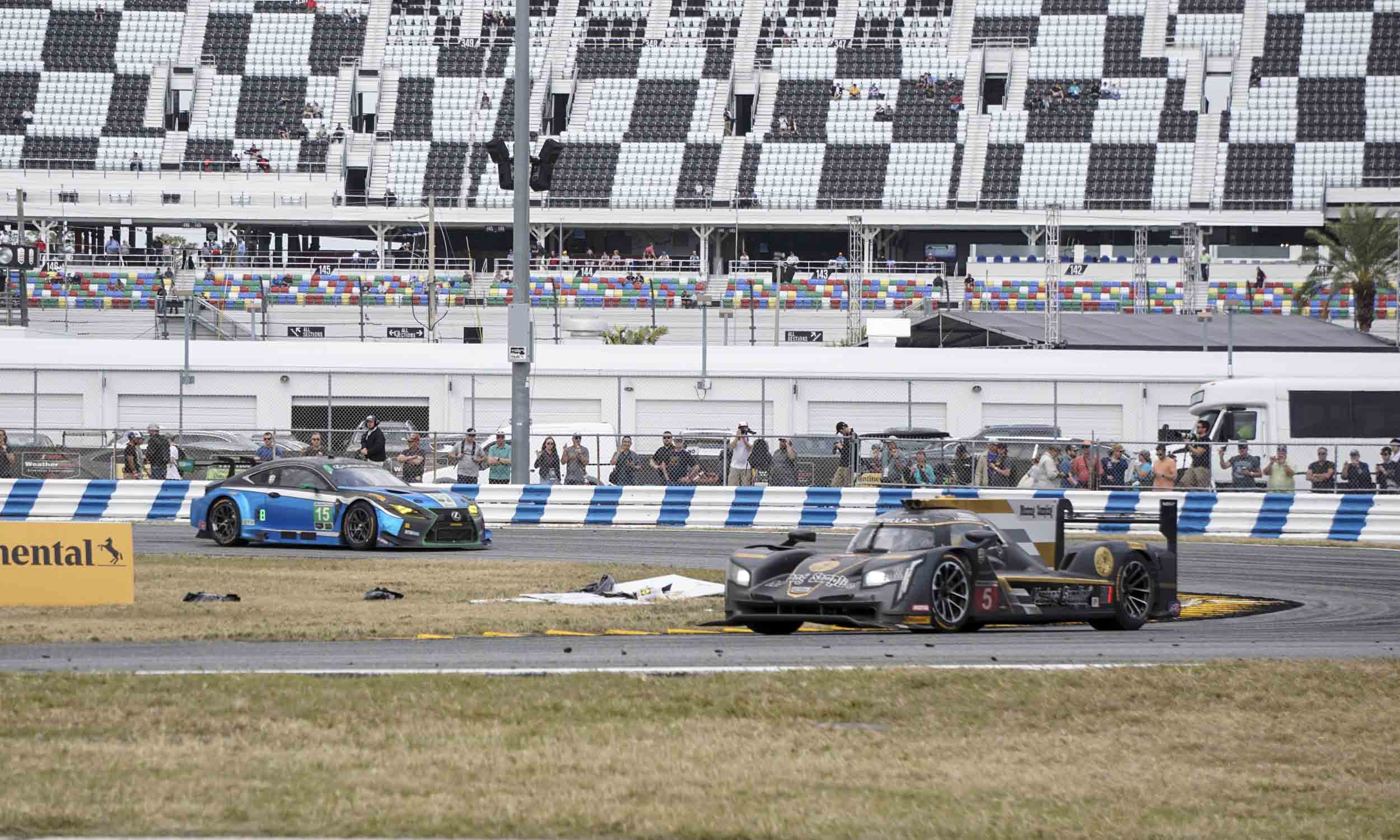 © Mike Meredith, Automotive Content Experience
Grueling Race
The Rolex 24 at Daytona is always a tough test of nerves and machines — a 24-hour endurance race held at the end of January, which means many hours of racing in the dark. Add the high-speed, high banks of Daytona International Speedway combined with a tricky infield road course section and you have a recipe for exciting racing action. Often the weather plays a role with wet or cold conditions, and this year was no exception as a rain squall rolled through early in the evening on Saturday, although temperatures this year remained mild throughout the weekend. 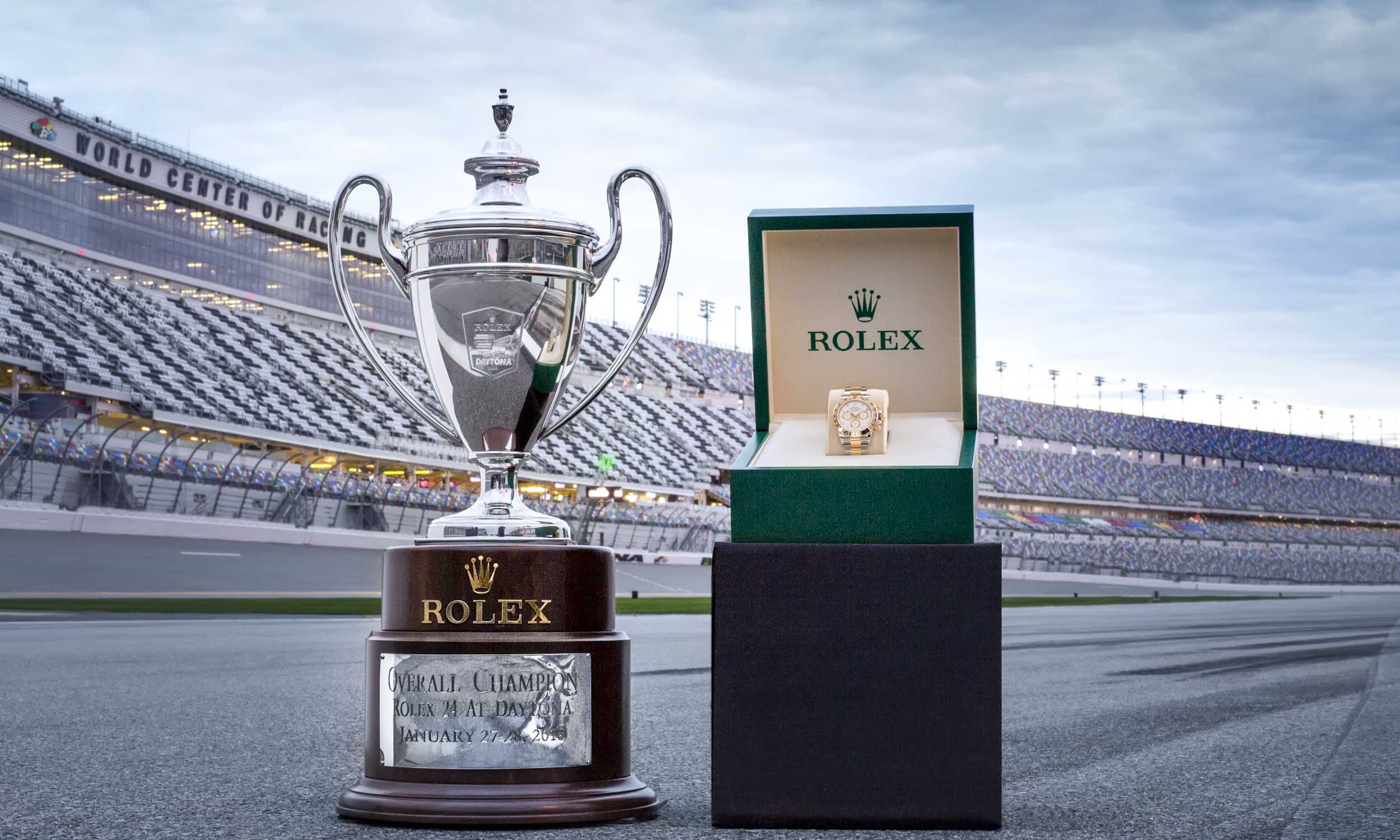 © Rolex
Rolex Daytona for the Winners
Rolex has been the title sponsor of the Rolex 24 at Daytona since 1992 and has supported the race since 1966. One of the unique aspects of the event is that in addition to the winner’s trophy, the winning drivers in each of the three classes are presented with a specially-engraved Rolex Oyster Perpetual Cosmograph Daytona, commemorating the Rolex 24 at Daytona victory for that year. The Rolex Daytona has become synonymous with racing, and many racing drivers strive to win the watch. 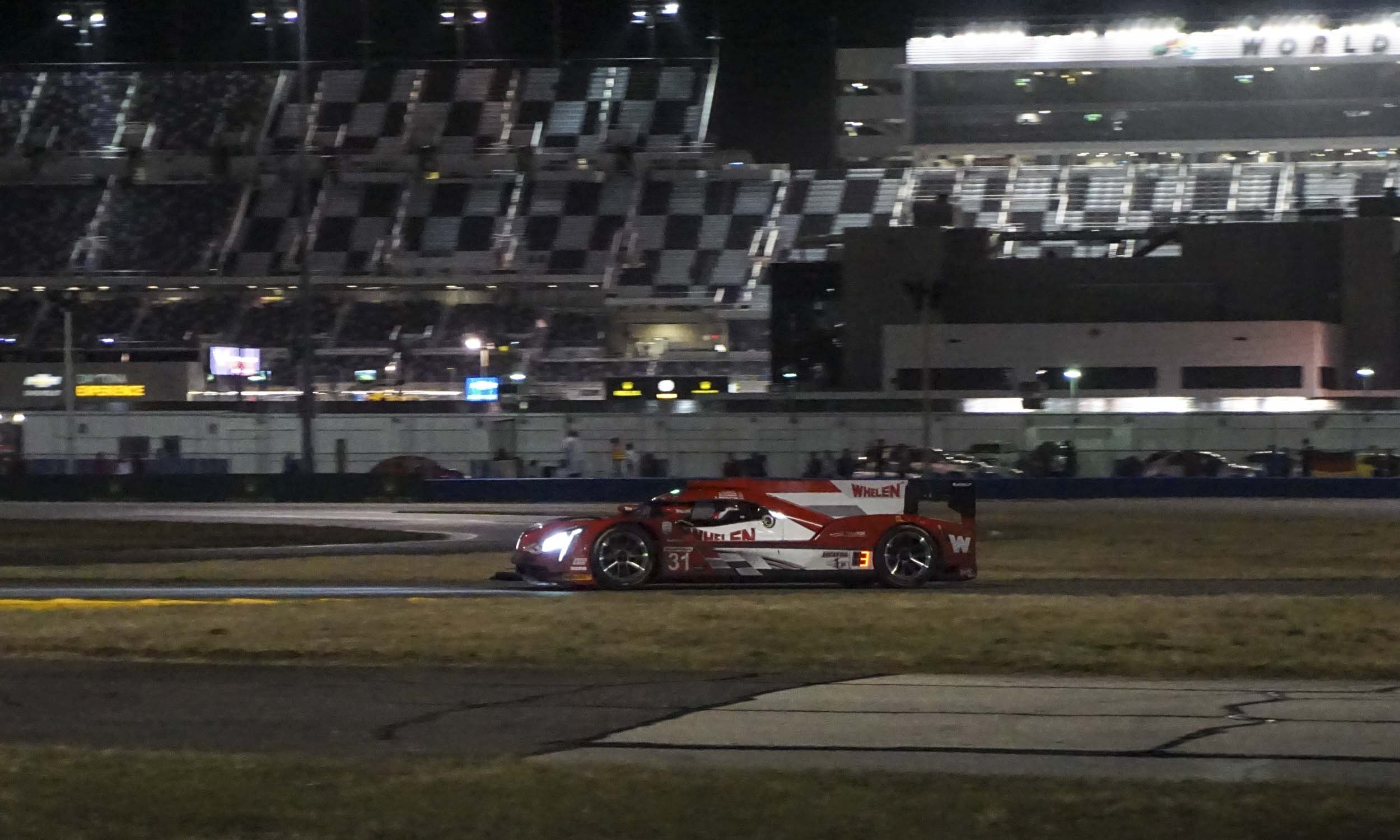 © Mike Meredith, Automotive Content Experience
Prototype Class Victory
The No. 5 Mustang Sampling Racing Cadillac DPi earned victory with a comfortable 1 minute 10 second gap over the second place No. 31 Whelen Engineering Racing Cadillac DPi, although the closing laps were not without drama. Both the No. 5 and the No. 31 cars are part of the Action Express team, and with four hours remaining in the race the No. 5 enjoyed a three-lap lead over the No. 31. But both cars experienced engine cooling issues and had to slow the pace at times to preserve the car, allowing the competition to close the gap. While both cars made it to the 24-hour mark, the No. 54 CORE autosport ORECA LMP2 was only 21.4 seconds behind the No. 31 and gaining every lap. 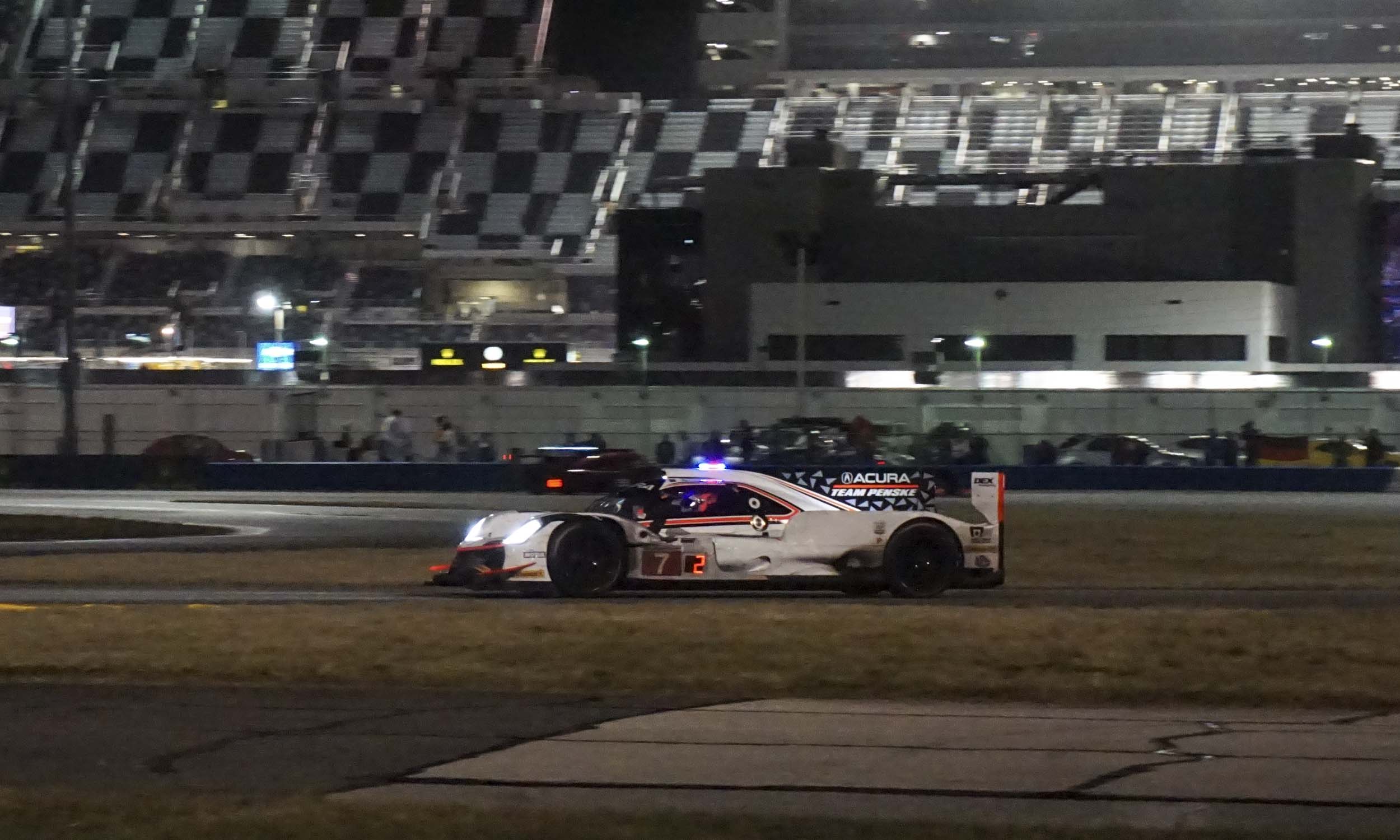 © Mike Meredith, Automotive Content Experience
Penske Returns to Sports Car Racing
Legendary race team owner Roger Penske returns to sports car racing for 2018 with the new Acura Team Penske team, fielding two new Acura DPi cars for the 2018 IMSA WeatherTech SportsCar Championship. Helio Castroneves and Ricky Taylor will pilot one car, with Juan Pablo Montoya and Dane Cameron in the other machine. For the Rolex 24, IndyCar drivers Graham Rahal and Simon Pagenaud completed the formidable driver lineup. Things started well when Castroneves just missed pole position by 7/1000 of a second in the debut of the new Acura prototype. Both cars ran in the top five in the early stages of the race; at the 12-hour mark the No. 6 Team Penske Acura DPi of Dane Cameron, Juan Pablo Montoya and Simon Pagenaud was in the lead. Both cars encountered issues and the No. 7 finished ninth with the No. 6 in tenth, on the same lap and only 6 seconds behind after 24 hours. 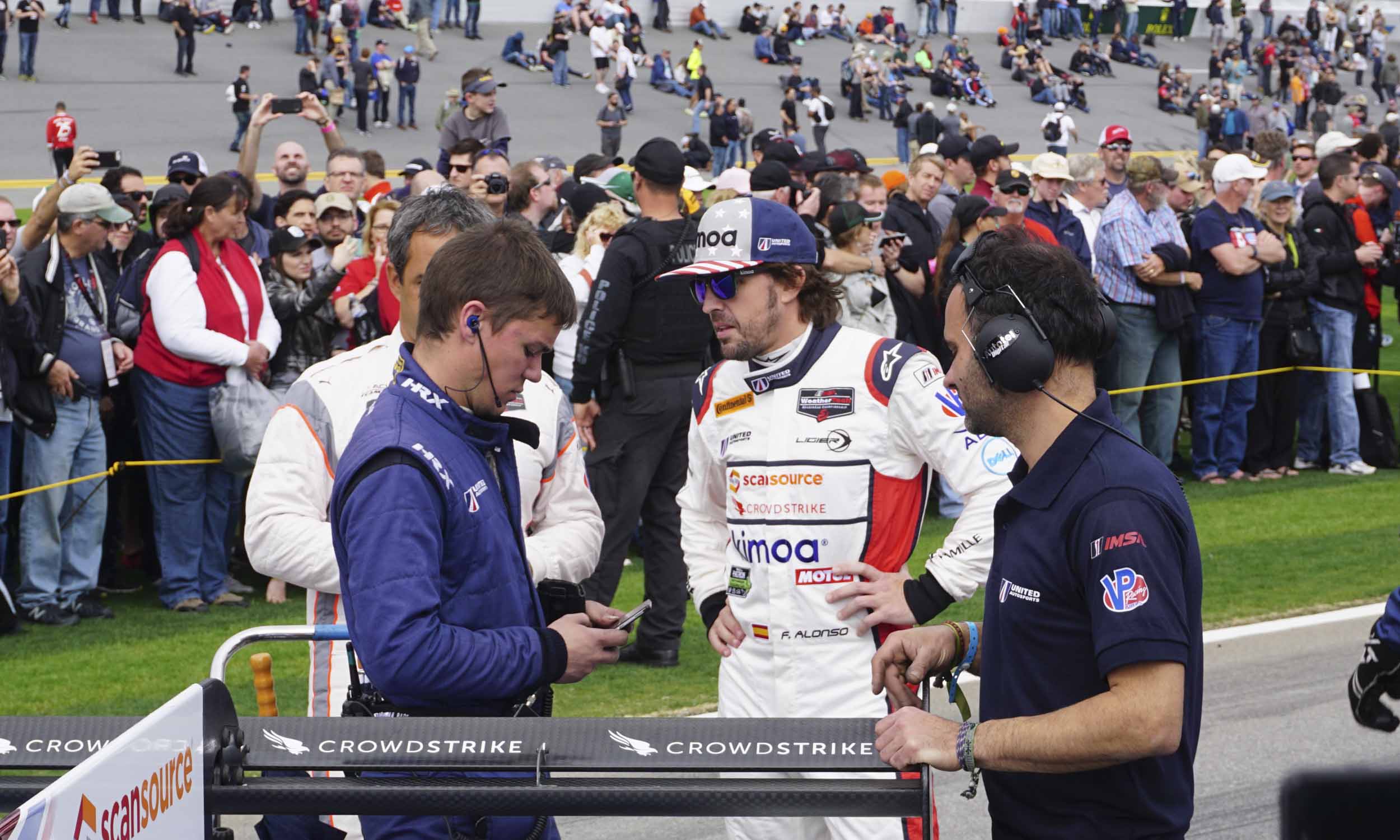 © Mike Meredith, Automotive Content Experience
F1 Champ Fernando Alonso
Last year, two-time Formula 1 World Champion Fernando Alonso made an impressive debut in his first Indy 500, and this year Alonso raced in the Rolex 24 for the first time. Alonso teamed with Phil Hanson and Lando Norris in the No. 23 United Autosports Ligier LMP2 and ran with the leaders in the first half of the race. An issue with the brakes required extensive repairs in the garage, dooming the No. 23 to finish 13th in the prototype class. “Maybe the nicest thing was how competitive we felt,” Alonso said. “Because we entered the race with no high hopes because we were never competitive, and suddenly we picked up the pace and everyone was smiling in the garage. That was a nice feeling,” Alonso concluded. 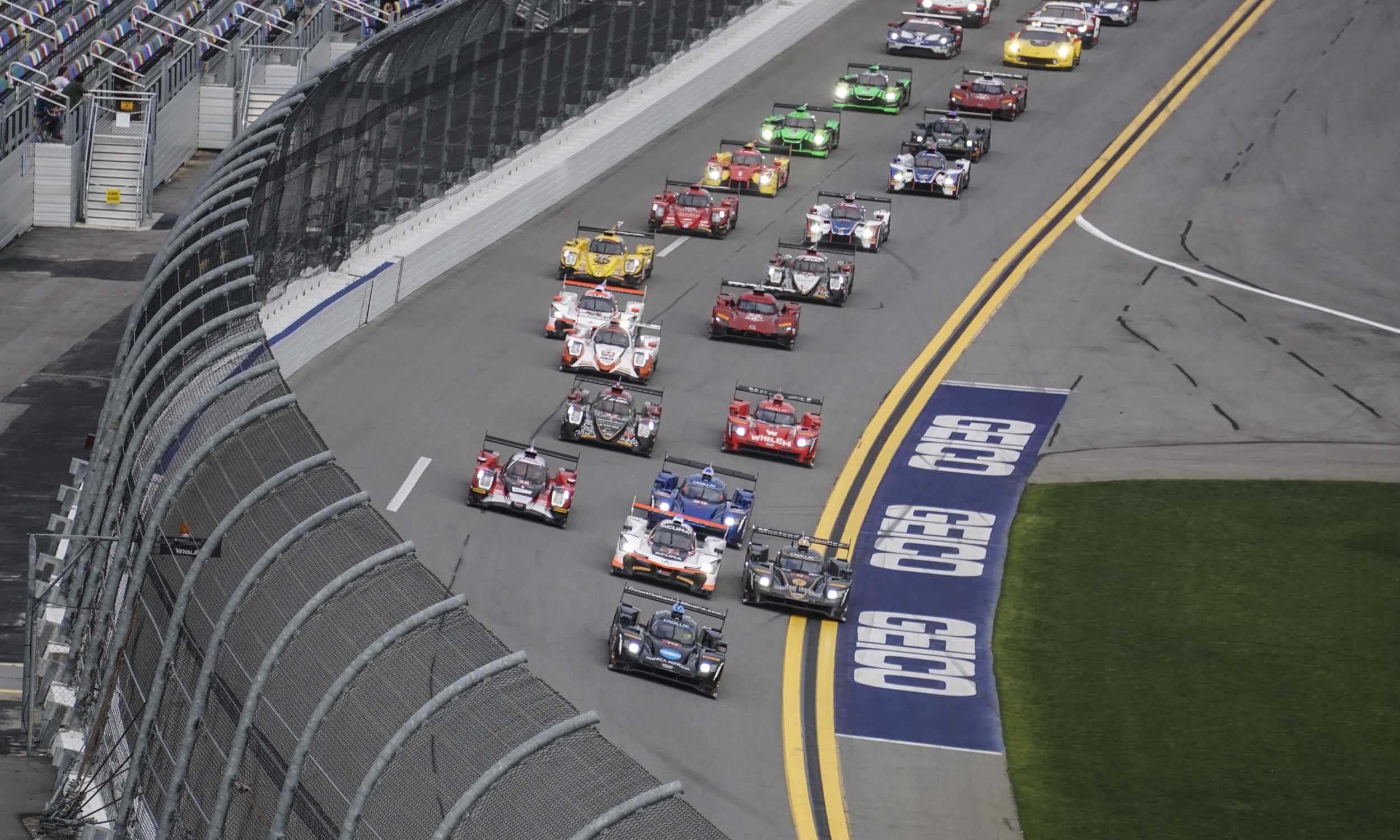 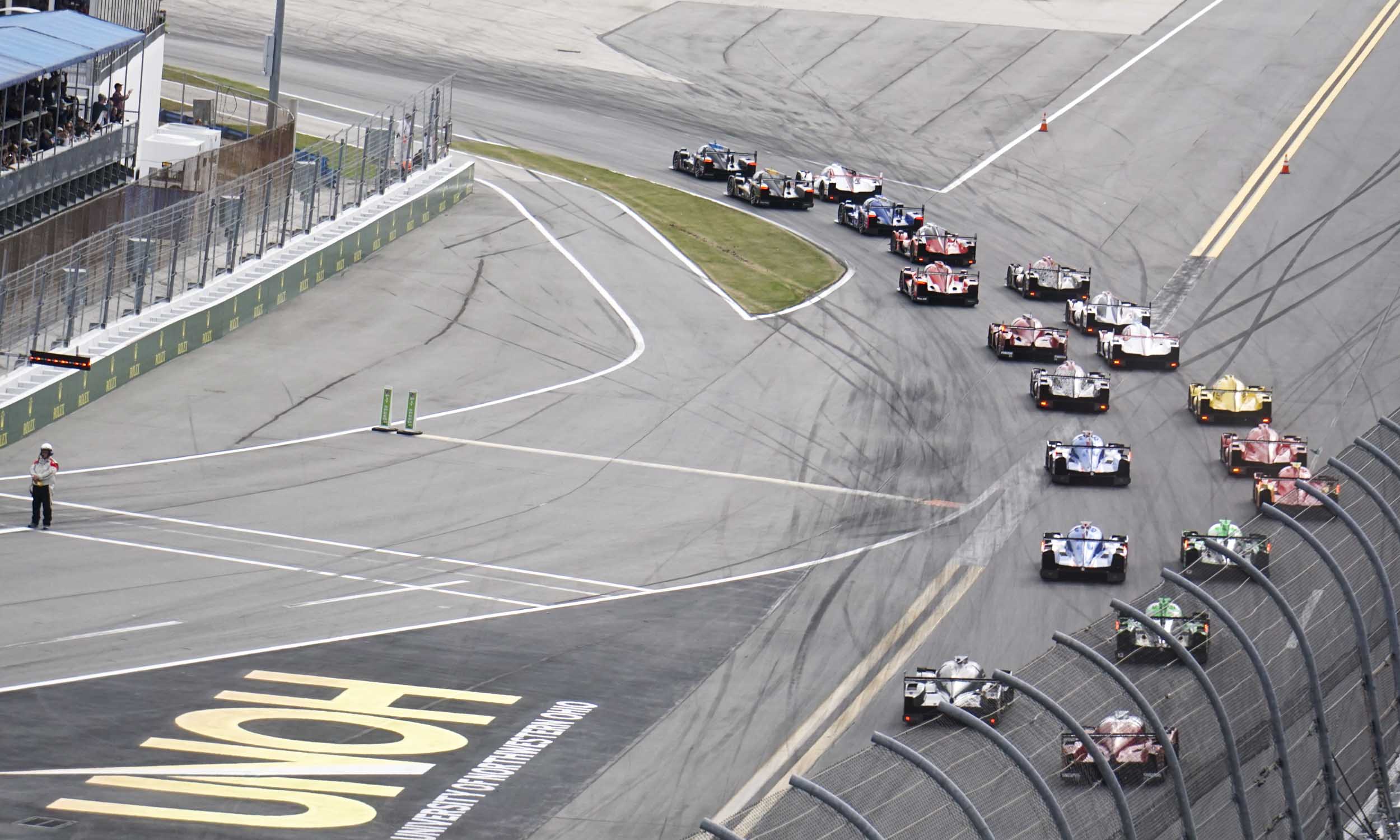