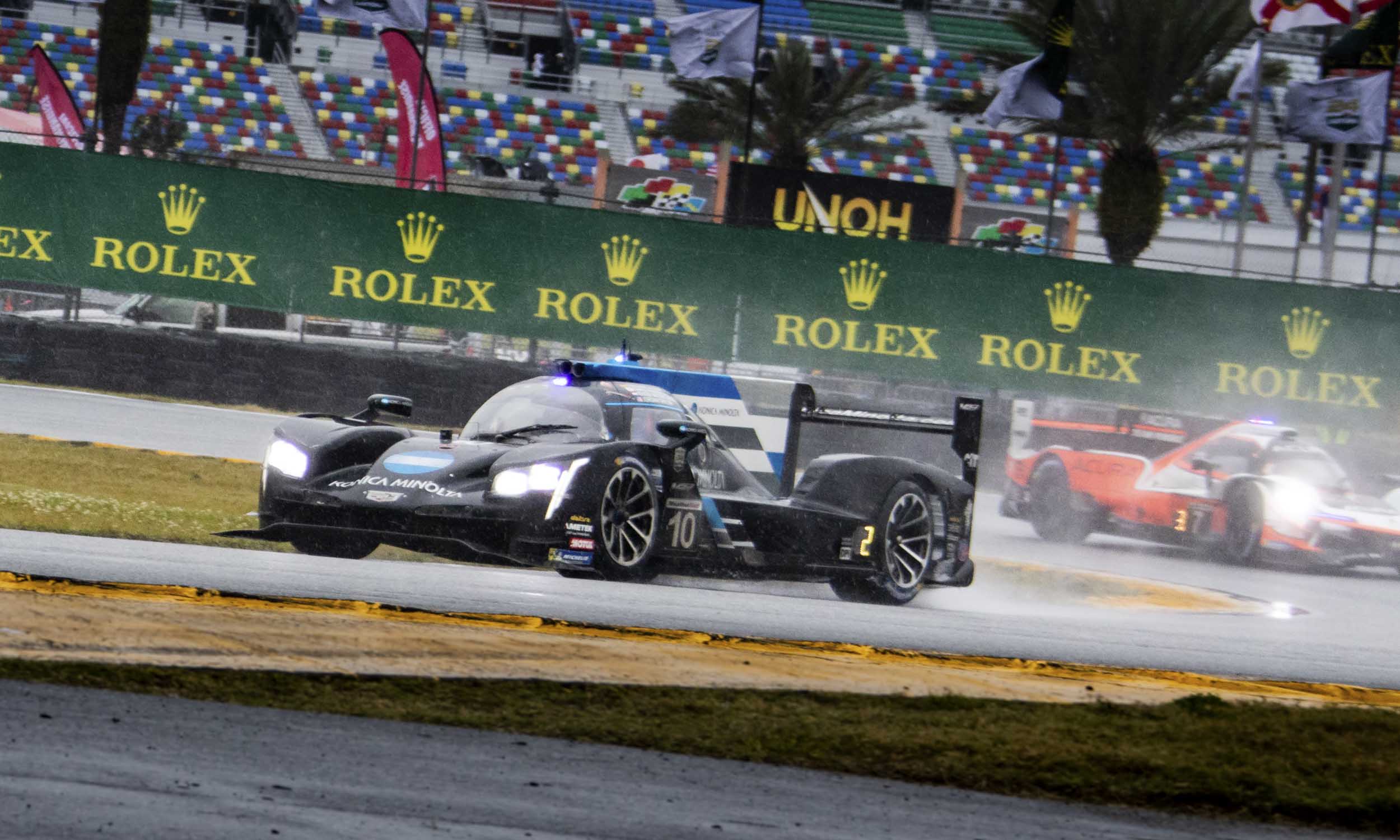 2019 Rolex 24
The No. 10 Konica Minolta Cadillac team persevered through heavy rain to claim victory in the 2019 Rolex 24 At Daytona. The 57th running of the grueling endurance sports car race, the 2019 Rolex 24 was the first time in its history that the race had to be stopped — twice — with two red-flag periods due to heavy rain and poor track conditions. The race ended about 10 minutes prior to the scheduled conclusion when the checkered flag waved at the finish line as the cars sat parked in a line on pit lane. 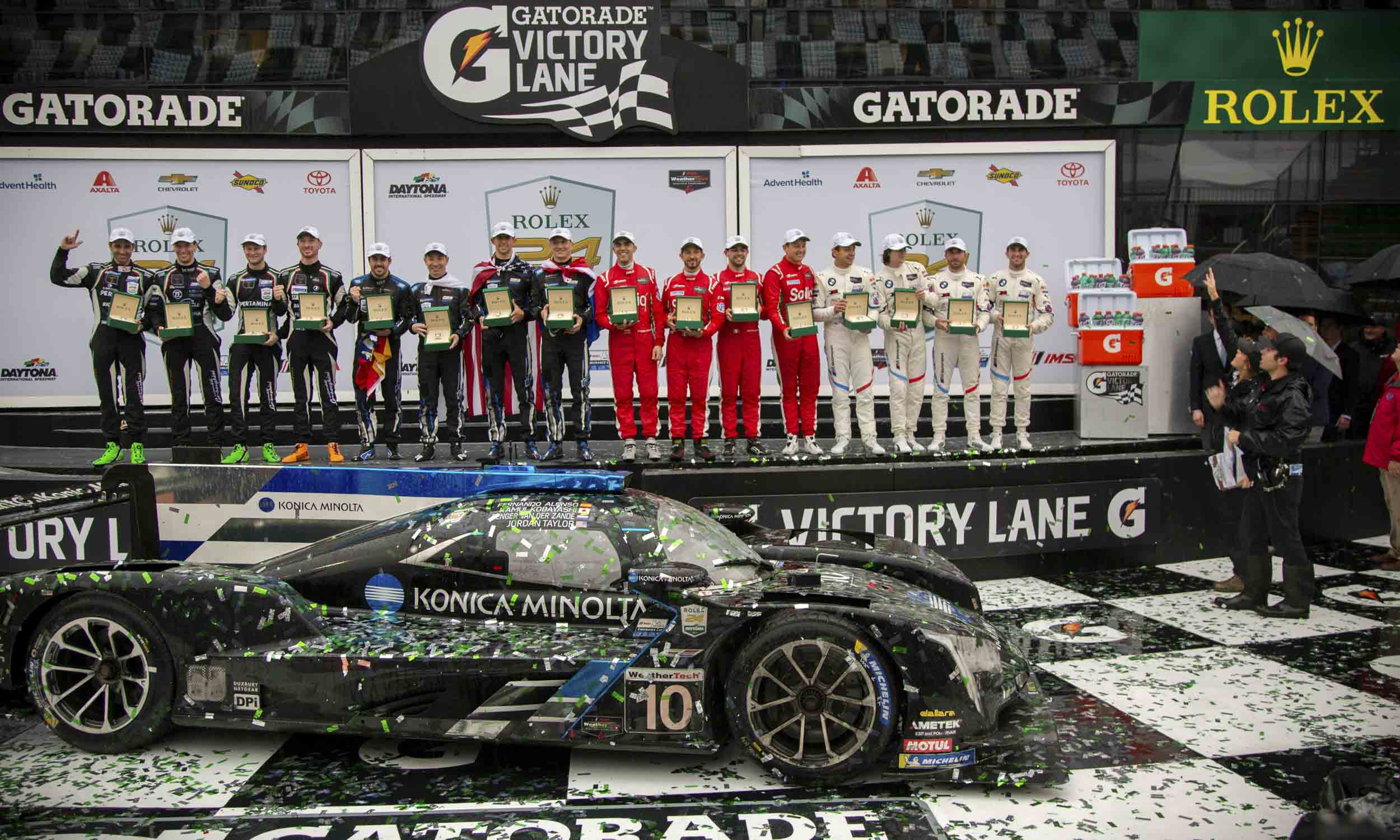 Three in a Row
The victory was the third consecutive win for Cadillac in the Rolex 24 At Daytona, and the second victory in three years for the No. 10 Cadillac of Wayne Taylor Racing. For the 2019 Rolex 24, full-season drivers Jordan Taylor and Renger van der Zande were joined by two-time Formula One World Champion Fernando Alonso and Kamui Kobayashi, Japanese ex-F1 driver and a full-time driver of the No. 7 Toyota LMP1 car in the FIA World Endurance Championship. With just over two hours remaining in the race, Alonso moved the No. 10 Konica Minolta Cadillac DPi-V.R into the lead for the final time when Felipe Nasr spun off course in Turn 1 in the No. 31 Whelen Engineering Cadillac DPi-V.R and Alonso squeezed past. Ten minutes later the race was red-flagged for the second and final time. 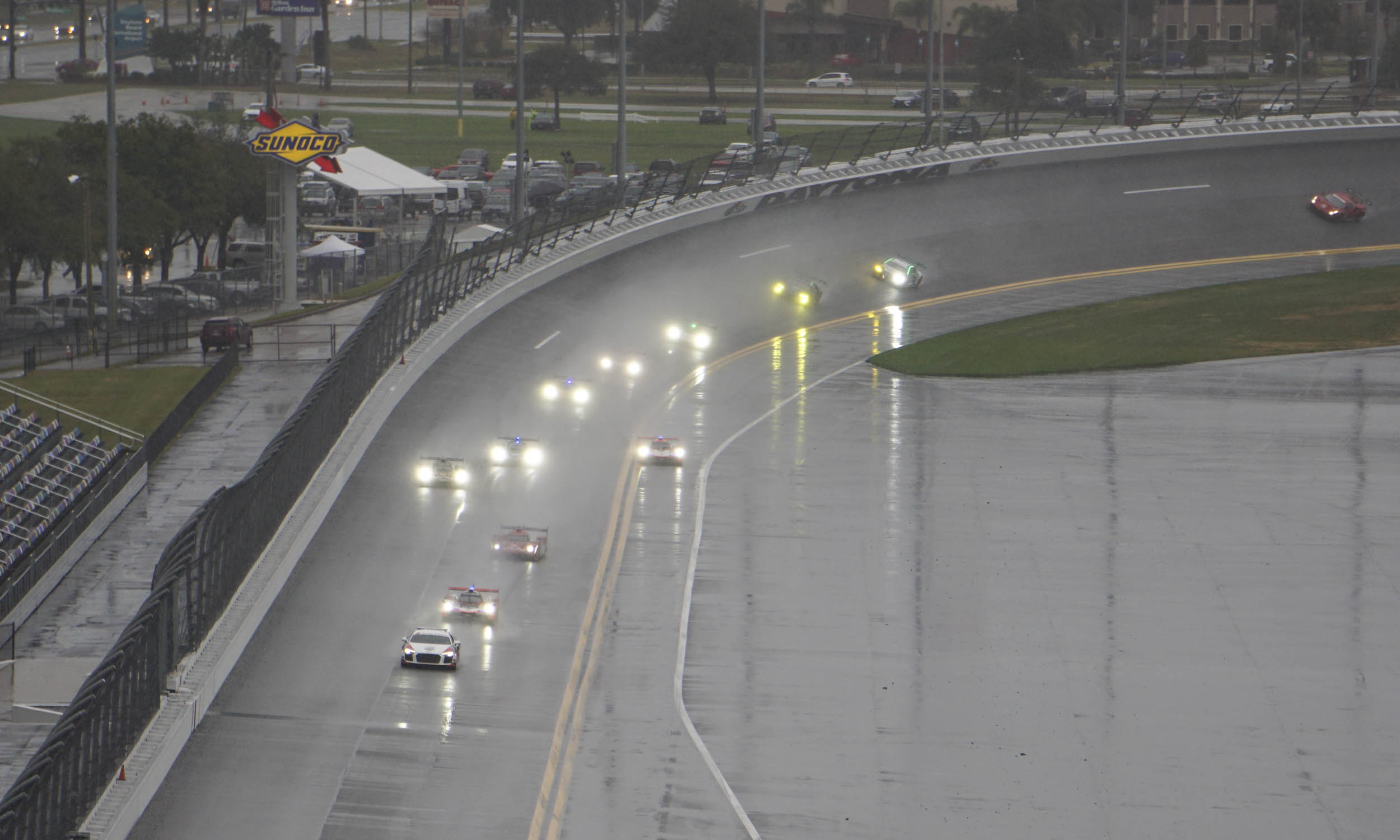 Weather Race
The 2019 edition of the Rolex 24 At Daytona, the first race of the 2019 WeatherTech SportsCar Championship, began at 2:35 pm on Saturday January 26, 2019, under cool temperatures that continued into the night — very typical conditions for this race. But things changed at 5:30 a.m. Sunday morning when it began raining, becoming heavier and creating standing water on the track surface. At 7:22 a.m. the race was red flagged; the cars exited the track and lined up on pit lane to wait out the deluge. 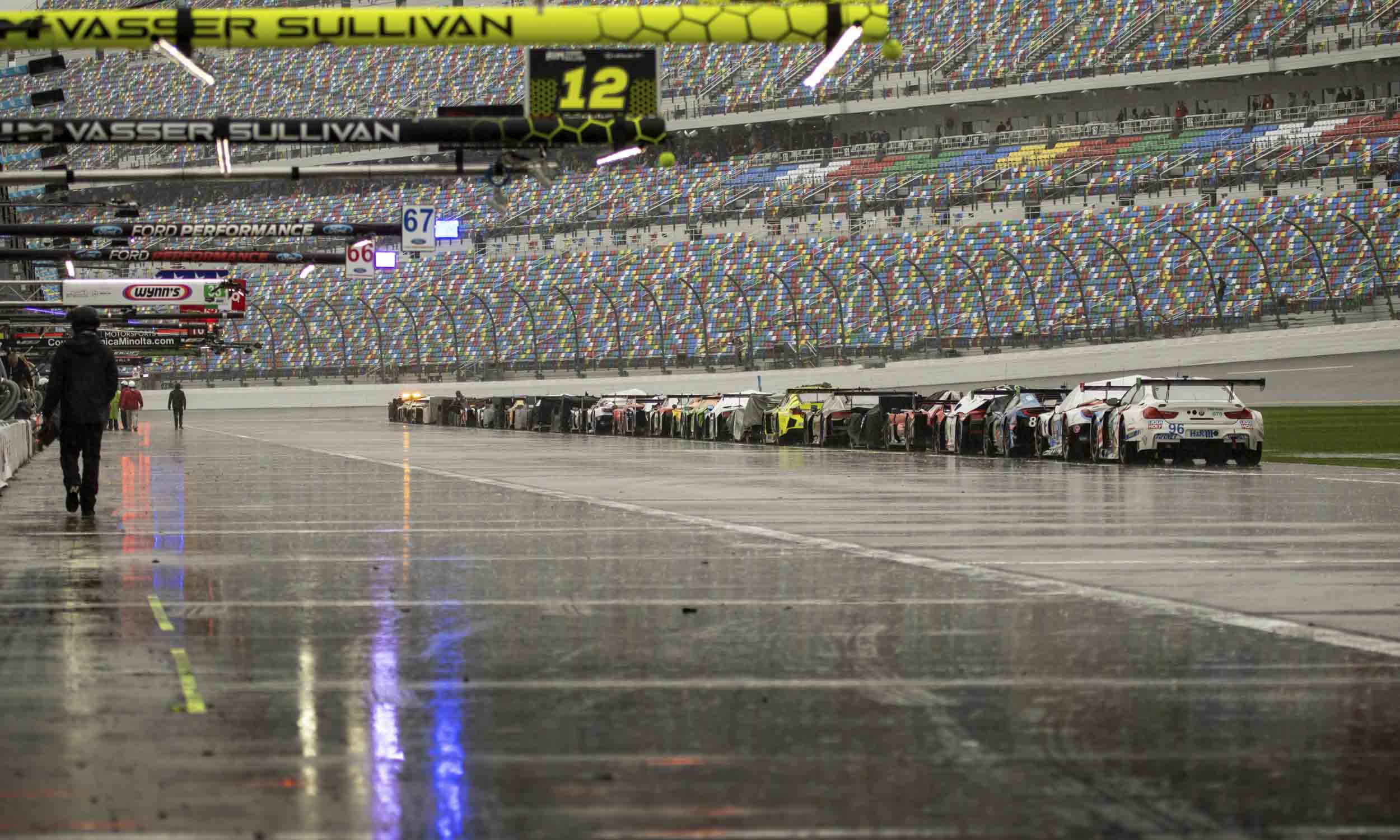 Back to Racing
The race resumed at 9 a.m. under caution behind the safety car, and on the first green-flag lap several cars spun on the slick track before reaching the start-finish line. Racing continued under caution- and green-flag conditions until the red flag flew again at 12:40 p.m. Drivers, team owners and race fans waited patiently to see if the rain would ease up and allow IMSA officials to put cars back on the track. Unfortunately at 2:26 p.m. the checkered flag flew, ending the race about 10 minutes before the scheduled completion of the 24-hour event. 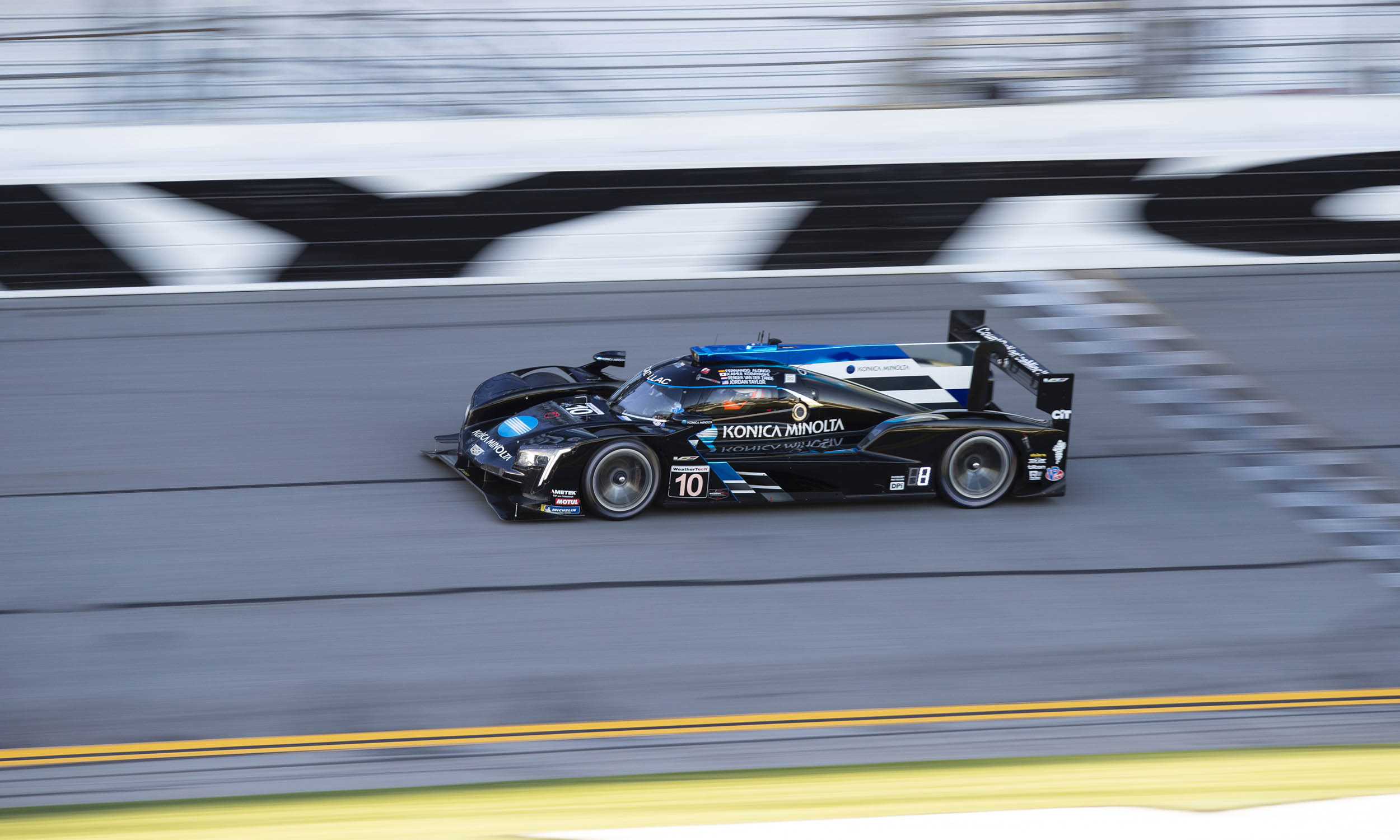 Daytona Prototype International
For the 2019 season, the WeatherTech SportsCar Championship split the prototype class into two separate classes: Daytona Prototype International and Le Mans Prototype 2. With the overall victory, the No. 10 Konica Minolta Cadillac DPi took the DPi victory followed by the No. 31 Cadillac DPi driven by Nasr with co-drivers Pipo Derani and Eric Curran. It was the second straight runner-up result in the Rolex 24 for Nasr and Curran, who went on to win both the WeatherTech Championship and IMSA Michelin Endurance Cup Prototype titles in 2018. Third in the DPi class was the No. 7 Acura Team Penske Acura DPi driven by Ricky Taylor, Helio Castroneves and Alexander Rossi. The trio combined to lead a total of 78 laps during the race, but the weather and the final red flag denied them the opportunity to fight for the lead at the end. 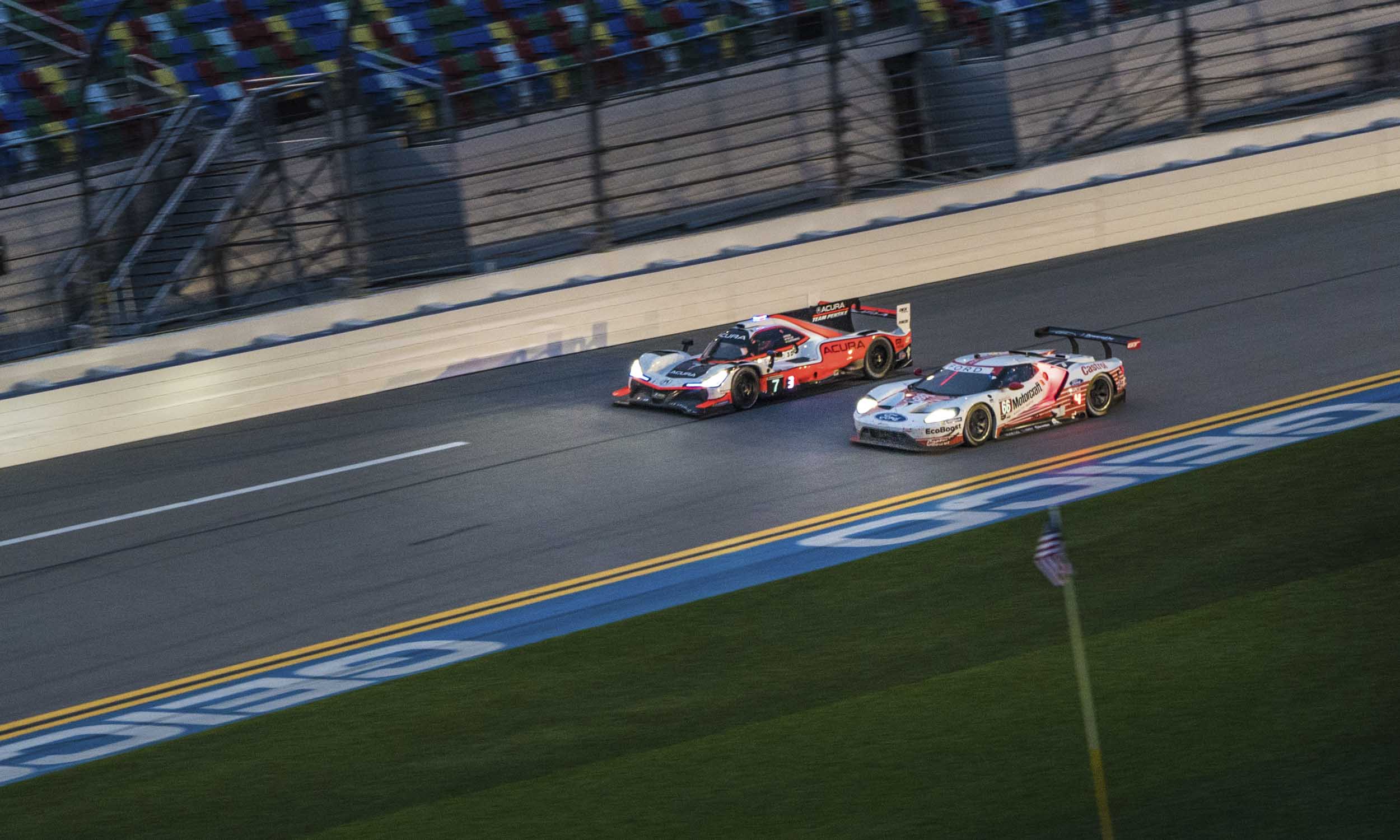 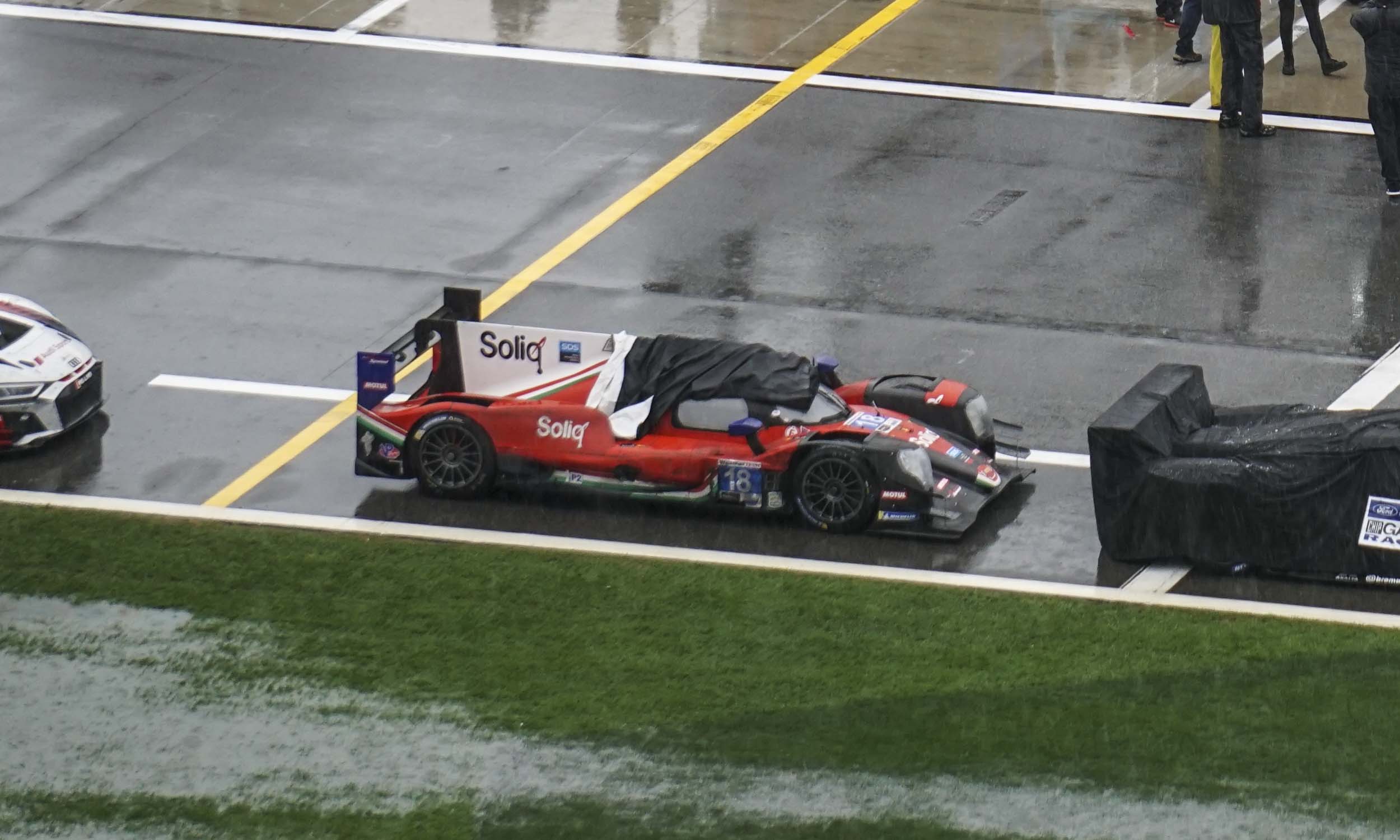 Le Mans Prototype 2
The No. 18 DragonSpeed ORECA took the victory in the LMP2 class, but not without drama and the aid of the final red flag. Just before the race was stopped for the final time, Sebastian Saavedra — who was leading the LMP2 class — crashed the No. 18 DragonSpeed ORECA into the tire barrier causing body damage. He was able to restart the car, and the red flag secured a 3-lap margin of victory for Saavedra and co-drivers Roberto Gonzalez, Ryan Cullen and Pastor Maldonado. Second in class was the No. 38 Performance Tech Motorsports LMP2 driven by Cameron Cassels, Kris Wright, Kyle Masson and Robert Masson, followed by the No. 81 DragonSpeed ORECA driven by Henrik Hedman, Ben Hanley, Nicolas Lapierre and James Allen. 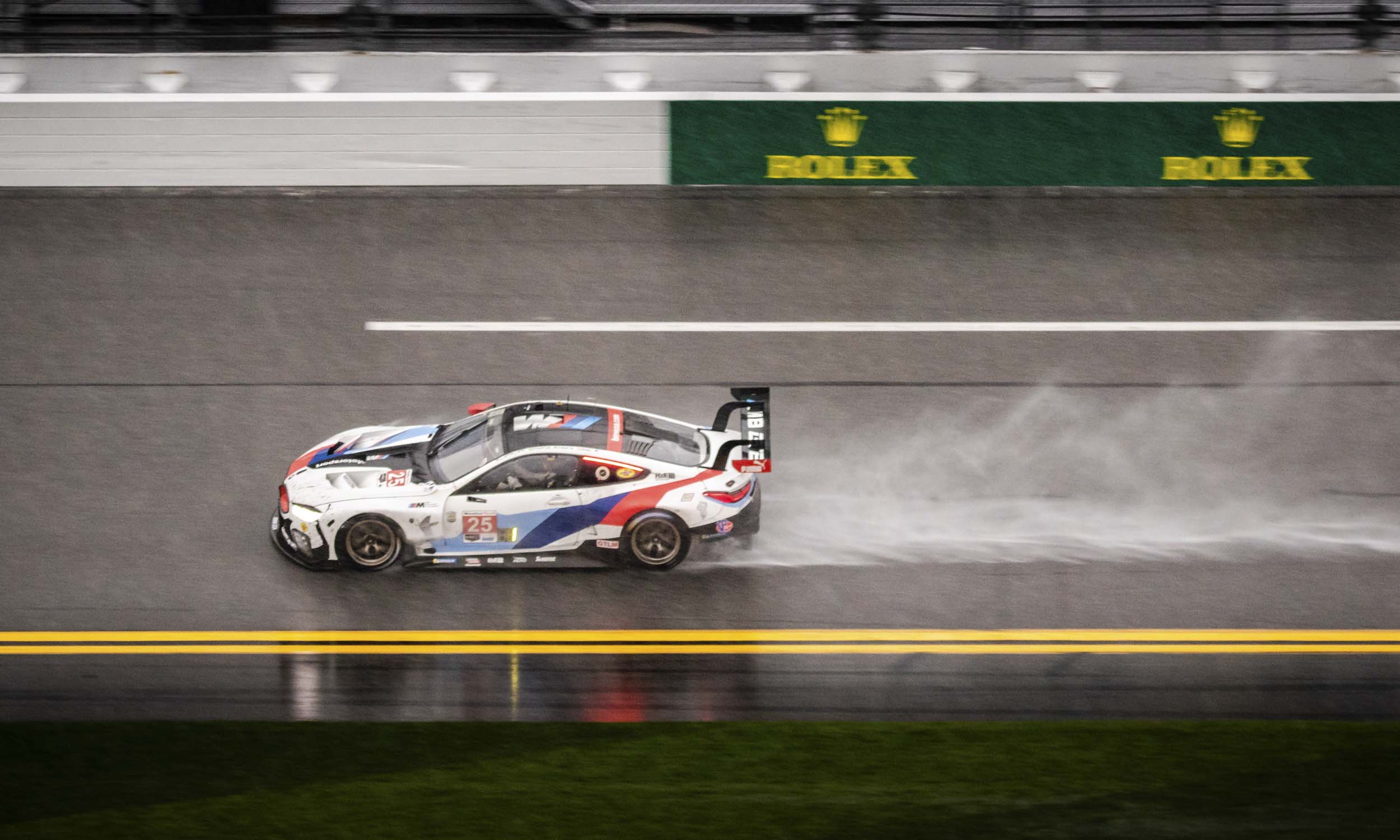 GT Le Mans
As always, the GTLM class provided some of the closest racing throughout the event, with the class victory decided minutes before the final red flag. Augusto Farfus driving the No. 25 BMW Team RLL BMW M8 GTE took the lead when Richard Westbrook driving the No. 67 Ford Chip Ganassi Racing Ford GT made an emergency pit stop for fuel just as the red flag came out. Westbrook was penalized for pitting when the pits were closed, dropping the No. 67 to fourth in class. Farfus shared driving duties in the No. 25 BMW with Colton Herta, Connor De Phillippi and Philipp Eng. Second in class was the No. 62 Risi Competizione Ferrari 488 GTE driven by Alessandro Pier Guidi, James Calado, Davide Rigon and Miguel Molina, with the No. 912 Porsche GT Team Porsche 911 RSR driven by Patrick Pilet, Nick Tandy and Frederic Makowiecki moved in third. 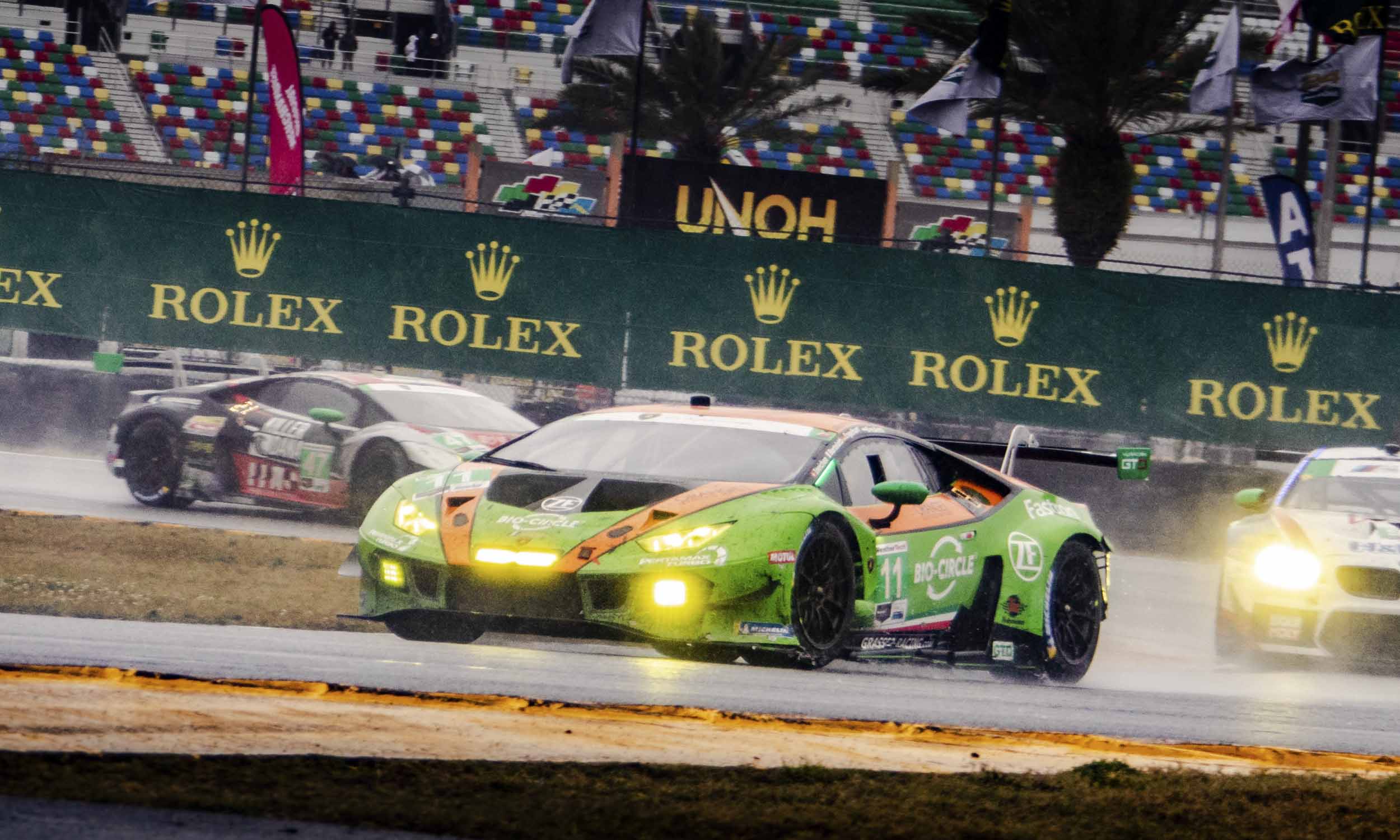 GT Daytona
When Christian Engelhart started his last stint in the No. 11 GRT Grasser Racing Team Lamborghini Huracan GT3 he was a lap down on the GT Daytona class but managed to pass the class leader before the next caution to get back on the lead lap. Before the final red flag, Engelhart moved up from eighth position to first in class to claim a second consecutive Rolex 24 At Daytona GTD class win for the No. 11 Lamborghini Huracan. Second in GTD was the No. 29 Montaplast by Land Motorsport Audi R8 LMS GT3 driven by Dries Vanthoor, Daniel Morad, Christopher Mies and Ricky Feller, with the No. 12 AIM Vasser Sullivan Lexus RC F GT3 third in GTD, piloted by Townsend Bell, Aaron Telitz, Jeff Segal and Frank Montecalvo. 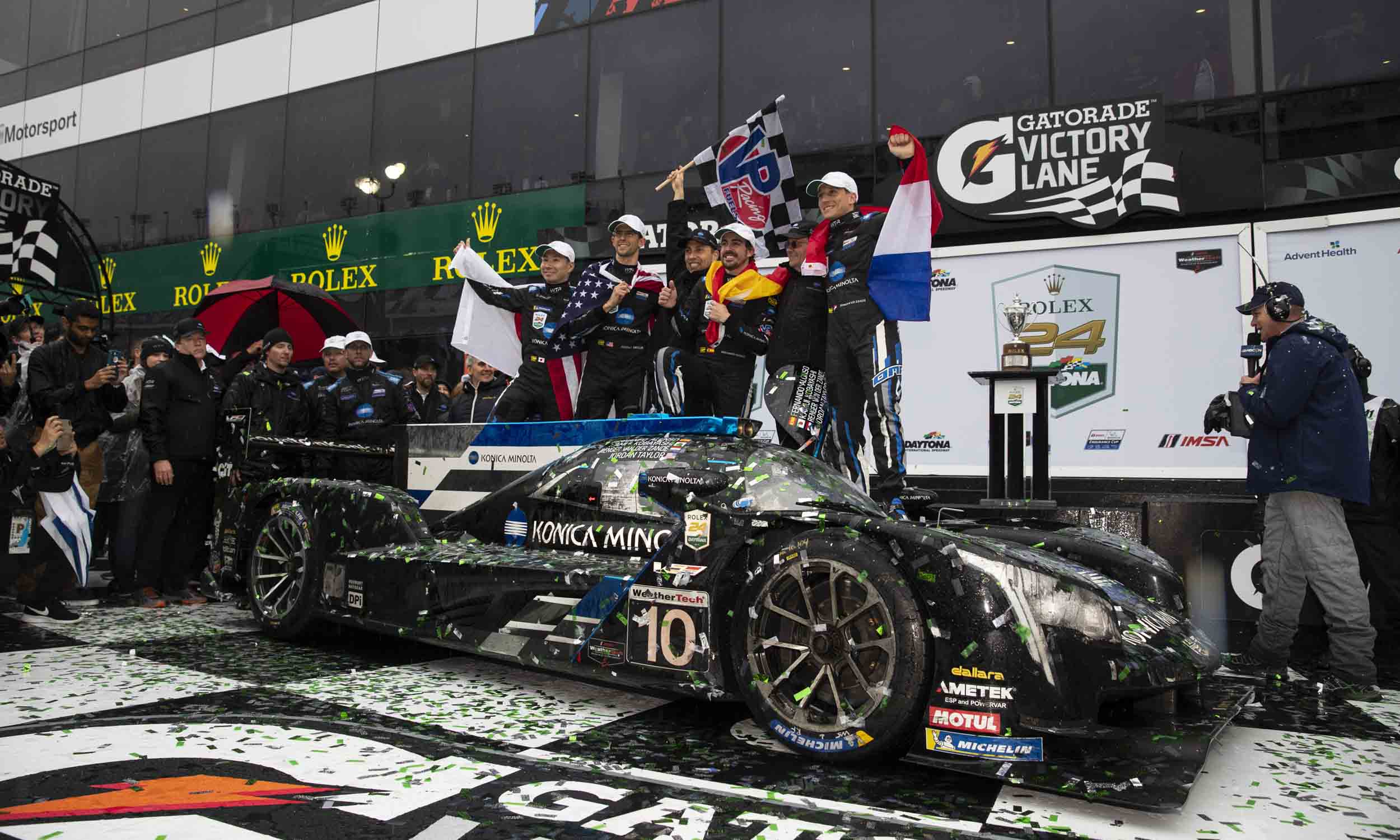 Alonso’s Victory
Two-time Formula One World Champion Fernando Alonso earned his first Rolex 24 At Daytona victory in his second start, after competing in last year’s event. With the win, Alonso becomes the third F1 champion to win the Rolex 24, along with Phil Hill and Mario Andretti. Hill, the 1961 F1 champion, won the 1964 Rolex 24 and Andretti won the 1972 Rolex 24 before becoming Formula One champion in 1978. Alonso won his two world championships in 2005 and 2006, and also took the overall win at the 2018 24 Hours of Le Mans. Alonso is scheduled to race at the Indianapolis 500 for the second time in May. 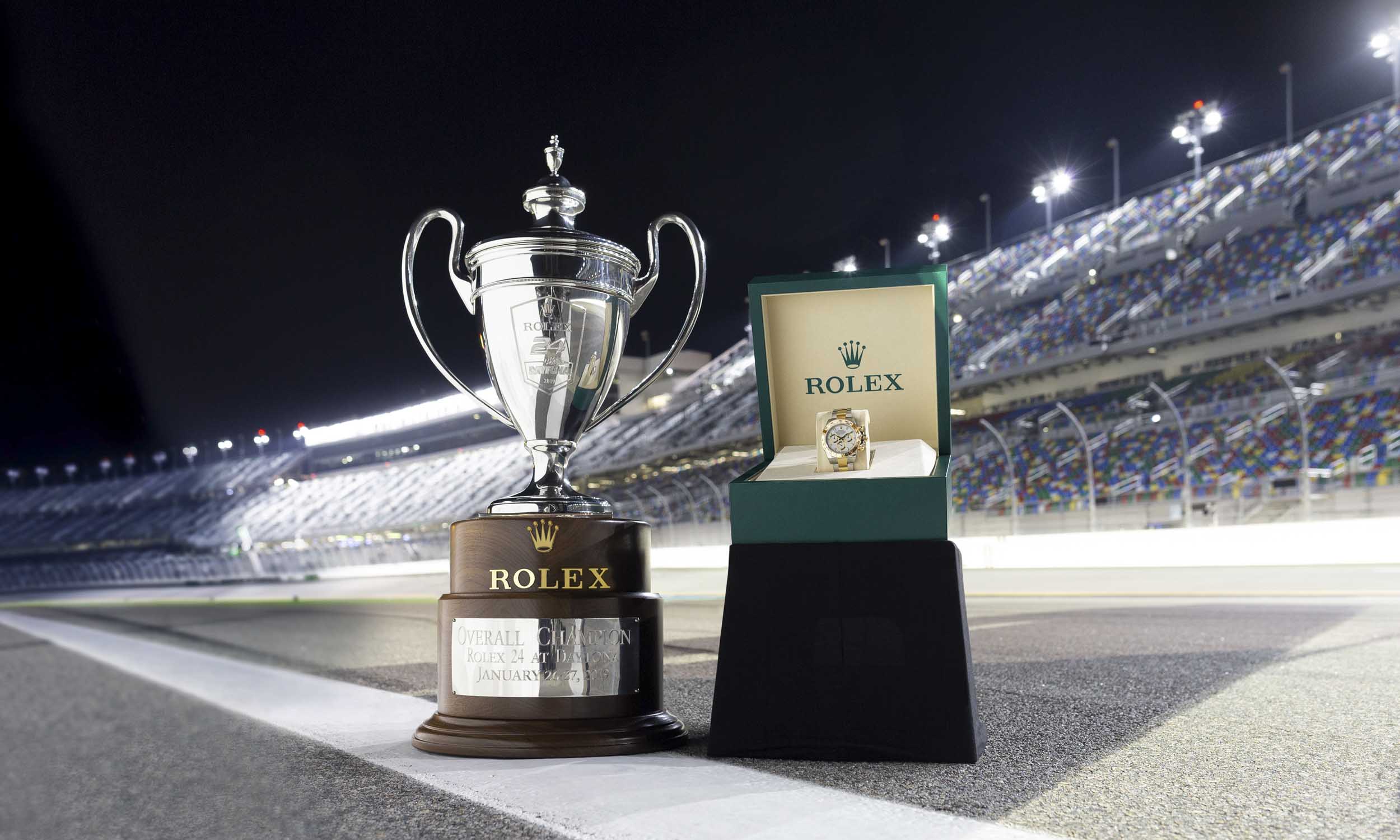 Watches for the Winners
Rolex has been the title sponsor of the Rolex 24 at Daytona since 1992, and has supported the race since 1966. A unique aspect of the event is that in addition to the winner’s trophy, the winning drivers in each of the three race classes receive specially-engraved Rolex Oyster Perpetual Cosmograph Daytona wristwatches, commemorating the Rolex 24 At Daytona victory for that year. The Rolex Daytona has become synonymous with racing, and many racing drivers strive to win the coveted watch.