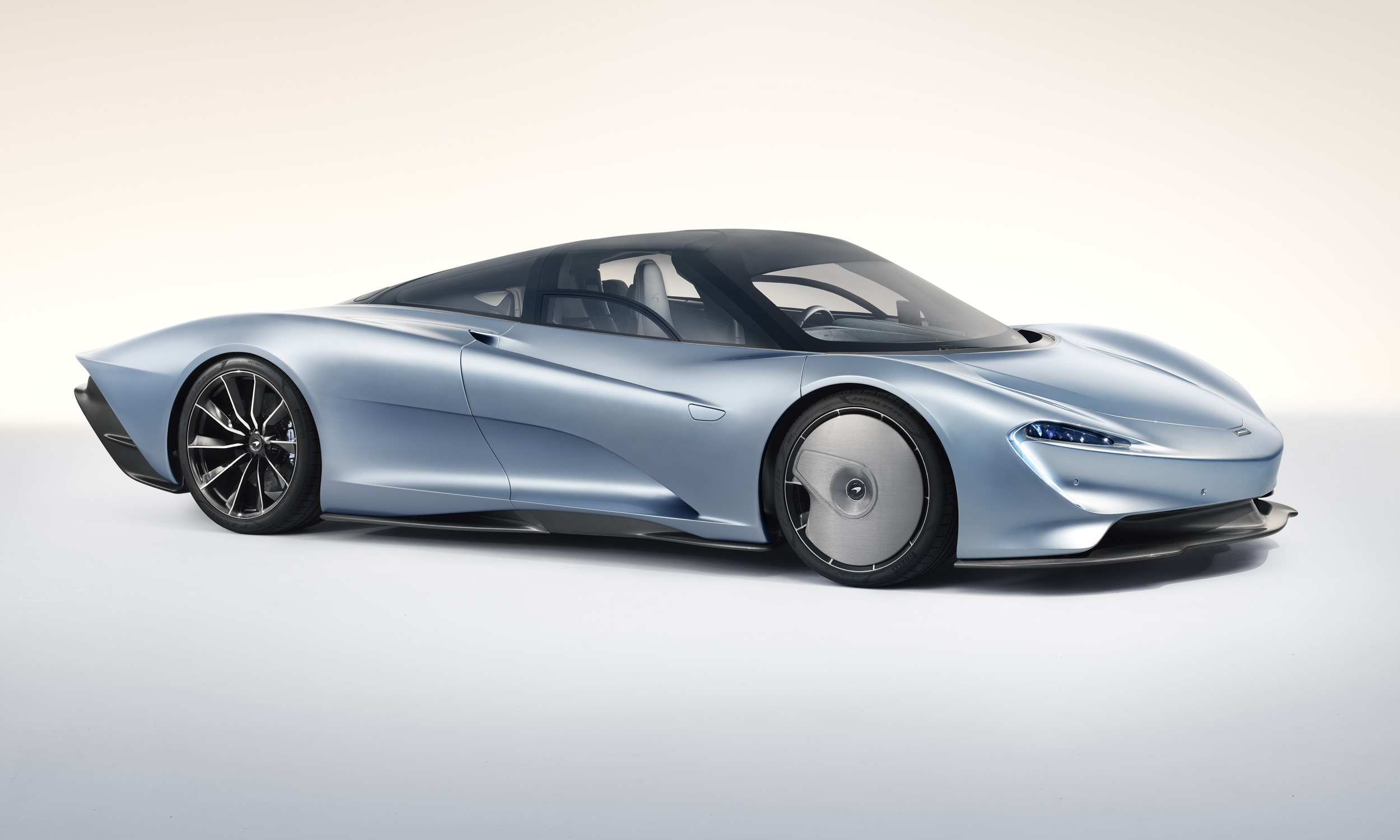 F1 Successor
In 1998 the McLaren F1 broke a 10-year-old record to become the world’s fastest production car, clocking a maximum speed of 240.14 mph. And this car that the media called “the finest driving machine yet built for the public road” became a legend. The British carmaker subsequently created some amazing sports cars, but nothing could really be considered a proper successor to that iconic F1 until now: enter the McLaren Speedtail. 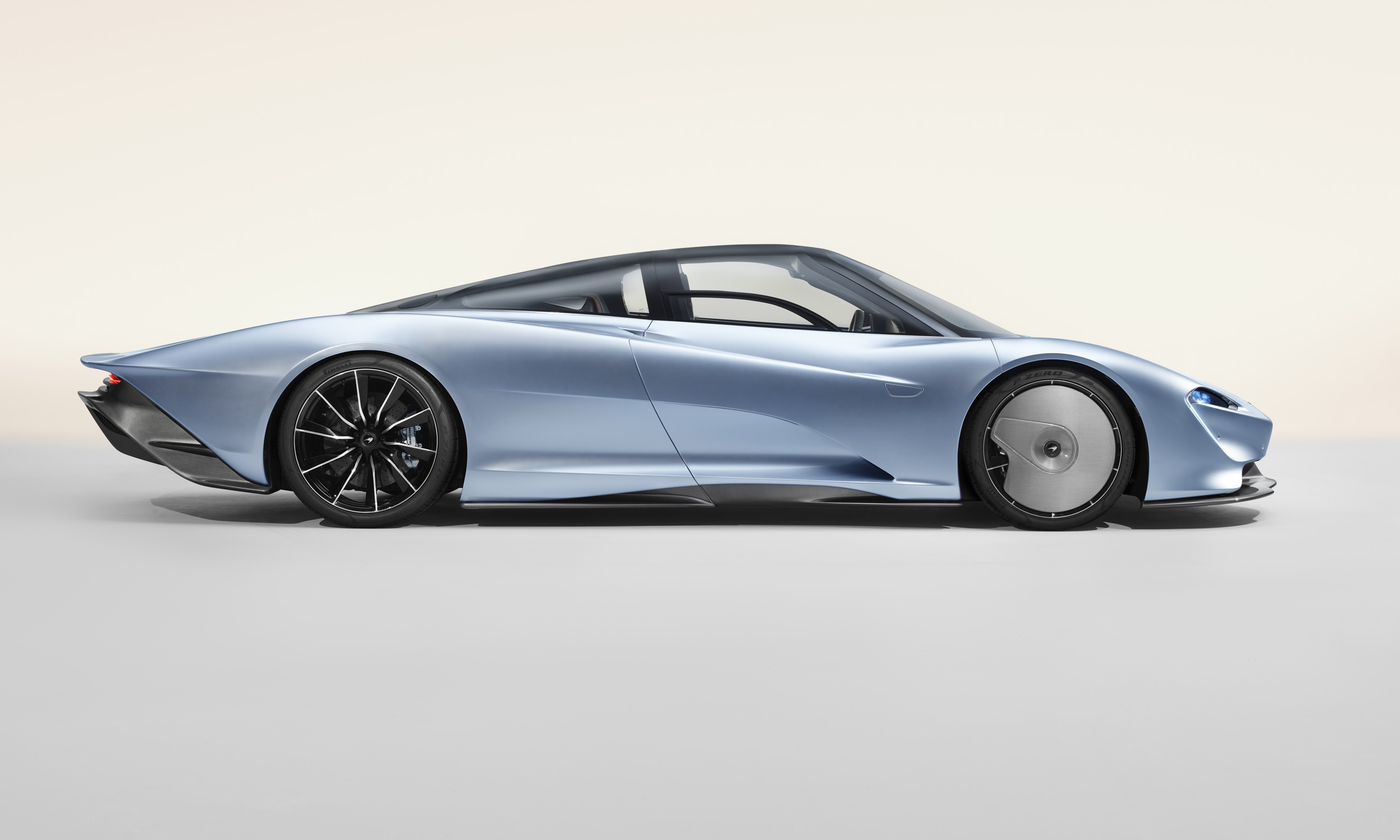 Hyper-GT
The McLaren Speedtail is the newest model in the company’s Ultimate Series. Referred to as a “Hyper-GT,” the Speedtail will be the fastest production McLaren ever, with an expected top speed of 250 mph.

Like Nothing Before
“McLaren has never built a vehicle like the Speedtail before. As our first ‘Hyper-GT’, the Speedtail is the ultimate McLaren road car; a fusion of art and science that combines an astonishing maximum speed with an iconic central-driving position and a truly pioneering approach to bespoke personalization,” said Mike Flewitt, CEO of McLaren Automotive. 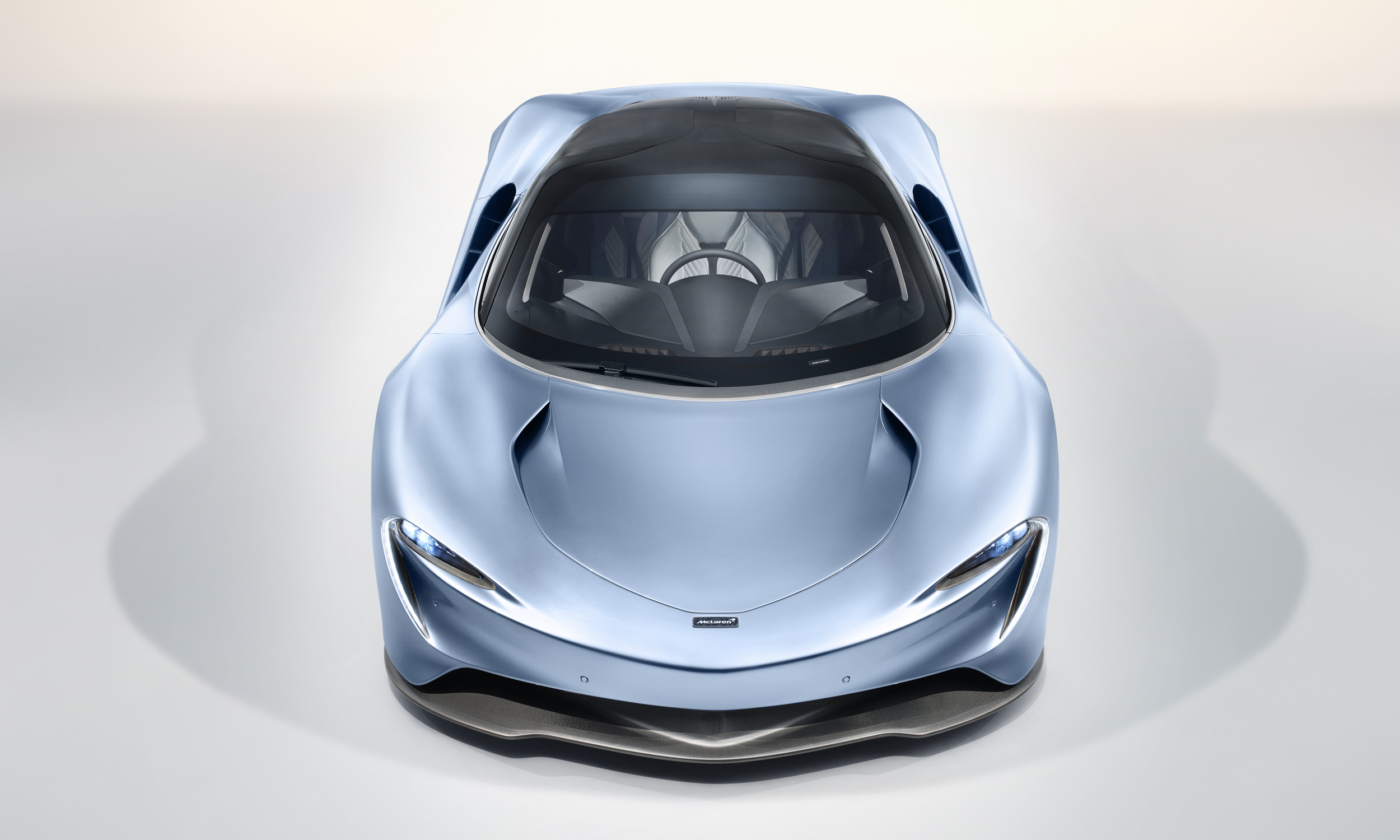 Similarities to F1
In homage to the iconic F1, the new Speedtail possesses some striking similarities. Only 106 F1s were built, so McLaren will be limiting the production of the Speedtail to the same 106 models. Most noticeable is the seating — when it debuted the F1 was pioneering in many ways, but it stood out for having the driver sitting in the center of the cockpit, flanked by two passenger seats set farther back. This same seat configuration has been carried over to the new Speedtail. 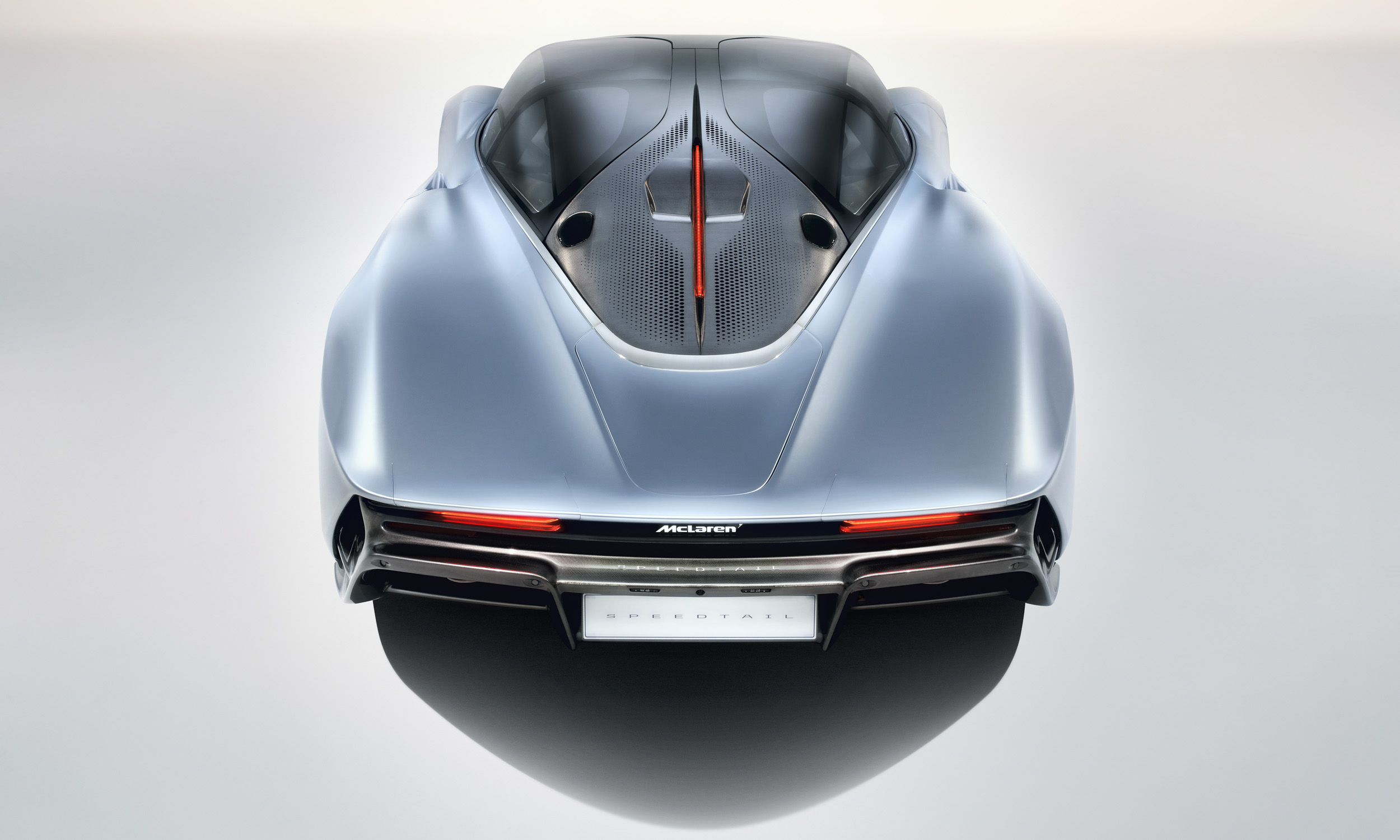 Hybrid Powertrain
The legendary F1 was powered by a normally-aspirated V12 engine (it remains the world’s fastest normally-aspirated production car), which was a technical marvel for its time; a car for the modern era, the Speedtail has gone a bit more high tech. Full details of the powertrain have not yet been released, although we do know that it will be a gas-electric hybrid system that will generate at least 1035 horsepower. 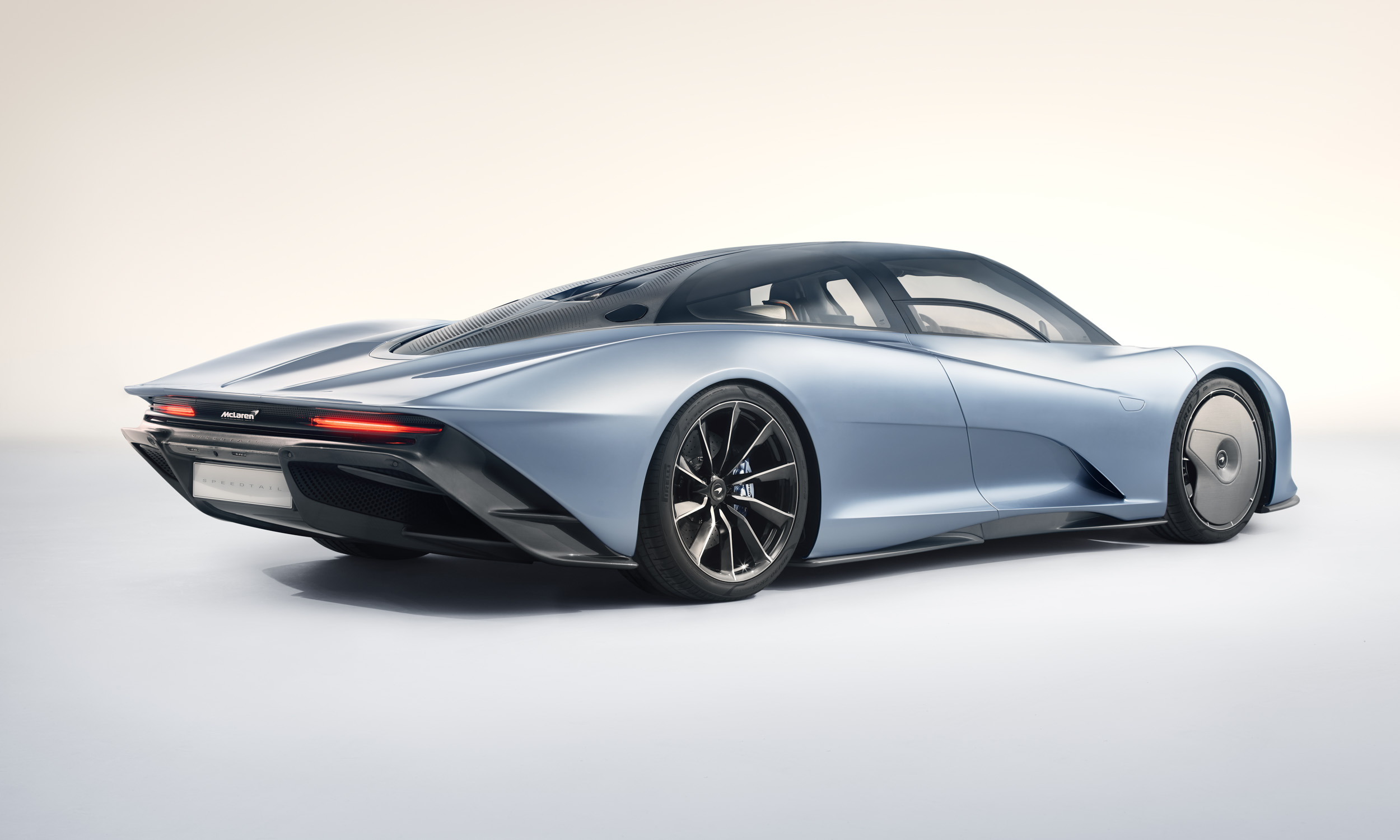 Lightweight
The Speedtail is constructed around a carbon-fiber McLaren Monocage and makes extensive use of lightweight materials throughout. This includes a body made entirely from carbon fiber, aluminum active suspension and carbon-ceramic brakes — all contributing to a low vehicle weight of 3,153 pounds. 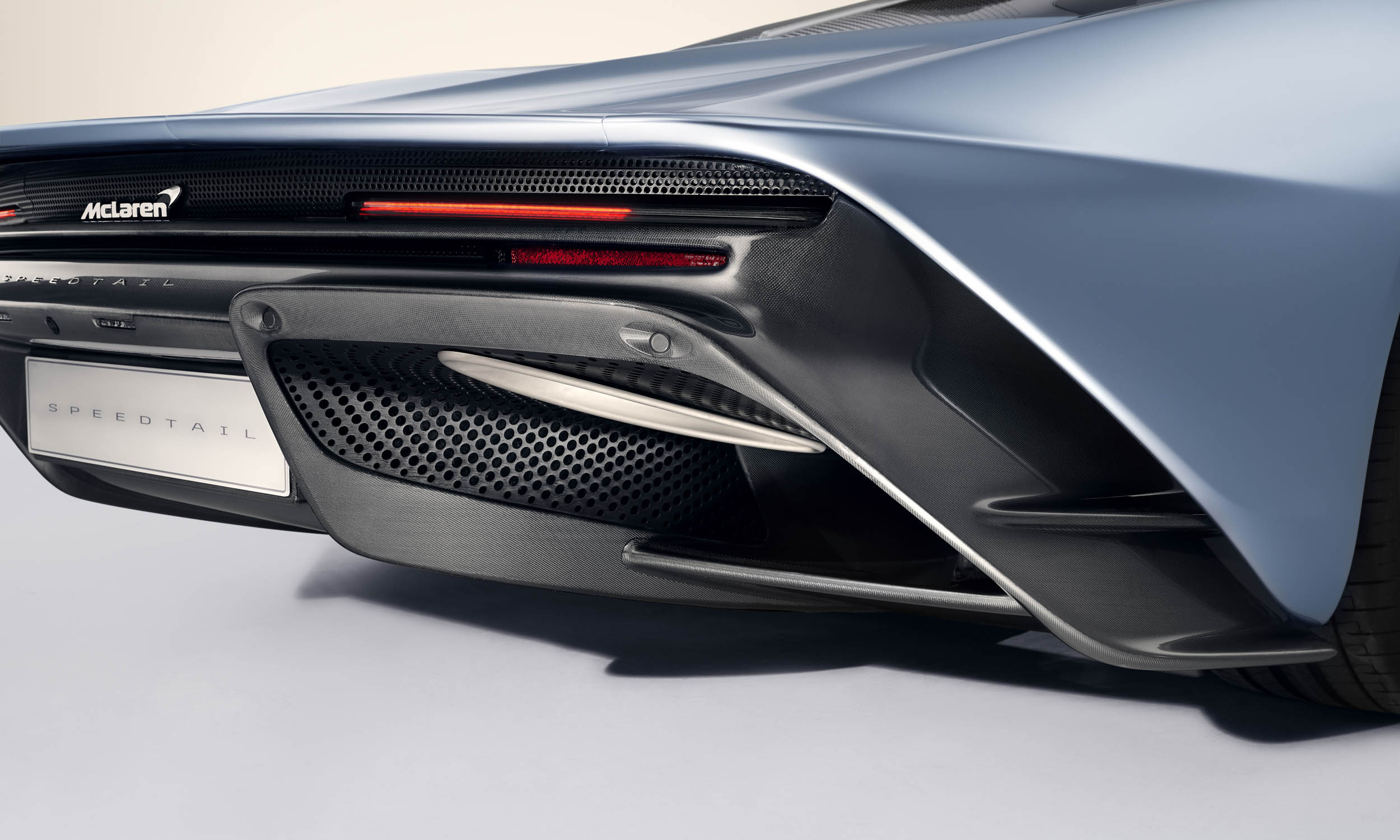 Extreme Performance
With an impressive power-to-weight ratio, the Speedtail can reach 186 mph in a mere 12.8 seconds — almost 4 seconds faster than the last Ultimate Series McLaren, the P1. We fully expect the sprint to 60 mph to be less than 3 seconds. 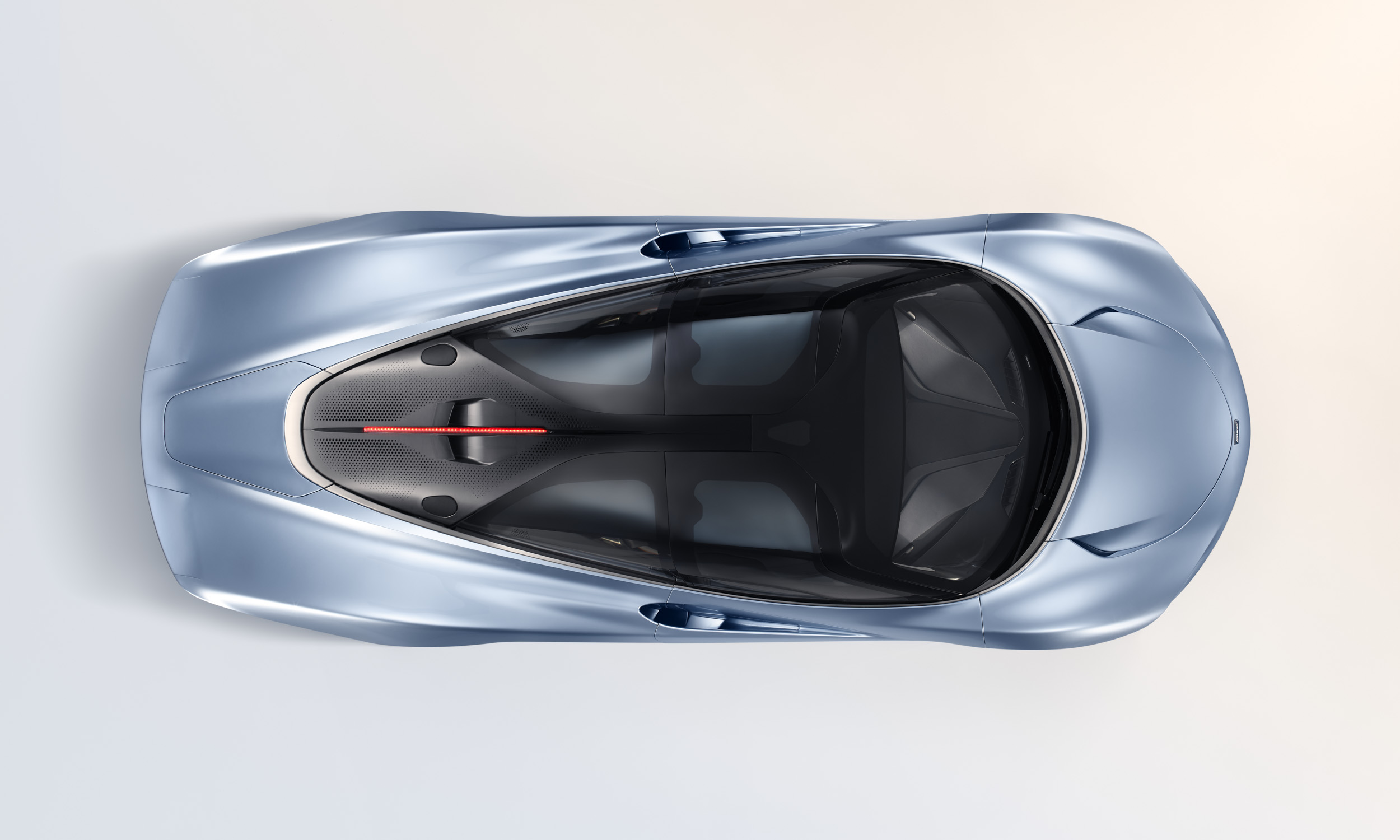 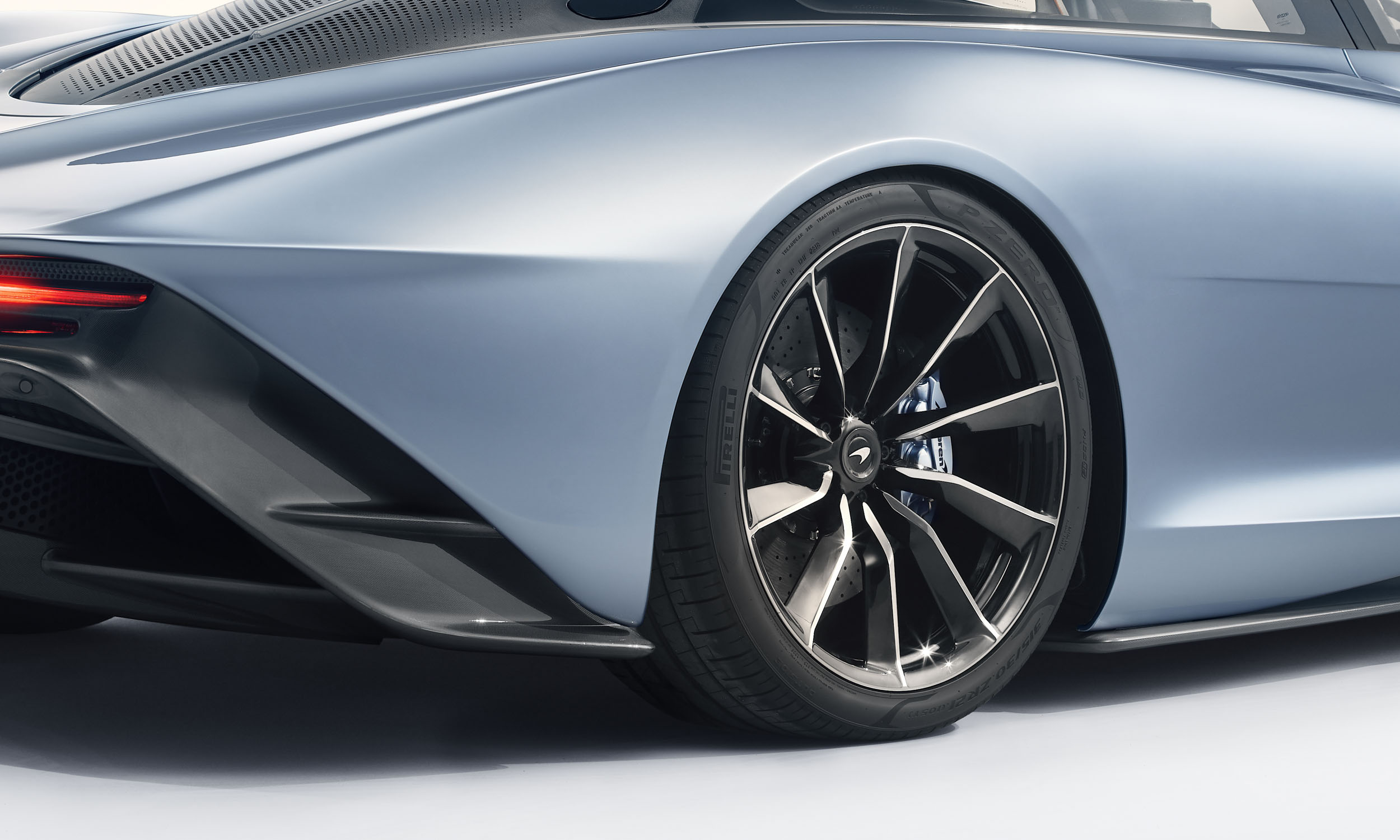 Bespoke Tires
Tires are always a concern due to heat buildup at such extreme speeds. McLaren partnered with tire constructor Pirelli to create a bespoke P-ZERO tire designed specifically for the Speedtail. 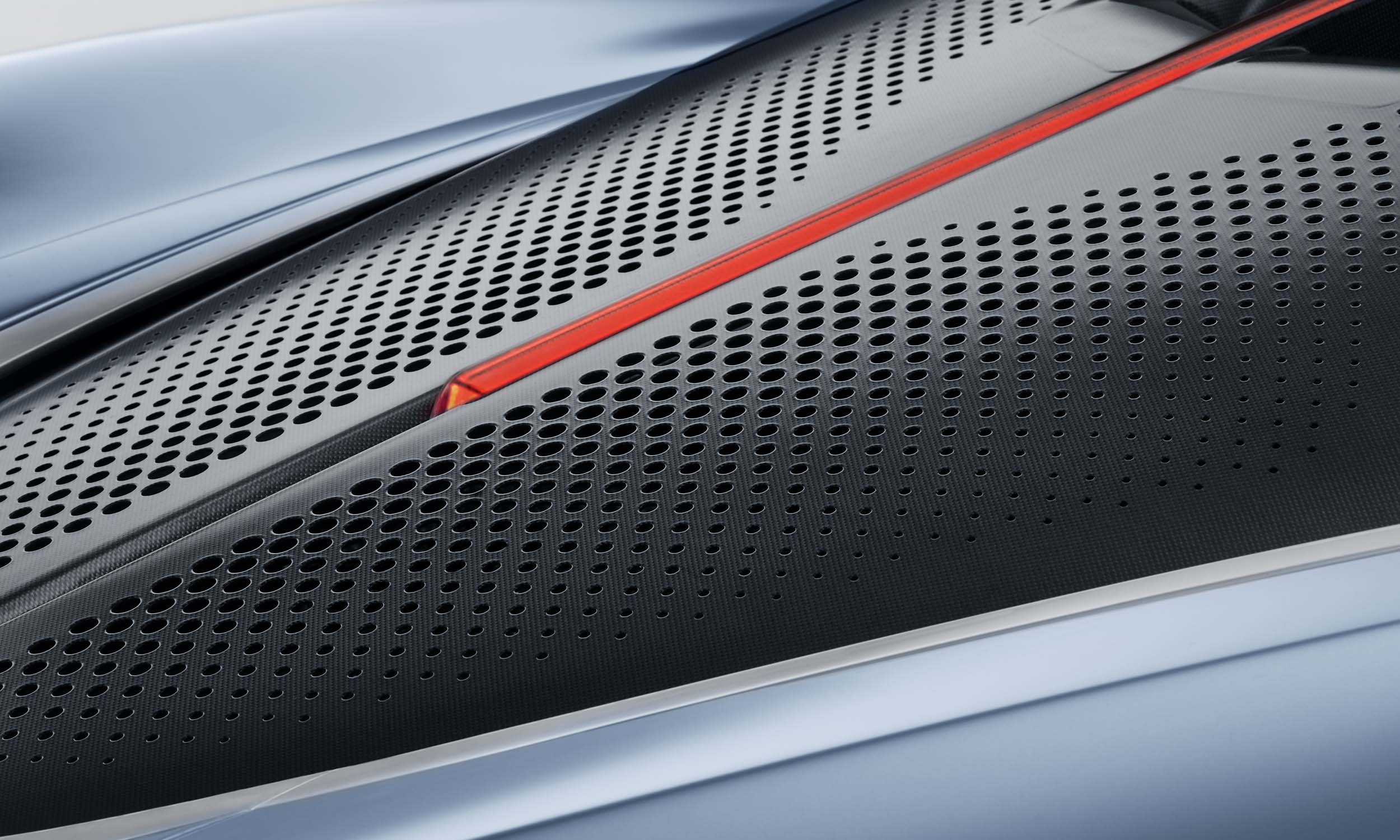 Cheating the Wind
When McLaren designers set out to create the Speedtail, their primary goals were to reduce weight, improve aerodynamics and reduce drag. The fact that the finished Speedtail looks good is simply a bonus — a case of form following function. McLaren engineers employed a number of other features and high-tech ideas to further improve the Speedtail’s ability to cheat the wind. 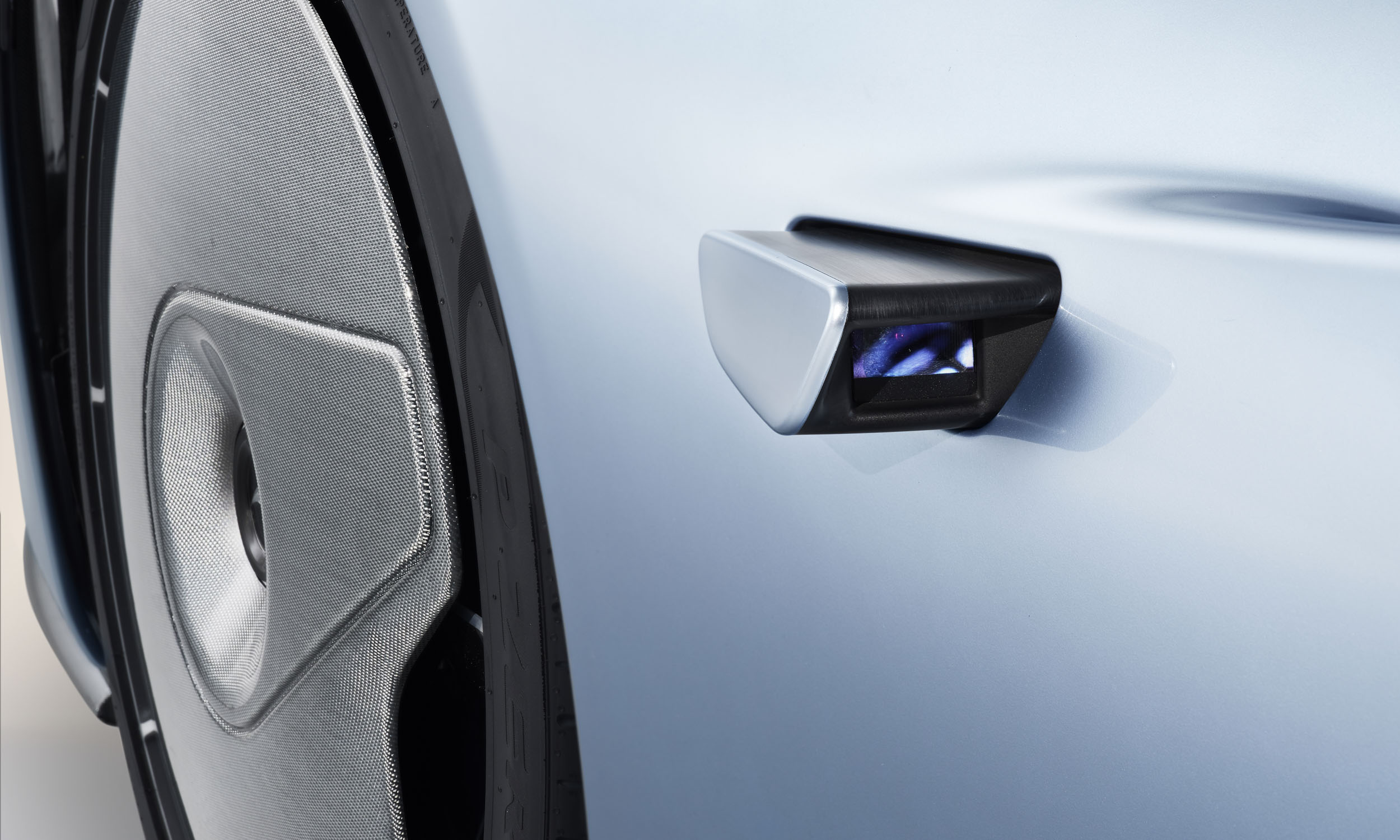 No to Mirrors, Yes to Cameras
On the new Speedtail, rearview mirrors have been supplanted by high-definition rearview cameras with displays on either side of the dashboard. The cameras offer considerably less wind resistance, and in Velocity Mode the cameras completely retract for even less drag. Let’s face it: at 250 mph, you don’t really care what’s behind you. 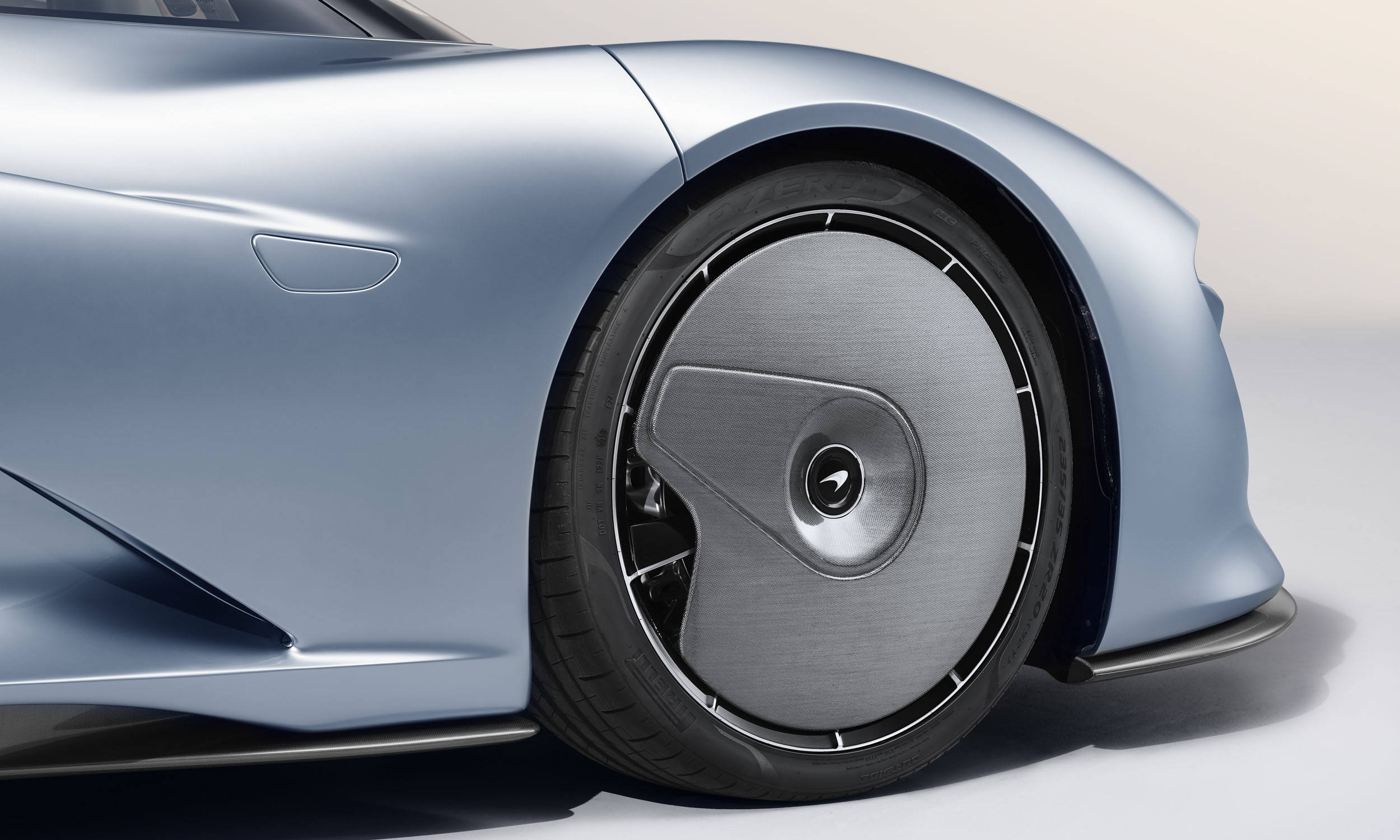 Wheel Covers
Also unique to the Speedtail are static carbon-fiber aero covers integrated with 20-inch 10-spoke forged alloy front wheels. The covers remain fixed while the wheels turn, providing a flat surface that smooths airflow, reduces turbulence commonly found around wheels, and directs air backward to the door blades on the edge of the dihedral doors. 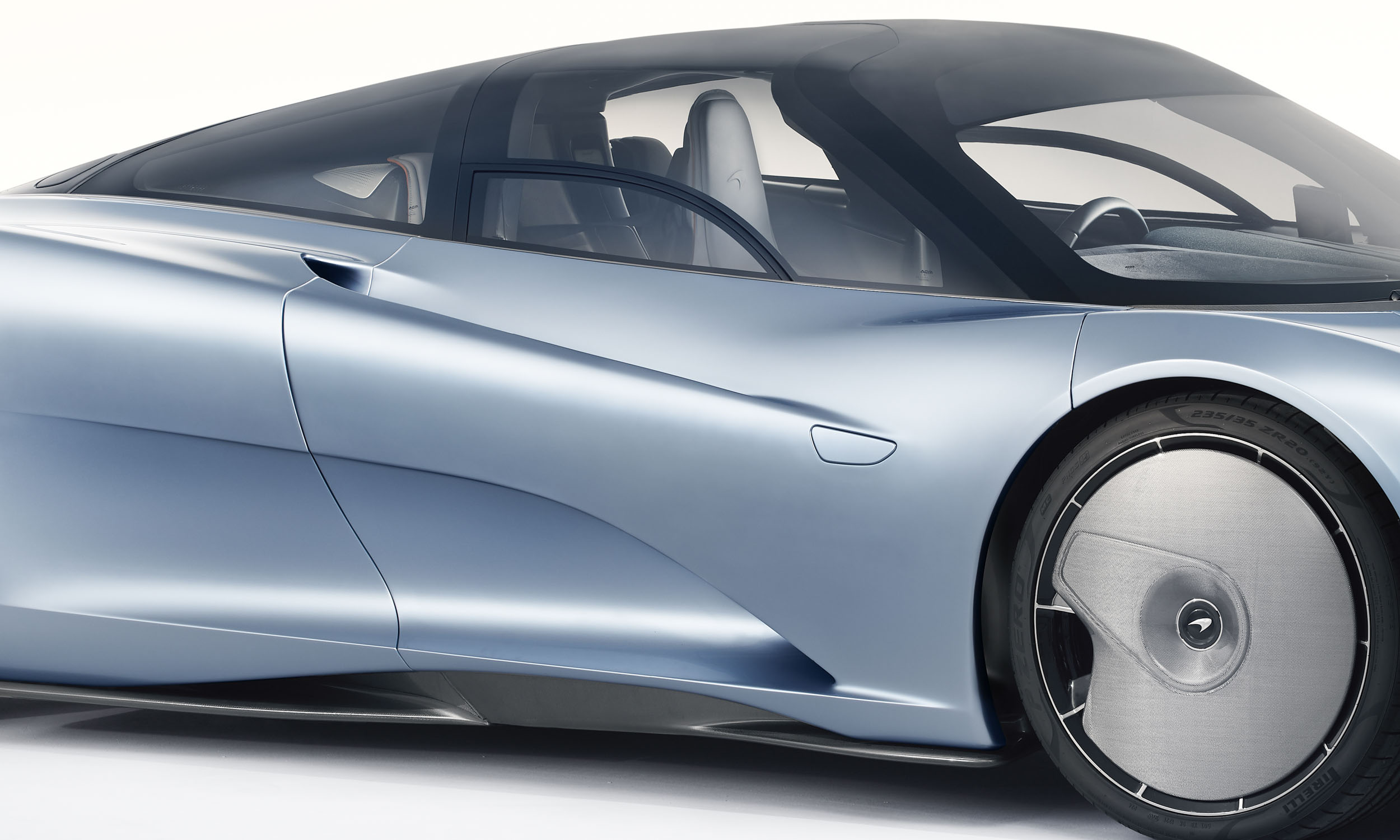 Dihedral Doors
Similar to other McLaren road cars, access to the Speedtail’s cabin is via dihedral doors, which are power operated for easy entry and exit. 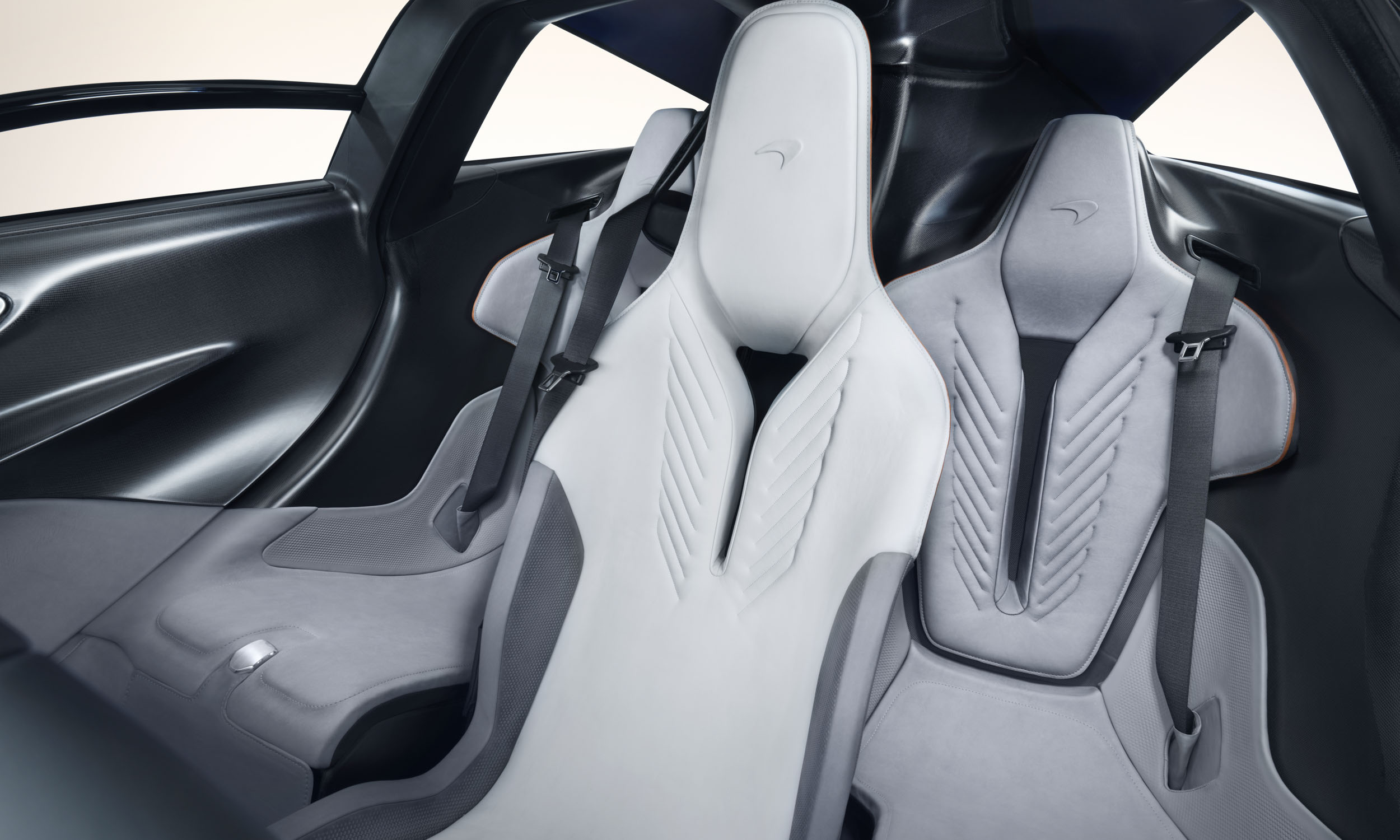 Light or Dark Cabin
The McLaren Speedtail’s large windscreen curves up and over the cabin to become part of the roof with a porthole above the driver’s head. Glass rear quarter windows stretch back behind the seats, almost to the rear axle. This allows a lot of light into the cabin; however, the glass is electrochromic and can be turned opaque instantly. The top of the windshield is also electrochromic, eliminating the need for sun visors. 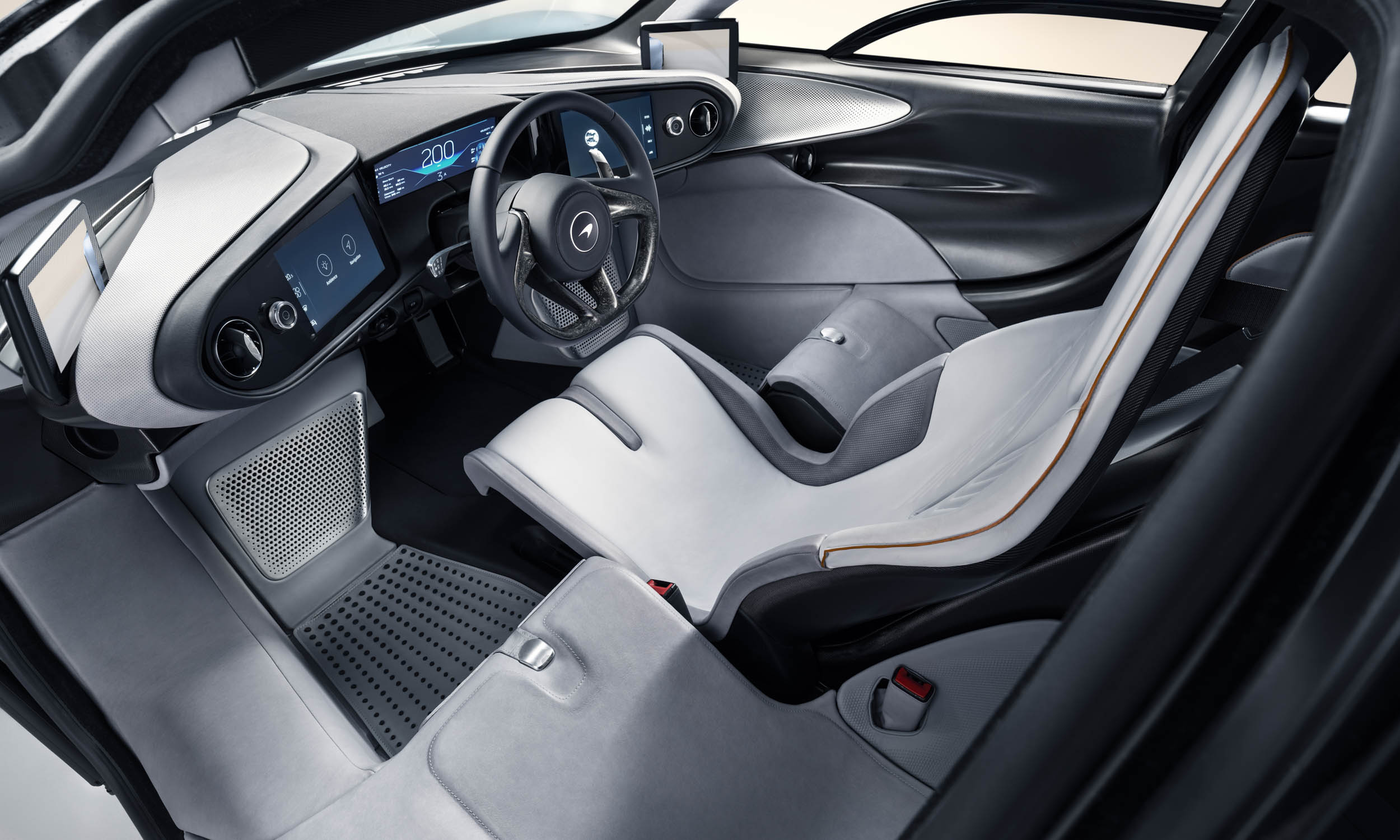 Luxury Interior
“The McLaren Speedtail is a vehicle unlike any other, not simply because of the astonishing visual drama, extreme speed and aerodynamic excellence that distinguish it, but because it sets
unprecedented standards in technical luxury and bespoke customization,” said Rob Melville, design director of McLaren Automotive. “The same boundless innovation and creativity that drives McLaren to push the limits of physical performance have challenged us to craft an exquisite interior defined by pioneering design and the absolute pinnacle of materials quality,” Melville noted. 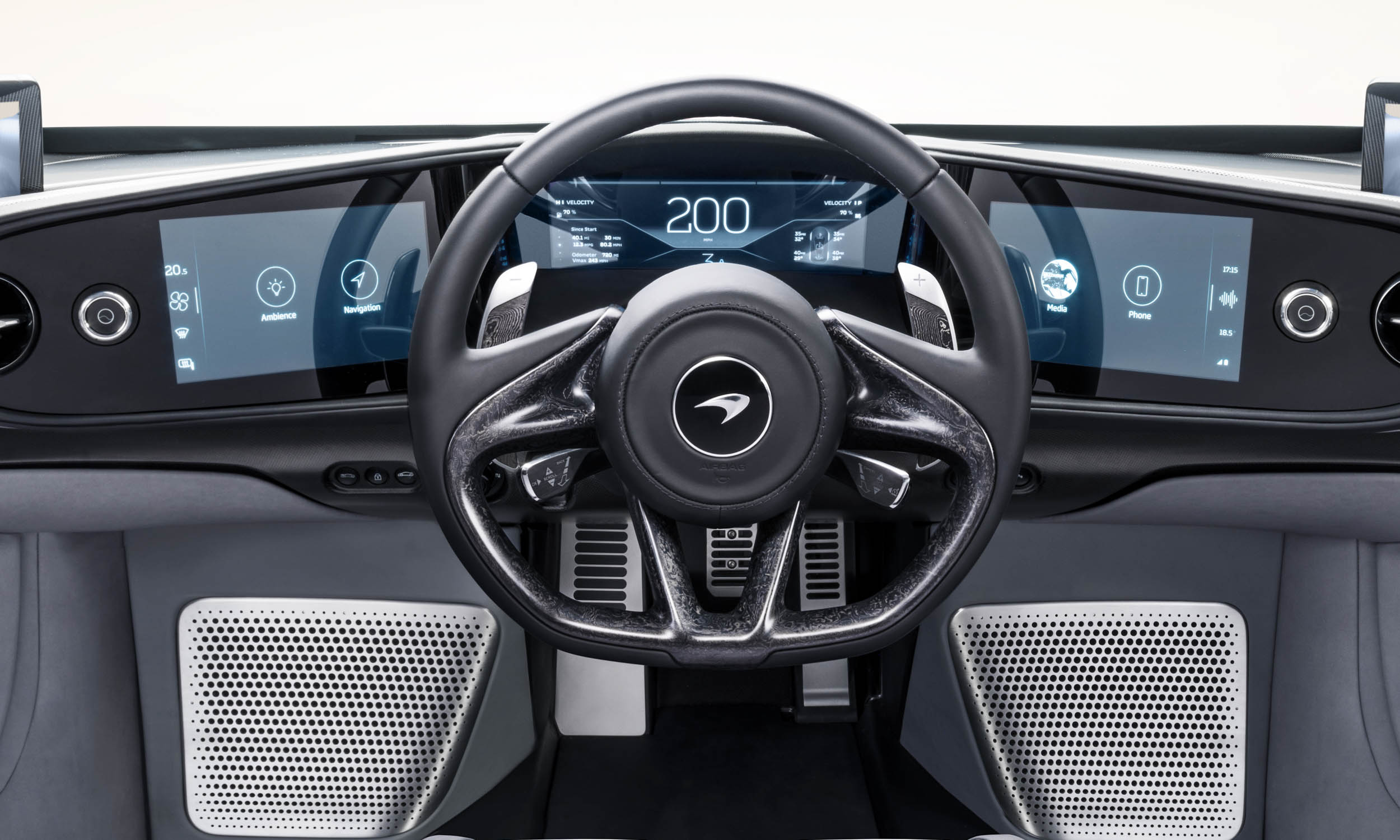 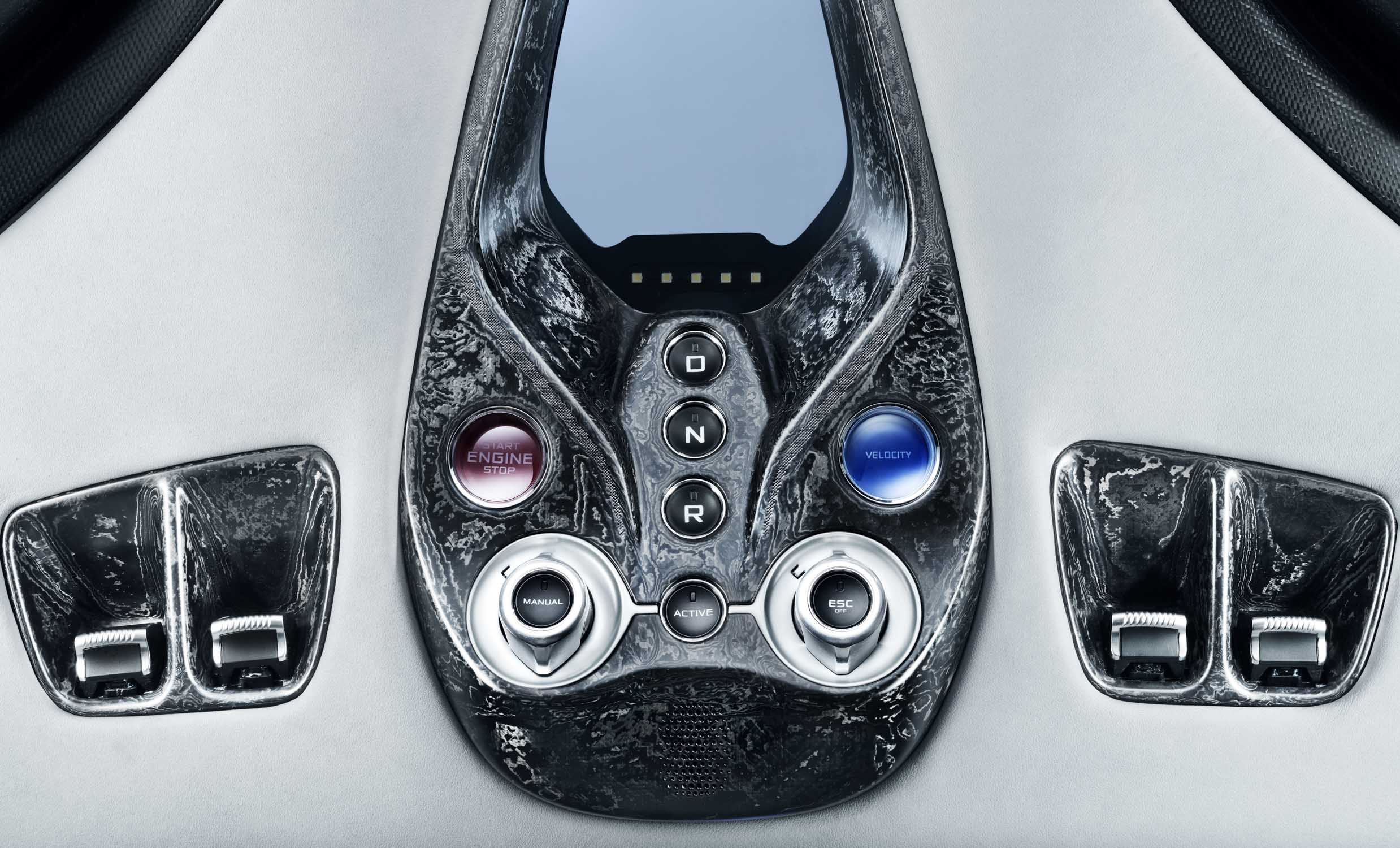 Engine Start
Controls to start the engine are in a panel above the driver’s head, as are the switches for windows and doors. The switches are hand-brushed and polished aluminum.

Special Leather Trim
The Speedtail is a true GT car — it may be built for extreme speed, but that doesn’t mean the driver and passengers shouldn’t enjoy the utmost in luxurious materials and features. The centrally-located driver’s seat gets trimmed in a new semi-aniline lightweight leather designed for the Speedtail by famed leather company Bridge of Weir. This special leather can be treated to be resilient enough to cover the floor. The leather extends as a continuous piece to trim the storage compartments located beneath the seats. 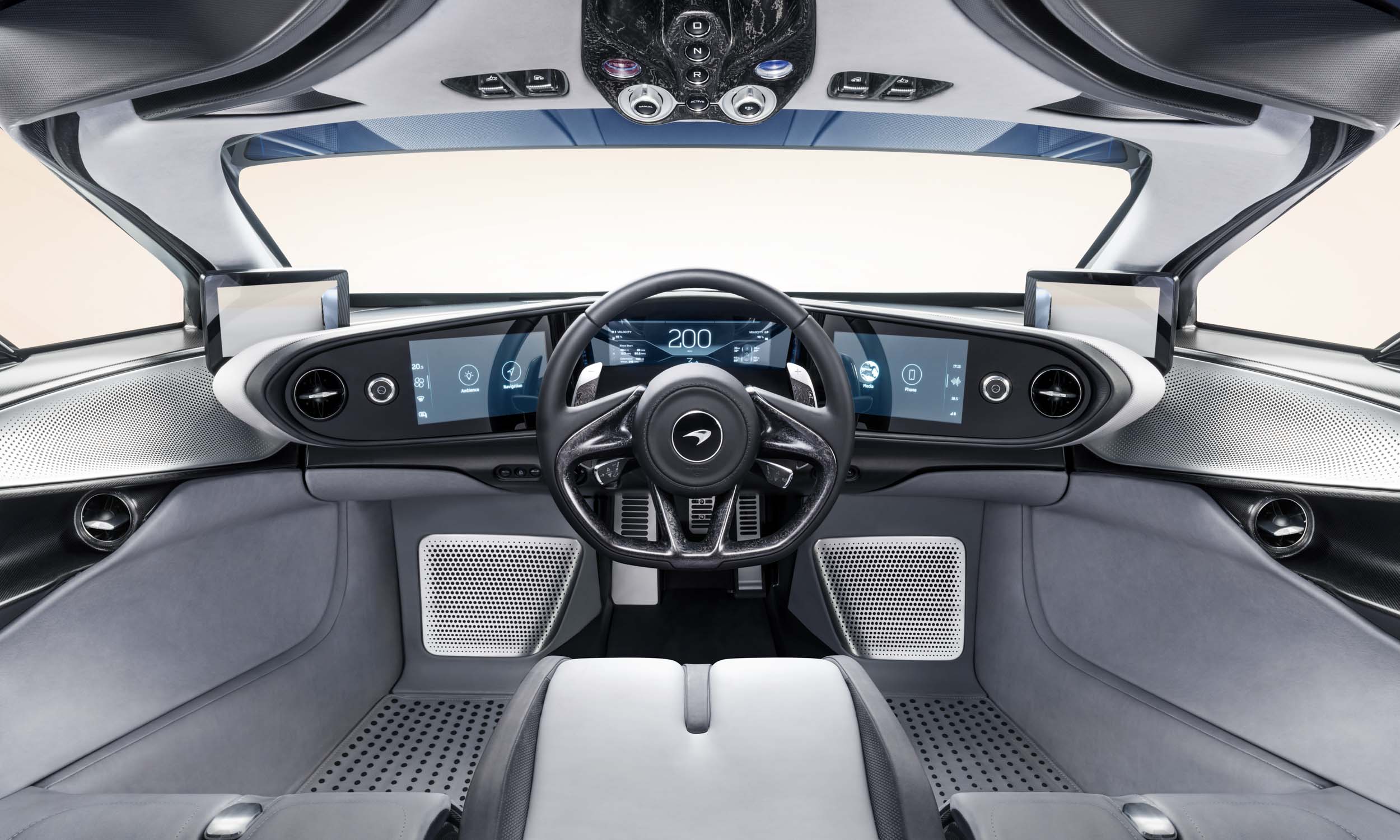 Personalized
The dashboard and passenger seats are covered in a full-aniline leather sourced from specially-selected Scandinavian hides. Owners can choose unique stitch patterns in any color, and different designs can be created within the leather via quilting or embossing. Given the limited number of Speedtails to be produced and the level of personalization available, it is unlikely that two Speedtails will look alike. 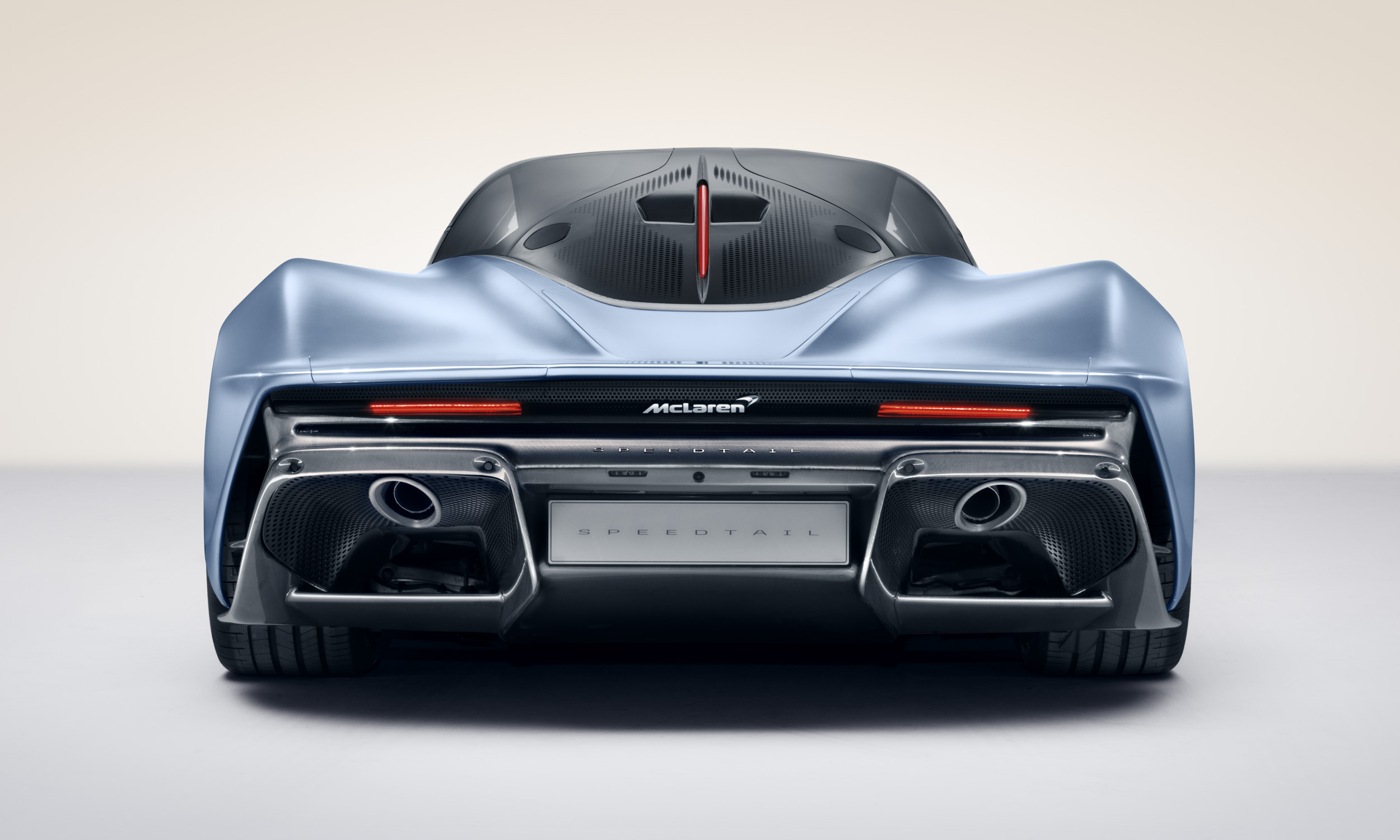 Sold Out
The McLaren Speedtail will have a starting price £1.75 million (US$2.25 million), and all 106 have already been sold. Deliveries of this new extreme-performance supercar are expected to start in early 2020.