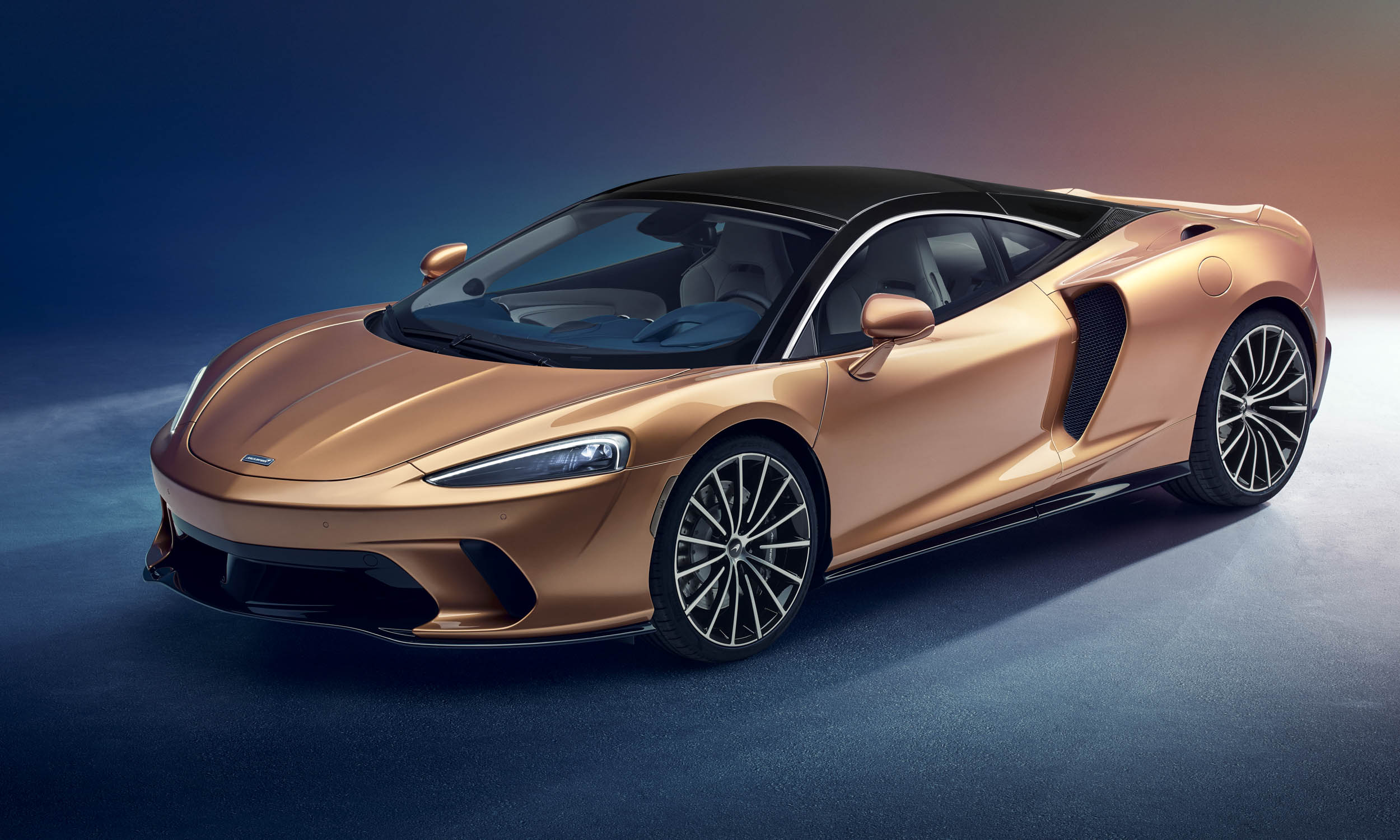 © McLaren
All New
Introducing brand-new models on a fairly regular basis is not a common characteristic among boutique makers of exclusive, exotic automobiles; however, McLaren Automotive seems to be the uncommon exception to this rule. After hinting at an impending new vehicle during press preview days at the 2019 Geneva Motor Show in early March, today the British automaker took the wraps off its latest model, the McLaren GT. Not only is this a new model for the company, the GT represents a new series of vehicles, taking its place alongside the Sports (570S), Super (720S) and Ultimate (Senna, Speedtail) model series. 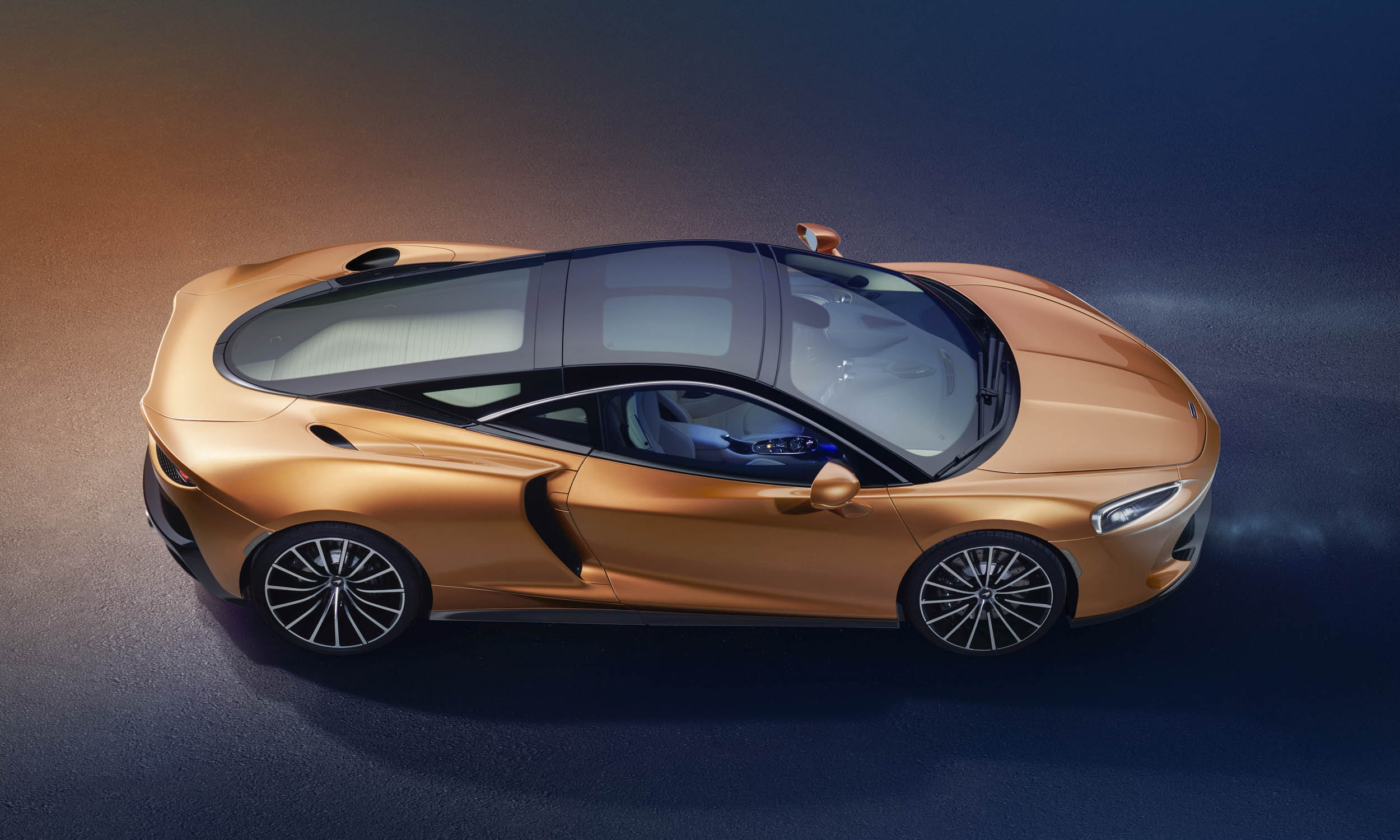 © McLaren
Not a Typical GT
A grand tourer is typically a large, heavy, high-performance cruiser designed for comfort while covering long distances — often at high speeds. Since building something heavy is not exactly part of McLaren’s culture, the company’s take on a GT is nothing short of exceptional. Like all McLarens, the new GT features a carbon fiber structure that boasts exceptional strength and rigidity, while achieving excellent driving dynamics and remaining the lightest in its class. Weighing in at a mere 3,232 pounds, the GT is reportedly 286 pounds lighter than its closest competitor. 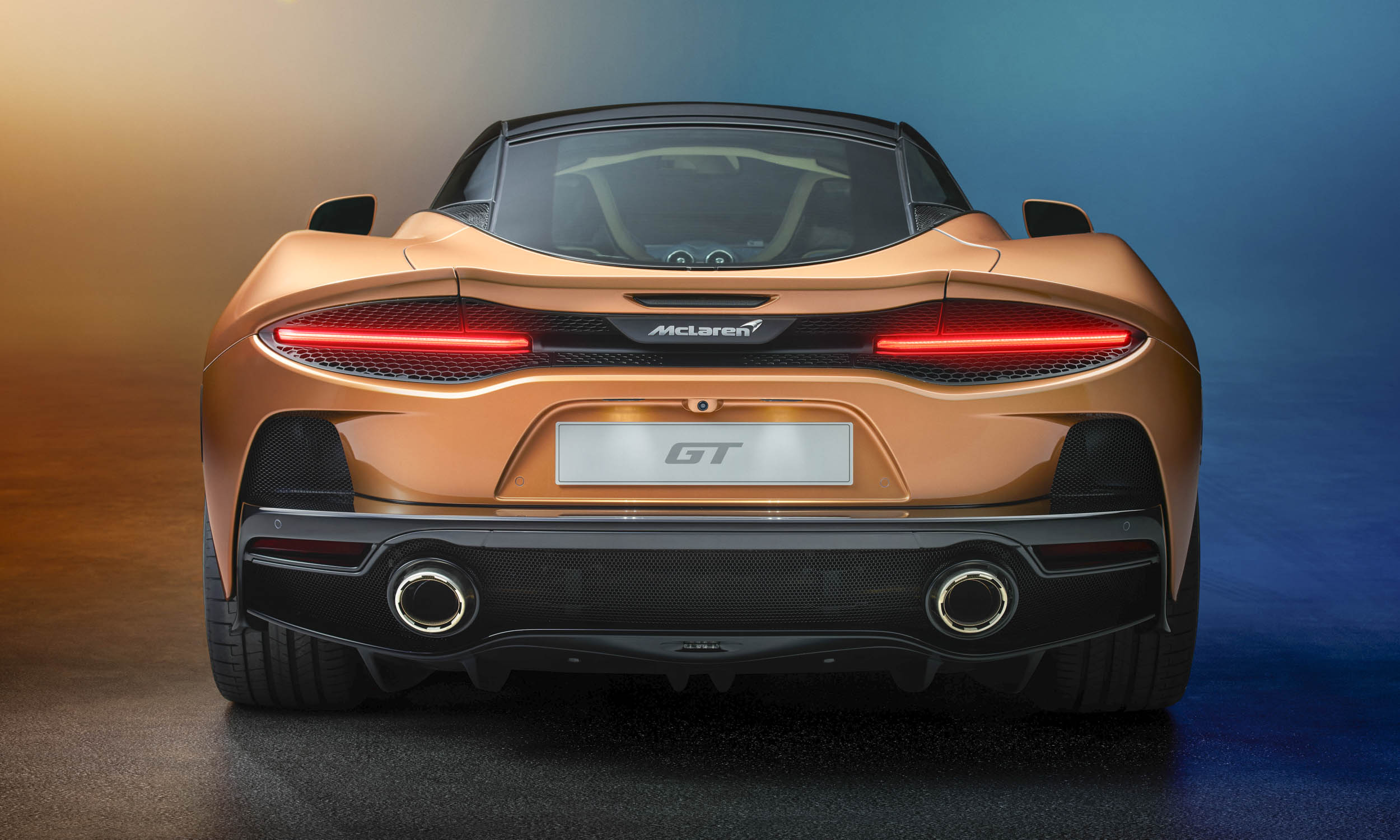 © McLaren
Powerful V8
That said, light weight is only part of the formula for ultimate performance; an absence of mass needs to be accompanied by plenty of power — never a problem for McLaren. The GT gets a 4.0-liter twin-turbo V8 engine producing a plentiful 612 horsepower and 465 lb-ft of torque. Positioned behind the cabin, the powerful V8 gets paired with a 7-speed automatic transmission that can be set to Comfort, Sport or Track mode. 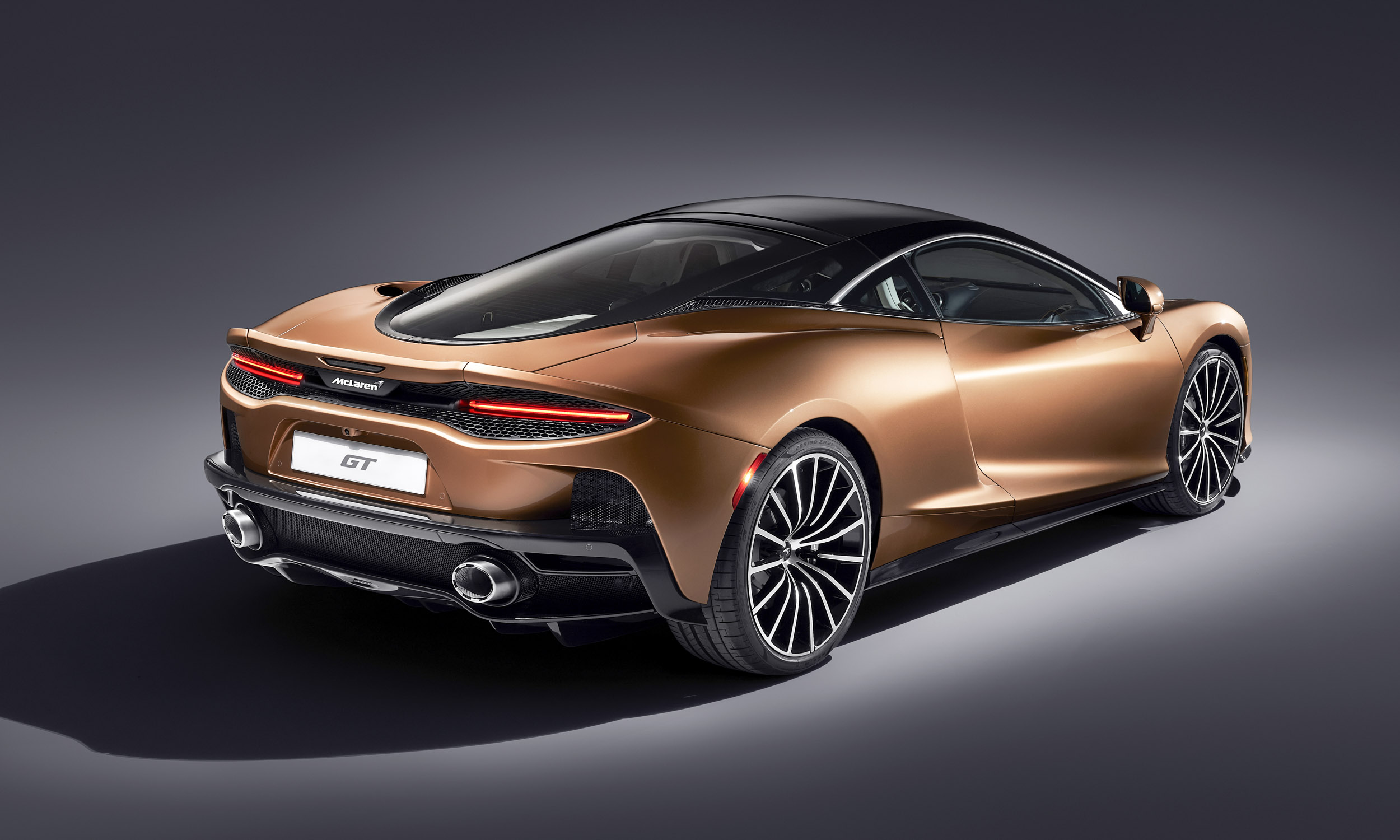 © McLaren
Agile Tourer
“The new McLaren GT combines competition levels of performance with continent-crossing capability, wrapped in a beautiful body and true to McLaren’s ethos of designing superlight cars with a clear weight advantage over rivals,” said Mike Flewitt, CEO of McLaren Automotive. “Designed for distance, it provides the comfort and space expected of a Grand Tourer, but with a level of agility never experienced before in this segment. In short, this is a car that redefines the notion of a Grand Tourer in a way that only a McLaren could,” Flewitt noted. 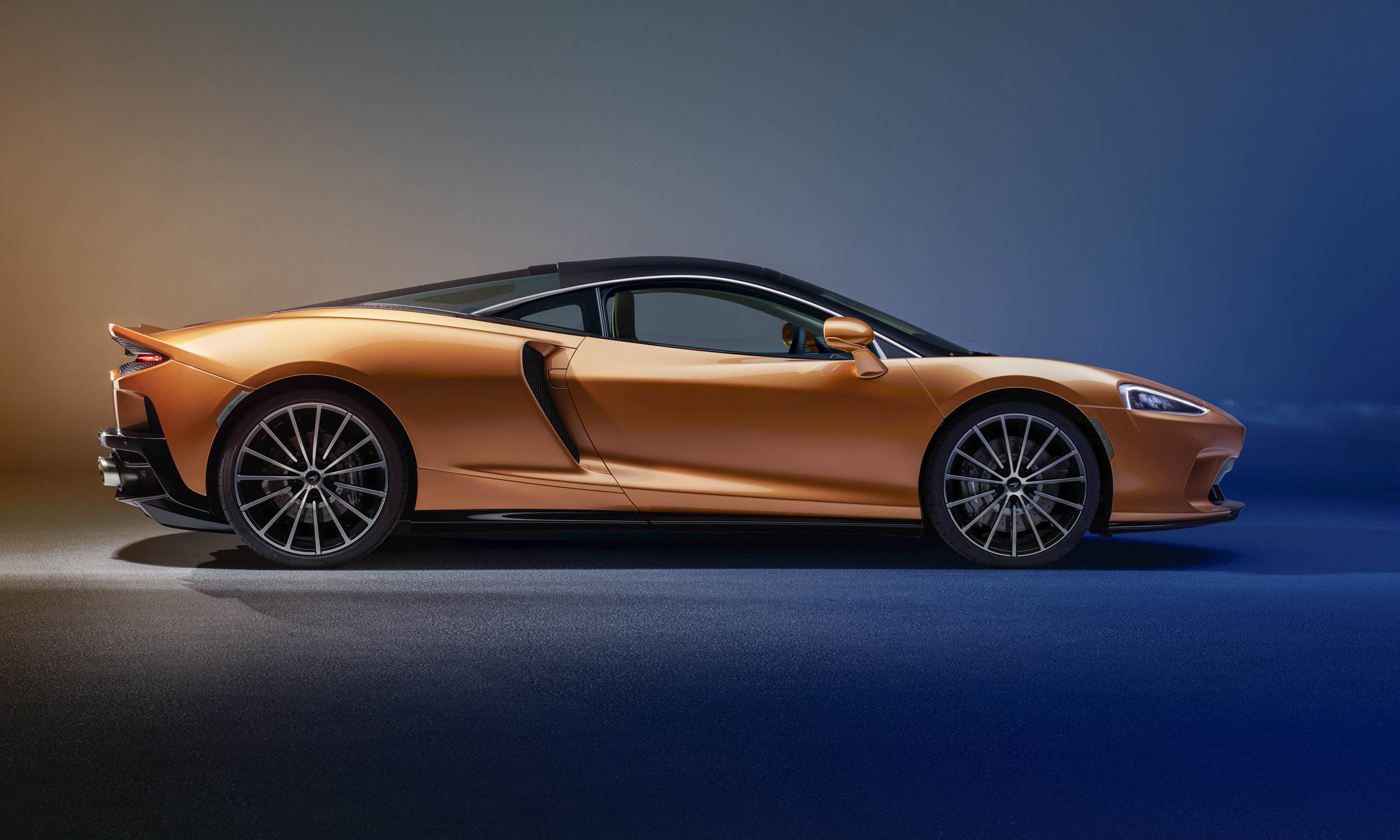 © McLaren
Impressive Stats
The GT may be designed for long-distance touring, yet it achieves the stats of an exotic sports cars. McLaren says this new model is able to reach 60 mph in 3.1 seconds, 124 mph in 9.0 seconds and — with enough running room — will top out at 203 mph. Deceleration numbers are also excellent: the GT can come to a complete standstill from 62 mph in 105 feet. Equally as impressive: the estimated highway fuel economy is rated at 21 mpg, which would give the GT a range of almost 400 miles between fill-ups — perfect for that long road trip. 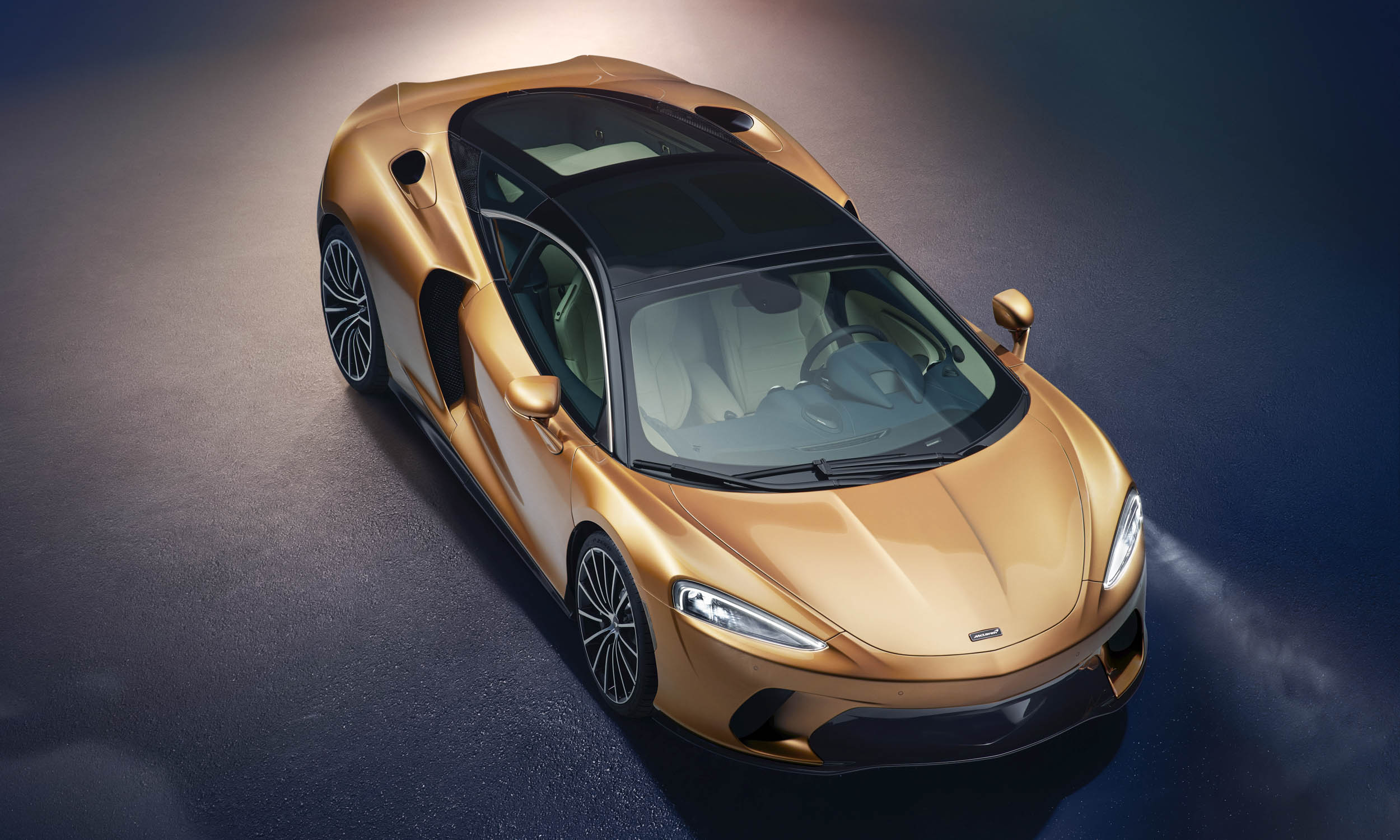 © McLaren
Comfortable Ride
McLaren engineers designed the GT to offer handling like a sports car should, while still providing a comfortable ride. Making this possible is a lightweight aluminum double wishbone design suspension teamed with hydraulic dampers for McLaren’s Proactive Damping Control. Reappropriating software originally developed for the 720S, the system takes input from sensors and adjusts to road conditions in 2 milliseconds — not only smoothing the ride for improved comfort, but also optimizing grip for better handling. The dampers also adjust based on the chosen active handling mode of Comfort, Sport or Track. 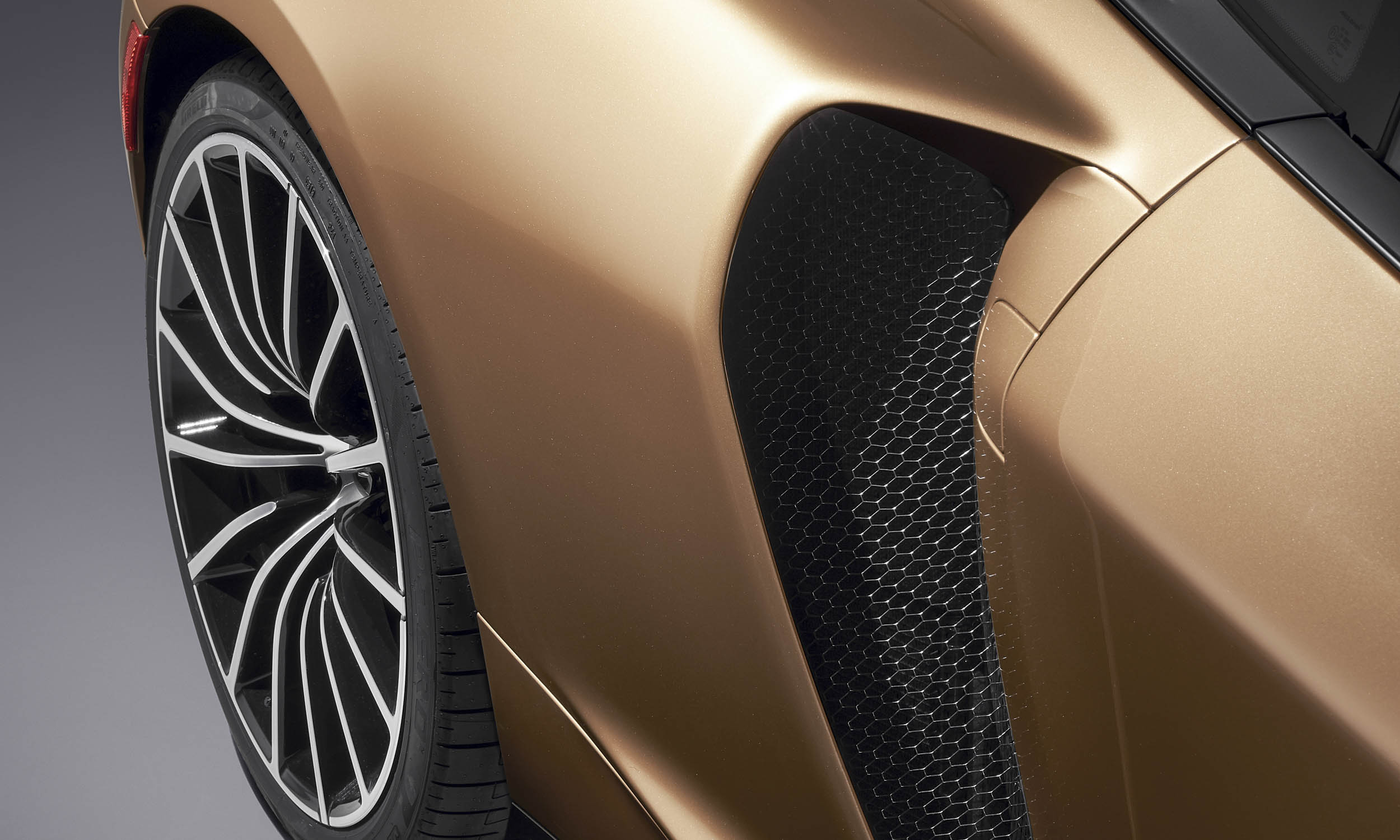 © McLaren
Bespoke Tires
Working with its tire partner Pirelli, McLaren developed bespoke rubber specifically for the GT. The Pirelli P ZERO tires handle high-performance driving while still providing a comfortable ride. The GT’s exclusive P ZEROs are fitted to 21-inch alloy wheels at the rear — the largest ever on a McLaren — with 20-inch wheels up front. 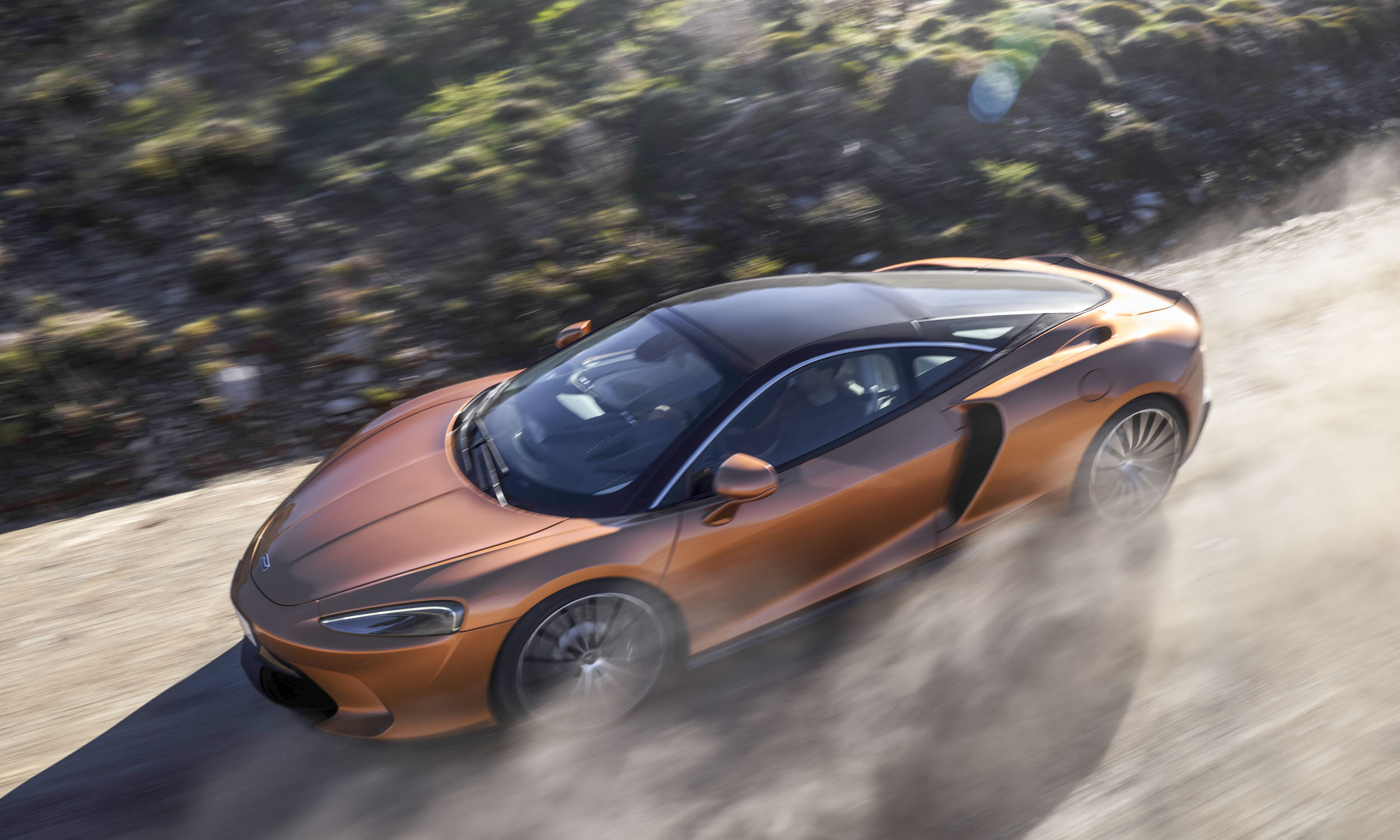 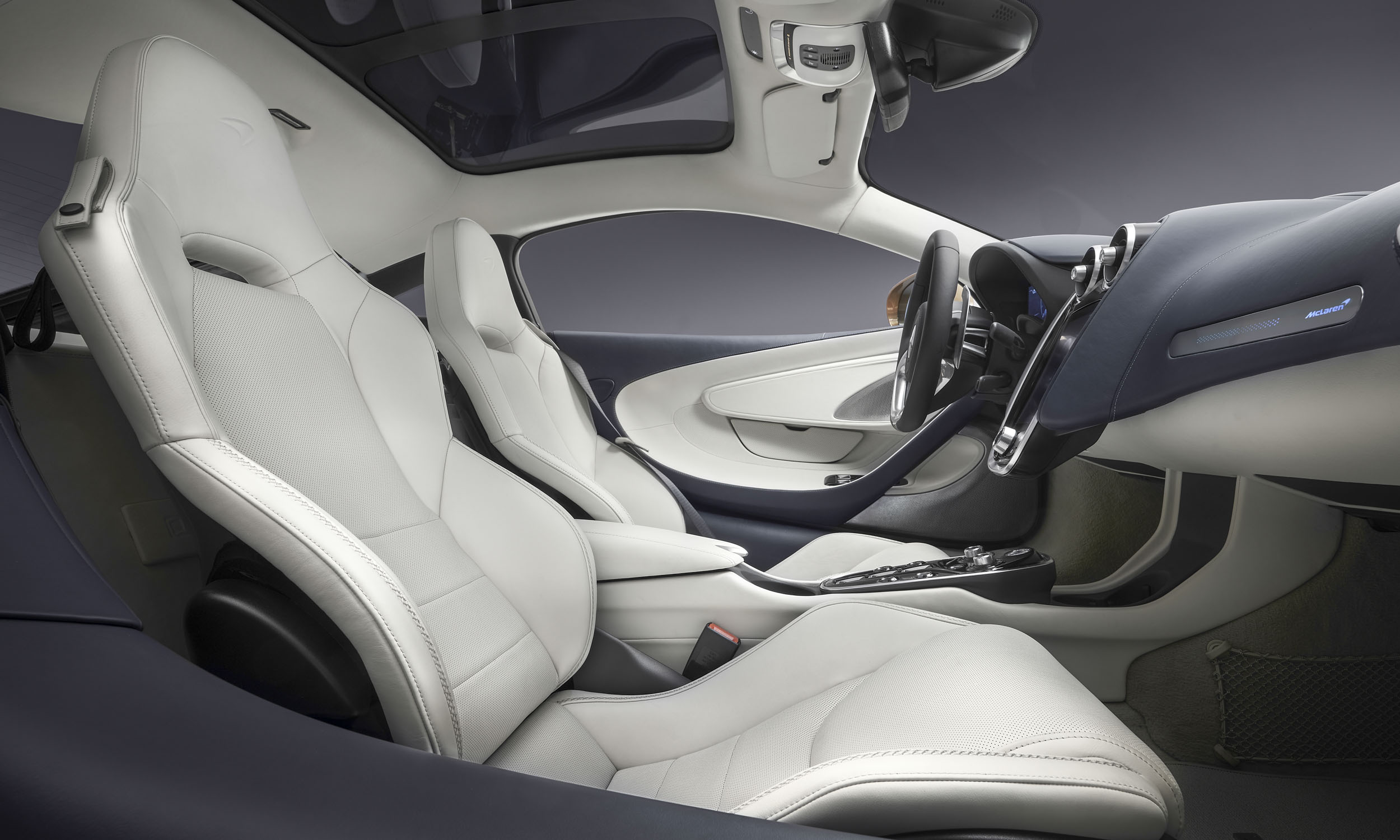 © McLaren
Interior Space
What really separates a sports car from a GT is the cabin, and McLaren has certainly done this one right. Visibility and controls are designed with driving performance in mind; however, the power-operated heated seats are covered in Nappa leather, and the cabin is trimmed in the finest materials. Seating surfaces can be covered in soft-grain luxury leather, Alcantara or — for the first time in a production vehicle, according to McLaren — cashmere wool. 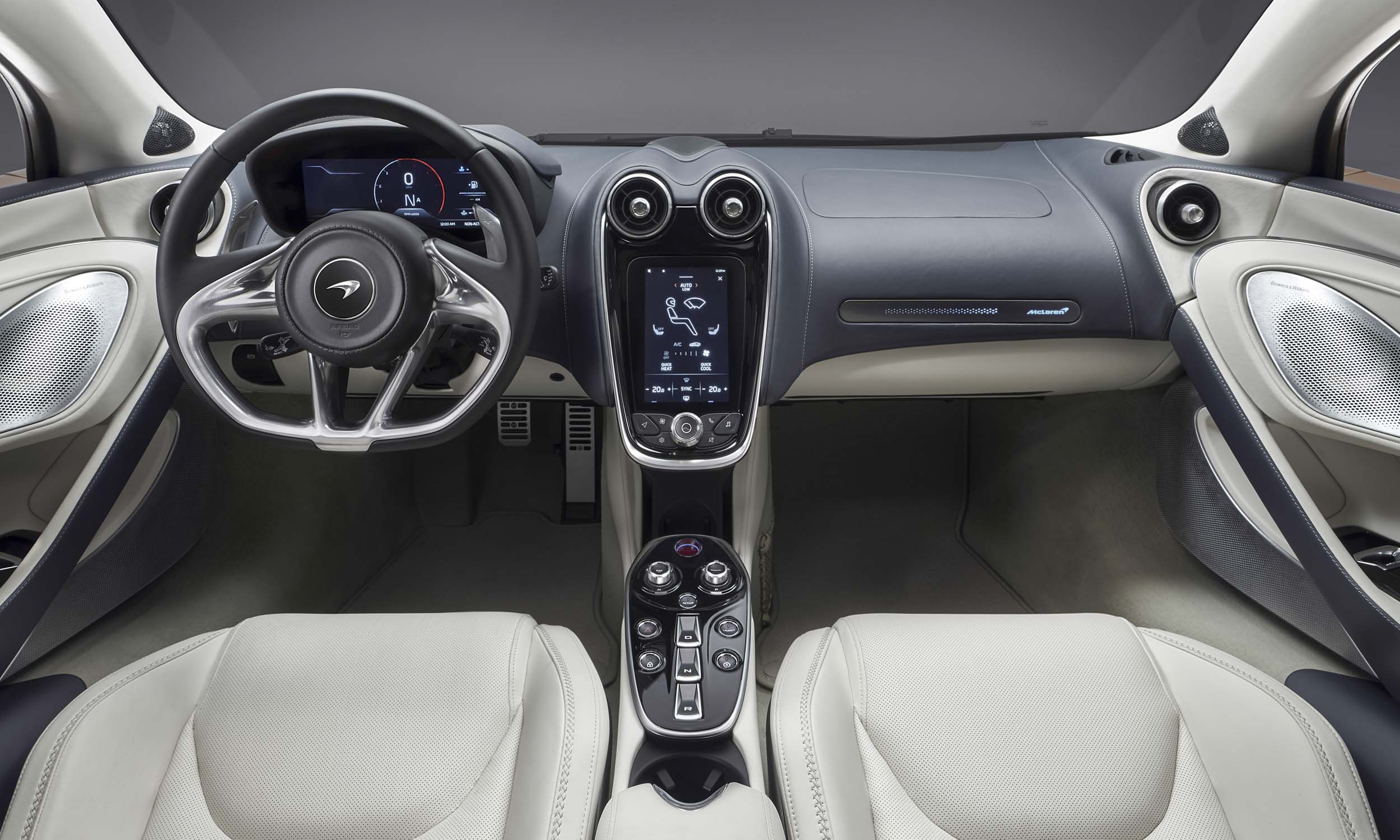 © McLaren
Elegant Touches
The GT gets the latest McLaren infotainment system; it can also be fitted with a 12-speaker Bowers & Wilkins premium audio system with carbon-fiber sub-bass woofers and Kevlar mid-range units. Switches and controls are fashioned from machined and knurled aluminum — as are the steering-wheel-mounted shift paddles — contrasting with gloss back trim around window switches and air vents. A carbon fiber composite gloss back roof is standard equipment; however, buyers can opt for an electrochromic glazed panel that can be lightened or darkened at the touch of a button. 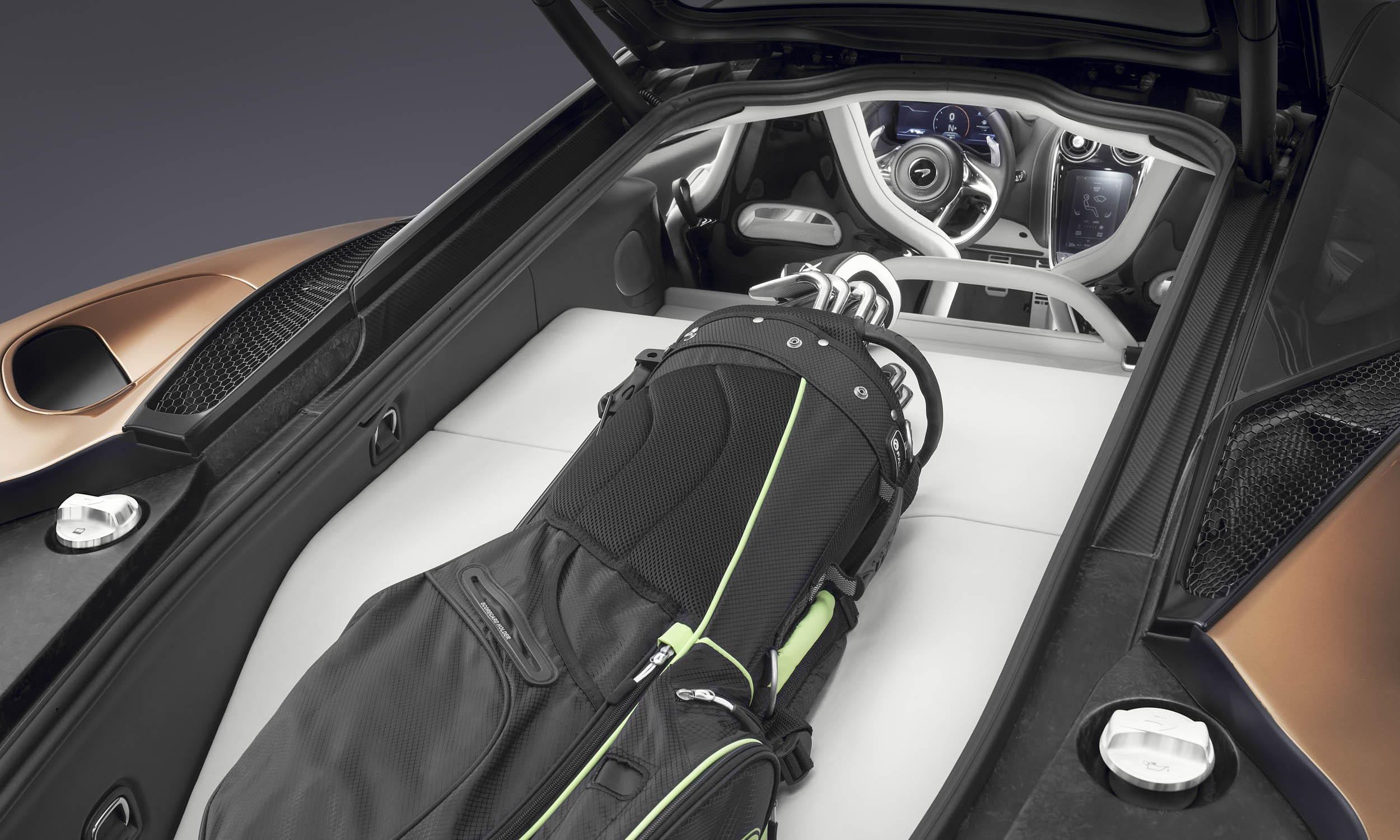 © McLaren
Room for Luggage
Since a grand touring vehicle’s intended purpose includes lengthy road trips, luggage space must be a consideration. The new McLaren GT has a glass rear hatch that covers almost 15 cubic feet of cargo area. Folks fortunate enough to pack for a road trip in this eye-catching supercar will find an additional 5.3 cubic feet of storage up front, in what some might call the “frunk.” 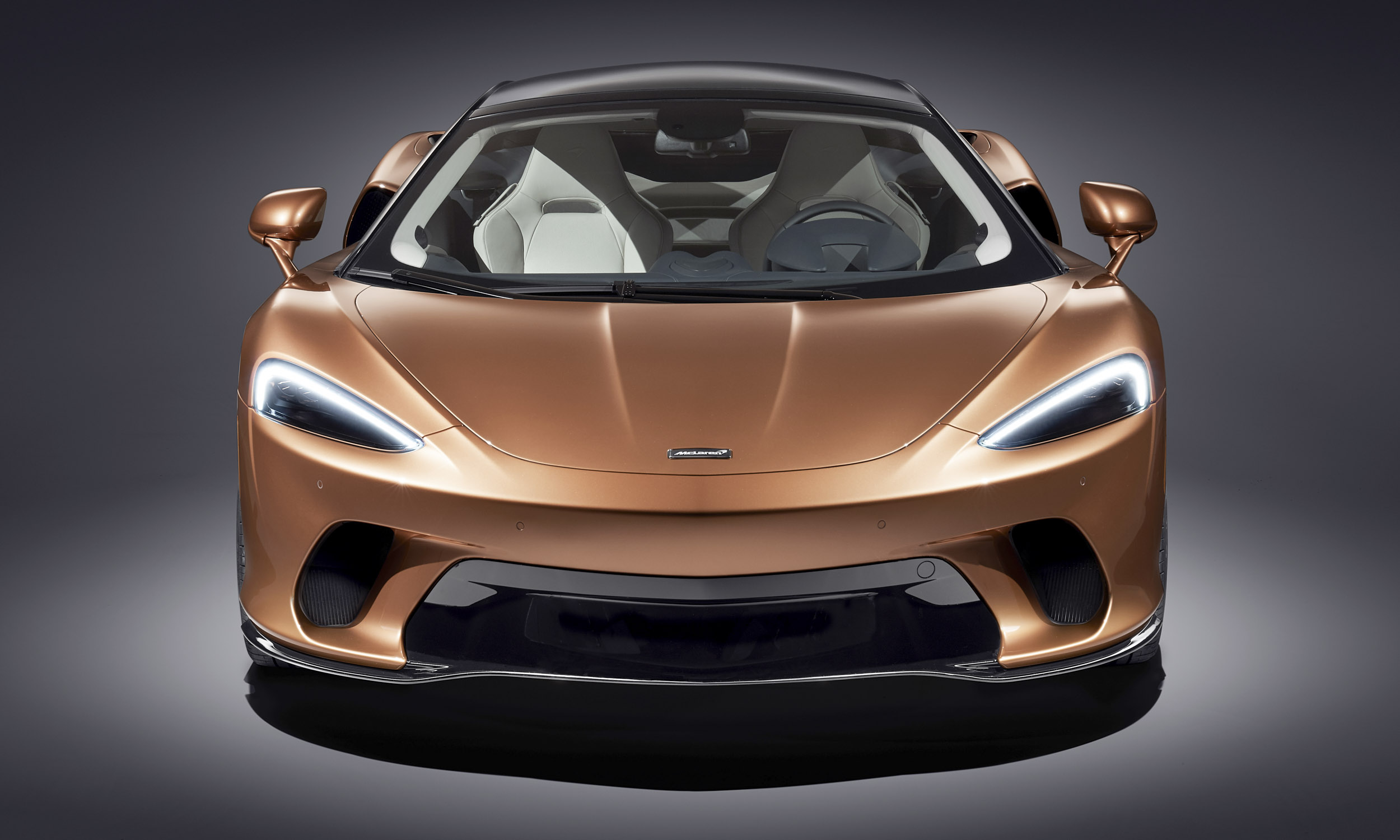 © McLaren
Everyday Usability
Since the driver of this grand tourer might also contend with common devices such as speed bumps, McLaren engineers designed the GT with adequate approach angles to handle “the most aggressive traffic calming measures.” Even so, the driver can raise the GT as necessary, which increases ground clearance from 4.3 inches to 5.1, making this car more user-friendly in urban environs. 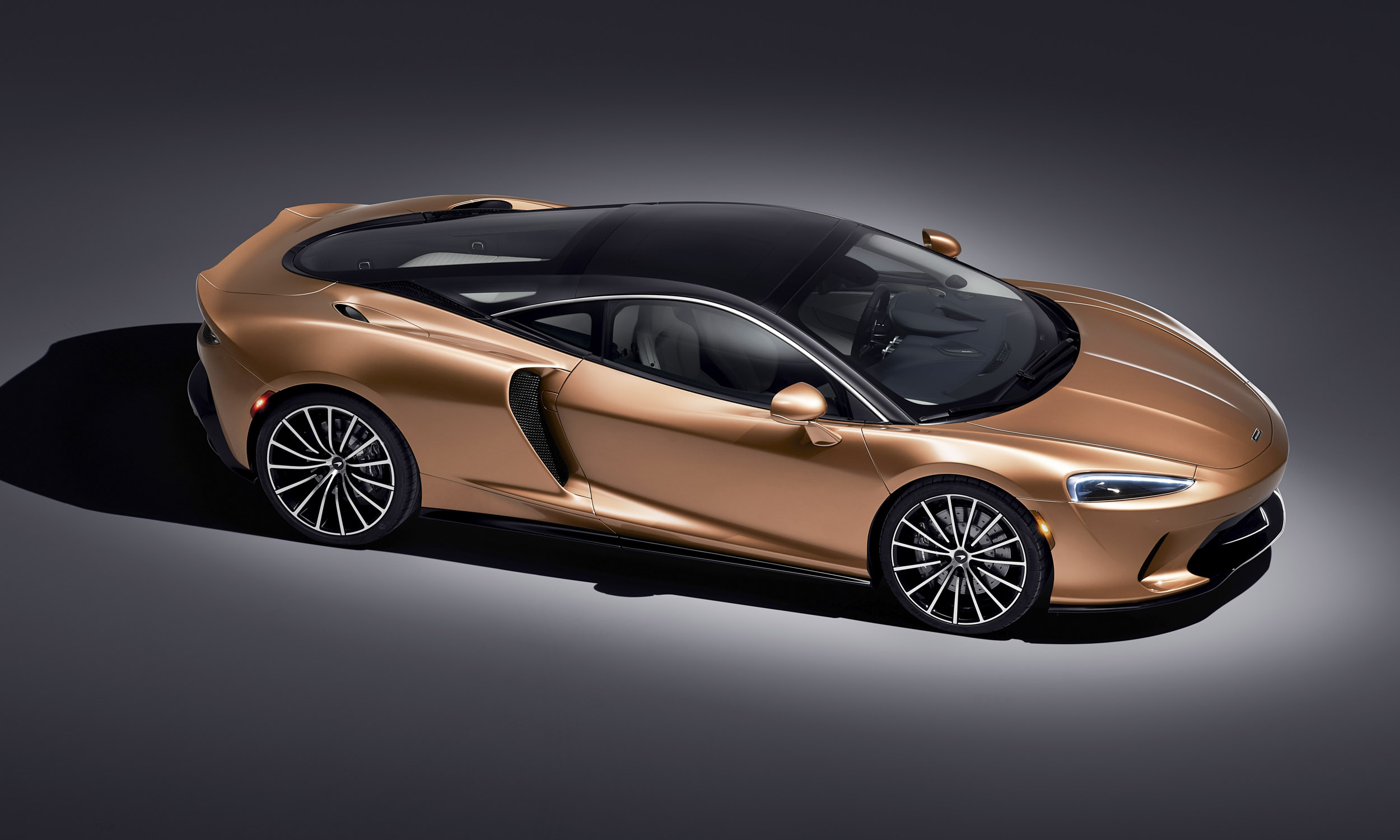 © McLaren
Classic GT Lines
Whether the GT cruises freeways at high speeds or snakes its way through the urban jungle, it will certainly turn heads with eye-catching looks. Longer than any vehicles of McLaren’s Sports or Super Series, the GT has classic Grand Tourer lines that stretch from the base of the windshield to the edge of the integrated rear spoiler. The bold rear fenders are a perfect example of form following function — they also incorporate air intakes to help cool the engine. 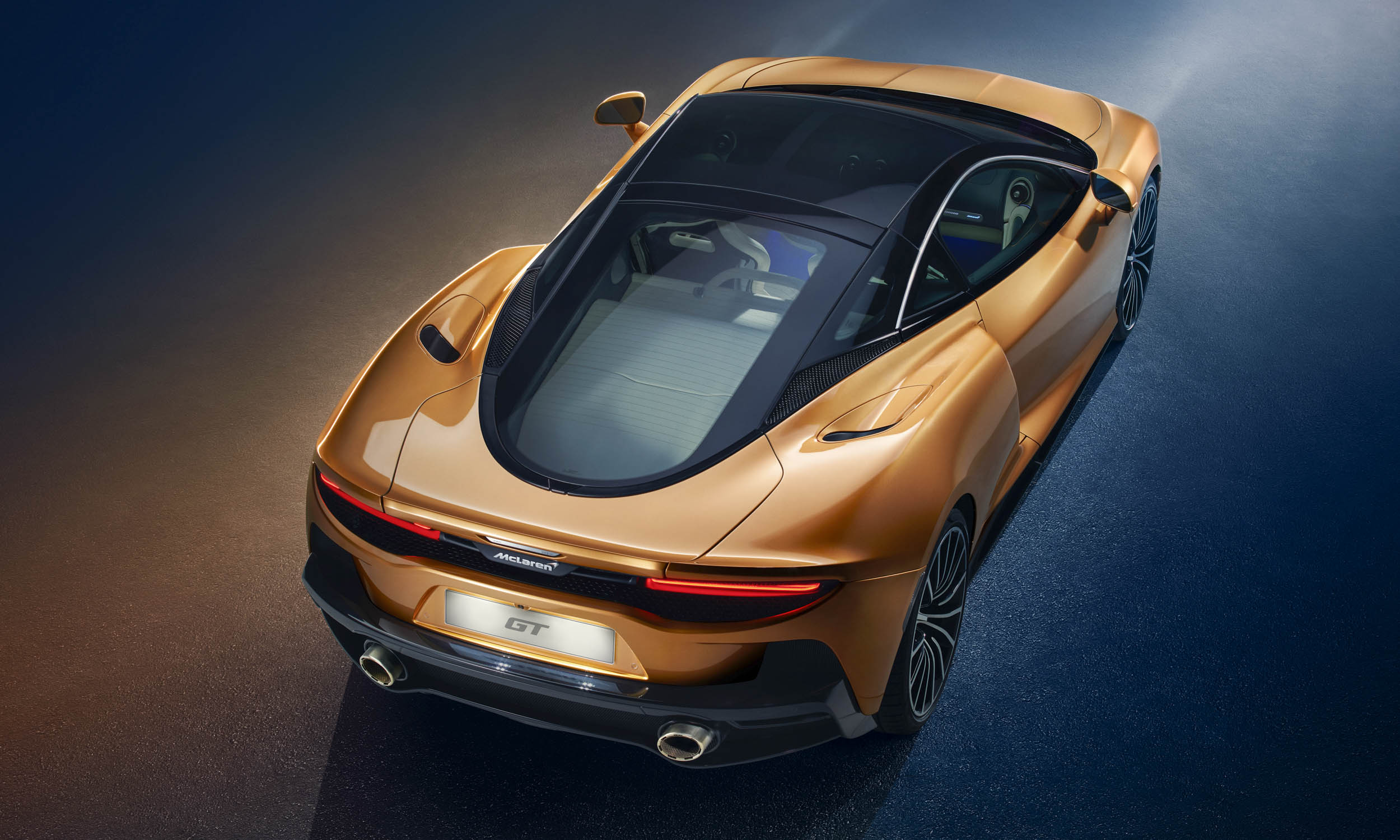 © McLaren
Power and Luxury
“The new McLaren GT combines McLaren’s design philosophies with classic Grand Tourer visual cues,” said Rob Melville, design director at McLaren Automotive. “The sophisticated, sculpted body expresses both the power of the car and its ability to cosset occupants during long-distance driving. . . . The new McLaren GT clearly stands out both as a new type of McLaren and a cutting-edge interpretation of a Grand Tourer for a new era,” Melville proclaimed. 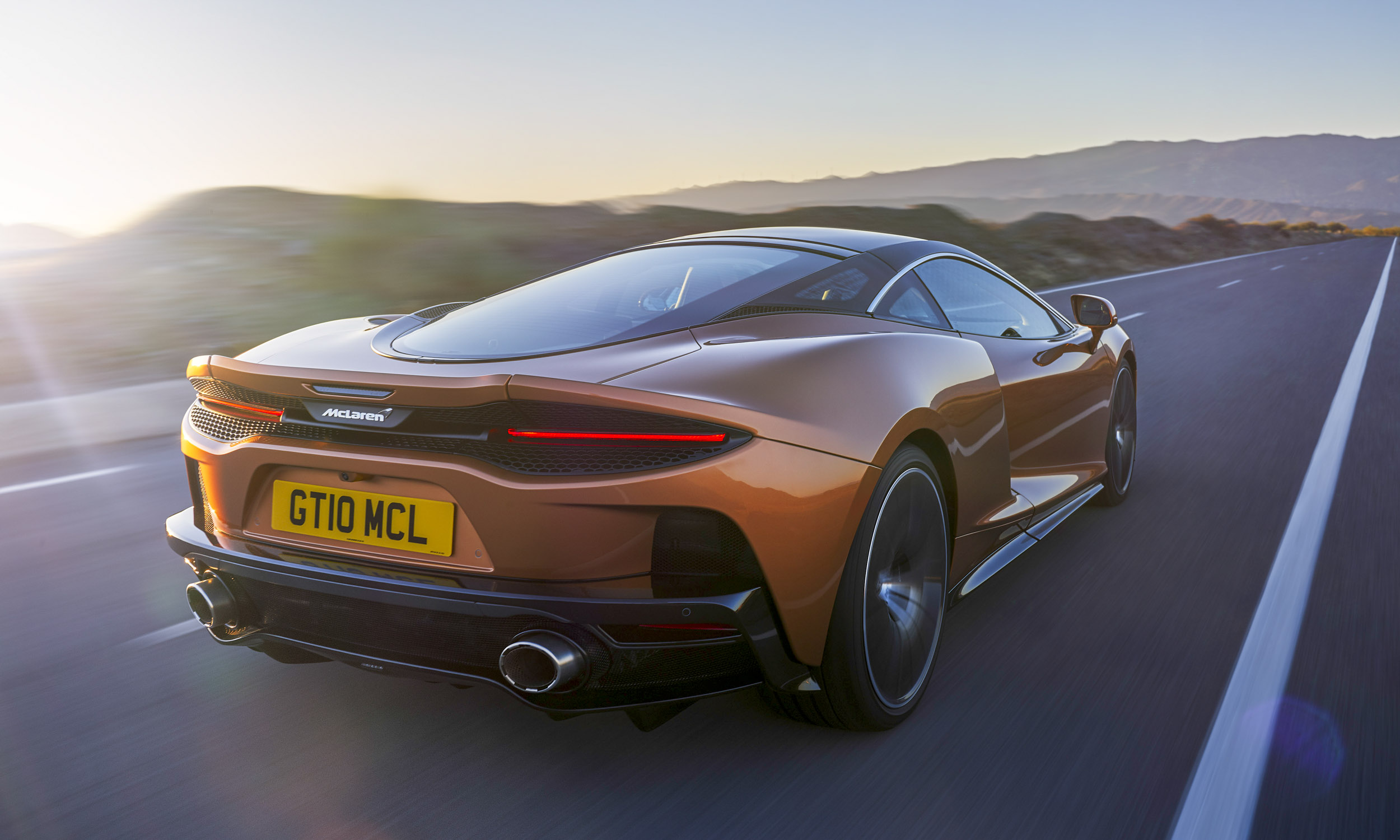 © McLaren
Order Now
The new McLaren GT has a base retail price in the U.S. of $210,000. Orders are being taken now, with deliveries expected to begin by the end of the year.