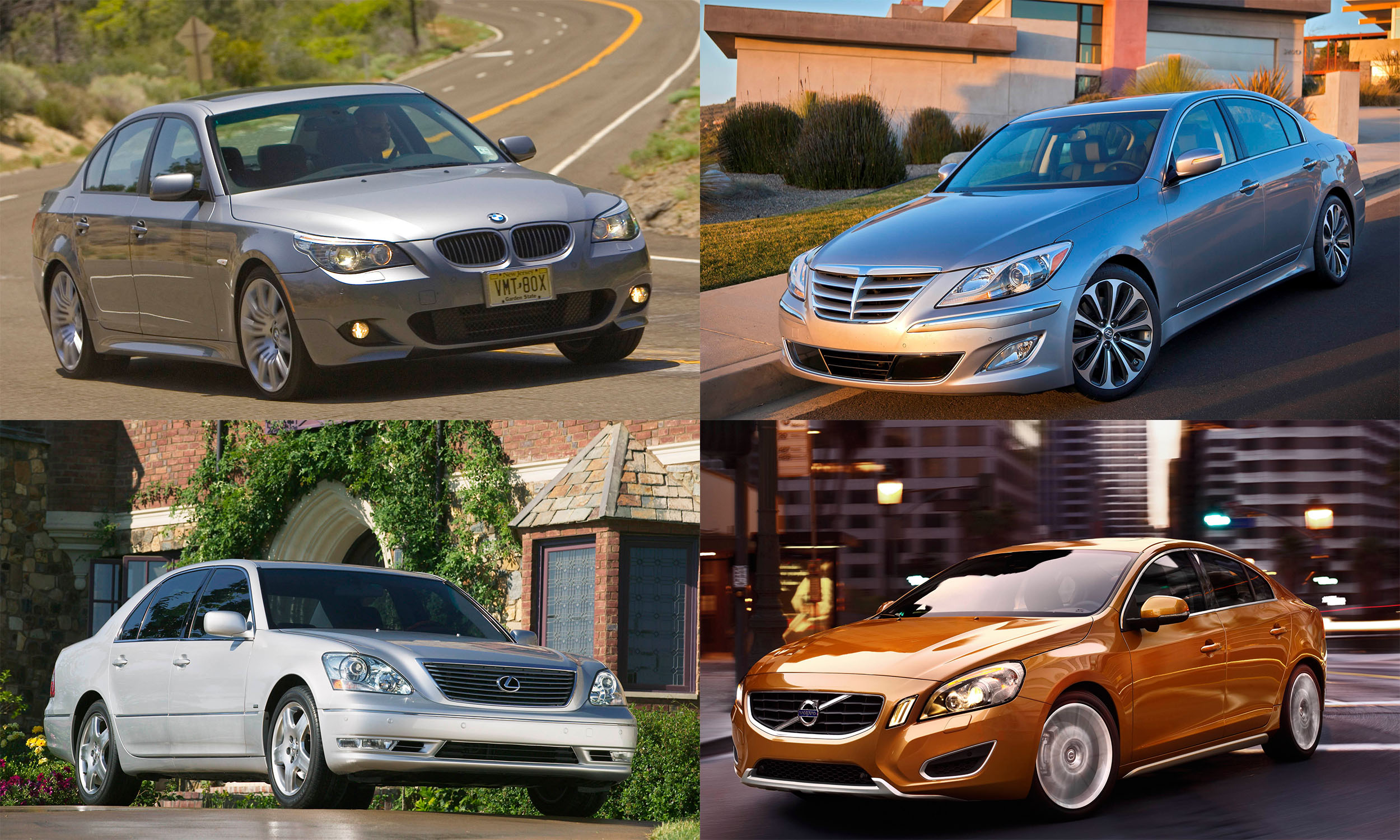 Affordable Luxury
Americans love luxury cars, and if they don’t have one, often times they’re aspiring to own a Mercedes, Lexus or BMW. Well, aspire no more. If you’re willing to accept a car that’s a few years old, you can be riding in the lap of luxury for about the price of a new Toyota Camry. All of the following cars can be found in various used car markets with less than 75,000 miles on the clock and a price not exceeding $20,000. Of course every used car has a different history so there are no guarantees, but with proper research you should be able to find yourself a sweet ride and save some major green. 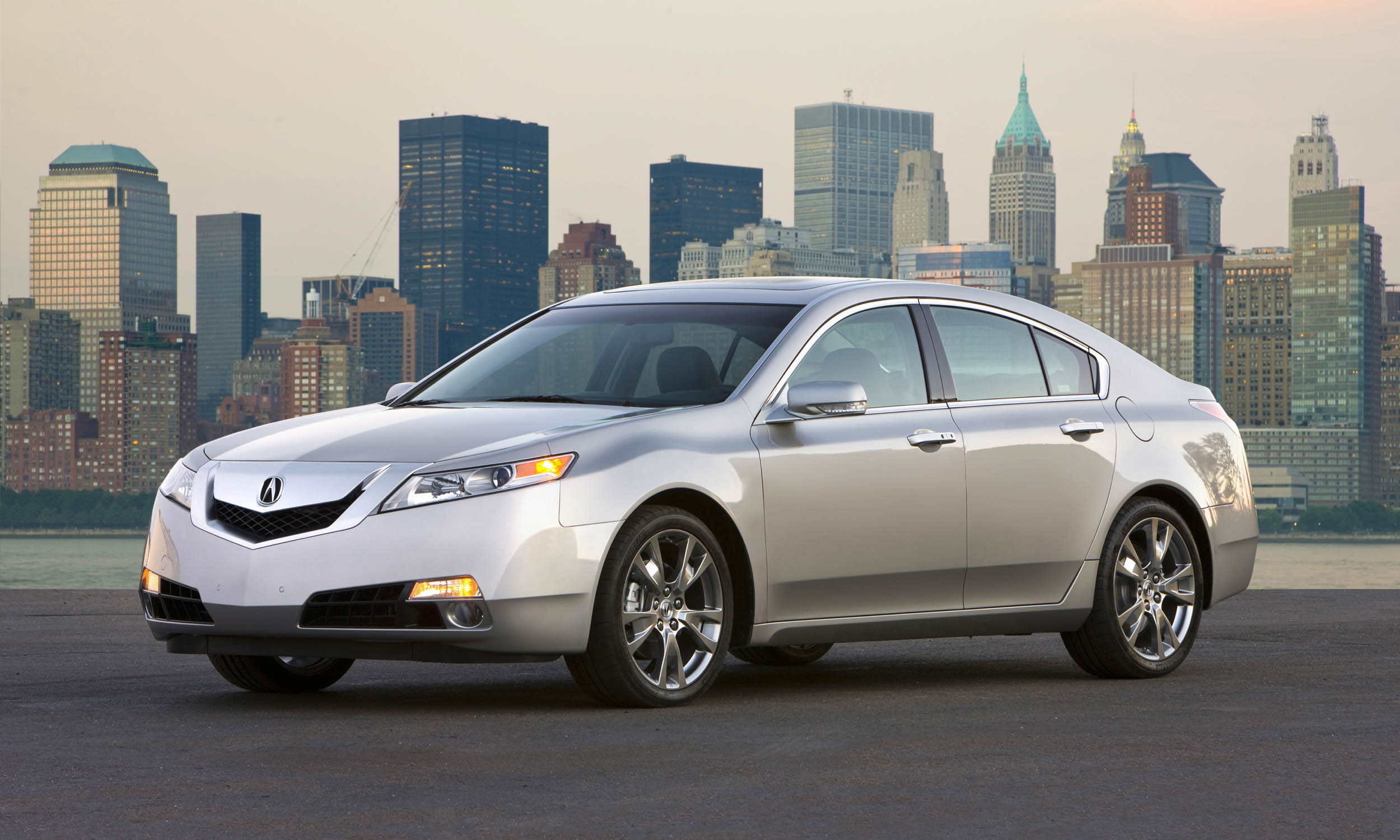 2009–12 Acura TL
Original MSRP: $34,955 – $45,185
The Acura TL was redesigned for the 2009 model year with fresh styling and a more powerful V6 engine. This midsize sport sedan gets you all the creature comforts you’d expect in an Acura, including leather trimmed seats, metallic and wood accents, a power moonroof, dual-zone climate control and an 8-speaker high-end audio system with Bluetooth connectivity. The 2009 TL was the first to offer Acura’s Super Handling All-Wheel Drive (SH-AWD), which is teamed with a powerful 305-horsepower V6. 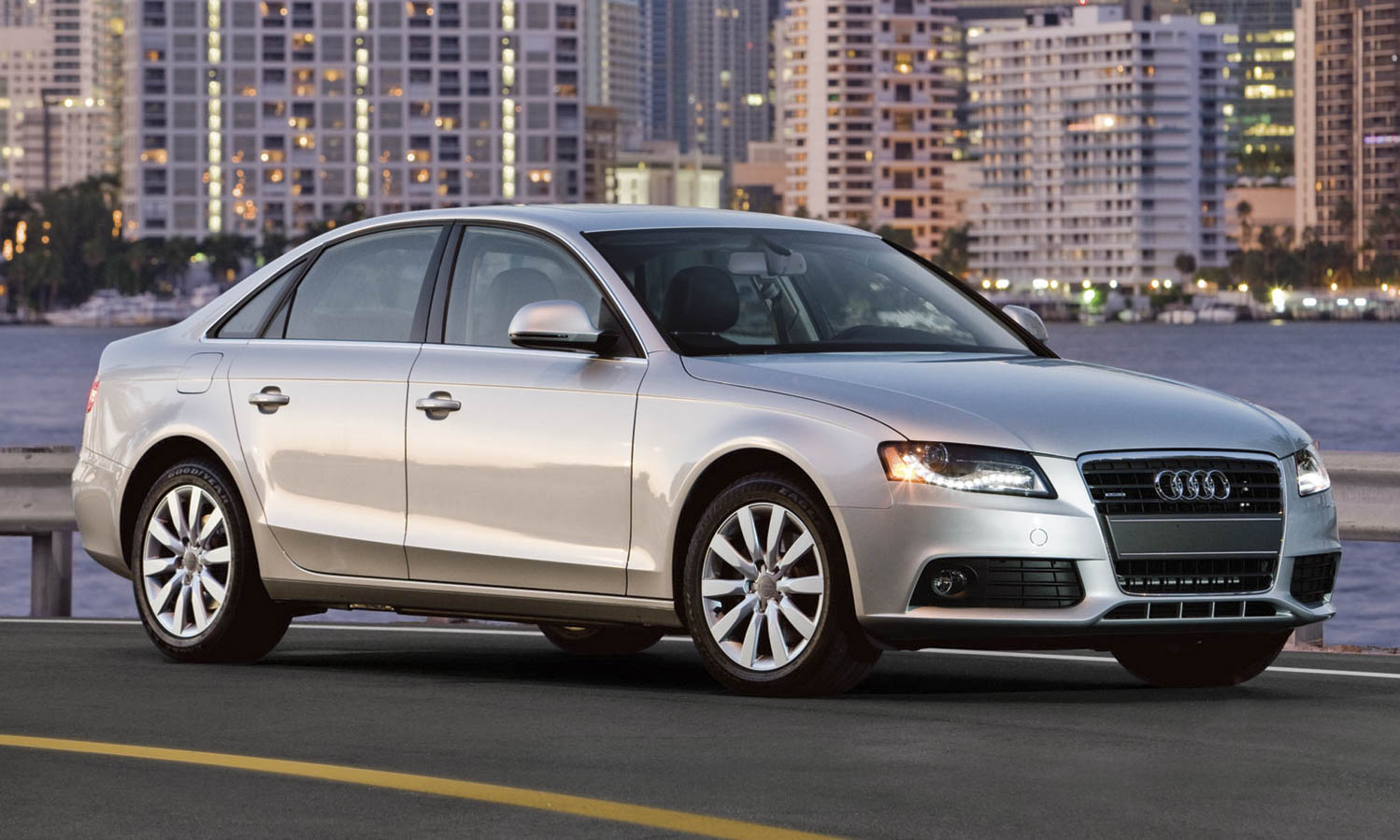 2009–12 Audi A4
Original MSRP: $31,000 – $36,400
Audi’s entry-level sedan — until the A3 sedan recently came to market — was the A4. The German 4-door received a complete redesign for the 2009 model year, offering a more spacious interior as well as updated styling. Most A4s priced below $20,000 will be available with the 211-horsepower 2.0-liter turbocharged engine with either front-wheel drive or quattro all-wheel drive. The A4 Avant wagon may be harder to find, but it is available in this range as well. 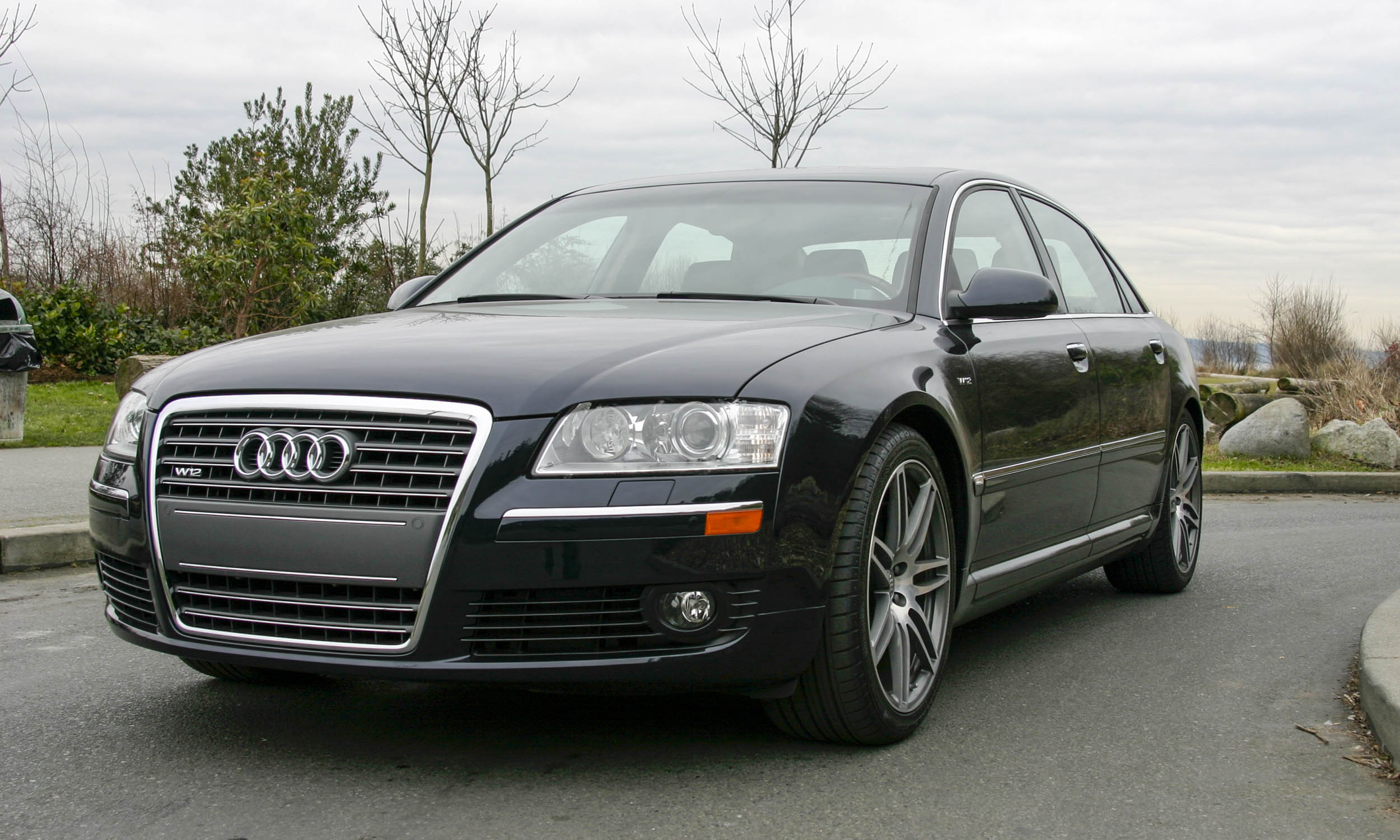 2006–7 Audi A8
Original MSRP: $68,130 – $119,350
In 2006 Audi’s flagship A8 received the large single-frame grille that we’ve grown to expect on every Audi today. Two engines were available in this luxury sedan: a 335-horsepower V8 and 450-horsepower V12; however, most buyers will be hard pressed to find an A8 V12 for less than $20,000. With high-end materials throughout the cabin, a roomy rear seat and advanced options such as adaptive cruise control and a personal refrigerator, the A8 would be a great luxury find. 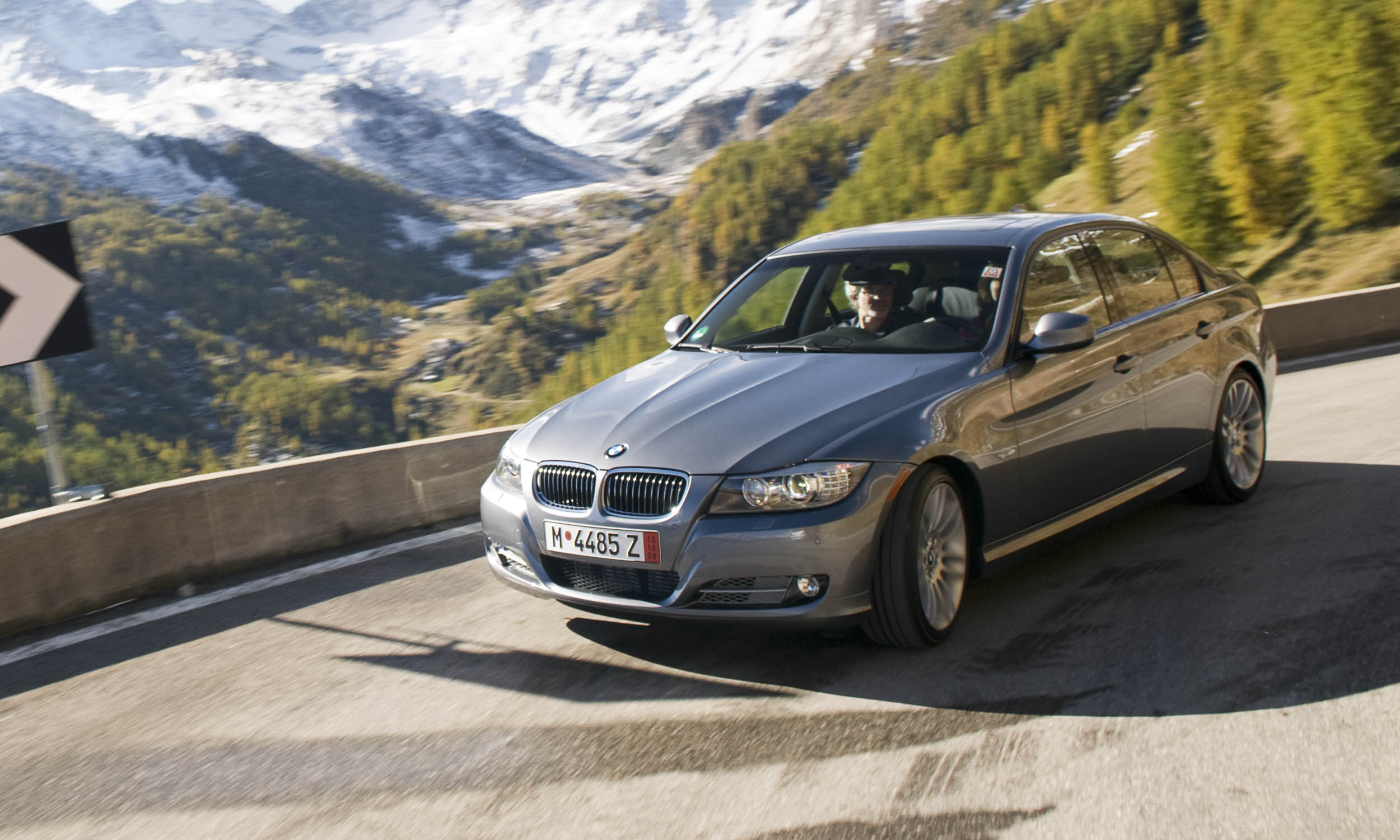 2010–11 BMW 3 Series
Original MSRP: $33,150 – $67,550
The BMW 3 Series has won many awards over the years, and it still sets the bar for sport sedans. While there were a number of bodystyles and engine choices at the turn of the last decade, the most commonly found low-mileage 3 Series will be the 328i sedan with a 230-horspower engine and rear or all-wheel drive. However, if you are patient and persistent, you may be able to find the 300-horsepower 335i or a 328i convertible and stay under the $20,000 budget. 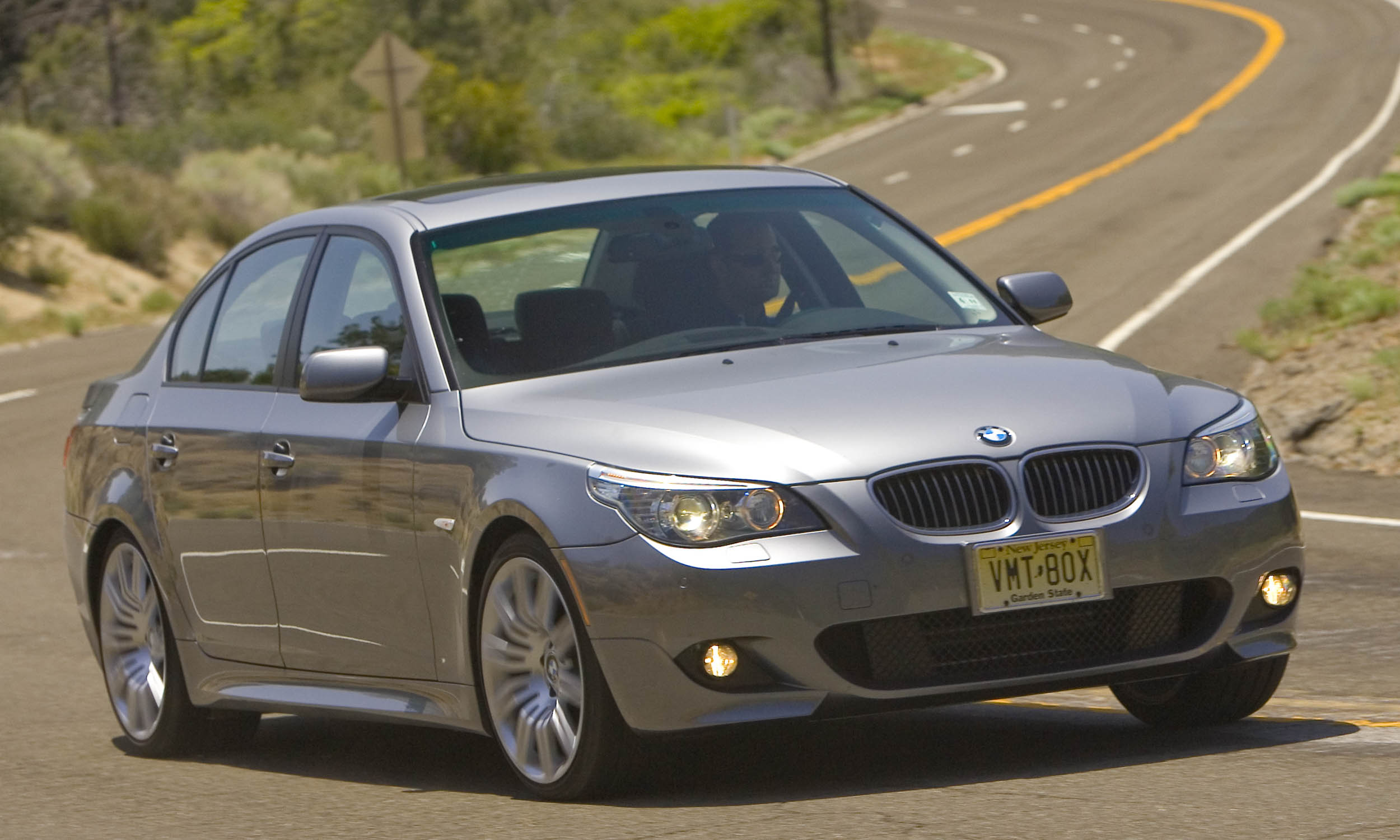 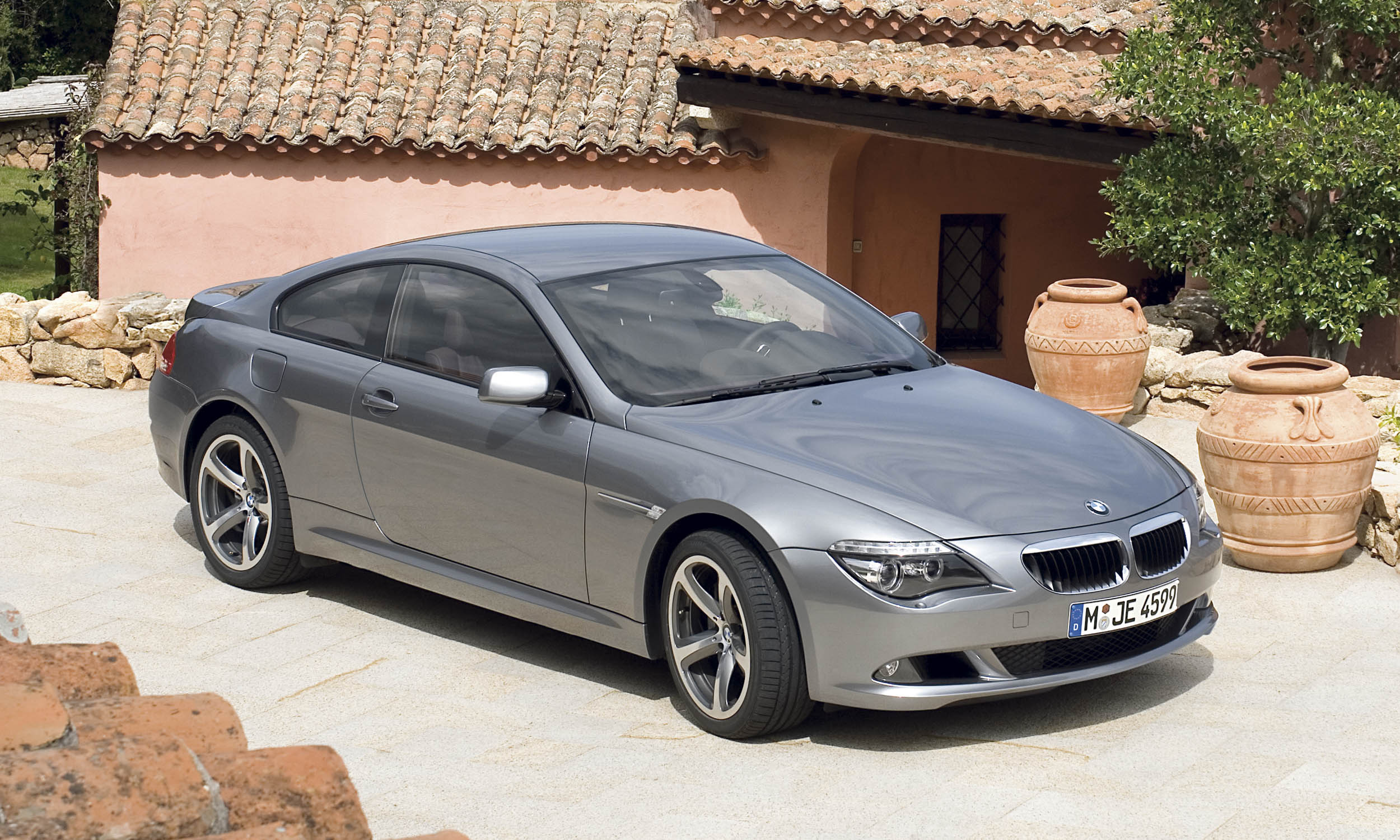 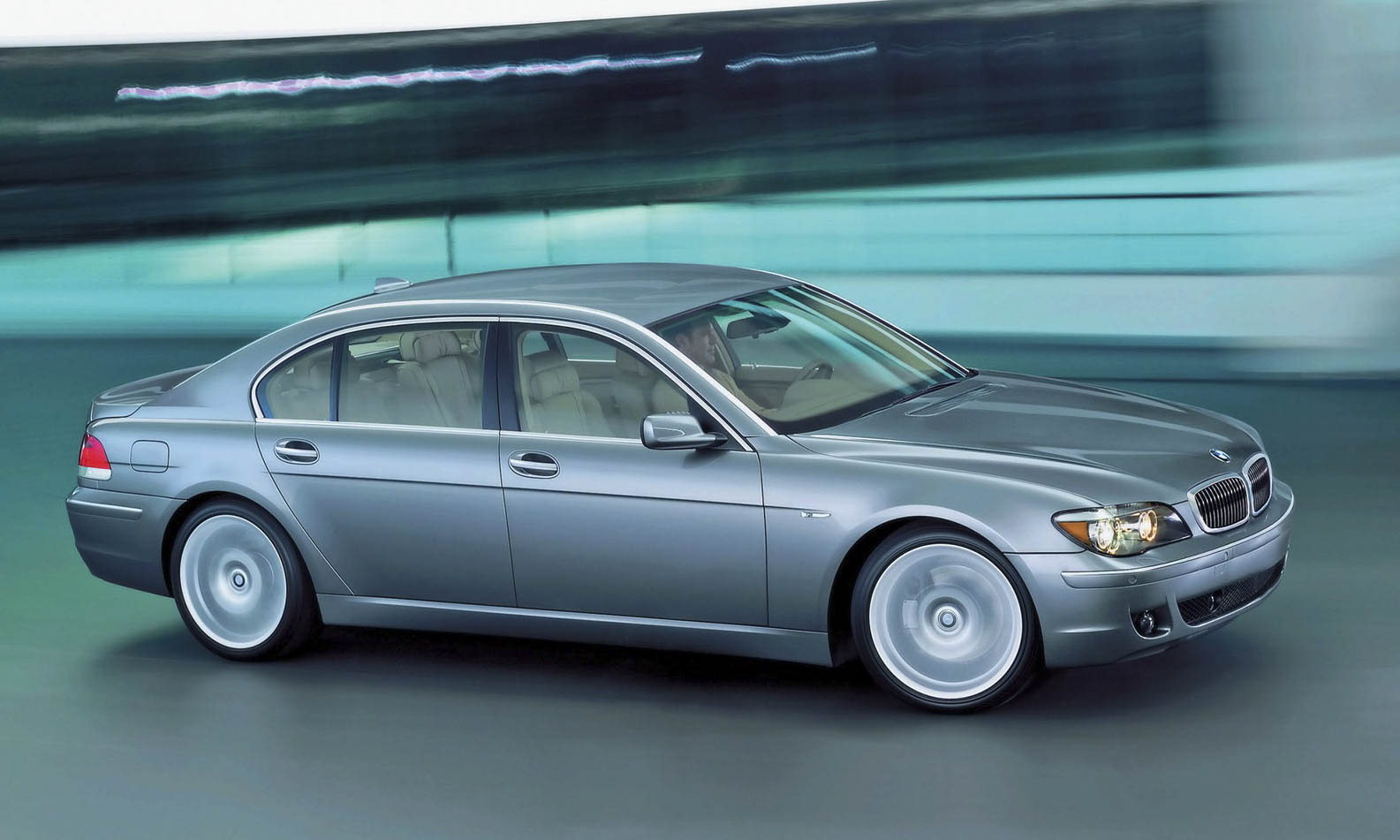 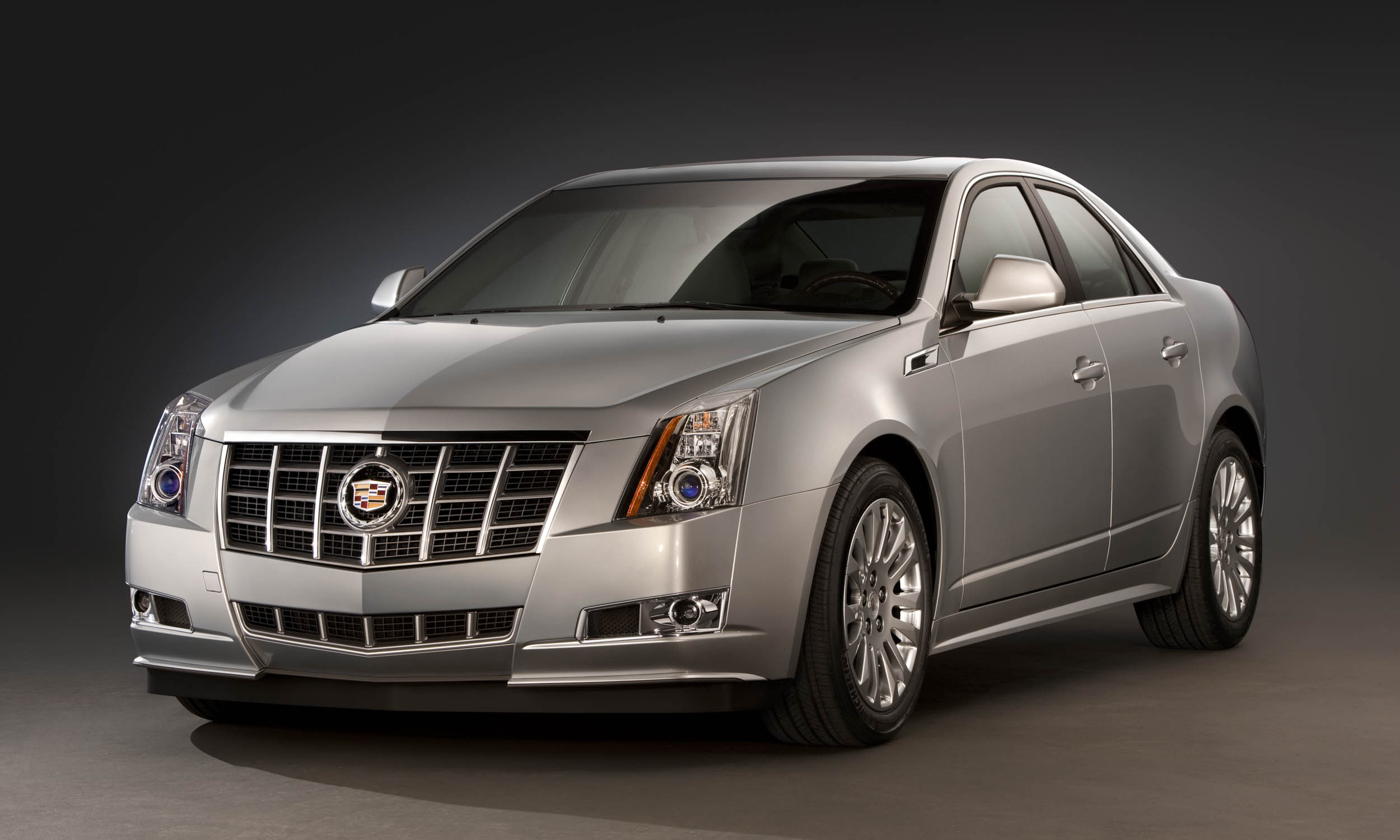 2011–12 Cadillac CTS
Original MSRP: $35,345 – $50,190
The CTS represented a rebirth for Cadillac when it was introduced in 2003, but you don’t have to go back that far to pick up a quality CTS for $20,000. Designed to go after BMW with a healthy mix of luxury and performance, the CTS can be had with rear or all-wheel drive. Although built as a sedan, wagon and coupe, the bodystyle widely available is the sedan with the 3.0-liter V6. If you’re looking for something more powerful, you might be able to find a CTS 3.6 that boasts more than 300 horsepower. 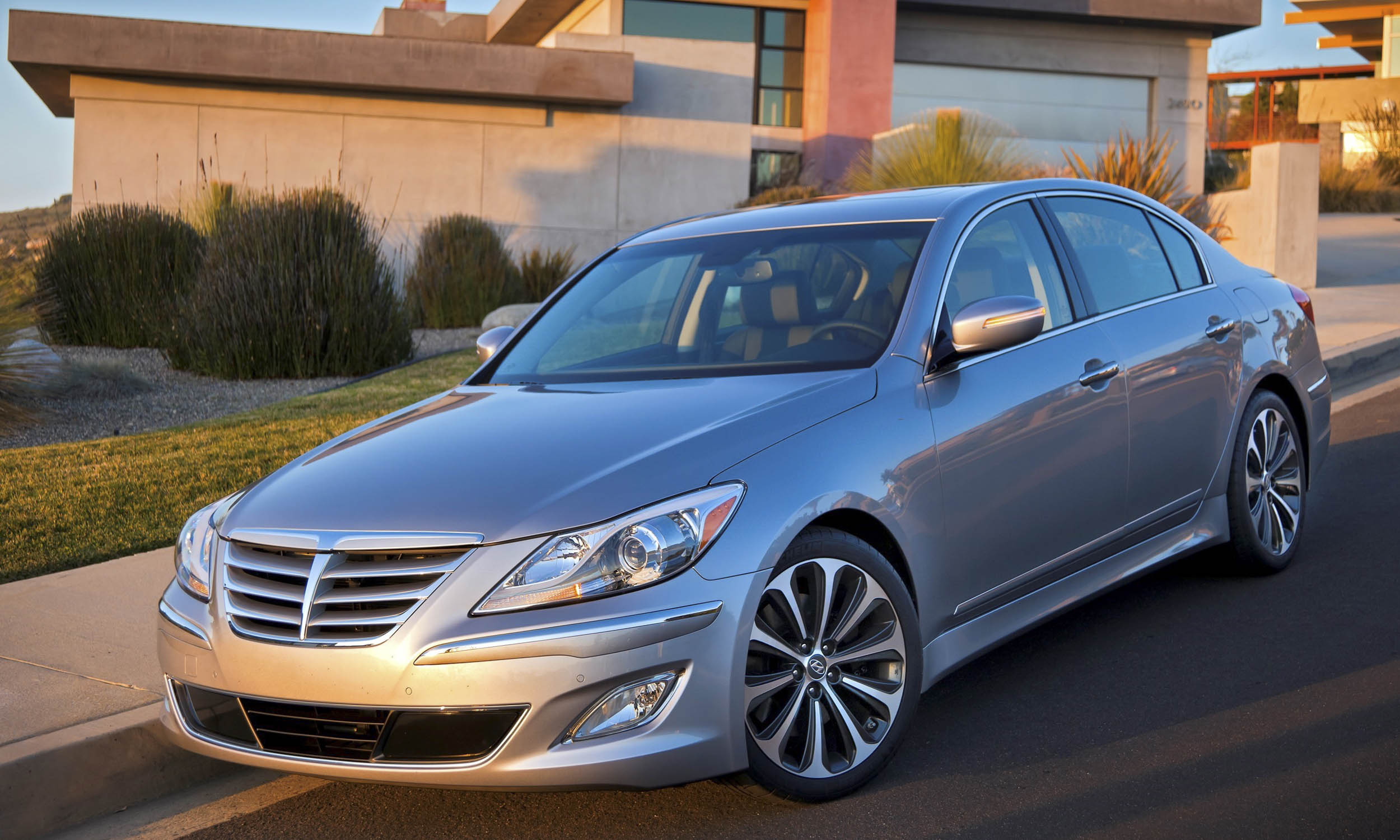 2010–13 Hyundai Genesis
Original MSRP: $33,000 – $46,800
Hyundai’s first entry into the American luxury car market was the Genesis sedan. With rear-wheel drive and an available V8, the Genesis went head-to-head with some of the best offerings from Europe — but at a considerably lower price. The low starting price makes it possible to find one of these beauties complete with power heated leather seats, a high-end sound system, dual-zone climate control, a sunroof and many more standard features. Although you may be more likely to find the V6-powered Genesis, it is possible to get a fully-loaded V8 variant for under $20,000. 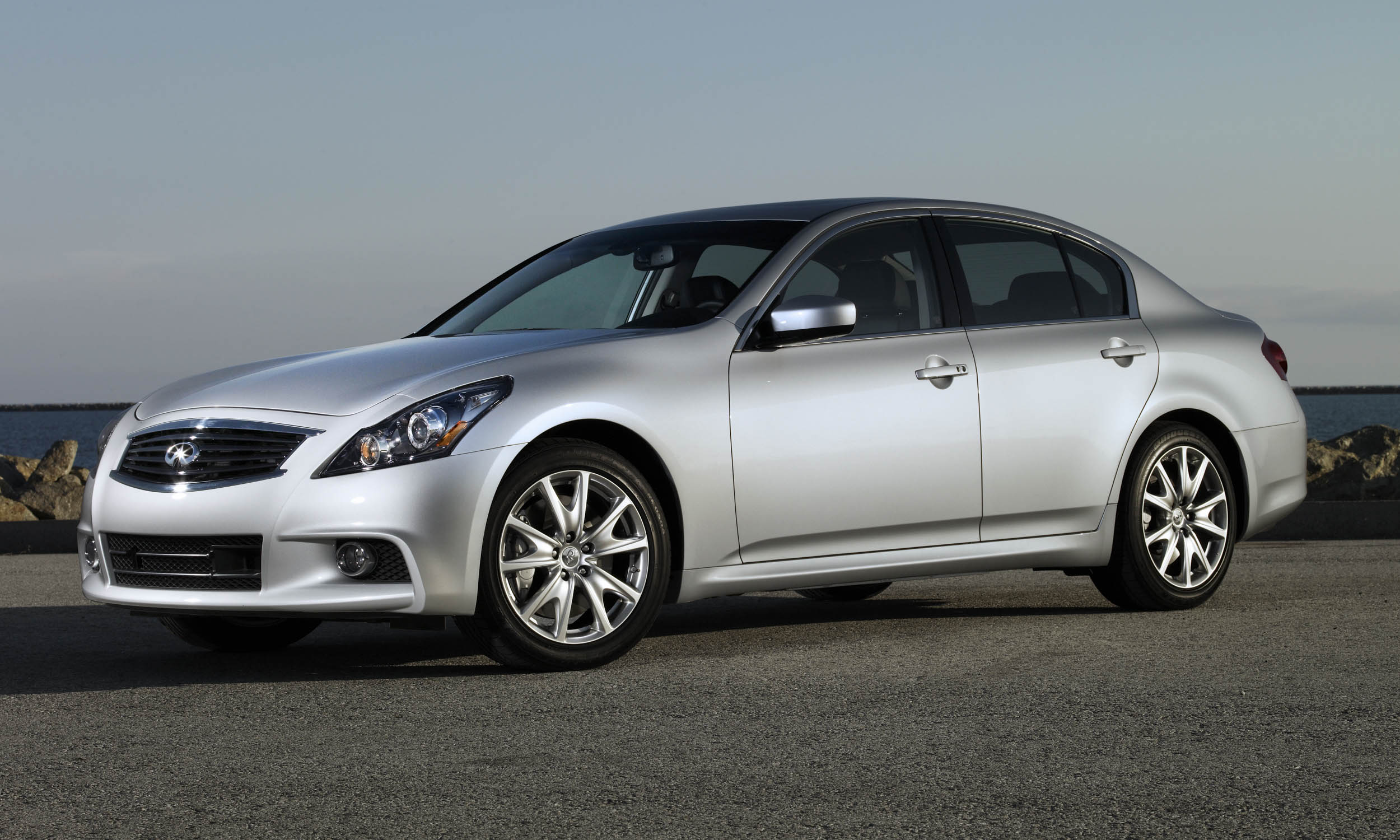 2009–13 Infiniti G37
Original MSRP: $33,350 – $41,950
Infiniti discontinued the G37 following the 2013 model year, replacing it with the Q50. However, there are late-model G sedans and coupes on the used-car market available below our $20,000 budget. Not only is the G37 well equipped with all the luxury features expected of an Infiniti — such as leather seats, a rearview camera, a large display screen and heated power seats — it sports a powerful V6 and rear-wheel drive for excellent performance and handling. 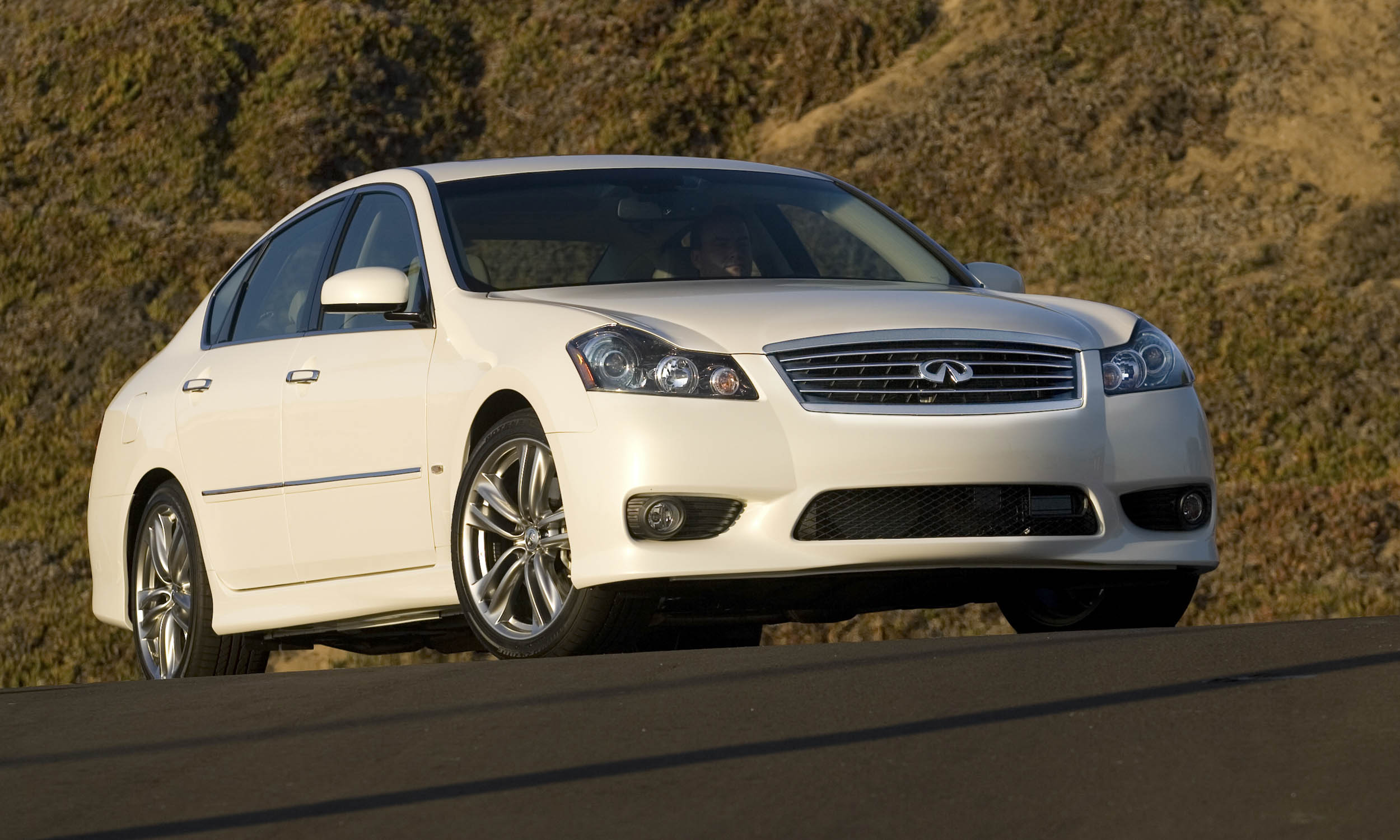 2009–10 Infiniti M35/45
Original MSRP: $45,800 – $54,650
The midsize luxury sedan from Infiniti offers attractive styling as well as impressive performance. Available as either the M35 with a 303-horsepower V6 or the V8-powered M45, the M could be equipped with either rear- or all-wheel drive. Inside you’ll find standard leather trim, heated and powered front seats, a push-button ignition, Bluetooth connectivity, available intelligent cruise control and a sophisticated voice activation system. 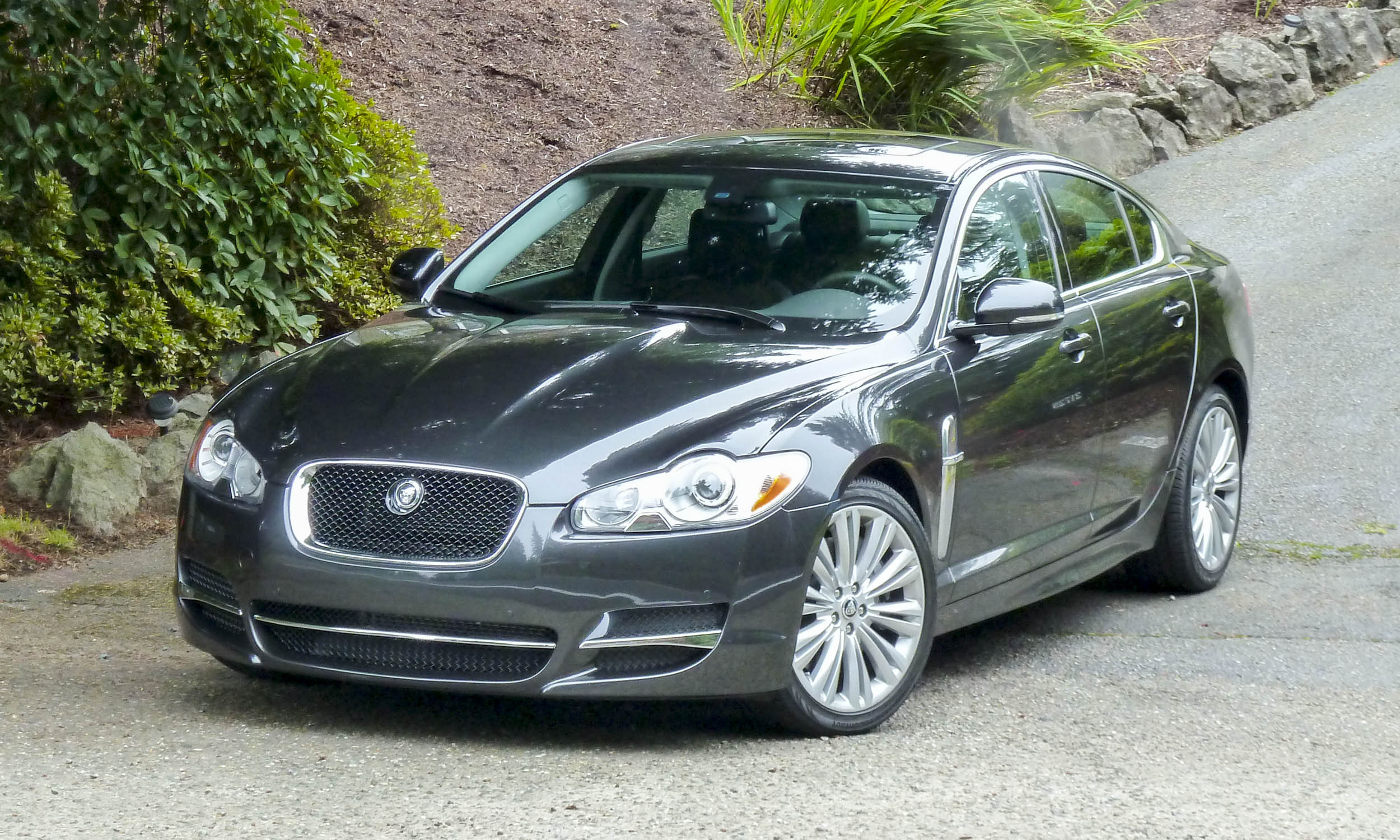 2009–10 Jaguar XF
Original MSRP: $49,200 – $69,150
In 2009 Jaguar premiered a midsize luxury sedan with styling that would soon be carried through the British marque’s lineup. With fine wood and leather trim expected inside a Jaguar, the XF also features a unique gearshift that rises out of the center console when the engine is started. Rear-seat passengers have plenty of room with large doors that make for easy entry and exit. Most XFs on the market for less than $20,000 will sport the base 300-horsepower V8 — the supercharged 420-horsepower option will likely exceed the budget. 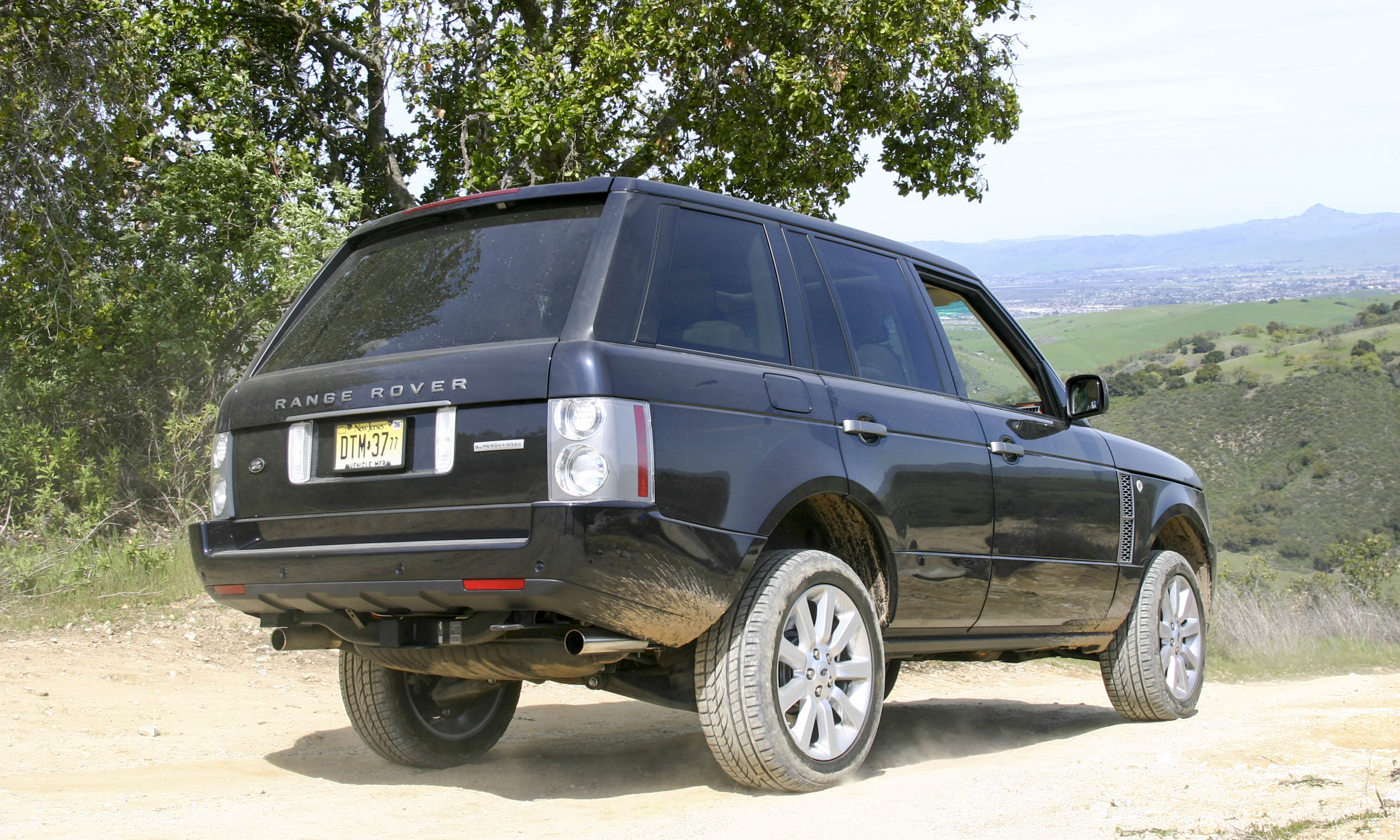 2006 Land Rover Range Rover
Original MSRP: $75,035 – $90,035
Most owners never take advantage of the amazing off-road capability of the Range Rover, but this could be your chance to experience what this SUV can do. But even if you don’t head off pavement, the Range Rover carries its passengers in luxurious surroundings and offers plenty of power for great street performance. The 2006 model year was the first with Jaguar V8s (previous years had BMW powerplants), which means even the base HSE boasts 305 horsepower. 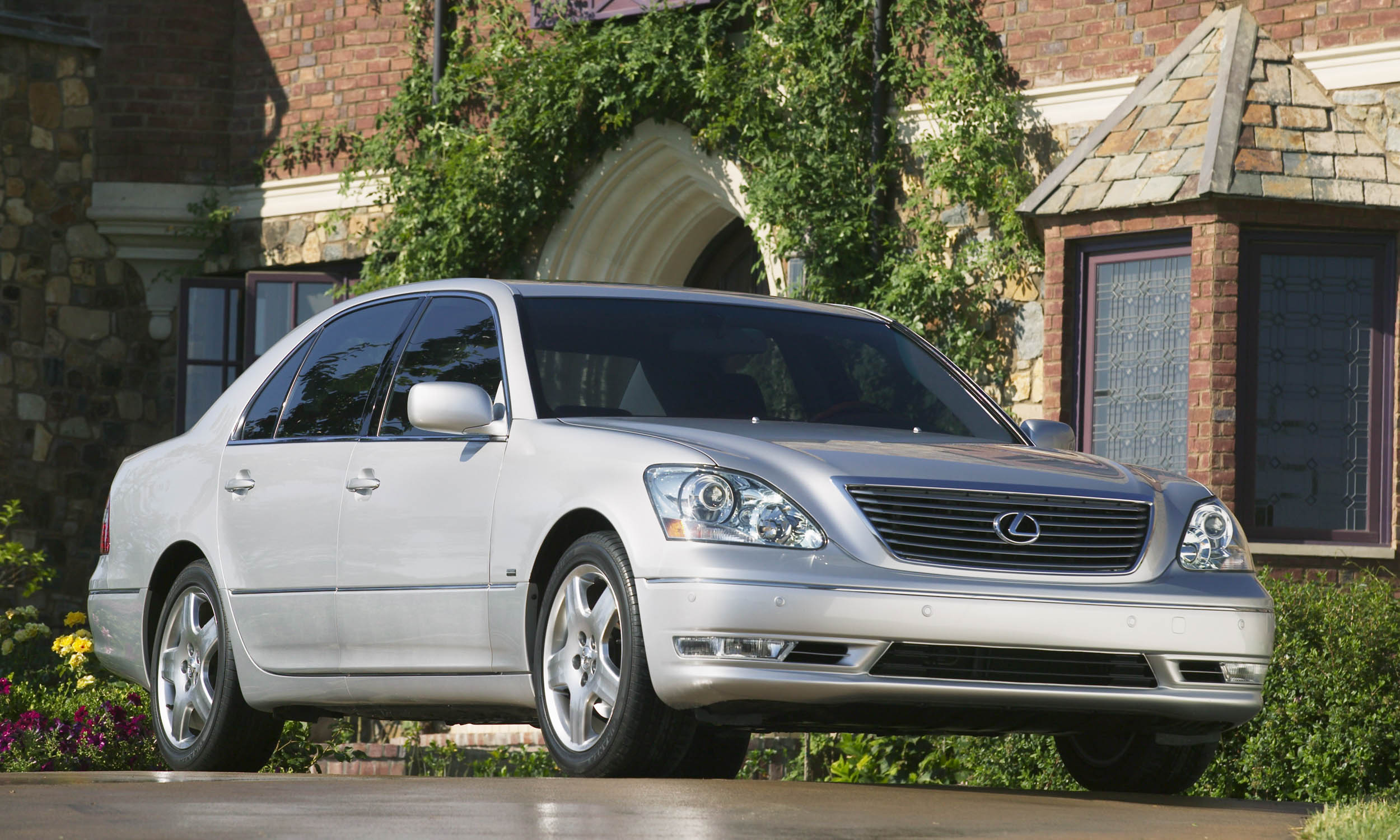 2004–06 Lexus LS
Original MSRP: $55,375 – $56,525
The flagship luxury sedan of the Lexus lineup, LS models from ten years ago will still impress. With a bold grille and large headlights, the LS of that era was the only full-size luxury model from Japan, and it competed head-to-head with the Mercedes-Benz S-Class and BMW 7 Series. Passengers ride in the utmost comfort, and while the LS did sport a powerful V8 engine, it was definitely more of a luxury cruiser than sport sedan. 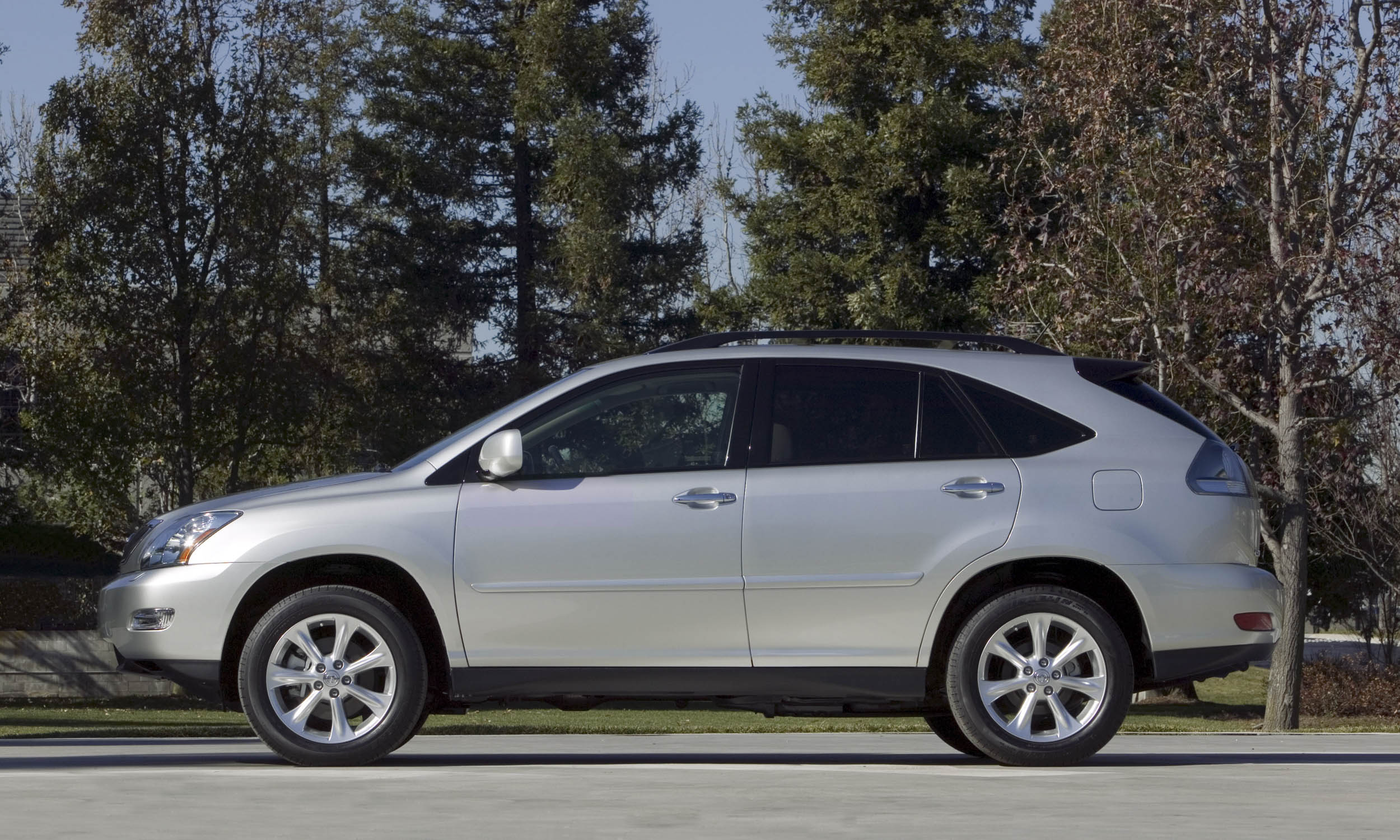 2007–09 Lexus RX
Original MSRP: $37,400 – $39,100
One of the first luxury crossovers on the market, the RX offers the utility of an SUV with the features and ride expected of a Lexus. Available with 2WD or AWD, the RX 350 is powered by a 3.5-liter V6 putting out a respectable 270 horsepower. Lexus also built a hybrid version of the RX — the 400h. Although there are a few on the market within our budget, they may take a bit more effort to find. 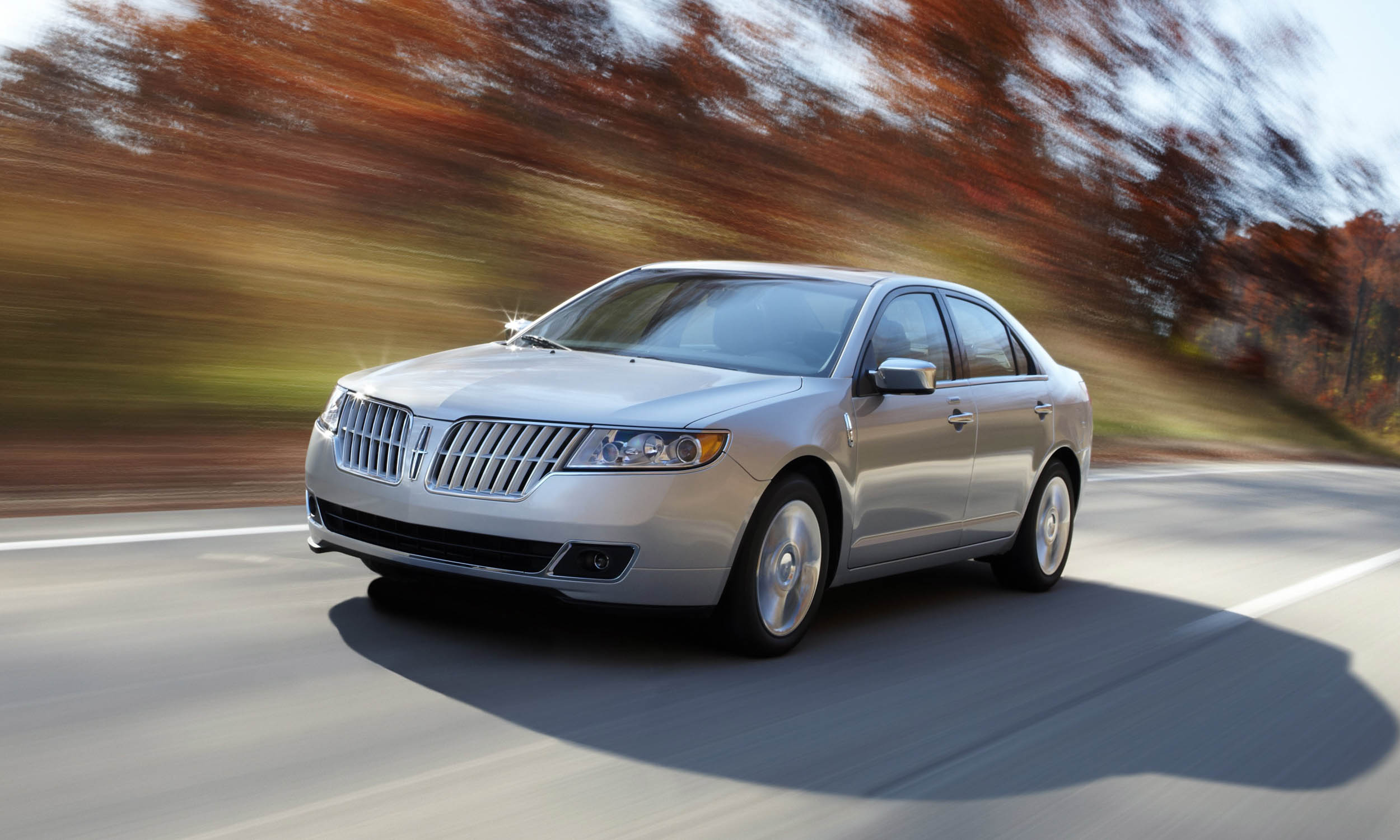 2010–12 Lincoln MKZ
Original MSRP: $34,225 – $36,645
The MKZ is Lincoln’s entry-level luxury sedan that was introduced as the Zephyr in 2006. Based on the very successful Ford Fusion, the MKZ was revamped in 2010 with new features and updated styling that ties in closely with the rest of the Lincoln lineup. MKZ is available with front or all-wheel drive, and a hybrid version was introduced for 2011. Many of the MKZs on the used-car market meeting our $20,000 budget are available with relatively low mileage. 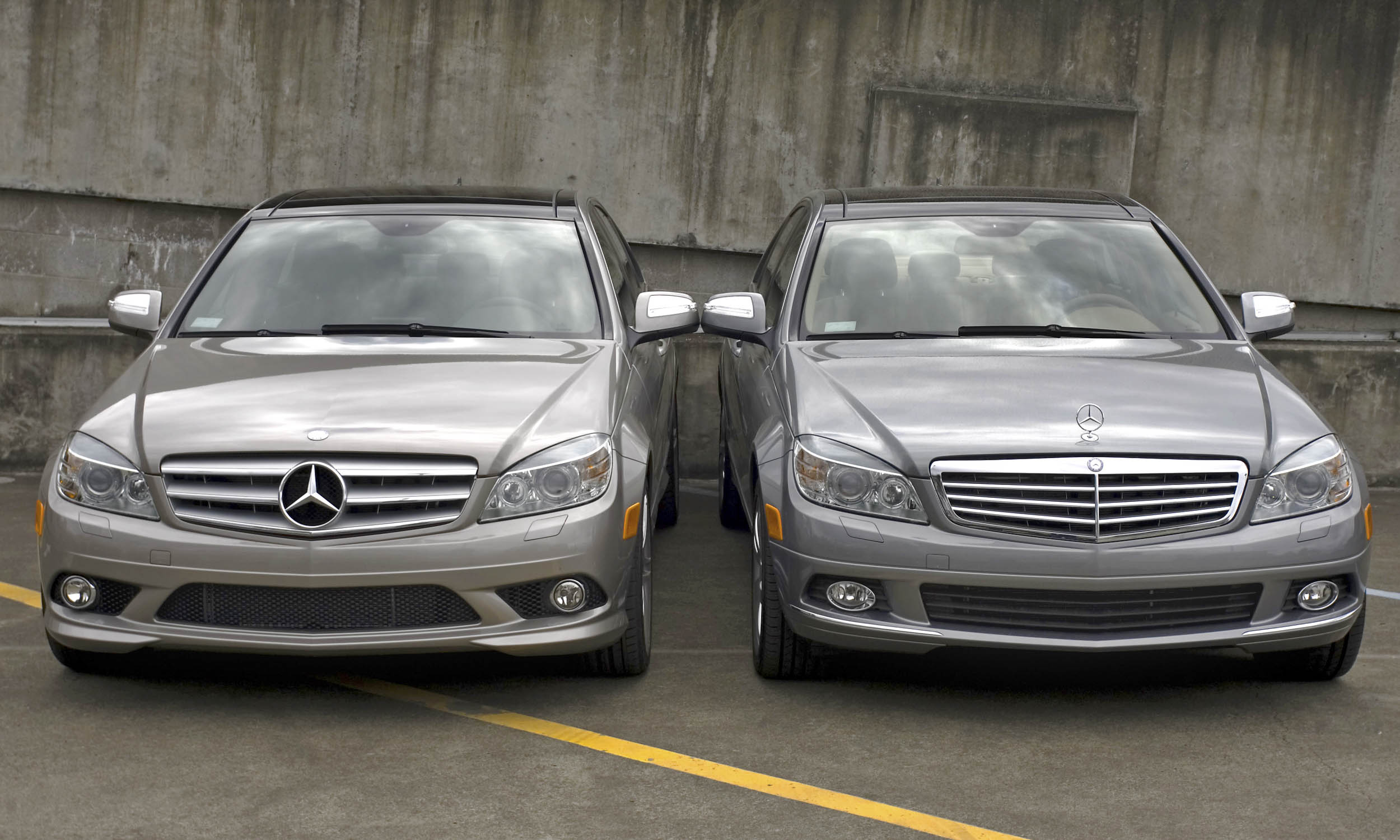 2008–11 Mercedes-Benz C-Class
Original MSRP: $31,600 – $58,200
Until the CLA was introduced in 2014, the C-Class was the easiest way to become a Mercedes owner. When the C-Class was redesigned for the 2008 model year, Mercedes offered the upscale sedan in Luxury and Sport trims, each with distinct interior and exterior styling. The C300 with rear- or 4matic all-wheel drive is the most common C-Class you’ll find in our budget; however, you might be able to locate the more powerful C350. Mercedes also offered the 451-horsepower C63 AMG, but it’s unlikely that one is available for under $20,000. 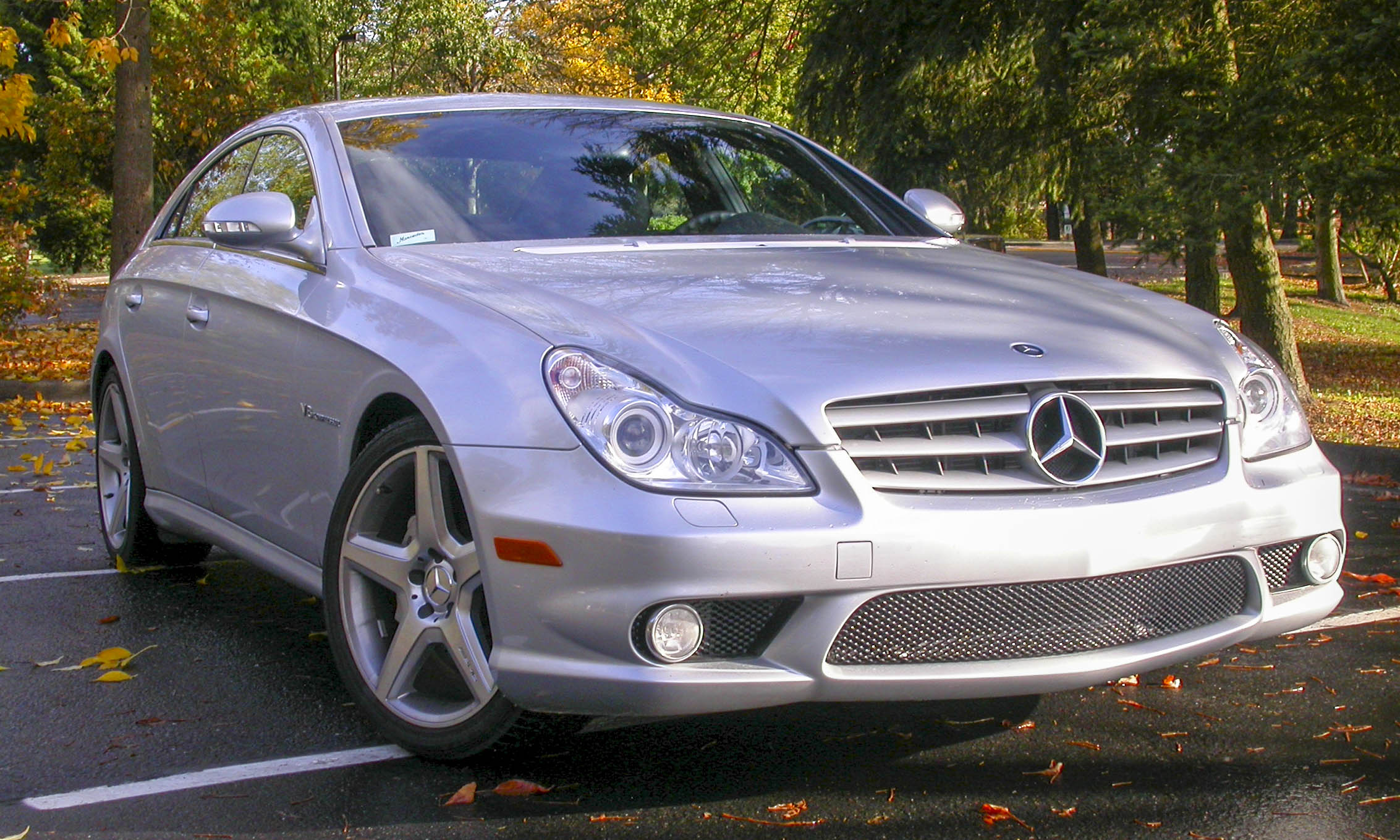 2006–07 Mercedes-Benz CLS-Class
Original MSRP: $64,900 – $92,200
When Mercedes debuted the CLS for the 2006 model year, the company introduced the idea of a 4-door coupe — a sedan with coupe-like styling. One of the most beautiful cars on the road at the time, the CLS offered plenty of room in its luxurious cabin; however, the sleek roofline does limit headroom in the rear seat. The 2006 CLS is the most common on the used-car market for under $20,000. That said, for 2007 Mercedes upgraded from the CLS500 to the CLS550, which increased horsepower from 302 to 382, so it may be worth holding out for the ‘07. 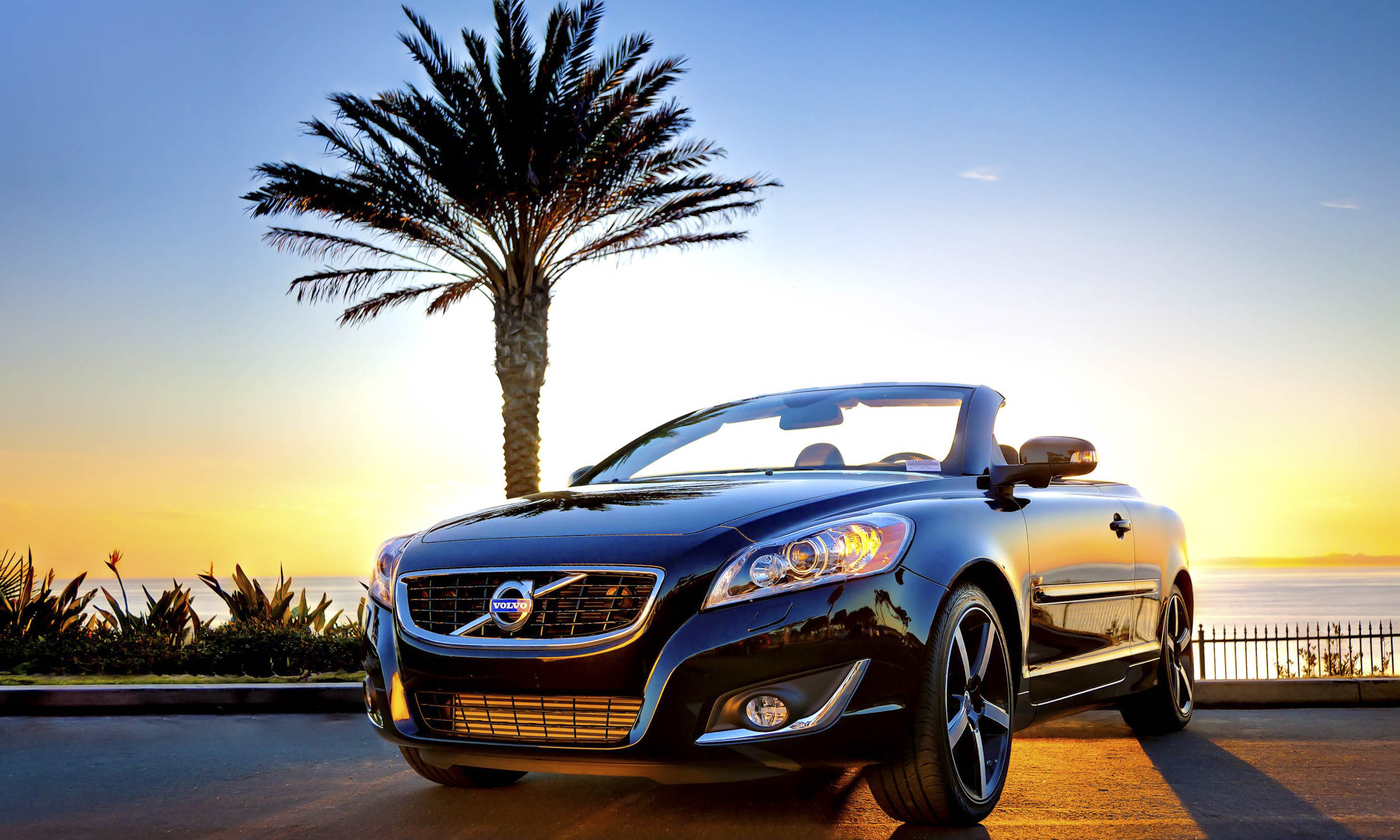 2011–12 Volvo C70
Original MSRP: $39,950 – $44,050
The Volvo C70 stands out as one of the only 4-passenger convertibles with a retractable hardtop. The last redesign of this luxury convertible was for the 2011 model year before it was discontinued in 2013. Power leather seats were standard, as was dual-zone climate control, Bluetooth connectivity and 17-inch alloy wheels; there were a number of options as well. As with most Volvos, seats are very comfortable. The only engine available was a turbocharged five cylinder putting out 227 horsepower. 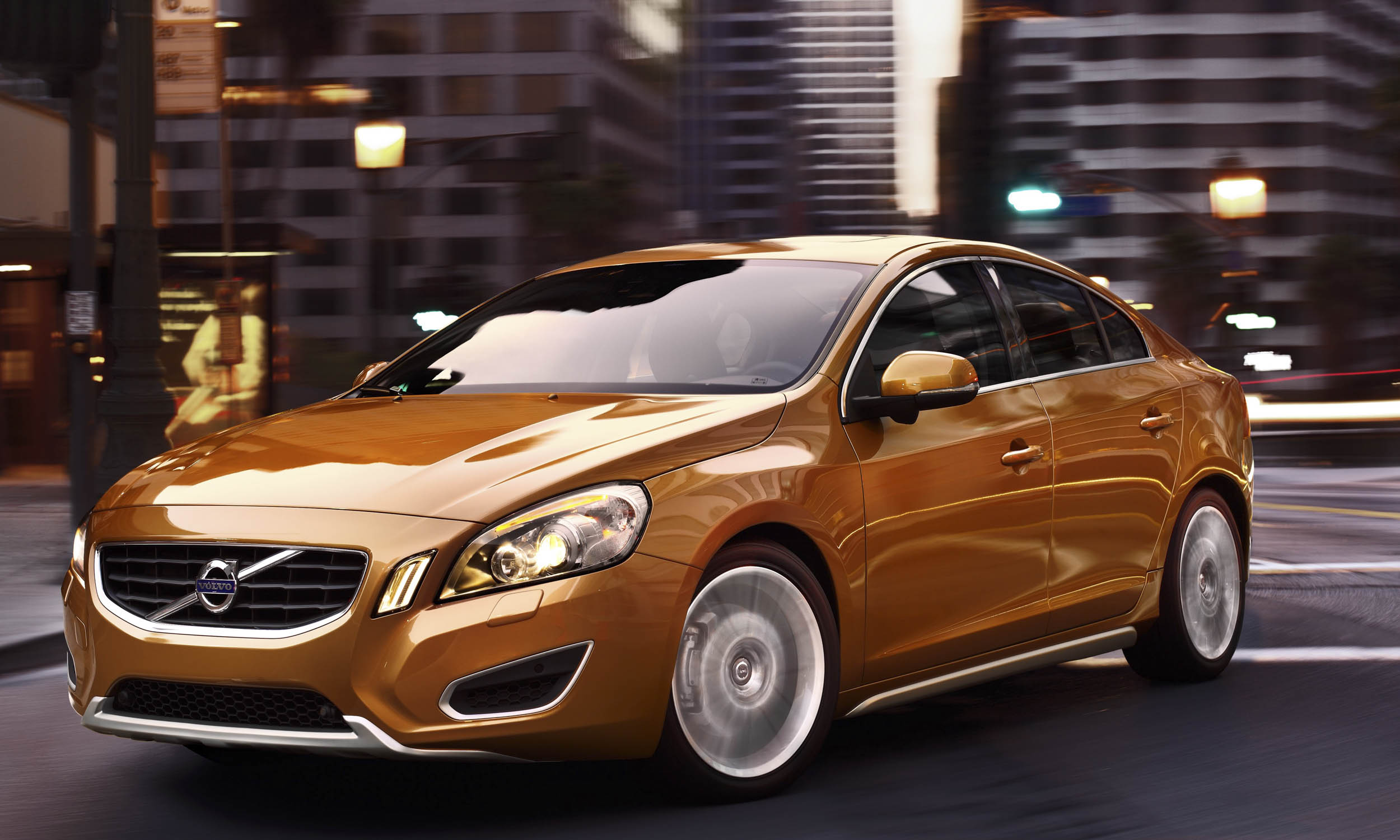 2011–13 Volvo S60
Original MSRP: $37,700 – $46,800
It was a bit of a stretch to call the S60 a luxury sedan until the redesign in 2011. In addition to its fresh styling, the S60 came well equipped with leather and aluminum interior trim, sport seats, HD radio, Bluetooth connectivity, 18-inch alloy wheels and a sport-tuned suspension. In 2011 the only engine available was the 300-horsepower inline 6-cylinder T6 teamed with full-time all-wheel drive. The T5 arrived for the following years, equipped with front-wheel drive, and this is the version most commonly found in used-car listings for under $20,000.