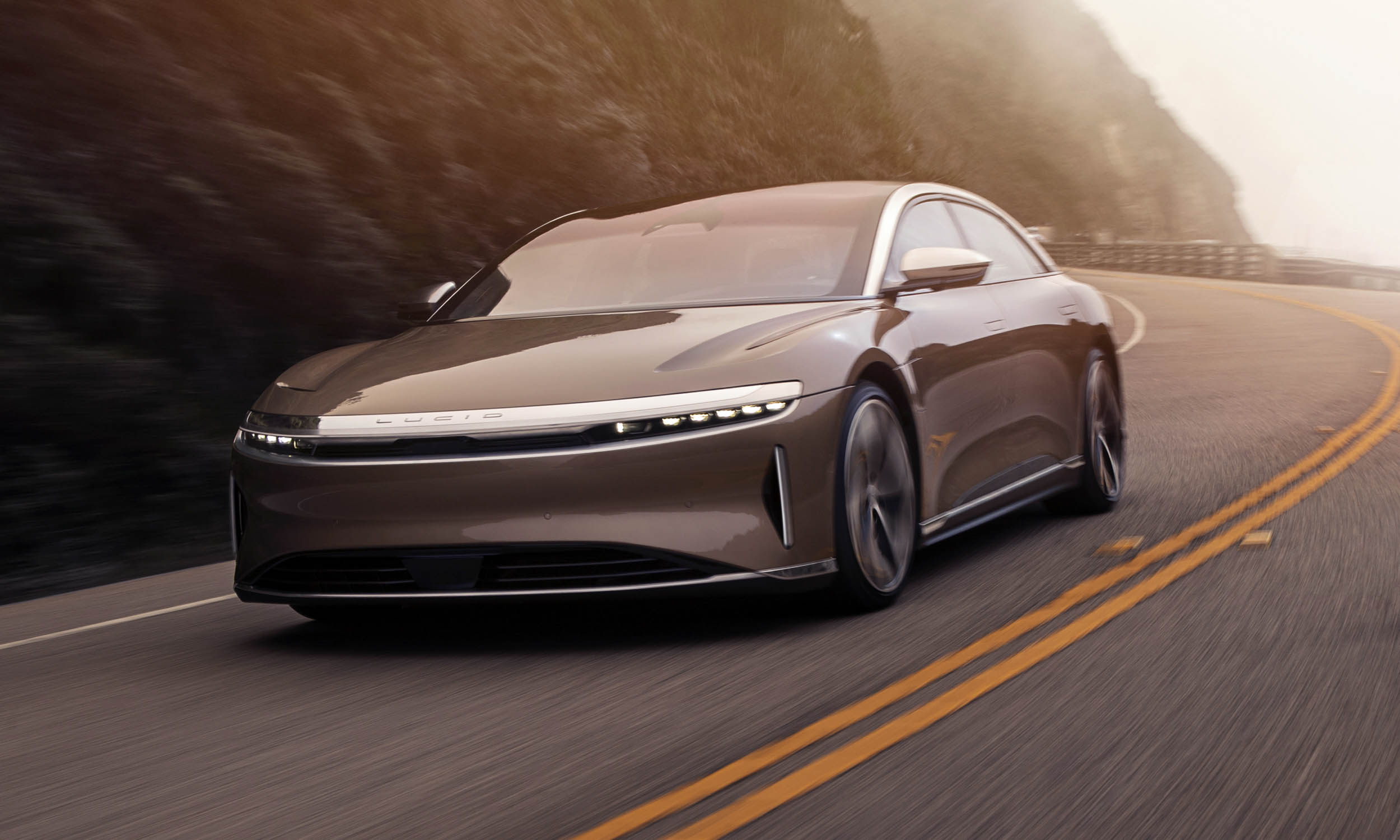 Lucid Motors Air
In the past few years, several new companies have popped up spouting promises to create powerfully efficient electric vehicles, and most have done nothing more than reveal a few prototypes. The exception to this rule seems to be Lucid Motors. Recently the California-based company took the wraps off its first production model, the Lucid Motors Air. With impressive performance and range, this fully electric high-performance luxury sedan will start below $80,000 and compete directly with the products of another American luxury EV company — Tesla Motors. 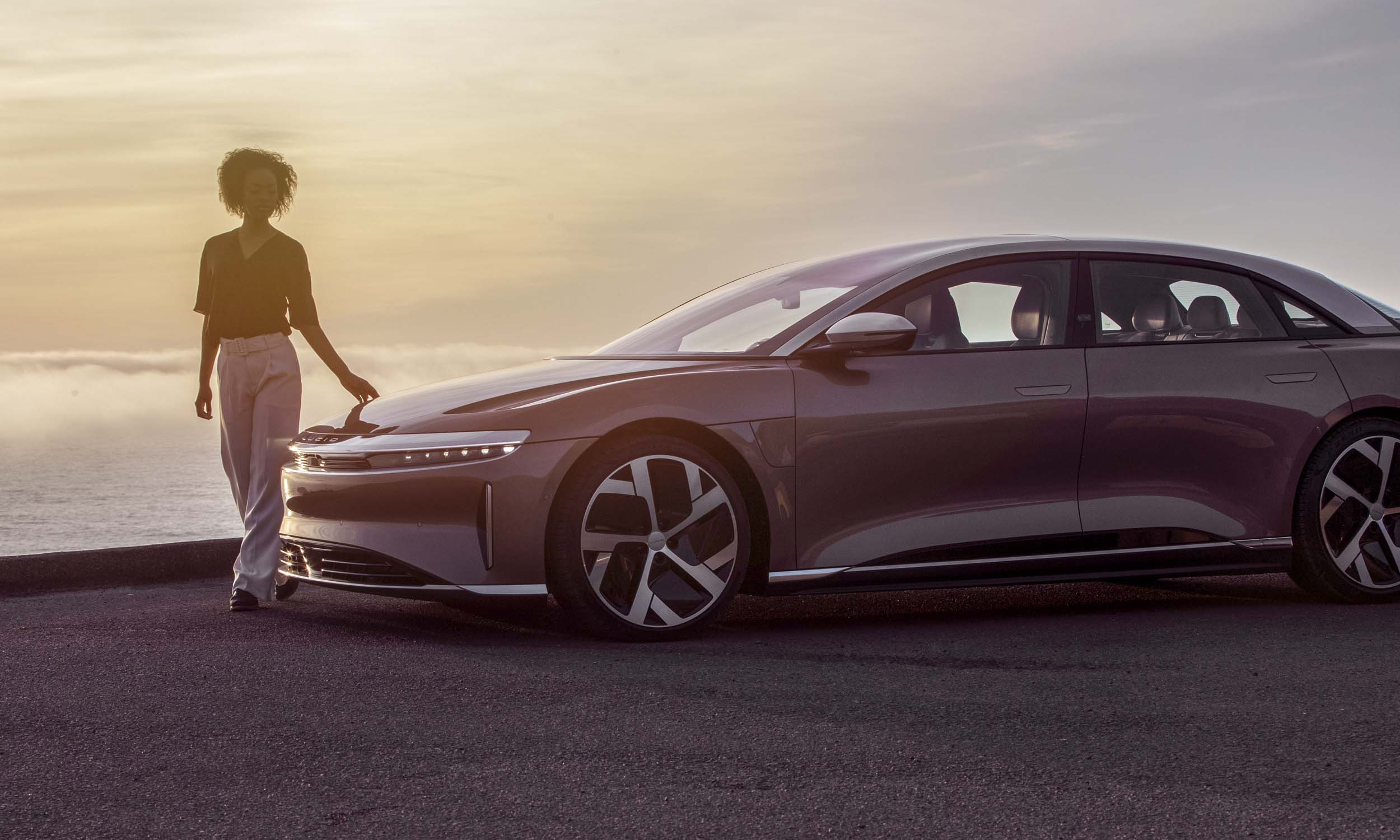 Pushing Boundaries
“Lucid Motors is driven to make the electric car better, and by doing so, help move the entire industry forward towards accelerated adoption of sustainable mobility. The goal of this relentless approach to developing the world’s most advanced electric vehicle is to . . . attract new customers to the world of EVs,” said Peter Rawlinson, CEO and CTO of Lucid Motors. “With the Lucid Air, we have created a halo car for the entire industry, one which shows the advancements that are possible by pushing the boundaries of EV technology and performance to new levels,” noted Rawlinson. 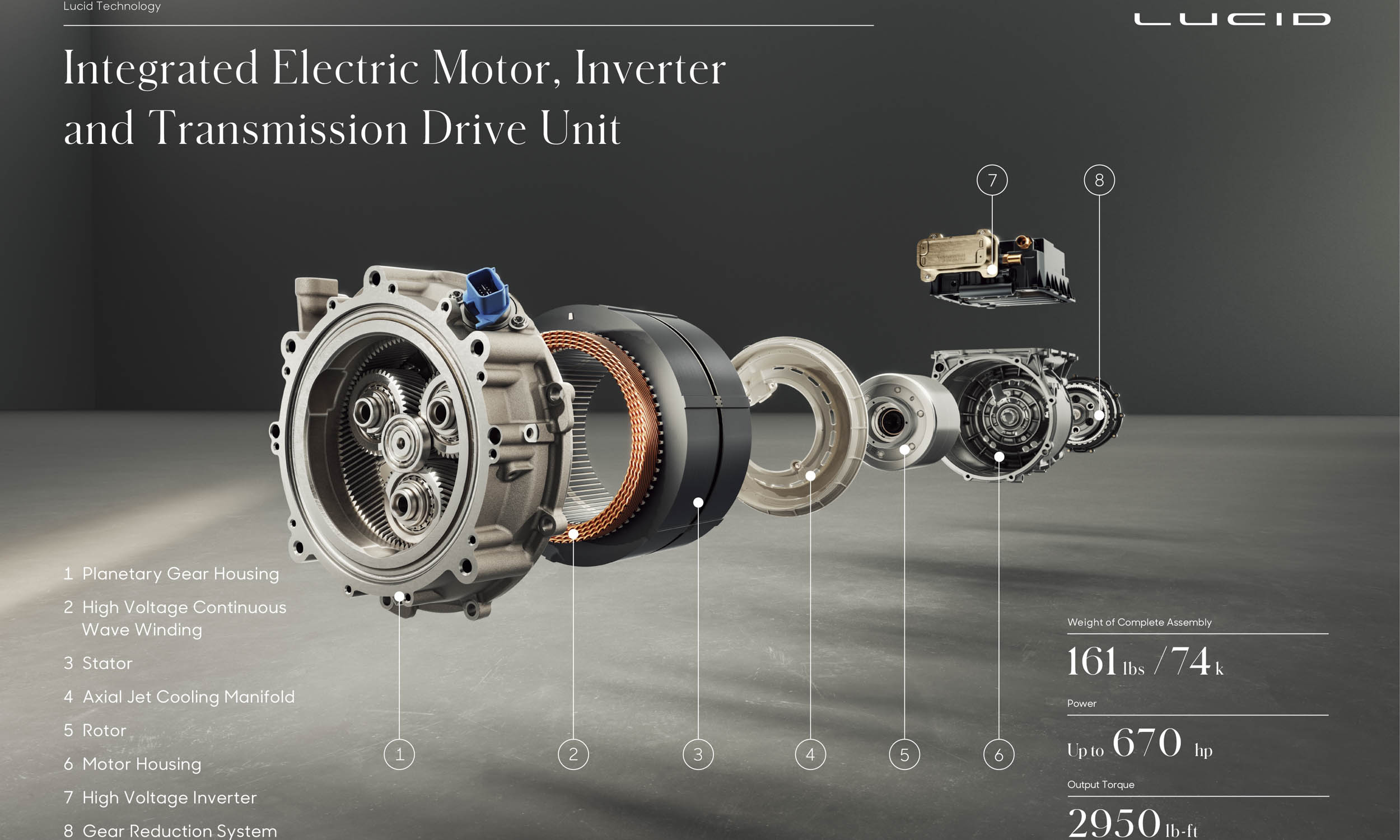 Powertrain
Engineers at Lucid Motors developed the Air’s electric drivetrain in-house, and it boasts some impressive stats. The ultra-efficient permanent magnet electric motor is integrated with an inverter, transmission and differential to create a 900V+ drive unit that weighs a mere 161 pounds. According to Lucid, the unit could fit in a standard suitcase. Each drive unit generates up to 670 horsepower and almost 3,000 lb-ft of torque. Given their compact size up to three units could be employed to power the Air. 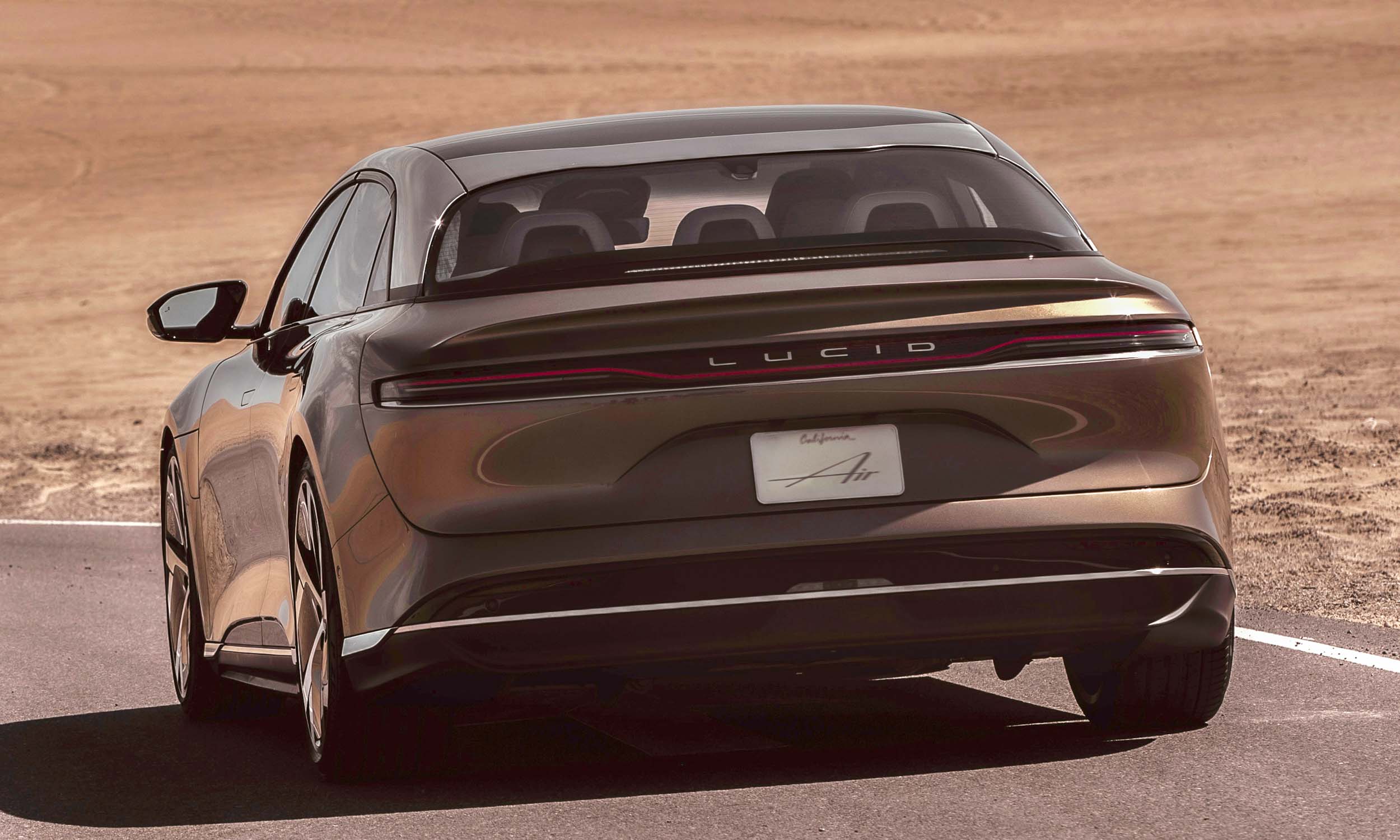 Extreme Performance
When the Lucid Air arrives, it will be available with up to 1080 horsepower in a dual-motor all-wheel-drive configuration. Acceleration to 60 mph takes 2.5 seconds. Lucid Motors says the new Air has the capability to eclipse a quarter mile in less than 10 seconds at a speed of 144 mph — fast, especially for a 5-passenger sedan. Driving range is expected to be as high as 517 miles, depending on the vehicle’s configuration. 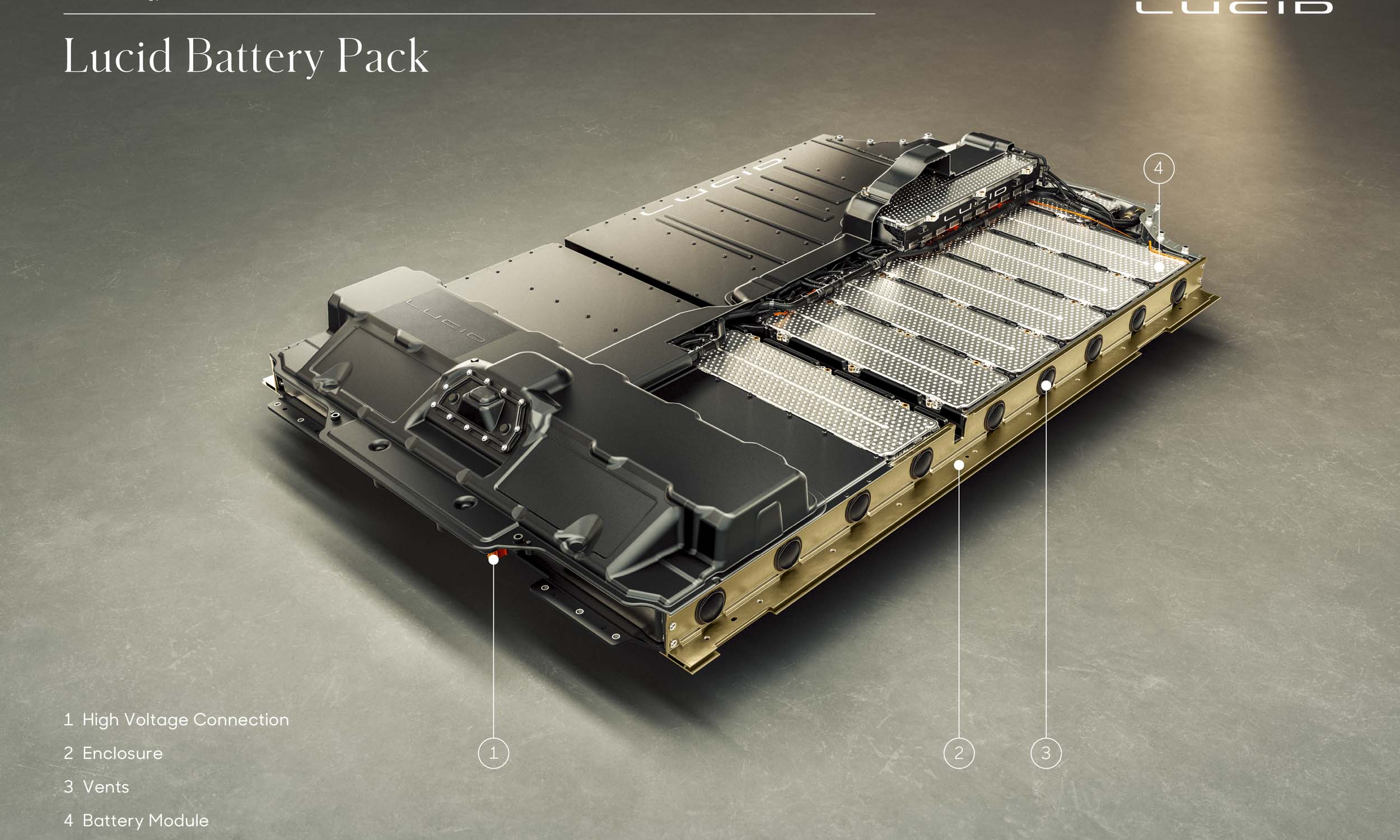 Batteries
Lucid’s Atieva technology division has considerable experience when it comes to battery design. The division is responsible for the design, development and manufacture of battery packs for all race cars competing in the all-electric Formula E series, and is in agreement to continue this relationship until 2022. The company took advantage of that experience when creating the compact 113 kWh battery pack for the Lucid Air. 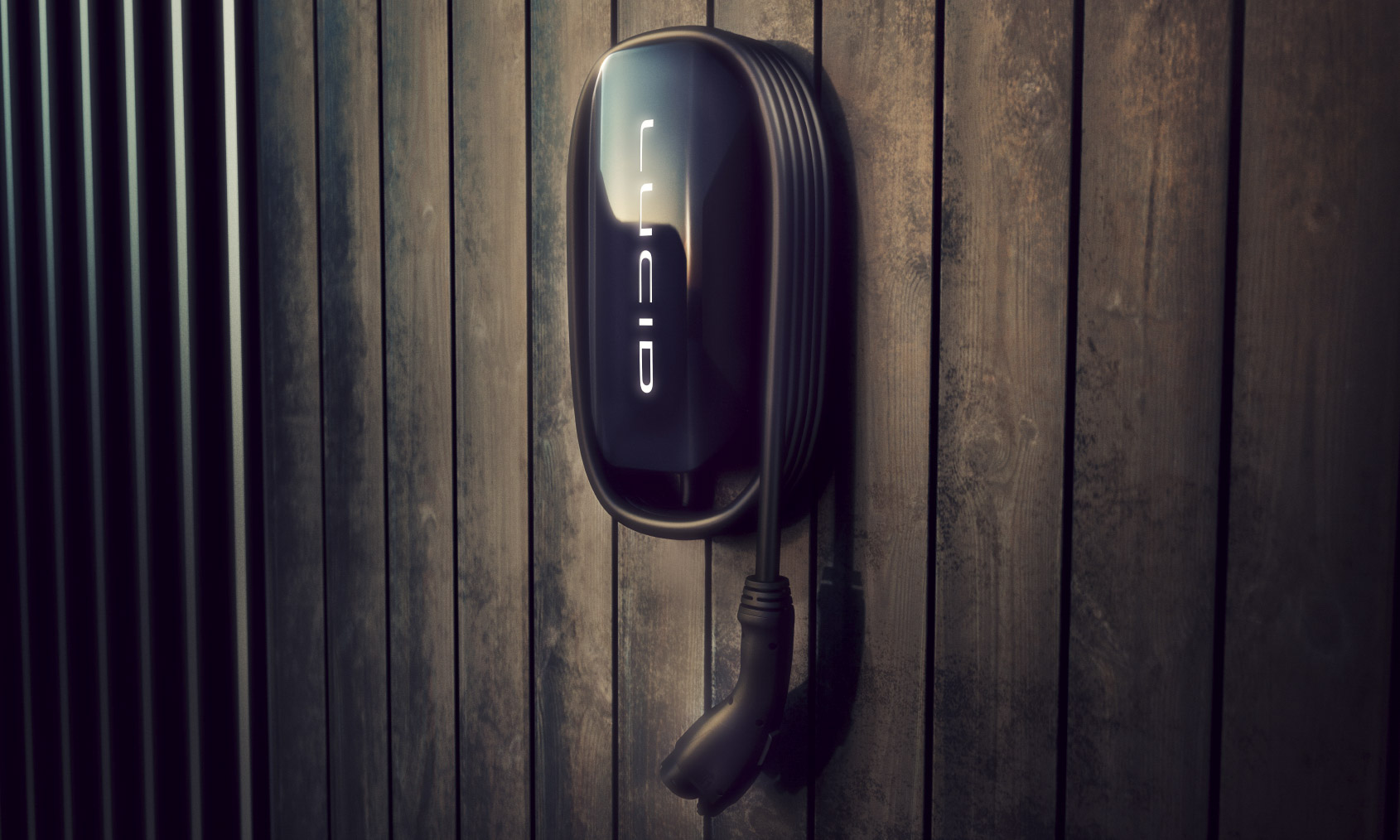 Charging
The time it takes to fully charge an electric vehicle is almost as important as its range, and Lucid says the Air has things covered. Using what the company calls its “Wunderbox” — an onboard charging unit designed to be compatible with a range of charging systems — the Air can charge at a rate of 20 miles in one minute or 300 miles in 20 minutes when plugged into a DC fast charger. 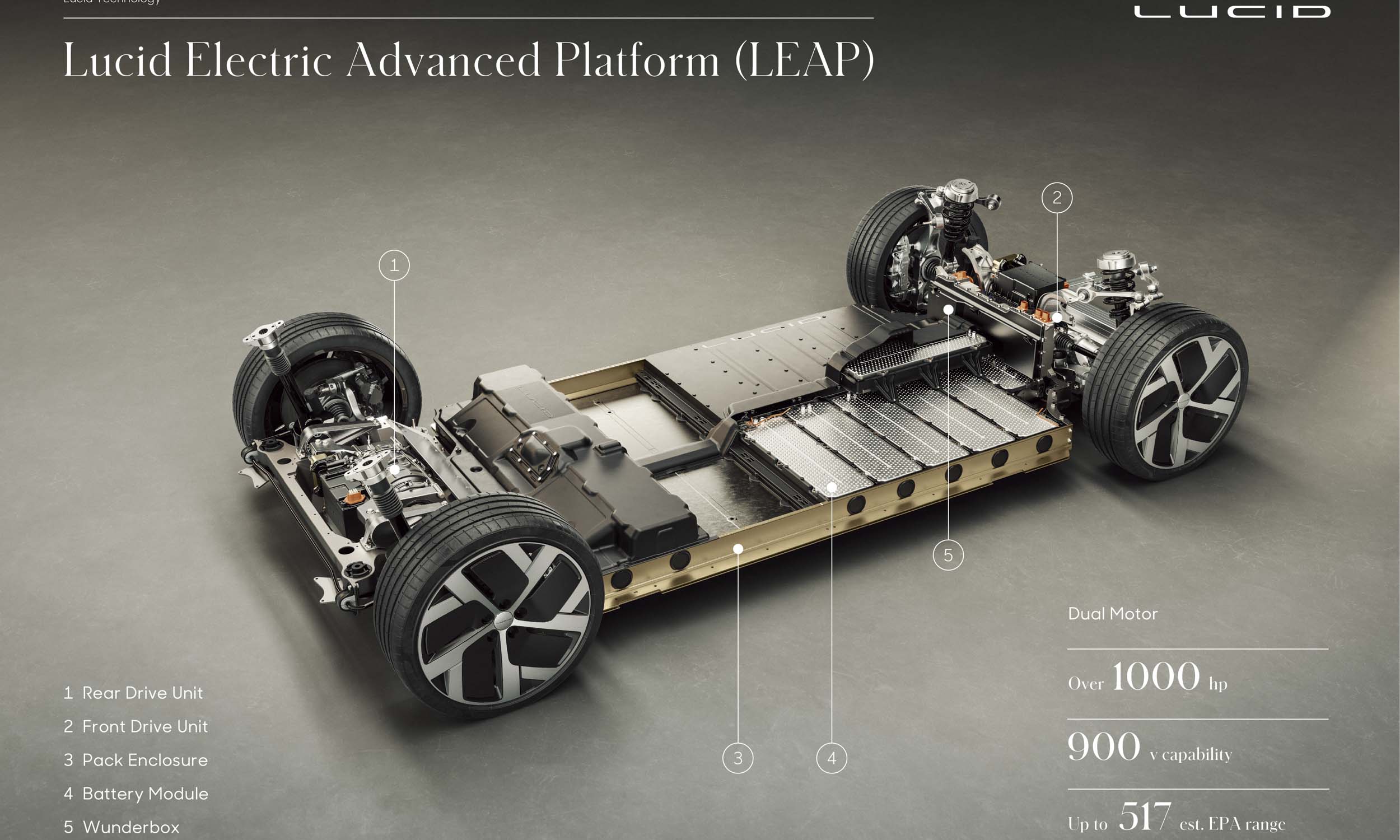 Advanced Platform
The foundation of the new Air is the Lucid Electric Advanced Platform. The car’s electric motors and batteries are integrated into a skateboard-like platform that enables a clean, versatile interior space without any drivetrain obstructions. This in-house platform will also be used in future models. 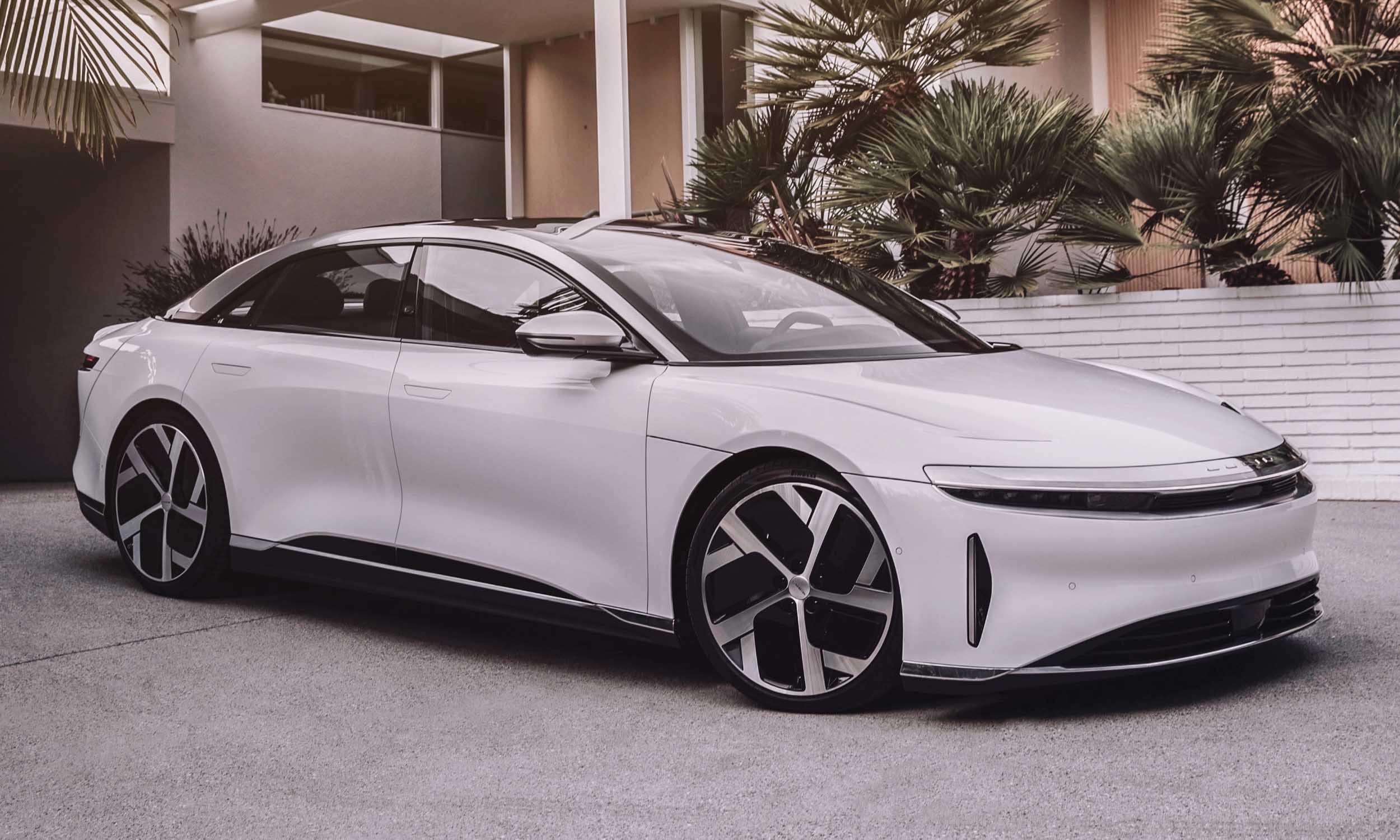 Technological Tour de Force
“When the Lucid Air comes to market next spring, the world will see that we have developed the best electric vehicle technology possible by a wide margin and effectively created a new benchmark for EVs,” enthused Rawlinson. “The result is nothing short of a technological tour de force in every facet upon which a luxury performance car is measured,” Rawlinson said. 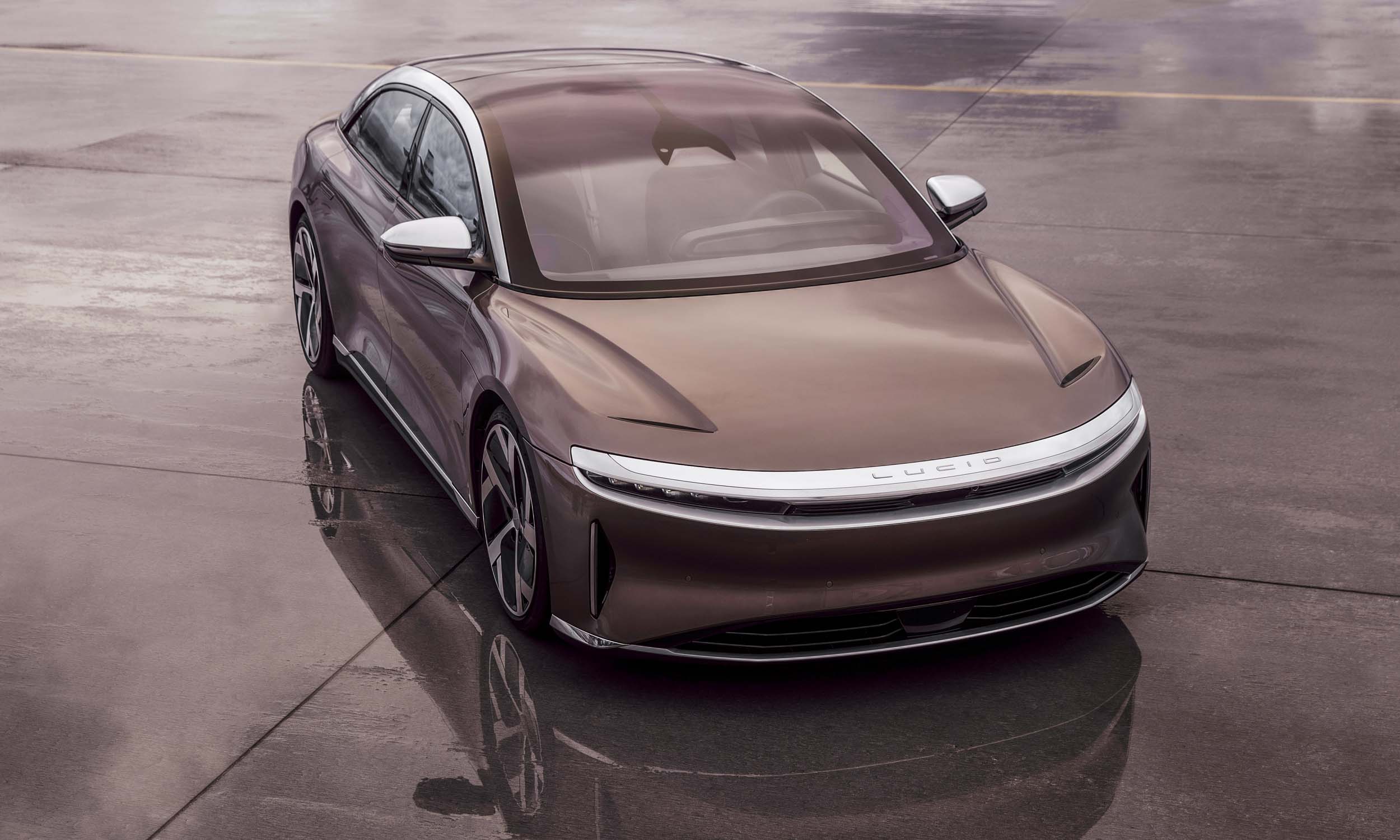 Futuristic Styling
The Lucid Motors Air has the looks to match its advanced powertrain, with clean styling up front emphasized by slim headlights and a chrome strip that spans from one corner to the other. The hood features sculpting over the wheels to further emphasize power, and the windshield flows as one piece of glass all the way back to the C-pillar. The sleek lines work well with the Air’s short overhangs and large wheels. This pleasing shape is also functional, providing a low coefficient of drag at a mere 0.21. 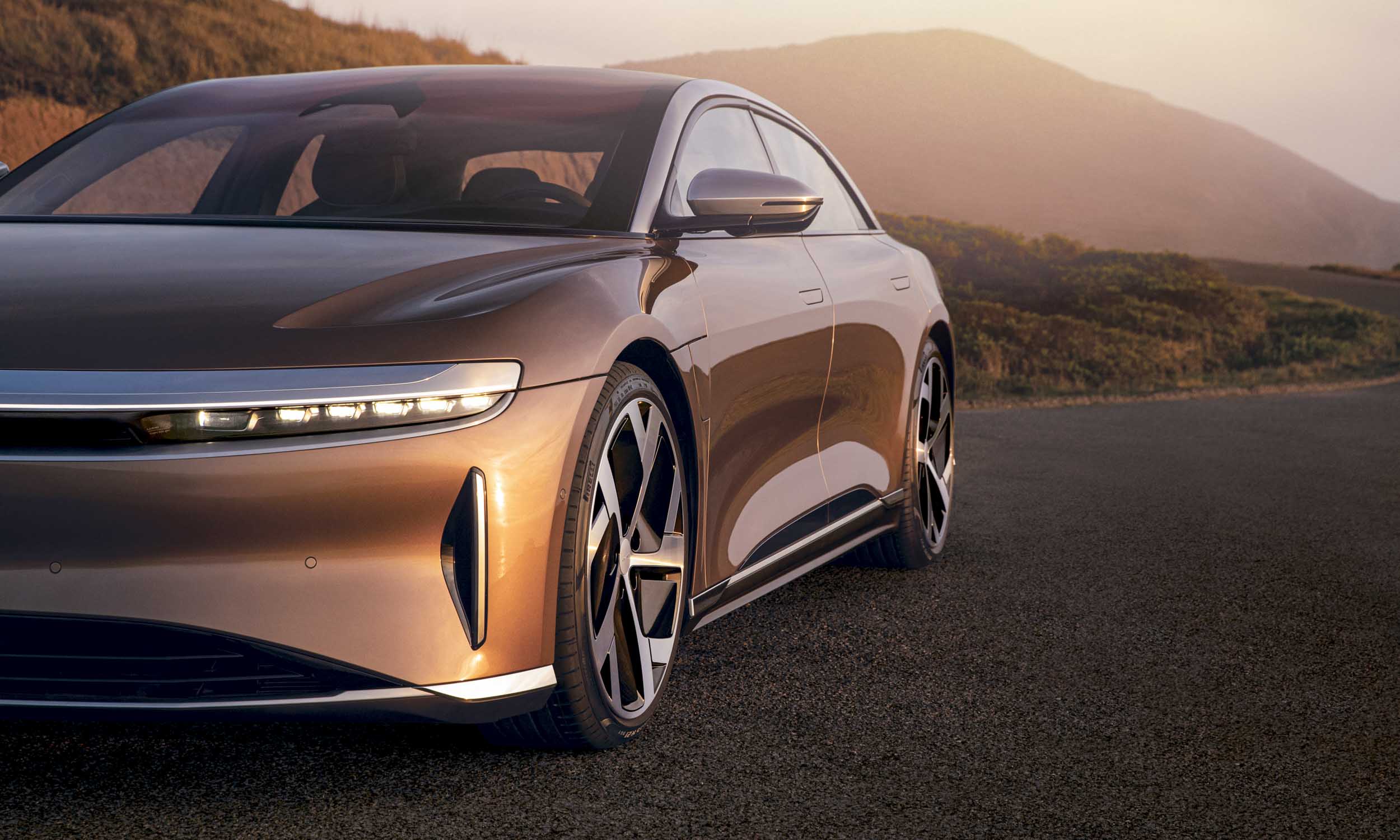 Headlights
Lighting the way for the Lucid Air is a unique Micro Lens Array system employing thousands of “light channels.” According to the company, this proprietary light design “provides the brightest, most precise and advanced lighting system ever.” Each channel can be digitally directed to improve visibility. 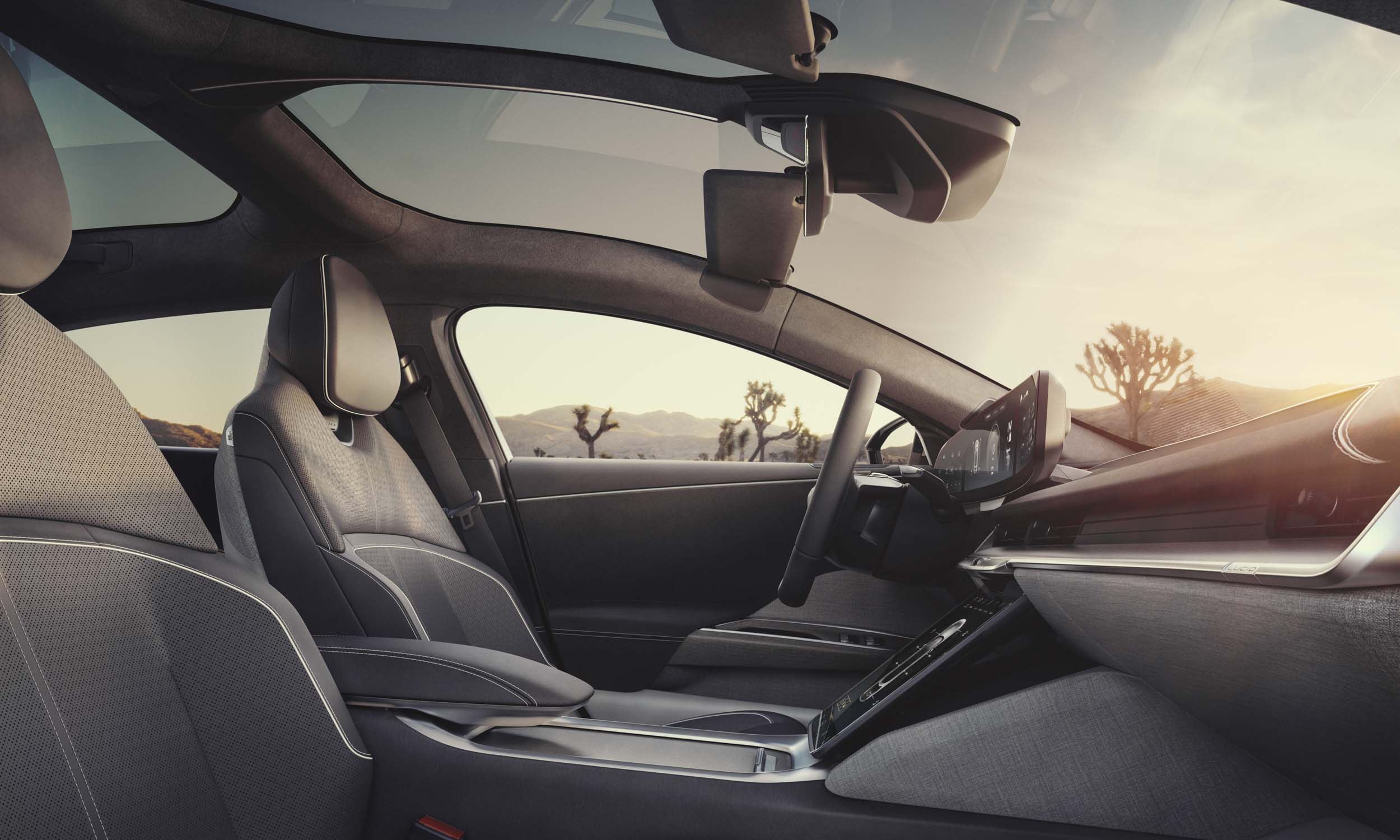 Wide Open Spaces
Taking advantage of the Air’s skateboard platform, Lucid designers created a cabin that ends up being much more spacious than expected from a sedan of this size. Both front and rear seats offer plenty of room, further enhanced by the Canopy Glass Roof. 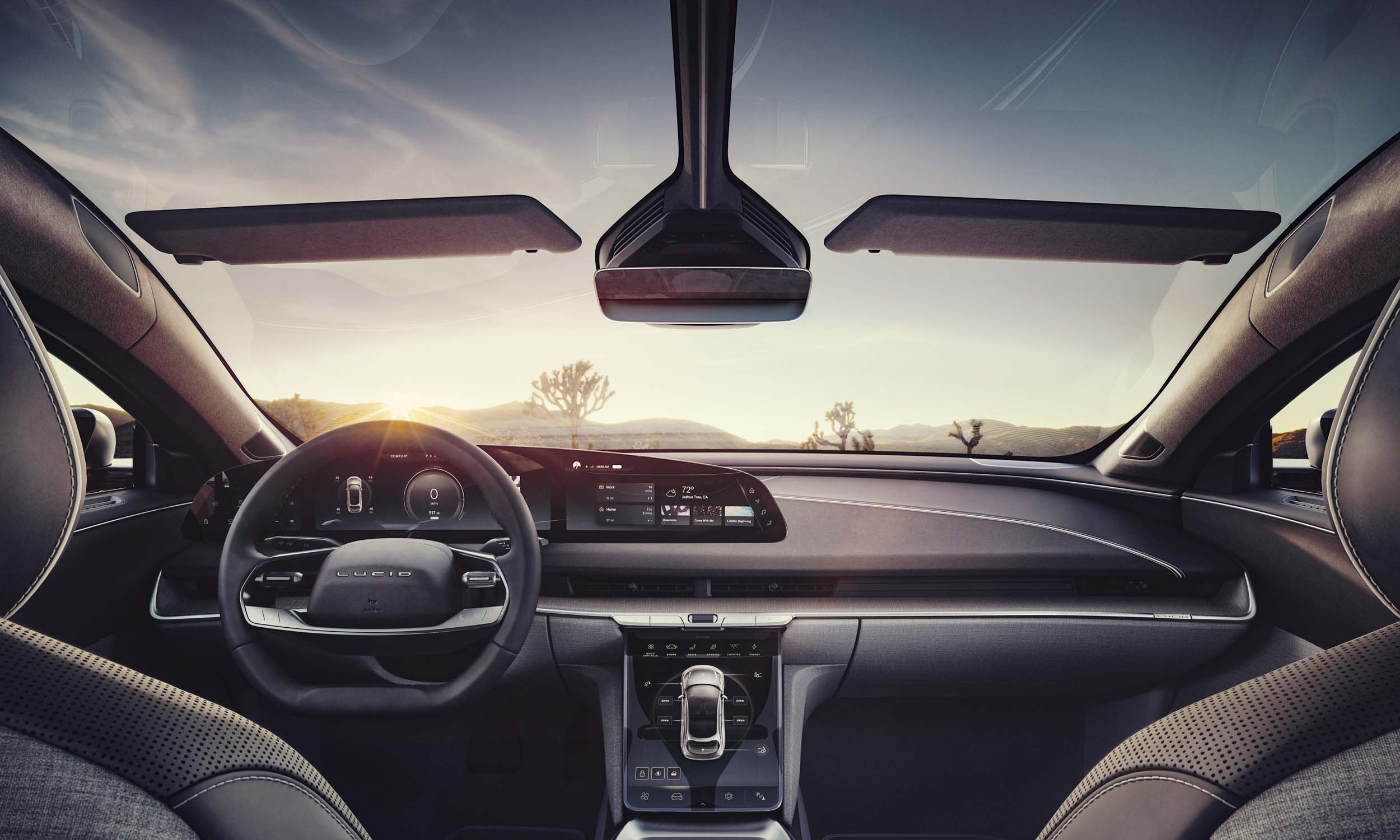 Advanced Technology
A 34-inch curved 5K display in front of the driver seems to float above the dashboard. Divided into sections, the center and far left provide information and controls for the driver, while the far right section is devoted to the infotainment system. 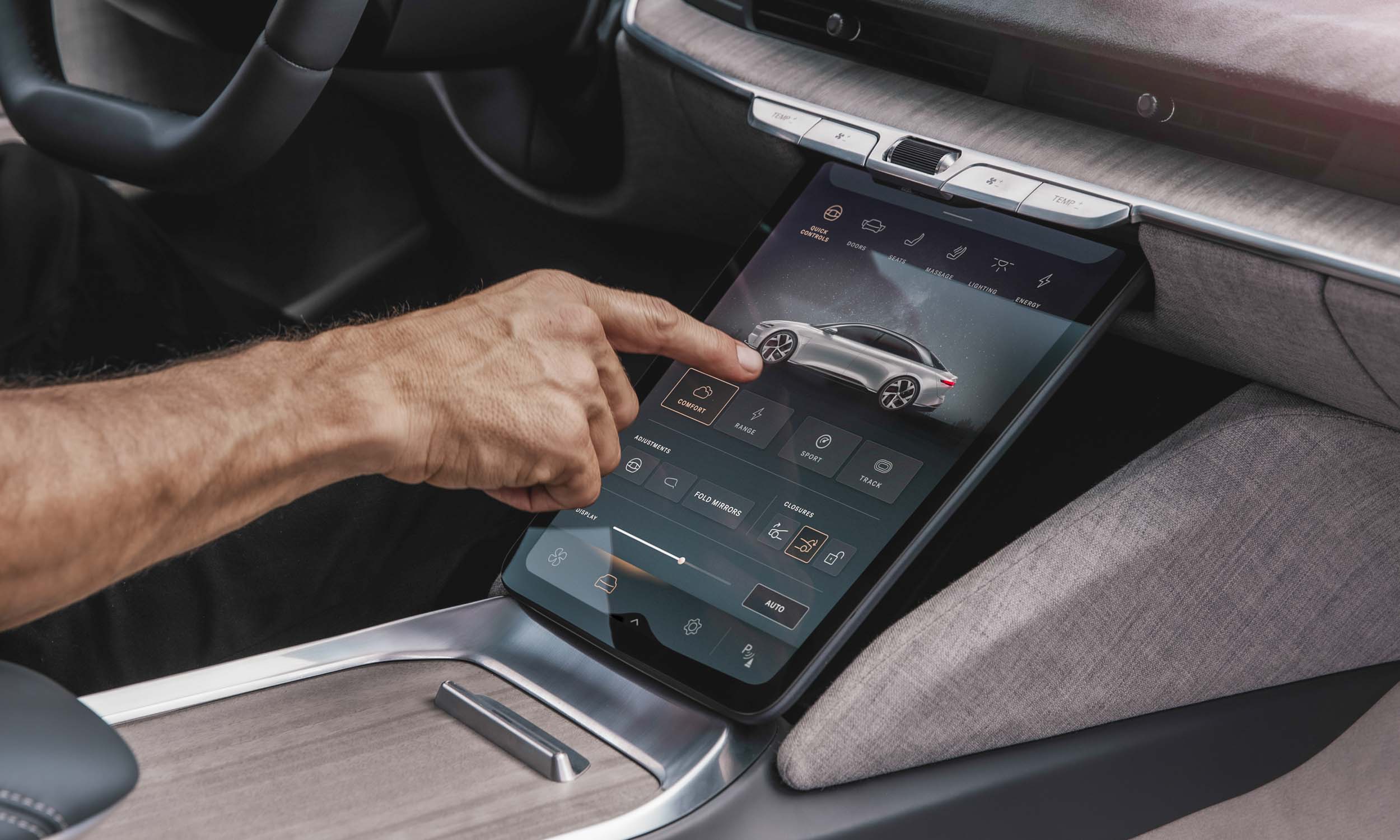 Second Display
An additional Pilot Panel display sits between the front seats within easy reach of both driver and passenger, providing additional controls for vehicle functions. This panel retracts to reveal a hidden storage space. 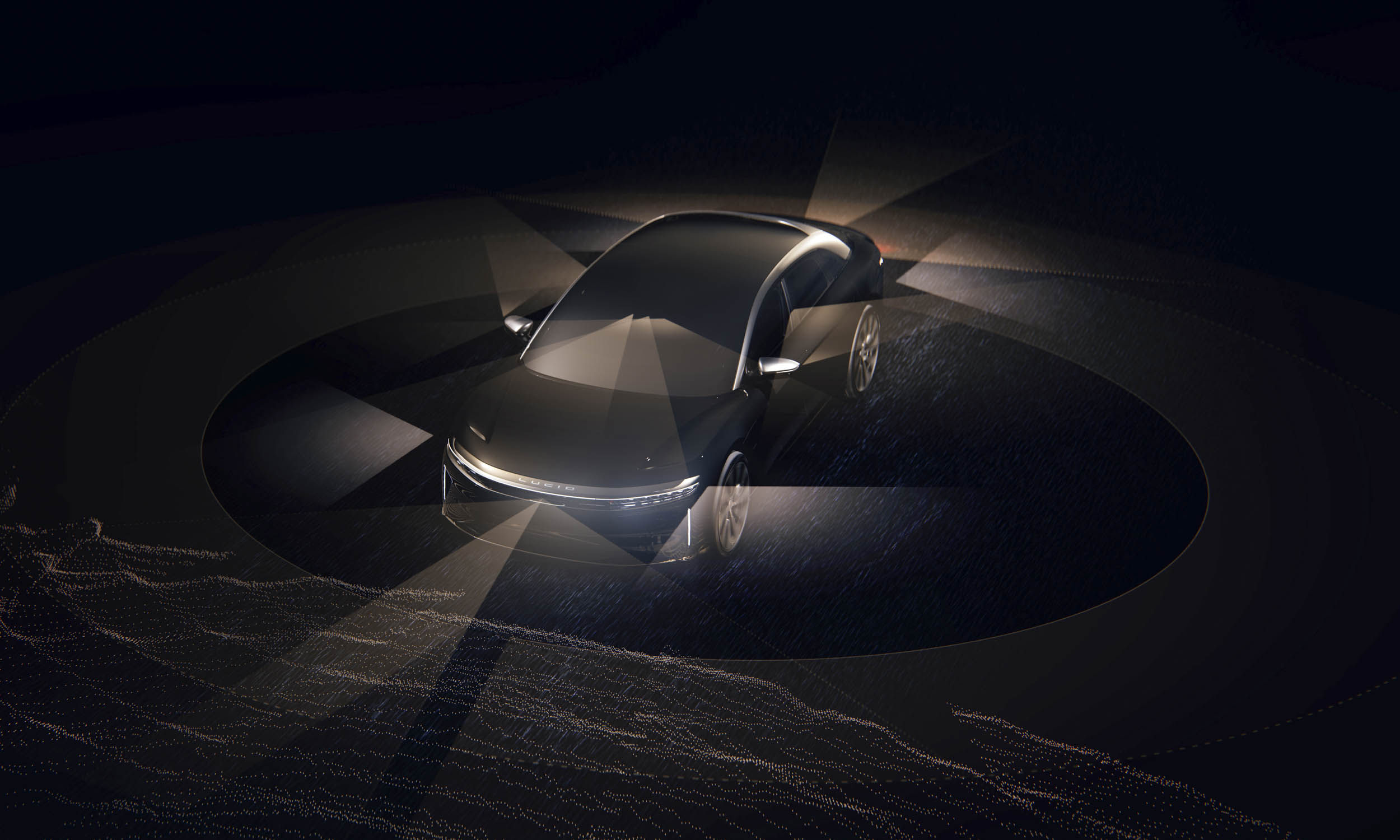 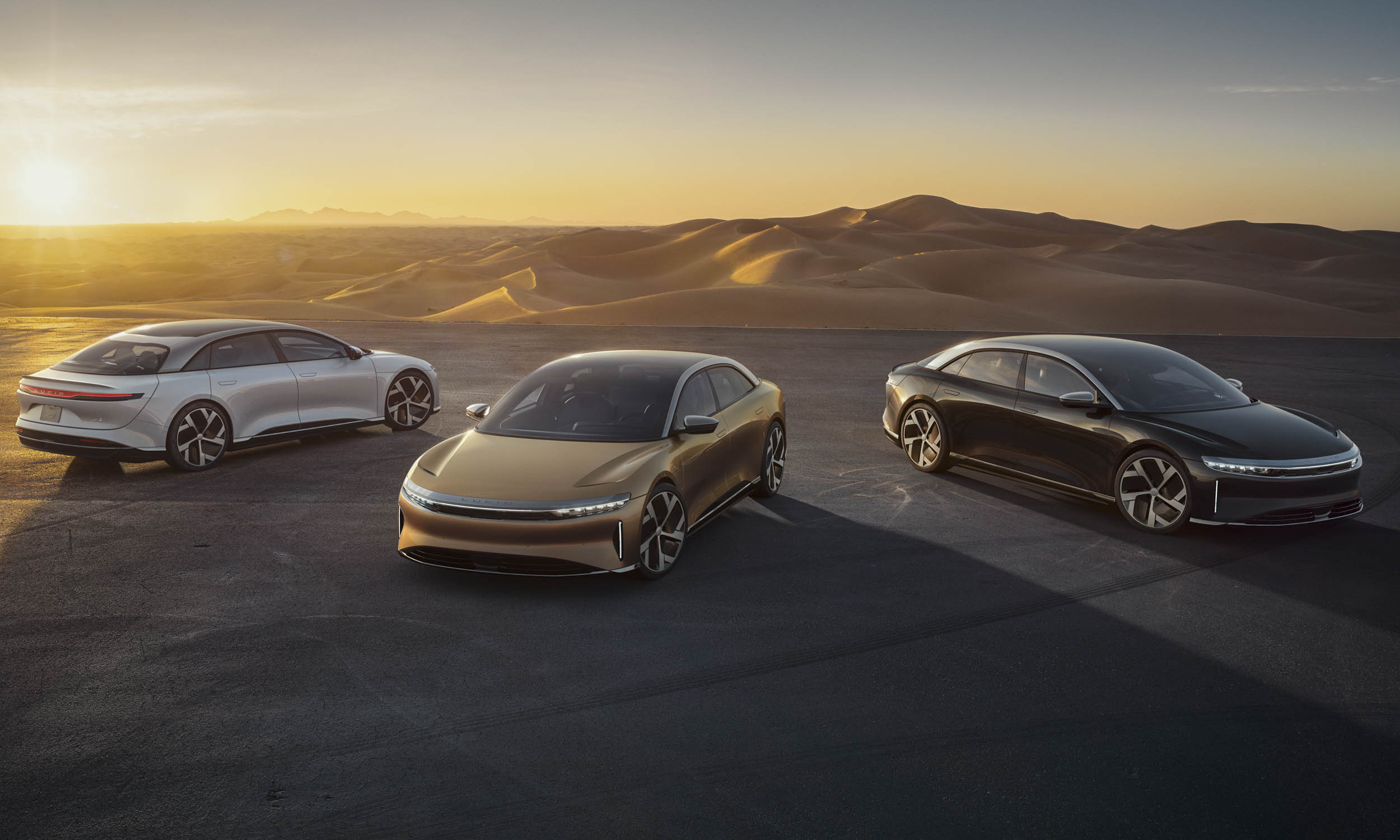 Model Range
The Lucid Air will ultimately be available in four trim levels, ranging from the entry-level Air to the fully loaded Air Dream Edition. The Dream Edition and Grand Touring will be the first to arrive sometime in spring of 2021, followed by the Touring in the fourth quarter of 2021 and the Air in 2022. 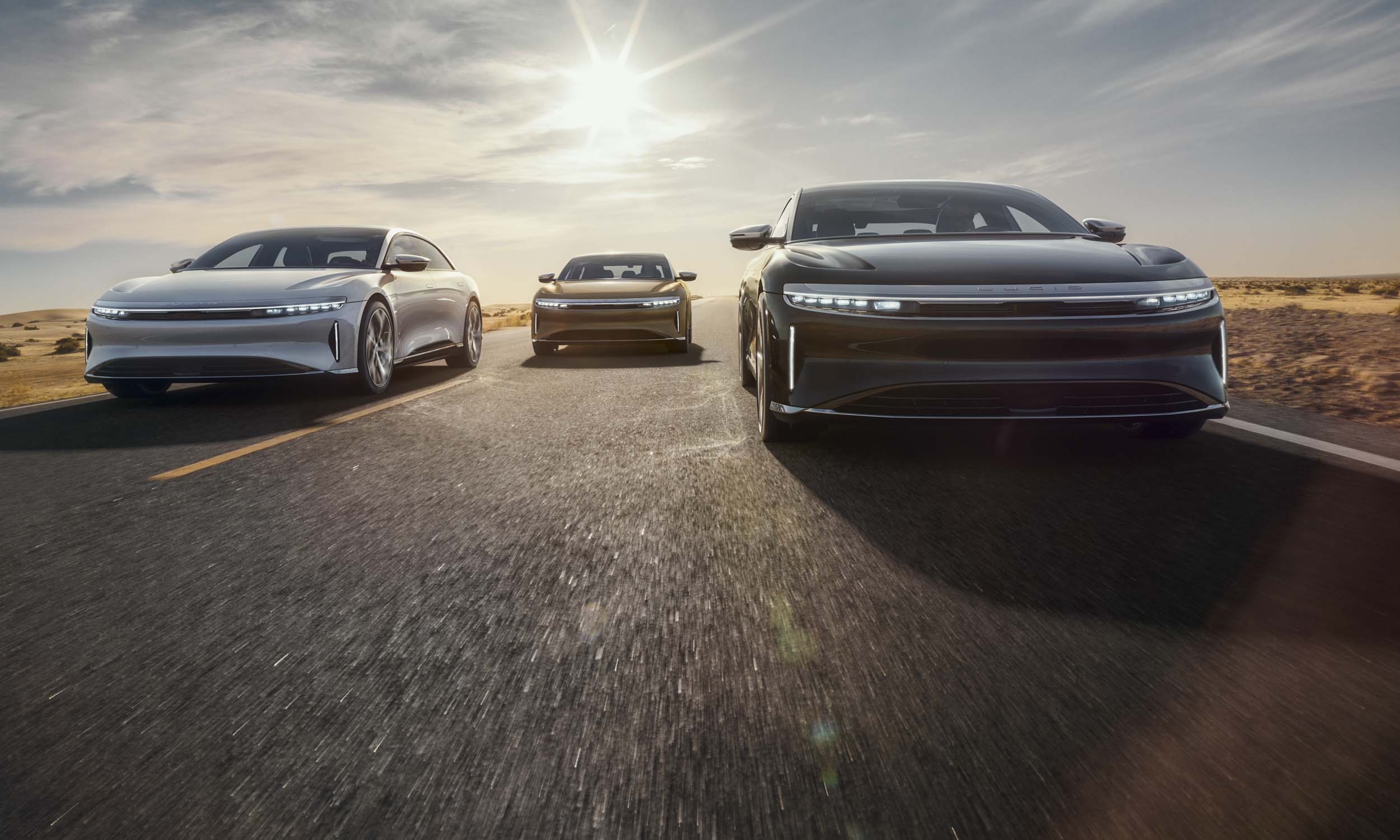 Lineup Details
More details regarding the rest of the Air lineup will be forthcoming; however, Lucid has said the Grand Touring will be priced at $139,000 and have 800 horsepower as well as a range of up to 517 miles. The Touring starts at $95,000 and will have 620 horsepower and a range of 406 miles. 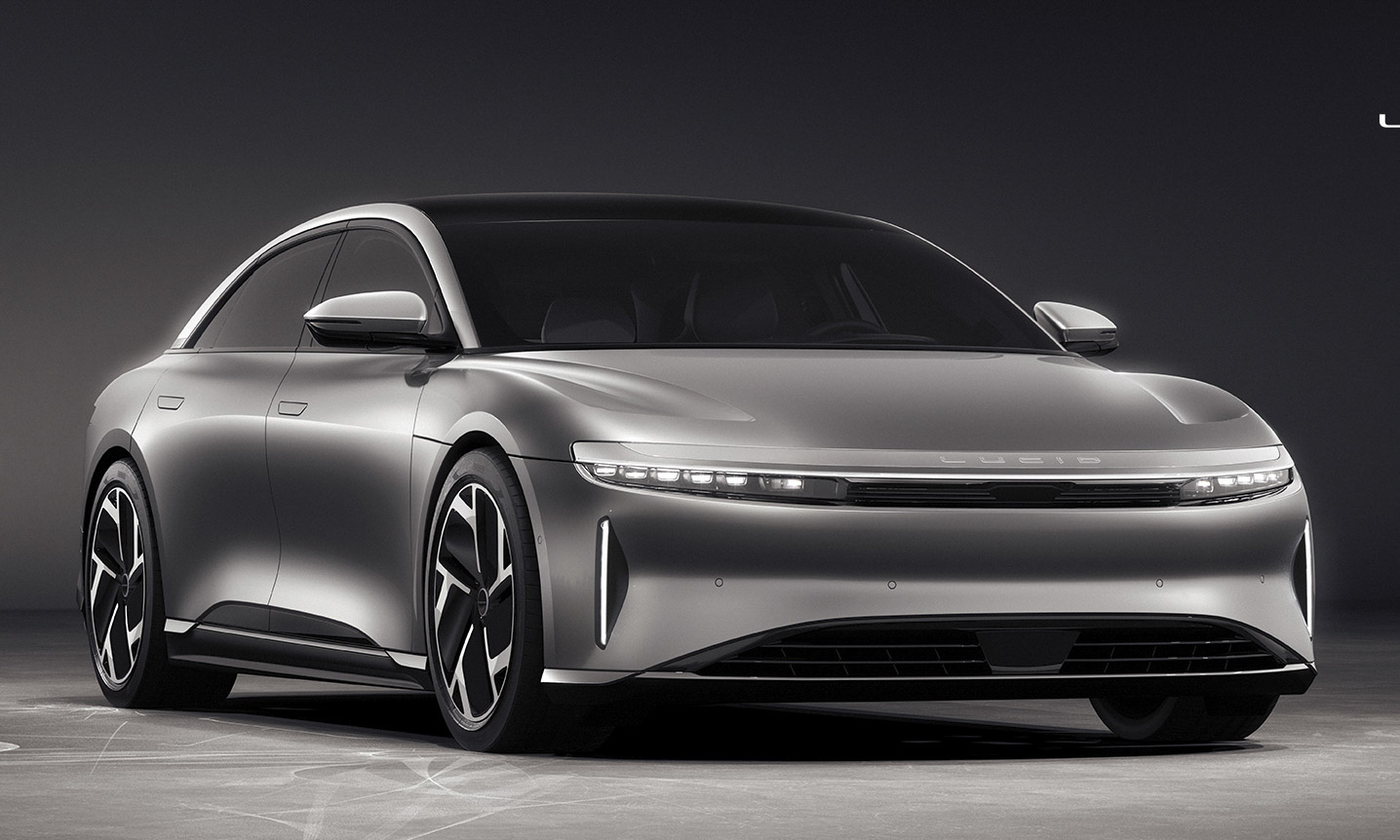 Starting at $77,400
The entry-level Lucid Air will be well equipped and priced at $77,400 — $69,900 after applying a $7,500 federal tax credit. The single-motor powertrain delivers 480 horsepower with an estimated 406 miles of range on a single charge. Even this entry-level model gets equipped with the 34” curved, floating display as well as the largest frunk (front trunk) ever in an electric sedan. 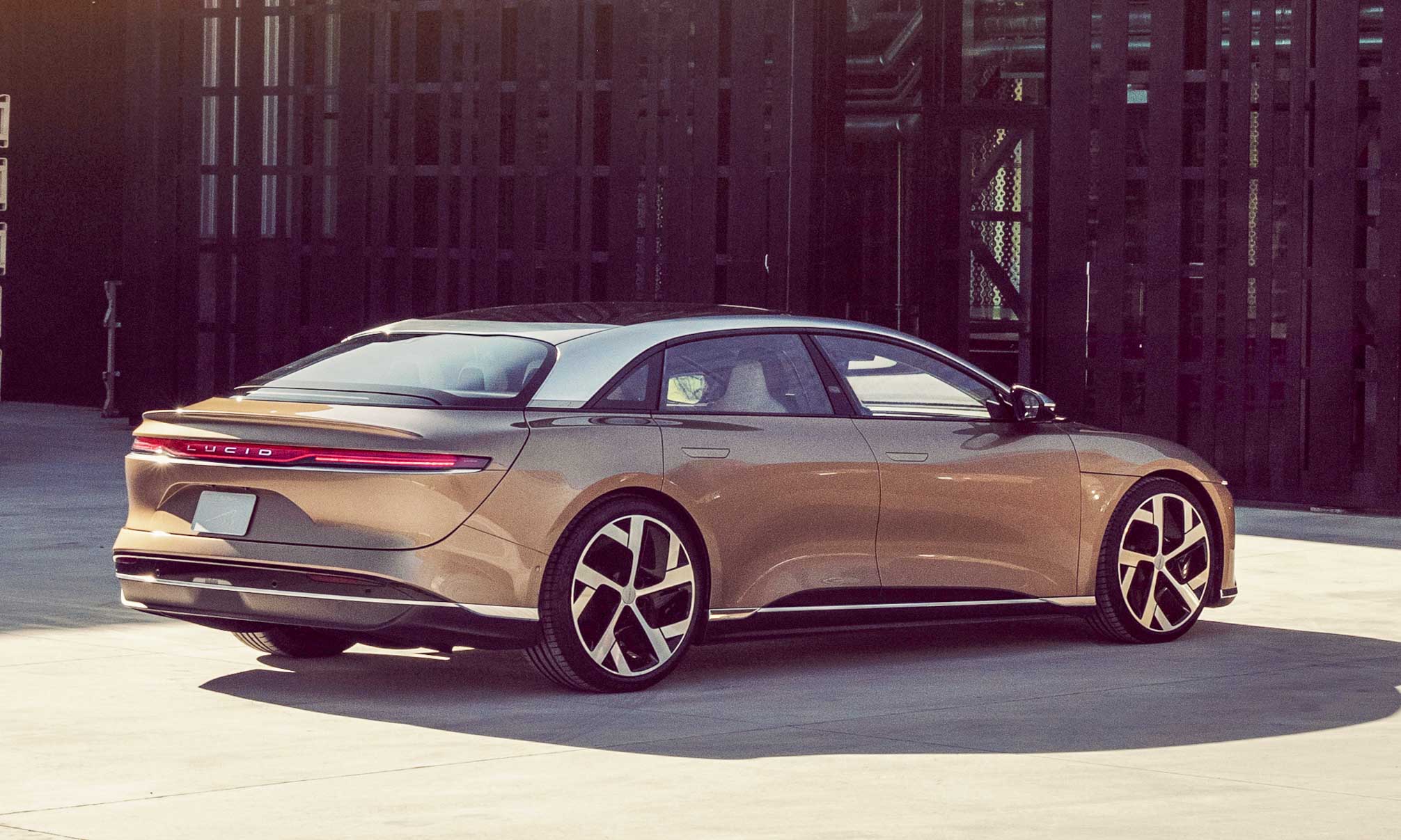 Lucid Air Dream Edition
With a base retail price of $169,000, the top-level Dream Edition will be equipped with the 1080-horsepower powertrain and have a range up to 503 miles. The interior gets trimmed in Nappa grain Bridge of Weir leather with silvered Eucalyptus wood. Available in Stellar White, Infinite Black, or Eureka Gold, this limited-edition variant stands out via 21-inch AeroDream wheels and special badging. 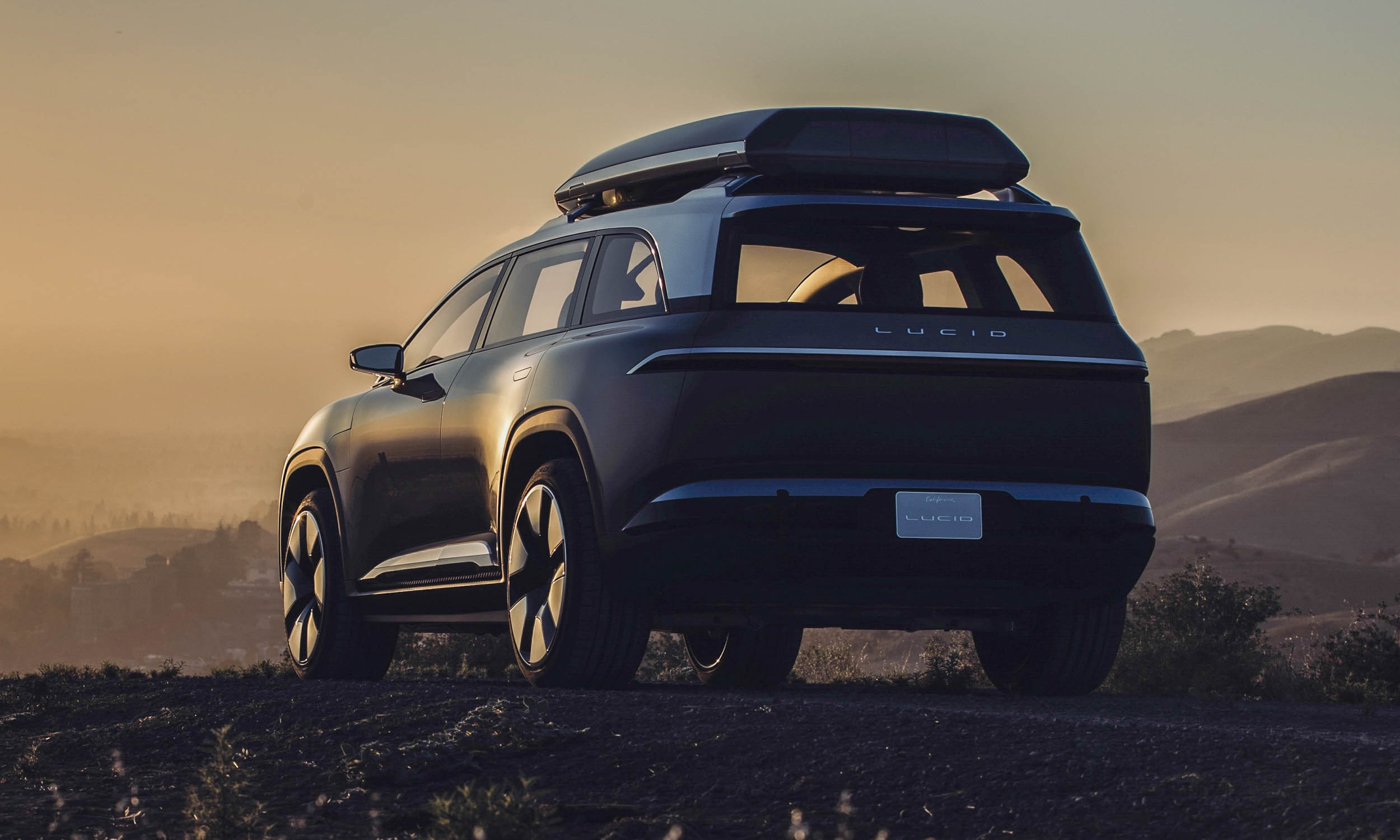 Plans for Future
Lucid has also announced plans to add a second vehicle to the lineup — an SUV called the Lucid Gravity. This stylish addition will be based on the same vehicle architecture as the Air with similar styling cues. No official word has come yet regarding the timing for Gravity’s arrival. 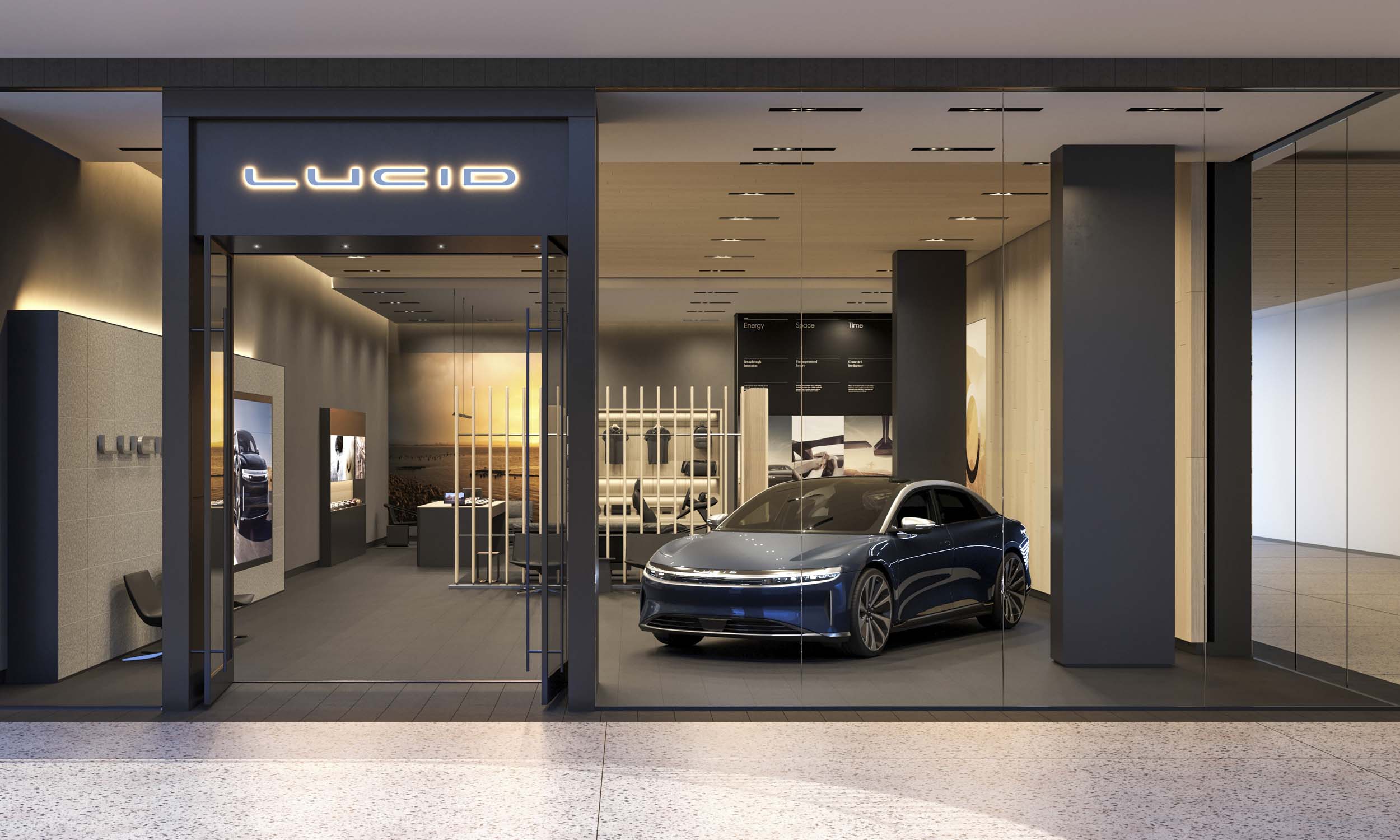 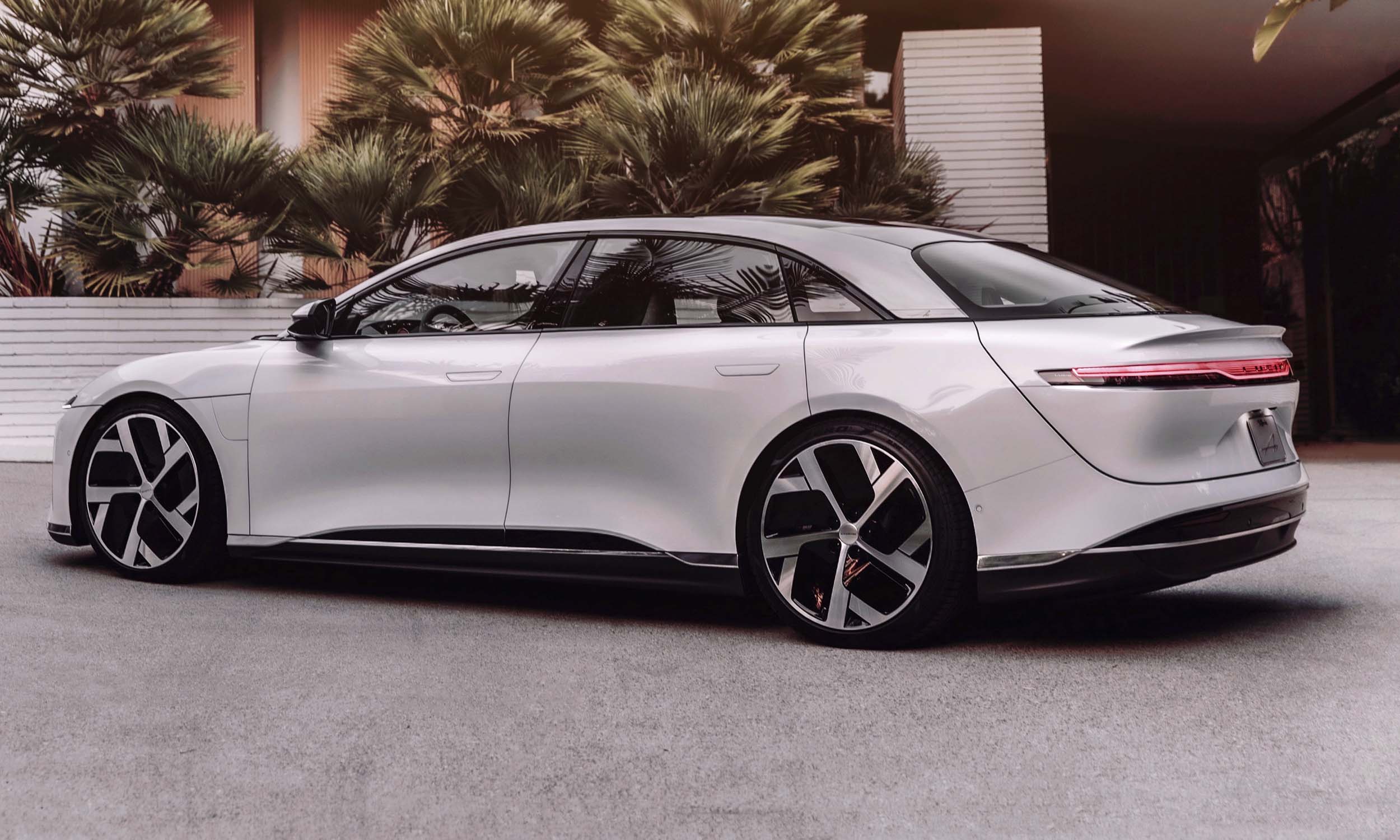 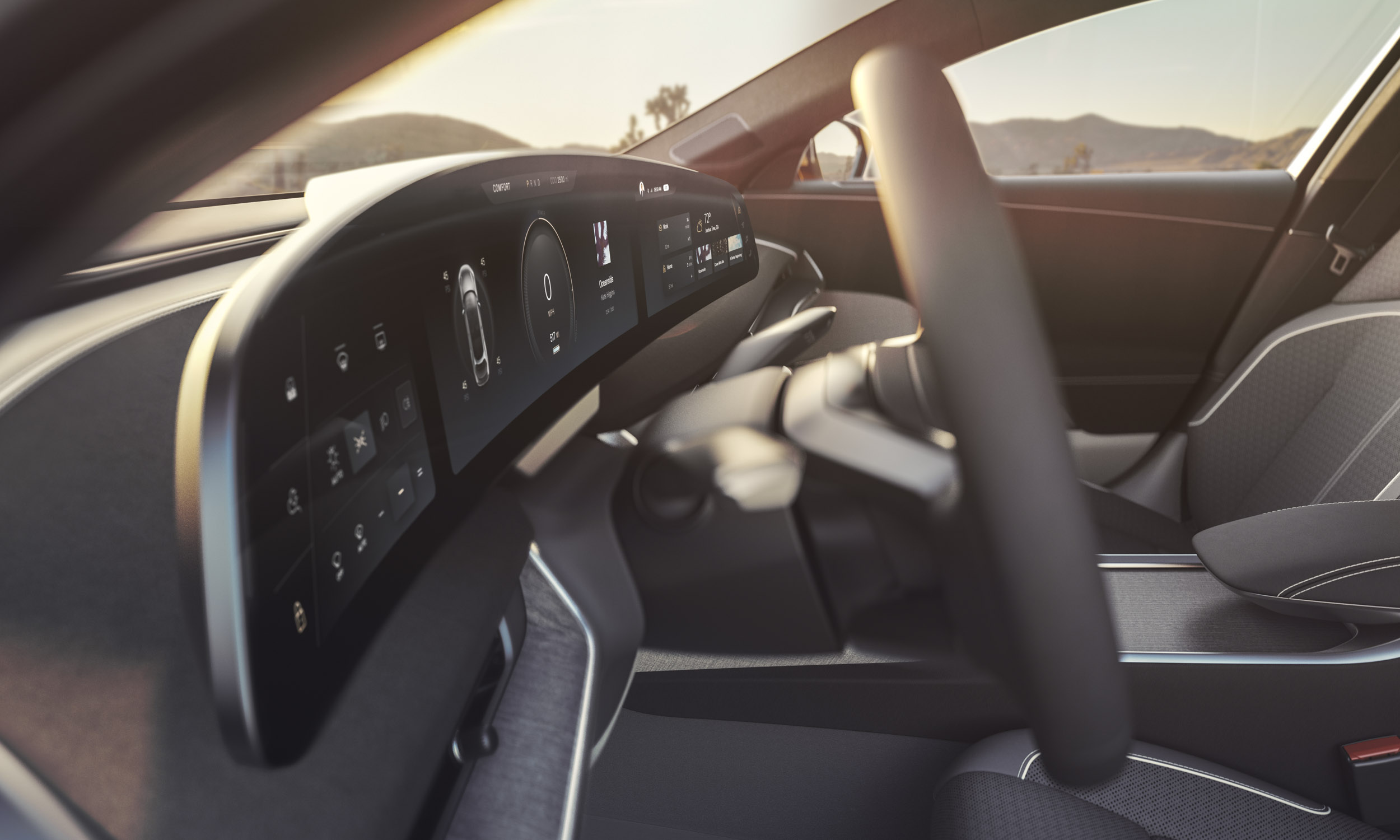 Lucid Air
The Air’s curved instrument display seems to float above the dashboard. 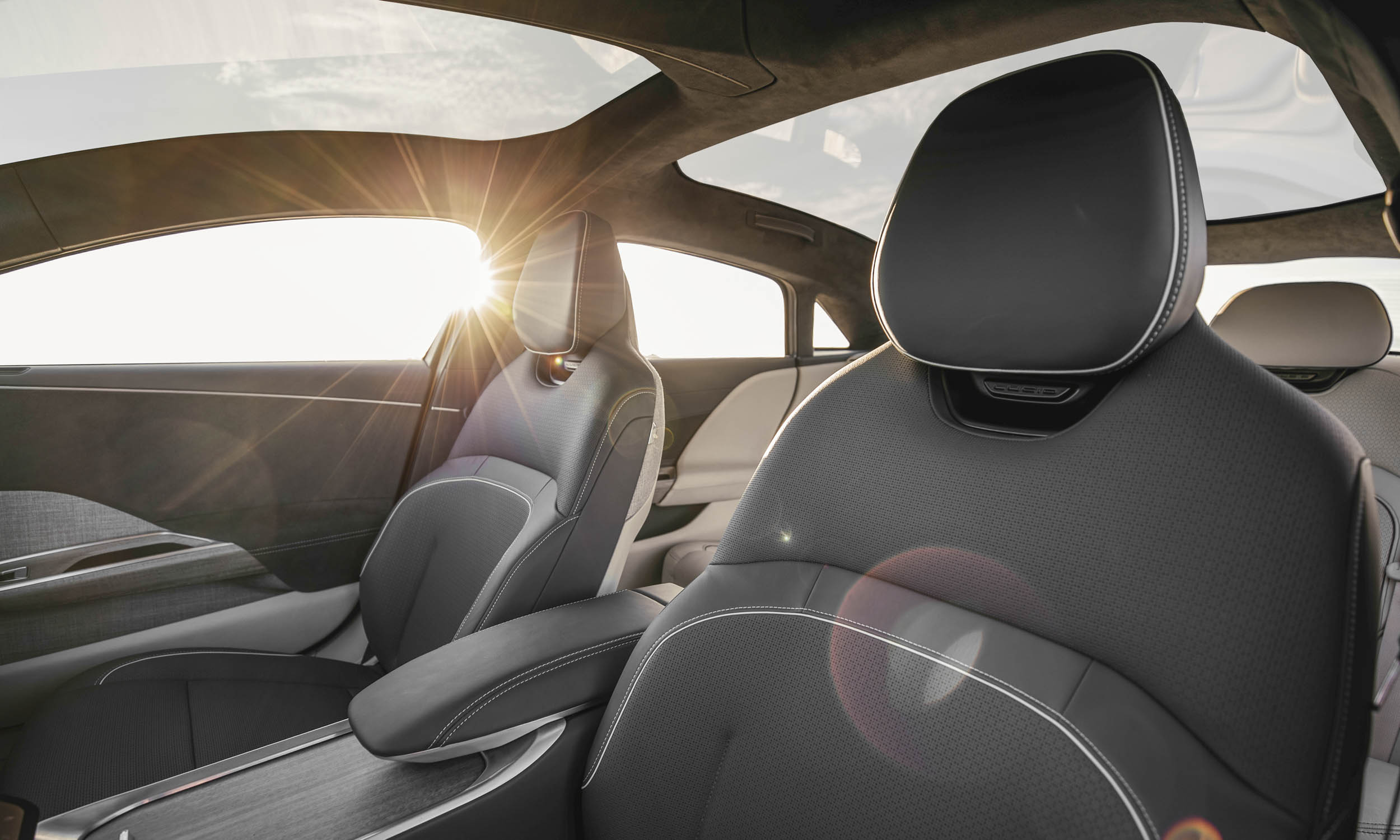 Lucid Air
A glass roof gives the Air a spacious feeling inside. 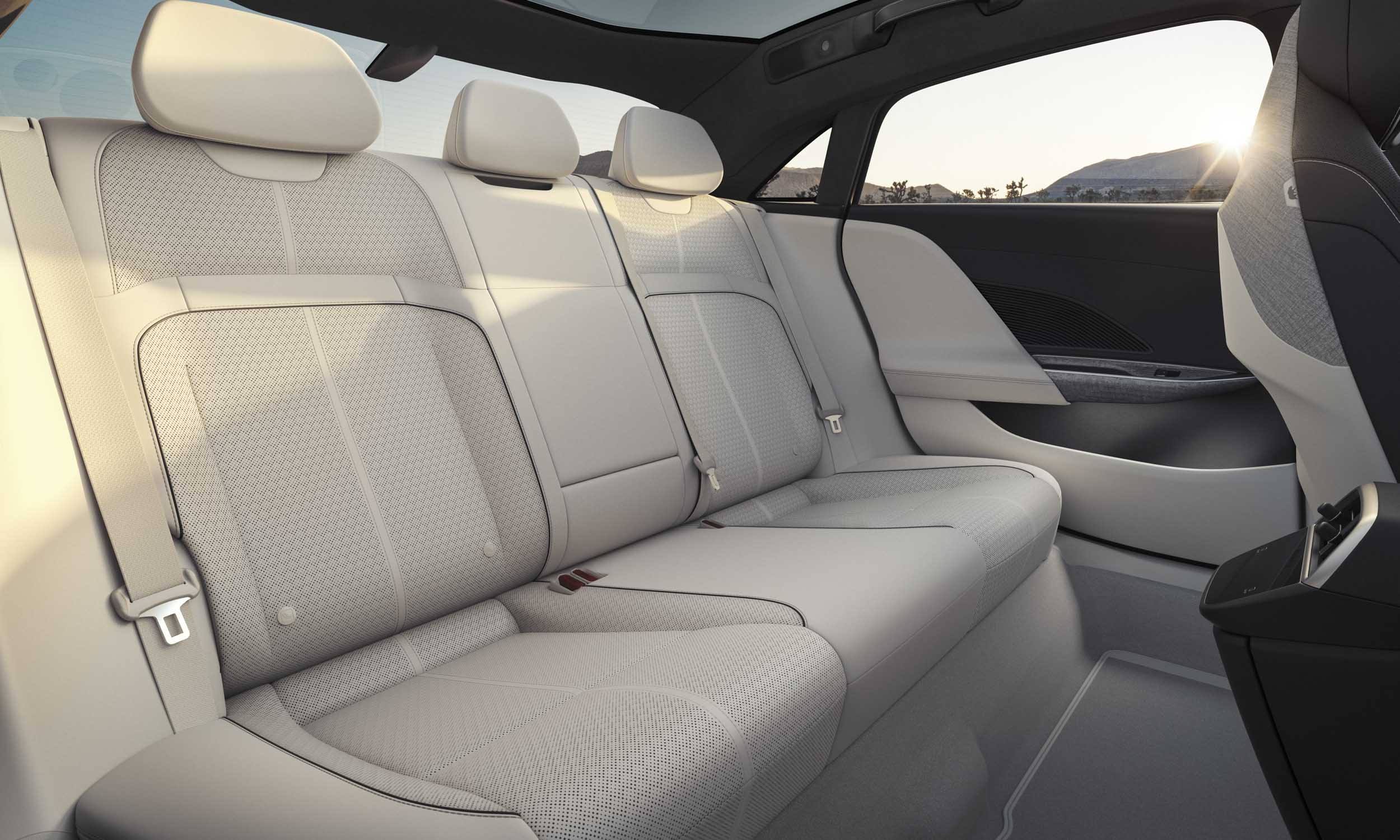 Lucid Air
The rear seat of the Lucid Air luxury sedan has plenty of legroom, further enhanced by a flat floor. 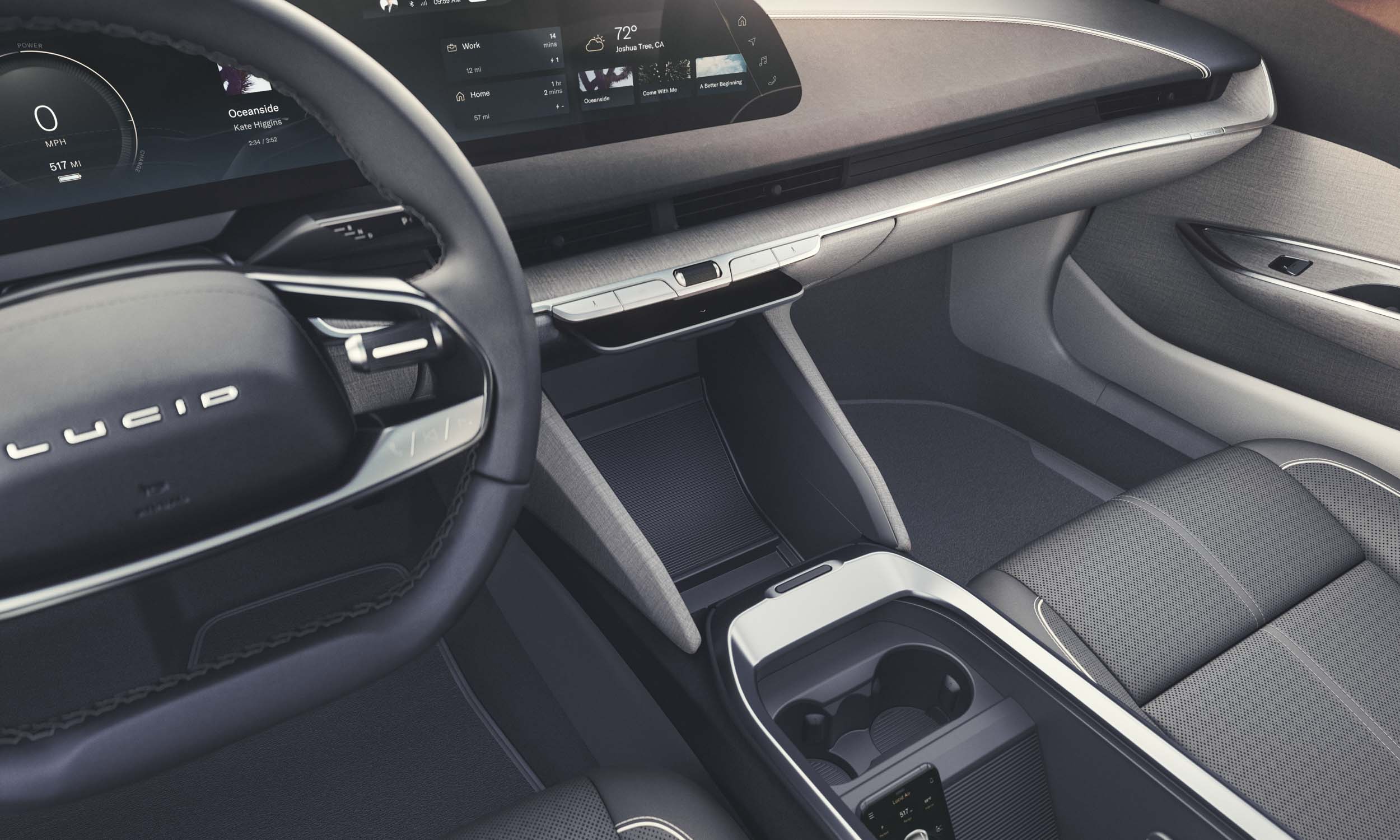