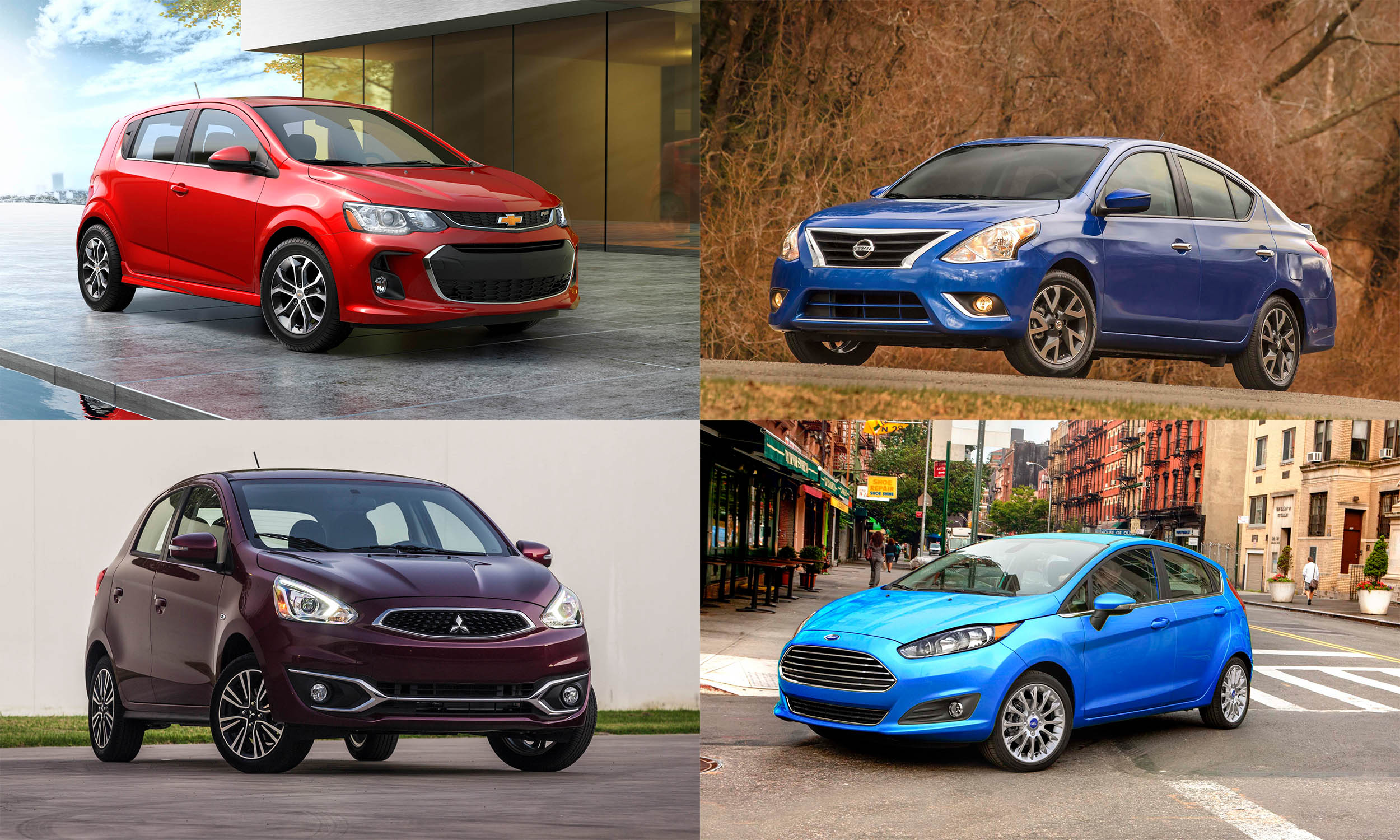 Least Expensive
Cars are an expensive commodity. Since many Americans are not purchasing houses, an automobile can often be the highest-priced purchase of a lifetime. According to analysts at Kelley Blue Book, the average transaction price for a new car is now more than $36,000 (based on January 2018 data), but there are plenty of options available well below that average for folks on a budget. With prices starting around $12,000, quality new vehicles are available, complete with new car warranties and a surprising number of standard features. Here’s a look at the 20 least expensive 2018 models available in America — all priced below $19,000. 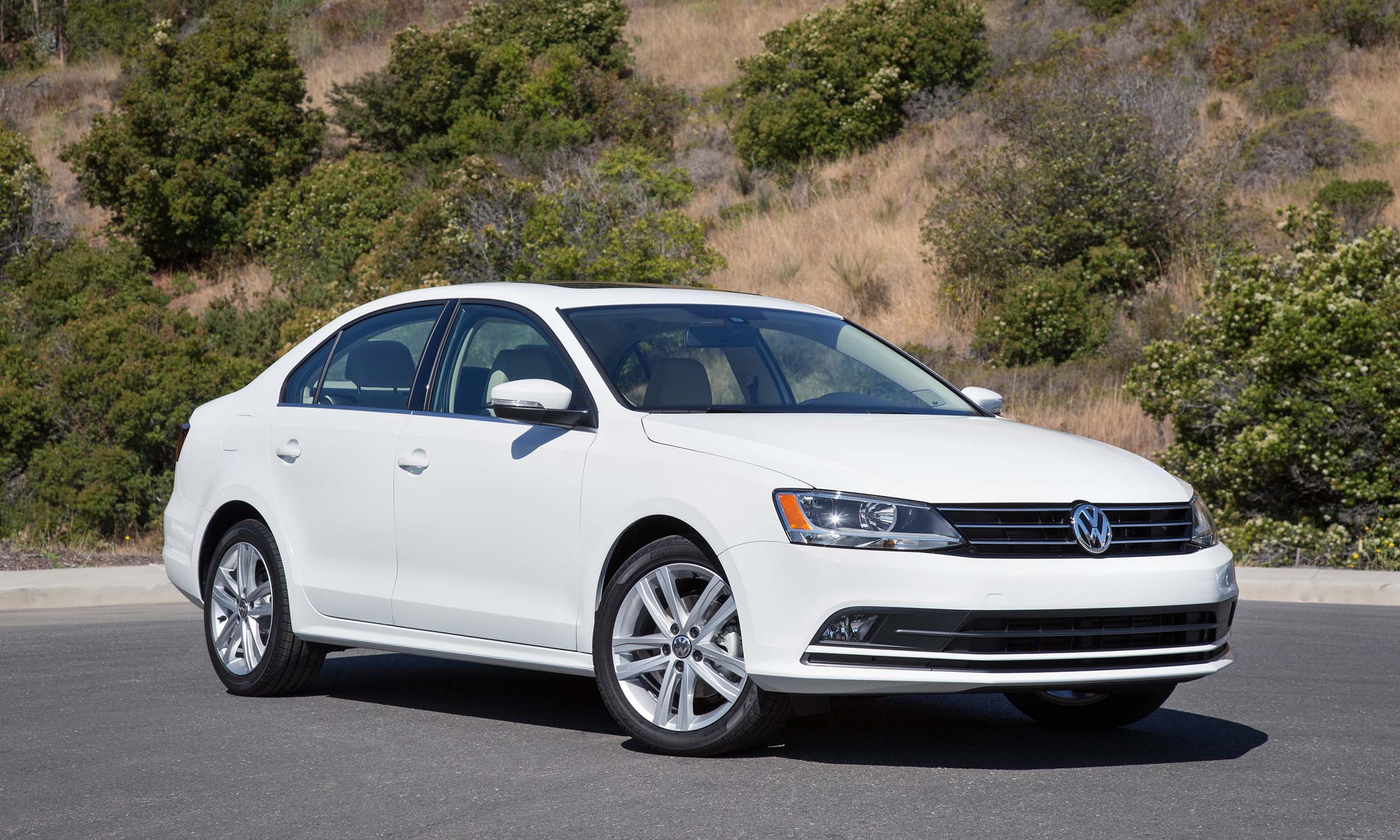 Volkswagen Jetta
Base MSRP: $18,645
The best-selling model in the Volkswagen lineup, Jetta offers great value in a fun-to-drive 4-door sedan. The base-level Jetta S has a 1.4-liter turbocharged engine that produces 150 horsepower while delivering up to 40 mpg on the highway and 28 in the city with its 5-speed manual transmission. Even the Jetta S comes well equipped with standard features that include a 5-inch color touchscreen display, Bluetooth connectivity, a rearview camera and an AM / FM stereo with four speakers. 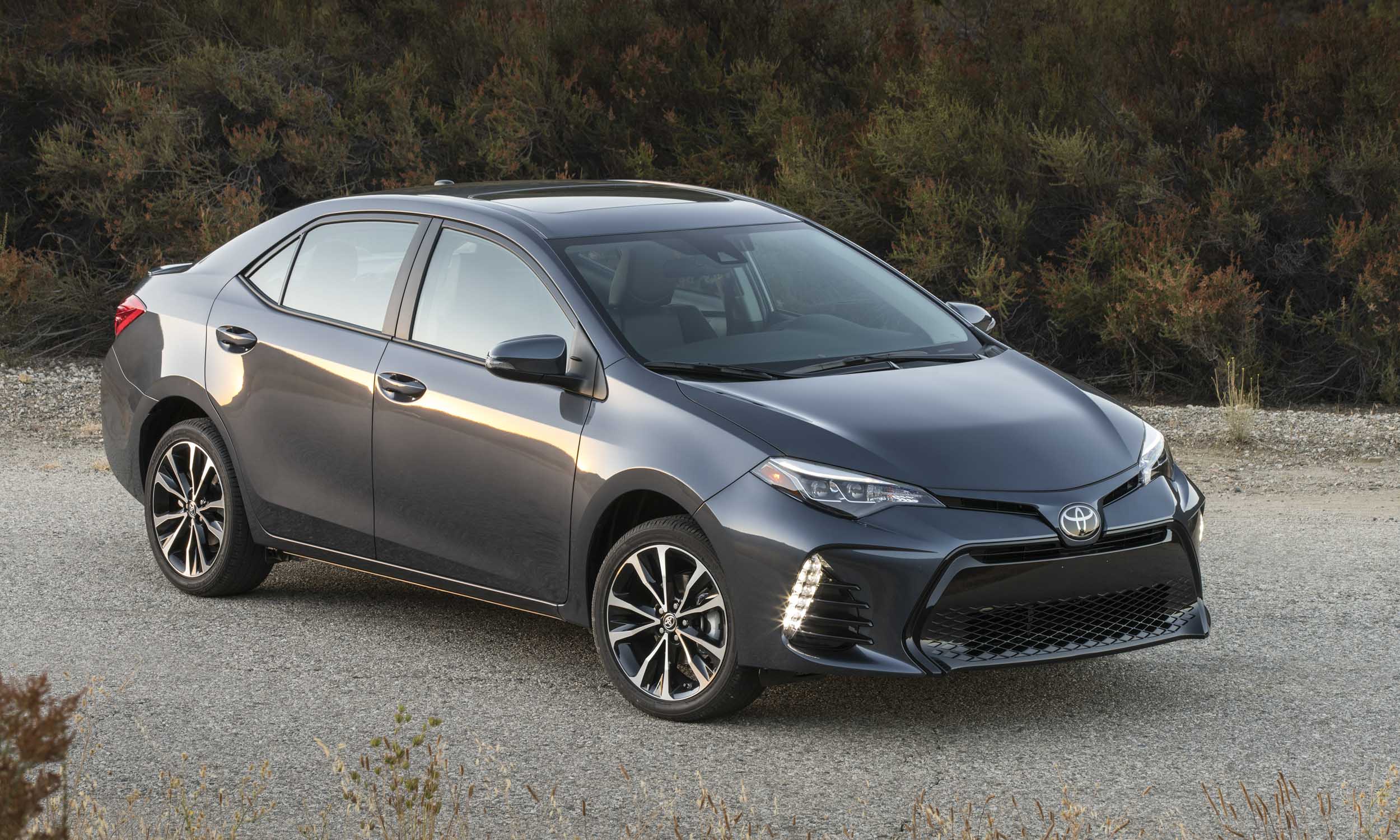 Toyota Corolla
Base MSRP: $18,550
Its hard to believe that this is the 52nd year that Toyota has sold the Corolla which is the brand’s best-selling nameplate of all time. Refreshed for 2017, Corolla gets power from an efficient 1.8-liter engine that achieves 132 horsepower while delivering 35 mpg on the highway when equipped with a 6-speed manual transmission (the standard CVT gets 36 mpg). Toyota has equipped all Corollas with Toyota Safety Sense-P, which includes a Pre-Collision System with Pedestrian Detection, Lane Departure Alert with Steering Assist, Dynamic Radar Cruise Control and Automatic High Beams. 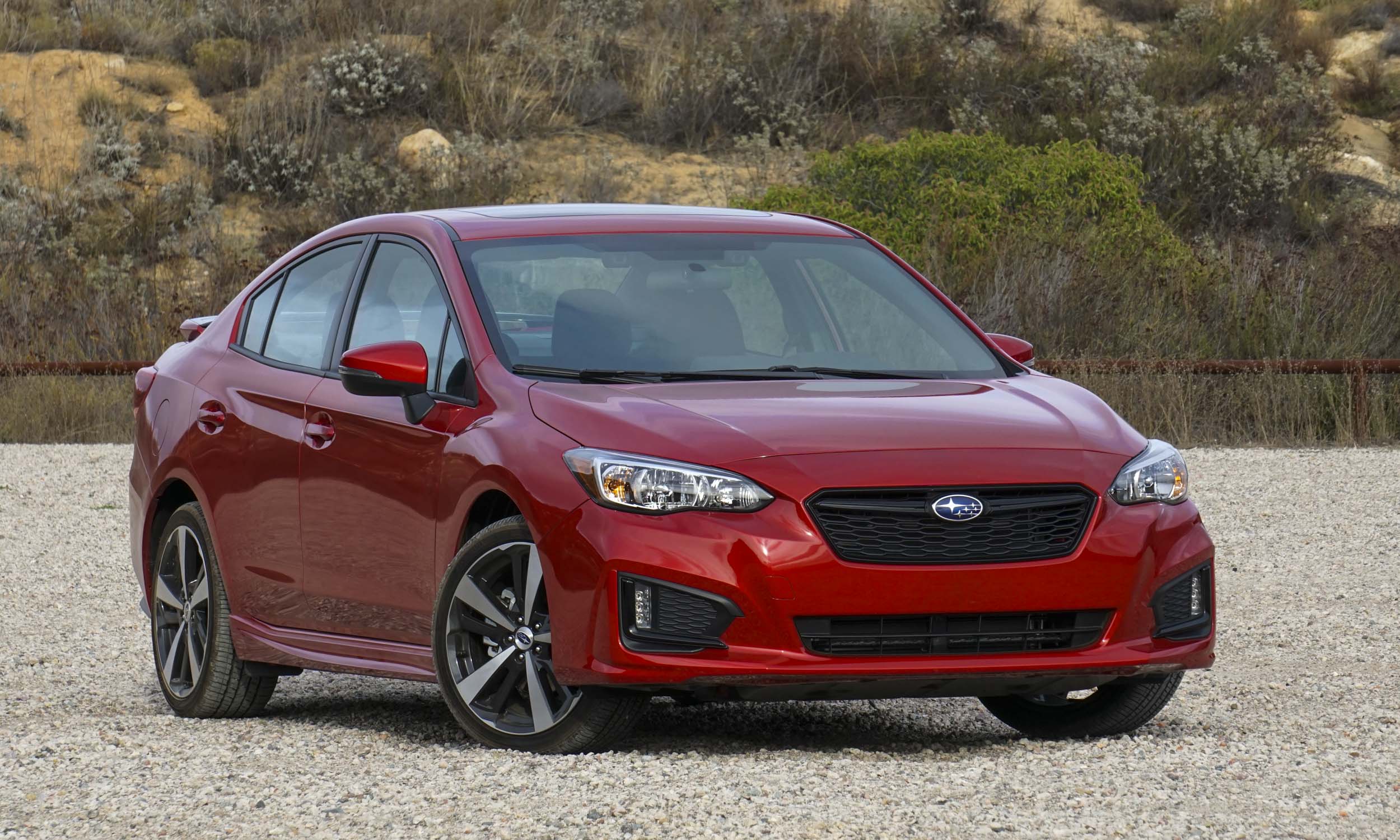 Subaru Impreza
Base MSRP: $18,495
Subaru’s compact entry was all new for the 2017 model year. Available as a sedan or hatchback, the Impreza is built on an all-new Subaru global platform that was “designed to deliver significantly higher levels of driving pleasure, agility, crash protection and ride comfort.” All Imprezas are equipped with a 2.0-liter boxer engine producing 152 horsepower directed to Subaru’s full-time all-wheel-drive system. The stylish small car also is quite fuel efficient, achieving up to 38 mpg on the highway. Standard features include a 6.5-inch touchscreen display, Android Auto / Apple CarPlay, a split-folding rear seat and a rearview camera. 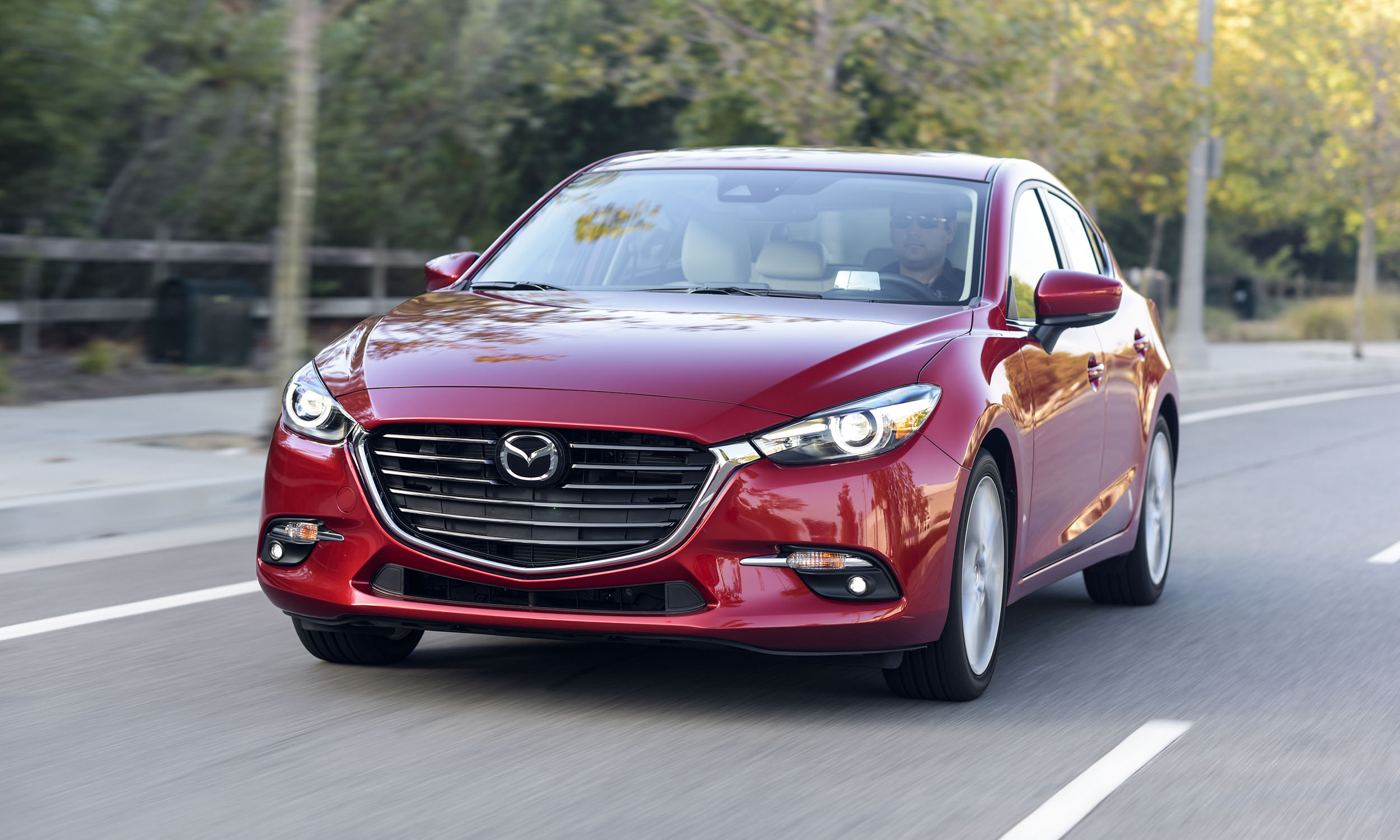 Mazda Mazda3
Base MSRP: $18,095
Although Mazda no longer uses its “Zoom-Zoom” tagline as extensively as it once did, if you’ve ever driven a Mazda you know why that tag still fits. Available as a 4-door sedan or a hatchback, the Mazda3 offers a versatile interior in a stylish design that fits nicely within the Mazda lineup. The base Mazda3 sports a SKYACTIV-G 2.0-liter 4-cylinder engine producing 155 horsepower while delivering EPA fuel-economy ratings of 28 mpg city / 38 mpg highway. Standard features include a rearview camera, a 7-inch full-color touchscreen display and Pandora, Stitcher and Aha internet radio integration. Smart City Brake Support is also standard, which helps drivers avoid low-speed collisions. 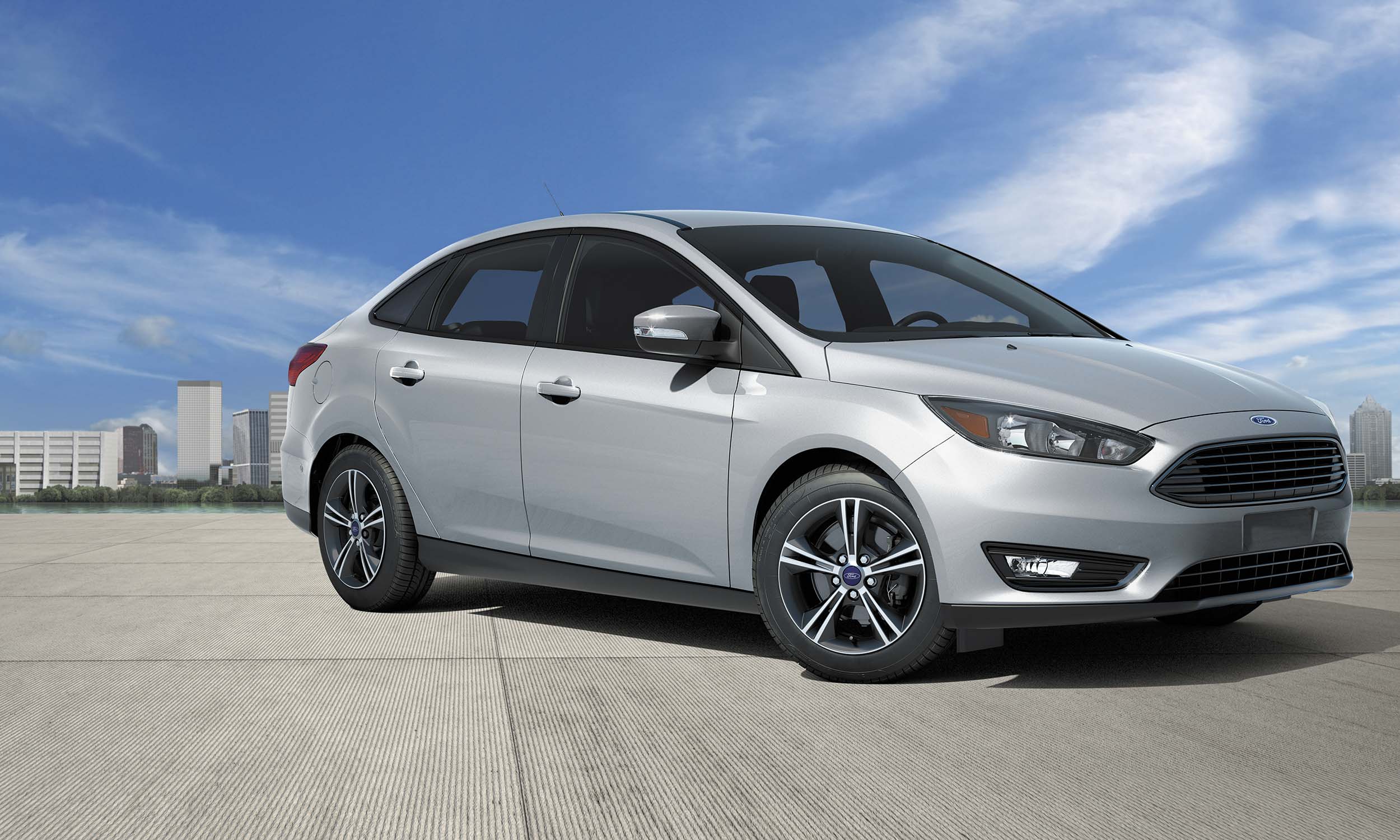 Ford Focus
Base MSRP: $17,860
Ford offers the compact Focus in a variety of configurations, ranging from the base-level S Sedan to the high-performance all-wheel-drive Focus RS. The Focus S is powered by a 2.0-liter 160-horsepower engine teamed with a 5-speed manual transmission. Standard equipment includes remote keyless entry, a rearview camera, a message center with trip computer, an AM/FM stereo and Ford’s SYNC voice recognition and entertainment system. 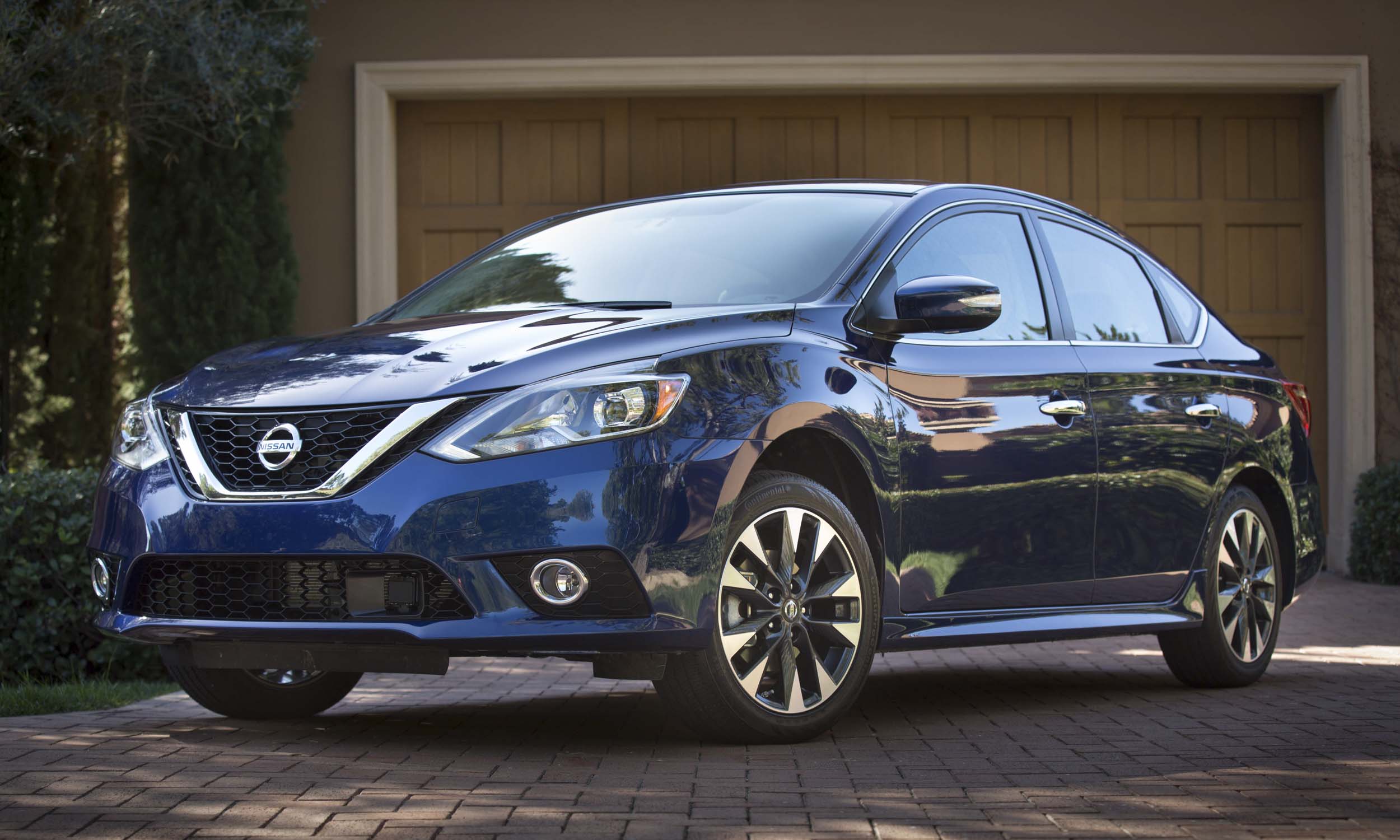 Nissan Sentra
Base MSRP: $16,990
A member of the Nissan lineup for more than 35 years and now in its seventh generation, Sentra was revised for the 2016 model year with updated styling, retuned suspension and a refreshed interior. The base-level Sentra S standard equipment includes a 5-inch color touchscreen display, Bluetooth connectivity, a rearview monitor and an AM / FM / CD audio system with four speakers. For the 2018 model year, Nissan made Automatic Emergency Braking standard equipment on all Sentras with automatic transmissions. 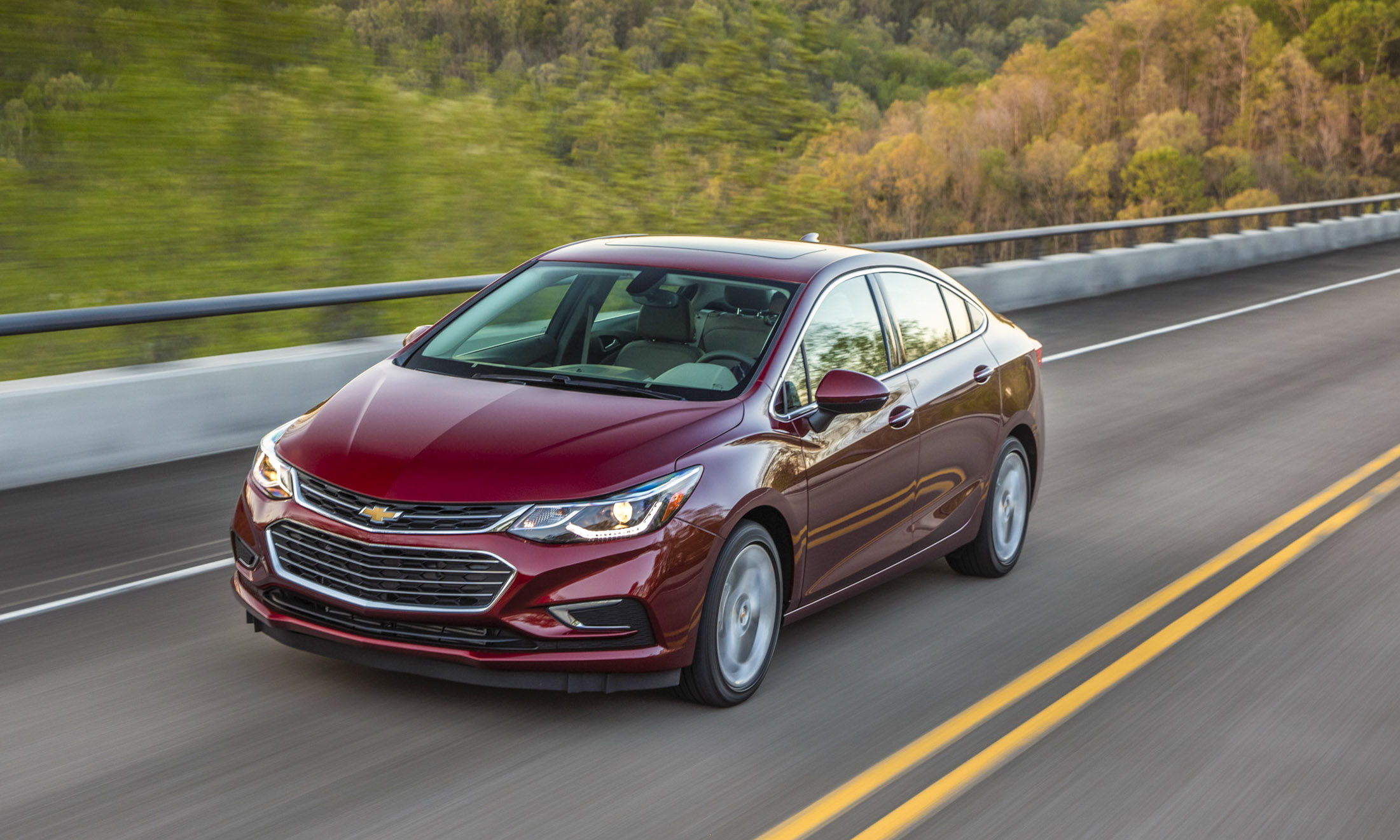 Chevrolet Cruze
Base MSRP: $16,975
Cruze continues as one of the most successful small cars the Detroit-based automaker has ever produced, and it is currently one of the best-selling passenger cars in America. The Cruze was updated for the 2016 model year — it’s larger and lighter than the previous model. In addition to fresh styling, Cruze received the latest safety technology as well as a new 1.4-liter turbocharged 153-horsepower engine that’s EPA rated at 27 mpg in the city / 40 mpg on the highway with a manual transmission. 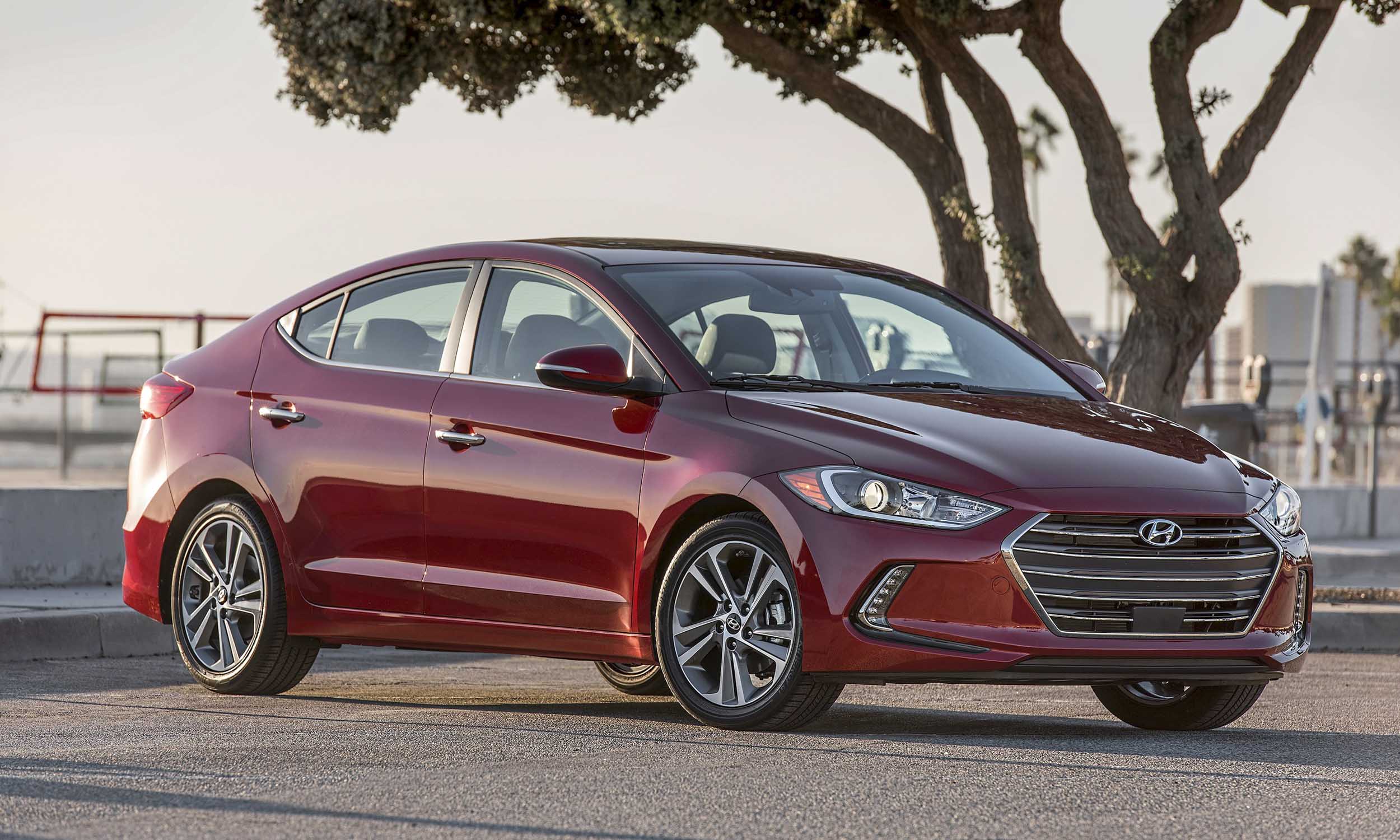 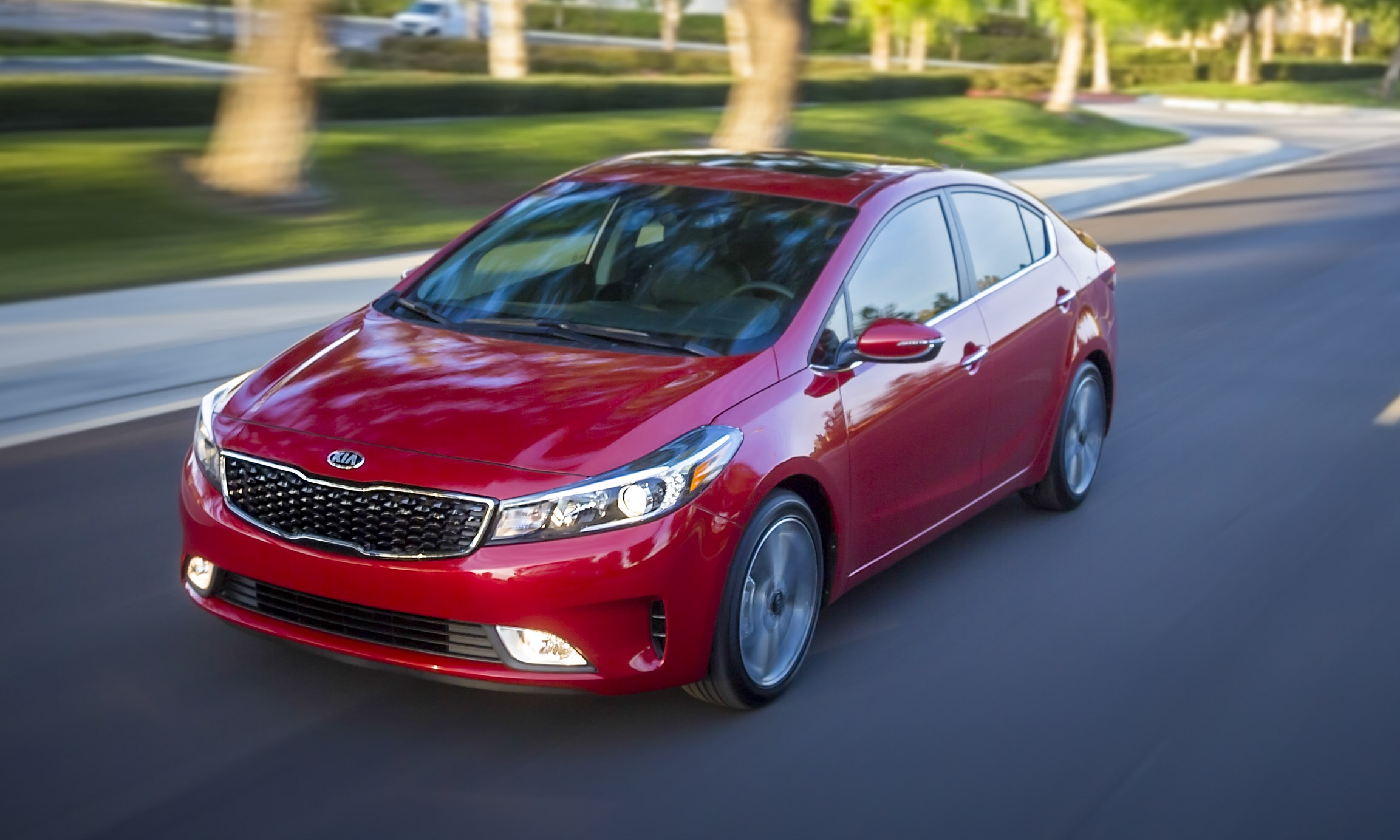 Kia Forte
Base MSRP: $16,800
The entry-level model in the Kia lineup, Forte is the brand’s best-selling model. Kia made several updates to the car last year — a new front bumper, a revised tiger nose grille, redesigned headlights with available Xenon HID, and new available LED taillights. As with other models from the Korean automaker, the Forte offers impressive value via standard equipment that includes an AM / FM / CD / MP3 / SiriusXM audio system, USB input jacks, Bluetooth connectivity, a 6-way adjustable driver’s seat and steering-wheel-mounted audio controls. The standard 2.0-liter engine produces 147 horsepower and can be teamed with either a 6-speed manual or 6-speed automatic transmission; it is rated at 34 mpg on the highway. An all-new 2019 Forte is slated to arrive in showrooms later this year. 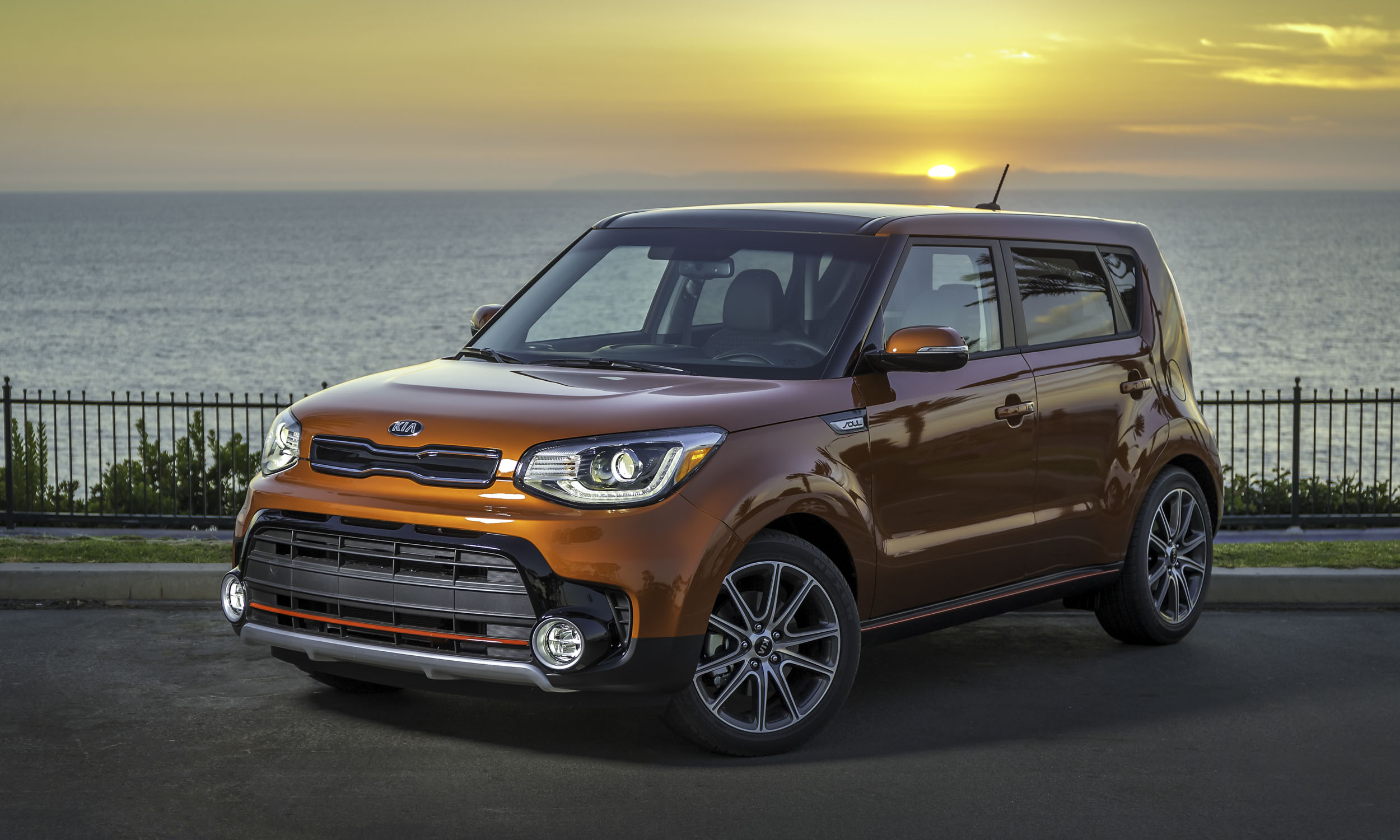 Kia Soul
Base MSRP: $16,200
Not many vehicles on the market can be called unique, but there aren’t many vehicles on the road quite like the Kia Soul. Last redesigned in 2014, Soul features a roomy interior for five occupants and a spacious cargo area — all wrapped in a funky package that redefines the “boxy” car segment. The base-level Soul gets a 130-horsepower 1.6-liter engine teamed with a 6-speed manual transmission that is rated at 24 mpg city / 30 mpg highway. The Soul comes standard with an AM / FM / MP3 audio system with six speakers, Bluetooth connectivity, a 6-way adjustable driver’s seat, air-conditioning, split-folding rear seat and 16-inch alloy wheels. 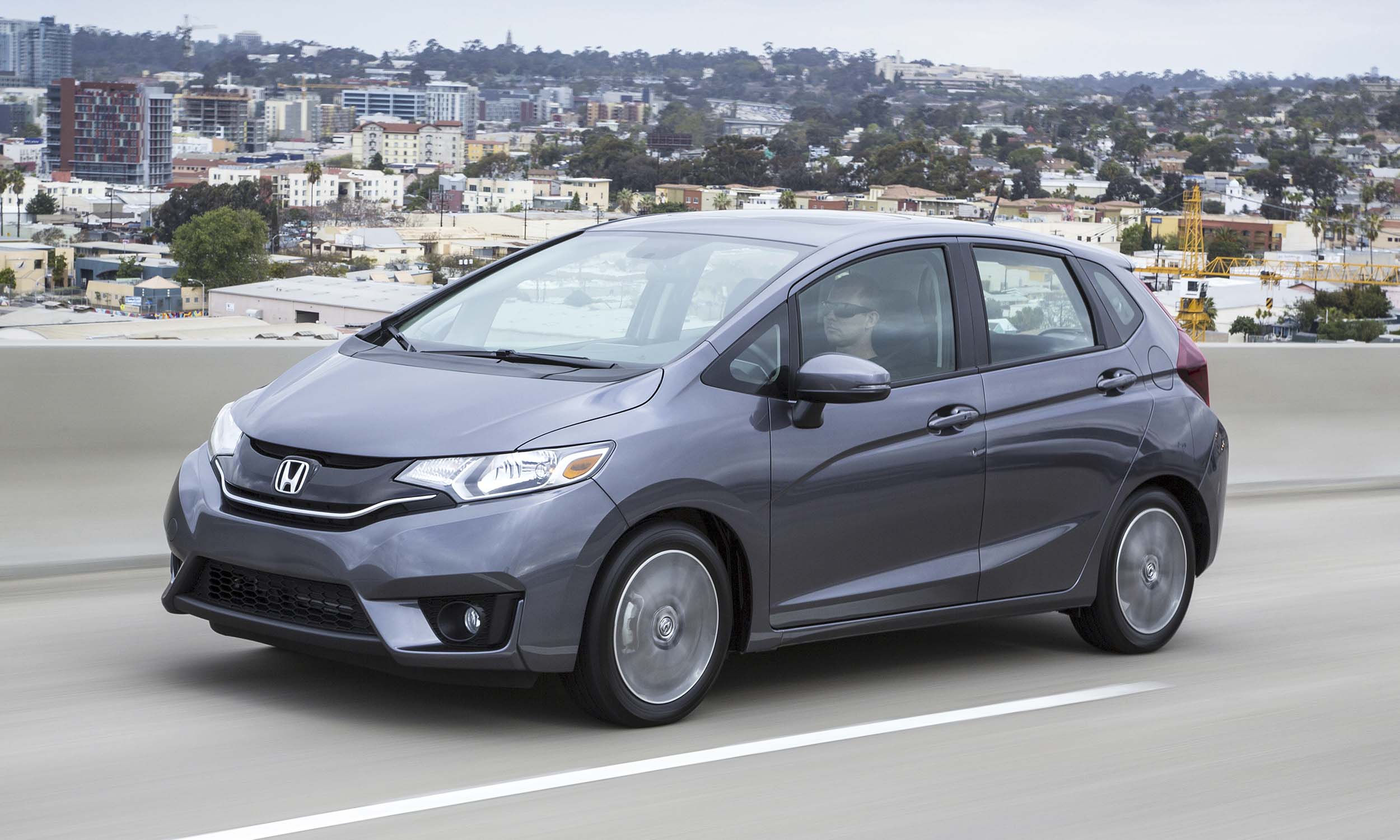 Honda Fit
Base MSRP: $16,190
Honda introduces an updated Fit for the 2018 model year with updated styling, a more dynamic driving experience and new technology and entertainment features. The Fit has always excelled at space management; a prime example of a car that is small on the outside but big on the inside. Powering the Fit is a 1.5-liter engine producing 130 horsepower and achieving up to 36 mpg on the highway for the LX with a standard 6-speed manual gearbox. The base-level Fit LX comes equipped with rearview camera, LED brake lights, air-conditioning with air filtration, a 160-watt AM / FM / CD audio system, Bluetooth hands-free connectivity with audio streaming and active safety features. 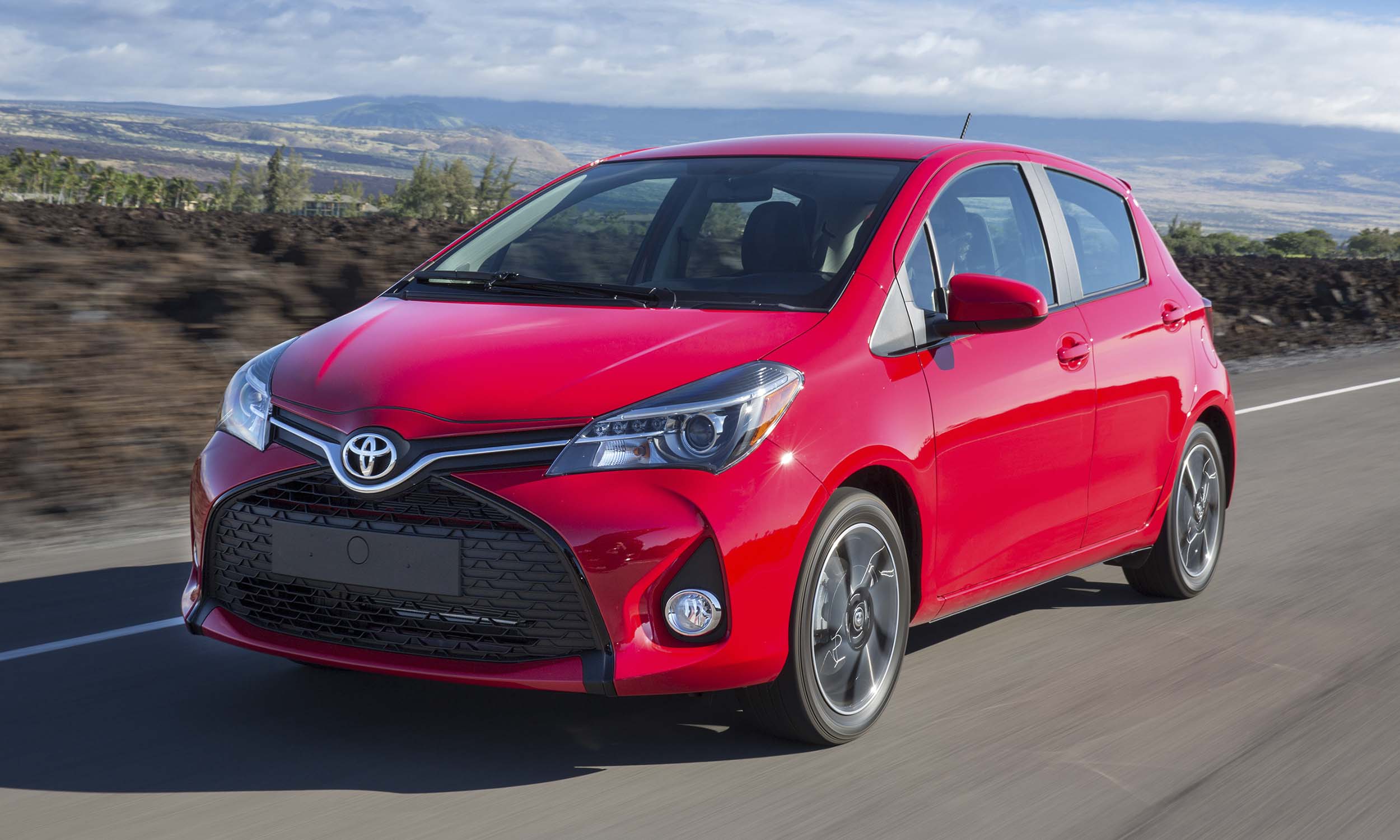 Toyota Yaris
Base MSRP: $15,635
Yaris is the least-expensive Toyota on the U.S. market and receives a refreshed look for the 2018 model year. Available as either a 3-door or 5-door hatchback, the Yaris is powered by a 1.5-liter engine producing 106 horsepower. Standard on all Yaris variants is Toyota Safety Sense C, which includes a Pre-Collision System, Lane Departure Alert, and Automatic High Beams. Also standard on the base-level Yaris L is a rearview camera, the Entune audio system that includes a 6.1-inch touchscreen, an AM /FM / CD player with MP3, six speakers, HD Radio, a USB port with iPod connectivity and control, hands-free phone capability, voice recognition, and Bluetooth music streaming. 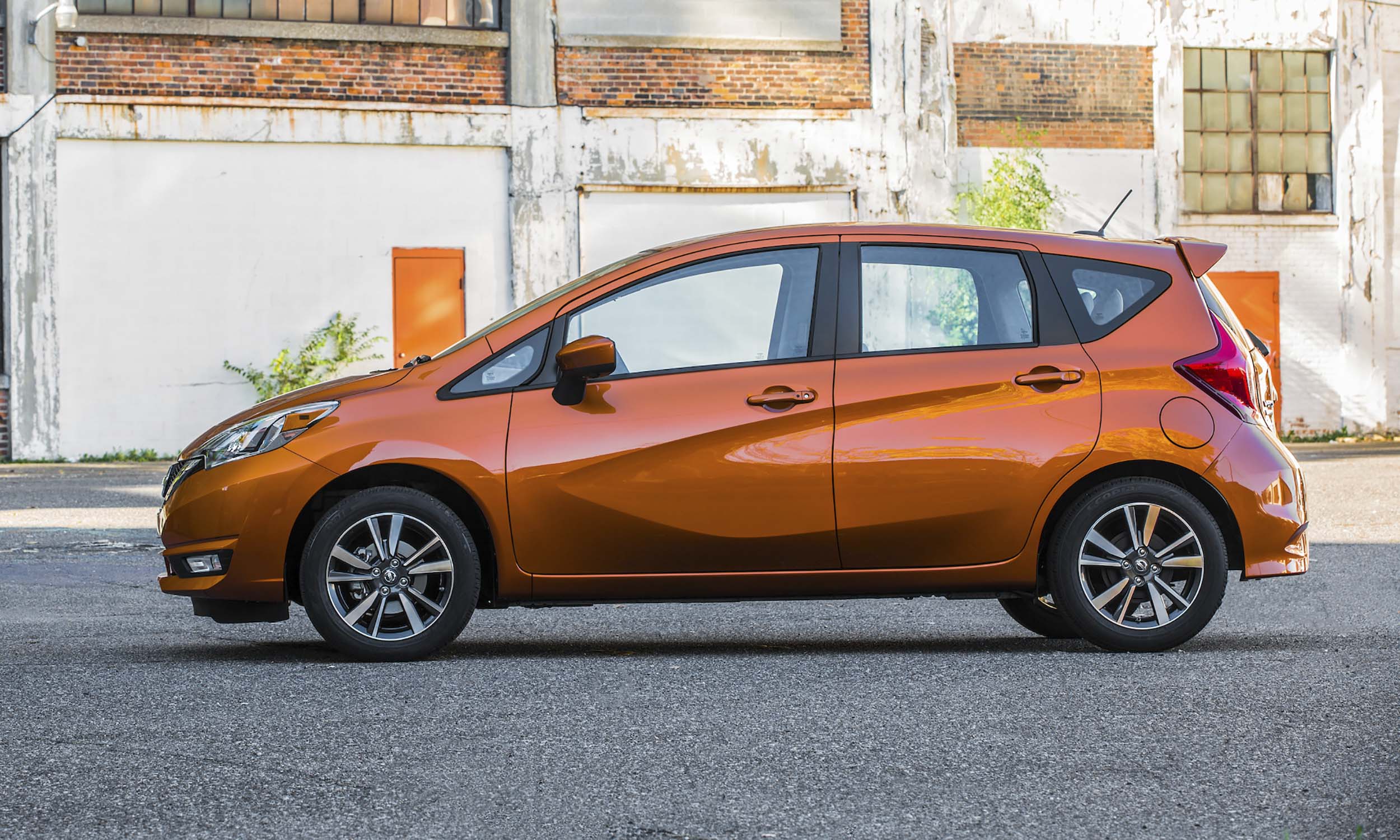 Nissan Versa Note
Base MSRP: $15,480
Nissan added the Note to the Versa lineup for the 2014 model year, providing an economical 5-door hatchback for customers who need a bit more space than that of a sedan. With more rear-seat legroom and cargo space than many of its compact competitors, the Versa Note offers an adjustable floor in the cargo area, providing a space below the floor to hide valuables. A 60/40 split-folding rear seat adds to the cargo-carrying versatility. Carrying the same 109-horse powerplant as the standard Versa, the Note is rated at 39 mpg on the highway with Nissan’s standard Xtronic Continuously Variable Transmission. 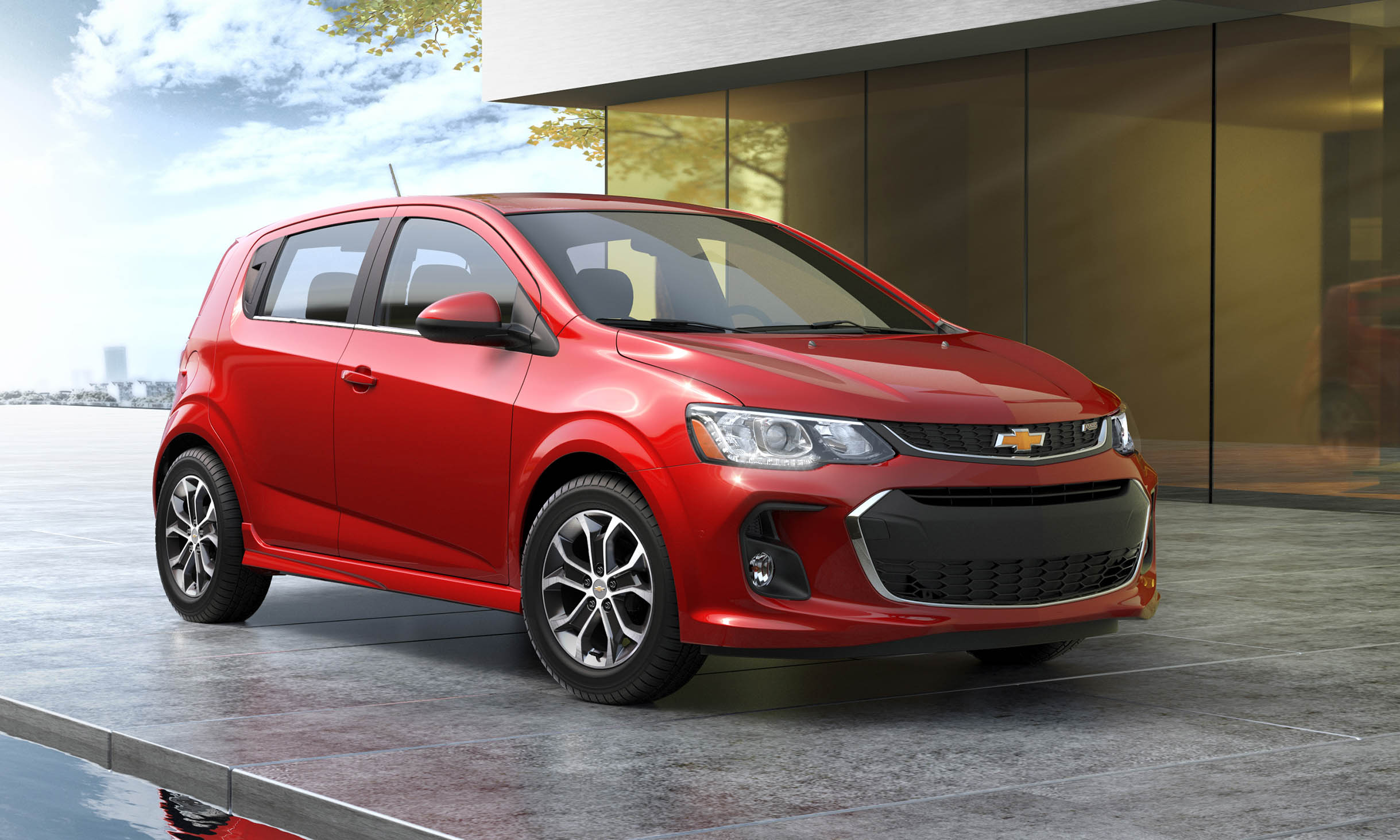 Chevrolet Sonic
Base MSRP: $15,295
It doesn’t seem that long ago, when there were few quality domestic-branded small cars on the U.S. market — thankfully, that’s no longer the case, and the Sonic shines as a great example. The Sonic was redesigned for the 2017 model year, offering a fuel-efficient 1.8-liter engine that produces 138 horsepower and delivering up to 38 mpg on the highway. Standard equipment includes air-conditioning, Bluetooth hands-free connectivity and a free six-month trial of the OnStar Guidance Plan, which provides automatic crash response, stolen vehicle assistance, roadside assistance and turn-by-turn navigation. 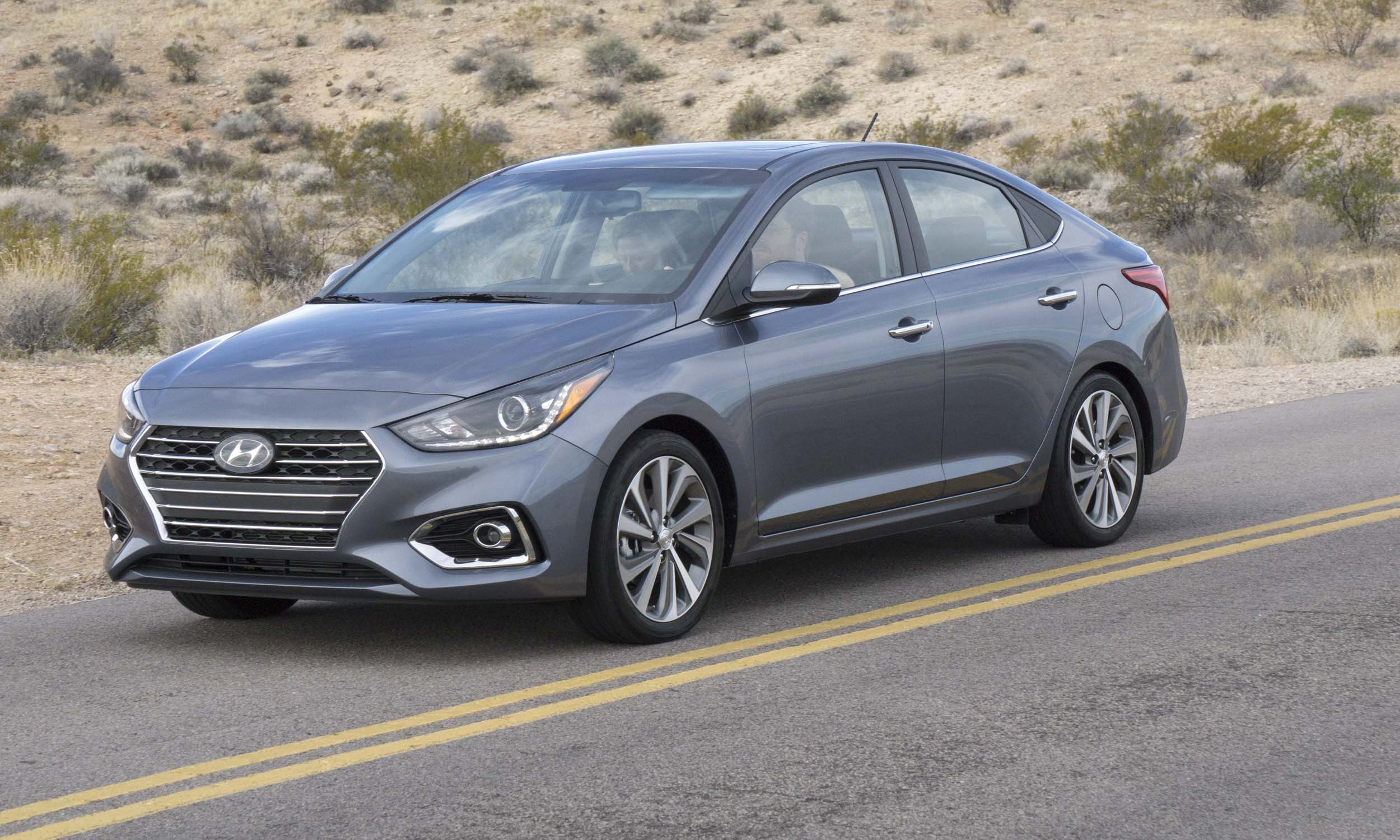 Hyundai Accent
Base MSRP: $14,995
Hyundai built a reputation on creating vehicles that offer attractive styling, great value and continually-improving quality — all attributes of the all-new 2018 Accent. The 2018 Accent rides on a new chassis designed for increased rigidity, resulting in better driving dynamics as well as a surprisingly quieter ride. With its new cascading grille, the Accent’s styling fits into the rest of the Hyundai lineup. The base-level Accent SE comes well equipped with air-conditioning, Bluetooth connectivity, a 5-inch display screen, a rearview camera, an AM / FM / CD / MP3 audio system with four speakers, and 15-inch steel wheels. All trims of the Accent are powered by a 1.6-liter 4-cylinder engine producing 130 horsepower and 119 lb-ft of torque. 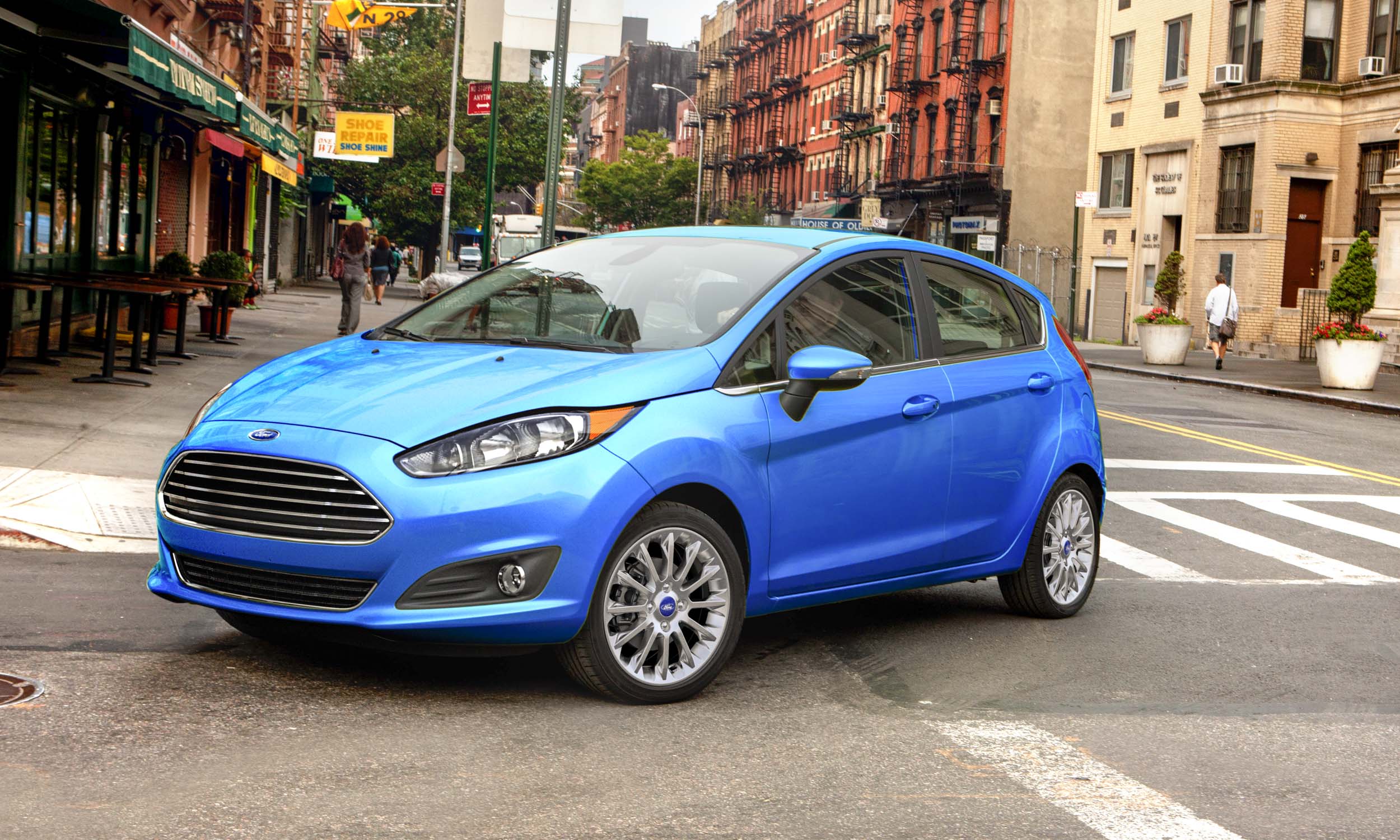 Ford Fiesta
Base MSRP: $14,115
The Fiesta’s popularity continues the trend of small, economical cars that are surprisingly fun to drive. Available as a sedan or hatchback, the Fiesta comes standard with a 120-horsepower 1.6-liter engine rated at 37 mpg on the highway (with the automatic transmission). Fiesta also has a standard AM / FM / MP3 audio system, remote keyless entry, hill-start assist (manual transmission), a rearview camera and 15-inch steel wheels. 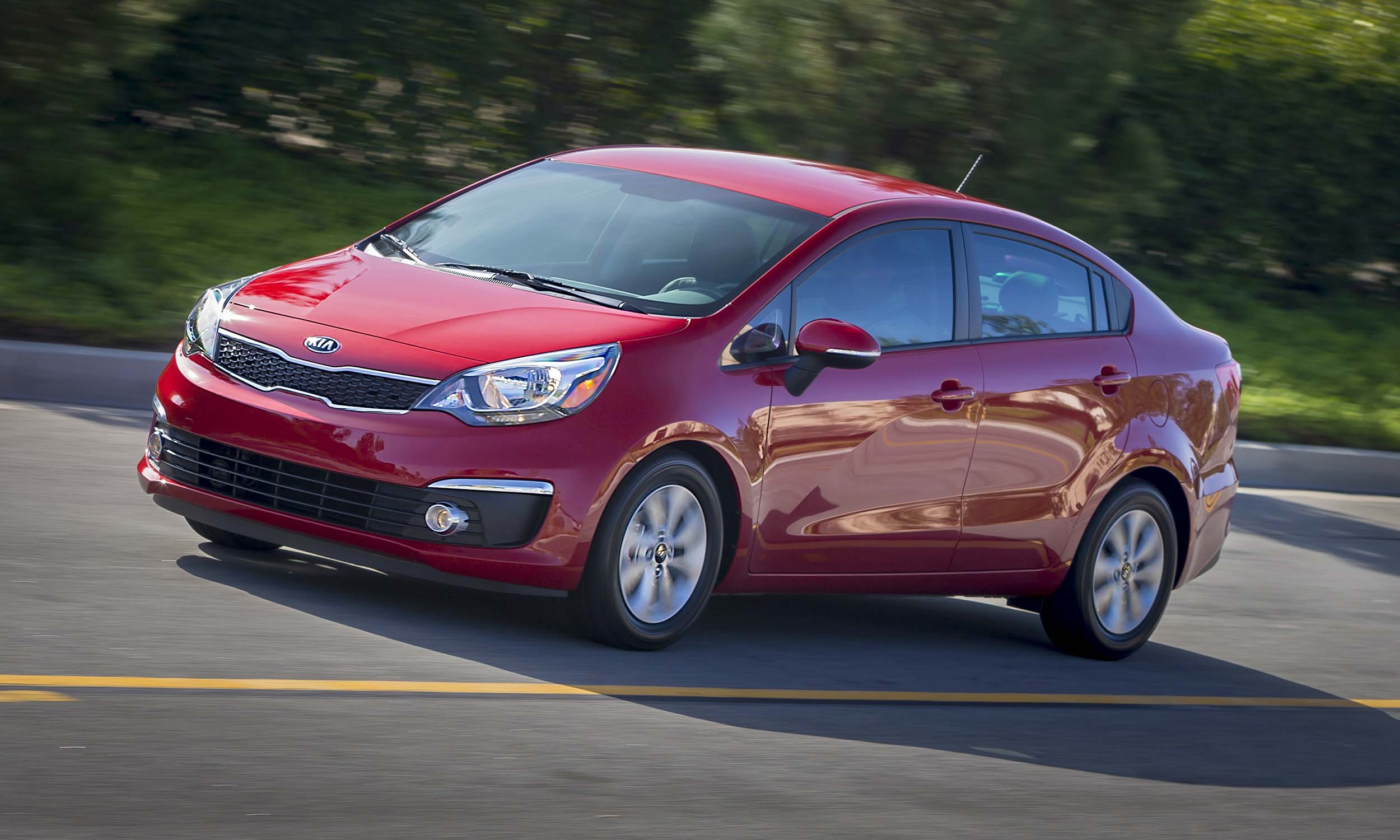 Kia Rio
Base MSRP: $13,900
The least expensive car in the Kia lineup, Rio is all new for the 2018 model year. Longer and wider than the previous model, the new Rio fits well with the rest of the Kia lineup thanks to the latest version of Kia’s “tiger nose” grille. The Rio gets power from a 1.6-liter engine producing 130 horsepower while delivering up to 37 mpg on the highway. The LX is the entry-level trim of the Rio with standard features that include 6-way adjustable driver’s seat, a split-folding rear seat, air-conditioning, and a 5-inch display with an AM / FM / MP3 / Satellite audio system. 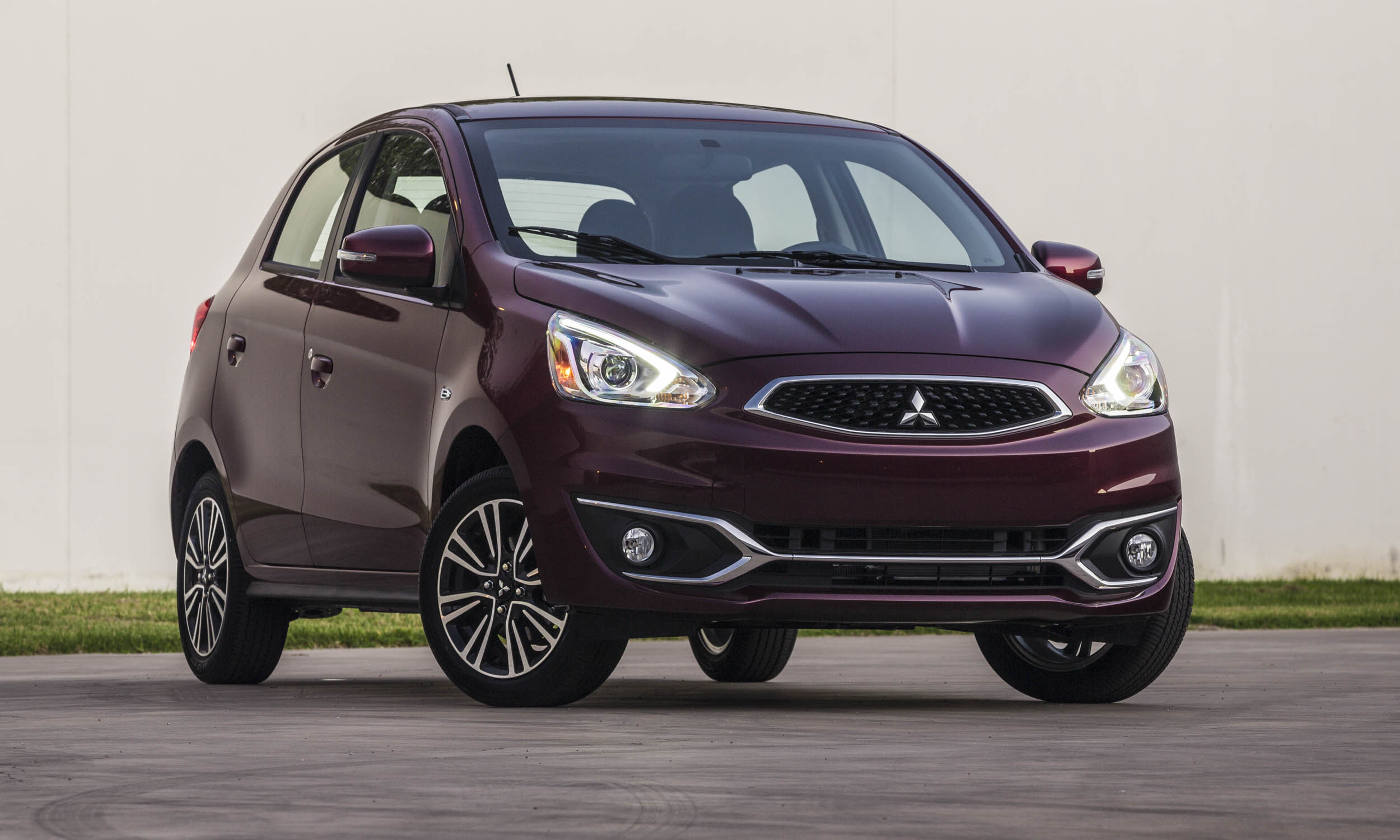 Mitsubishi Mirage
Base MSRP: $13,395
Mitsubishi’s entry subcompact Mirage was redesigned for the 2017 model year with fresh styling inside and out. Mirage’s efficiency and performance improved over the previous generation with a more aerodynamic exterior as well as a power increase to 78 horses from its 1.2-liter 3-cylinder engine. Even with the power increase, Mirage is the lowest-powered car in America; however, it does deliver great fuel savings, with an EPA-rated 37 mpg city / 43 mpg highway. Standard features on the base-level Mirage ES include Bluetooth connectivity and streaming, a 7-inch touchscreen display, a rearview camera, an AM / FM audio system with four speakers, intermittent wipers and 14-inch steel wheels. 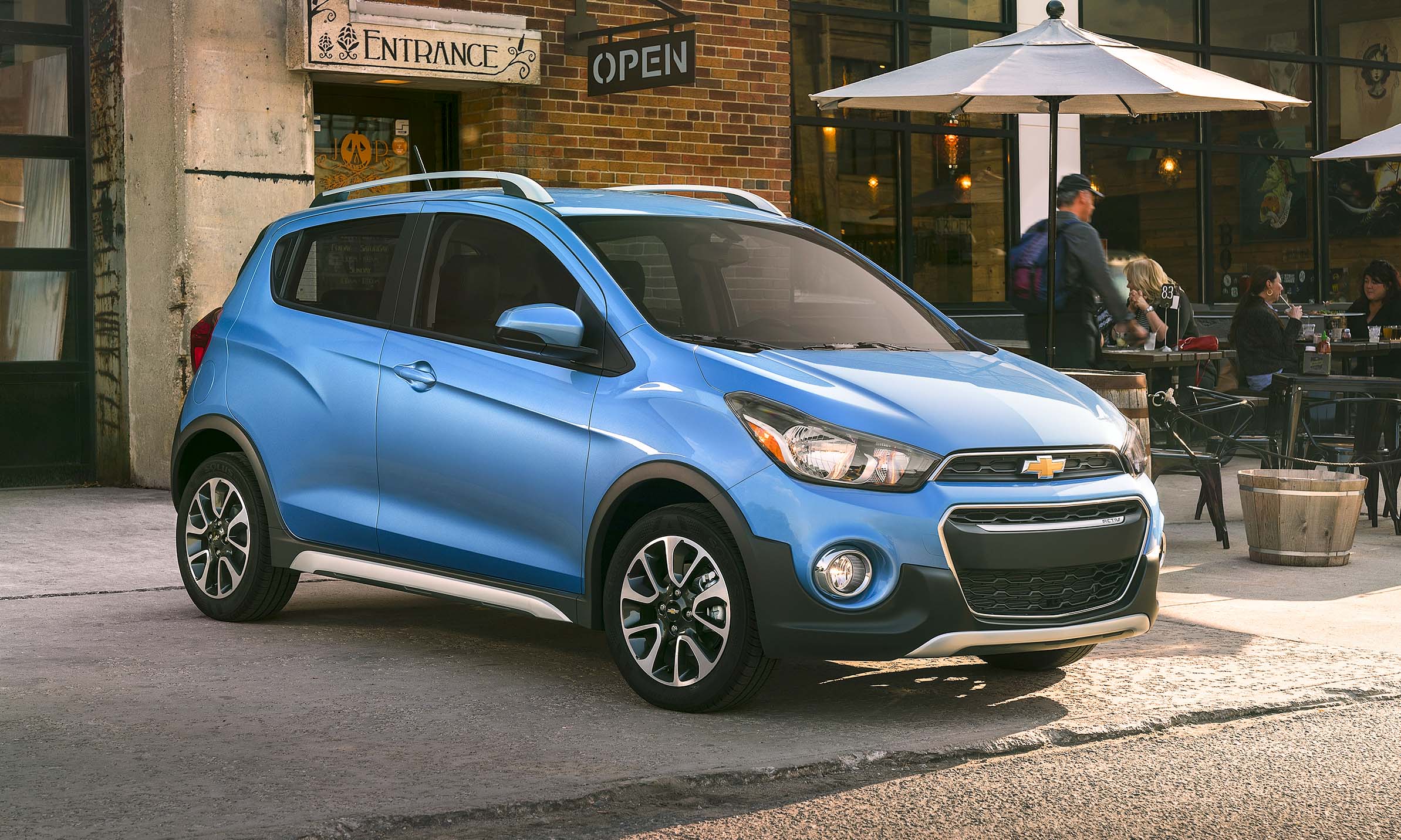 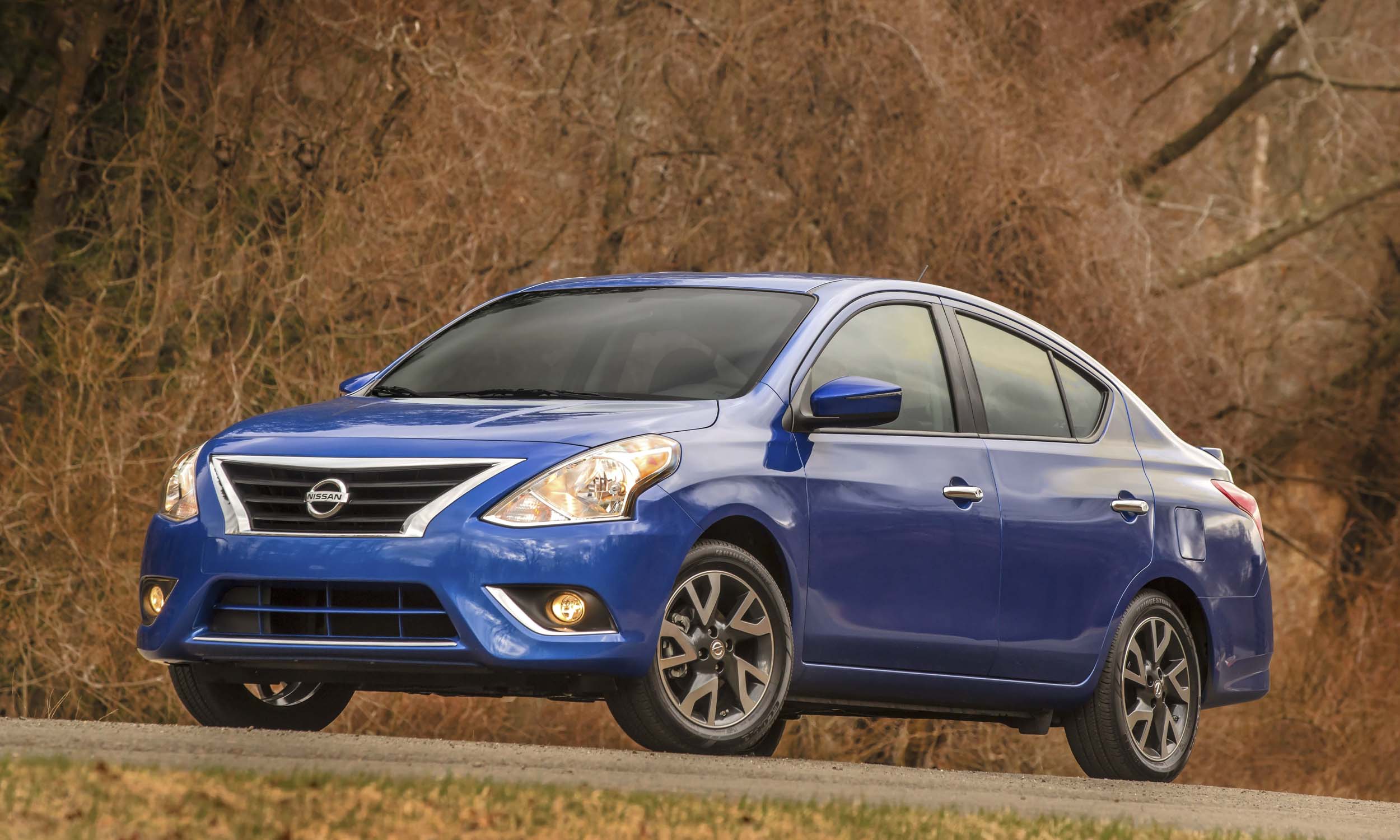 Nissan Versa Sedan
Base MSRP: $12,110
Versa may be the lowest priced new car in America, but even at its low price, the Versa is much more than a bare-bones econobox. Standard equipment includes air-conditioning, an AM / FM / CD audio system with four speakers, Bluetooth hands-free connectivity and a trip computer. Powered by a fuel-efficient 109-horsepower 1.6-liter 4-cylinder engine, the Versa is EPA rated at 36 mpg highway with standard 5-speed manual gearbox. Versa also comes with multiple airbags, stability control, traction control and anti-lock brakes with electronic brake force distribution.