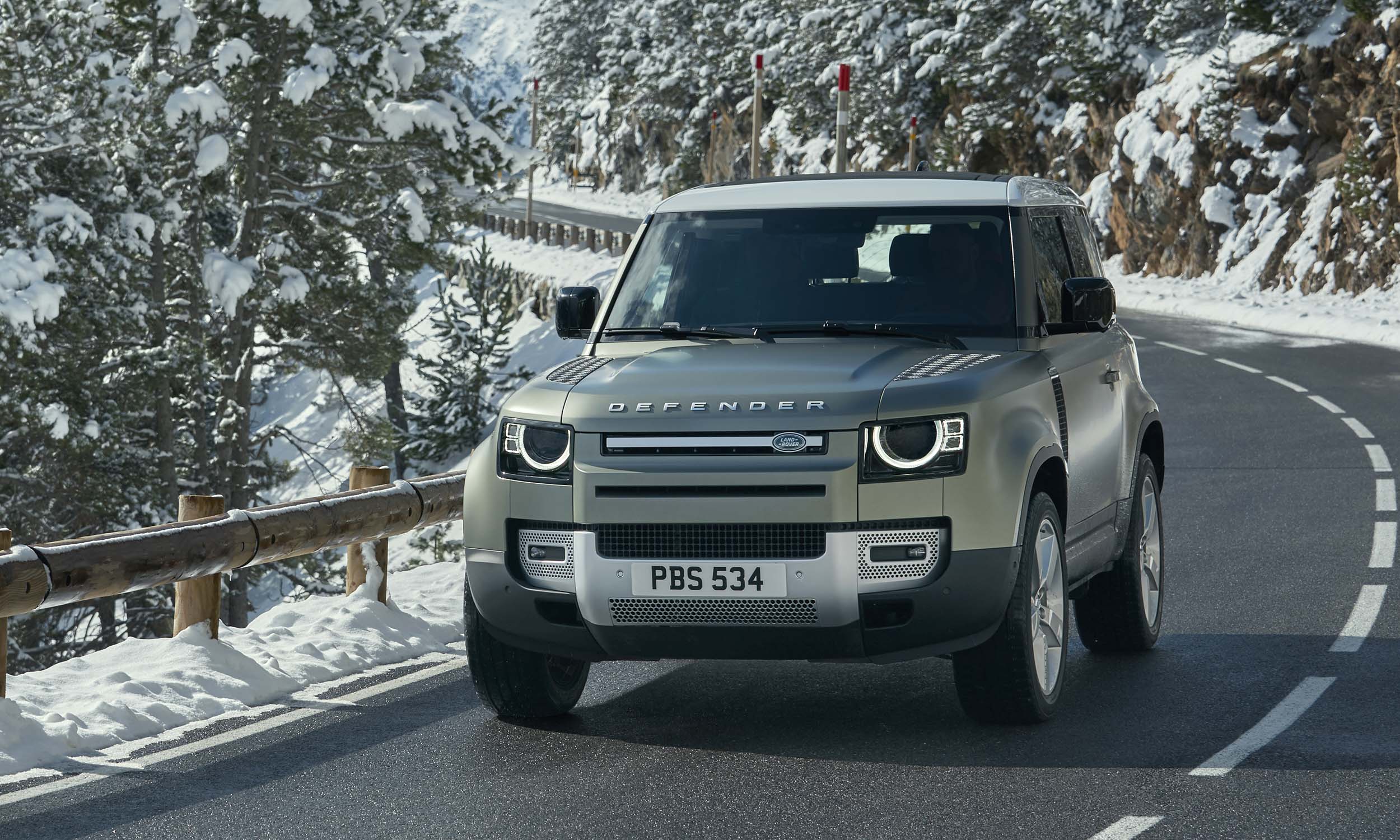 © Jaguar Land Rover Limited
Land Rover Defender
After the model’s 23-year absence from America, today Land Rover announced that 2020 Defender 110 deliveries have begun to U.S. retailers. The next generation of the time-honored, popular SUV has a starting MSRP of $49,900. One of the toughest and most capable vehicles in Land Rover history, the all-new Defender gets built on the automaker’s new all-aluminum D7x platform. The iconic SUV’s design continues the high level of off-road prowess expected from a Defender. Revered by serious off-roaders and collectors alike, the Defender traces its roots back more than 70 years to the original Land Rover, and was last sold in the U.S. in 1997. 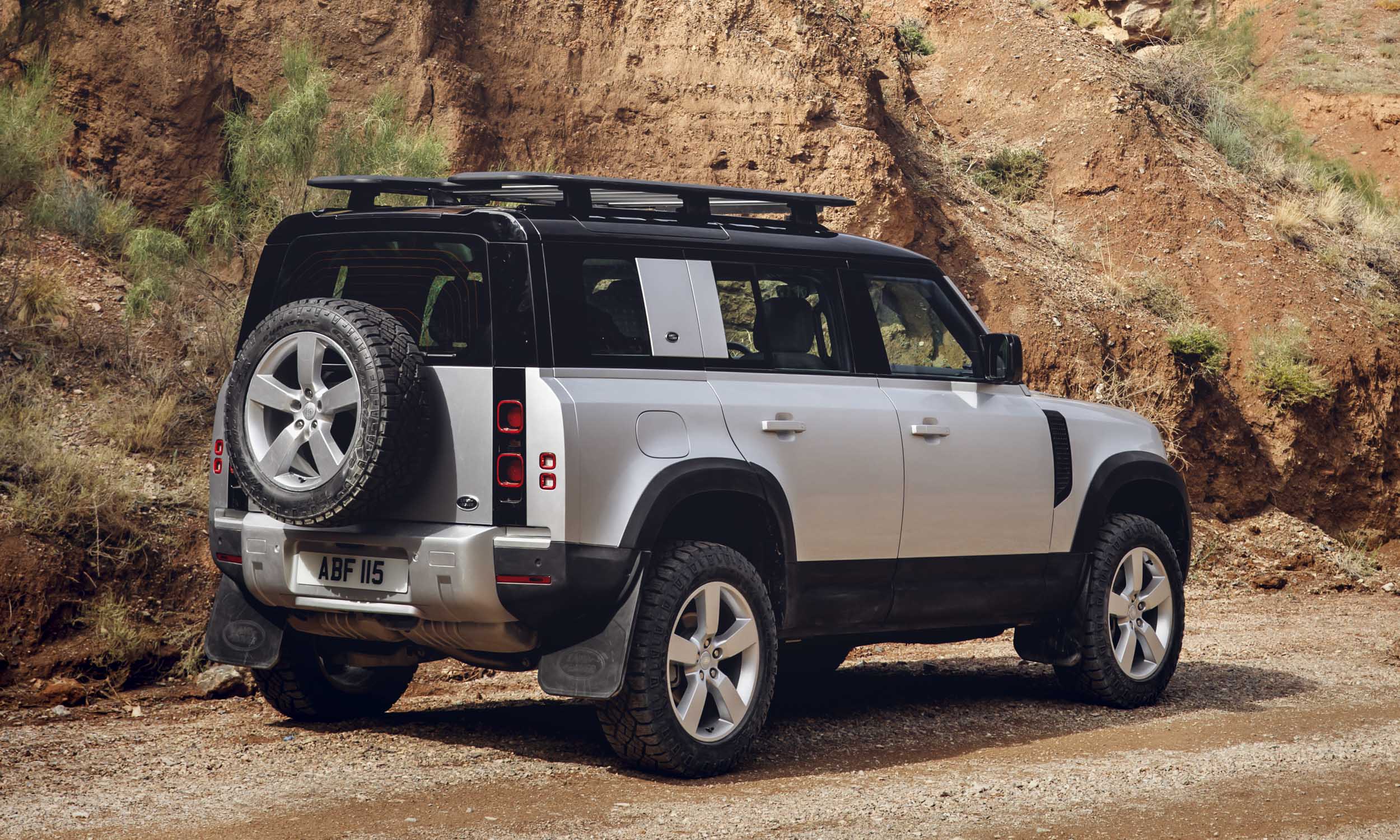 © Jaguar Land Rover Limited
Long Absence
“After too long of an absence, the Land Rover Defender is once again here in the U.S.,” said Jaguar Land Rover North America President and CEO Joe Eberhardt. “In the coming months we will ramp up availability as global circumstances allow. We want to thank all those customers, enthusiasts, retailers, employees and logistics partners for their enthusiasm and commitment to making this a reality. The automotive landscape is certainly brighter with the new Defender in our showrooms, driveways and roads,” Eberhardt noted. 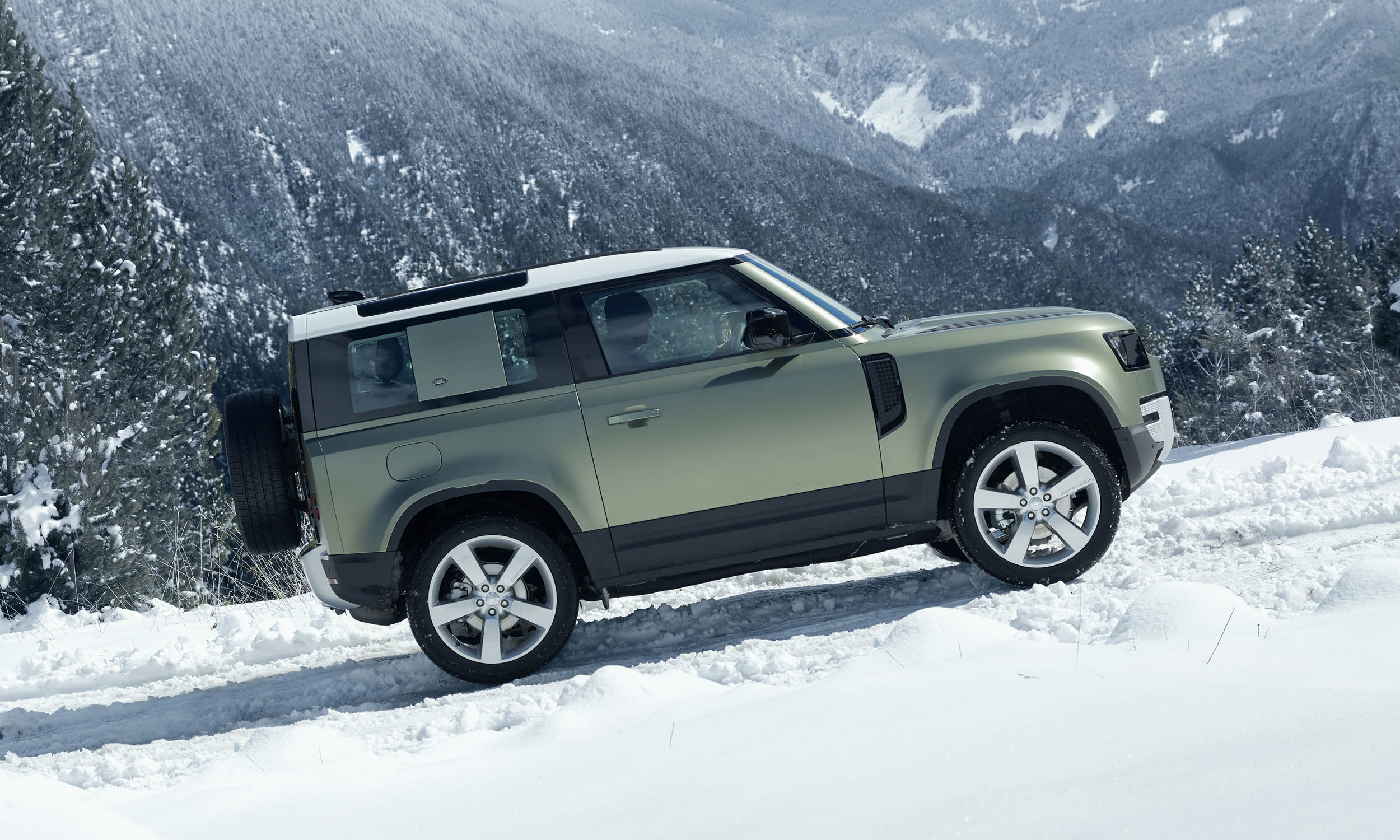 © Jaguar Land Rover Limited
Exterior Design
The new Defender retains its familiar silhouette incorporating short front and rear overhangs for a look easily recognized as a Land Rover Defender. The overall design has a tough appearance, and the high sills, short overhangs and rear-mounted spare facilitate off-road capability. “The new Defender is respectful of its past but is not harnessed by it,” said Land Rover Chief Design Officer Gerry McGovern. “This is a new Defender for a New Age. Its unique personality is accentuated by its distinctive silhouette and optimum proportions, which make it both highly desirable and seriously capable — a visually compelling 4 X 4 that wears its design and engineering integrity with uncompromised commitment,” observed McGovern. 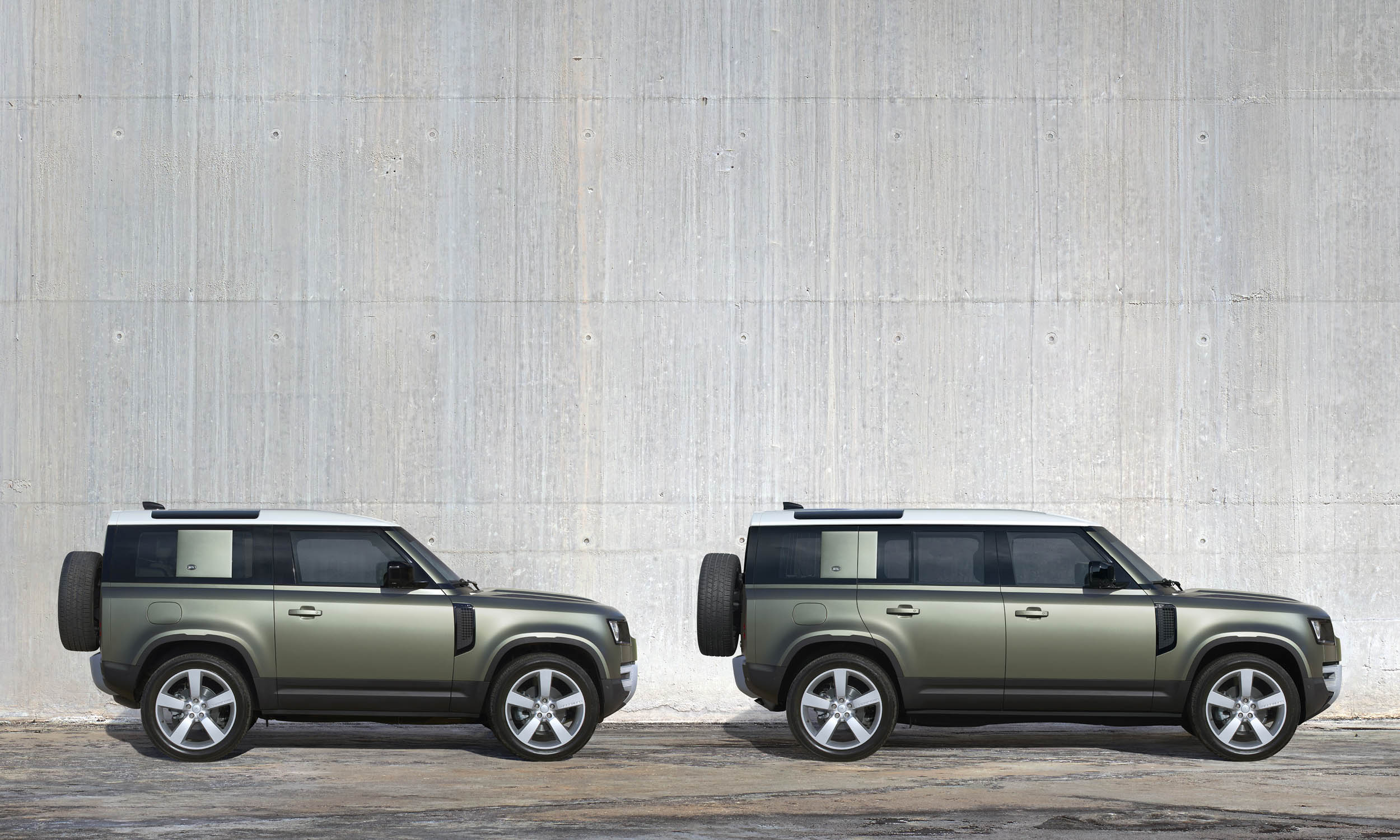 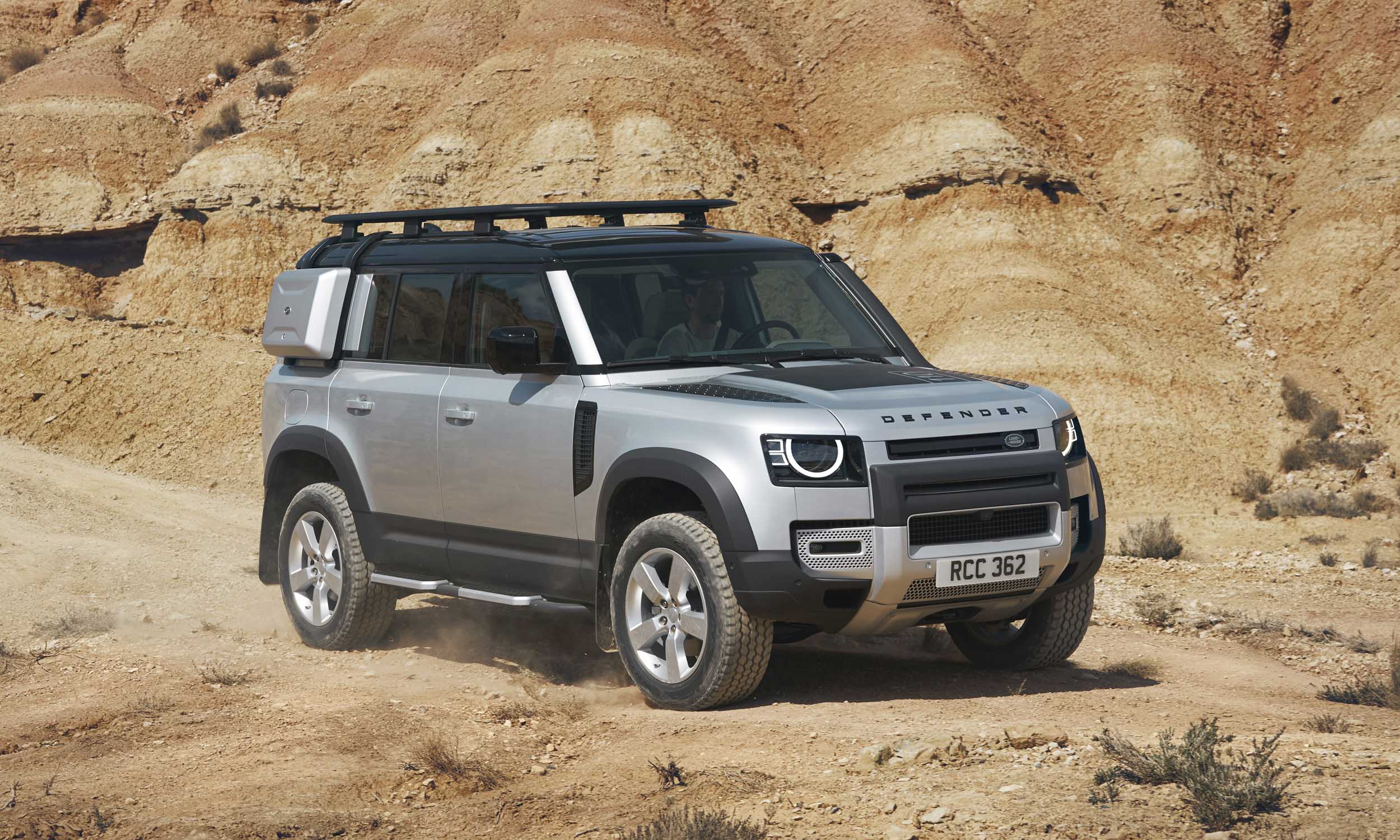 © Jaguar Land Rover Limited
Defender P300
For the U.S. market, Defender will be offered with two powertrain options designated Defender P300 and Defender P400. The Defender P300 is powered by a turbocharged 2.0-liter inline 4-cylinder engine producing 296 horsepower, combined with an 8-speed ZF automatic transmission and 2-speed transfer case. According to Land Rover numbers, the Defender P300 will accelerate from zero to 60 mph in 7.7 seconds. 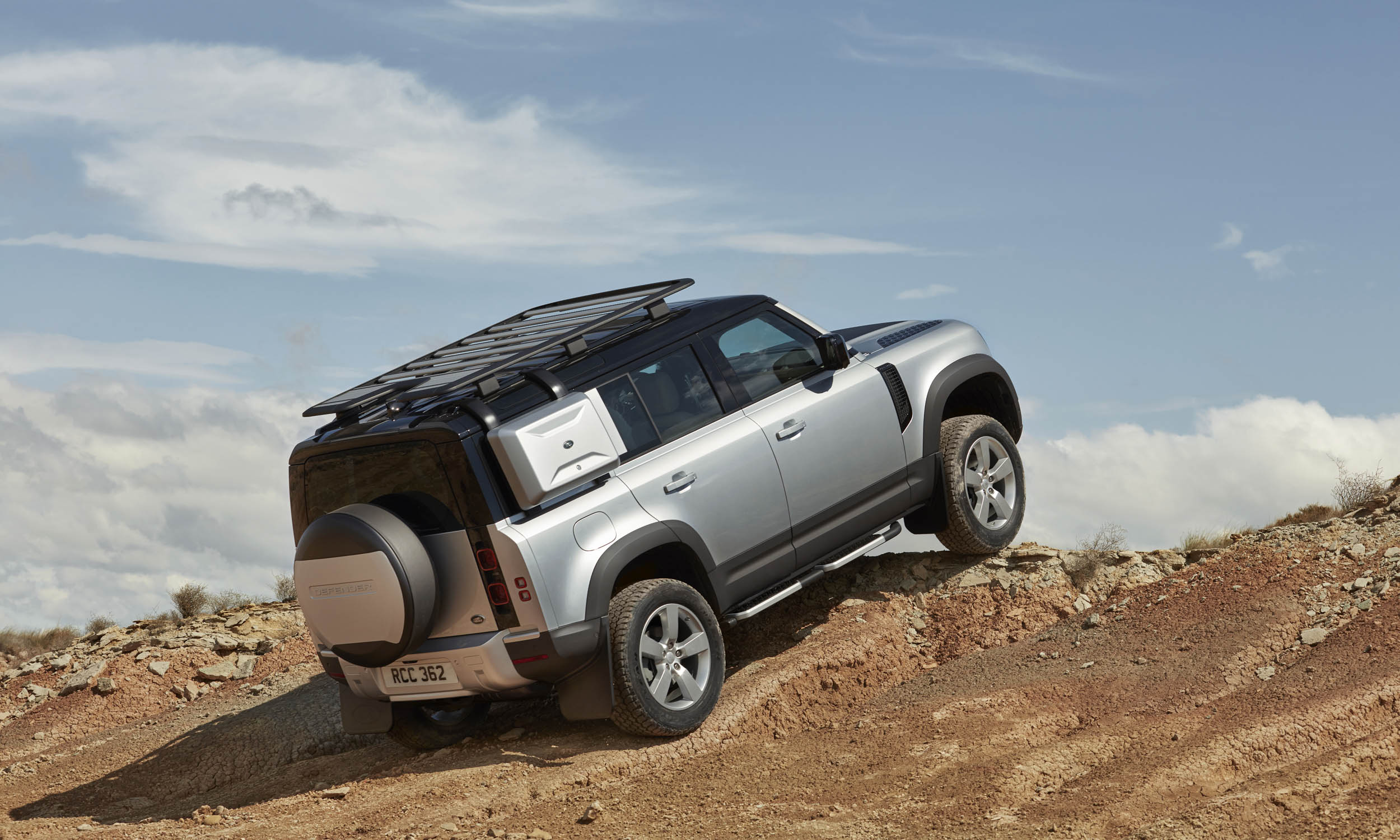 © Jaguar Land Rover Limited
Defender P400
The Defender P400 features a mild-hybrid powertrain with an inline 6-cylinder engine that utilizes both a twin-scroll turbocharger and a 48-volt electric supercharger with a combined output of 395 horsepower and 406 lb-ft of torque, mated with an 8-speed ZF automatic transmission and 2-speed transfer case. The P400 also features a belt-integrated started motor that assists the gasoline engine under acceleration and eliminates the need for an alternator. The 48-volt battery stores energy captured from braking as the vehicle slows down. According to Land Rover, the Defender P400 will accelerate from zero to 60 mph in 5.8 seconds. 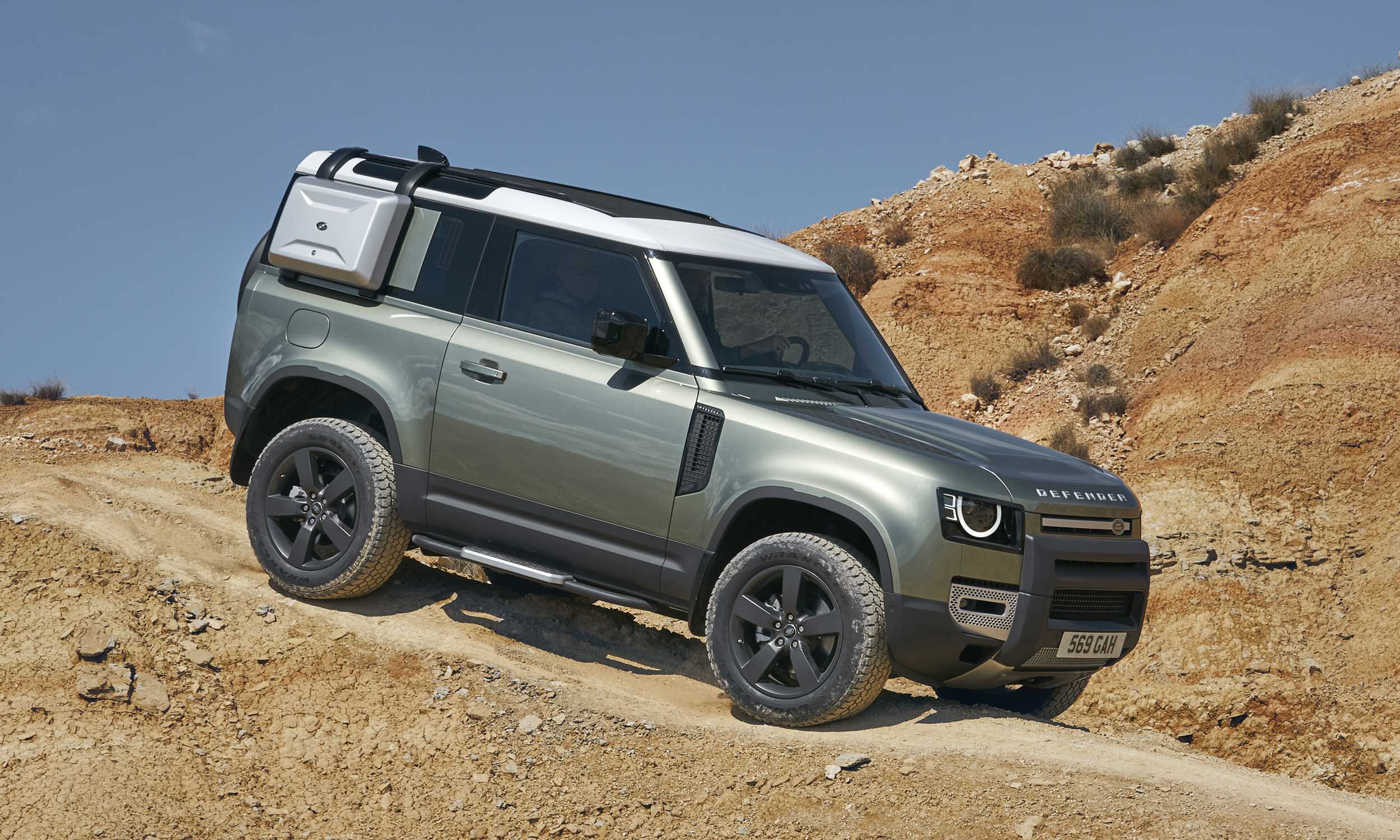 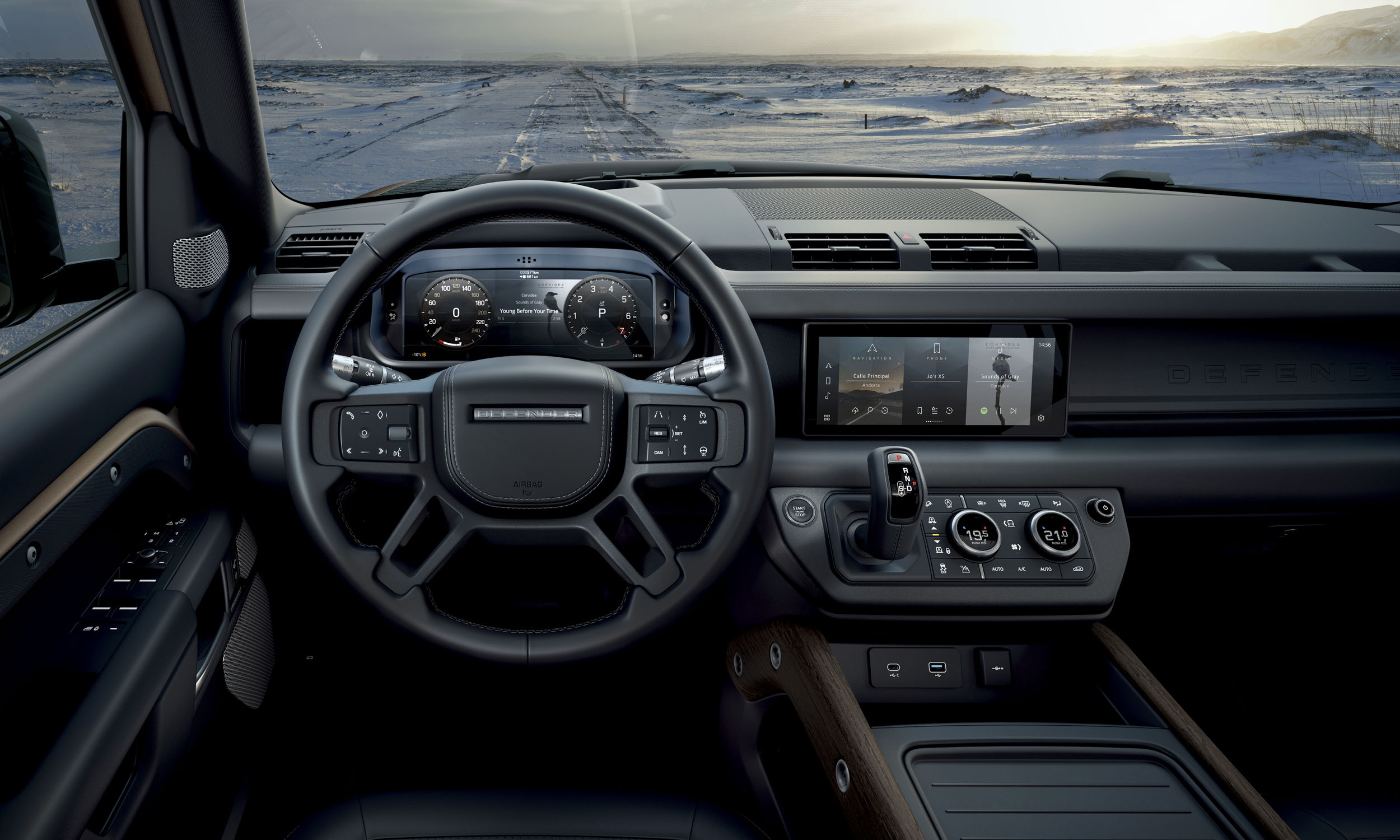 © Jaguar Land Rover Limited
Interior Design
Inside, the new Defender offers a highly functional layout with exposed structural elements and rubberized floor coverings. The exposed powder-coated magnesium crossbeam is key to the overall strength of the body structure, which is available in different finishes with integrated grab handles. The central touchscreen and main controls are contained within a magnesium frame and allow movement across the cabin as well as the optional center seat. The painted doors are partially exposed; various center console options are offered. 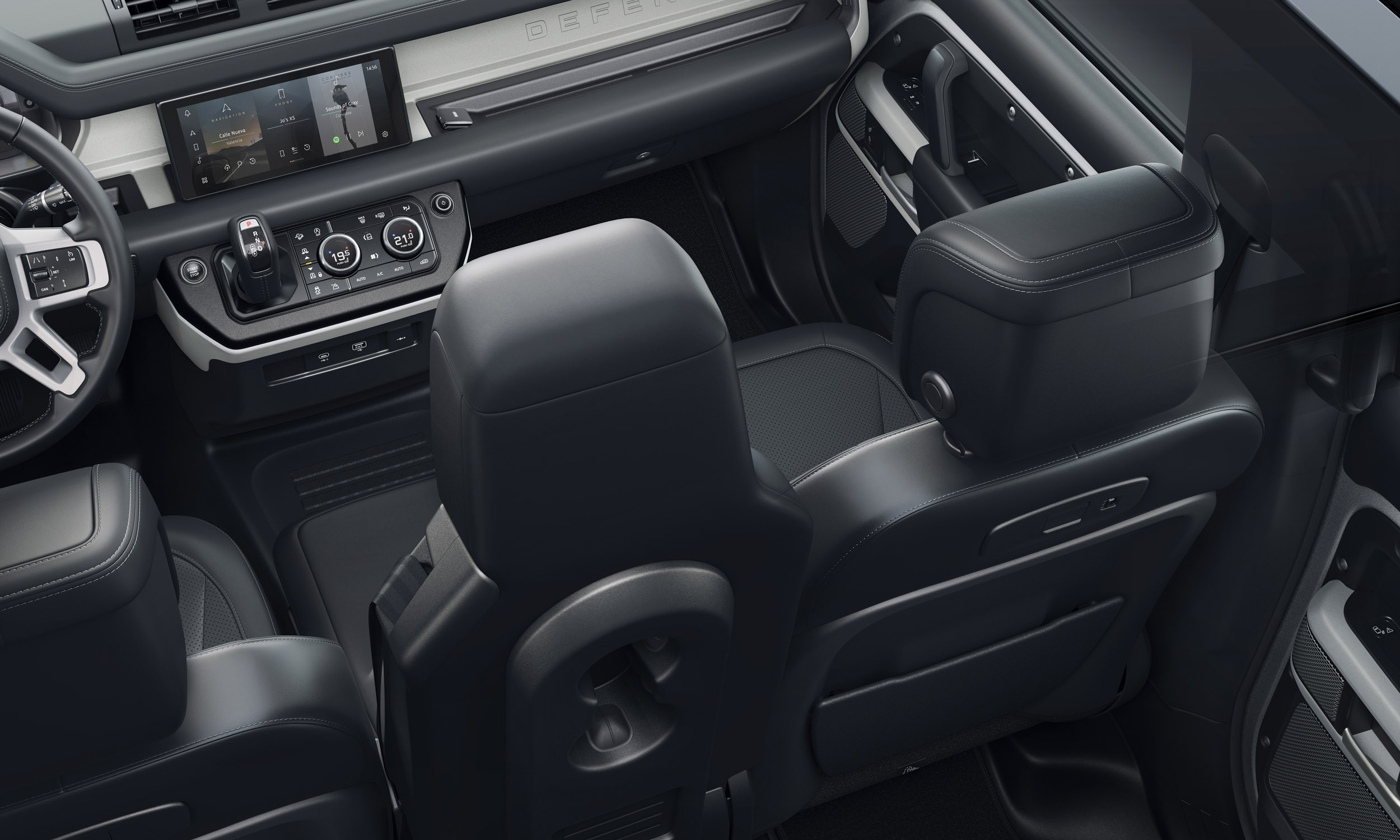 © Jaguar Land Rover Limited
Flexible Seating
The Defender 110 offers three seating options with 5, 6 or 5+2 seating. The 6-seat option features a front-row center seat. When not in use, the front center seatback can be folded down to provide an armrest, additional storage and two additional cupholders. The Defender 90 offers 5- or 6-occupant seating options. 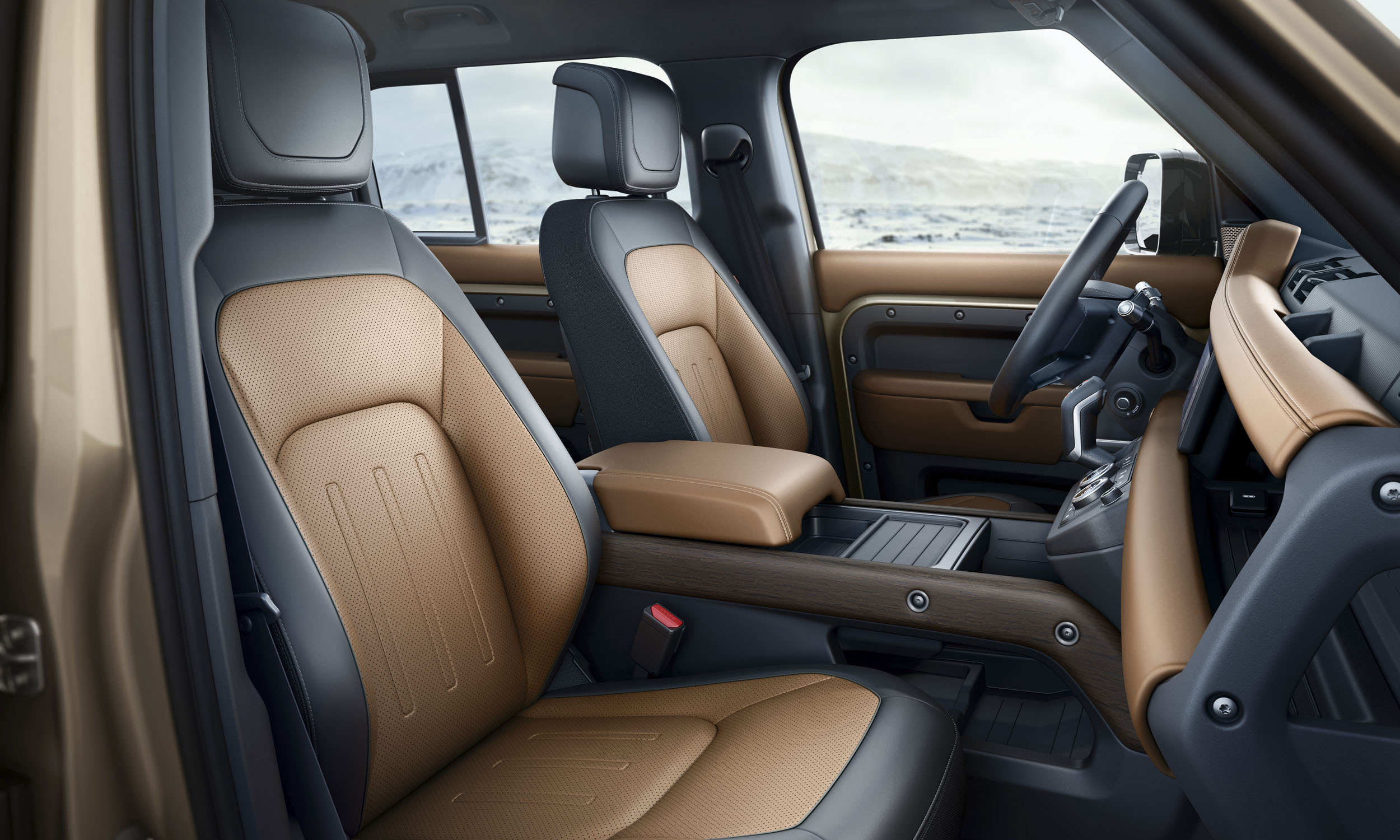 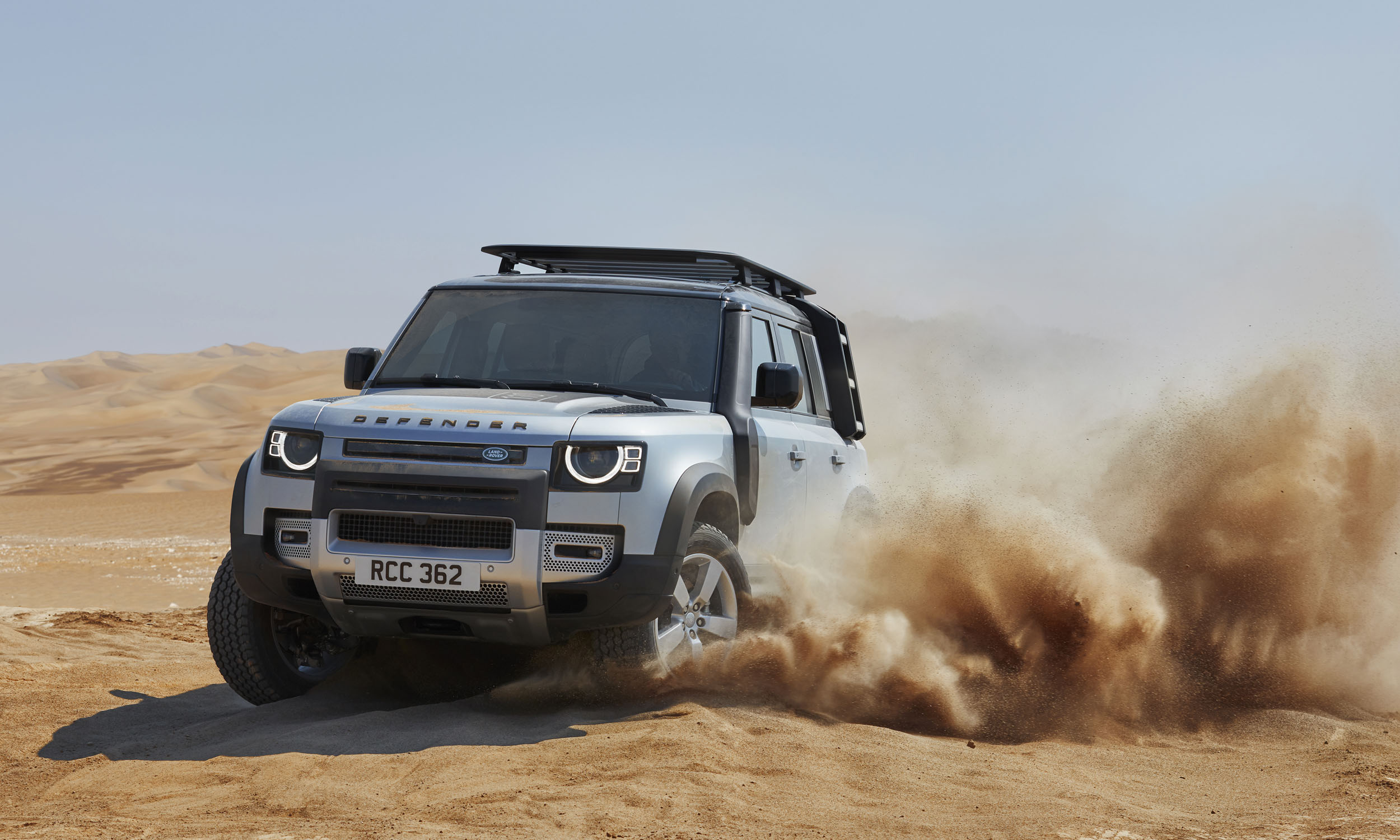 © Jaguar Land Rover Limited
Terrain Response
Land Rover’s Terrain Response 2 system is the first off-road configurable Terrain Response that allows the driver to tailor the system individually according to off-road situations and includes standard Wade Sensing. The driver can choose a center limited-slip differential or a rear limited slip, as well as three settings for throttle response, gearbox response, steering and traction control. Up to four individual profiles can be saved. The Terrain Response 2 Auto function recognizes the drive surface and adjusts the settings with no additional input from the driver. Land Rover All-Terrain Progress Control maintains a low crawl speed, and ClearSight Ground View shows the area directly in front of the vehicle on the center touchscreen. 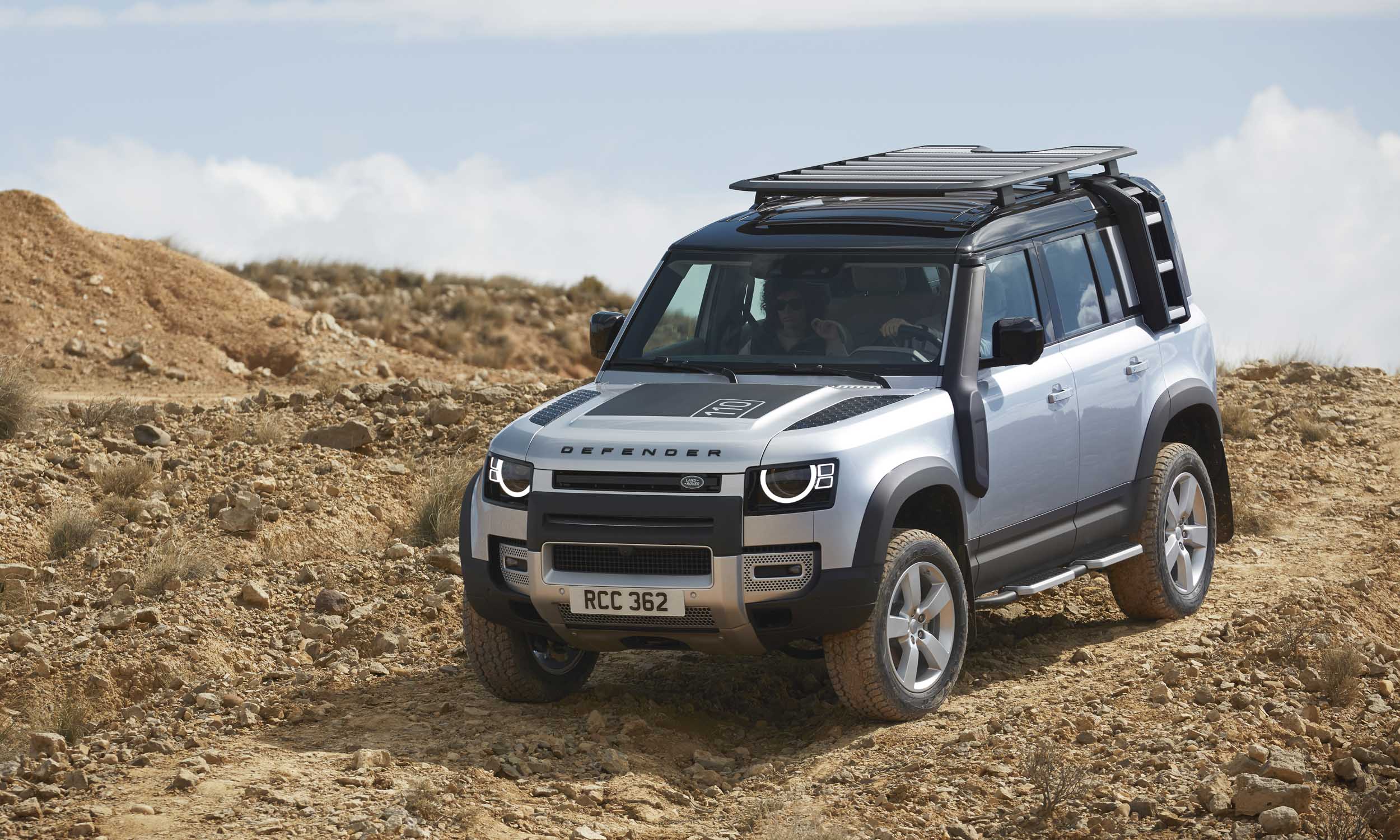 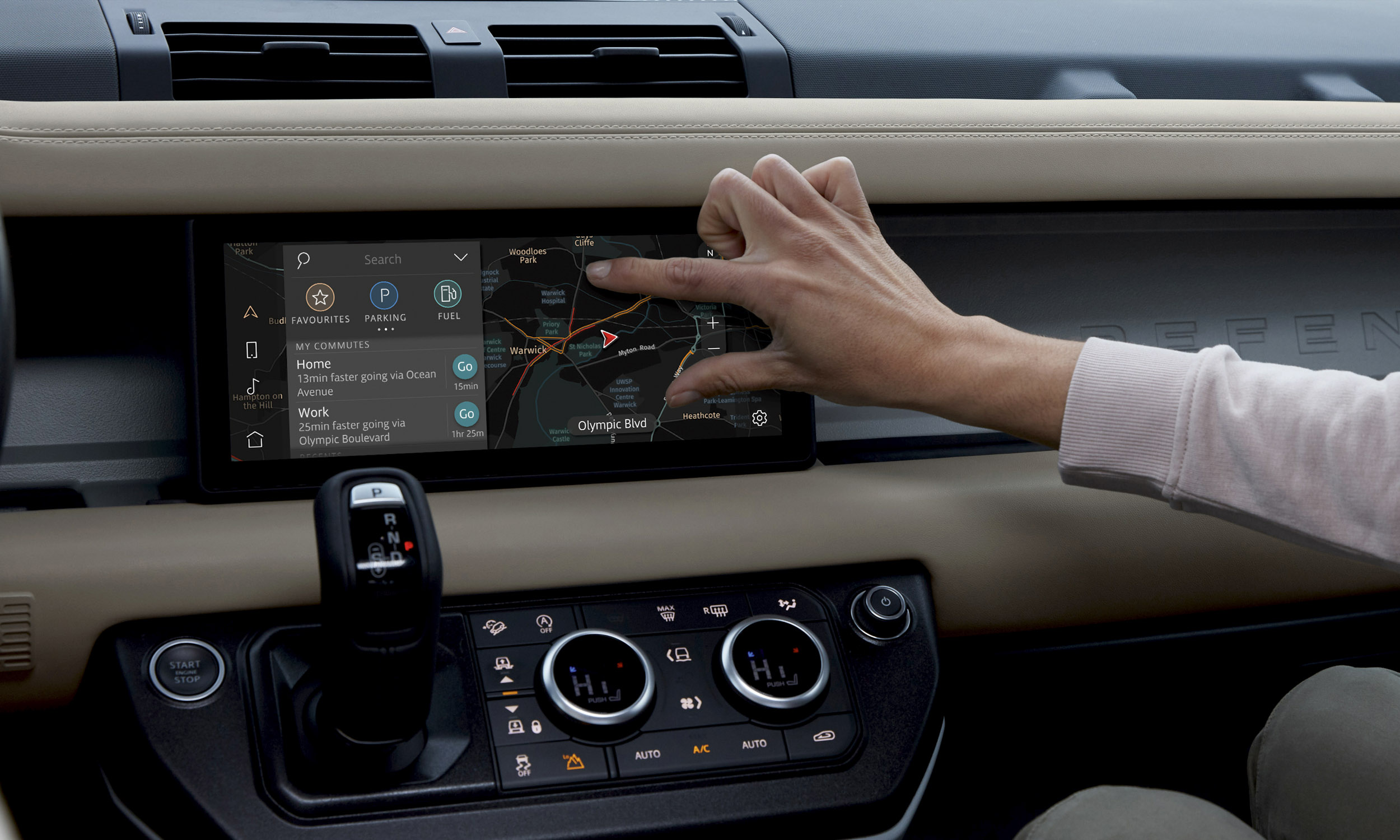 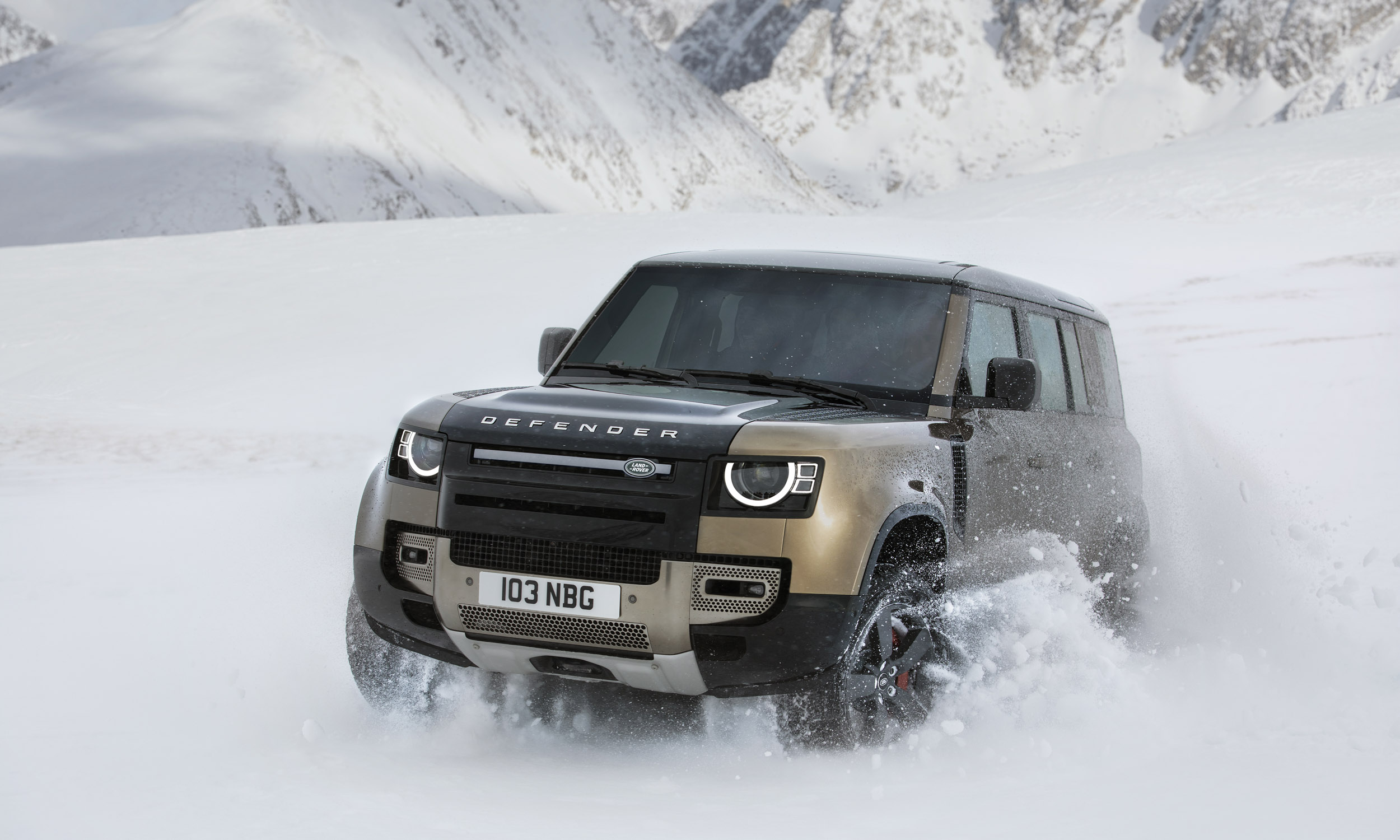 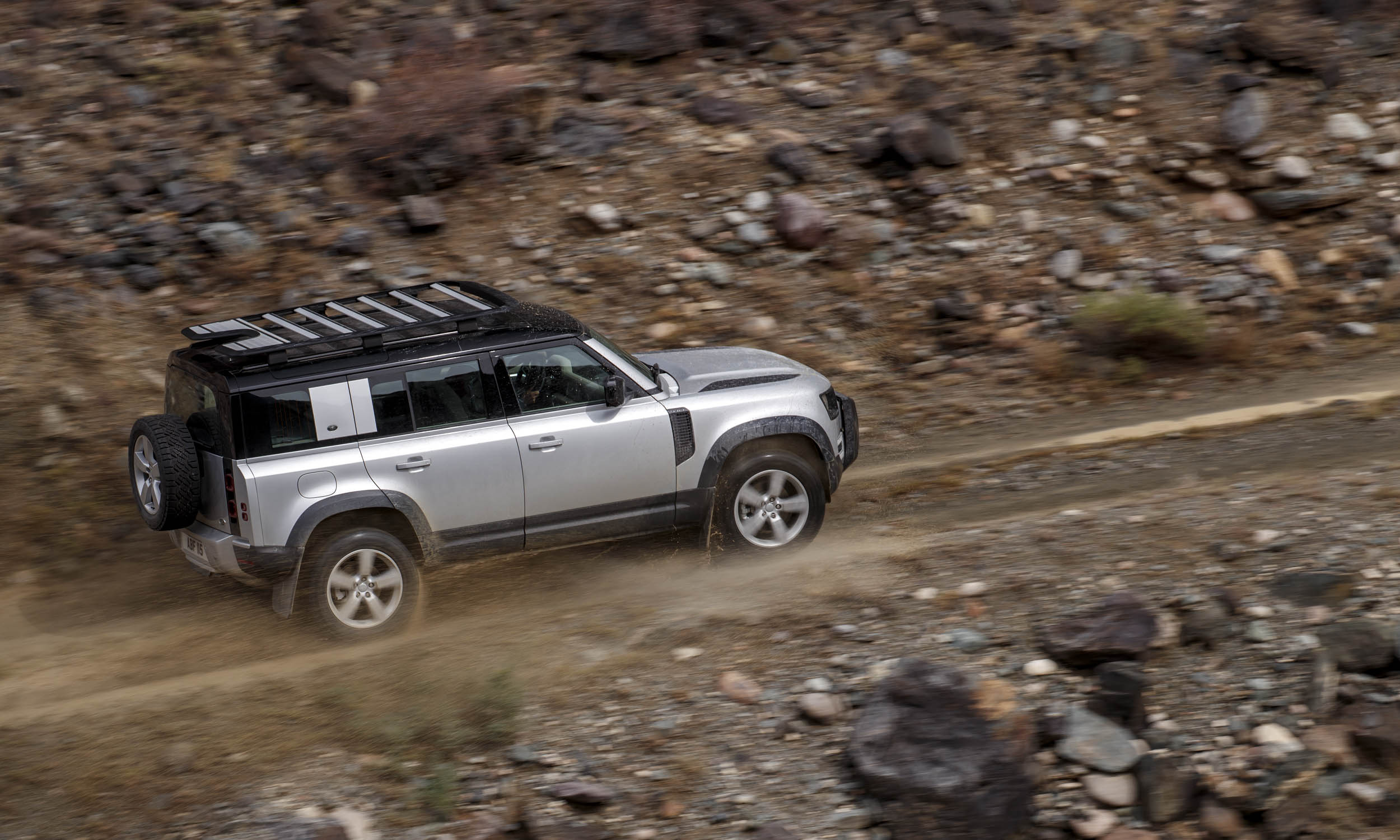 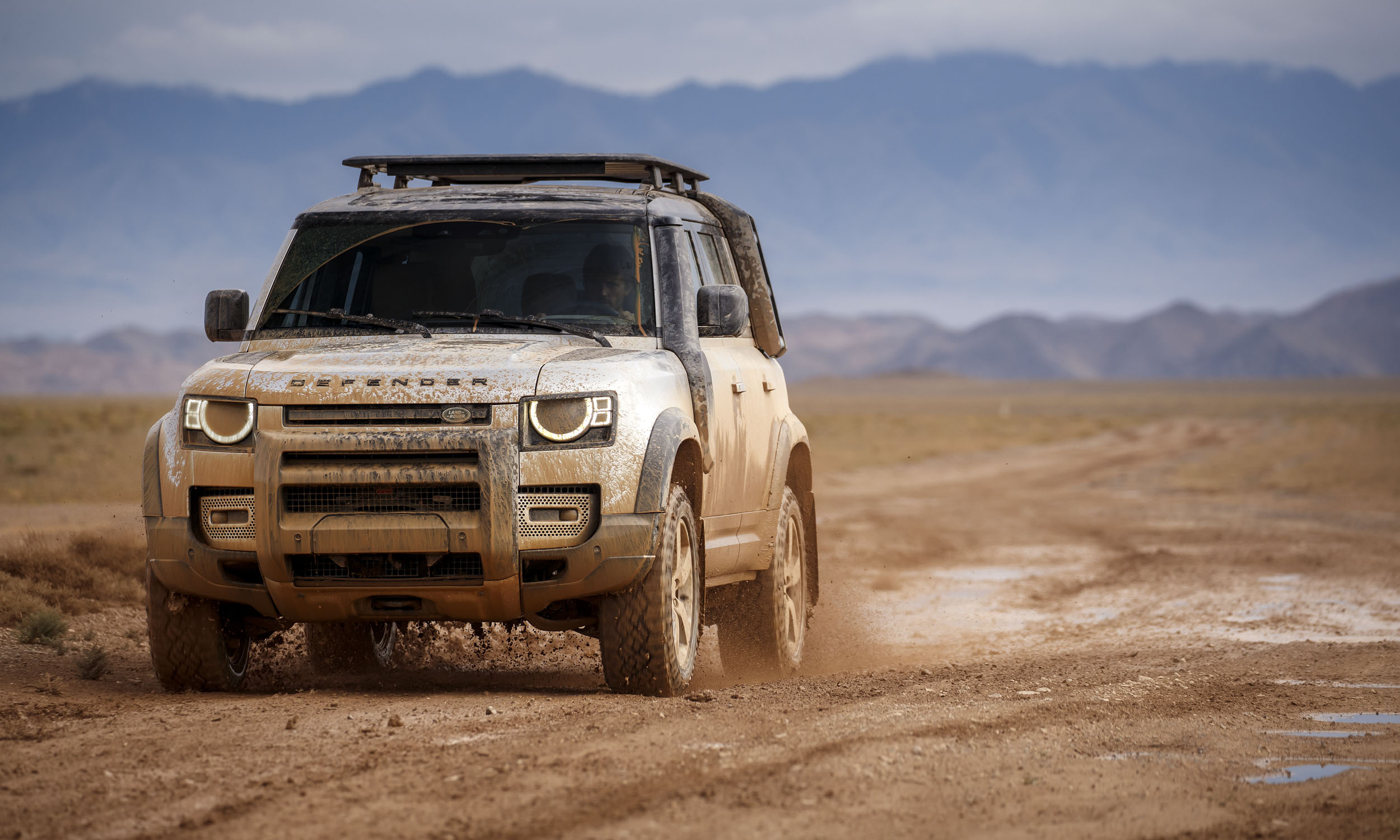 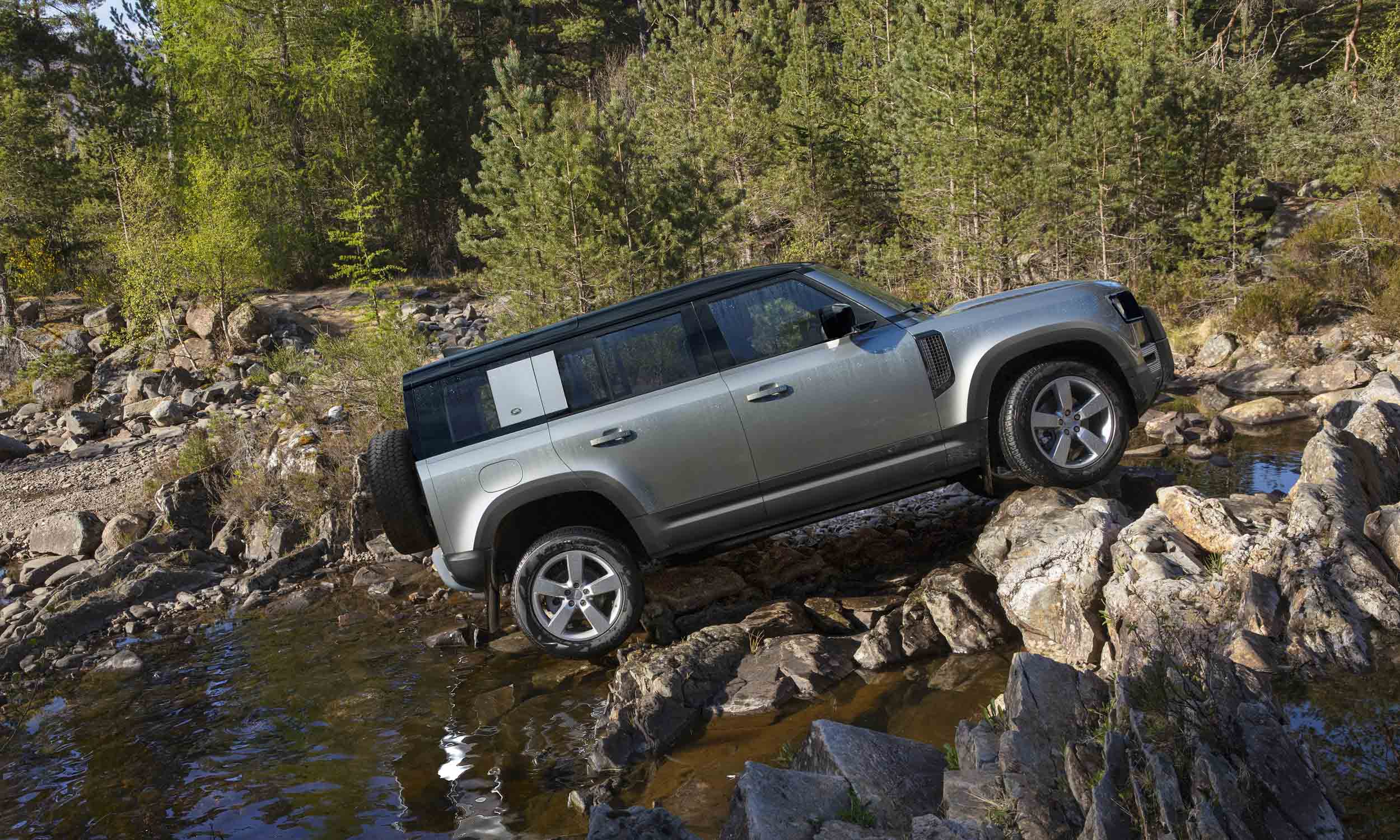 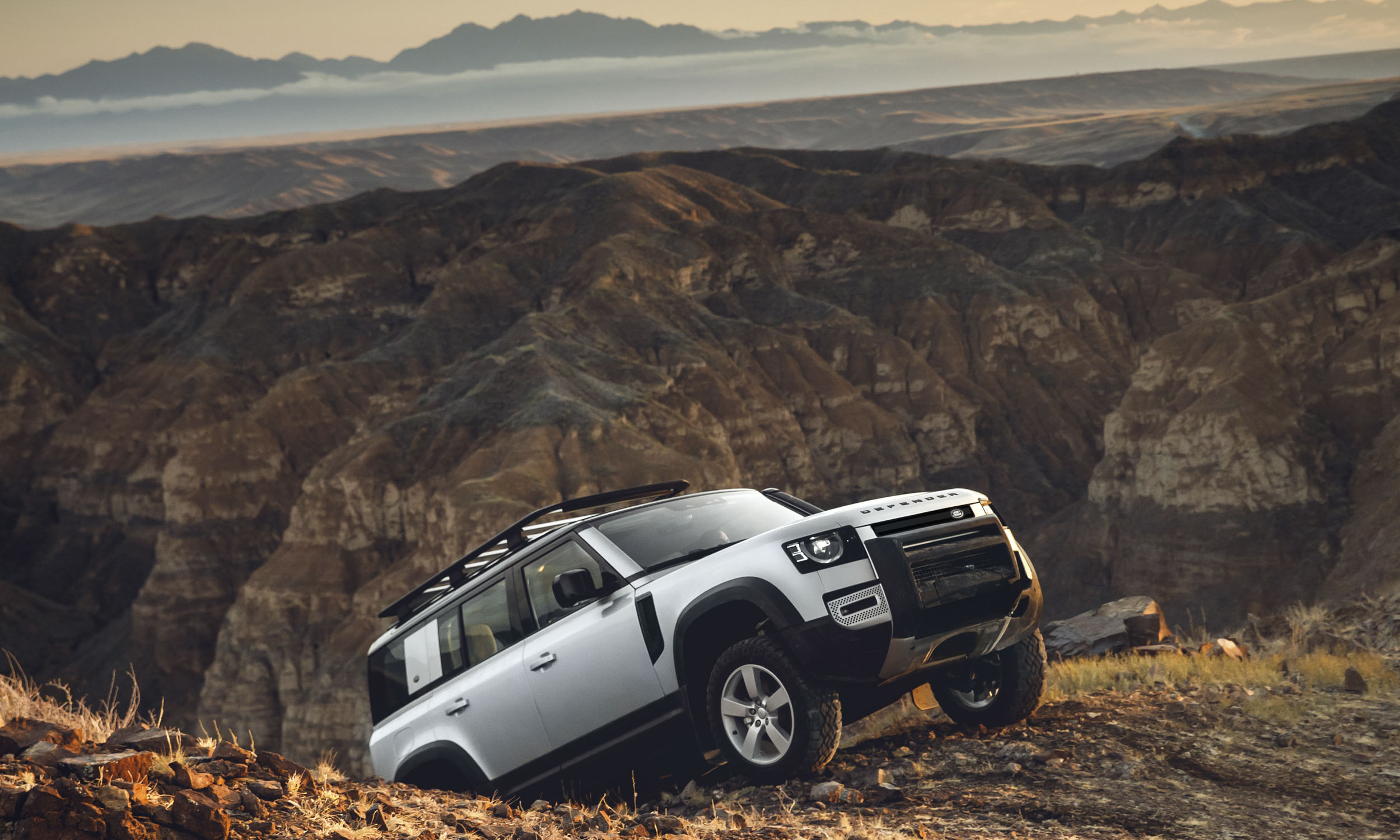 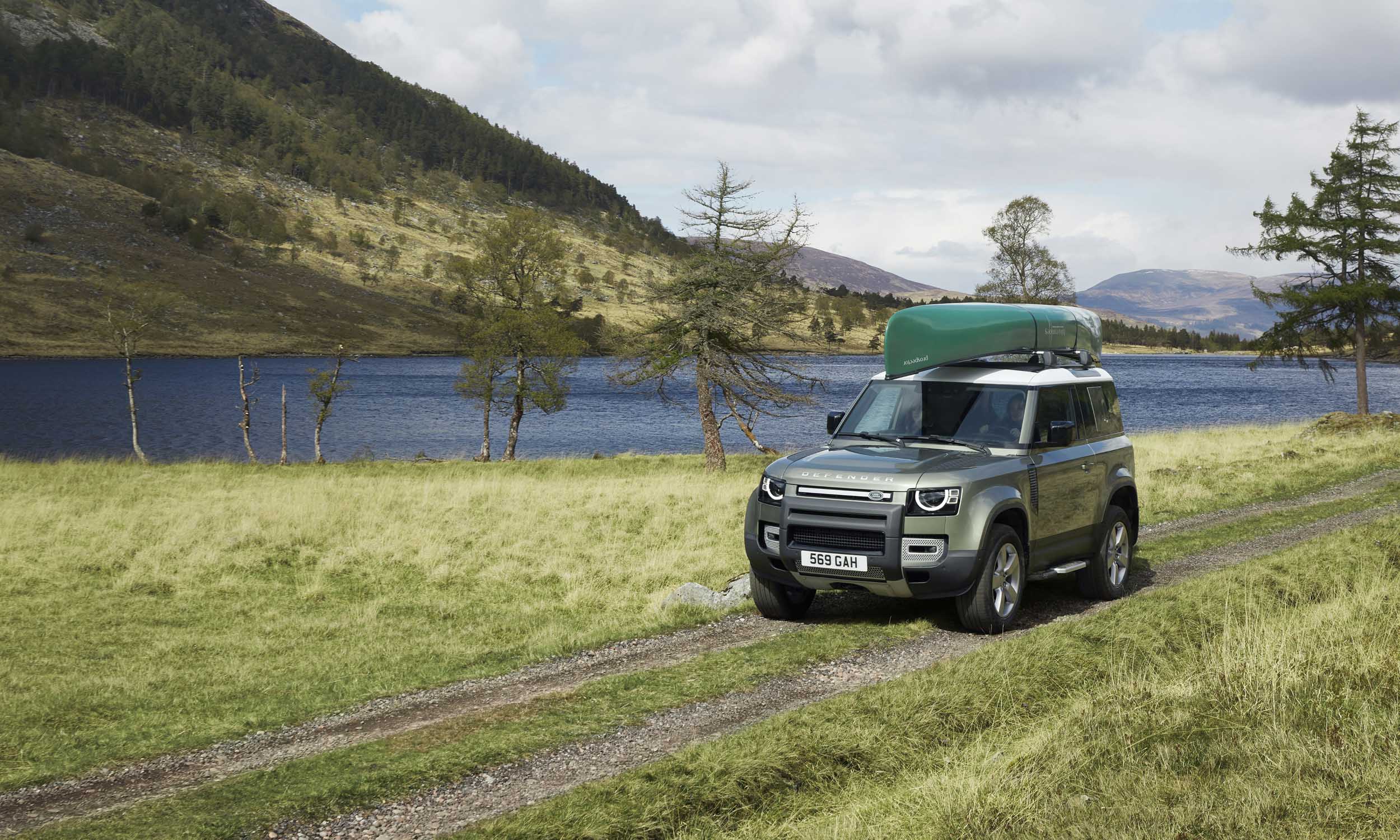 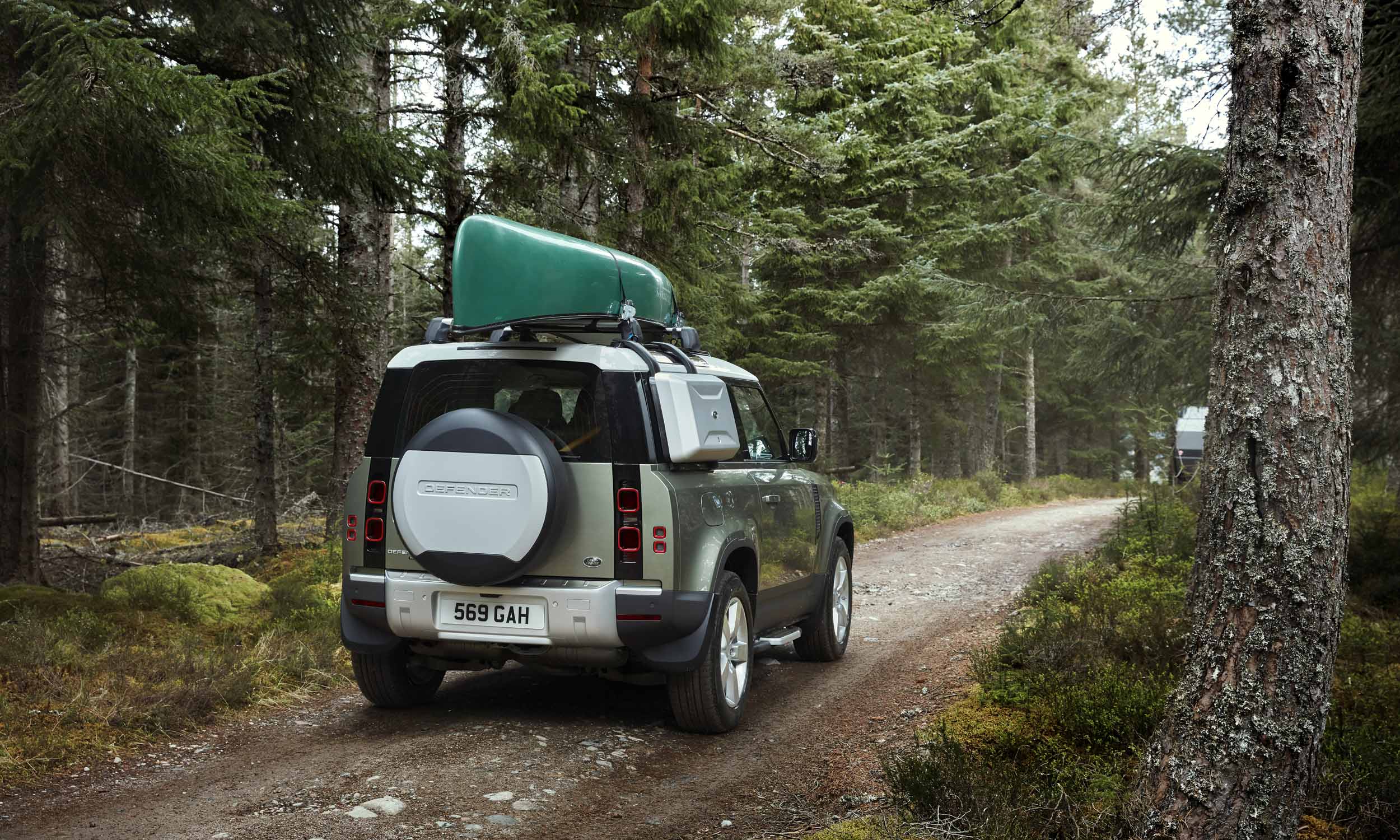 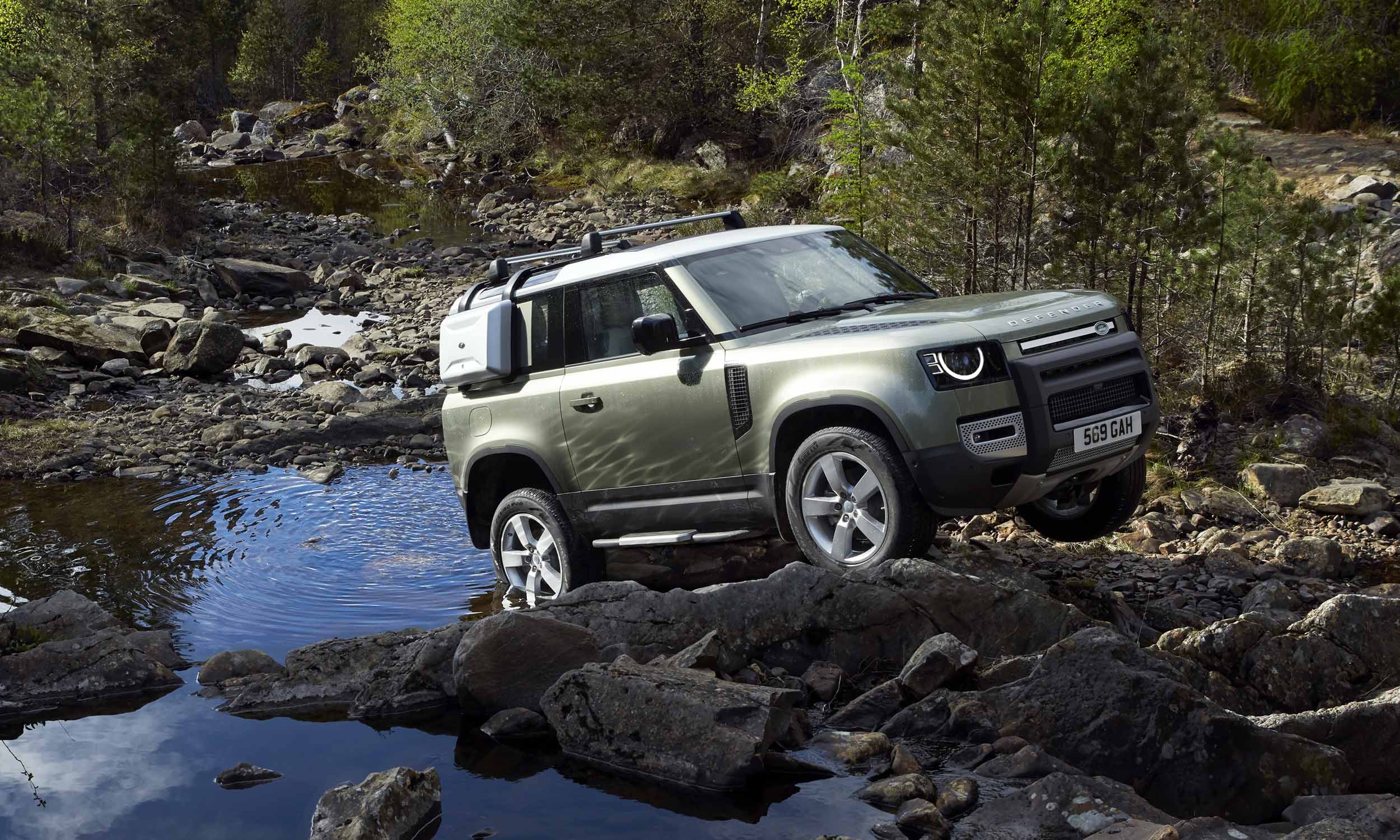 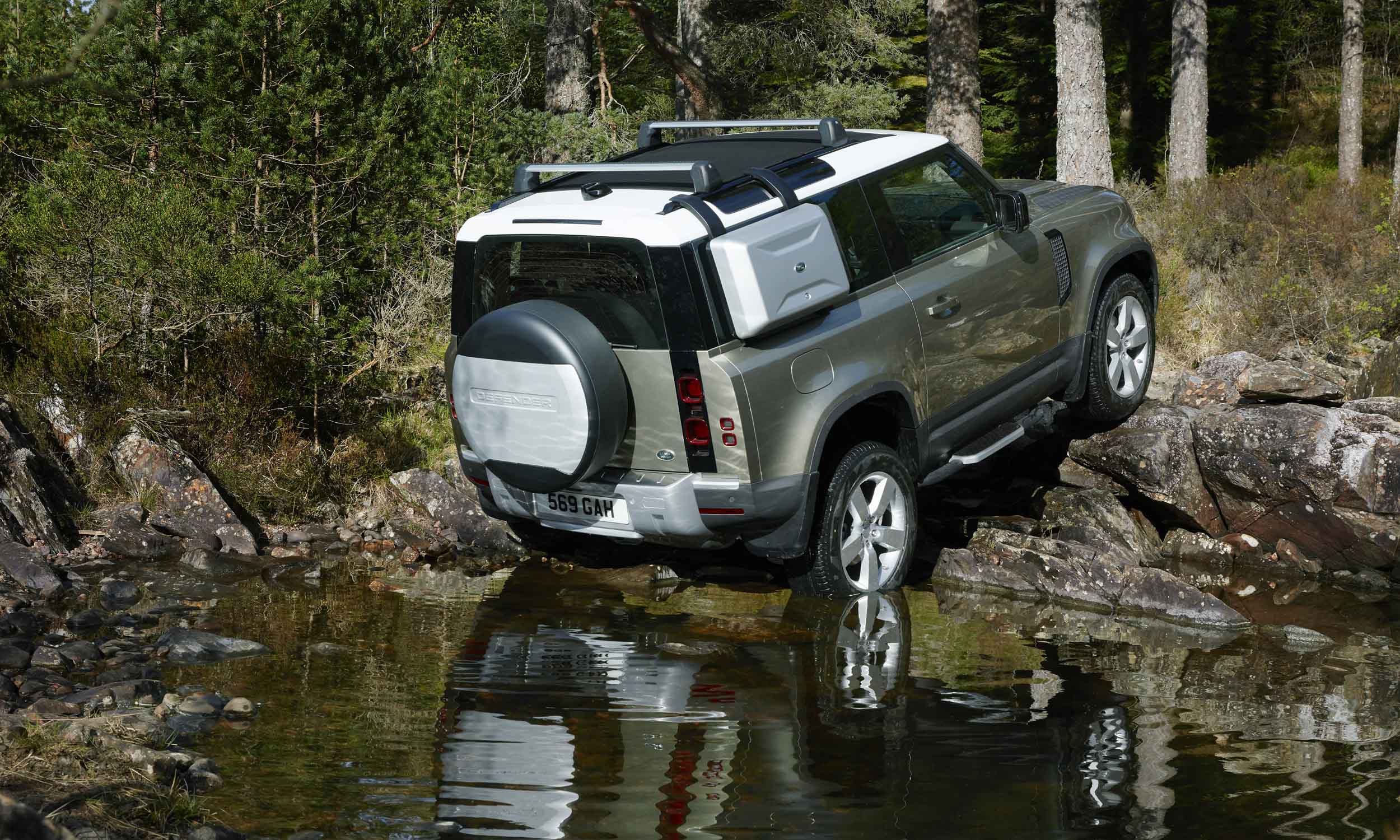 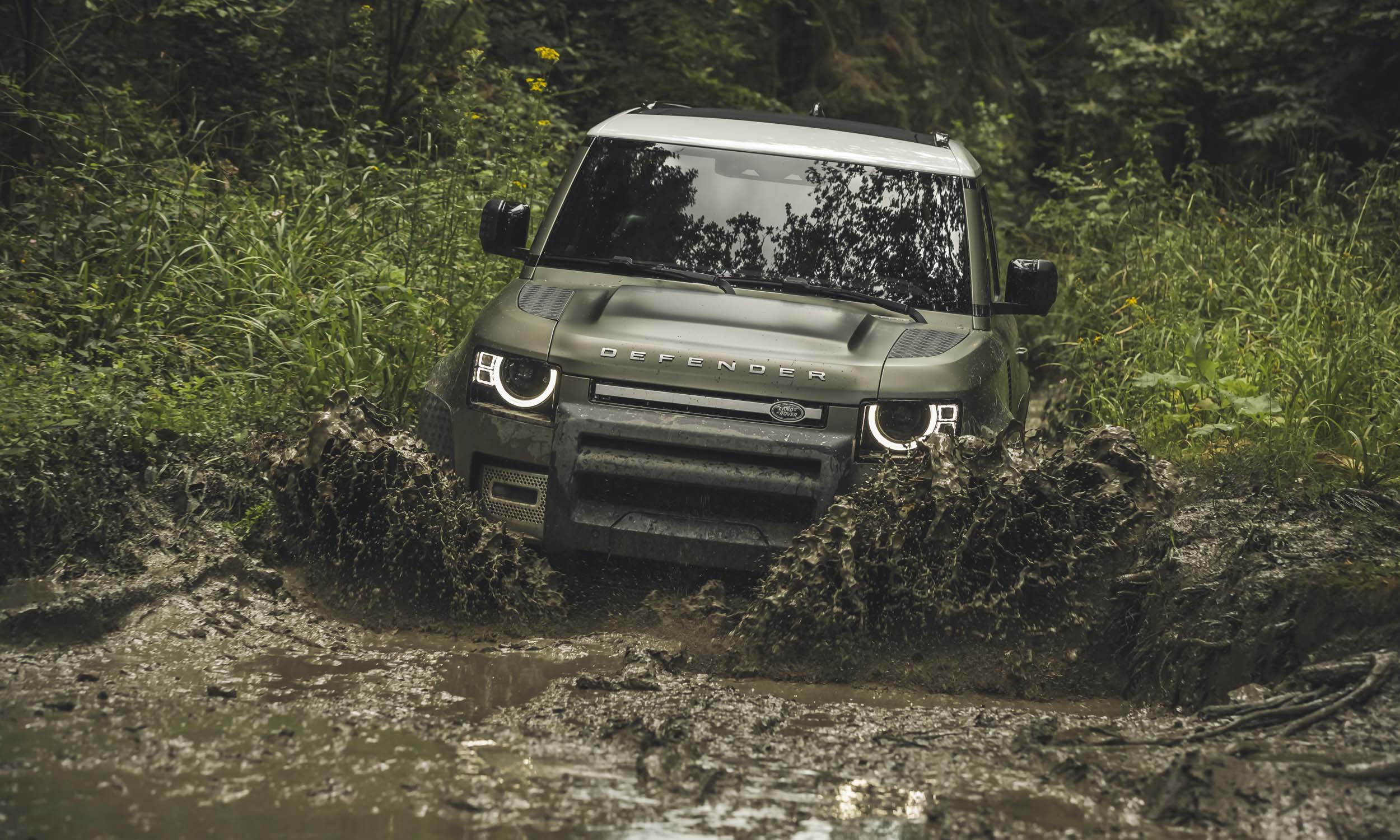 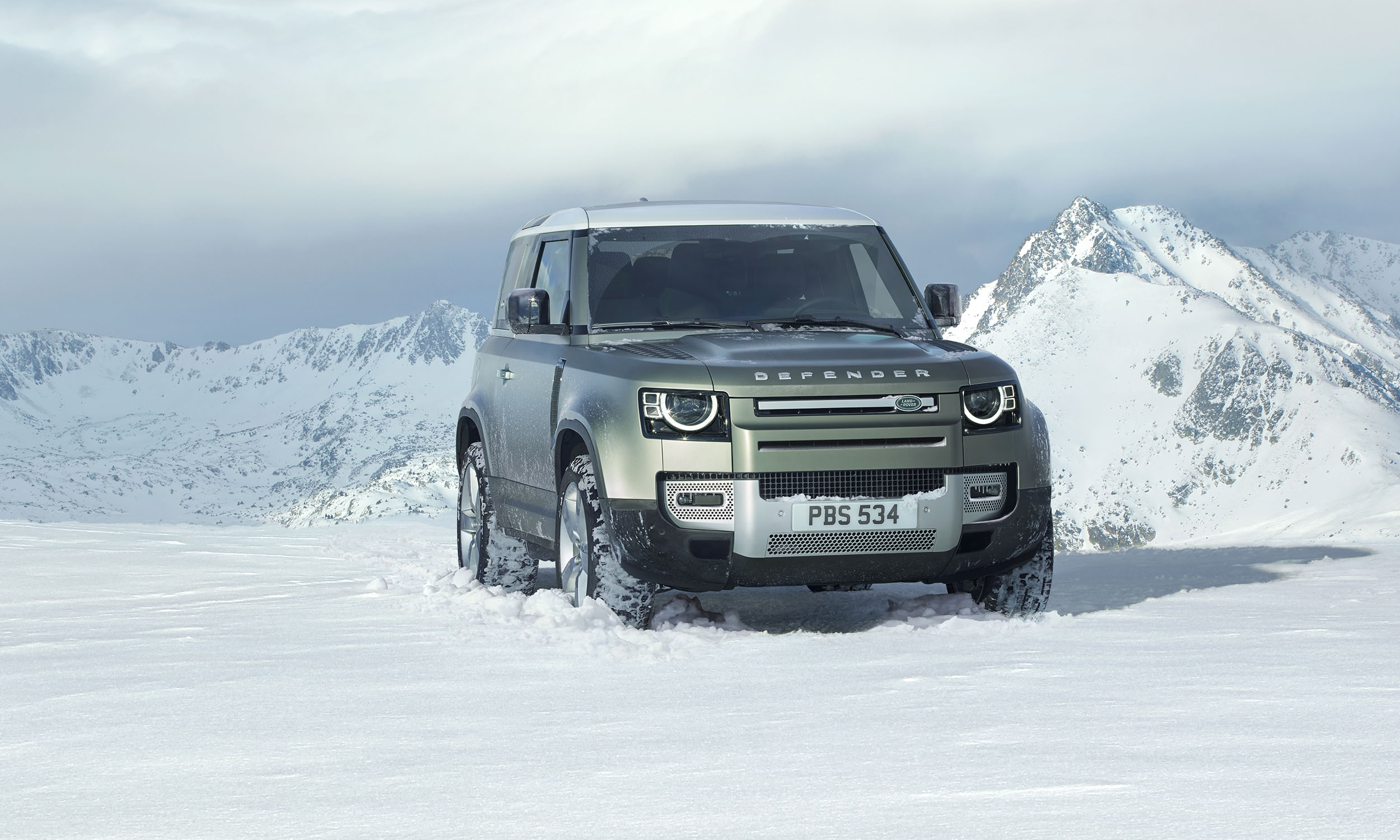 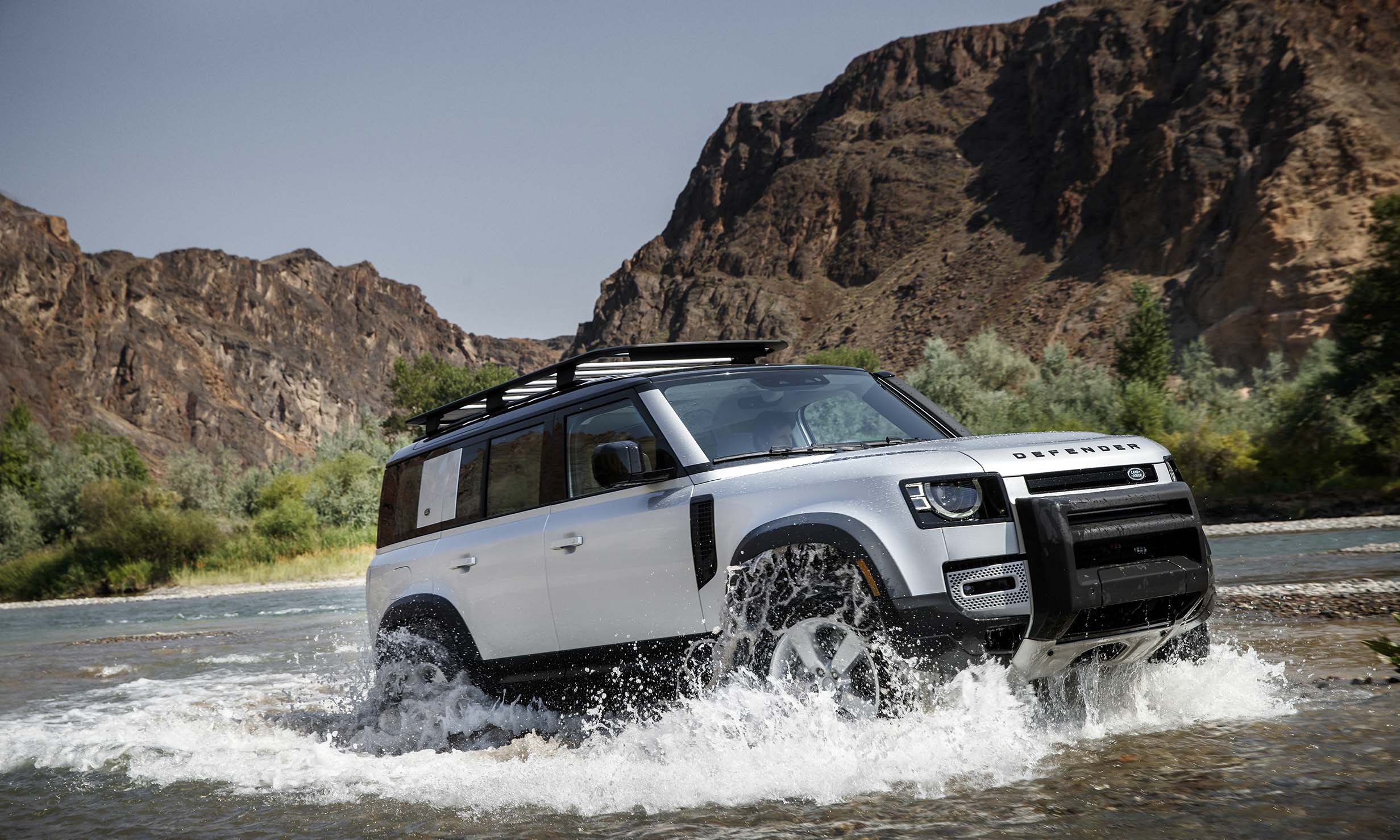 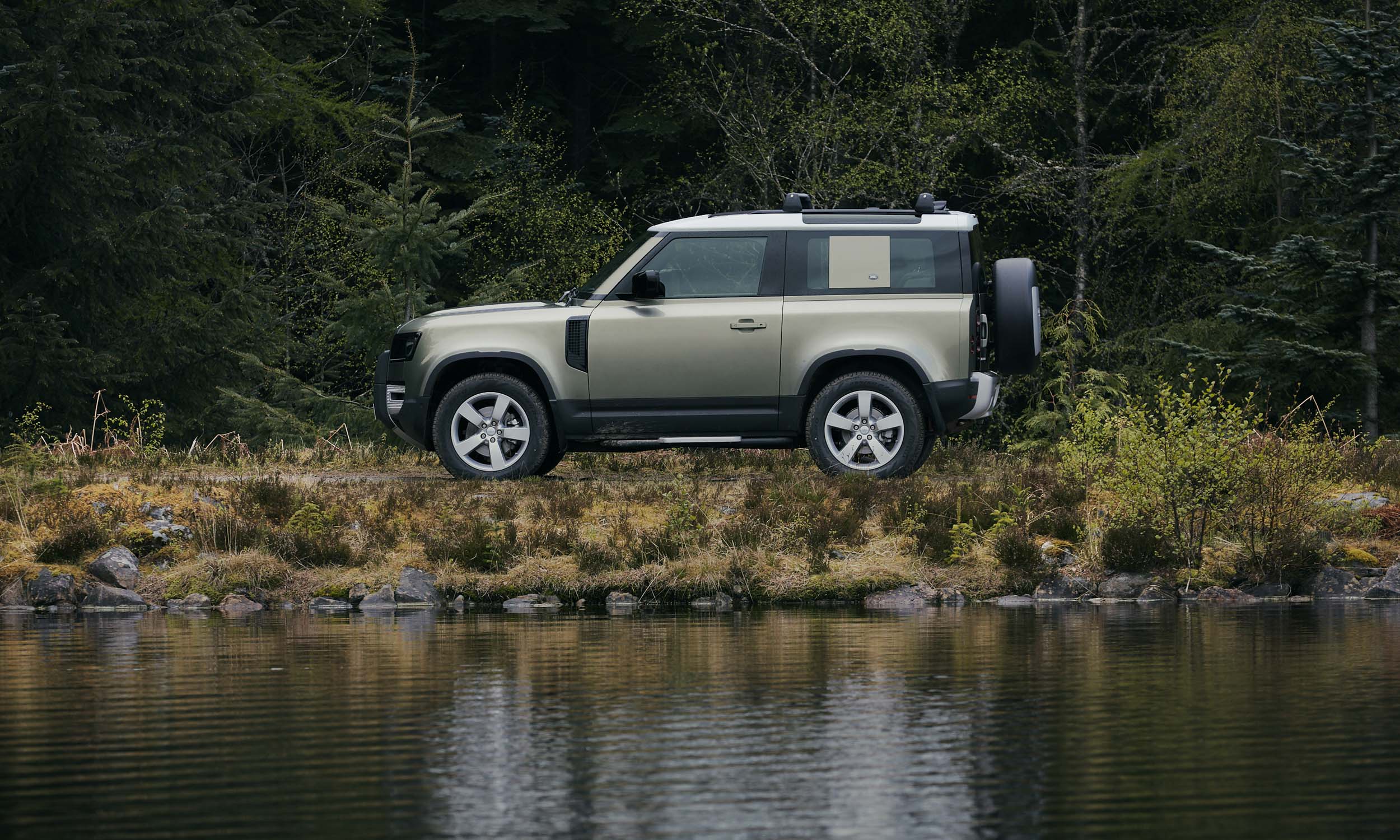 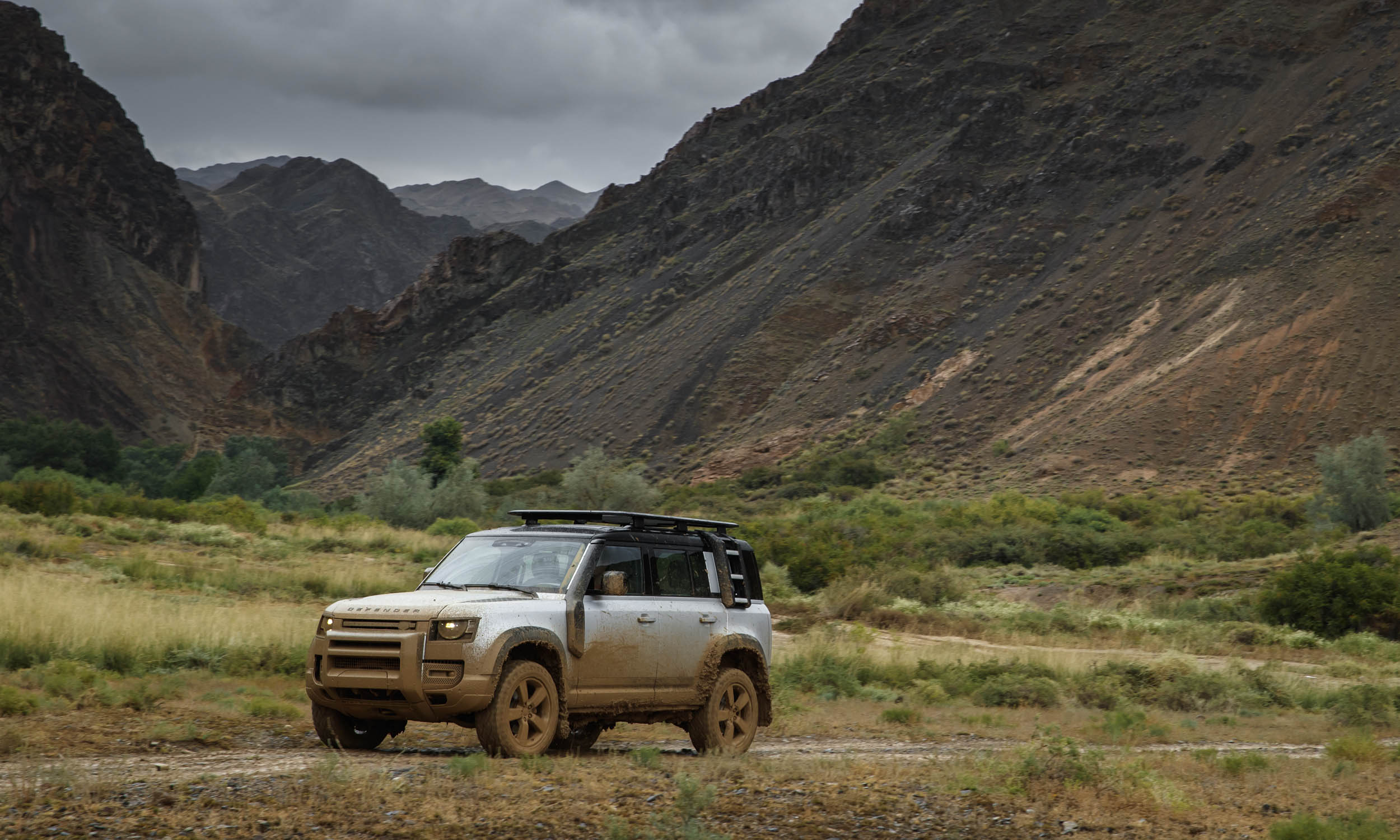 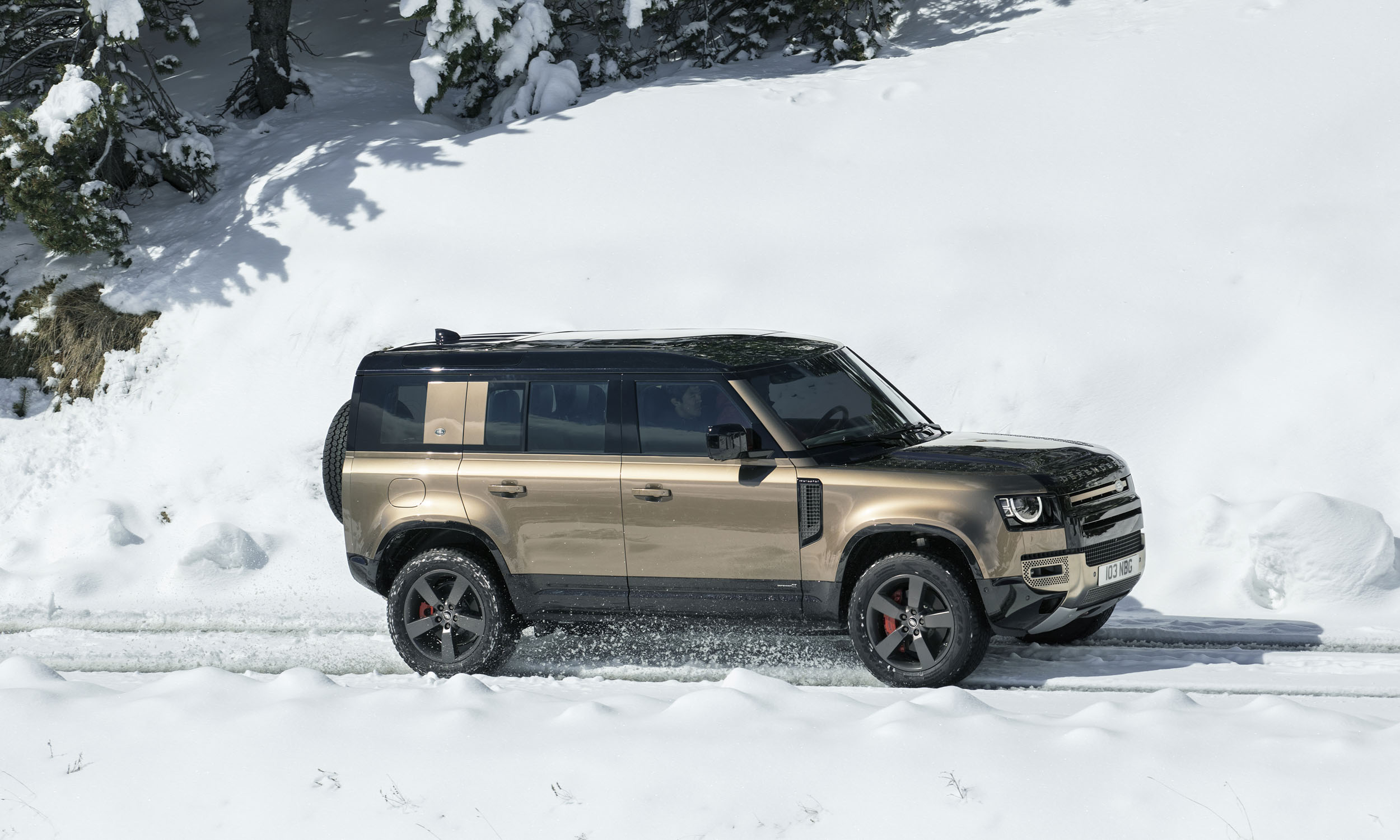 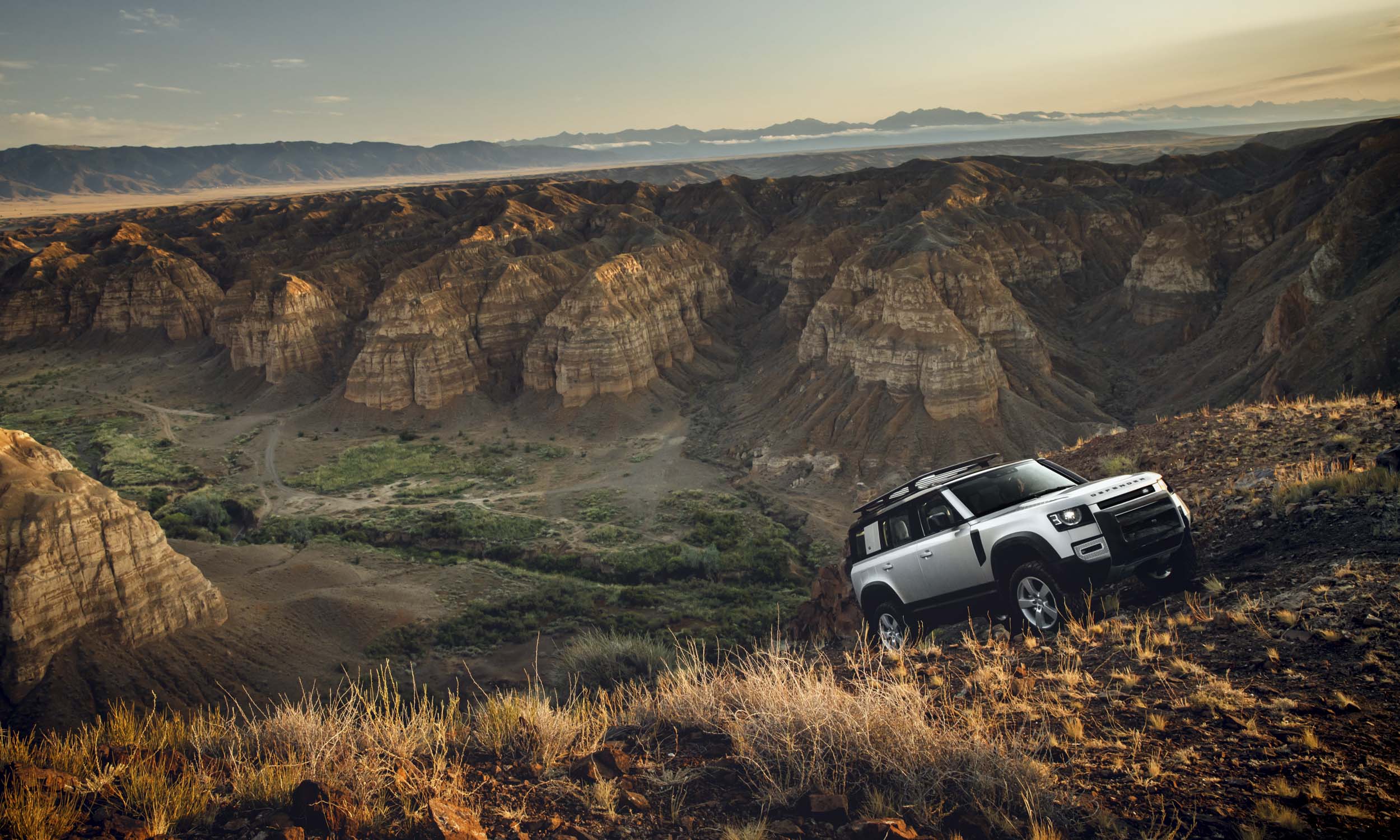