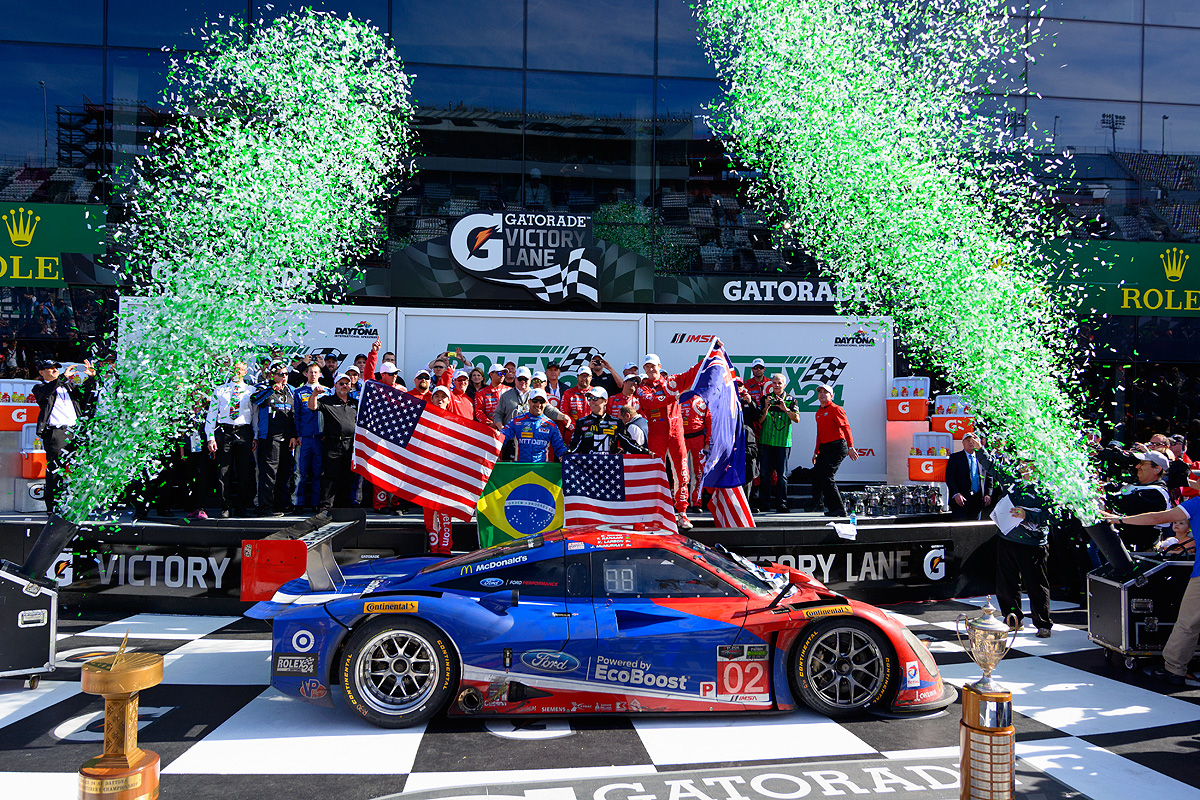 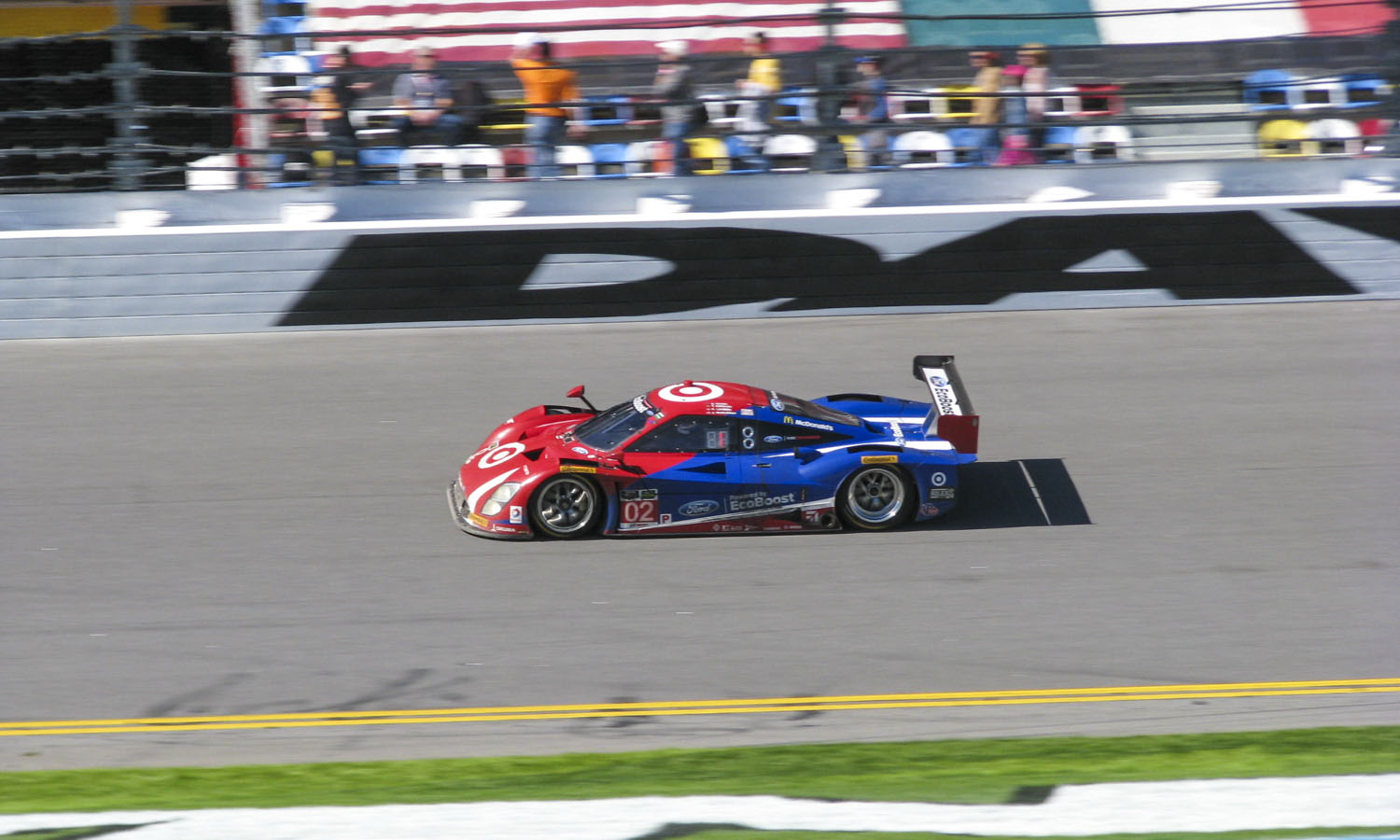 The No. 02 Ganassi Ford EcoBoost Riley during the final hours on Sunday.

The win earned a record sixth overall Rolex 24 win for Ganassi Racing. Dixon began the 24-hour battle with a decisive move, taking the lead into the first corner from his outside front row starting position and dominating the first 24 laps of the race.

The Rolex 24 at Daytona is the first race of the TUDOR United SportsCar Championship season, and the victory avenged a disappointing loss at last year’s Rolex 24 when Ganassi Racing debuted the Ford EcoBoost twin-turbo V6 racing engine for the Daytona Prototype — but both cars failed to finish.

This year the two Ganassi Ford EcoBoost Rileys qualified second and third and ran at the front of the field for more than 22 hours, until the No. 01 team car encountered clutch problems that forced it from the race. The No. 02 victory earned the first Rolex 24 win for the Ford EcoBoost V6, pairing nicely with last year’s victory at the 12 Hours of Sebring. 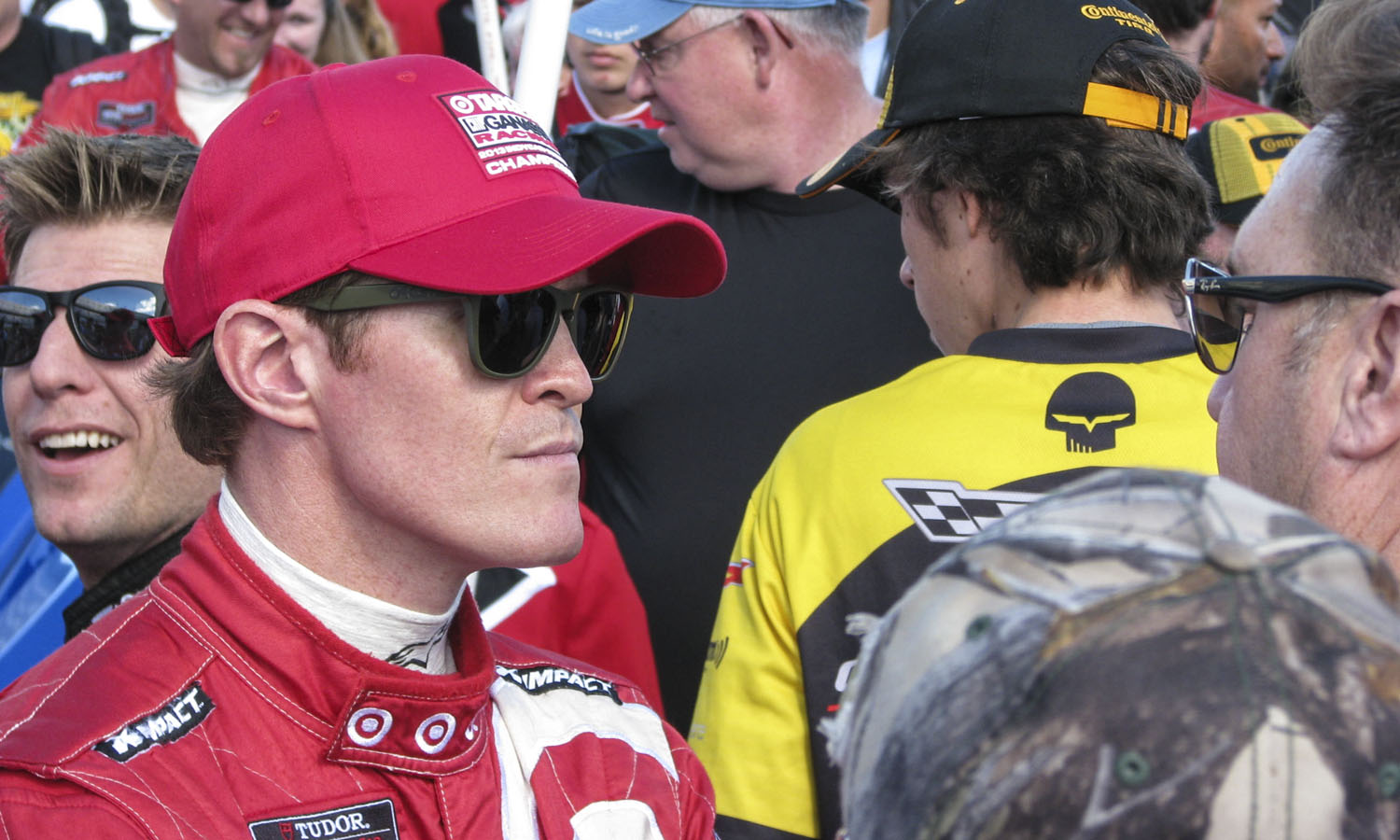 The win was the second overall Rolex 24 win for Dixon, who shared driving duties in the No. 2 car with his IndyCar teammate Tony Kanaan and Ganassi NASCAR Sprint Cup drivers Jamie McMurray and Kyle Larson.

Scott Dixon is the 2008 Indy 500 winner and 3-time Verizon IndyCar Series champion, while Kanaan claimed the 2013 Indy 500 win and 2004 Verizon IndyCar Series championship. From the NASCAR Sprint Cup team, Jamie McMurray is the 2010 Daytona 500 winner and the 2010 Brickyard 400 winner. At only 22 years old, Kyle Larson is the 2013 NASCAR Nationwide Series rookie of the year and the 2014 NASCAR Sprint Cup rookie of the year.

This all-star team complemented the driver lineup of the No. 1 car, piloted by TUDOR United SportsCar regular drivers Scott Pruett and Joey Hand, who teamed with IndyCar drivers Charlie Kimball and Sage Karam. 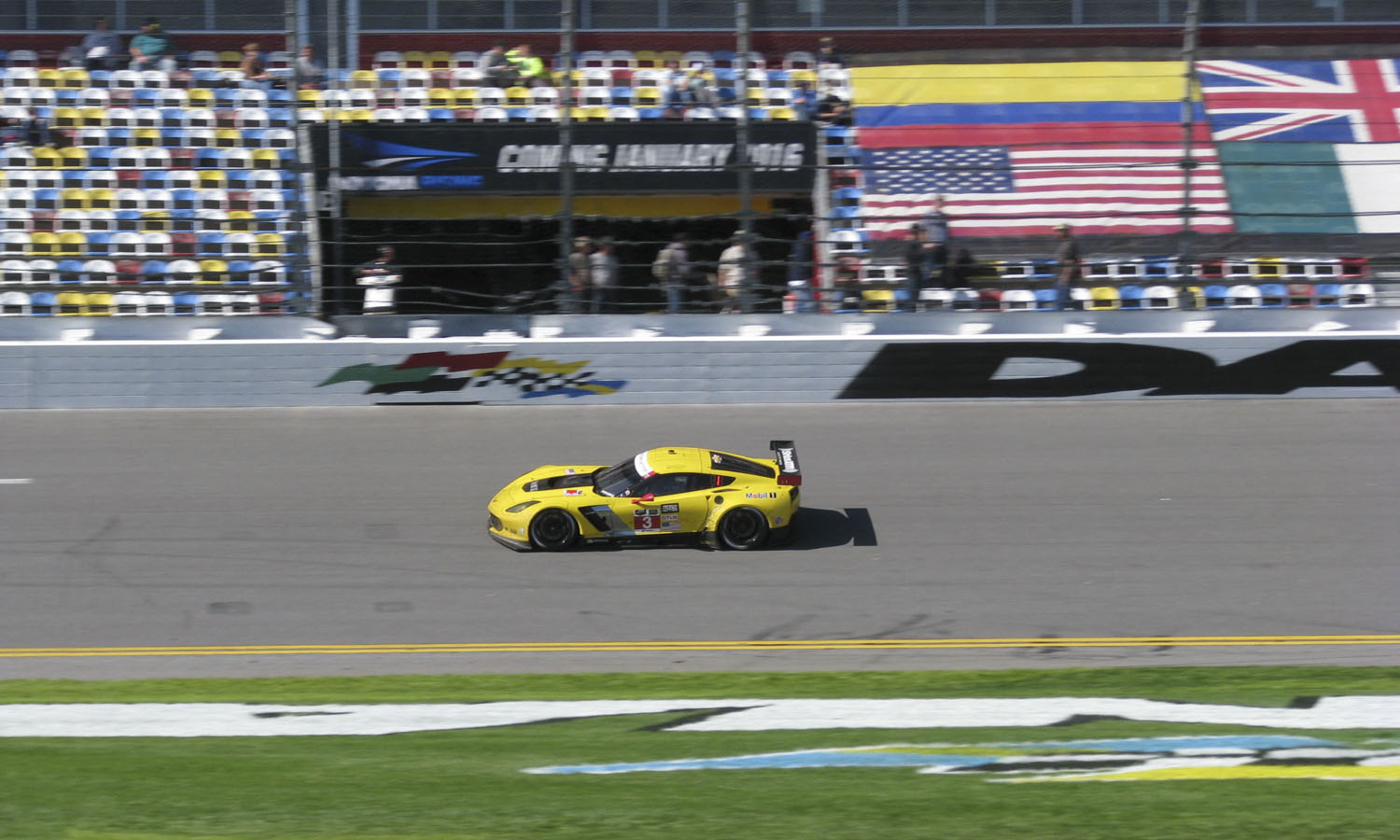 The No. 3 Corvette Racing Chevrolet Corvette C7.R won the GTLM class by less than half a second.

The competition in the GT Le Mans class was equally intense with the No. 3 Corvette Racing Chevrolet Corvette C7.R edging out the No. 25 BMW Team RLL BMW Z4 GTE by only 0.478 seconds after 24 hours of racing. The GTLM cars are based on production street cars and are the fastest GT cars on the track with higher levels of power and aerodynamics than the GT Daytona class.

Over the final hours of the race, the GTLM battle came down to the No. 3 Corvette C7.R and the No. 25 Z4 GTE, which swapped the lead until the final shootout in the last 10 minutes of the race. The No. 4 Corvette Racing Chevrolet Corvette C7.R earned pole position for the start and early on in the race class leaders included the Risi Competizione Ferrari F458 Italia and the No. 911 Porsche North America Porsche 911 RSR, with the No. 17 Team Falken Tire challenging as well. 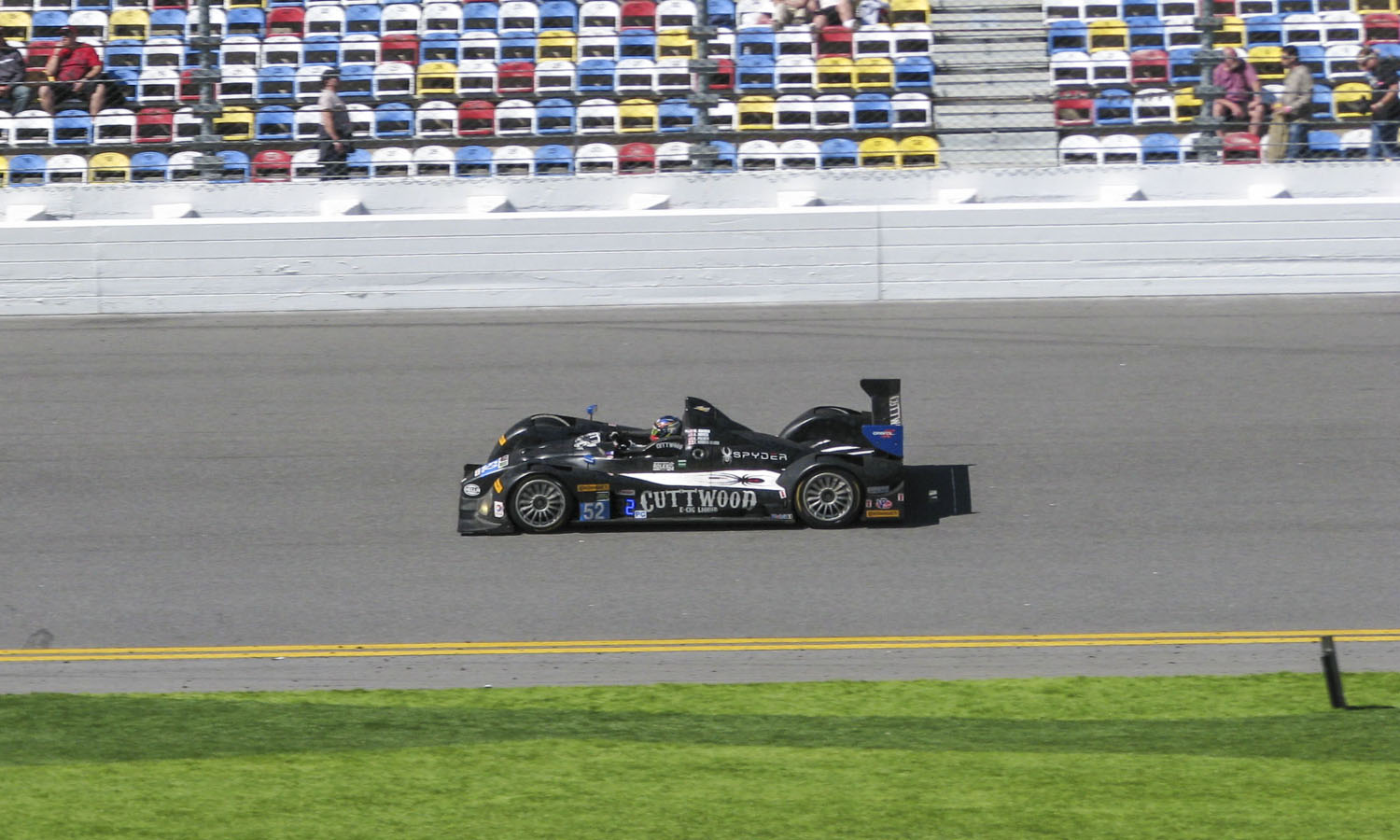 The No.52 PR1/Mathiasen Motorsports ORECA FLM09 took the PC class lead with only 20 minutes left in the race.

The dramatic finish for the Prototype Challenge class played out with 20 minutes left in the race as Colin Braun in the CORE Autosport ORECA FLM09 held a comfortable one-lap lead over Tom Kimber-Smith in the No.52 PR1/Mathiasen Motorsports ORECA FLM09. After contact with another car, Braun went off in the International Horseshoe and Kimber-Smith was able to take the lead.
Braun was able to get back on track, but his car’s rear suspension broke exiting the bus stop chicane, sending him into the wall. The car caught fire, but Braun escaped uninjured. The PC class drama ended with 20 minutes remaining as Kimber-Smith cruised home to a one-lap victory over the No. 16 BAR1 Motorsports ORECA FLM09. 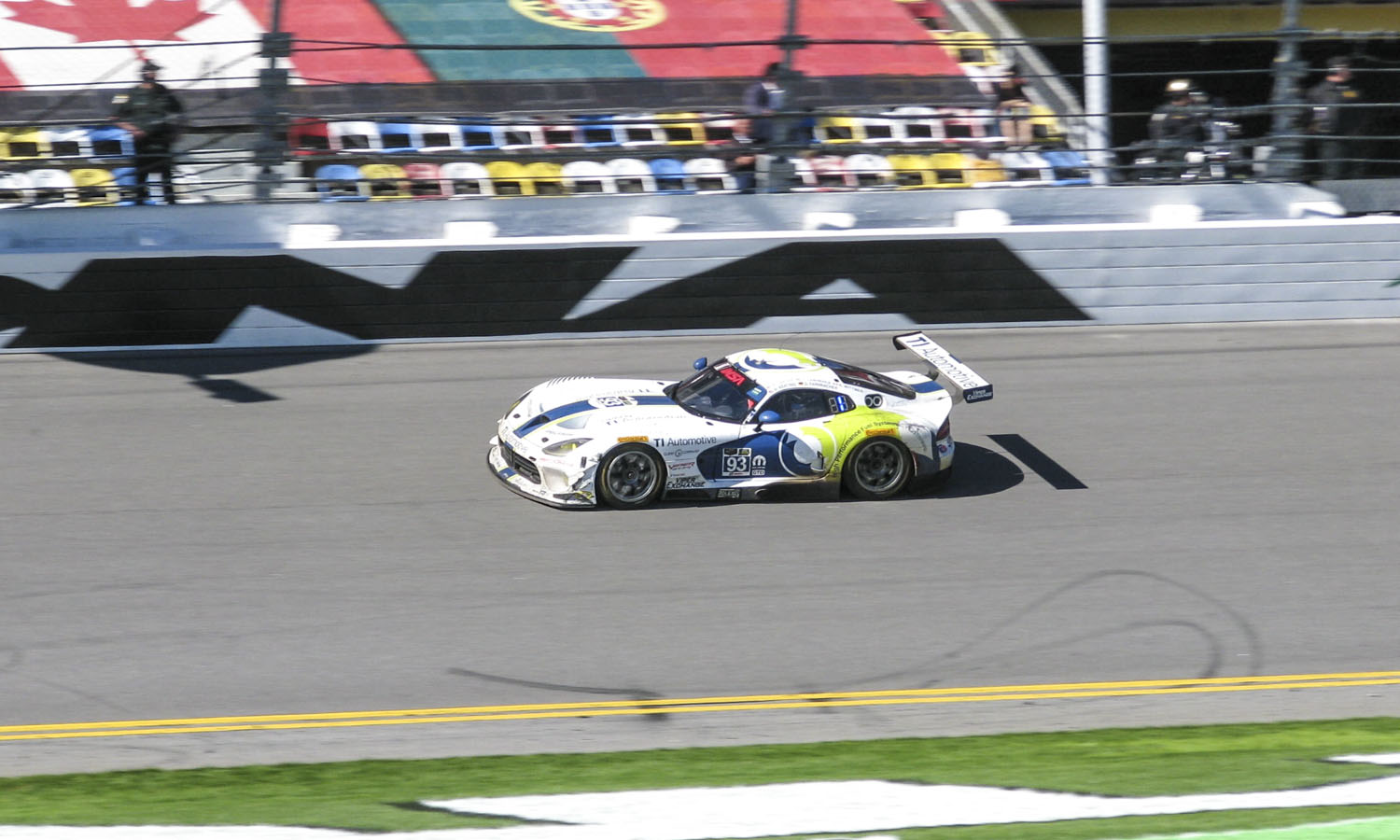 The No. 93 Riley Motorsports Dodge Viper SRT took the win in the GTD class.

In the GT Daytona class, also for production-based GT cars but with less power and aerodynamics than the GTLM cars, the No. 93 Riley Motorsports Dodge Viper SRT edged out the No. 22 Alex Job Racing WeatherTech Porsche 911 GT America by 7.588 seconds to take the class win.

One of only two Vipers entered in the GTD class, which is dominated by Porsche 911 GT America entries, the Viper was a surprise winner after starting last on the grid because of an incident during qualifying. The class also included Aston Martin V12 Vantage, Audi R8 LMS, BMW Z4 and Ferrari 458 Italia entries, making it the largest class in the Rolex 24.