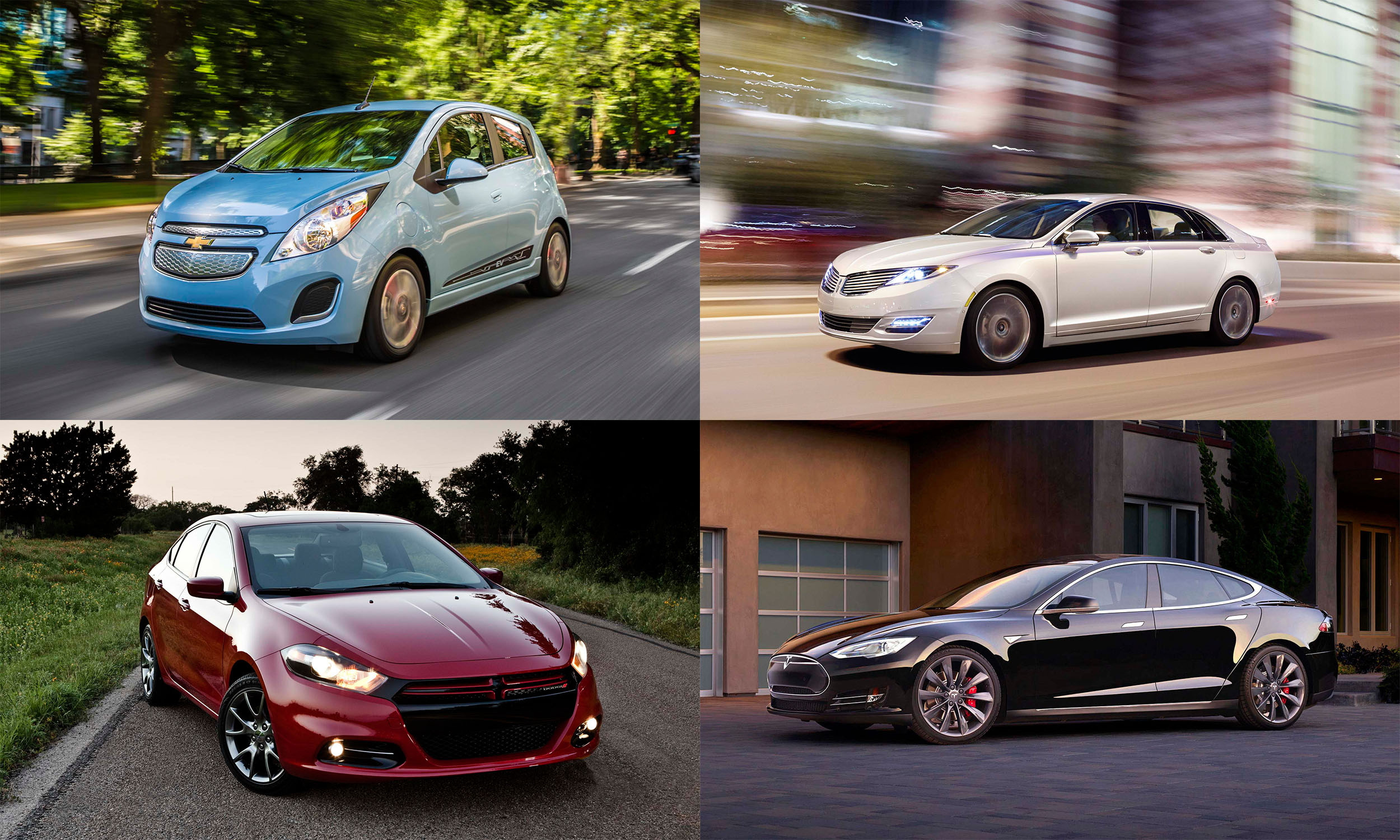 Yankee Efficiency
Until a few years ago, a common line of thought among American consumers went something like this: In order to get a quality, fuel-efficient new car, your choices were limited to the offerings from Japan or diesels from Europe. Fortunately the market has changed — some of the most miserly cars on the road now come from American car companies and brands. There’s also a wide variety of choices, with vehicles powered by electric, diesel, hybrid and efficient gasoline engines. Here’s a look at 16 of the most fuel-efficient American vehicles, all of which claim to achieve better than 30 mpg. (Mileage ratings are combined city/highway fuel economy as reported by the U.S. EPA.) 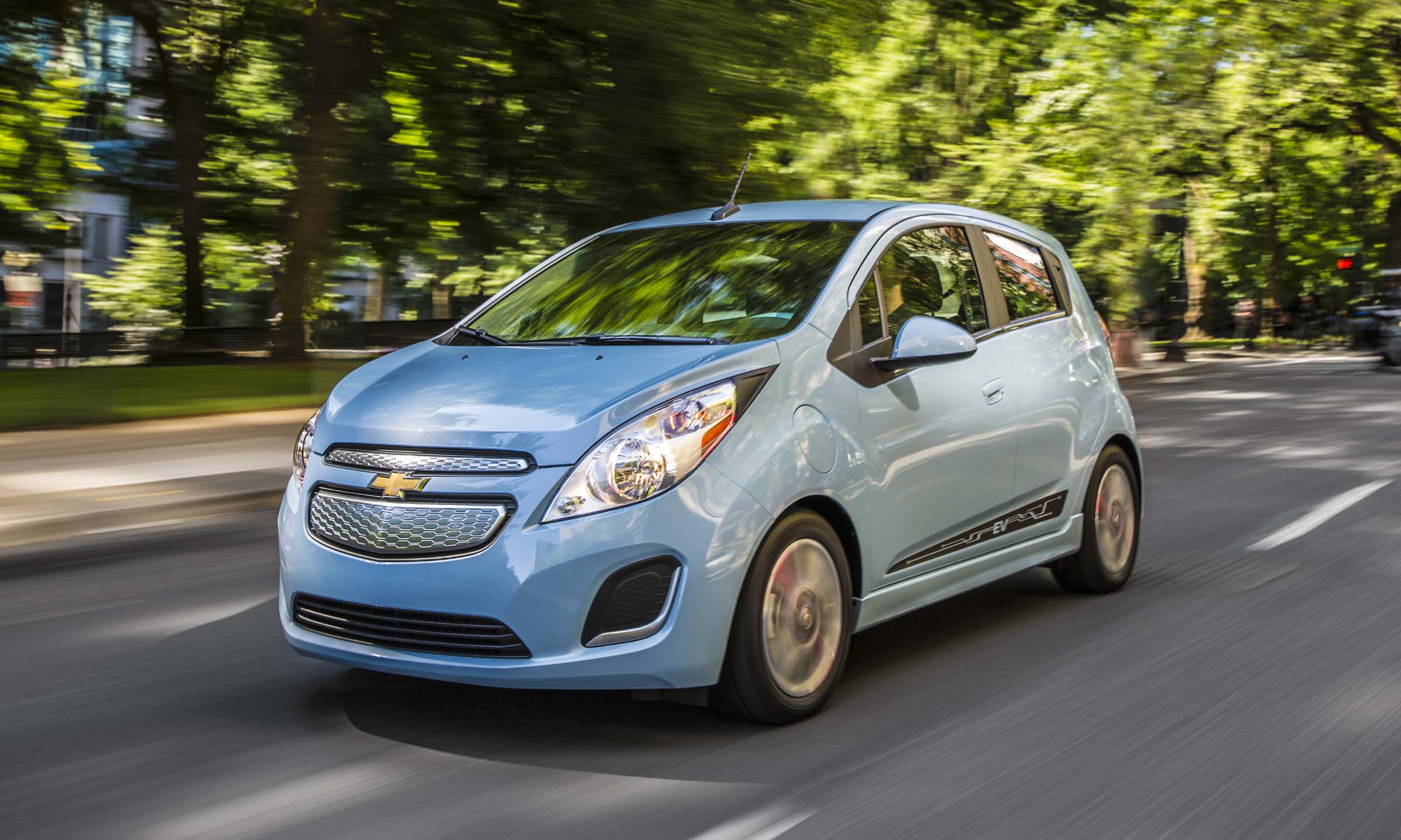 2015 Chevrolet Spark EV
119 MPGe
Price: Starting at $26,820
Only the BMW i3 EV bests the Spark EV in terms of fuel economy for cars sold in America — pretty good company to keep for the small electric-powered Chevrolet. With 140 horsepower and 327 lb-ft of torque, the Spark EV zips to 60 mph in just over 7 seconds. Range is rated at 81 miles, and with a fast-charge system the lithium-ion battery back can be charged from nothing to 80 percent in just 20 minutes. Unfortunately, Spark EV availability is currently limited to California and Oregon. 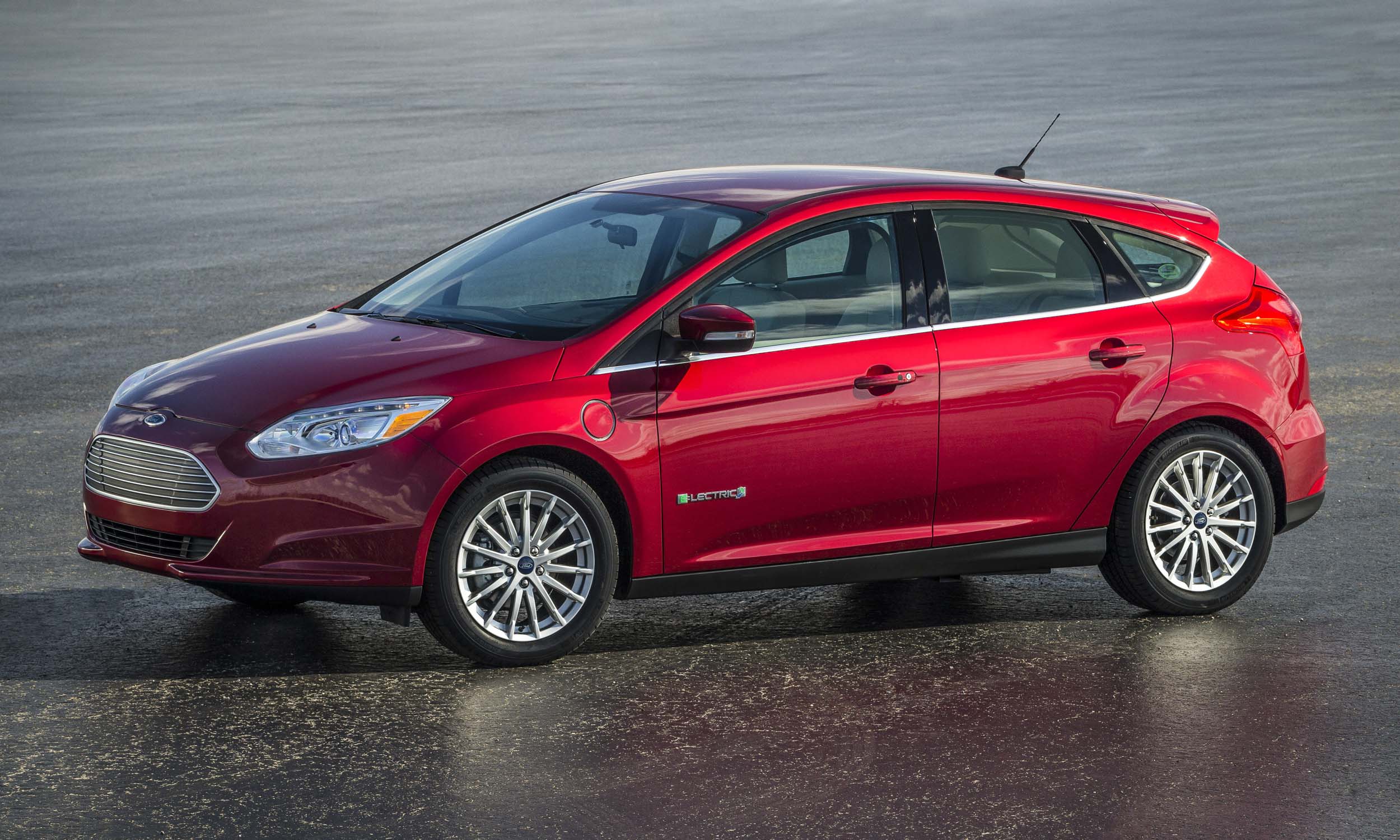 2015 Ford Focus Electric
105 MPGe
Price: Starting at $29,170
To be certain that buyers don’t think an electric car needs to be a bare-bones economy model, Ford loads up the Focus Electric with an impressive array of standard features. All Focus Electrics come with a rearview camera, SYNC hands-free connectivity, 17-inch alloy wheels, a 9-speaker audio system and voice-activated navigation. Focus Electric has a range of 76 miles and can be completely recharged in about 3.5 hours with a 240-volt charging station. 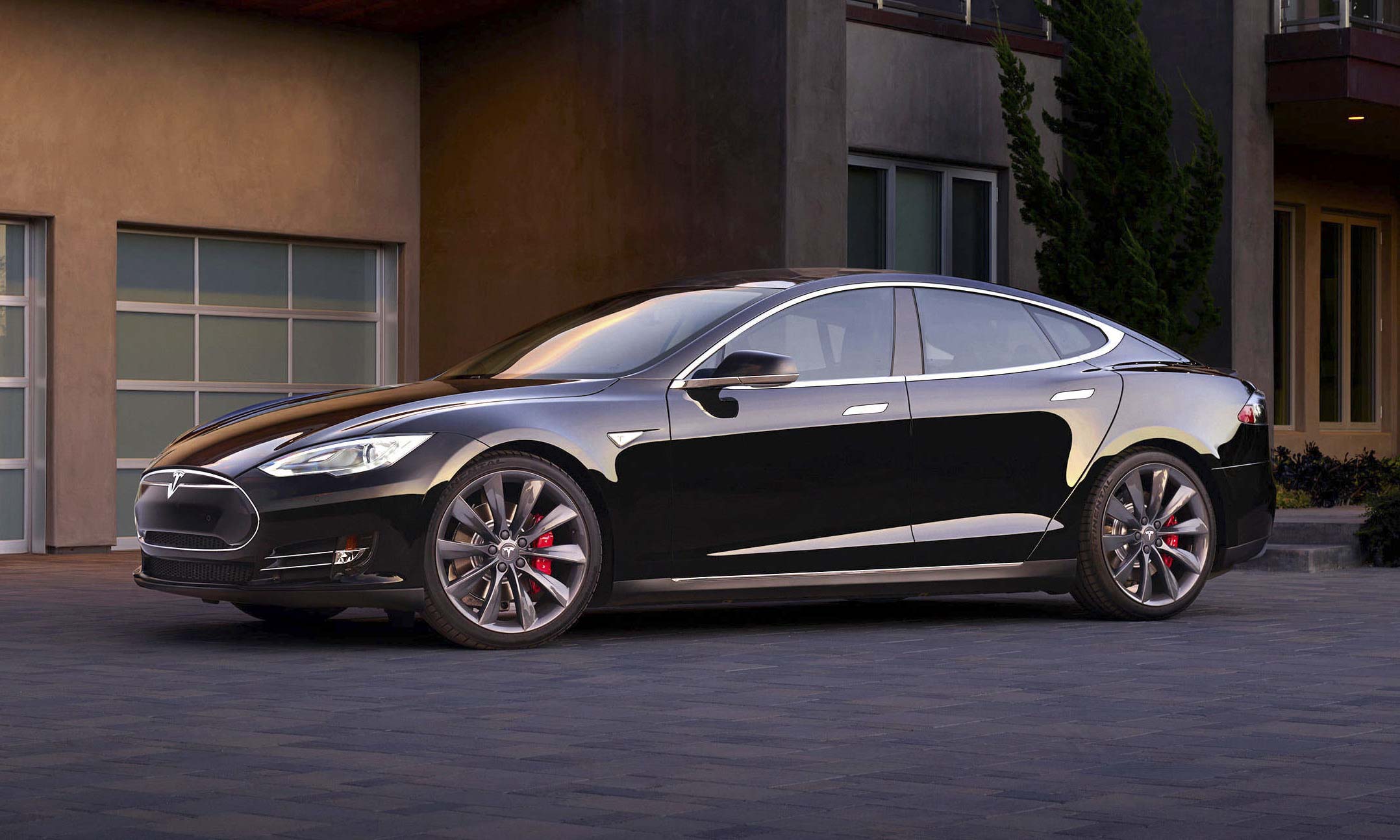 2015 Tesla Model S 85D AWD
100 MPGe
Price: Starting at $104,500
It may be pricey, but the Tesla Model S boasts considerably better performance and range than any other electric car on the market. The 85D has two motors — one for each axle — which makes it very quick. The 85D can reach 60 mph in just over 5 seconds. Tesla claims a range of 270 miles for this big luxury sedan, and with the proper fast-charger setup it can be fully recharged from empty in about 4.5 hours. 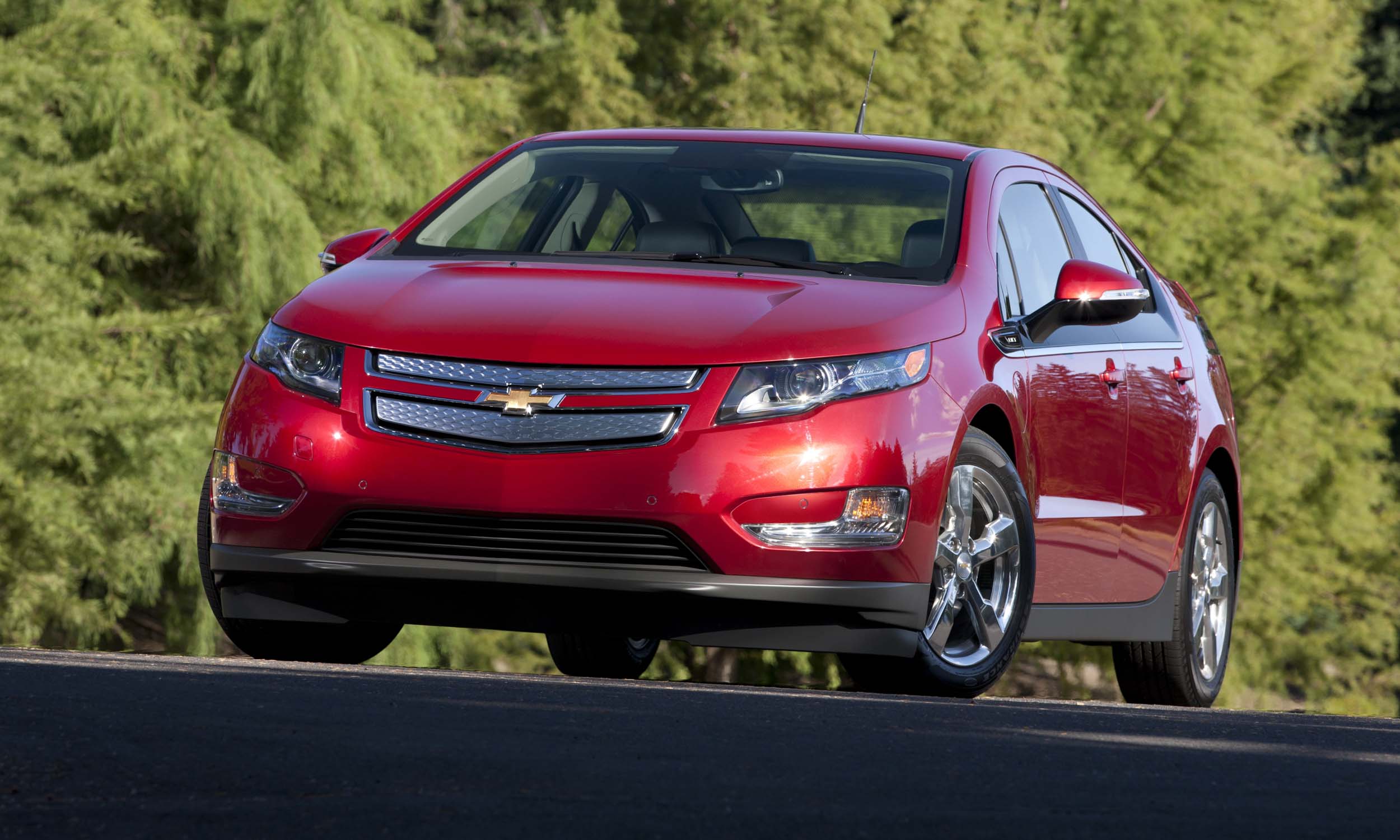 2015 Chevrolet Volt
98 MPGe
Price: Starting at $34,345
The Chevrolet Volt employs an innovative drivetrain, which is basically an electric motor with an onboard gasoline-powered generator. Volt can travel 38 miles on a full charge, but unlike a pure electric car the driver has a choice — plug it in or just keep driving. When needed, the gasoline engine starts up and charges the batteries to power the electric motor. So if your commute is less than 38 miles and you can charge the Volt at work, you may never need to use the gasoline engine — but it’s nice to know you have a total range of 380 miles. One note —a new 2016 Volt will go on sale later this year with a 50-mile EV range, as well as other improvements. 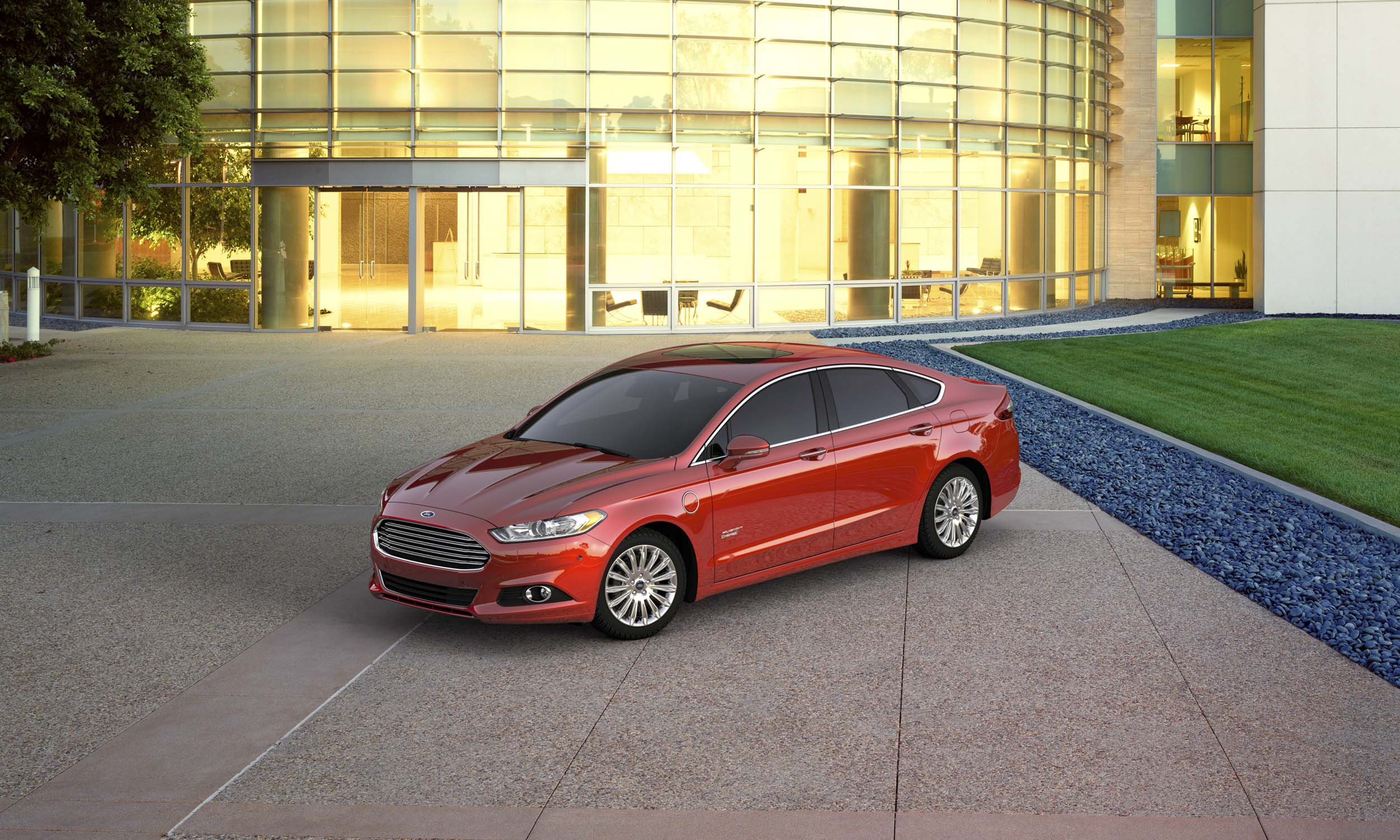 2016 Ford Fusion Energi
88 MPGe
Price: Starting at $33,900
The Ford Fusion Energi plug-in hybrid takes a different tack to improve fuel economy. The Energi functions as a standard gas-electric hybrid sedan; however, it can be plugged into a 120-volt outlet or a 240-volt charging station, and with a full charge can travel almost 20 miles in electric-only mode. Twenty miles doesn’t seem like much; but, depending on your daily commute, it can represent considerable gas savings. With total output of 195 combined horsepower on tap, the Fusion Energi offers a great mix of performance and fuel savings. 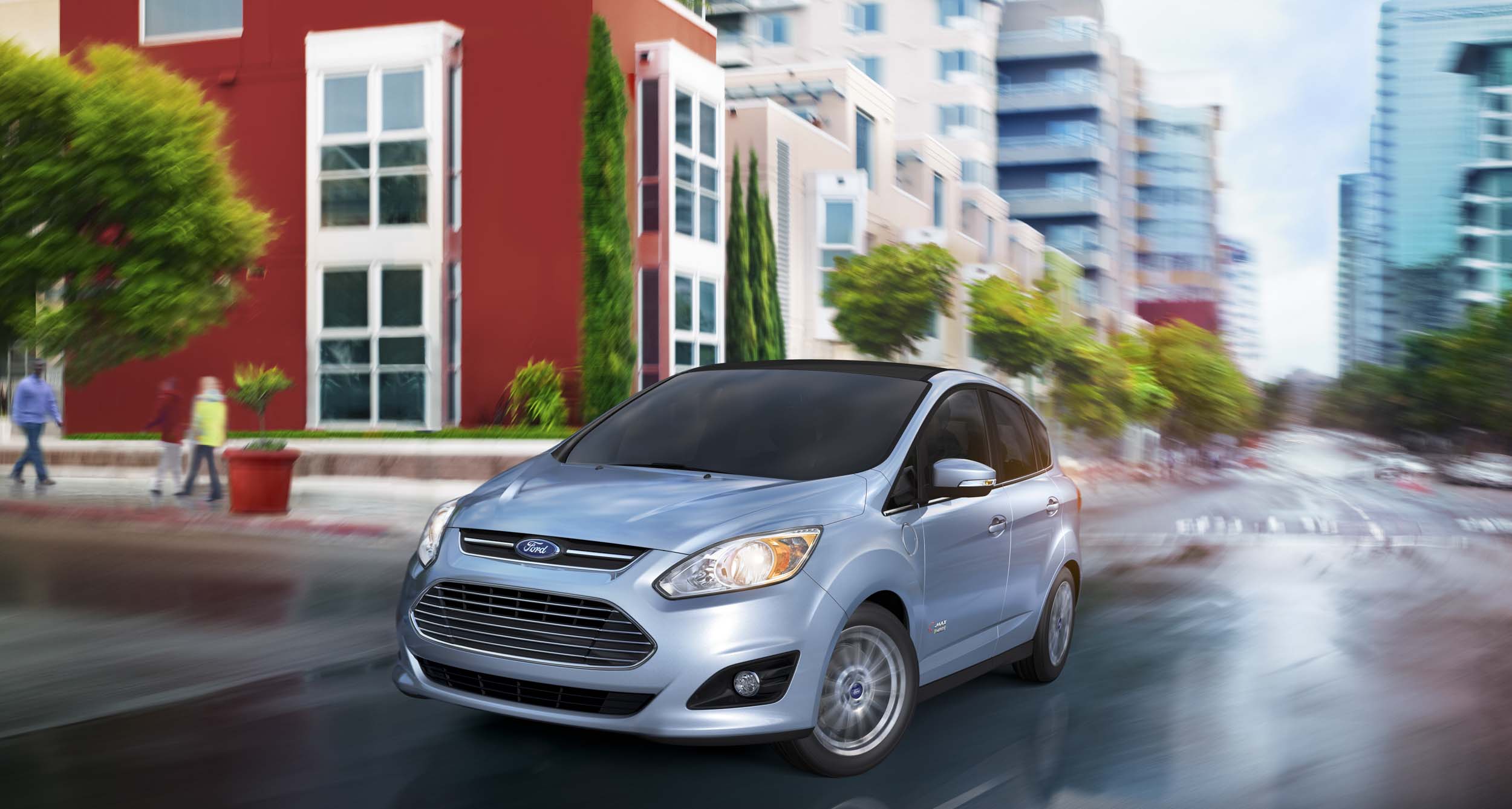 2015 Ford C-MAX Energi
88 MPGe
Price: Starting at $31,770
The C-MAX isn’t quite a minivan, it isn’t quite a crossover, and it isn’t a sedan. It may be hard to classify, but with its high-roof design and fold-flat second-row seating, it offers a nice mix of passenger and cargo space. The C-MAX Energi has the ability to travel 19 miles in electric-only mode and can achieve a bladder-bursting 550 mile overall range. Like the Fusion Energi, the C-MAX’s gas engine and electric motor combine for 195 horsepower, giving it plenty of oomph for most situations. 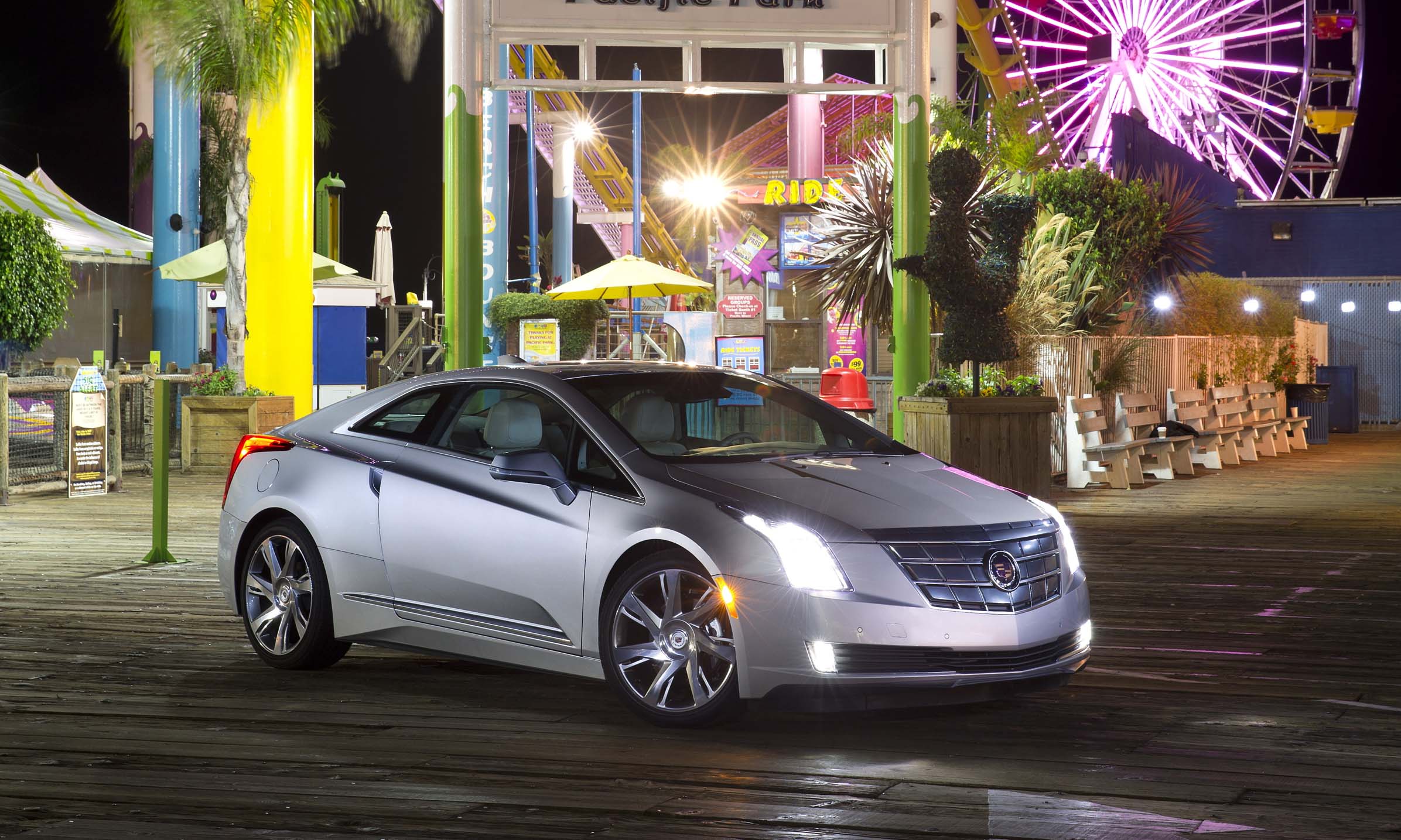 2014 Cadillac ELR
82 MPGe
Price: Starting at $75,000
The ELR is basically the Cadillac version of Chevrolet’s Volt, featuring the same innovative powertrain. But this is a Cadillac and it clearly looks the part with LED headlights, 20-inch wheels and styling cues that fit with the rest of the luxury brand’s lineup. Inside it’s the same story, with leather, wood and carbon fiber trim throughout, as well as a Bose 10-channel audio system. Four different modes are selectable by the driver, providing different levels of performance vs. efficiency. 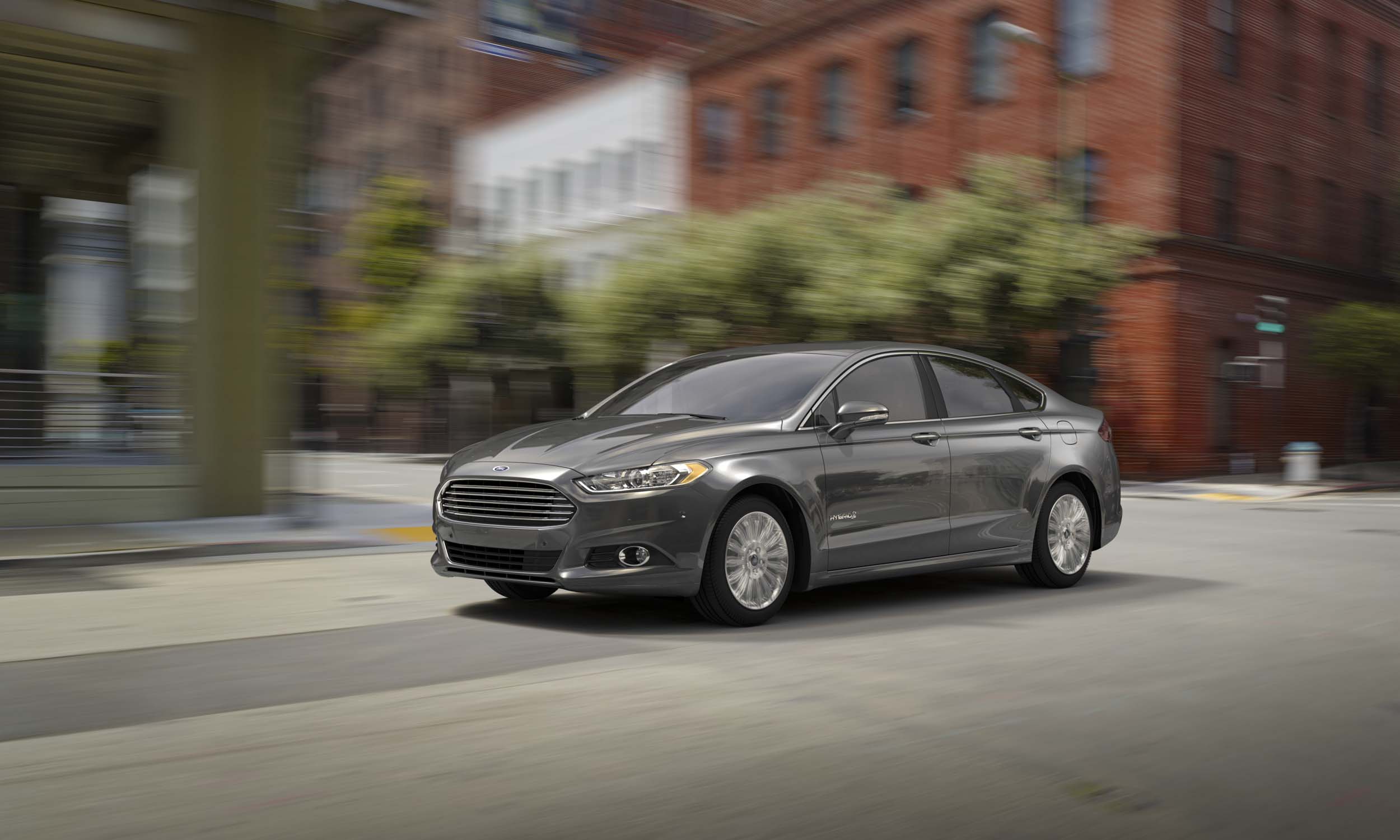 2016 Ford Fusion Hybrid
42 mpg
Price: Starting at $25,675
Ford’s Fusion Hybrid holds the title as the most fuel-efficient American car that doesn’t get plugged in. With its 2.0-liter Atkinson-cycle 4-cylinder engine combined with a powerful electric motor, the Fusion Hybrid has 188 horsepower — about 13 more horses than the non-hybrid Fusion. Three different trim levels of the Fusion Hybrid are available, ranging from the S to the Titanium. In addition to its impressive fuel mileage, the Fusion Hybrid is available with the latest driver-assist features such as Lane Keeping, Adaptive Cruise Control, Active Park Assist and Blind Spot Information System. 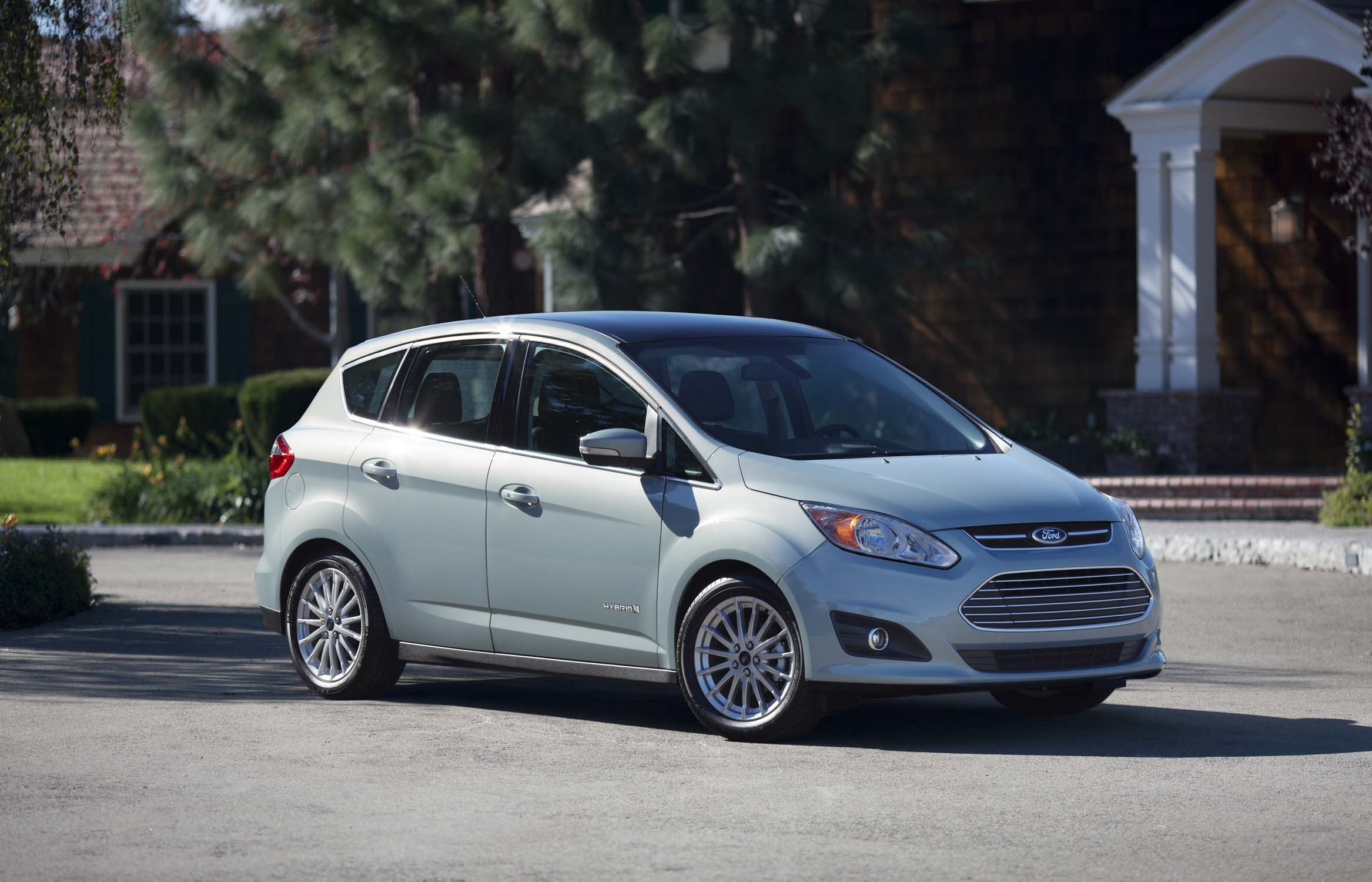 2015 Ford C-MAX Hybrid
40 mpg
Price: Starting at $24,170
Unlike the Fusion, Ford’s C-MAX is only available with hybrid powertrains. While it carries the same 188-horsepower gas-electric hybrid system, fuel economy is slightly lower due to being a bit heavier and taller. Often the driver affects fuel economy more than any other variable, so Ford has added technology to help drivers be more efficient. A SmartGauge with EcoGuide shows drivers how their actions affect fuel efficiency. Additionally, the Brake Coach feature helps drivers brake properly to fully optimize the regenerative braking system. Efficient braking is rewarded with green leaves accumulating in the driver’s display. 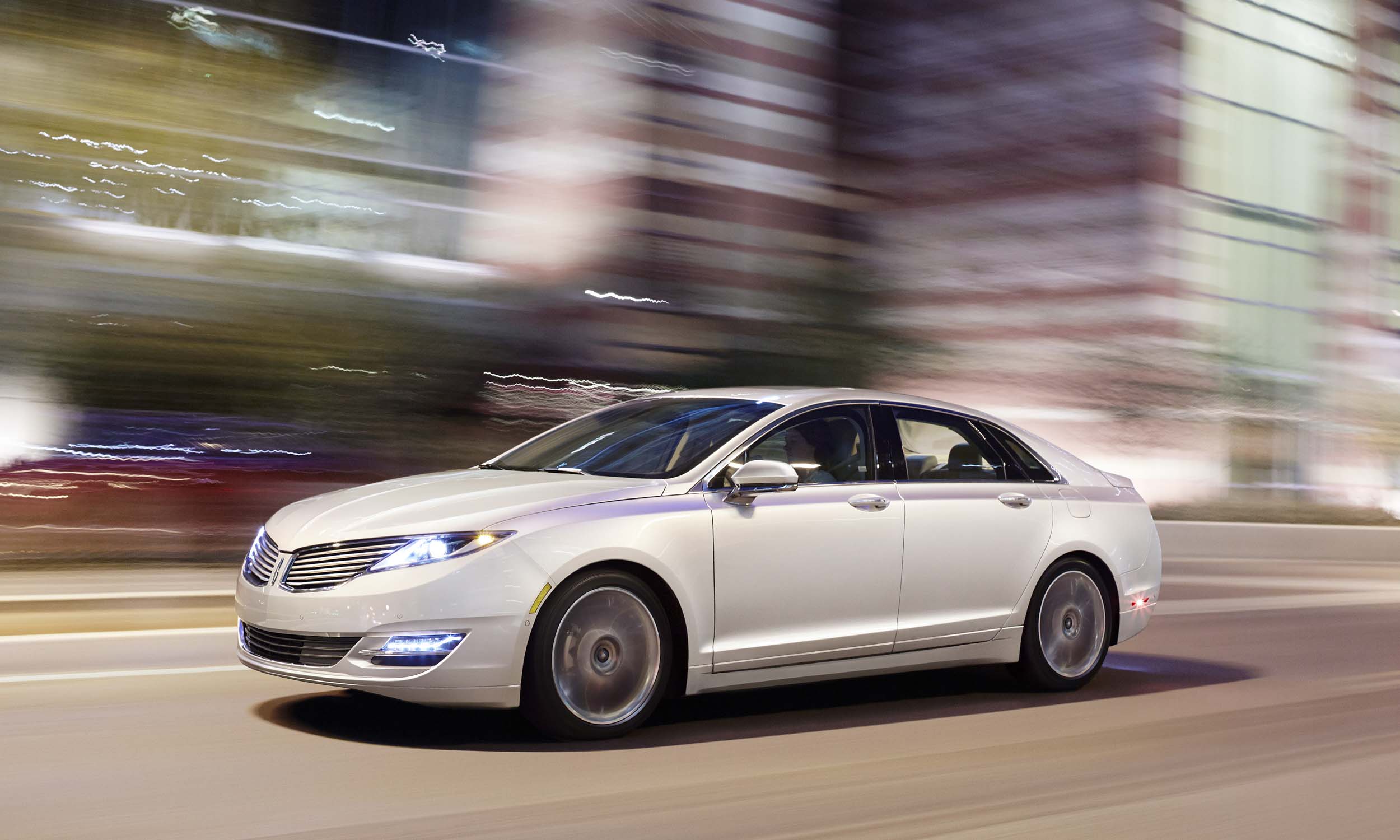 2015 Lincoln MKZ Hybrid
40 mpg
Price: Starting at $35,190
It seems like Lincoln really wants shoppers to choose the MKZ Hybrid vs. the standard MKZ — the company has priced the two identically, so there’s no price penalty to go with the hybrid version. With the same 188-horsepower powertrain found in the Ford Fusion Hybrid, the MKZ is one of the most fuel-efficient luxury cars on the market. One neat trick — the MKZ Hybrid can cruise as fast as 85 mph on electric power only. As expected from the luxury brand, the MKZ Hybrid is available with numerous amenities, including SYNC with MyLincoln Touch featuring an 8-inch touchscreen, heated front seats, class-exclusive LED headlamps and Lincoln Drive Control. 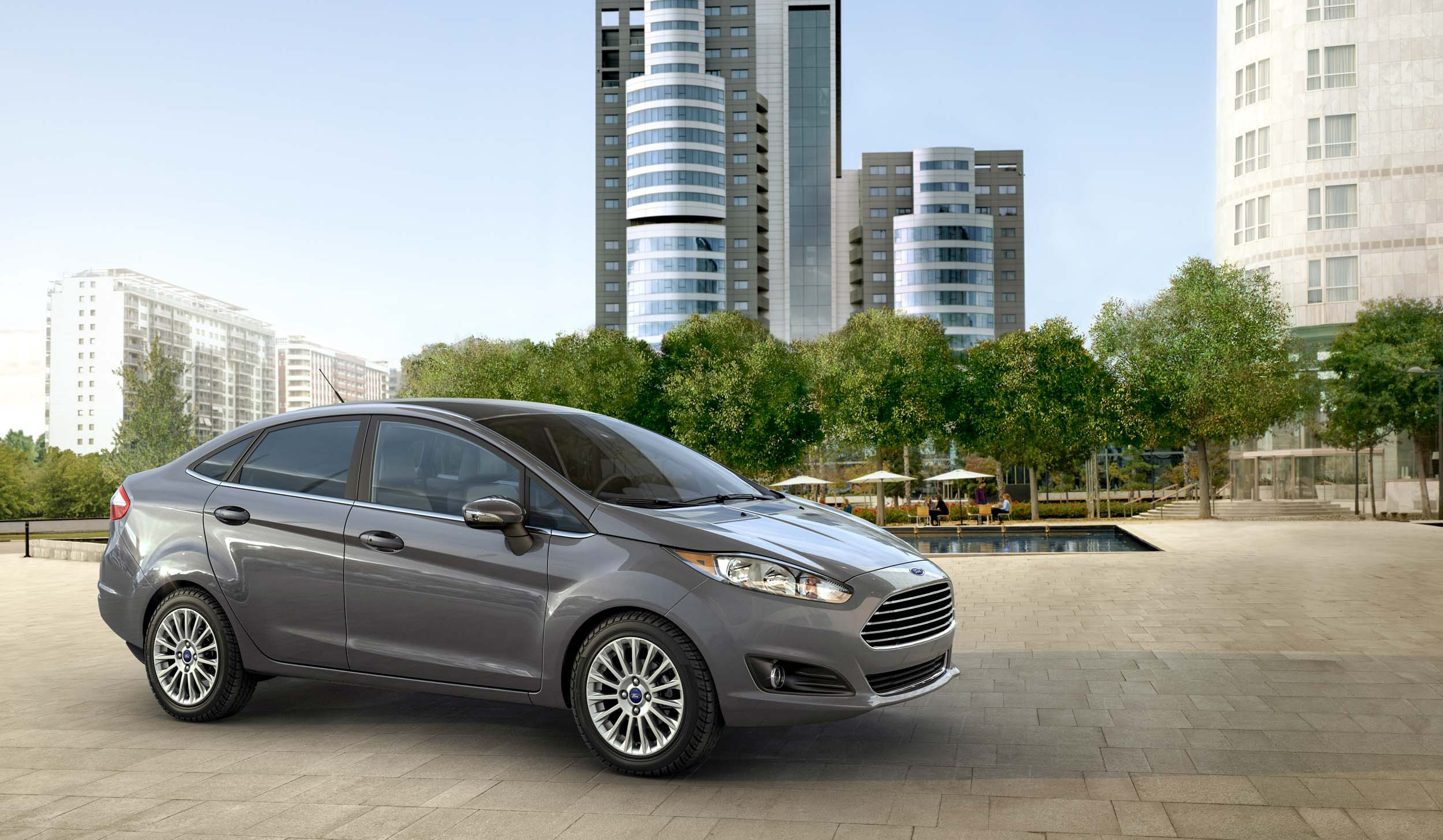 Ford Fiesta SFE
36 mpg
Price: Starting at $16,590
Not only is the Fiesta the smallest car in the Ford lineup, it’s available with the smallest engine in a Ford. The tiny 1.0-liter EcoBoost puts out 123 horsepower and delivers as high as 43 mpg on the highway. Ford points out that the power per liter of displacement in the Fiesta is better than that of a Lamborghini Aventador — which is probably the only time these two vehicles will ever be mentioned in the same sentence. Although not very powerful, the Fiesta is small and agile, proving that high fuel economy doesn’t have to come at the cost of fun.

Ford Focus SFE
35 mpg
Price: Starting at $19,755
According to Ford, the Focus is one of the top-selling nameplates in the world, which has much to do with the vehicle offering a great combination of performance, agility and efficiency. Although all Focus models offer good fuel economy, the SFE with the innovative 1.0-liter EcoBoost engine is most impressive. Rated as high as 42 mpg on the highway, the Focus SFE can travel up to 434 miles between fill-ups. “The 1.0-liter EcoBoost engine is proof that excellent fuel economy and performance can come in one package,” said Raj Nair, Ford group vice president of global product development. 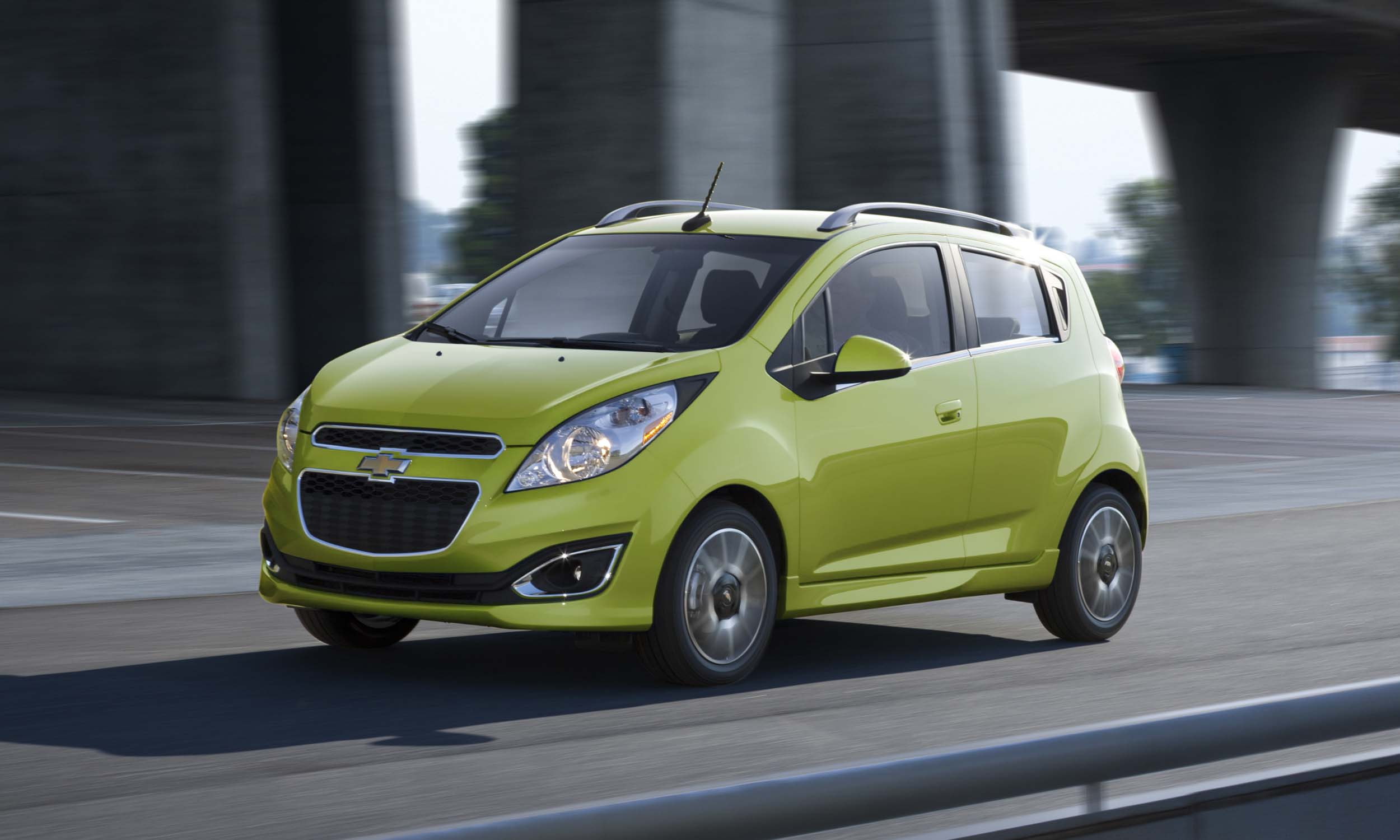 2015 Chevrolet Spark
34 mpg
Price: Starting at $12,270
General Motors has come a long way with regard to small, fuel-efficient cars. Earlier attempts in this market were less than successful, but the Spark is just the right mix of style and fun with great fuel economy to boot. In fact, Spark has helped Chevrolet grow its share of the small-, compact- and mini-car segments by more than 200 percent in the last five years. Spark is also safer than you’d expect for such a small car — it has 10 airbags and was an Insurance Institute for Highway Safety Top Safety Pick last year. Chevrolet’s most fuel-efficient non-plug-in offering, the Spark features a 1.2-liter 84-horsepower engine that can achieve 39 mpg on the highway. 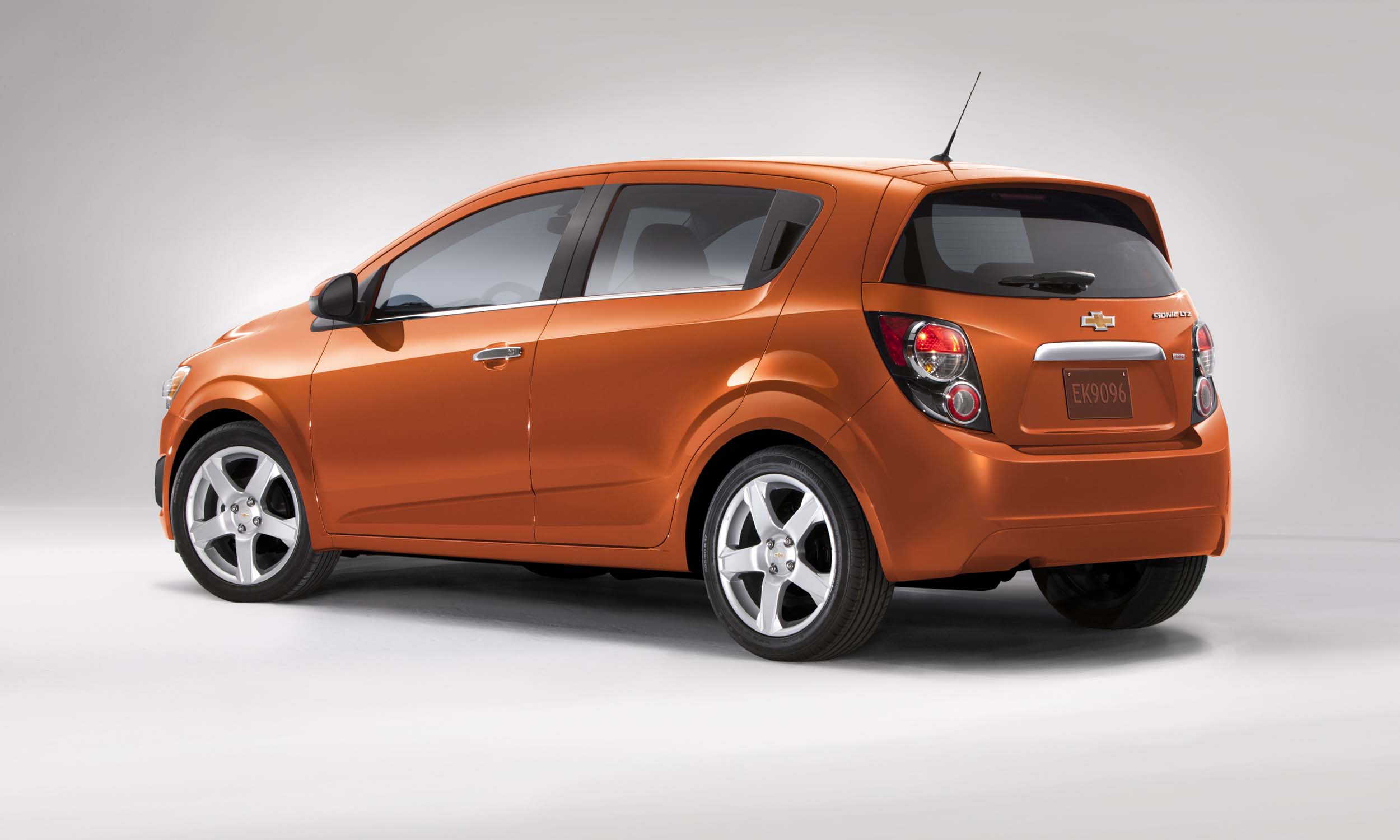 2015 Chevrolet Sonic
33 mpg
Price: Starting at $14,245
For a couple thousand dollars more than the Chevy Spark, buyers can get a bit more space and power in the Chevrolet Sonic. Another attractive small car offering from General Motors, the Sonic is available as a sedan or 5-door hatchback. Two engines are available; the most fuel efficient being a small 1.4-liter turbo that puts out 138 horsepower and 148 lb-ft of torque for zippy performance. There’s space for five inside, although one of the five will need to be diminutive. The best sign of success: GM says almost half of Sonic buyers trade in a non-GM vehicle. 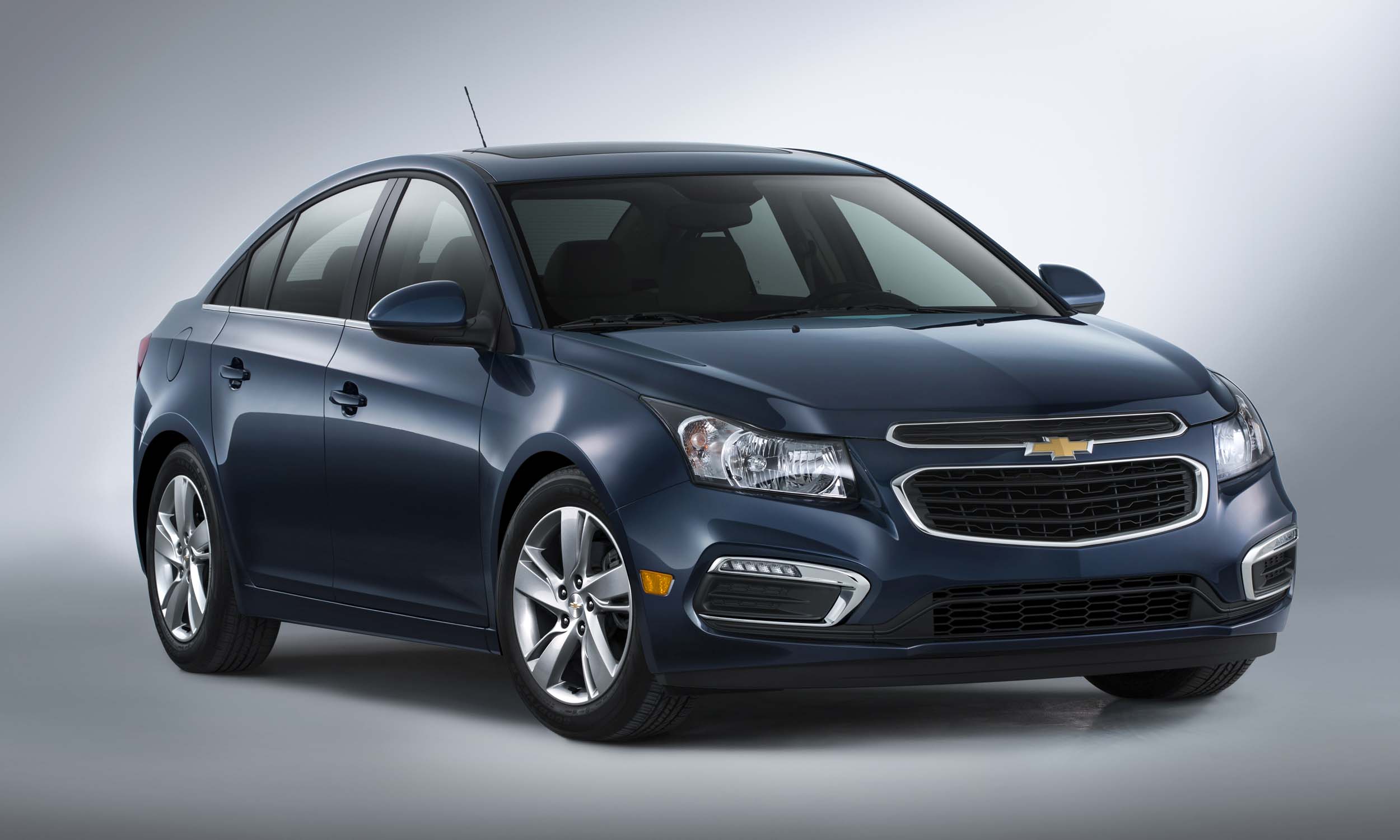 2015 Chevrolet Cruze Clean Turbo Diesel
33 mpg
Price: Starting at $25,660
European carmakers have offered diesel-powered automobiles in the U.S. for years, but it has been several decades since an American car company has marketed a competitive product. That is until the new Cruze Diesel debuted a few years ago. Running cleaner than some gasoline-powered engines, the Cruze Diesel features a 2.0-liter turbodiesel putting out 151 horsepower and — more importantly — 264 lb-ft of torque. The next step up in size from the Sonic, the Cruze can provide room for a small family while still returning up to 46 mpg on the highway. 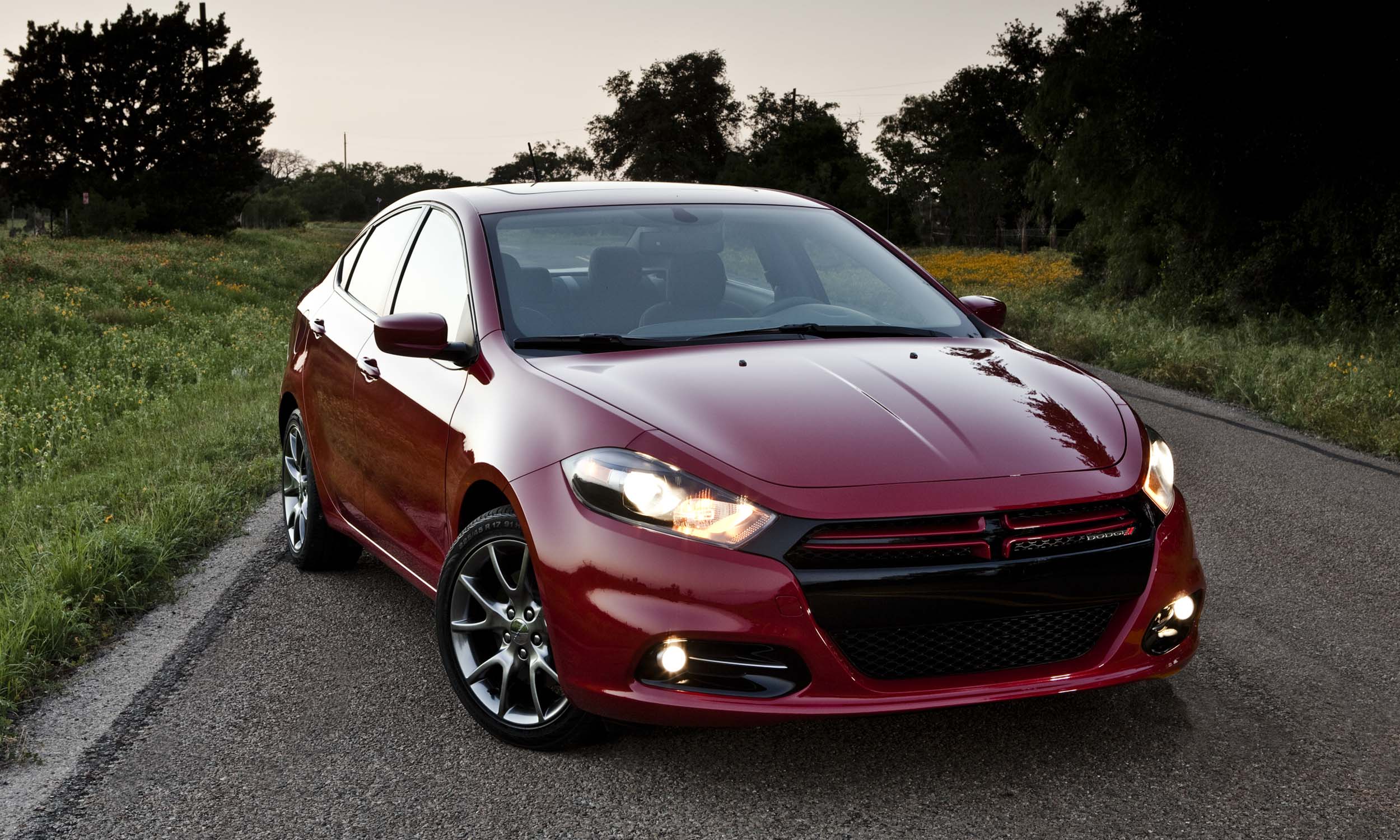 2015 Dodge Dart Aero
32 mpg
Price: Starting at $20,095
The Dart is Dodge’s small sedan and the Aero offers a nice mix of power and good fuel economy, made possible with an engine from Dodge’s Italian parent, Fiat. The Aero’s 1.4-liter MultiAir intercooled turbocharged engine delivers 160 horsepower and 184 lb-ft of torque. With the efficient powerplant combined with aerodynamic enhancements, lightweight chassis components and lower profile, the Dart Aero is able to achieve a claimed 41 mpg on the highway. With an impressive list of standard features, the Dart Aero is a value priced just below $20,000.