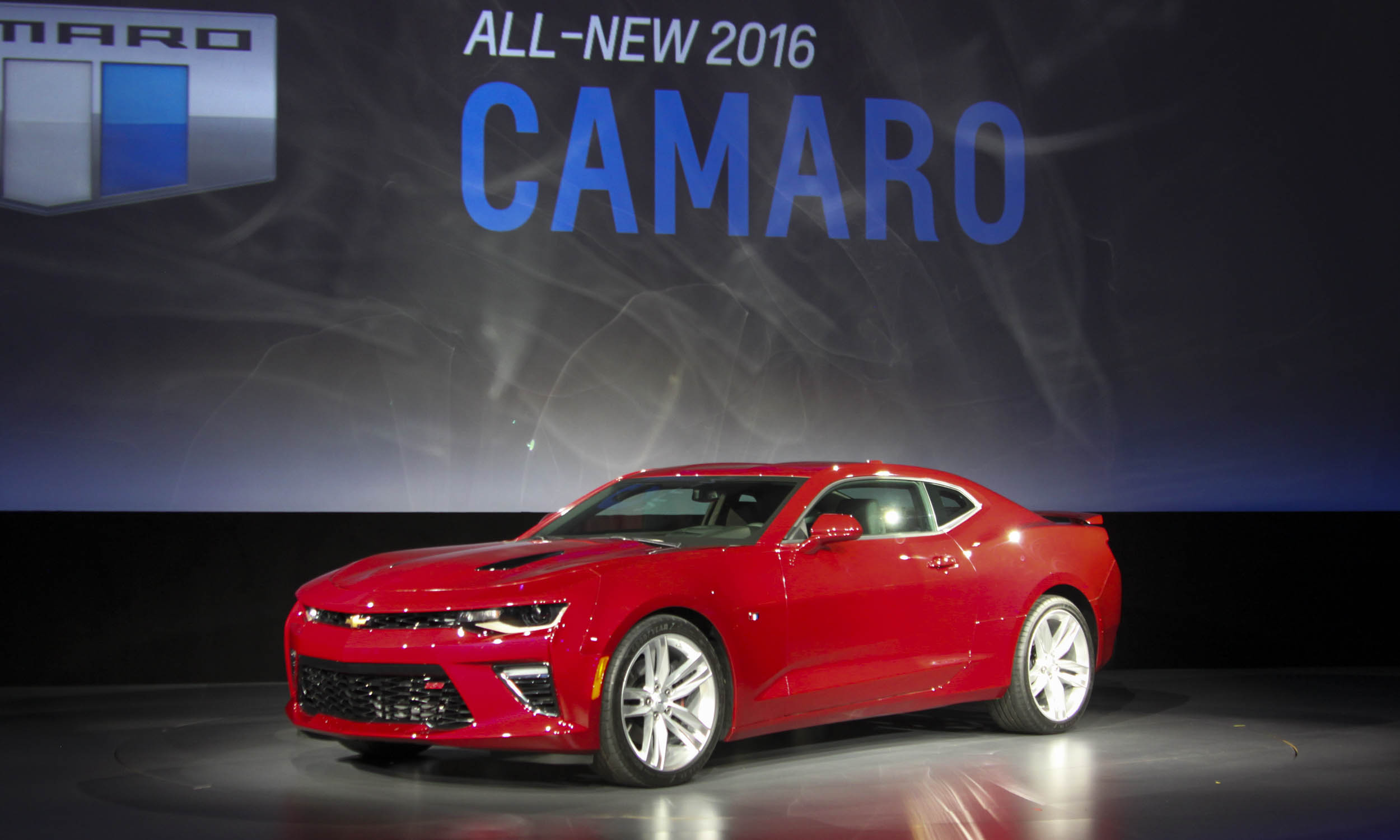 © Perry Stern, Automotive Content Experience
All-New
On only five other occasions has Chevrolet introduced an all-new Camaro. The first time was in 1966 when the company took the wraps off the original 1967 model. The last time was when the 2010 model arrived after an eight-year absence from the market. That is until today, when the completely redesigned 2016 Camaro rolled out for the first time at Belle Isle in Detroit. And complete redesign is not an exaggeration — the only carryover from the fifth generation is the bowtie emblem in the rear and the SS badge.
Video: Driving the 2016 Chevrolet Camaro engineering prototype at Belle Isle. 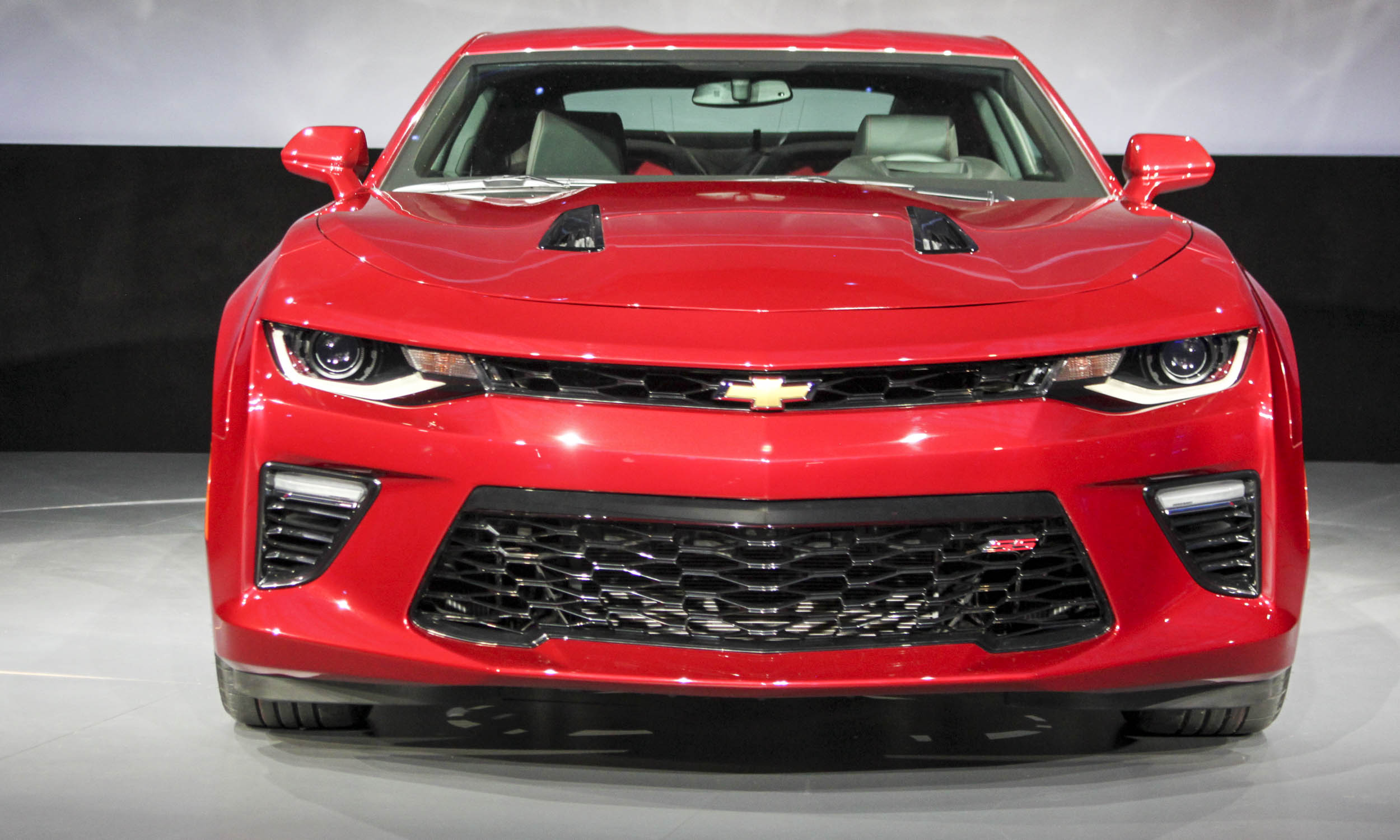 © Perry Stern, Automotive Content Experience
Subtle Changes — At First Glance
When the new model drove onstage at Belle Isle, our initial impression was that the new Camaro doesn’t look much different from the current generation, but on closer examination the changes are quite clear. Camaro still features bold rear fenders, but the lines have been smoothed to give the car a wider appearance. A sculpted hood that gives the impression of wrapping around the engine and deep lines in the door panels add depth. The grille and headlights are narrower and look a bit more menacing, providing a more aggressive stance. 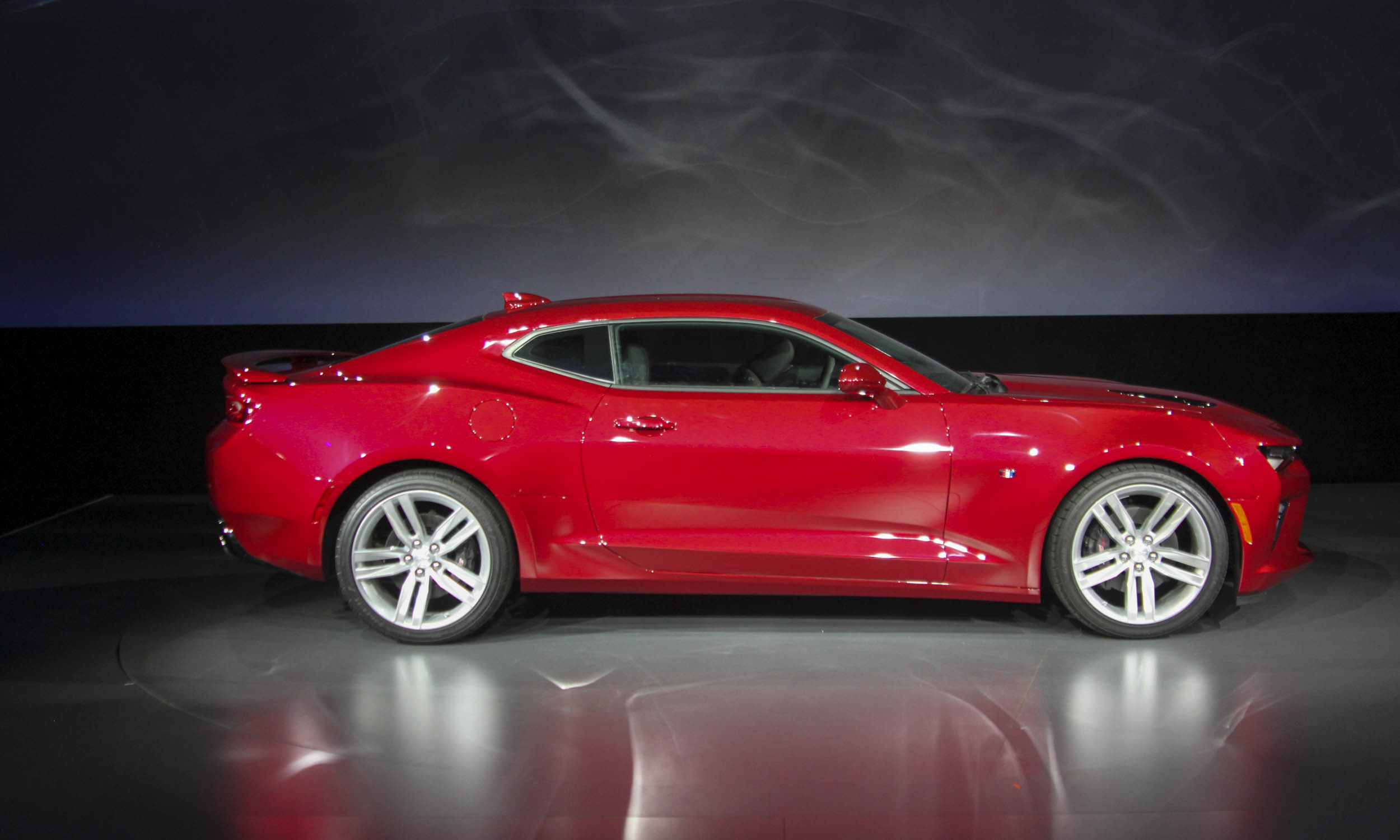 © Perry Stern, Automotive Content Experience
Aerodynamic Lines
Even though the lines of the new Camaro are immediately attractive, every shape and curve is driven not only by design but by aerodynamic requirements. “The importance of aerodynamics increases exponentially as we increase vehicle performance,” said Kirk Bennion, Camaro’s exterior design manager. “As engine output increases, we need more engine cooling. As acceleration and top speeds climb, we need to reduce lift for better high-speed stability.” However, Bennion noted that the team could not make any changes that would increase drag, thus impacting fuel economy. “To balance these different aerodynamic targets, we tested literally hundreds of changes on the new Camaro, millimeters at a time,” he said. 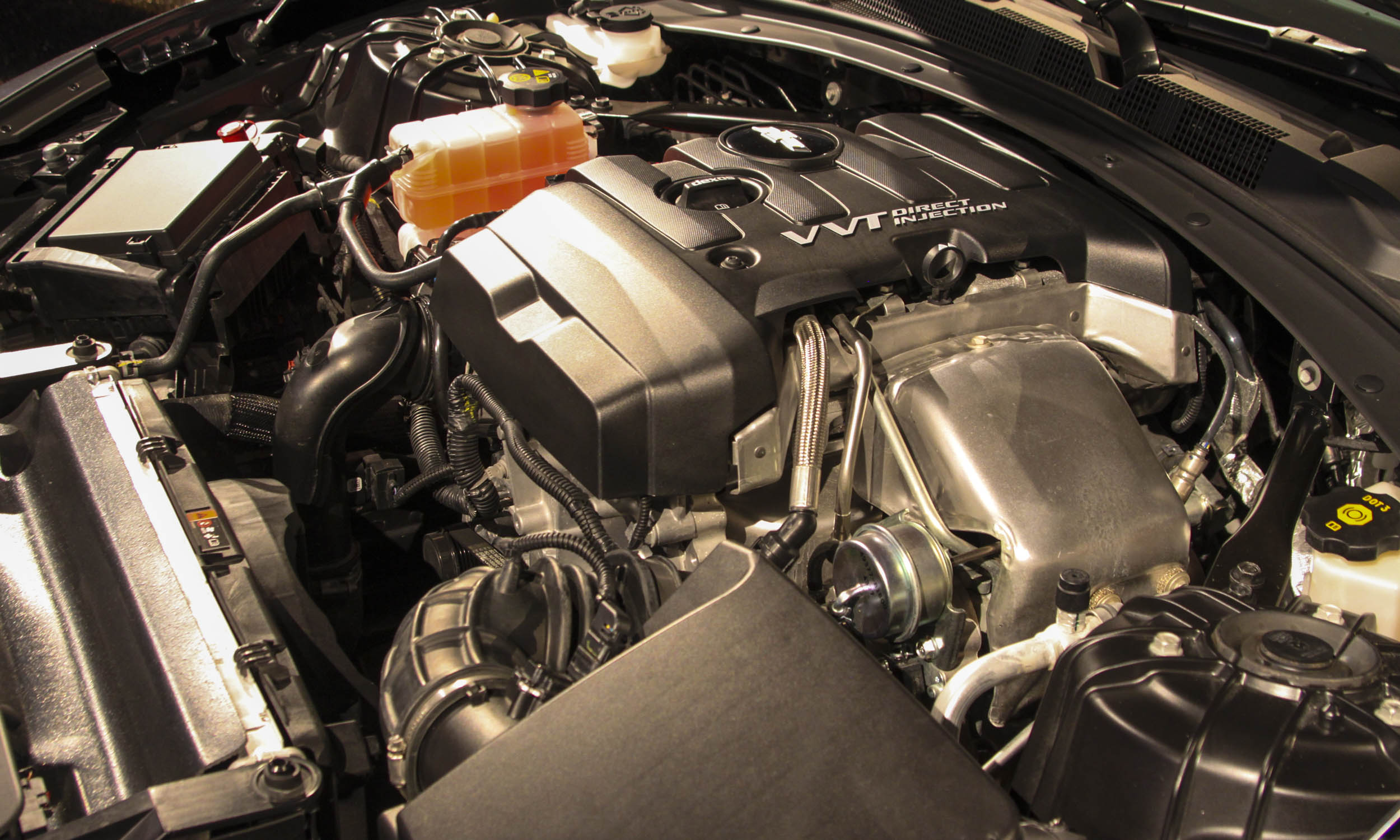 © Perry Stern, Automotive Content Experience
First Turbo Engine
With regard to performance, the new Camaro certainly brings much to the table. Three engines will be available when the 2016 model arrives in showrooms later this year, including the car’s first-ever turbocharged powerplant. The new Ecotec 2.0-liter turbo puts out 275 horsepower, pushing Camaro to 60 mph in less than 6 seconds while delivering better than 30 mpg. GM anticipates the turbo option will bring in a younger buyer used to driving other turbocharged sport coupes. 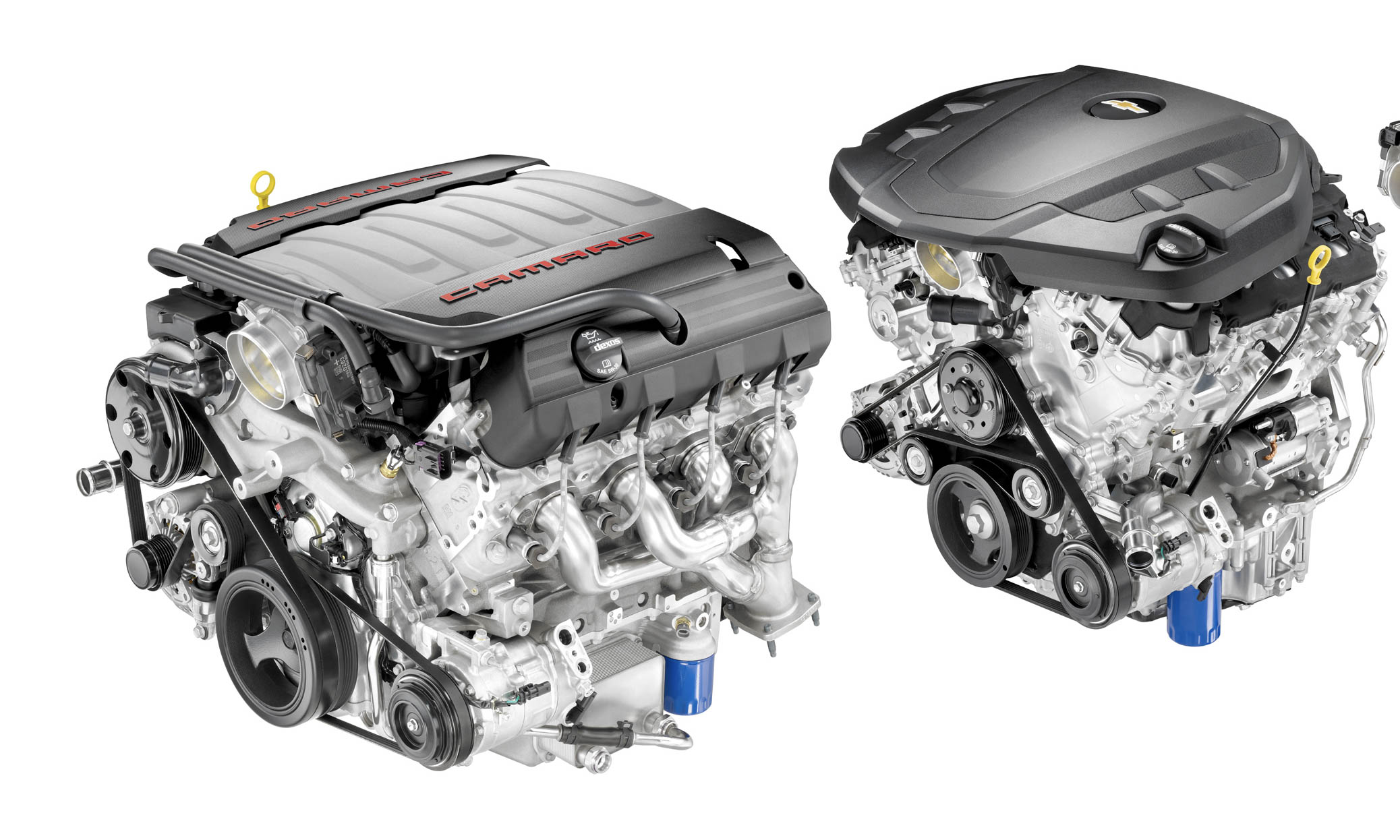 © General Motors
V6 and V8 Power
An all-new 3.6-liter V6 engine will also be added to the roster, putting out 335 horsepower. And the sportiest of the Camaros — the SS — gets a 6.2.-liter LT1 V8 engine boasting 455 horsepower — the most power Chevrolet has ever offered in the SS. An 8-speed automatic or 6-speed manual is offered with any engine. 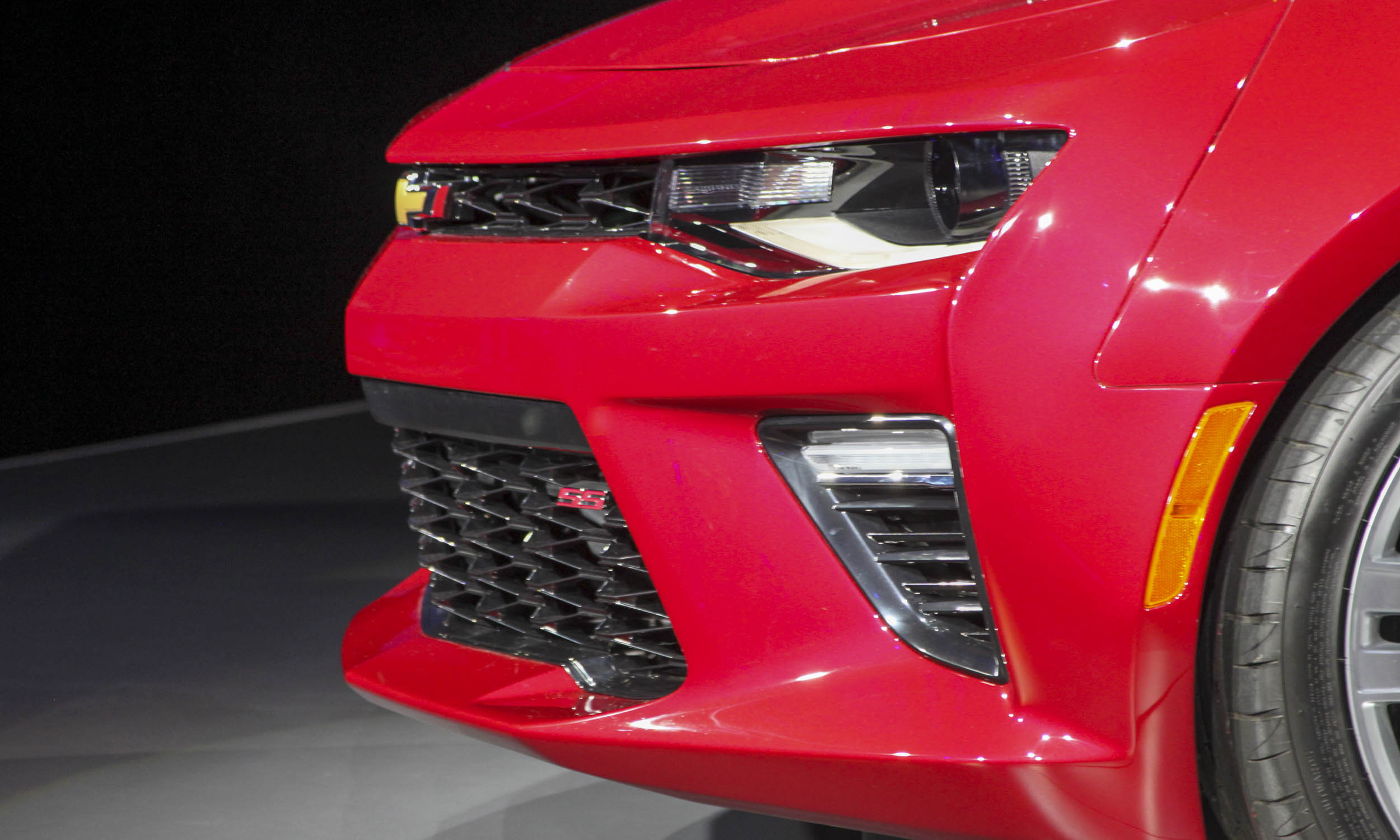 © Perry Stern, Automotive Content Experience
Lighter Weight
In addition to increasing power, the Camaro team had to improve performance as well as fuel economy. To meet this goal, engineers managed to make the new model more than 200 pounds lighter than the outgoing generation. “Our global engineering team is incredibly passionate about Camaro, and they sweated all the details to make Gen 6 the best Camaro we could possibly put into the hands of our customers,” said Mark Reuss, GM executive vice president of global product development. 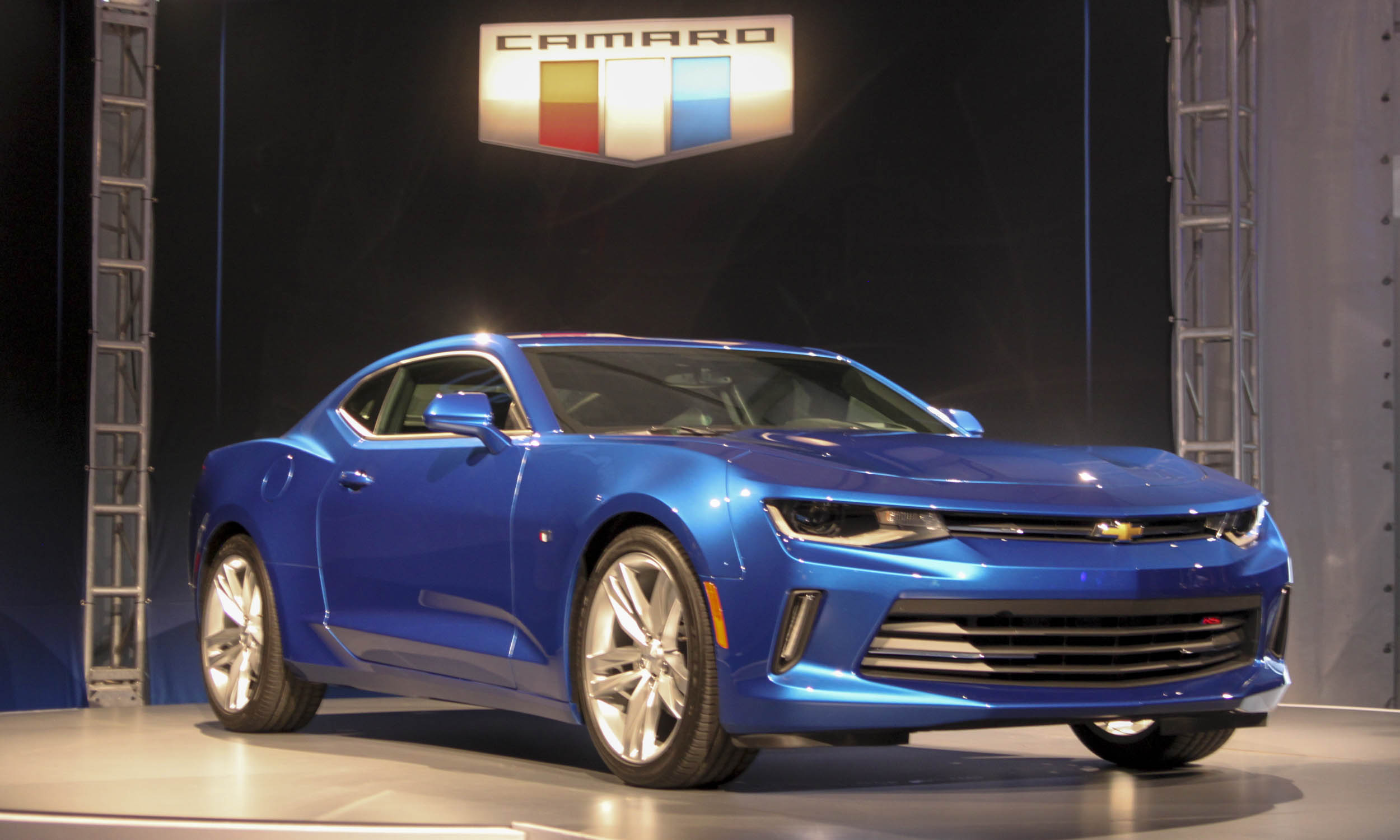 © Perry Stern, Automotive Content Experience
Smaller Footprint
The 2016 Camaro is smaller than its predecessor — wheelbase and overall length are about 2 inches shorter, and new car is about an inch narrower and shorter. GM told us the space lost was primarily from the already tight rear seat; the logic being that the rear seat was already tight and seldom used by customers. That said, one of the attending journalists at Belle Isle did manage to get in the back seat and quipped that it’s survivable, at least for short trips. 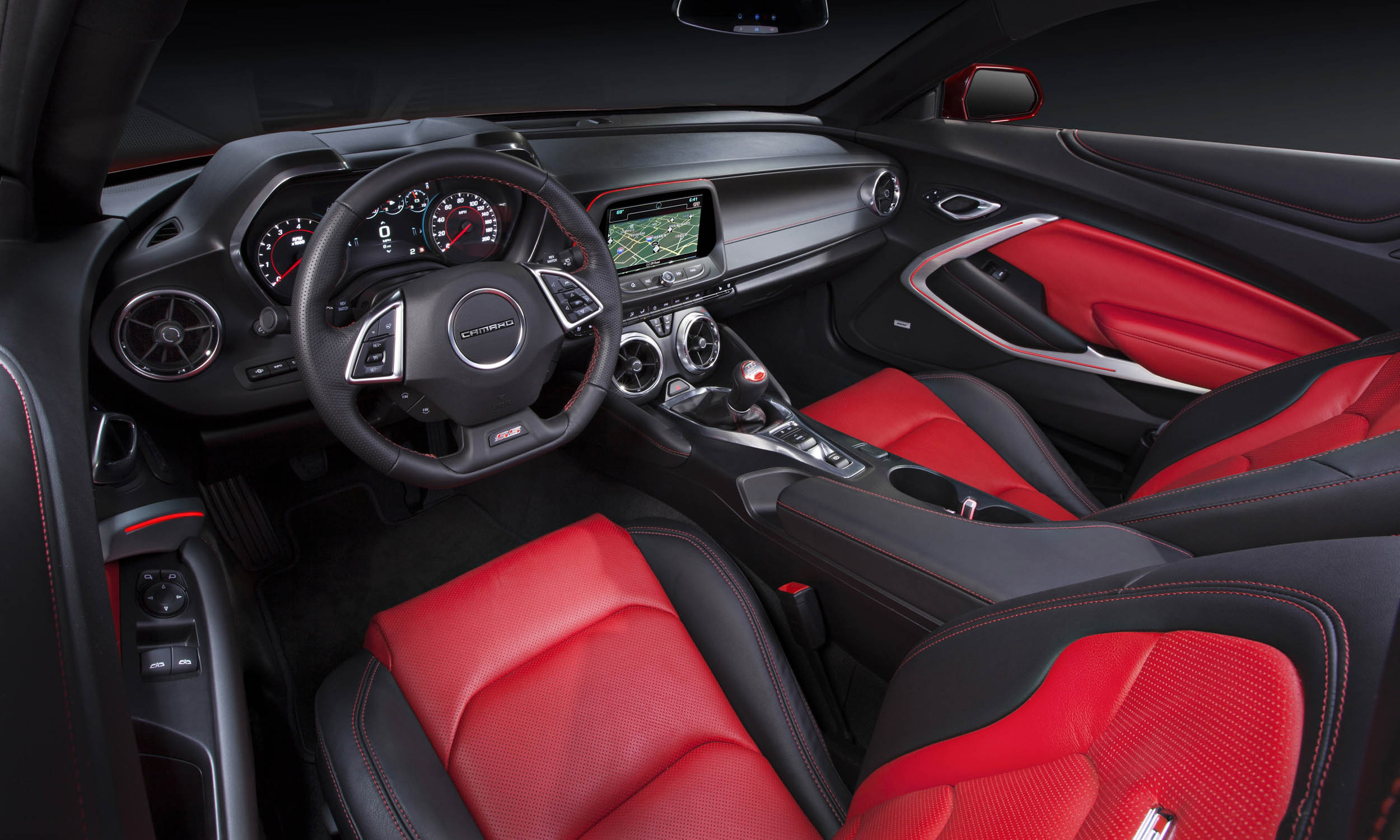 © General Motors
Improved Interior
The rear seat may be tighter, but the overall interior is greatly improved compared with the outgoing model. Higher-quality materials are used throughout the cabin; seats are both attractive and comfortable. Although the entire car is slightly smaller, the dashboard is designed to look wider and thus provide a more spacious feel. Chevrolet designers made clever use of space by making controls simpler, which allows for a lower dashboard. 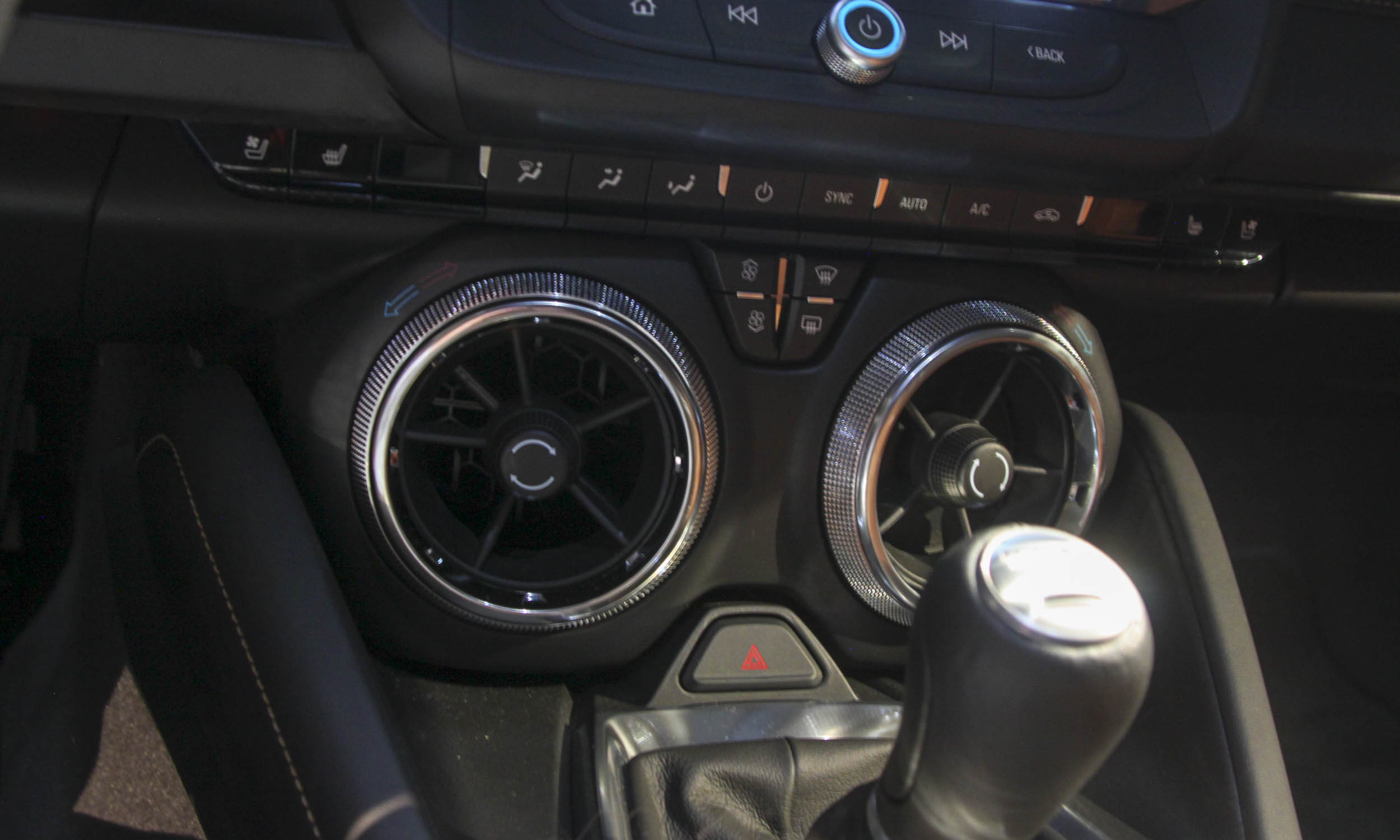 © Perry Stern, Automotive Content Experience
Innovative Climate Control
One innovative example: center vents that double as climate-control knobs. Camaro will also have available LED interior lighting — doors, cupholders, the nav screen surround — that can display any of more than 20 different colors. Up-level Camaros will have real aluminum trim on the doors and attractive contrast stitching on the flat-bottomed steering wheel and other surfaces. 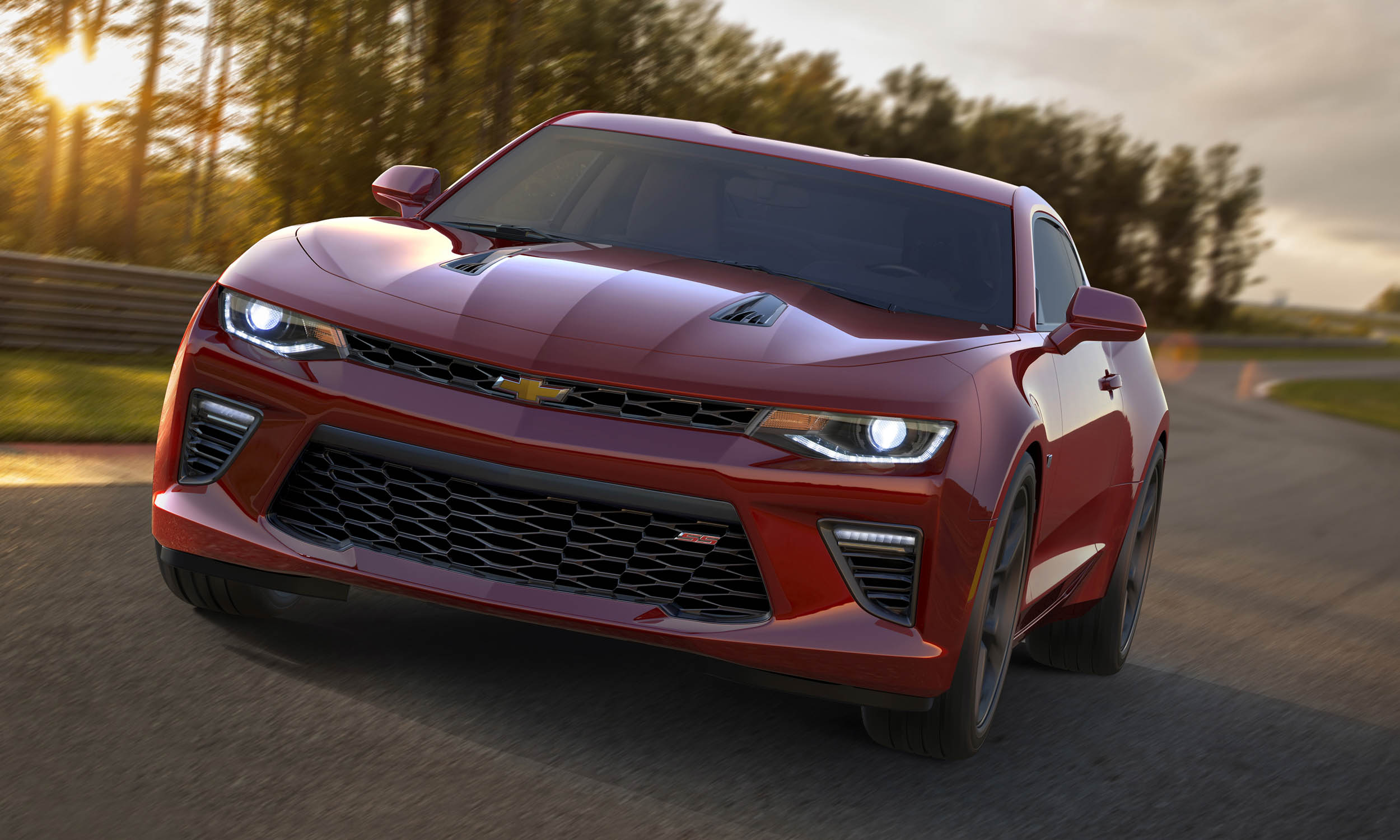 Drive Mode
Another new feature for the 2016 Camaro is Drive Mode, which can be selected via a switch in the center console. Depending on the trim level and engine/transmission combination, the car can adjust up to eight different vehicle attributes for Snow/Ice, Tour, Sport and Track (SS only). Switching modes makes adjustments to the electronic throttle, automatic transmission shift map, stability control system, engine sound management, steering calibration, magnetic ride calibration and ambient lighting. 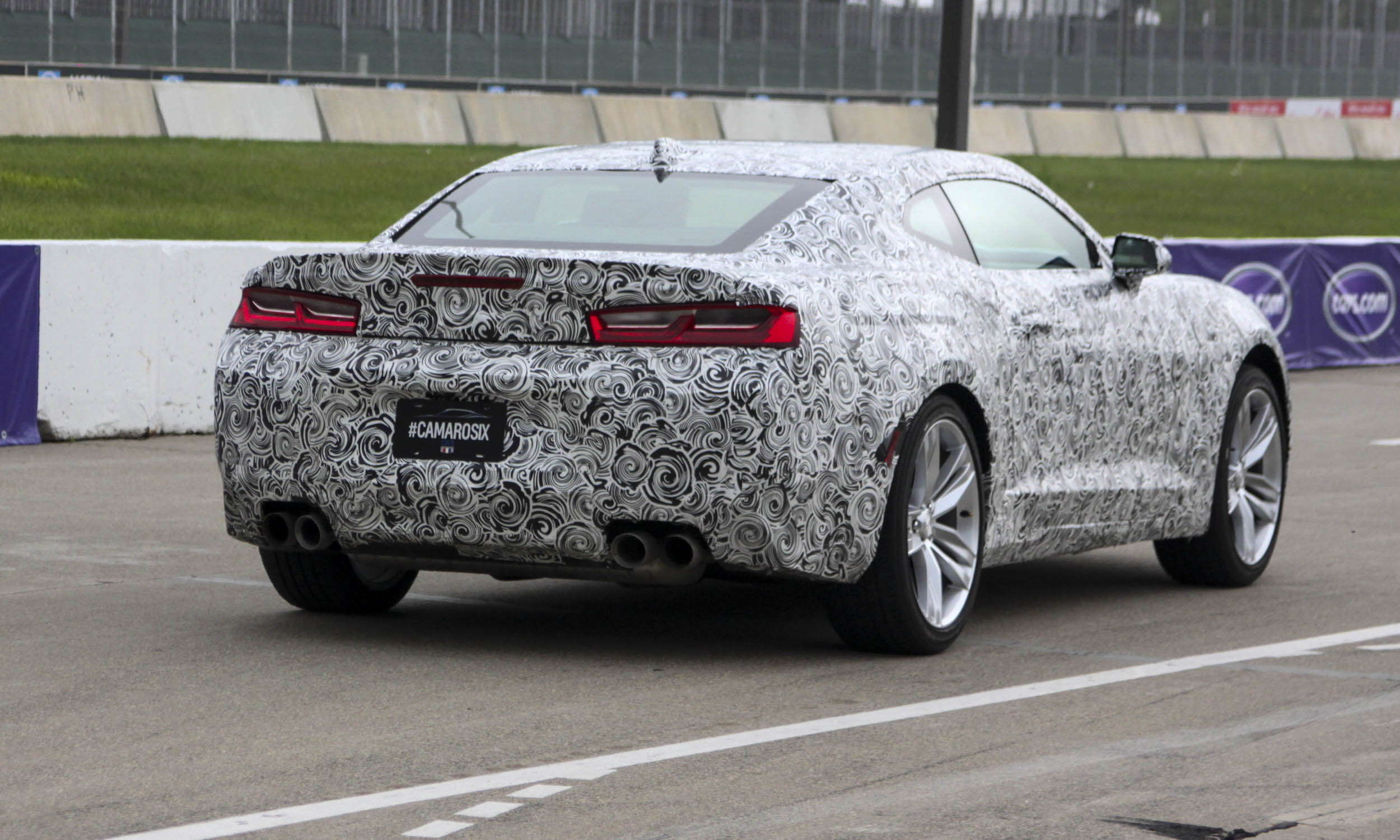 © Perry Stern, Automotive Content Experience
Better Performance
The new Camaro features a stiffer platform as well as the aforementioned smaller dimensions. When combined with the lower weight, increased power and more aerodynamic styling, the 2016 Camaro should handily outperform the outgoing model. We had a chance to drive a V6-powered prototype and compare it directly against the current V6 Camaro, and the new model easily satisfied our expectations. The new car feels much lighter and more agile with impressive steering and braking response. The 2016 Camaro is quick, and the 8-speed automatic transmission shifts smoothly and quickly. The exhaust note has surprisingly good roar — especially for a V6. 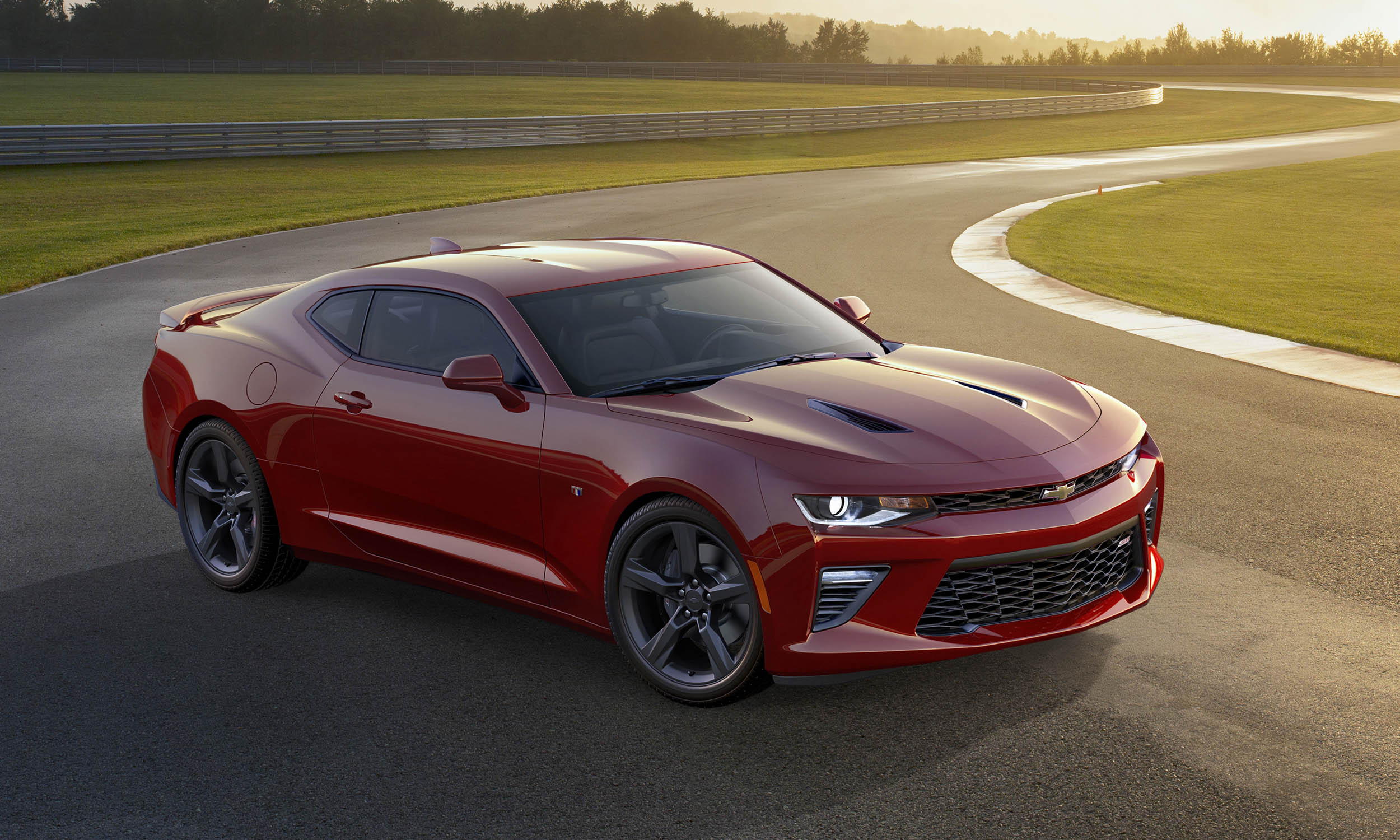 © General Motors
Game Changer
The fifth-generation Camaro has proven to be quite popular and certainly looks the part as the modern version of Chevrolet’s classic pony car. But it has a number of drawbacks: the interior is underwhelming, and unless you upgrade to one of the high-powered variants, the performance is nothing exciting. That has all changed with the 2016 model. Exterior and interior designs are stylish and feel upscale, while the three engine choices should all be attractive options. Best of all, performance will improve considerably over the outgoing Camaro. Despite our limited time behind the wheel, we’re completely convinced this lighter, more agile sixth-gen Camaro will be the best one yet. 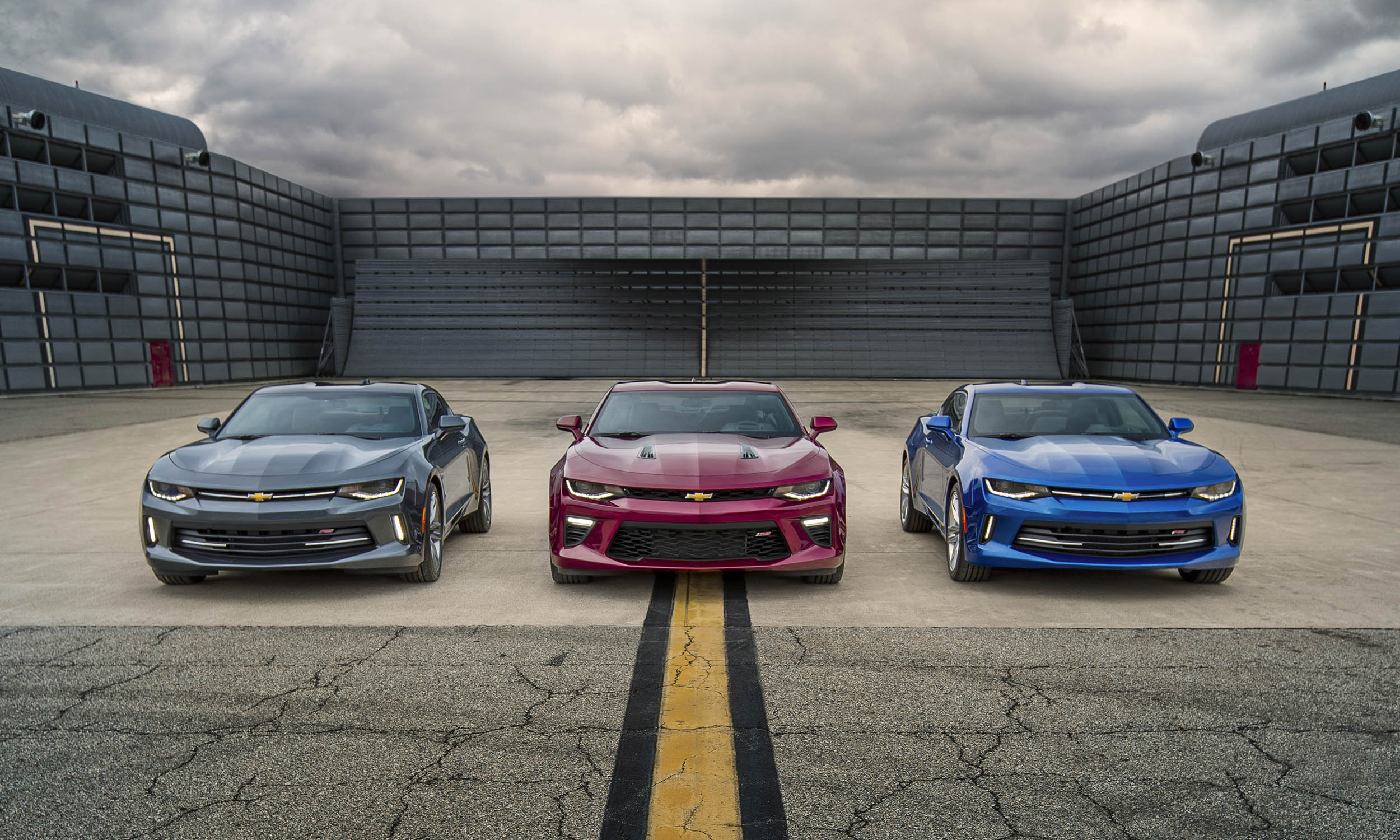 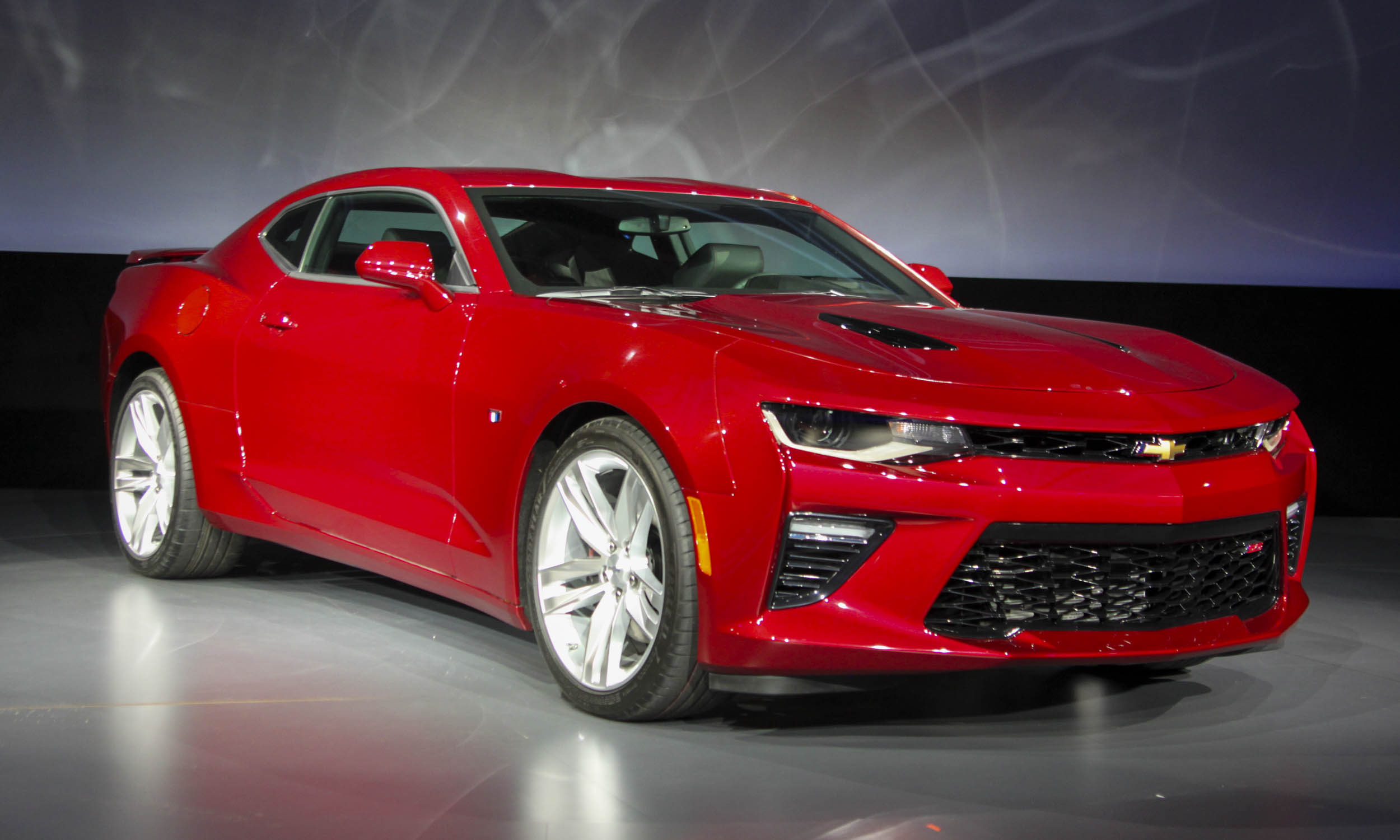 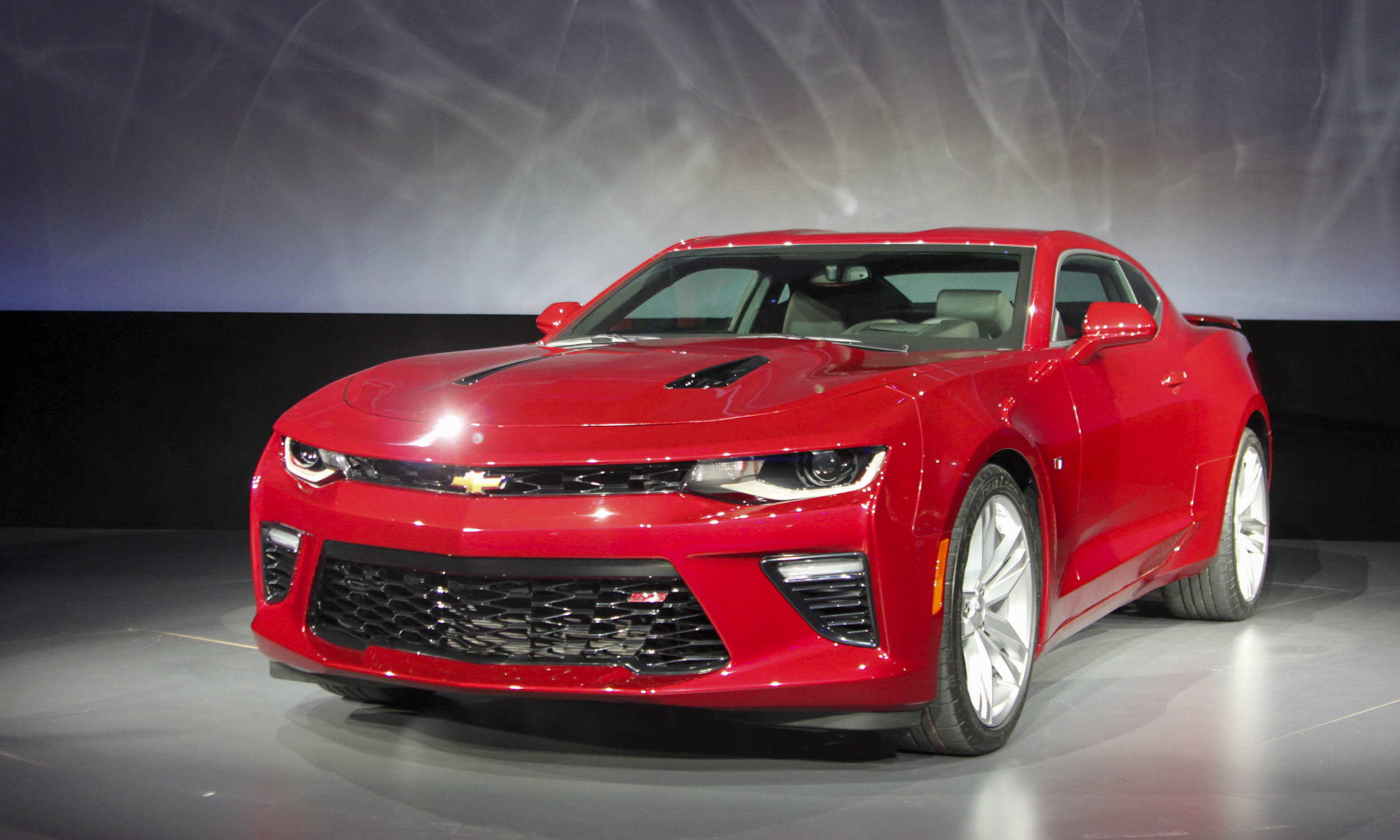 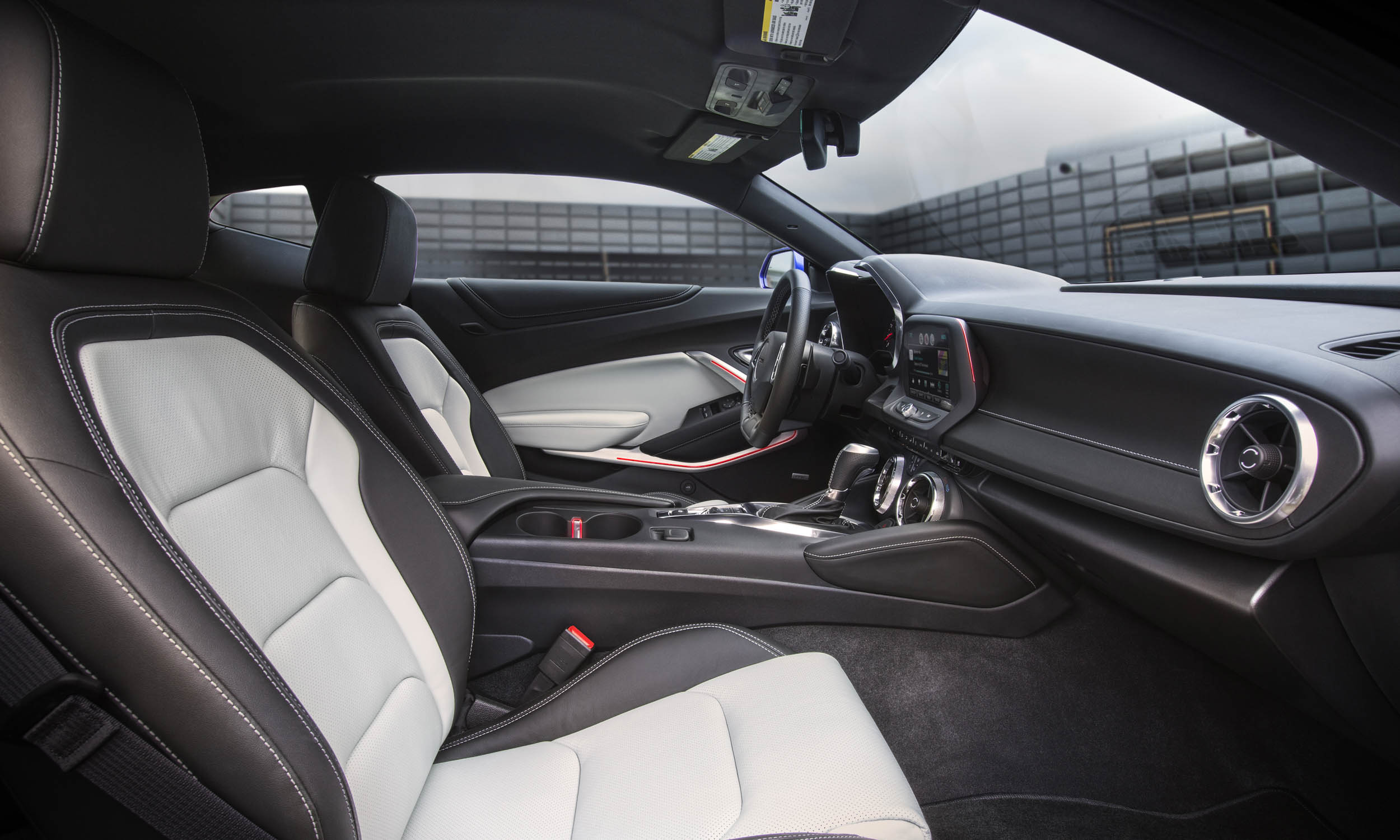 © General Motors
2016 Chevrolet Camaro RS
Note the LED lights in the door panel, as well as around the center screen and in the cupholder. 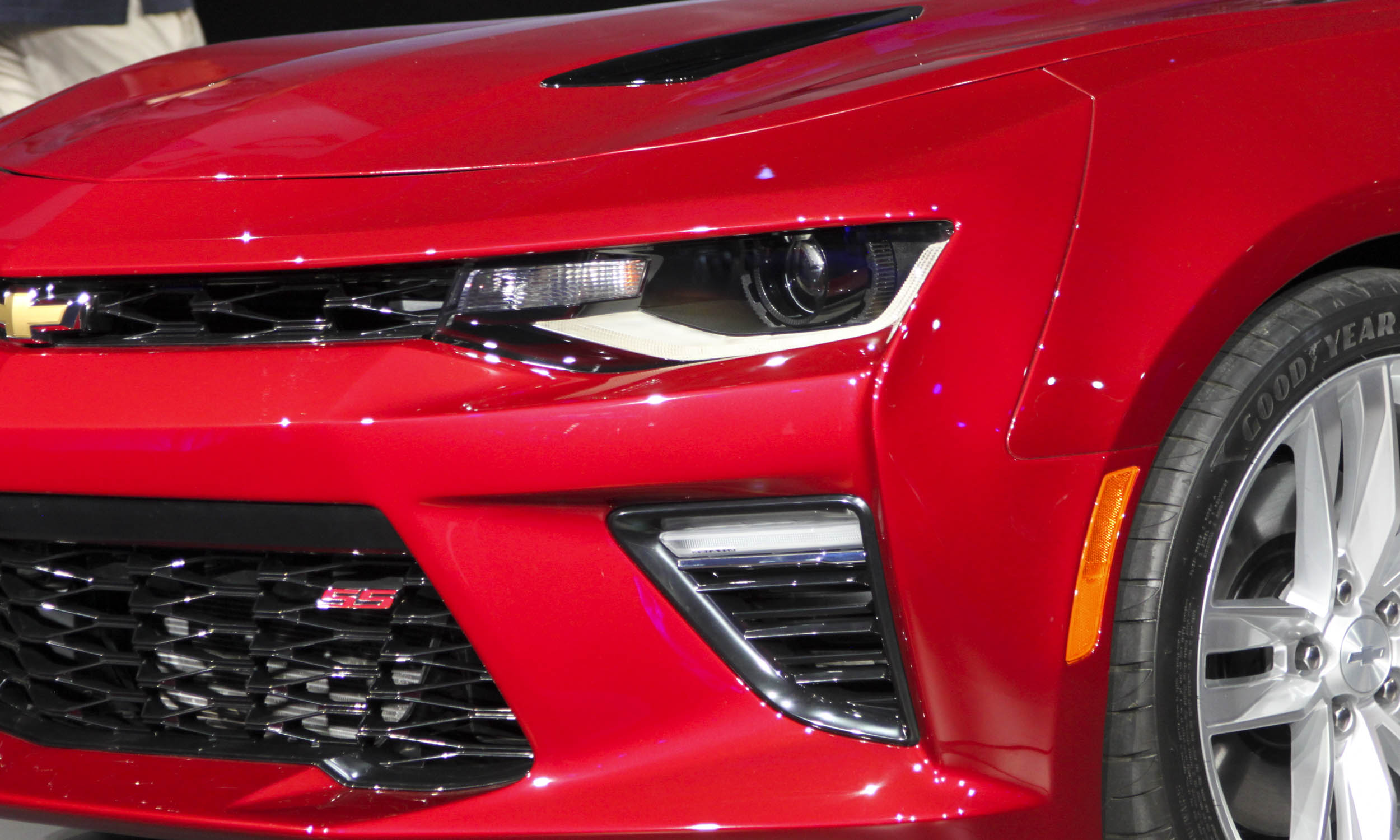 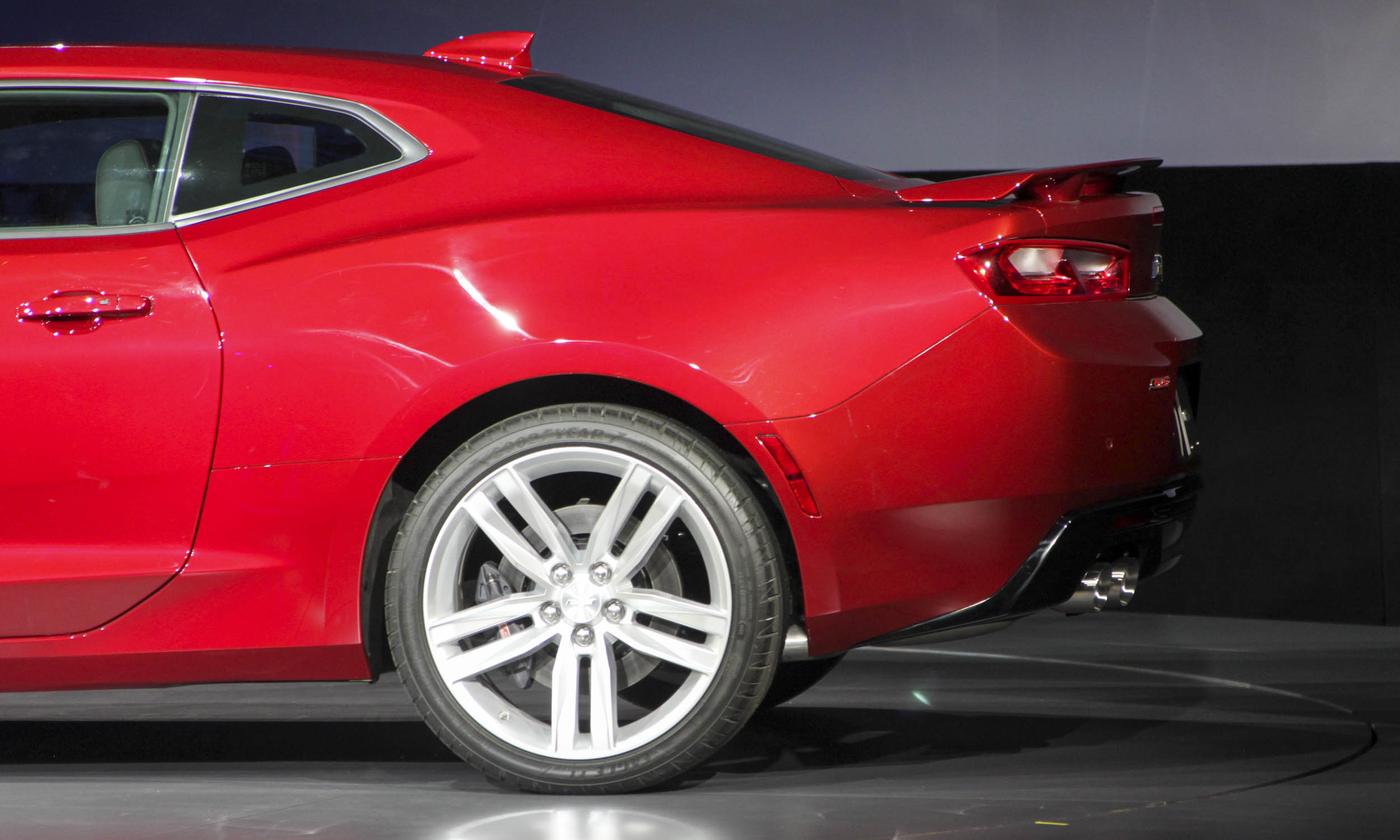 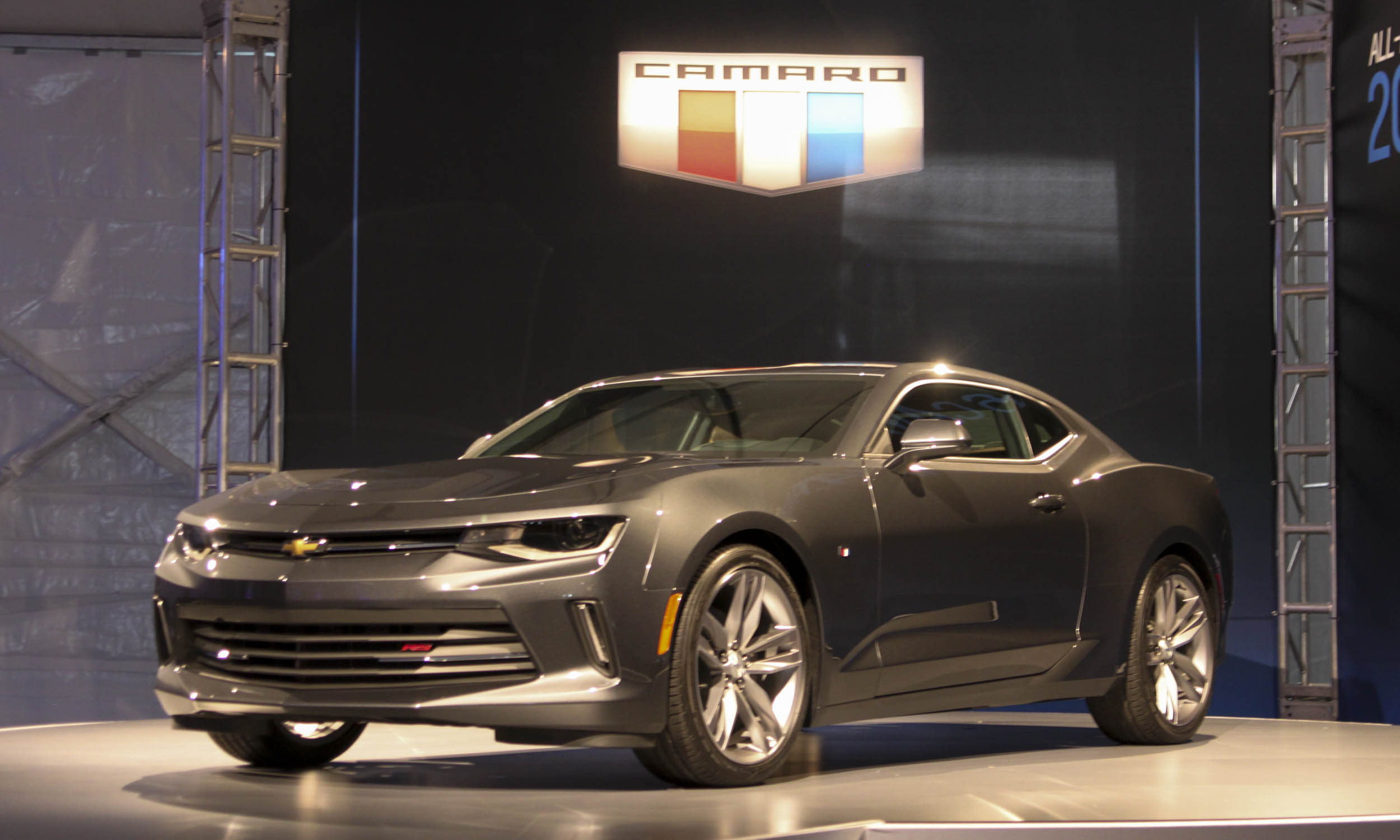 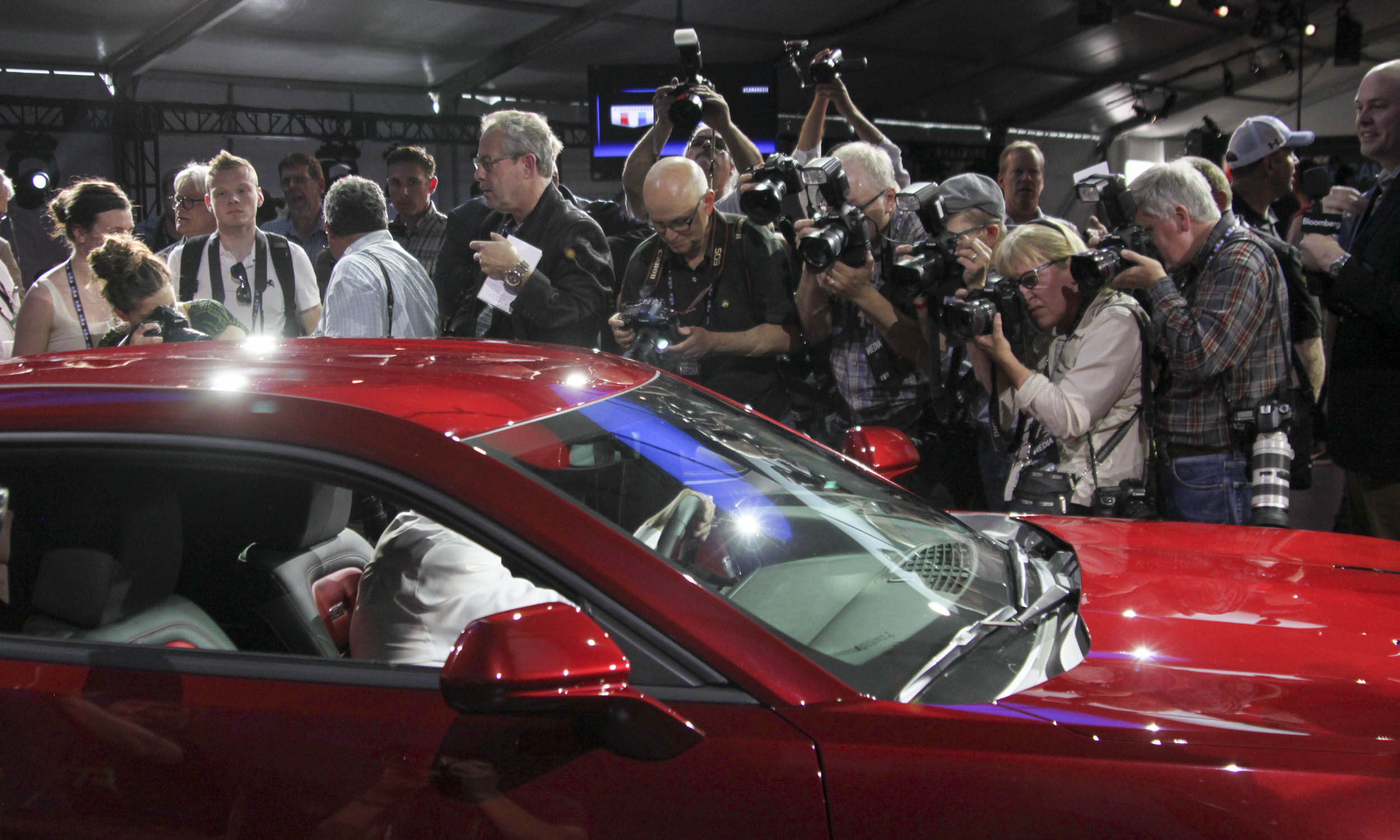 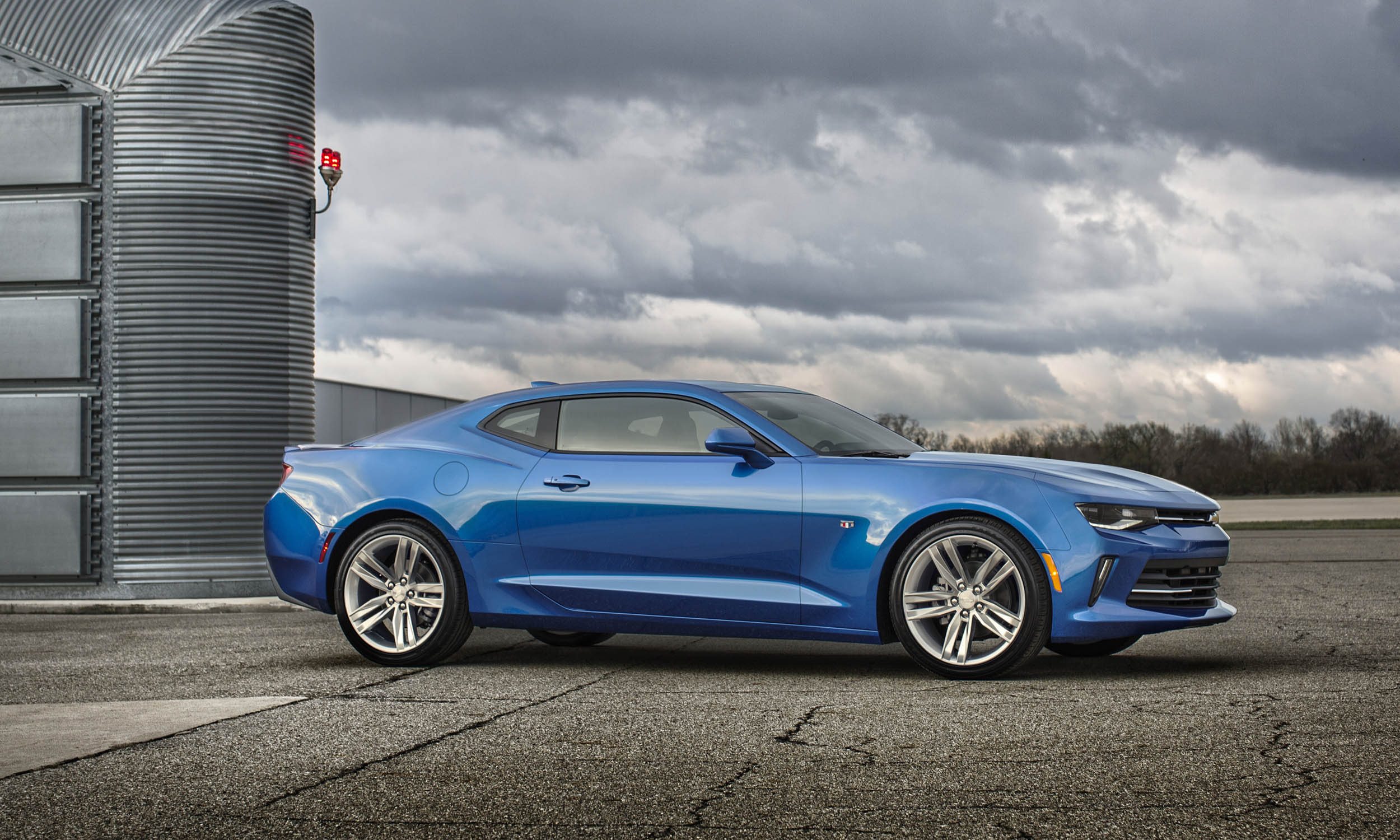 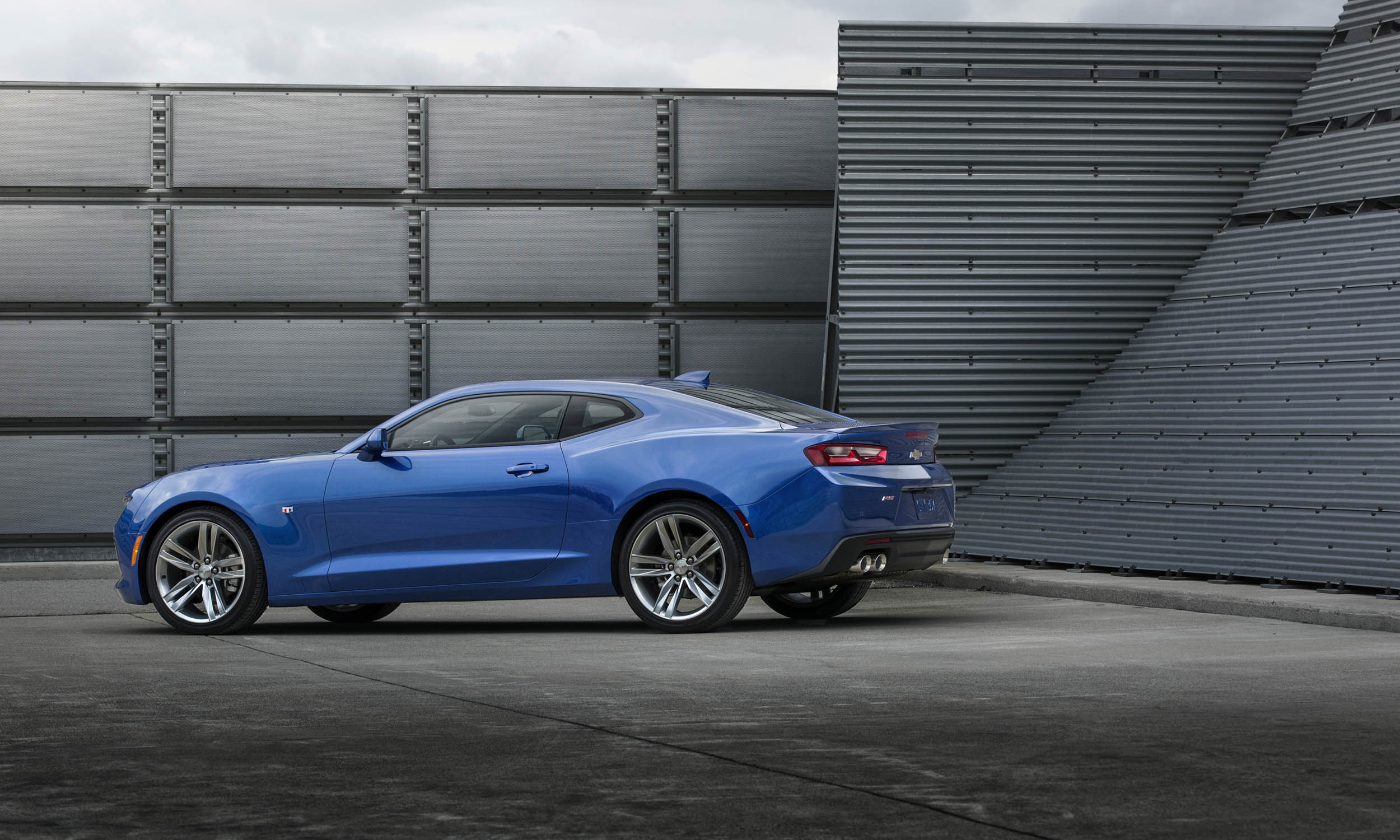 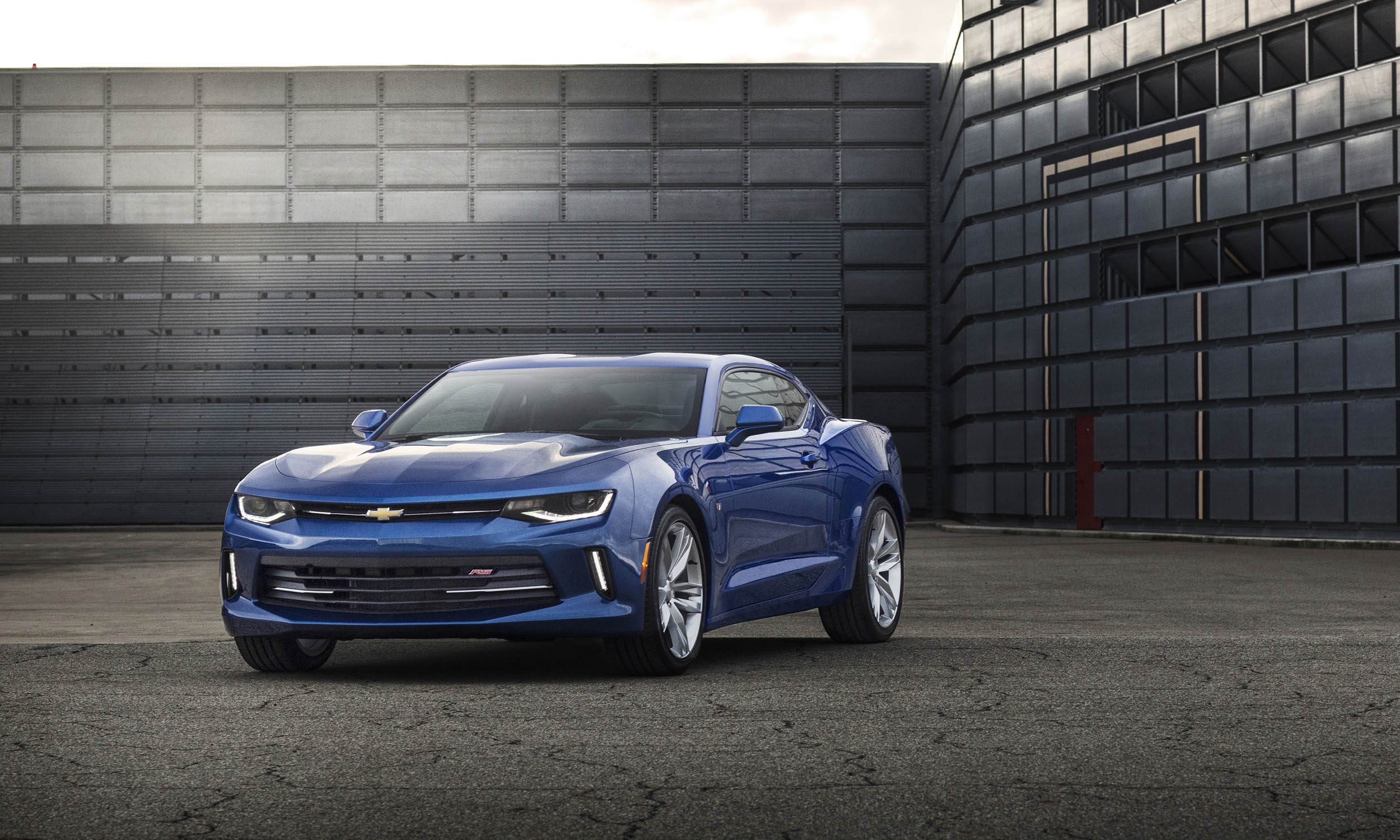 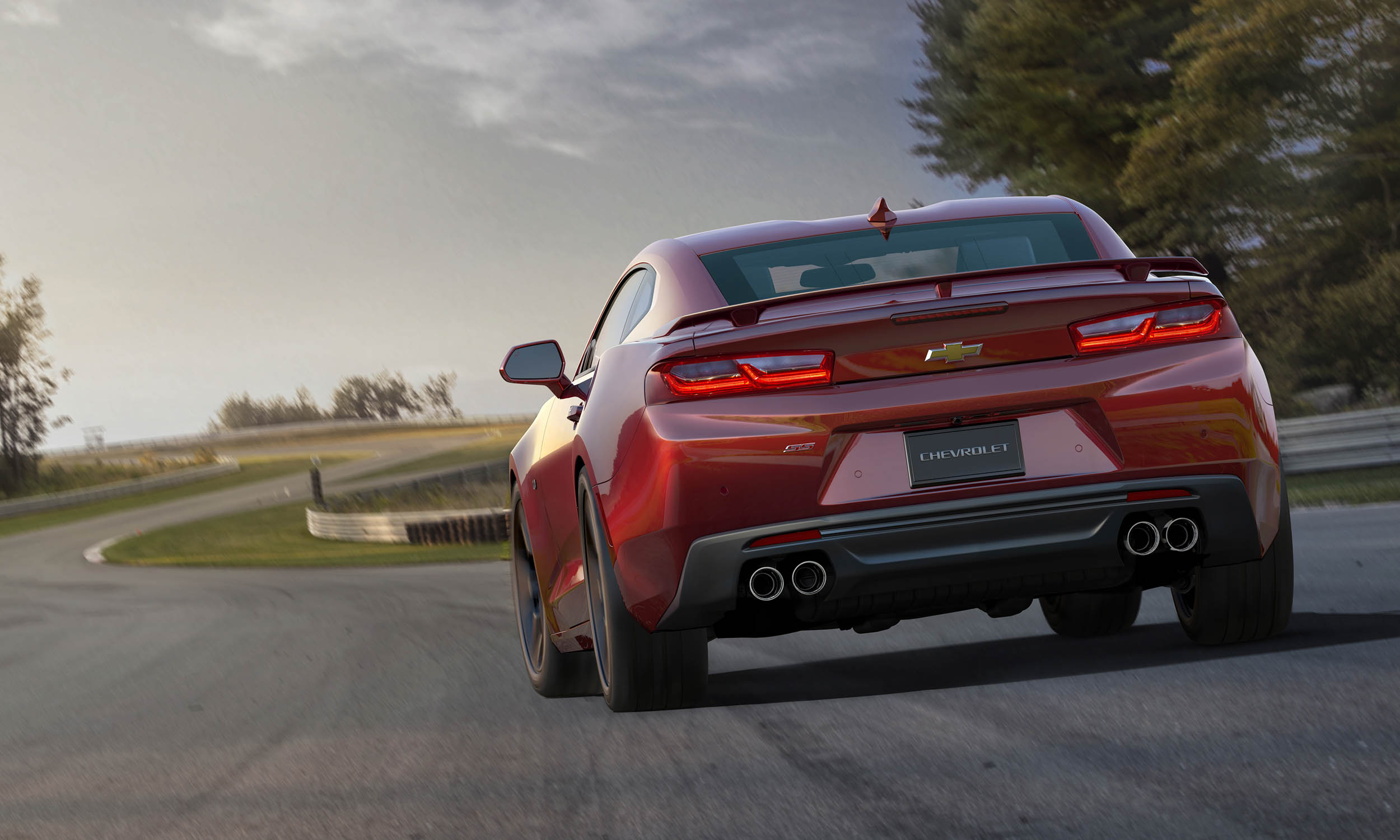