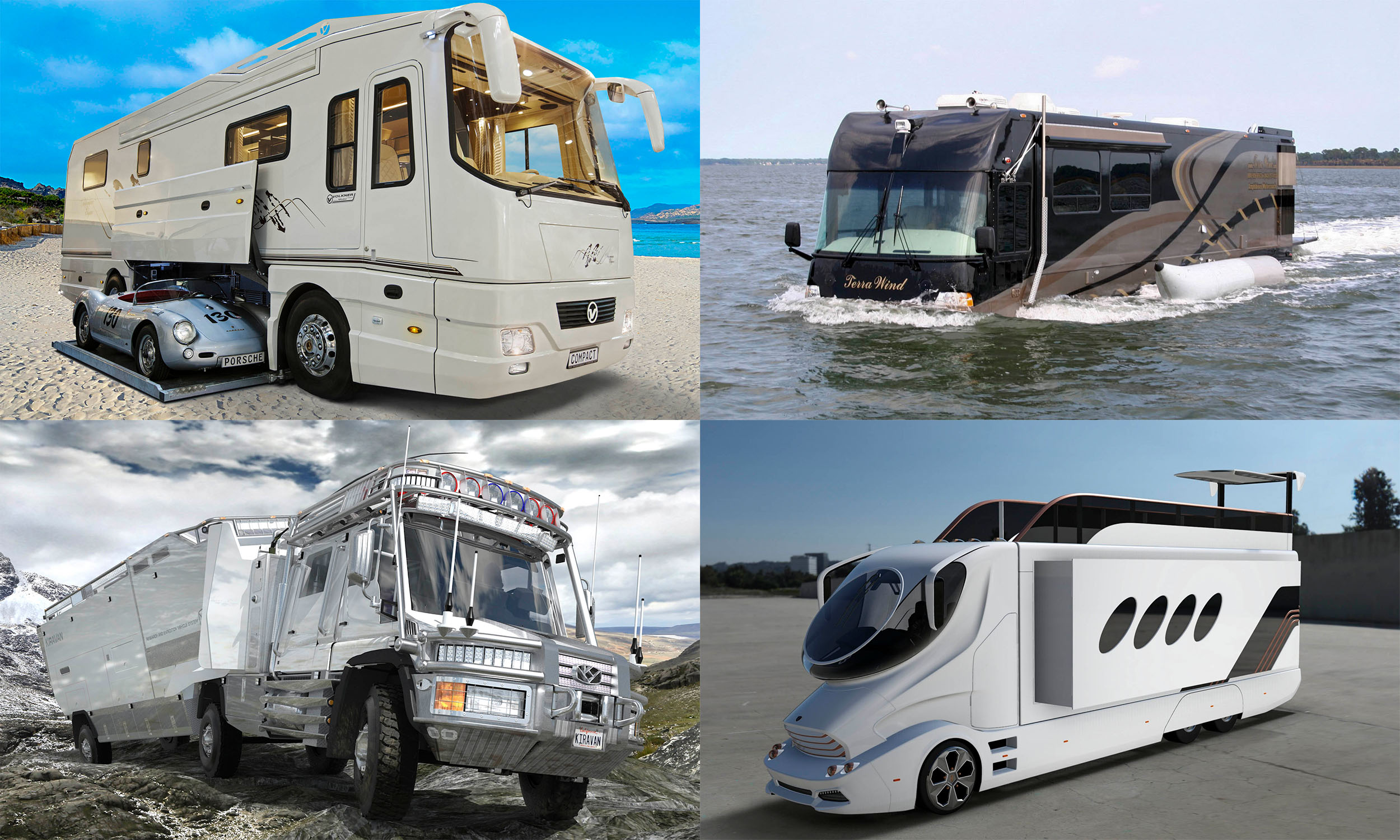 RVs on the Wild Side
For some folks, the concept of camping means heading into the wilderness with nothing more than what can be carried in a backpack to “rough it” in the natural elements. But for those who wish to experience the great outdoors without straying too far from familiar pavement — or leaving the luxuries of home (or hotel) behind — we’ve assembled some excellent options for opulent outdoorsy types. Most of these extreme recreational vehicles, or RVs, are not cheap or small, but they let folks head out into nature and — if they so choose — completely ignore it. Here’s a look at some of the wildest RVs on and off the road. 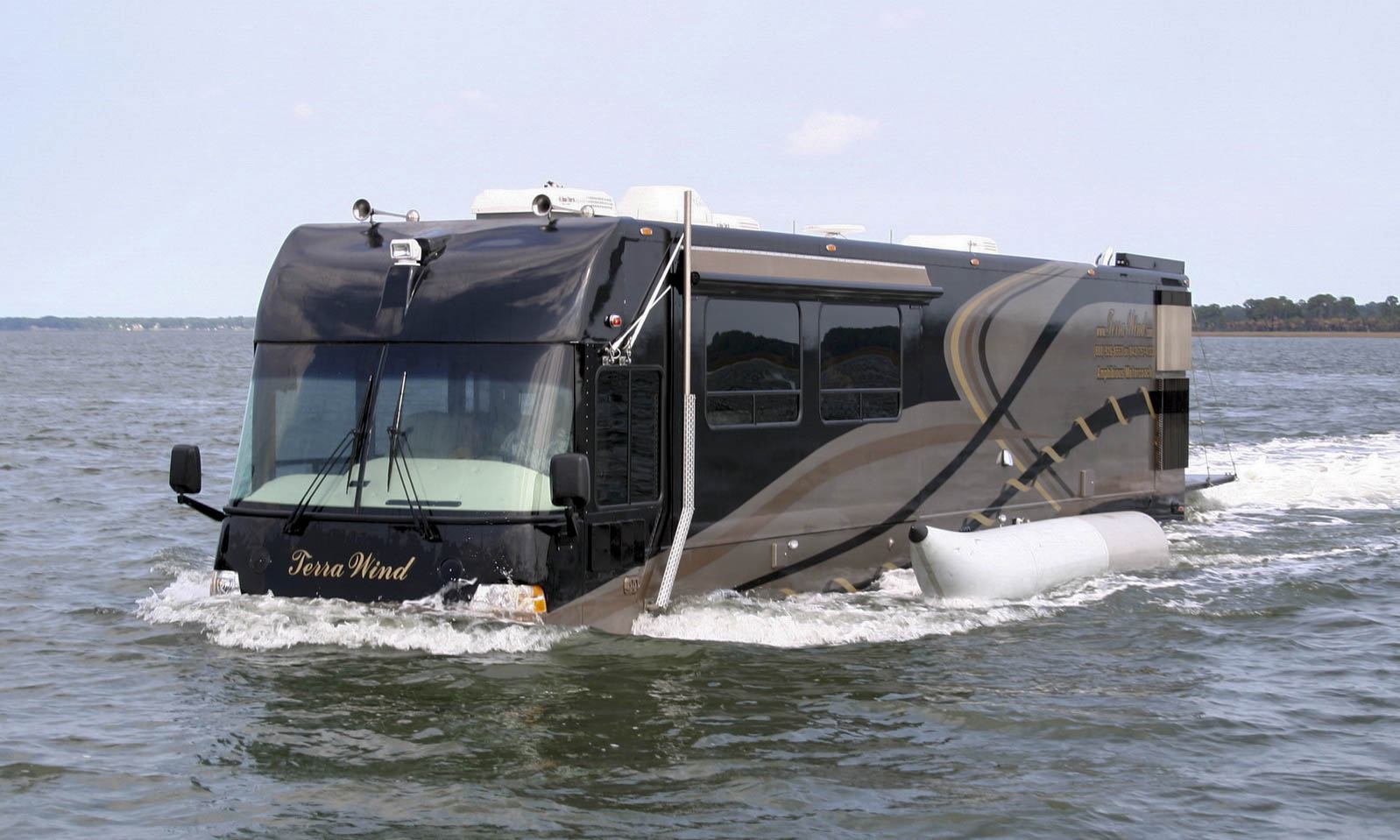 CAMI Terra Wind
Estimated price: $1.2 million
With the large and luxurious Terra Wind, you don’t need to tow a boat to the lake for some fun on the water — this entire RV becomes your boat! The Terra Wind can cruise on land at 80 mph, or on water at 7 knots by employing two 19-inch bronze propellers. To launch, simply drive the big RV into the water at any boat ramp or solid, gently sloping shore. Once in the water, the Terra Wind’s driver puts the standard transmission into neutral and engages the marine transmission. A joystick enables on-water navigation once the propellers spool up. 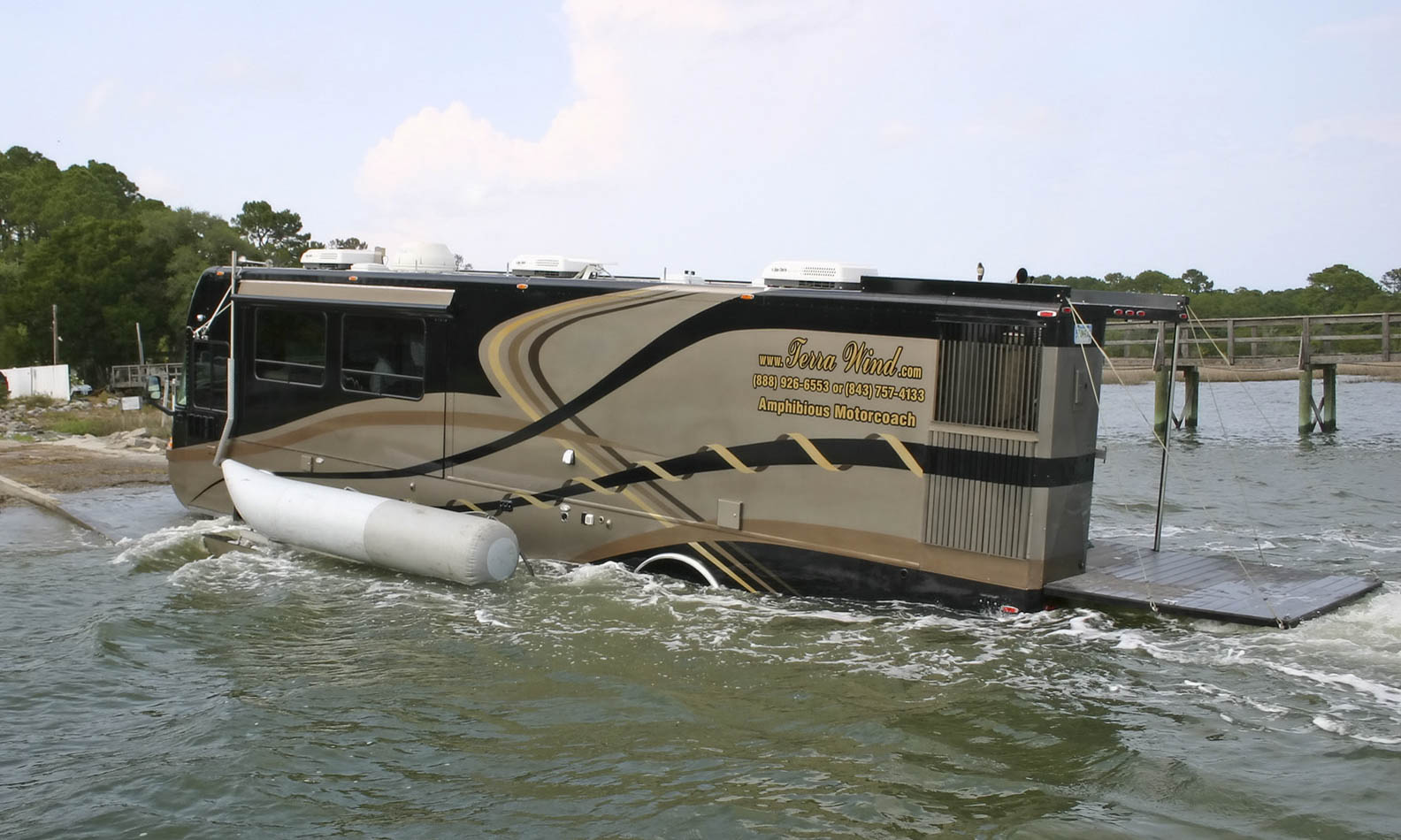 CAMI Terra Wind
Fully equipped with all luxury amenities expected in a high-end RV, the Terra Wind includes a 42-inch flat-screen TV and even a Jacuzzi/shower combo in the master bathroom. An optional diving platform unfolds from the rear porch so swimmers can properly enjoy their time on the water. The roof may be used as a sundeck as well. 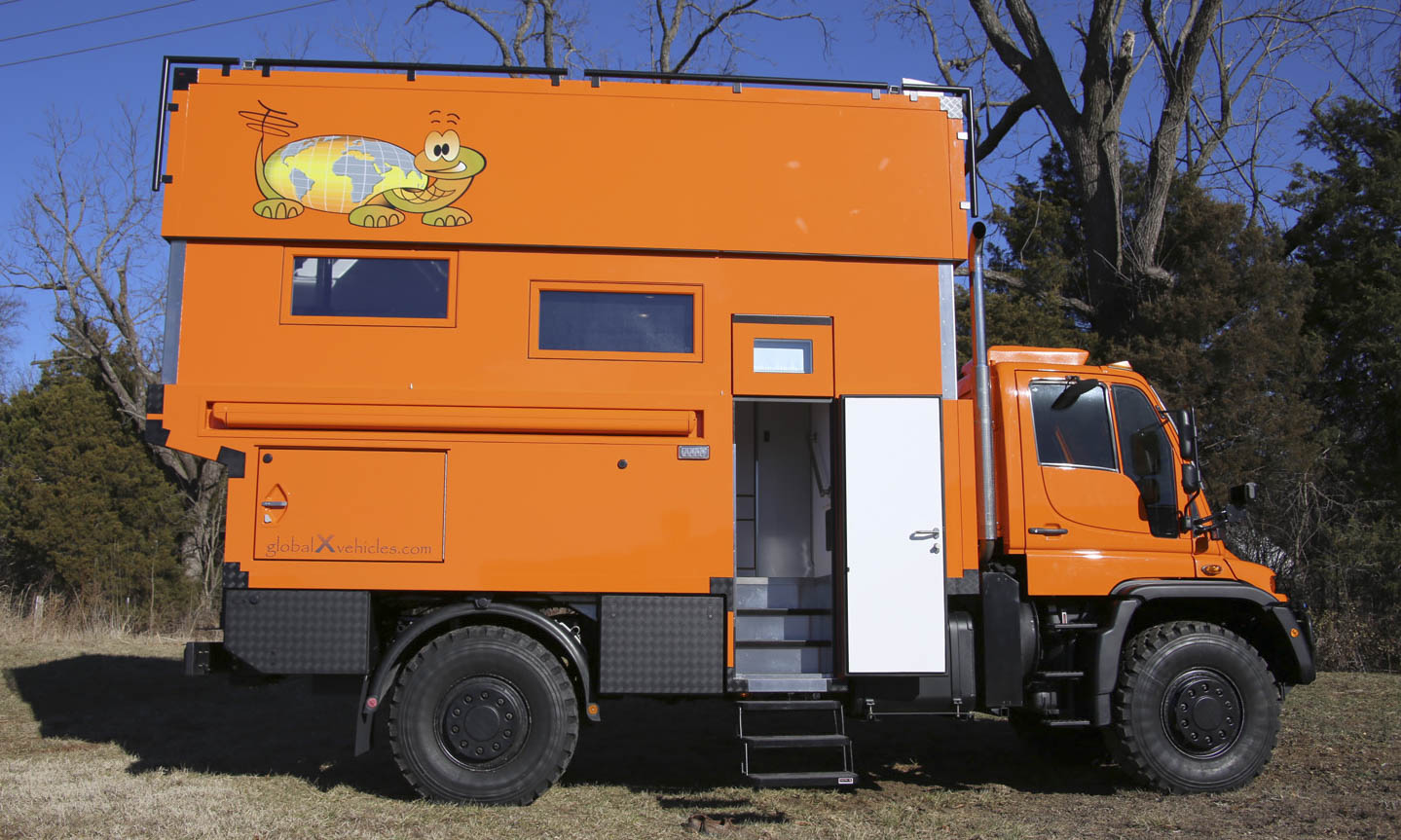 Global Expeditions Pangea
Estimated price: $650,000–$800,000
For those who want to get away from it all — but at the same time take it all with them — Global Expeditions builds an RV that caters to every need. Custom built on a heavy-duty truck chassis, the Pangea features a roof that expands upward about three feet to provide a spacious two-story interior. The Pangea also has a built-in 3200-watt diesel generator, air-conditioning, solar panels, and a 26,000-BTU heater so you stay comfortable no matter where you park — or when. 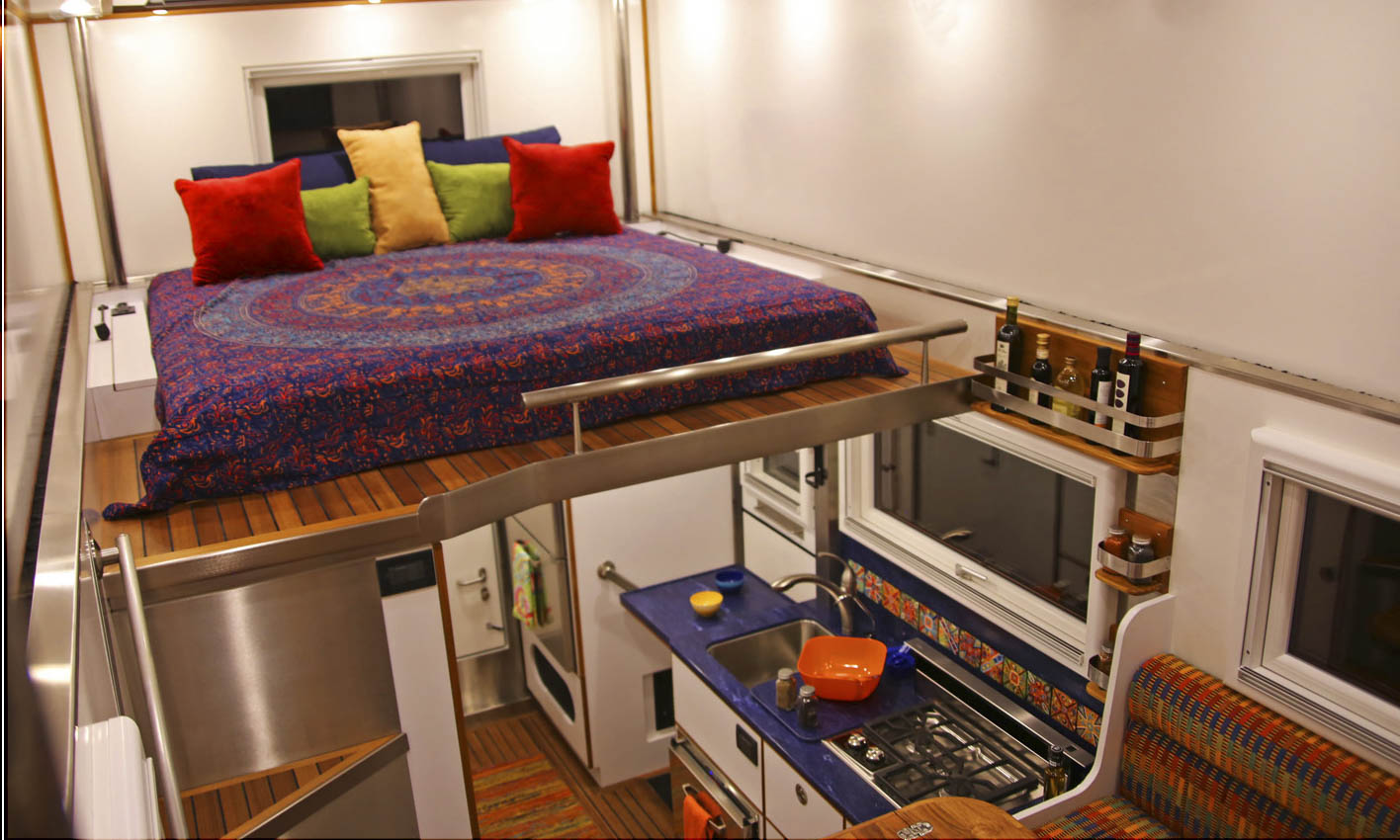 Global Expeditions Pangea
It may look tough on the outside, but inside the Pangea features many refinements including granite countertops, handcrafted wood kitchen cabinets, cork flooring and even custom-made bedspreads for the two queen-size beds upstairs. Users can sequester themselves in remote locations as long as they like, since the Pangea has storage for up to 140 gallons of water, a full refrigerator and freezer as well as countless storage cubbies. 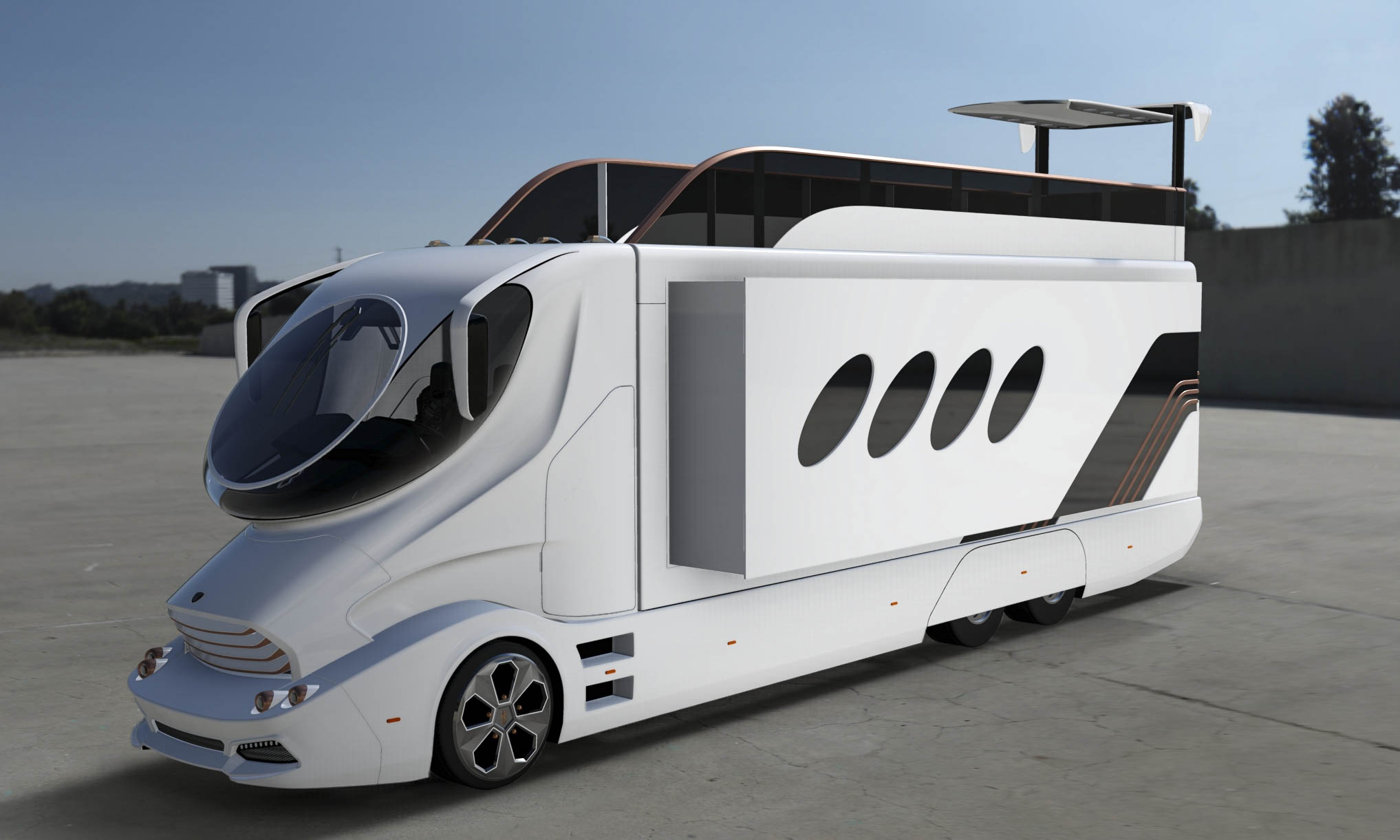 Marchi Mobile Palazzo Superior
Estimated price: $3,000,000
Bespoke motorcoach builder Marchi Mobile claims the Palazzo Superior is the most luxurious mobile home in the world, and it is a tough claim to refute. Unlike anything else on the road, the Palazzo Superior looks extreme from any angle, starting with its unique round windshield. Another standout is the Sky Lounge. Railings automatically rise from the roof, providing a walled-in deck with integrated lounge furniture and a sunshade. 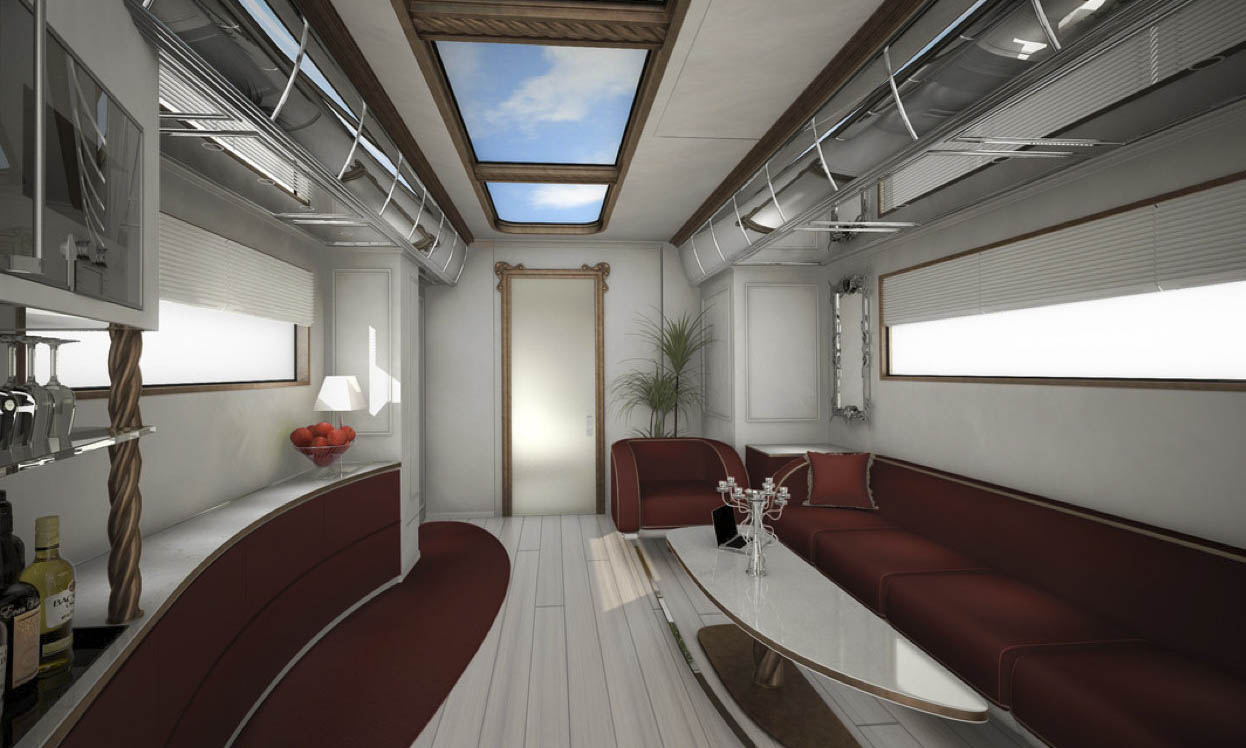 Marchi Mobile Palazzo Superior
Inside the Palazzo Superior, lucky occupants remain comfortable via a multi-zone air-conditioning system as well as radiant floor heating. A 12-foot-long couch sits within reach of the bar and wine cabinet. The master bedroom features a king-size bed. According to company literature, the bed is crafted by the same company that supplies beds to the British royal family. A private spa off the master bedroom features a glazed rainfall shower. 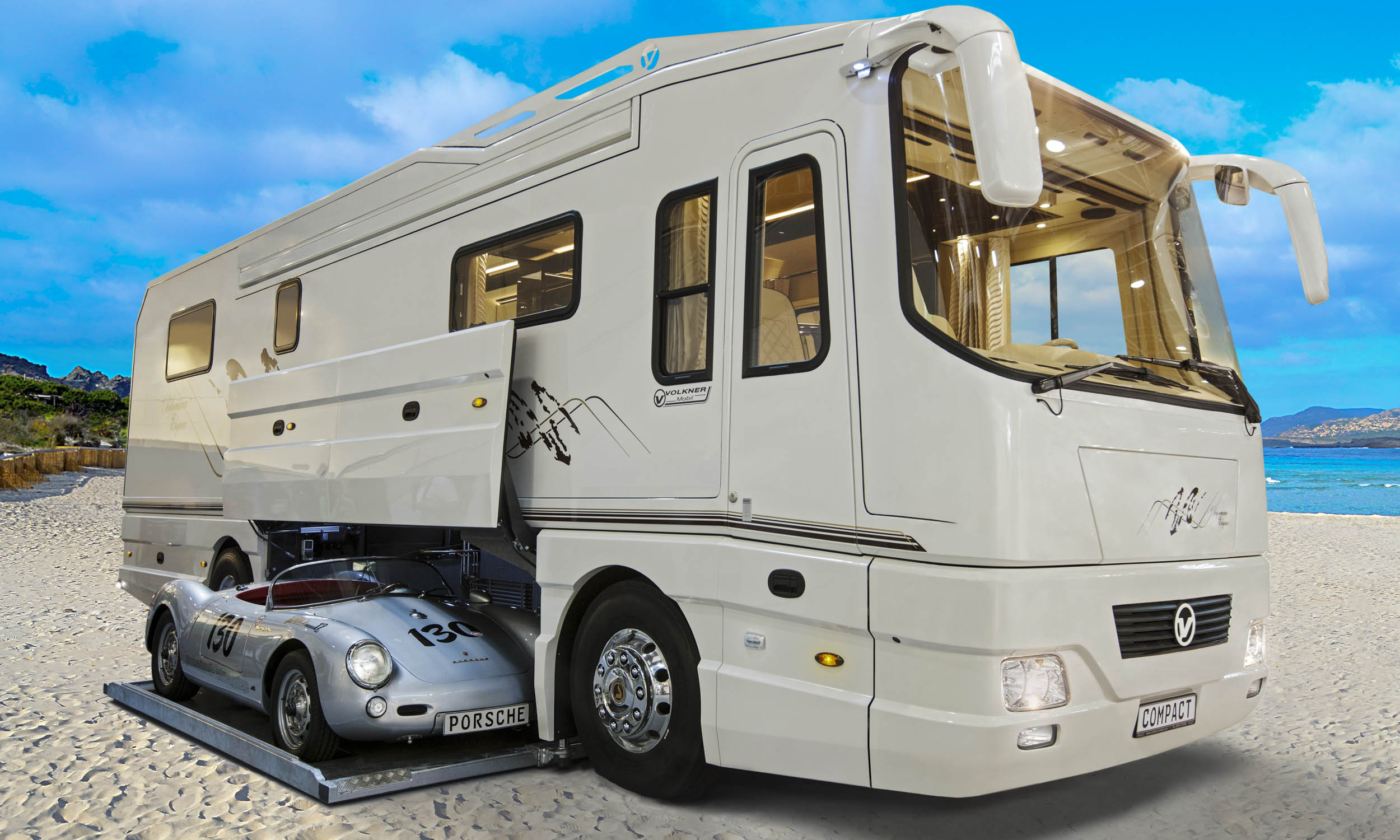 Volkner Mobil Performance
Estimated Price: $1,800,000
Known for building luxurious fully-featured RVs, this German company’s flagship model has one particular feature that makes it stand out from the rest — an integrated Central Garage. Situated between the front and rear axles is a separate compartment for a secondary vehicle. Behind a remote-operated door sits a motorized platform that slides out from the RV. Drive your vehicle onto the platform, press a button and the car gets tucked away beneath the motor home. The garage’s placement between the axles keeps the RV’s center of gravity low for better handling. The Central Garage has enough space for a midsize sedan or sports car — vehicle not included. 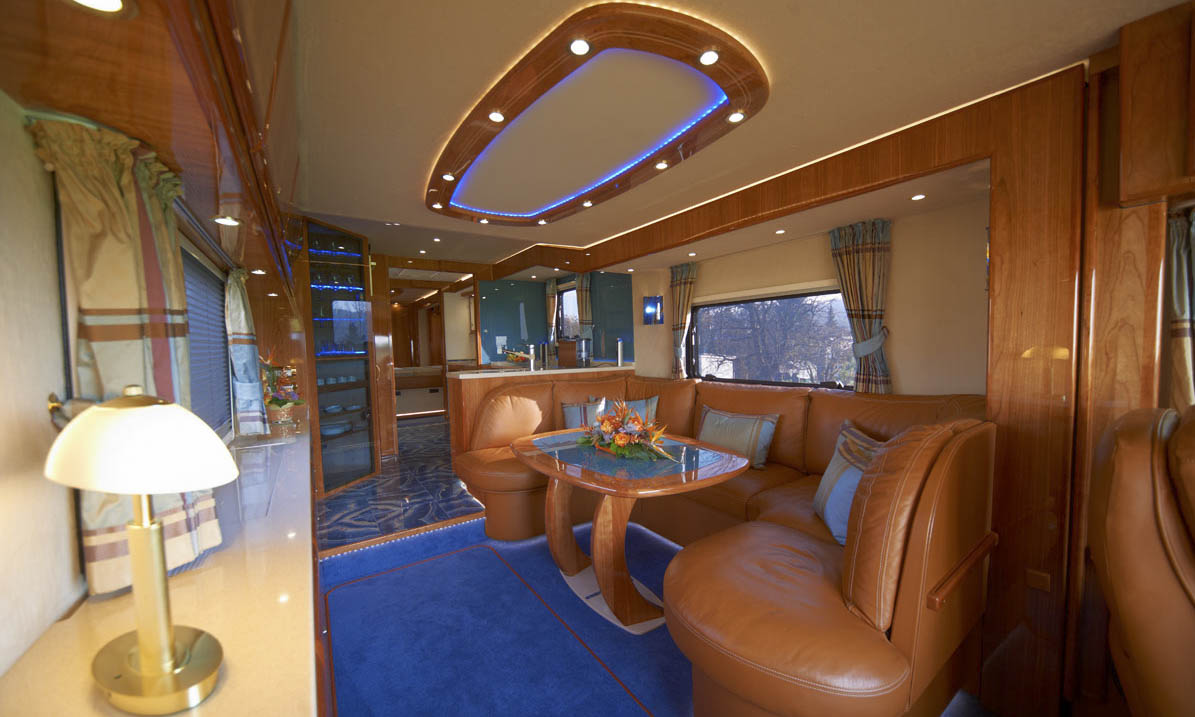 Volkner Mobil Performance
Fully customizable, the Volkner Mobil Performance can be equipped with such features as in-floor radiant heating, multiple flat-screen televisions, high-end sound systems and beautiful materials including rich leather, hardwood floors and stone tile. The full-size cook’s kitchen comes fully furnished and can be finished with granite countertops. A motorized, lengthy slide-out creates significantly more space in the living areas, leading to a full-size master bedroom and bath with a shower. 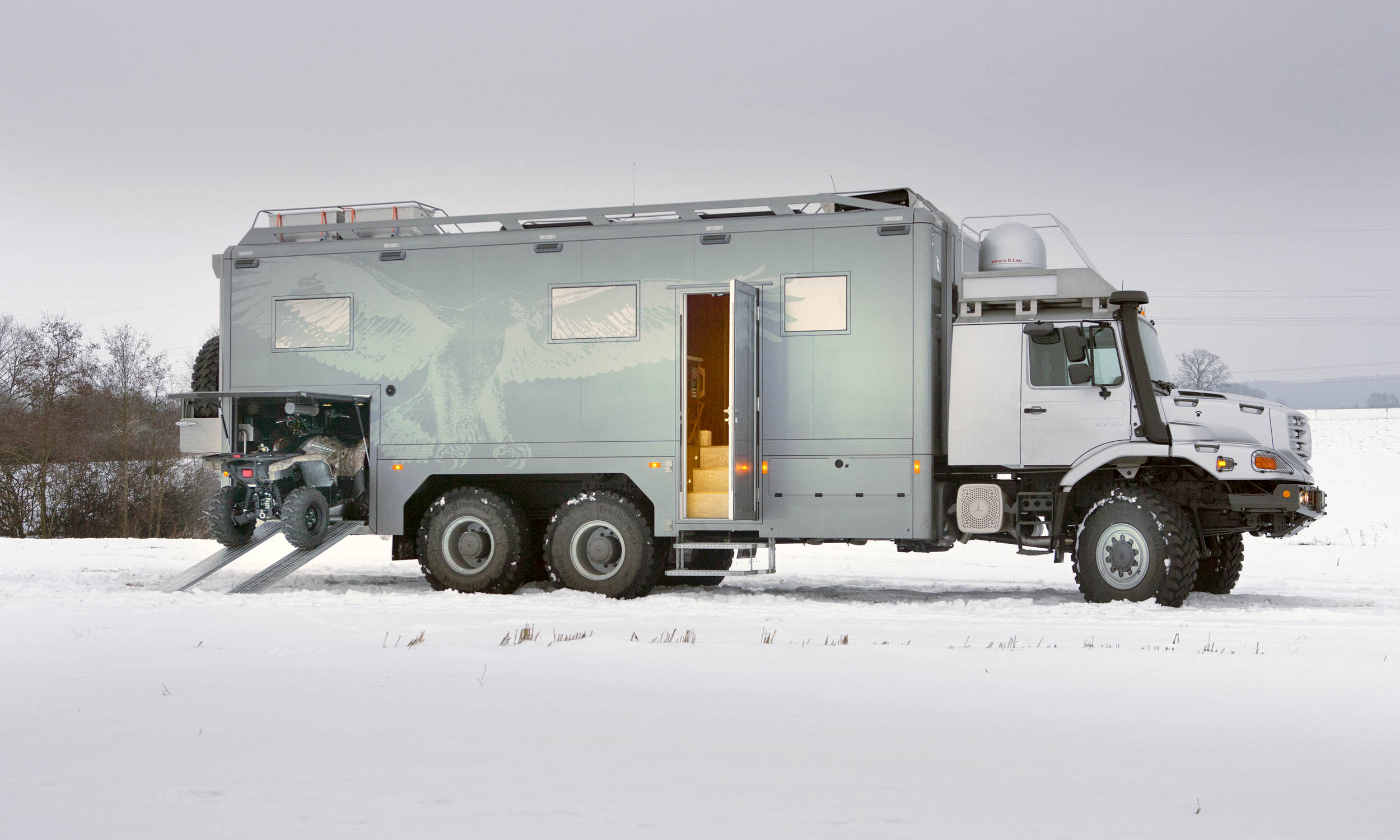 Mercedes-Benz Zetros 6×6 Expedition Vehicle
Estimated price: $1,000,000
This heavy-duty off-road luxury RV was specifically designed for hunting excursions in Mongolia — that alone puts this vehicle in the extreme category. The Zetros 6×6 all-terrain truck can handle a payload of up to 16 tons in the most difficult off-road conditions, making it the perfect platform for an extreme expedition camper. The M-B Zetros even has a rear compartment for an ATV. 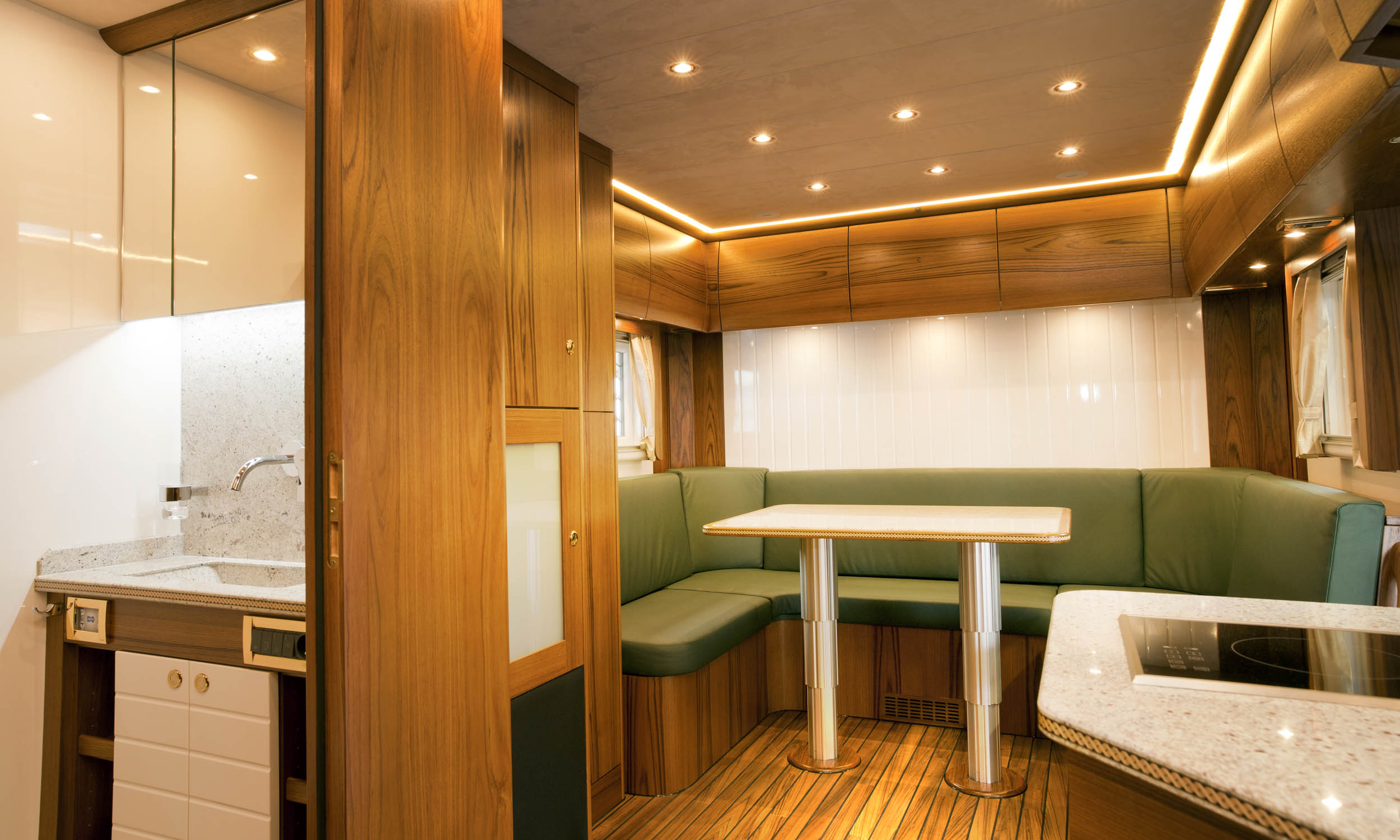 Mercedes-Benz Zetros 6×6 Expedition Vehicle
The interior of the M-B Zetros features a bedroom at the rear and a leather seating area in front for up to six people. The bathroom boasts a marble floor with underfloor heating. Not only does the Zetros have a fully equipped galley, twin gas burners on the exterior permit the occasional fireside cookout. The bedroom and seating areas are separated by a wall containing twin integrated flat-screen TV monitors — one facing the bedroom and one facing the seating area. Also included are a satellite dish, air-conditioning, a DVD/CD player, an MP3 player and a high-end Bose sound system. An onboard diesel generator and very large fuel tanks mean you can stay off the grid for an extended period of time. 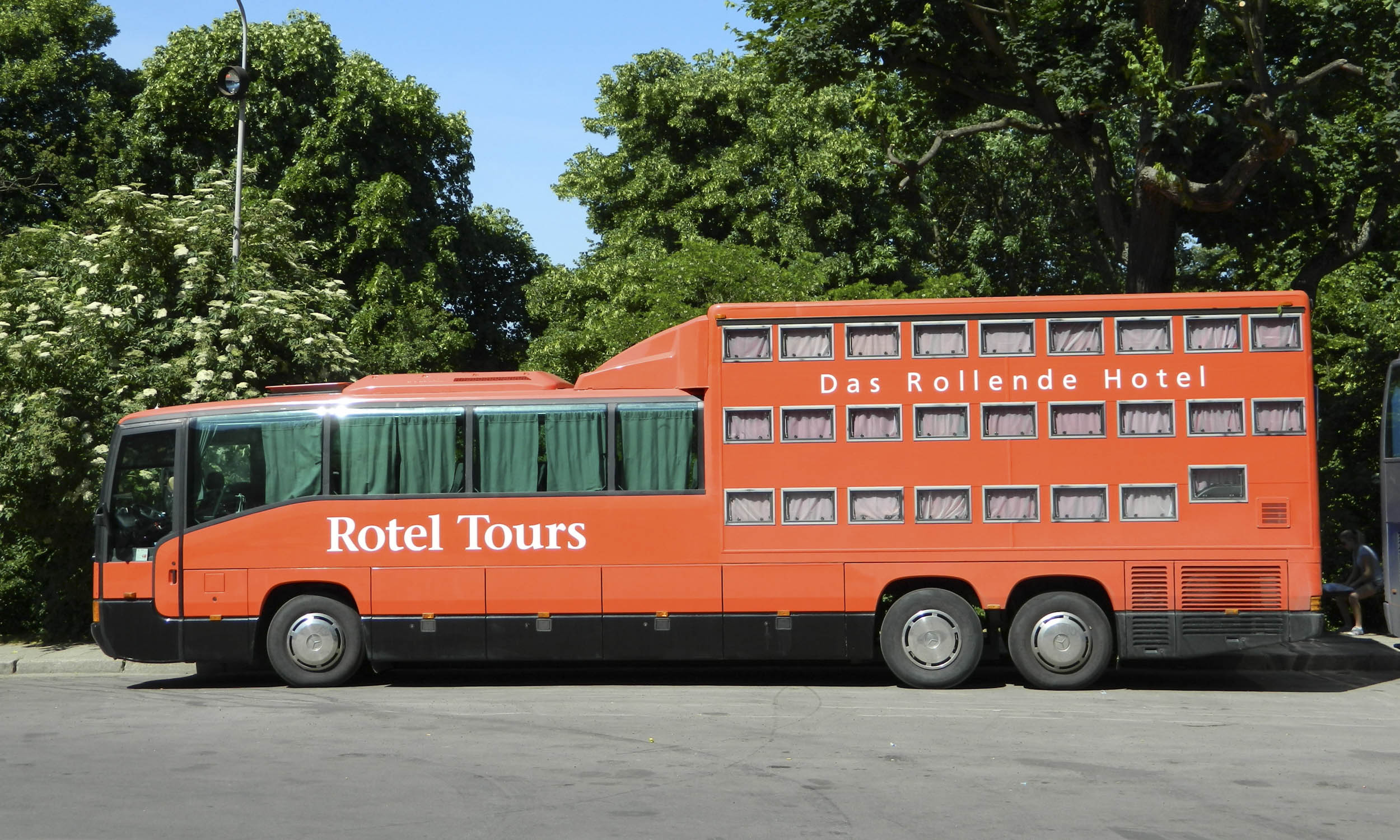 Rotel
Estimated price: Varies depending on tour length and destination
Extreme doesn’t always mean luxurious — in fact, it could be argued that this RV is at the opposite end of the spectrum. Operated by a German touring company, the Rotel is basically a rolling hotel (hence the name) that allows you to tour the world, but you have to share. Company tours take passengers to a range of destinations around the world including Russia, America, England, Iceland and many more. The advantage for this type of touring lies in the security of knowing where you will be sleeping each night — on a bus with 20 to 30 of your new friends. 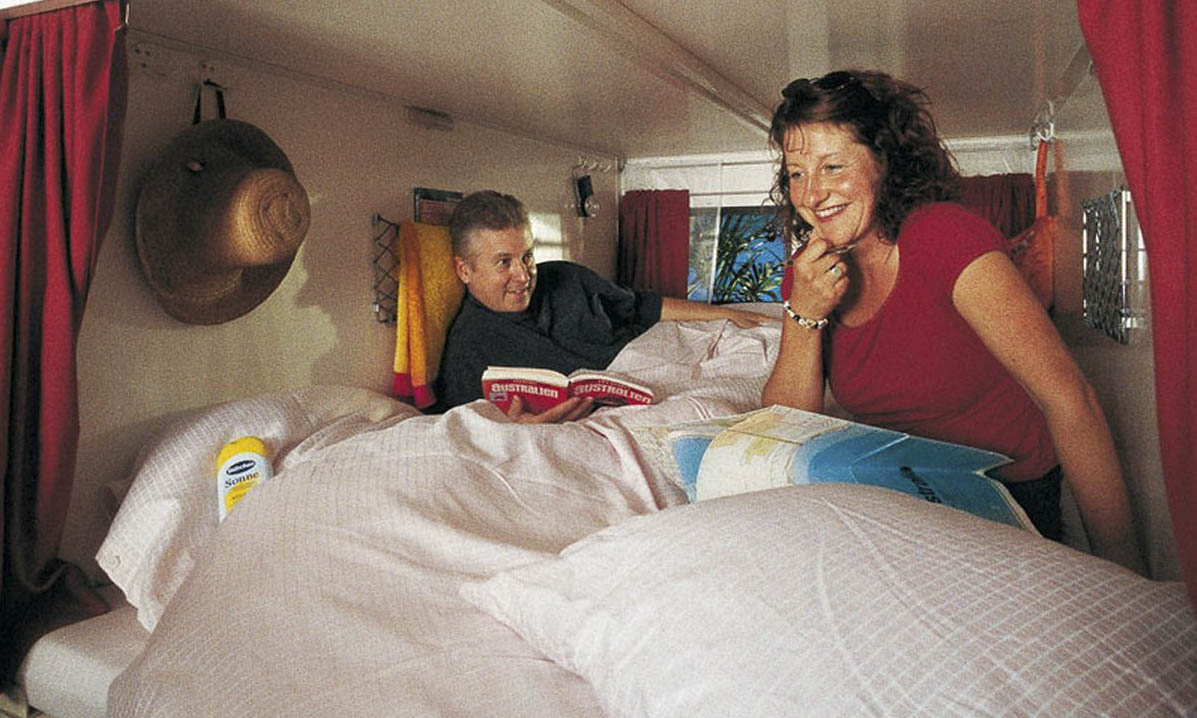 Rotel
On the Rotel tour bus, you ride in a passenger seat during the day and sleep in a small one- or two-person capsule at night, each with its own window. A large onboard kitchen serves breakfast and dinner; lunch is usually experienced at local restaurants during your journey. You’ll have access to your luggage every three days. Not exactly living in the lap of luxury, but certainly an interesting way of seeing the world. 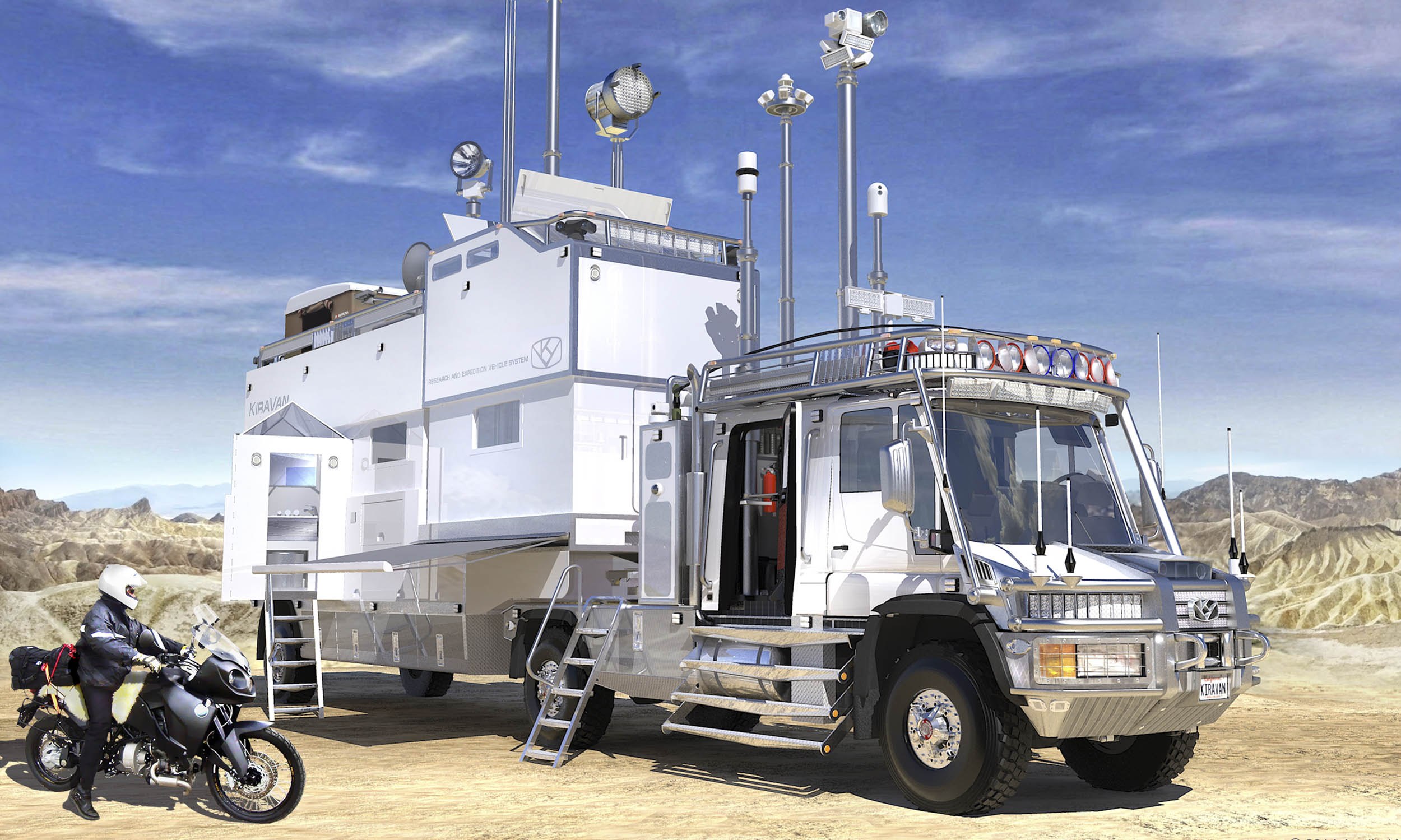 KiraVan Expedition System
Estimated price: $2,000,000-plus
Designed to take a family (or crew) of three wherever they might want to go, the KiraVan Expedition System is a Mercedes-Benz Unimog tractor combined with a trailer of Swiss Army versatility. The cab unit has been stretched and reinforced to accommodate a 4-door composite body, a powerful diesel powerplant and an off-road articulating 5th-wheel hitch. The trailer is 52 feet long, including storage for a unique turbodiesel motorbike that gets 100 mpg. The KiraVan carries enough fuel to travel up to 2,000 miles and contains enough provisions for three to live up to three weeks on their own. This KiraVan has two generators, solar panels and battery packs, so plentiful power is always on hand to keep the HVAC operating smoothly — the cabin can be kept comfortable in outside temps ranging from -30 to +130 degrees Fahrenheit. 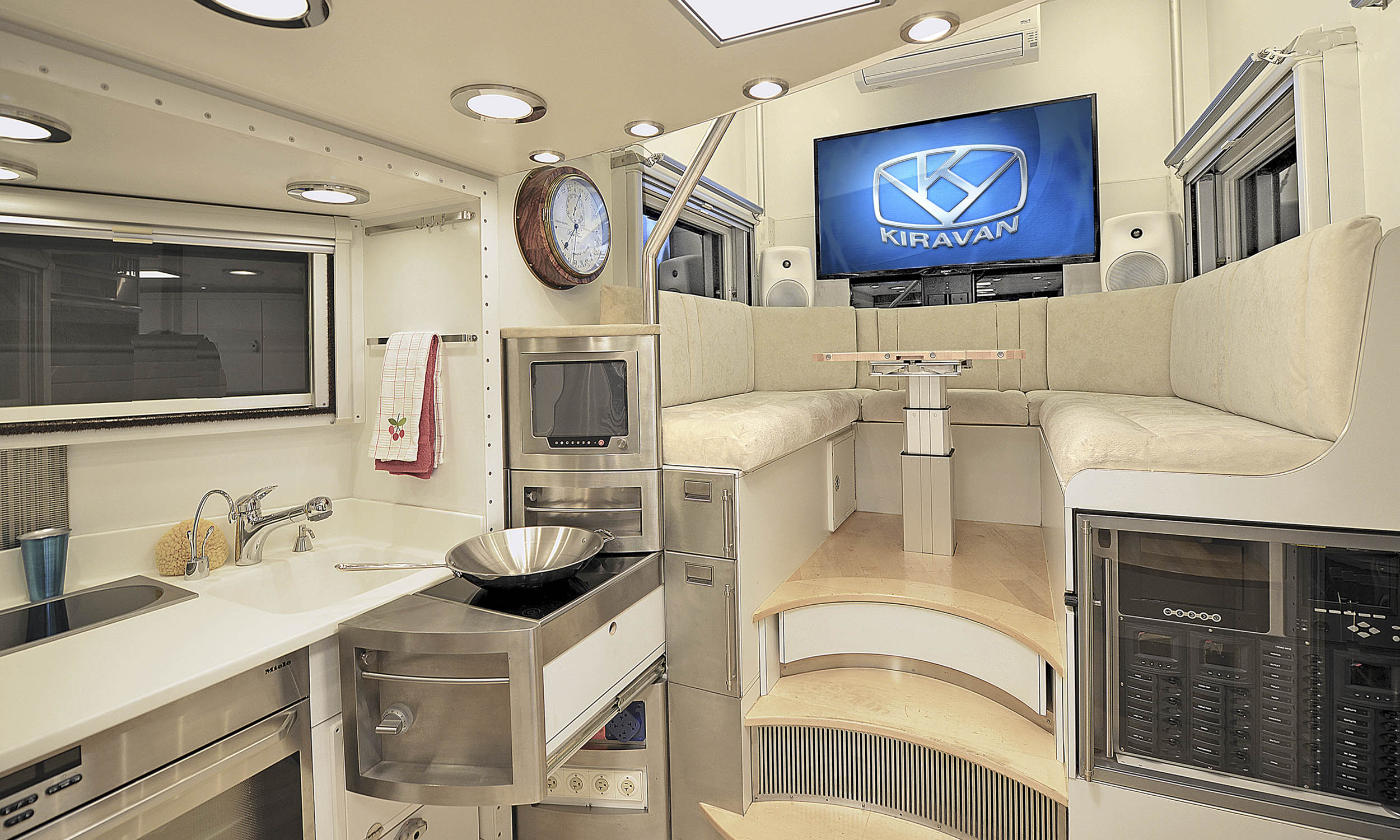 KiraVan Expedition System
The KiraVan is always connected with wireless satellite broadband internet, as well as a global communications system that can be used from almost anywhere in the world. The comfortable interior has wood flooring, a full kitchen, a 4K HDTV with surround sound, a dining area, and an office. The main sleeping area is on the upper level, and the bathroom includes a shower with a multi-faceted skylight, and a toilet that incinerates all waste into a non-toxic, sterile powder. 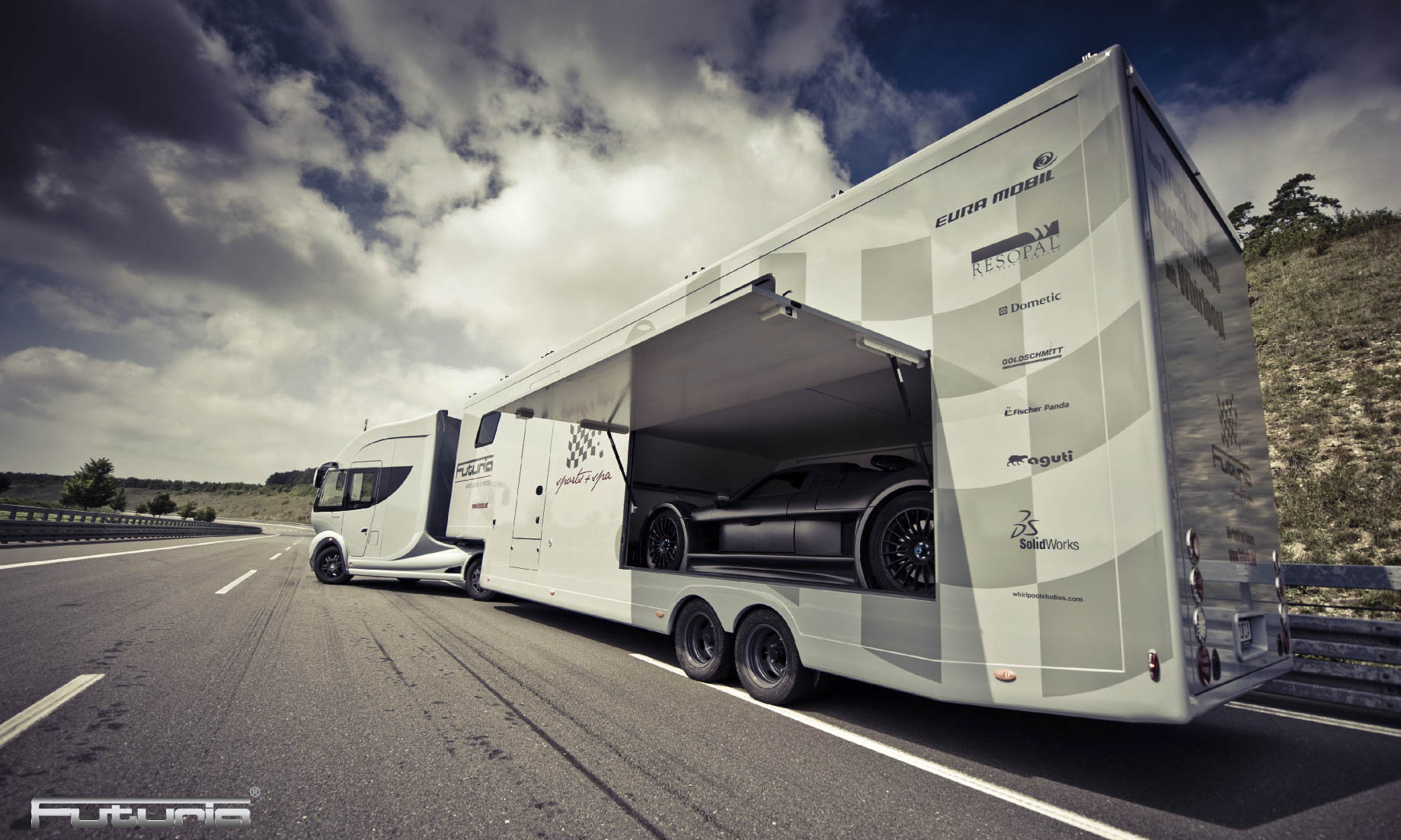 Futuria Sports+Spa
Estimated Price: $750,000
Although it looks a bit like a futuristic semi-truck, this German-made motorhome is much more than just a truck. Inside that long trailer is everything you might need for a getaway weekend — or possibly one wild party. Inside are two bedrooms, a full kitchen and a living room with a couch large enough for ten people. A built-in generator keeps two air conditioners running, as well as a DVD player and an integrated Miele coffeemaker. 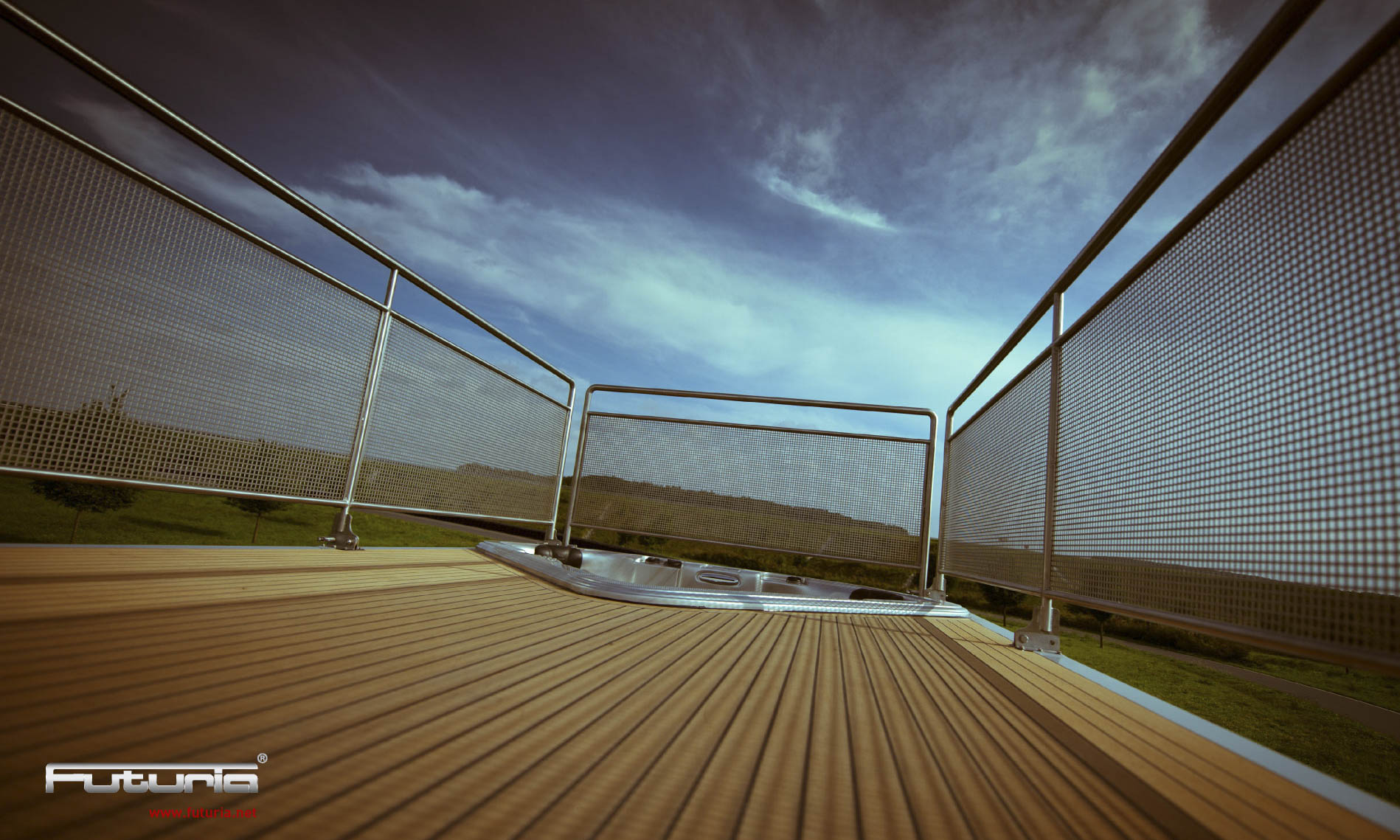 Futuria Sports+Spa
What really stands out about the Sports+Spa is the upstairs terrace. With a teakwood deck and high-quality steel rails, there’s plenty of space to throw a raucous barbecue with an excellent view. A large Jacuzzi with illuminated jets and a waterfall effect complete the experience. And when you’re ready to head off to the next party, just drive your sports car out of the integrated garage and you’re on your way. 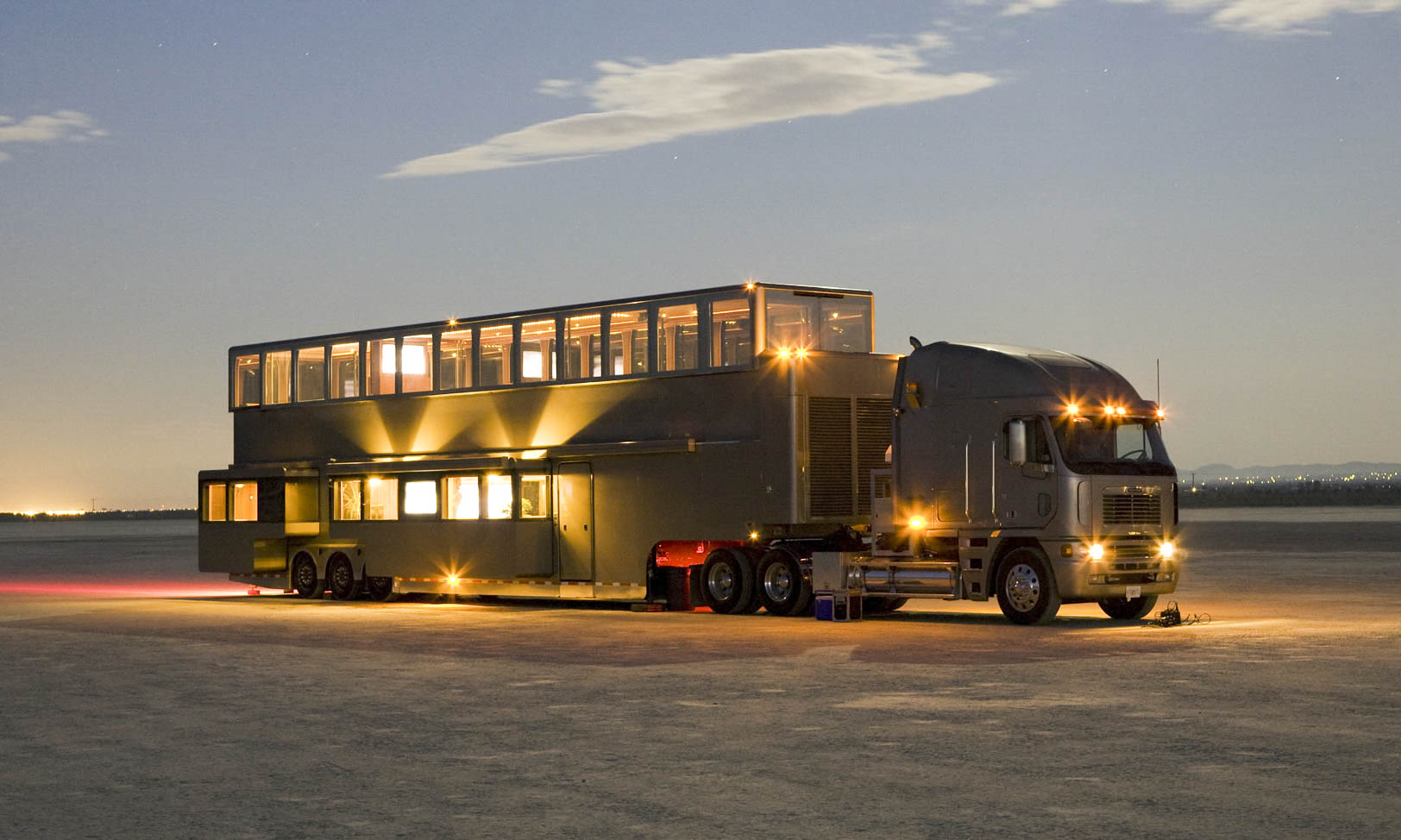 Anderson Mobile Estates
Estimated Price: $2,000,000-plus
If you want the ultimate mobile home, it might as well be built on the largest mobile platform: a full-size tractor trailer. That’s what Anderson Mobile Estates does, and the results are quite stunning. Often available to Hollywood stars for use on movie sets, these land yachts have multiple slide-out compartments and are typically two stories (the upper floor emerges via electric motors in about 30 seconds). An Anderson Mobile Estate is about 75 feet long, weighs around 40 tons and offers as much as 1,200 square feet of living space. These extreme RVs have been used by Hollywood A-listers such as Will Smith, Ashton Kutcher, Vin Diesel and Robert De Niro. 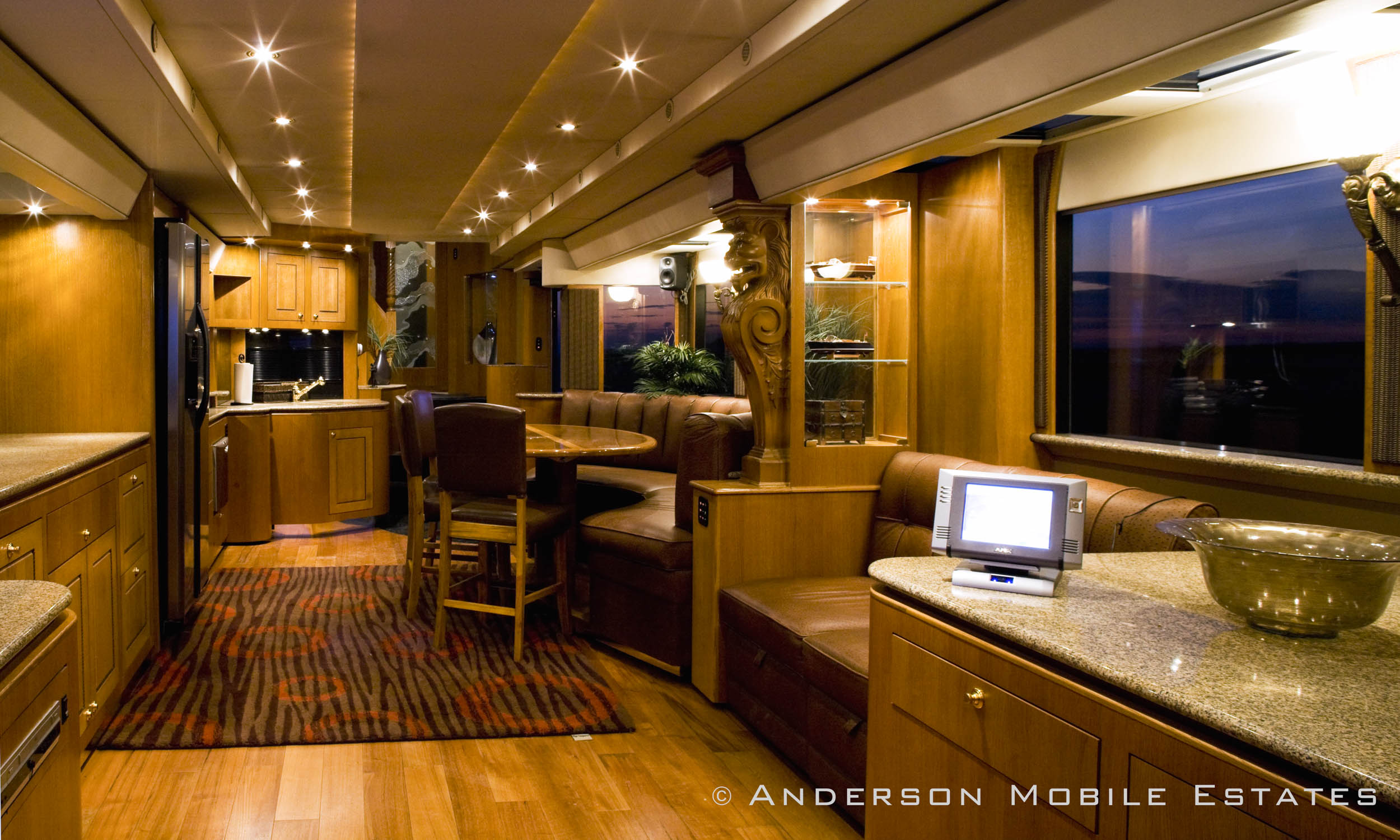 Anderson Mobile Estates
These luxurious Anderson mobile mansions are entirely custom made. The Heat was owned by Will Smith and features a master bedroom, a full kitchen, several guest rooms, multiple bathrooms with showers, flat-screen TVs throughout and lounge space for up to 30 people. Simon Cowell’s Producer’s Pad boasts two all-granite bathrooms, a 100-inch TV screen with cinema-style seating, a 14-foot kitchen with marble floors and a Sub-Zero refrigerator. Other customizations have included complete recording and broadcast studios. 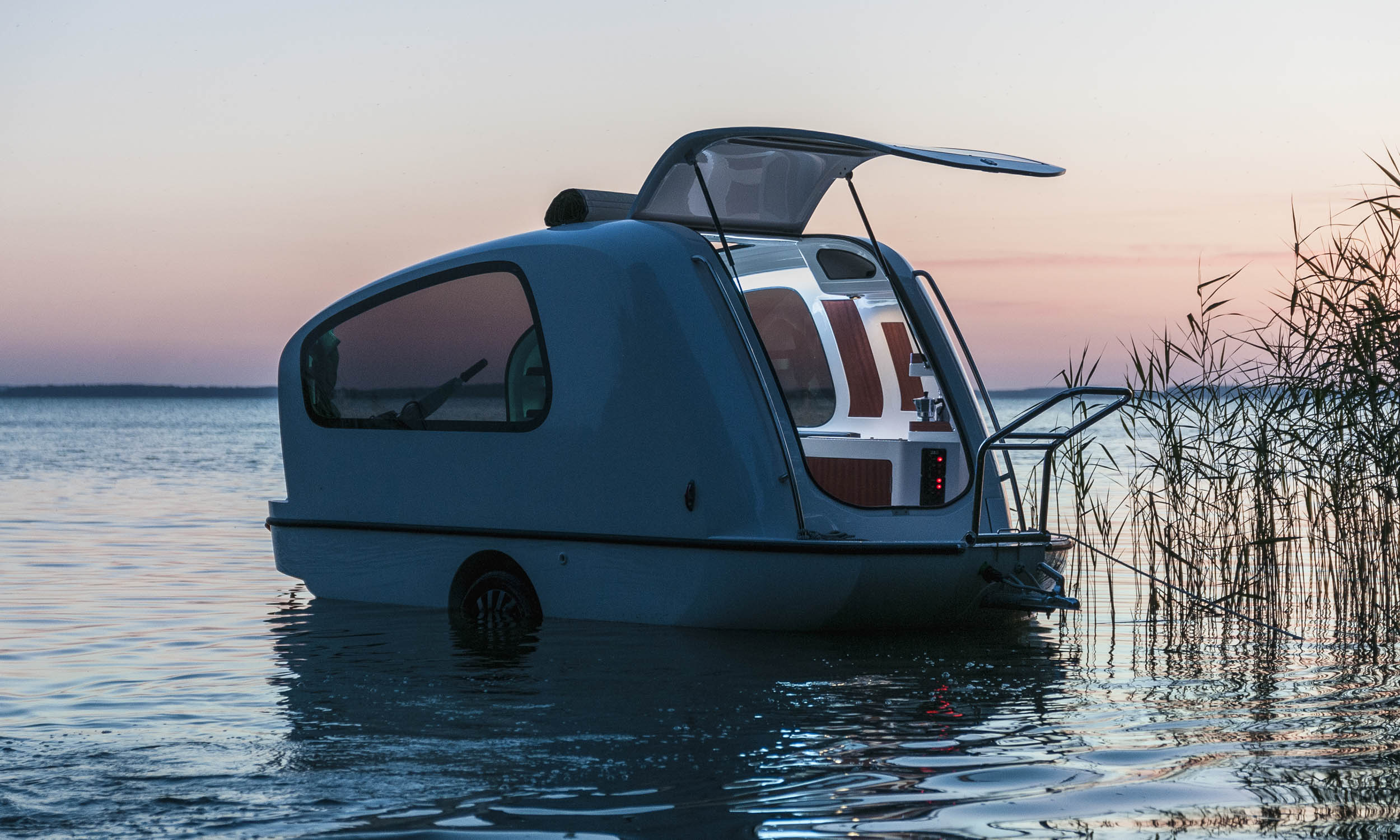 Sealander
Estimated Price: $20,000
Unlike the massive and expensive Terra Wind, the Sealander is an extremely basic amphibious vehicle that can function as both a camper and a boat. With a gross vehicle weight rating of around 1,200 pounds, the Sealander can be pulled by just about any standard car. The compact contraption measures just over 13 feet long, and the best part about it is that you can back it into the water and launch it like a boat. Attach the outboard motor, open the roof and you’re ready for a relaxing day on the water. 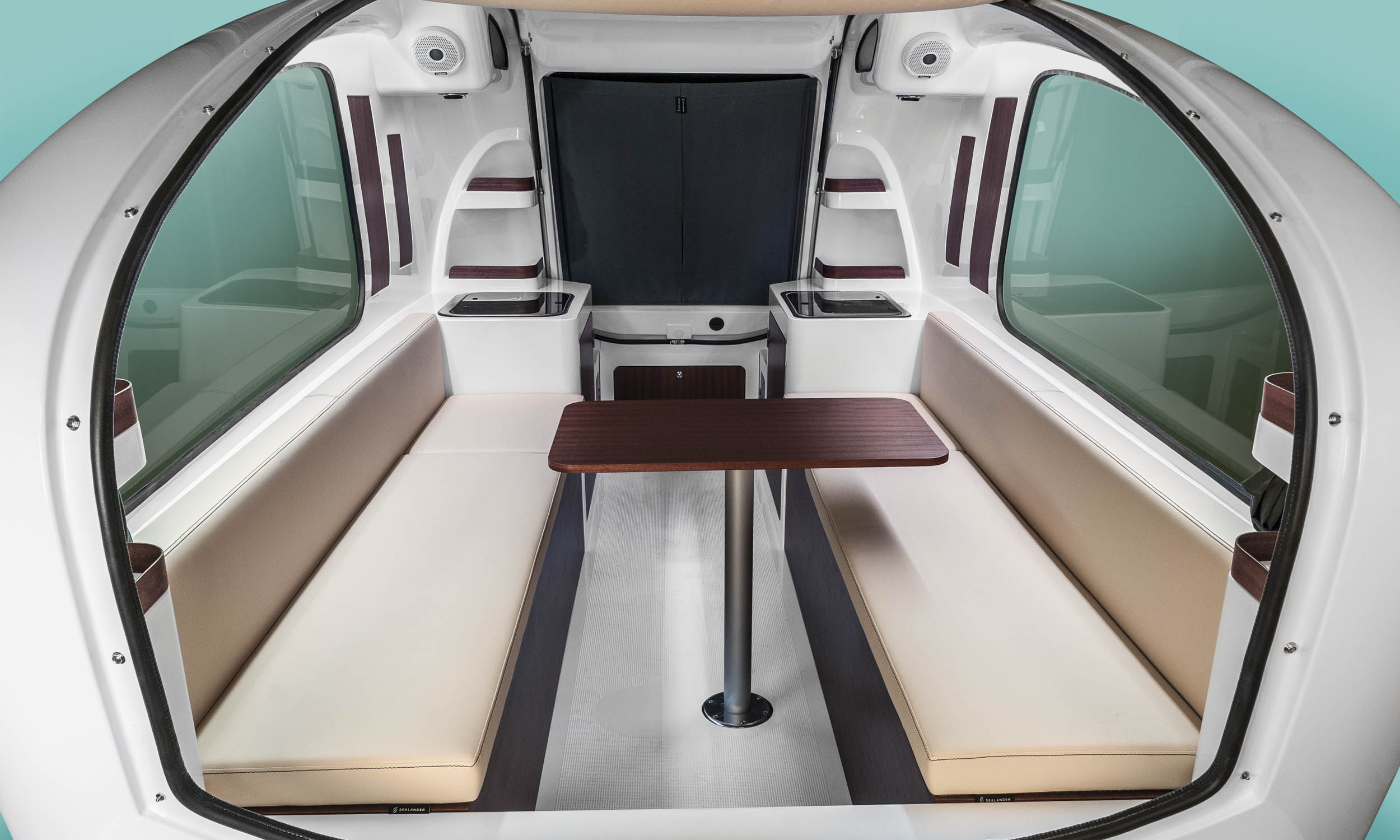 Sealander
Inside, the Sealander is tastefully appointed with stainless steel, natural wood and leather. There’s seating for six around a table, or the table can be folded down to create a spacious bed. The Sealander can be equipped with a toilet, a barbecue, a gas stove, a sink with fresh and waste water tanks, and a ladder for climbing in and out of the water. Produced in Germany, this unique trailer is the perfect solution for those who like both camping and boating.