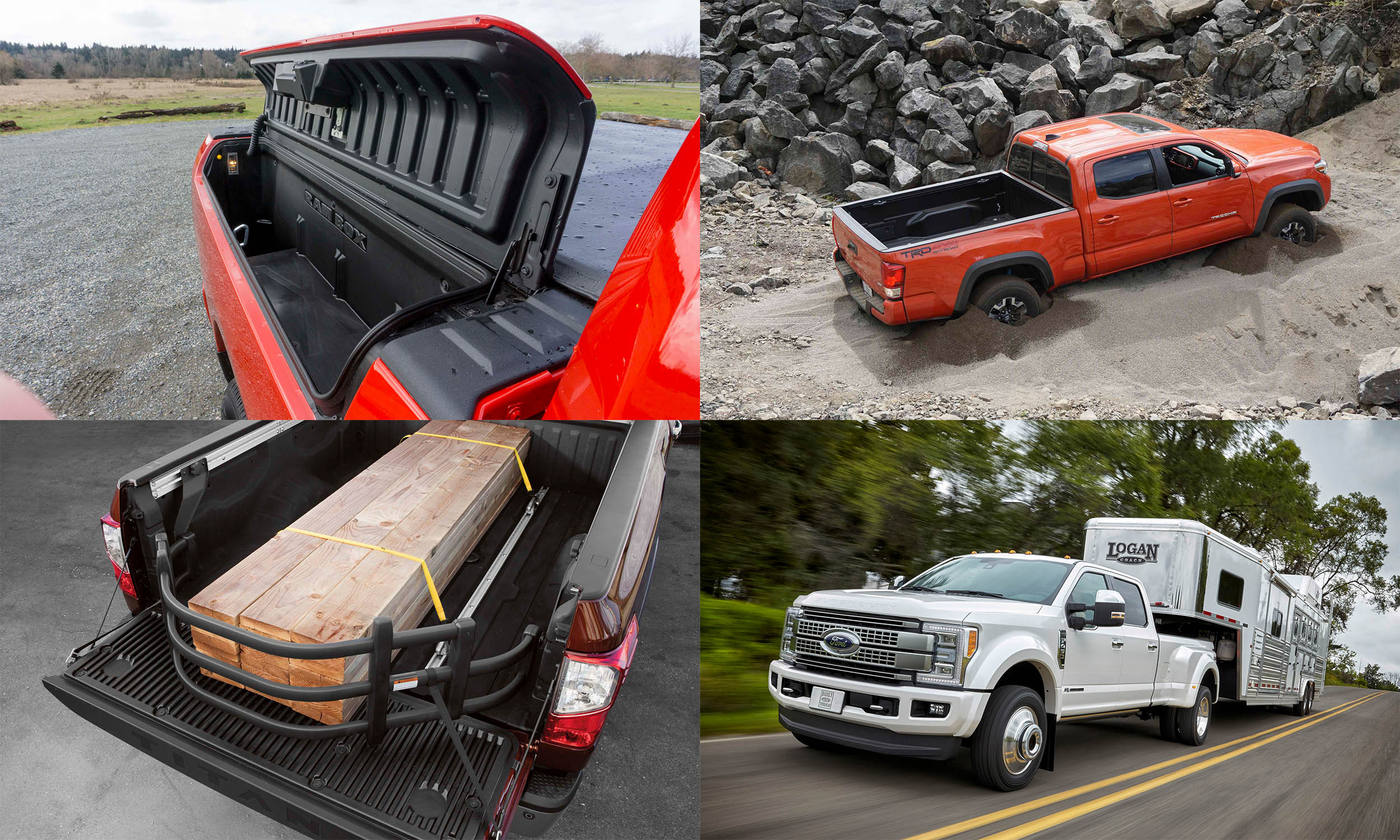 Coolest Features
Picking out a new car or truck can be tough. The quality of mechanicals and materials used today has achieved an equilibrium, so automakers rely on design and creative innovation to distance themselves from one another — edgy bodywork and clever features are the order of the day. Since pickup trucks use cargo capacity and towing prowess as their trump cards, it’s no surprise that manufacturers have focused their energies in these areas. The result has been an unprecedented onslaught of thoughtful features that add to the versatility, value, and convenience of the pickup. What follows are the most inspired truck features, so read on and then hit the showrooms fully informed to get the most bang for your buck. 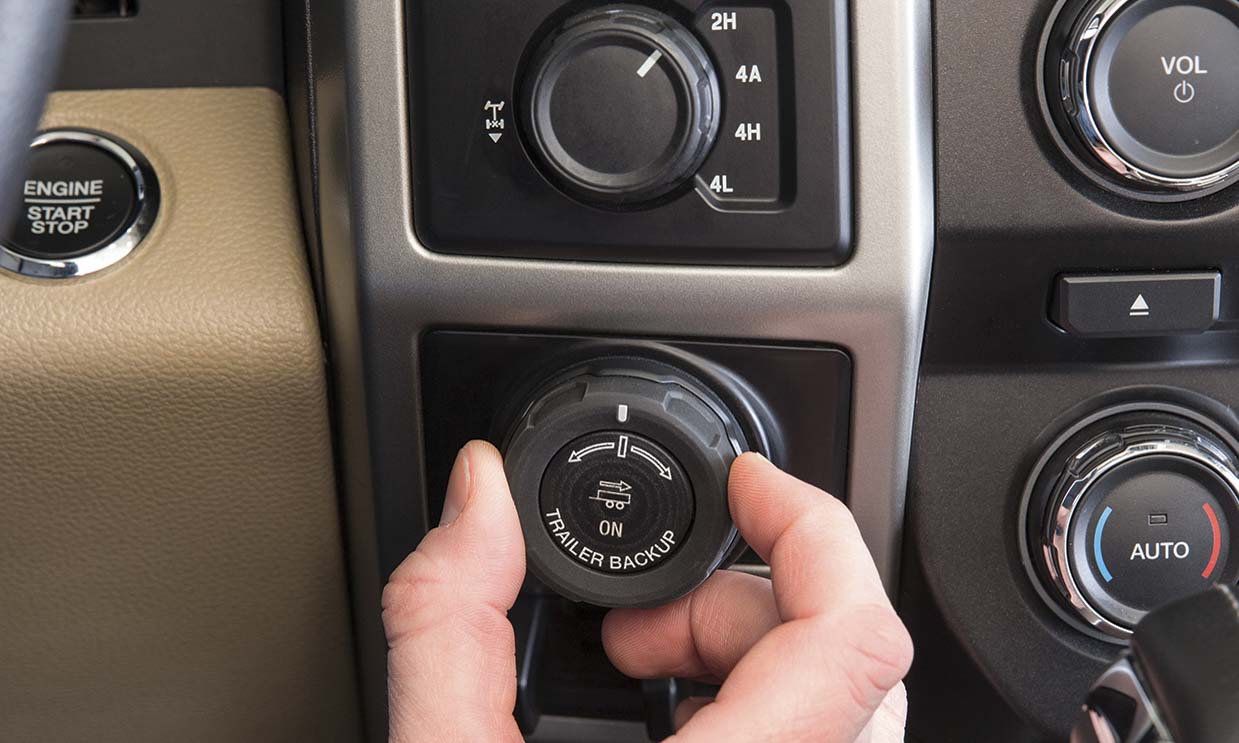 Ford F-Series Pro Backup Trailer Assist
A rite of passage for truckers from coast to coast, the ability to reverse a trailer into a tight parking spot or down a crowded boat launch ramp has long separated the pros from the amateurs. The chore has now gone digital with Ford’s Pro Backup Trailer Assist system. The F-Series driver uses a dash-mounted knob to point, or steer, the trailer in the right direction using the truck’s 360-degree camera system. Pro Backup Trailer Assist handles all the opposite-lock steering, creeping acceleration and braking. You’ll seem like a rock star to dockside onlookers and true truckers will want autographs. 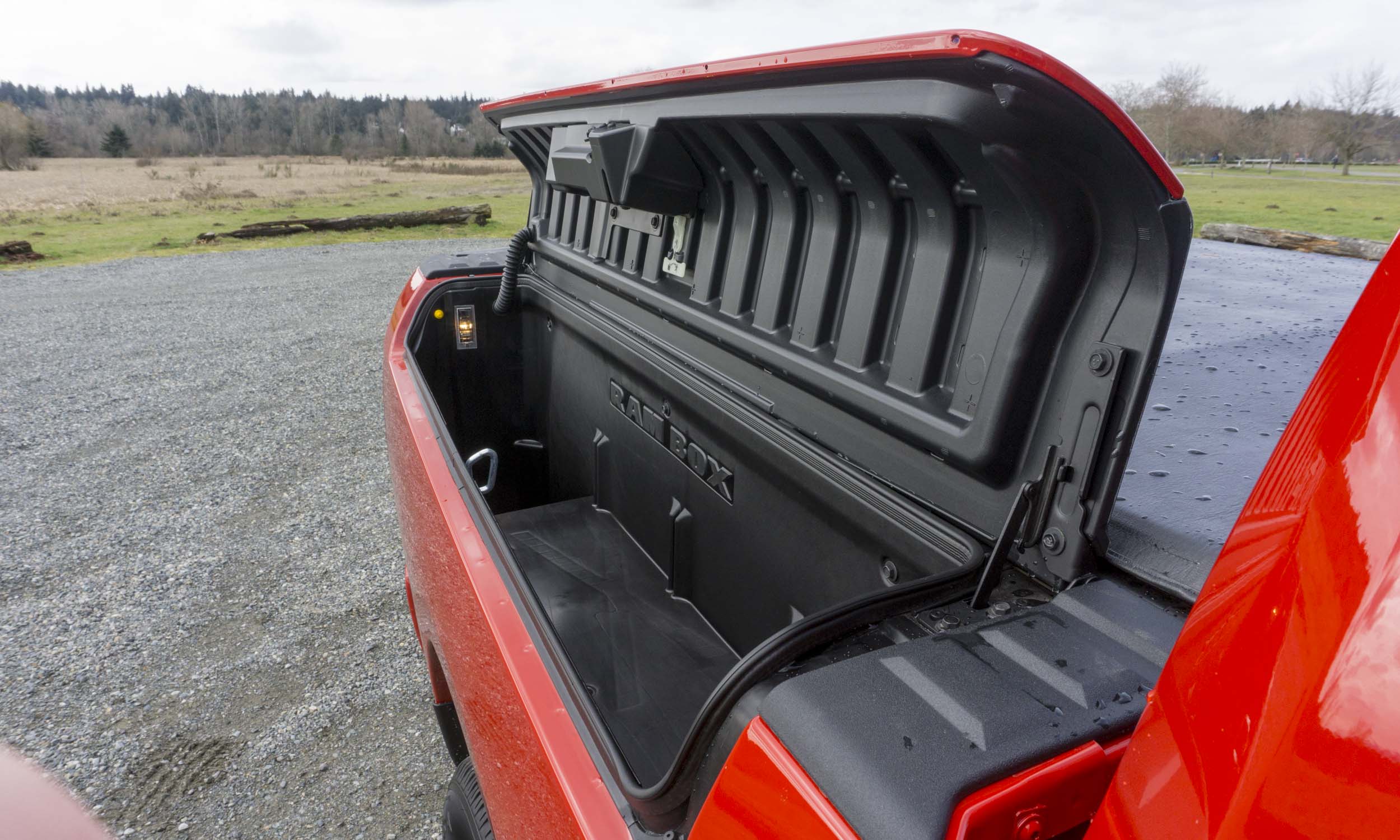 RamBox Cargo Management System
This ditty from the Ram Fam is a big storage bin housed within the inner sheet metal of the bed side. It’s positioned above the rear tire and accessible from outside the truck via a door incorporated into the upper bed rails. Smelly work cloths, valuable tools, refreshing chilled drinks, and tow straps and emergency gear are just some of the items you can keep handy but under lock and key in a RamBox. It features interior lighting and is fitted with a drainage system for when it’s used as a cooler. But there is a compromise to consider. The boxes can take up cargo room . . . how much depends on the truck’s bed size and what you intend to haul. We suggest test driving one in person, since online vehicle configurators can’t accurately relay this kind of information. 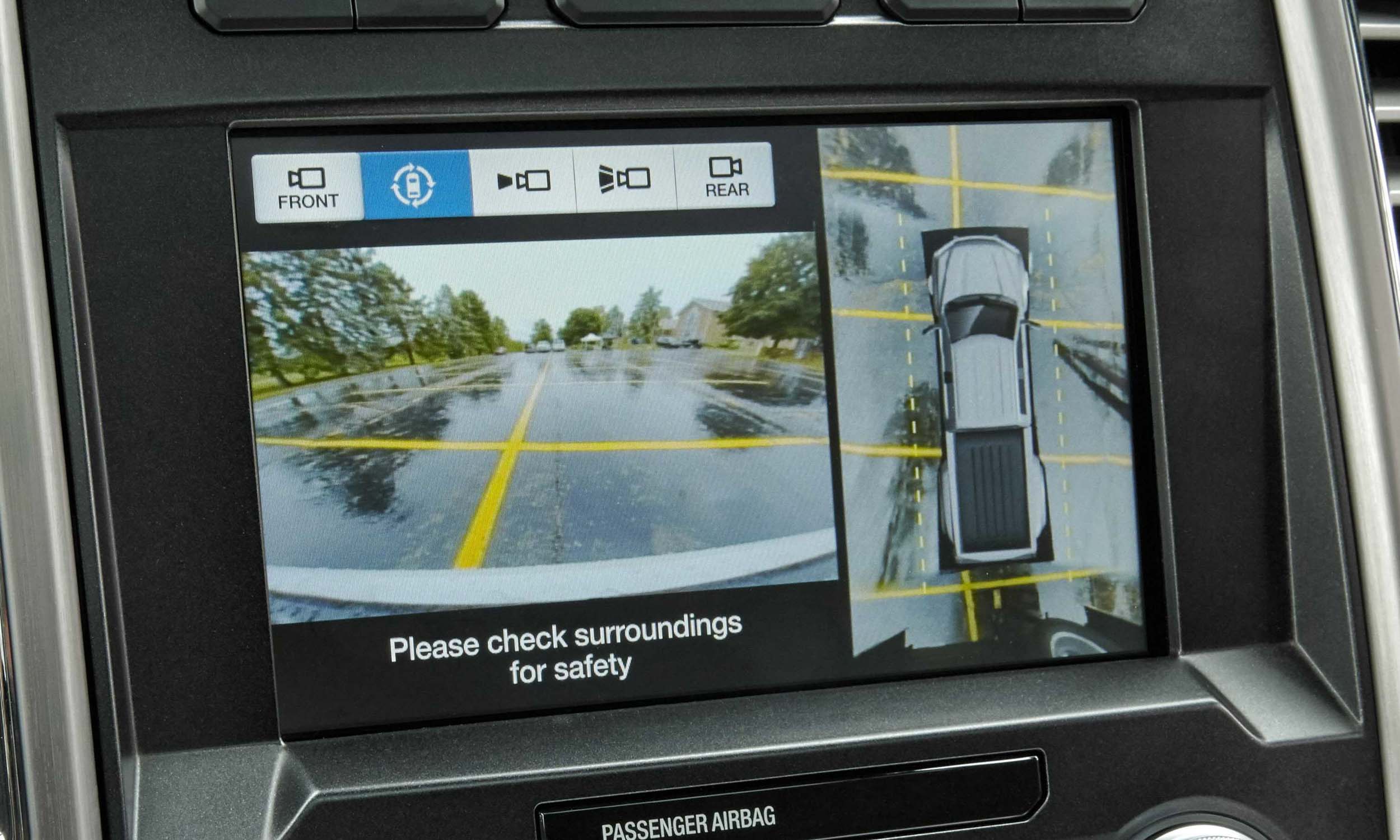 Ford F-150 Bird’s Eye View
Today’s camera systems have gone way beyond a “peek-a-boo” look from the tailgate. Ford has taken it to the next level with a system that features a split view on the F-150’s center dash. The screen displays a more traditional backup camera with color-coded gridlines, as well as a pictorial representation of a 360-degree area around the truck that reveals obstacles large and small. Your viewpoint looks down at the truck and coverage extends about seven feet from the vehicle. 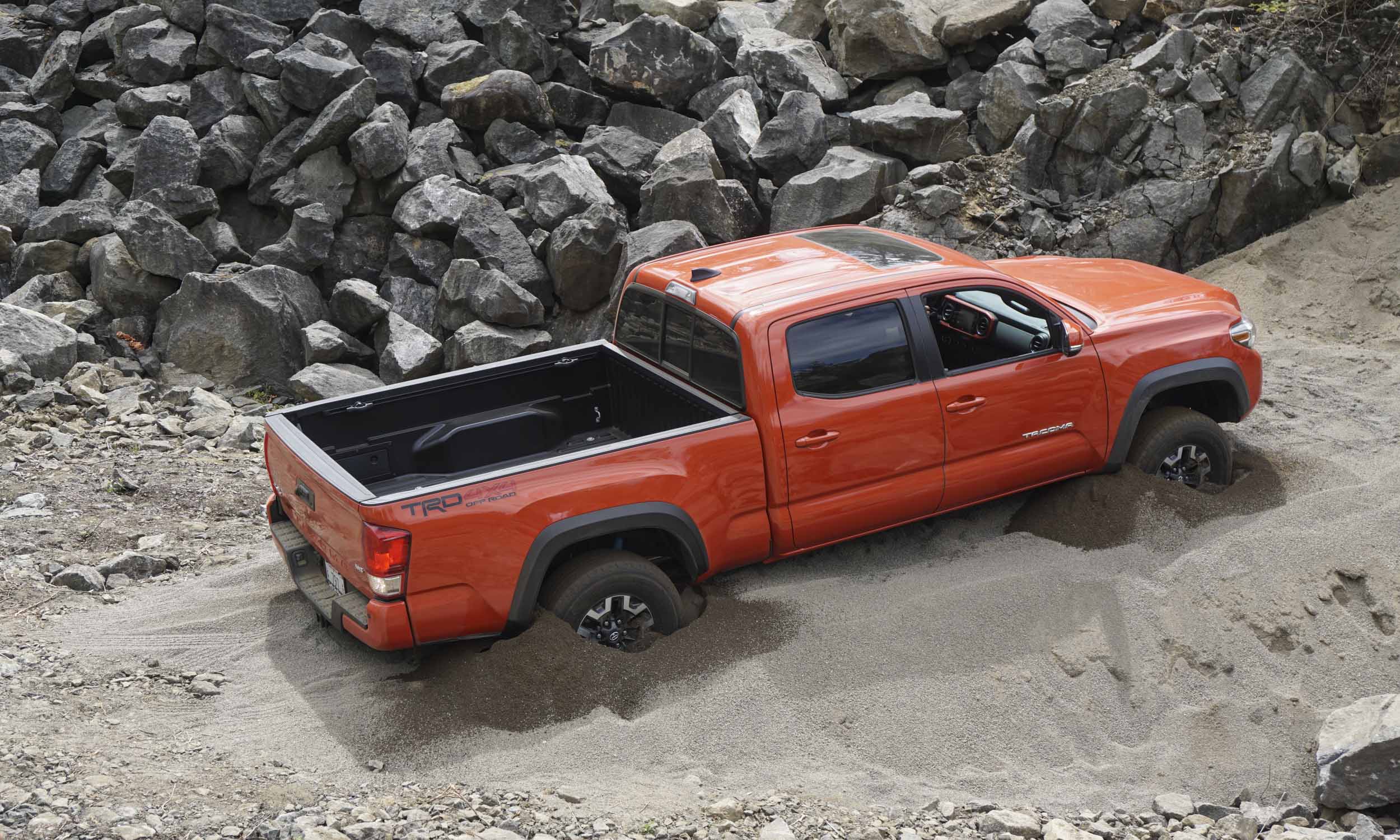 Toyota Tacoma Crawl Control
Some call this sand mode for short. The system conquers sandy inclines, deep mud, snow drifts, or for straight-up rock crawling. Utilizing stability control feedback, wheel speeds and braking sensors, this system takes over acceleration and braking on an individual-wheel basis so all you do is steer. Yep, you take your feet off the pedals and steer. A computer will detect driveline slippage and even keep the vehicle from digging itself in a rut, as well as limit speed to 5 mph. Toyota introduced Crawl Control in 2008. 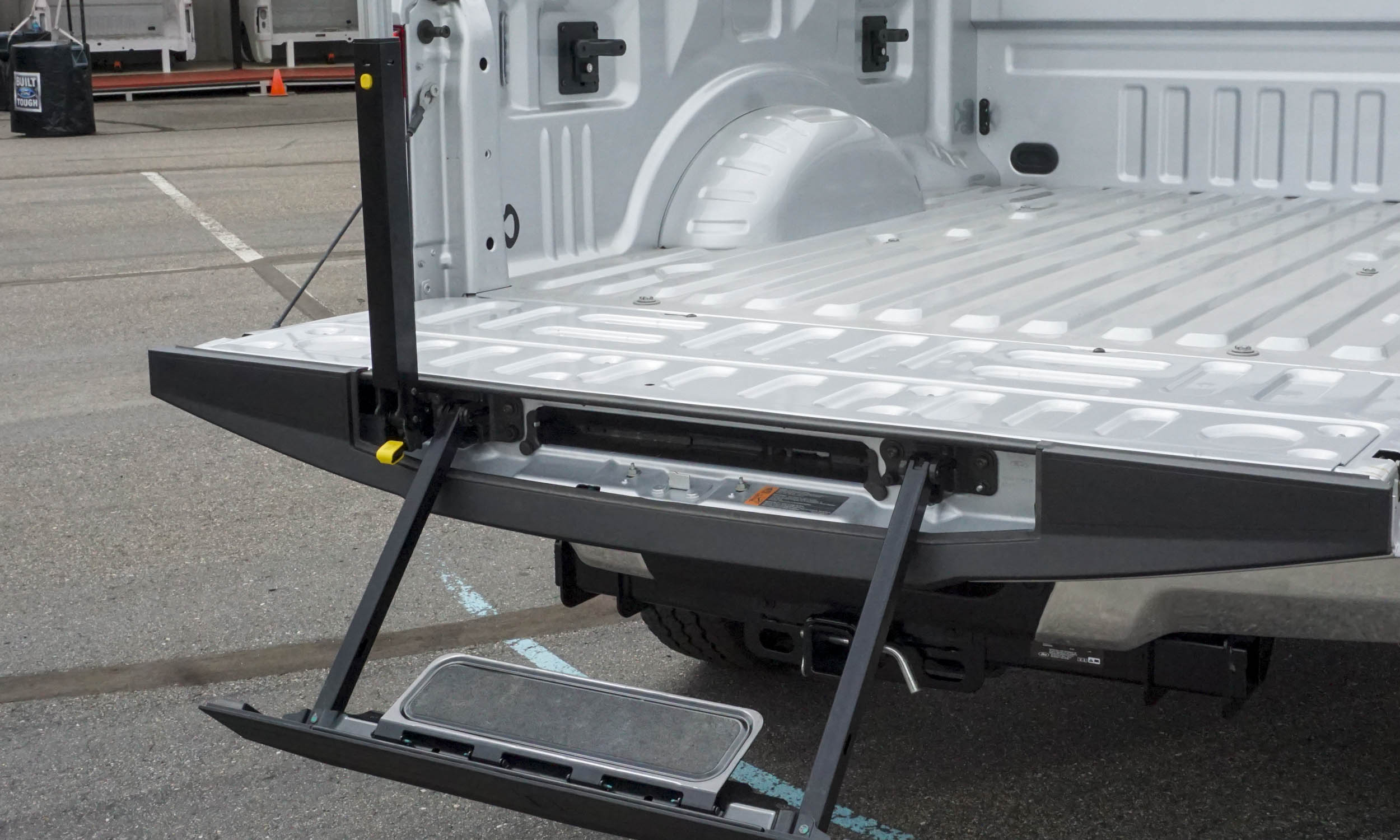 Ford F-Series Integrated Tailgate Step
Never again suffer the pants-splitting yoga moves needed to climb into the bed of a full-size pickup. Optional on the entire F-Series line, Ford’s class-exclusive Integrated Tailgate Step is self-contained within the tailgate, so there is no interference with cargo loading at the hardware store, tailgating at the game, or using the inner tailgate as a work surface on the jobsite. To access to the truck bed via this feature, a quick tug on a grab handle deploys the convenient step in a smooth, controlled motion. 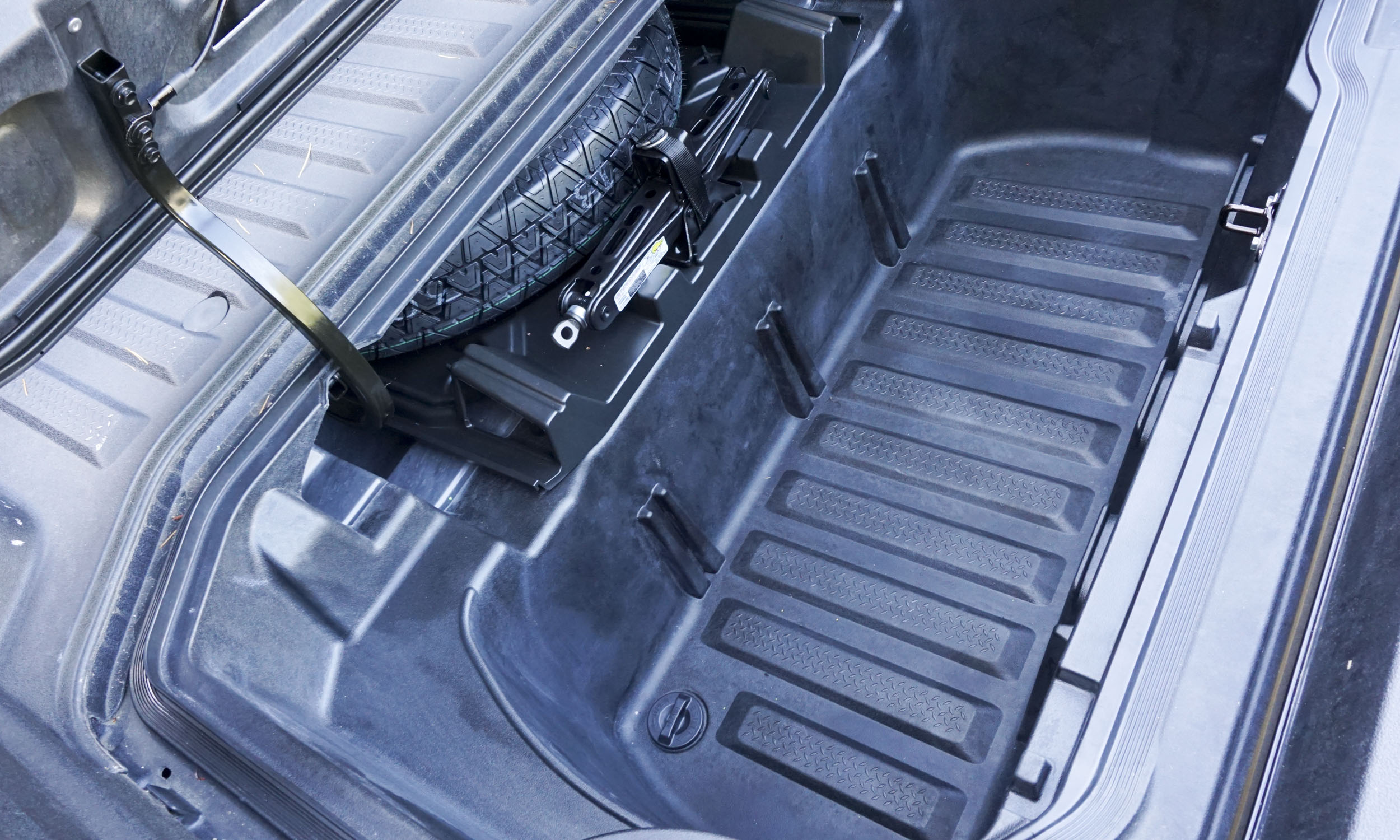 Honda Ridgeline In-Bed Trunk
The originator of truck bed storage hijinks, the Ridgeline is a new-for-2017 proposition. In fact, Honda’s pickup truck has been off the market for two years. Its In-Bed Trunk is located in the floor of the truck bed so it doesn’t take up any lateral storage area, and some will say it is more secure than a RamBox, especially if a tonneau cover is part of the mix. Honda has added drainage for cooler duty, and the company offers many cargo dividers and other accessories for optimizing the storage space of the In-Bed Trunk. 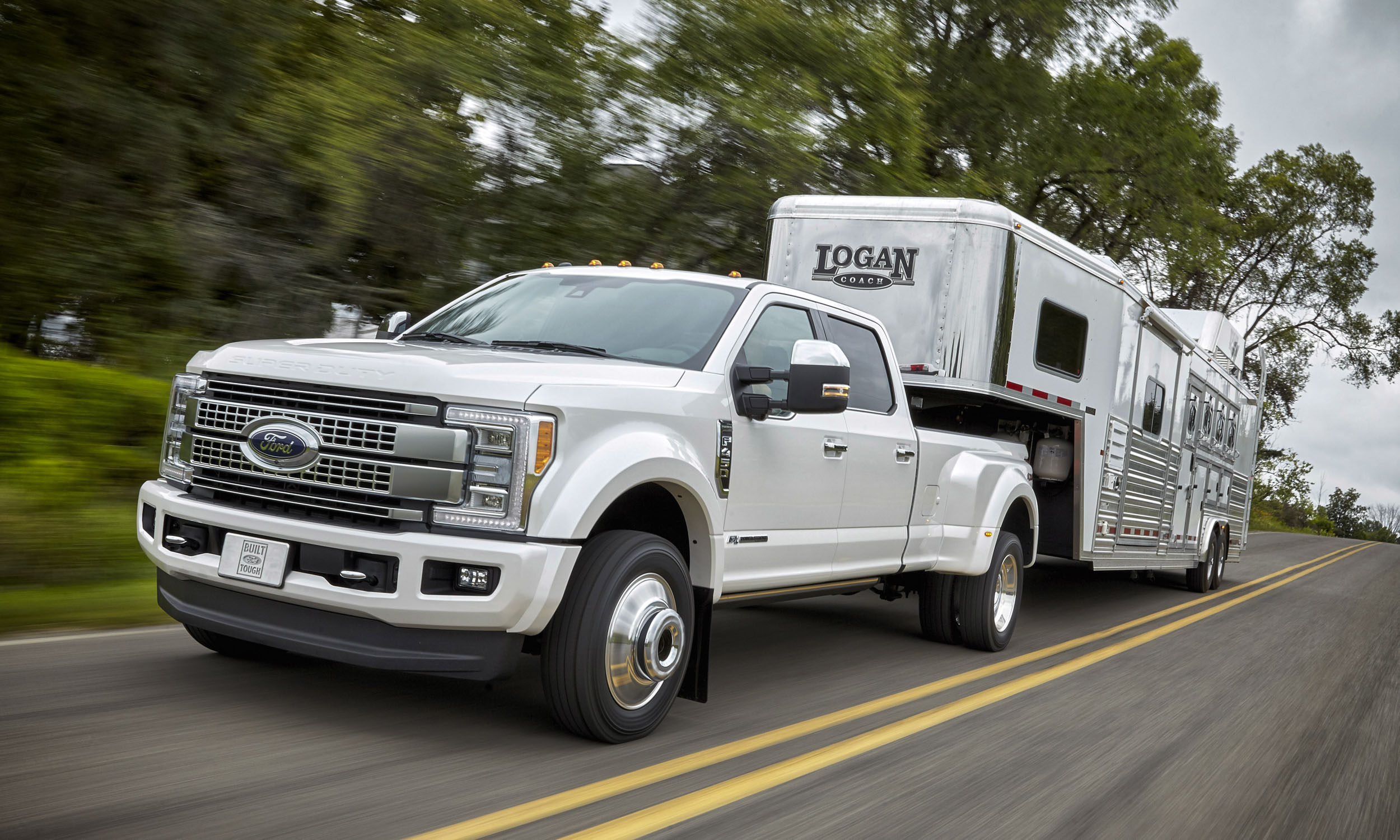 Ford F-Series Super Duty Adaptive Cruise Control
Ford’s Adaptive Cruise Control uses radar to sense the distance between vehicles ahead and their speed, and slows the truck to maintain a preset distance. The innovative aspect of this system is how it works while towing. With the push of a button the system uses integrated engine braking from the Super Duty’s 6.7-liter Power Stroke diesel to slow the truck and trailer and maintain speed on descents where stability is crucial. This technology is optional fare on Lariat, King Ranch, and Platinum Super Duty pickups, including the super-sized Ford F-450 Super Duty. 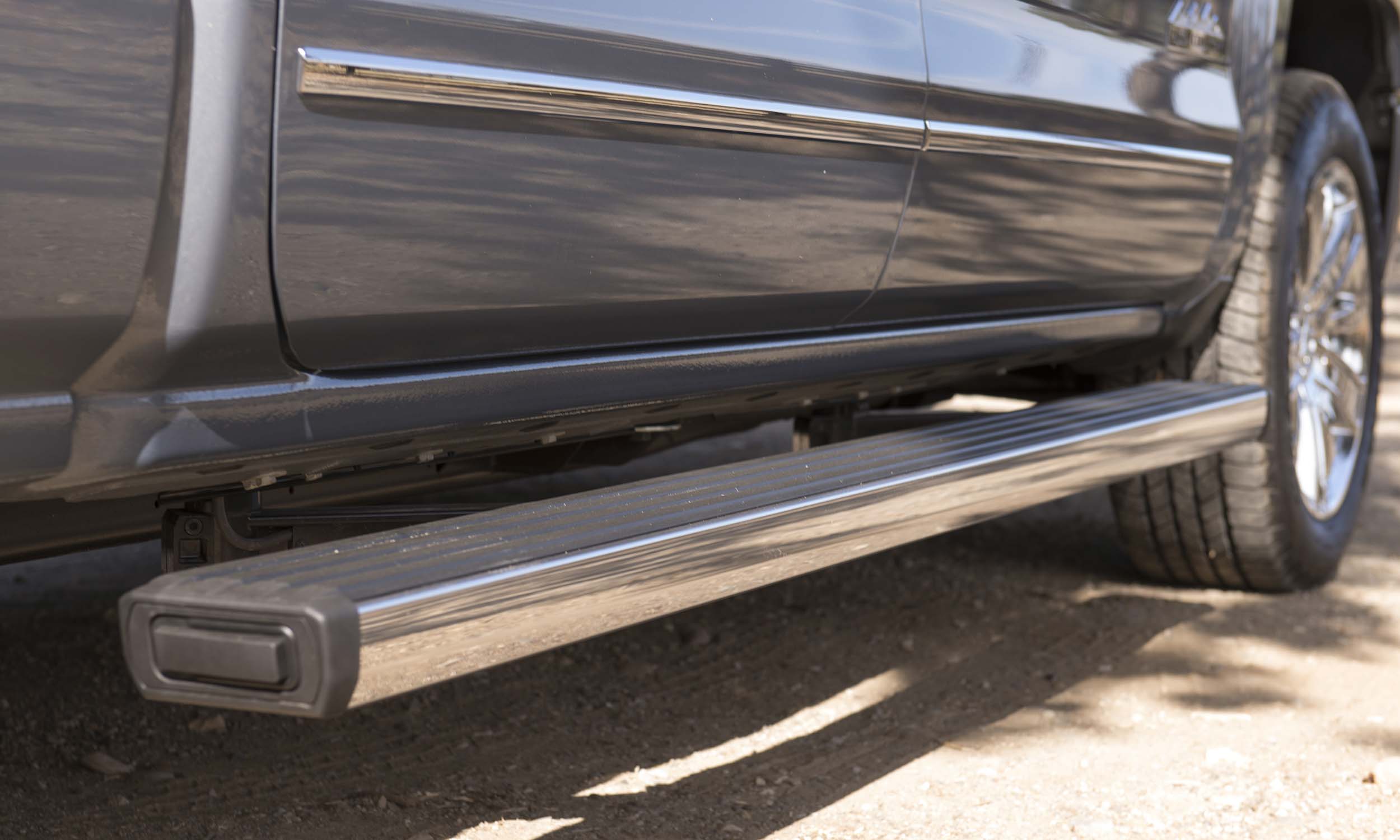 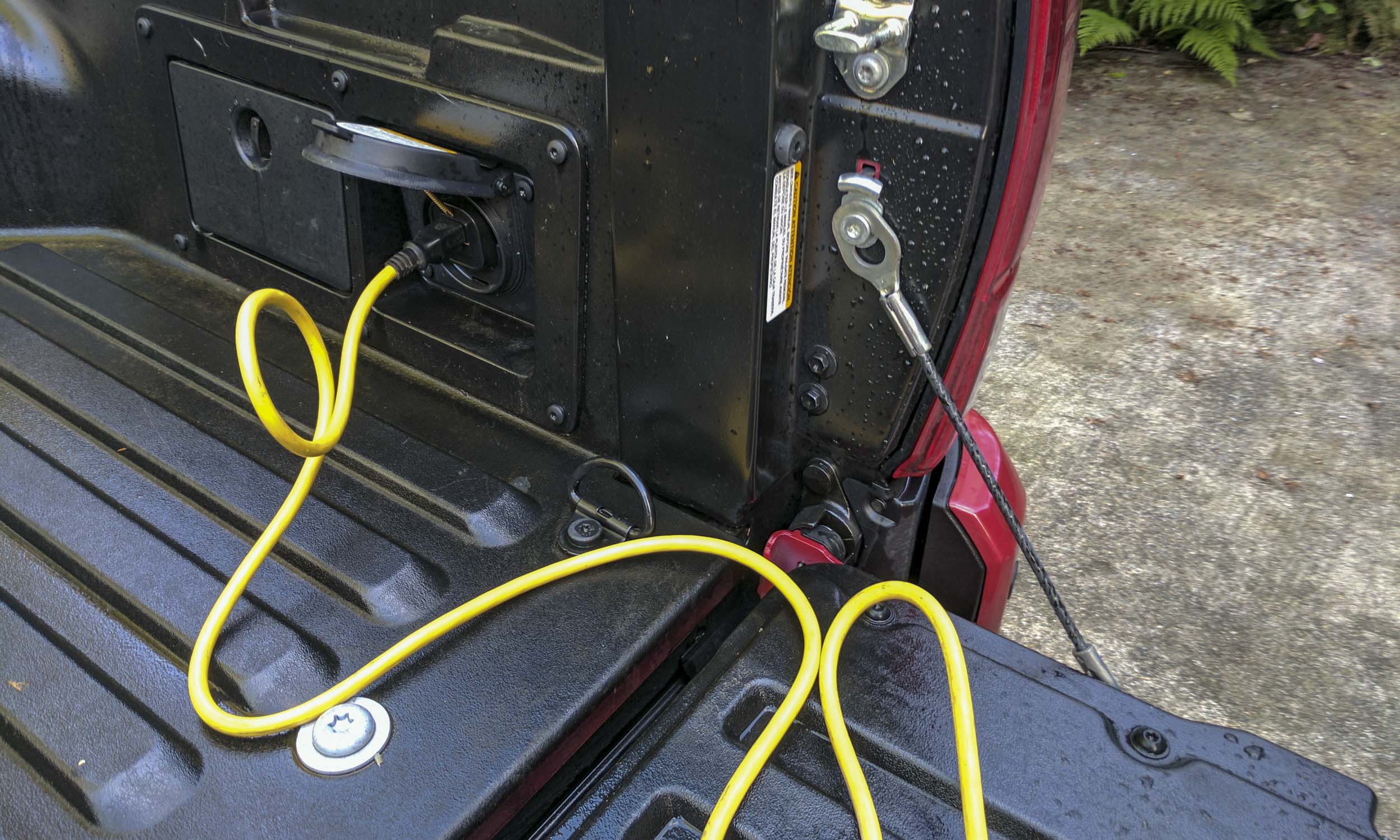 Toyota Tacoma 120v Truck Bed Outlet
This power outlet can be operated with the vehicle engine running or the key in the Accessory position. The user can select an output of either 100 or 400 watts via a dash-mounted button. The outlet is located on the passenger side at the rear of the bed, and it’s standard equipment on the three TRD variants of the Tacoma and Tacoma Limited. Other automakers offer bed-mounted outlets, but the Tacoma gets props here because of its dual-setting functionality. 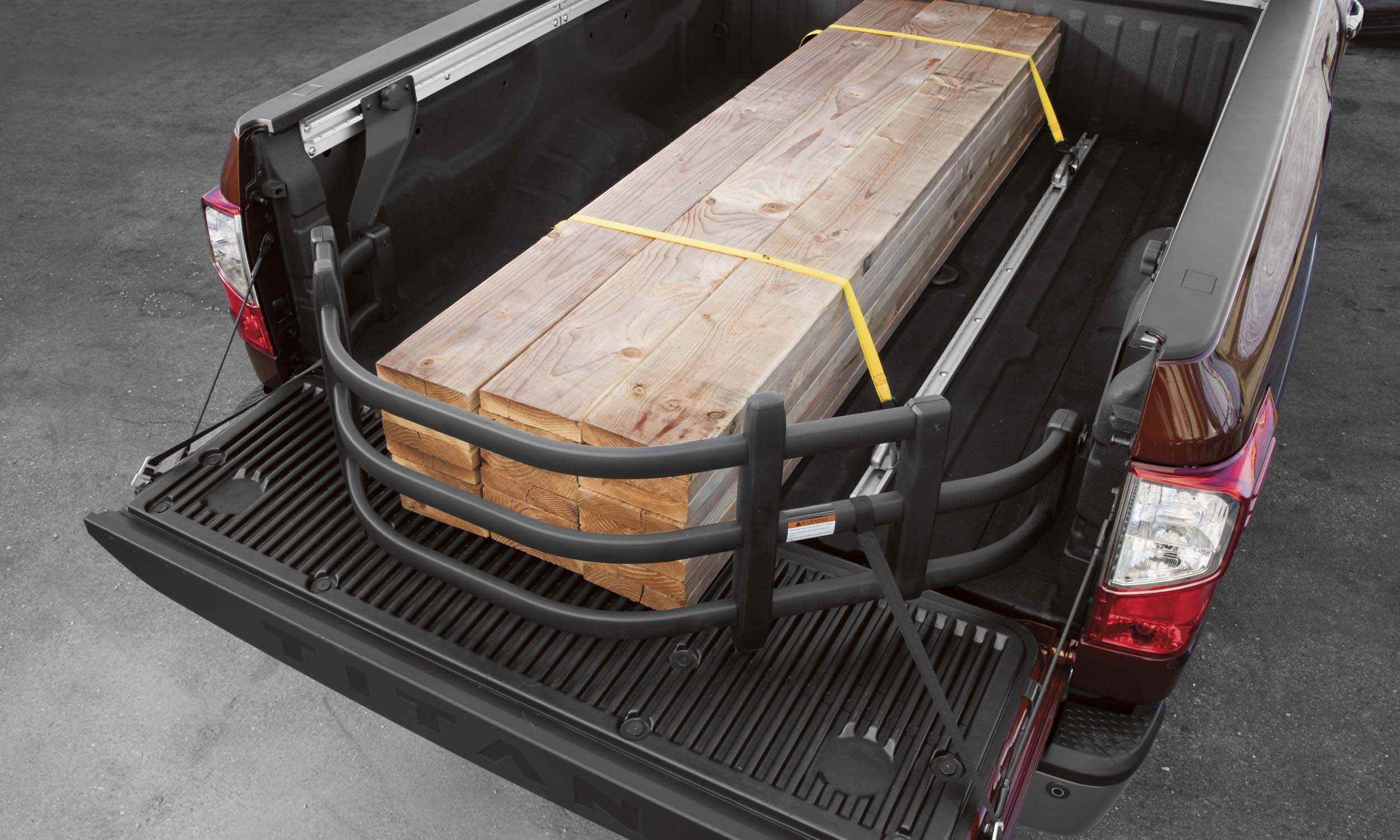 Bed Dividers / Extenders
Versions of these are available on most pickups. Some insert into slots in the bed, others use a rail system. They can be placed next to the tailgate or just behind the cab to contain cargo, or they can be positioned on a lowered tailgate to extend the usable space of the bed. 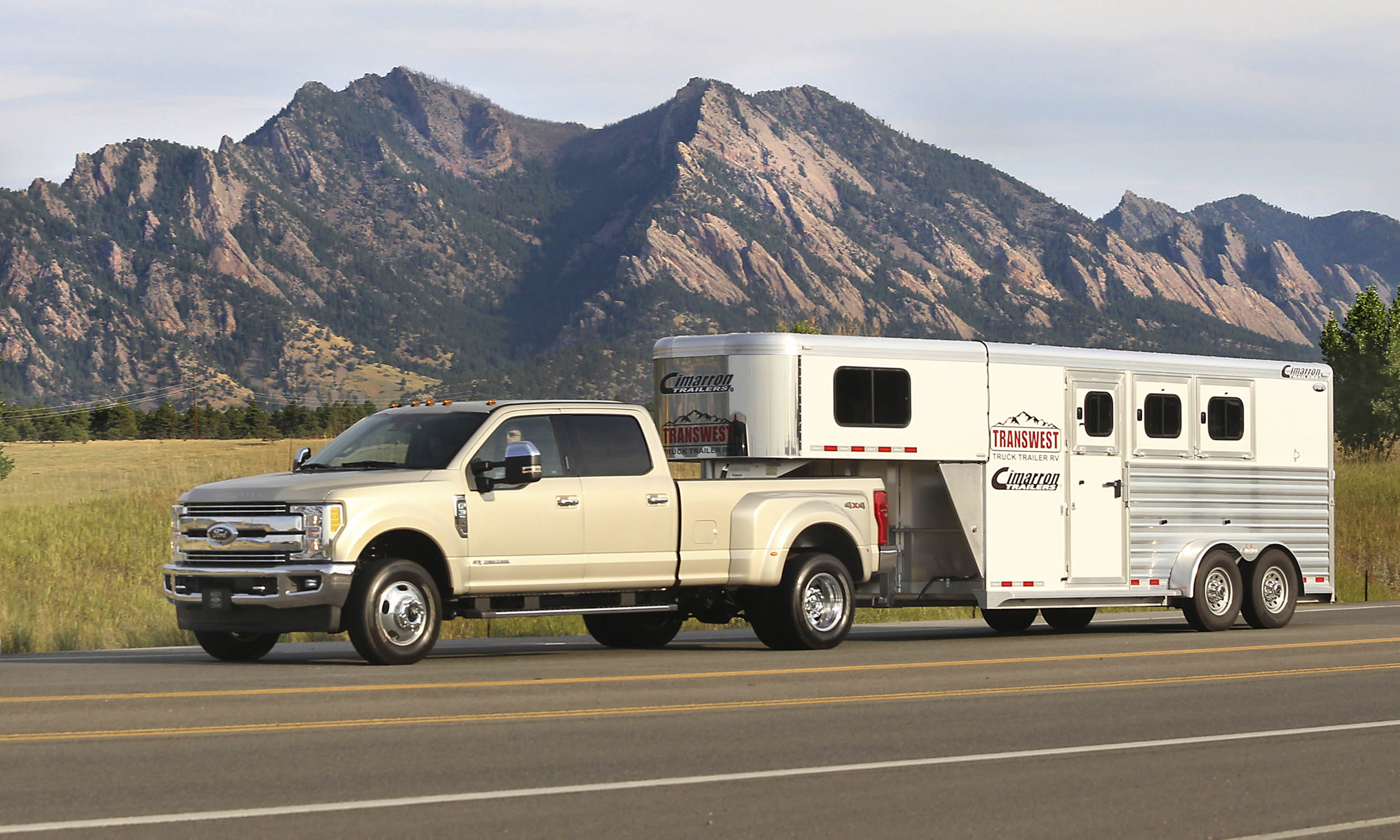 Ford F-Series Super Duty Blind Spot Information System (BLIS)
This extended blind spot alert system engages when a trailer is attached to a Ford Super Duty pickup. The BLIS uses radar to detect vehicles in the truck’s blind spot. In the Super Duty, Ford incorporates radar sensors in the taillights to extend, or move, the truck’s blind spot monitoring ability farther back to accommodate a trailer’s additional length, so the system can warn of blind-spots infiltration for the truck and the trailer it’s pulling. The driver gets alerted by a yellow light mounted in the sideview mirror housing. 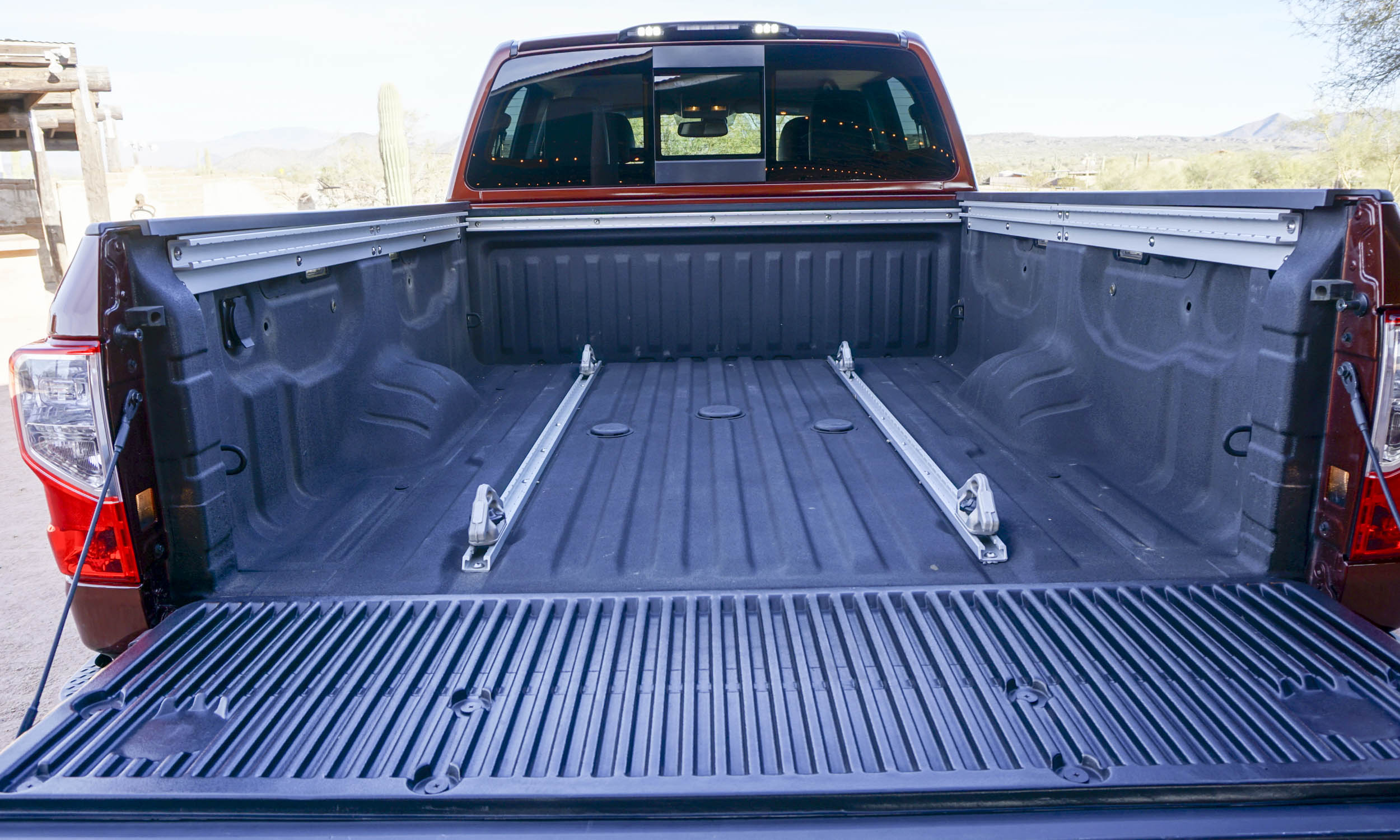 Nissan Utili-Track Cargo System
Available in the Titan, Frontier, and the Xterra SUV, this system features five built-in channels: three that ring the inside of the bed and two on the bed floor. It includes four heavy-duty aluminum cleats that slide along channels, so you can position them to accommodate cargo of myriad size, and then ratchet them down and employ them as anchors to secure the load. Nissan and aftermarket companies have a gaggle of Utili-Track accessories, including a sliding tool box, that add even more versatility to the system. 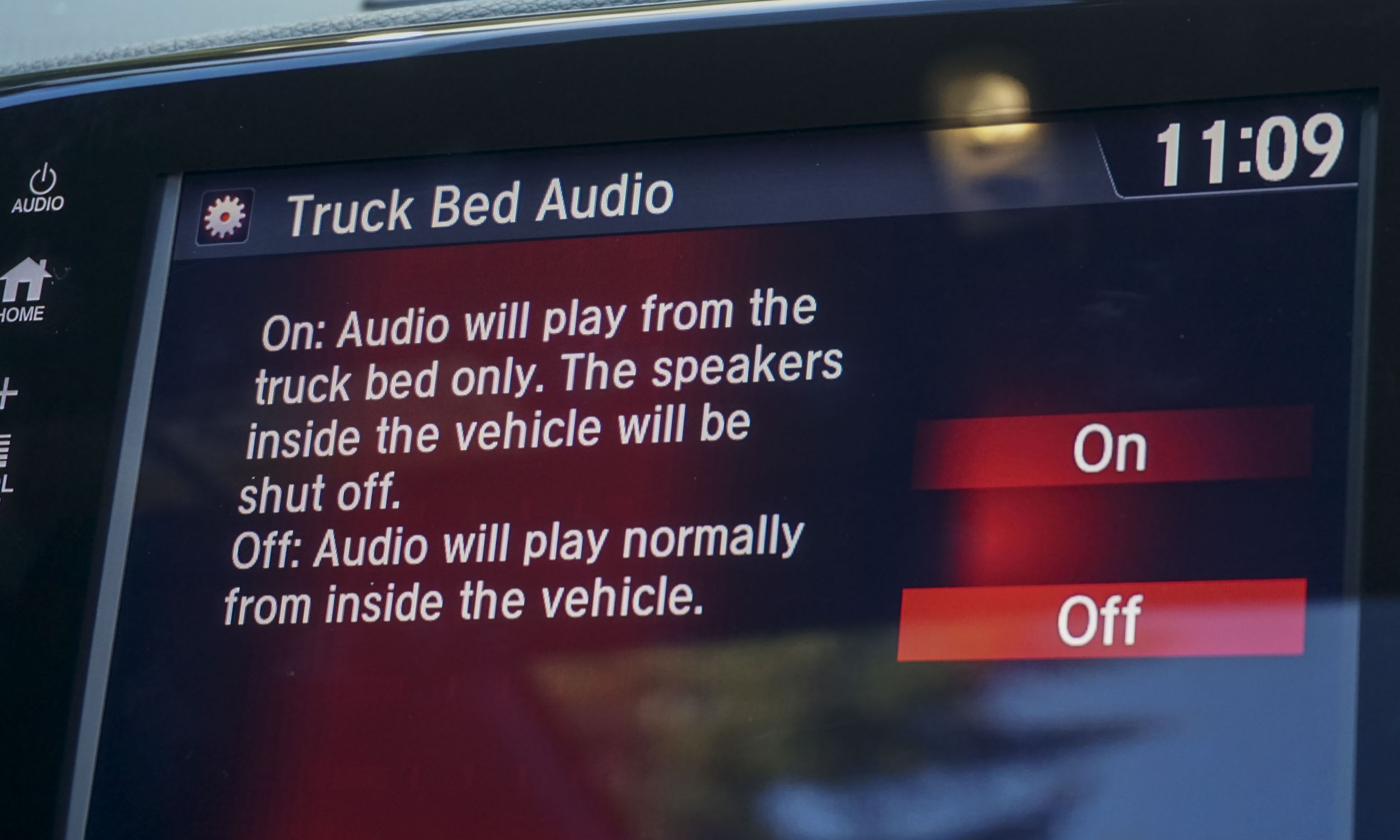 Honda Ridgeline Truck Bed Stereo
Honda’s center stack touchscreen display inside the Ridgeline’s cabin has a button for Truck Bed Audio. It funnels the stereo’s 540 watts of power to six “exciters” mounted inside the bed sides. These exciters can be described as “reverberation devices,” and they turn surfaces with suitable properties into speakers. This system is only available on up-level RTL-E and Black Edition Ridgeline variants. 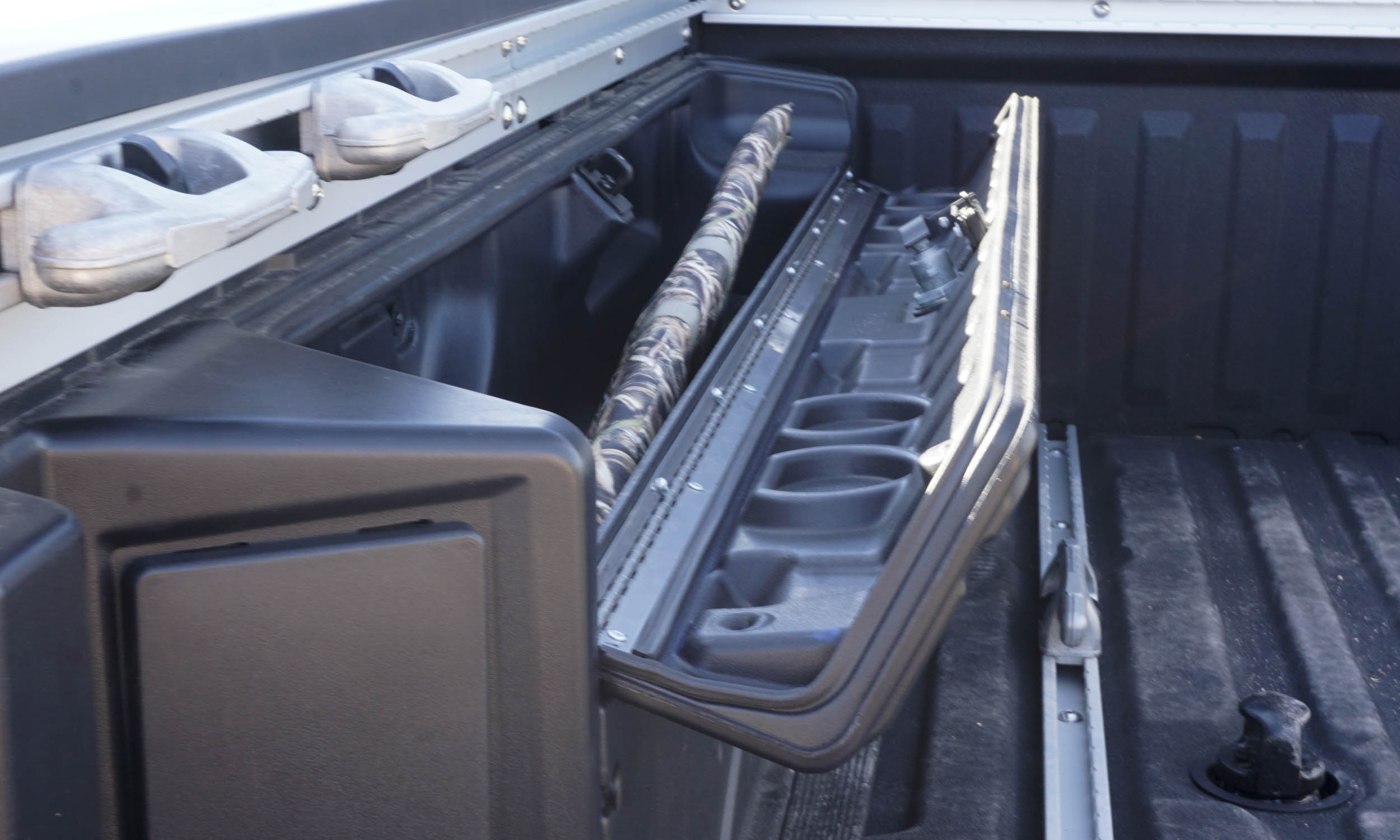 Nissan Titan Box
Available as an optional accessory on Titan SV, SL, and Pro-4X crew cab variants, Titan Boxes bolt into the sides of the truck bed, leaving the Nissan Utili-Track system free and fully functional. The boxes are positioned below the bed rails and out of sight, are only accessible from inside the bed and are dual lockable, which gives Titan Boxes enhanced security compared to RamBoxes. Since they are removable they do not sacrifice the ultimate cargo capacity of the truck bed. 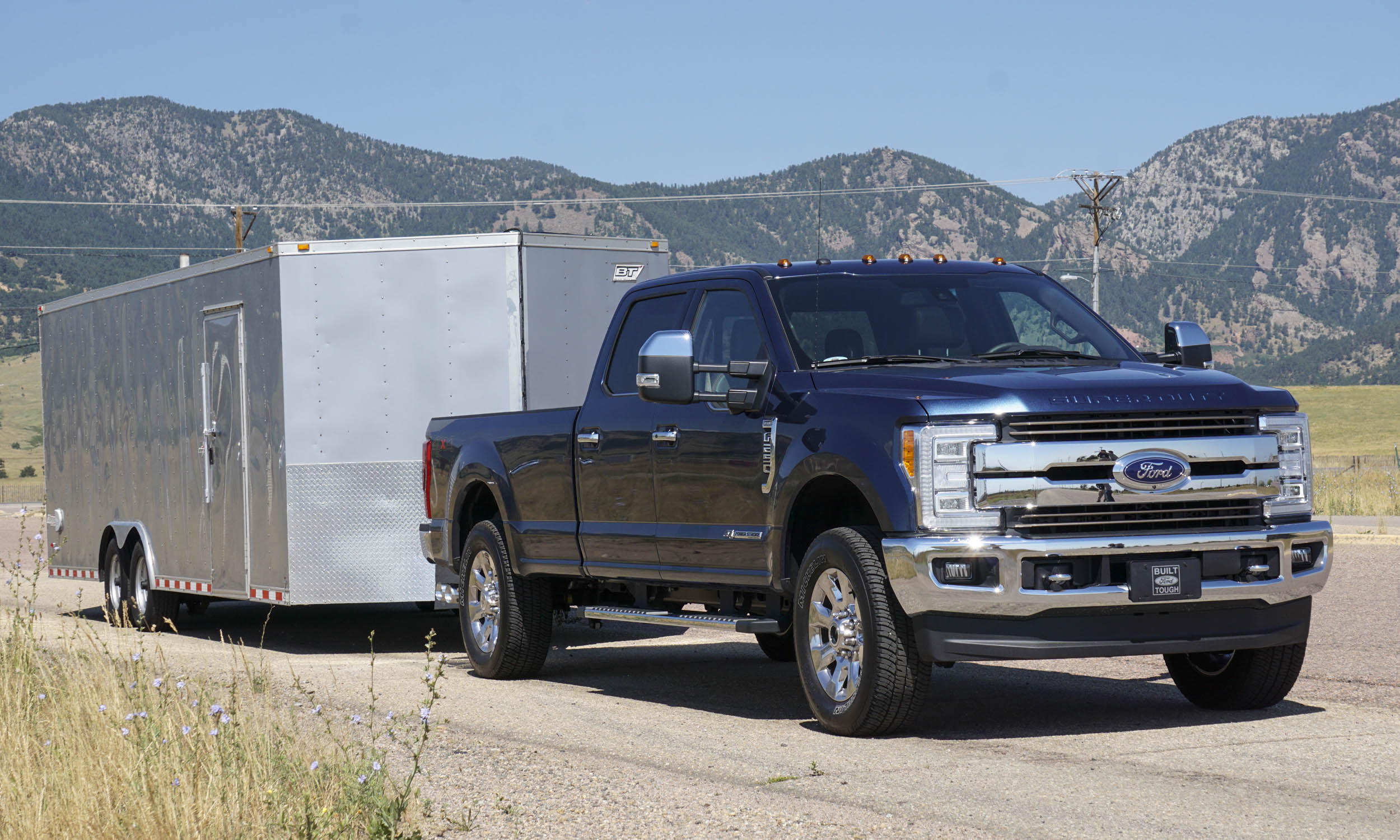 Ford Trailer-Mounted Backup Camera
Ford is up to its old tricks again with the first-ever factory-offered backup camera that secures to the back of a trailer by the owner / driver. This setup extends backup camera capabilities, retaining an important and useful safety technology that can be lost when towing. The optional camera includes a 49-foot camera-connection harness. The harness is long enough to accommodate trailers up to 35 feet.