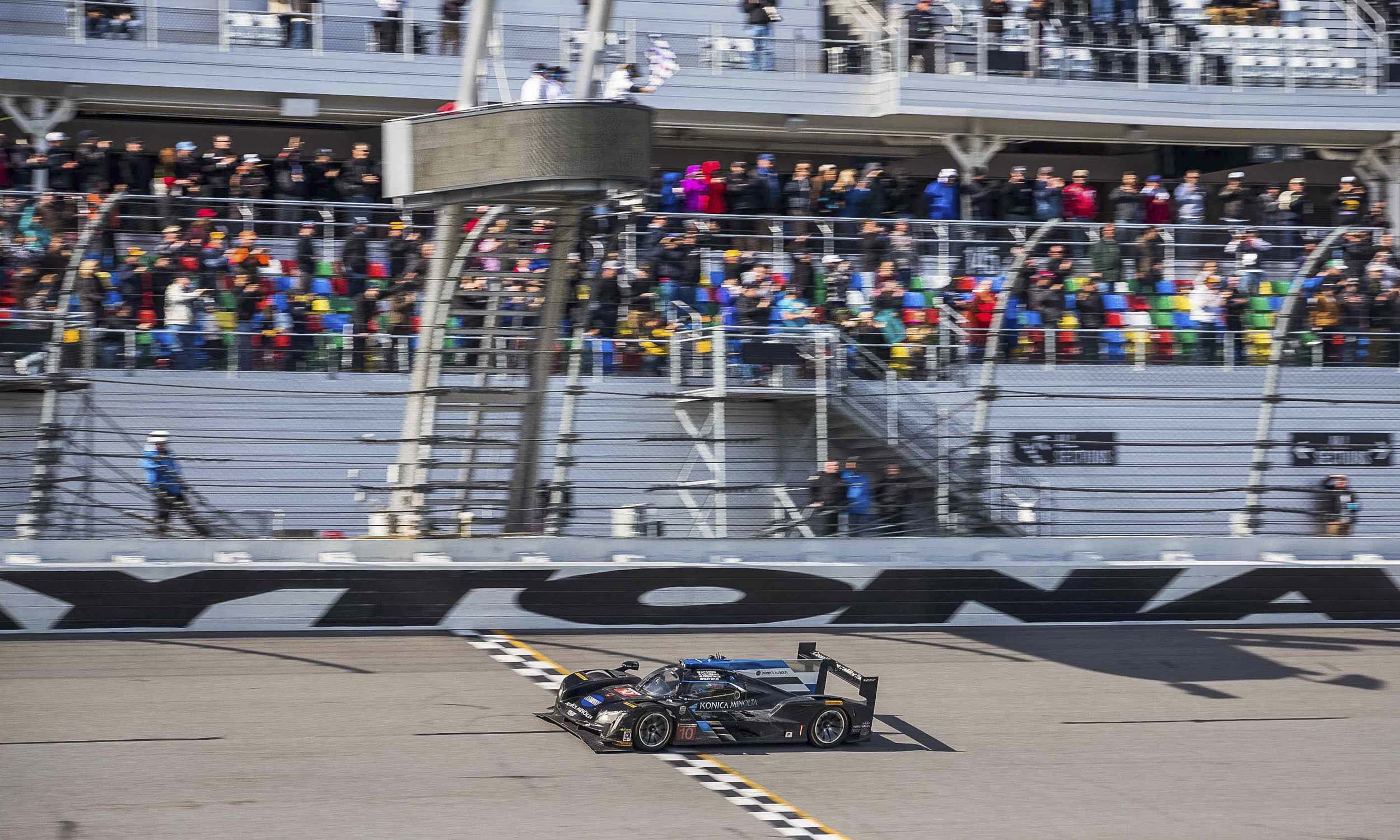 Overall Win
Ricky Taylor drove to victory in the 2017 Rolex 24 at Daytona for the No. 10 Wayne Taylor Racing Konica Minolta Cadillac DPi-V.R prototype, overcoming strong competition and treacherous weather conditions to win by a mere 0.671 seconds after 24 hours of racing. It was the first Rolex 24 win for Wayne Taylor racing since 2005, and the first race win for the all-new Cadillac DPi-V.R in the new Daytona Prototype International class of the IMSA WeatherTech SportsCar Championship. 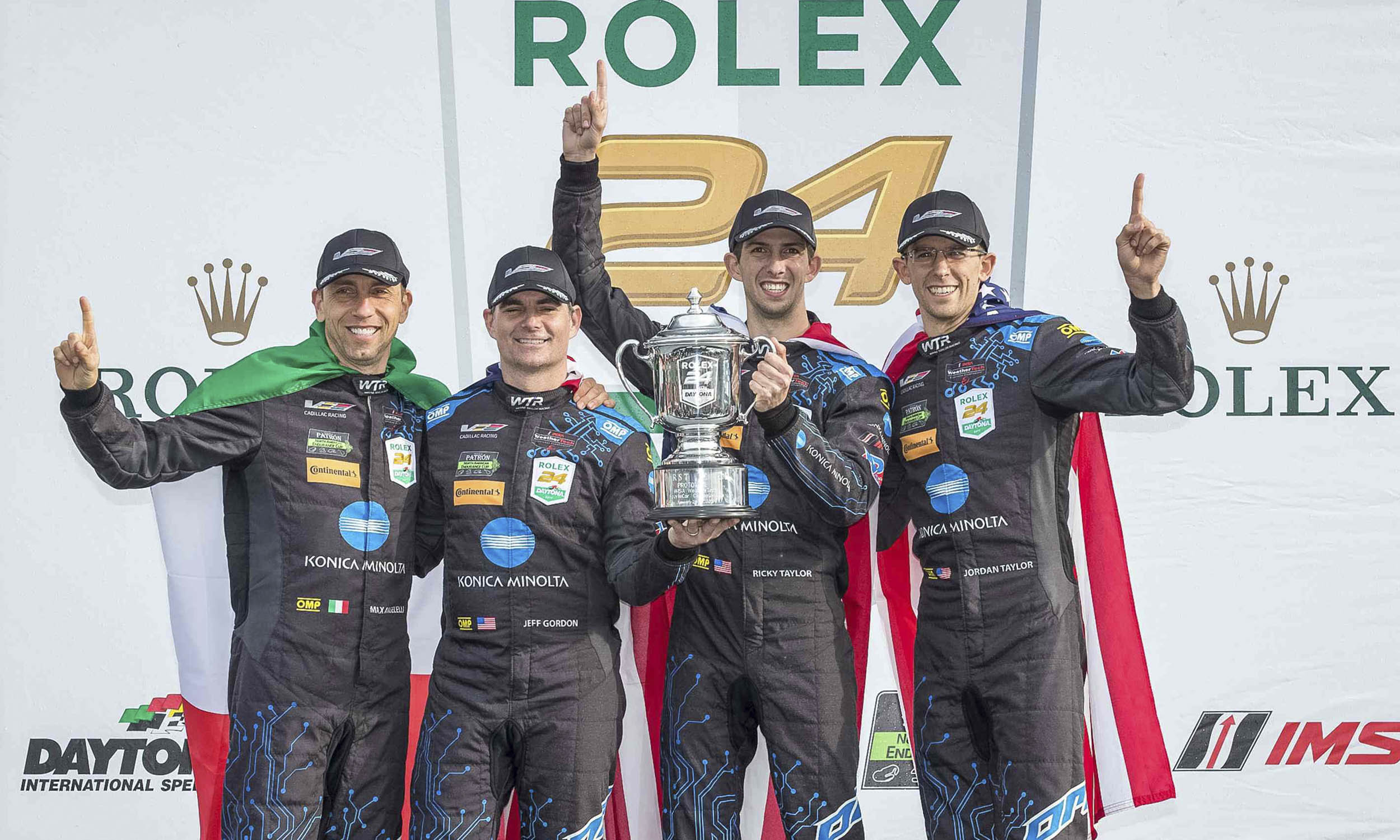 Jeff Gordon Wins Rolex 24
Four-time NASCAR Cup Champion Jeff Gordon joined Wayne Taylor Racing for the Rolex 24, teaming with Ricky Taylor, Jordan Taylor and veteran sports car racer Max Angelelli to take the victory. “I just couldn’t believe it,” said Gordon. “It was like a dream come true for me because I’ve always dreamt about driving a car, a beautiful, amazing car that could handle like this, that had the technology like this and could compete in a race like this.” 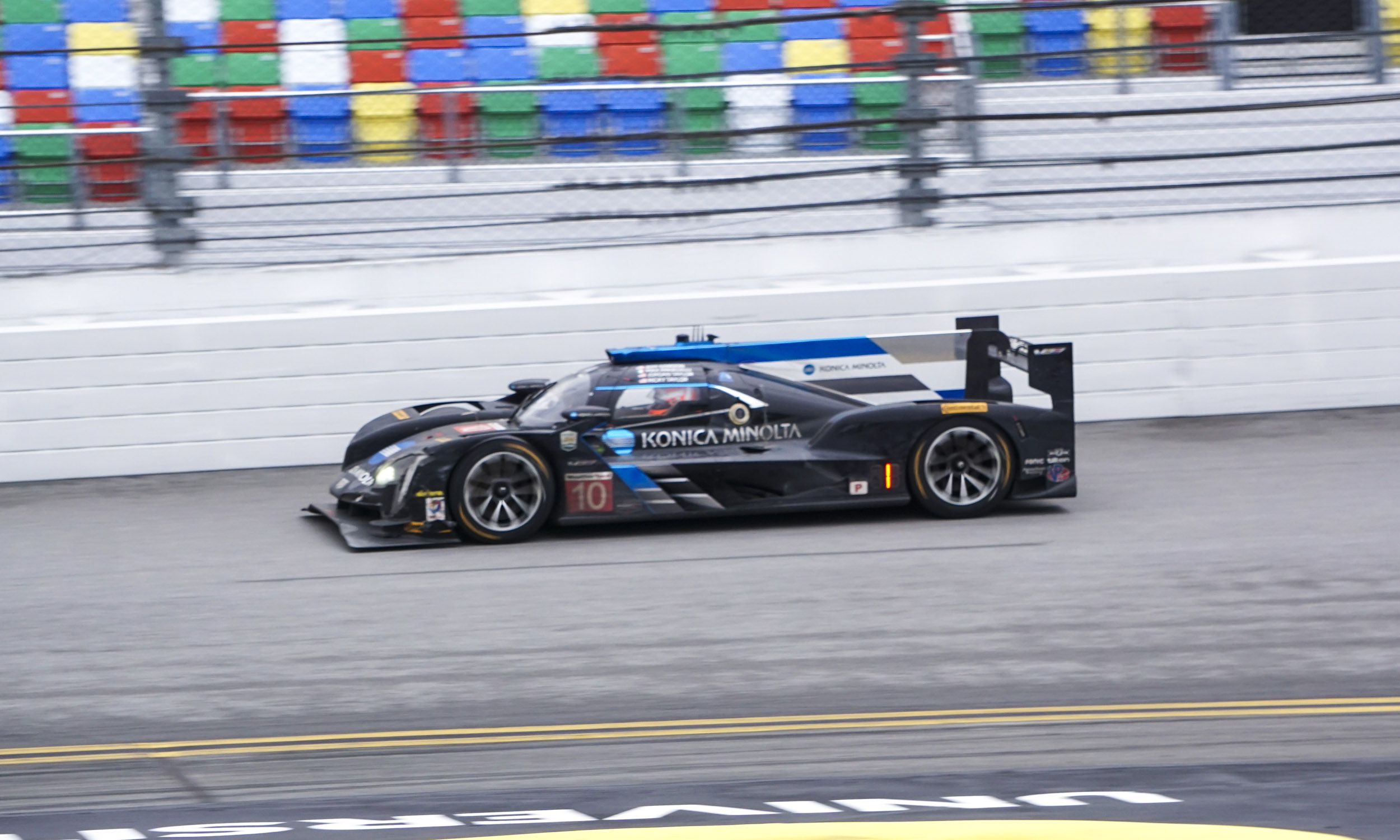 Exclusive Group
With this Rolex 24 win, Jeff Gordon joins an elite group of only three other drivers who have won both the Daytona 500 and the Rolex 24. “This is very surreal to me, this whole experience and moment, to have this on my resume, it’s a very elite group that’s won the Daytona 500 and the Rolex 24 together,” said Gordon. “That’s something I’m very, very proud of.” Only AJ Foyt, Mario Andretti and Jamie McMurray had won both races until Gordon accomplished the feat. Gordon first joined Wayne Taylor Racing for the 2007 Rolex 24 when he drove with team owner Wayne Taylor and Max Angelelli to a third-place finish. 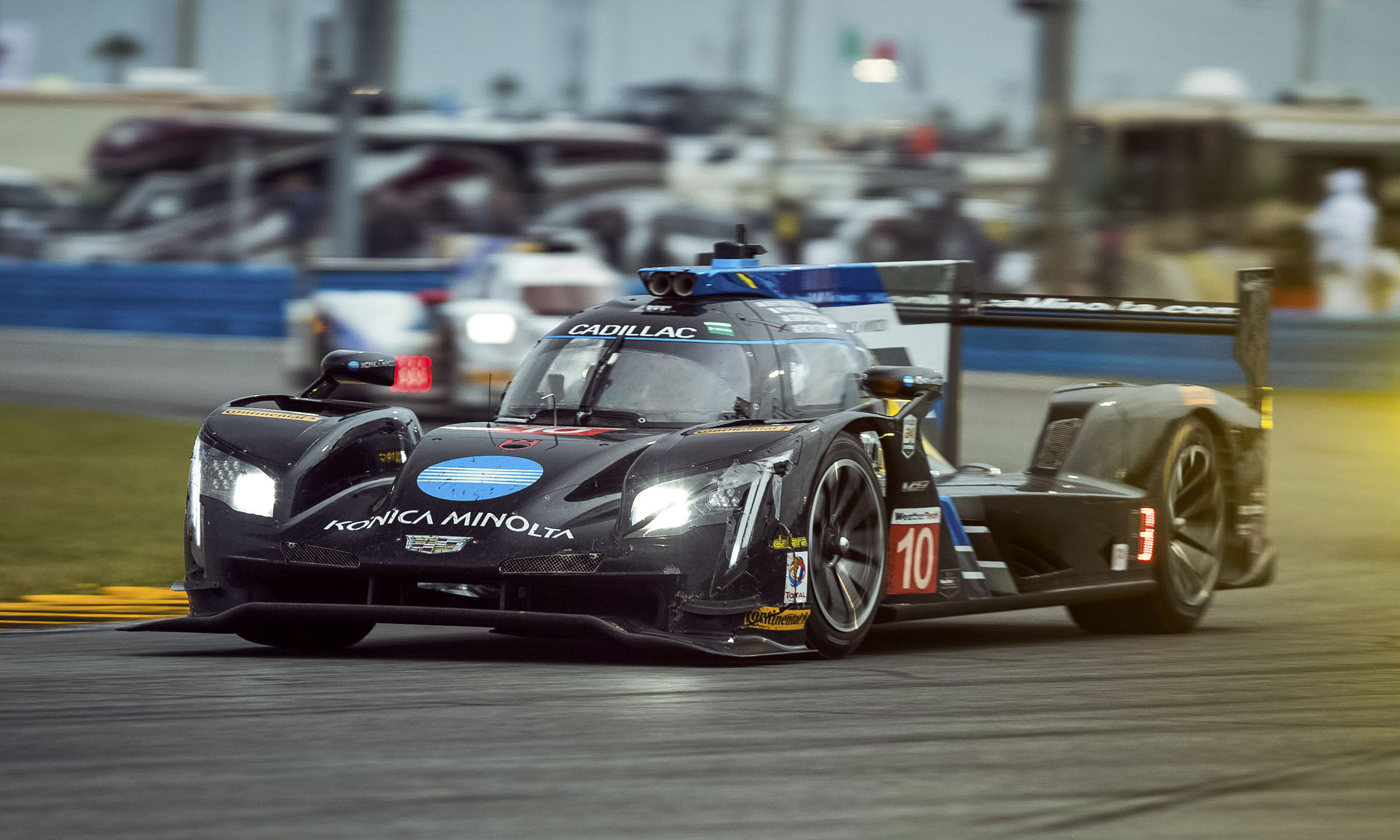 Controversial Pass
After 24 hours of strong competition against the other DPi competitors, Ricky Taylor was in second place during the final 10 minutes of the race to the No. 5 Mustang Sampling Racing Cadillac DPi-V.R driven by Filipe Albuquerque. As time wound down, Taylor stuck the nose of the Cadillac prototype inside the No. 5 entering Turn 1 as they braked to enter the infield section of the course, and when Albuquerque closed the door Taylor hit the left rear of the No. 5 which caused it to spin. Taylor passed for the lead and the incident was reviewed by IMSA officials, but no action was taken against Taylor, which did not sit well with Albuquerque. Joao Barbosa and Christian Fittipaldi co-drove the No. 5 Cadillac DPi-V.R. 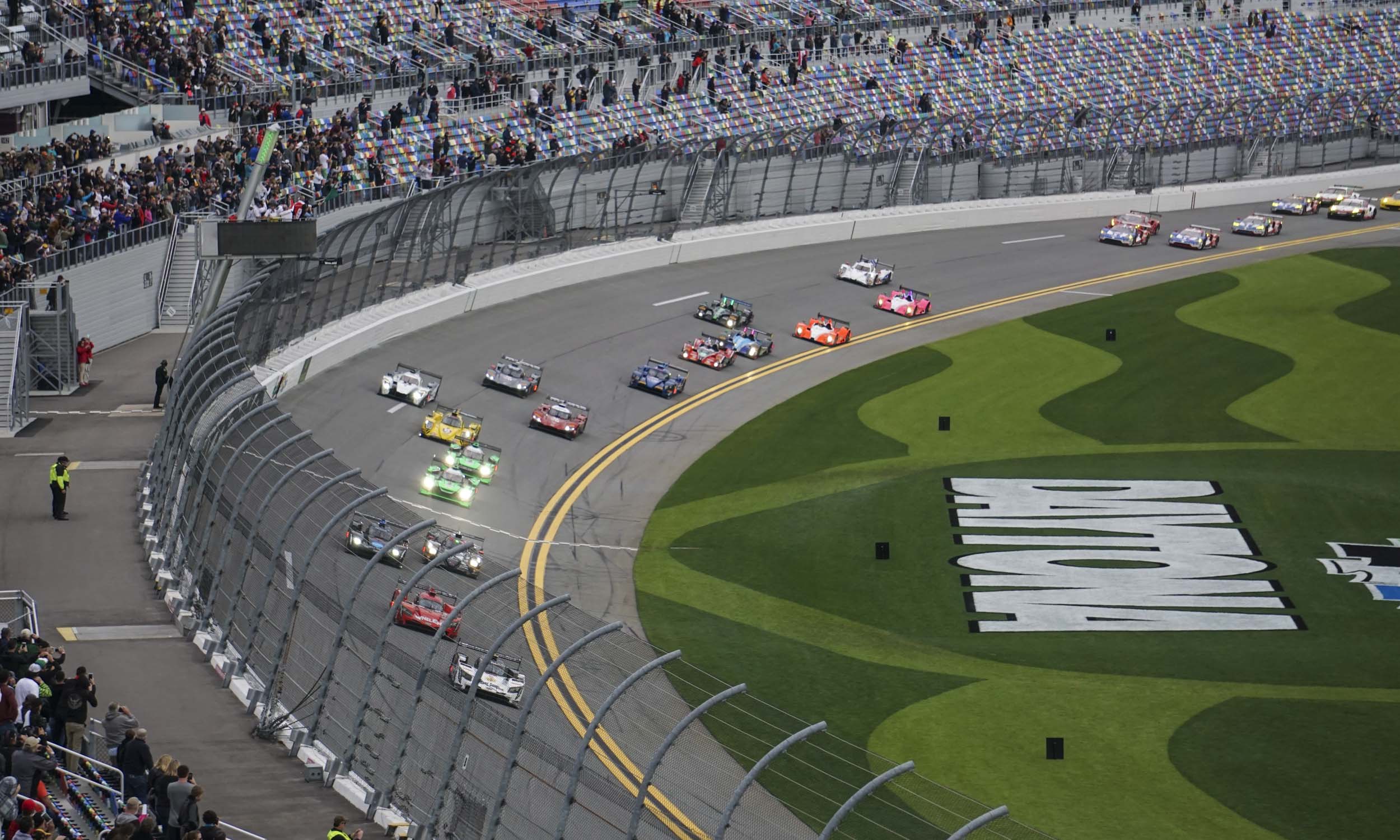 Grueling Race
The Rolex 24 at Daytona is always a tough test of nerves and machines — a 24-hour endurance race held at the end of January, which means many hours of racing in the dark. Add the high-speed, high banks of Daytona International Speedway combined with a tricky infield road course section and you have a recipe for exciting racing action. But this year conditions were even tougher, thanks to about 10 hours of steady rain making track conditions treacherous, as well as a total of 21 full-course caution periods. The changing weather conditions were the toughest, with the race starting at 70 degrees and sunny before dropping to 40 degrees and raining for most of the night. There were two extended full-course caution periods behind the safety car during the night due to the rain. 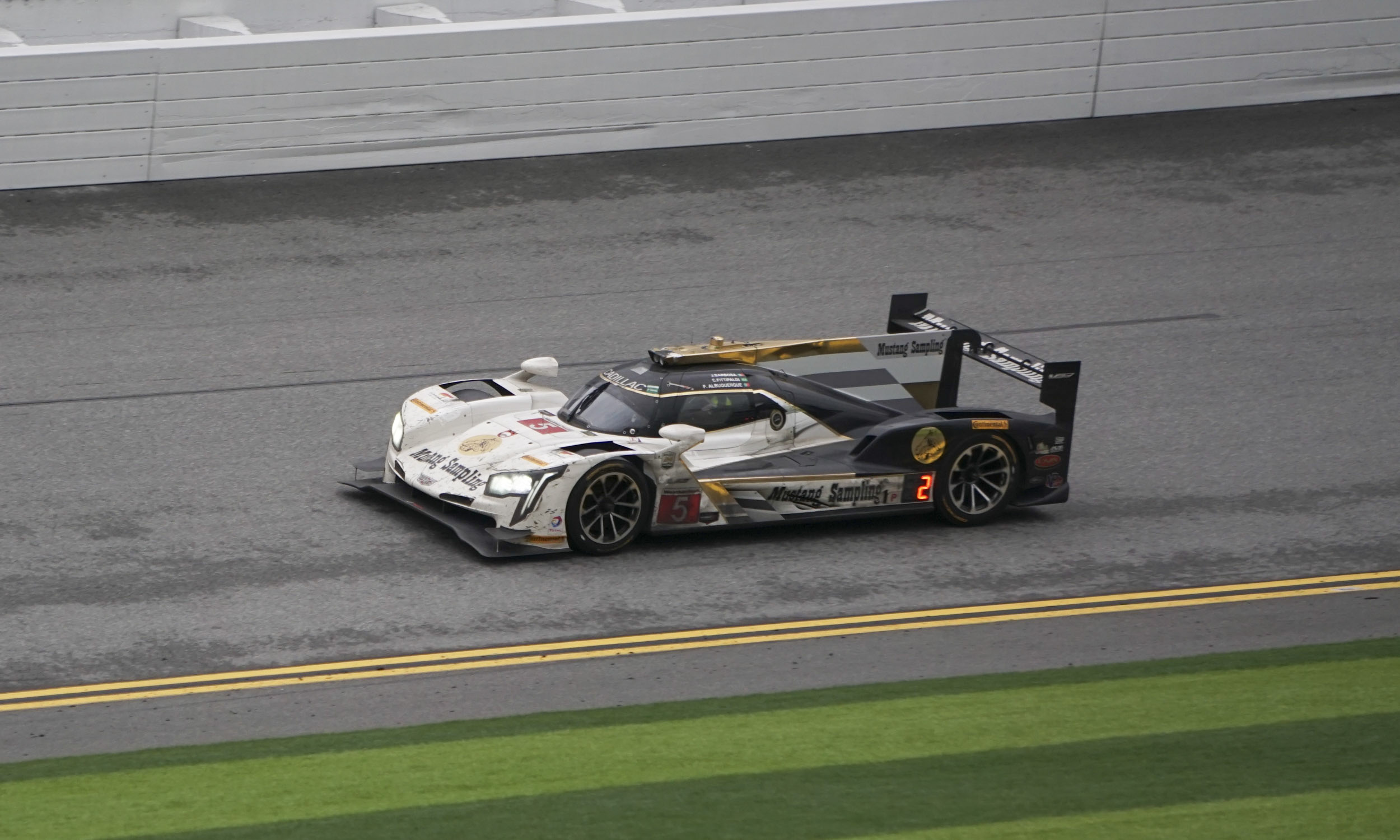 New Prototype Class for 2017
The top IMSA prototype class is new for 2017, including both the Daytona Prototype International cars and the LM P2 machines. The first race for the new DPi machines saw seven entries powered by three different engine manufacturers: Cadillac, Mazda and Nissan. The five LM P2 entries are all powered by the same Gibson V8 engine. Despite being the first race for the DPi machines, the Cadillac DPis shared the lead the first 240 laps of the race and led all but 49 of the 655 total race laps. The No. 90 VisitFlorida Racing LM P2 driven by Marc Goossens, Renger Van Der Zande and Rene Rast finished third behind the two Cadillac DPis. 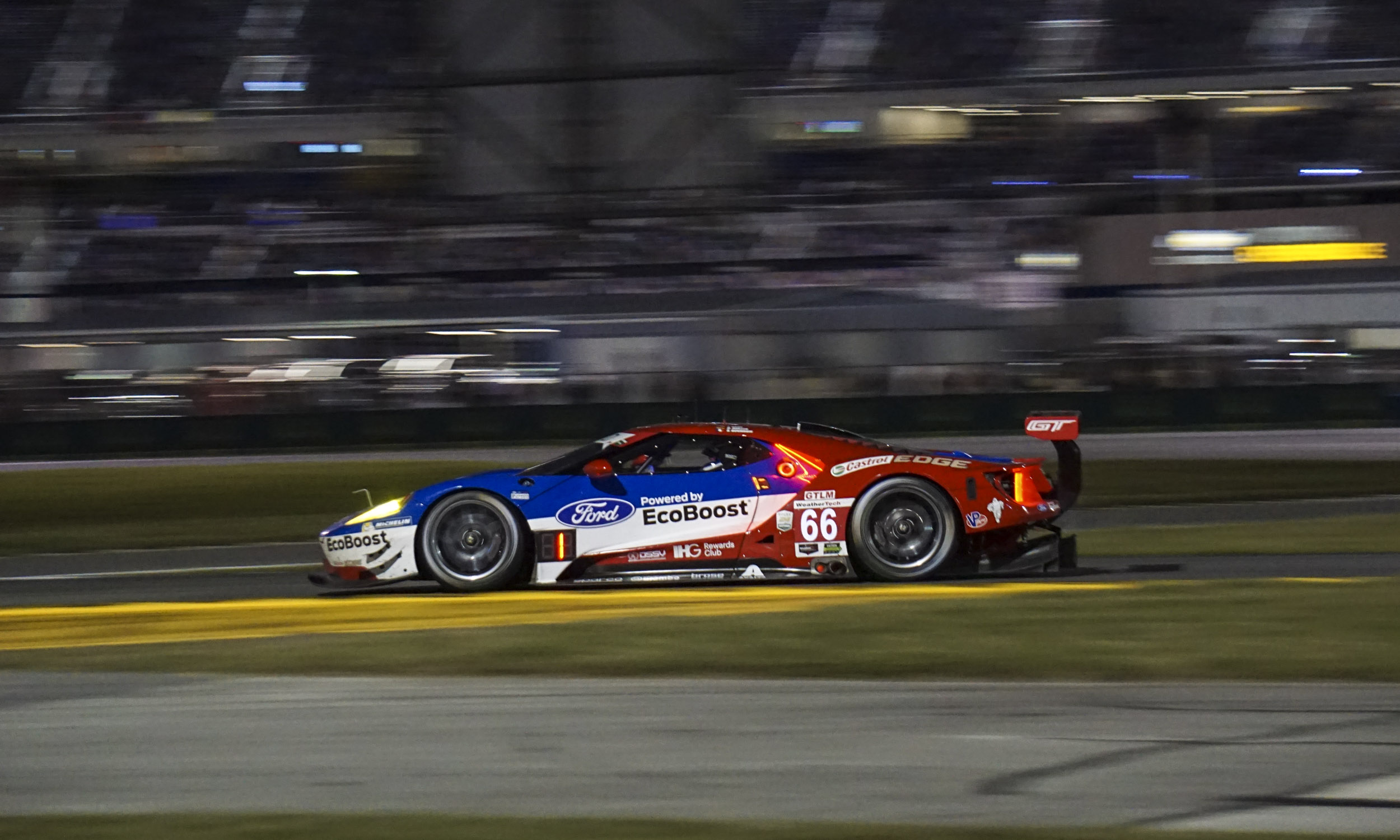 GT Le Mans Class
The No. 66 Ford Chip Ganassi Racing Ford GT took the win in the GT Le Mans — or GTLM — class, running in front for most the race in the ultra-competitive class for production based cars. Dirk Mueller, who teamed with Joey Hand and Sebastien Bourdais for the win, left the last pit stop in third position and passed both the No. 62 Risi Competizione Ferrari 488 GTE and the No. 911 Porsche 911 RSR in the final minutes to take the victory by less than 3 seconds. 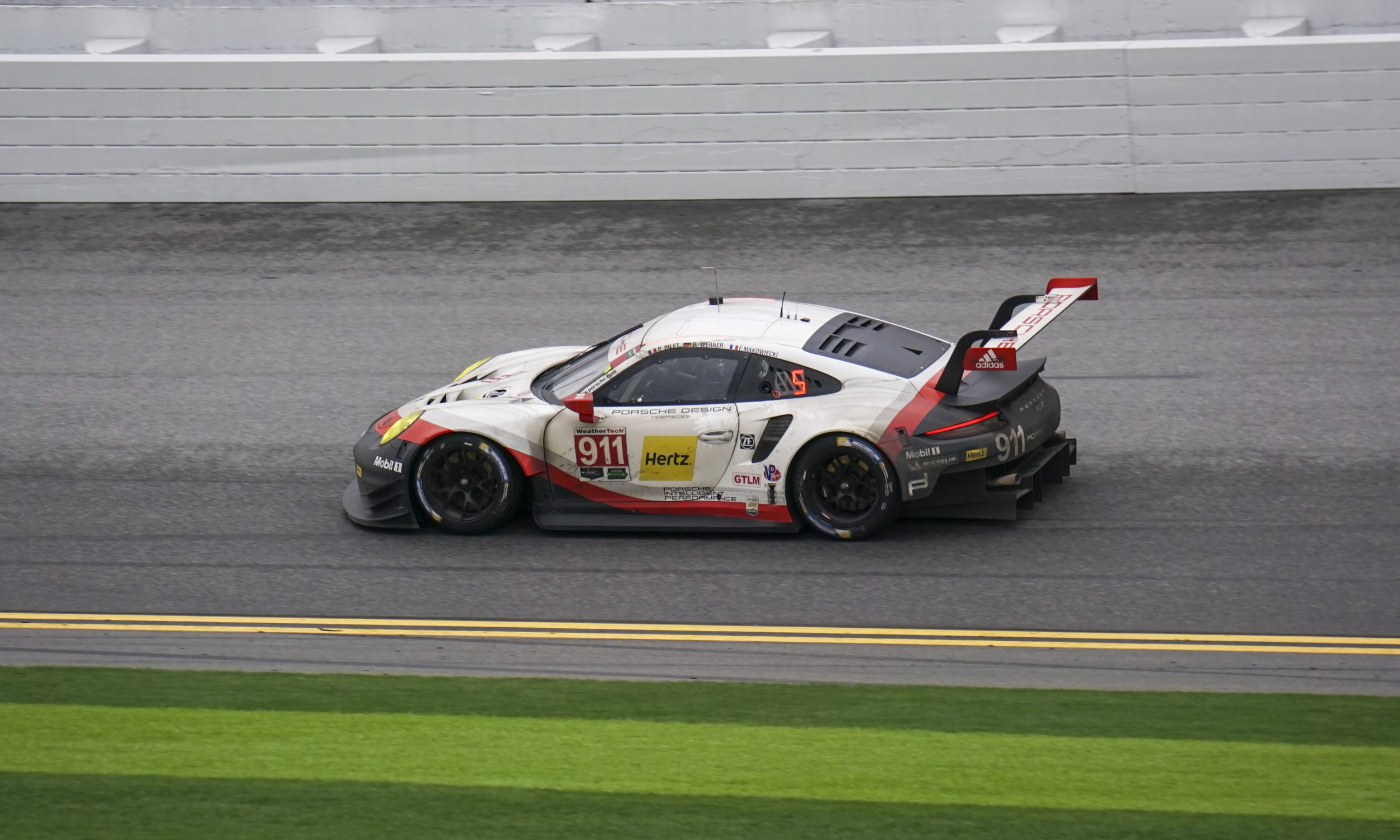 Fierce Competition
After 24 hours of racing, the top seven of the 11 cars in GTLM finished on the same lap, and 10 of the 11 held the class lead during the race. The No. 911 Porsche 911 RSR finished second, driven by Patrick Pilet, Dirk Werner and Frederic Makowiecki, with the No. 62 Risi Competizione Ferrari 488 GTE finishing just 0.091 second behind, driven by Giancarlo Fisichella, James Calado and Toni Vilander. The No. 3 corvette Racing Corvette C7.R finished fourth, driven by Antonio Garcia, Jan Magnussen and Mike Rockenfeller. The top seven cars in the class were within 7.5 seconds of each other at the finish. 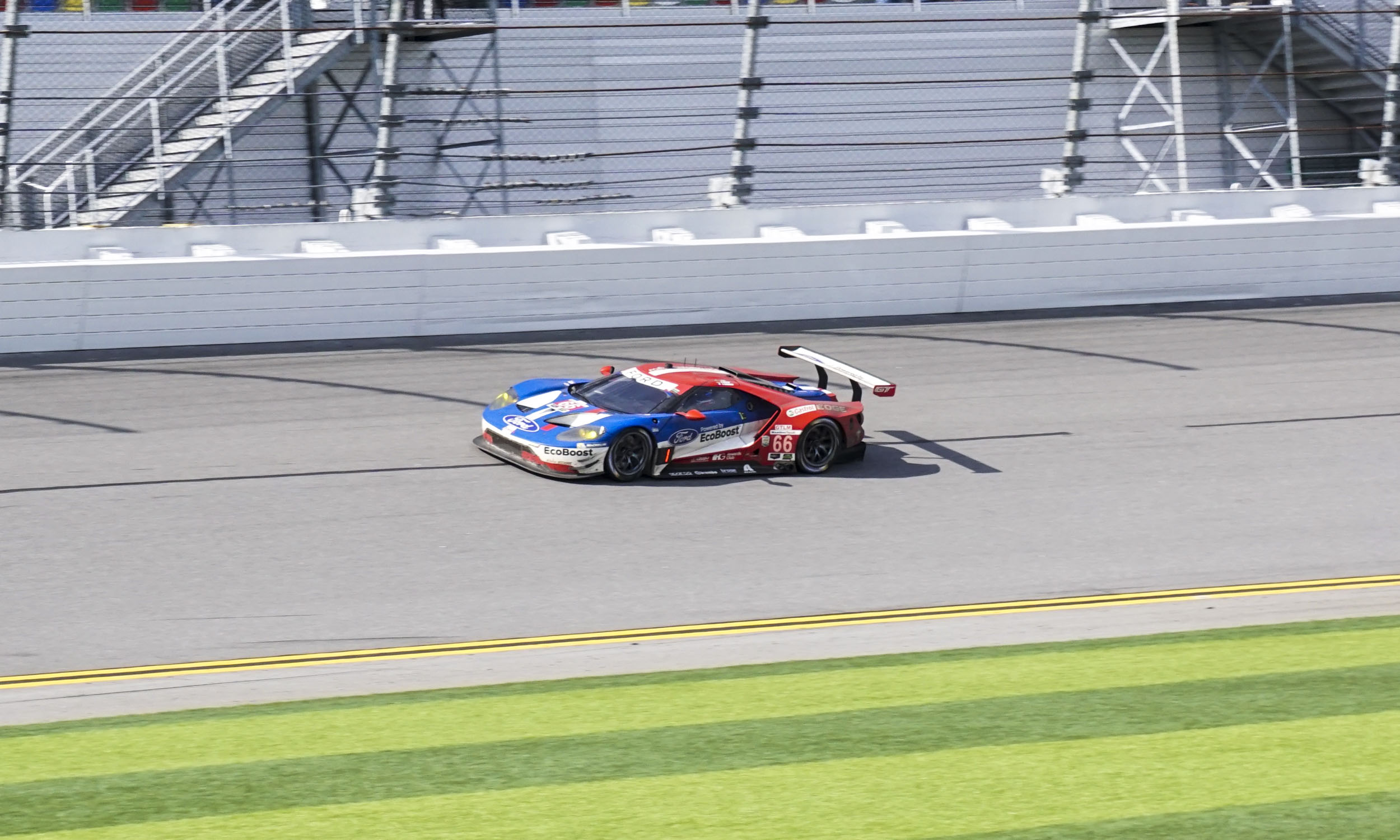 Unfinished Business
The Rolex 24 win for the Ford Chip Ganassi Racing Ford GT took care of unfinished business that began with the racing debut of the new Ford GT at the 2016 Rolex 24, where the original Ford GT had won previously in the 1960s. After running as high as third early in the race, both cars dropped back with gearbox issues and were not able to compete for the win. Later in June, the Ford GT did win the GTE class at the 24 Hours of Le Mans, 50 years after the first Ford GT win in 1966. The 2017 Rolex 24 win solidifies the Ford GT’s return to racing. 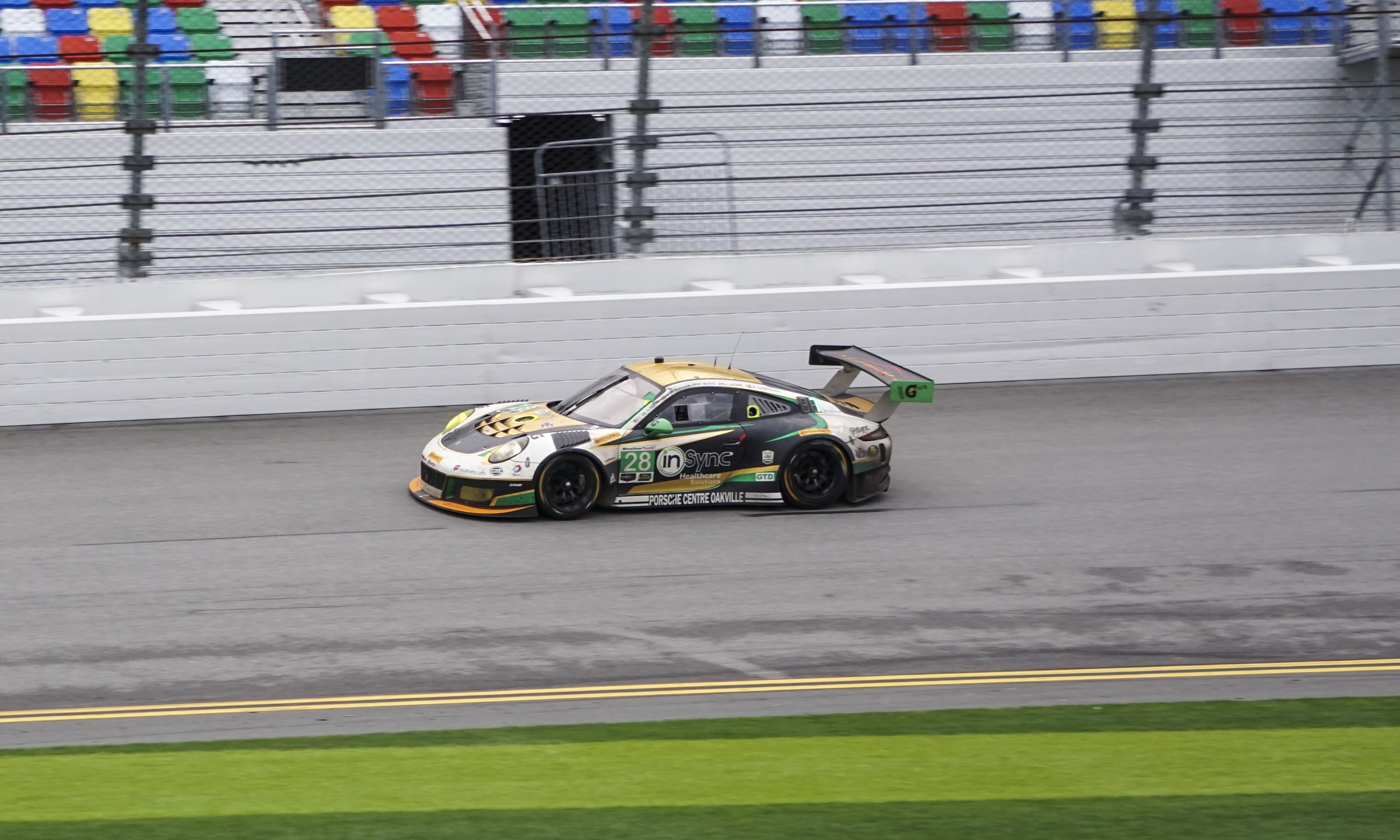 Grand Touring Daytona
The largest class in the field with 27 entries representing 9 different manufacturers, Grand Touring Daytona, or GTD, is the second class for production-based cars, including new cars this year from Acura, Lexus and Mercedes-AMG. The No. 28 Alegra Motorsports Porsche 911 GT3 R was a surprise winner as Michael Christenson went from seventh position to first in the final hours of racing, leading the final 29 laps after leading only 9 laps of the first 605. Alegra Motorsports and Team owner Carlos de Quesada also won the GT class at the Rolex 24 in 2007, and this year de Quesada surrounded himself with four young Porsche drivers including his 17-year-old son Michael, Daniel Morad and Jesse Lazare in addition to Christenson. 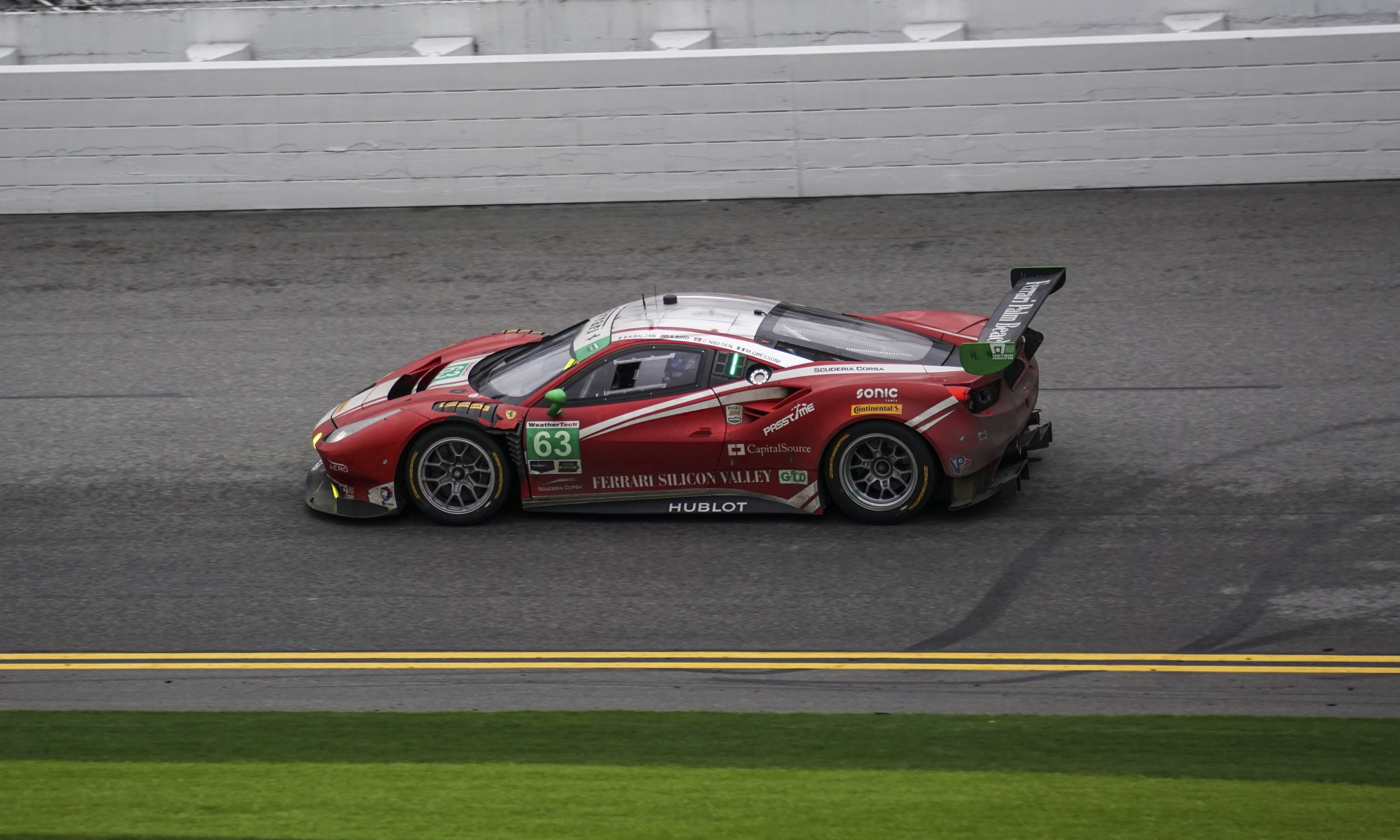 Tough Break for Ferrari
The No. 63 Scuderia Corsa Ferrari 488 GT3 led many laps in the GTD class and was in the lead with just two hours to go when the engine blew, ending their race. Five cars finished on the same lap in GTD, with the No. 29 Montaplast by Land-Motorsports Audi R8 LMS GT3 driven by Connor De Philippi, Christopher Mies, Jules Gounon and Jeffrey Schmidt second, just 0.293 seconds behind the No. 28 Porsche 911 GT3 R. 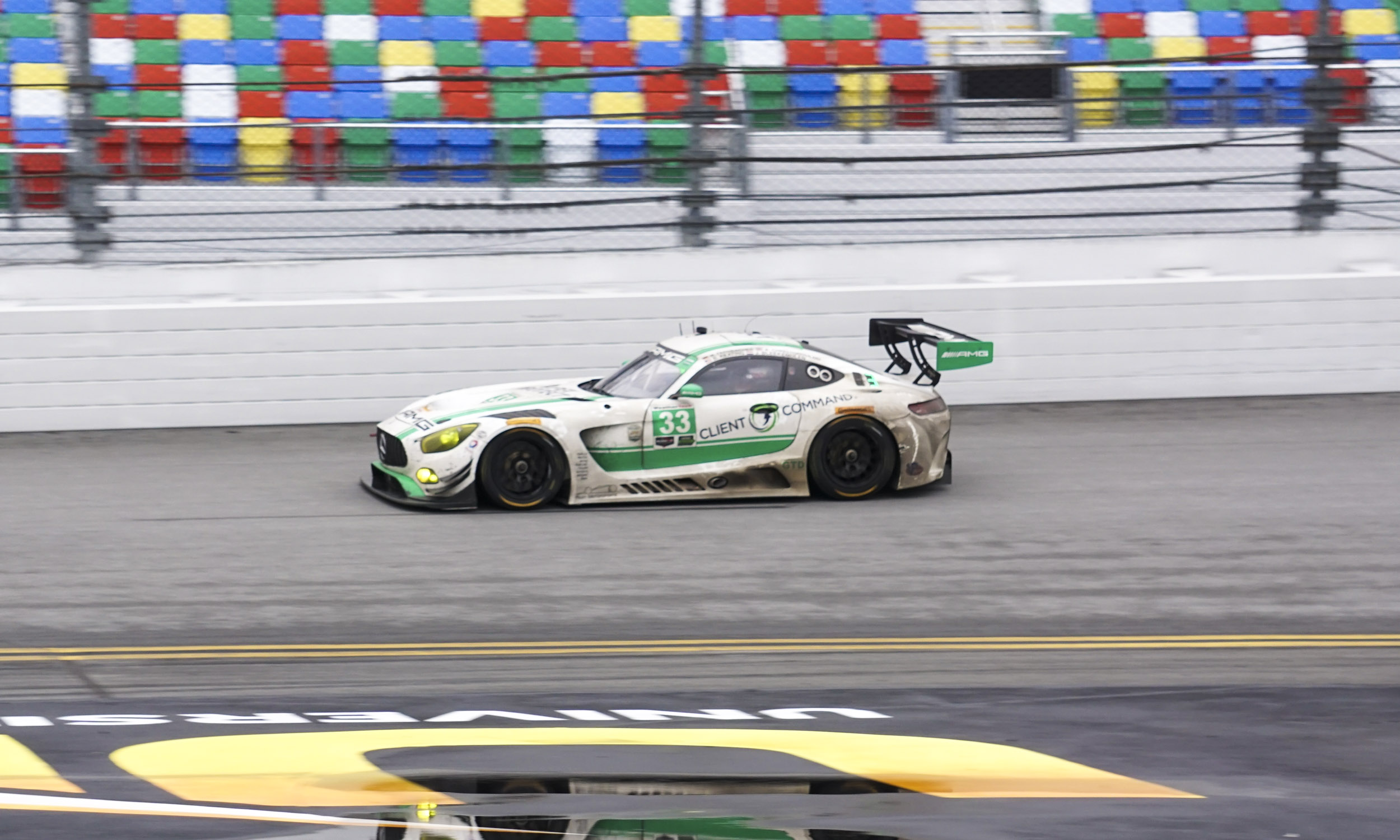 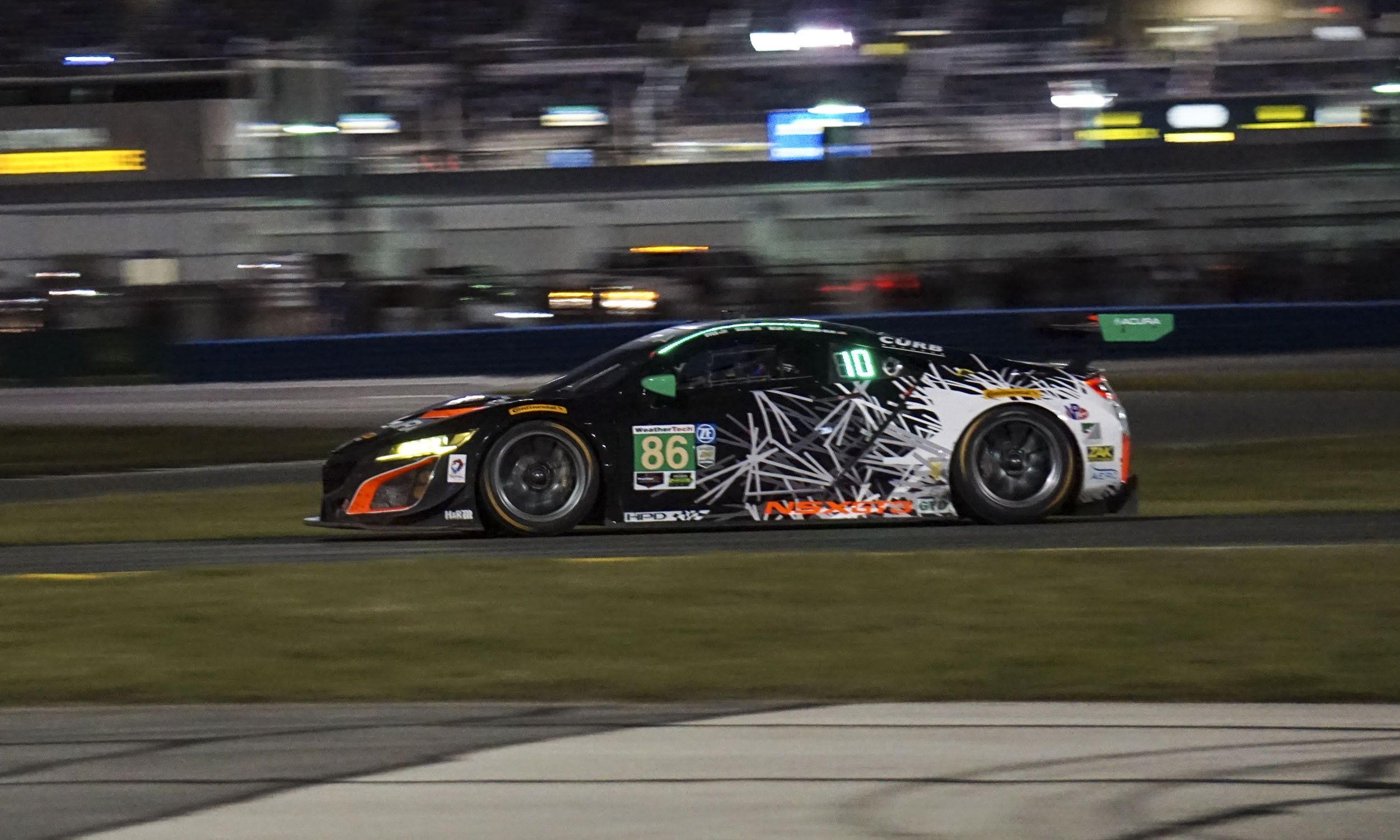 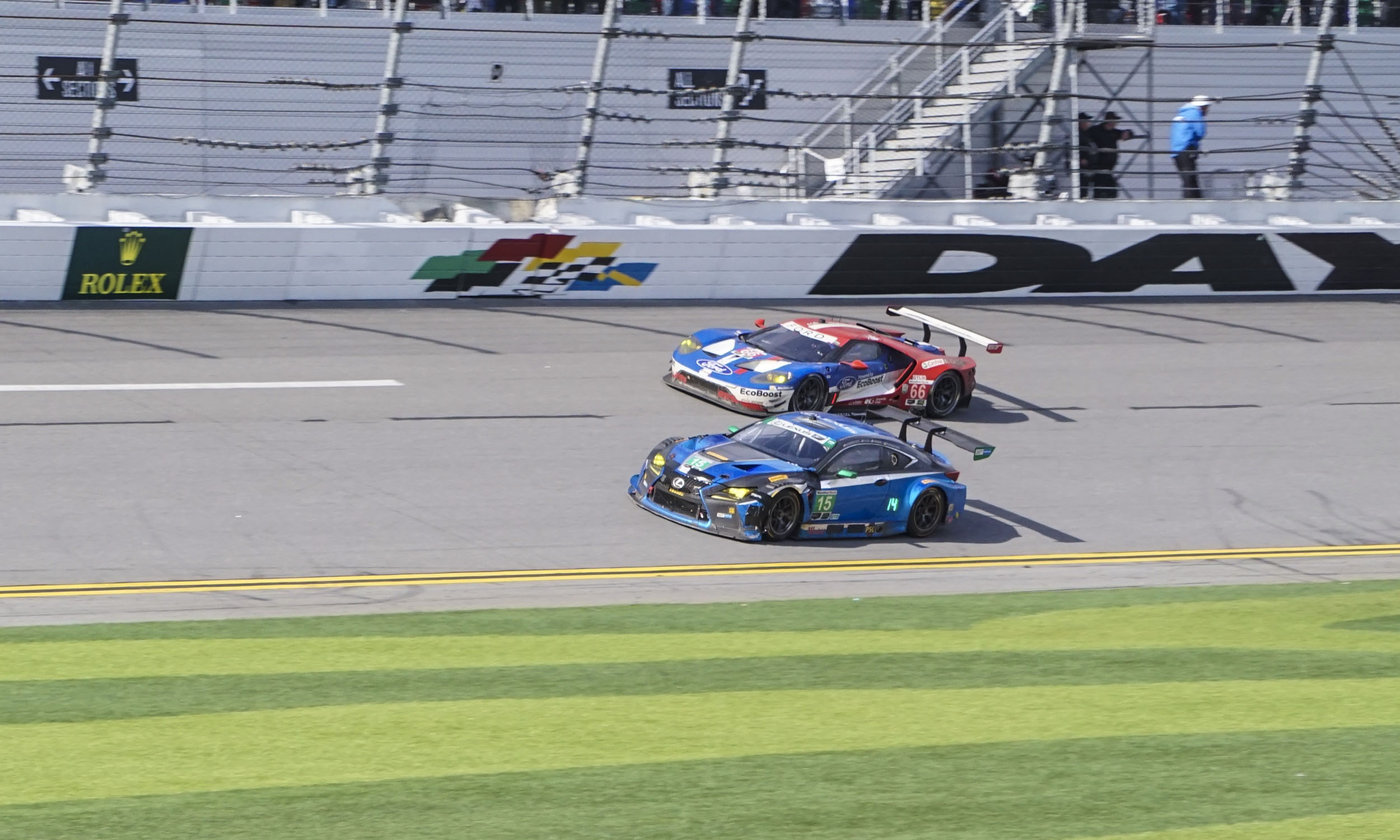 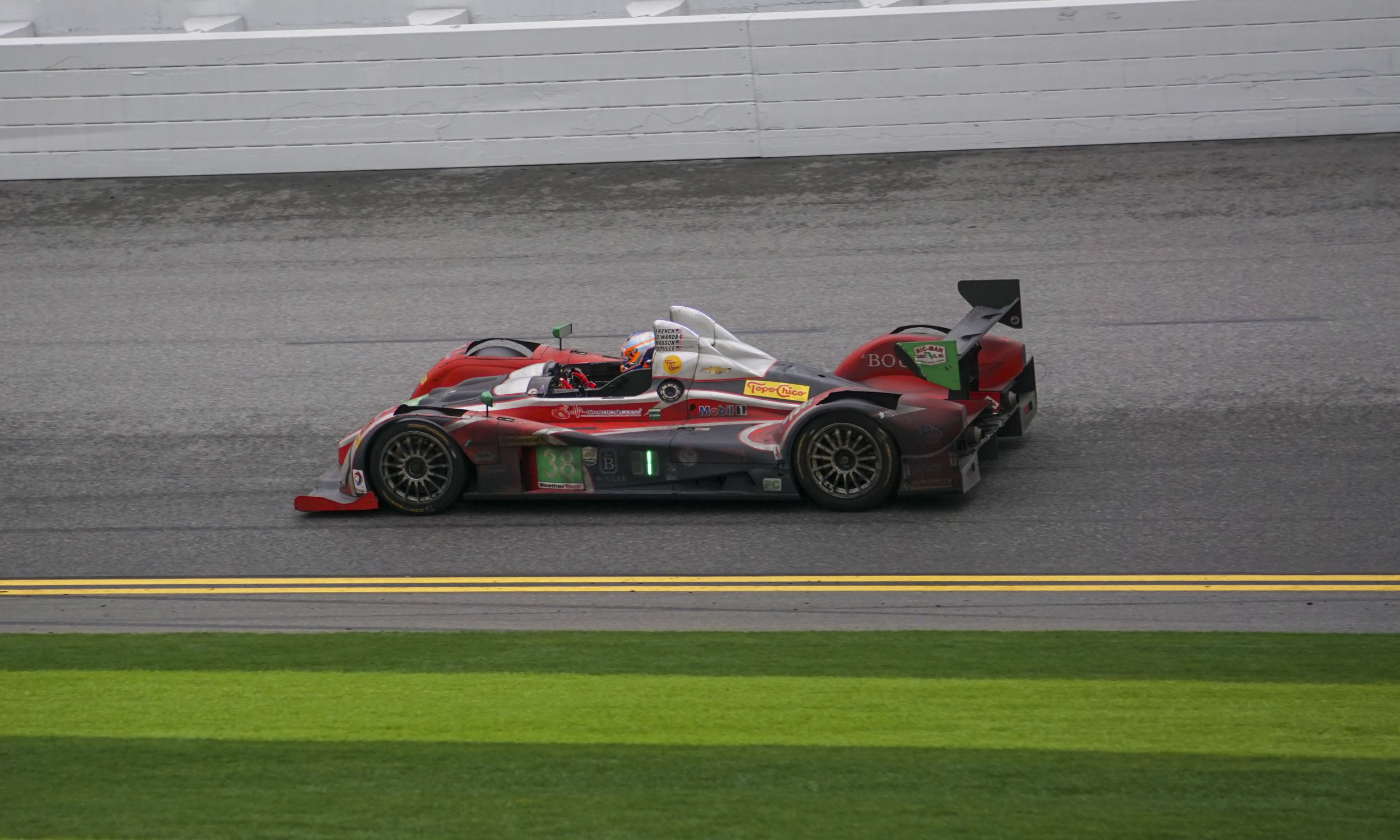 Prototype Challenge
In the second prototype class called Prototype Challenge, the No. 38 Performance Tech ORECA FLM09 dominated the class, finishing 22 laps ahead of the second-place No. 26 BAR1 Motorsports ORECA FLM09. James French, Kyle Masson, Nicholas Boulle and 17-year-old Patricio O’Ward drove the No. 38 to victory, leading the class for the final 514 laps of the race.