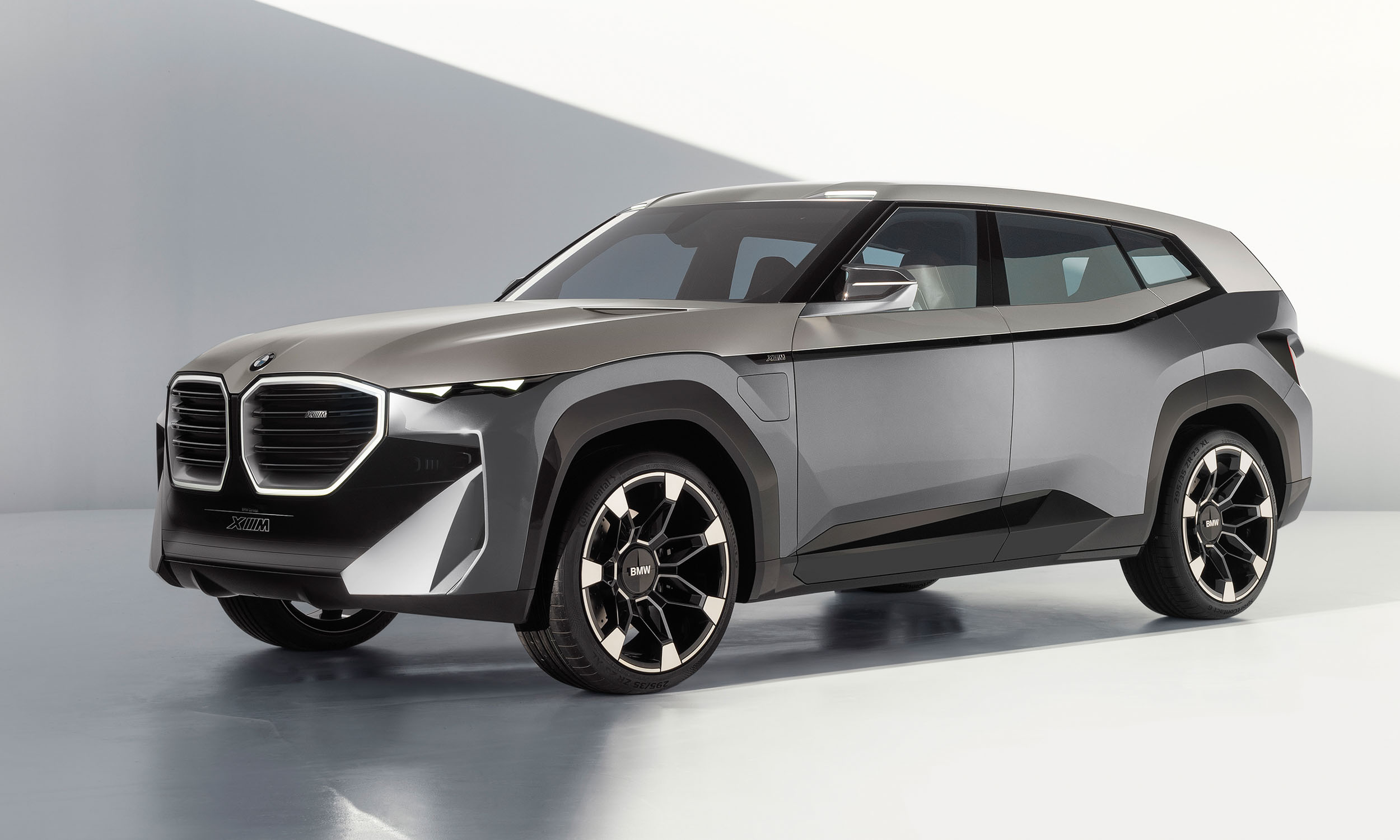 © BMW USA
Future of BMW M
As the 13th letter of the English alphabet, the letter M has multiple meanings. A lowercase m (milli) can represent one thousand, and an uppercase M (mega) can signify one million. In monetary terms, a lowercase m can mean millions, as in $5m for five million dollars. And when it comes to high-performance BMWs, for auto enthusiasts the uppercase letter M represents the fastest, most powerful variants in the German automaker’s lineup. Today BMW provides insight into the future of M versions with the debut of the Concept XM. Not only does the BMW Concept XM boast extreme power, it also showcases the future design of the brand’s luxury X models. 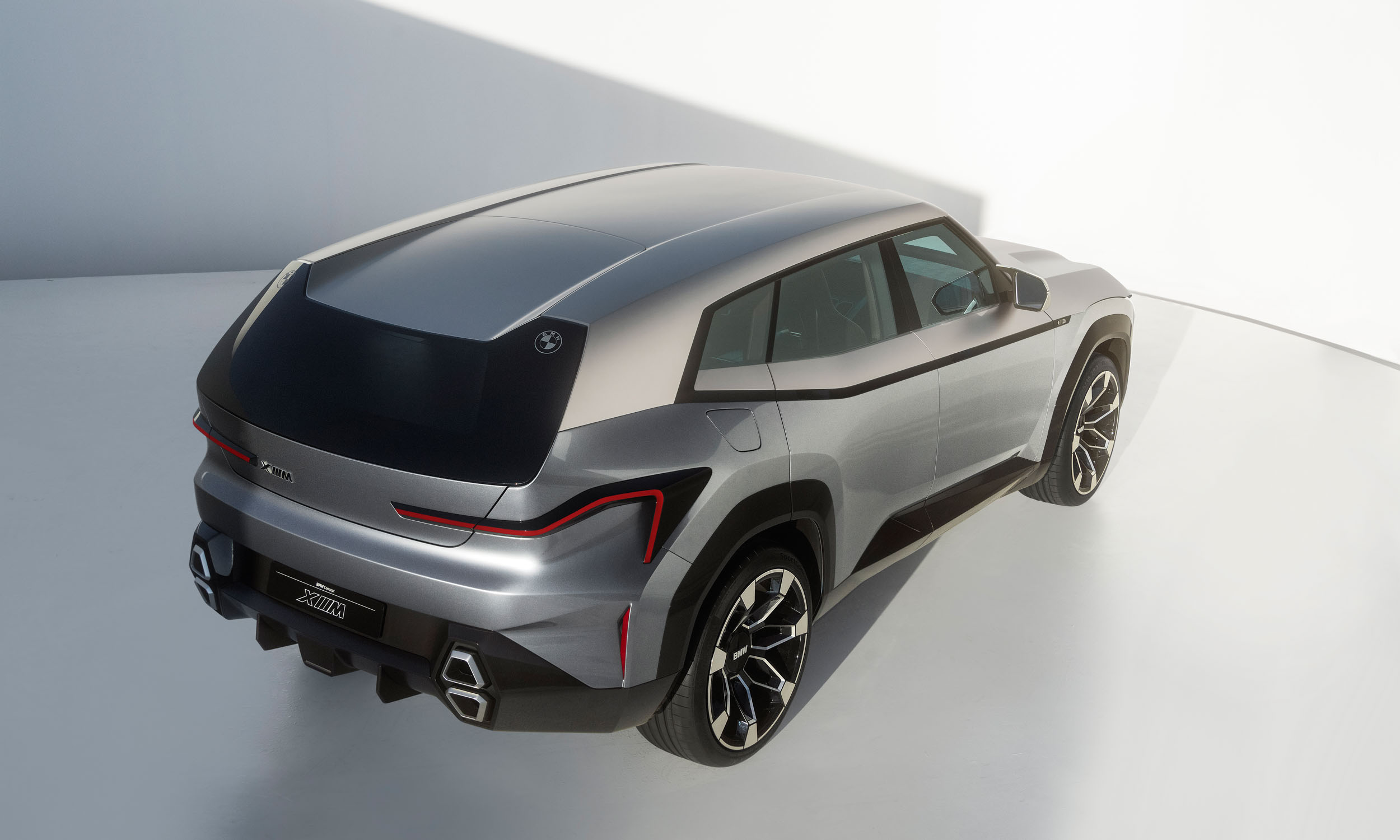 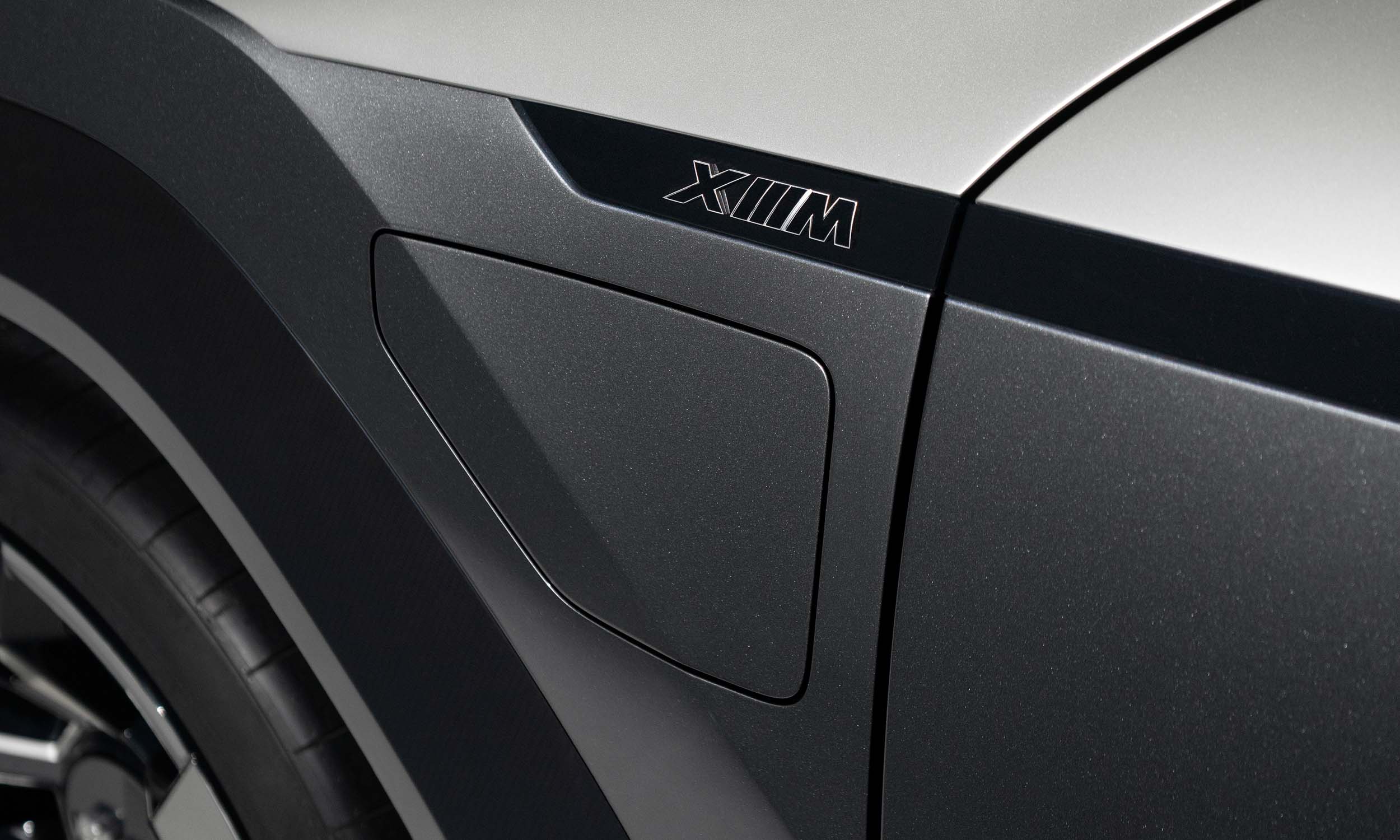 © BMW USA
Standalone M Model
When the production version of the Concept XM arrives in late 2022, it will be the first standalone BMW M model since the legendary BMW M1 of 50 years ago. The XM will also be the most powerful BMW M car ever to go into series production, available exclusively as a plug-in hybrid. 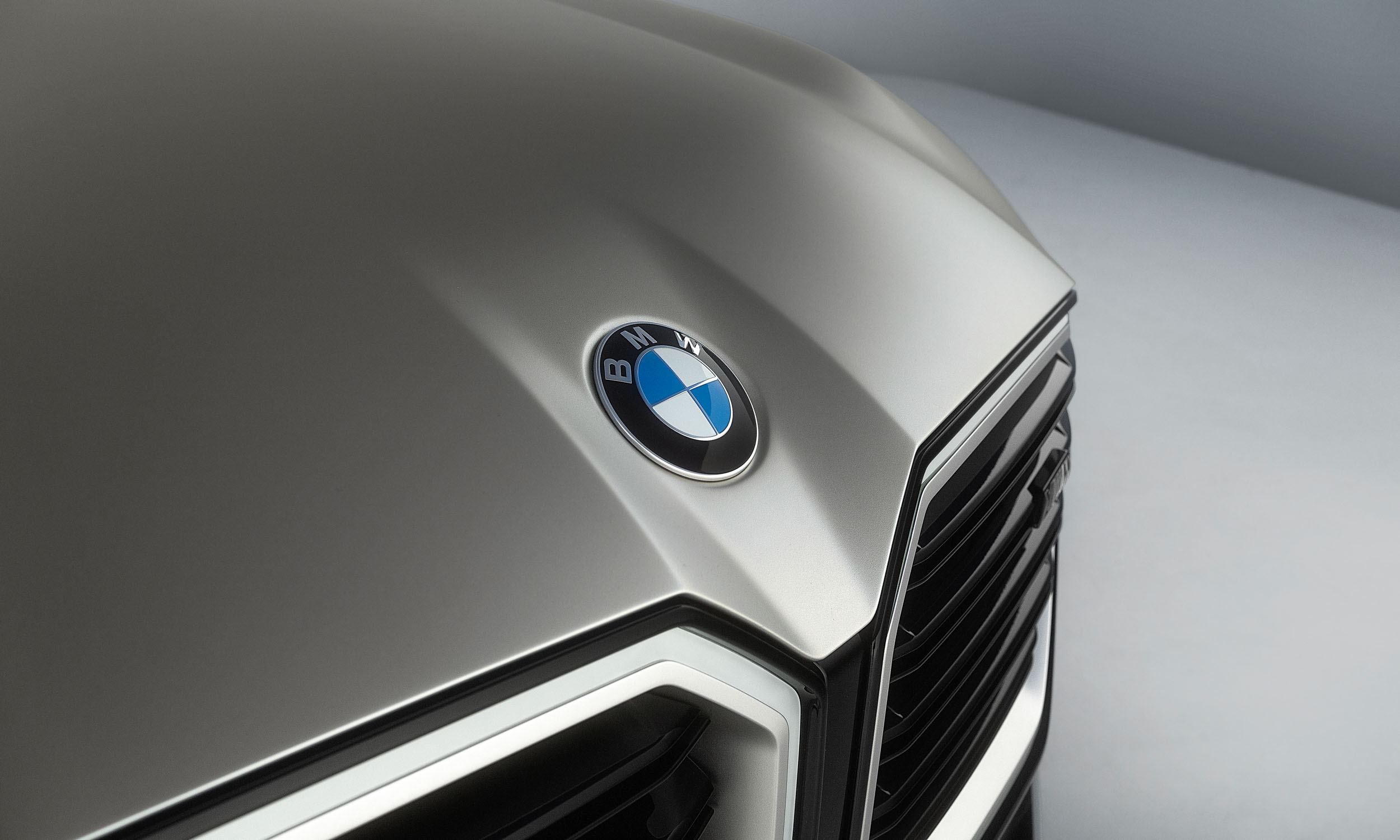 © BMW USA
V8 Hybrid
Powering the Concept XM —and likely the production version as well — is a V8 engine teamed with a high-performance electric motor for a combined output of 750 horsepower and 737 lb-ft of torque. BMW estimates the Concept XM can travel up to 30 miles on electric power alone. The production XM will be the first electrified vehicle in the BMW M lineup — and most certainly will not be the last. 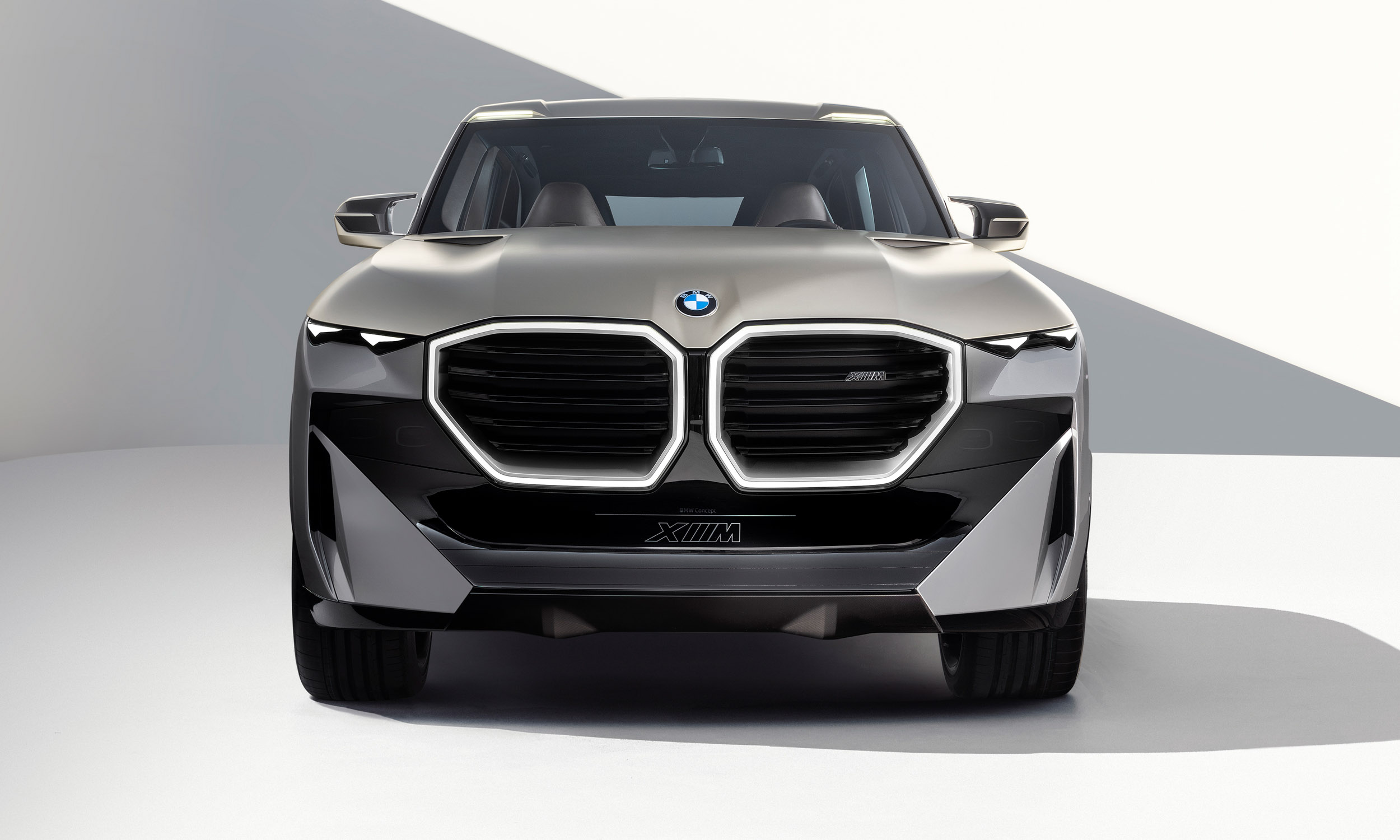 © BMW USA
The Face of BMW
Automotive designers, pundits and enthusiasts have regularly weighed in online regarding the large kidney grille of the latest BMWs — not all of it positive. That said, based on the look of the Concept XM the German automaker has no plans to shy away from this trend. The front end of the Concept XM gets dominated by a large kidney grille that features M-style double bars that add depth to the space. Extremely slim running lights and headlights hidden behind dark glass make the grille look proportionately even larger. 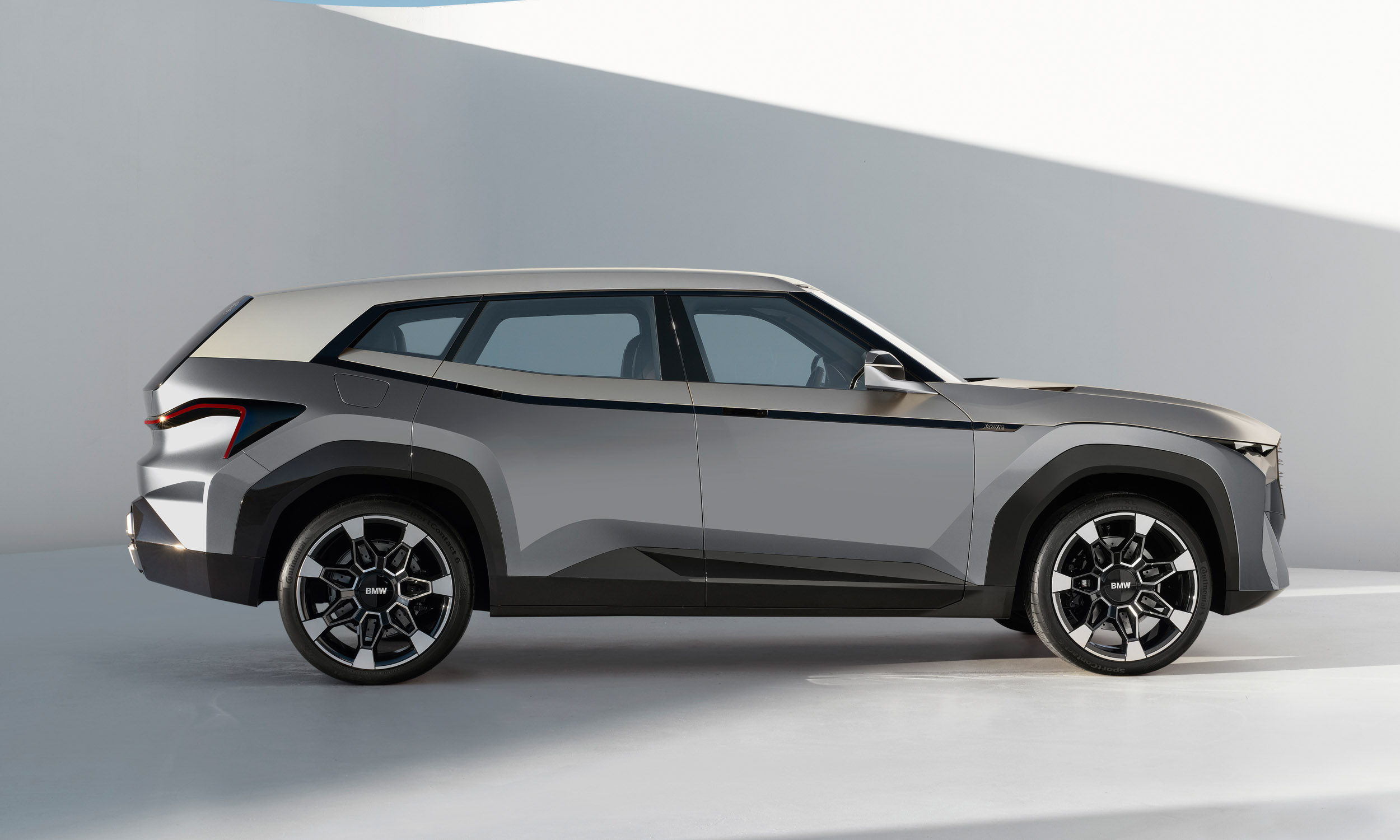 © BMW USA
Performance Silhouette
Clearly still an SUV, the Concept XM is BMW’s futuristic take on the X model, giving it a much sportier stance. Character lines flow upward from the front of the vehicle and complement the rear-sloping roof to give the concept the appearance of forward motion. Large fender flares and stylish 23-inch wheels complete the look. 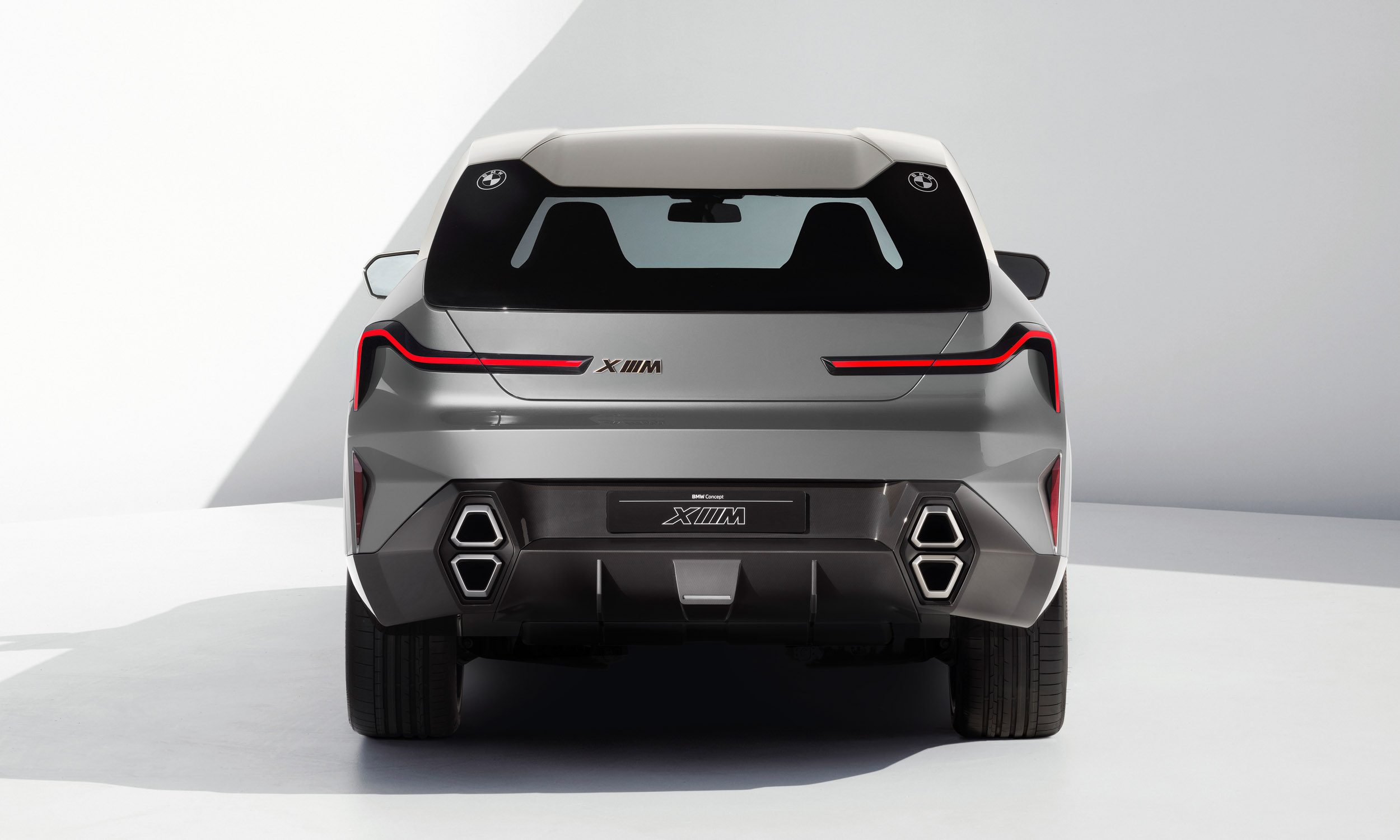 © BMW USA
Rear View
Slim LED taillights span almost the entire rear width of the BMW Concept XM, wrapping around the corners and accentuating the concept’s flared fenders, providing an indication of the Concept XM’s high-performance attributes. Lights go completely black when not in use for a stealthy, sporty effect. As with other M models, the Concept XM features quad exhaust outlets, although the Concept XM’s stand out due to their vertical arrangement and hexagonal shape. 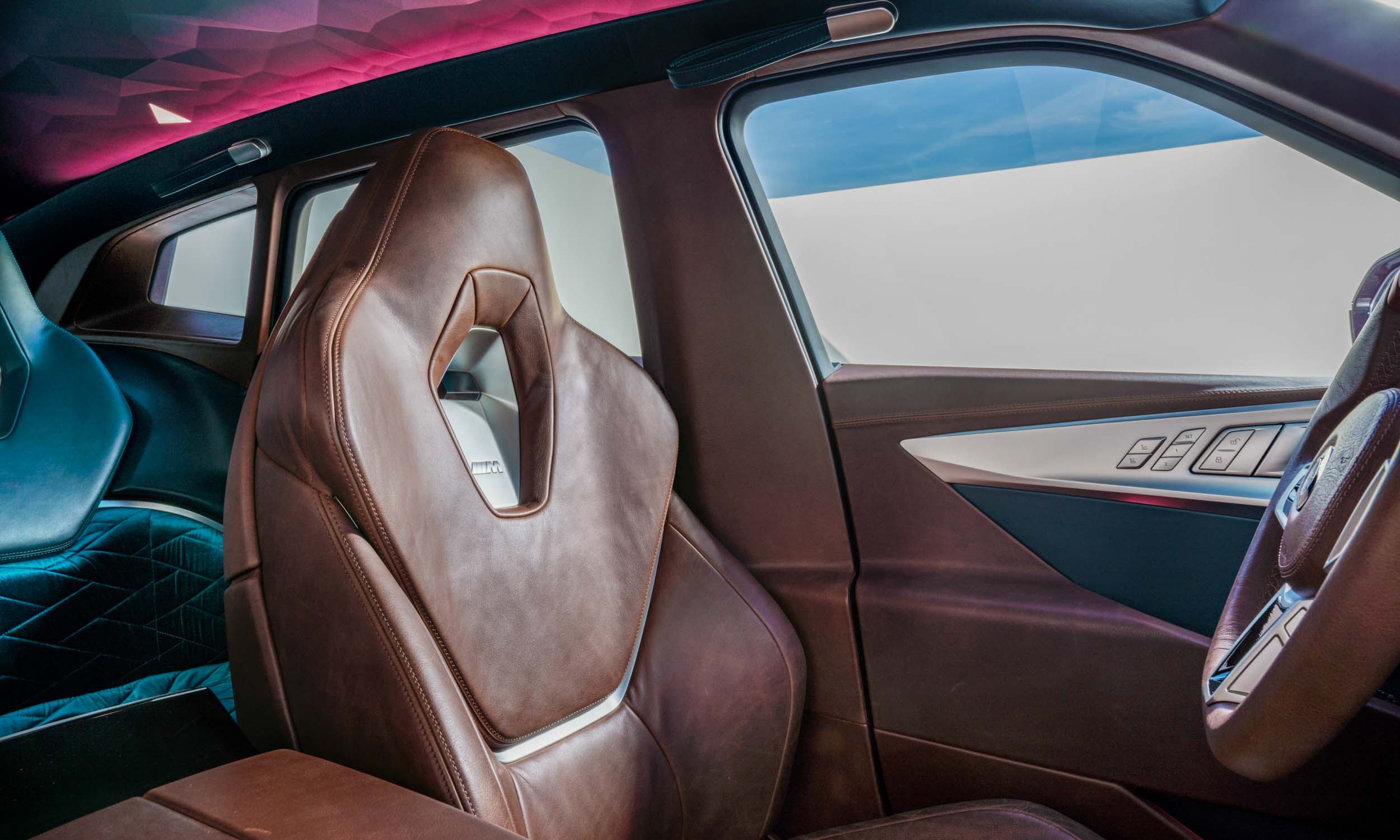 © BMW USA
Luxury and Performance
As expected from a BMW M variant, the Concept XM features an interior replete with high-end materials. Seats, doors and dashboard are swathed in vintage-looking brown leather with copper and carbon fiber trim — a sophisticated blending of luxury with performance. 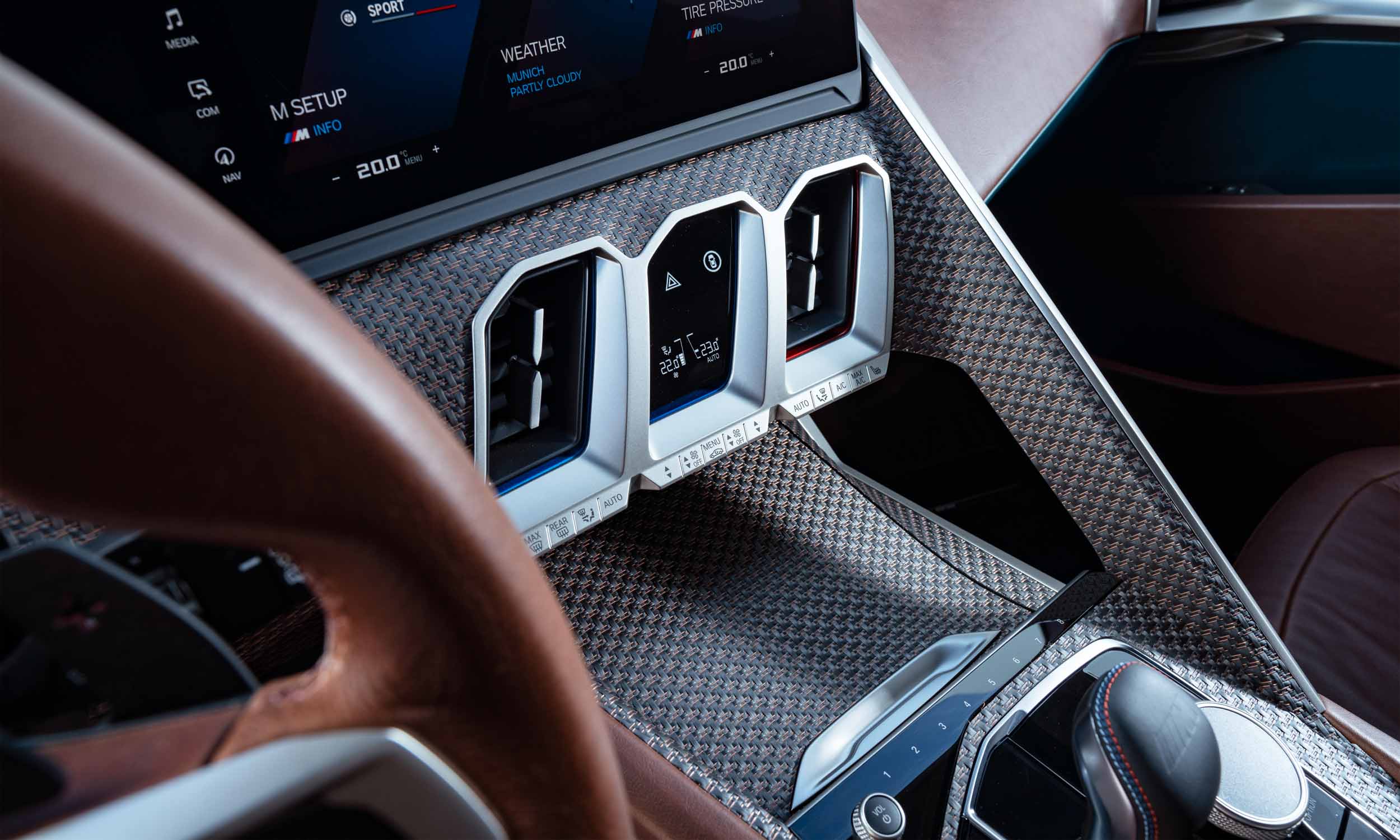 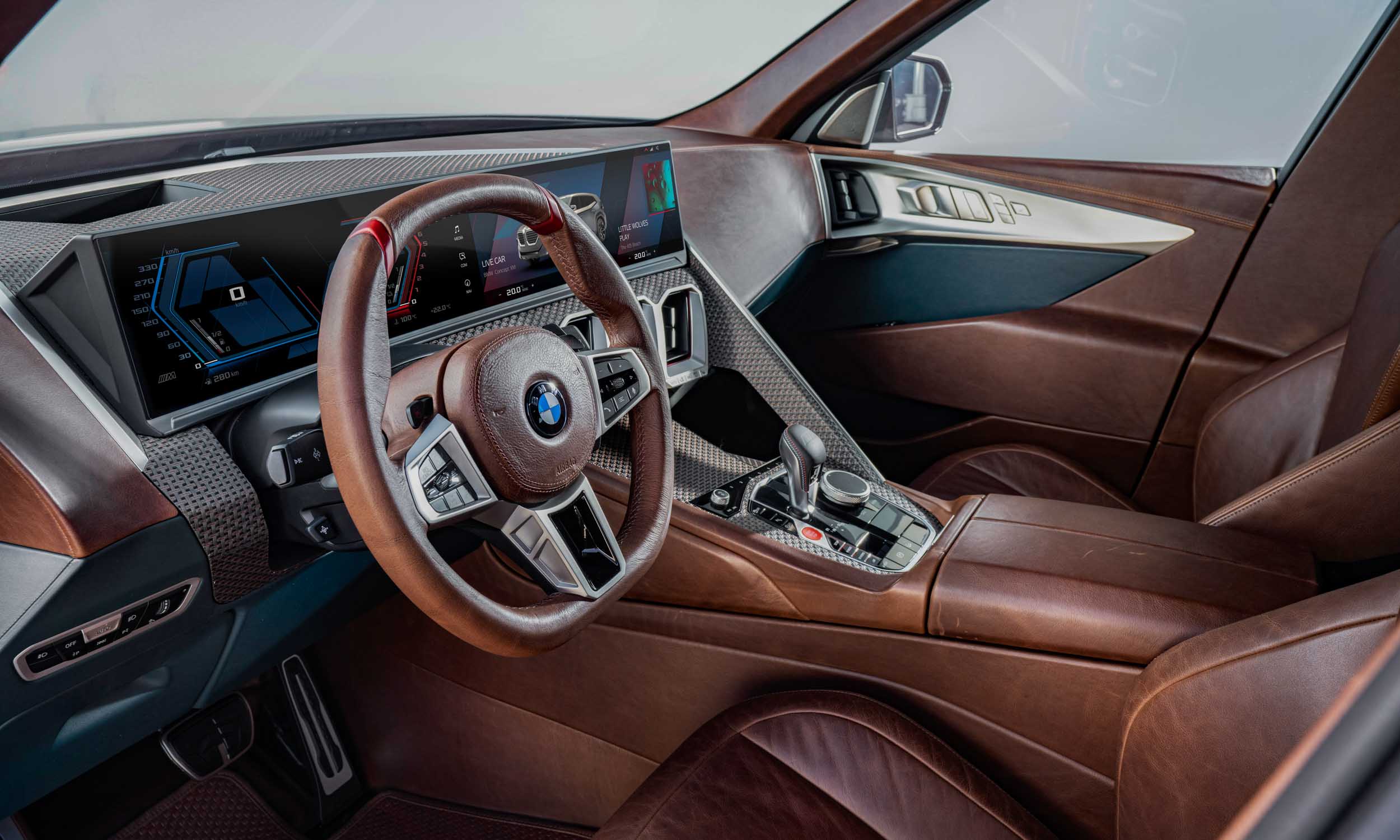 © BMW USA
High Tech
The Concept XM features the advanced BMW Curved Display, which merges infotainment and driver information into one large screen. Controls are kept simple with most system interactions accomplished via the latest version of BMW iDrive as well as steering wheel controls and voice control. Ambient lighting adds to the concept’s high-tech vibe, and it can be activated in the three BMW M colors. 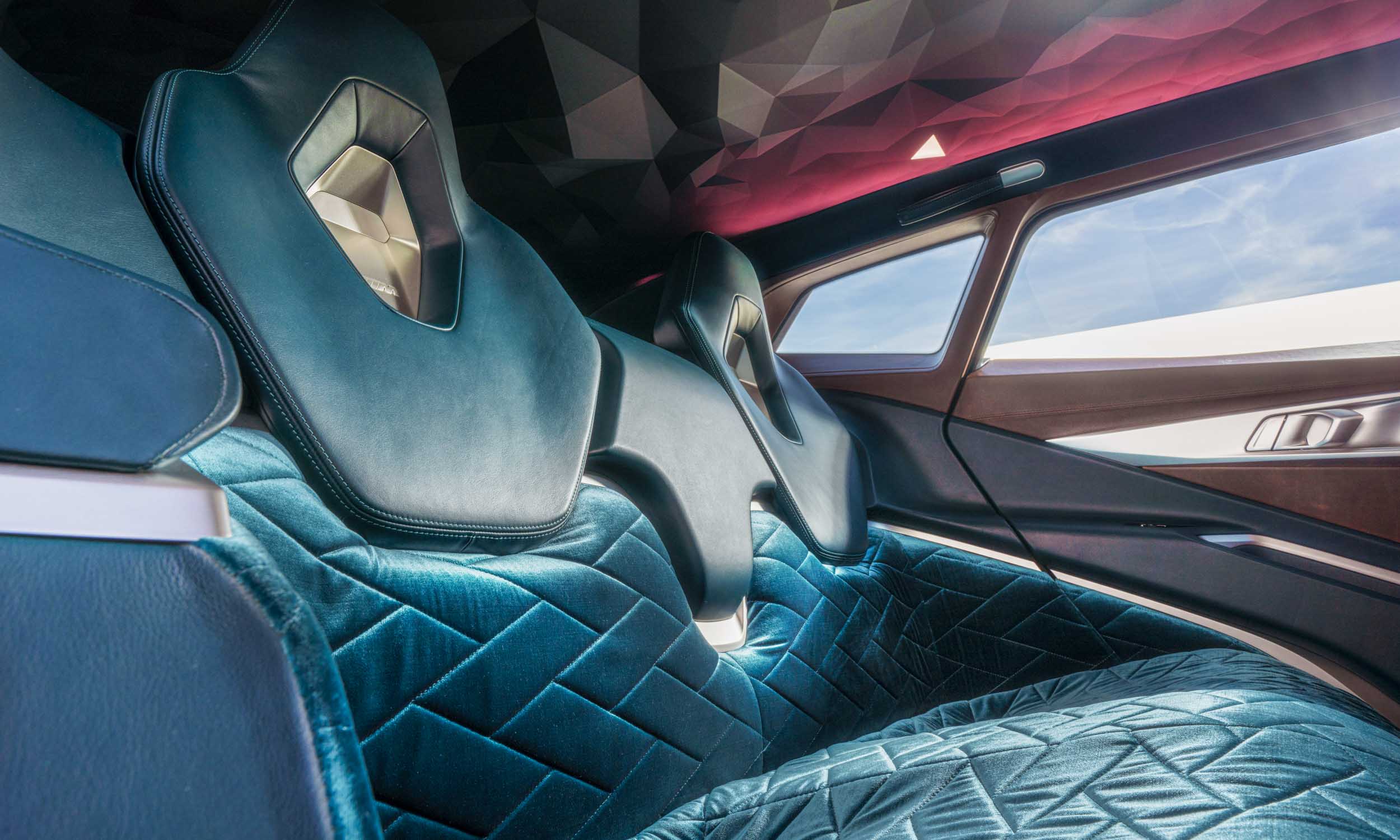 © BMW USA
M Lounge
Even though the driver’s seat remains the prime place in a BMW M vehicle, the XM Concept features a luxurious rear seat that the company refers to as the M Lounge. The rear seats are a deep aquamarine color called Petrol, trimmed with a combination of leather and luxurious velvet upholstery with diamond quilting. 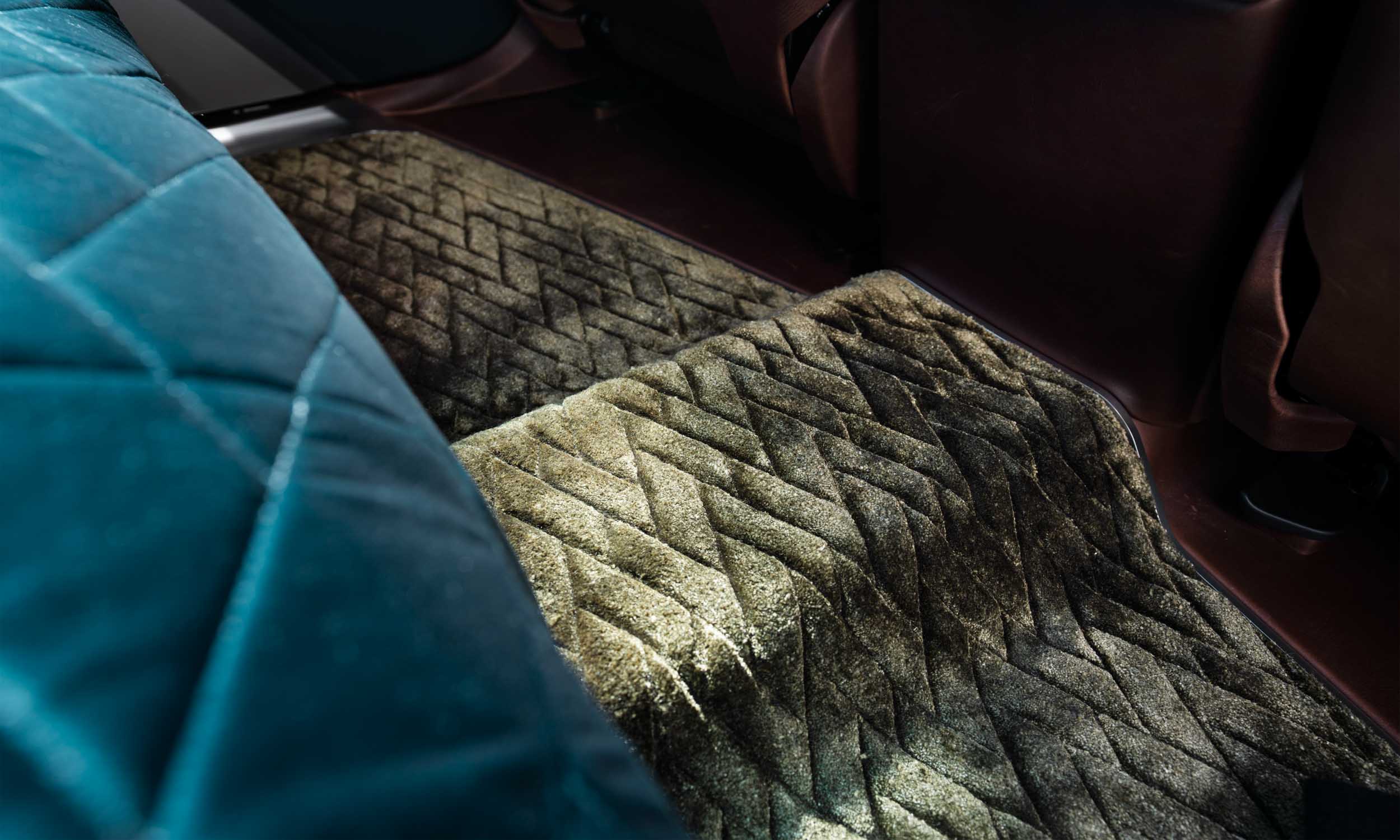 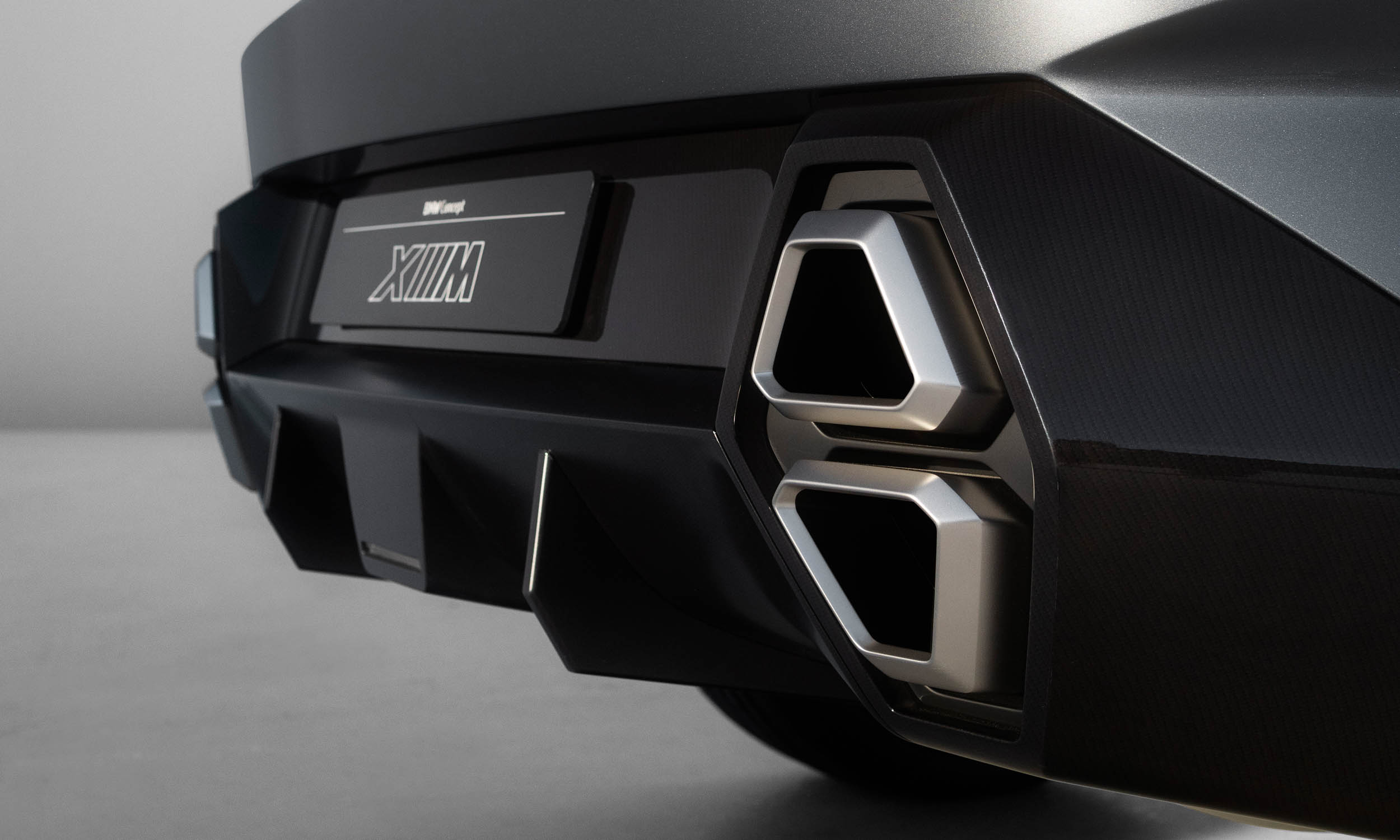 © BMW USA
Coming in 2022
BMW plans to produce the production version of the Concept XM at the company’s manufacturing facilities in Spartanburg, South Carolina. Production is slated to begin in late 2022.