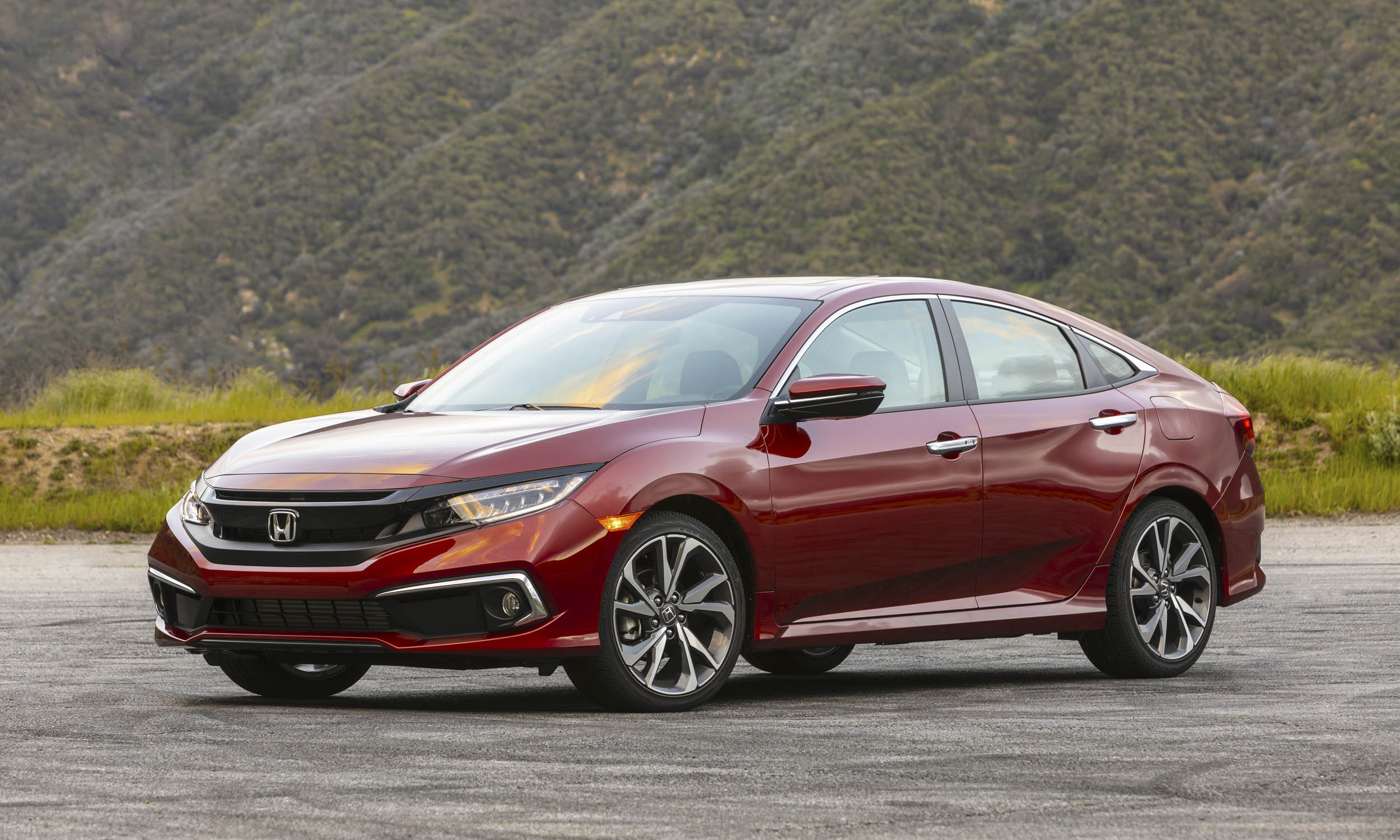 Best-Selling Cars Less Than $25,000
Overall auto sales for calendar 2020 are down in the U.S. due to COVID-19, although some models continue to post positive numbers. Here we take a look at the more attainable models — the best-selling cars in America with starting prices below $25,000. Some manufacturers no longer report monthly sales and only report quarterly numbers, so this list is based on sales reported at the end of the last quarter, ending June 2020. What follows are the best-selling cars of 2020 during the first half of the year — with a starting price below $25,000 — according to numbers compiled from individual auto manufacturers’ sales reports. 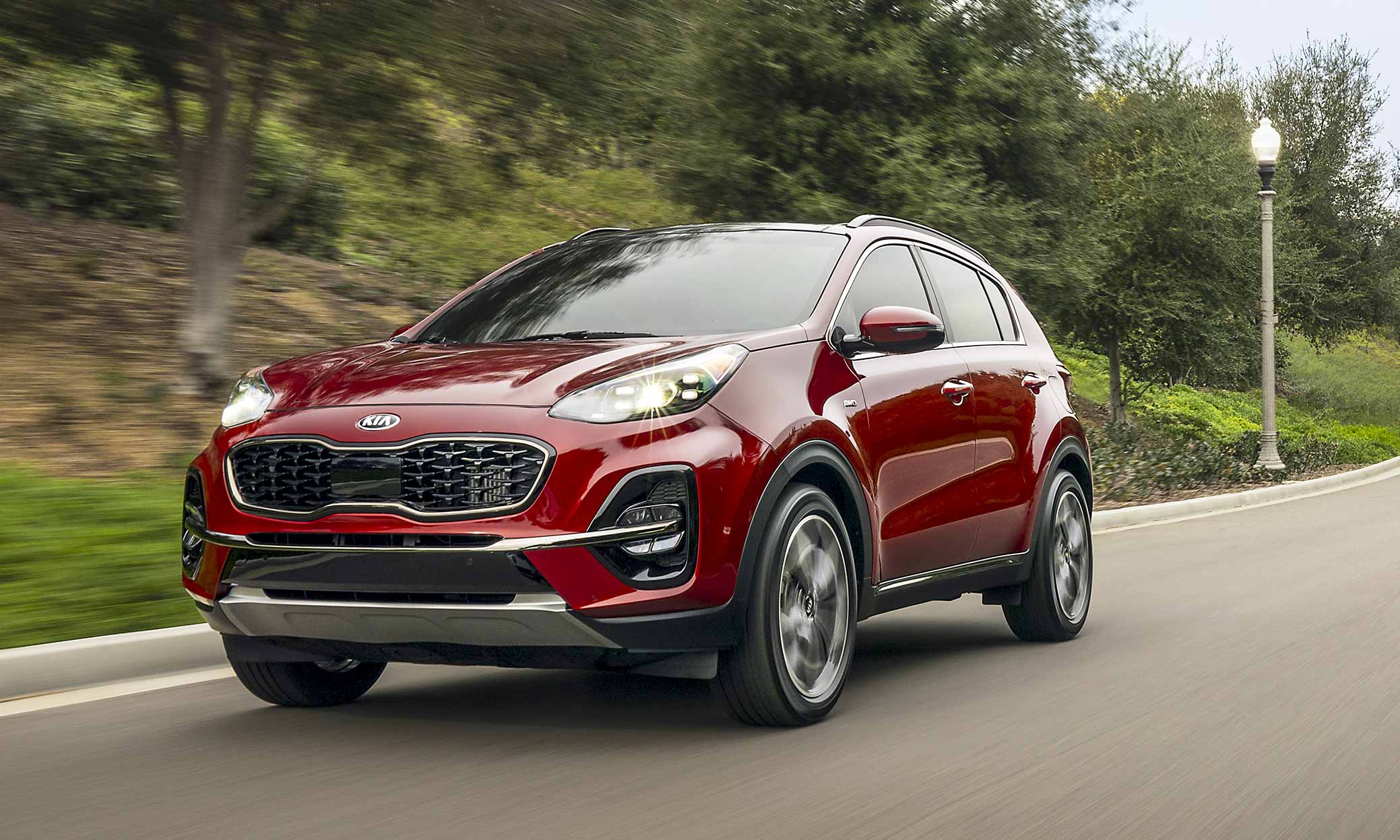 20. Kia Sportage
2020 Sales: 39,618
Starting MSRP: $23,990
Kia’s compact crossover SUV, Sportage has been one of the Korean automaker’s top-selling models in the U.S. market for many years, and it has been updated for the 2020 model year. The redesigned Sportage has a more aggressive exterior including new headlights with available LED turn indicators, redesigned projector-beam fog lights, available LED headlights with available LED fog lights, as well as a new grille, front bumper and wheel designs. At the rear, the 2020 Sportage features new taillight trim, rear bumper and exhaust tip designs. 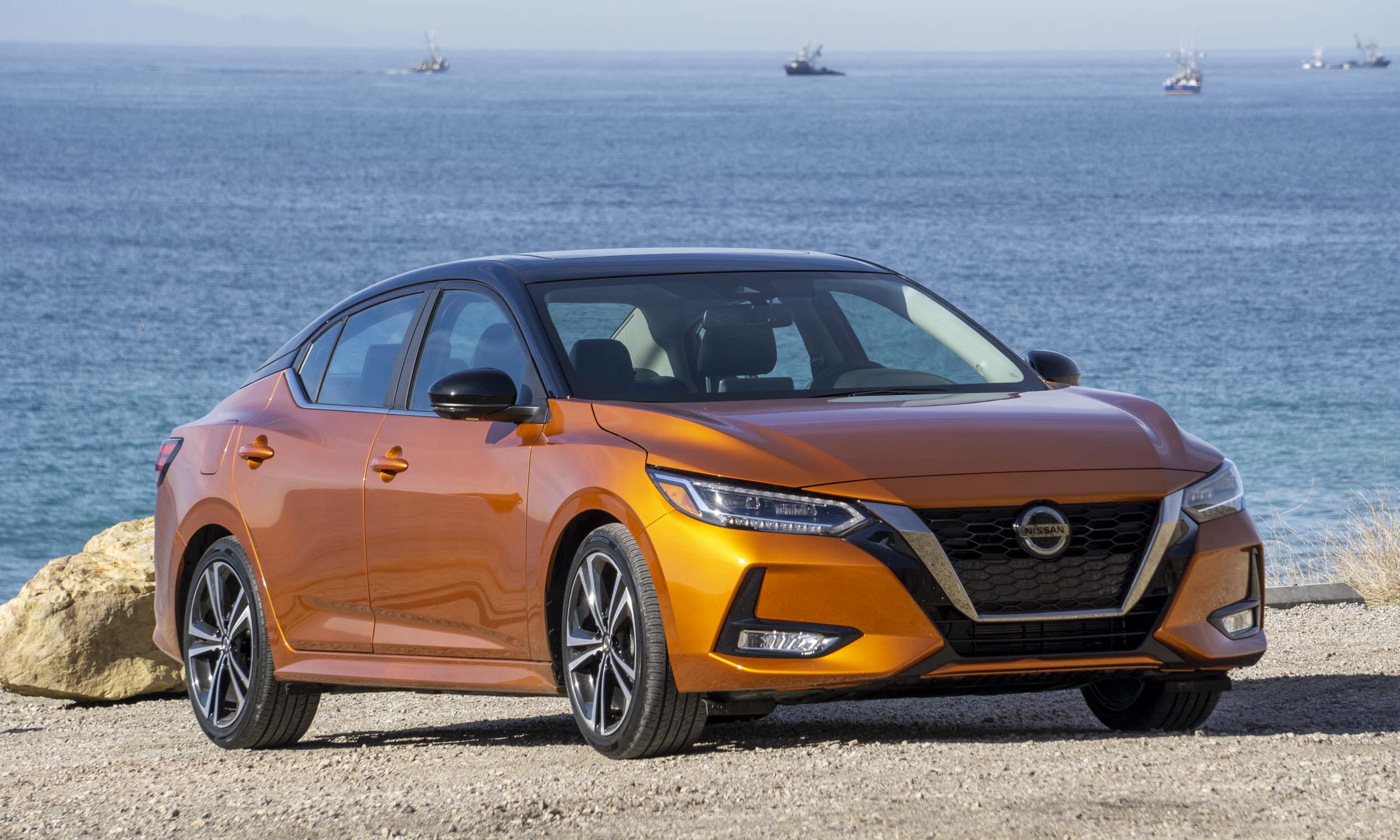 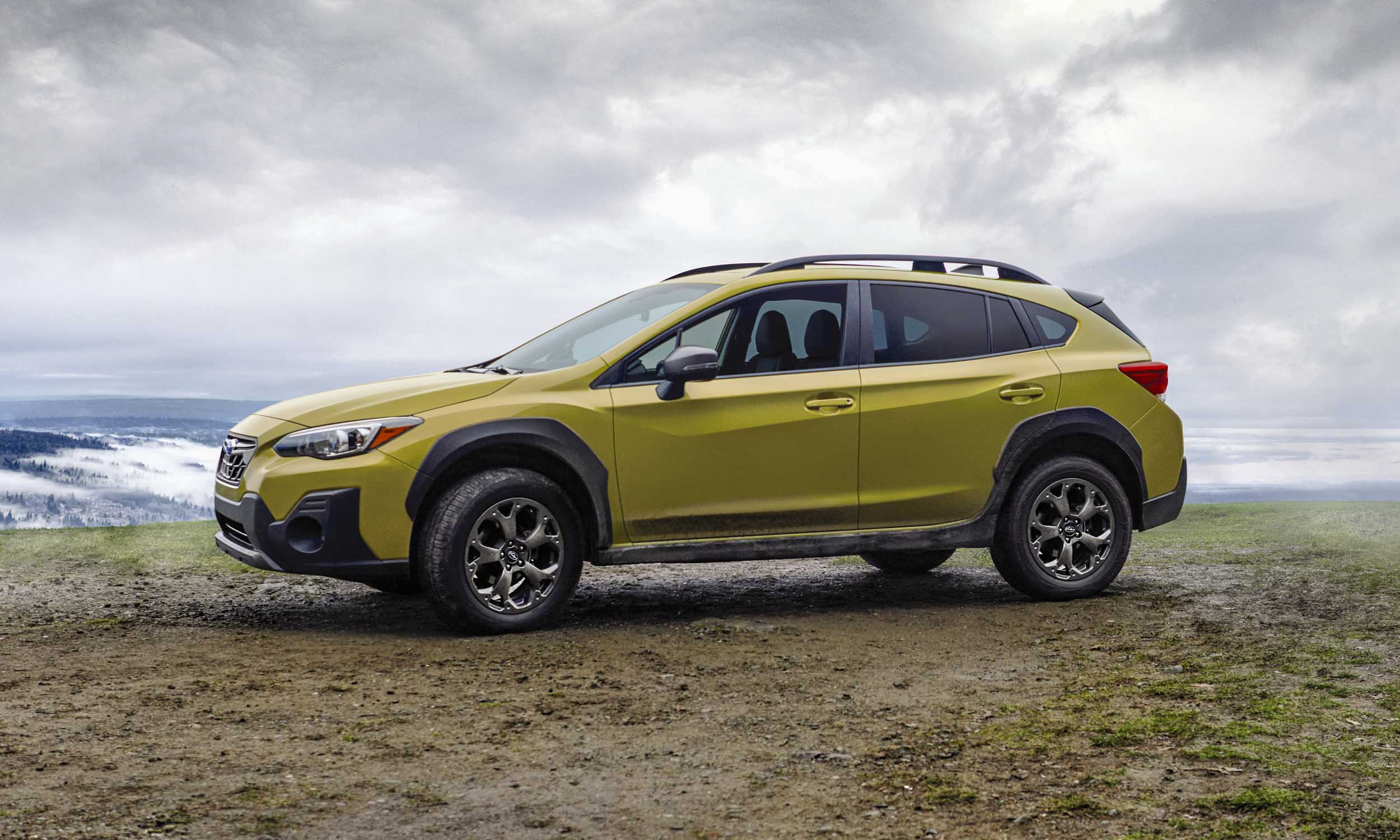 18. Subaru Crosstrek
2020 Sales: 45,732
Starting MSRP: $22,245
Subaru’s popular compact crossover has been updated for the 2021 model year after an extensive makeover for 2018. The new Sport trim level adds more aggressive styling; unique wheel arch moldings; 17-inch alloy wheels with a dark gray finish; and a gunmetal gray treatment for the grille, side mirrors and badges. For 2021 the Limited and Sport trim levels are powered by a new a 2.5-liter 4-cylinder engine that produces 182 horsepower and 176 lb-ft of torque. 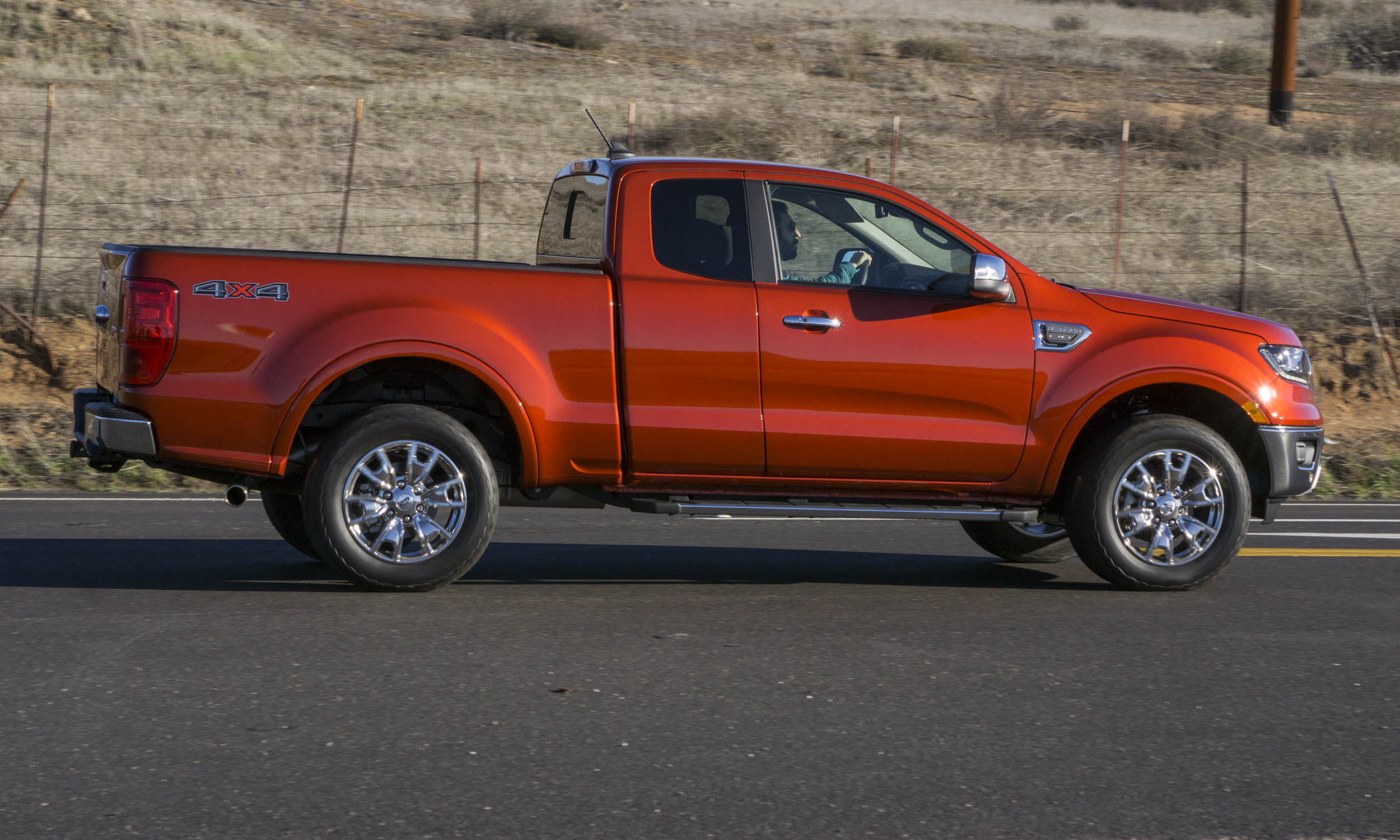 17. Ford Ranger
2020 Sales: 45,988
Starting MSRP: $24,410
Ford returned to the midsize truck market with the all-new 2019 Ranger, offered in three trim levels: XL, XLT and Lariat. Ranger comes in two body styles, SuperCab and Super Crew, with either 2WD or 4WD. All Rangers are powered by a 2.3-liter EcoBoost 4-cylinder engine that produces 270 horsepower and 310 lb-ft of torque. The SuperCrew is a proper 5-passenger vehicle with easy access to rear seats that offer a surprising amount of legroom and headroom. The rear seat bottom can be folded, providing access to additional underseat storage. 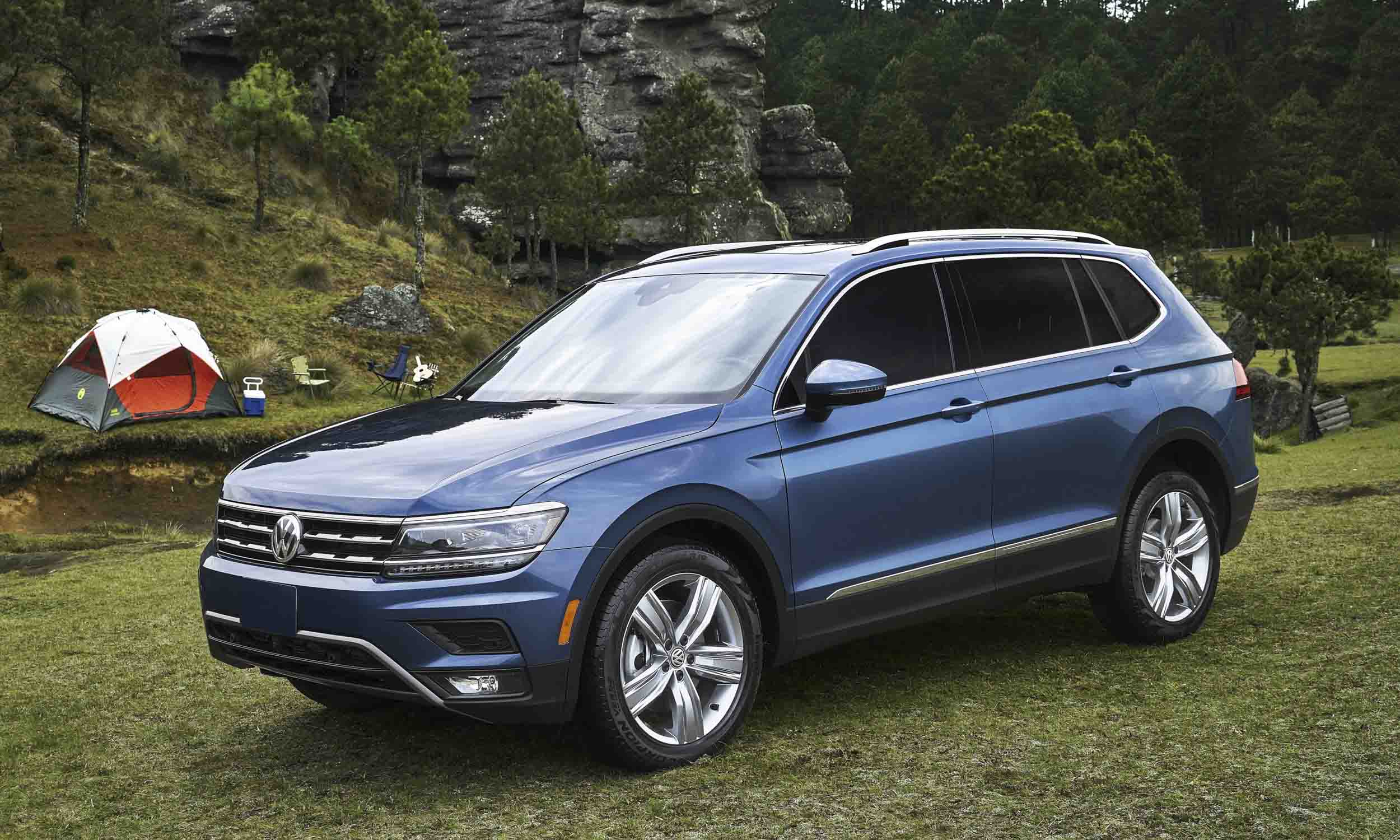 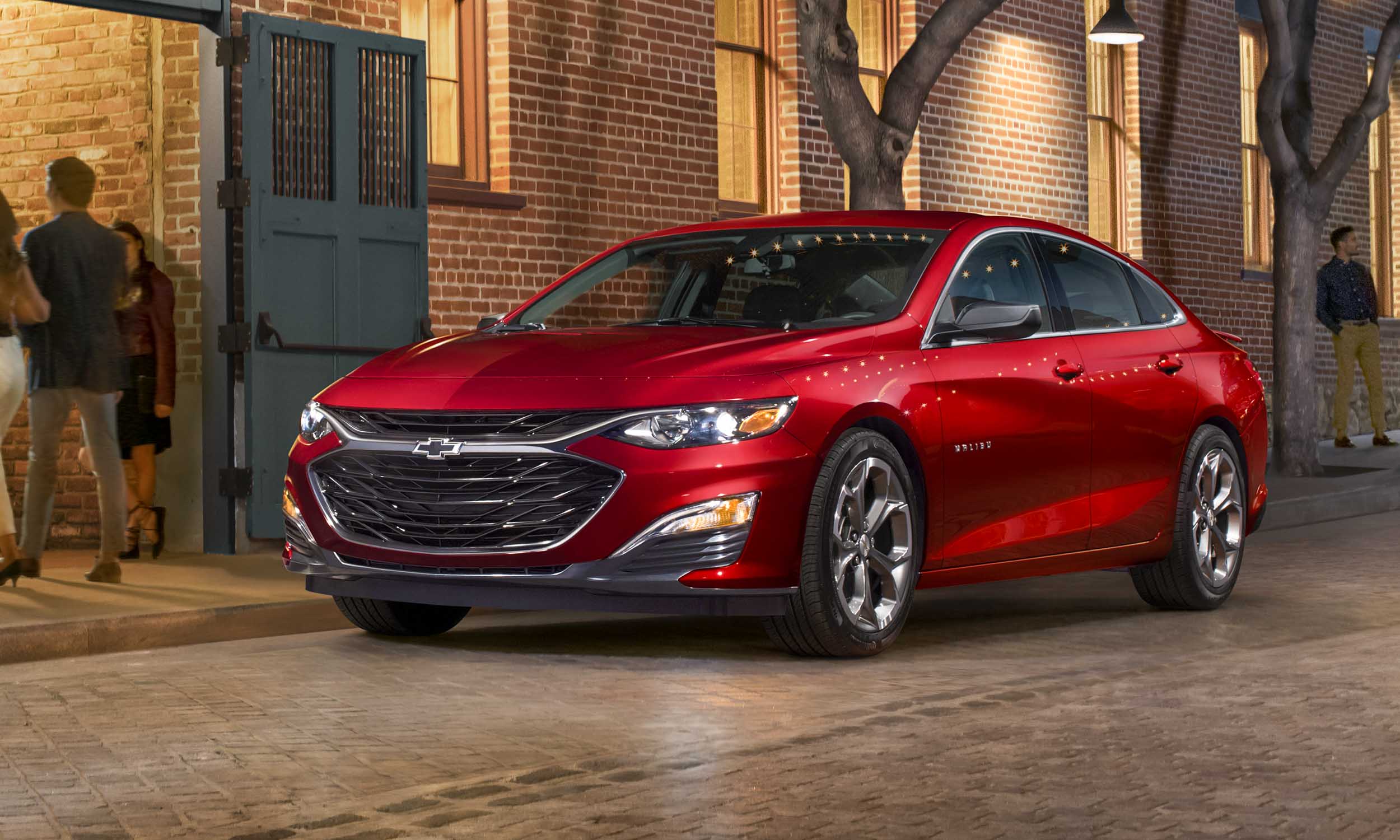 15. Chevrolet Malibu
2020 Sales: 47,944
Starting MSRP: $22,140
Chevrolet’s midsize sedan, Malibu first debuted in 1964 as the top variant of the Chevrolet Chevelle, offering the combination of a sporty design and a high level of standard equipment. Popular right from the start, the new model sold 200,000 units in its first year, offered in four body styles. After four generations Malibu took a break, returning in 1997 as a front-wheel-drive sedan. For 2019 Chevrolet gave the Malibu fresh styling, a range of upgraded features and introduced the Malibu RS, which stands out with a black sport grille, black bowtie emblems, a rear spoiler, dual exhaust and 18-inch machined wheels. 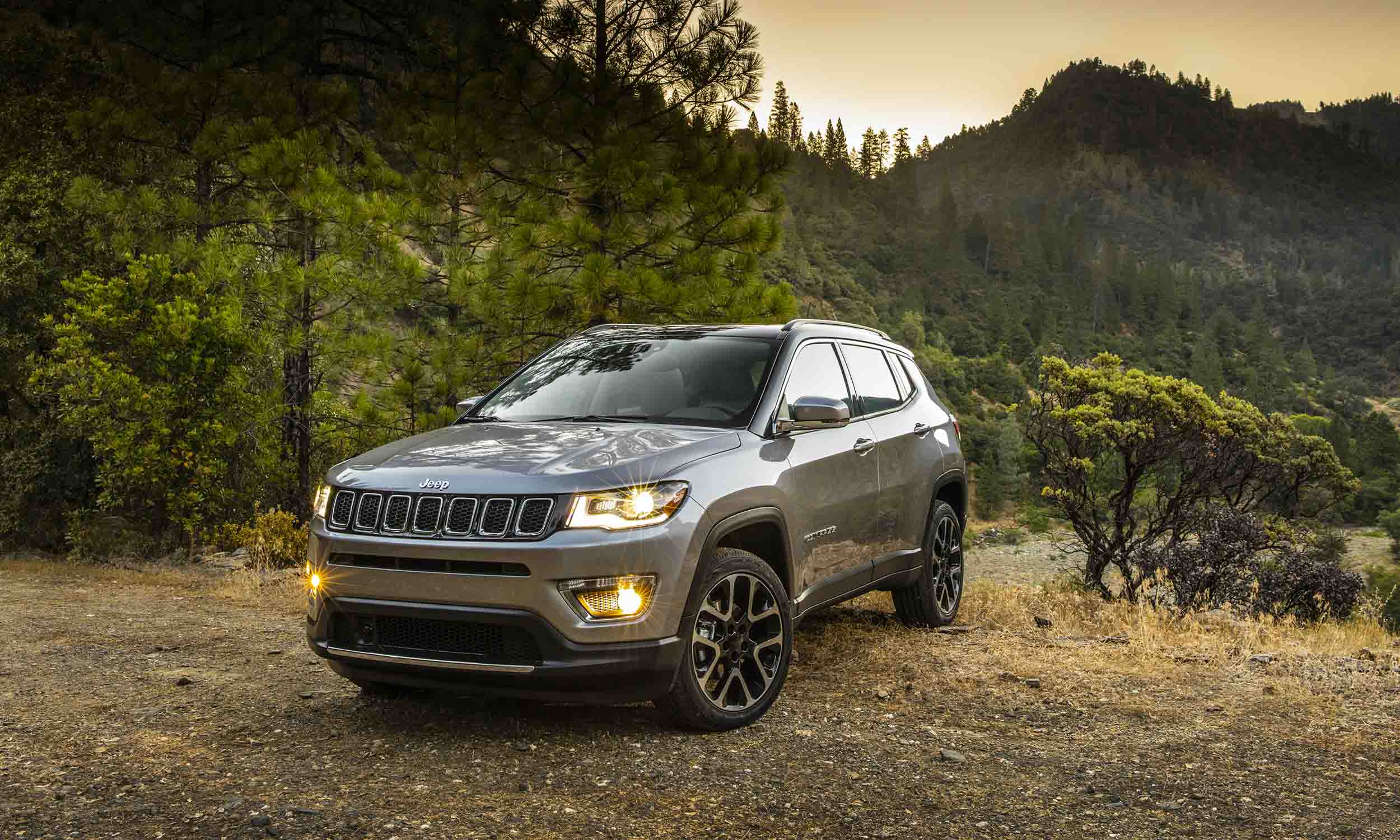 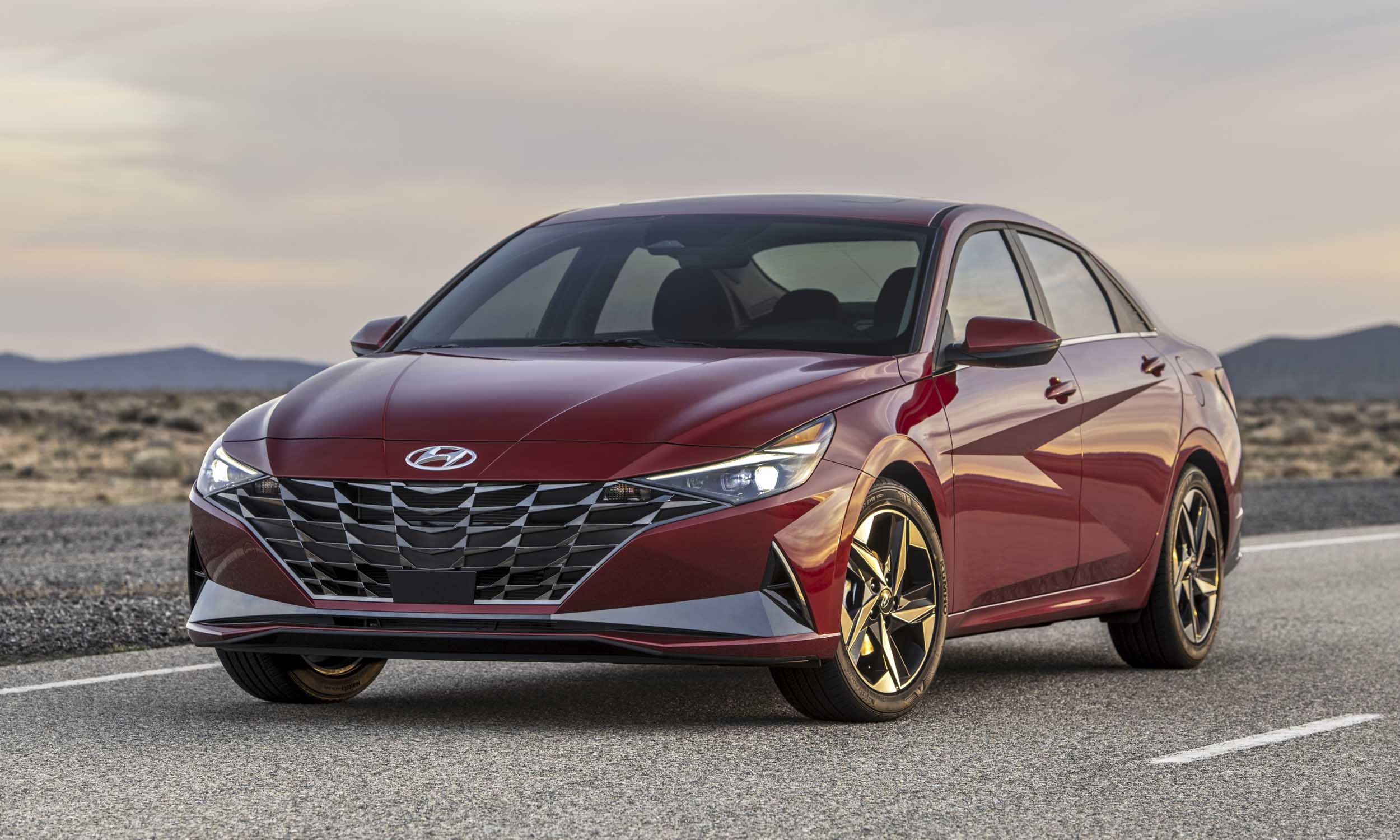 13. Hyundai Elantra
2020 Sales: 48,450
Starting MSRP: $19,300
The Elantra has been in America since 1992, and for 2021 the sedan moves into its seventh generation with a longer wheelbase, wider stance and lower roofline for a premium look similar to the midsize Sonata. Scheduled to go on sale in fall 2020, the new Elantra is clearly distinguishable from previous generations thanks to a new wide grille that integrates with headlights and turn signals. A long, low hood adds to the sporty coupelike silhouette. At the rear are new LED taillights that have a thin line of light connecting them. For 2021 Elantra will be offered as a hybrid for the first time, sporting a 1.6-liter gas engine combined with an electric motor for a combined 139 horsepower and 195 lb-ft of torque. Power gets delivered through a 6-speed dual-clutch transmission and combined fuel economy is expected to top 50 mpg. 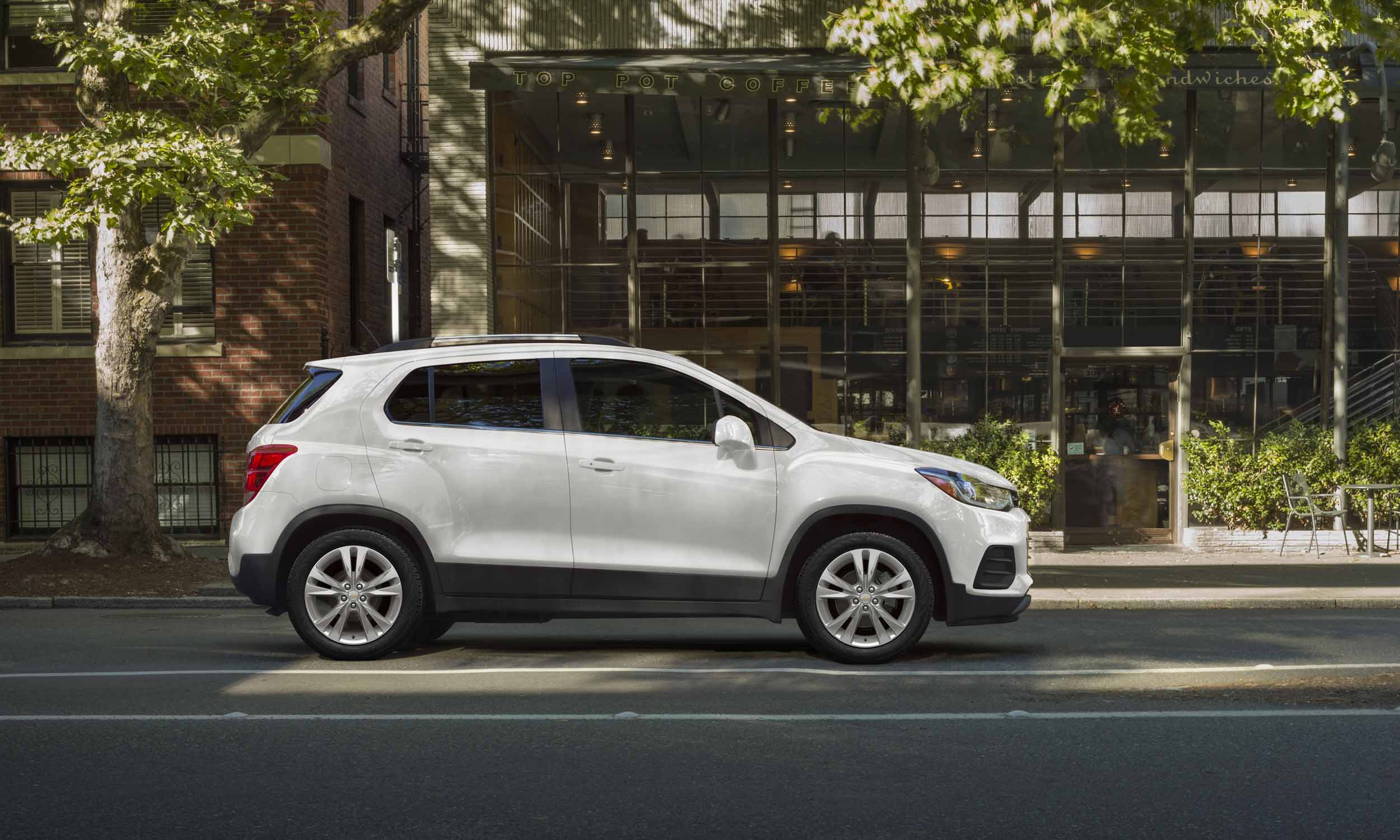 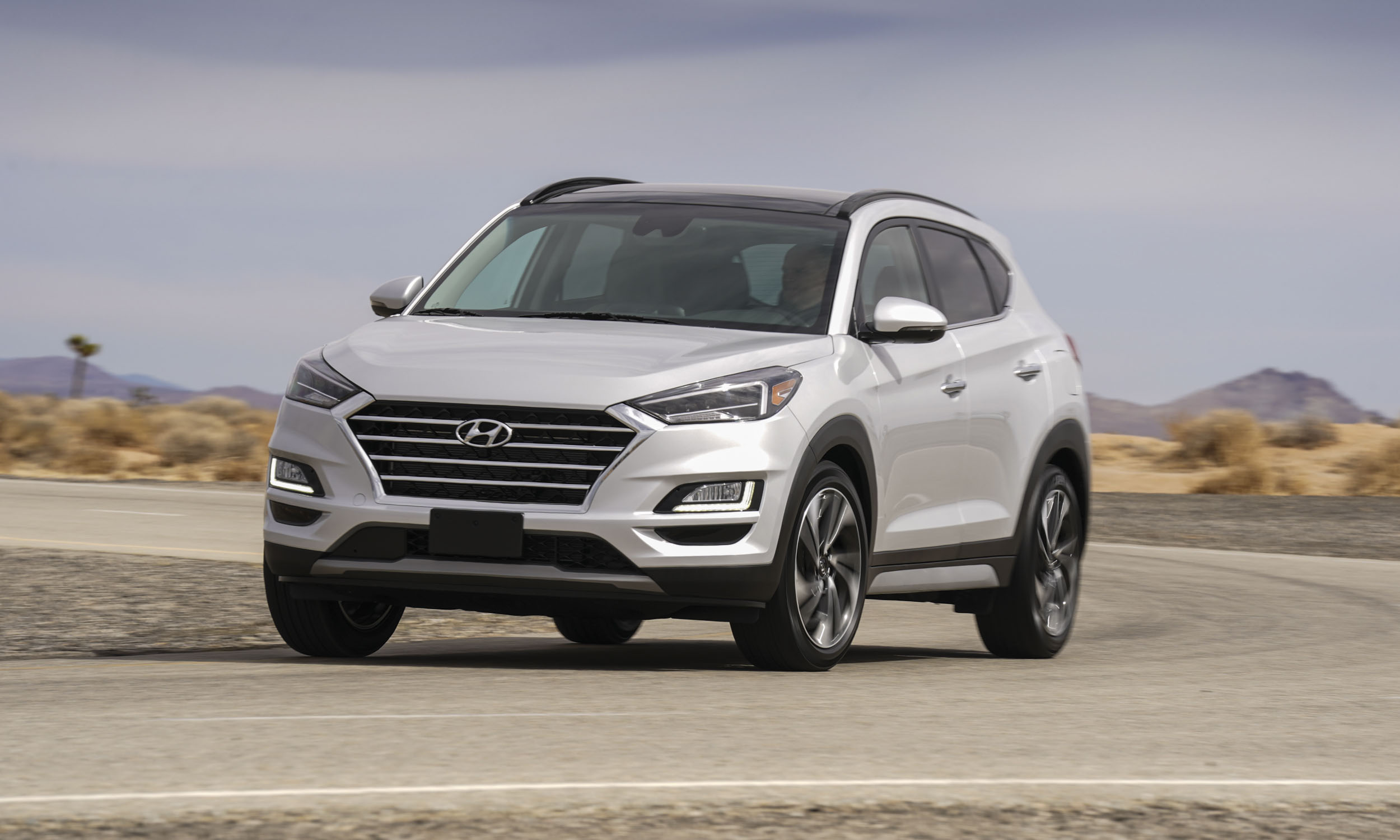 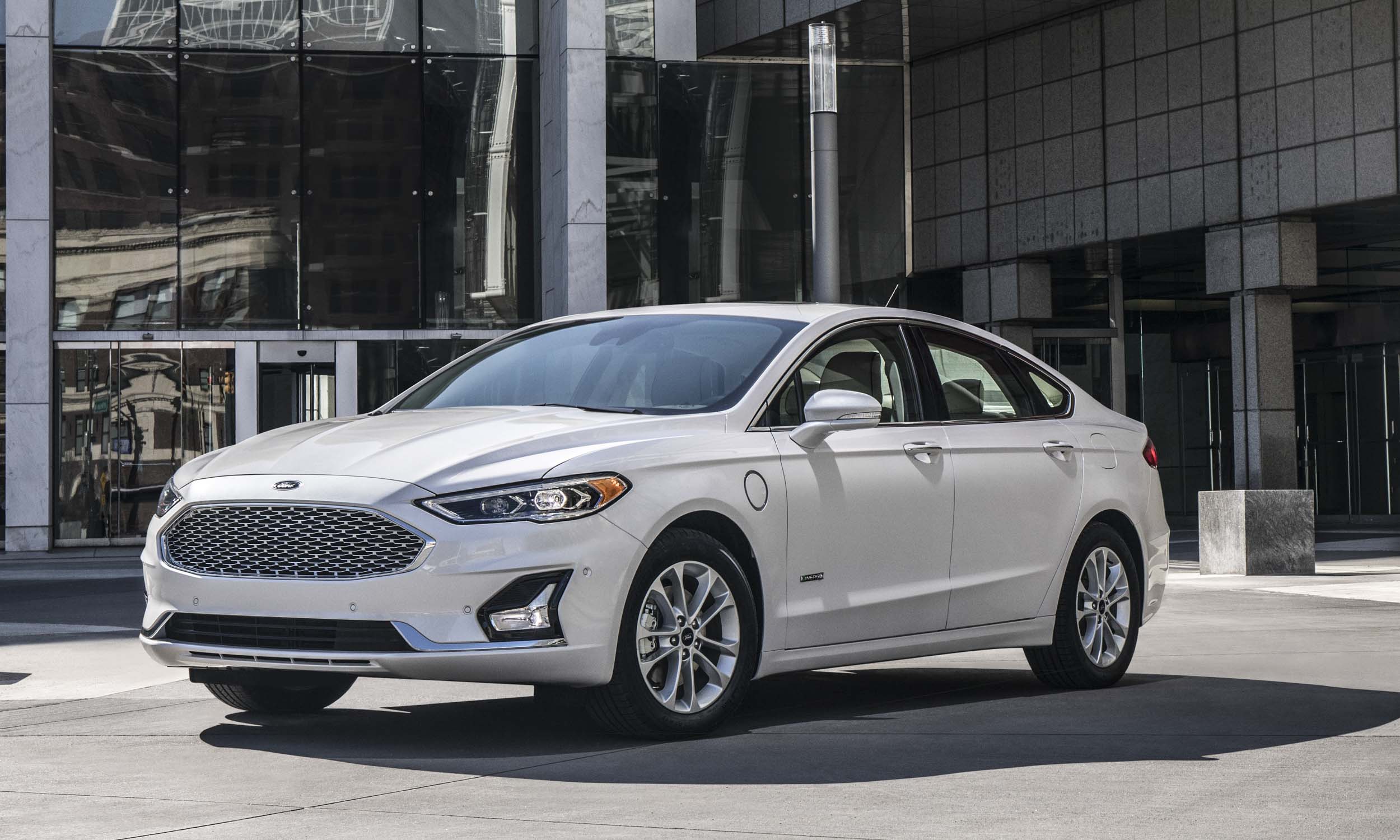 10. Ford Fusion
2020 Sales: 61,421
Starting MSRP: $23,170
Fusion is Ford’s midsize sedan that has been one of the best-selling American passenger cars for years, but sales continue to drop in 2020 as Ford shifts its focus from passenger cars to crossover models. Fusion was refreshed for the 2019 model year with subtle exterior design changes, interior improvements and standard Co-Pilot360, which includes automatic emergency braking, a blind-spot information system, lane-keeping assist and a rearview camera. Fusion is available with a variety of powertrains including hybrid and plug-in hybrid variants. 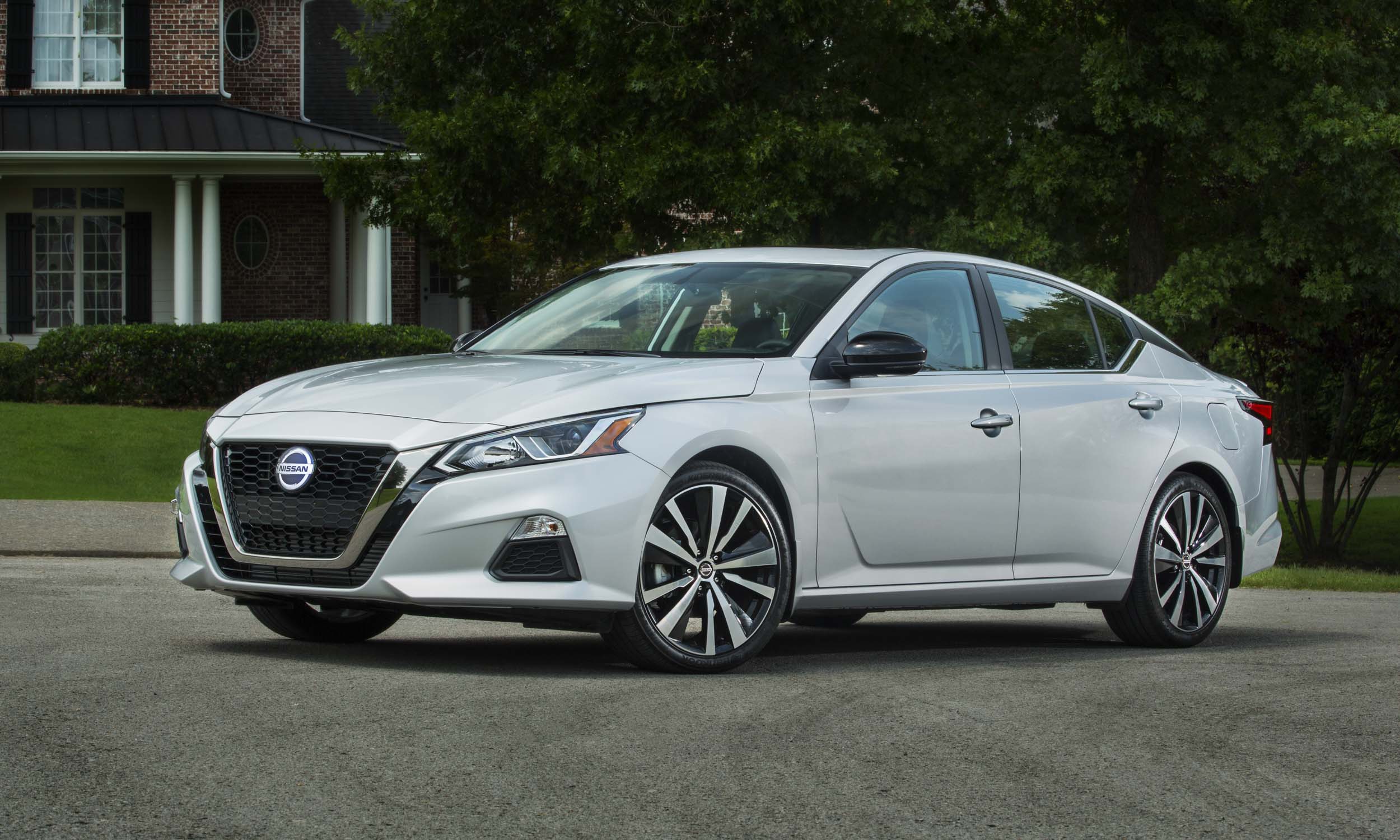 9. Nissan Altima
2020 Sales: 69,049
Starting MSRP: $24,200
Once Nissan’s best-selling car, Altima experienced a sales decline over the last few years, allowing the hot-selling Rogue crossover to claim its position as the top-selling Nissan model in America. The automaker seemed to be reversing that trend with an all-new Altima introduced for the 2019 model year, but the current situation brings sales down a bit for the first half of 2020. The new Altima features updated styling inside and out as well as a range of new features. Two powertrains are offered, including the first production engine that uses variable compression — a lower compression ratio provides more power, while a higher ratio gets better fuel economy. Nissan also offers the Altima with all-wheel drive for the first time. 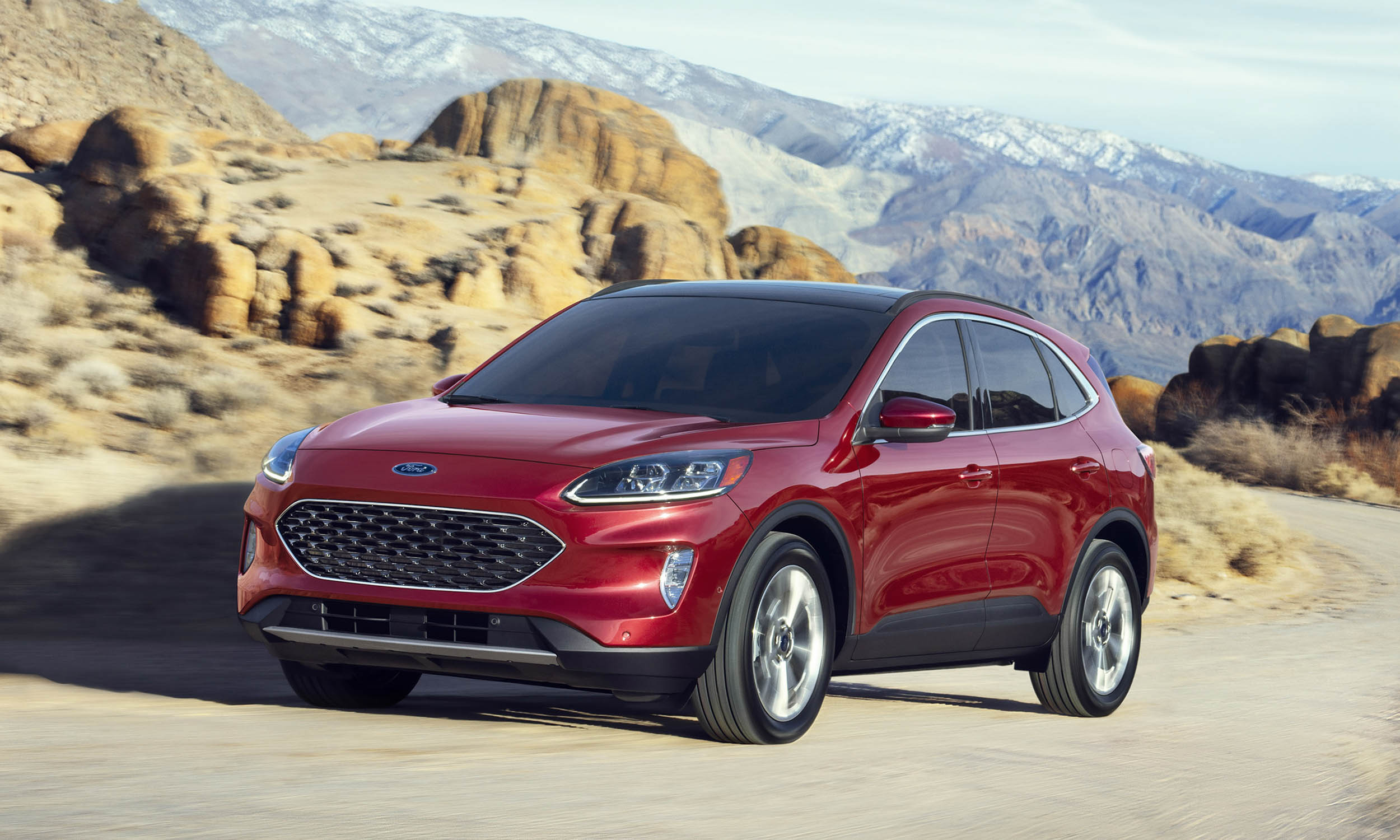 8. Ford Escape
2020 Sales: 84,797
Starting MSRP: $24,885
Ford’s compact crossover had been the best-selling American-brand SUV for many years, but a sales decline last year and a slow start for 2020 dropped Escape down the list. Once U.S. vehicle sales begin to recover, the Escape should experience a sales bump since it is all new for the 2020 model year. Lower, wider and longer than its predecessor, the new model has looks that are quite a departure from the previous generation. The front end features an all-new grille surprisingly similar to those on the Focus and Fusion passenger cars, rather than Ford SUVs. The 2020 Escape is available with a choice of four engines; the standard unit is a 3-cylinder 1.5-liter EcoBoost producing 180 horsepower. Ford also brings back the Escape Hybrid — the 2020 model is available as a standard hybrid as well as a plug-in version. 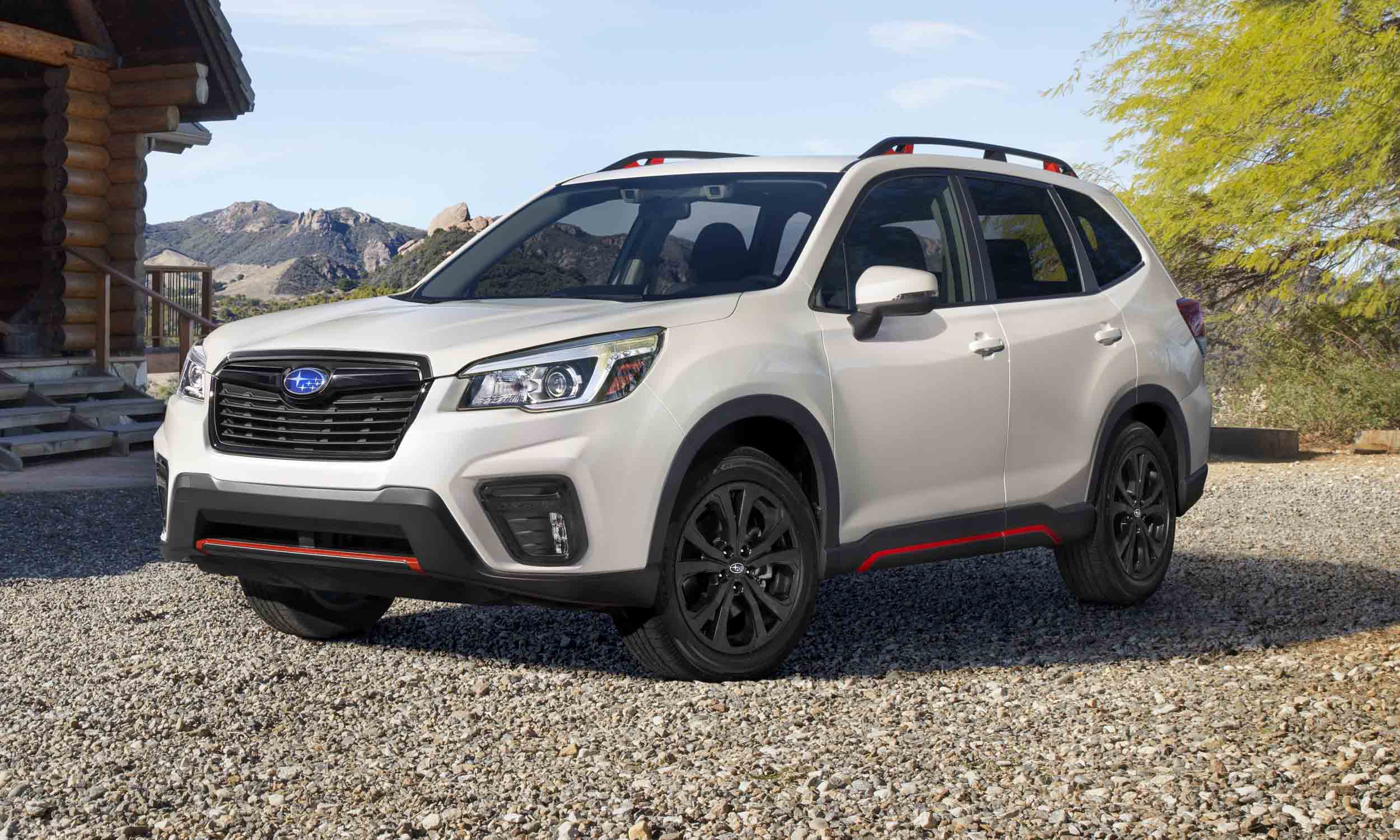 7. Subaru Forester
2020 Sales: 85,860
Starting MSRP: $24,79
Subaru introduced an all-new Forester last year, and it is one of the few models showing some sales success during this difficult year. Sales of the Forester were up almost 3 percent in Q2 versus a year earlier, with June numbers revealing an increase of 32 percent. The new fifth-generation Forester is the roomiest version ever offered with a 1.2-inch-longer wheelbase, more rear-seat legroom and rear cargo capacity. The Forester also offers improvements in crash protection, comfort, quietness and driving dynamics. Power comes from an updated direct-injection 2.5-liter Boxer engine that produces 182 horsepower and 176 lb-ft of torque. Subaru’s EyeSight driver-assist technology is now standard on the Forester, as is a new safety feature: Rear Seat Reminder. 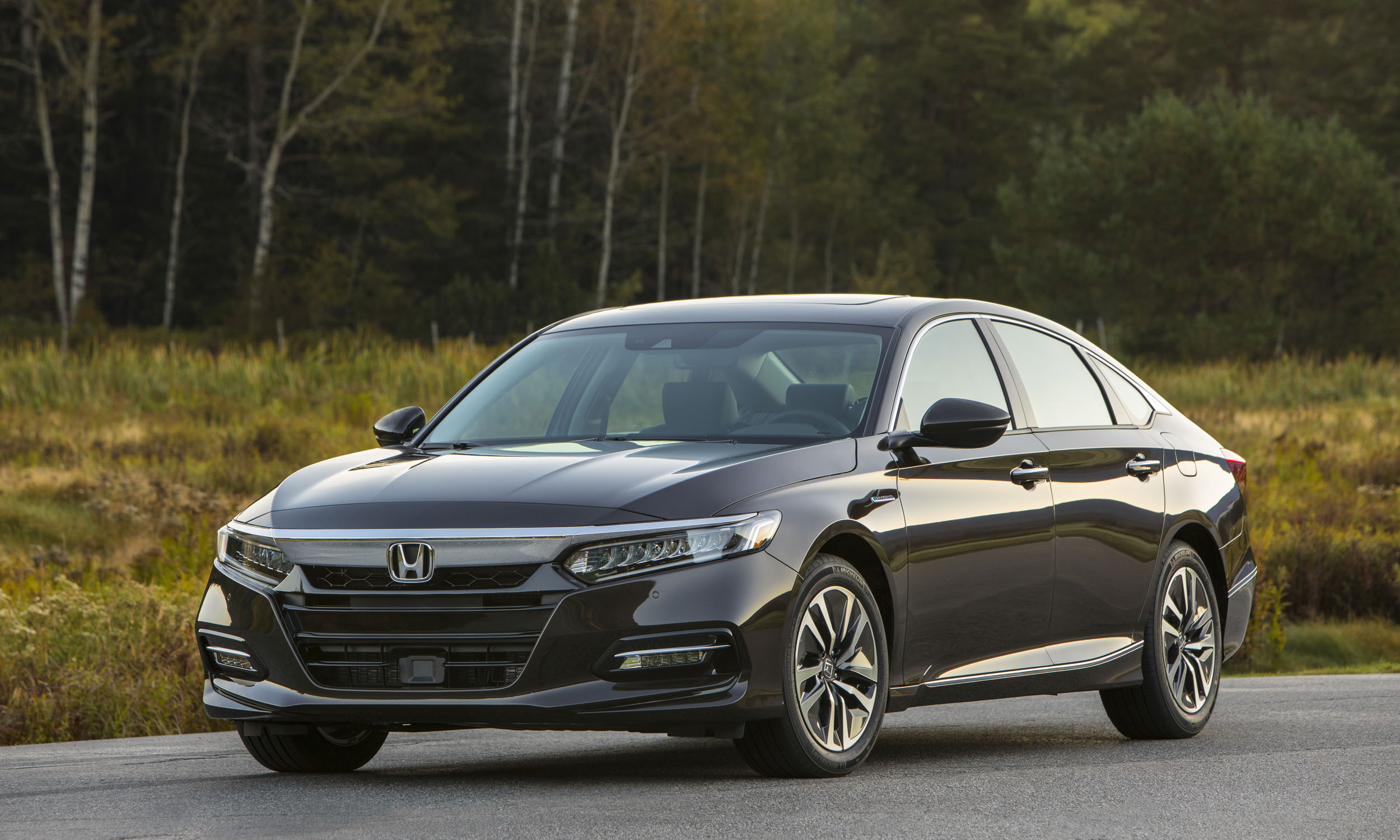 6. Honda Accord
2020 Sales: 88,754
Starting MSRP: $24,270
Although still one of the best-selling cars in America, the Honda Accord has not experienced great sales success since its redesign for the 2018 model year. Sales of this long-lived sedan were down almost 15 percent by the end of February 2020 compared to a year earlier, and the current state of the world has also impacted sales. Available in a range of trim levels, Accord is one of the last midsize sedans on the market to offer a manual gearbox. Two turbocharged engines are available that feature great performance and fuel economy. For 2020 the company made the Honda Sensing suite of safety features standard on all Accord variants. 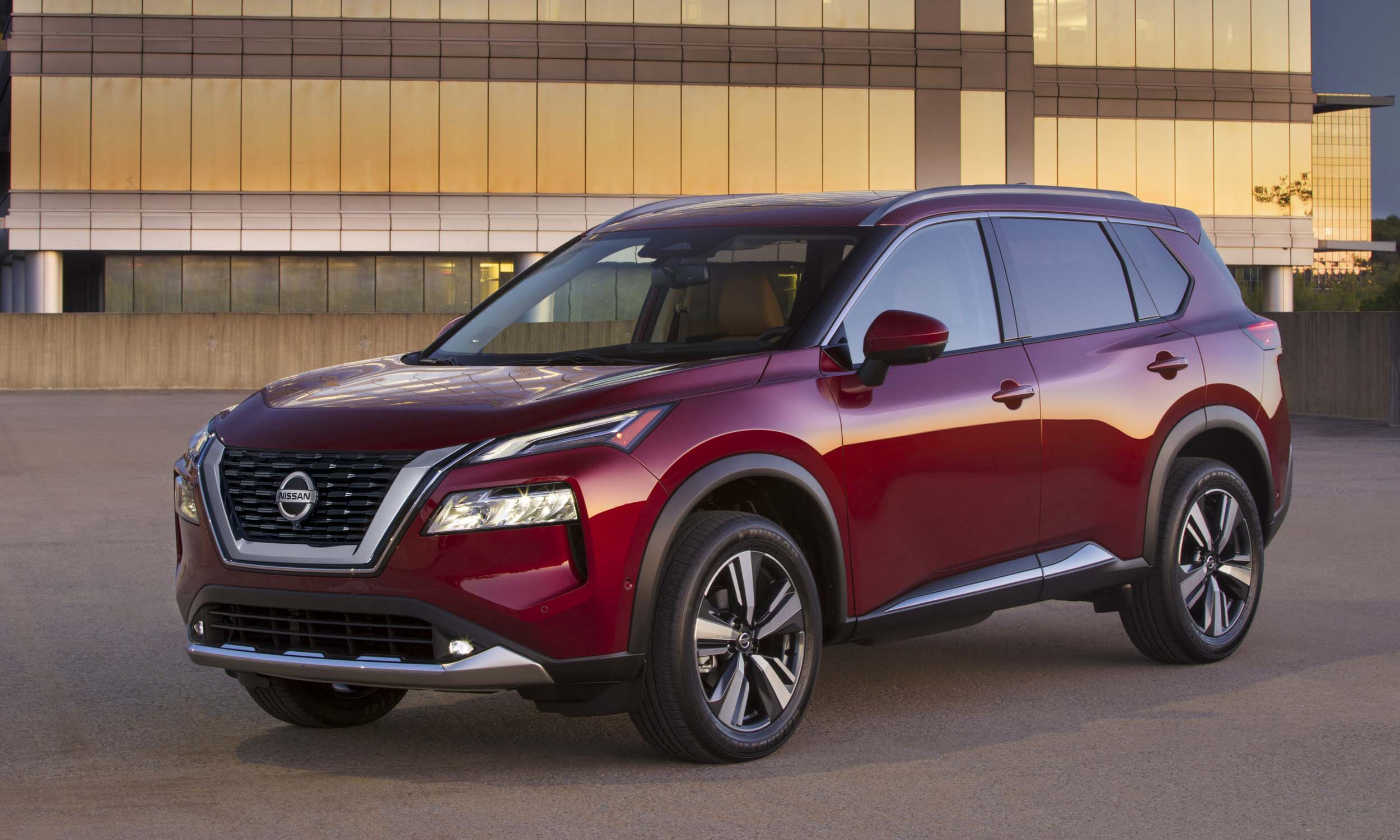 5. Nissan Rogue
2020 Sales: 106,965
Starting MSRP: $23,430
Nissan Rogue remains the best-selling model in the Nissan lineup, despite a 15 percent drop in sales for 2019 that has been further impacted by the COVID-19 pandemic with sales down nearly 30 percent for the first half of 2020. Rogue features a 170-horsepower 2.5-liter 4-cylinder engine with an advanced Xtronic transmission with Eco mode, boasting a U.S. EPA fuel-economy rating as high as 33 mpg. Rogue is available in three trim levels, and also comes as a smaller model called Rogue Sport that starts at $23,430. All Rogues are now available with ProPILOT Assist — Nissan’s first step toward building autonomous vehicles — as well as Nissan Safety Shield 360. An all-new Rogue should begin rolling into showrooms soon for autumn 2020. 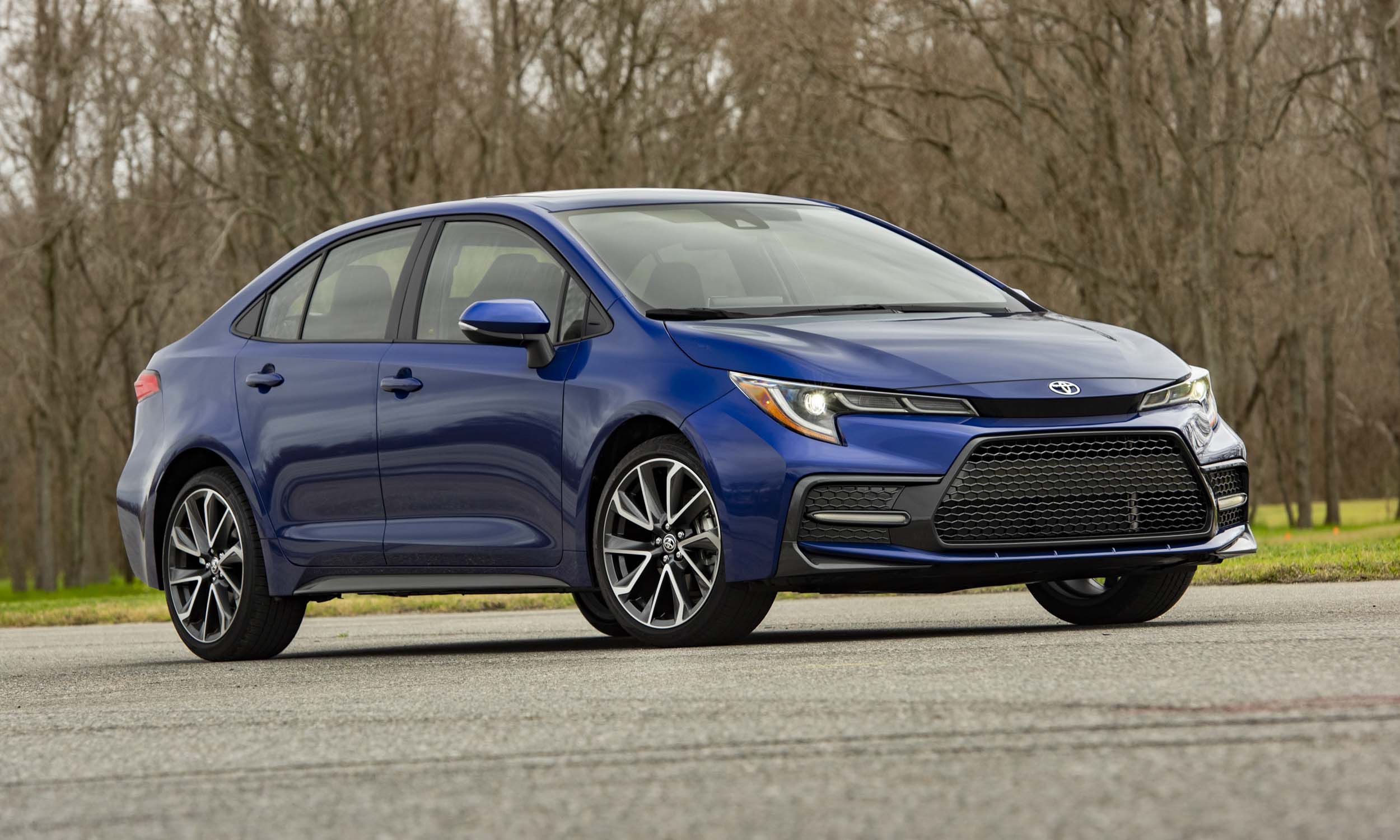 4. Toyota Corolla
2020 Sales: 109,601
Starting MSRP: $19,825
Corolla is one of Toyota’s best-selling models, and more than 1 million have been built in the automaker’s Mississippi assembly plant. Toyota introduced an all-new Corolla for the 2020 model year and for the first time a Corolla Hybrid is offered as well. The new Corolla features updated styling with a wider stance as well as signature LED headlights and a range of new features. Three powertrains are available, including a very efficient hybrid system that has a U.S. EPA rating of more than 50 mpg. Toyota equips all levels of the new Corolla with Toyota Safety Sense 2.0. This suite of advanced safety features includes automatic emergency braking, lane departure alert with steering assist, automatic high-beam headlights and road sign recognition. 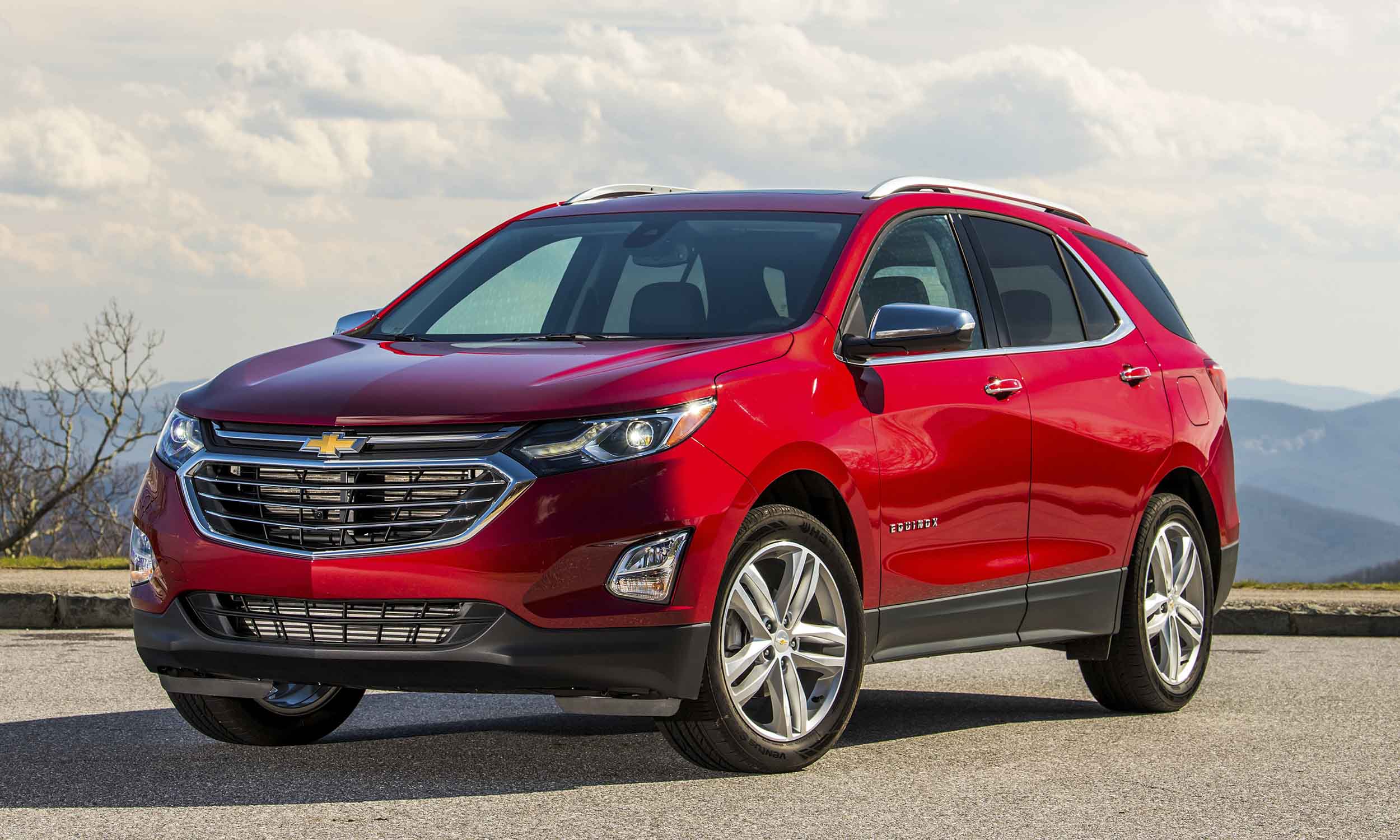 3. Chevrolet Equinox
2020 Sales: 124,251
Starting MSRP: $23,800
Chevrolet’s second-best-selling vehicle after the full-size Silverado pickup, the Equinox had record sales in 2019, although first half 2020 sales are down 28 percent. Equinox stands out in the crowded crossover market with projector-beam headlights, LED running lights, wider horizontal taillights and LED taillights for upper trim levels. Inside, the Equinox features a down-and-away instrument panel with a low windshield base for improved outward visibility. Two engine choices for Equinox are a 170-horsepower 1.5-liter turbo or a 252-horse 2.0-liter turbo teamed with a 9-speed automatic transmission. For 2020 Chevrolet adds a Midnight Edition Equinox to the lineup. 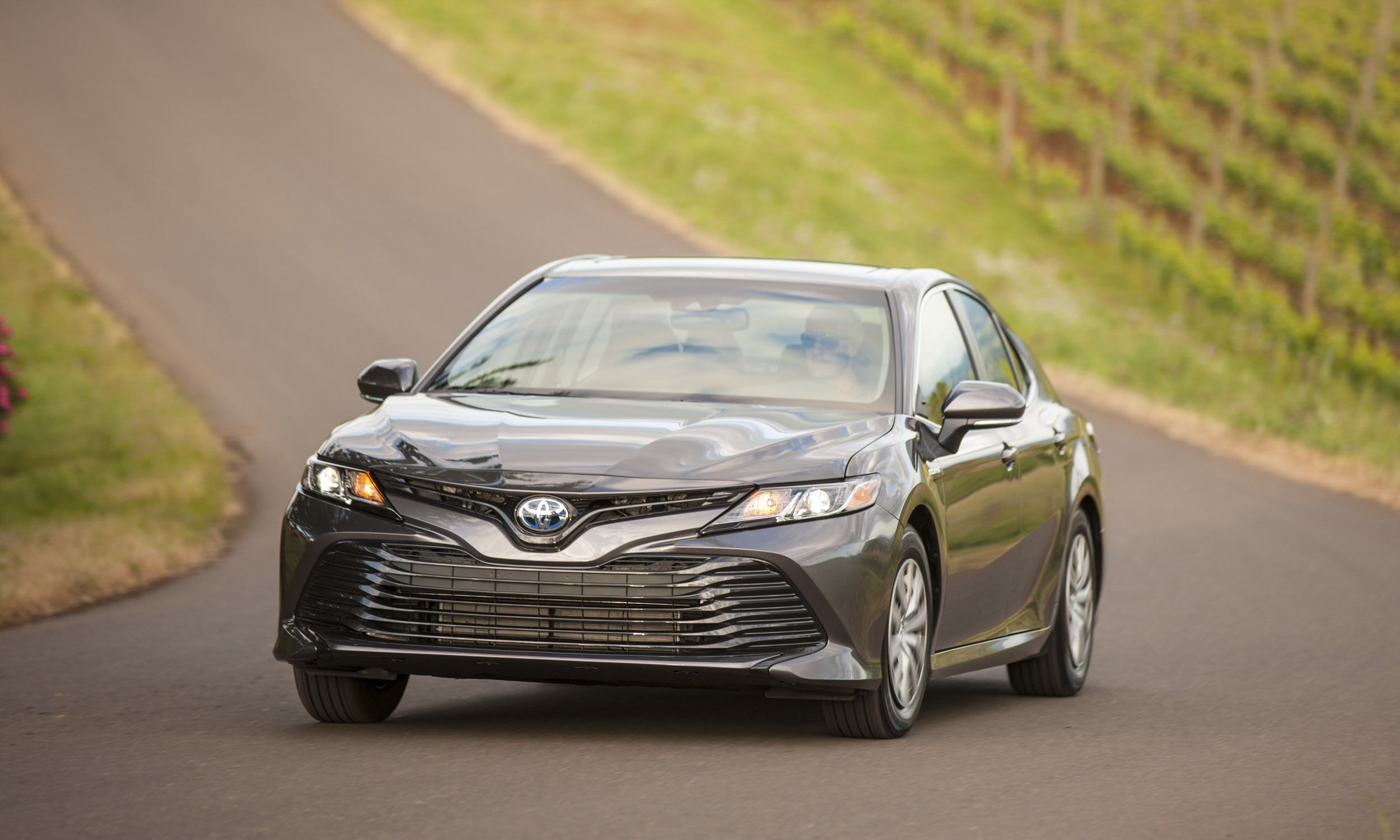 2. Toyota Camry
2020 Sales: 125,899
Starting MSRP: $24,425
Even though sales of the Camry were down slightly last year, the popular sedan continued its reign as best-selling car in America, with 2019 marking the 17th year in that top position. As with most vehicles on this list, the Camry had a steep decline in sales for Q2 2020 versus a year earlier. Toyota introduced the eighth-generation Camry a few years ago, giving the popular sedan a more engaging appearance with a more comfortable interior and a range of fuel-efficient and powerful engines. For those seeking even more performance, Toyota adds the Camry TRD to the lineup with performance suspension and brakes, more aggressive styling and a cat-back exhaust system. 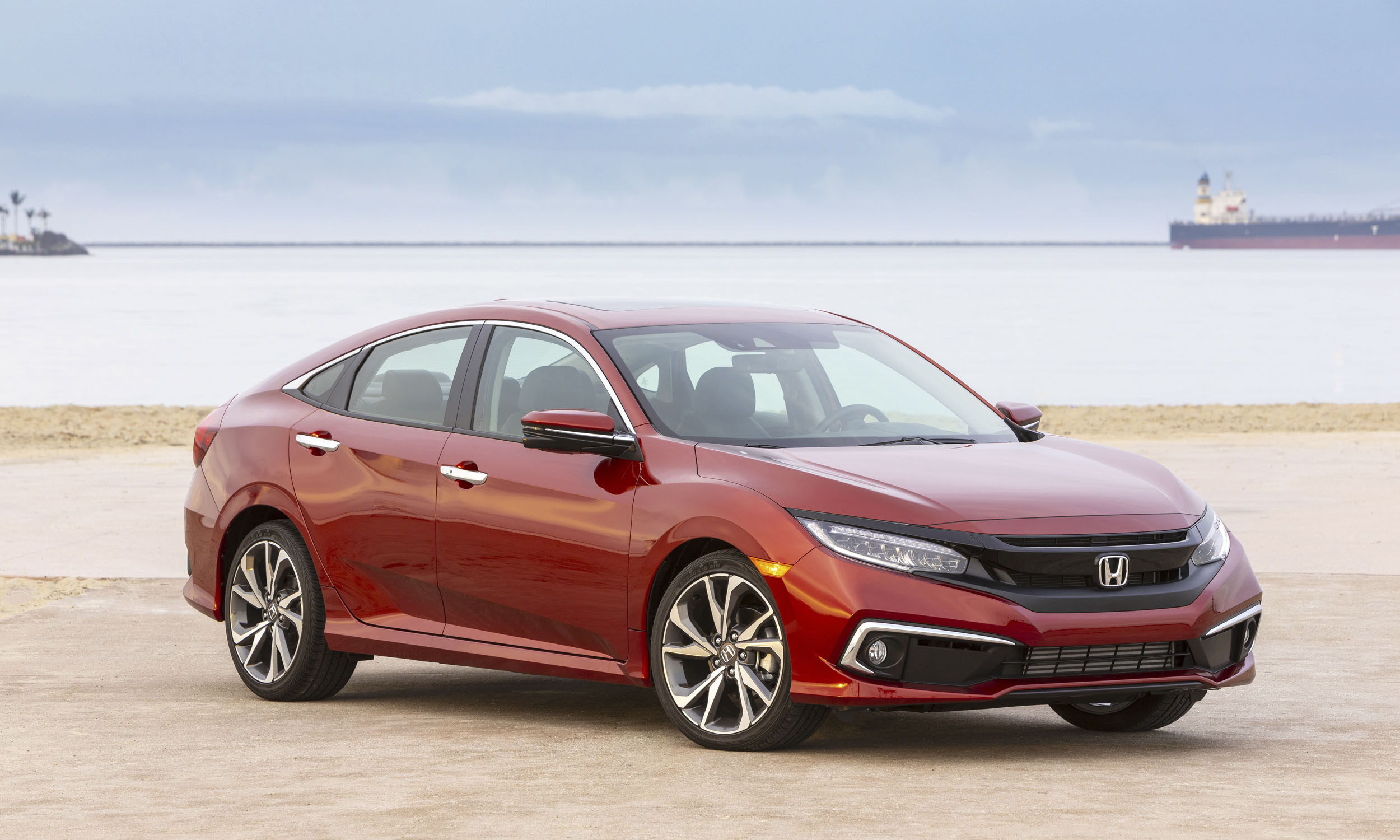 1. Honda Civic
2020 Sales: 127,858
Starting MSRP: $20,800
Although sales are down almost 30 percent in Q2 2020 versus the previous year, the Civic remains the best-selling passenger car in the Honda lineup and — for the moment — it is the best-selling passenger car in America. The tenth generation Civic debuted early in 2017, built on a new vehicle architecture with improved driving dynamics and a more spacious interior. Last year Civic received a light refresh and a range of new features, as well as the new Civic Sport trim. Honda has made Honda Sensing standard on all trims, which includes automatic emergency braking, adaptive cruise control and lane-keeping assist.