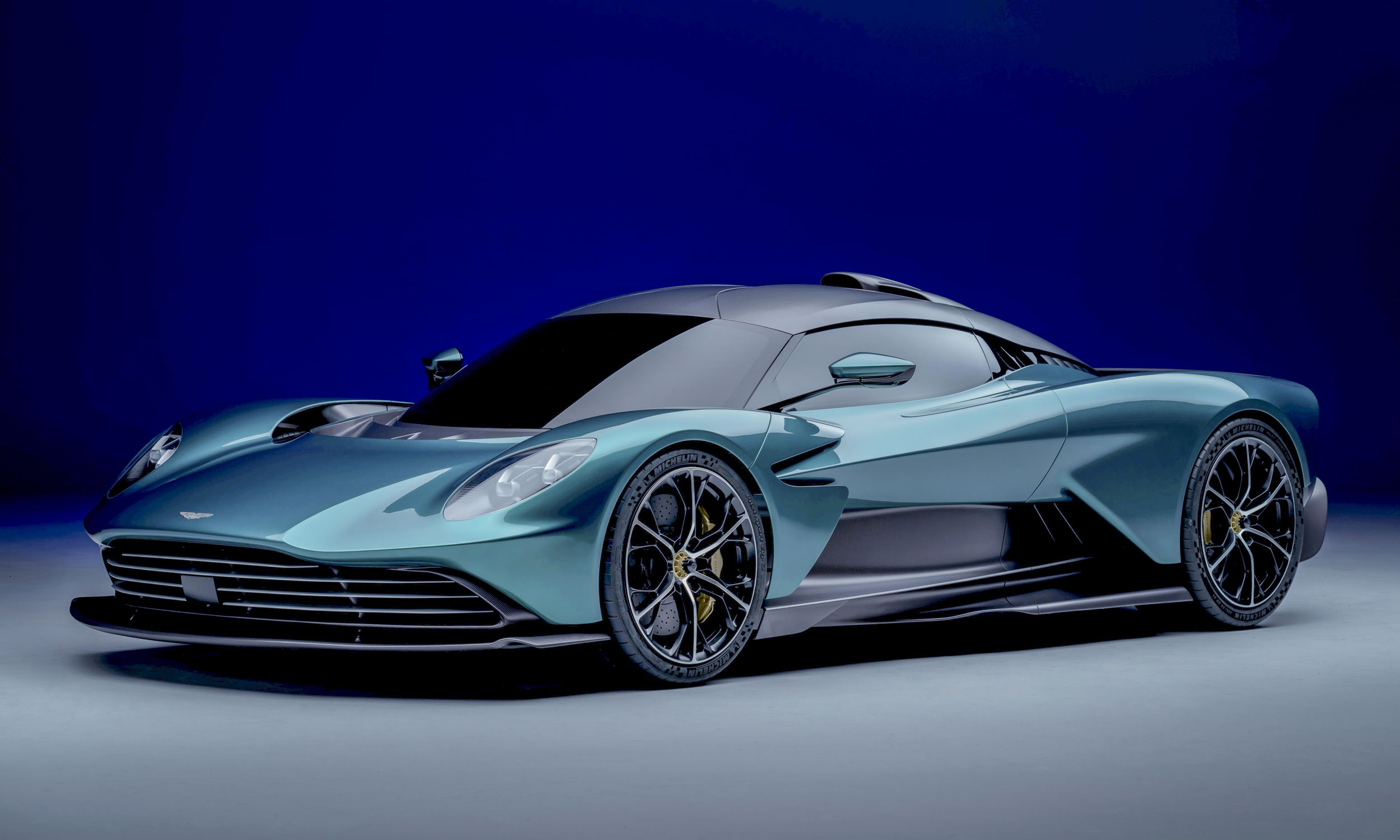 © Aston Martin
Concept to Production
Well known for producing some of the most beautiful high-performance sports cars on the planet, Aston Martin typically builds cars in the classic front-engine / rear-wheel-drive configuration. However, a few years ago at the Geneva Motor Show the famed British marque introduced a concept supercar called the AM-RB 003 that represents a major departure in both styling and configuration thanks to its mid-engine hybrid powertrain. Now that concept moves to production as the Aston Martin Valhalla. 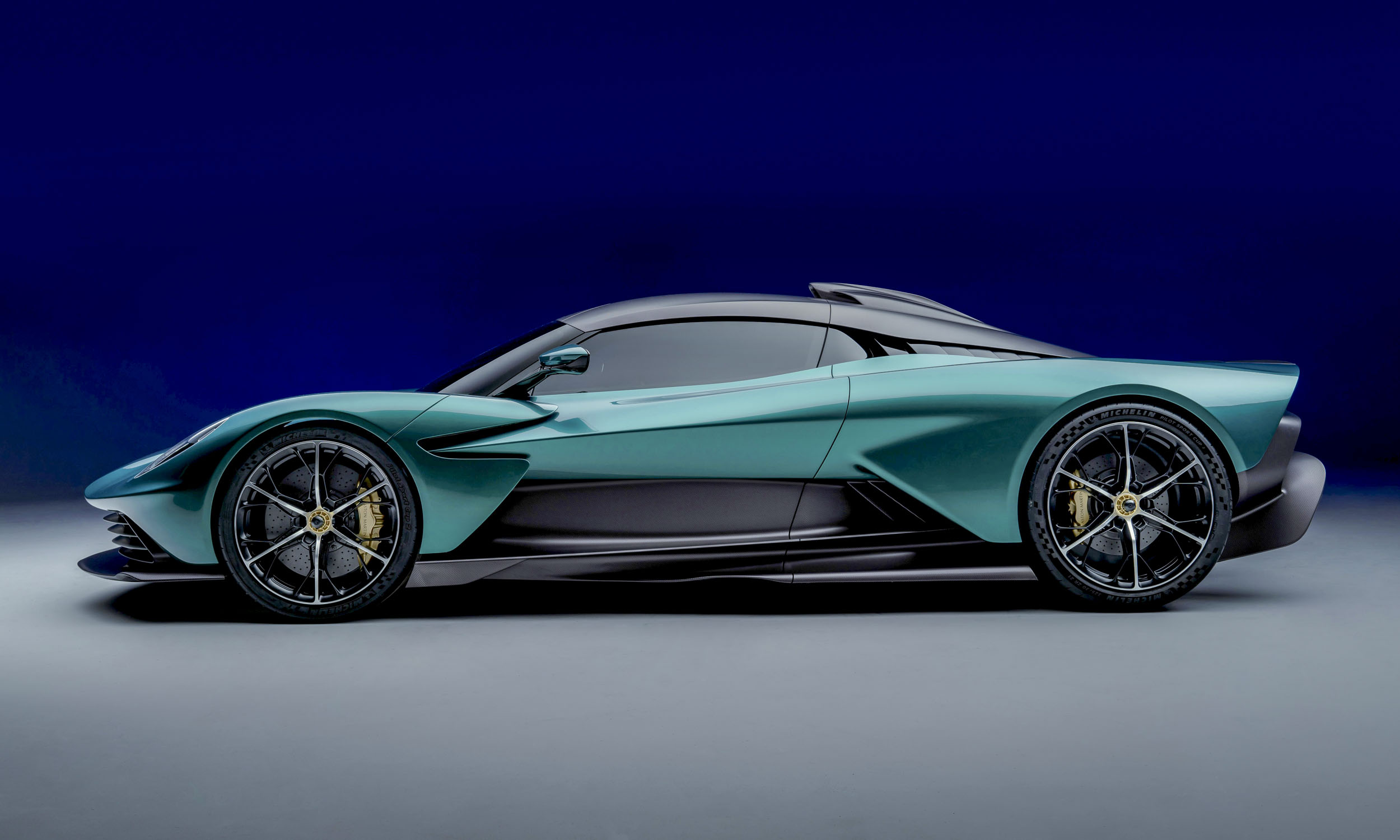 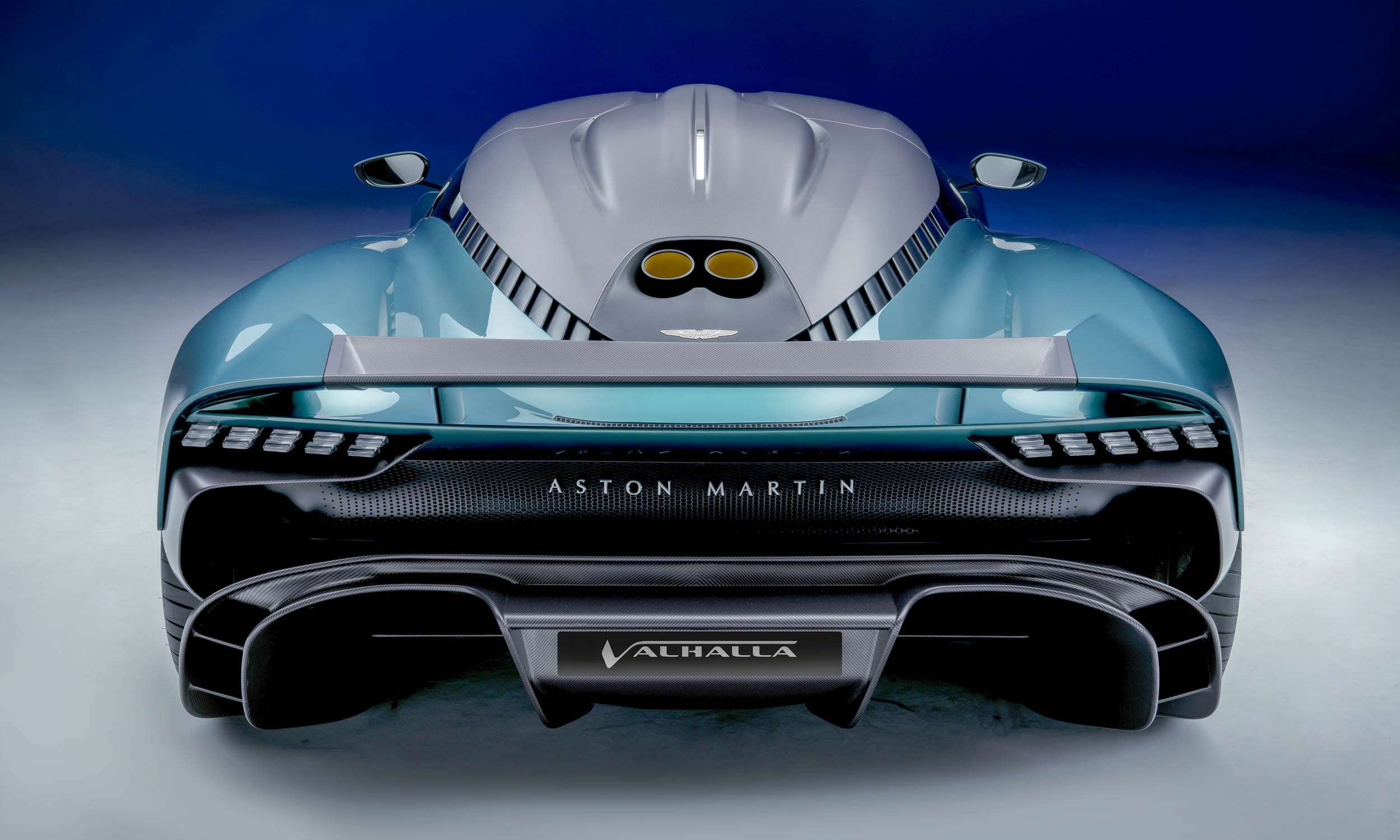 © Aston Martin
Hybrid Powertrain
At the heart of Valhalla’s plug-in hybrid powertrain beats a rear-mid-mounted 4.0-liter twin-turbo V8 engine producing 740 horsepower at the rear wheels. The potent V8 is enhanced by two electric motors — one on each axle — that contribute an additional 201 horsepower for a total combined output of 937 horses and 738 lb-ft of torque. All that energy gets directed to the road via an all-new 8-speed dual-clutch gearbox without a reverse gear. Valhalla employs an e-reverse system utilizing one of the electric motors for backup duty, eliminating the need for a conventional reverse gear. 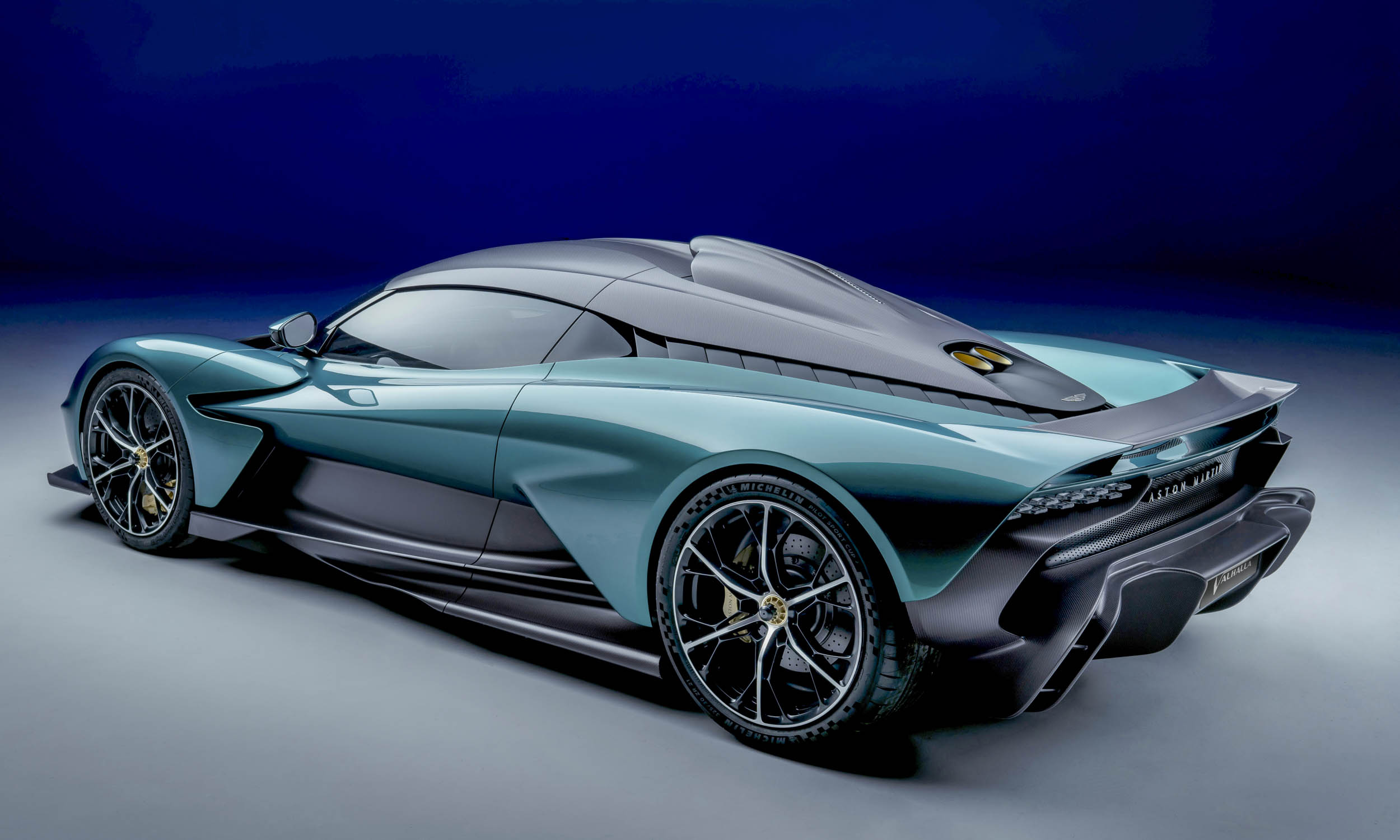 © Aston Martin
Proper Showcase
“Valhalla is our first opportunity to really show what we are capable of in a true production sense,” said Aston Martin Head of Powertrain Engineering Ralph Illenberger. “We have created our own bespoke air to air charge cooled flat plane crank V8 engine and have combined it with a powerful hybrid system. And, of course, we also have our own bespoke Dual Clutch Transmission [—] a first for Aston Martin and an essential component both for Valhalla and future Aston Martin models. The result is a truly world class powertrain for an efficient, ultra performing supercar,” enthused Illenberger. 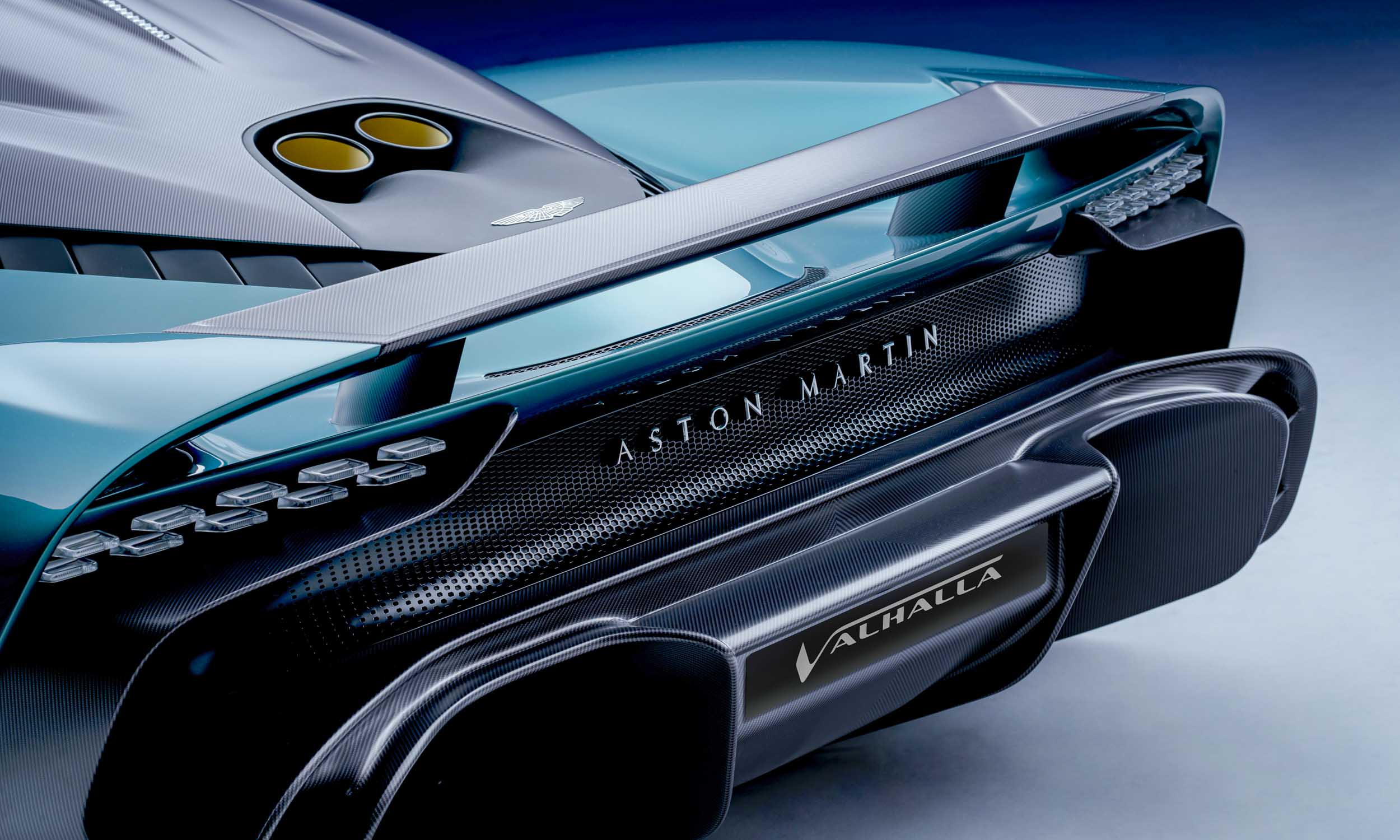 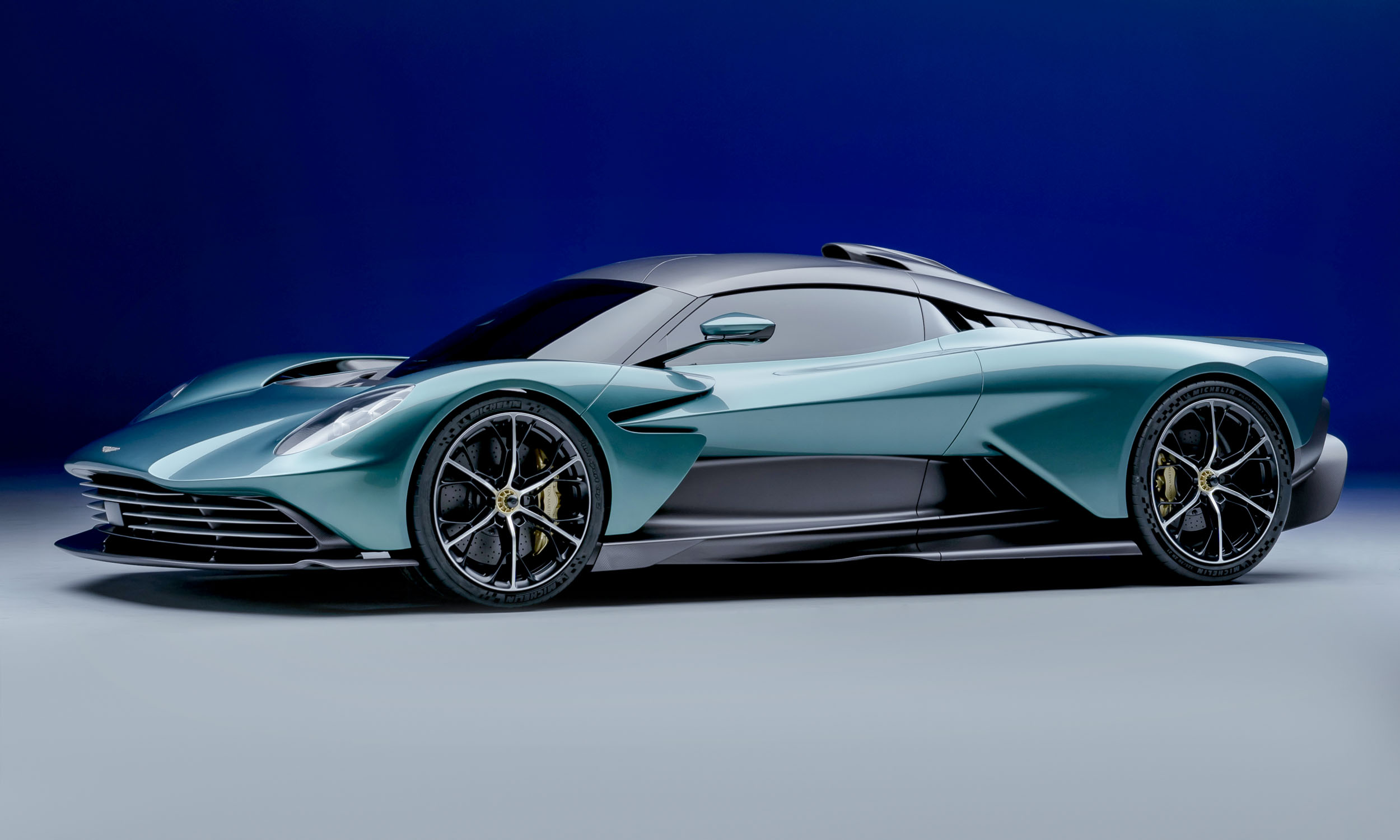 © Aston Martin
Optimized for Performance
As the centerpiece of Valhalla’s structure, a carbon fiber tub provides maximum stiffness while lessening weight to optimize handling and performance. A Formula One-style pushrod front suspension with inboard mounted springs and dampers reduces unsprung mass. This combined with rear-end multi-link suspension and Multimatic variable spring rates means the ride can be adjusted for maximum performance on road and track. 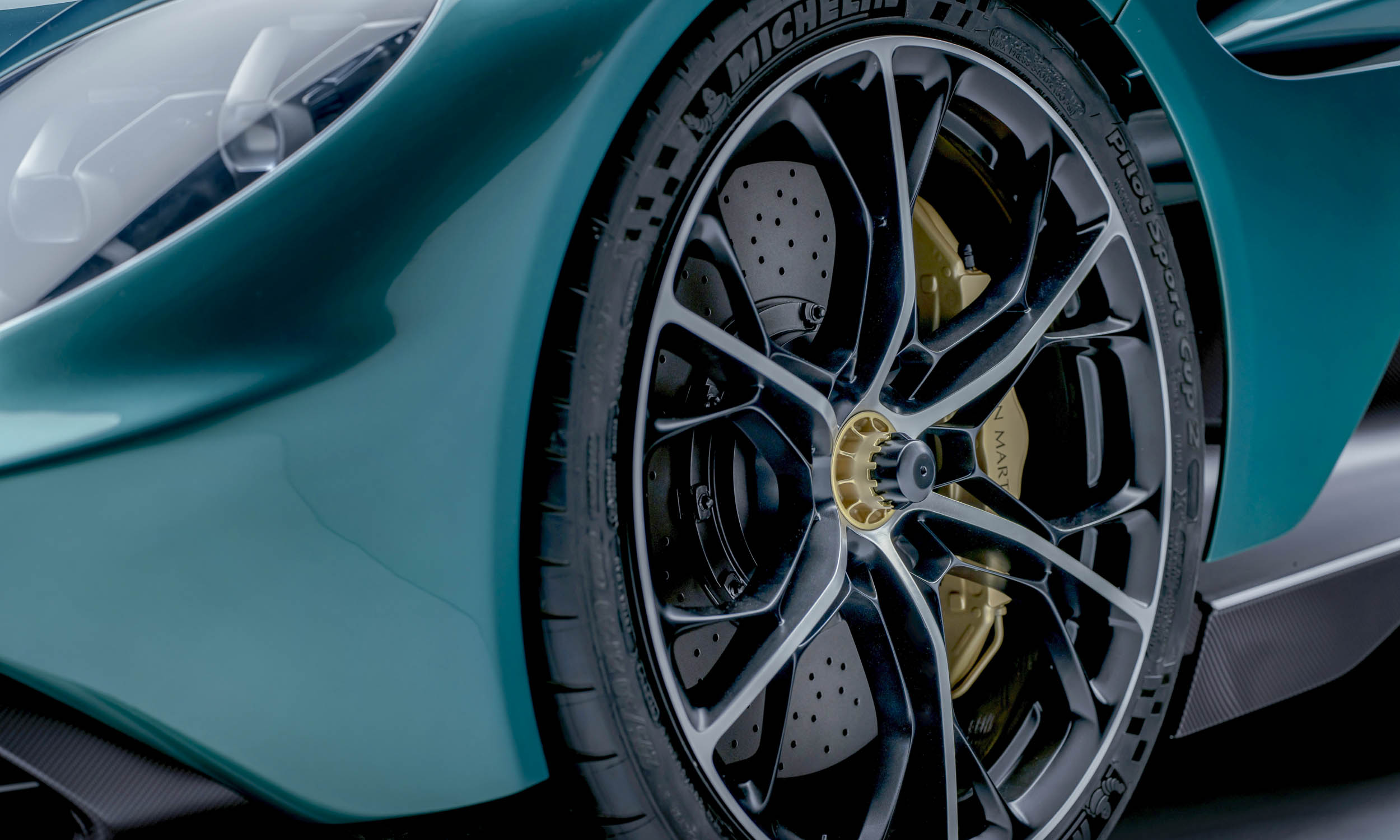 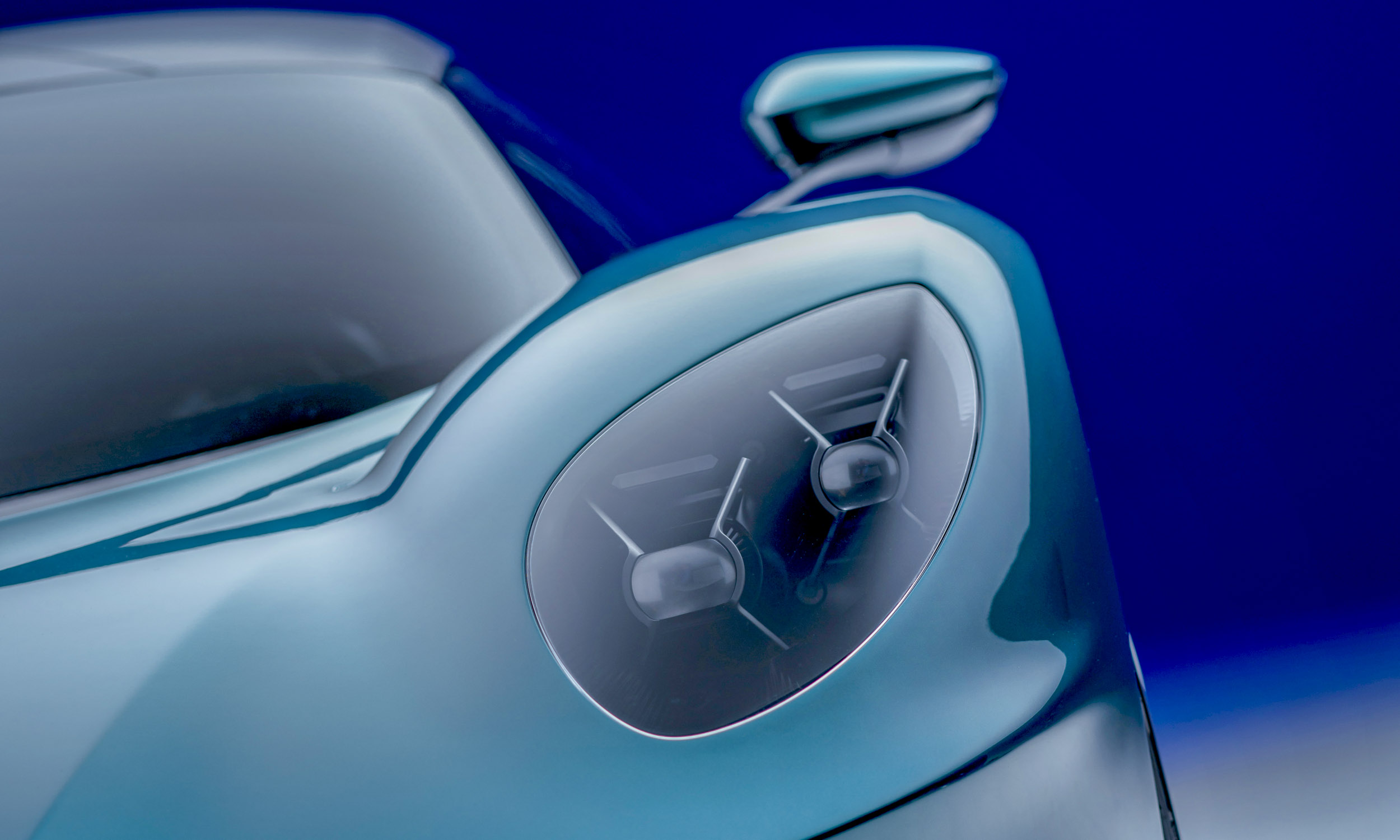 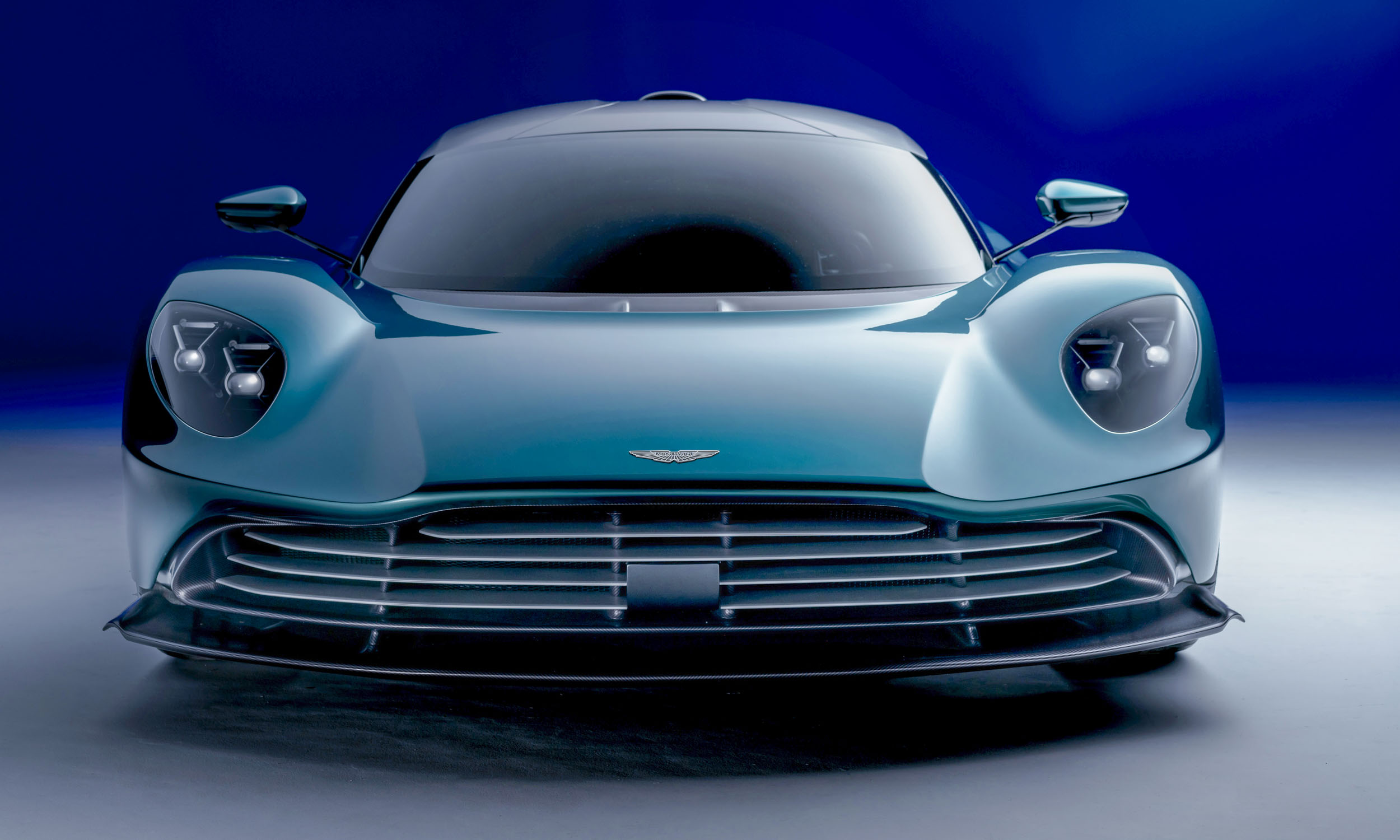 © Aston Martin
Active Aerodynamics
Much of the Valhalla’s design and engineering are a direct result of development around Aston’s latest hypercar, the Valkyrie. This includes front surfaces and a rear wing that adjusts to generate as much as 1,322 pounds of downforce at 150 mph for impressive stability and cornering. The entire carbon fiber body is designed to optimize airflow, including a roof scoop that feeds air directly into the V8 engine intakes. 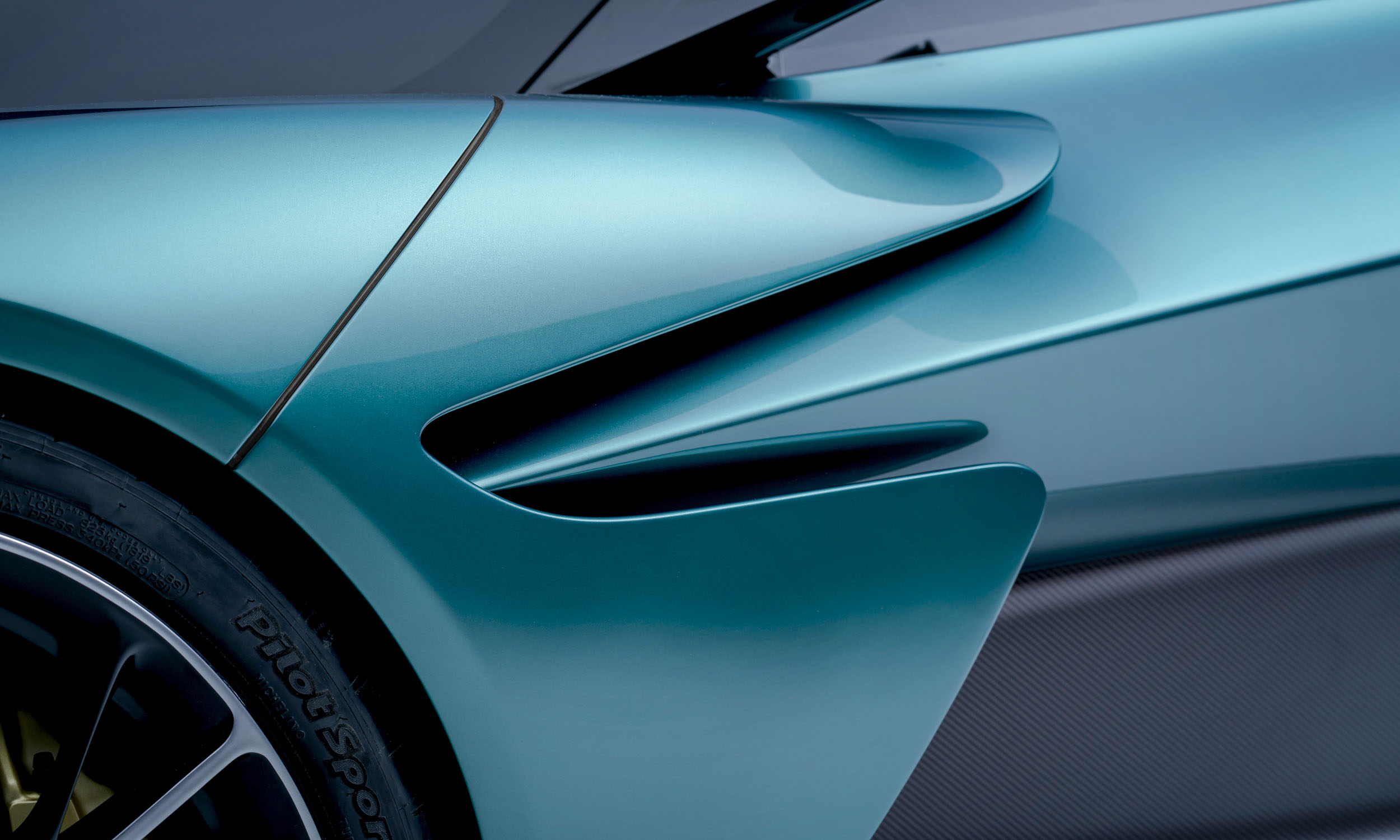 © Aston Martin
EV Mode
The Valhalla may be an extreme sports car, but it can be operated calmly if so desired. In EV mode this Aston uses its front electric motor to travel up to 80 mph in complete silence; the car has a range of about nine miles on electric power. 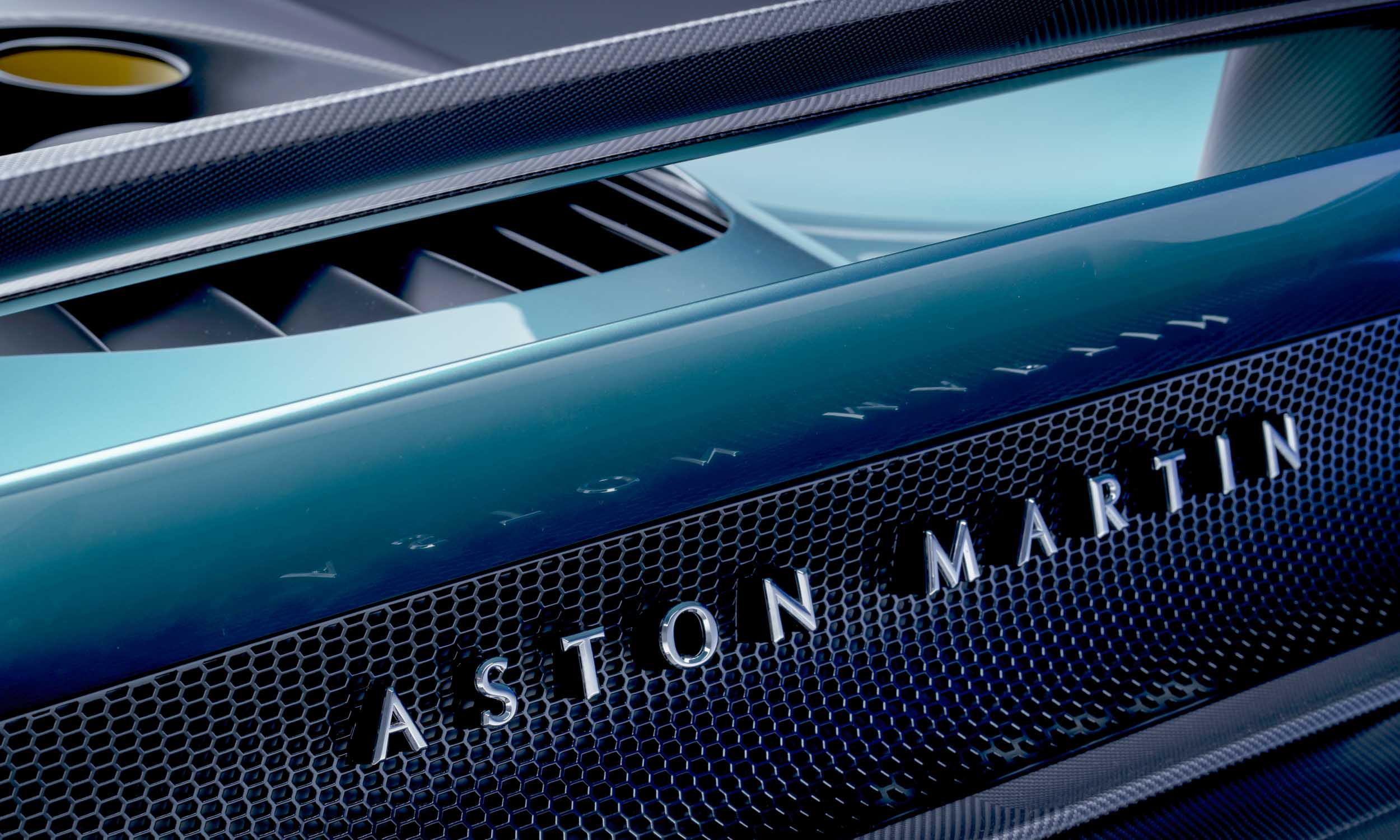 © Perry Stern, Automotive Content Experience
Extreme Performance
Granted, the electric motors of the Valhalla do add a certain level of efficiency, but when needed they combine with the powerful V8 resulting in some extreme performance stats. The sprint to 60 mph takes 2.5 seconds, and with enough road the Valhalla will reach 217 mph. Although Valhalla hasn’t had the opportunity to circumnavigate the famous Nurburgring Nordschleife racing circuit in Germany, engineers anticipate the supercar will achieve a time of approximately 6 minutes 30 seconds — which would be quite impressive. 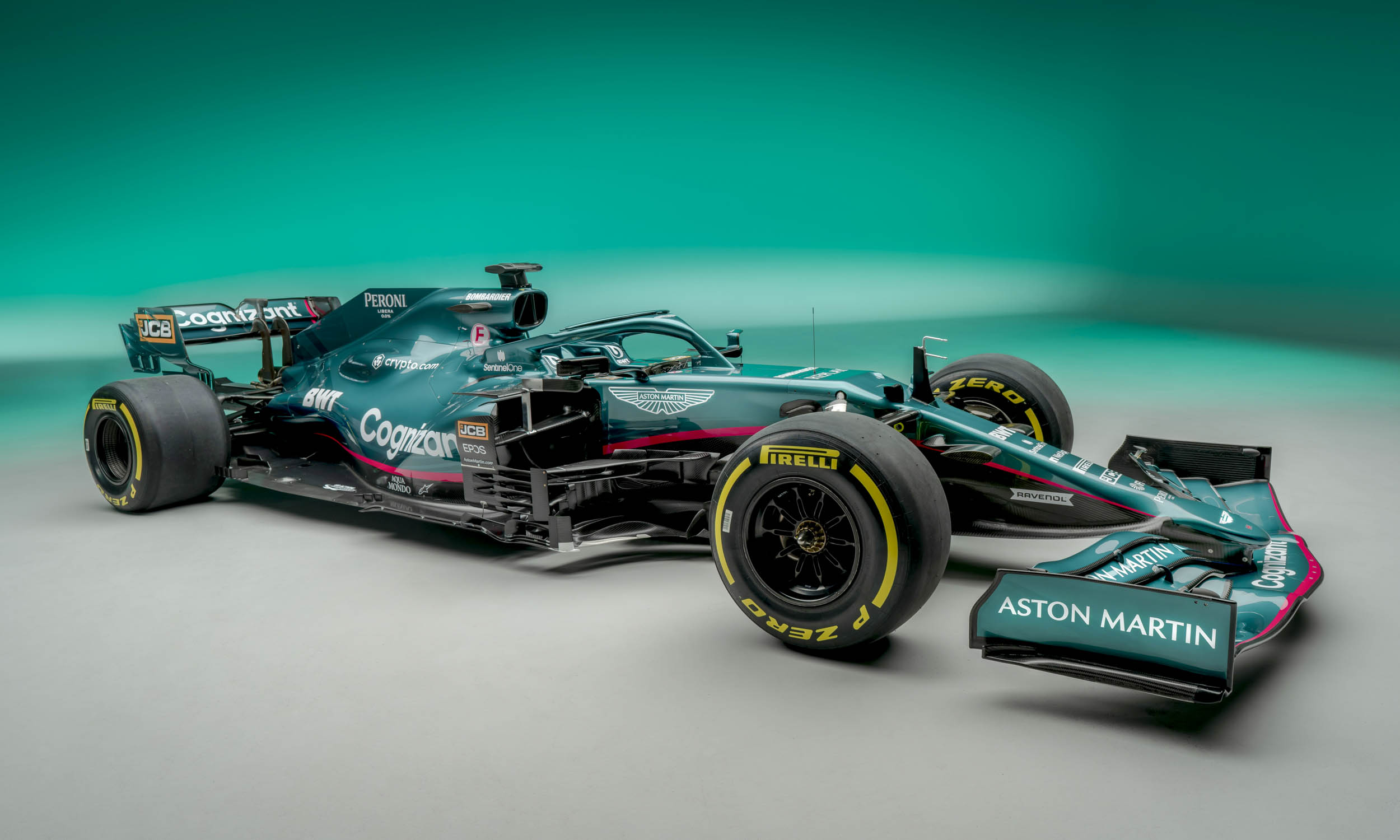 © Aston Martin
Formula One Expertise
Not only have engineers enhanced Valhalla development with chassis, aerodynamics and electronics expertise derived from the company’s history in Formula One racing, Aston Martin is also taking full advantage of the combined brain trust of F1 team drivers Sebastian Vettel, Lance Stroll and Nico Hulkenberg. The results should make Valhalla a proper driver’s car, bringing racing excitement and engagement to a street-legal supercar.

© Aston Martin
True to Concept
“Preserving the essence of an exceptional concept car is vital when meeting the challenge of bringing it into production,” said Aston Martin CEO Tobias Moers. “With Valhalla not only have we stayed true to our commitment to build a world beating supercar, but we have exceeded our original aims. The result is a pure driving machine . . . at the cutting edge of performance and technology yet allows the driver to feel the emotion and thrill of complete connection and control,” Moers noted. 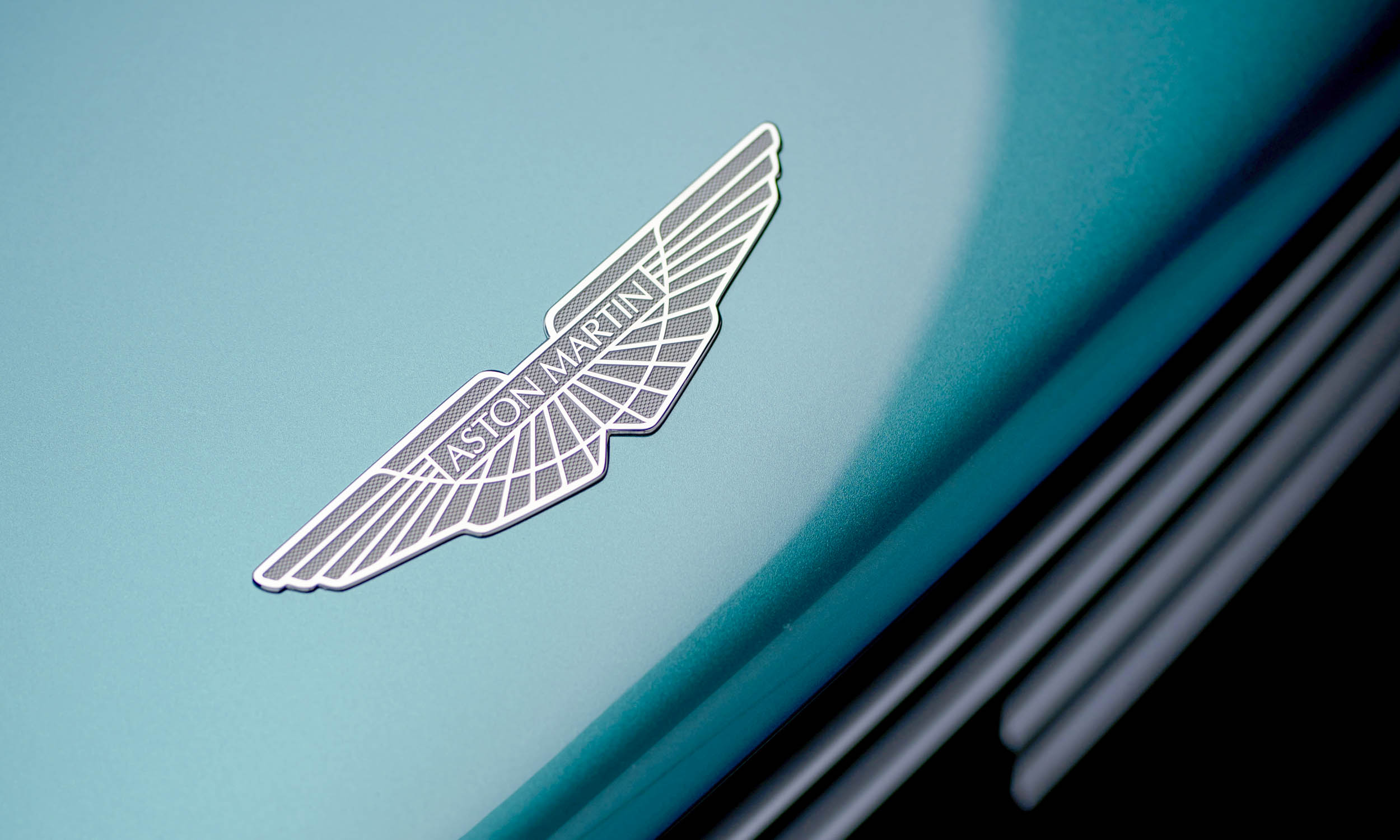 © Aston Martin
Arriving in 2023
Aston Martin expects Valhalla deliveries to begin in 2023 and while cost has not been announced, we expect the new Valhalla’s starting price will be less than US$1 million.