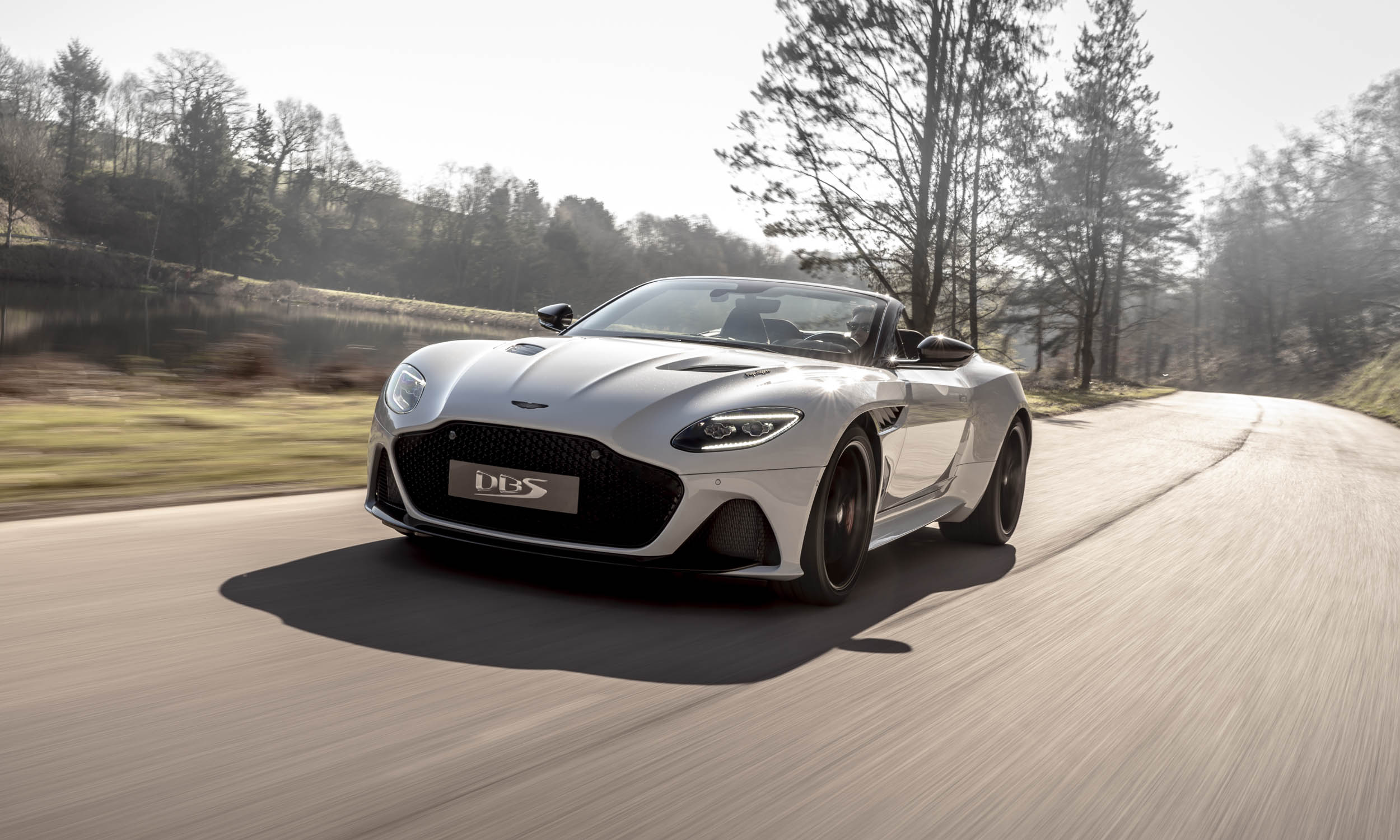 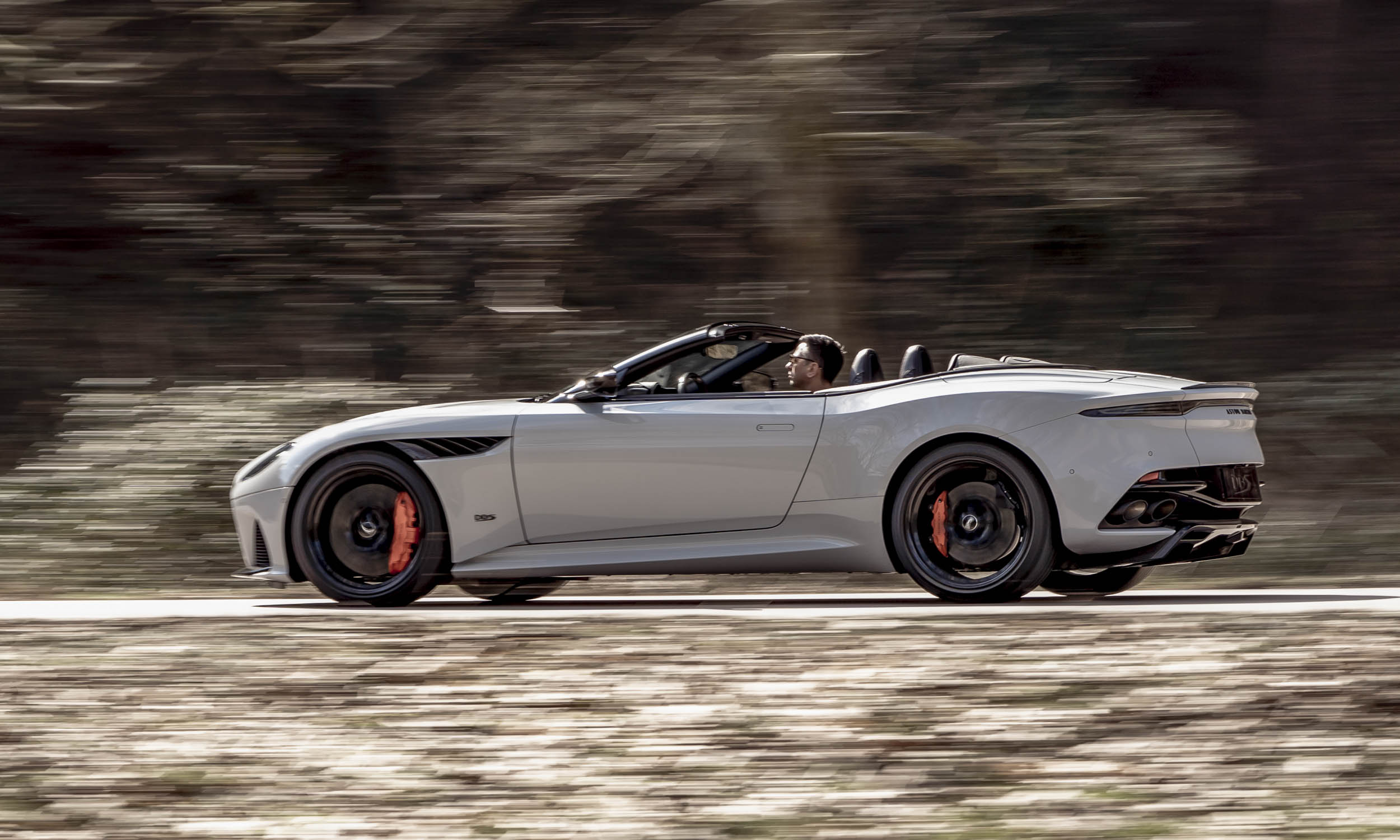 Sensory Overload
“DBS Superleggera produces a spectacular and relentless level of performance and so for the Volante, we focused on bringing that extra level of sensory overload that only an open-top Super GT can deliver inside the cabin,” said Aston Martin Executive Vice President & Chief Creative Officer Marek Reichman. “With the unique dynamics, beautiful yet brutish design and the unmistakable harmonics of Aston Martin’s 5.2-litre V12 engine, we believe we have delivered a unique and unforgettable driving experience that is synonymous with the traditions of the Volante name,” noted Reichman. 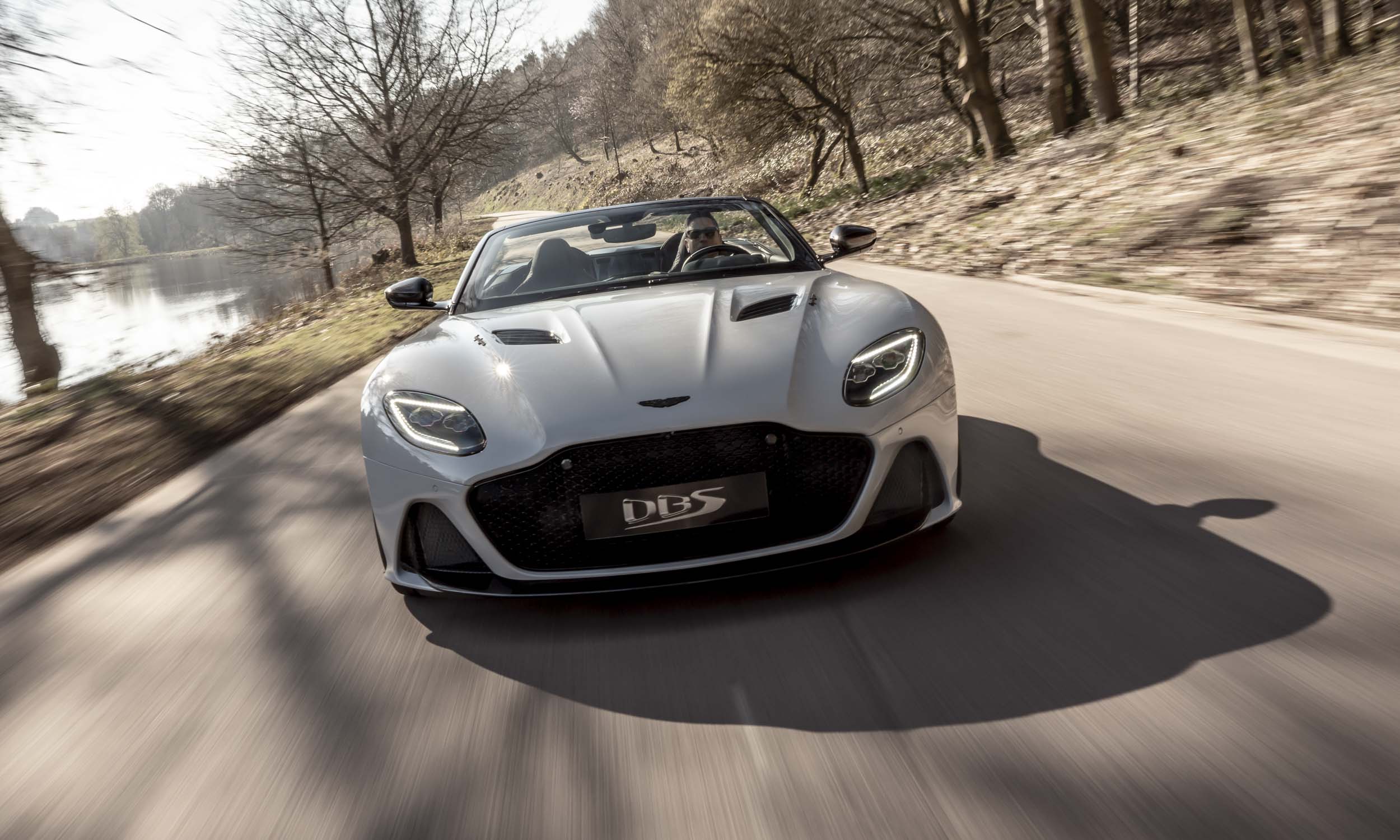 Massive Power
Aston Martin’s 5.2-liter twin-turbo V12 engine stokes the Superleggera Volante, producing a stunning 715 horsepower and 663 lb-ft of torque. All that raw energy gets sent to a new rear-mounted ZF 8-speed automatic transmission via a carbon-fiber driveshaft. The resultant performance specs are particularly impressive: a sprint to 62 mph takes 3.6 seconds, and in 6.7 seconds the DBS Superleggera has already reached 100 mph. With enough road (or track), this open-top rocket will eclipse 210 mph. 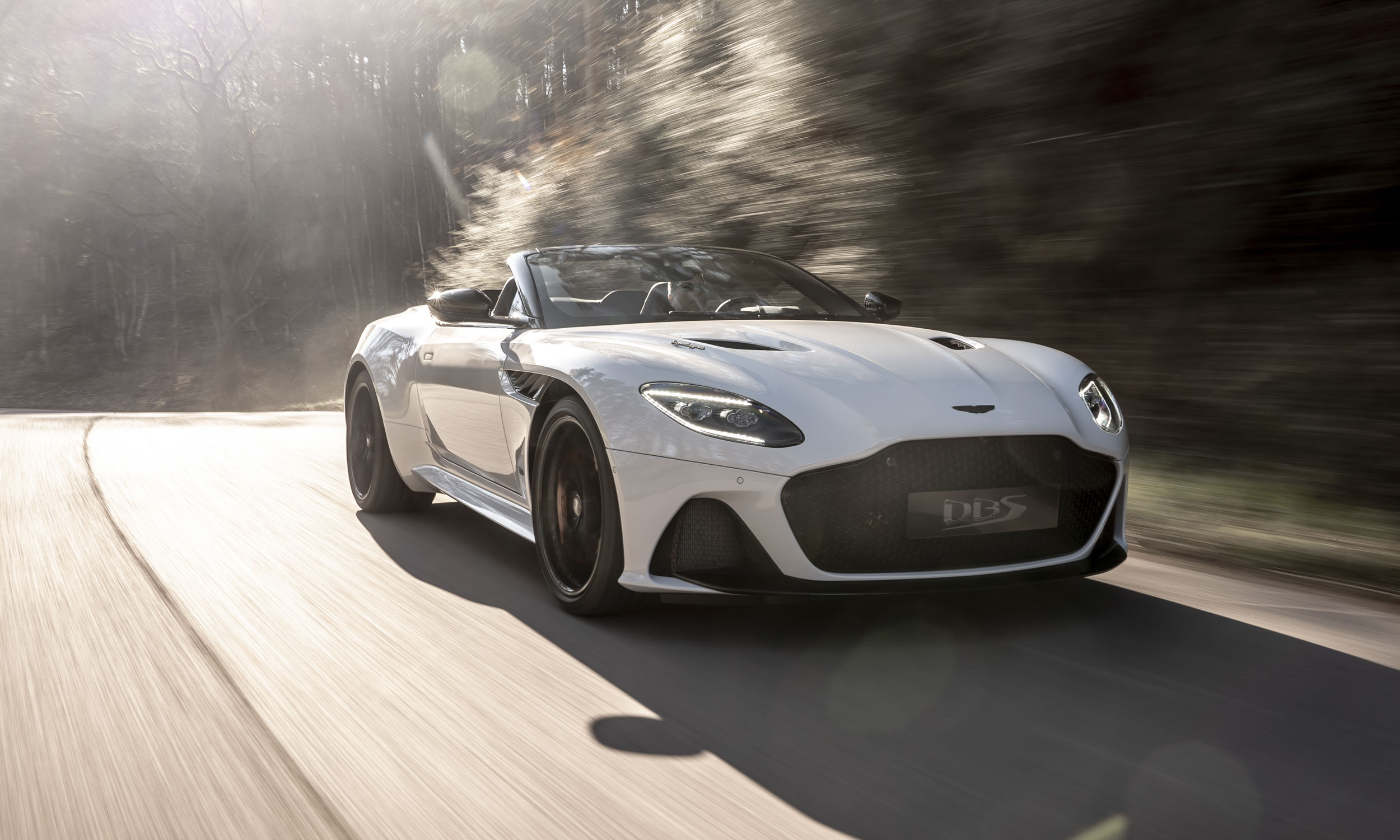 Bold and Functional
Easily distinguishable from the standard DB11 Volante, the DBS Superleggera Volante features a bold grille with a front splitter and air dam that accelerate airflow beneath the front of the car to provide proper downforce while simultaneously feeding air to the front brakes for cooling. The DBS also features a vented hood with a “Superleggera” nameplate along the side. At the rear, quad tailpipes with a double diffuser smooth airflow while reducing lift. 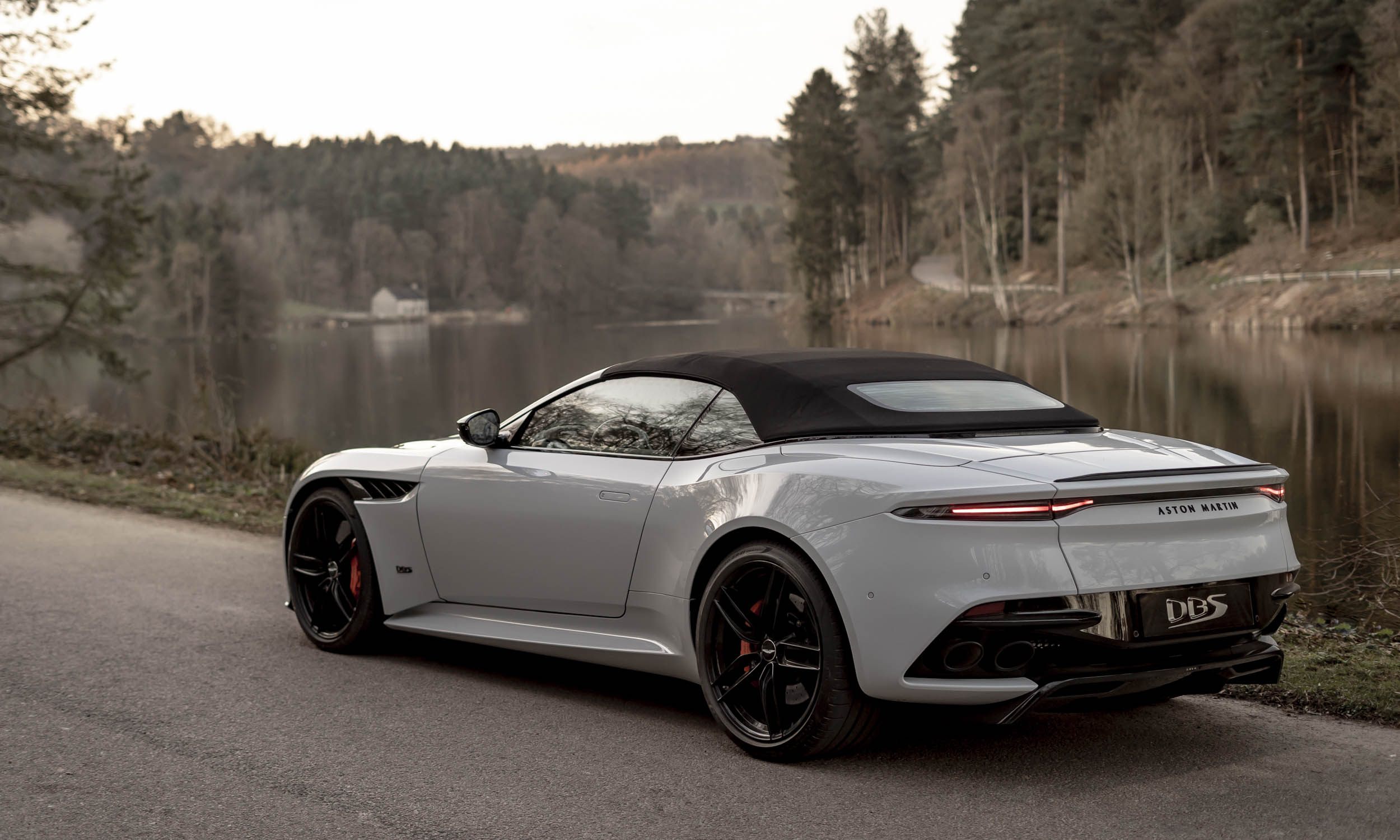 Well-Engineered Top
Aston Martin engineers and designers ensured the convertible top creates a sleek, flowing roofline. Made with eight layers of insulation as well as acoustically enhancing materials, the soft-top provides passengers with the quiet comfort of a coupe when closed. The top has been thoroughly tested by exposure to the heat of Death Valley and the extreme cold of the Arctic Circle. The roof mechanism has been put through more than 100,000 cycles — in effect simulating 10 years of use during a one-month test. 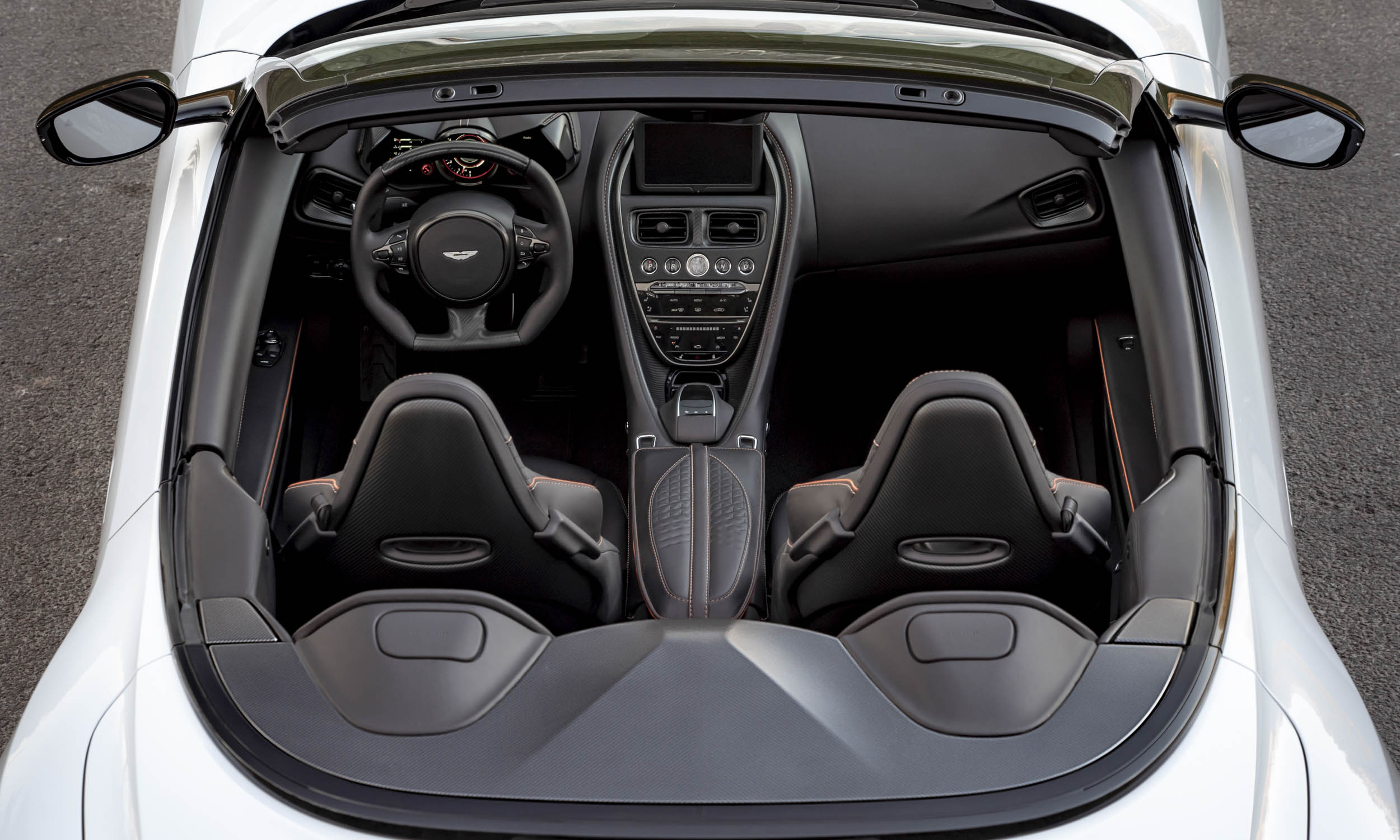 Quick Open
When the soft-top must reluctantly come down, it remains completely hidden under the rear deck while still providing space for luggage in the trunk — although precious little luggage. Operated from inside or via the key fob, the top takes 14 seconds to open and 16 seconds to close. The top can be configured in in eight distinct colors with six headliners to create a signature look. 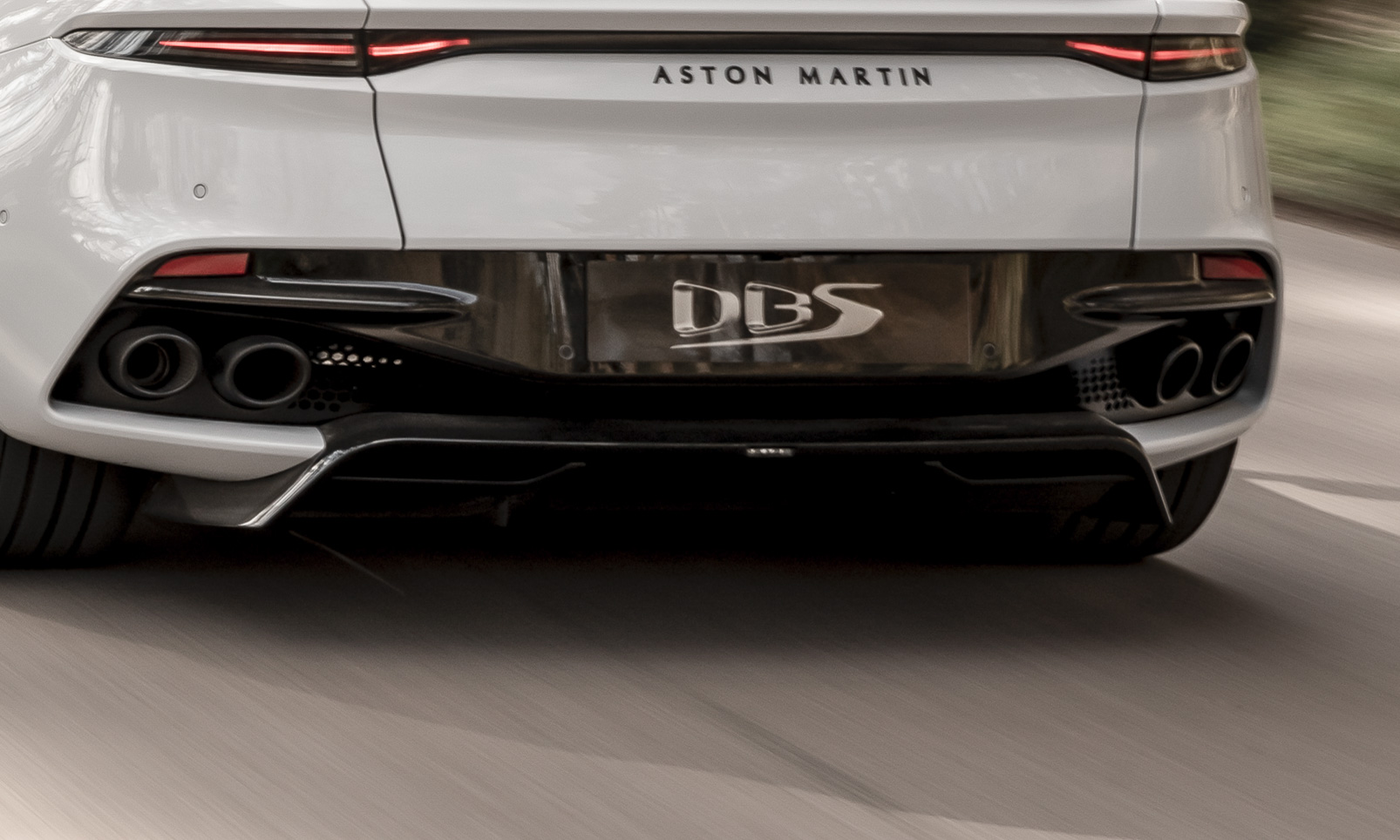 V12 Roar
Even though the DBS Superleggera Volante has a fine audio system, with the top down it’s the lovely sound of the V12 engine that distinguishes the open top from the coupe. The intoxicatingly powerful sound adjusts via dynamic modes the driver chooses. In GT mode the engine note is subdued, but with Sport or Sport Plus mode the acoustics become progressively intense. Drivers can also choose “quiet start,” which doesn’t wake the neighbors with the typical roar of the V12 coming to life. 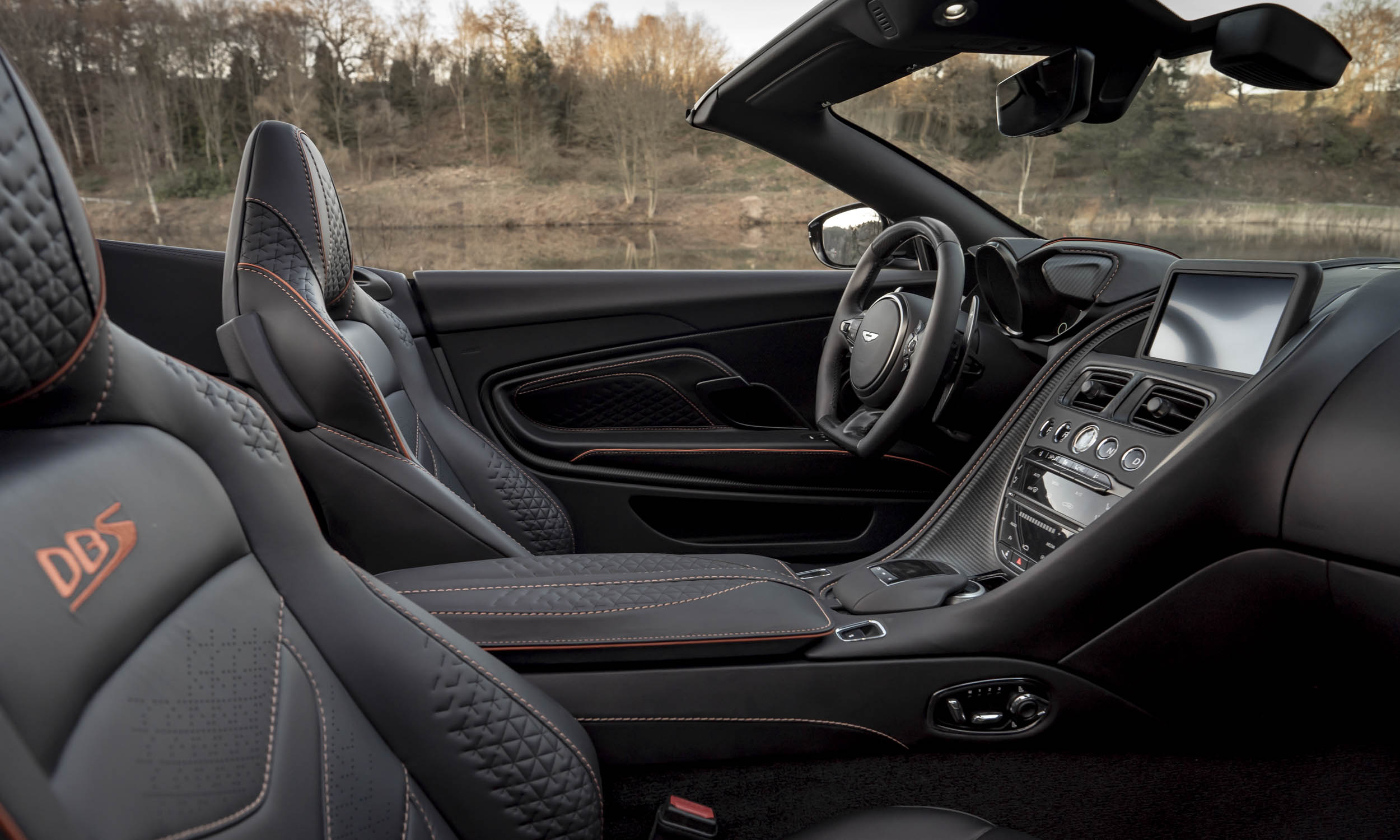 Nothing Like It (As You Like It)
Aston Martin Lagonda President and Group CEO Dr Andy Palmer said, “There is nothing on earth that compares to the roar of an Aston Martin V12 and I believe that the DBS Superleggera Volante provides one of the greatest sensory experiences in the automotive world. This is truly a testament to the no compromise approach of our engineers and designers, to deliver the two key aspects of a convertible Super GT. Exceptional performance in an irresistible form, DBS Superleggera has justifiably won the hearts and minds of Super GT lovers the world over, and the Volante takes this concept to the next level.” 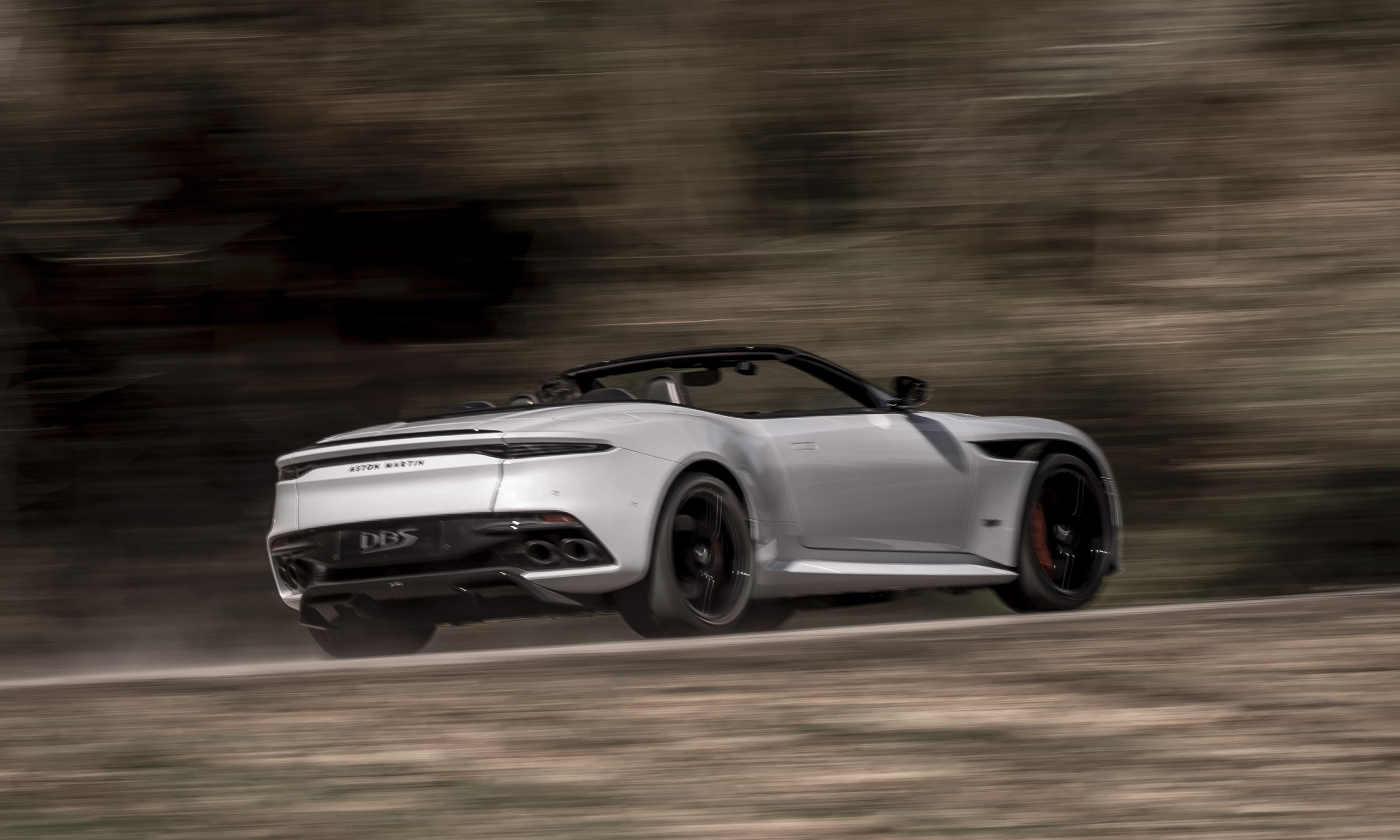 Coming Soon
The Aston Martin DBS Superleggera Volante will begin to arrive on U.S. shores in the third quarter of this year, with a base retail price of $329,100.