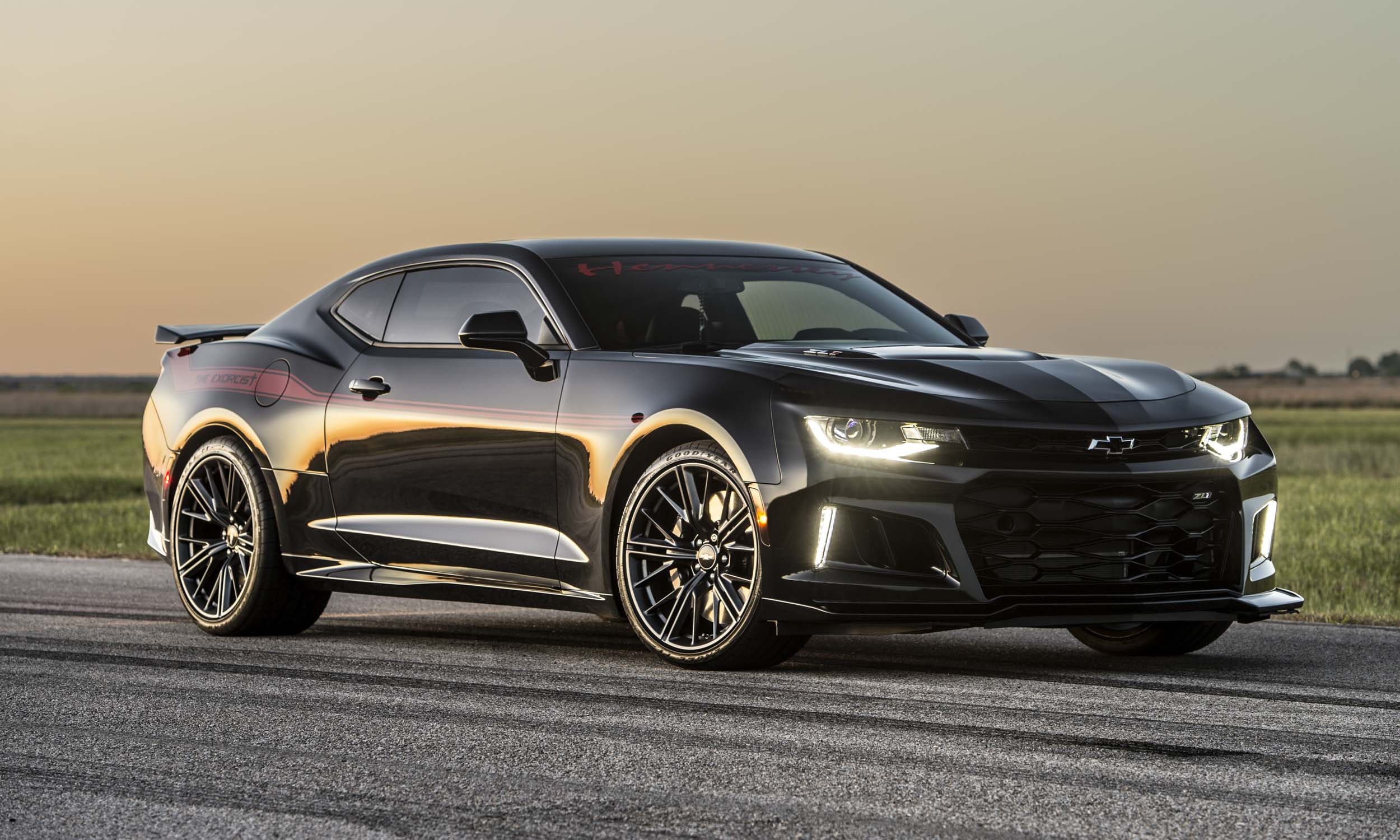 Going Faster
It’s a great time to be an auto enthusiast. The array of high-performance new vehicles on the market today is stunning, ranging from sports cars to sport-utility vehicles — many generating in excess of 700 horsepower. But some buyers will always want a bit more — or a lot more — and Hennessey Performance Engineering has what they’re looking for. Offering performance upgrades for a wide variety of vehicles, Hennessey is all about making fast cars go faster. 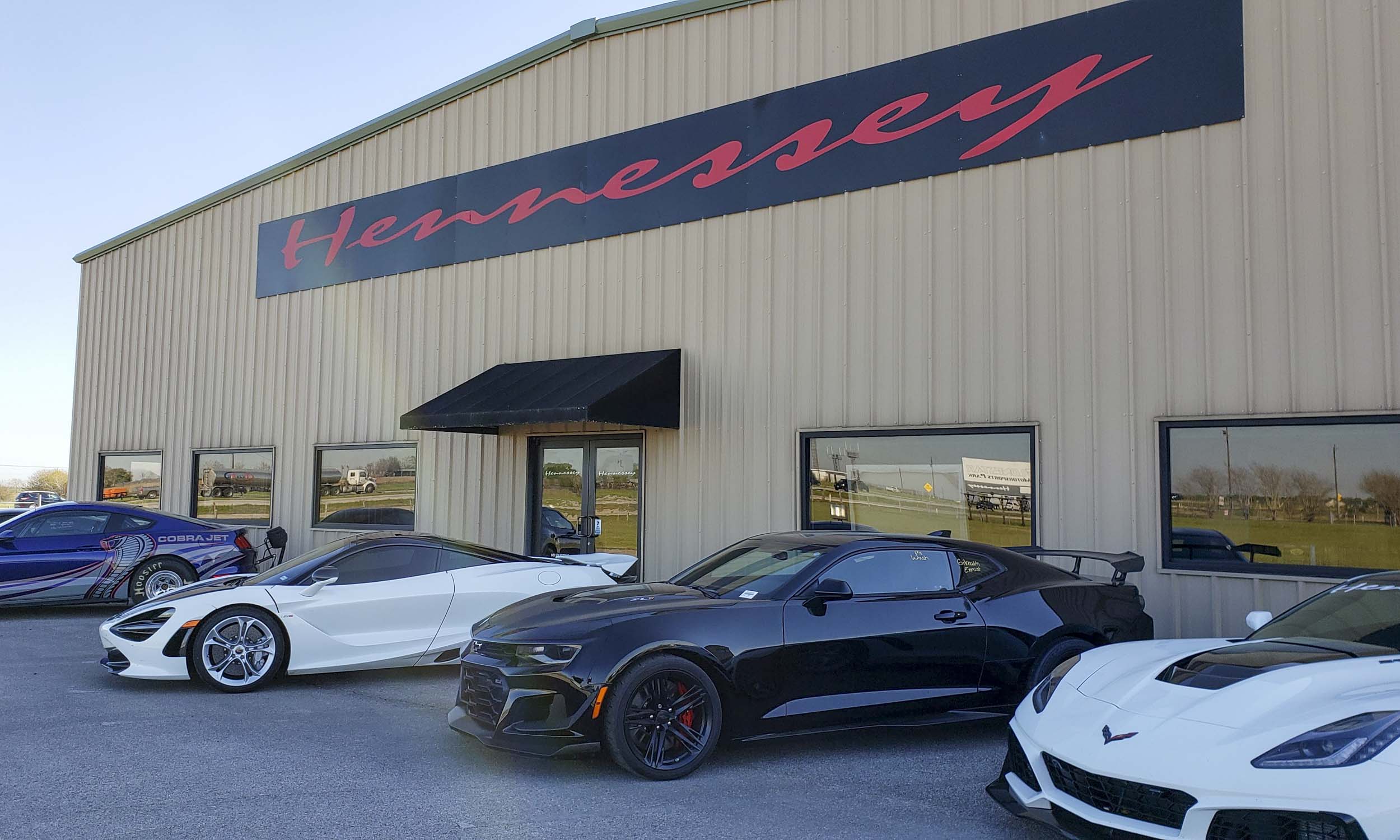 Car Nut’s Toy Store
We paid a visit to Hennessey’s facilities in Sealy, Texas, and what we experienced was more akin to a car nut’s toy store than an automotive shop. As we arrived in our HPE-modified McLaren 720S (more on this 900-horsepower beast later), we parked in front of a large building next to several thousand horsepower in a few modified Corvettes, a Ford Mustang drag racer and a 1000-horsepower Camaro Exorcist — a perfect introduction to what HPE does with cars for customers all over the world. 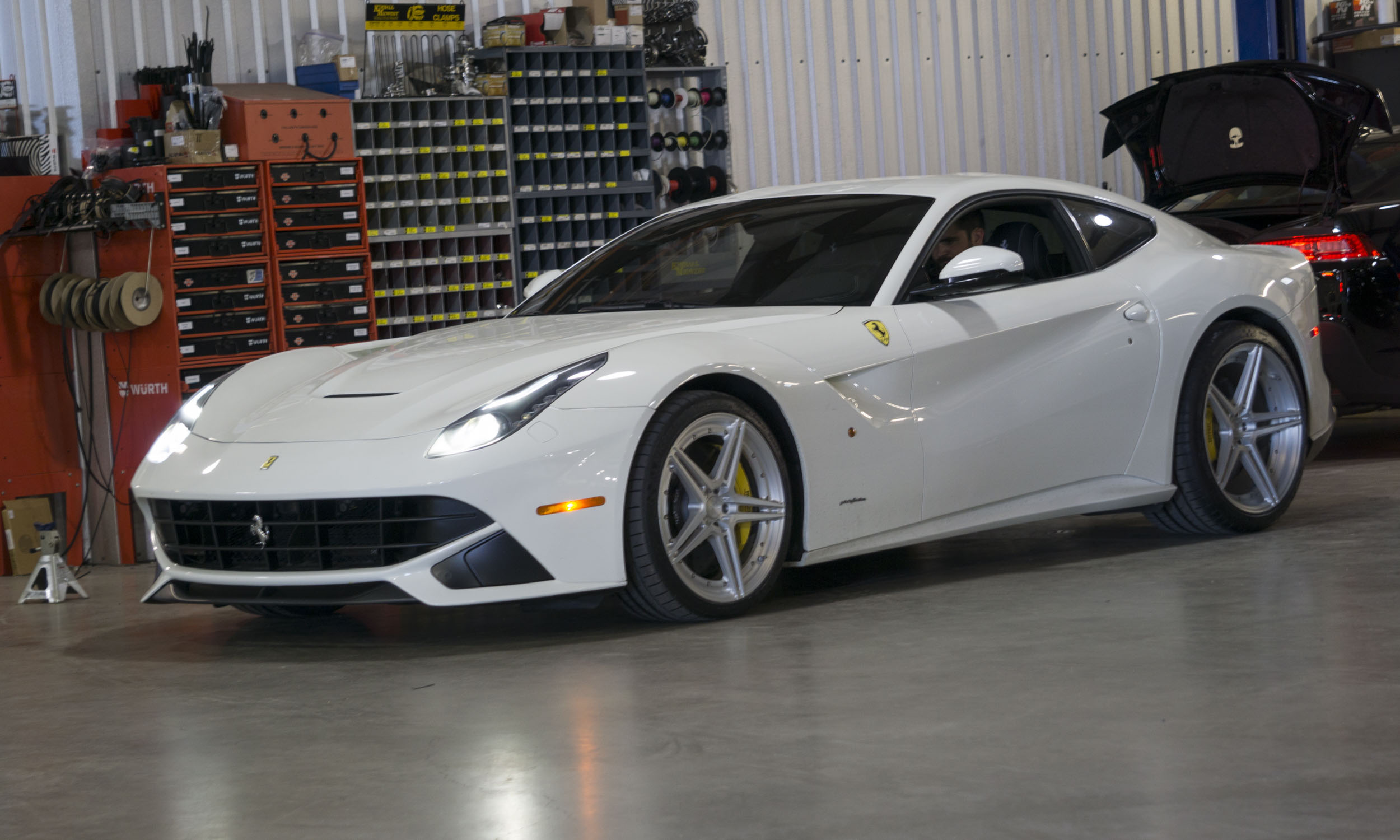 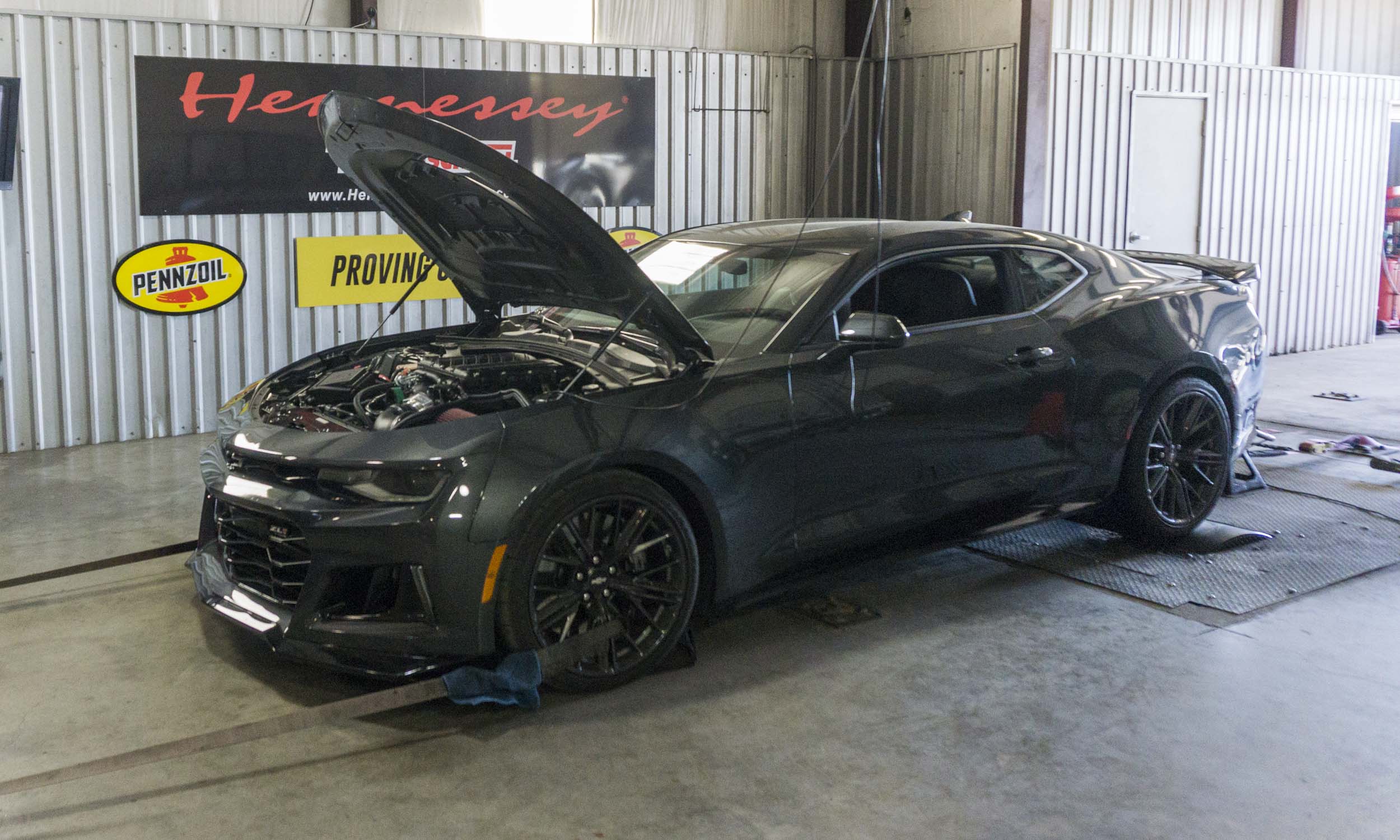 Made in Texas
Inside the Hennessey building is a proper showroom featuring some of HPE’s latest creations, but in back is where the magic happens. The busy shop features 20 service bays with 16 vehicle lifts as well as a welding and metal fabrication shop. There’s also a Dynojet 28C chassis dynamometer that can handle up to 1800 horsepower at the rear wheels. 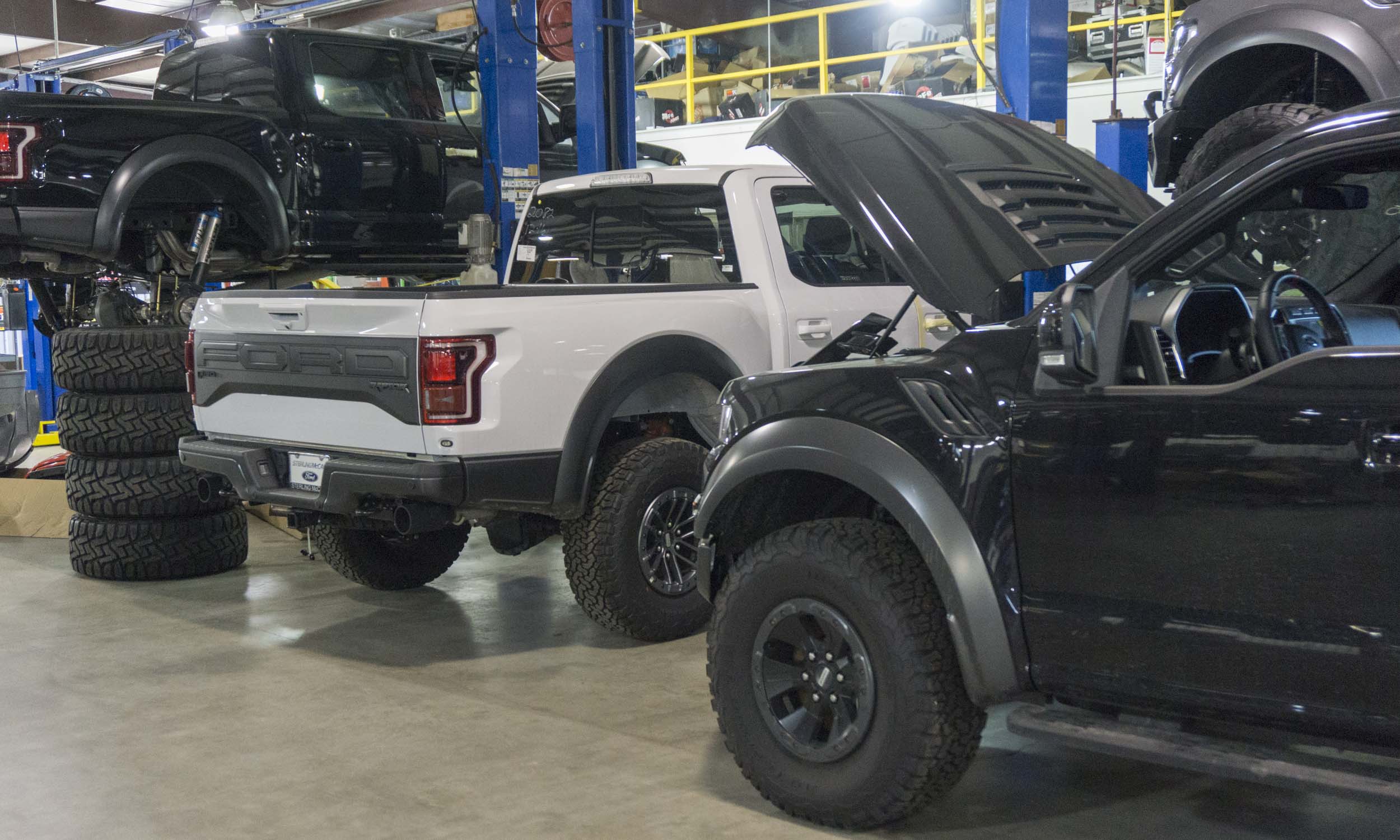 Trucks and SUVs
Hennessey Performance Engineering works on all sorts of vehicles, although trucks and SUVs are currently the bulk of the company’s business — which makes sense, since these utilitarian vehicles are the hottest sellers in America. When we toured, a few of the bays were taken up by muscle cars — Chevrolet Camaros, Dodge Chargers and Ford Mustangs — but the bulk of the HPE shop contained Ford Raptors and Jeep Grand Cherokee Trackhawks. Outside the shop, a line of Ford F-150 Raptors awaited their turn to be transformed into VelociRaptors. 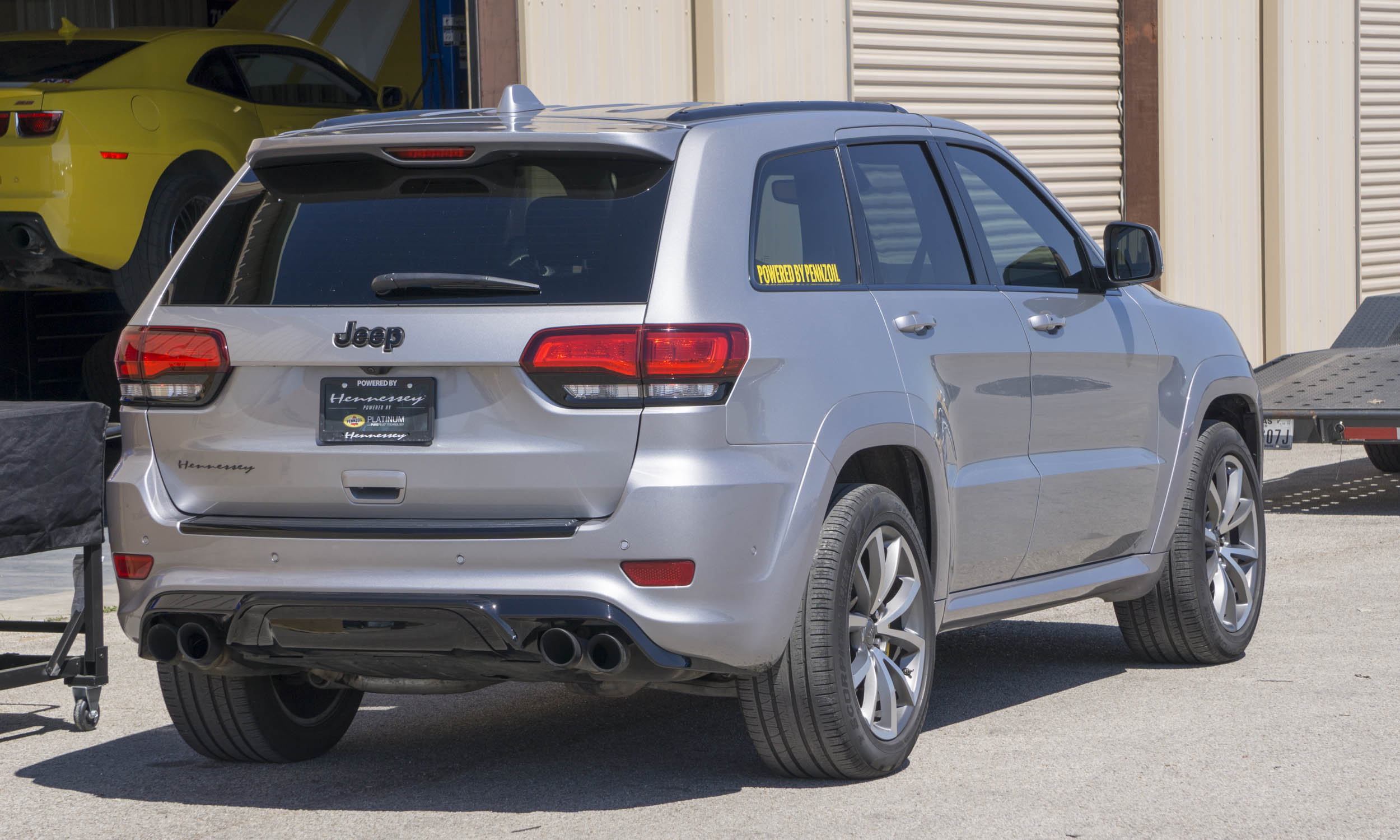 Factory-Like Finish
We had a chance to have an up-close, hands-on experience with a few of the finished products rolling out of the Hennessey Performance Engineering facility, and came away impressed with the fit and finish as well as each vehicle’s excellent drivability — as if they had come from the factory with the added performance. This 1200-horsepower Jeep Trackhawk HPE1200 is an excellent example. Best of all, HPE provides a full warranty on all of the work. 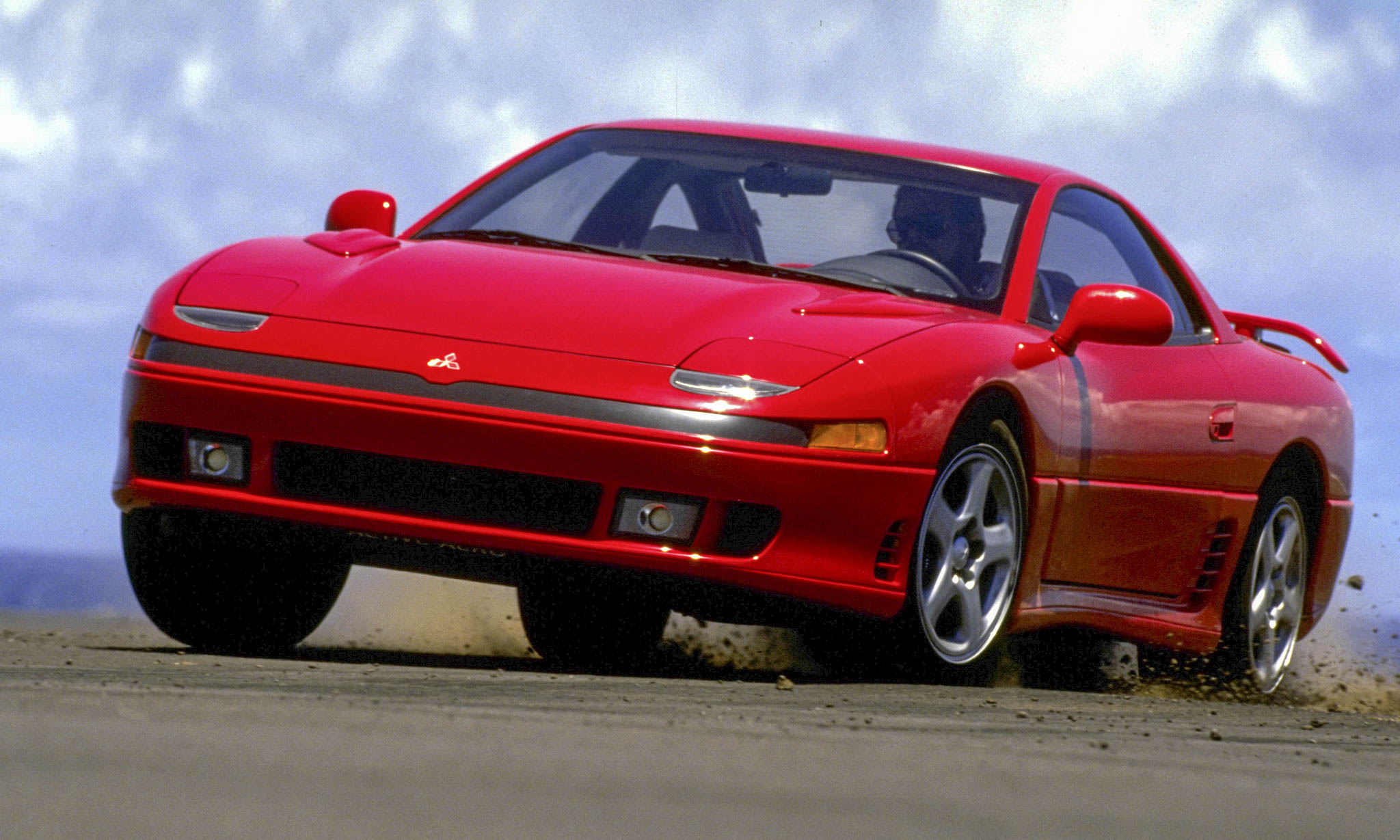 How It All Started
The genesis of Hennessey’s business began in a way one might expect. John Hennessey purchased a Mitsubishi 3000GT VR4 in 1991 and developed his own modifications to give the all-wheel-drive sports car more power and better performance. Hennessey competed in a number of events that year, including a successful completion of the Pikes Peak Hill Climb and setting a class record at the Bonneville Salt flats with a top speed of 177 mph. Late that year he founded Hennessey Performance Engineering. Since that time, HPE has modified more than 10,000 vehicles for customers around the world. 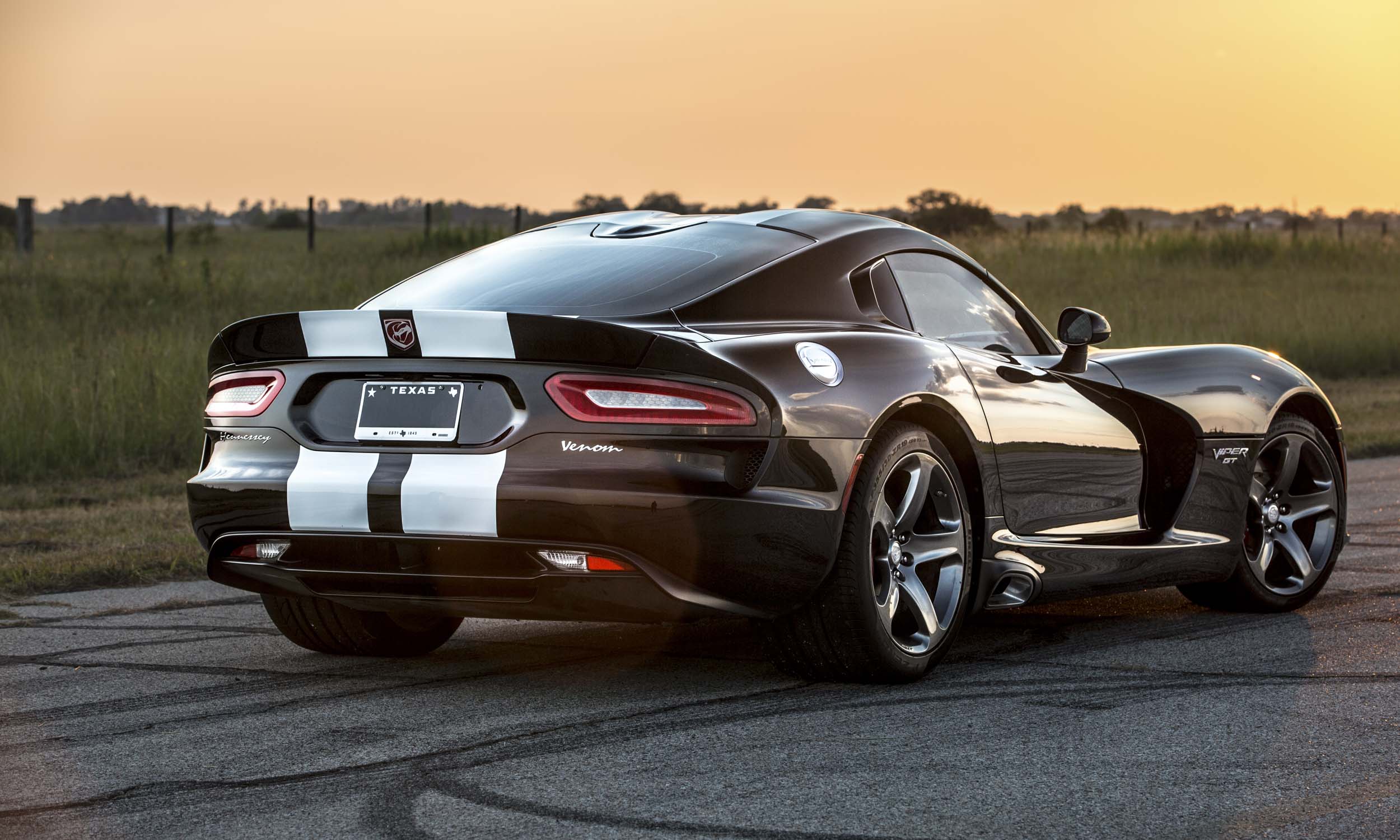 Viper Venom
The Dodge Viper — an extreme sports car right from the factory — helped put Hennessey on the map. Hennessey Performance Engineering created a modified Dodge Viper Venom 500 and Venom 550, both of which posted sub-4-second sprints to 60 mph when tested by Motor Trend — a rare feat for any street car in the early 1990s. In 1996 the Viper GTS debuted, and HPE modifications created the 650-horsepower Viper 650r. The next year the 650r became the first Viper to break 200 mph. Eventually even more powerful Vipers emerged from HPE. 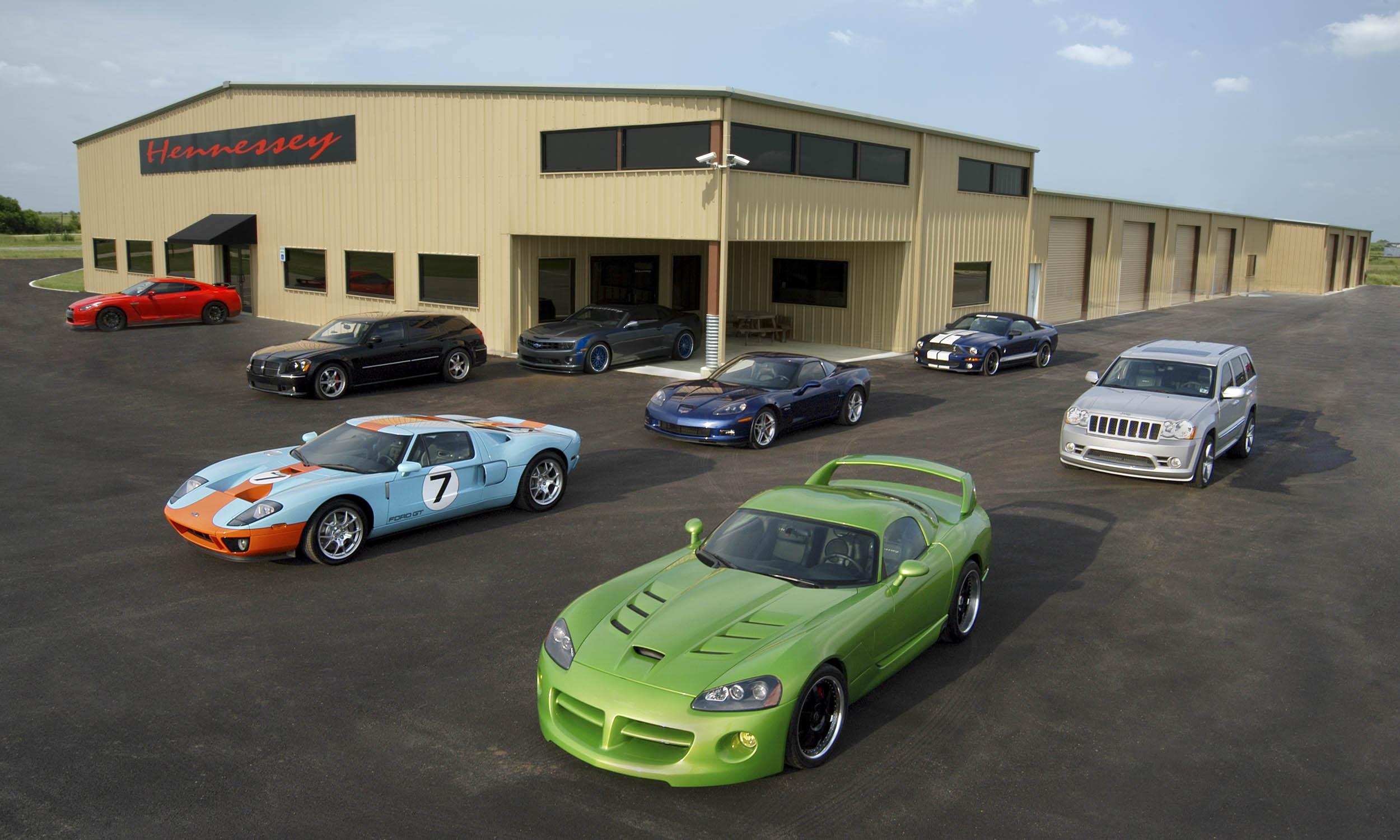 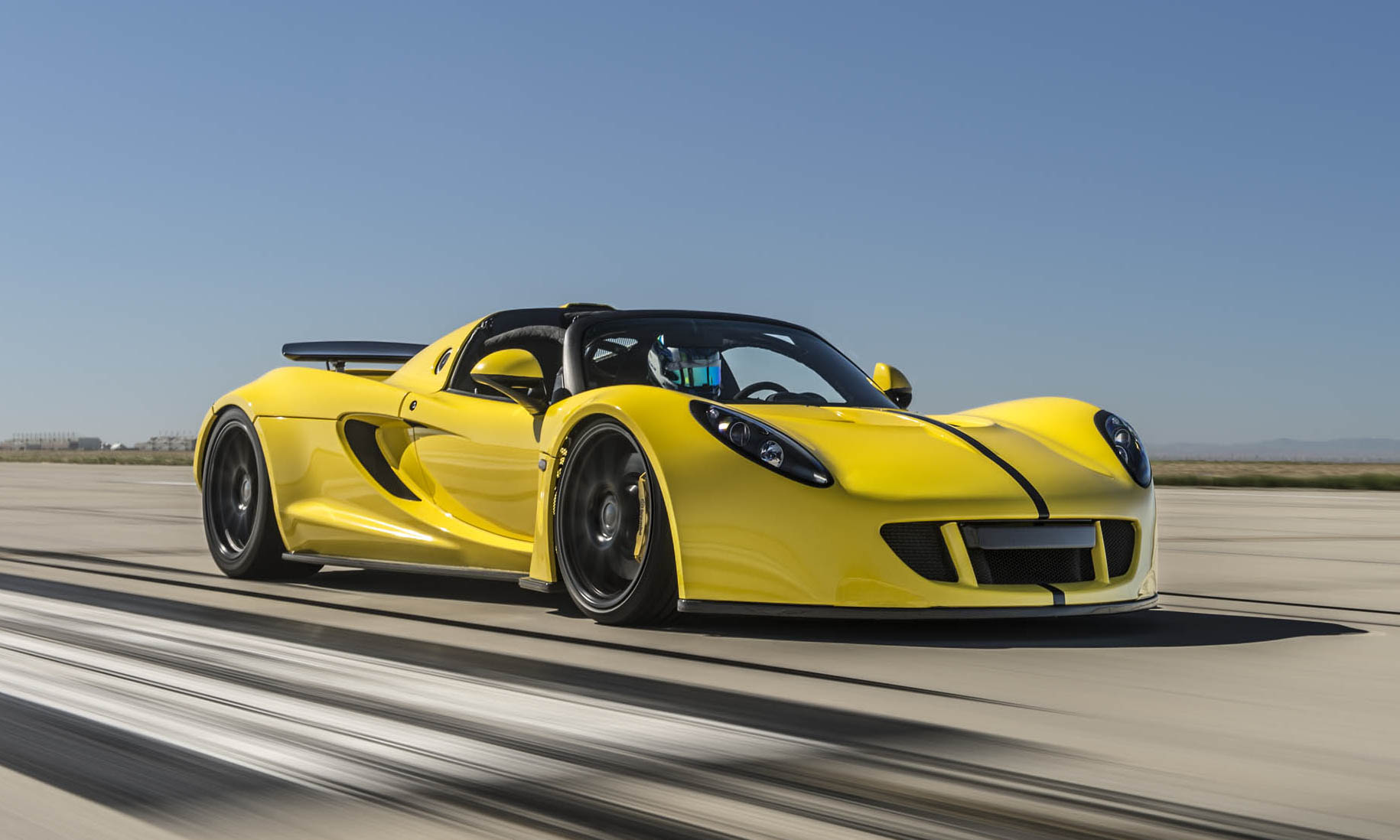 Venom GT
Although Hennessey built his business upgrading existing vehicles, in 2006 the company began planning to build its own high-performance sports car. With a desire to combine high power with weight reduction, Hennessey created a new model based on the lightweight Lotus Elise / Exige platform. The Venom GT Prototype made its debut in 2010, with the first production delivery late that year. 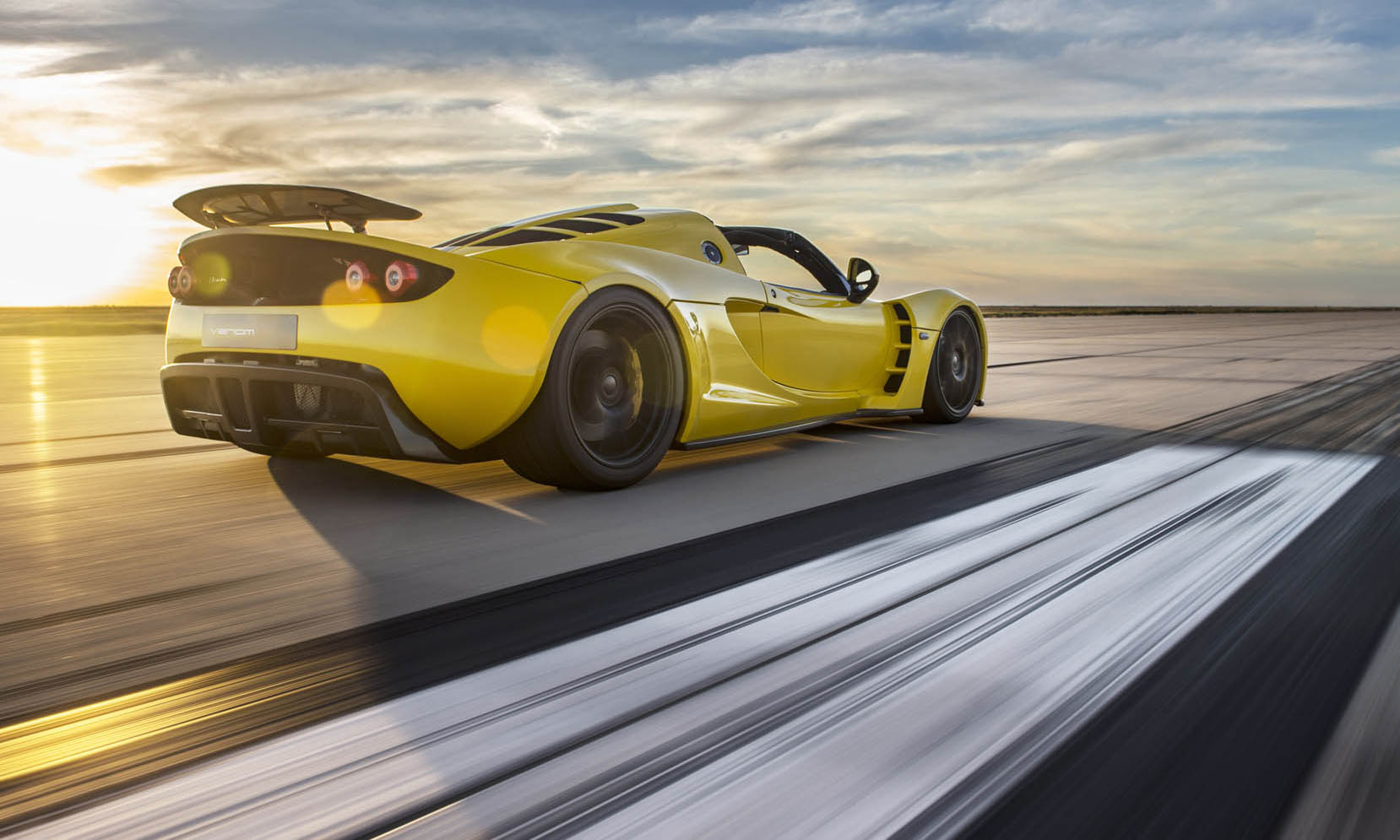 Extreme Performance
The Venom GT is powered by a 7.0-liter twin turbo V8 engine that produces a staggering 1244 horsepower and 1155 lb-ft of torque. At the time performance was better than nearly any other street car on the road, streaking to 60 mph in a blistering 2.7 seconds and passing 100 mph in a mere 5.6 seconds. The Venom could reach well beyond 100 mph, reaching 200 mph in about 15 seconds with a quarter-mile sprint taking 9.92 seconds. 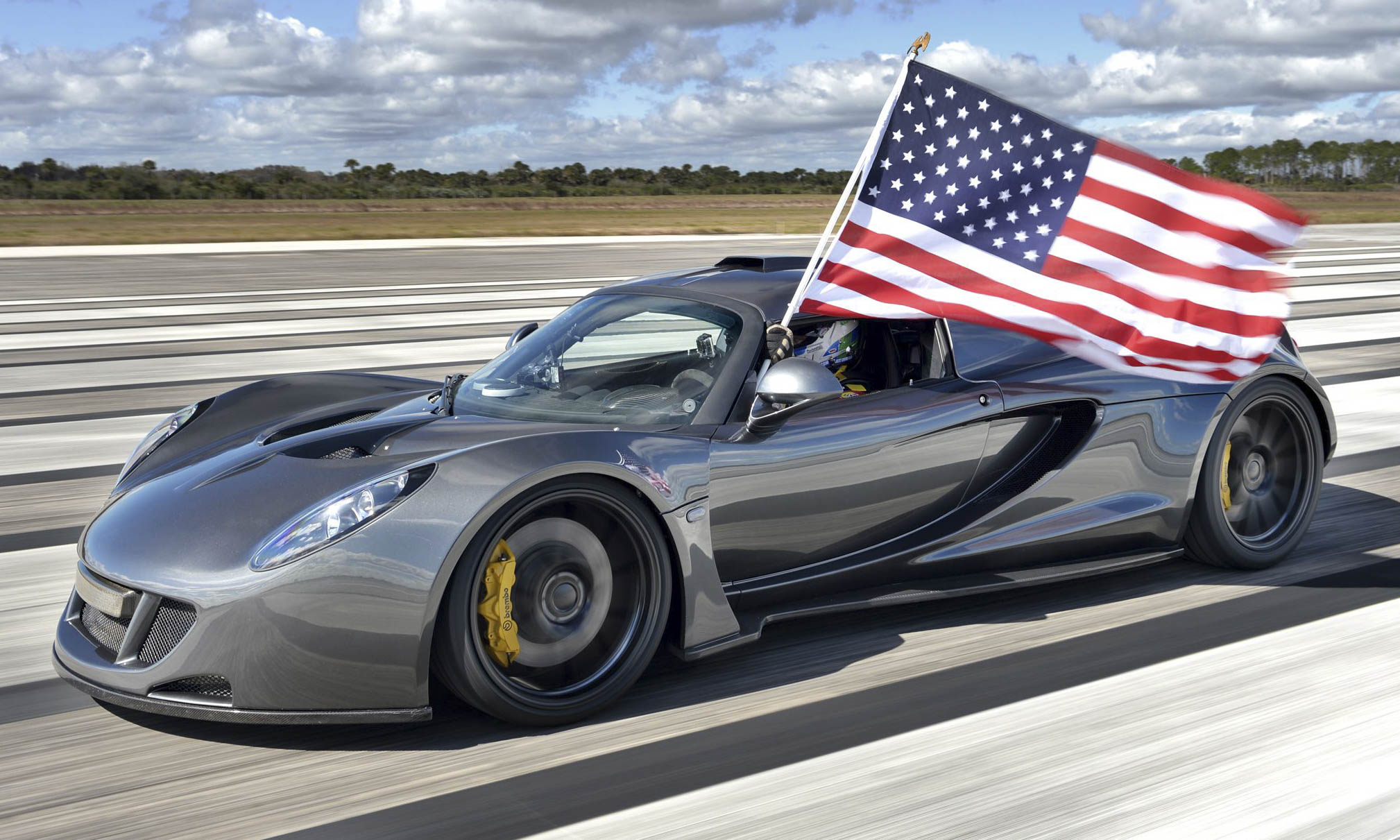 Record Breaker
In 2013 Hennessey took the Venom GT to Ellington Field Airport in Houston, where it set a Guinness World Record as the quickest production car to reach 300 km/h (186) mph — in an incredible 13.63 seconds. The following year the Venom GT reached an unofficial record of 270.49 mph. Ultimately 13 Venom GTs were produced, with the last one delivered in 2017. 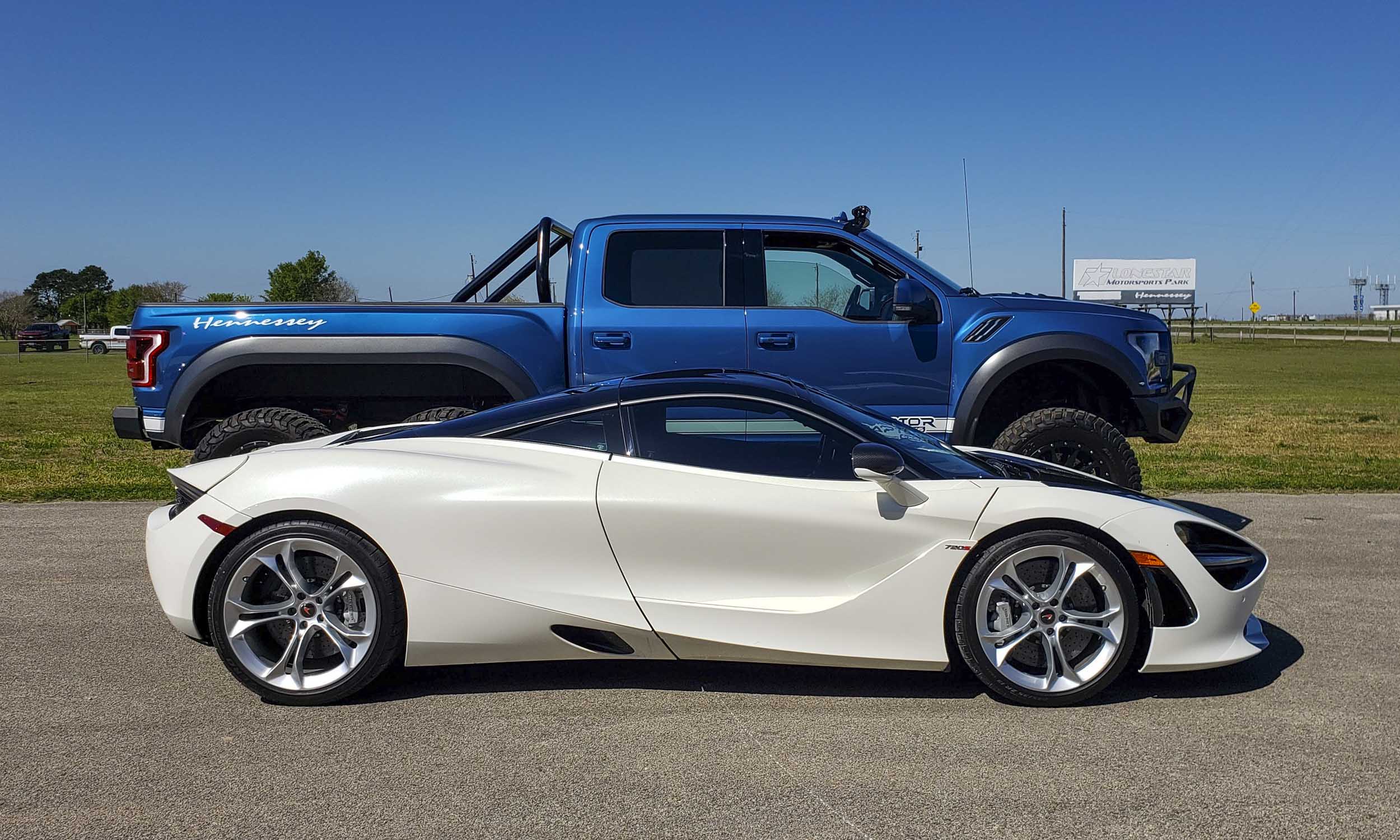 Sampling the Goodies
During our visit to Hennessey Performance Engineering’s facilities in Texas, we had the opportunity to spend some seat time in a few of HPE’s creations, headlined by two extremes: the Hennessey VelociRaptor 6X6 and the McLaren 720S HPE900. 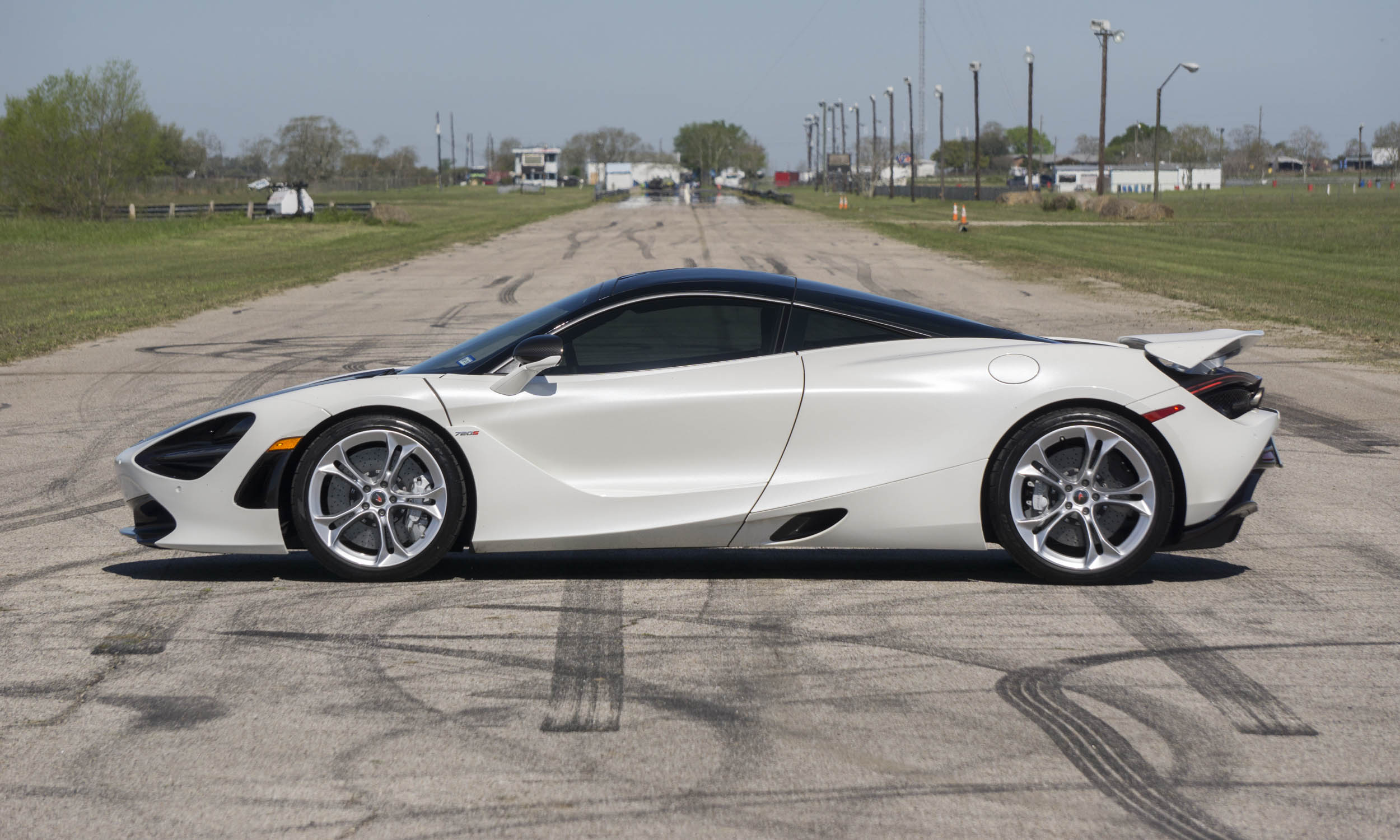 McLaren 720S HPE900
Hennessey notes that vehicle modifications can be subtle if that’s what the customer prefers. For example, this McLaren looks like a standard 720S — exotic looking of course, but still like any other 720S. But this McLaren has been updated with high-flow air filters, ECU recalibration, an upgraded turbo and intercooler, and a custom Hennessey stainless steel exhaust. The end result is the 720S HPE900, with around 900 horsepower and a verified 809 horsepower at the rear wheels — about 200 more horses than the standard 720S. 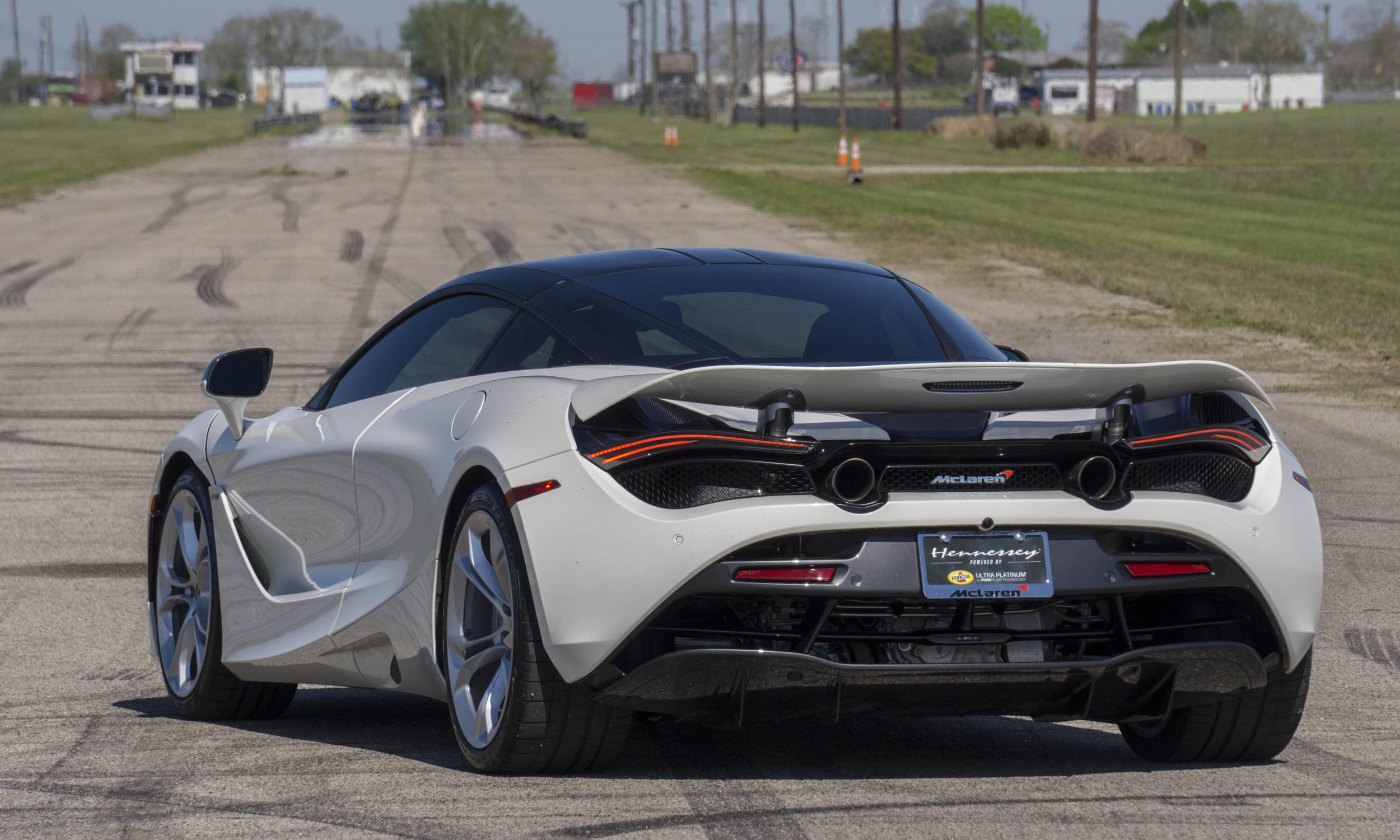 Crazy Fast
The McLaren 720S is an amazing high-performance sports car, but the folks at Hennessey Performance Engineering made it even better. We spent a bit of time in this monster McLaren, and it’s hard to say which is more impressive: the ease at which this car cruises down the freeway or around town, or the mind-bending acceleration that moves it past 60 mph in around 3 seconds with no sign of slowing. On Hennessey’s quarter-mile dragstrip located next to the main facility, the McLaren was still accelerating with gusto at 130 mph when we finally had to reign in the speed at the end of the strip. 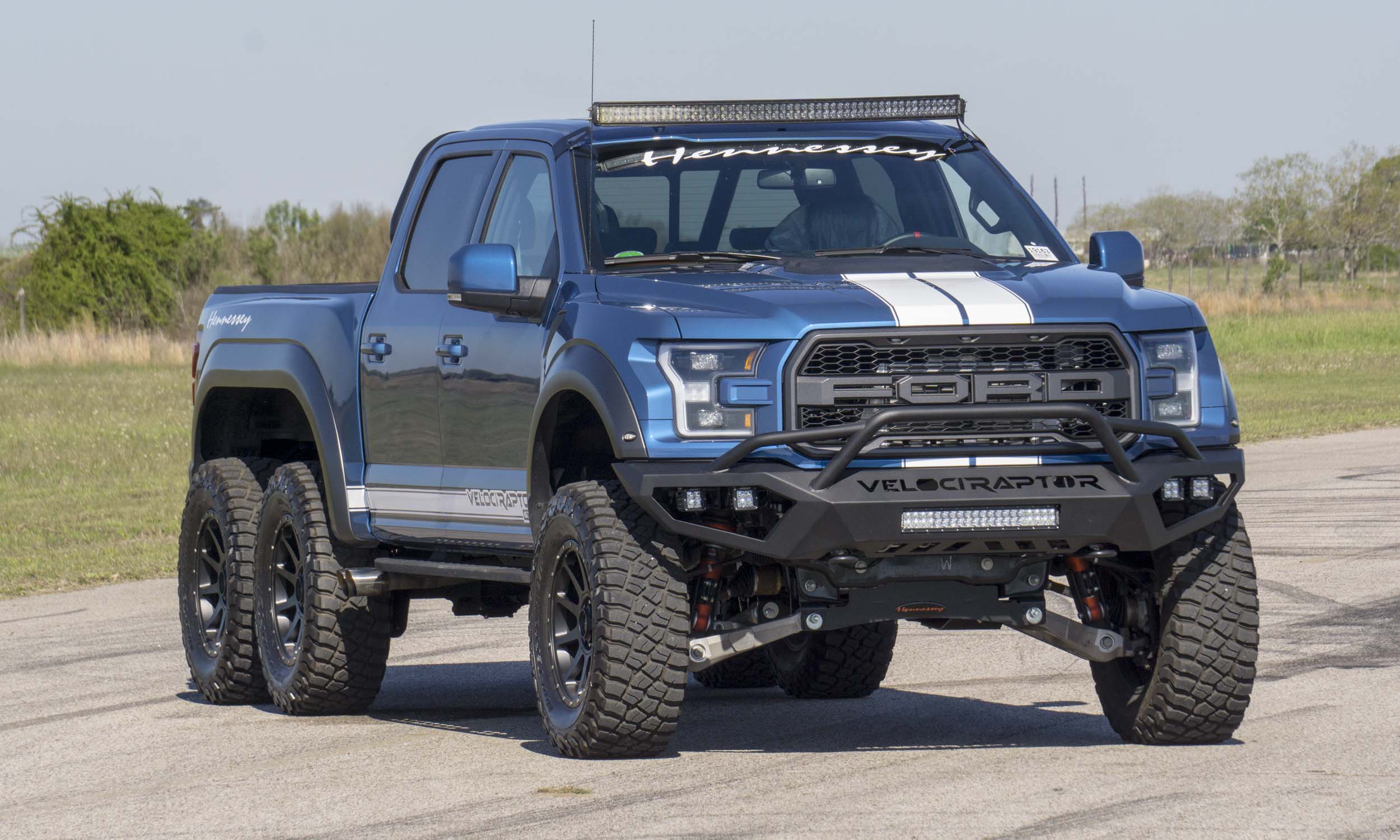 HPE VelociRaptor 6X6
Hennessey offers numerous enhancements for Ford’s F-150 Raptor, but making it a 6-wheel-drive vehicle is the ultimate upgrade. The truck we drove is based on the 2019 Raptor but features 6X6 locking rear axles, upgraded Fox suspension, custom 20-inch wheels with larger off-road tires, special front and rear bumpers and an array of LED lights. Should we mention it again? The VelociRaptor is a 6X6 — meaning not only does it have six wheels, it also boasts 6-wheel drive! 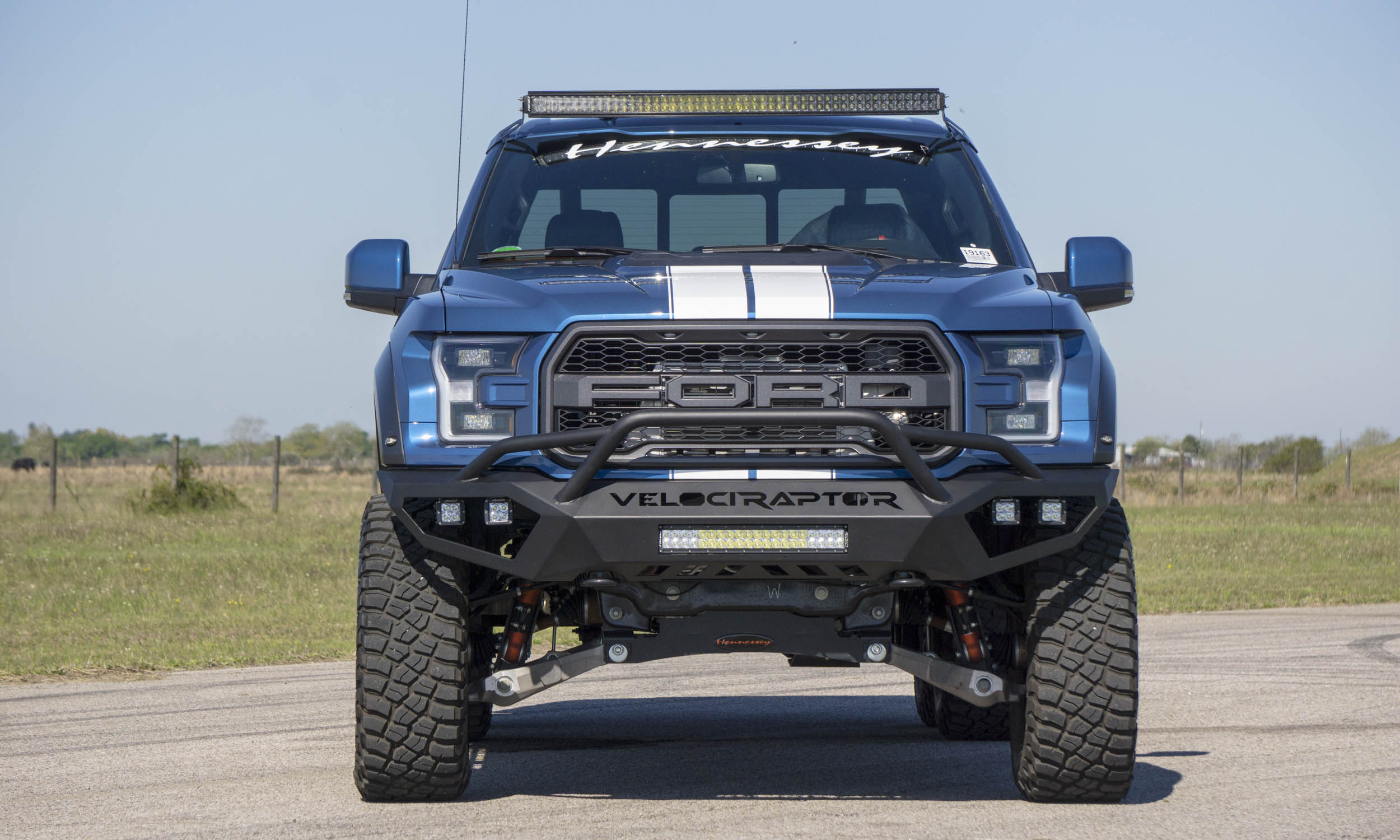 More Power
While this VelociRaptor’s upgrades will certainly capture the attention of onlookers, Hennessey is best known for its work under the hood. The truck we drove has upgraded twin turbochargers, stainless steel exhaust, an upgraded air-to-air intercooler and a retuned factory computer that results in 600-plus horsepower under the hood. Aside from being one of the largest pickup trucks on the road, the VelociRaptor handles well. The ride is comfortable with a stylish interior that carries over from the stock Raptor. Ultimately it drives like a regular pickup truck — which is meant as a sincere compliment. 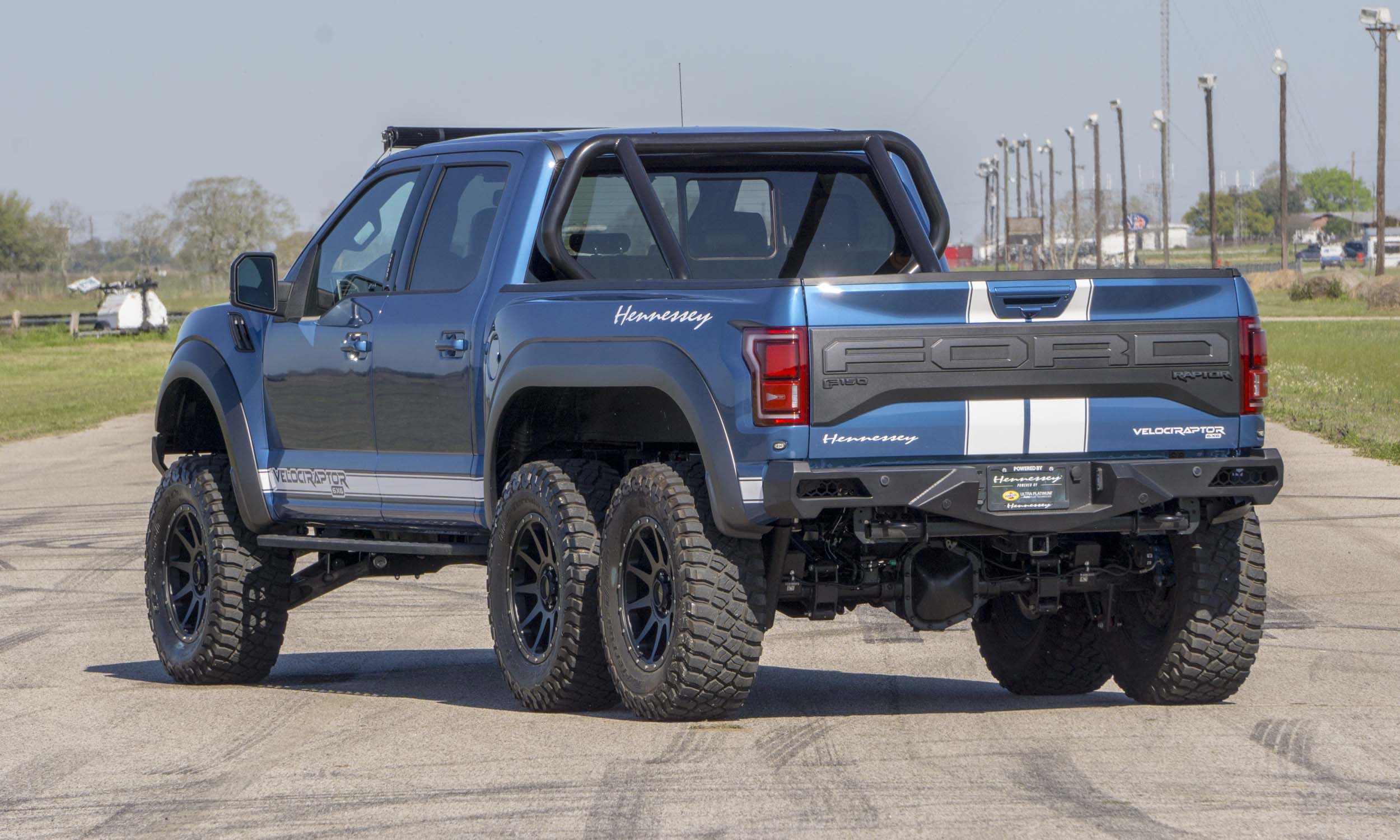 Surprisingly Quick
Given the VelociRaptor’s extreme mass, the additional power under the hood is most beneficial. At full throttle on Hennessey’s dragstrip, the VelociRaptor roars as it should, and acceleration is surprisingly strong. Clearly this is not a vehicle intended for the dragstrip, but we did approach triple digits before employing the truck’s powerful Brembo brakes to bring this massive Raptor in for a landing. 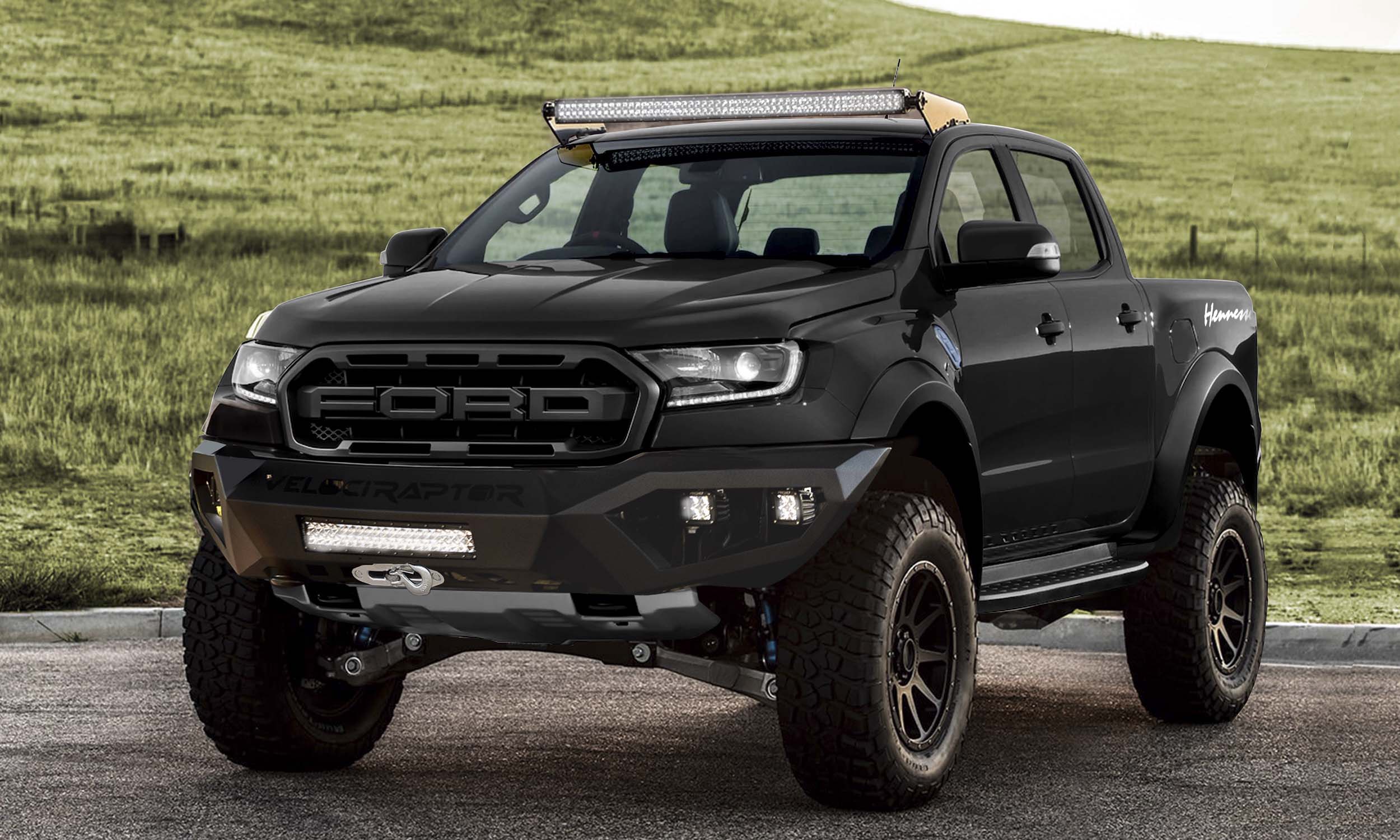 What’s Next?
Given the clear popularity of trucks and SUVs, it seems logical that the next vehicles on Hennessey Performance Engineering’s radar are the new midsize pickup trucks — Ford Ranger and Jeep Gladiator. No word yet on final plans for Gladiator; however, HPE has already started work on the upcoming Ranger VelociRaptor. 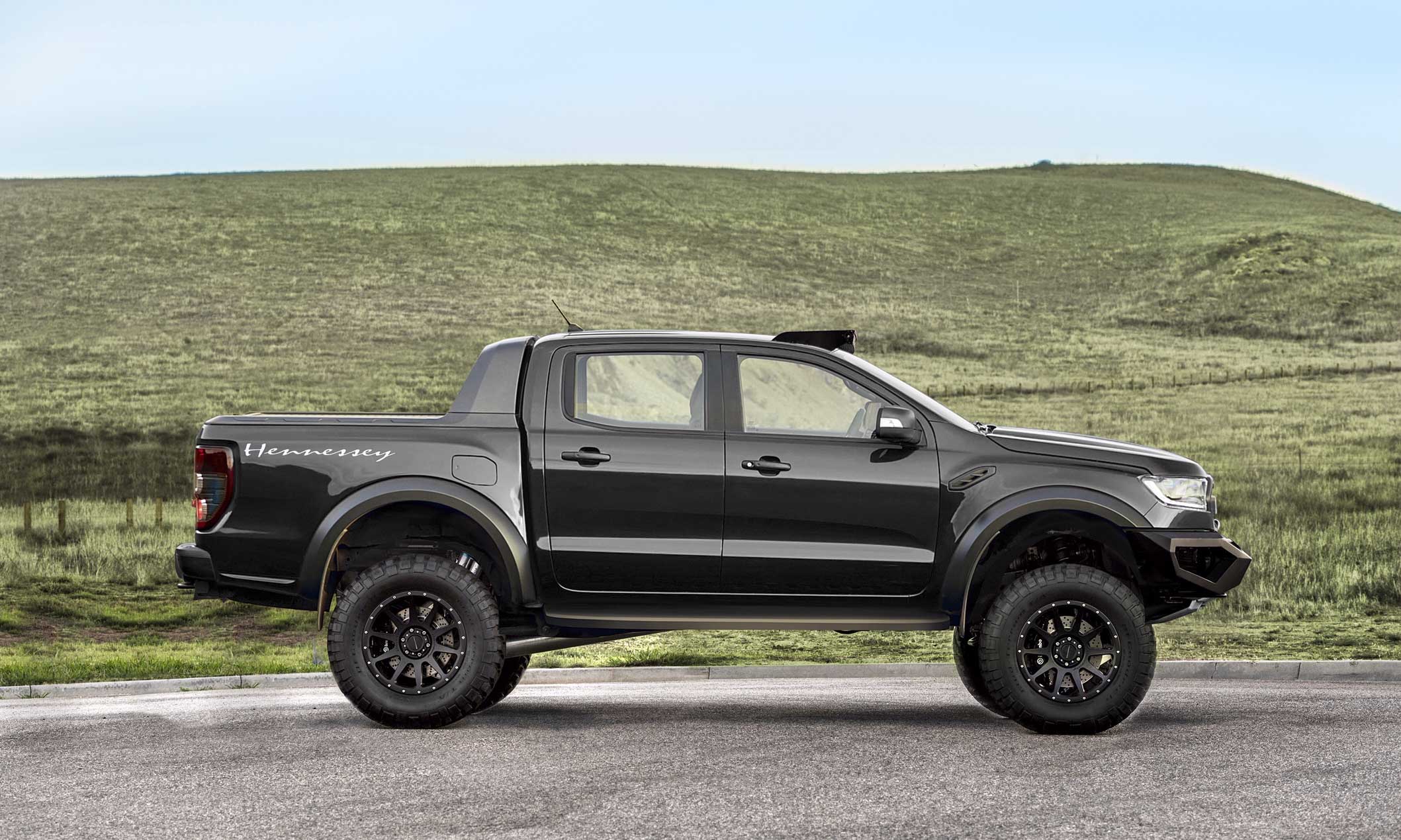 Ranger VelociRaptor
With the success of the VelociRaptor conversion for the F-150, Hennessey Performance Engineering is getting ready to launch the Ranger VelociRaptor. We drove the prototype, which looks like a standard Ranger but has been upgraded with numerous engine modifications to bump power to 350 horses versus the stock 270 ponies. We happily took the prototype out on HPE’s dragstrip. Although the stock truck doesn’t feel slow, the added power is certainly welcome. Hennessey Performance Engineering plans to outfit the Ranger VelociRaptor in a way that befits the name — in addition to the added power, modifications will include a unique VelociRaptor bumper with an LED light bar, a roof-mounted LED bar, fender flares, a 4-inch suspension lift kit and 17-inch alloy wheels with BF Goodrich All-Terrain tires. 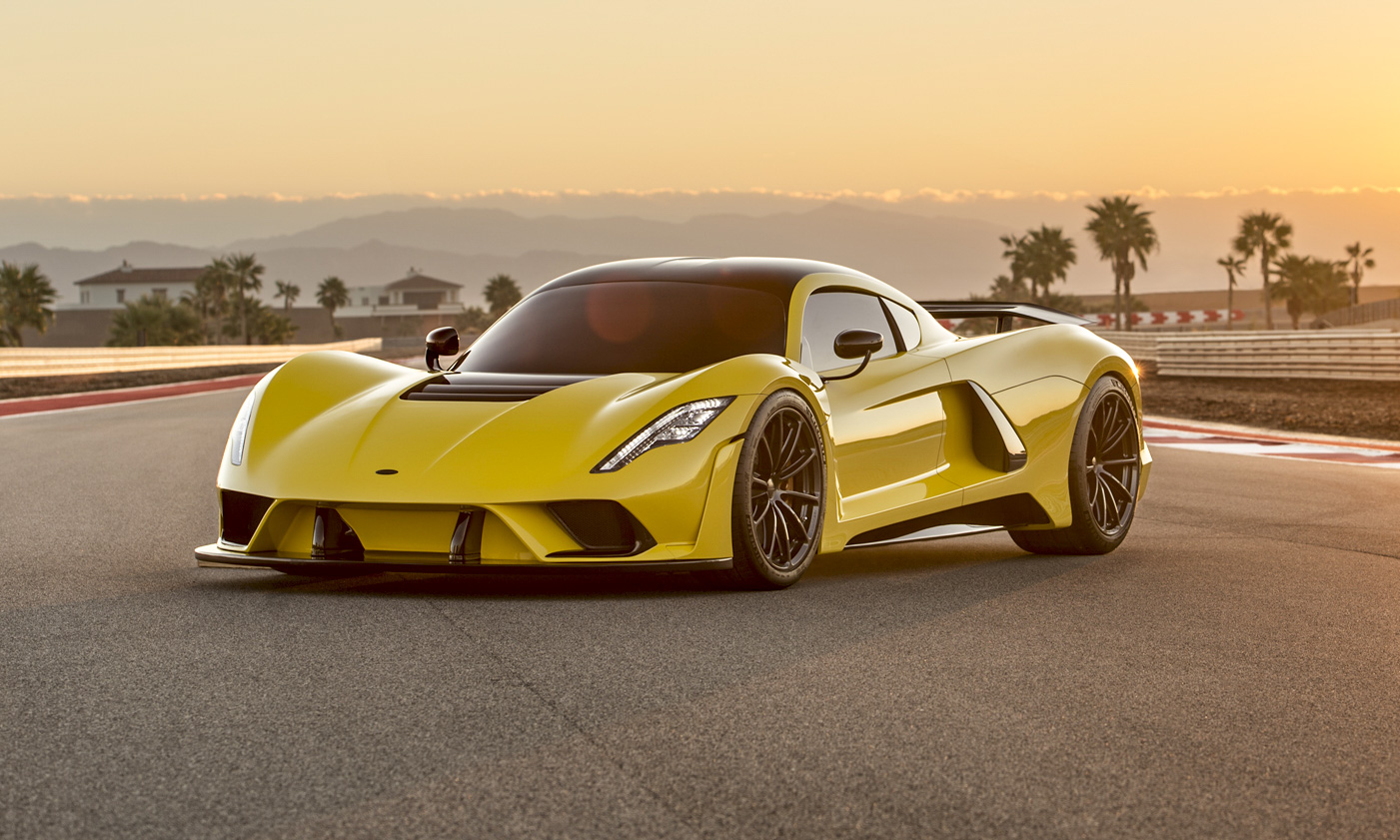 Venom Successor
While his company keeps busy filling orders, John Hennessey has turned his attention to the next big project to come from HPE — the Venom F5. Unlike the Venom GT, the F5 will be all new from the ground up and is expected to exceed the stunning stats of its predecessor. According to Hennessey, the F5 is designed to “be the absolute fastest road car on earth.” 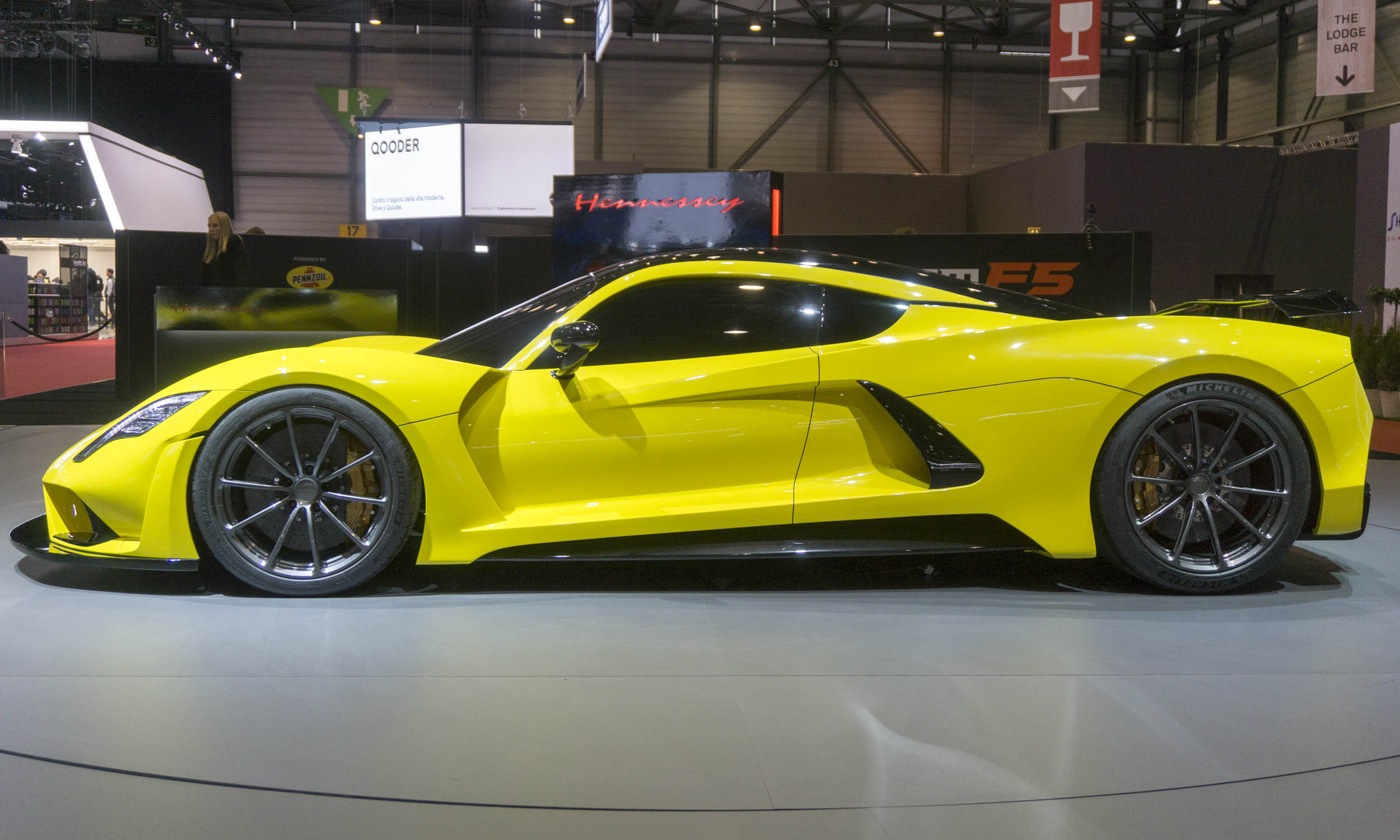 Venom F5
The Venom F5 features a new chassis and a carbon fiber body shaped to achieve the least amount of drag possible. With active aero components, the F5’s coefficient of drag is a mere 0.33 — a very slippery car. Although aerodynamics is important, so is weight savings. The lightweight chassis and carbon fiber body enable the F5 to tip the scales at 2,950 lbs. 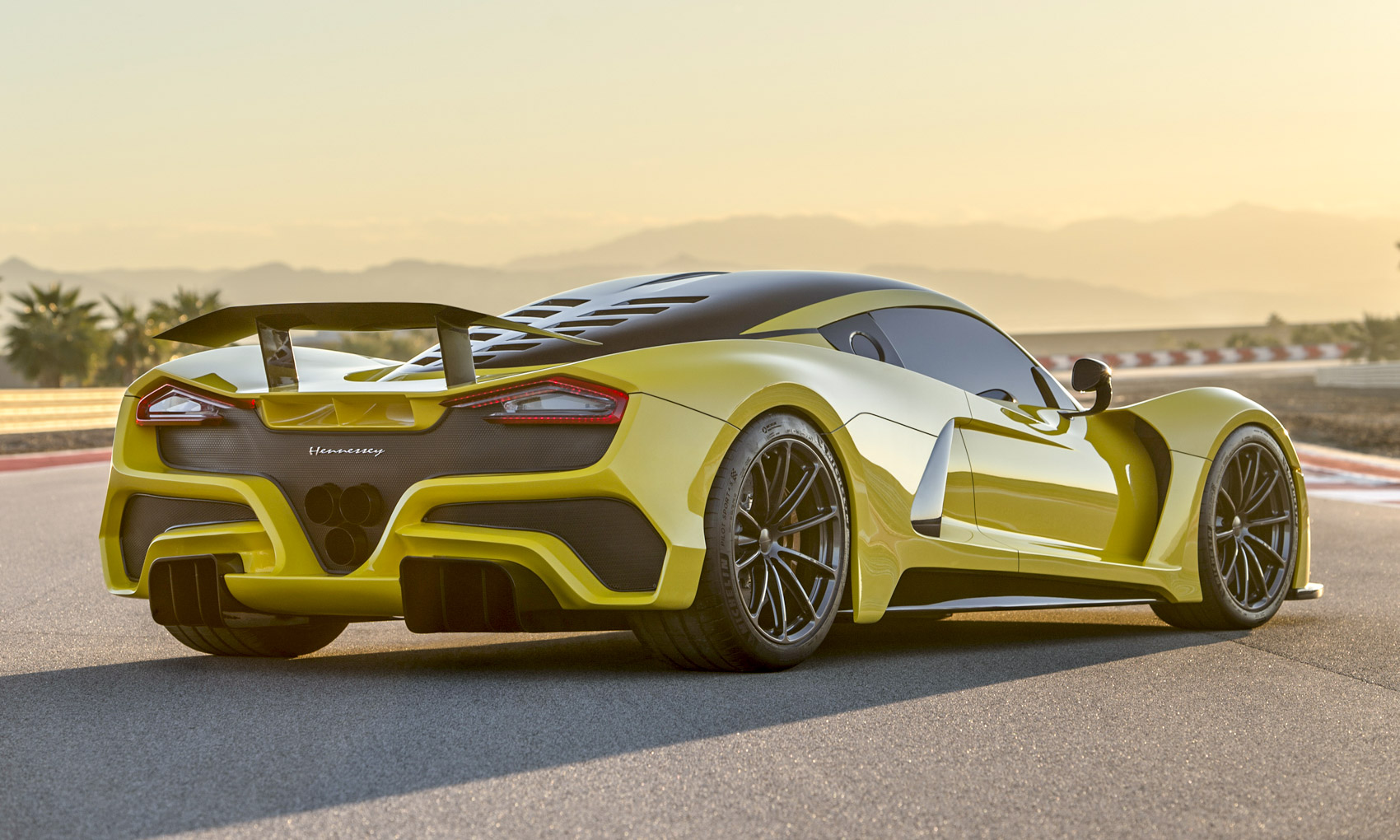 300 mph
The ultimate goal of the Venom F5 is to reach the elusive 300 mph mark in an easy-to-drive, comfortable sports car. Helping achieve that goal is the F5’s 7.6-liter twin-turbo V8 engine that produces at least 1600 horsepower and 1300 lb-ft of torque. Hennessey expects this extreme sports car to reach 186 mph (300 kph) in less than 10 seconds with a top speed in excess of 300 mph. Current plans are to be performing vehicle testing later this summer, with the first deliveries coming by the end of the year. Only 24 will be built at a planned price of $1.6 million. 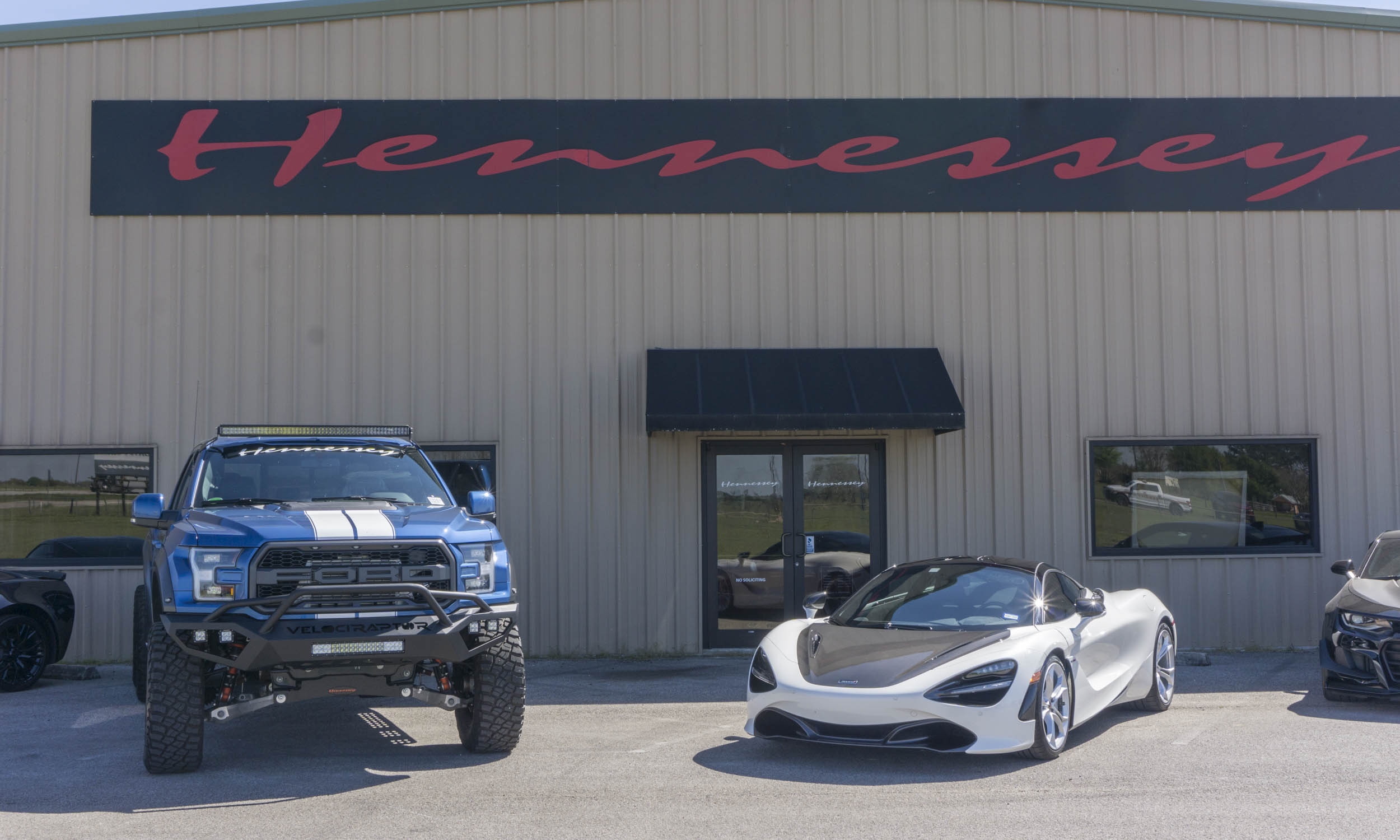 Something for Every Enthusiast
With modification packages available that range from basic upgrades for the entry-level Camaro to extremes such as the HPE1200 Jeep Trackhawk (with 1200 horsepower), Hennessey Performance Engineering provides custom offerings for a wide range of vehicles that are too extensive to list here. And later this year, the company will even offer its own hypercar in the Venom F5. For auto enthusiasts lucky enough to have a fast car that they want made faster, check out HPE’s site at http://hennesseyperformance.com/.