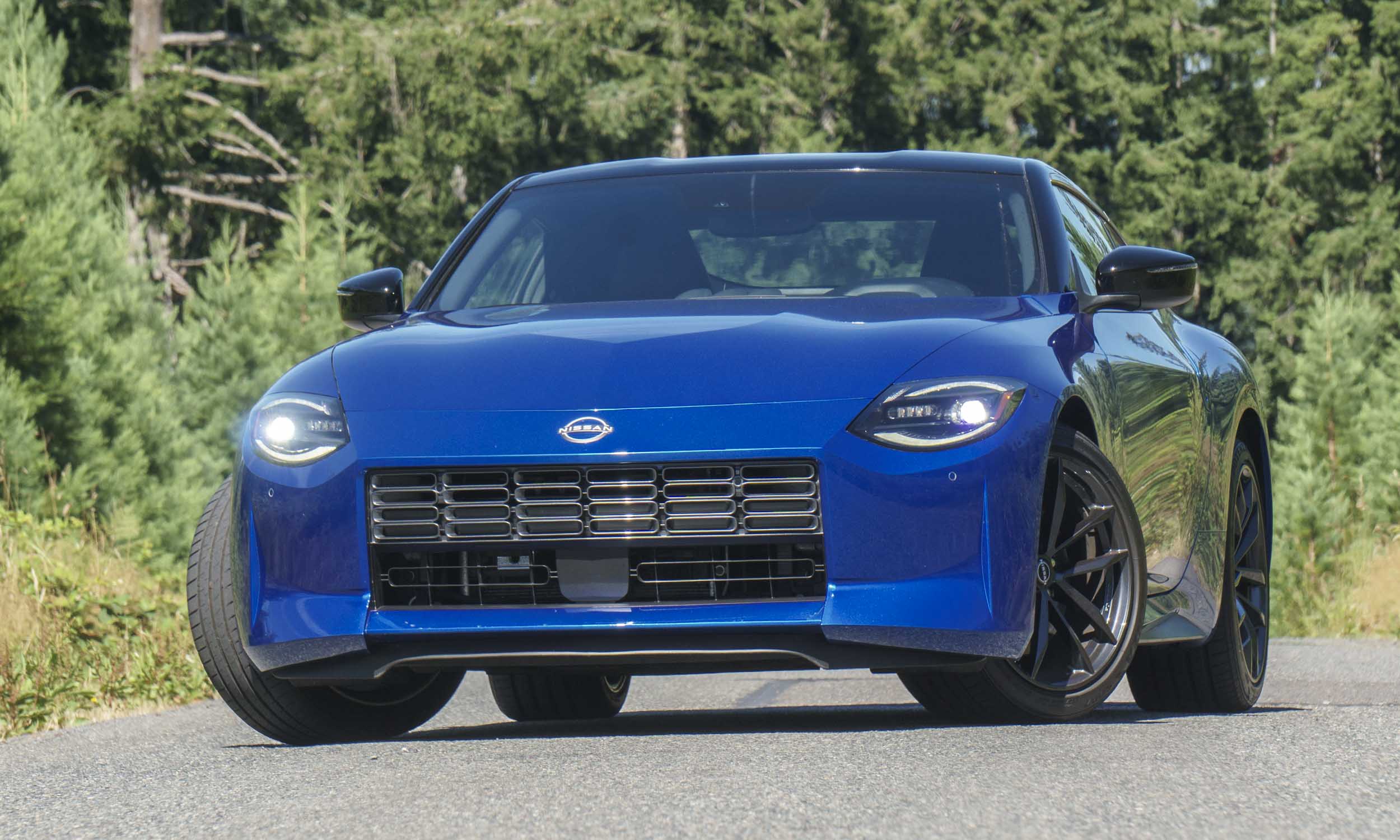 What Is It?
More than 50 years ago when Nissan introduced the 240Z, it redefined the sports car for American shoppers. Over its lifespan the Z has adopted many forms, and the 2023 Nissan Z introduces the seventh generation of this iconic sports car. With more power, better performance and classic sports car proportions, the 2023 Nissan Z is a proper successor to the 50 years of Z cars that came before it. 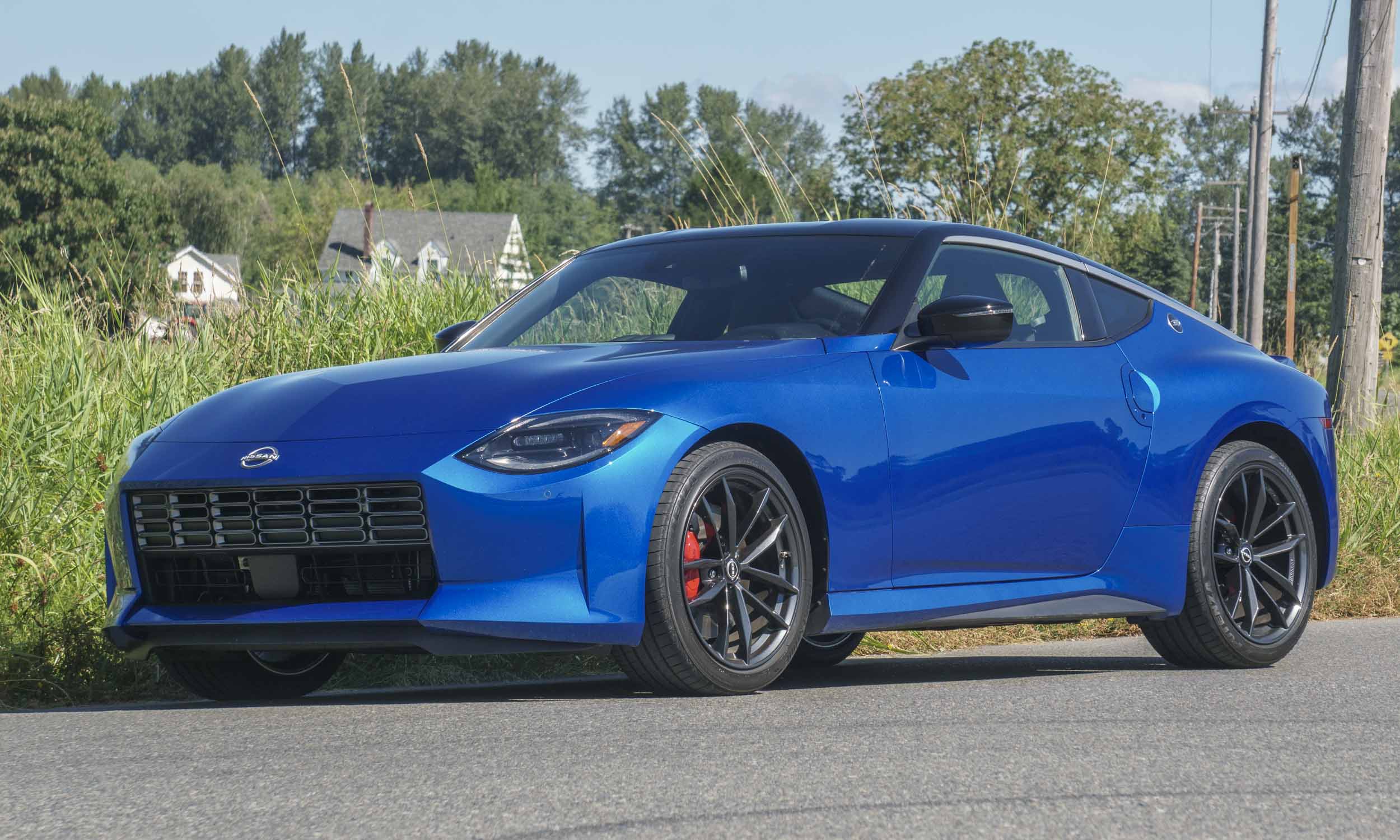 Test Vehicle
Nissan provided us with a 2023 Nissan Z Performance, swathed in an eye-catching Seiran Blue Metallic / Super Black two-tone paint scheme. The test vehicle arrived equipped with a standard-issue 6-speed manual gearbox, and the only extras were illuminated kick plates, two-tone paint and floor mats for a total MSRP of $53,210. Competitors to the 2023 Nissan Z include the Ford Mustang GT, Chevrolet Camaro SS, Toyota GT Supra and the Honda Civic Type R. 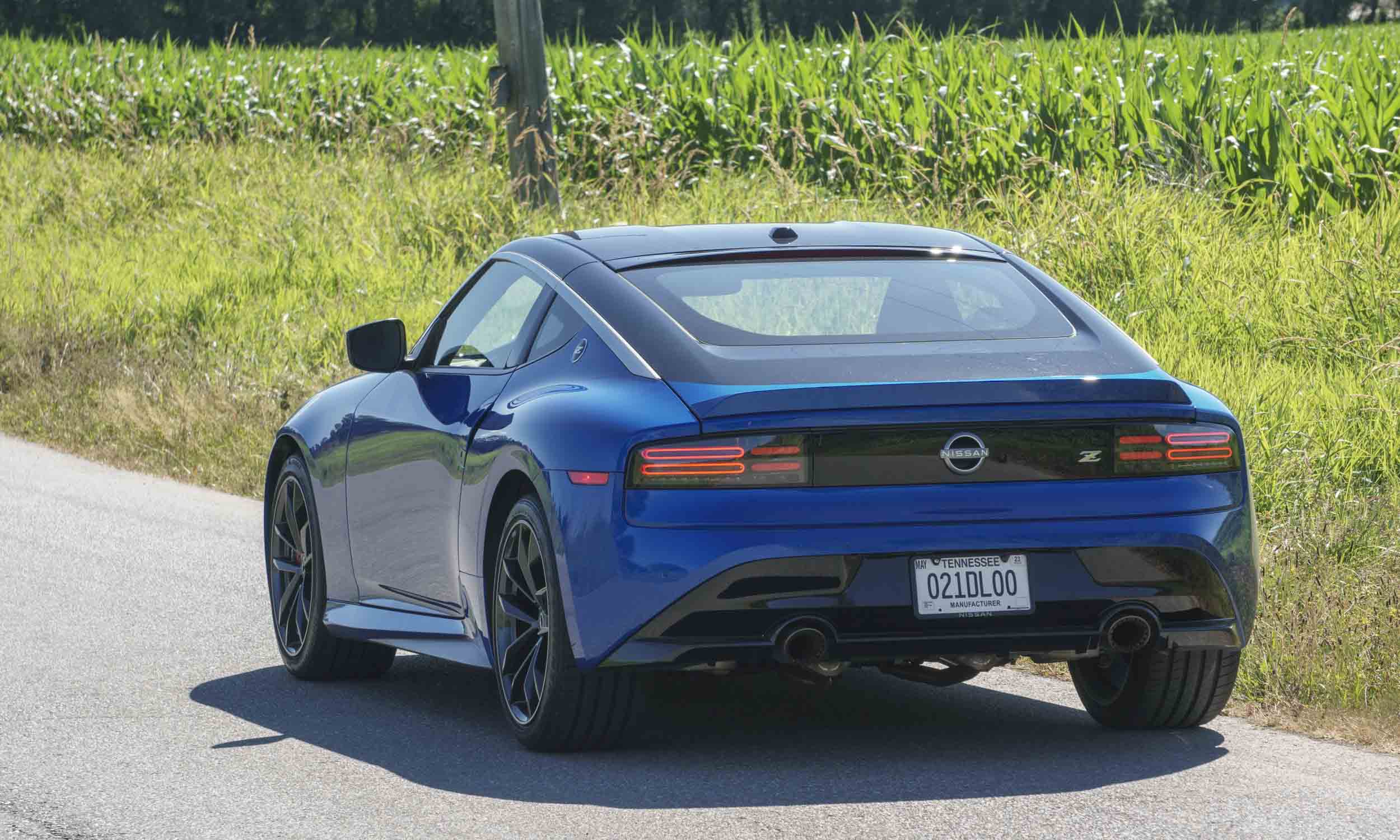 Z Car Styling
The 2023 Z has all-new styling, yet it still looks familiar. “Inspired by the voices of thousands of Z owners and Z lovers and ignited . . . the six generations of Z that have come before, we found ourselves gravitating towards the sketches that touched the high points . . . while remaining true to our vision of the future,” said Alfonso Albaisa, global head of design at Nissan. “Ultimately, we created a Z that travels between the decades while being completely modern,” Albaisa enthused. 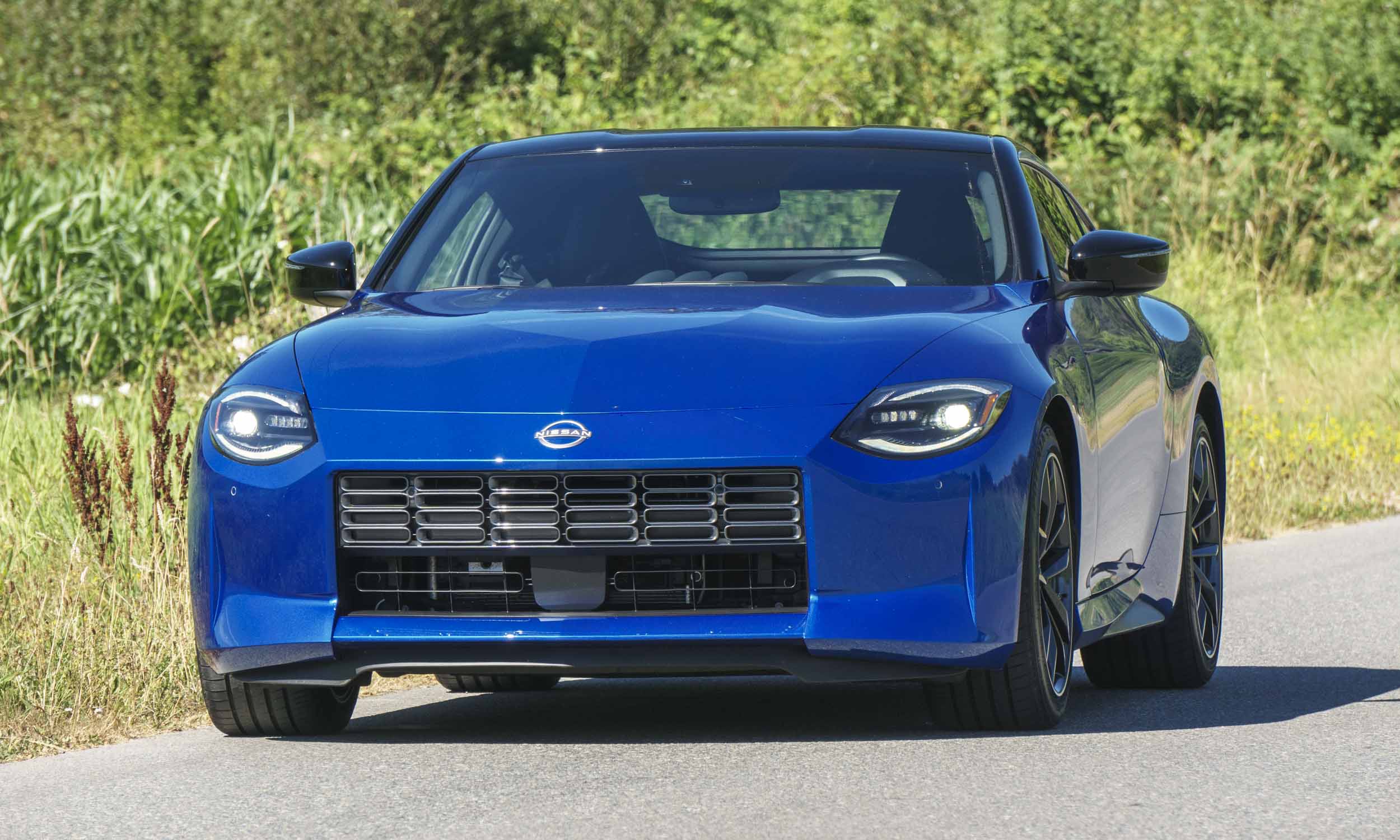 Classic View
Up front the 2023 Nissan Z has a squared grille flanked by stylish LED headlights with unique half-circles within, inspired by the Japan-market 240ZG of the 1970s. A favorite styling elements is the sculpted hood that features an integrated power dome that intersects midway and connects to a point directly above the Nissan logo. Ultimately, this car simply looks great from every angle. 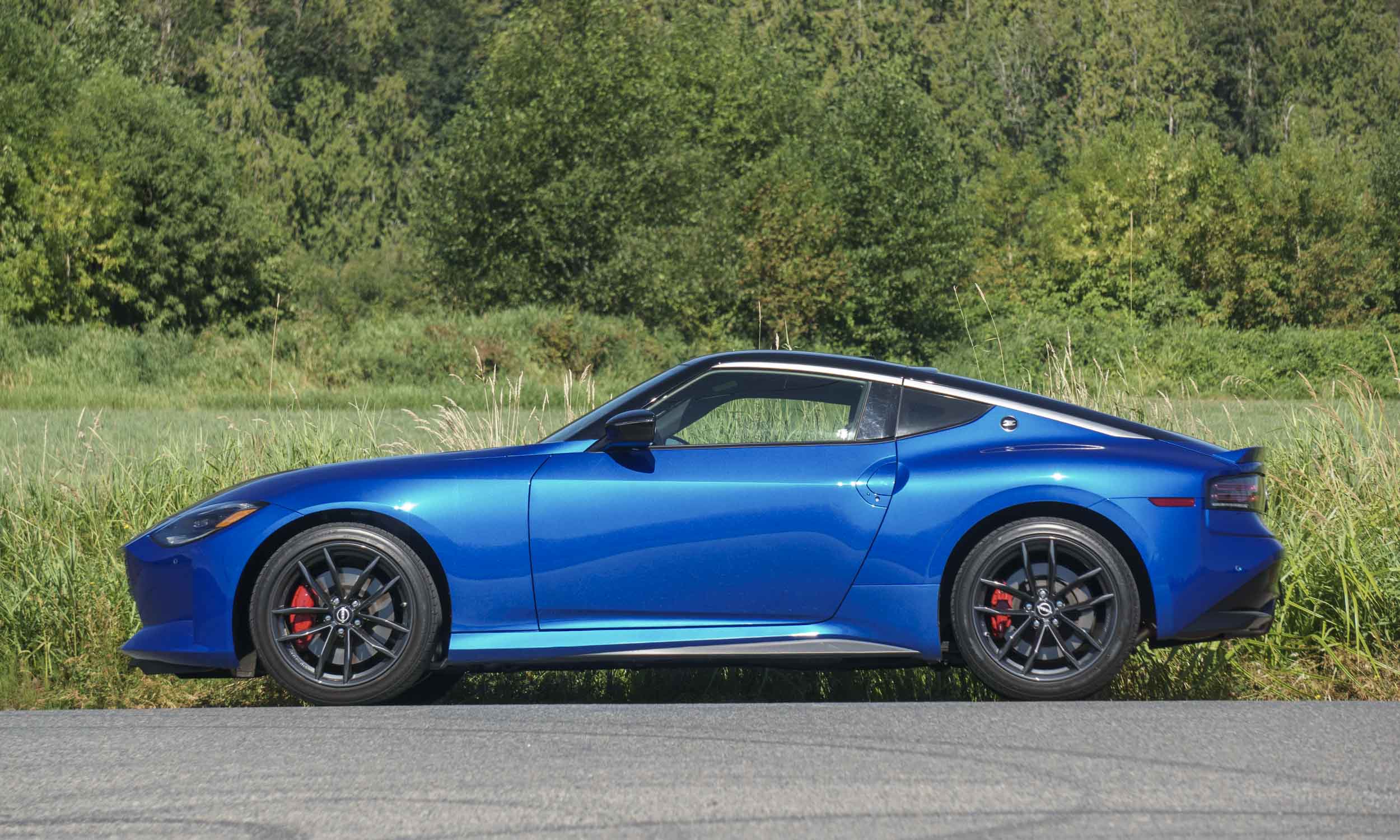 Near-Perfect Proportions
One look at the new Z and it’s clear designers spent time poring over previous generations — especially the original 240Z. The long hood and roofline that flows smoothly from the top of the windshield to the rear spoiler is much like the silhouette of the first-generation — as well as the most recent version. More importantly, these are near-perfect sports car proportions, emphasized by larger fender flares and 19-inch RAYS super lightweight forged alloy wheels. 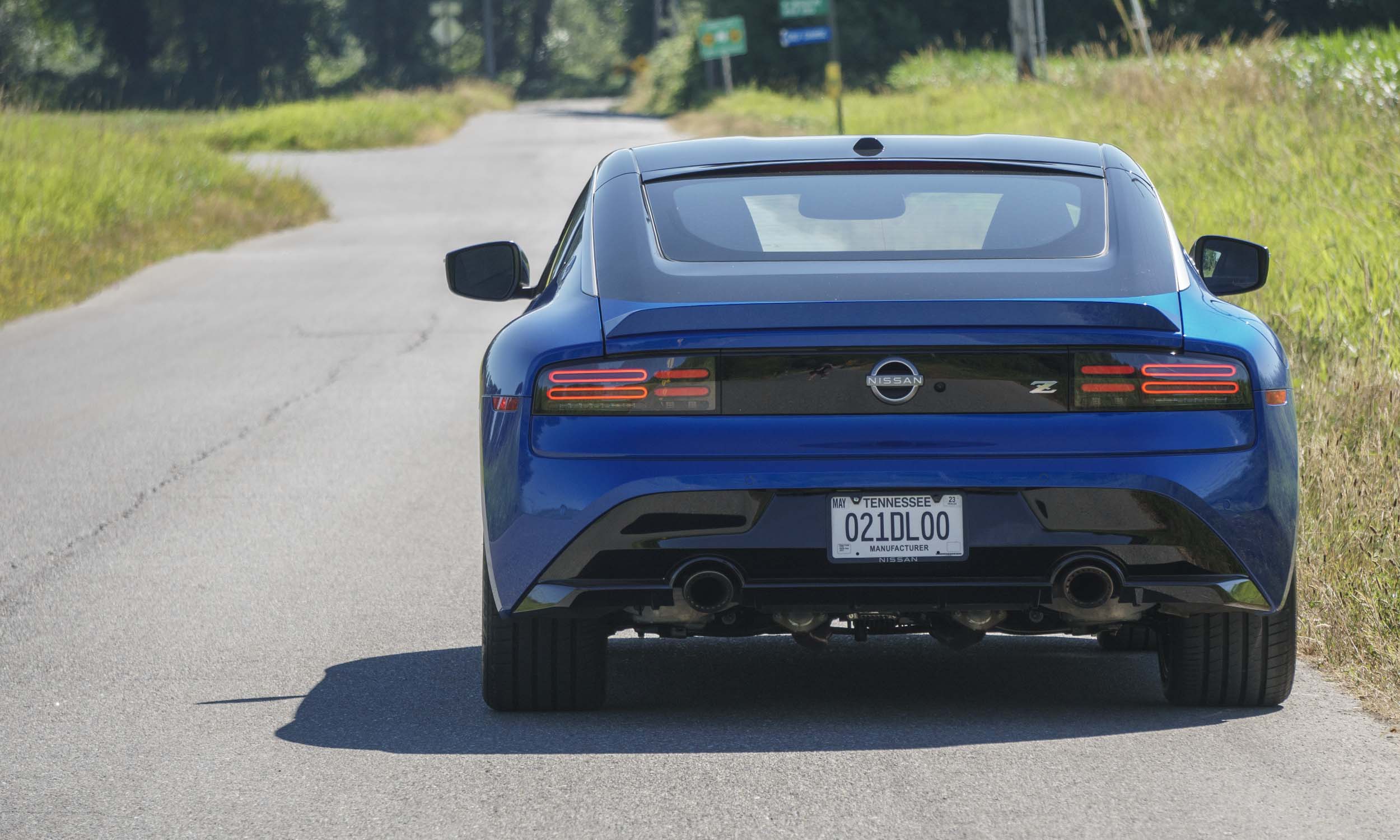 Familiar Taillights
The new Z’s rear hatch flows well into the rear spoiler, flanked by the Z’s large rear fender that emphasize this rear-drive sports car’s power. The rear combination lights are much like those found on the 300ZX from the early 1990s, only these take advantage of modern technology with a 3D presentation. A standard dual exhaust completes the look. Under the Hood
A 3.0-liter twin-turbo V6 engine powers the 2023 Nissan Z, producing 400 horsepower and 350 lb-ft of torque — the latter available at a low 1600 rpm. The new engine represents a jump of 68 horsepower over the current 370Z. Nissan hasn’t released zero-to-60-mph times, although some enthusiast publications have reported that the Z can make the sprint in about 4.5 seconds. Fuel economy isn’t bad either —even during rather aggressive driving stints the sports car still achieved close to 22 mpg. 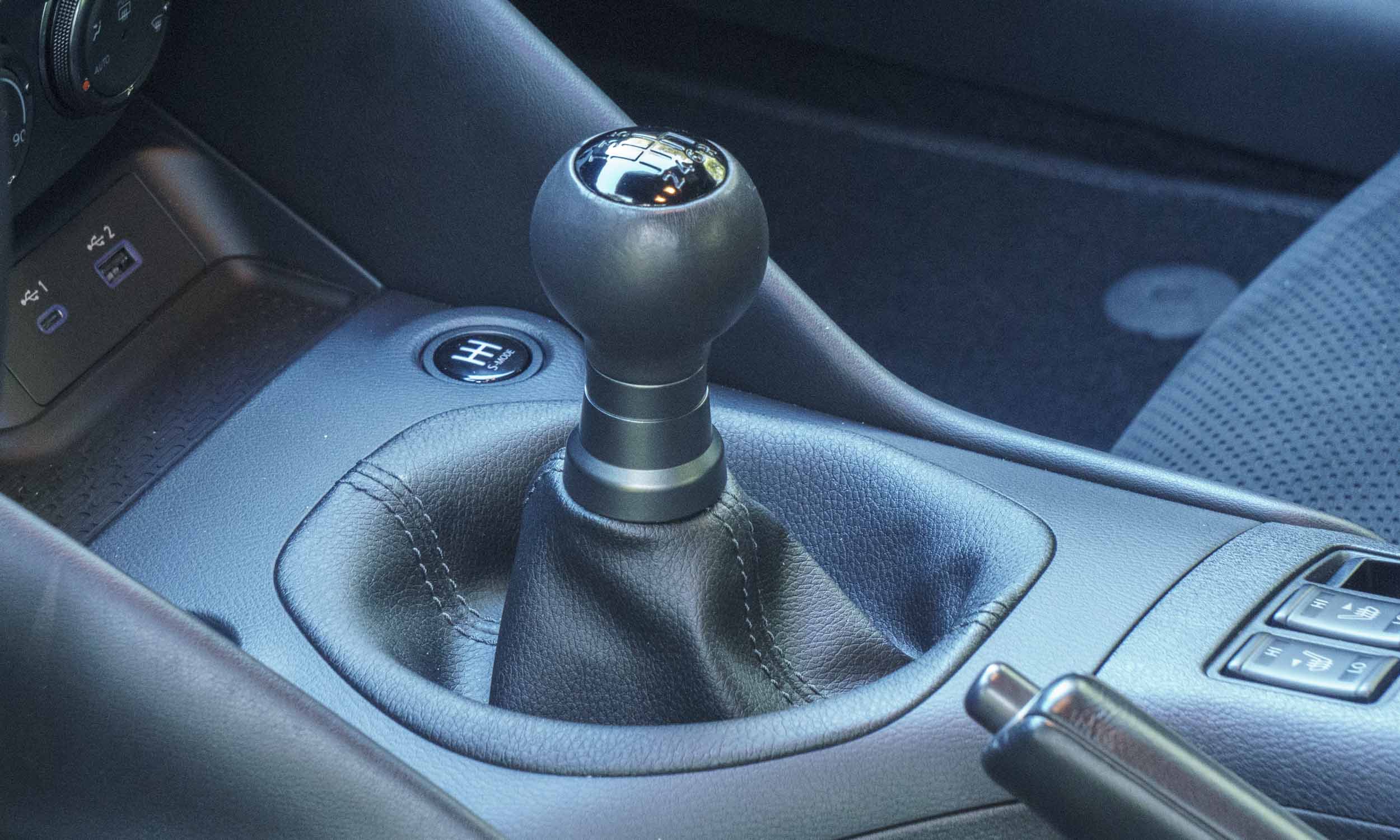 Manual Gearbox
A 6-speed manual gearbox has become a rare feature in sports cars today, but we’re happy to report that the Z features a close-ratio 6-speed manual gearbox with an EXEDY high performance clutch. Z cars equipped with the manual gearbox also get a carbon fiber composite driveshaft and available SynchroRev Match. The tester had this feature, which automatically blips the throttle when downshifting for amazingly quick shifts every time, making any driver feel like a professional. 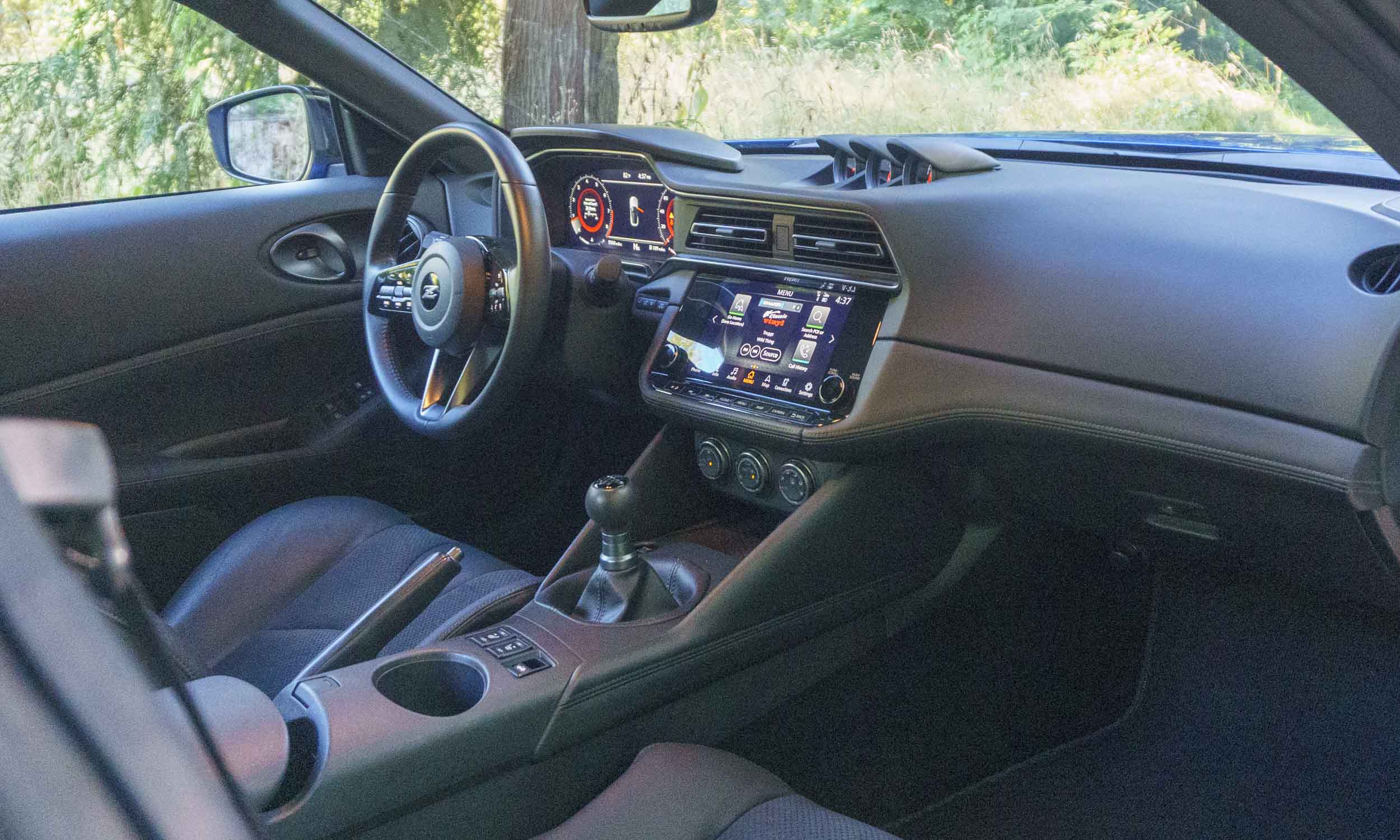 Inner Space
The new Z has an appreciable blend of high-tech features with components appropriate to a sports car. In the center of the dash sits a 9-inch touchscreen display (non-Performance trims get an 8-inch display) with a dedicated menu at the base for easy navigation. Android Auto and Apple CarPlay integration are included, and we’re happy that Nissan kept the volume and tuning knobs. 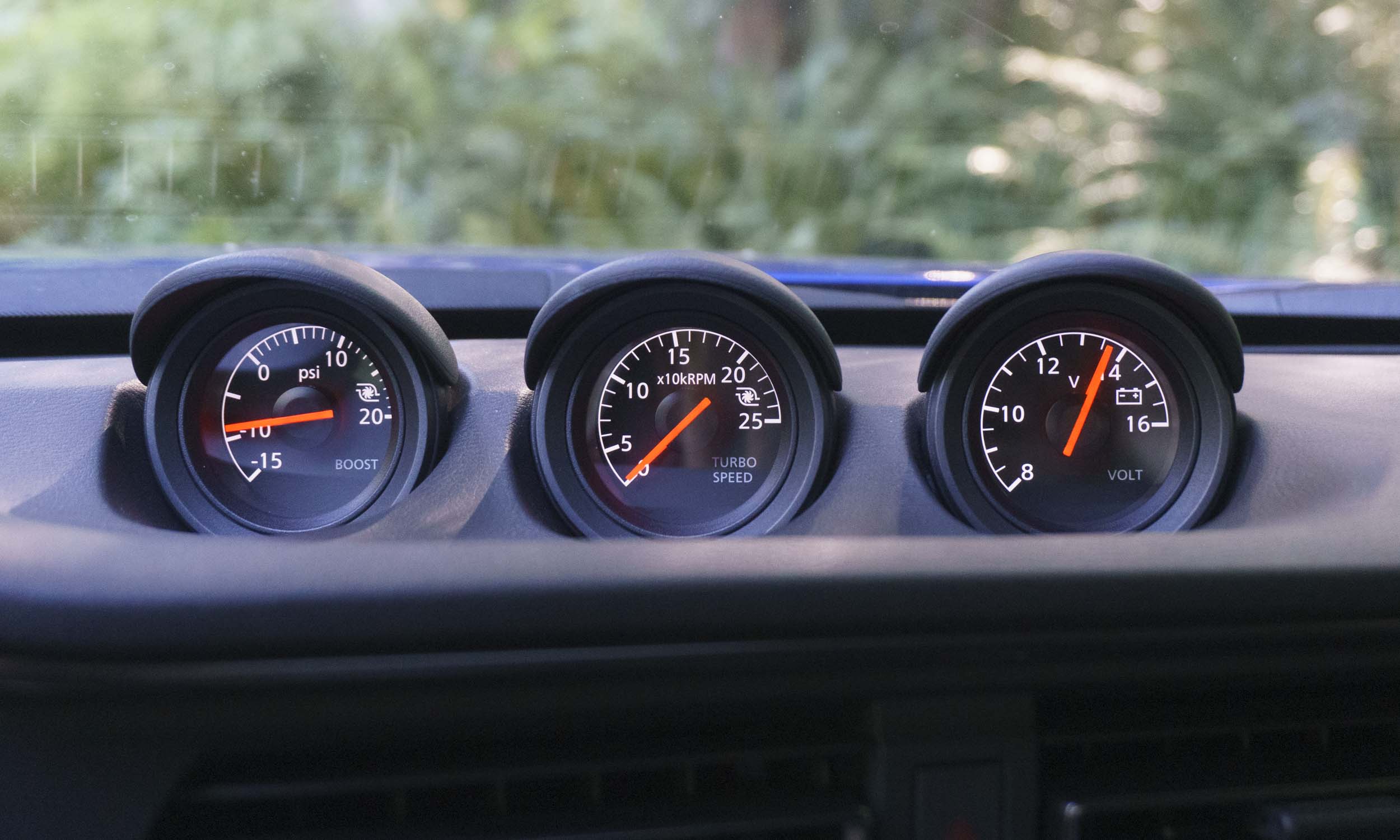 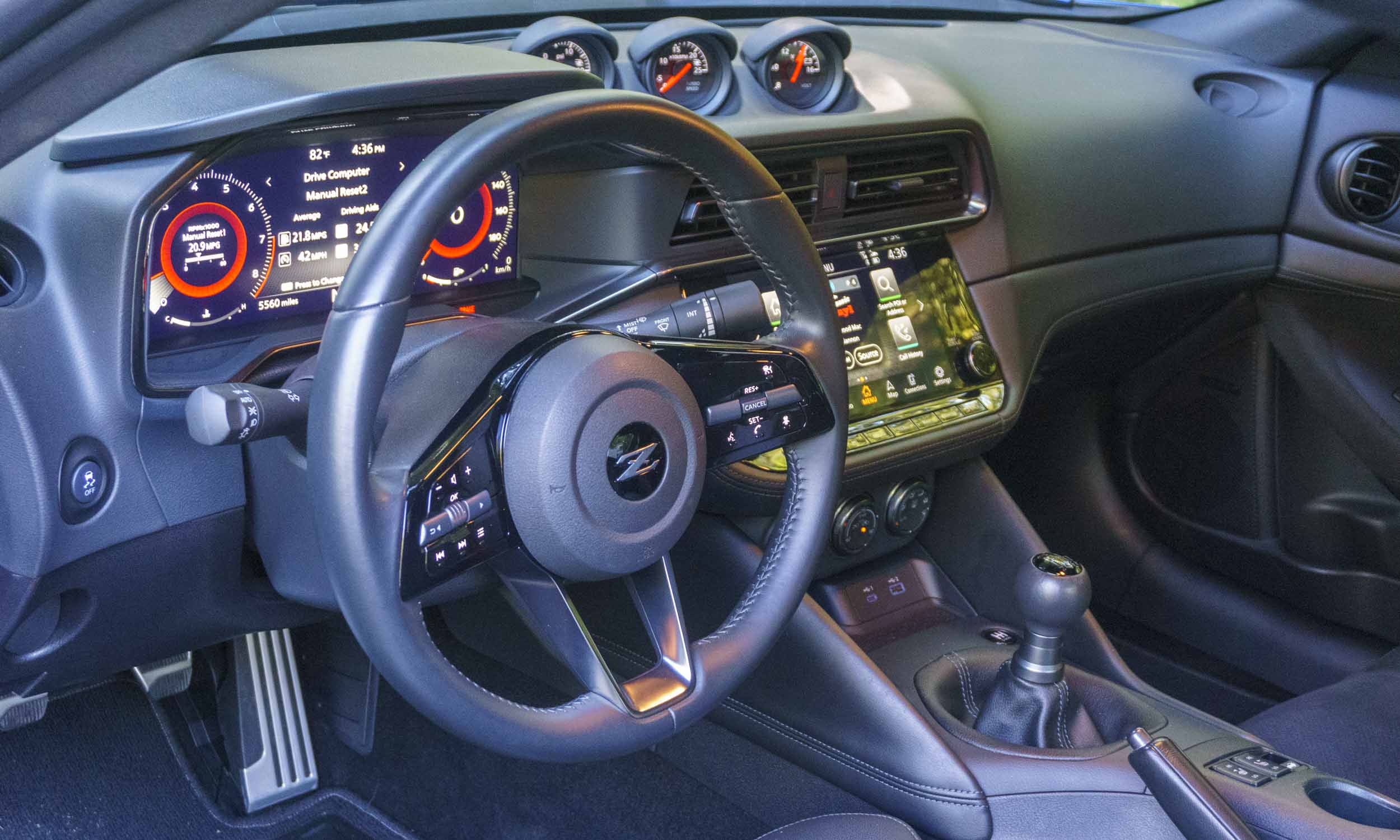 Driver Display
The steering wheel on the 2023 Nissan Z is thick an offers good grip — appropriate for this car’s audience. Behind the new wheel is a 12.3-inch configurable display designed to provide all pertinent information via three modes. Enhanced mode puts a large navigation map between the gauges, while Sport moves the tachometer to the center and can feature a boost gauge or G meter. 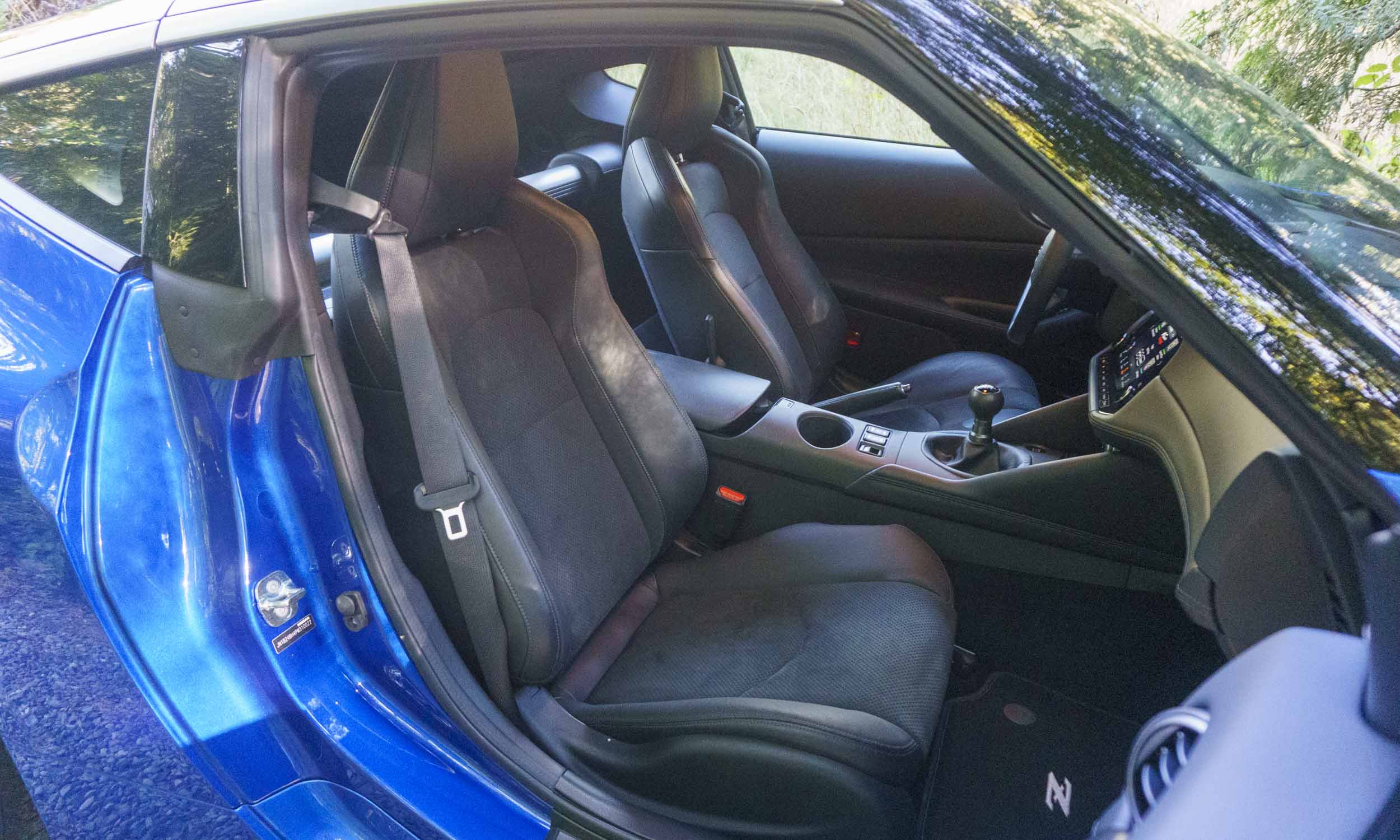 Sport Seats
The Z Performance comes equipped with sport seats trimmed in leather and suede. Not only do they look good, the seats are comfortable while offering commendable support during enthusiastic driving. 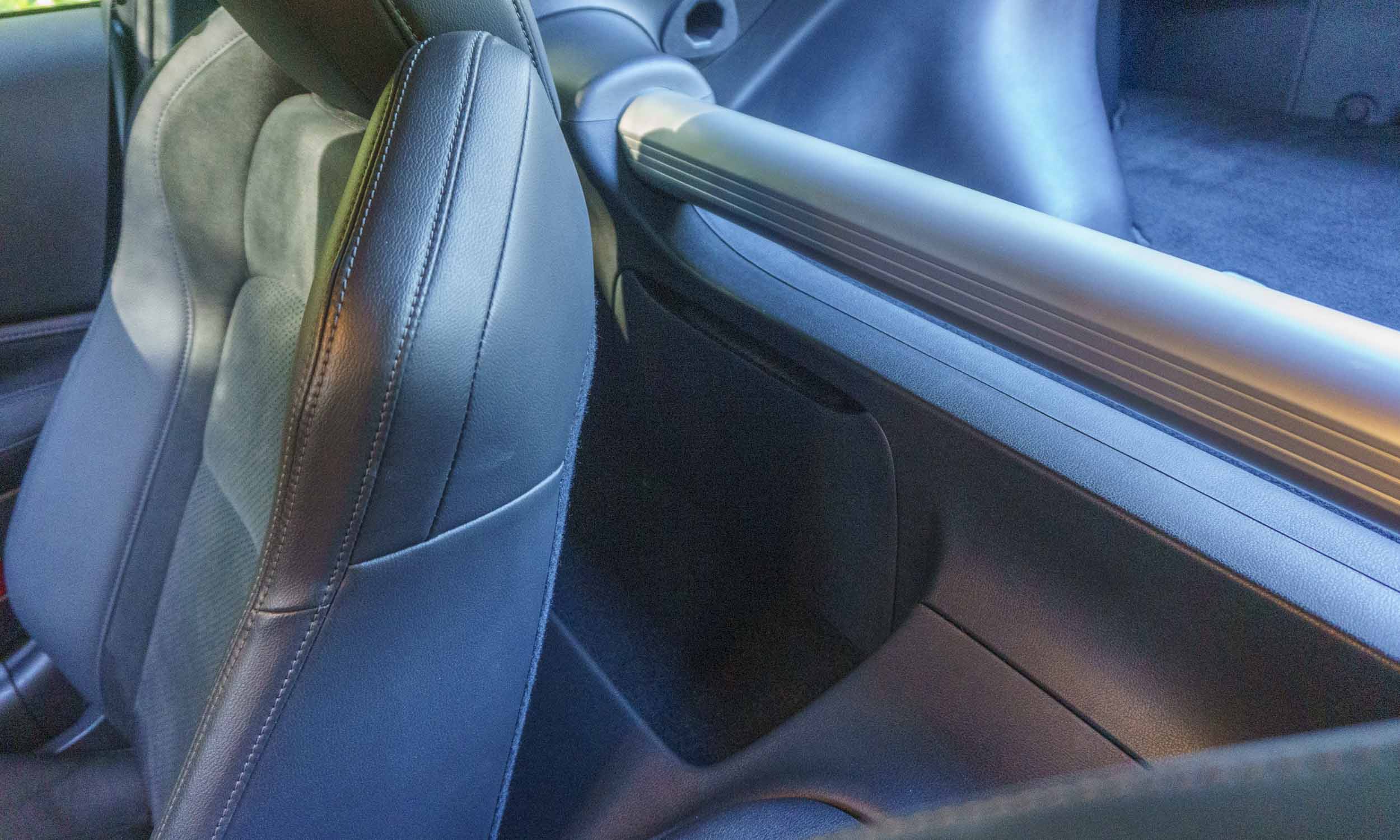 Extra Storage
Since the Z is a two-seat sports car, cabin storage is going to be limited. That said, Nissan has integrated two bins behind the seats that are ideal for storing a bag, purse or other small items. 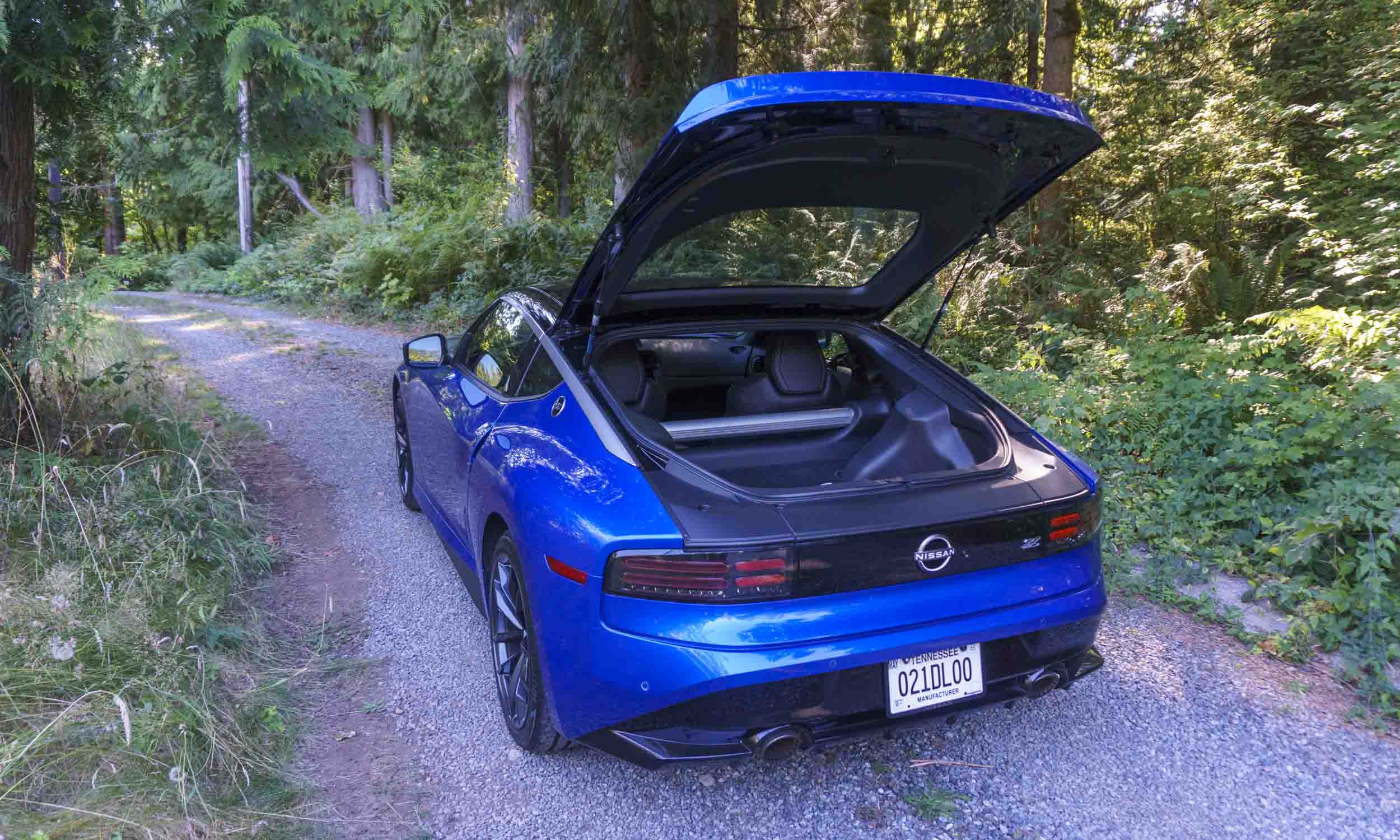 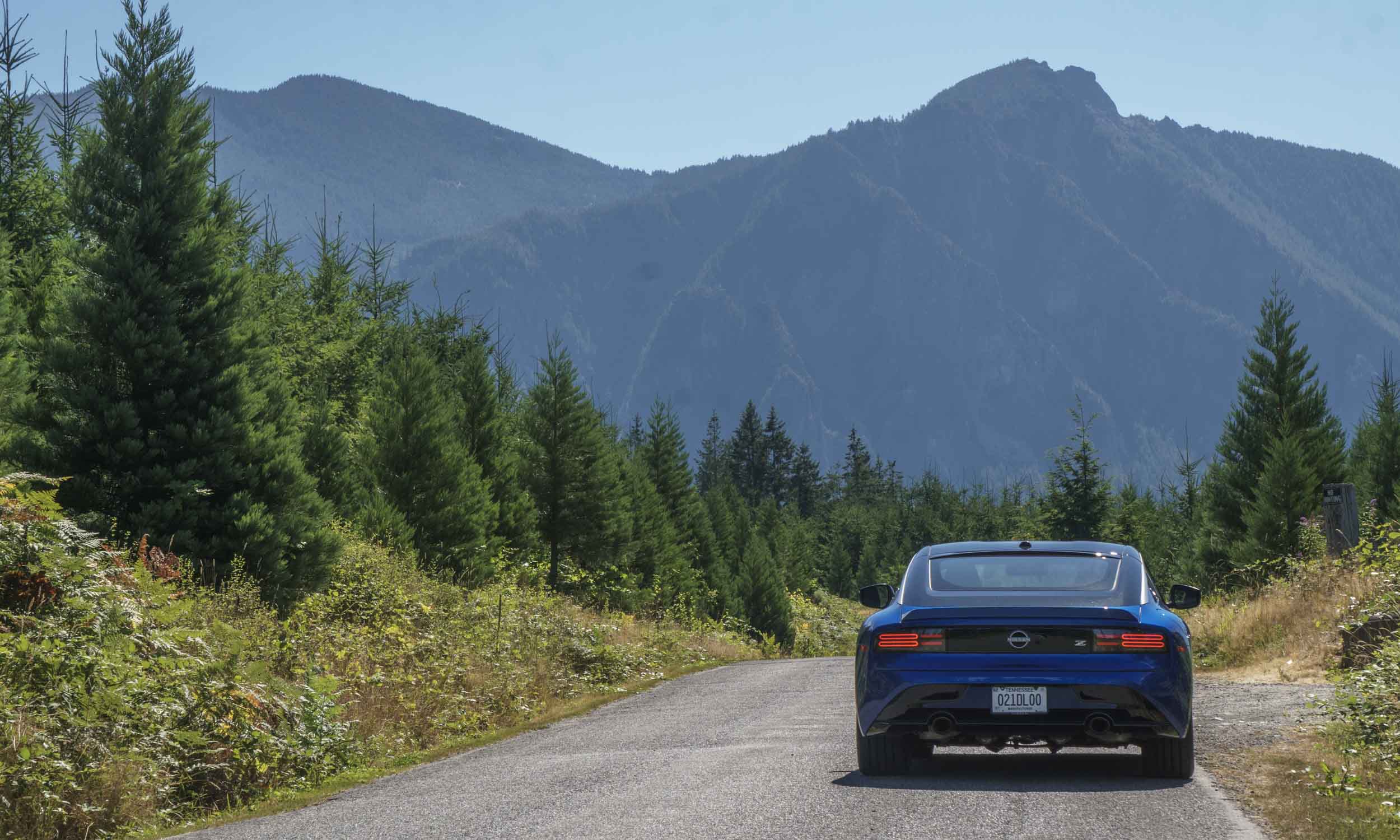 On the Road
We have to admit we had fairly high expectations for the new Z prior to testing, and we’re pleased to say that we have not been disappointed. The car has plenty of power on tap, providing strong acceleration from a stop or when already at speed. The shifter is properly placed for quick shifts. We enjoyed the SynchroRev Match for making smooth downshifts while creating a lovely exhaust note when it blips the throttle. 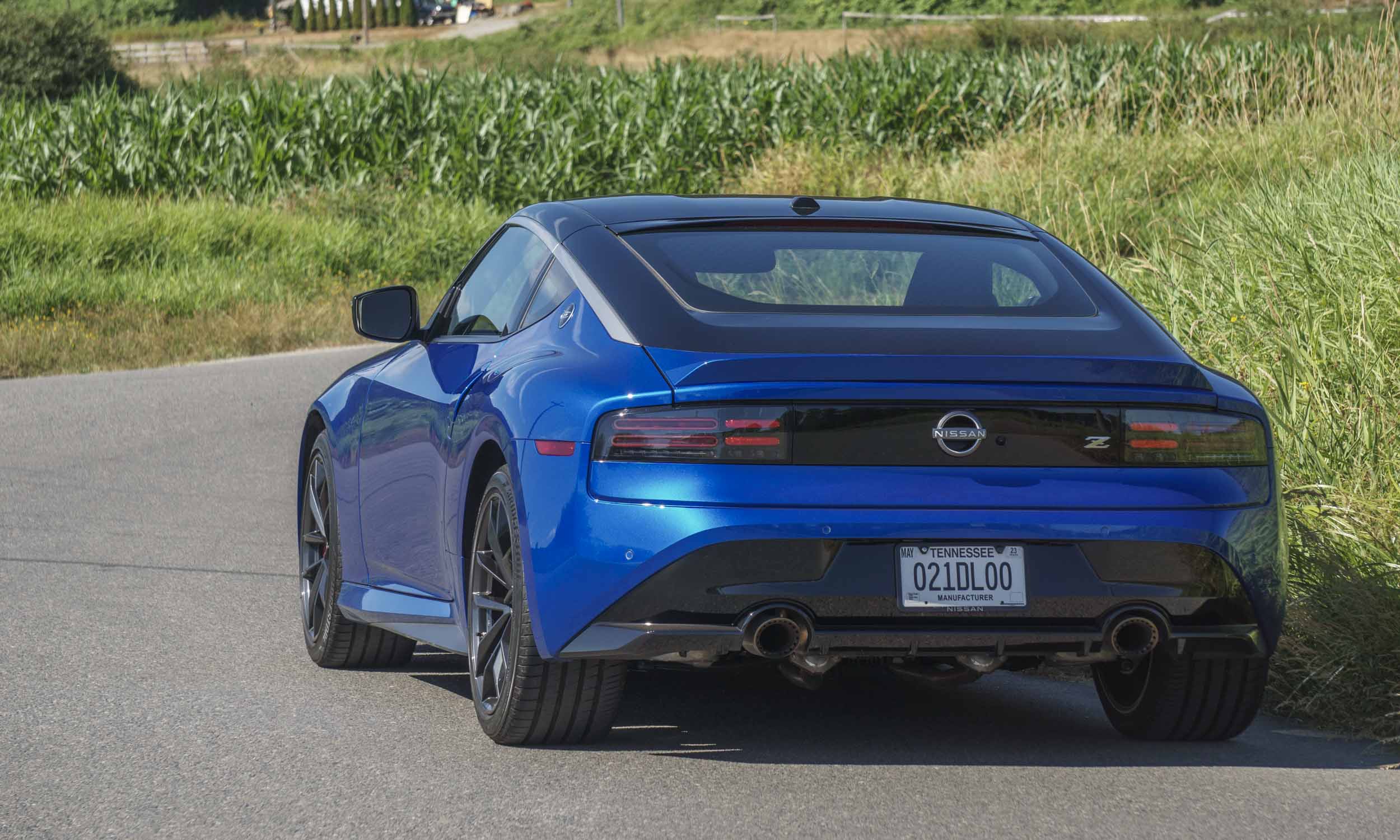 Fun to Drive
The Z car looks like a proper sports car, and it drives like one too. Not only is it quick off the line, it is great fun to drive when the road gets twisty. Steering is precise with decent feedback, and the car feels planted and confident when driven hard into corners and while accelerating out the other side. The stability control system is also well balanced; it isn’t intrusive but will still keep the car in line if a driver goes beyond the car’s limits. 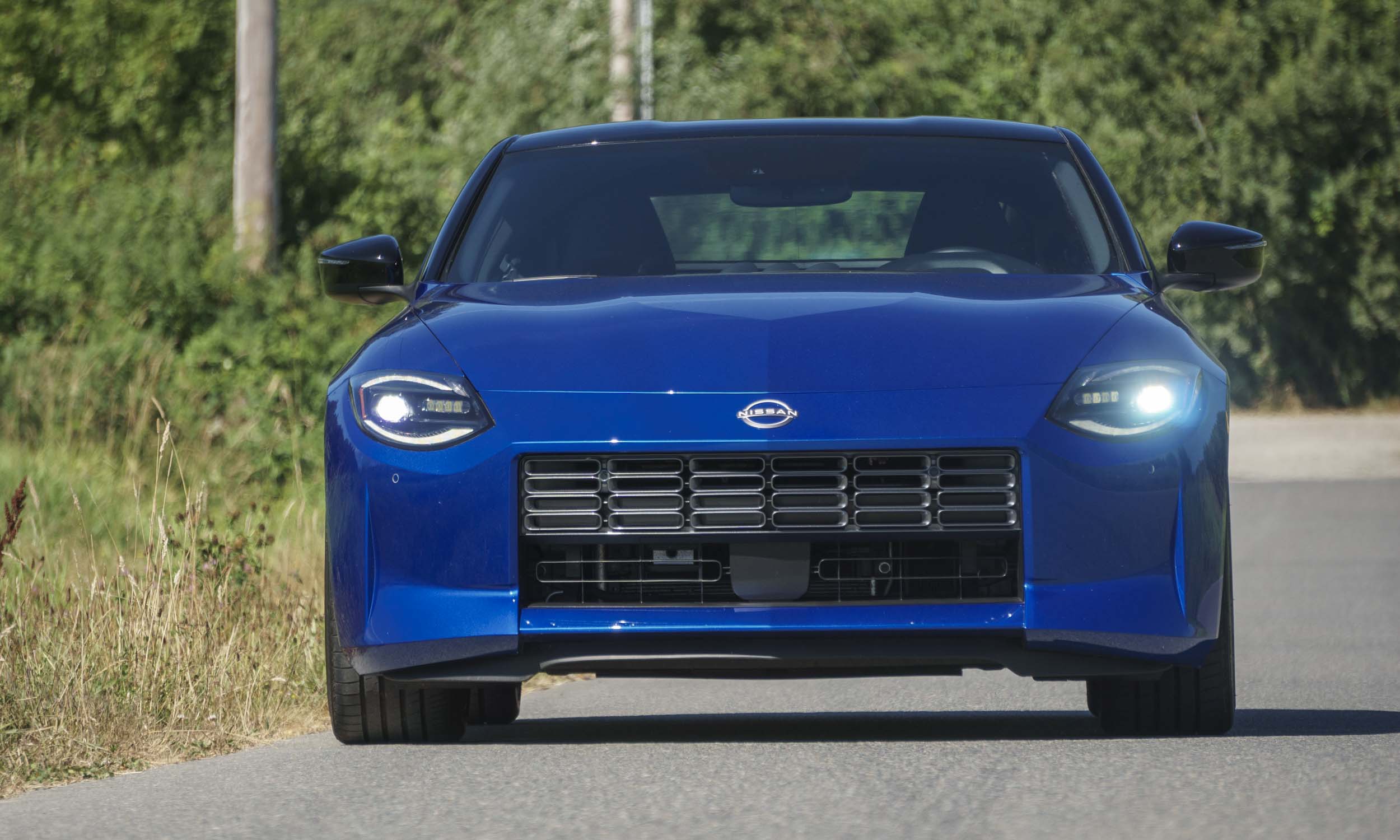 Daily Driver?
Sports cars are not typically great daily drivers, although the new 2023 Nissan Z could easily fit that role. When driven along the freeway at the speed limit (or a bit higher), the Z car’s ride is a bit stiff yet not uncomfortable, although rough road surfaces translate to a rather noisy cabin — perhaps a small price to pay for the privilege of driving a Z car every day. 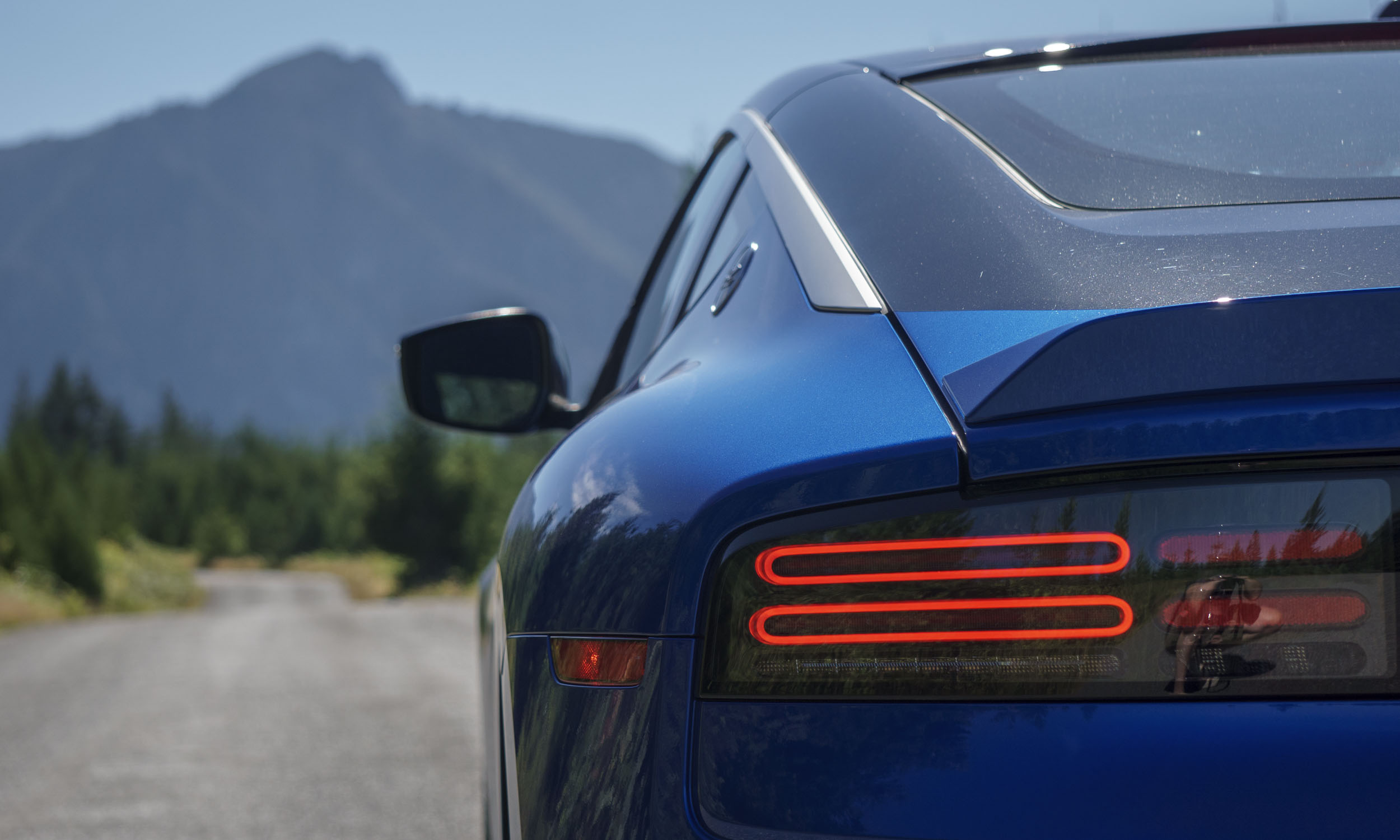 Rating: 9.0
The sports car market in America remains rather small with few players, so we’re pleased that Nissan realized the importance of remaining relevant in that halo market. With gorgeous styling, impressive performance and plenty of power, the new Z is going to make a big splash. Add in the latest convenience and safety technology as well as a comfortable, sporty cabin and the new Z car will be evoking smiles — whether while driven or simply seen by passersby. Nissan has done an excellent job building a new sports car that continues to deserve the letter Z emblazoned on its flanks.