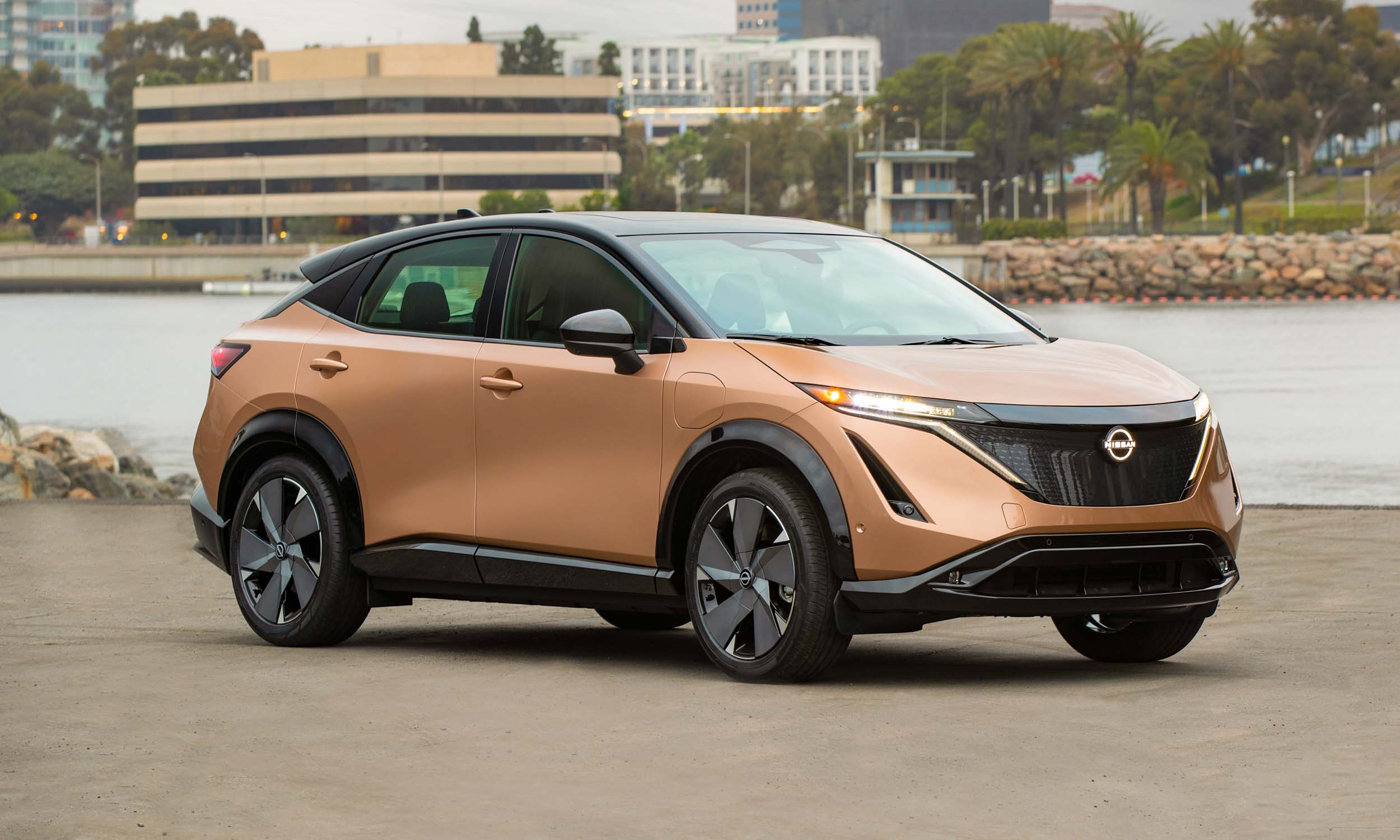 © Nissan North America
First Electric Crossover from Nissan
In 2010 when Nissan introduced the LEAF to the U.S. market, the Japan-based automaker became one of the first car companies to deliver a mainstream production electric car to the masses. Now Nissan reveals its second electric model — the Ariya. A compact crossover EV with seating for five, the 2023 Nissan Ariya will achieve a range of up to 300 miles and be available with high-performance dual-motor all-wheel drive. Not only has Nissan announced the North American specs of this new electric car, the company has also begun accepting reservations. 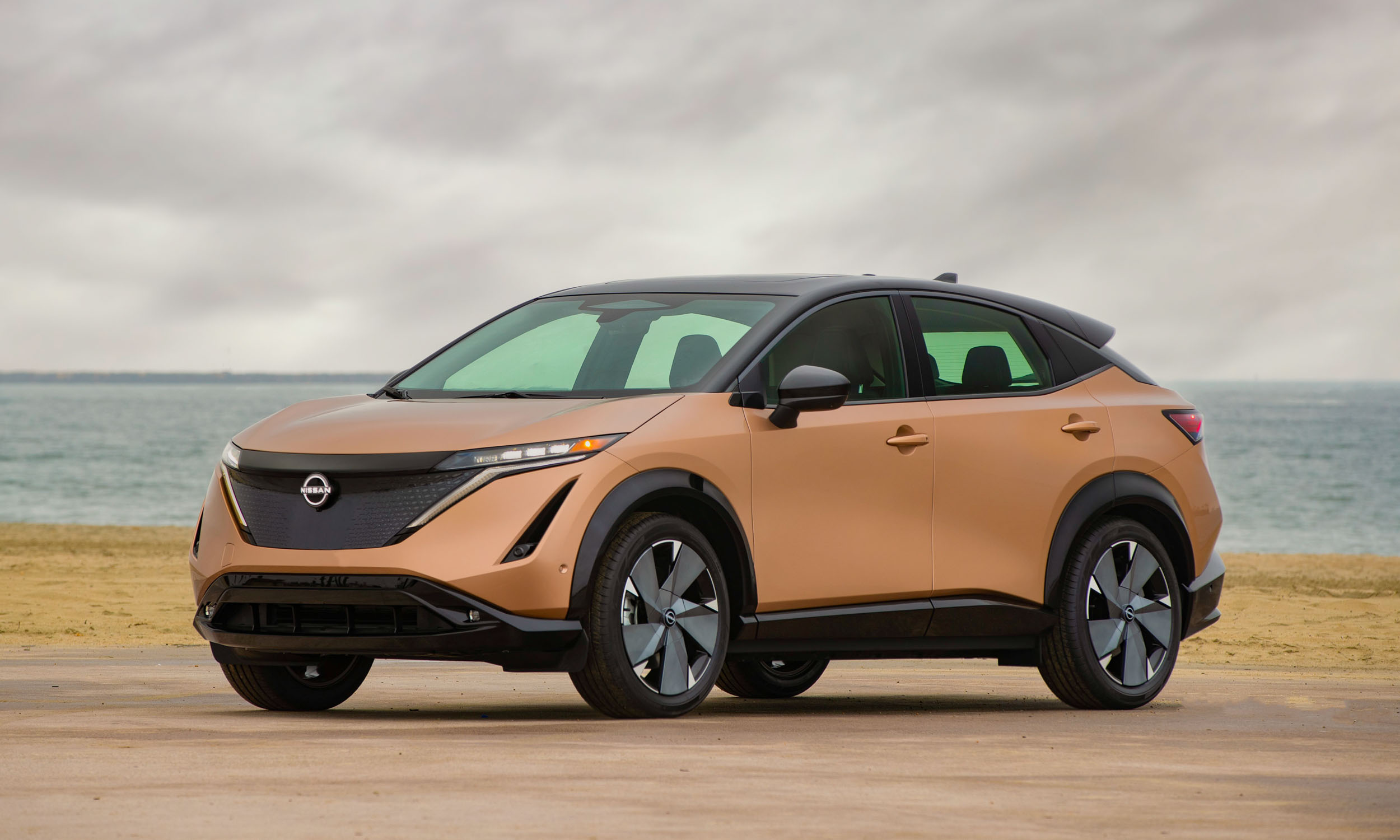 © Nissan North America
New Looks, Yet Familiar
Obvious elements of Nissan design are visible in the new Ariya; however, this new vehicle takes things a giant step further, both for the brand and for what is likely a unique look for future Nissan electric vehicles. Nissan’s signature V-Motion grille remains a fixture up front; however, Ariya possesses a broader overall stance, incorporating narrow LED headlights and running lights. 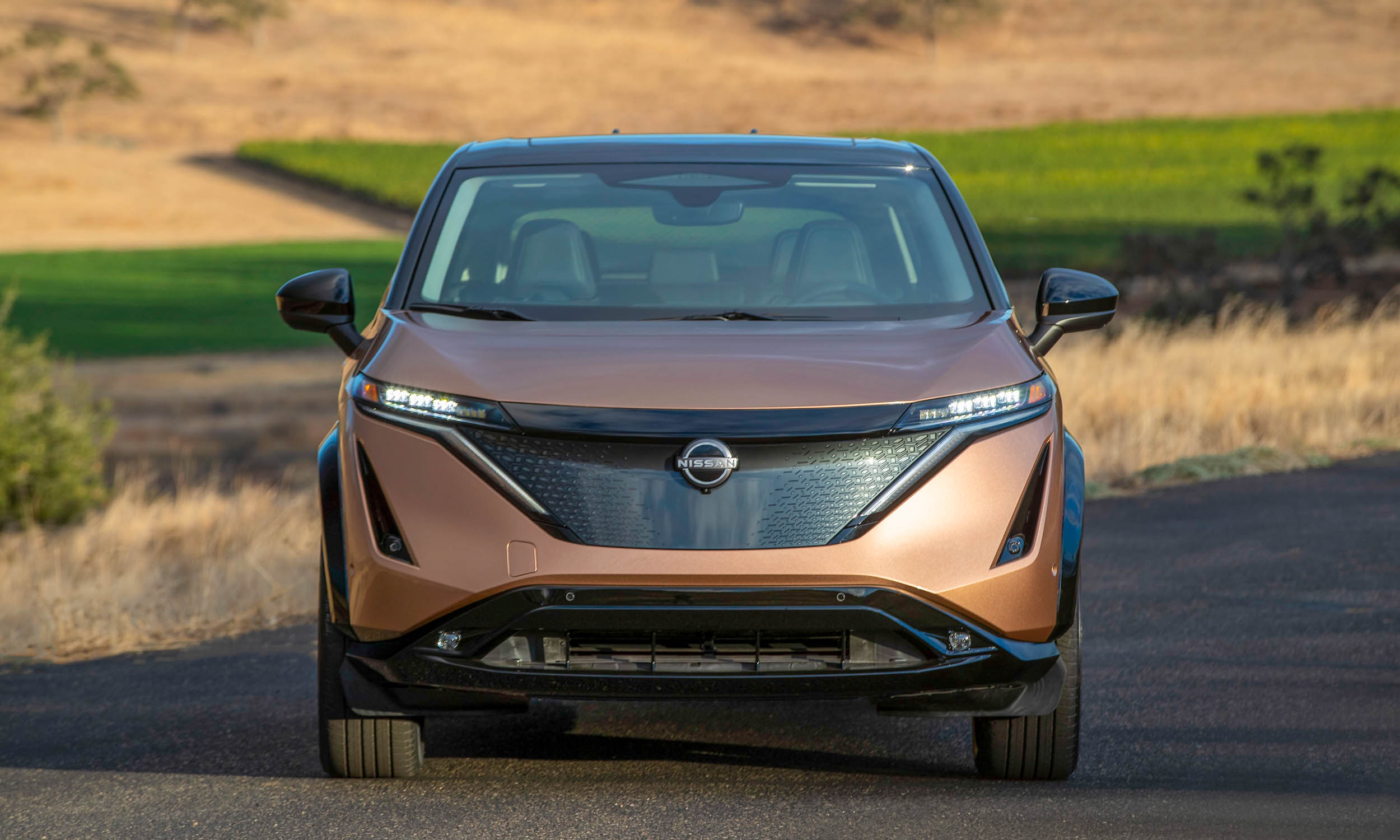 © Nissan North America
Nissan Shield
Since an EV has no need for a traditional grille providing airflow to cool an internal combustion engine, designers of the Ariya incorporated what Nissan refers to as a shield, which features 3D styling with a traditional Japanese kumiko woodworking pattern. The shield also hides sensing equipment used for Ariya’s driver-assistance features. A large Nissan logo sits at the center, lit by 20 LEDs. 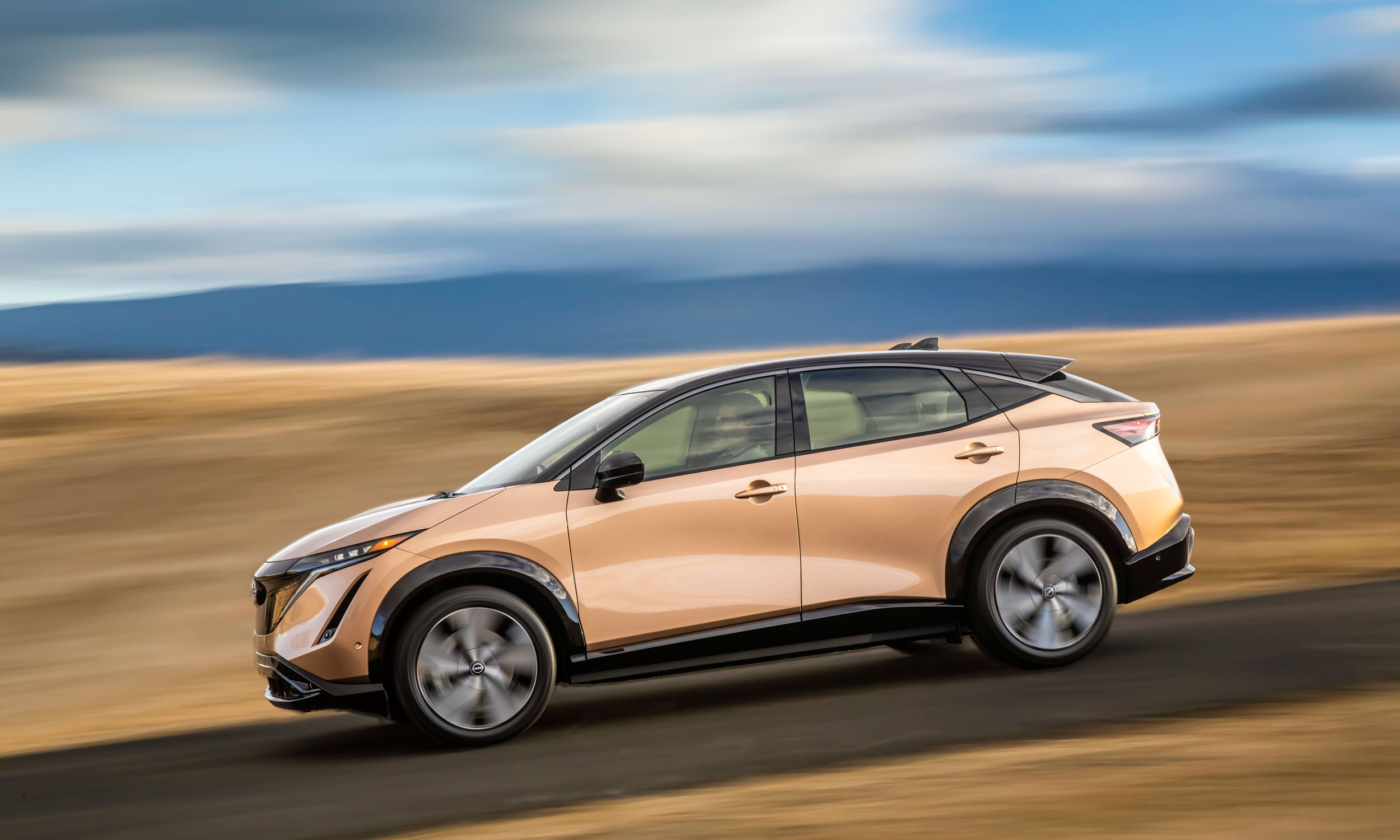 © Nissan North America
Sporty Silhouette
The Ariya’s silhouette suggests an overall sporty impression, especially when underpinned by optional 20-inch wheels, pronounced fender flares and smooth lines from the base of the windshield to a high-mounted rear wing. 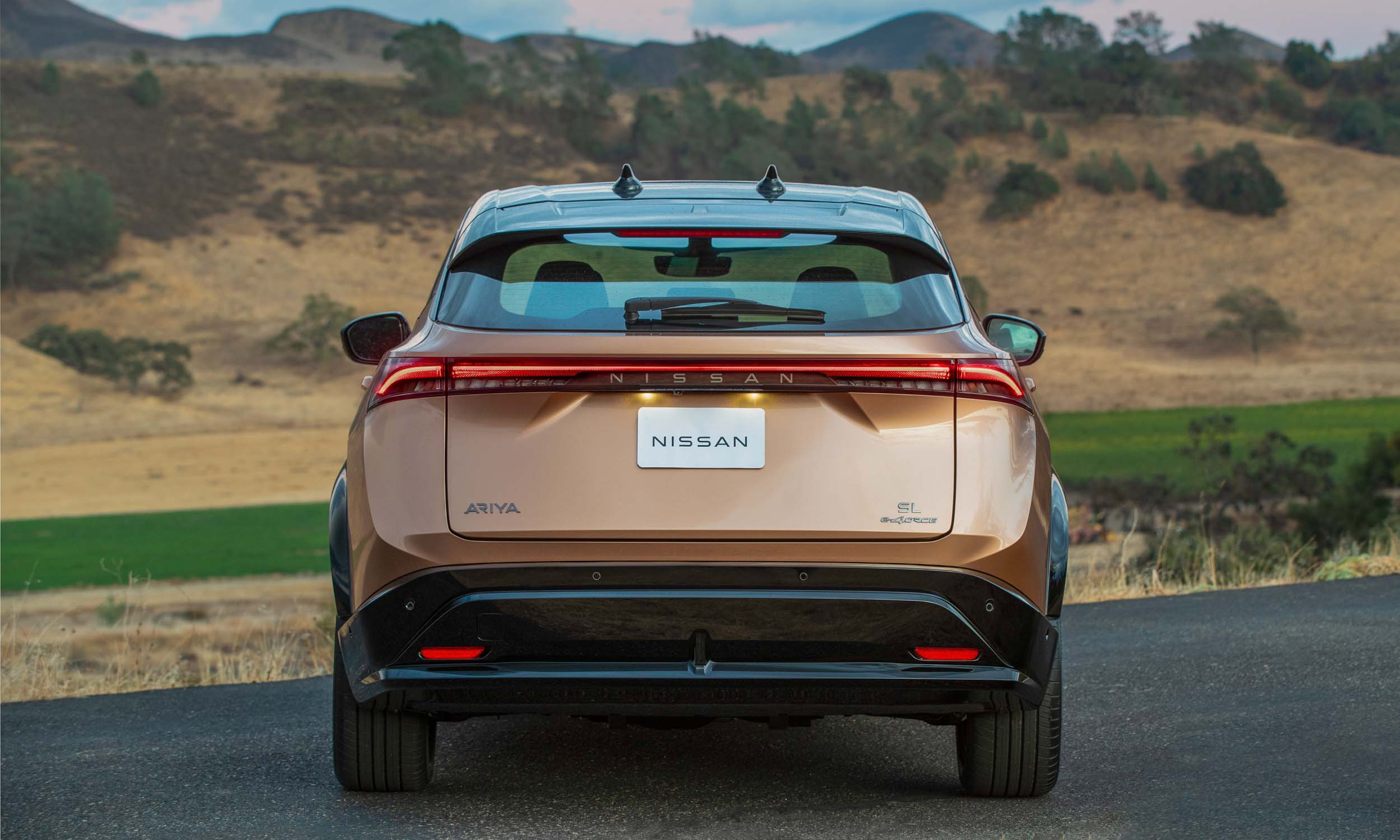 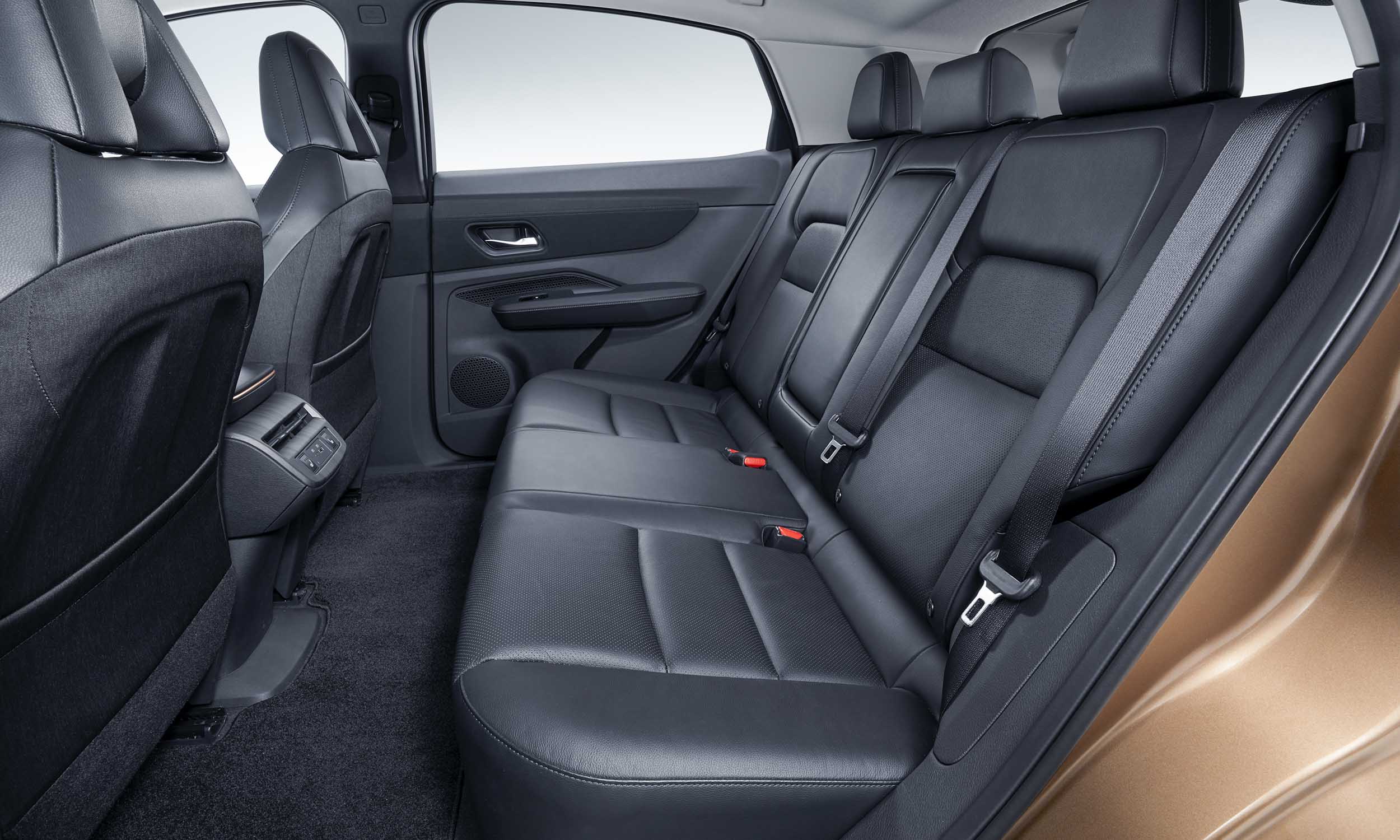 © Nissan North America
Roomy Interior
Thanks to this small electric crossover’s lack of an internal-combustion engine or accompanying bulky driveline, designers were also able to give the Ariya a roomy interior that seems incongruous with its minimal footprint. Slim-profile seats utilize Nissan’s proven Zero Gravity design; these combined with a flat floor throughout results in a significant amount of legroom for both front- and rear-seat occupants. 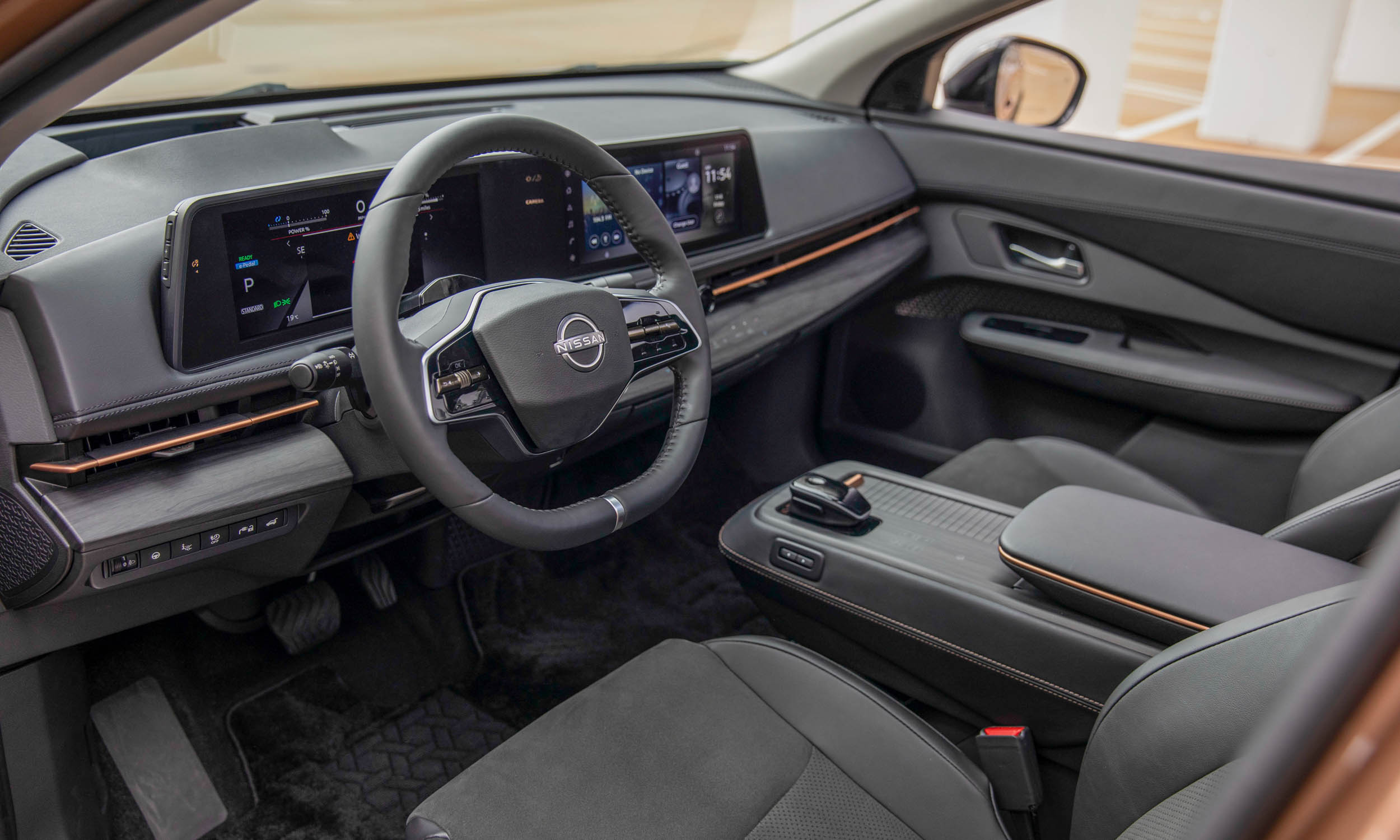 © Nissan North America
Clean Design
The clean design of Ariya’s instrument panel contributes to a spacious feeling within the cabin — with the only physical buttons being the audio power button / volume control and the start button. Climate controls use haptic switches integrated into a trim panel centered in the dashboard. Hidden when not in use, the climate controls light up when activated and use vibration to provide the same feeling as pushing a mechanical button. 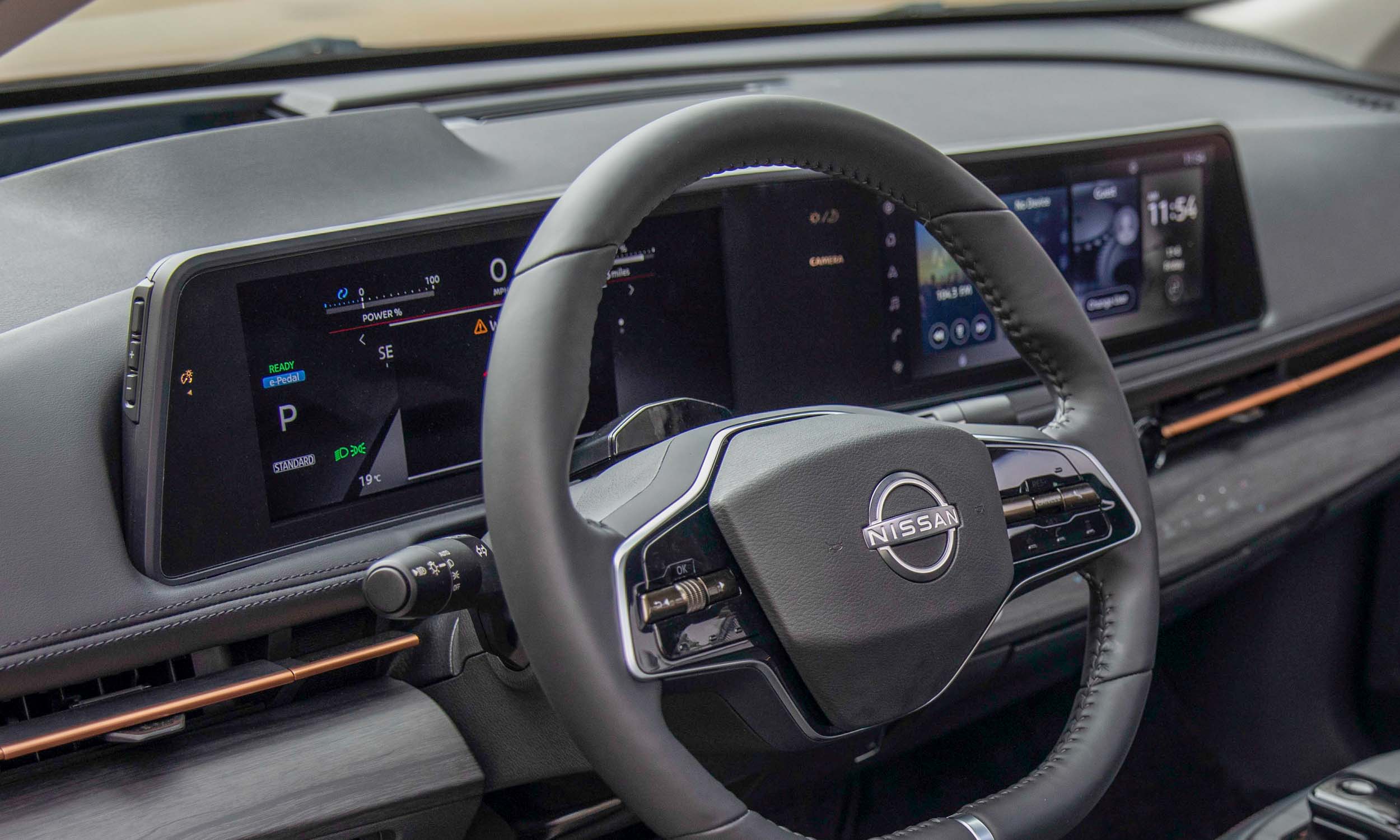 © Nissan North America
Dual Displays
The dashboard of the 2023 Nissan Ariya also integrates two 12.3-inch displays — one in the center as the main user interface, as well as one for a configurable driver display. Information can be swiped between screens so the driver can prioritize what gets displayed behind the wheel. Interfacing with Ariya can be accomplished via the touchscreen or with voice recognition. 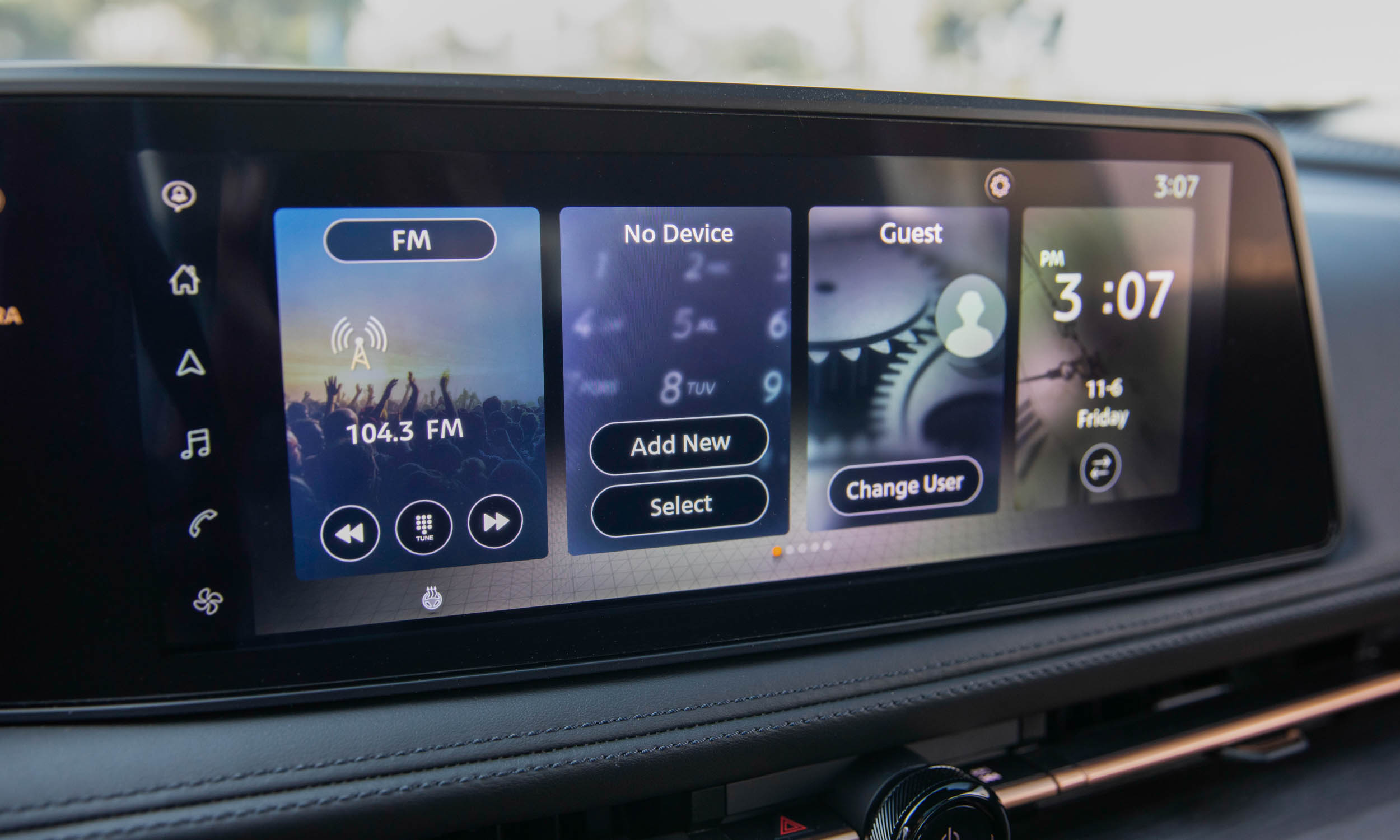 © Nissan North America
High Tech
The 2023 Nissan Ariya also features Apple CarPlay (wireless) and Android Auto (wired), as well as multiple USB ports for front- and rear-seat occupants. Ariya will be the first Nissan model to provide over-the-air software updates for everything from the multimedia system to the electric and electronic architecture settings. 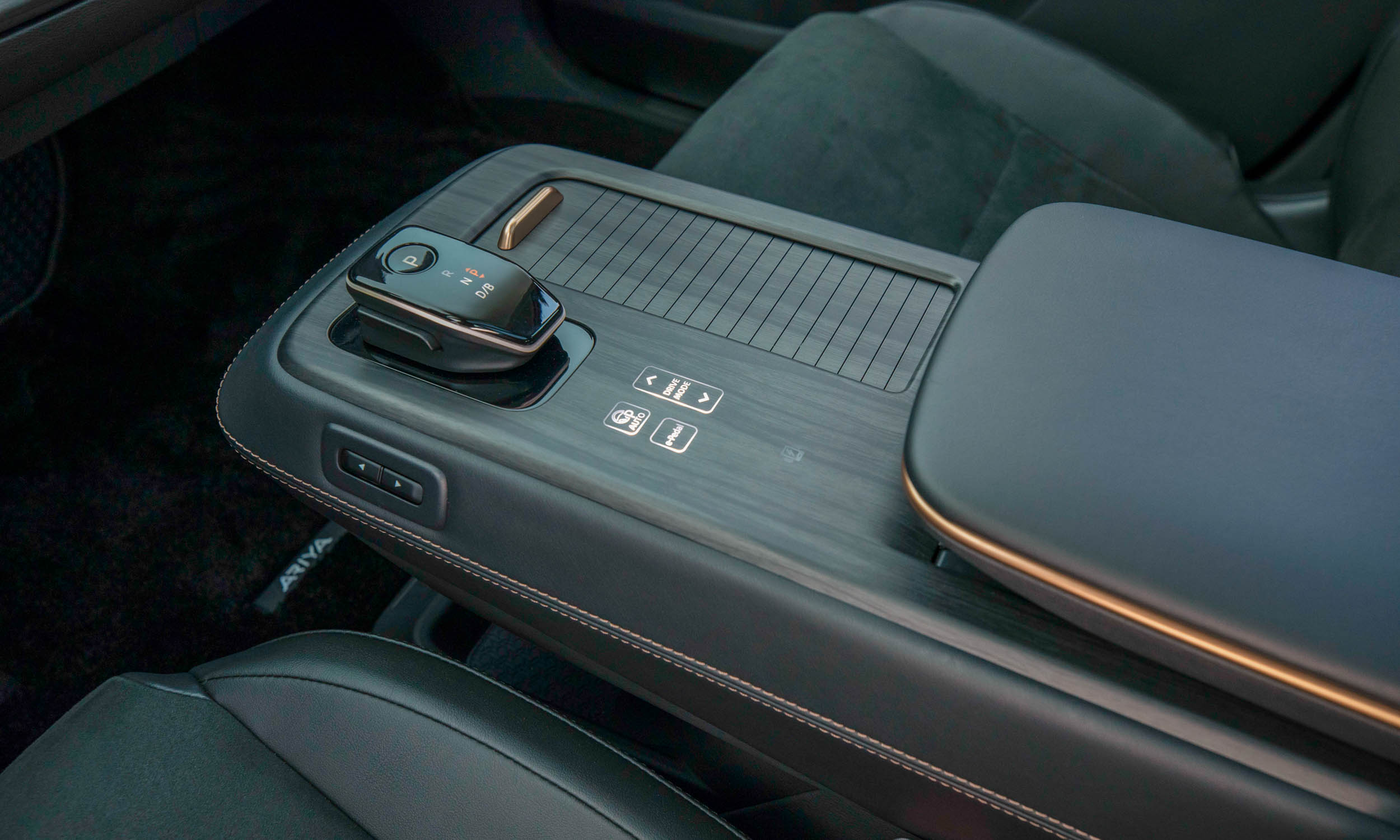 © Nissan North America
Personalized Seating
The center console of Ariya moves forward or backward to create the best fit for the driver; its position can be saved along with seat position. Alongside the gear selector are hidden integrated controls for driving modes and other features. 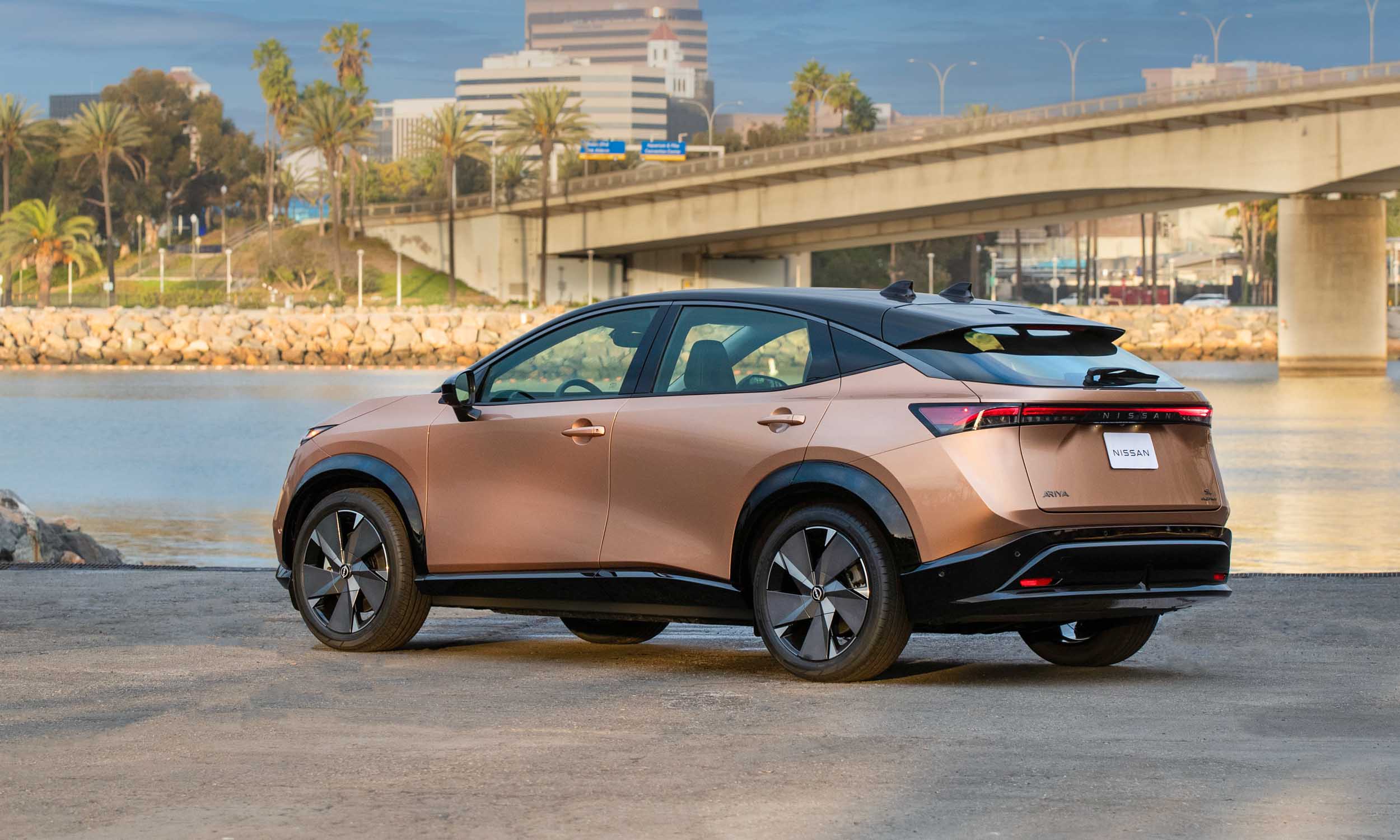 © Nissan North America
All-New Platform
The 2023 Nissan Ariya gets built on an all-new EV platform and will be available with either a 63 kWh battery or extended-range 87 kWh battery. With either option, the battery pack is positioned under the center of the vehicle, which enables the flat interior floor as well as lowers the center of gravity for improved handling. Nissan is currently accepting reservations for models exclusively with the extended-range battery; however, additional variants will eventually be available with the standard battery. 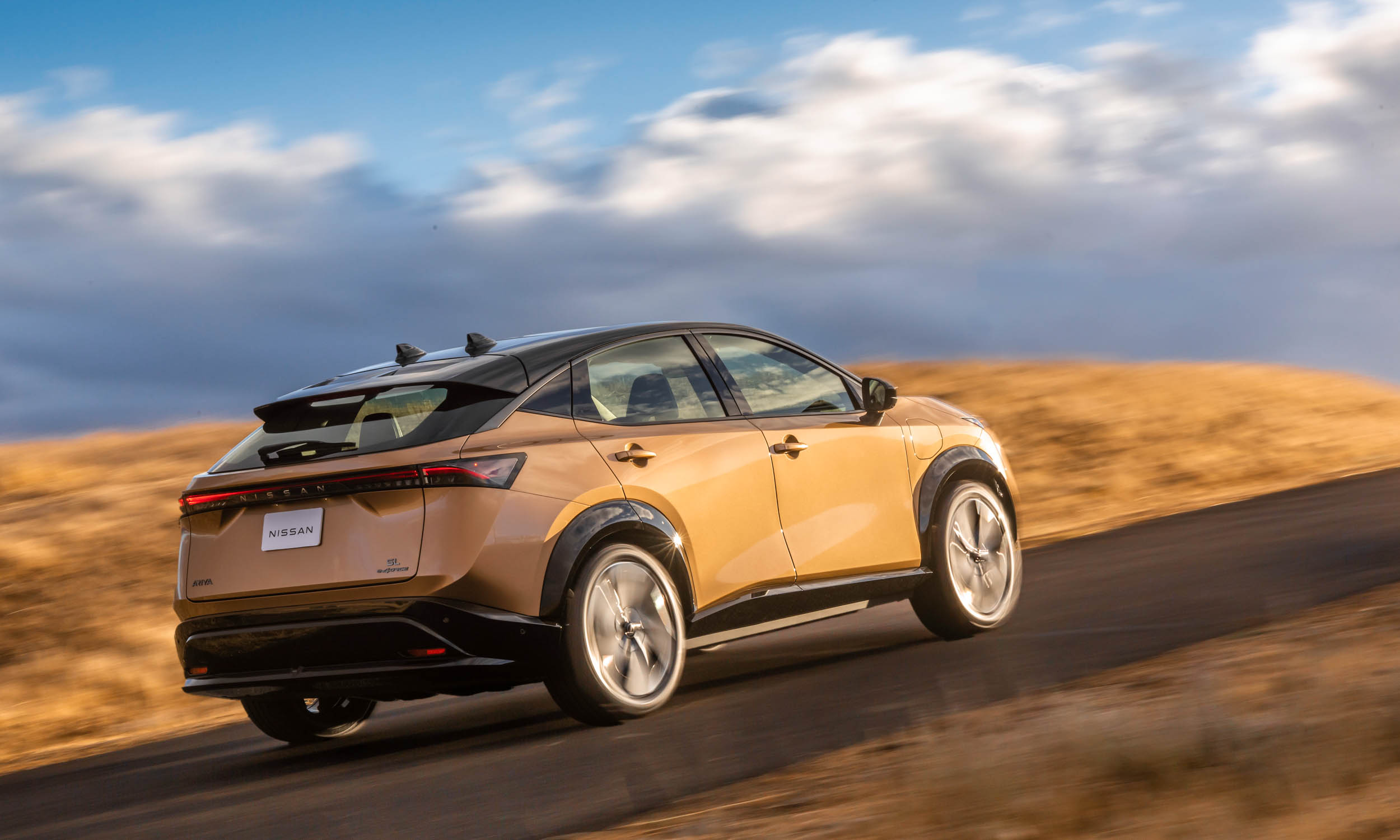 © Nissan North America
Plenty of Power
The single-motor Ariya with the extended battery (initially standard for U.S. models) will deliver 238 horsepower and 221 lb-ft of torque, while dual-motor variants will bump output to 389 horsepower and 442 lb-ft of torque, which should provide quick acceleration. The Ariya will also have e-Pedal — a feature introduced on the LEAF — which allows the driver to operate the vehicle using one pedal — the accelerator — for both acceleration and deceleration all the way to a complete stop. 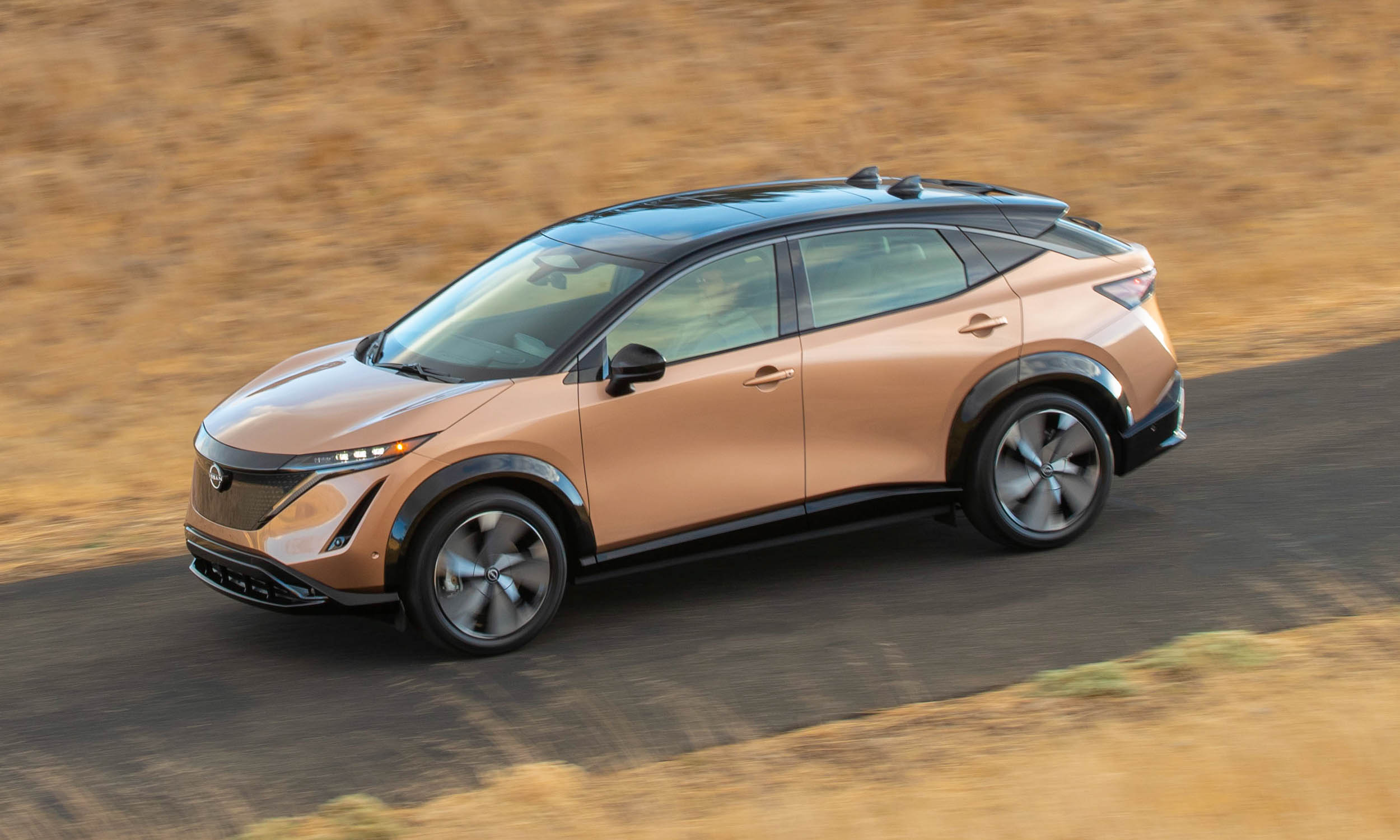 © Nissan North America
e-4ORCE
The standard Ariya will have front-wheel drive; the dual motor version not only adds more power, it also improves traction thanks to Nissan’s advanced all-wheel-control system called e-4ORCE. In addition to sending torque to the front and rear as needed, the system can apply independent brake control at each of the four wheels to maximize cornering stability and overall handling. 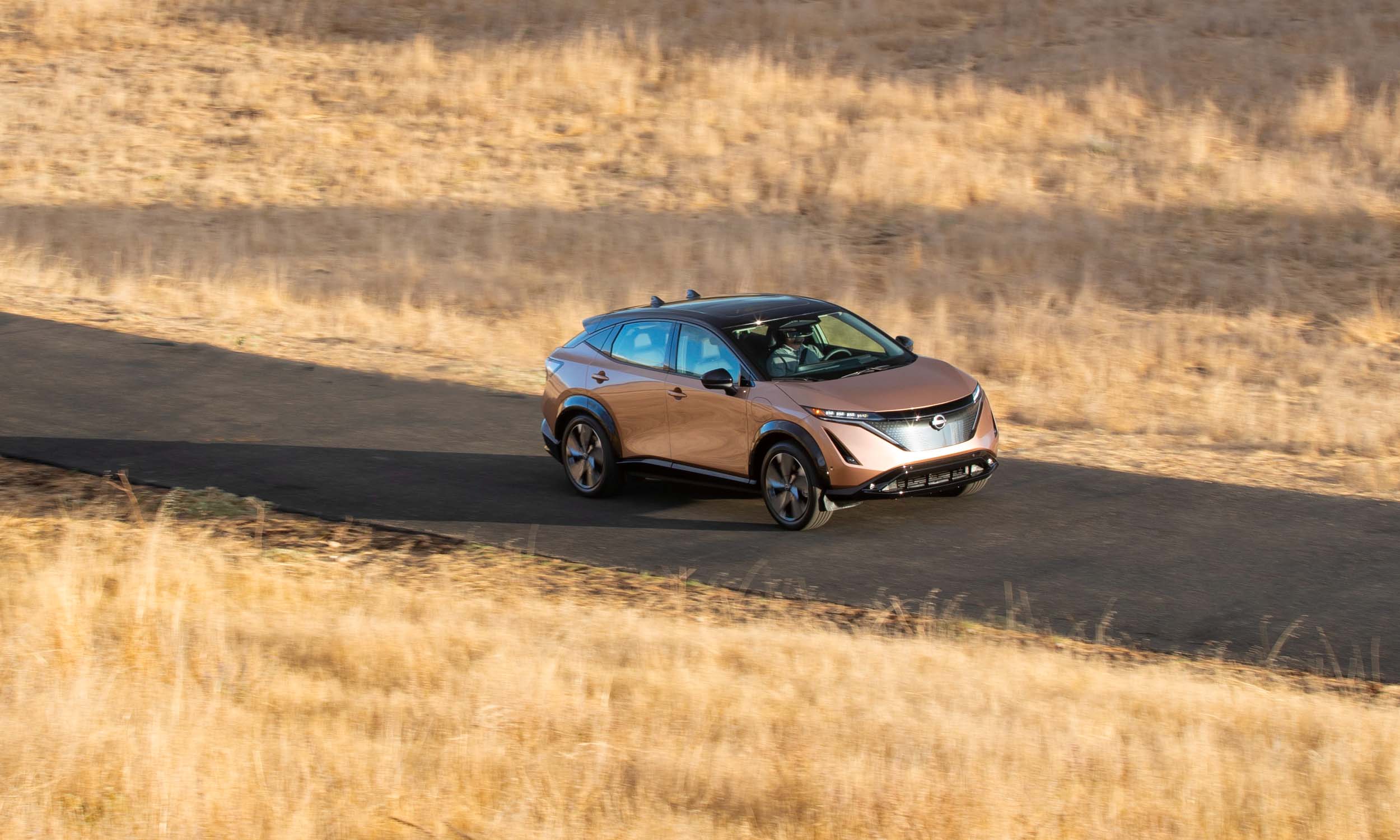 © Nissan North America
Range and Charging
With the extended-range battery, the Ariya should have an anticipated driving range as high as 300 miles; however, different trim levels will have varying ranges. The dual-motor e-4ORCE variants will be able to travel around 265 miles on a single charge. These are Nissan’s estimates; expect these figures to adjust slightly once official numbers are released by the U.S. EPA. At a Level 2 charger, the 2023 Nissan Ariya will charge at a rate of up to 7.2 kW; a high-speed DC charger will enable up to 130 kW. 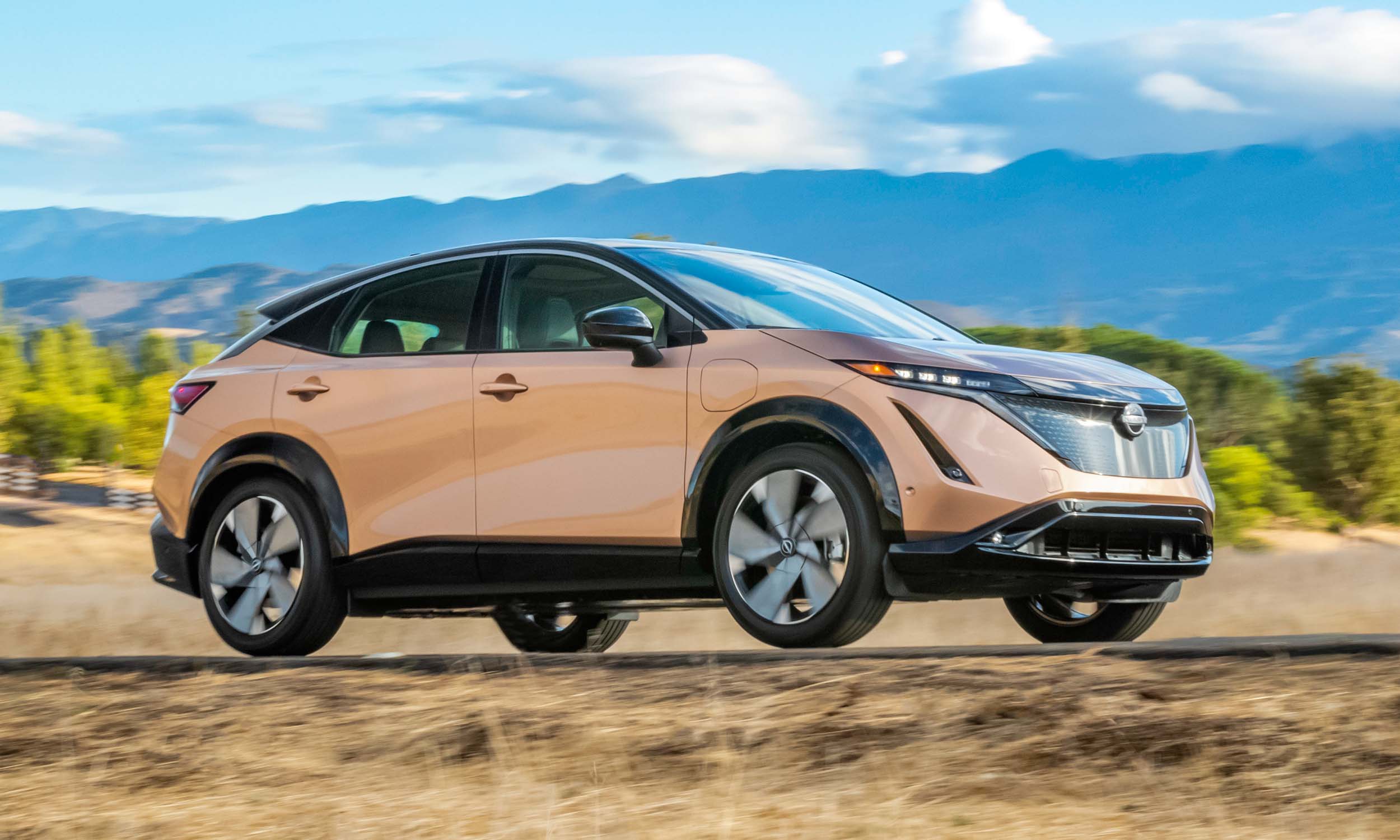 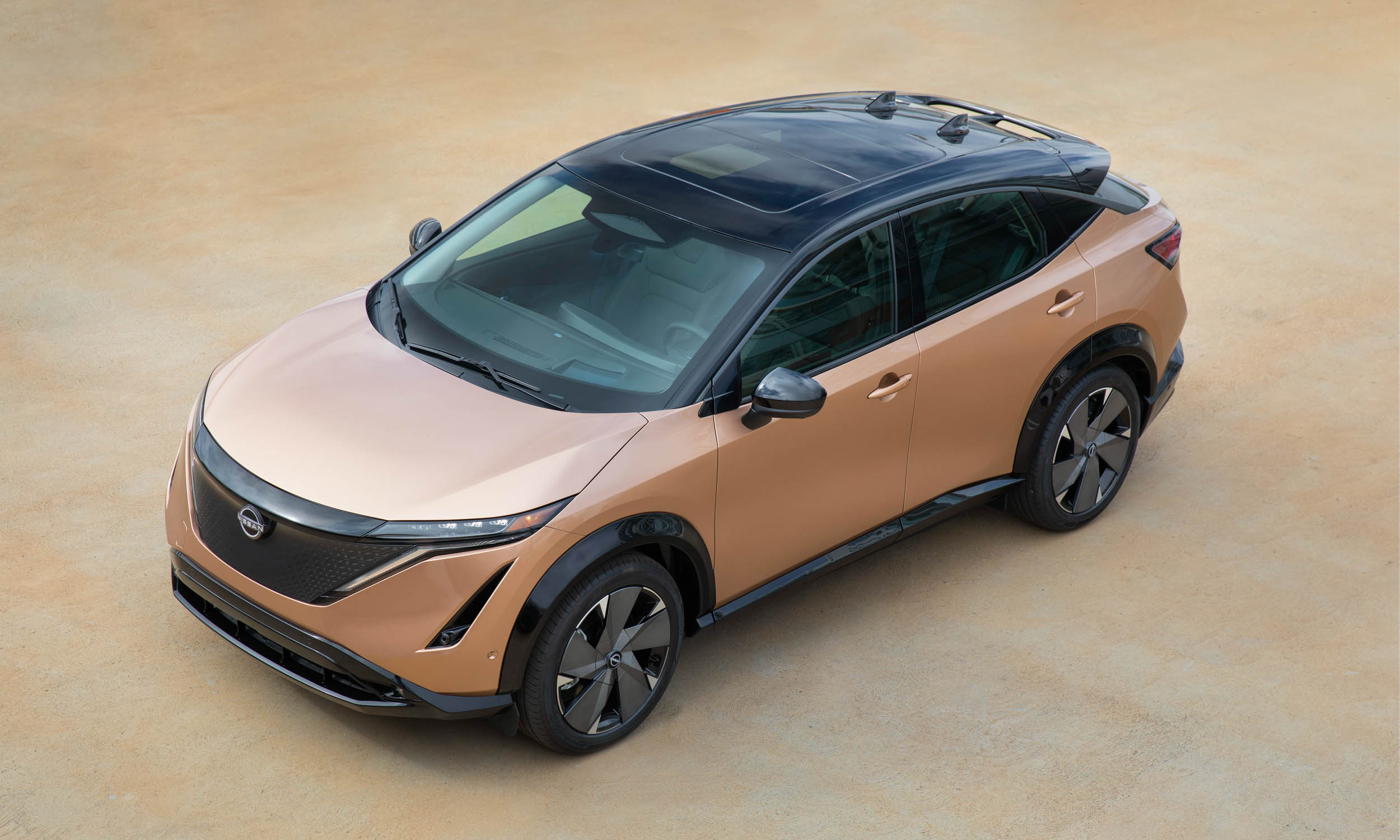 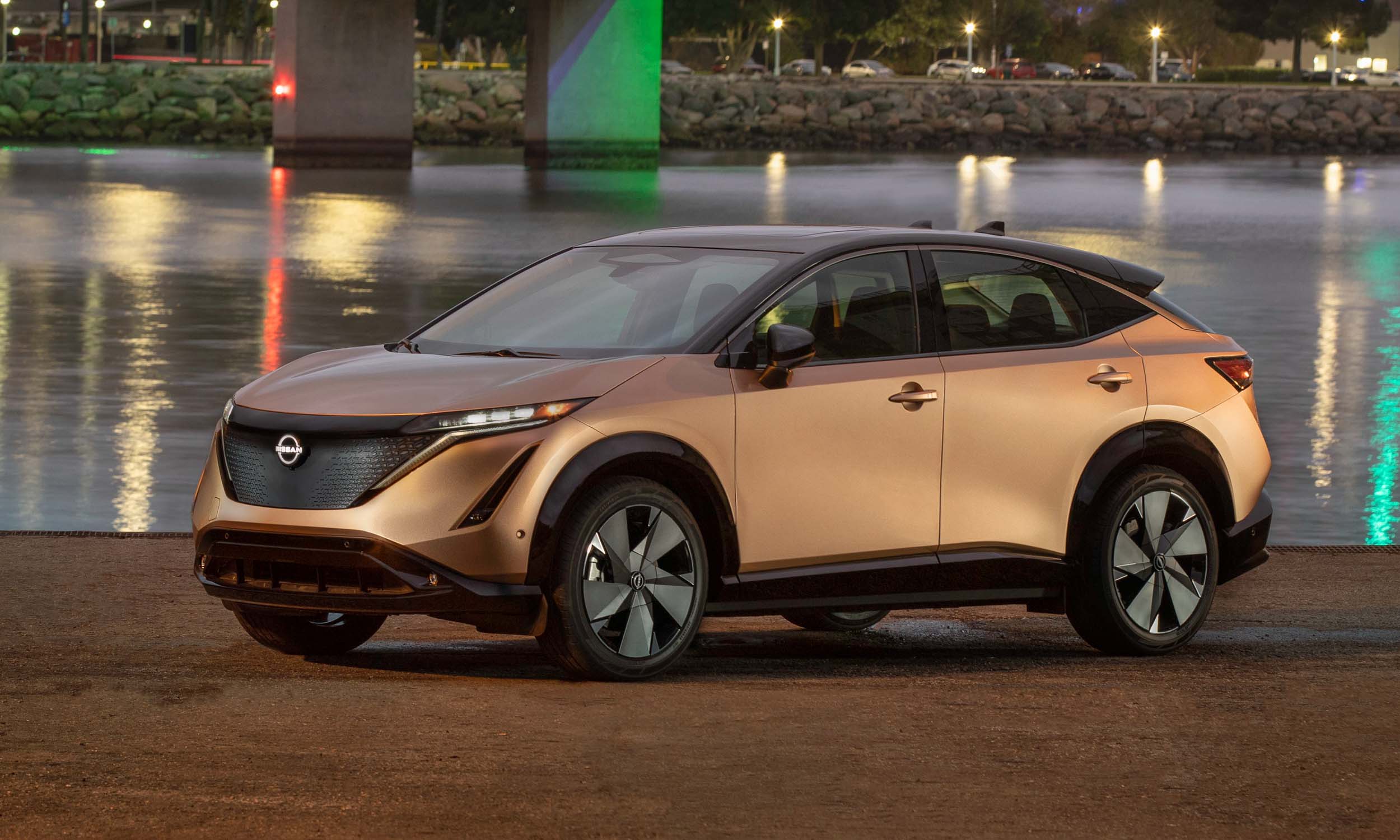 © Nissan North America
Reserve Now
Nissan recently announced that it’s now accepting reservations for the Ariya, which will initially be available in one of four trim levels: Venture+ ($45,950), Evolve+ ($48,950), Premiere ($53,450) and Platinum+ e-4ORCE AWD ($58,950). Reservations can be made at https://www.nissanusa.com/ariya/reserve. The first 10,000 reservations made before Jan. 31, 2022, will qualify for a two year free EVgo membership plus $500 in charging credits. Deliveries are expected to begin in autumn of 2022.