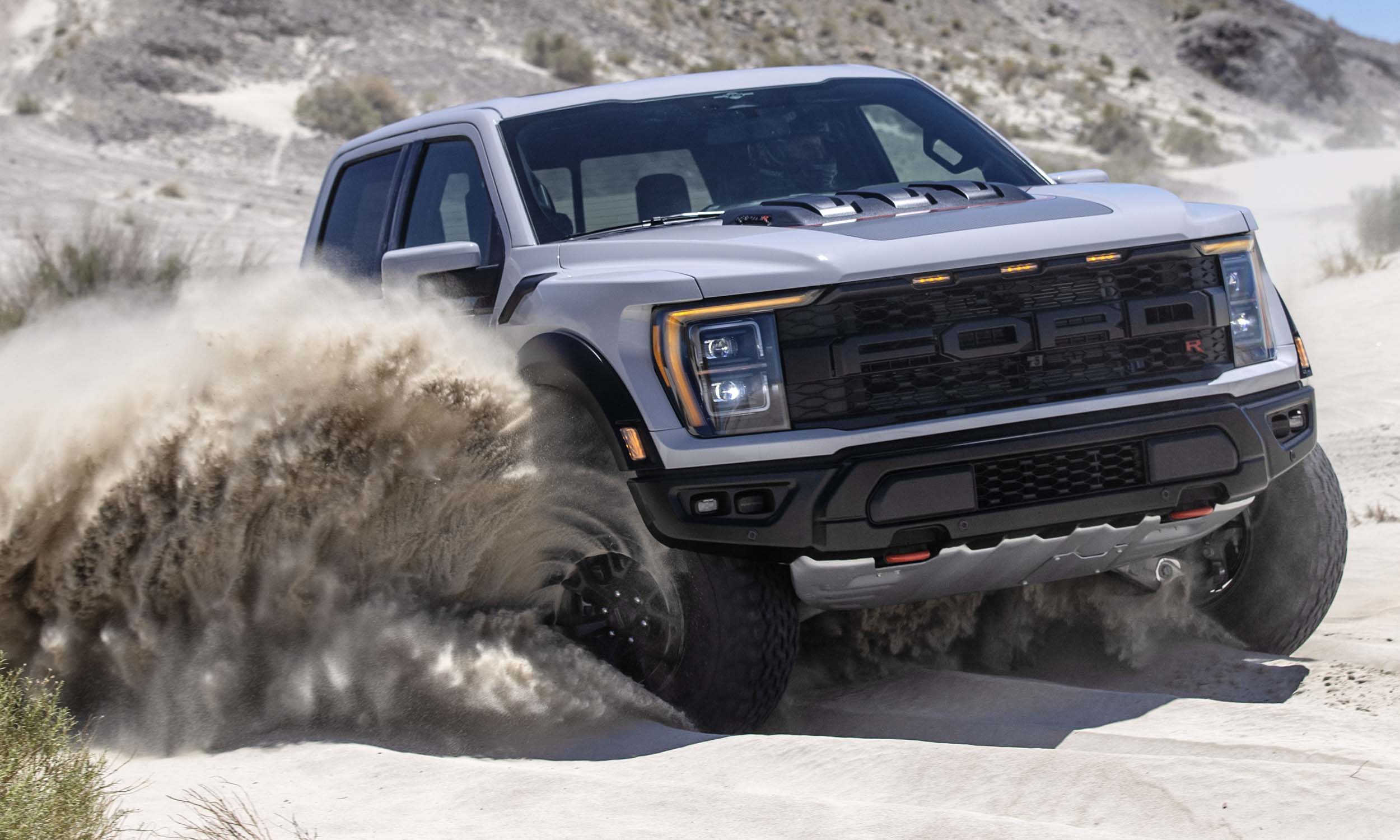 © Ford Motor Company
V8 Raptor R
More than a decade has passed since Ford introduced the first F-150 Raptor — an extreme off-road machine direct from the factory. With the ability to tackle tough terrain at high speed, the Raptor had no peer. Since then the competitive landscape has changed, so Ford had to up its off-road game. The new-generation Raptor debuted last year with new styling, more capability and a powerful EcoBoost V6 engine. Today the Blue Oval takes Raptor to the next level with a V8-powered 2023 Ford F-150 Raptor R claiming more power and capability than ever before. 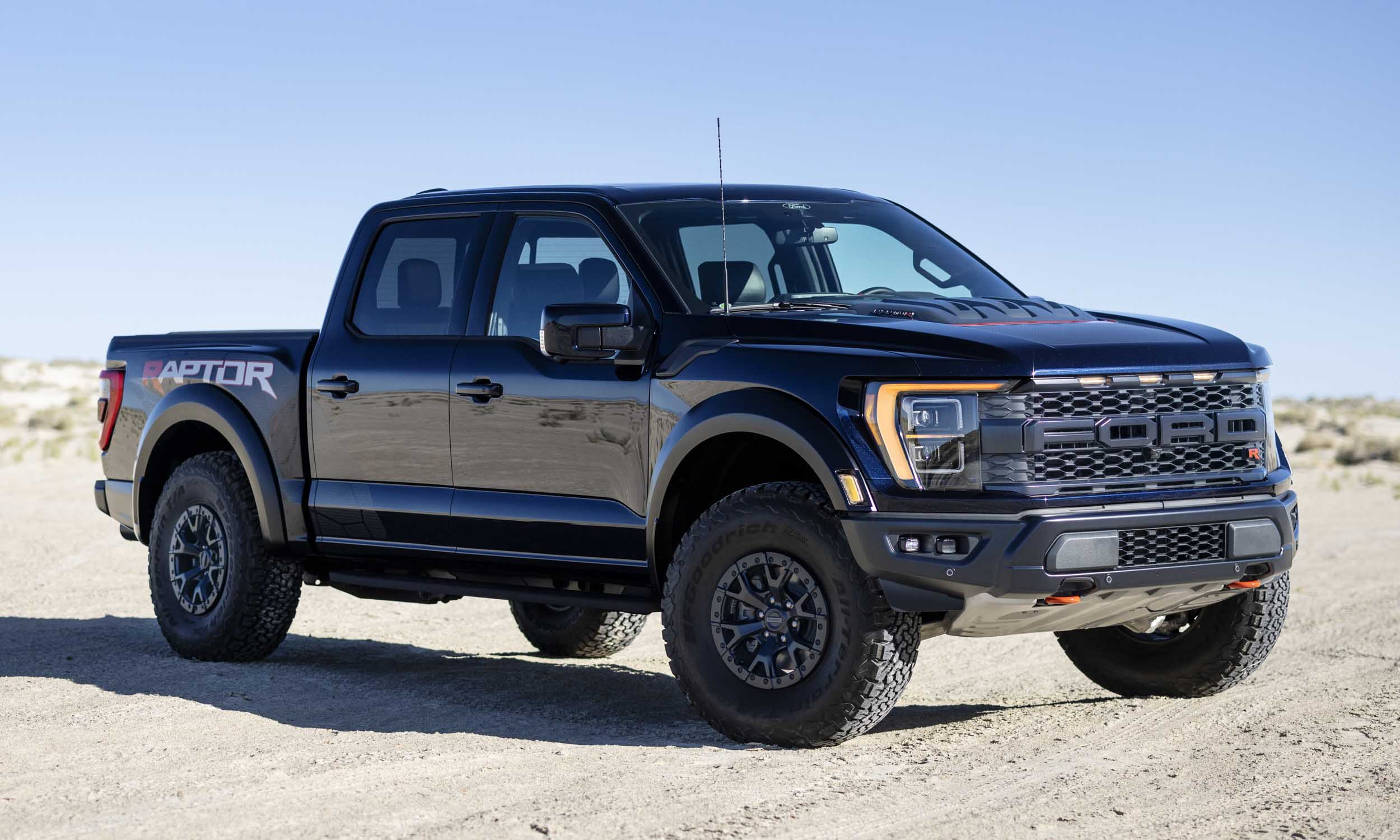 © Ford Motor Company
The Ultimate
“Raptor R is our ultimate Raptor,” said Carl Widmann, Ford Performance chief engineer. “When customers experience Raptor R in the desert and beyond, it will make the hairs on the back of their necks stand up — and they’ll love every second of it,” Widmann effused. 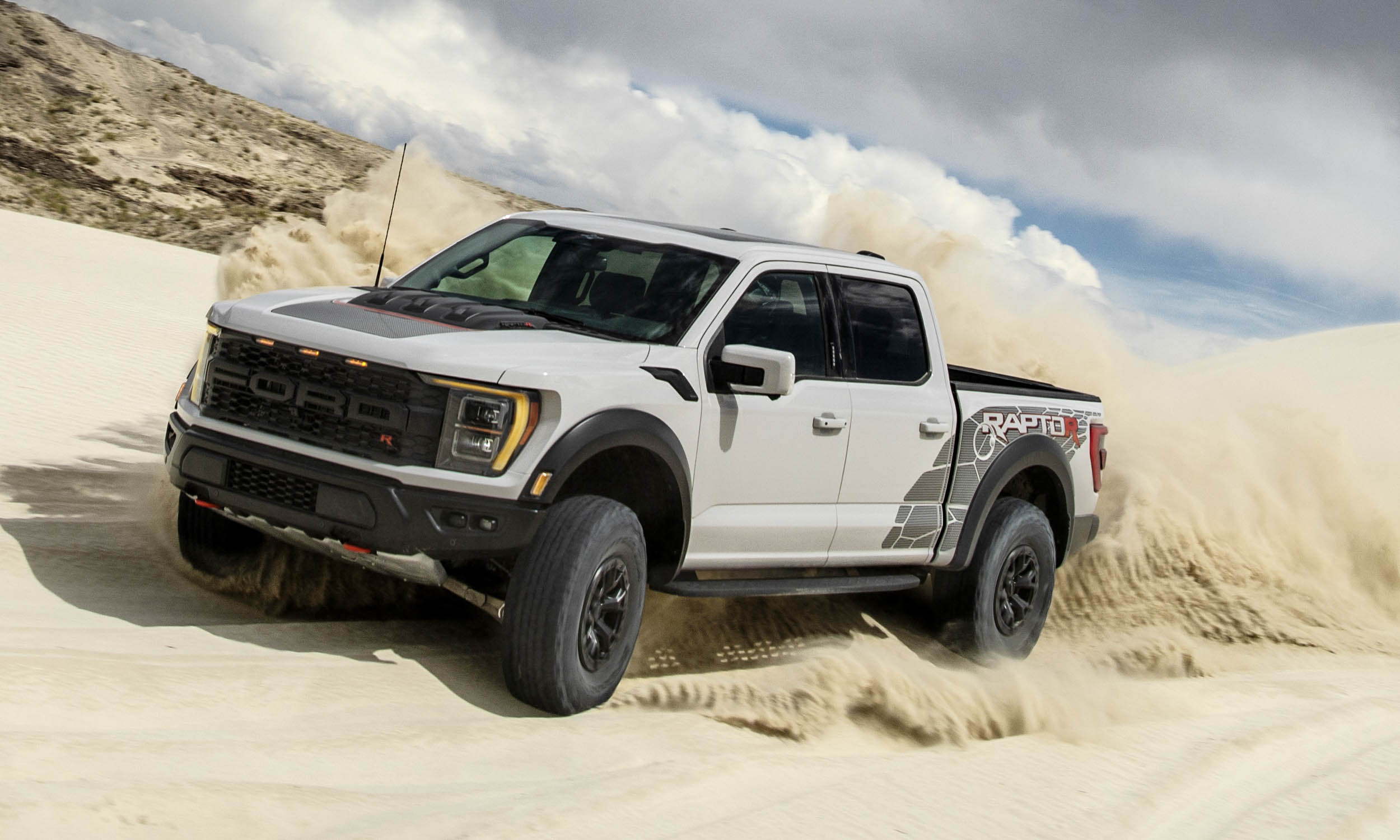 © Ford Motor Company
The V8 Returns
When Ford introduced the current-generation Raptor, there was some disappointment among enthusiasts since this big, powerful truck no longer had V8 power. The 2023 Ford F-150 Raptor R takes care of that — under the hood lurks the 5.2-liter supercharged V8 engine from the Mustang Shelby GT500. The motor has been optimized to handle the Raptor’s off-road performance, pumping out 700 horsepower and 640 lb-ft of torque. All that power gets delivered via a smooth-shifting 10-speed SelectShift automatic transmission. 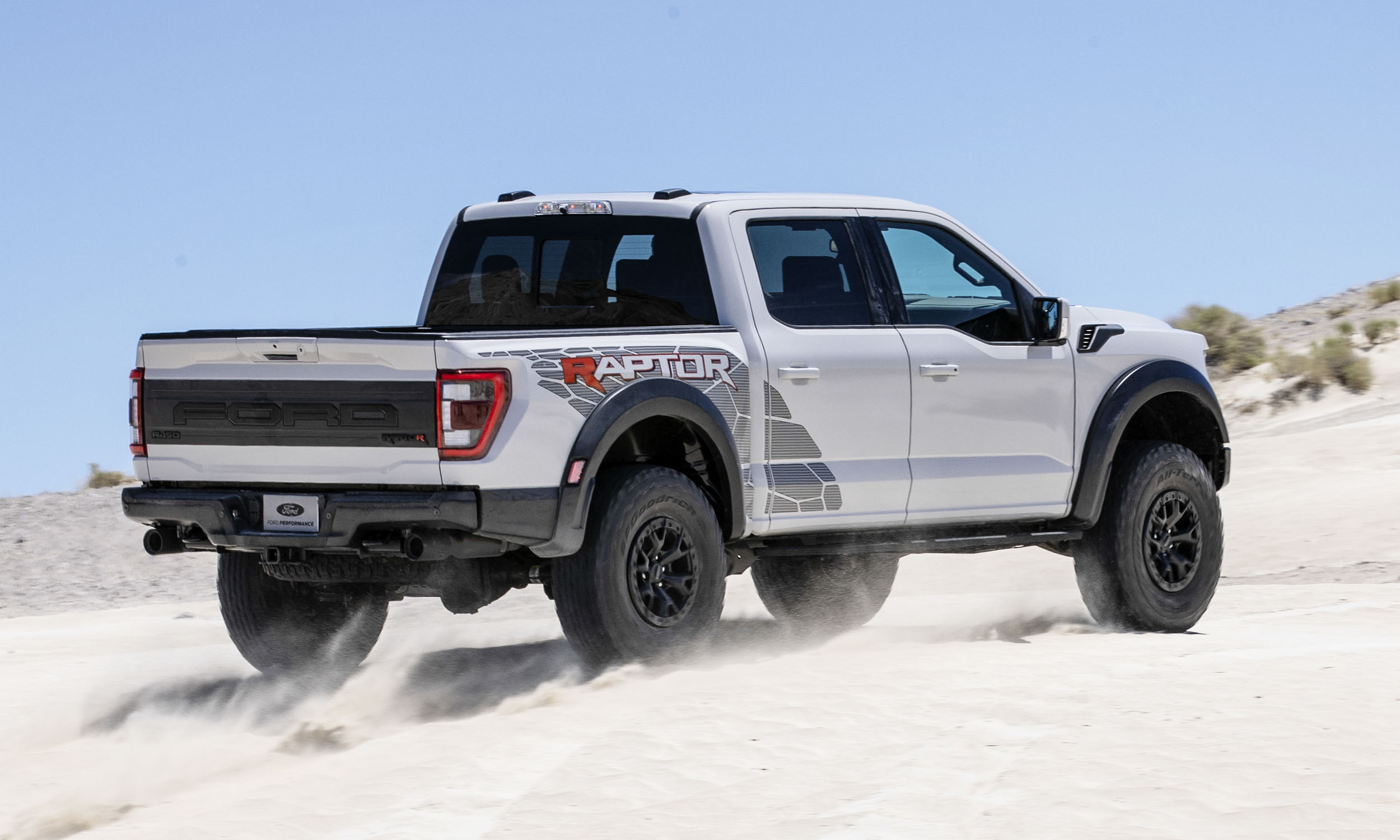 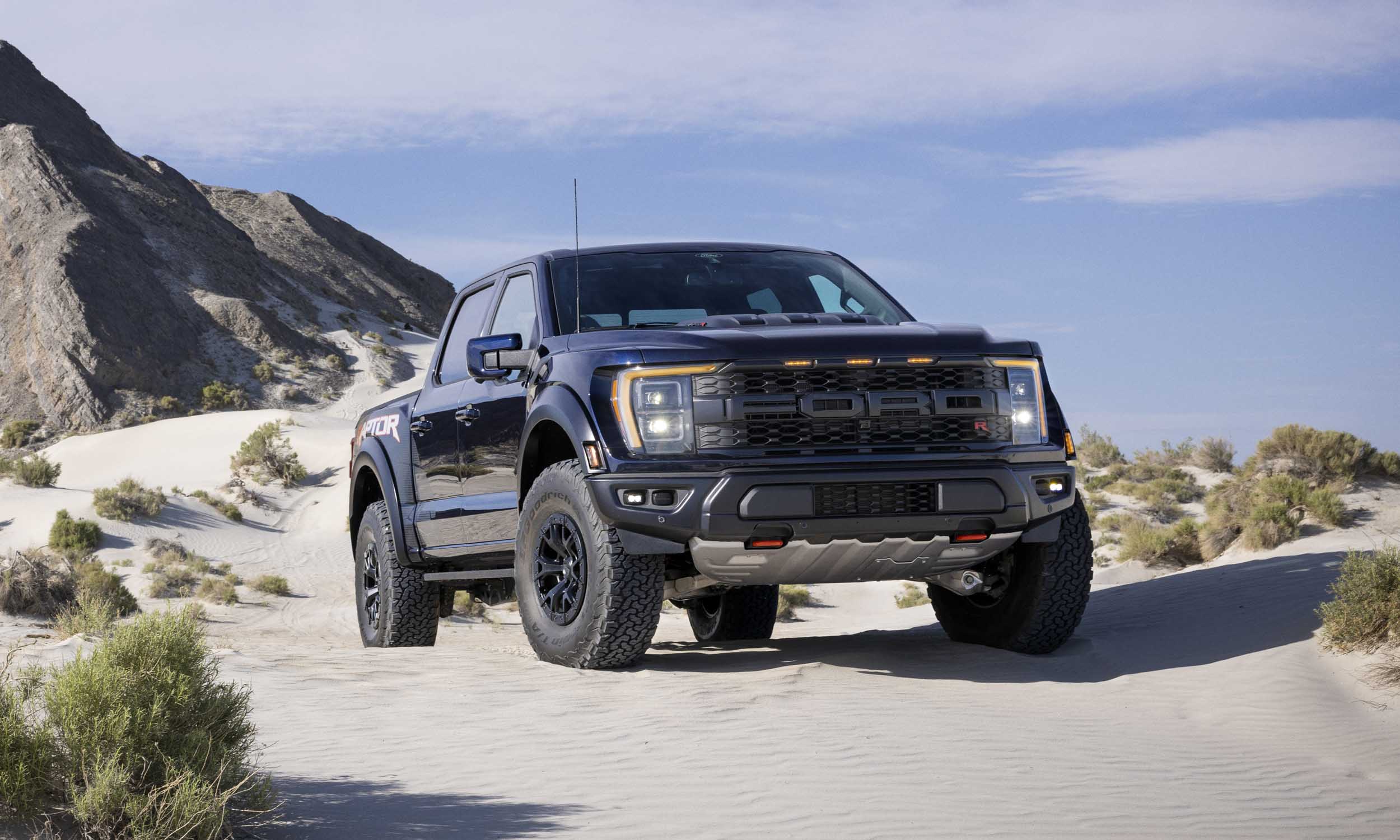 © Ford Motor Company
Customer Demand
“We’ve heard our customers demanding the sound and power of a V8 back in Raptor,” said Widmann. “That’s not something we were going to rush. This supercharged 5.2-liter V8 is the ideal fusion of high-density power paired with the third generation Raptor’s all-new rear suspension and shocks to deliver a one-two punch that goes far beyond the sum of its parts,” Widman observed. 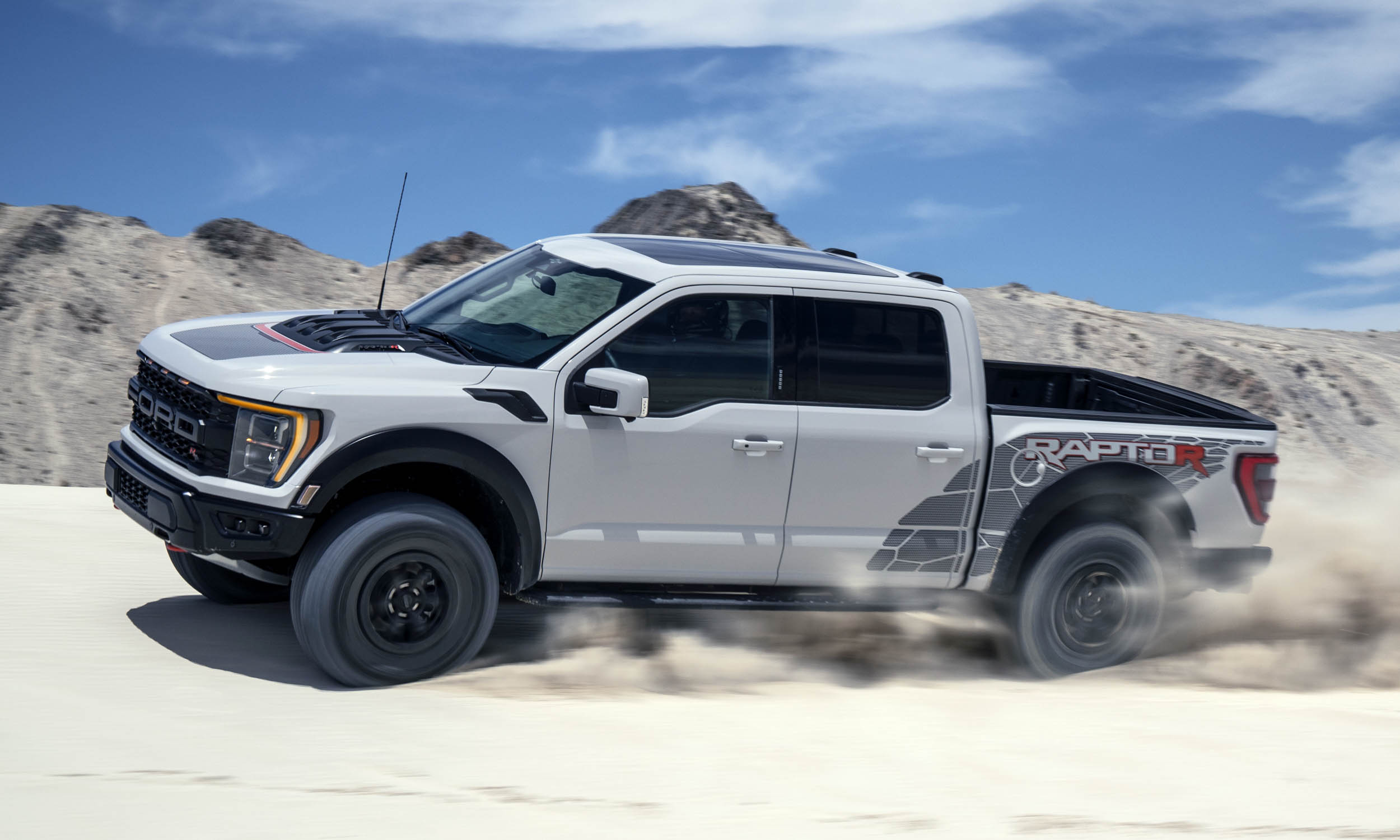 © Ford Motor Company
Optimized for Raptor R
Ford Performance recalibrated the V8’s supercharger with a new pulley, installed to prepare the Raptor R for the trials of off-road use. This increases torque delivery at the low- and mid-range rpm, which lets the truck deliver better performance in most situations. Other updates include upgrading the exhaust manifold to a stainless-steel design , as well as a unique oil cooler and filter. The air intake volume in the Raptor R increases by 66 percent thanks to a wider air inlet and higher-flow conical air filter. 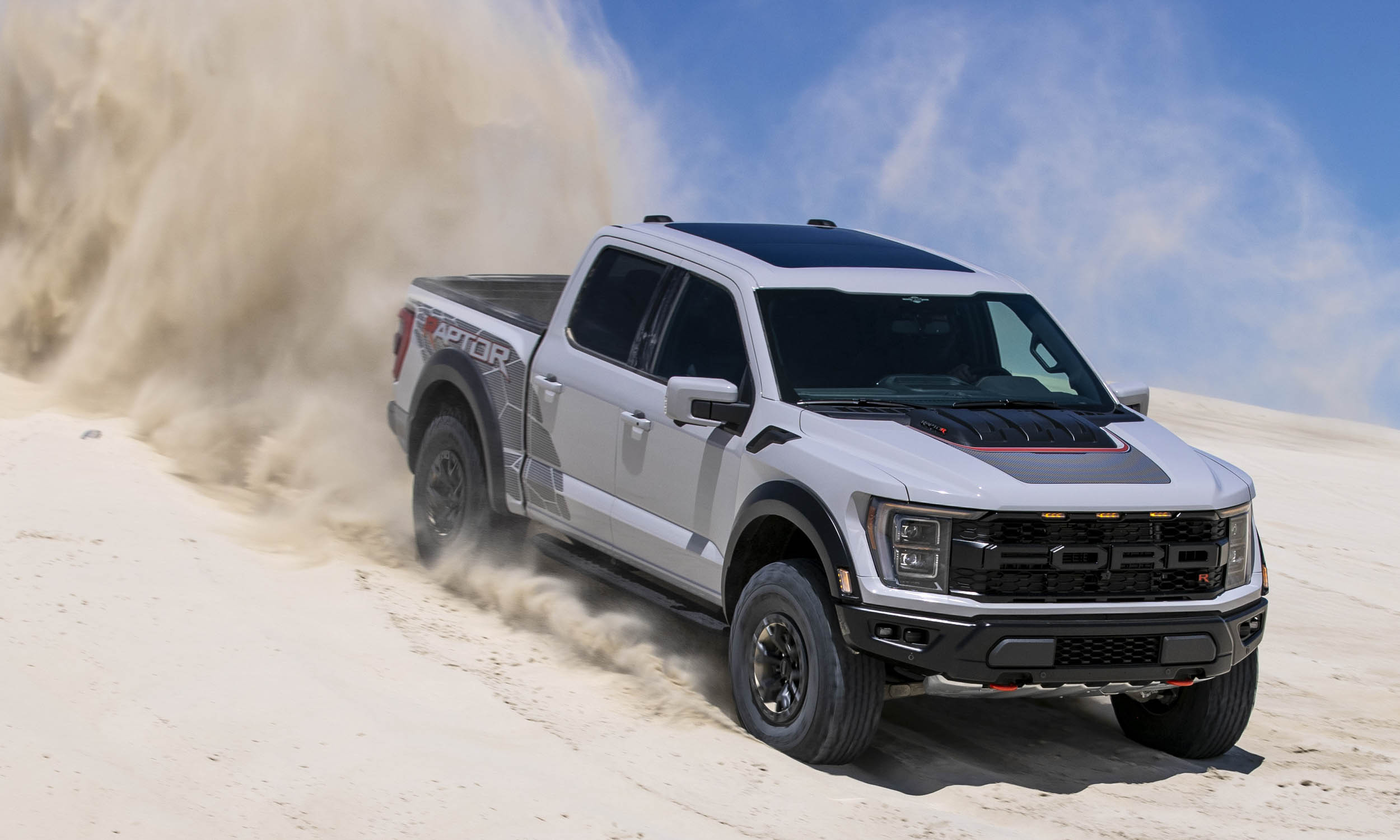 © Ford Motor Company
Off-Road Suspension
Although the additional power is important, without the proper underpinnings the Raptor R is just another powerful pickup truck. But Ford has this covered. The Raptor R features a 5-link rear suspension with extra-long trailing arms to better maintain axle position on rough terrain. A Panhard rod and 24-inch coil springs are all optimized for excellent stability while traversing desert terrain at high speeds. 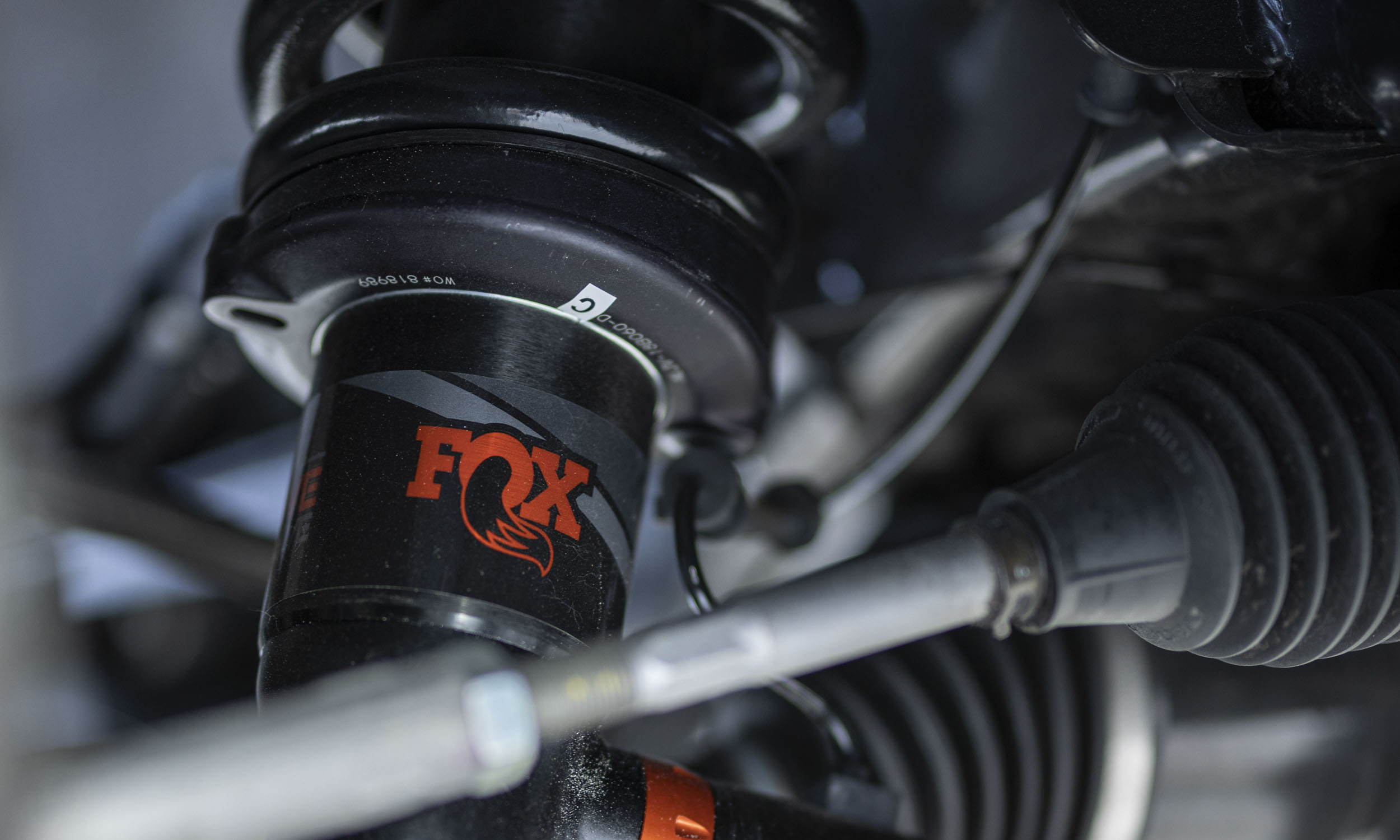 © Ford Motor Company
Fox Shocks
The Raptor R also gets advanced FOX Live Valve shocks designed to provide the best balance of ride quality and roll control on- and off-road. Electronically controlled dampers use suspension height sensors to monitor terrain conditions independently, with the ability to adjust the suspension hundreds of times per second. Wheel travel of 13 inches in front and 14.1 inches in back gives the Raptor R plenty of ability to handle larger objects in its path. 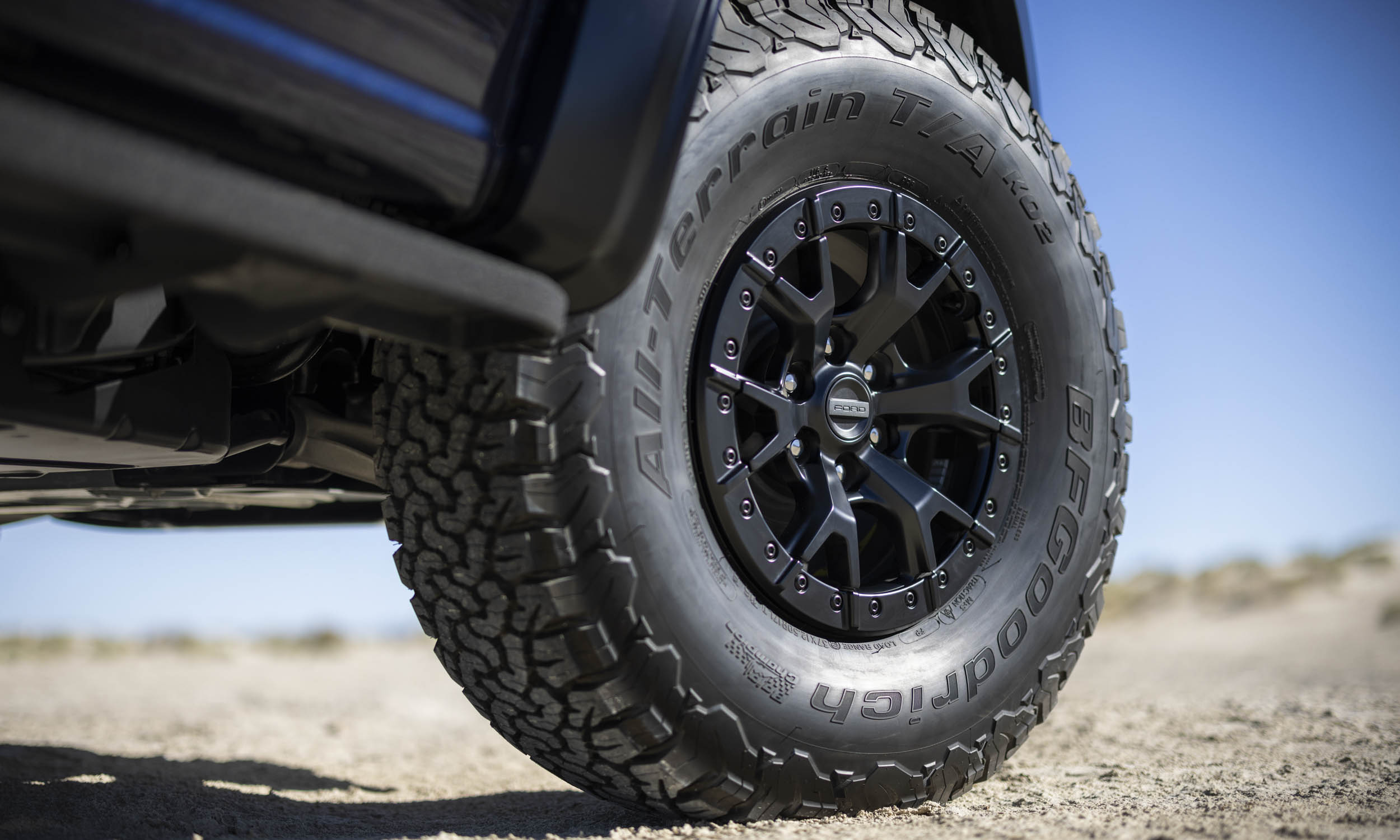 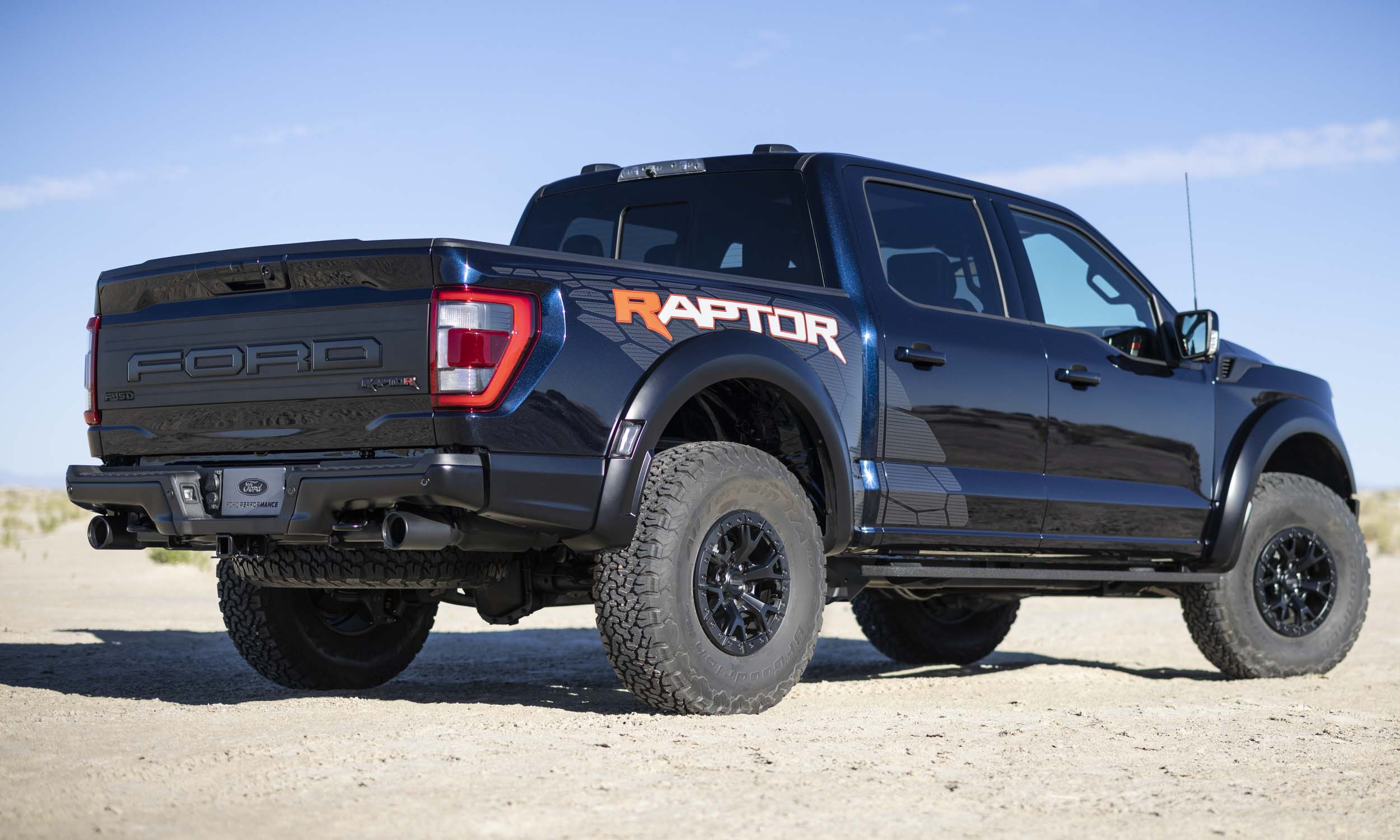 © Ford Motor Company
V8 Roar
Perhaps the biggest complaint about the EcoBoost-powered Raptor was the missing throaty V8 roar —Raptor R gets that and more. A new dual-exhaust system features a true pass-through muffler with an active valve system that can be adjusted by the driver for Normal, Sport, Quiet and Baja settings. These modes also adjust drive, steering, suspension, stability control and more with the driver having the option to save a custom setting, accessible via the ‘R’ button on the steering wheel. 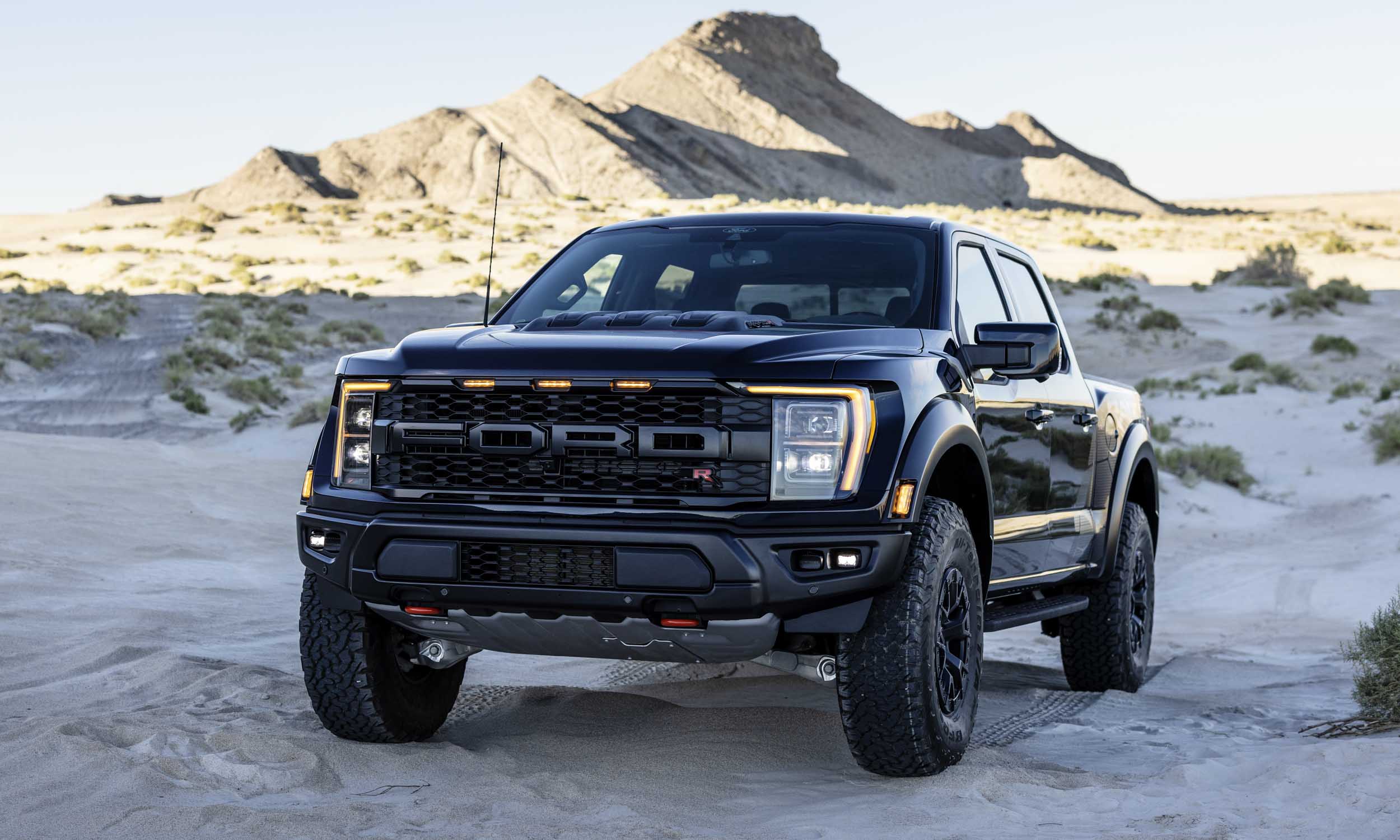 © Ford Motor Company
Standout Styling
The current Raptor already stands out from the rest of the F-150 lineup, and this new 2023 Ford F-150 Raptor R has some subtle differences that will add some distinction to this more powerful variant. Front and rear bumpers are all black, as are the cladding and wheels. On the bold grille is the orange ‘R’, the badge of Ford Performance. The R can also be found in the naming on the side of the engine power dome and on the tailgate applique. To accommodate the larger engine, the Raptor R’s power dome sits about one inch taller than the standard Raptor. 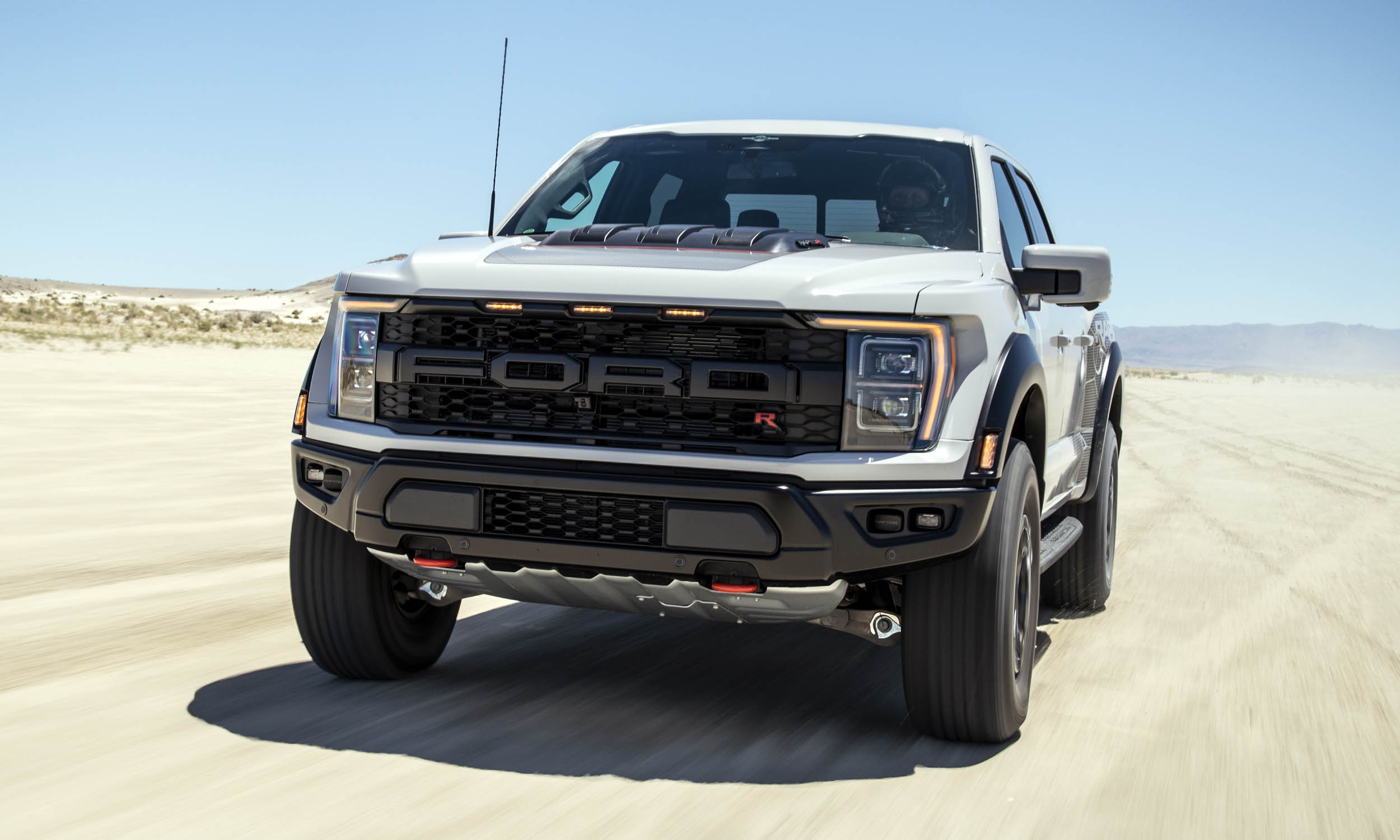 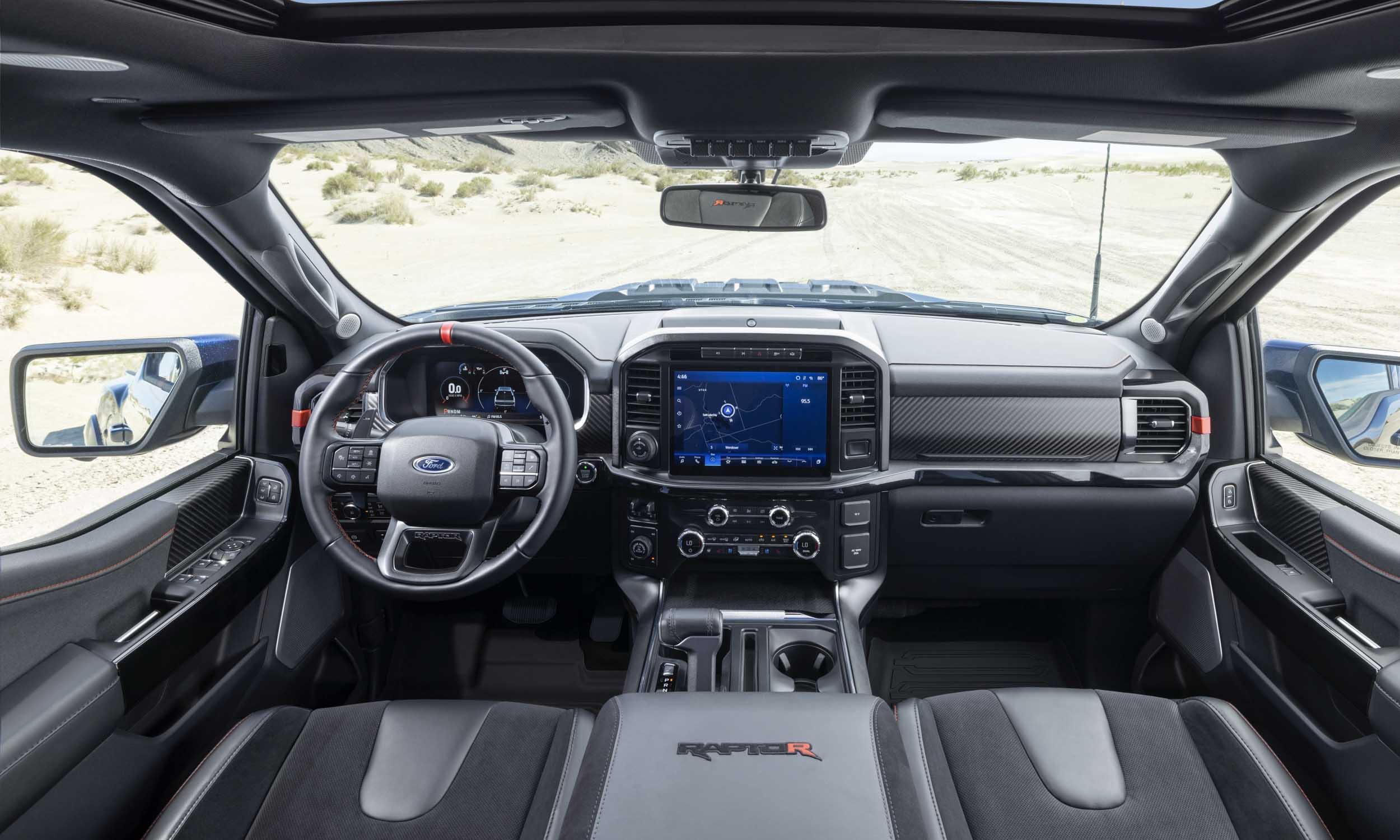 © Ford Motor Company
Differences Inside
Inside the Raptor R, the interior is completely black with distinctive Recaro sport seats trimmed in leather and Alcantara. A unique tri-axial carbon fiber weave can be found in the door trim as well as on the media bin cover and upper dashboard. A 12-inch touchscreen display with SYNC 4 technology and Apple CarPlay and Android Auto integration is also standard. 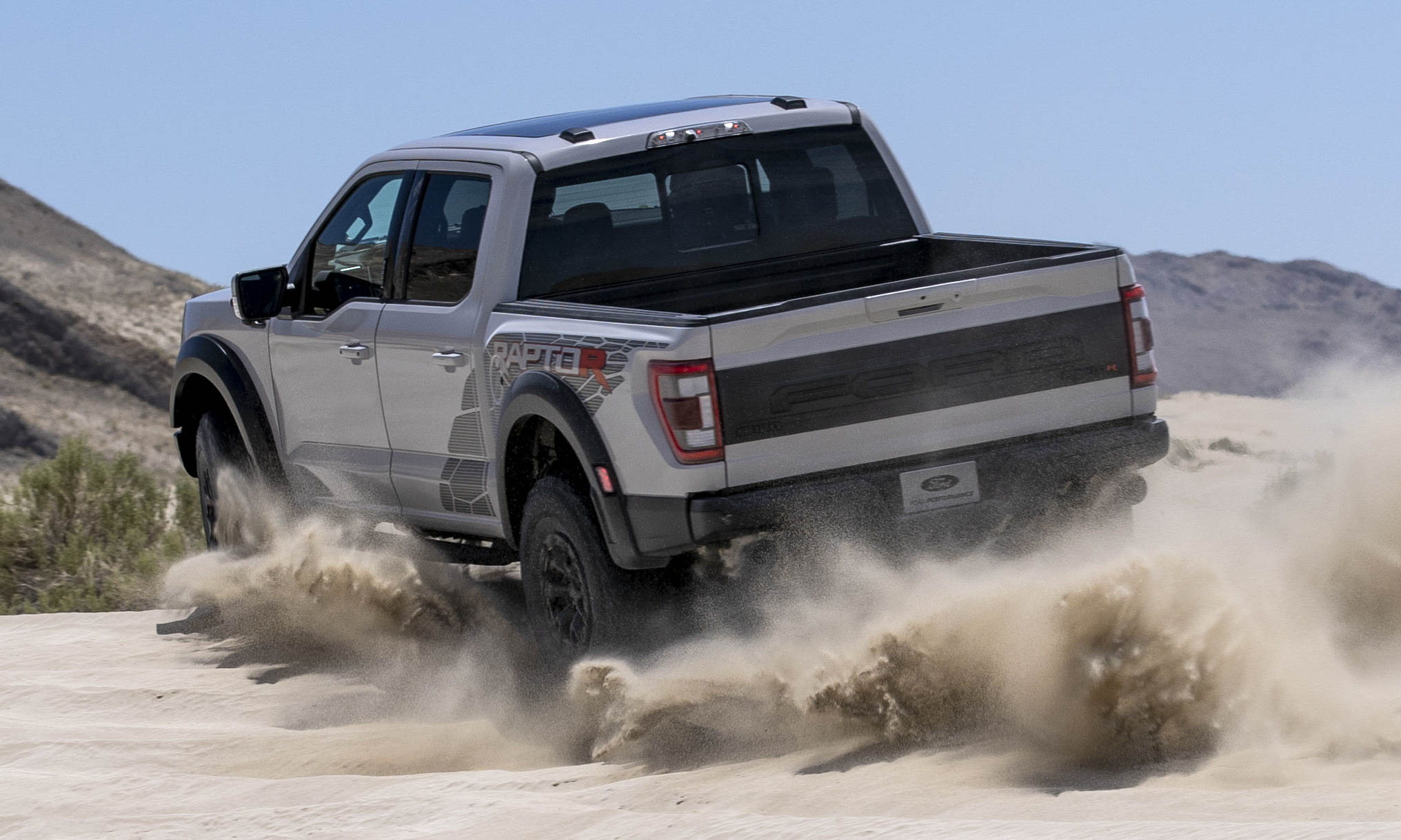 © Ford Motor Company
Coming This Fall
Interested customers can now place their orders for the 2023 F-150 Raptor R at their local dealer, but be prepared for a hefty price jump vs. the standard Raptor — the Raptor R has a starting price of $107,350. Production is slated to start later this year at Ford’s Dearborn Truck Plant in Michigan.