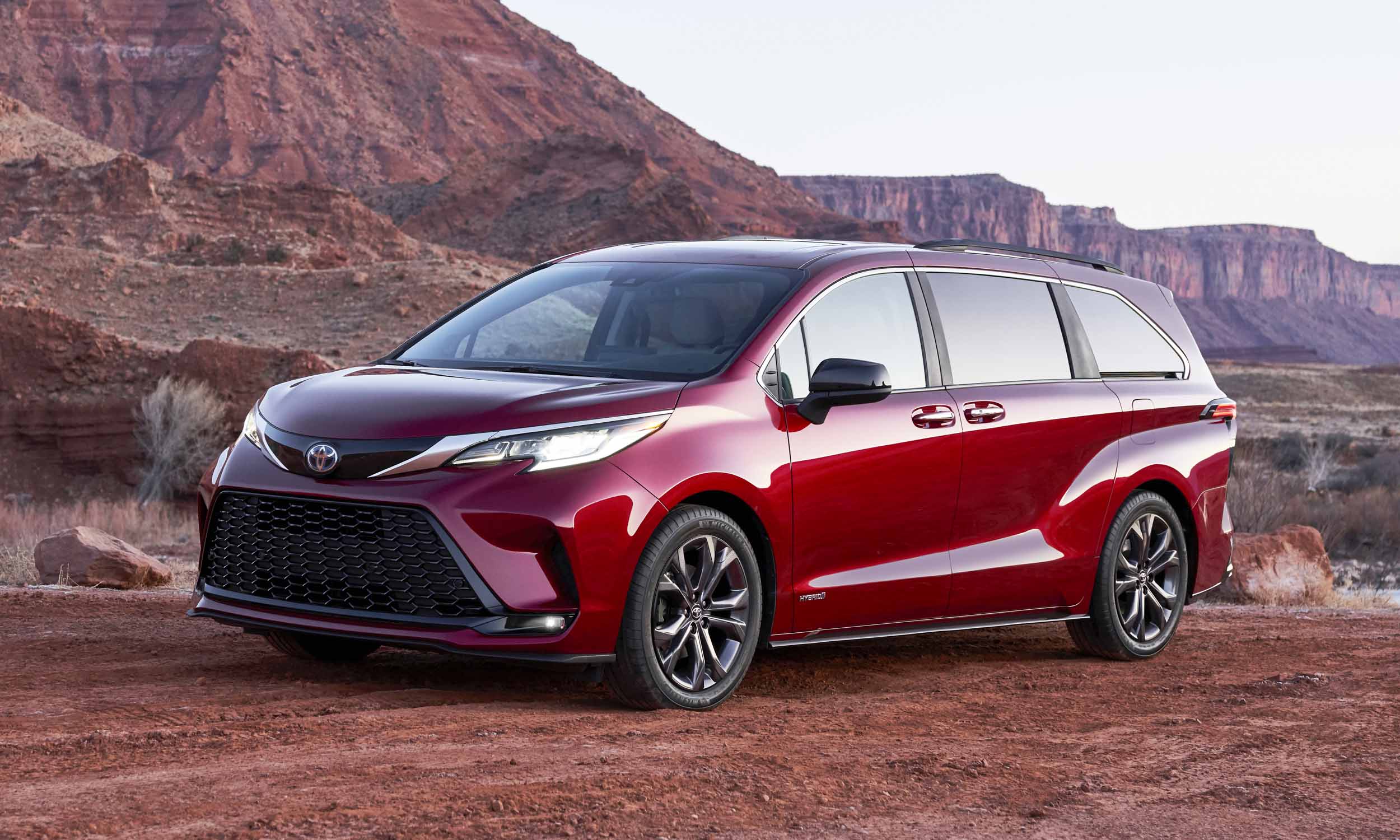 All Hybrid
Toyota has played a big part in making hybrid vehicles mainstream, beginning with the introduction of the Prius almost 20 years ago. Currently the Japan-based automaker offers seven hybrid models, and that number is about to go up with the introduction of the company’s first hybrid minivan: the all-new 2021 Toyota Sienna. With fresh styling, an all-new chassis and a range of new features, this new fourth-generation Sienna will be available exclusively with a hybrid powertrain. 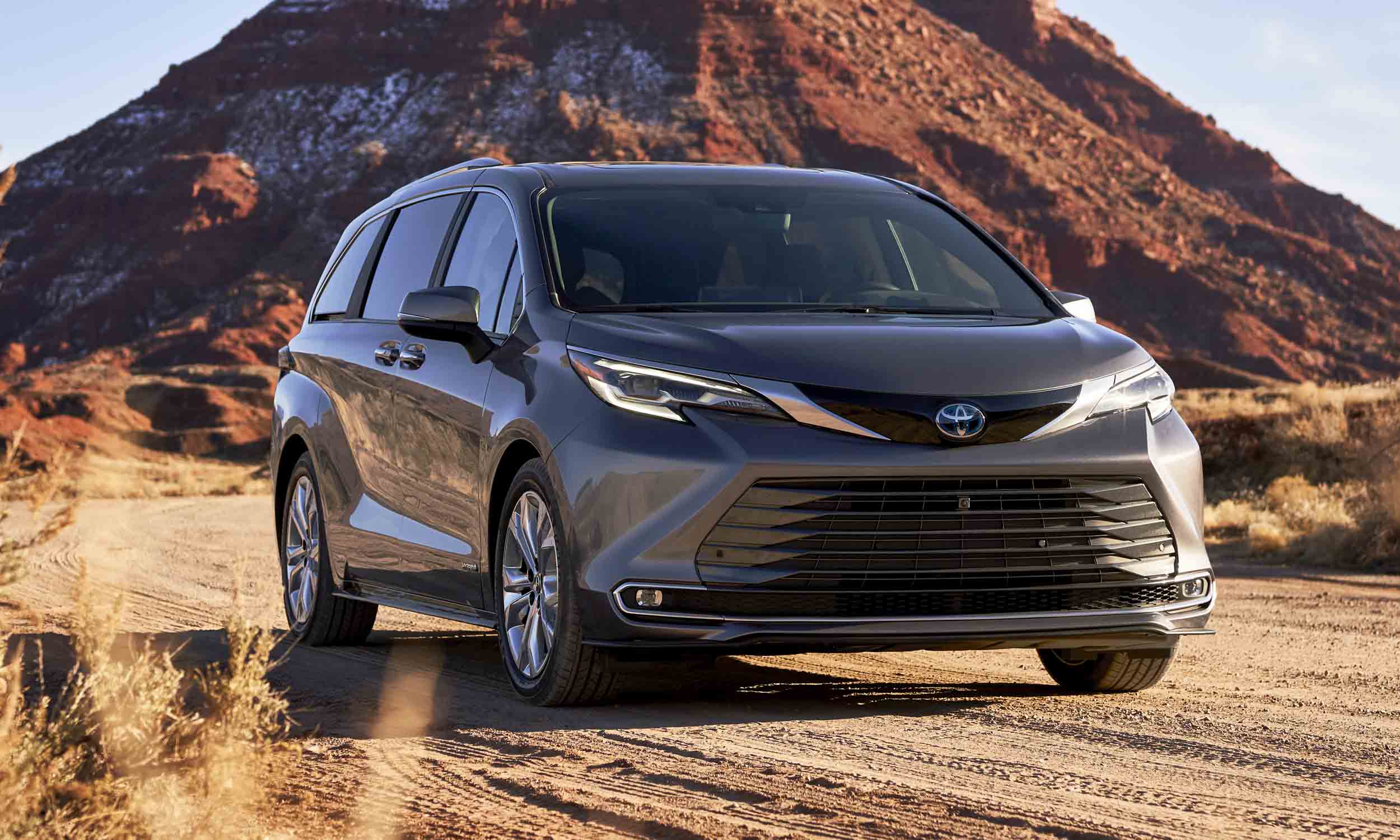 All New
“This is an all-new vehicle from the ground up, including a new chassis platform as well as a new electrical platform,” said Sienna Chief Engineer Monte Kaehr. “The development of the fourth generation Sienna was a huge undertaking but we always worked towards one single mission — to make the best van yet,” Kaehr enthused. The Sienna joins the Chrysler Pacifica Hybrid as the only hybrid minivans available in America. 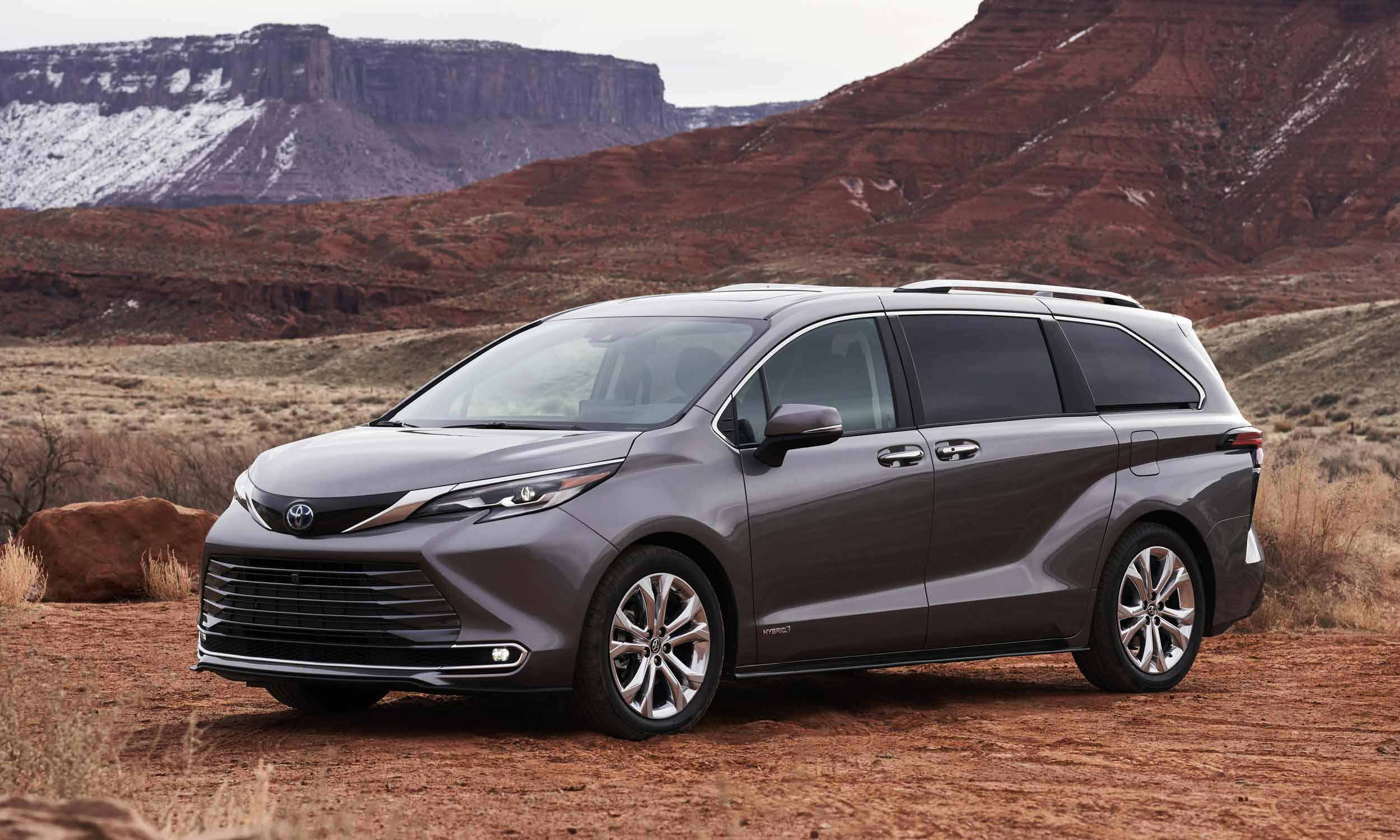 Fresh Look
The new Sienna design is a result of the combined efforts of Toyota’s CALTY design studios in Newport Beach, California, and Ann Arbor, Michigan. The minivan has a sleeker look (if that’s possible in a minivan) with narrow headlights integrated along the upper grille and then wrapping around the front corners of the vehicle, giving the appearance of motion. According to Toyota, the front-end design is inspired by Shinkansen bullet trains in Japan. A lower grille sits below the headlights, evoking similarities to the time-honored and popular Camry passenger car line. This large opening is flanked by two small LED fog lights and adopts different styling depending on trim level. 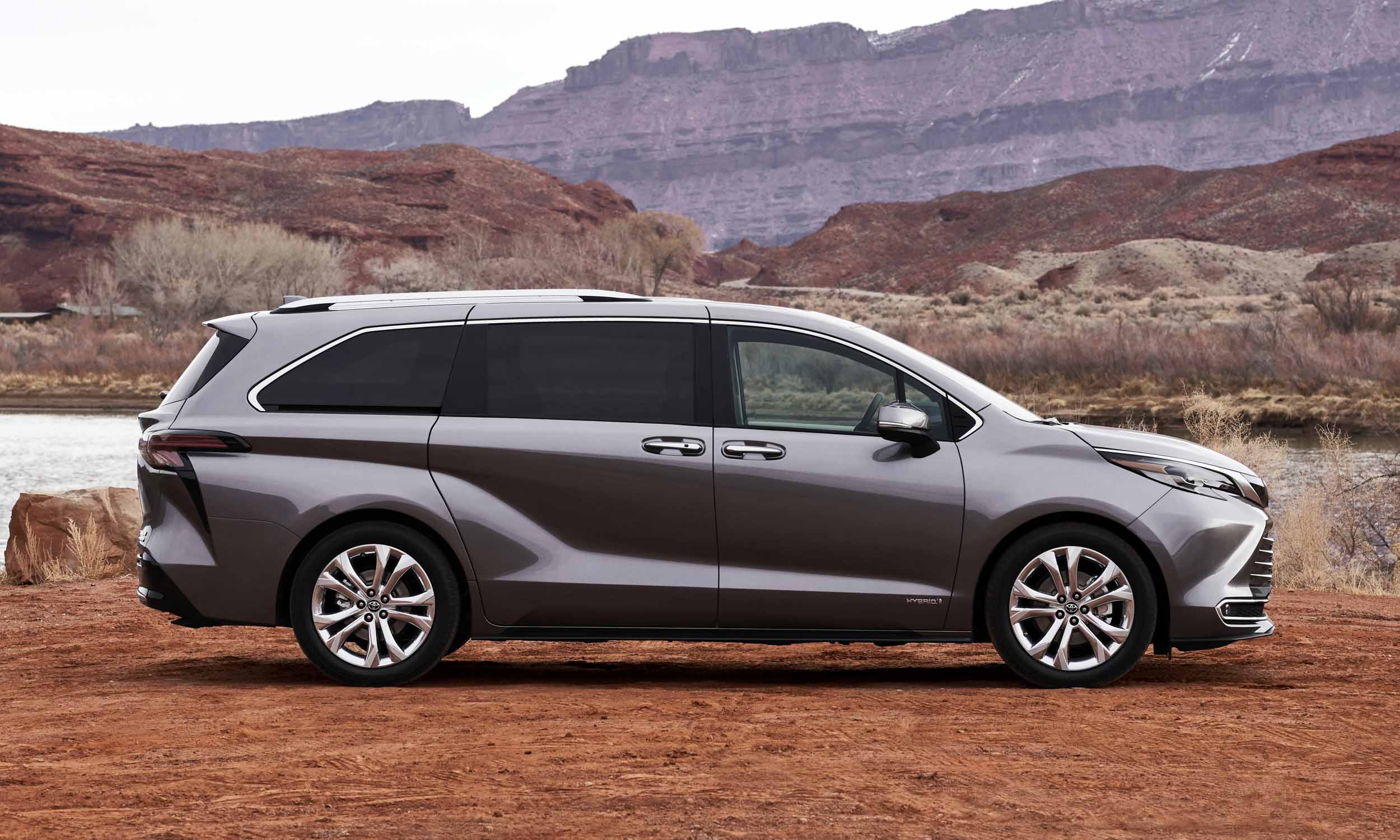 Sculpted Sides
Lines along the side and rear of the new Sienna are much more sculpted than in previous models, giving the new minivan much more character. Character lines flow from the top of the front wheels to the rear with flares around the rear wheels, all intended to summon the appearance of speed. 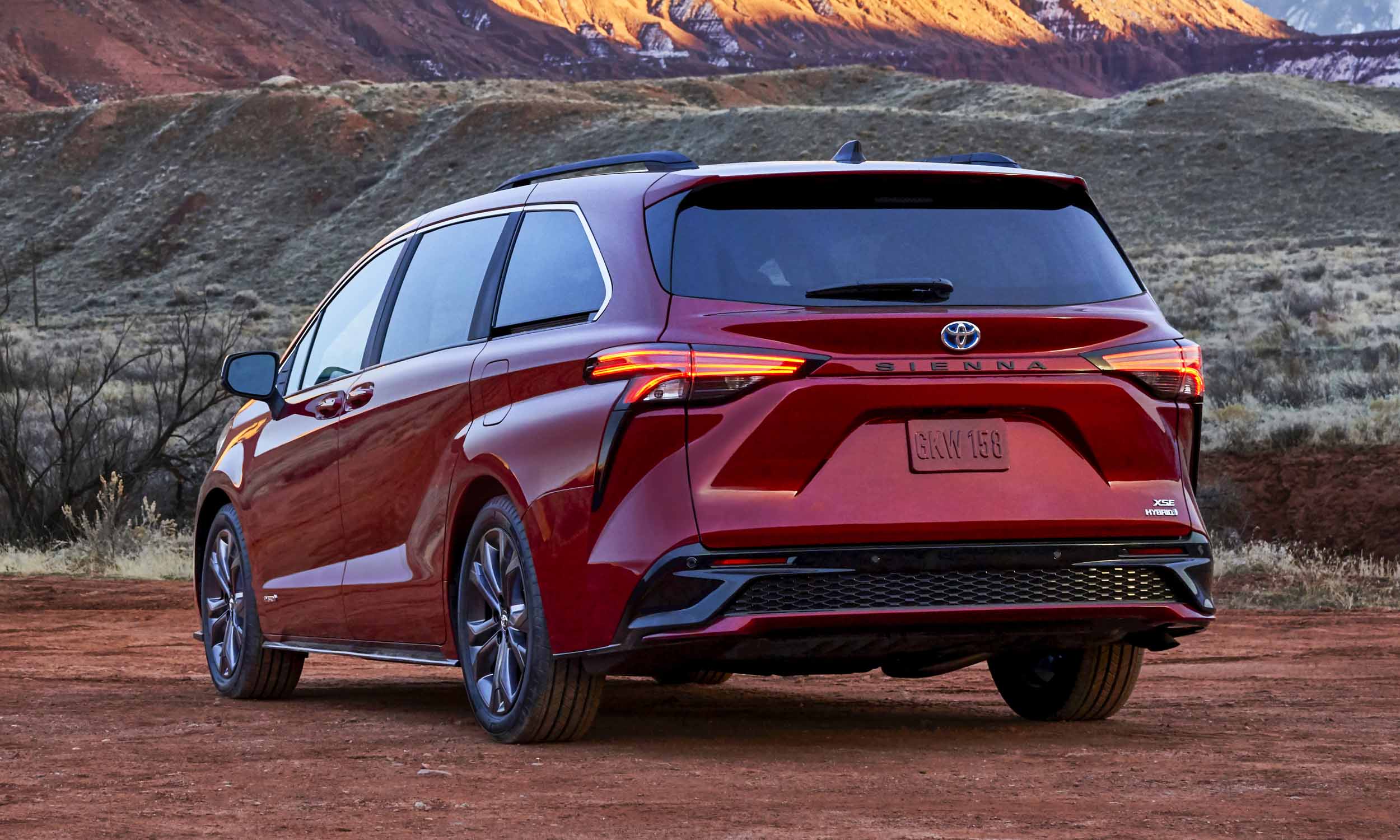 Rear-End Styling
At the rear of the all-new Sienna are LED taillights that add considerable style to rear view, further enhanced by an integrated spoiler and the SIENNA name spelled out in a large font. Toyota badges have blue insets, indicating the hybrid powertrain. 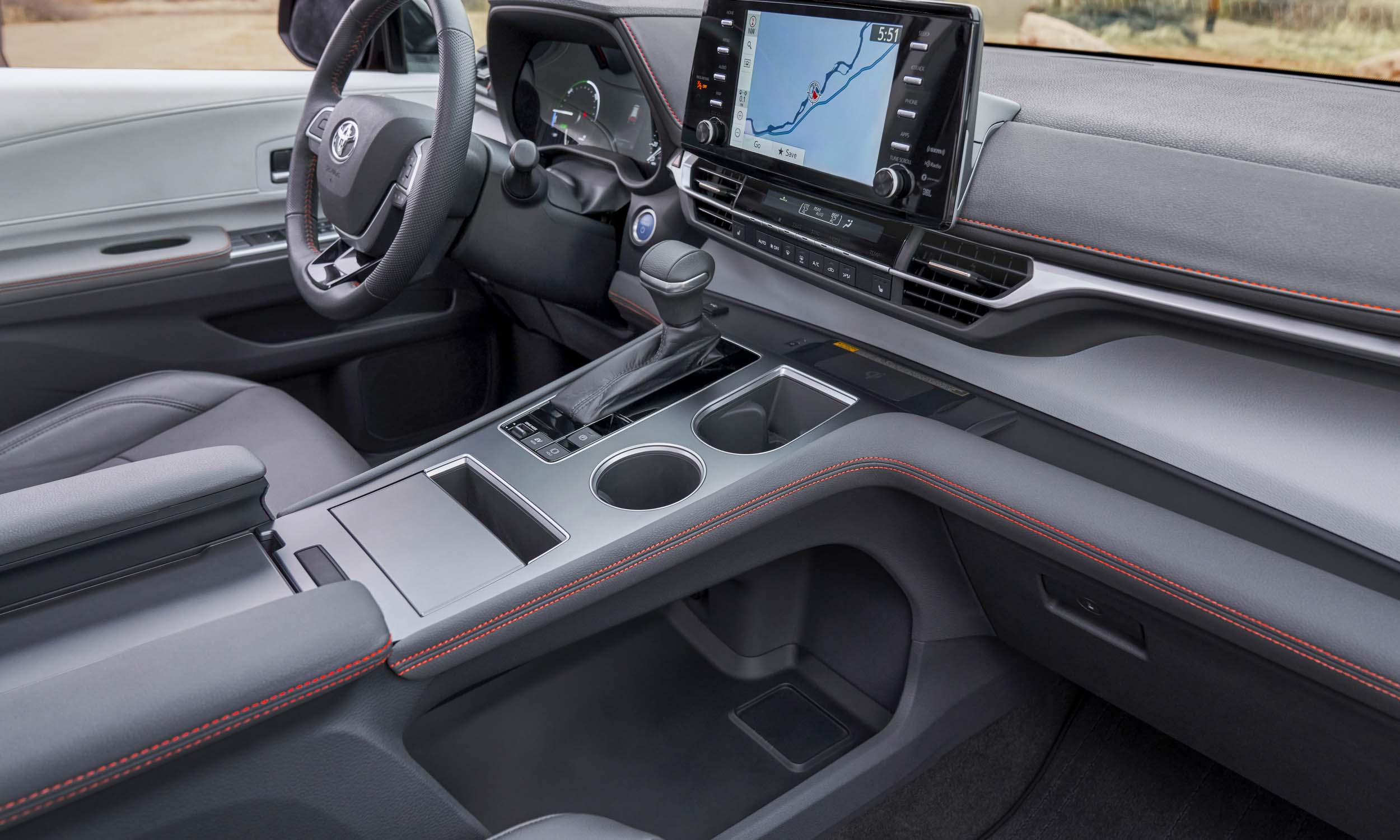 Functional Interior
As stylish as the new Sienna attempts to be, most shoppers don’t buy minivans for their styling — it’s what’s inside that counts. Sienna designers created a “Bridge Console” between the two front seats, providing a great space for storage and device charging. With all covers closed the design is very clean, but the space features a large storage bin, multiple cupholders and a large space below the bridge to stow a purse, bag or other items that need to remain within reach. 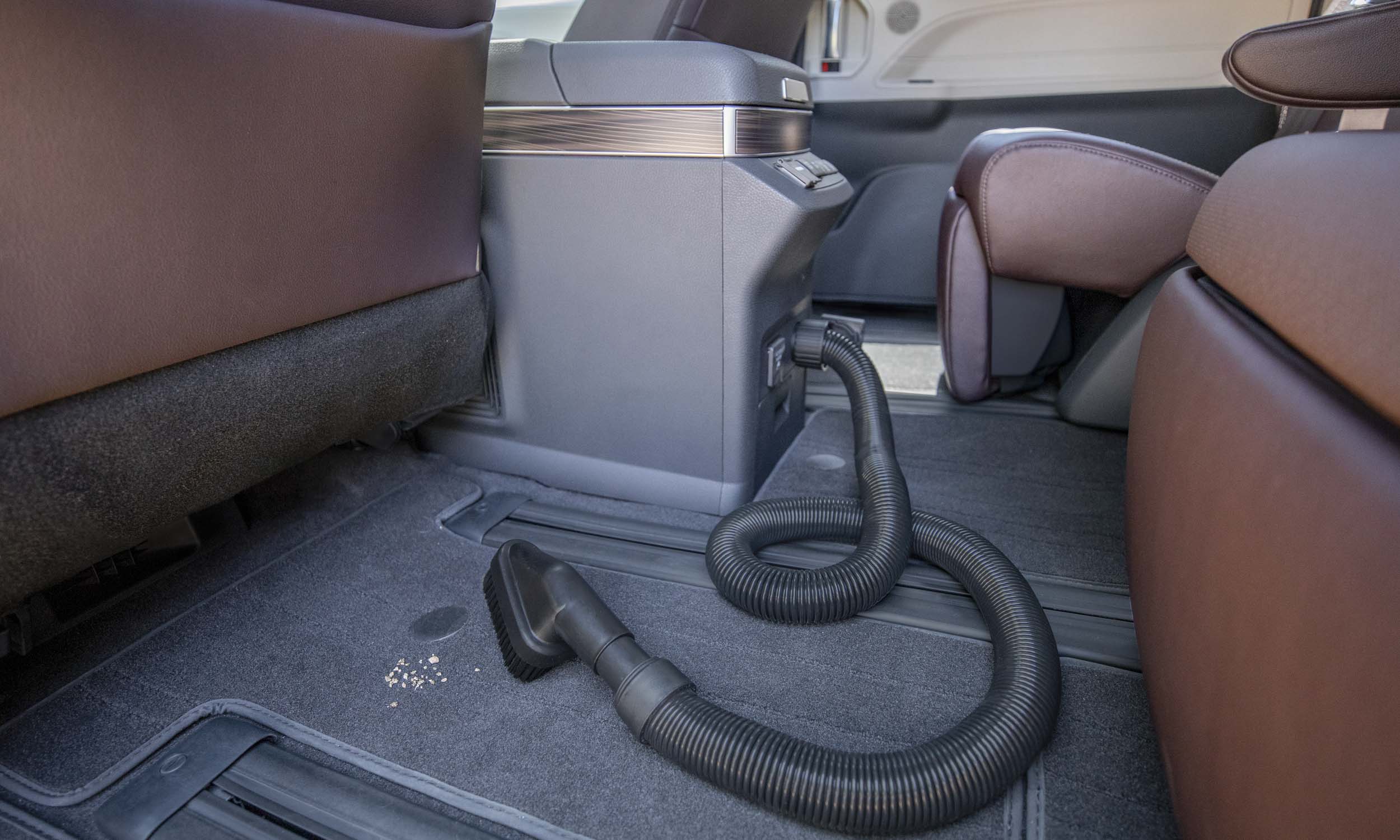 Entertaining and Convenient
The 2021 Toyota Sienna can be loaded with features designed to make everyday use pleasant. Options include an onboard refrigerator, a vacuum cleaner, four-zone climate control, a 1080p HD rear-seat entertainment system and a 1200-watt JBL premium audio system. Passengers will also enjoy the seven USB outlets as well as up to 18 (!) cupholders. 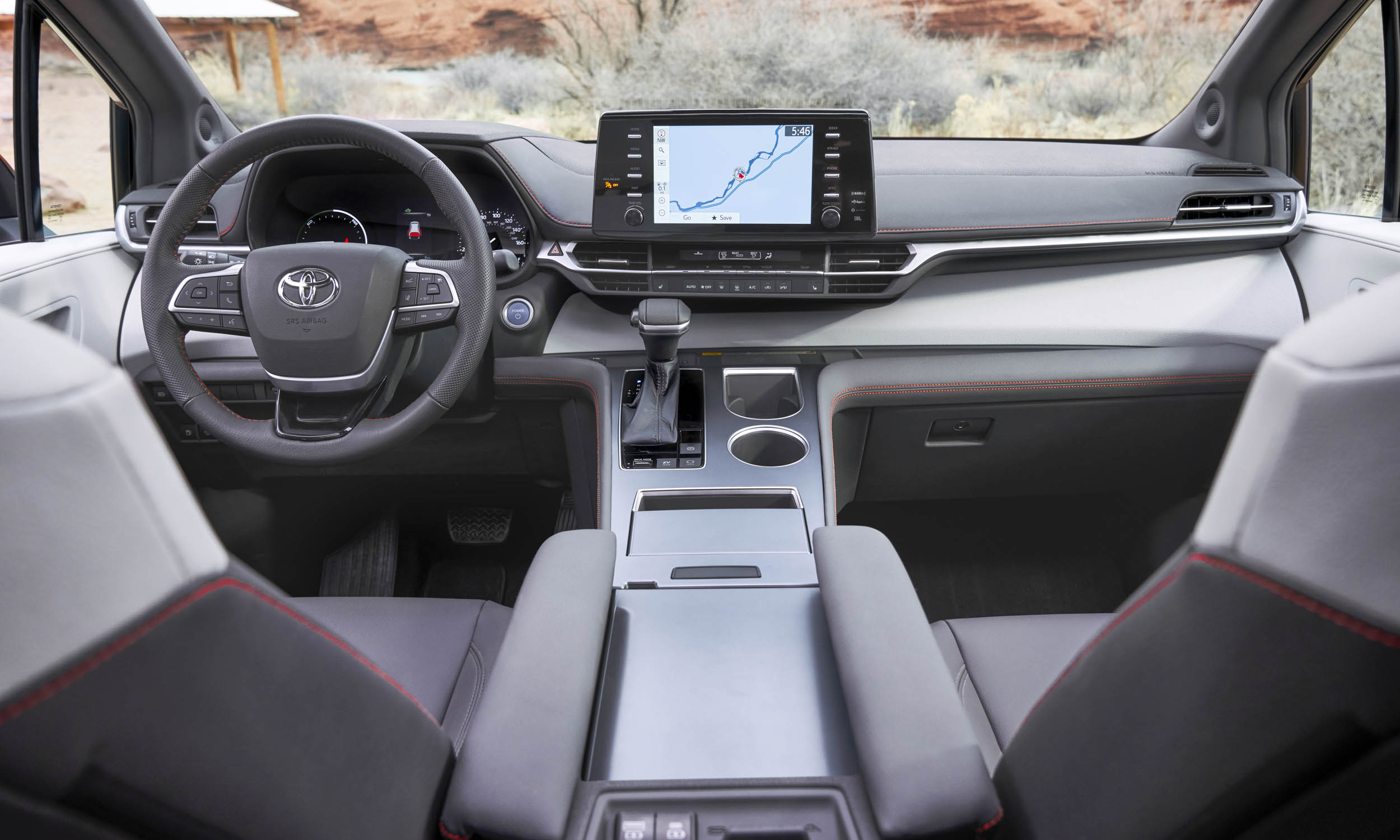 Infotainment
A 9.0-inch touchscreen is standard on all Sienna, as is Bluetooth connectivity, Android Auto, Apple CarPlay and Amazon Alexa compatibility. The 2021 Sienna also has an available Wi-Fi hotspot as well as GPS navigation. 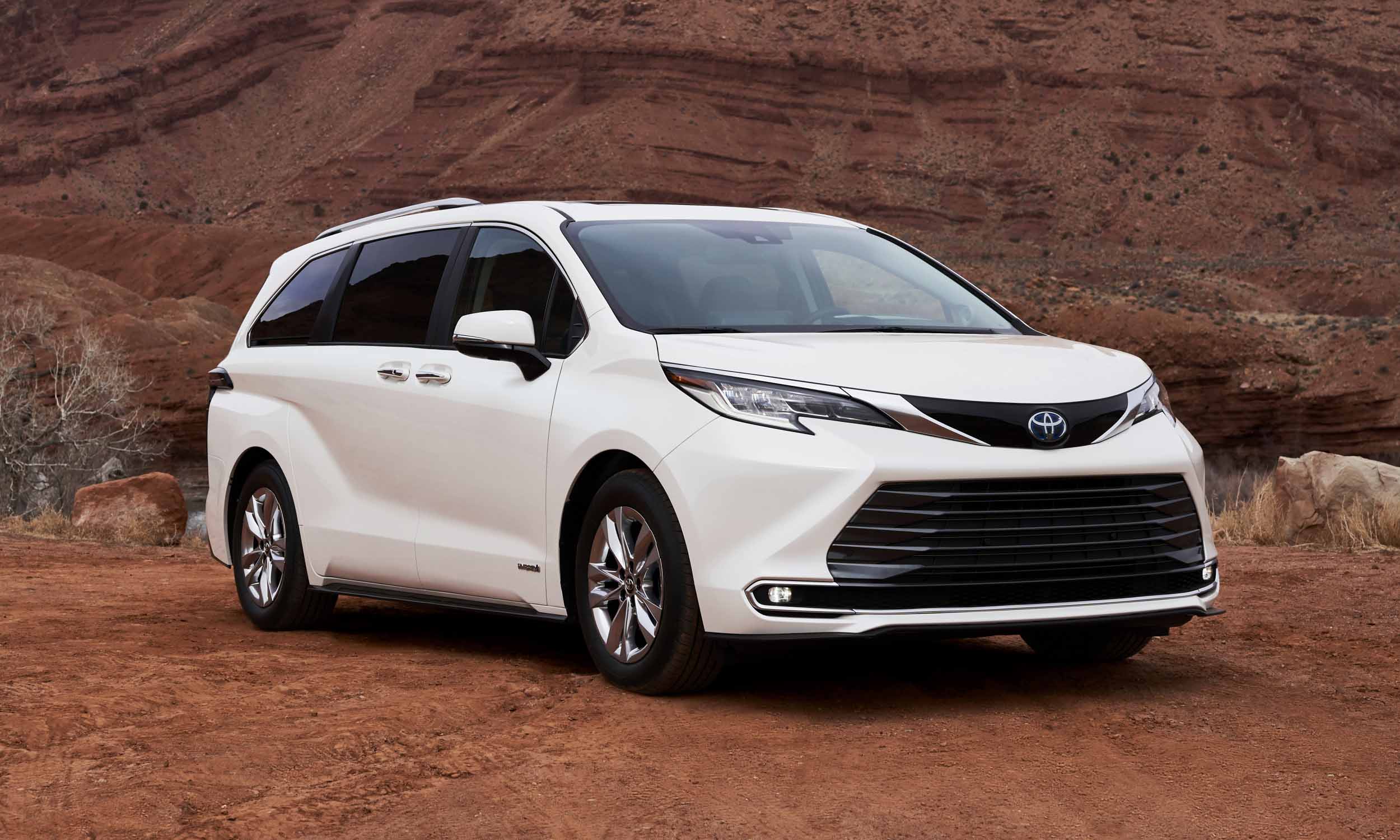 Easy Access
Both side sliding doors and the tailgate can be opened via the remote or more conveniently by swiping a foot in close proximity to the bottom of the door. 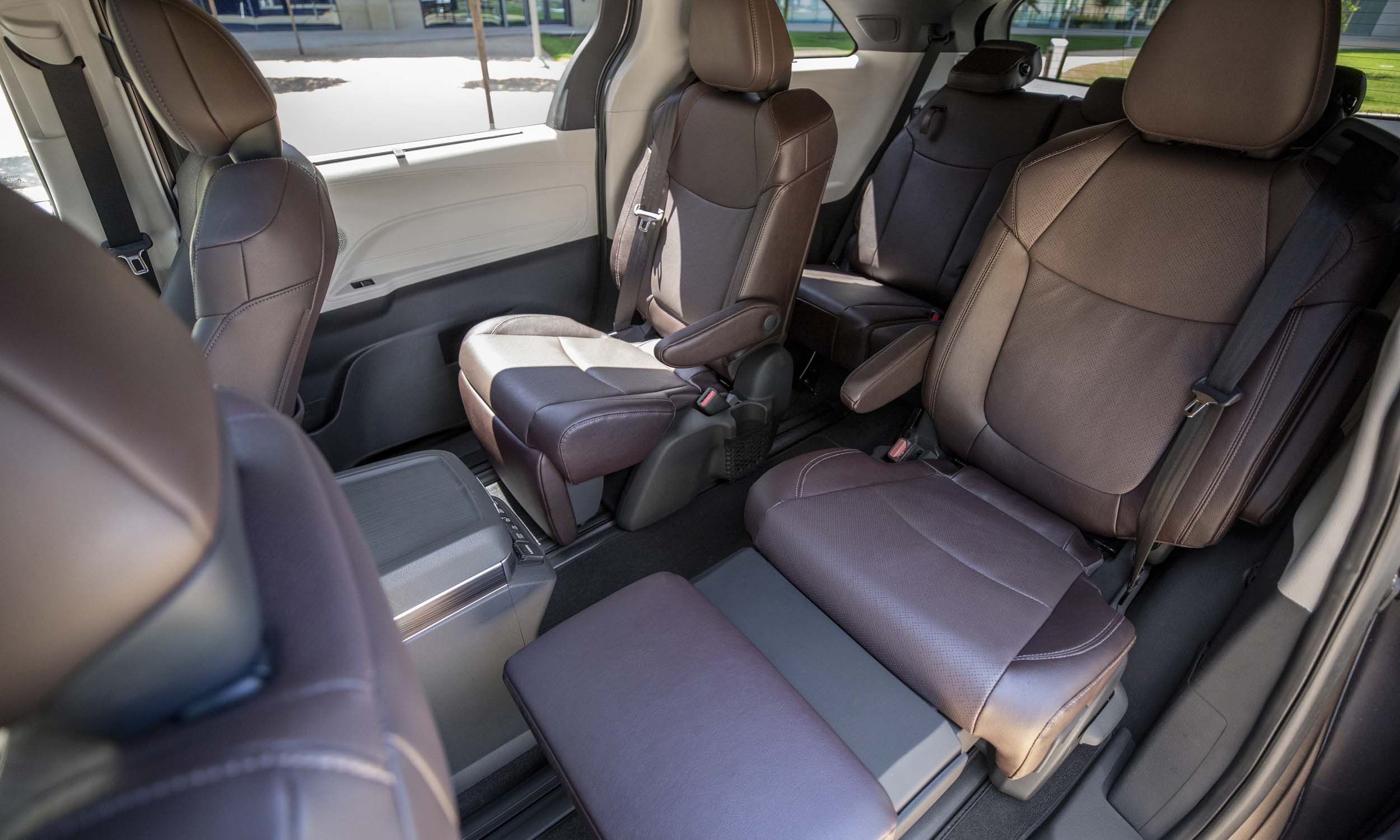 Versatile Seating
Super Long Slide second-row captain’s chairs are available on higher-level trims of the 2021 Toyota Sienna. These captain’s chairs slide back 25 inches to provide limousinelike legroom, and are even available with an ottoman. Alternatively, the new Sienna can be configured with a stowable middle seat in the second row to accommodate up to eight occupants. 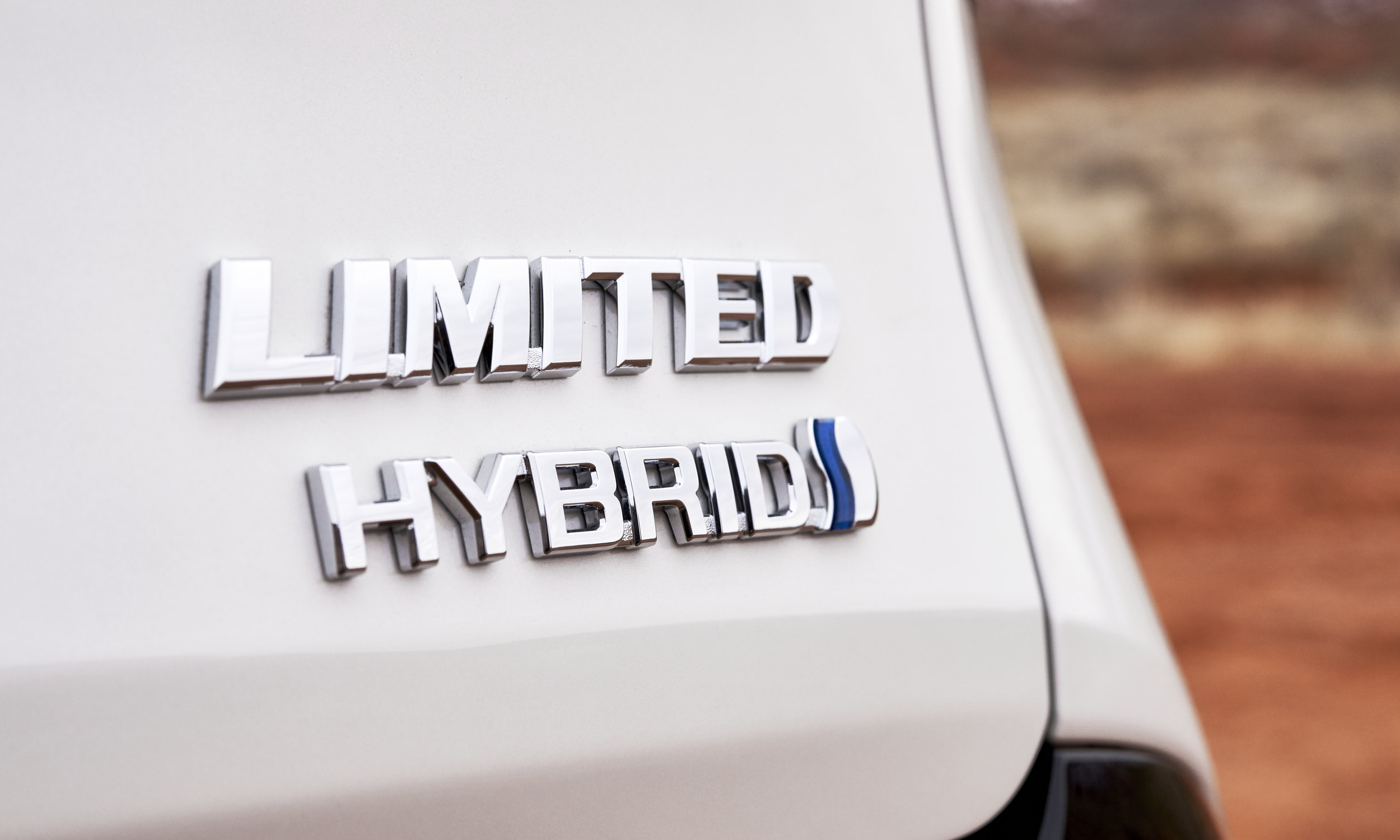 Hybrid Powertrain
The only available powertrain for the 2021 Toyota Sienna is the Toyota Hybrid System II that teams a high-efficiency 2.5-liter 4-cylinder engine with two electric motors for a total output of 243 horsepower. This is not a plug-in hybrid system, so pure EV mode will only be available for short distances at low speeds. Toyota estimates 33 mpg combined for this new hybrid minivan. The Sienna will be able to tow up to 3,500 pounds. 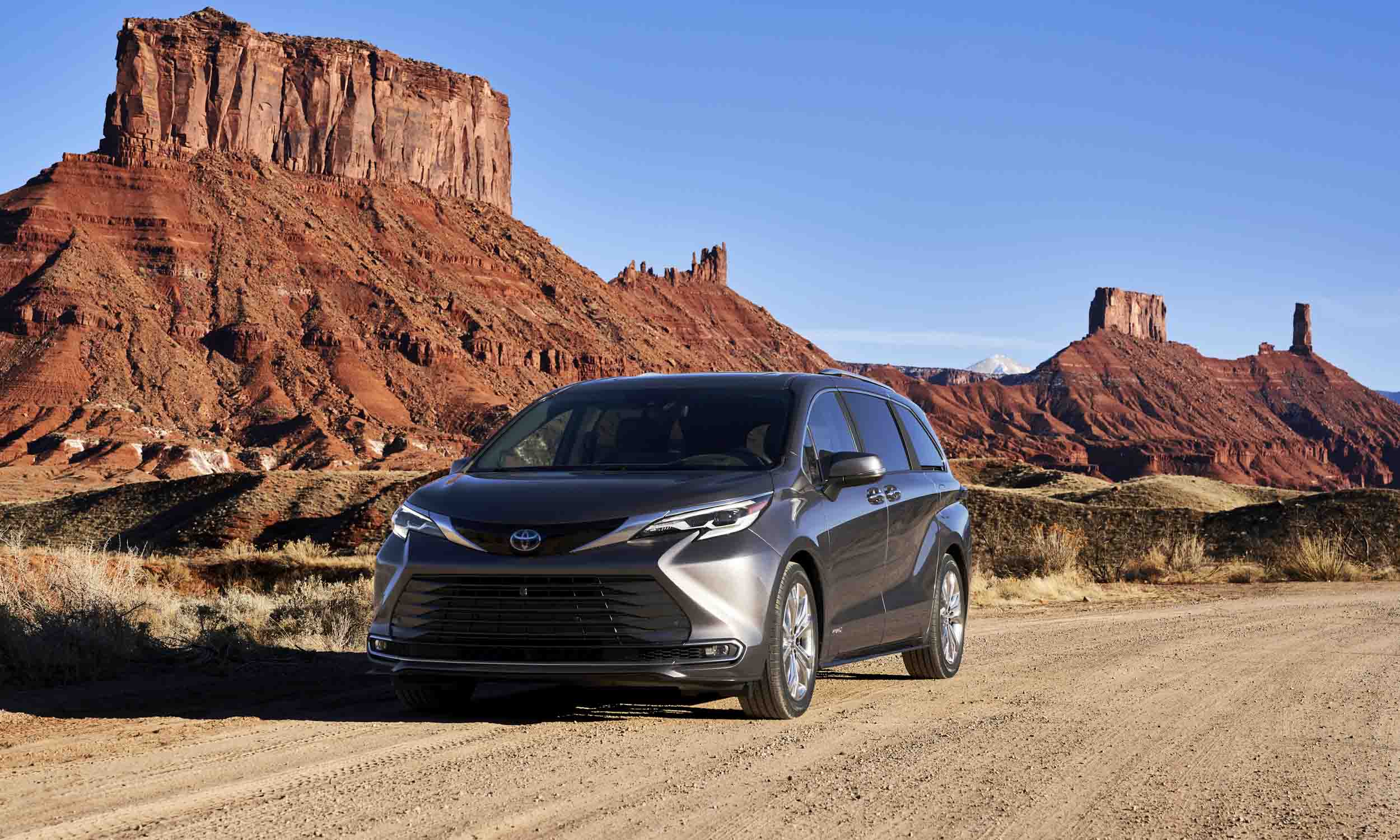 All-Wheel Drive
Until recently, the Toyota Sienna has been the only minivan offered with all-wheel drive (Chrysler adds AWD to the non-hybrid Pacifica this year) and this will continue for 2021. Thus Sienna will be the only hybrid minivan on the market offering all-wheel drive. Unlike a traditional all-wheel-drive system, the Sienna AWD utilizes a separate electric motor at the rear wheels to provide additional traction at any speed. For better off-the-line performance, the all-wheel-drive system will send up to 80-percent of driving power to the rear wheels to avoid any front wheelslip. 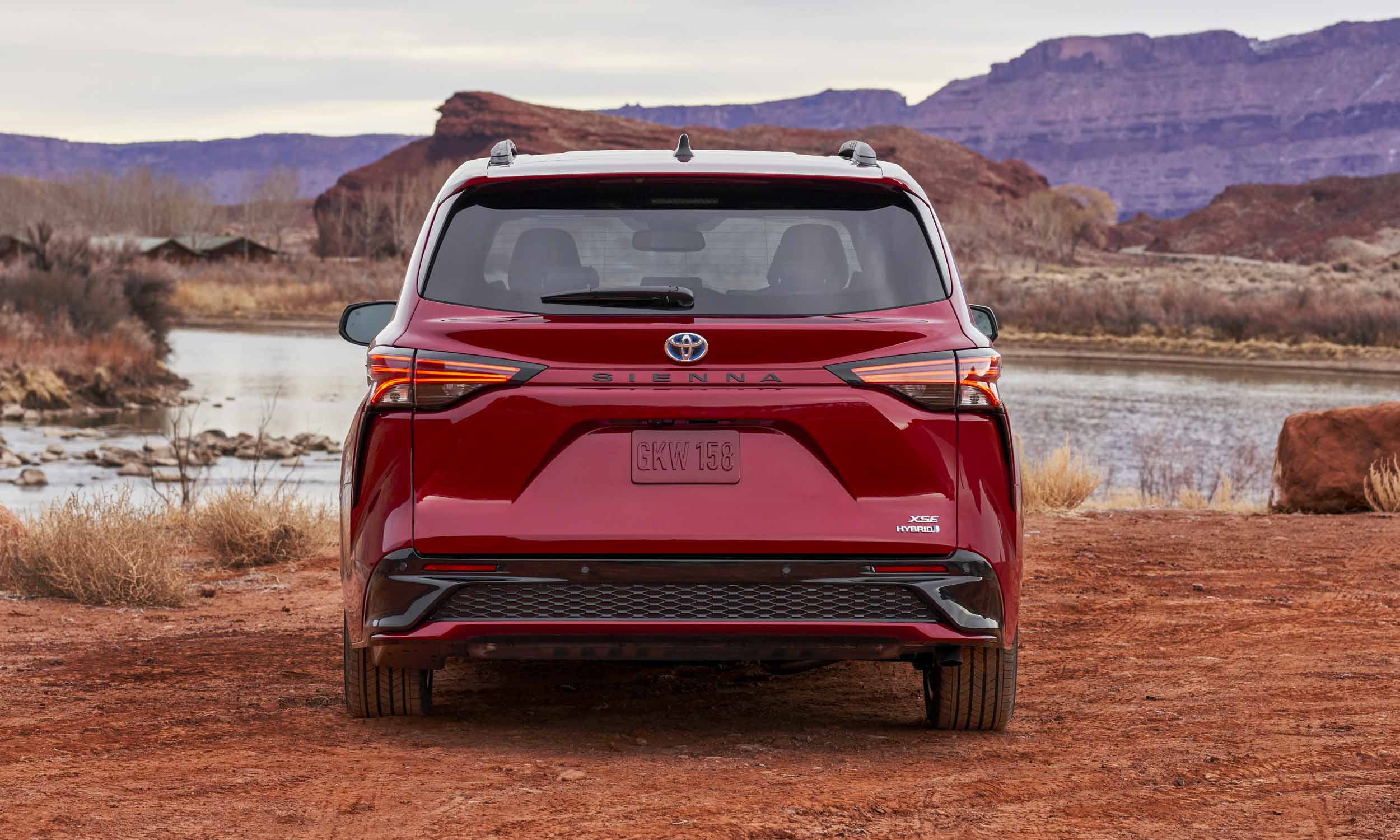 Safety First
Toyota will equip all new Siennas with Toyota Safety Sense 2.0, which includes a pre-collision system with pedestrian detection, full-speed-range adaptive cruise control, lane departure alert with steering assist, a blind-spot monitor, rear cross-traffic alert, road sign assist and automatic high-beam headlights. A backup camera is also standard, and Sienna will be available with a digital rearview mirror — a handy feature when the driver’s view aft happens to be blocked by cargo or people. 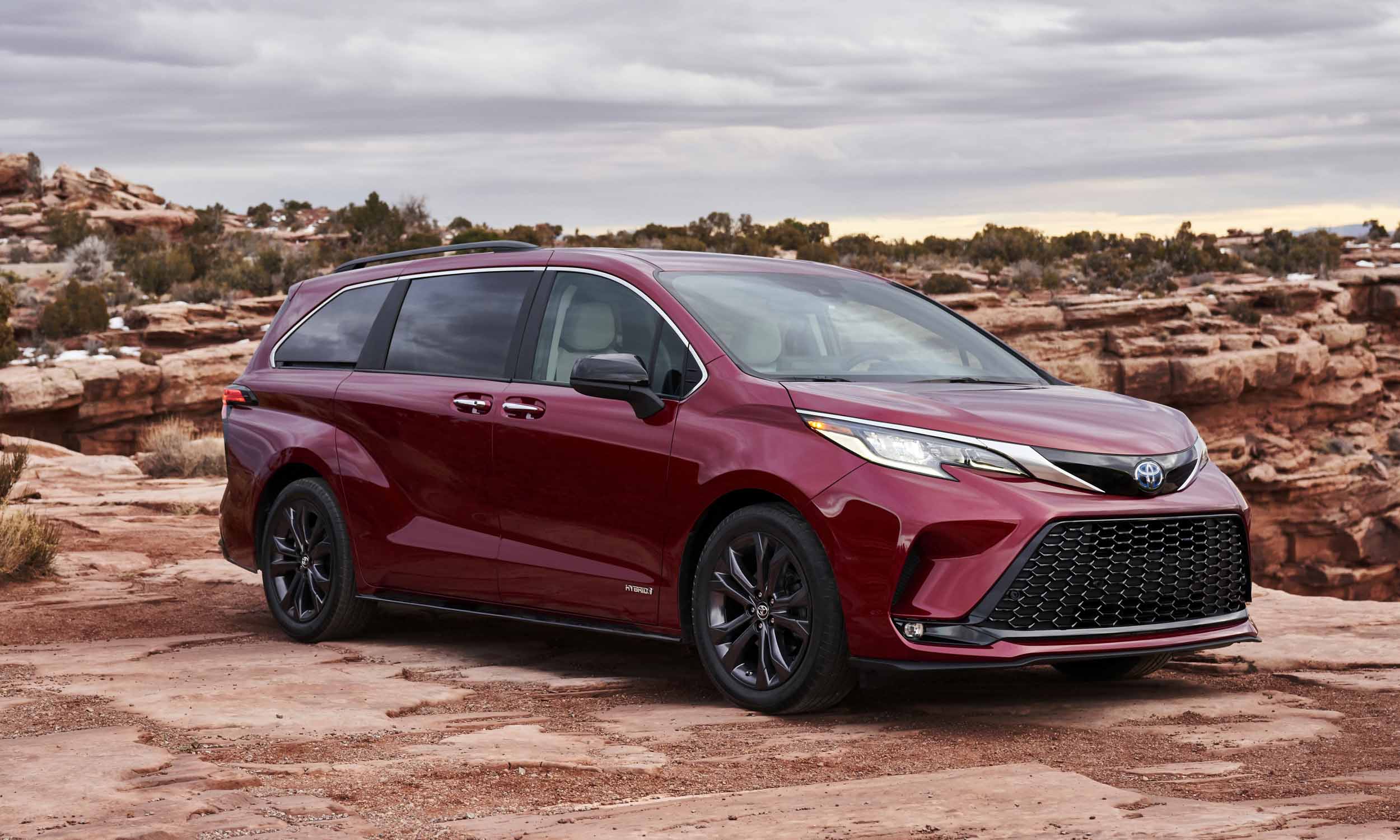 Sporty and Luxurious
The 2021 Toyota Sienna will be available in a range of trim levels, starting with the base LE and topping out with the sporty XSE or luxurious Platinum. The XSE has a unique grille, 20-inch split 5-spoke wheels and sportier front and rear bumpers, while the Platinum also gets its own 20-inch wheels as well as a 10.0-inch color head-up display. 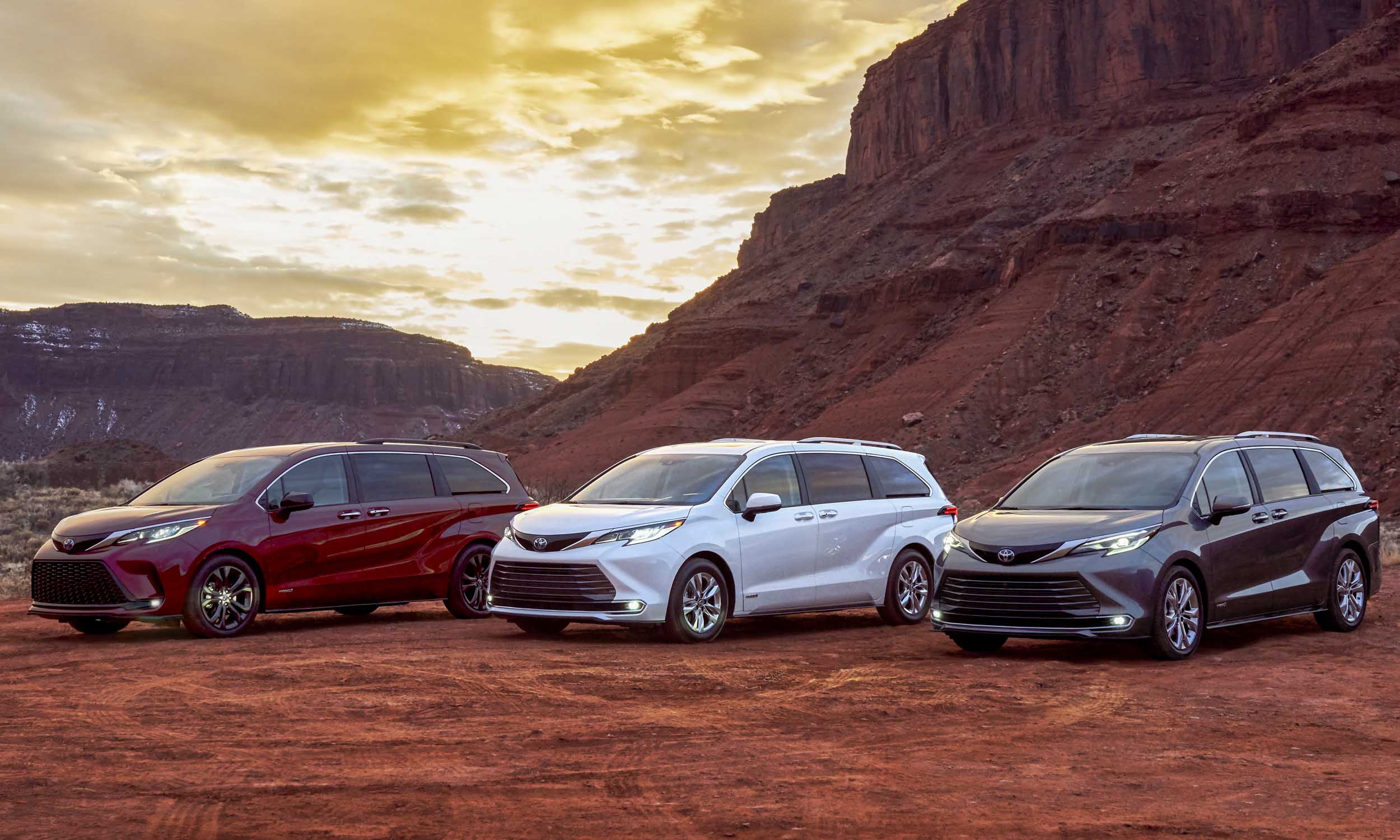 Coming Soon
The new Sienna will arrive later this year. Pricing will be released closer to the on-sale date.