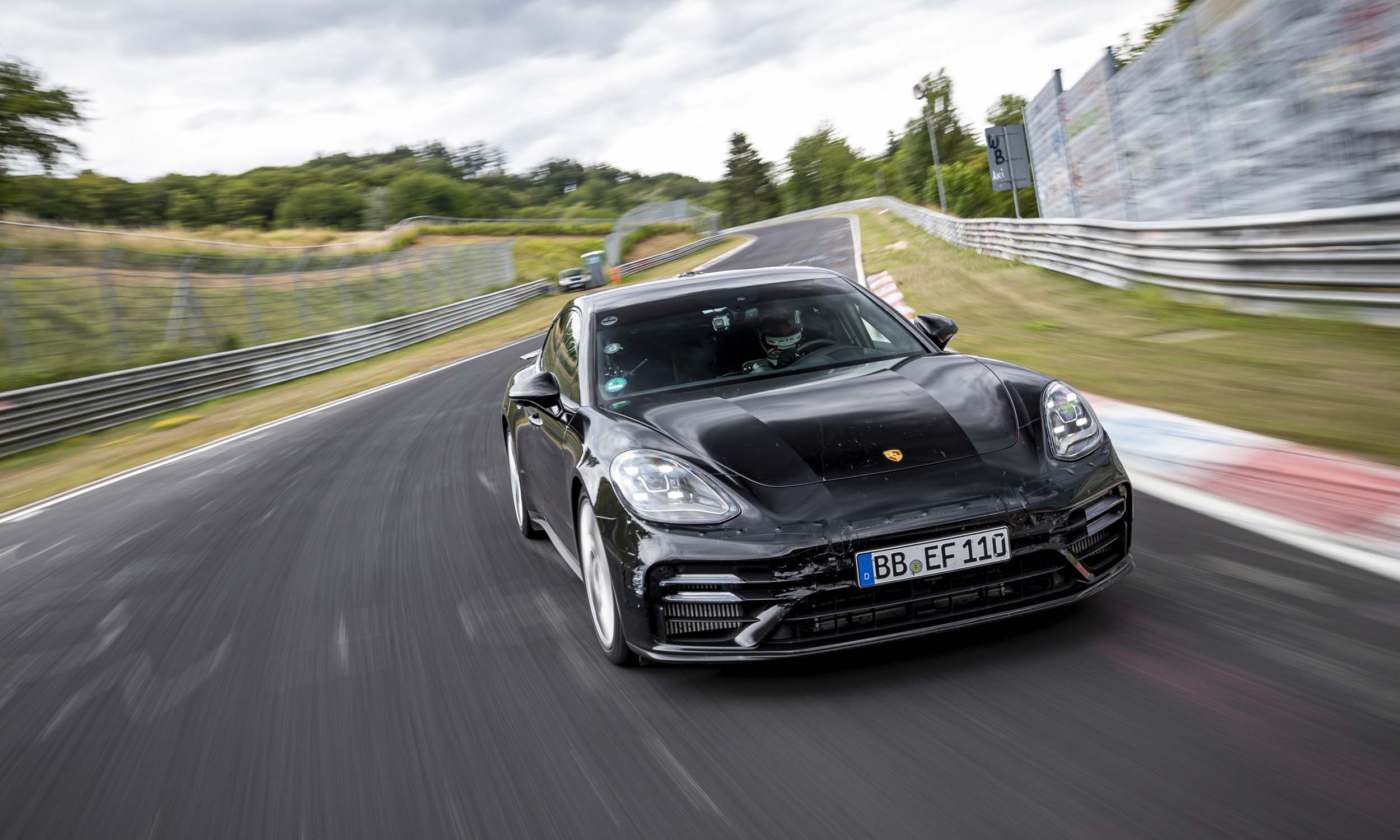 Record Breaker
The all-new 2021 Porsche Panamera hasn’t premiered yet and it’s already breaking records. Expected to have its world debut at the end of August, the lightly-camouflaged 4-door Porsche took to the legendary Nurburgring Nordschleife racetrack in Germany a few weeks ago and it proceeded to circumnavigate the full 20.832 kilometers in 7:29.81, making it the fastest production car in the Executive Car category. Executive Car is a European classification for E-segment vehicles, or those vehicles classified in America as large cars. 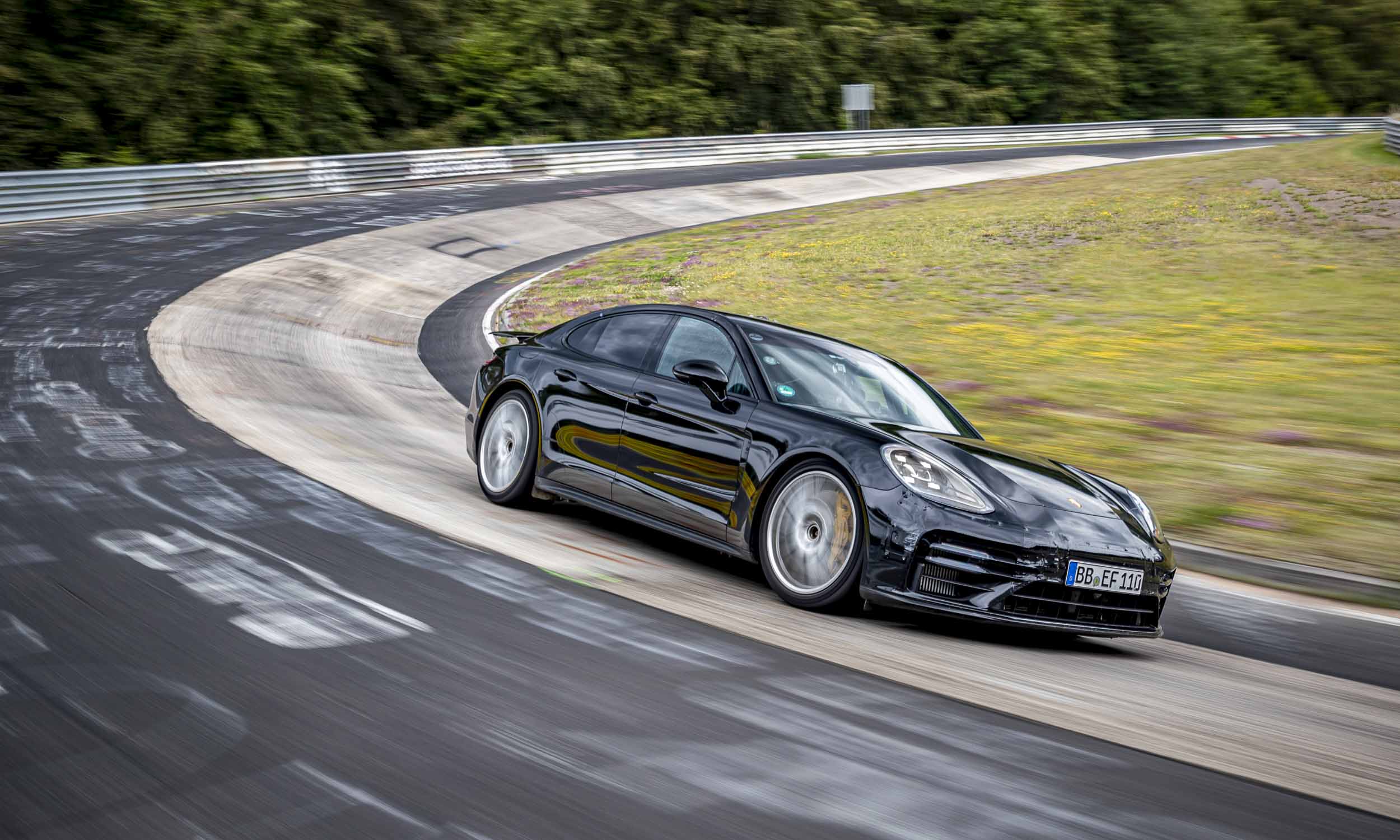 Executive Cars
So what models does the Panamera compete against in the Executive Car category? Executive Cars are defined by the Kraftfahrt-Bundesamt, the federal transport authority in Germany, and the categorization is used for differentiation by the Nurburgring. Executive Cars are also referred to as Upper Class cars, which includes vehicles such as the Mercedes-Benz S-Class, BMW 7 Series, Audi A8 and, of course, the Porsche Panamera. The Panamera’s lap time also makes it the fastest production car with four doors and four seats. 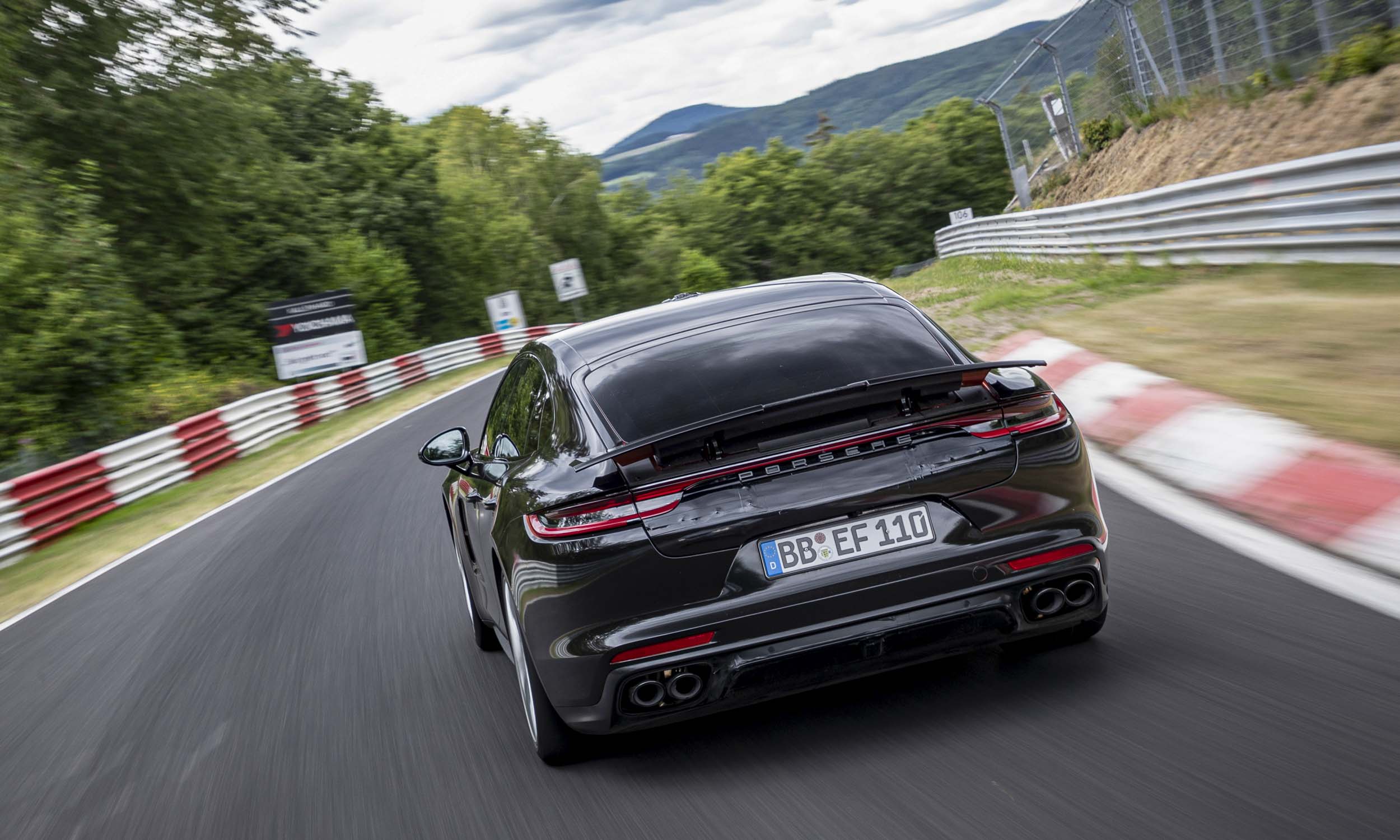 True Sports Car
“The Panamera has always been both an exclusive touring sedan and a true sports car at the same time. In the new model, we have enhanced these attributes even further,” said Thomas Friemuth, vice president of the Panamera product line. “Alongside the increased engine power, improvements have been made in the areas of cornering stability, body control and steering precision. These enhancements benefit both everyday comfort and performance. The lap record is impressive proof of this,” Friemuth noted. 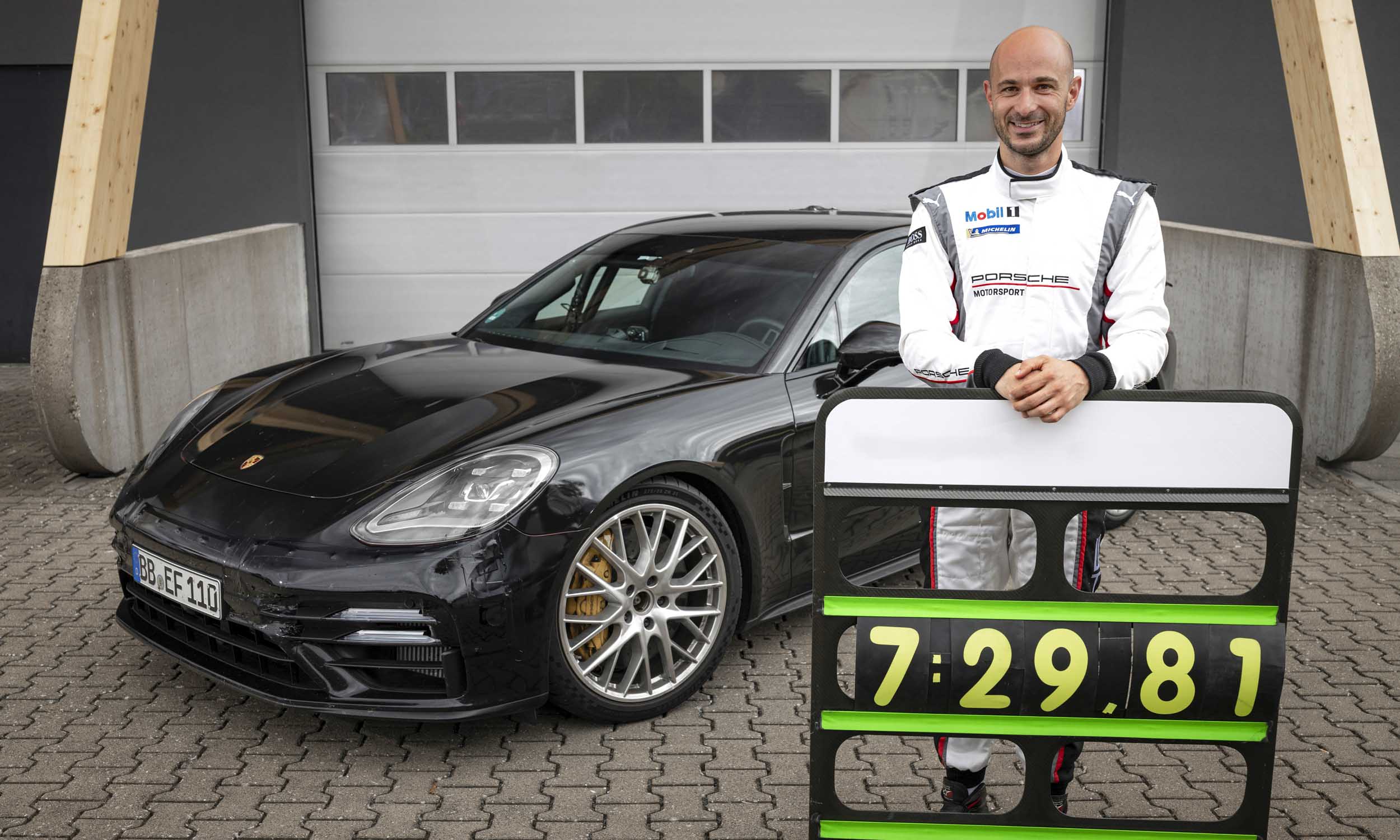 Virtually Stock
Test driver Lars Kern piloted the 2021 Porsche Panamera around the famed German circuit for the record-breaking run. The car Kern drove was stock except for a racing seat and safety cage needed for protecting the driver. The Panamera rode on Michelin Pilot Sport Cup 2 tires — designed specifically for Panamera — that will be available as an option when the car goes on sale. 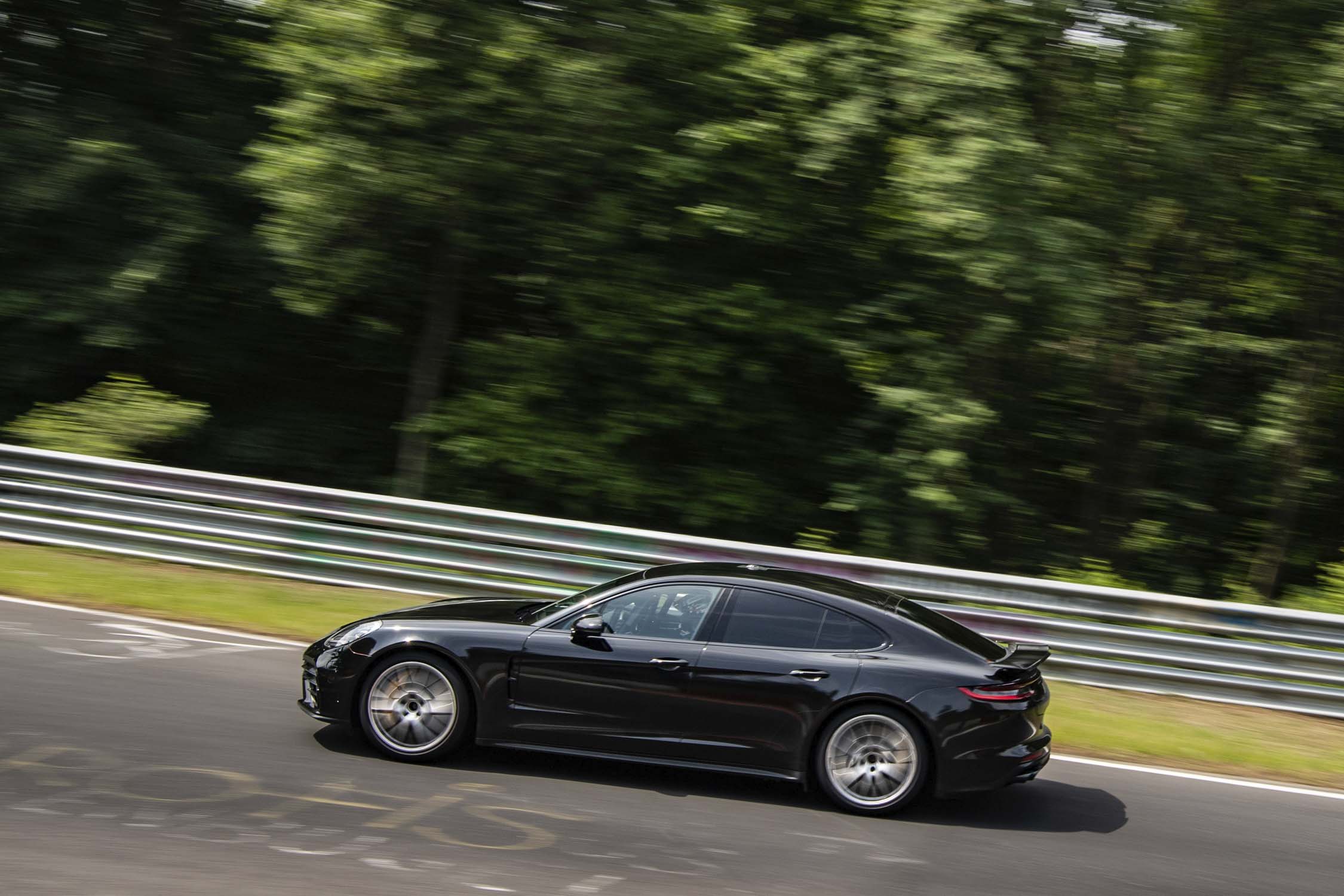 Performance Enhancements
“The enhancements made to the chassis and the powertrain of the new Panamera were always noticeable during this lap on what is recognized as the most demanding race track in the world,” noted Kern in a statement. “In the Hatzenbach or also Bergwerk and Kesselchen sections in particular, the new setup of the electromechanical roll stabilization system PDCC remains consistently effective and provides the Panamera with incredible stability in spite of the bumpy track surface. At the Schwedenkreuz, the car benefited from the improved lateral dynamics and the increased grip of the new Michelin UHP tires. I achieved cornering speeds there that I would not have believed possible with the Panamera,” Kern enthused. 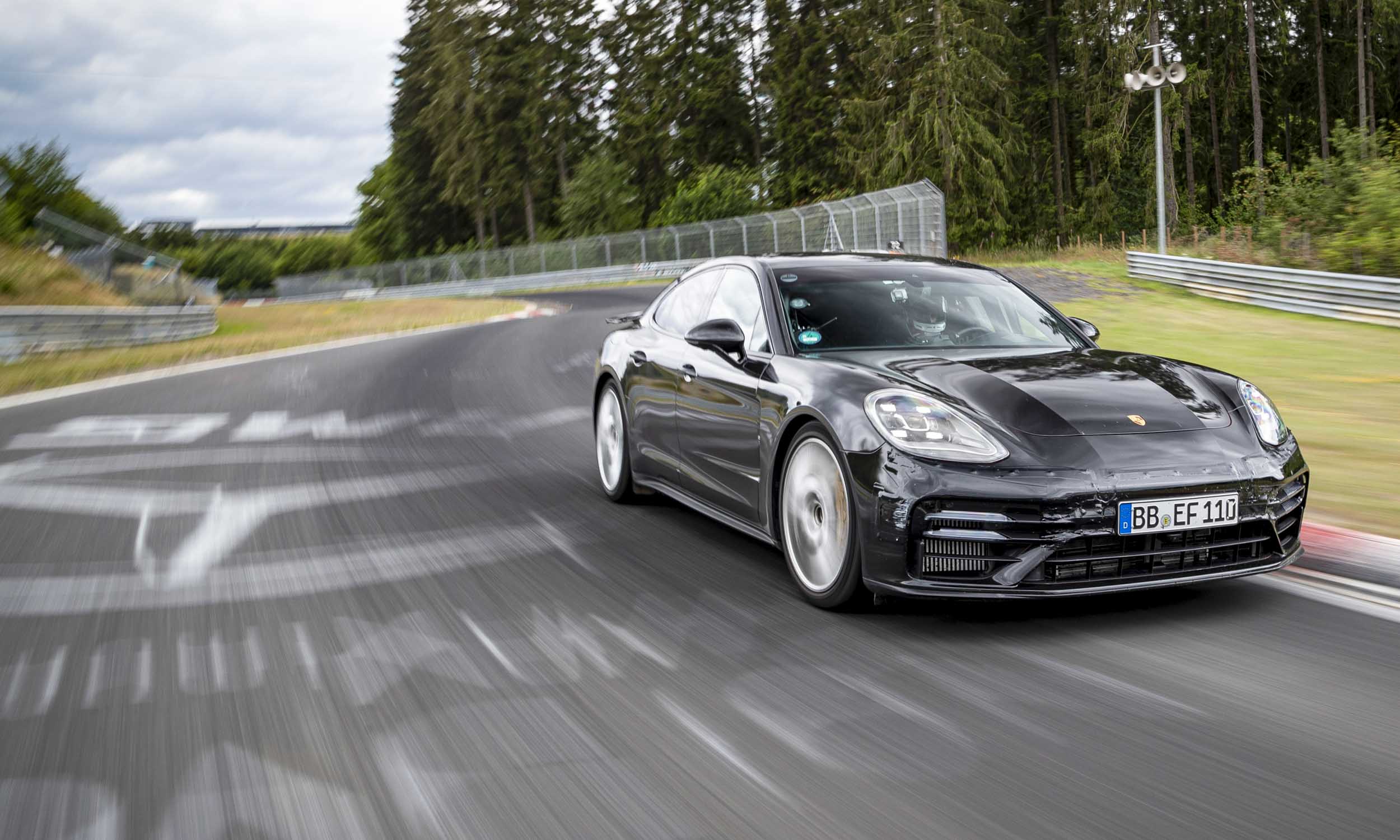 Record Plucked From Mercedes
The new Porsche Panamera’s lap time of 7:29.81 at the Nordschleife edges out the Mercedes-AMG GT 63 S 4-Door that recorded a time of 7:30.11 a few years ago. The times noted are for the full 20.832 kilometers — many enthusiast publications and other OEMs show times for the 20.6 kilometer length, which measures from the start of the staging area to the end, omitting a few hundred meters of track. For comparison, the Panamera completed the 20.6 kilometers in 7:25.04 — about 13 seconds faster than the previous-generation Panamera Turbo and close to the same time achieved by the 2014 Porsche 911 GT3. 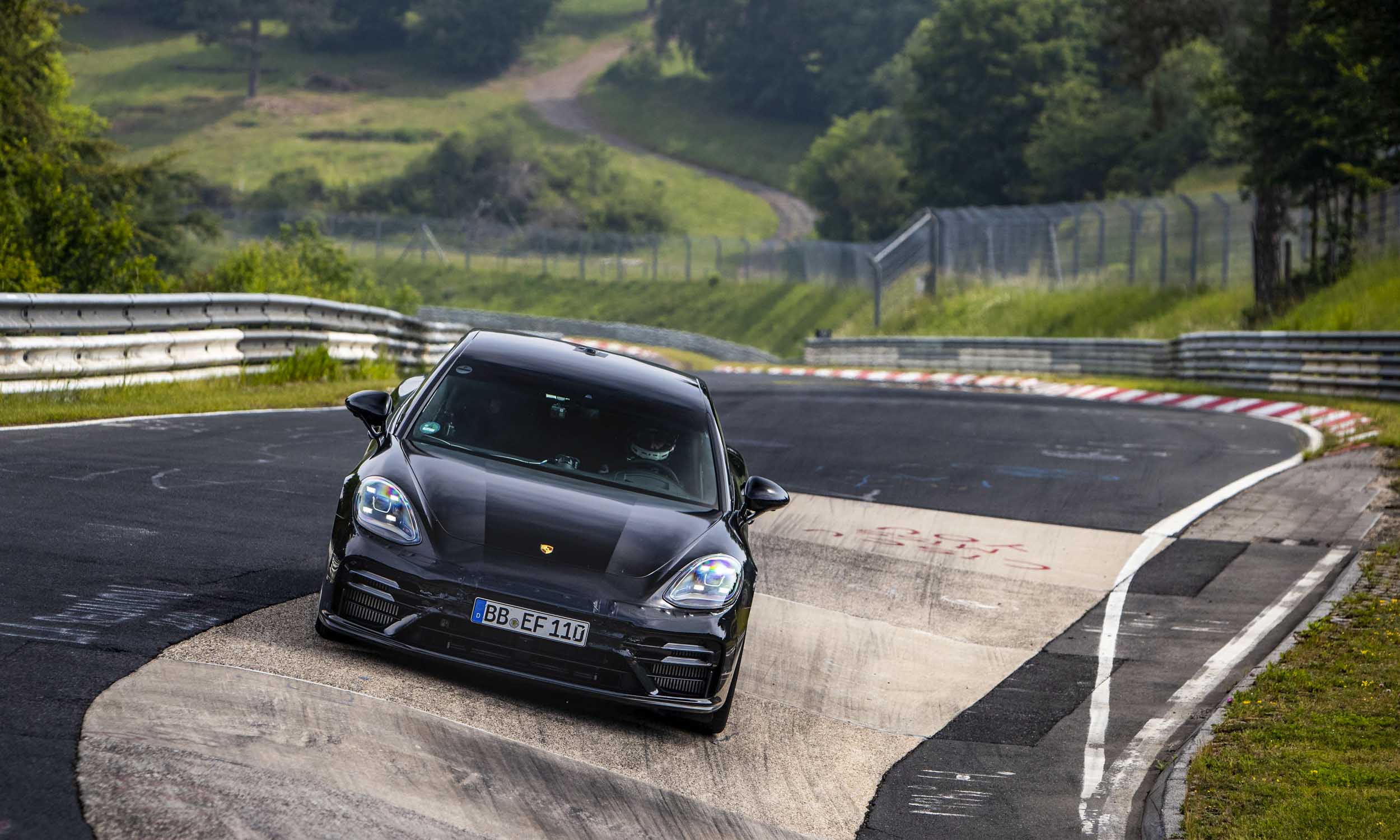 Coming Soon
Porsche has not released details about the updated 2021 Panamera, although rumors have circulated stating that the design changes are evolutionary. The major changes will undoubtedly be under the Panamera’s skin in the form of engine upgrades, including the top-level Turbo S E-Hybrid that is rumored to reach 700 horsepower. Speculation will become fact in a few weeks when Porsche officially introduces the new Panamera. Stay tuned.