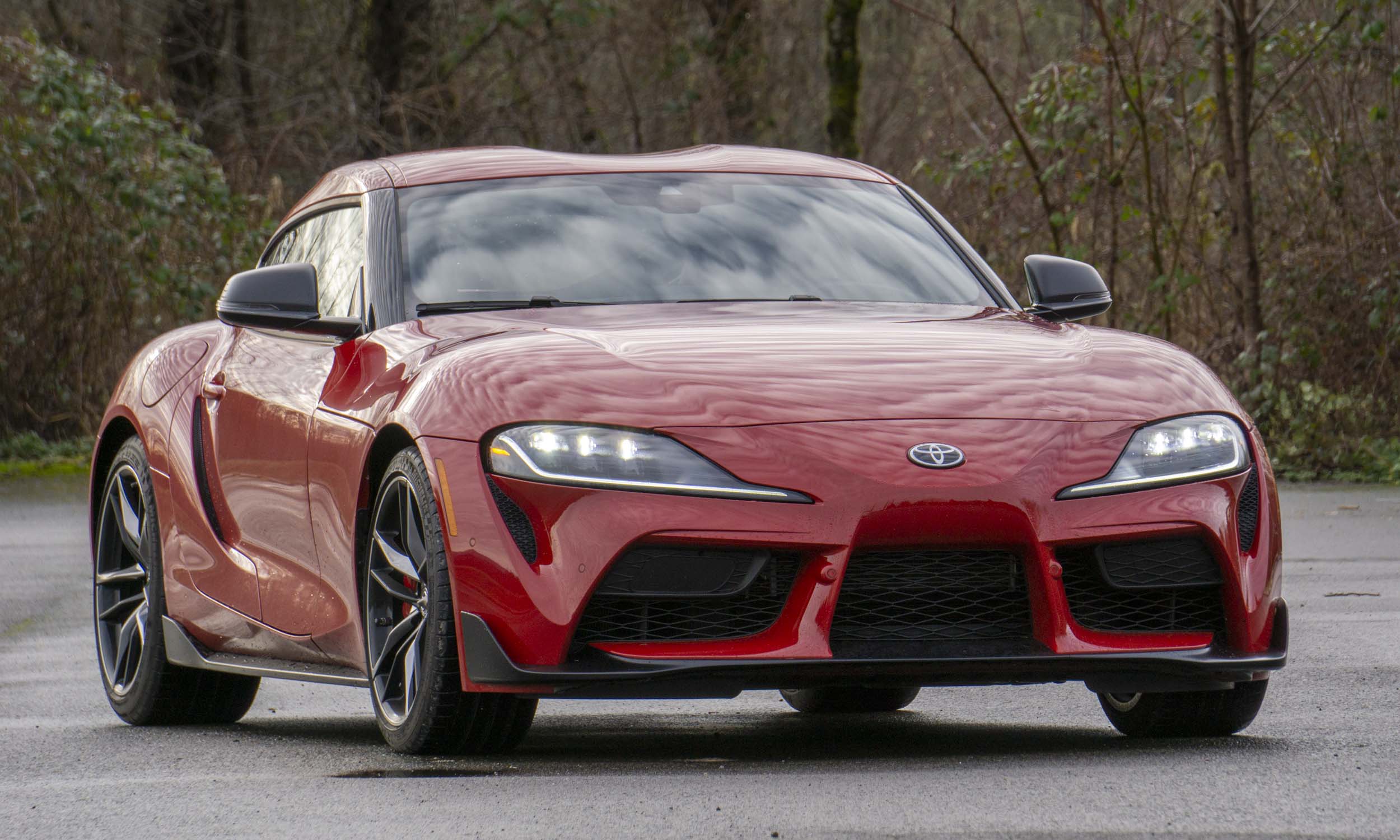 2020 Toyota GR Supra
Too many years have gone by since Toyota’s U.S. lineup featured a dedicated high-performance sports car. Although low-volume, high-horsepower vehicles don’t always make financial sense for a car company, halo cars elevate the brand, provide prestige, renew interest and attract car shoppers into showrooms. In a unique twist on globalization, Toyota worked with BMW — a company that knows a thing or two about performance — and in an atmosphere of cooperation made the numbers work to bring back the legendary Supra name. Like the original, this two-seater is front-engine, rear-wheel drive and an absolute joy to drive. 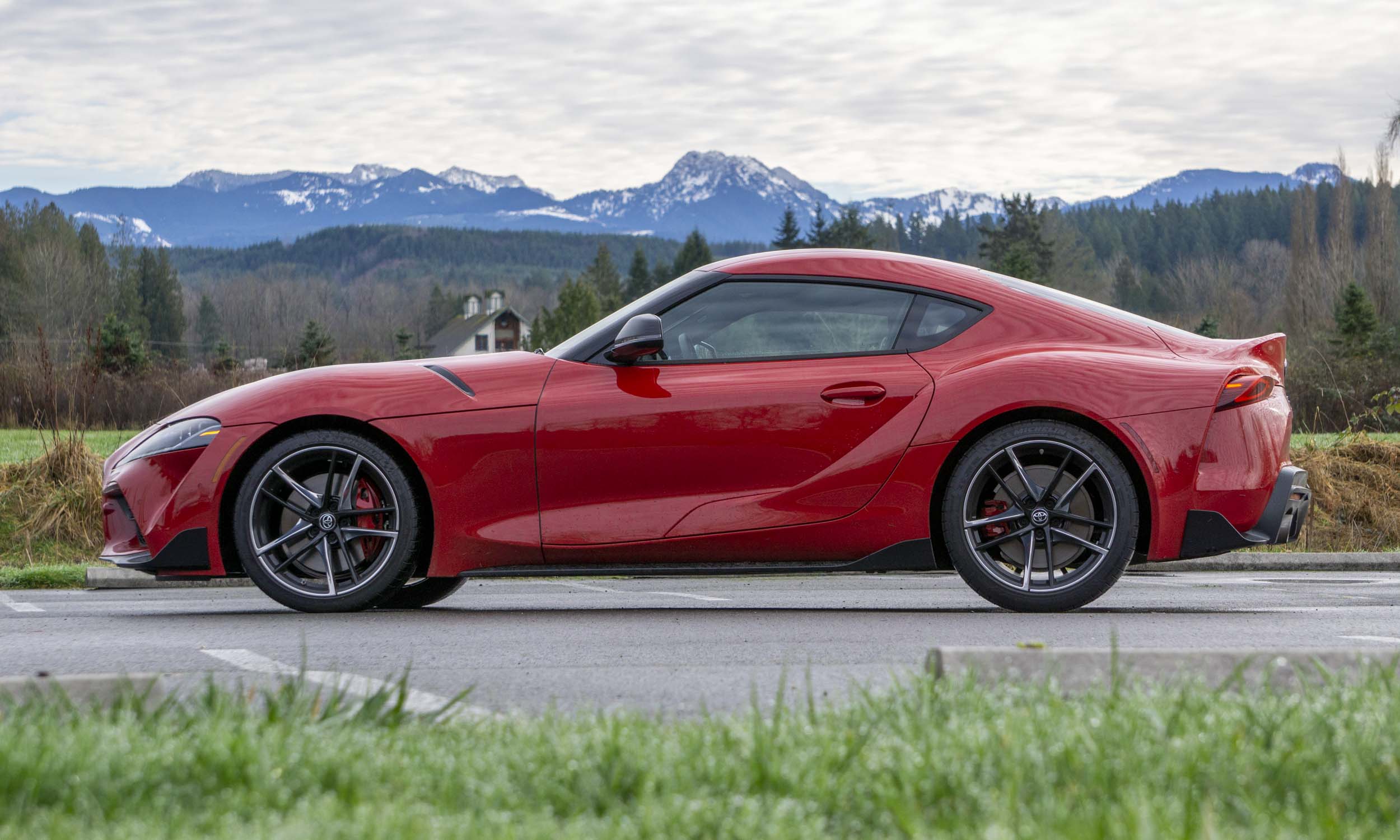 Test Vehicle
For our testing pleasure, Toyota provided a 2020 GR Supra in Renaissance Red with a black leather interior. The only options on the Supra were a Driver Assistance Package and a carpeted cargo mat for a total MSRP of $56,195. Competitors to the new GR Supra include the Nissan 370Z, BMW Z4, Alfa Romeo 4C and Porsche Cayman. 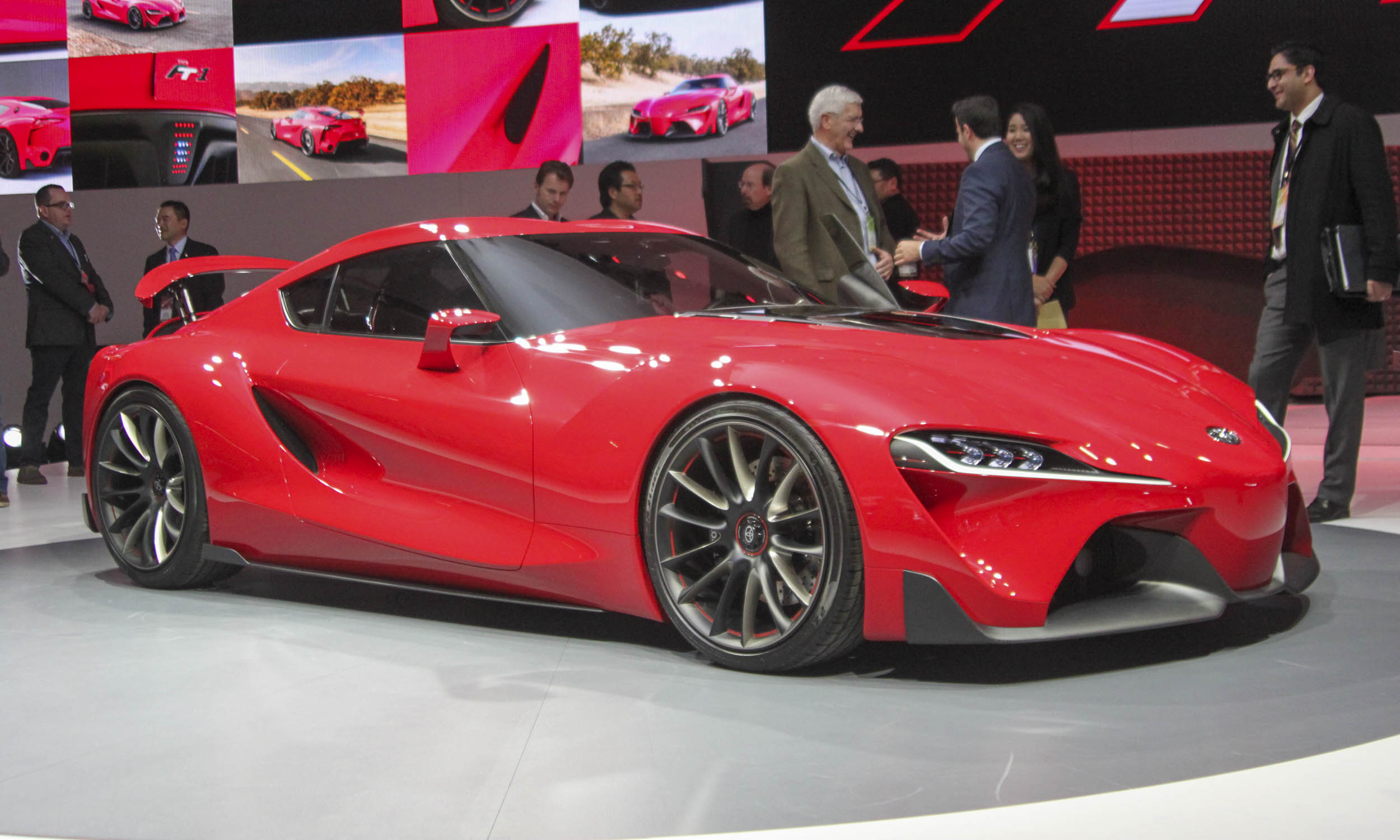 Like the Concept
Almost exactly five years ago, Toyota unveiled the all-new GR Supra at the 2014 Detroit Auto Show, revealing a concept vehicle called the FT-1. Although the car community anxiously speculated that this sexy concept would become the next Supra, it remained a rumor with no confirmation. As it turned out, the 2020 GR Supra looks remarkably like the original concept from 2014. 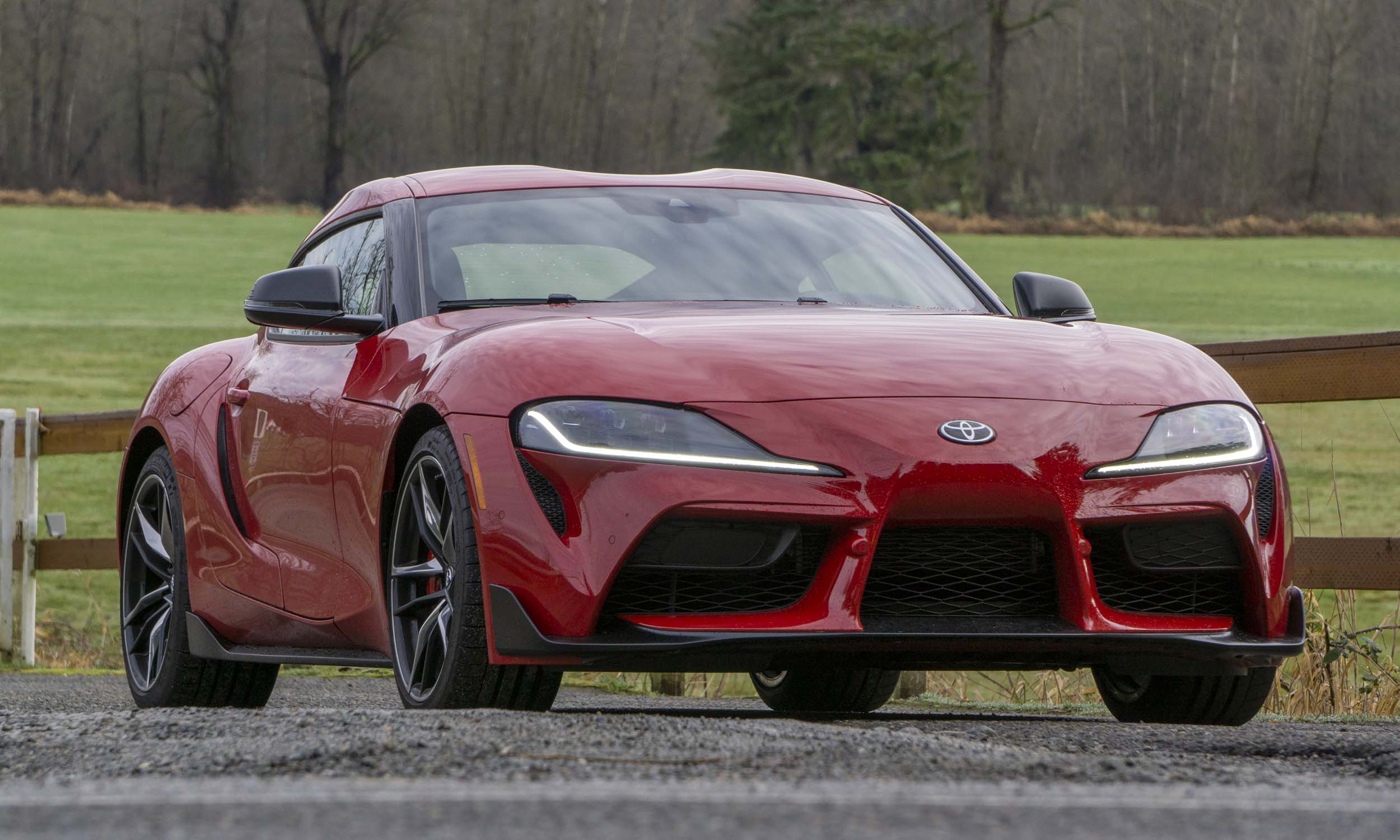 Curvy Styling
The GR Supra’s exterior styling is unique and curvy with no hard edges. Headlights stretch almost to the midline of the hood, enhanced by signature LED running lights and body panels that wrap around at the edges for a low, wide stance. Further enhancements include subtle sculpting on the hood and lower air intakes. 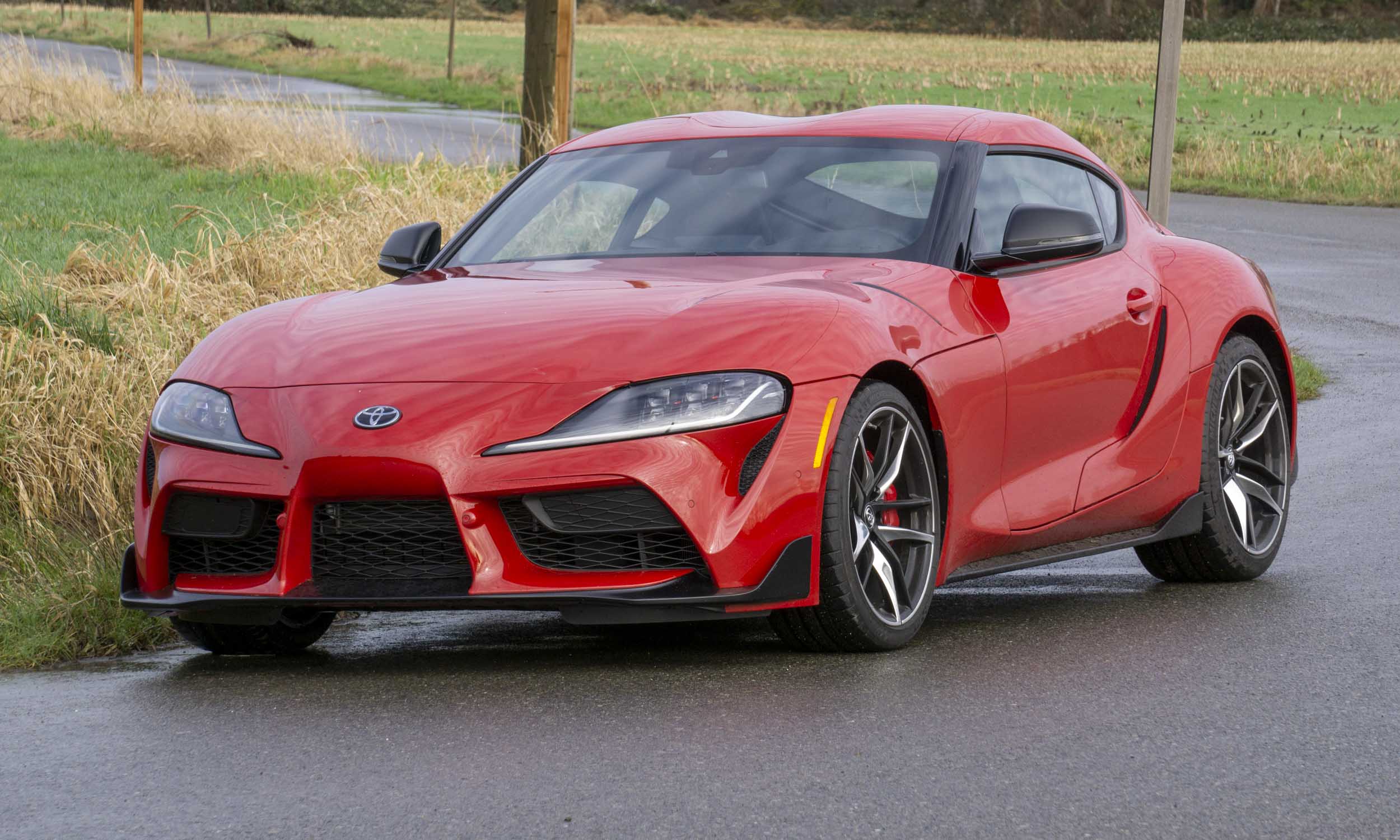 Fender Flares
At the rear, large fender flares begin at the door and curve beautifully over the rear wheels; the driver has a great view of these when looking through the GR Supra’s sideview mirrors. Although the doors have venting that looks as if it would provide airflow to the wheels for brake cooling, the vents are simply cosmetic. 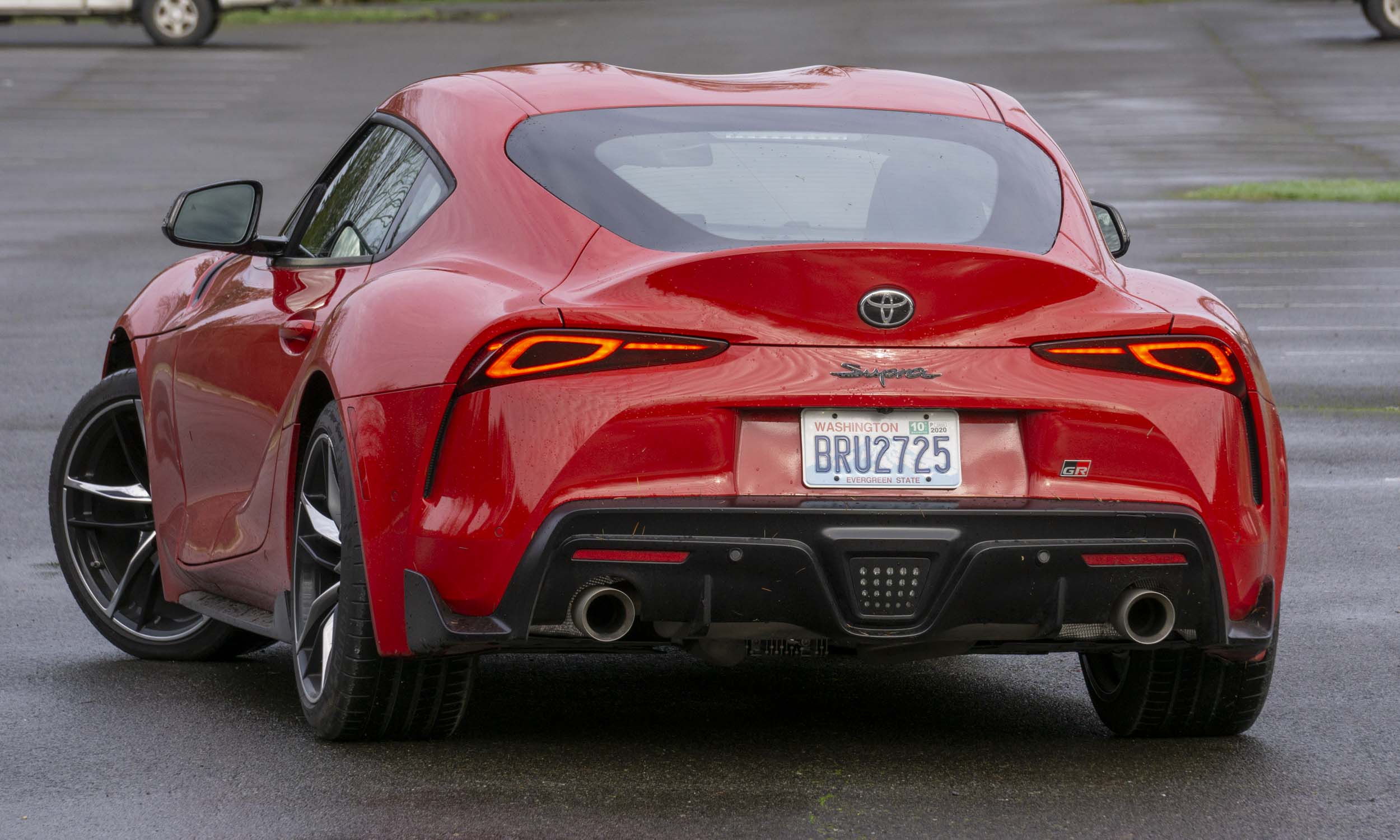 Rear View
At the rear all elements converge toward the GR Supra logo — LED taillights appear to point inward, and the lower rear window tapers down toward the logo, while the glass tapers up (like an upside down triangle), angling up into the integrated spoiler. 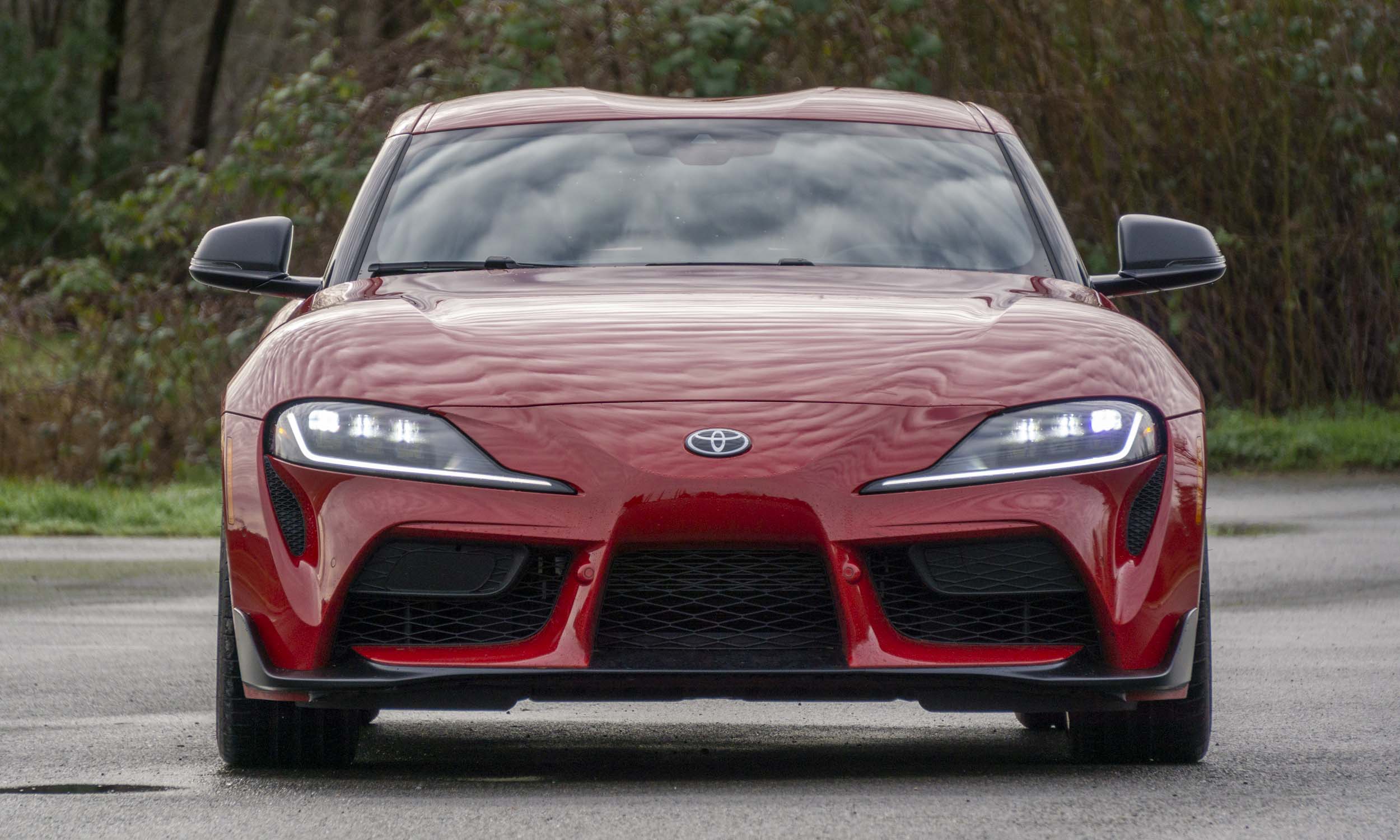 Double Bubble
Our favorite styling element is the double-bubble roof, which also happens to be functional — lowering the centerline of the roof reduces drag without impacting headroom. 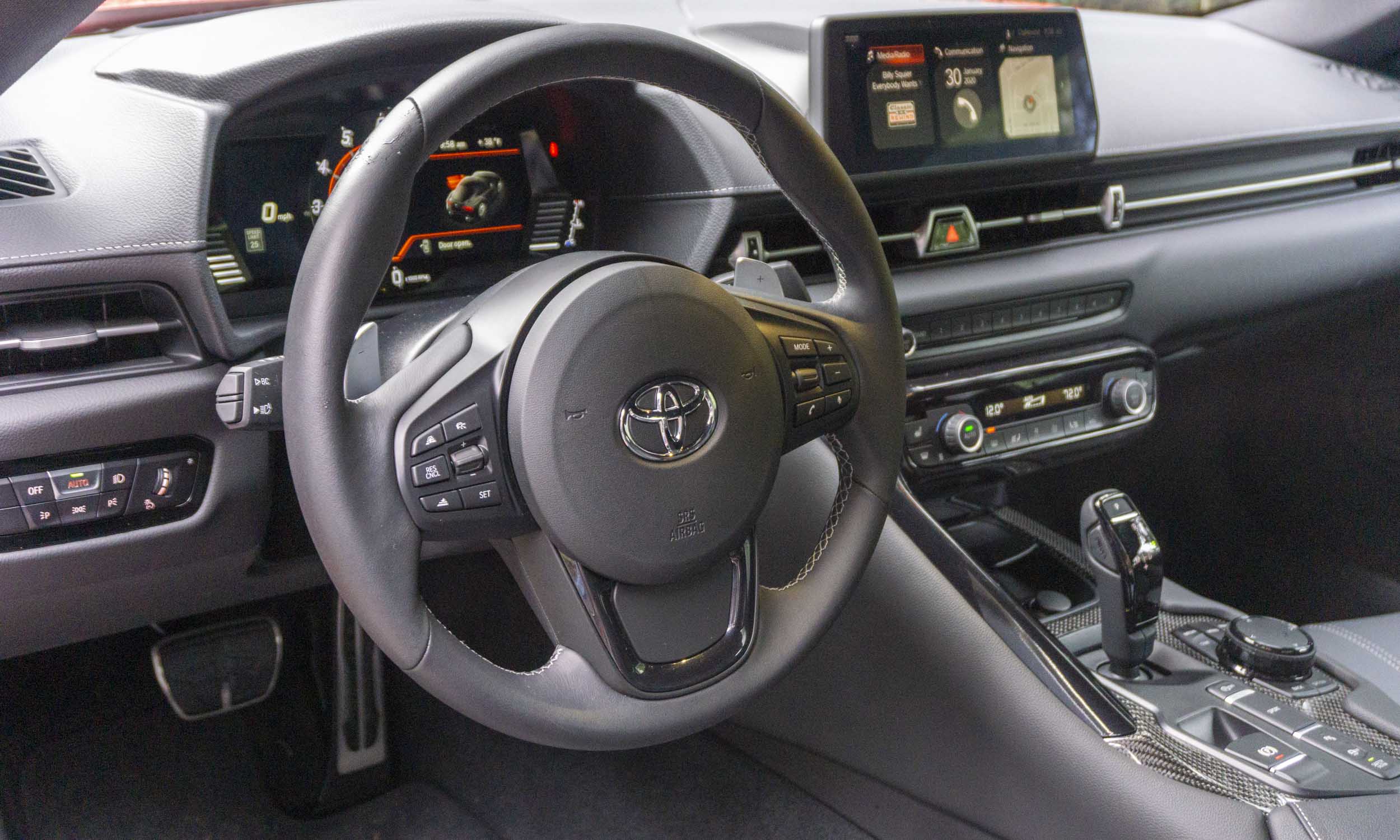 BMW Inside
Upon climbing into the new GR Supra for the first time, drivers might be a little surprised to discover how much BMW influence exists within this car. Toyota partnered with BMW on the engine and chassis; the display screen, interface and shifter are all familiar BMW components. That said, the display screen is large and easy to navigate via a control knob and shortcut buttons in the center console. A volume knob with preset buttons sits below the screen. 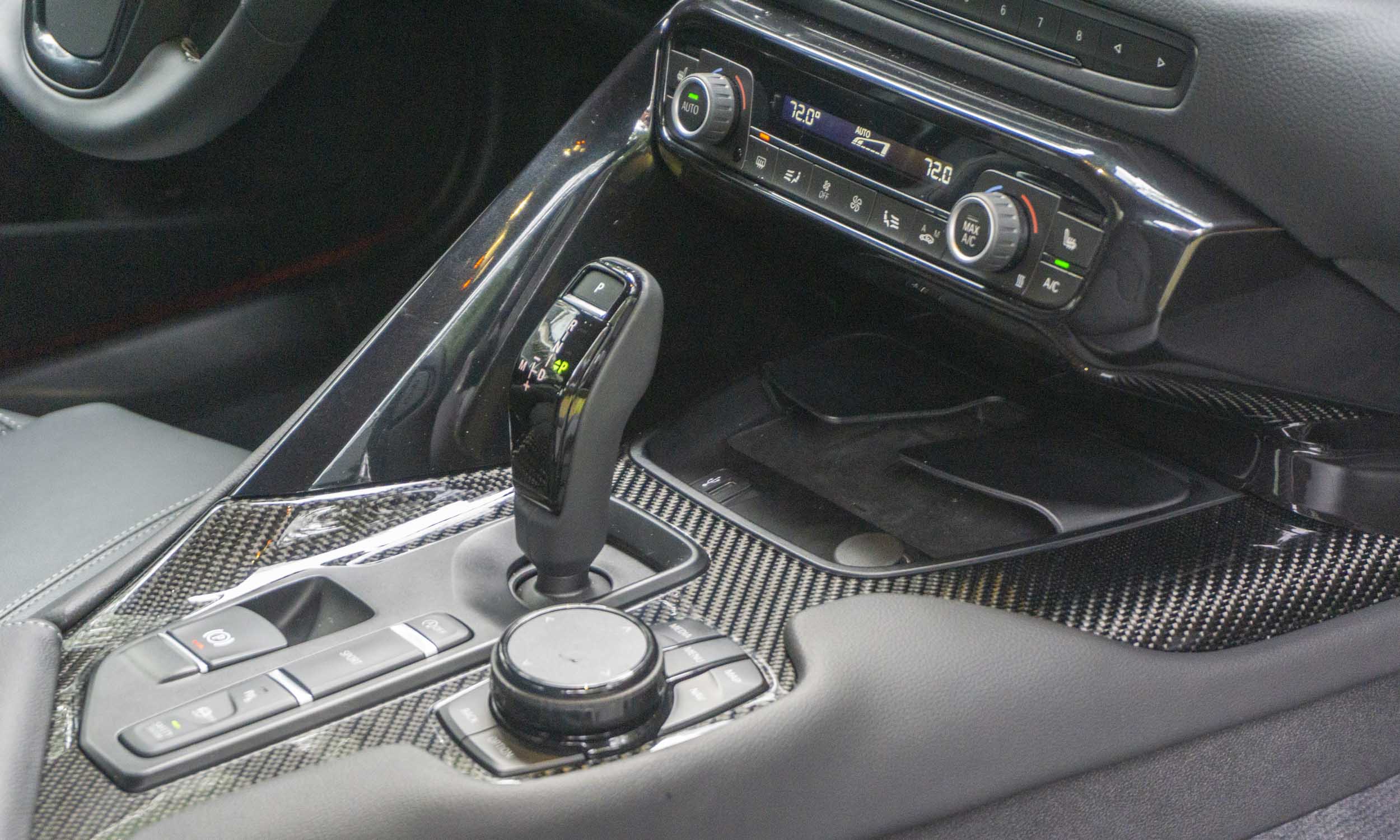 Wireless Charging
At the bottom of the center console, a wireless phone charger keeps electronic devices fresh. Rather than the ubiquitous rubber charging pad, the Supra has a clever charging pocket that holds the phone in place during enthusiastic driving. When the engine shuts off, the driver receives an alert that the phone remains in the charger — a nice touch. 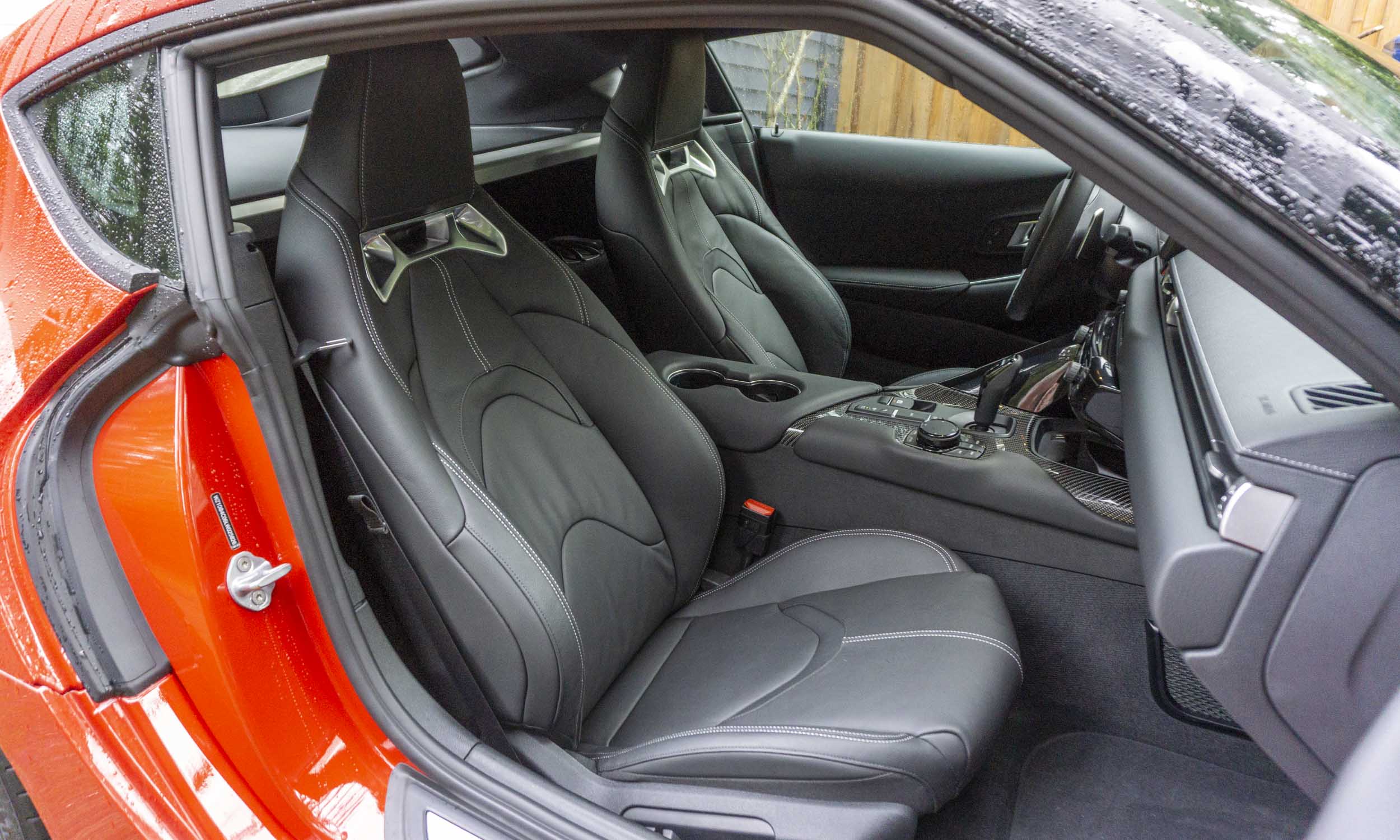 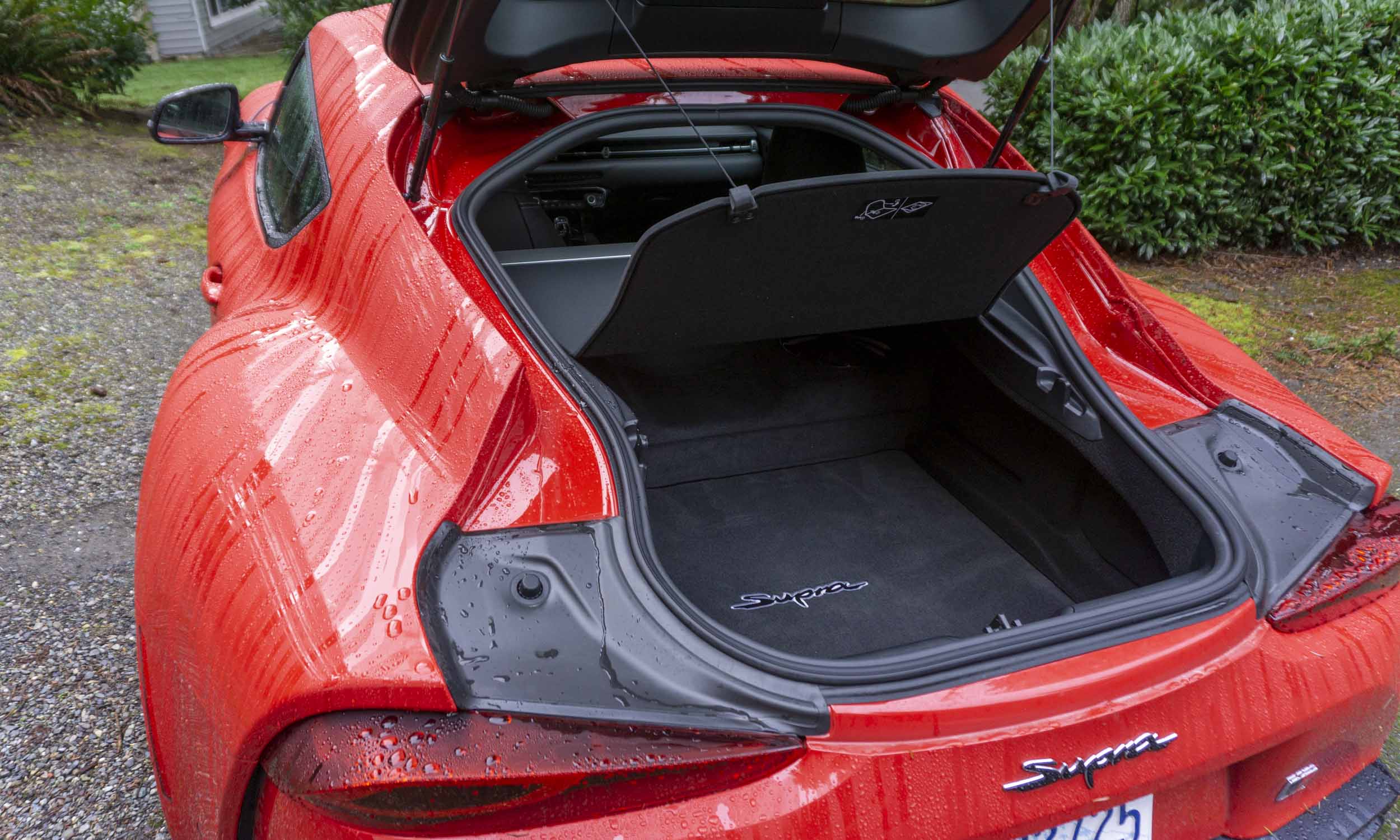 Room for Small Items
A downside of small cars, the cargo area of the 2020 Toyota GR Supra is not terribly spacious. That said, there is adequate space for a small piece of luggage or a few grocery bags. An integrated cargo cover keeps items secure from prying eyes. The cargo area is accessible behind the passenger compartment, making it easy to stow items out of sight. 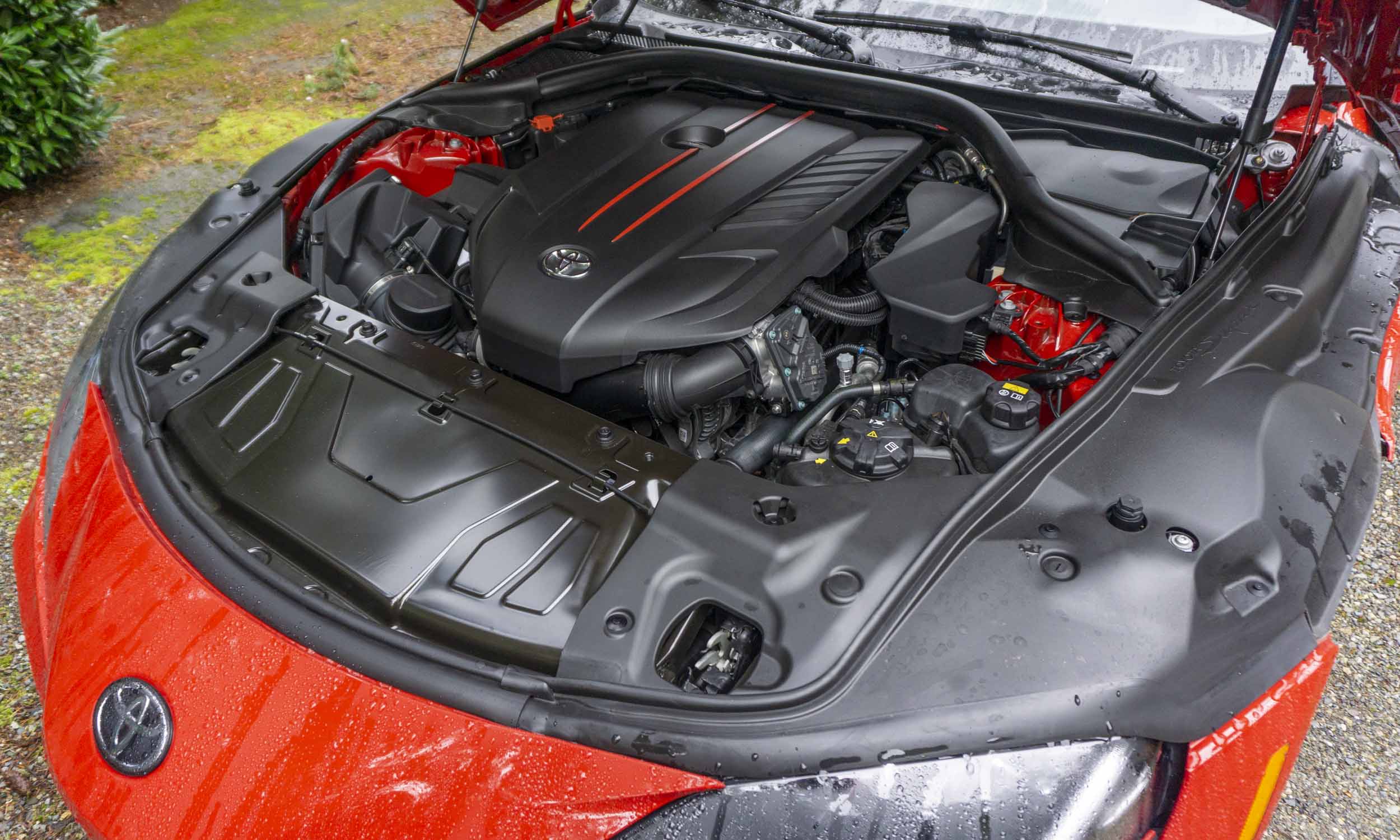 Turbo Power
At the heart of the GR Supra lurks a 3.0-liter inline 6-cylinder engine with a twin-scroll turbocharger and variable valve timing, sourced from BMW. With Toyota tuning and engine mapping, the 3.0-liter engine produces 335 horsepower and 365 lb-ft of torque. According to Toyota performance figures, GR Supra will accelerate from zero to 60 mph in 4.1 seconds. Although we had no measuring devices in our test vehicle, this figure seems plausible. 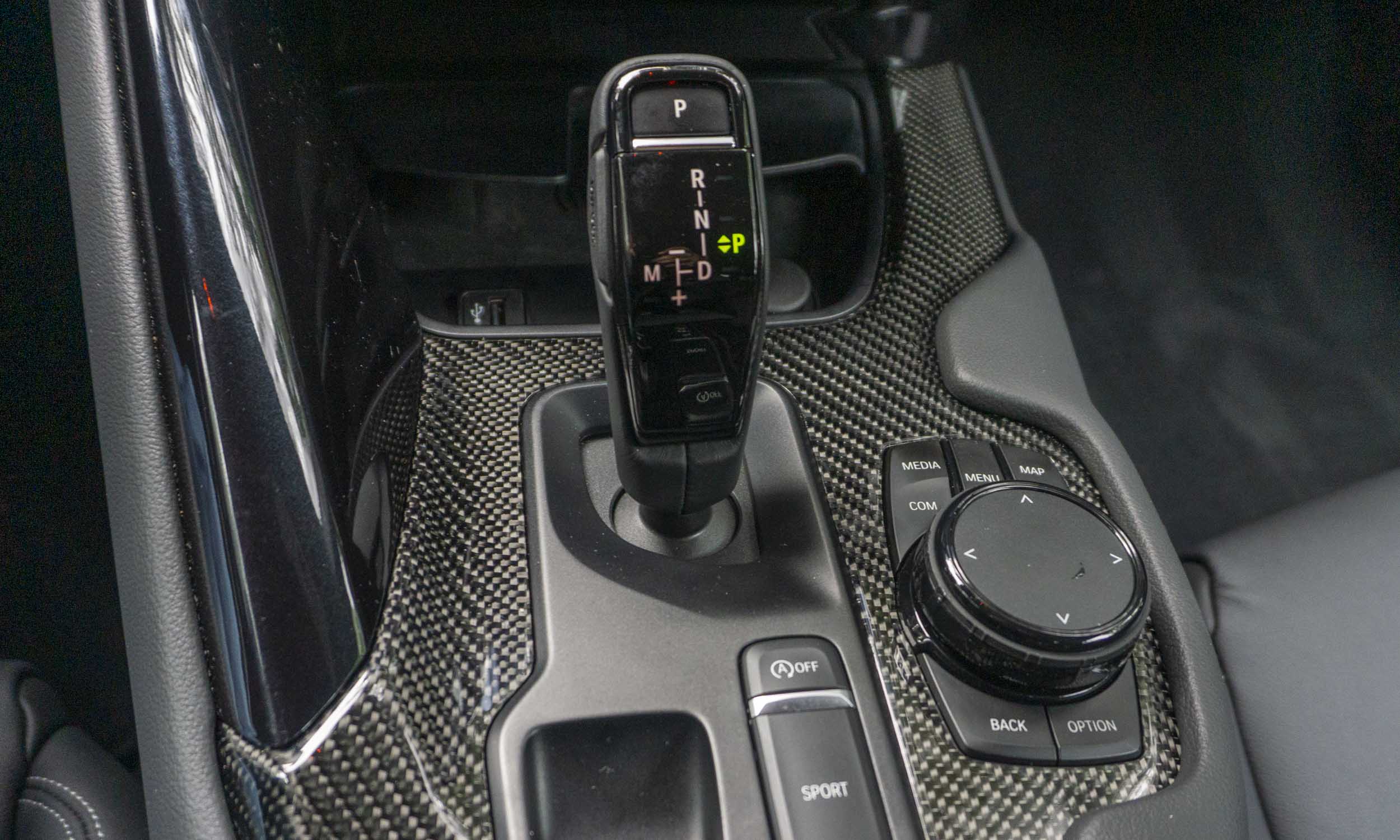 Automatic Transmission
The only transmission available for the 2020 Toyota GR Supra is a ZF 8-speed automatic with manual-shift mode and paddle shifters; a straight-up manual transmission is not offered. Even though rowing through some gears would be fun, the 8-speed automatic works well. Left to its own devices, the automatic shifts extremely quickly with downshifts at precise moments, accompanied by a lovely exhaust burble. Shifting with the paddles provides instantaneous response. 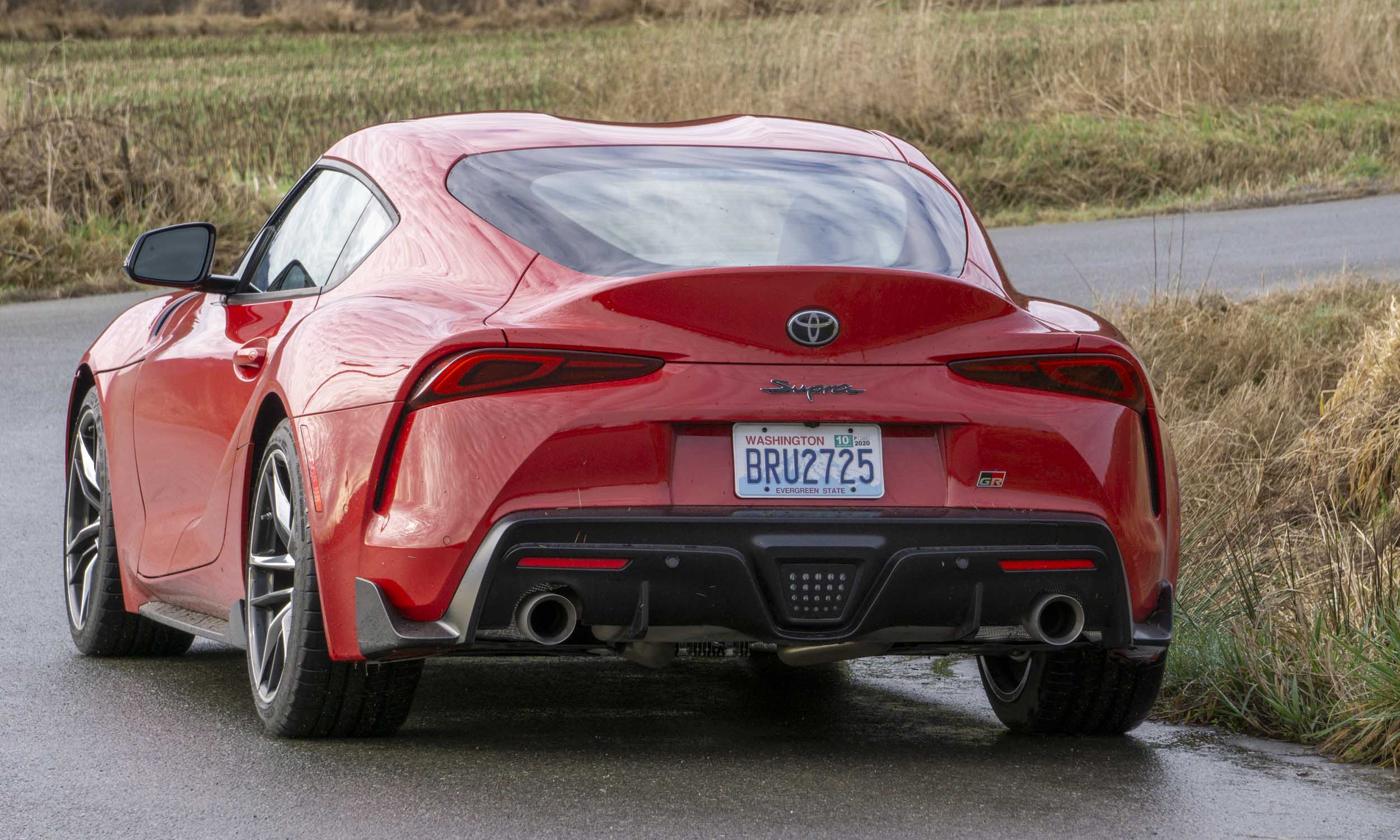 Enjoyable to Drive
On the road the GR Supra shows its colors with spirited response to inputs. Acceleration is strong from a standstill or from speed thanks to plenty of power on tap. With its precise steering and stiff chassis, the 2020 Toyota GR Supra shines on winding back roads where it really excels. Even with its tight handling, the GR Supra offers a surprisingly comfortable ride — firm yet smooth and not jarring in the slightest. The GR Supra is the epitome of an everyday sports car. 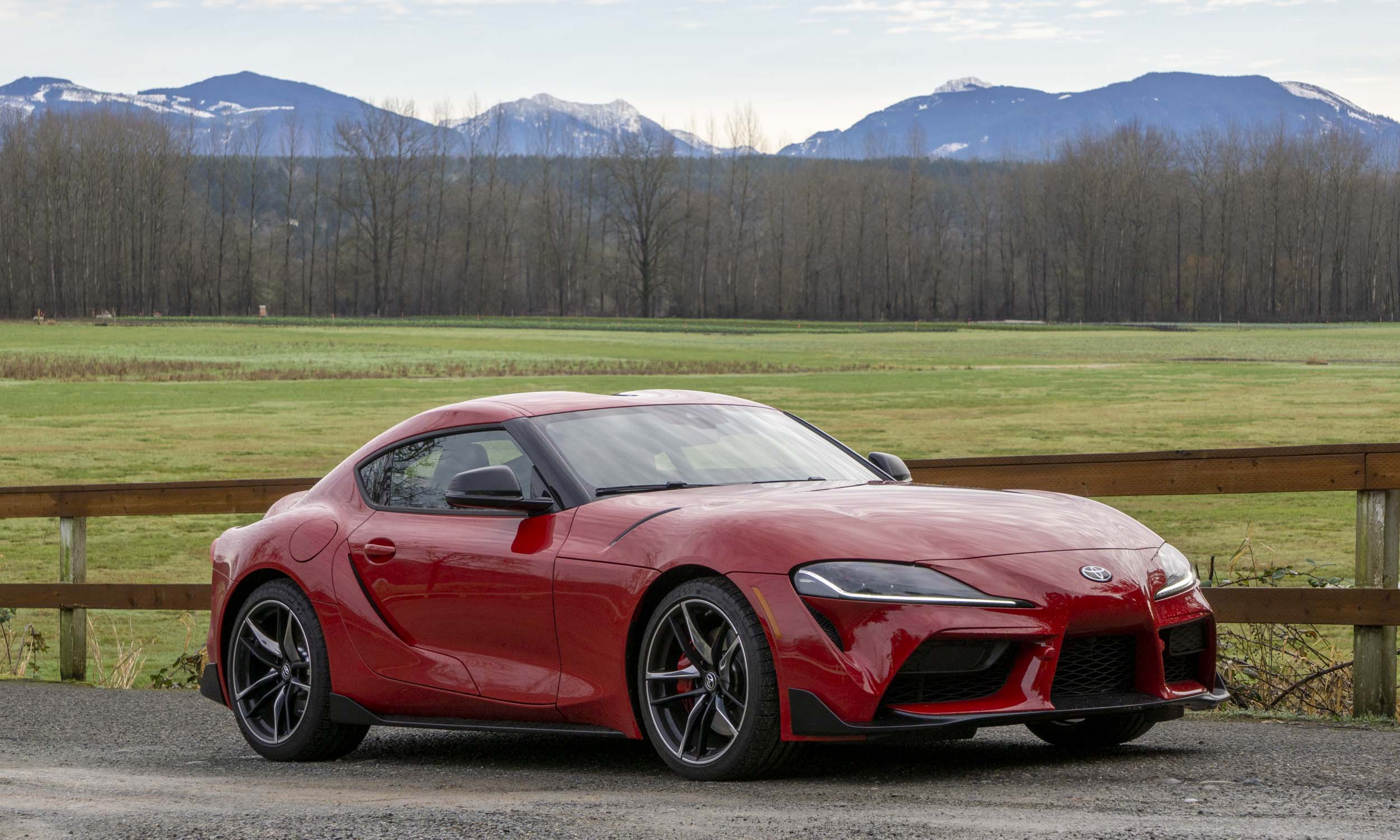 Road Noise
During our frequent drives, the Michelin Pilot Super Sport tires provided excellent grip although they transmitted a lot of road noise into the cabin. Depending on pavement conditions, the noise reached levels that made it difficult to sustain a conversation — a small price to pay. However, in the long term, this could become an annoyance. 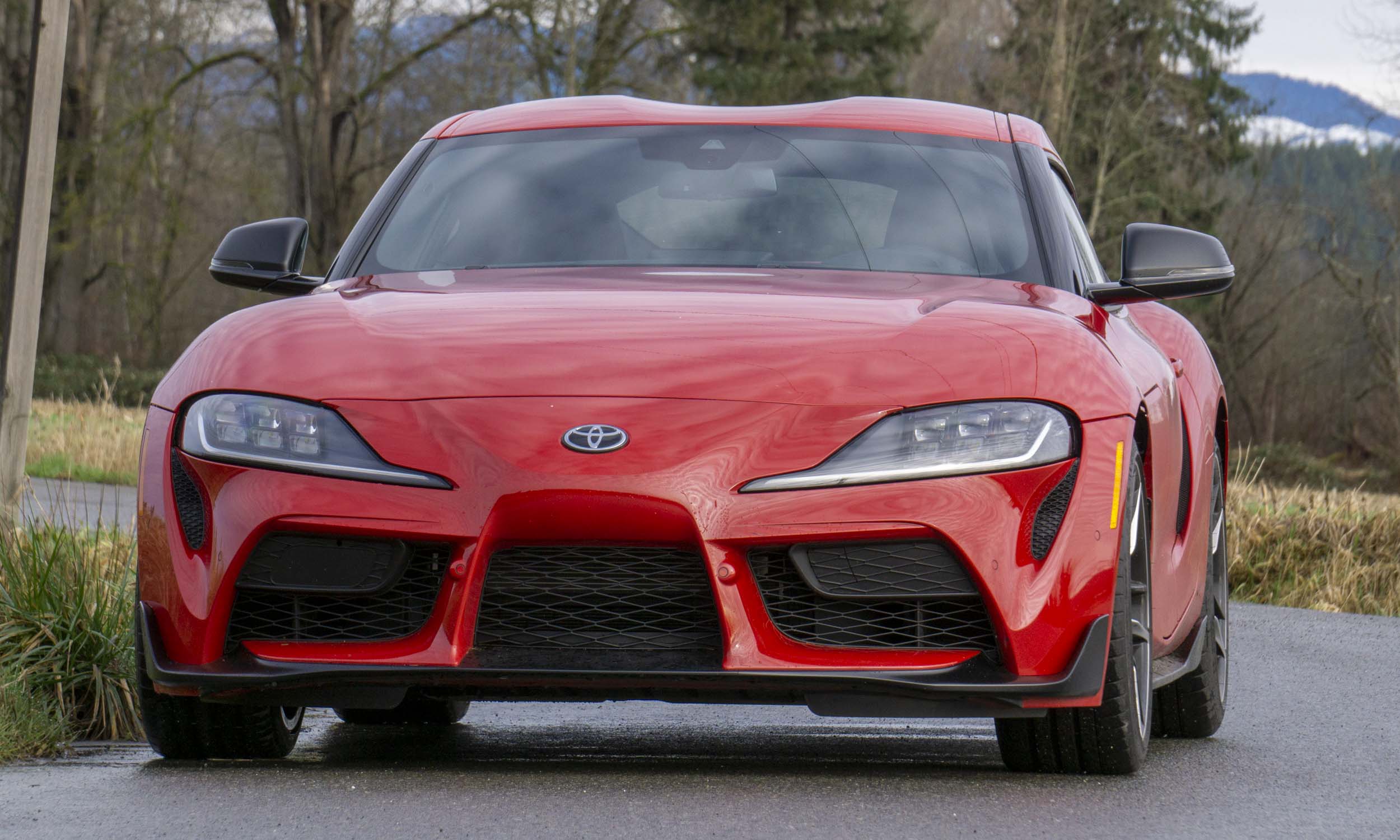 Rating: 9.0
When the GR Supra first arrived, enthusiasts complained it didn’t have enough power; they also lamented the lack of a manual gearbox. After spending a few days behind the wheel of the 2020 Toyota GR Supra, we can report that we were never lacking for power, and although we always appreciate the engagement that a manual gearbox offers, the 8-speed automatic is incredibly good. With standout styling, excellent performance and everyday drivability and comfort, the GR Supra is definitely a car we’d like to keep driving every day.