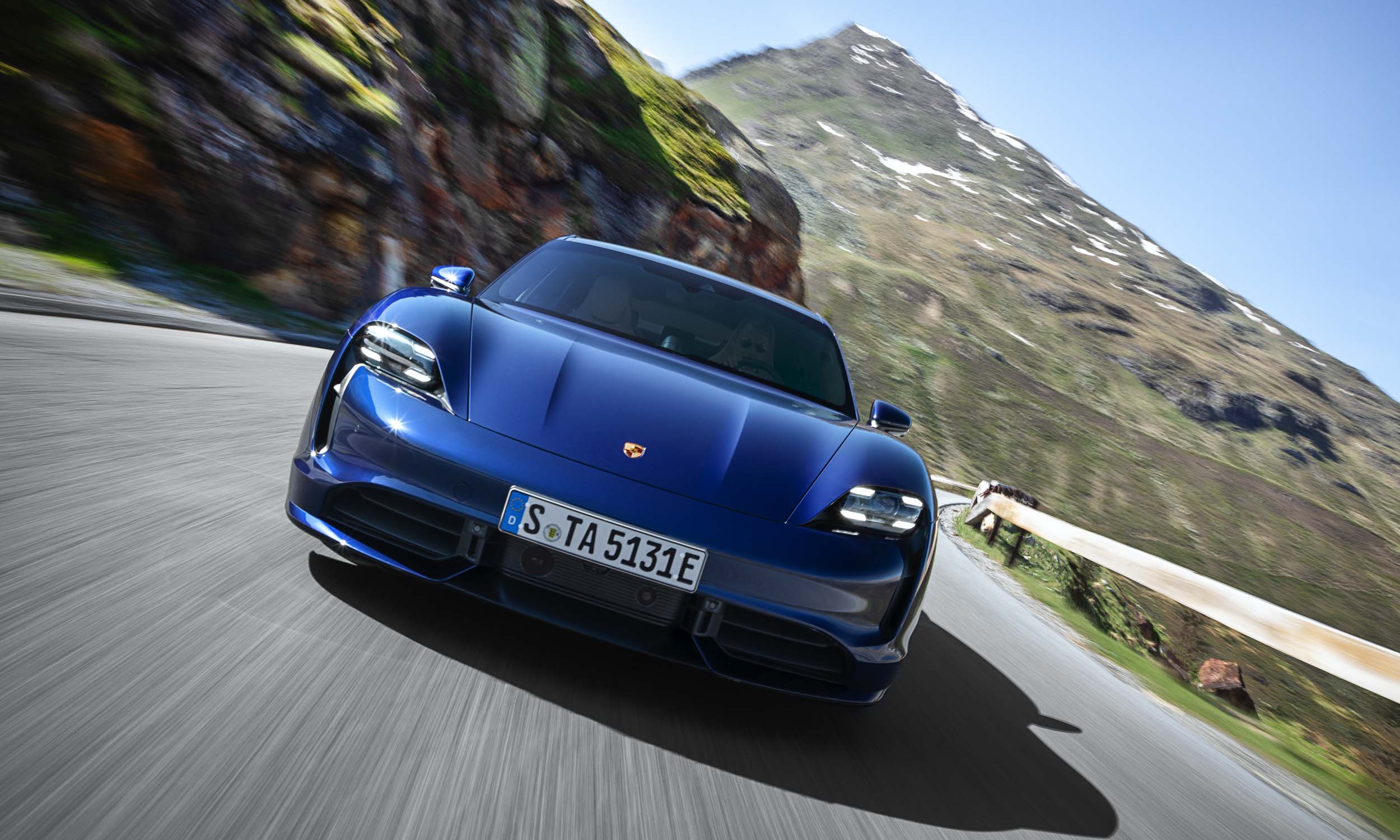 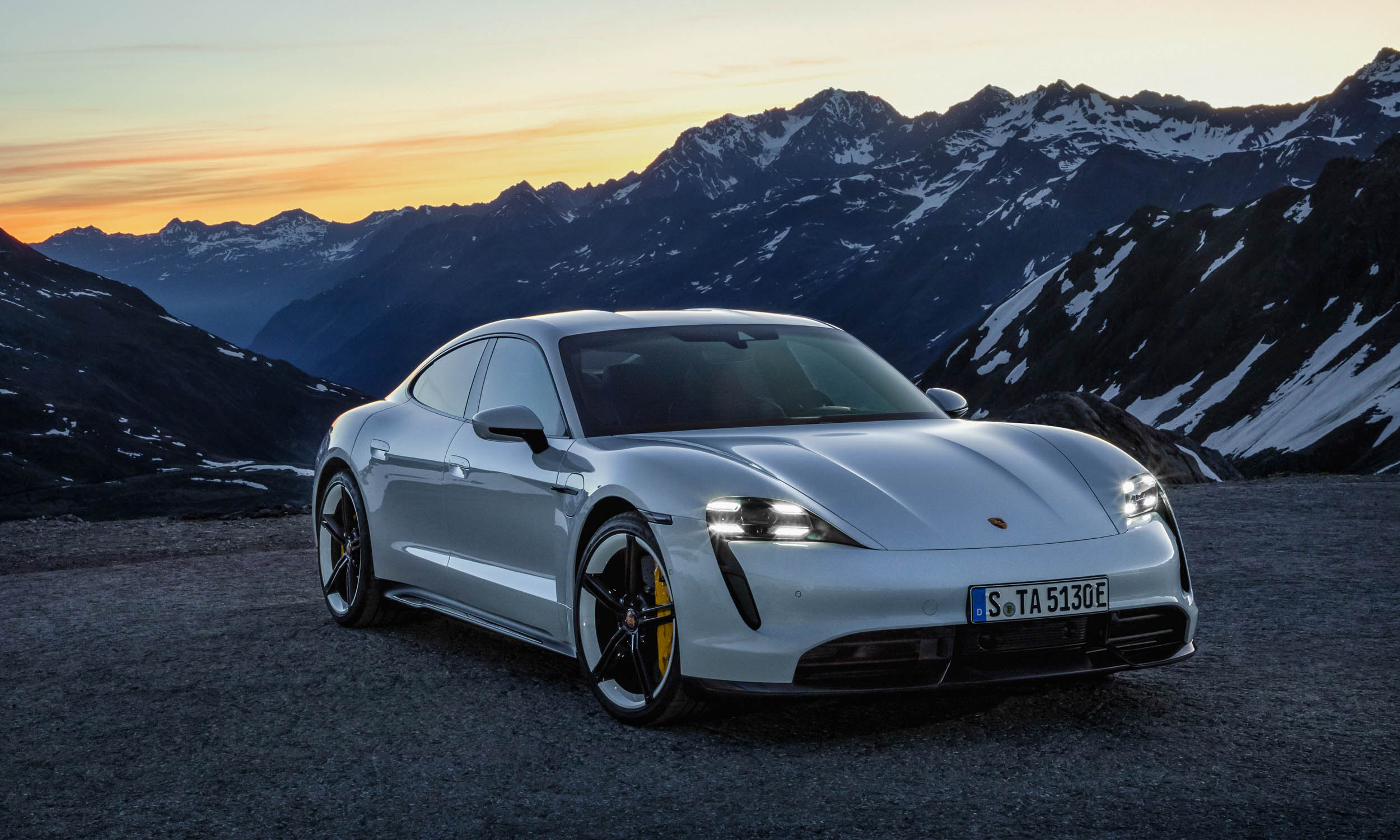 Proper Porsche
“We promised a true Porsche for the age of electric mobility — a fascinating sports car that not only excites in terms of its technology and driving dynamics, but also sparks a passion in people all over the world, just like its legendary predecessors have done. Now we are delivering on this promise,” said Michael Steiner, an executive board member of Porsche AG research and development. 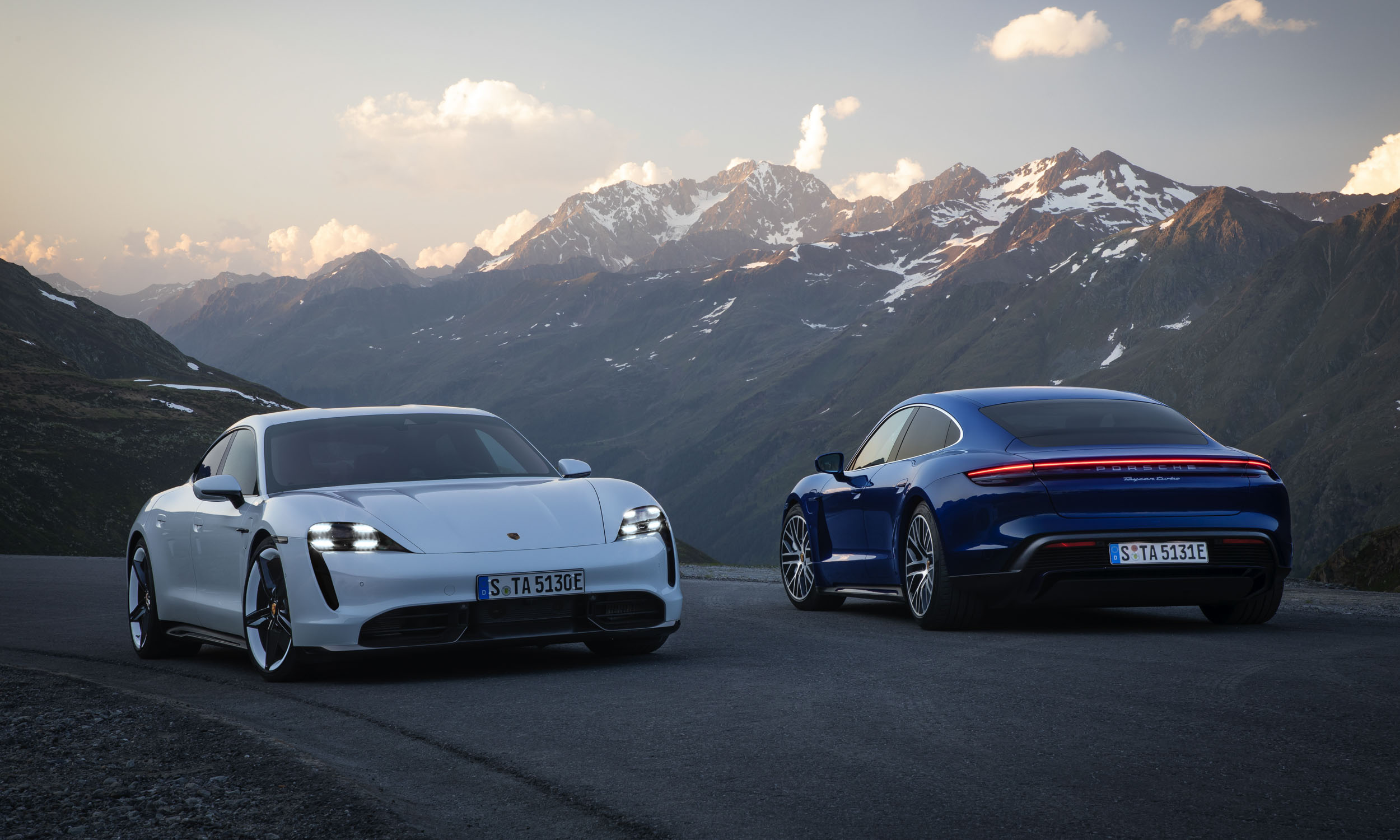 Turbo and Turbo S
The Taycan premieres as a 4-door sports car that offers all the performance expected of a Porsche — with a fully electric powertrain. Two versions will be offered at launch: the Taycan Turbo and the Taycan Turbo S. Speculation exists about why “turbo” is part of the new car’s nomenclature; some say it reflects Taycan’s prominent position within the Porsche lineup. 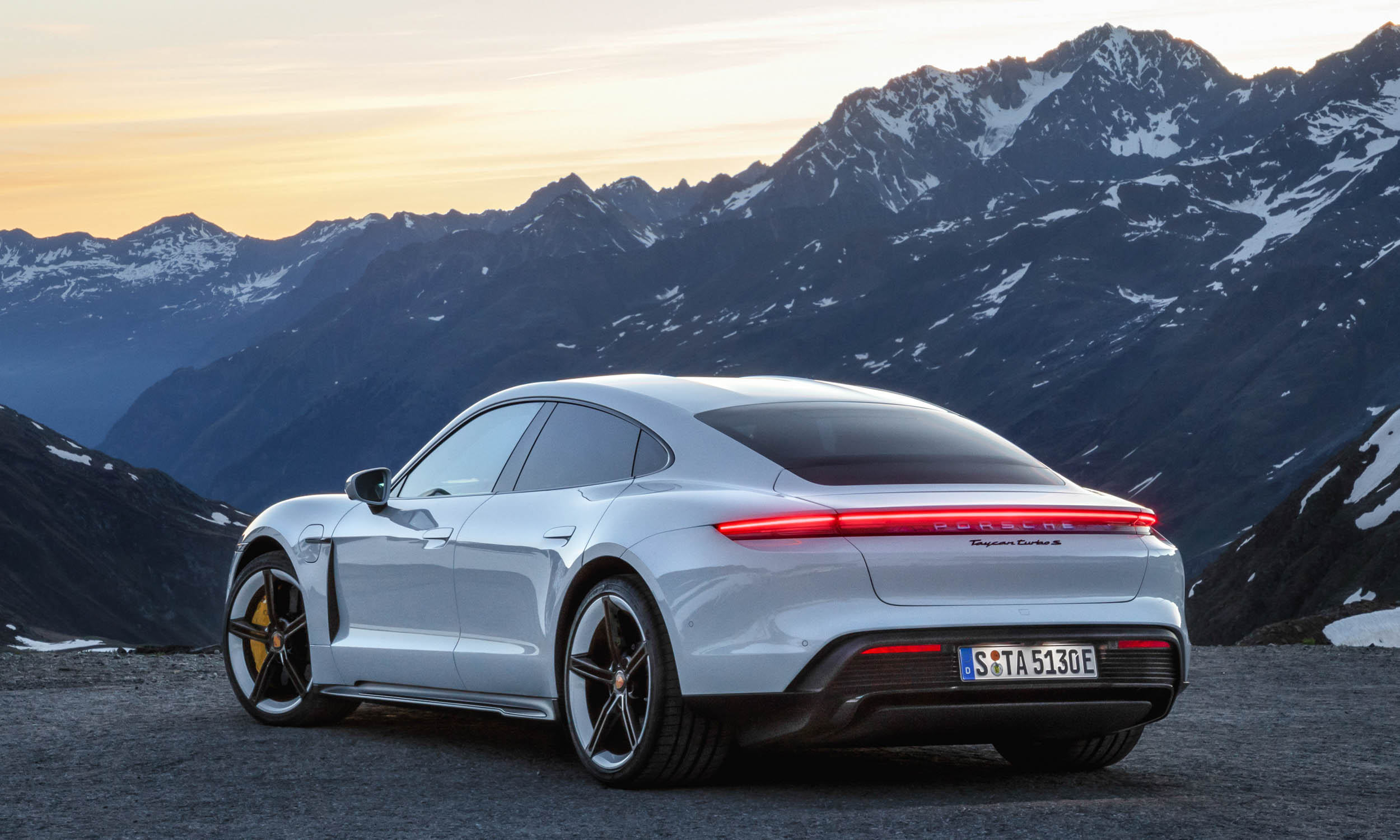 Up to 750 Horsepower
Power for Taycan comes from two electric motors — one at each axle – which also creates an advanced 4-wheel drive system. The Taycan Turbo produces up to 670 horsepower and 626 lb-ft of torque, while the top-level Taycan Turbo S generates a staggering 750 horsepower and 774 lb-ft of torque, making it the most potent vehicle in the Porsche lineup. Power gets directed through a 2-speed transmission — first gear provides the ultimate in acceleration, while second gear exists for higher efficiency when travelling at higher speeds. 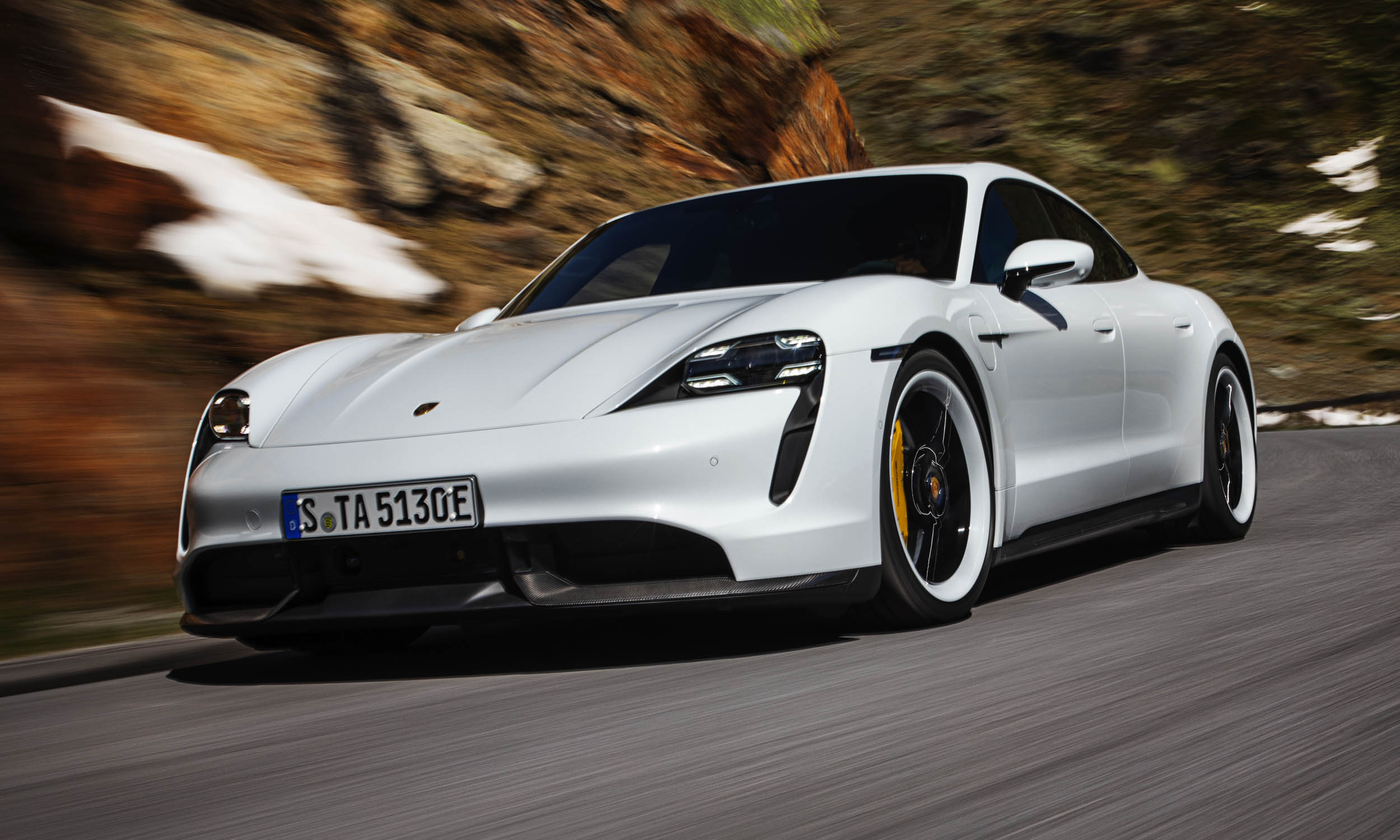 Extremely Quick
With maximum torque available almost immediately, acceleration will be eye-watering — the Taycan Turbo will sprint to 60 mph in 3.0 seconds, while the more powerful Turbo S will complete the same task in a mere 2.6 seconds. Porsche limits top speed for both versions to 161 mph. 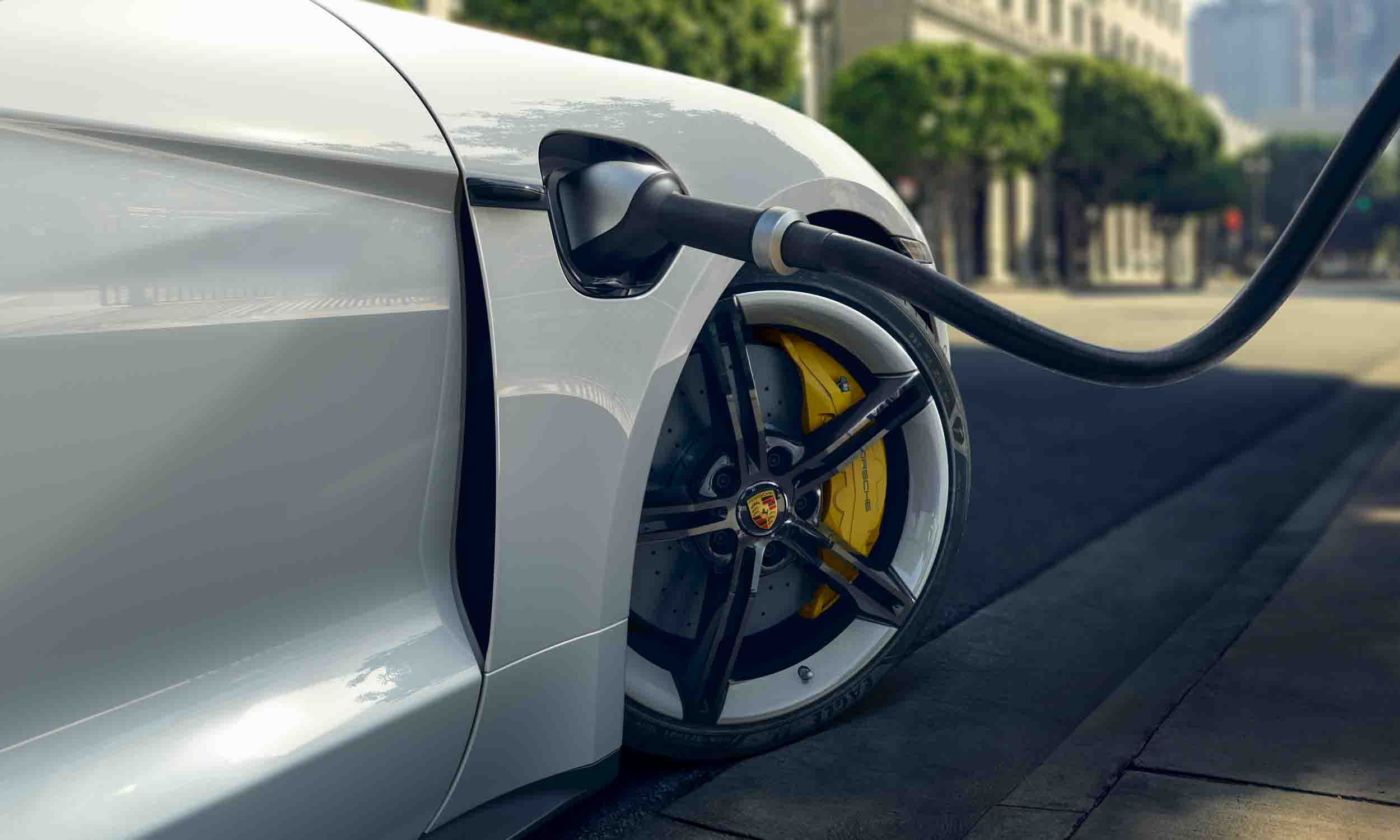 Quick Charge
The Taycan will be the first production car to use an 800-volt system, which means that charging time from 5 to 80 percent would be under 25 minutes. Taycan’s full driving range has not been announced by the automaker. 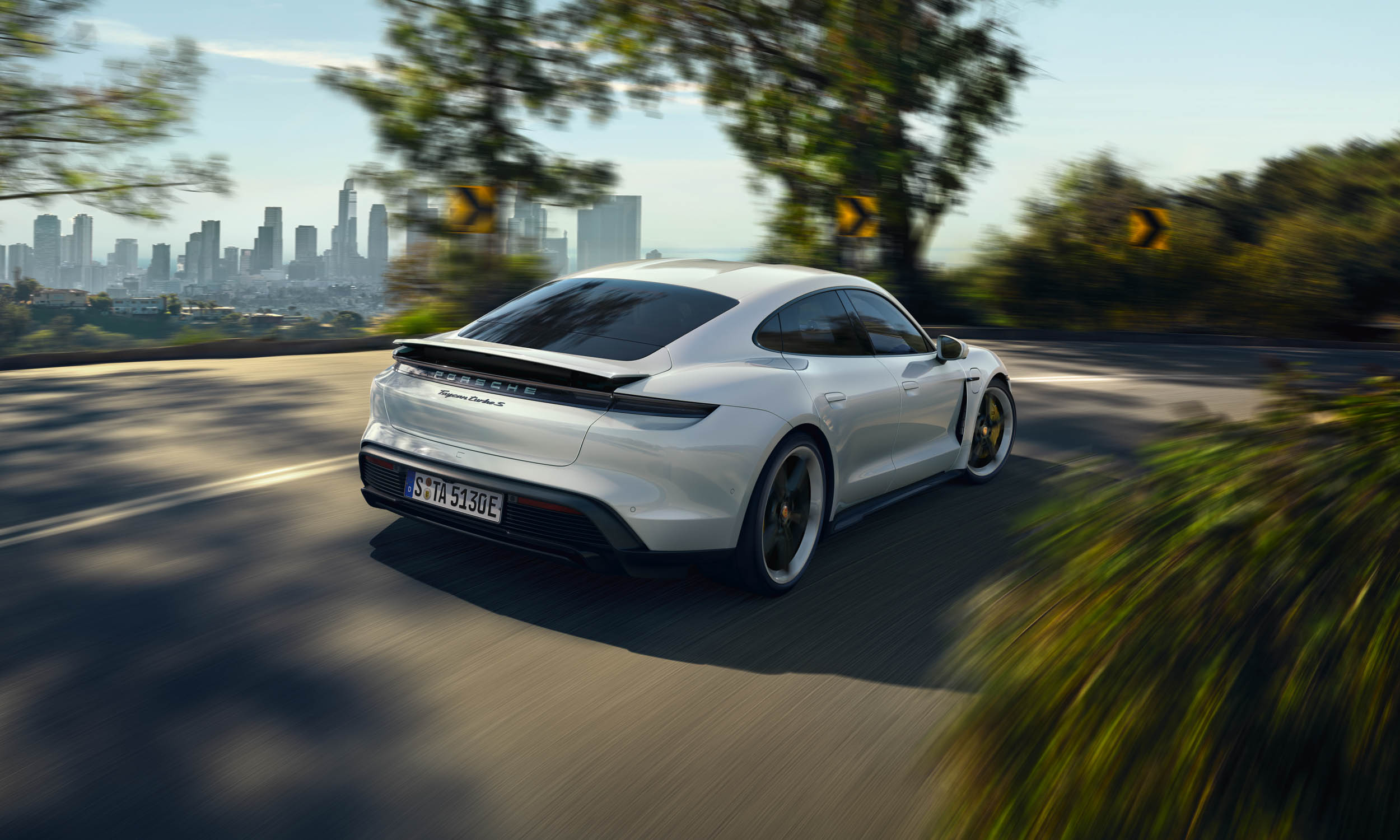 New Era
Porsche has ably demonstrated that electrification produces excellent performance, confirmed by the Panamera and Cayenne plug-in hybrid models; the fully electric Taycan is the next logical step. “The Taycan links our heritage to the future. It carries forward the success story of our brand — a brand that has fascinated and thrilled people the world over for more than 70 years,” said Chairman of the Executive Board of Porsche AG Oliver Blume, who opened the world premiere in Berlin. “This day marks the start of a new era,” Blume enthused. 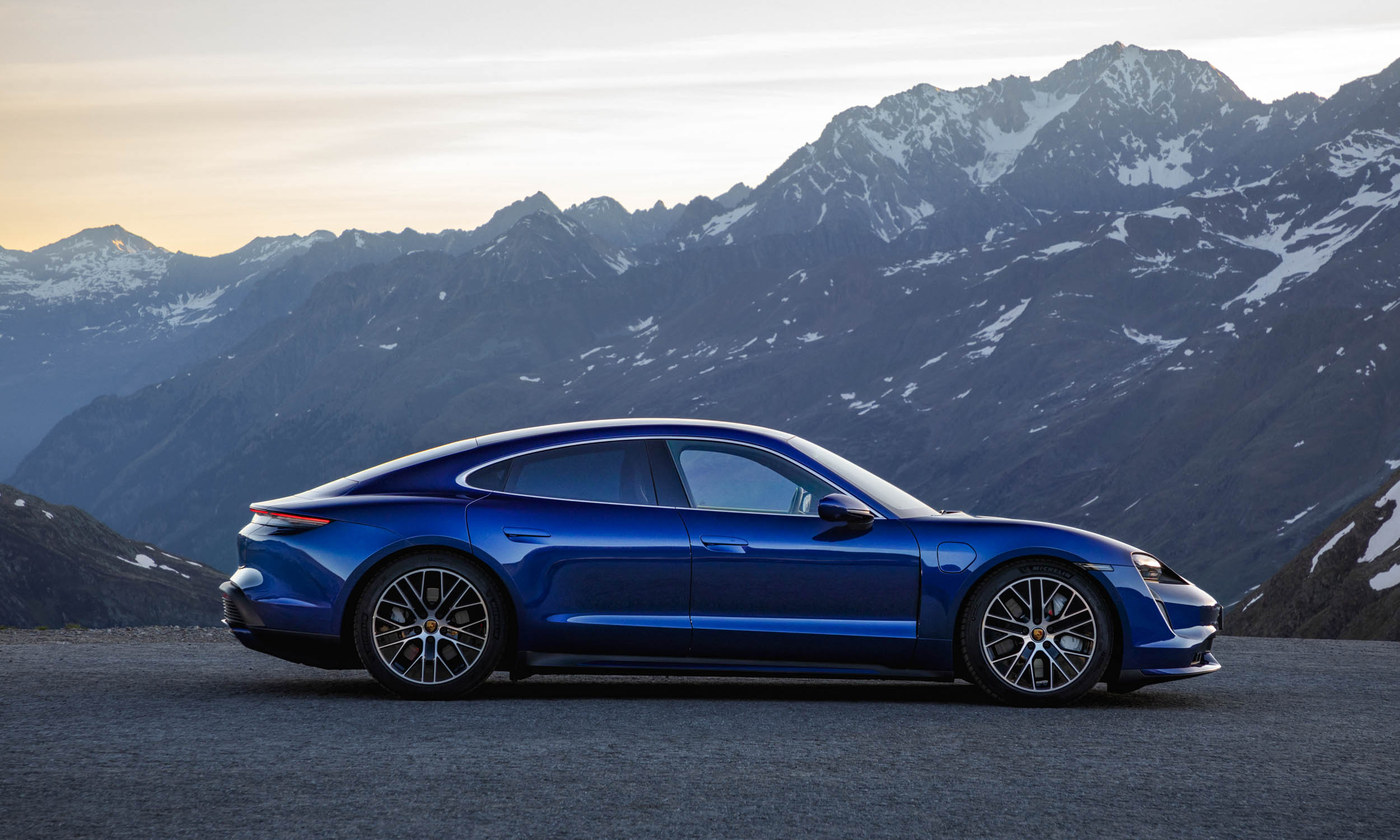 Efficient Design
Taycan’s design team made sure the new model is easily recognizable as a Porsche, with its sleek body and roofline that slopes toward the rear in its signature Teutonic taper. The headlights have a futuristic look, while at the rear a light bar over the large PORSCHE name evokes the look of the new 911. Taycan’s coefficient of drag is a very low 0.22, which optimizes energy consumption and range. 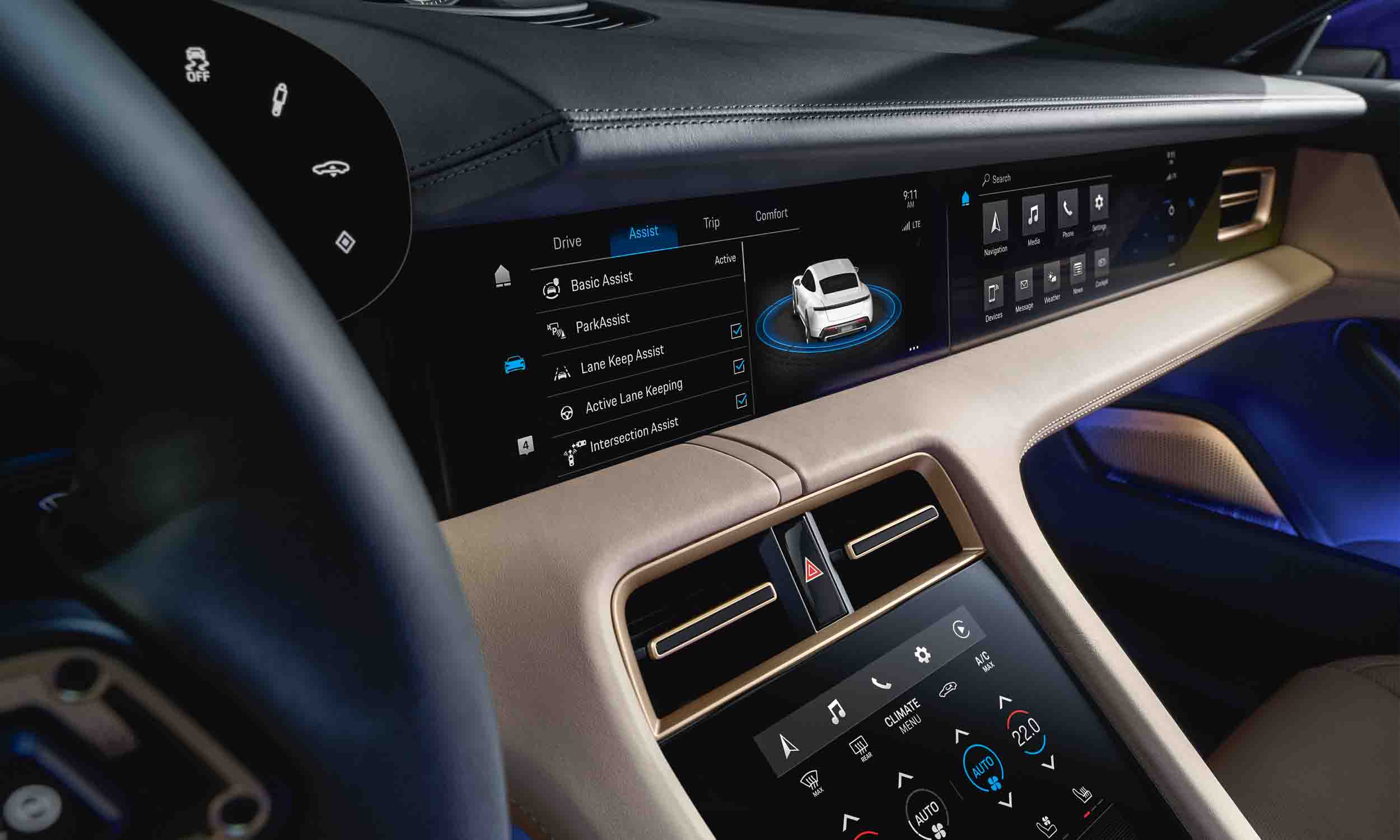 Advanced Interior
Inside Taycan, occupants experience a new dashboard that features a standard 10.9-inch infotainment display as well as an optional passenger display; both meld behind a single glass panel. Eschewing almost all hard buttons or knobs, the technologically-sophisticated Taycan’s user interface employs a touchscreen or voice control that responds to the phrase, “Hey Porsche.” 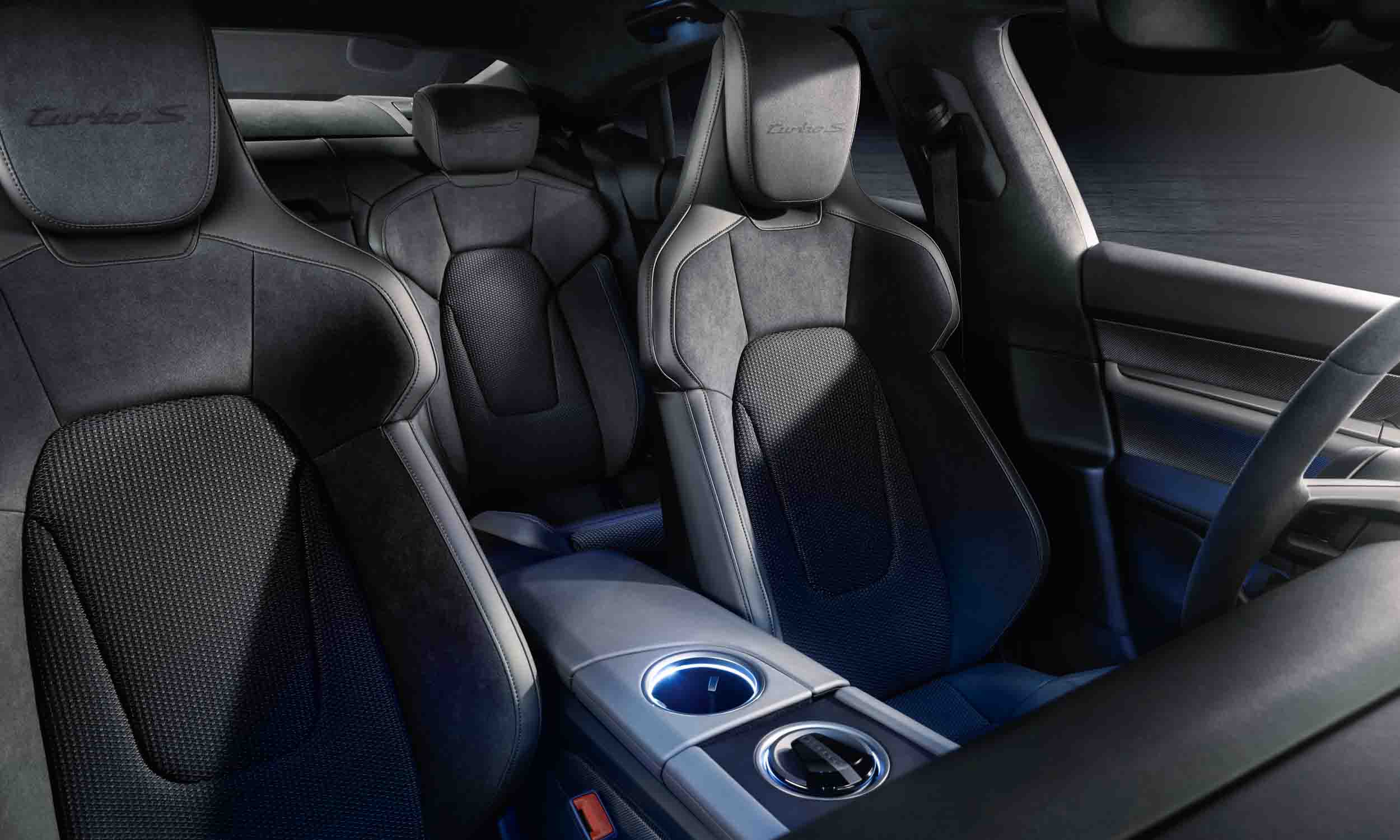 No Leather Required
Taycan will be the only Porsche to be offered without a leather interior. Instead, interiors feature recycled materials to emphasize the sustainability of the electric car. 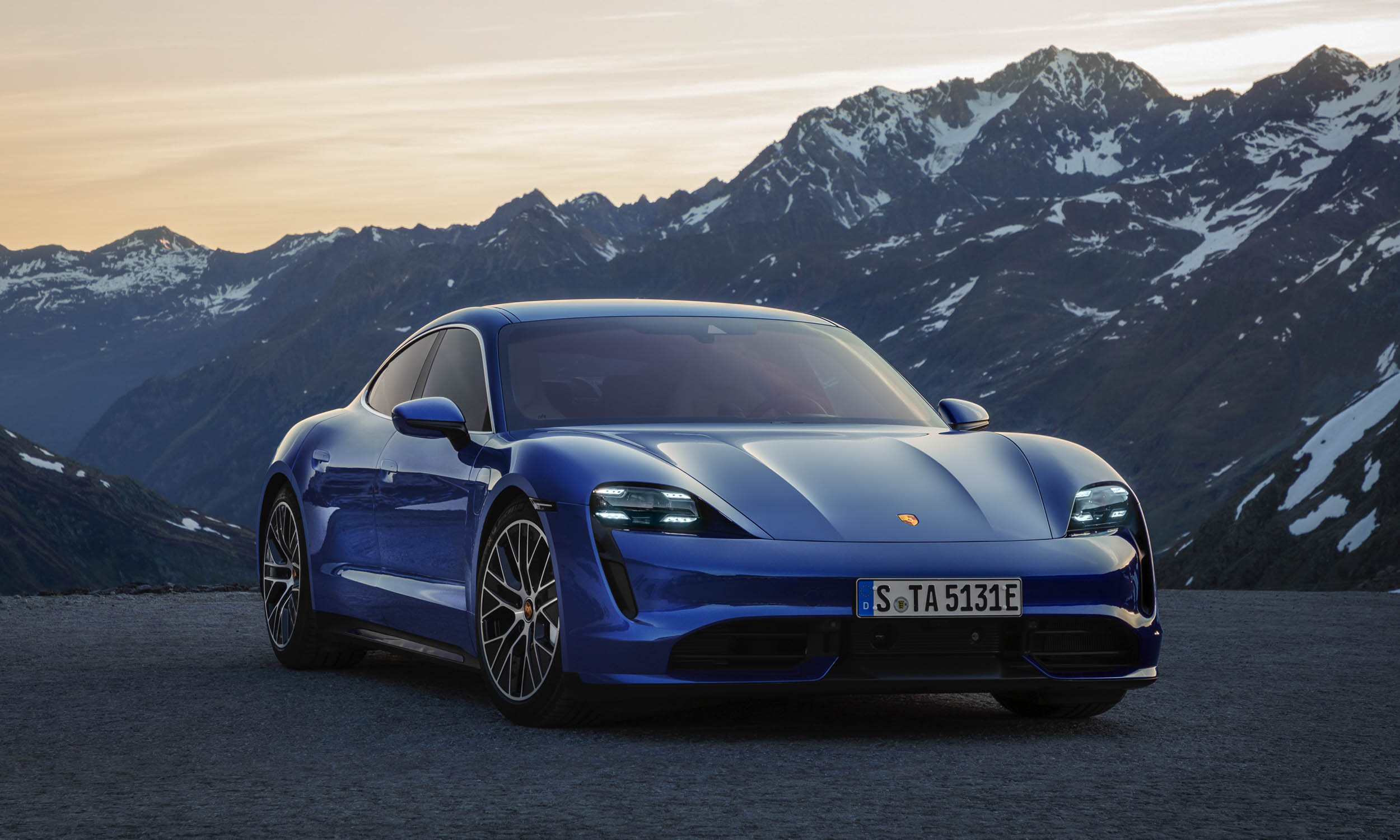 More to Come
As mentioned previously, the Turbo and Turbo S will be the first Taycans available. Porsche intends to offer reduced-power variants that will be introduced later this year. The automaker also has plans for the Taycan Cross Turismo, which is expected to arrive in showrooms by the end of 2020. 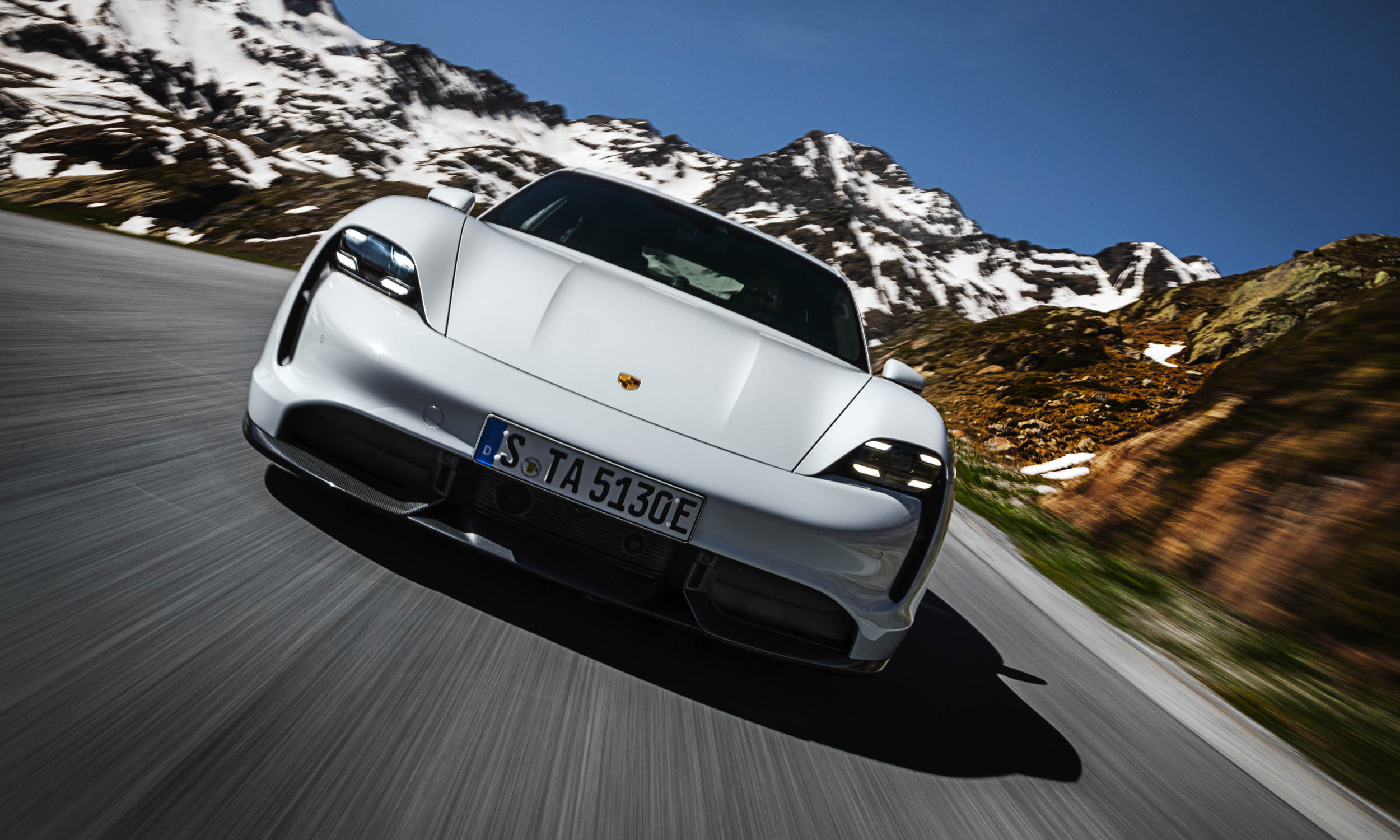 Arriving Soon
The Porsche Taycan Turbo has a base retail price of $150,900, while the more powerful Turbo S is priced at $185,000. Expect the new fully-electric Porsche Taycan to reach showrooms later this year. 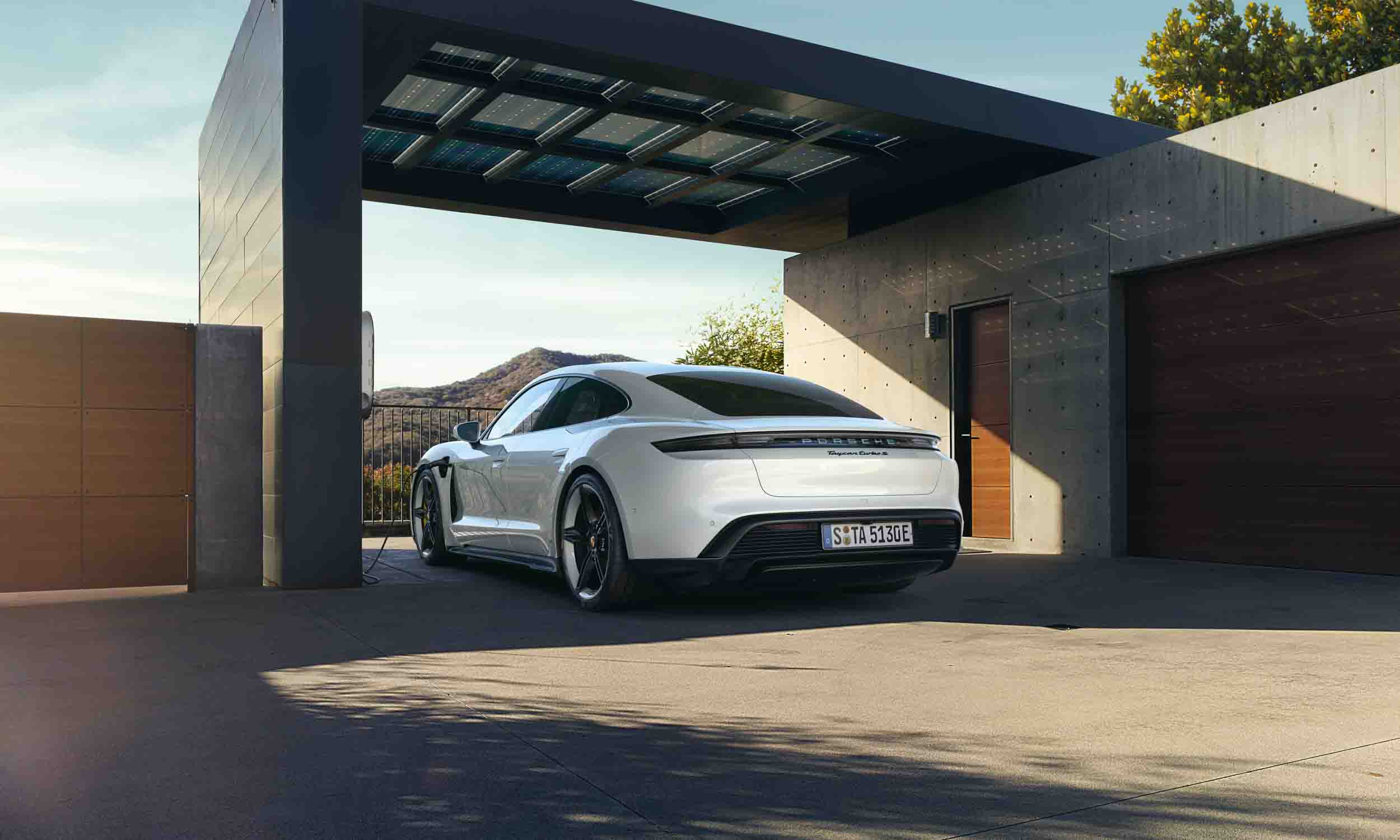 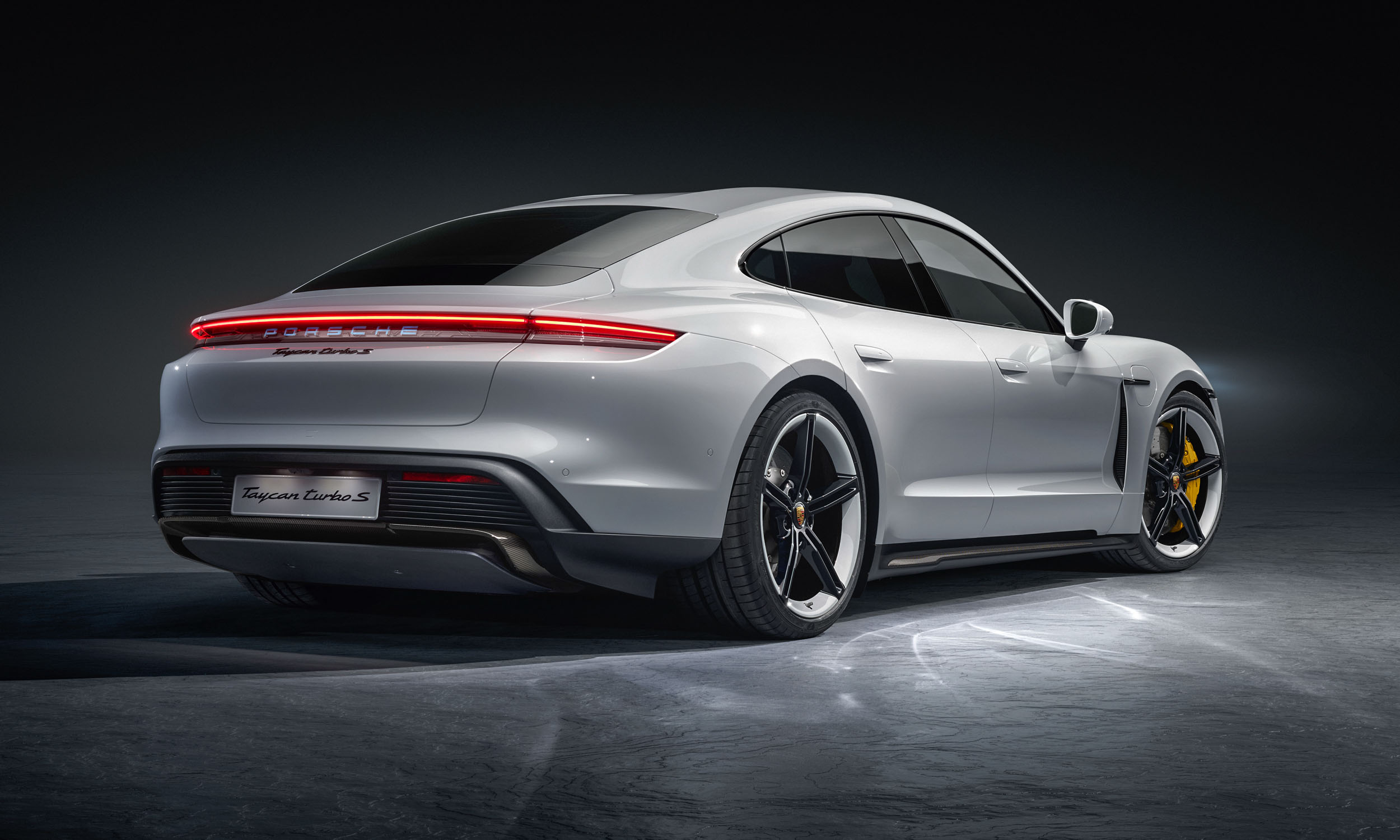 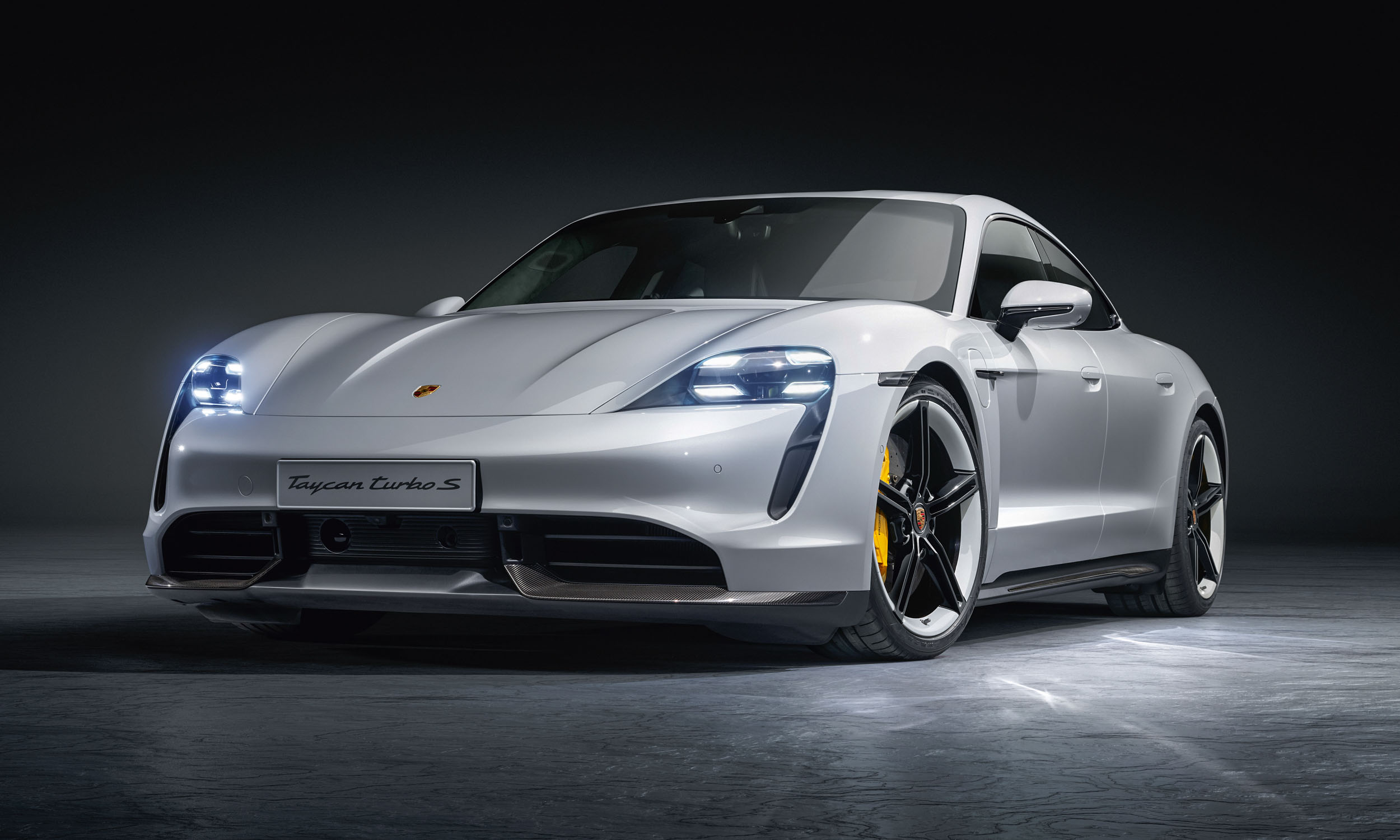 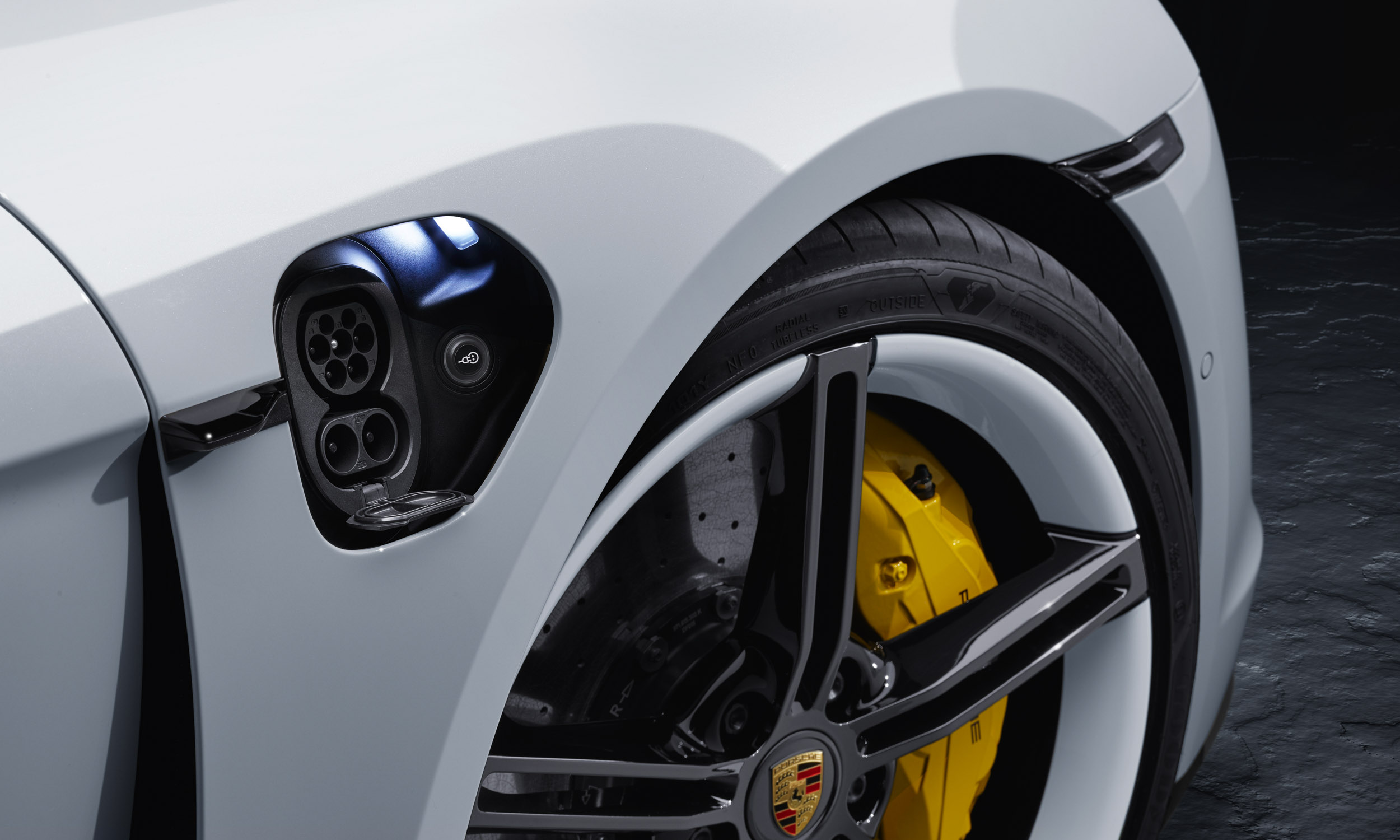 Porsche Taycan
Charge port is of a new design – uncertain of the compatibility with current chargers. 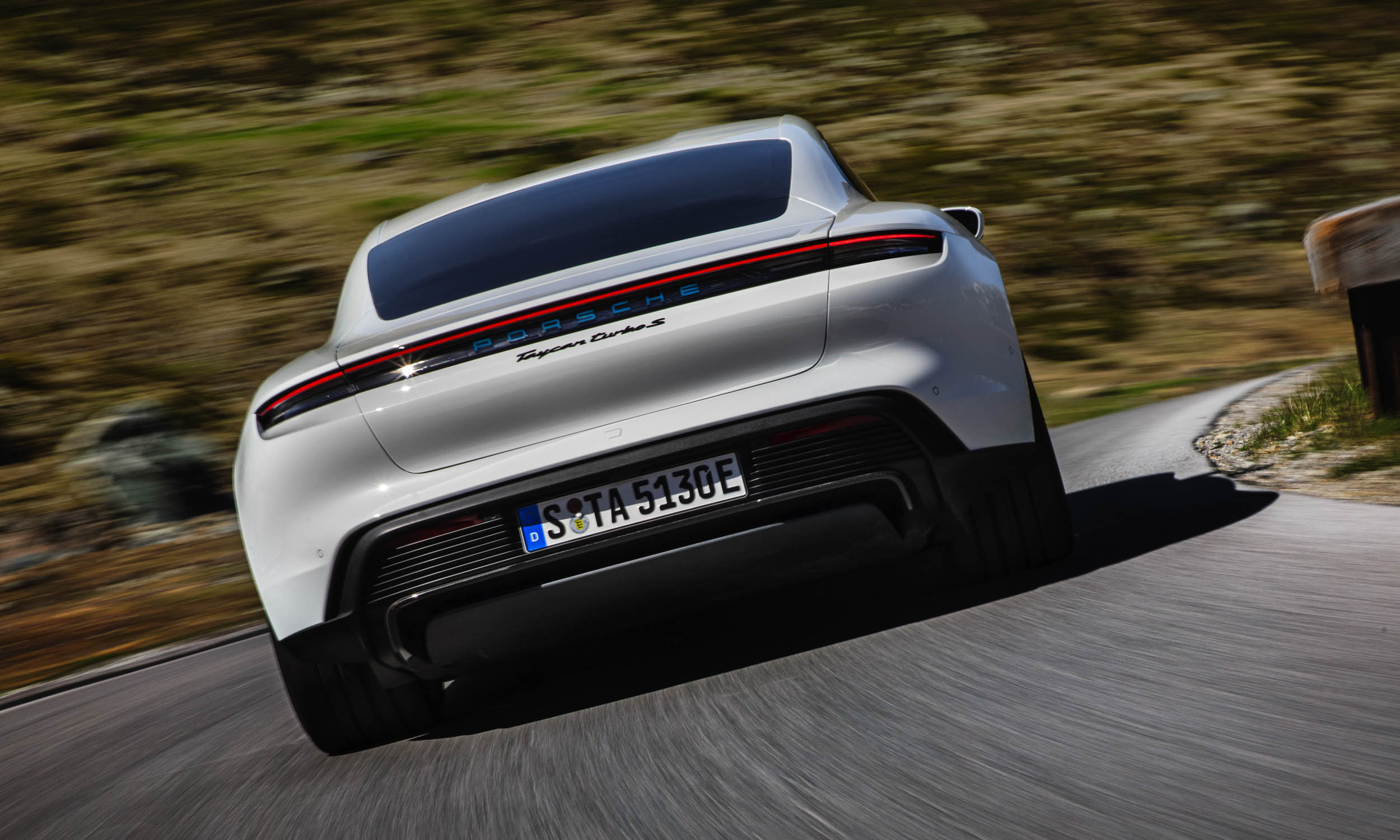 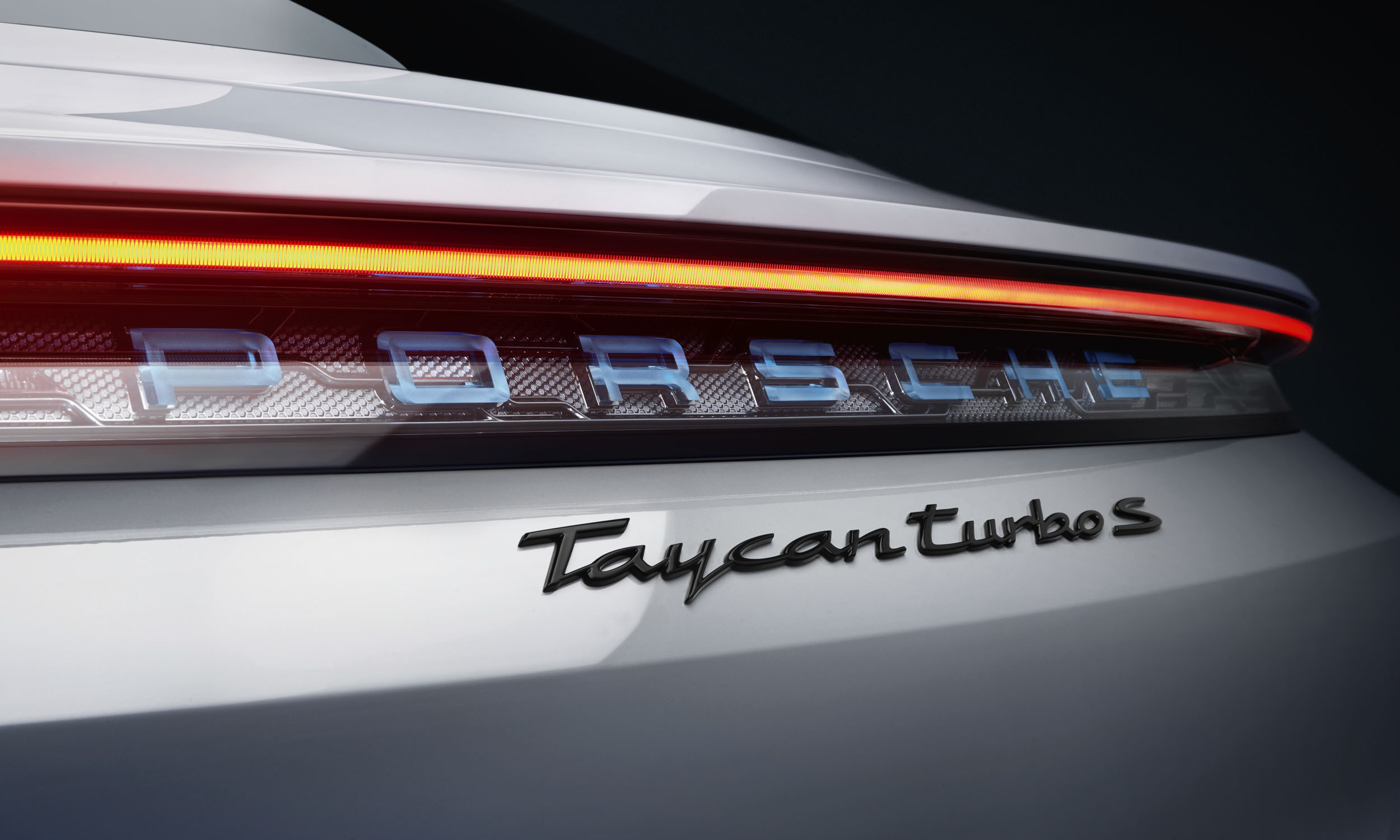 Porsche Taycan
Similar to 911 but with a more high-tech look. 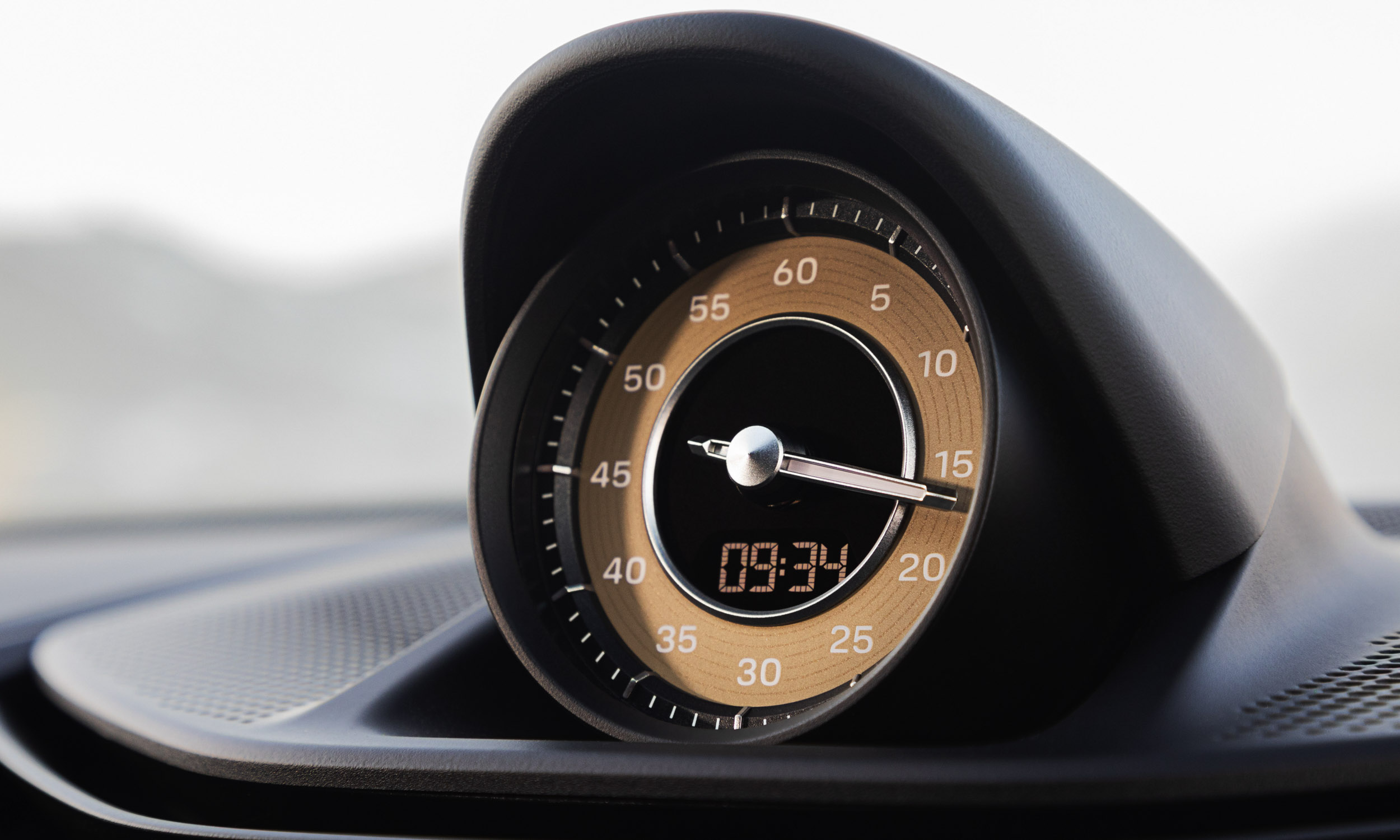 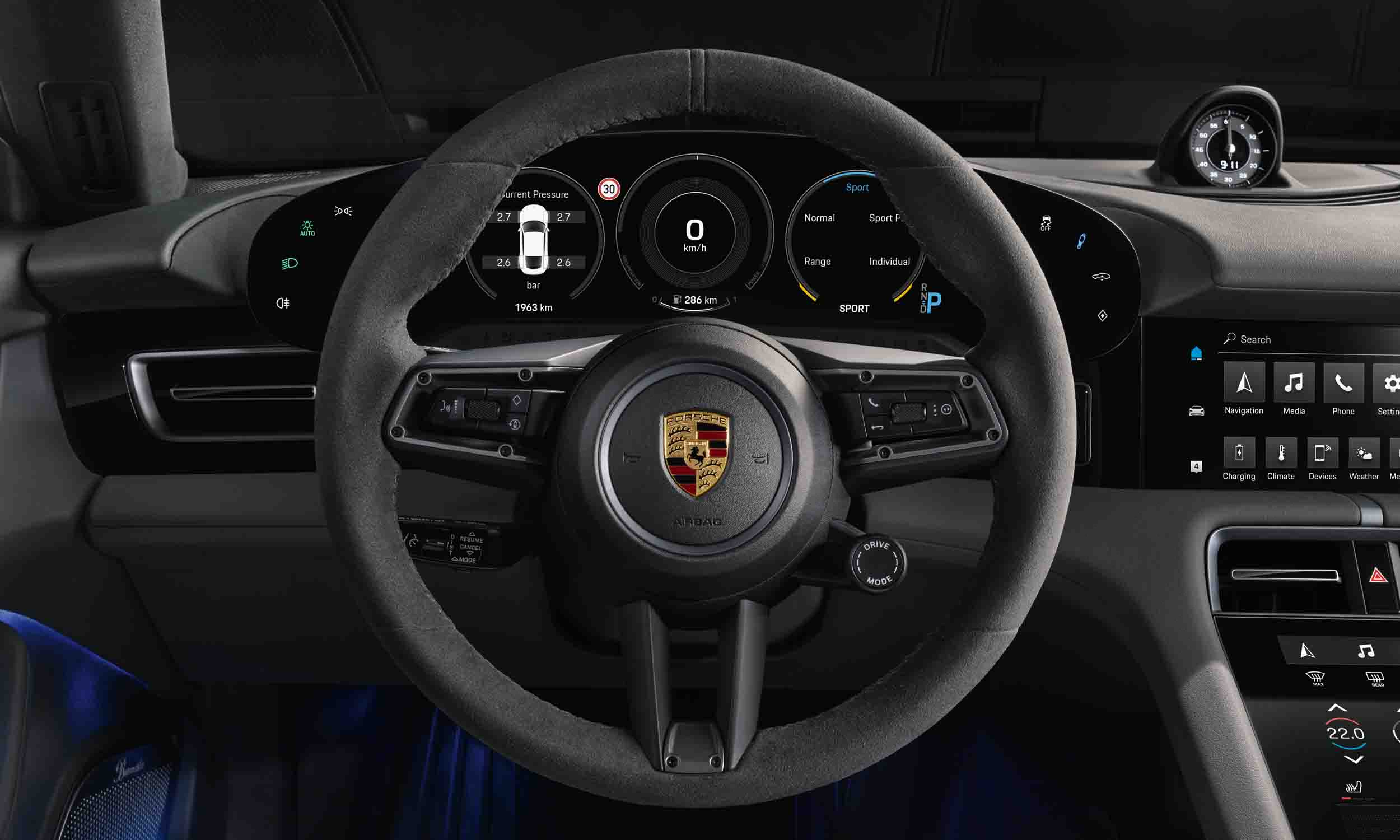 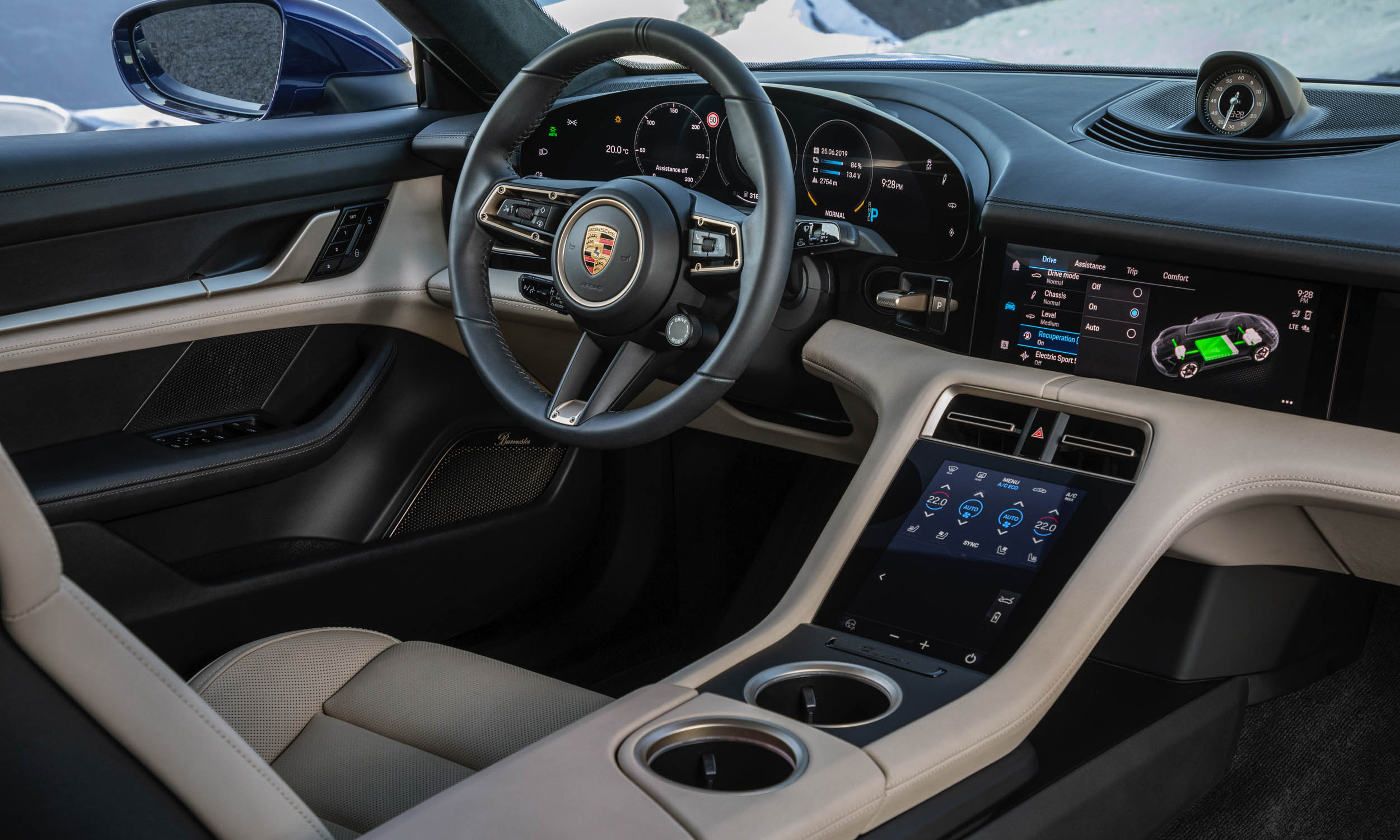