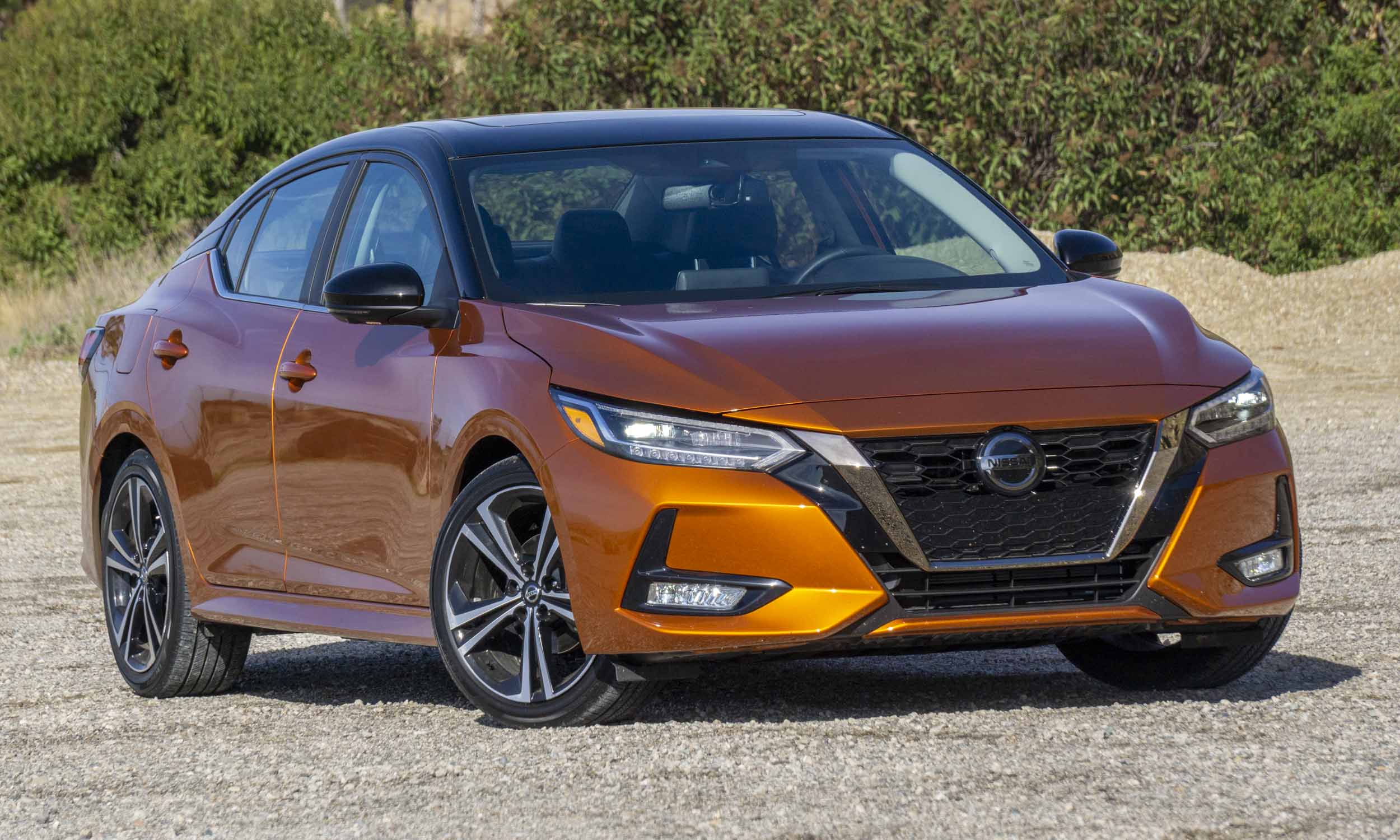 Stand By Sedans
Japanese automaker Nissan holds fast to the belief that sedans will continue to have a place in the American car market. Several major car companies have forgone this traditional means of transportation in favor of more popular crossovers, but in spite of that Nissan introduces the all-new Sentra, which now completes a full refresh of its sedan lineup that includes Versa, Altima and Maxima. With styling that matches the rest of its siblings, the 2020 Nissan Sentra enters the new model year with added safety features, more power, better handling and a range of improvements. 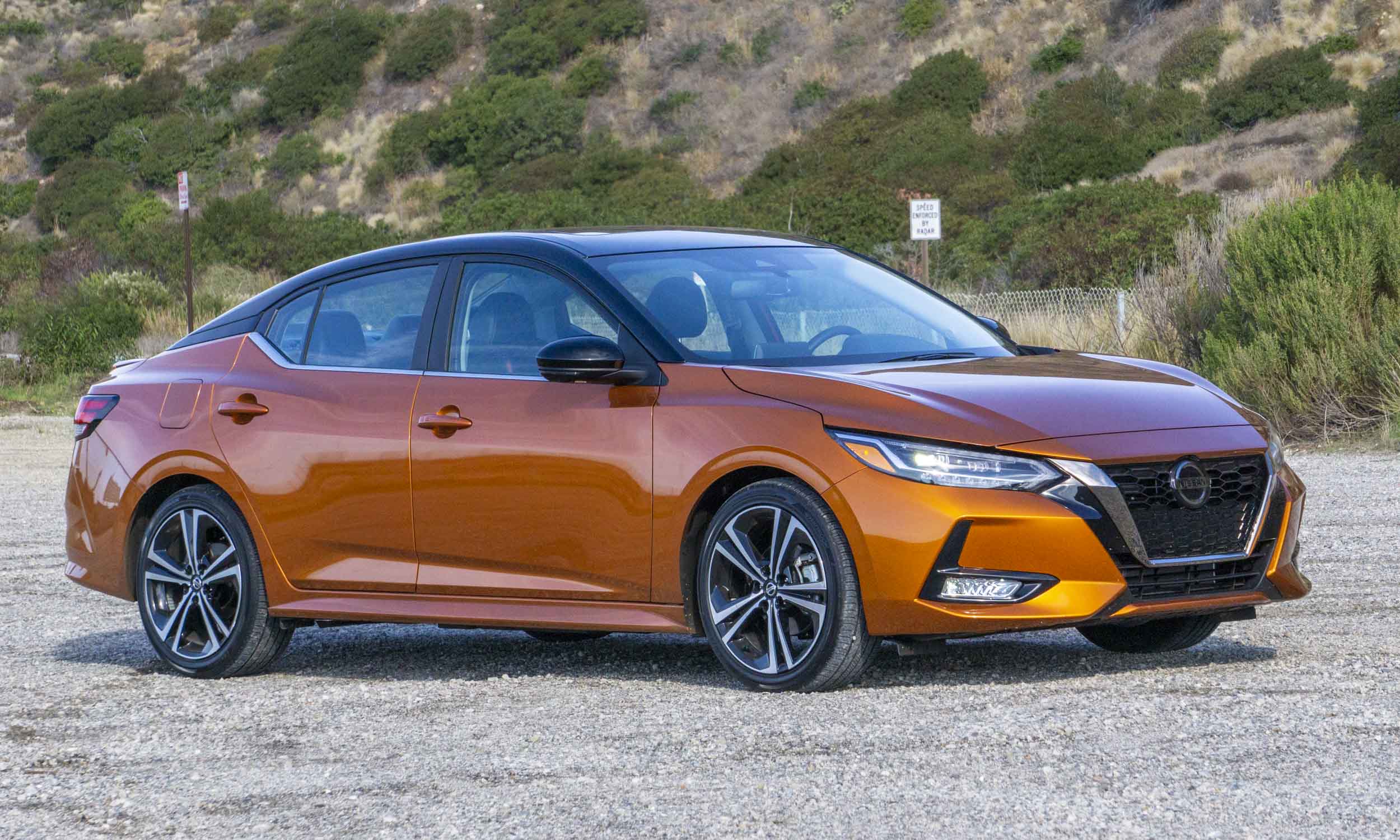 Best-Seller
Sentra is one of the most recognized names in the Nissan lineup. Introduced 37 years ago, this small car is now starting its 8th generation. According to Nissan, more than six million Sentras have been sold, making it the best-selling Nissan model in America. 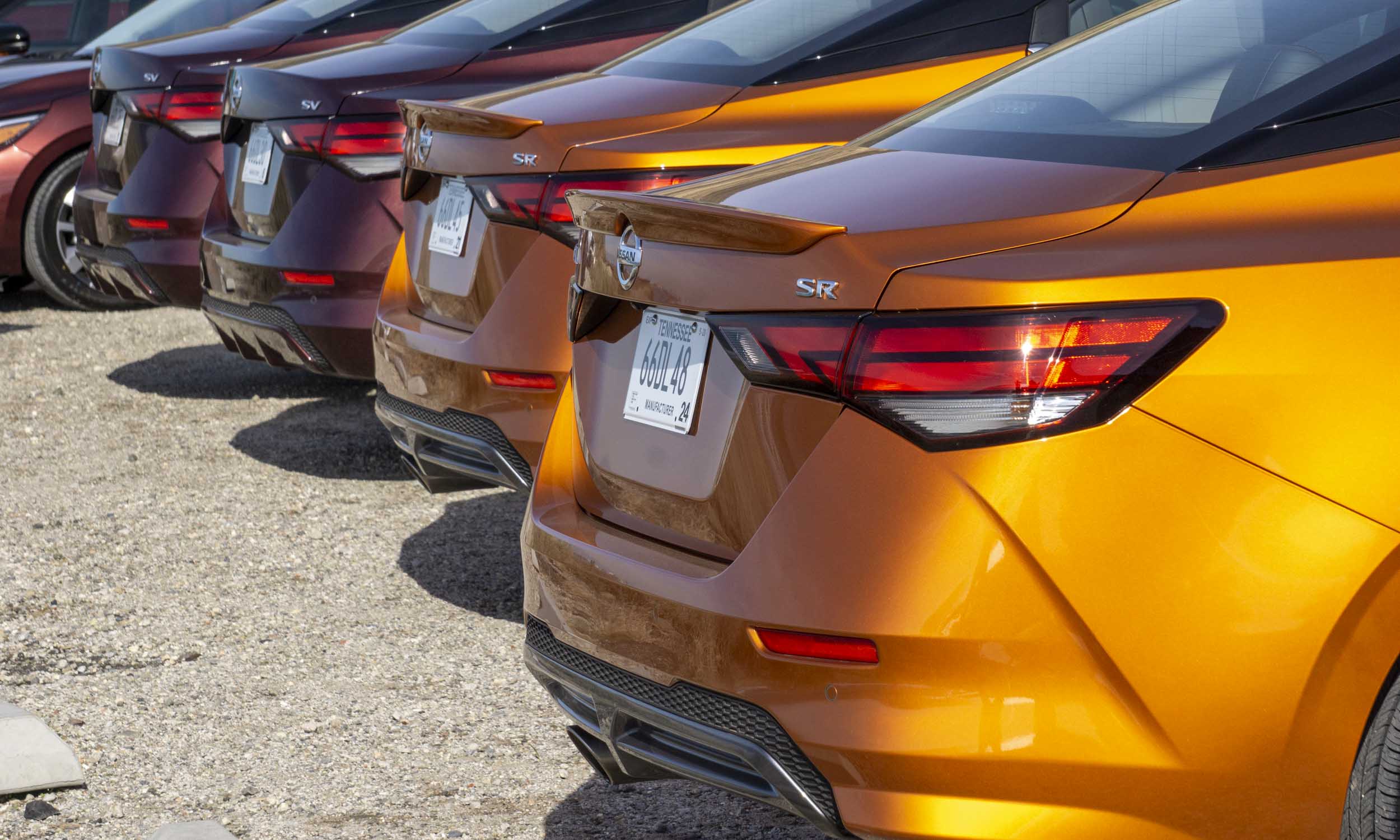 Model Lineup
The 2020 Nissan Sentra is available in three trims: S, SV and SR. To simplify the ordering process, Nissan is only offering a single option package on the SV and the SR. In addition, two-tone paint is available on the Sentra SR. 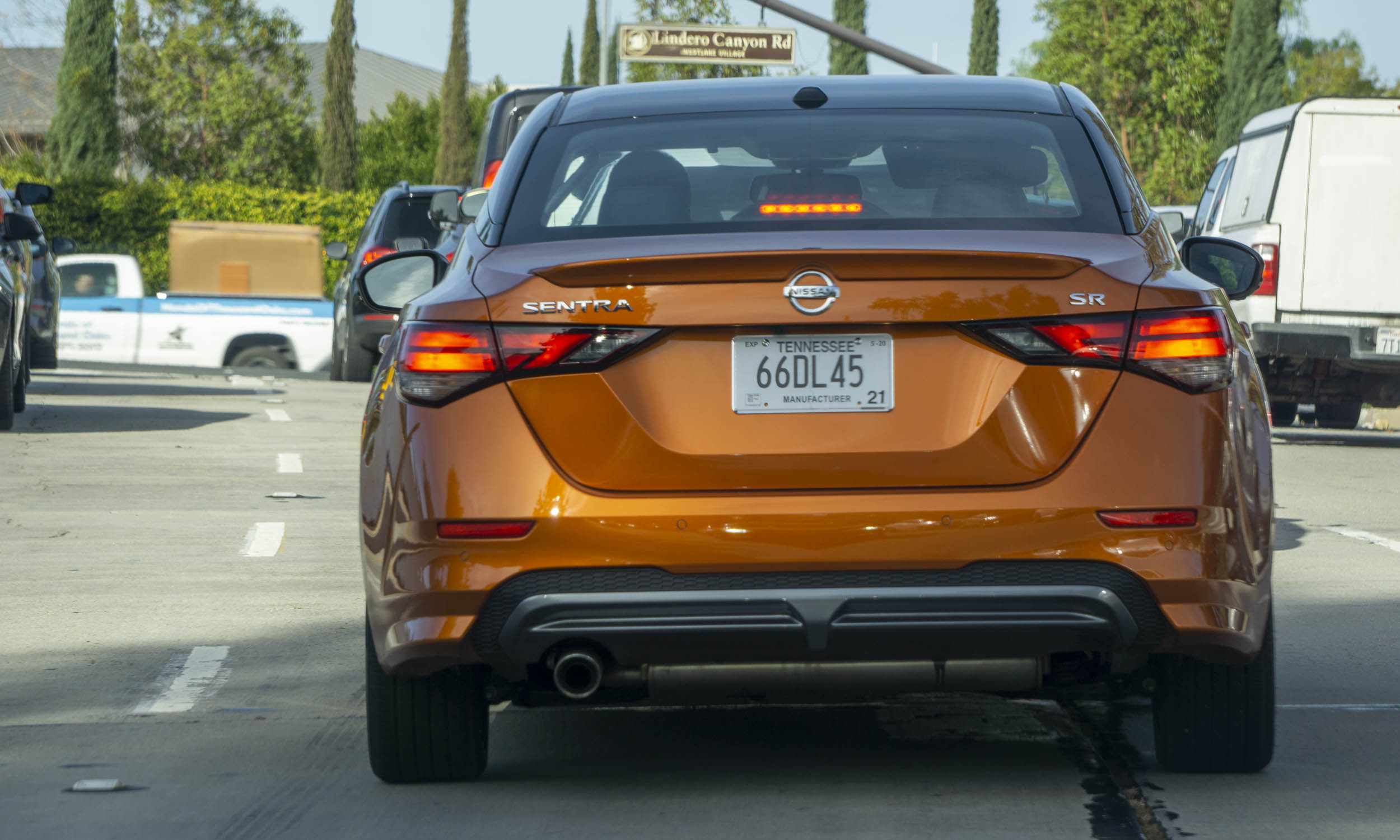 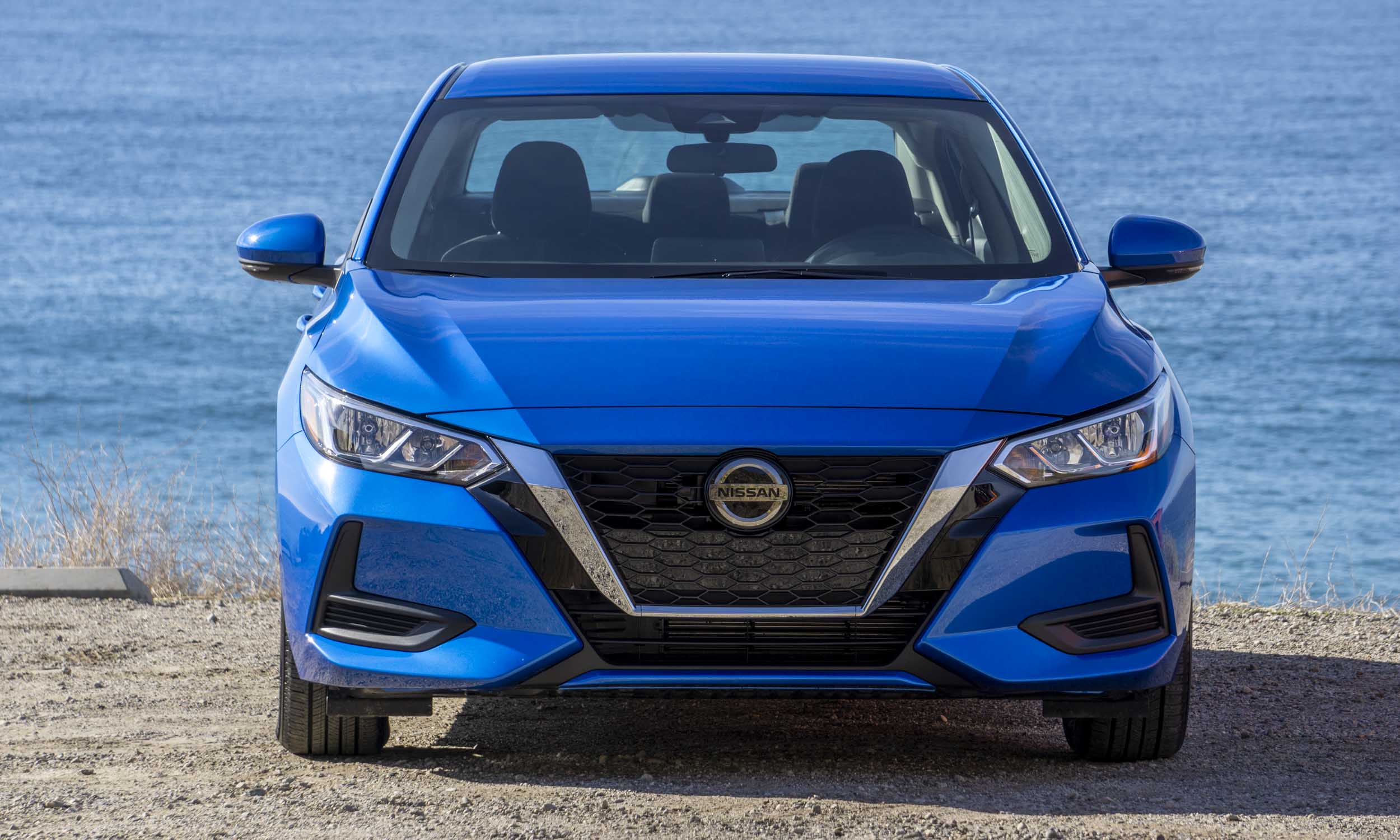 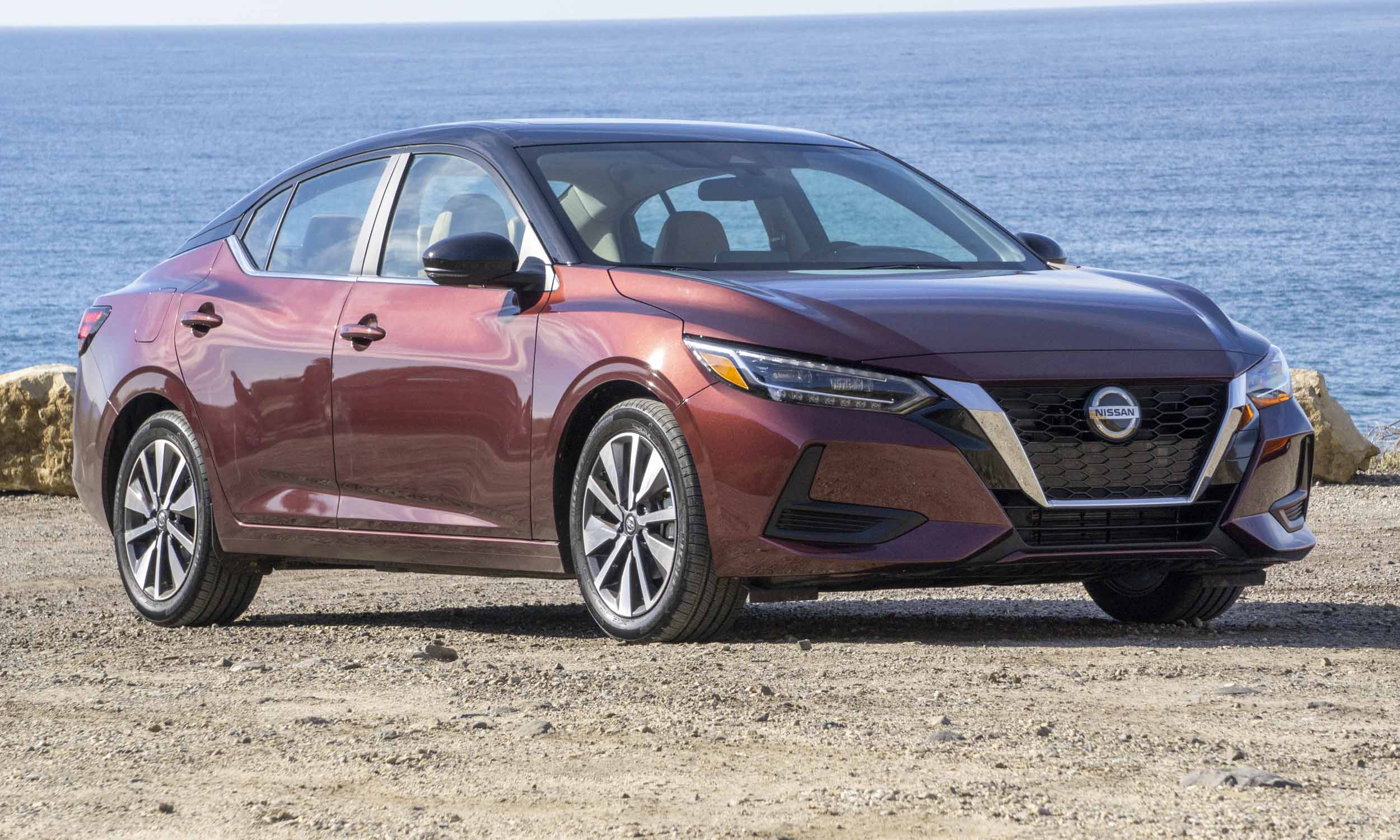 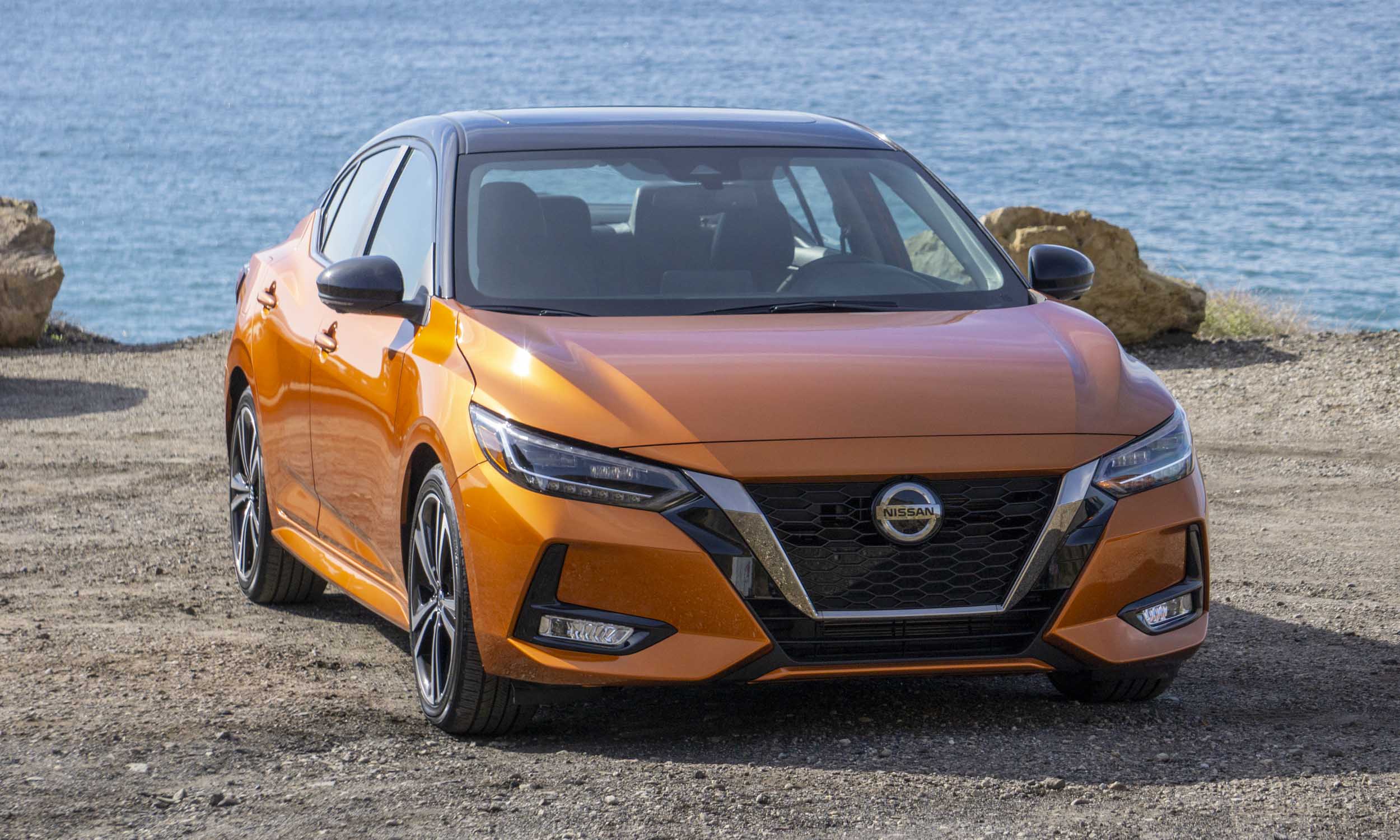 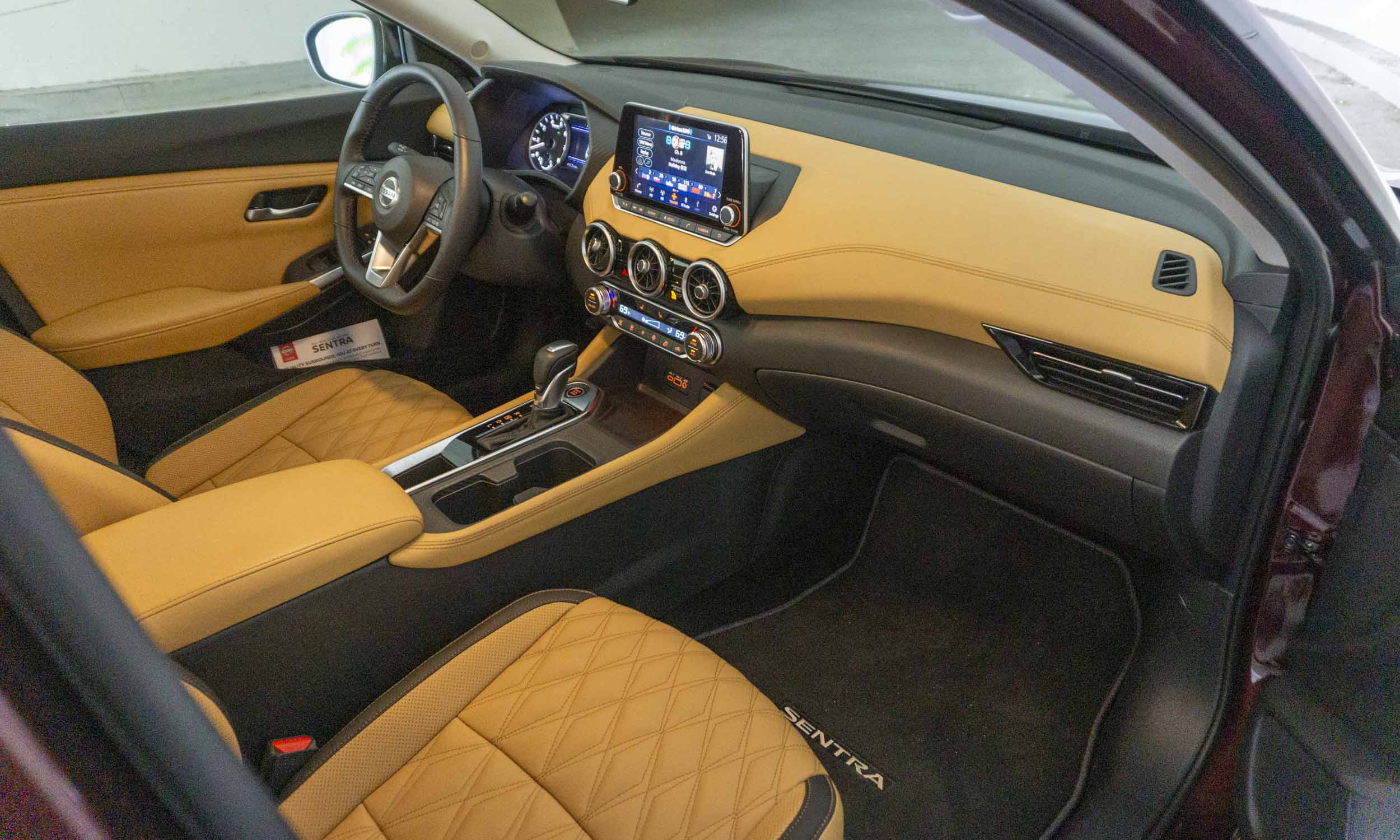 Inner Space
Even though the Sentra’s exterior styling has improved significantly over the previous generation, the interior revisions really stand out. The large display screen, sporty flat-bottom steering wheel and available leather trim give the Sentra a premium look — features not usually anticipated in a car priced around $20,000. There’s plenty of space for storing electronic devices and other personal items, with multiple USB ports available. 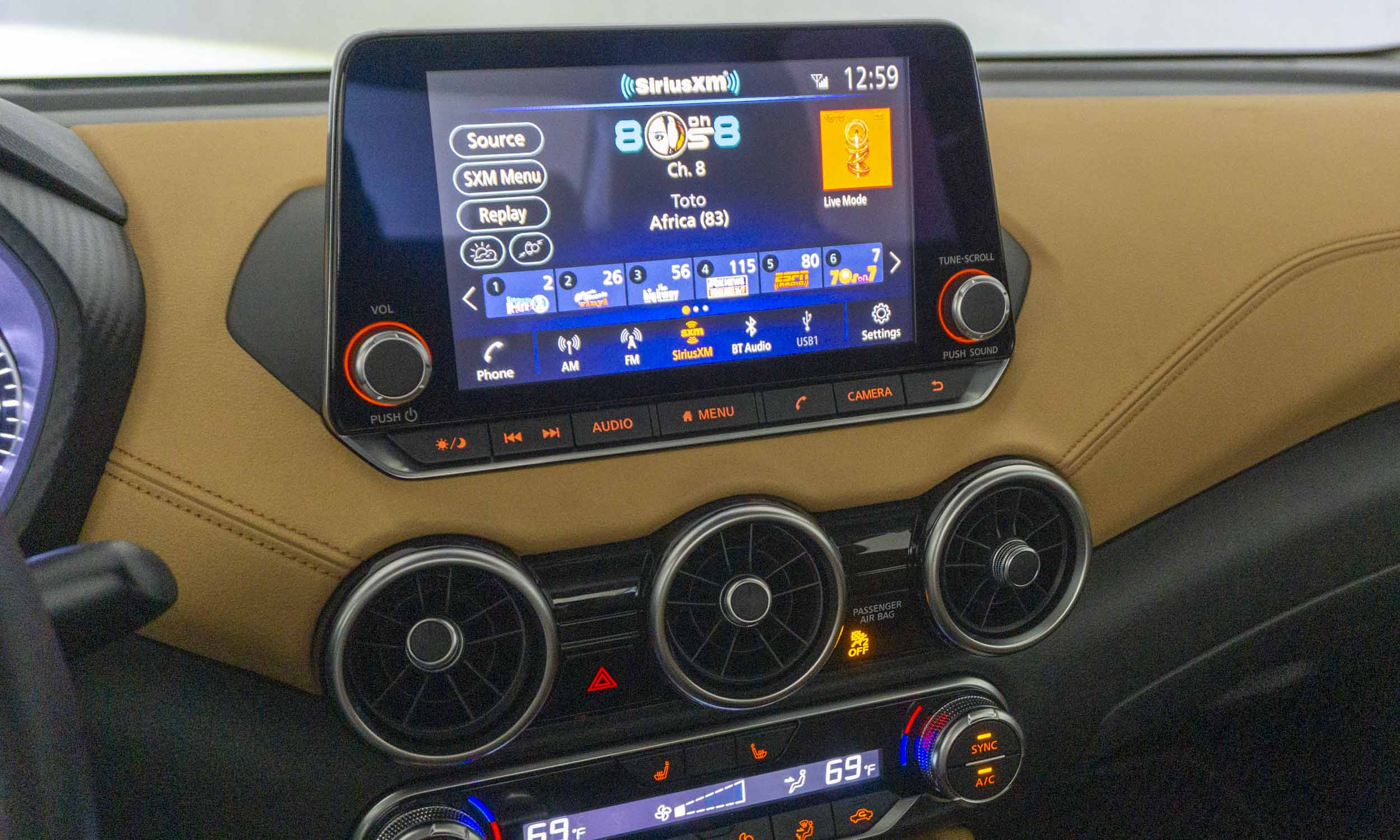 Infotainment
Nissan’s infotainment system is one of the more intuitive on the market, featuring easy access to phone and audio settings. Hard buttons and knobs for volume, tuning and other menu items are welcome additions. Climate controls are also very straightforward as separate controls. Navigation is not an option on the Sentra; however, with Android Auto and Apple CarPlay integration, most consumers will be able to use their mobile devices for GPS navigation, so Nissan made a wise cost-saving choice to assume most drivers will bring their own nav into the Sentra. 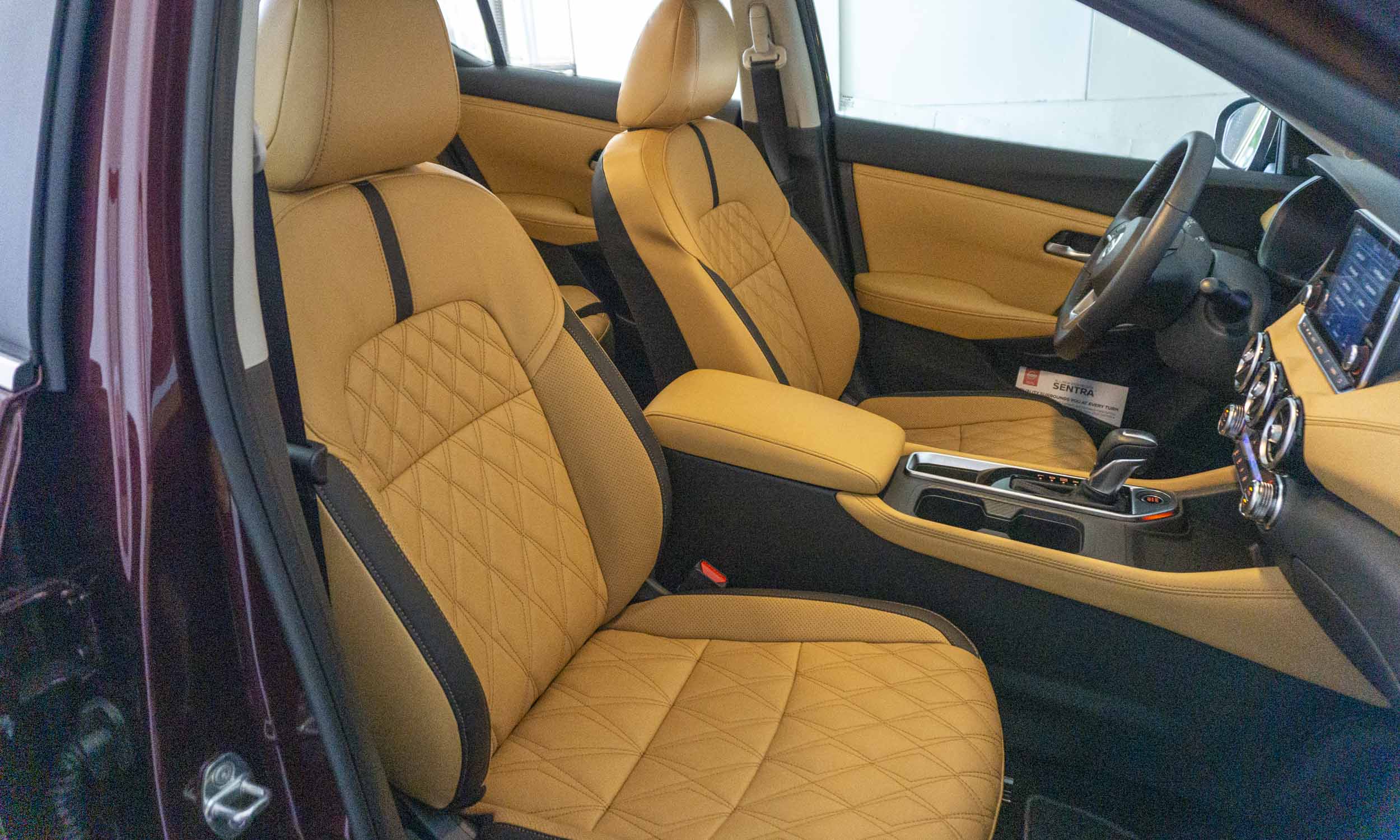 Front Seats
Seats up front are comfortable with nice support for all trim levels and all materials, thanks to Nissan’s Zero Gravity seat construction. The Sentra SV with the Premium Package stands out with quilted leather seat trim and two-tone treatment — quite a shock the first time we saw this high-end interior in a Sentra. 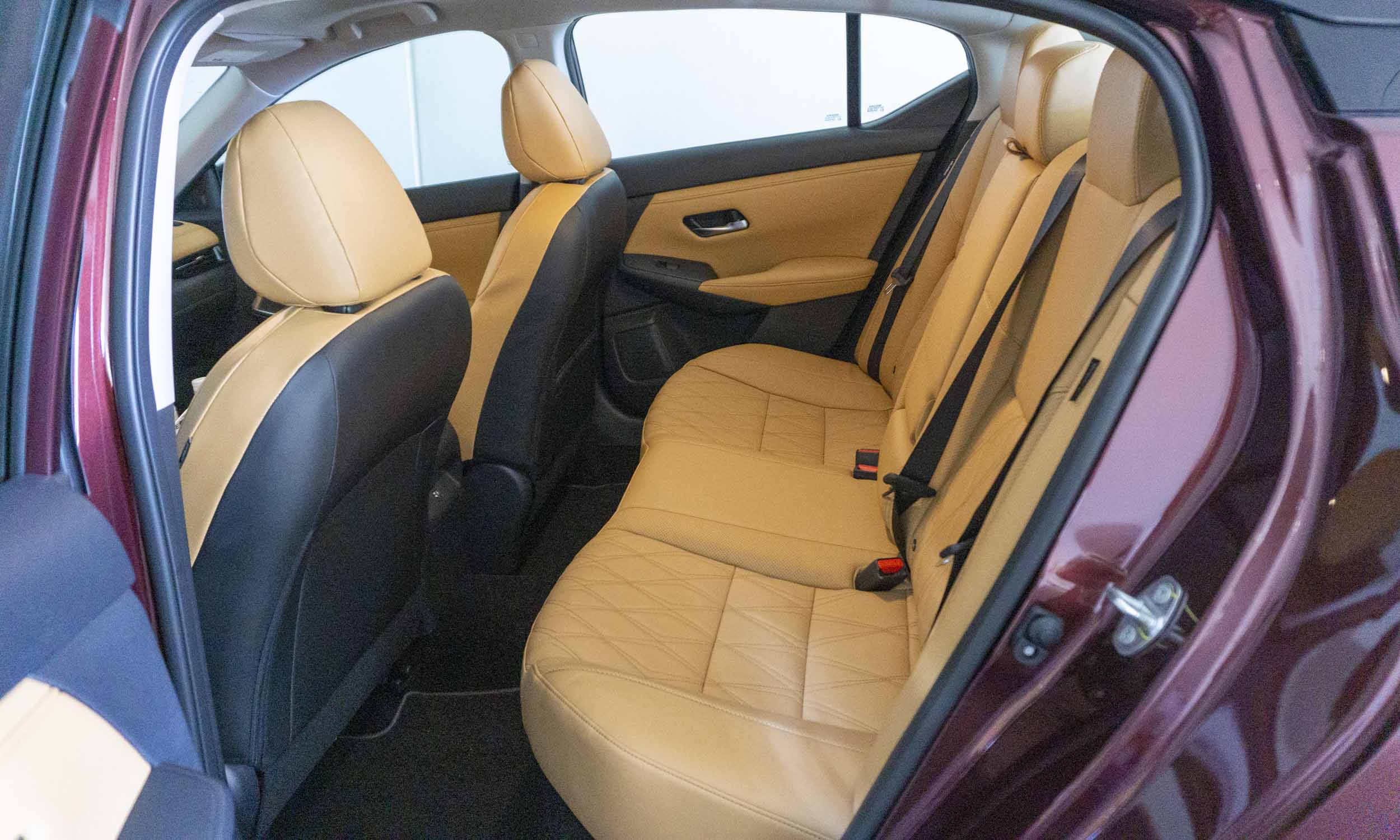 Rear Seat
Despite the new Sentra being slightly longer and wider than its predecessor, the rear seat carries over the same legroom and headroom. Two adults would be able to travel in back, but it is a bit tight — especially if the front-seat occupants haven’t adjusted their seats forward. And as it would be in any smaller vehicle, the Sentra’s rear middle seat should be reserved for children. 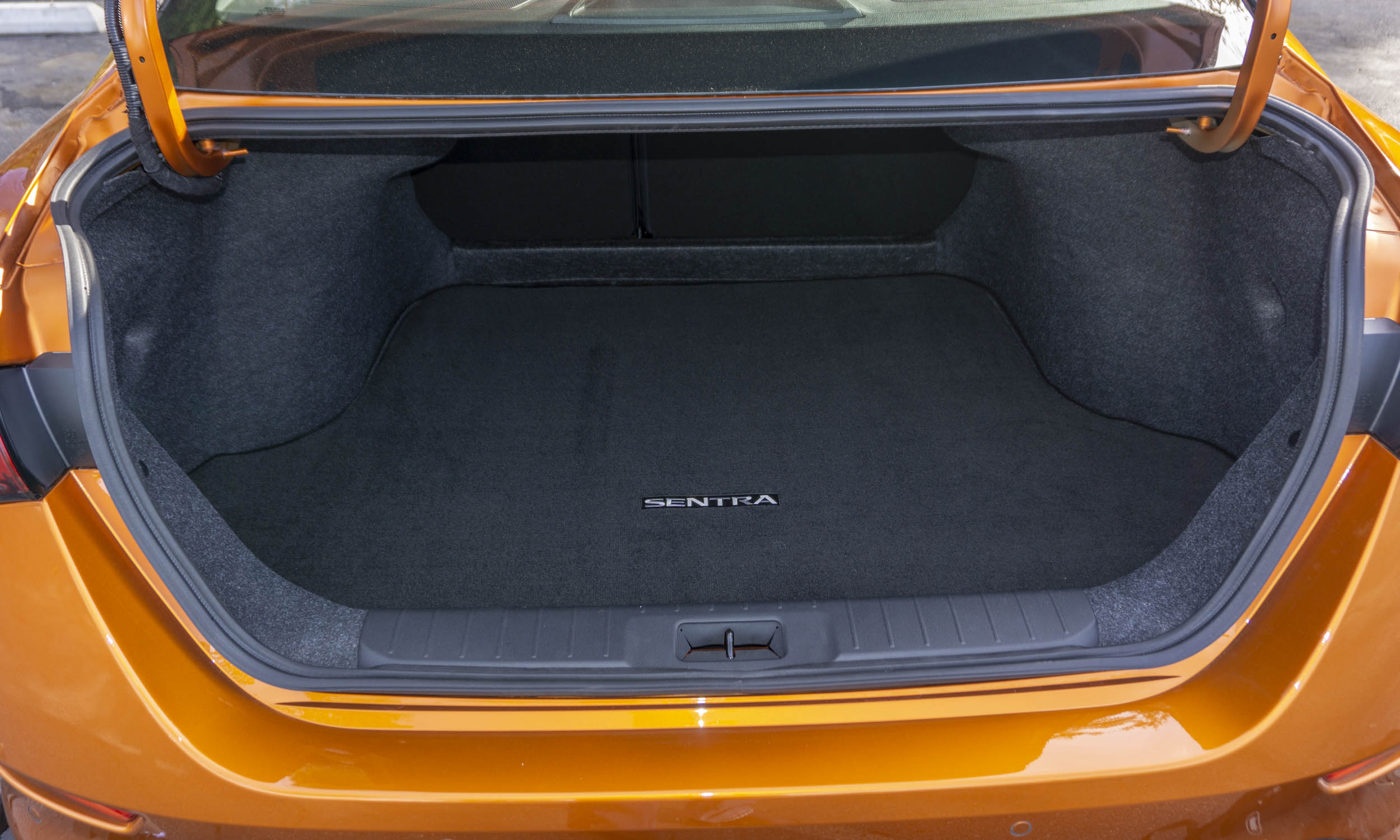 Trunk
The new Sentra offers a rather spacious trunk with enough room for a couple of suitcases or several bags of groceries. Rear seats can be folded flat in a 60/40 configuration for additional cargo versatility. 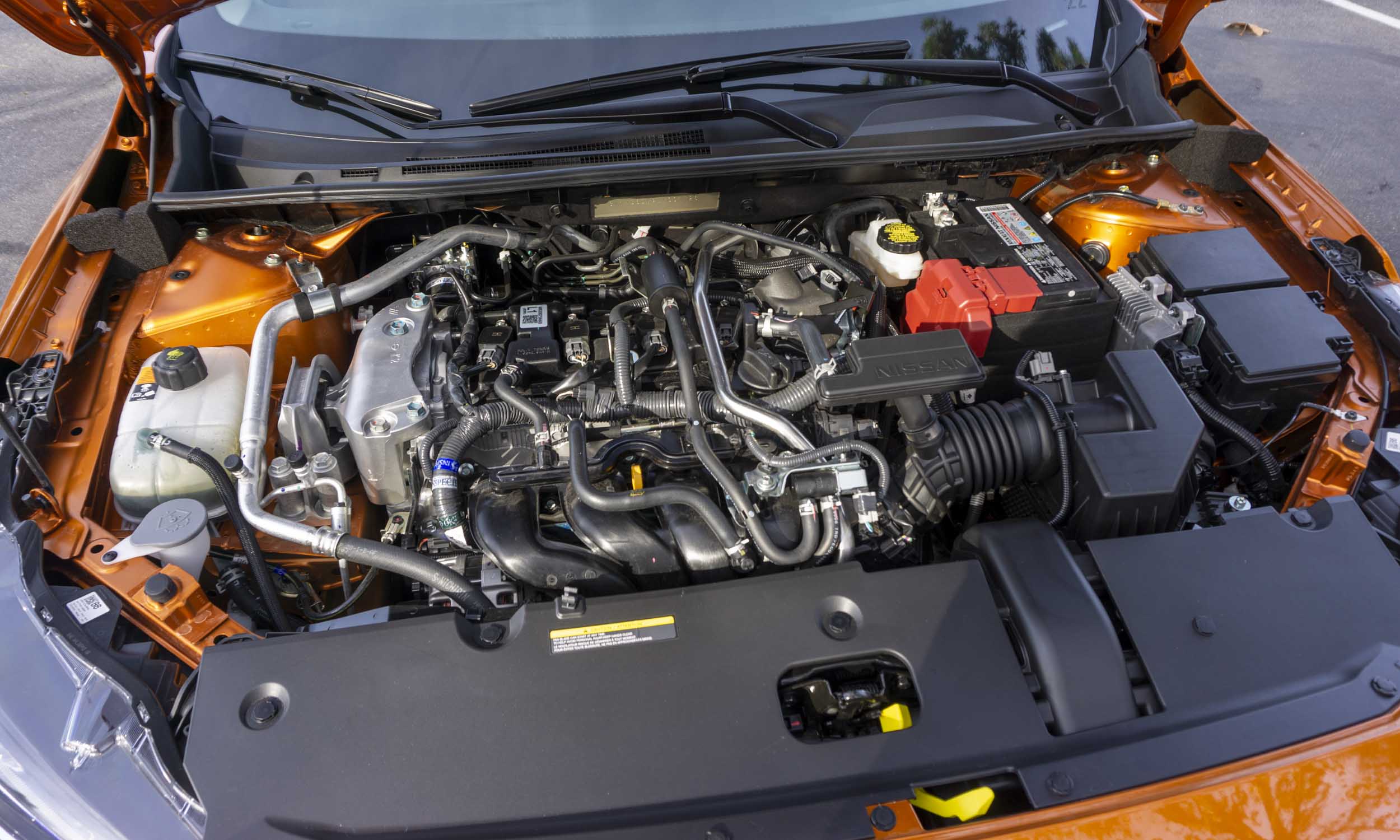 Under the Hood
All 2020 Sentras get the same powertrain: a new 2.0-liter 4-cylinder engine producing 149 horsepower and 146 lb-ft of torque. This bump of 25 horsepower over the previous generation adds more torque as well. Nissan equips almost all its vehicles with a continuously variable transmission; however, the new Sentra has the latest-generation CVT that features a step-shift program for a more satisfying drive. Fuel economy improves over the previous generation as well — Sentra has EPA fuel-economy ratings of 29 mpg city / 39 mpg highway. Fuel economy is slightly lower for the SR at 28 mpg city / 37 mpg highway. 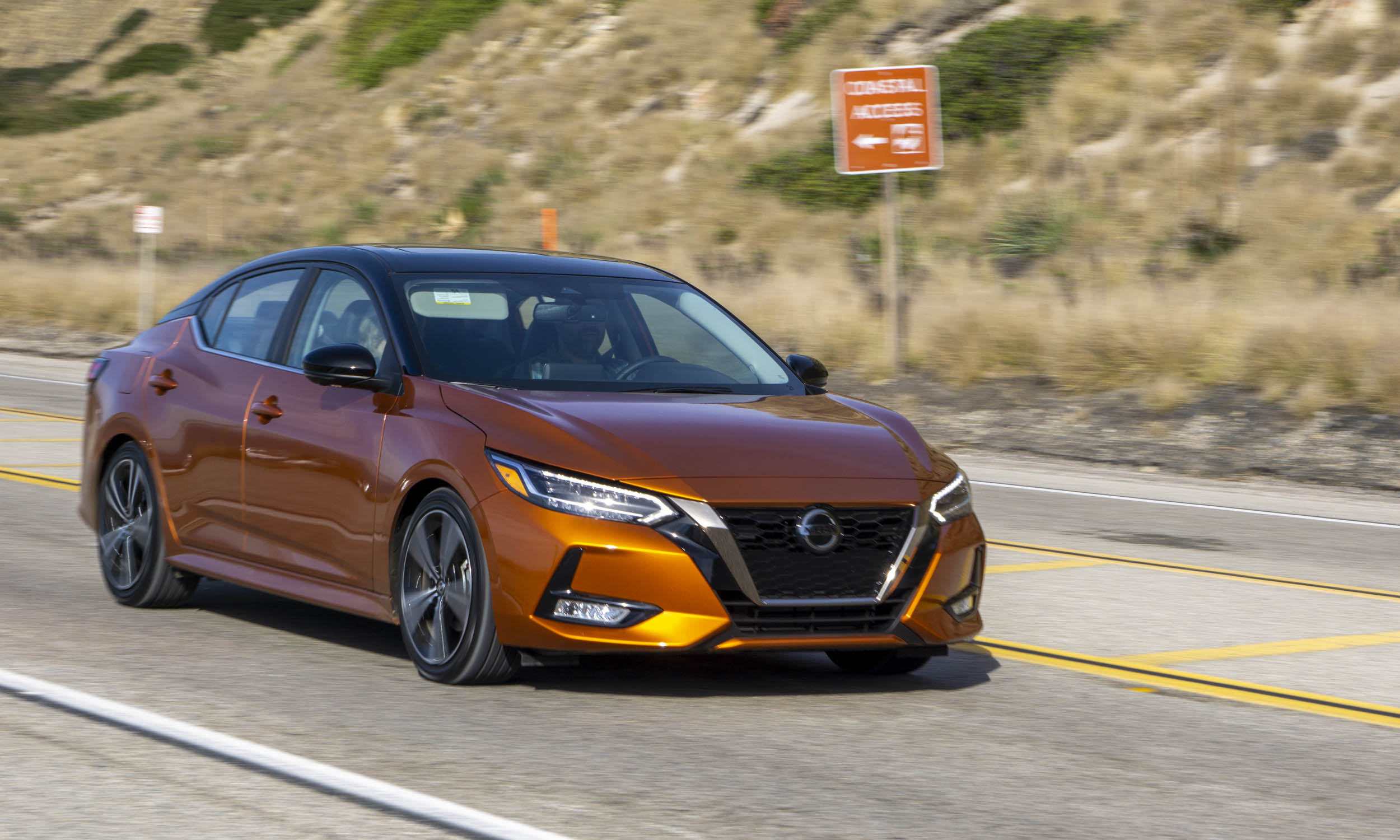 On the Road
Just a few weeks after the all-new Sentra debuted at the L.A. Auto Show, Nissan invited a few auto journalists down to Southern California for some seat time in this new sedan. Driving around town, the new Sentra’s ride is solid and smooth — another pleasant surprise for a car that starts under $20,000. Some road noise permeates the cabin when the street surface isn’t perfectly smooth, but for the most part the Sentra is — shall we say — quite quiet. 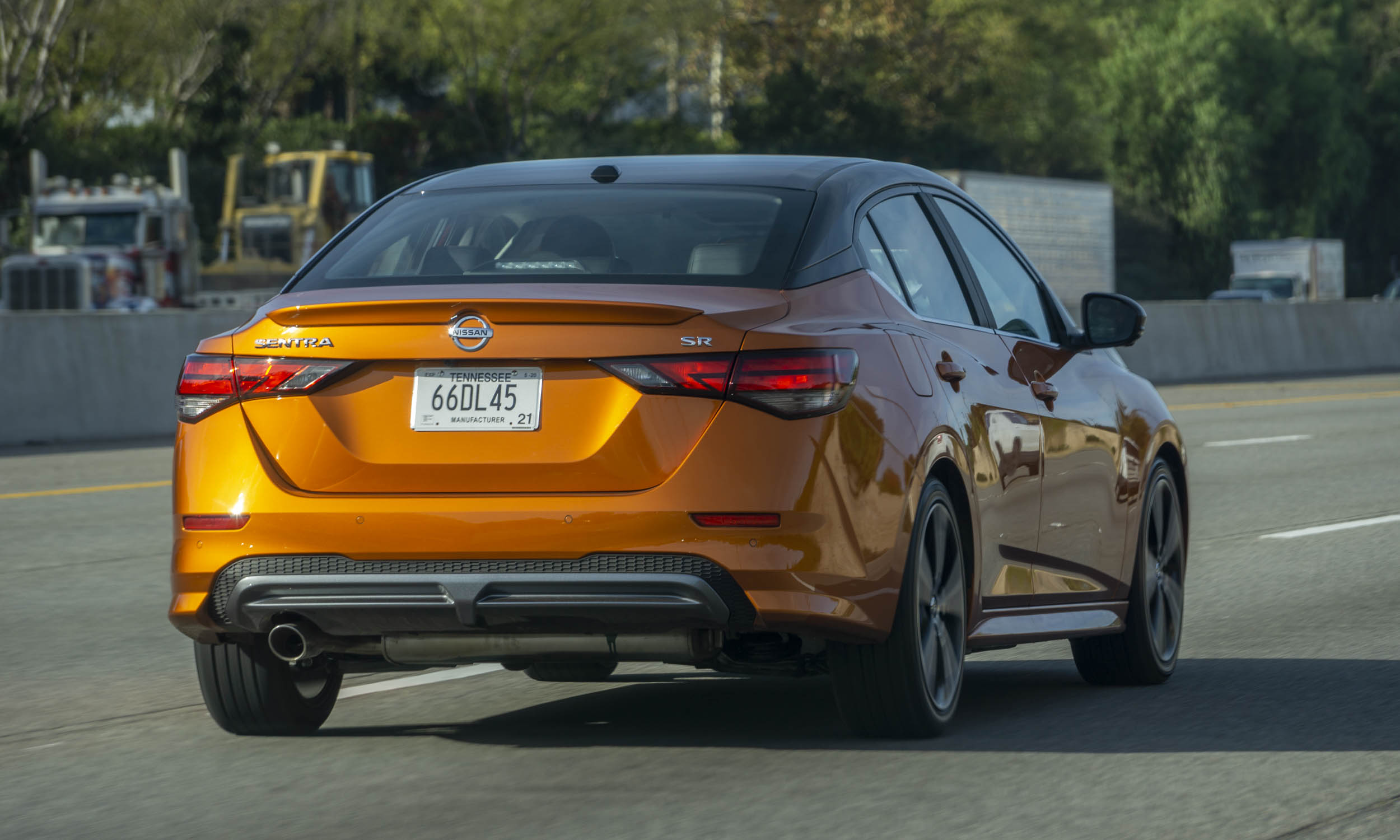 Cruising the Freeway
For a small car with a small-displacement engine, the Sentra handles highway speeds without any issues. The ride is comfortable and stable, even when moving past 70 mph. Visibility is good, and we like that the lane departure warning simply vibrates the steering wheel rather than sounding an audible beep, which can get annoying. 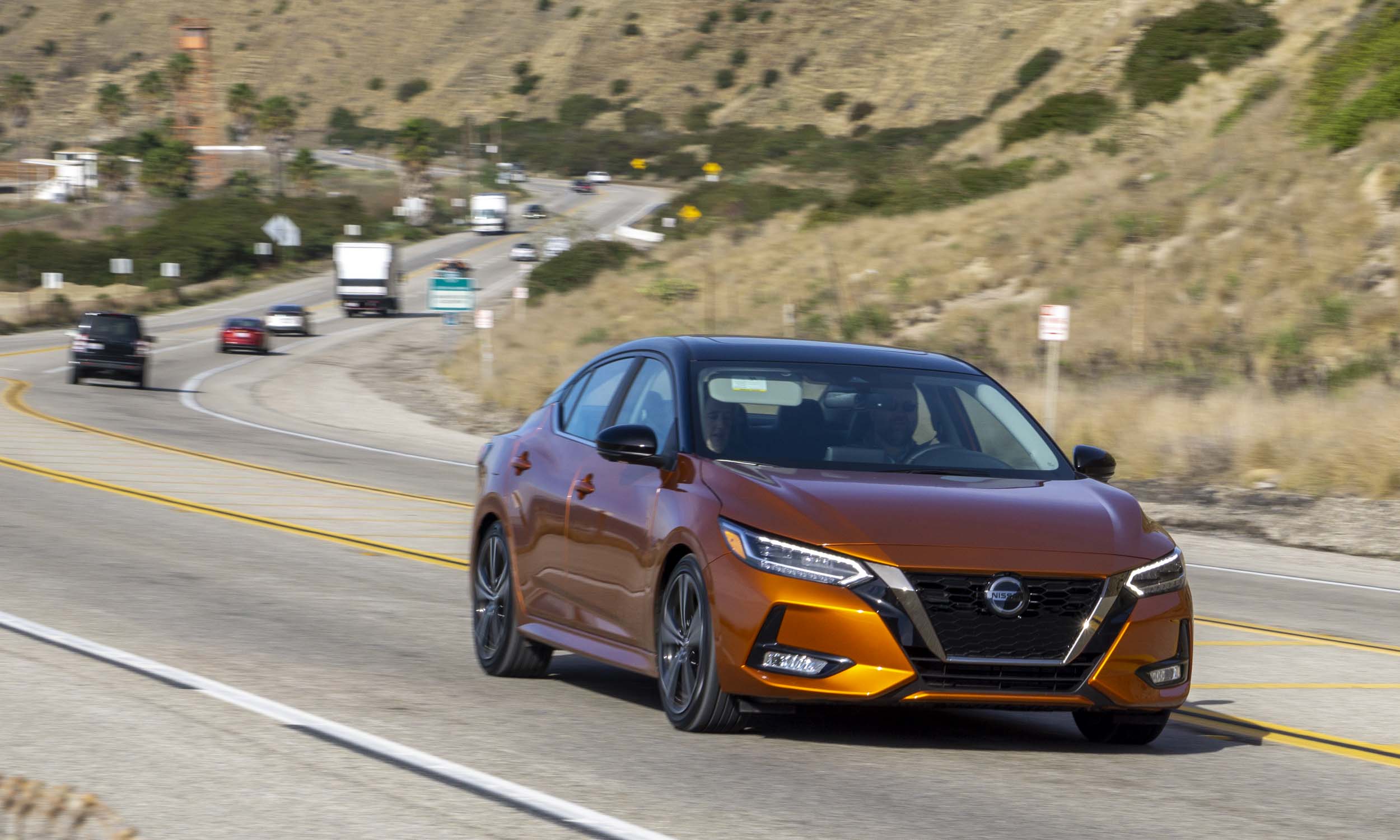 Power and Handling
Although the Sentra is no sports car — nor is it trying to be —the added horsepower of the new engine is certainly welcome. Acceleration is more than adequate, and the shift-simulating CVT works well, making it considerably less annoying than a typical CVT. With a wider chassis and lower center of gravity, the Sentra holds its own when the road gets winding. Steering is precise, and Nissan has equipped the 2020 Sentra with an Active Understeer Control system that helps with stability when going into a corner too quickly. The system detects the turn and applies braking to the inside front wheel to help the car turn in. 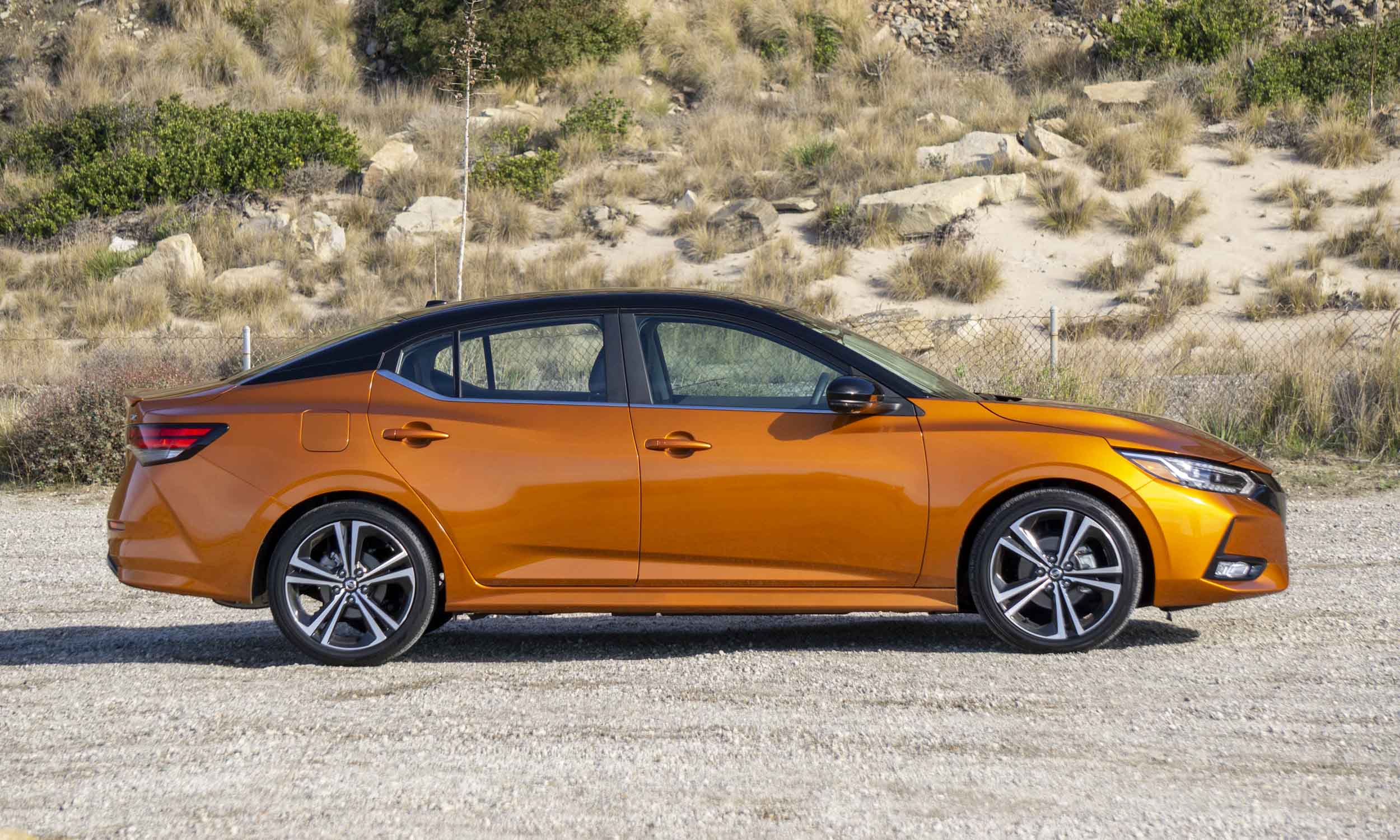 Right for You?
Competition has become exceedingly tough in the small car segment thanks to stalwarts such as the Toyota Corolla and Honda Civic battling for sales. However, the new Sentra has a lot to offer in this category with a stylish interior, fuel-efficient powertrain, nice driving dynamics and a very usable infotainment system and interface. With a fully loaded Sentra topping out under $24,000, this small sedan is a great value. We expect this new Sentra will easily hold onto its position as one of the best-selling cars in America. 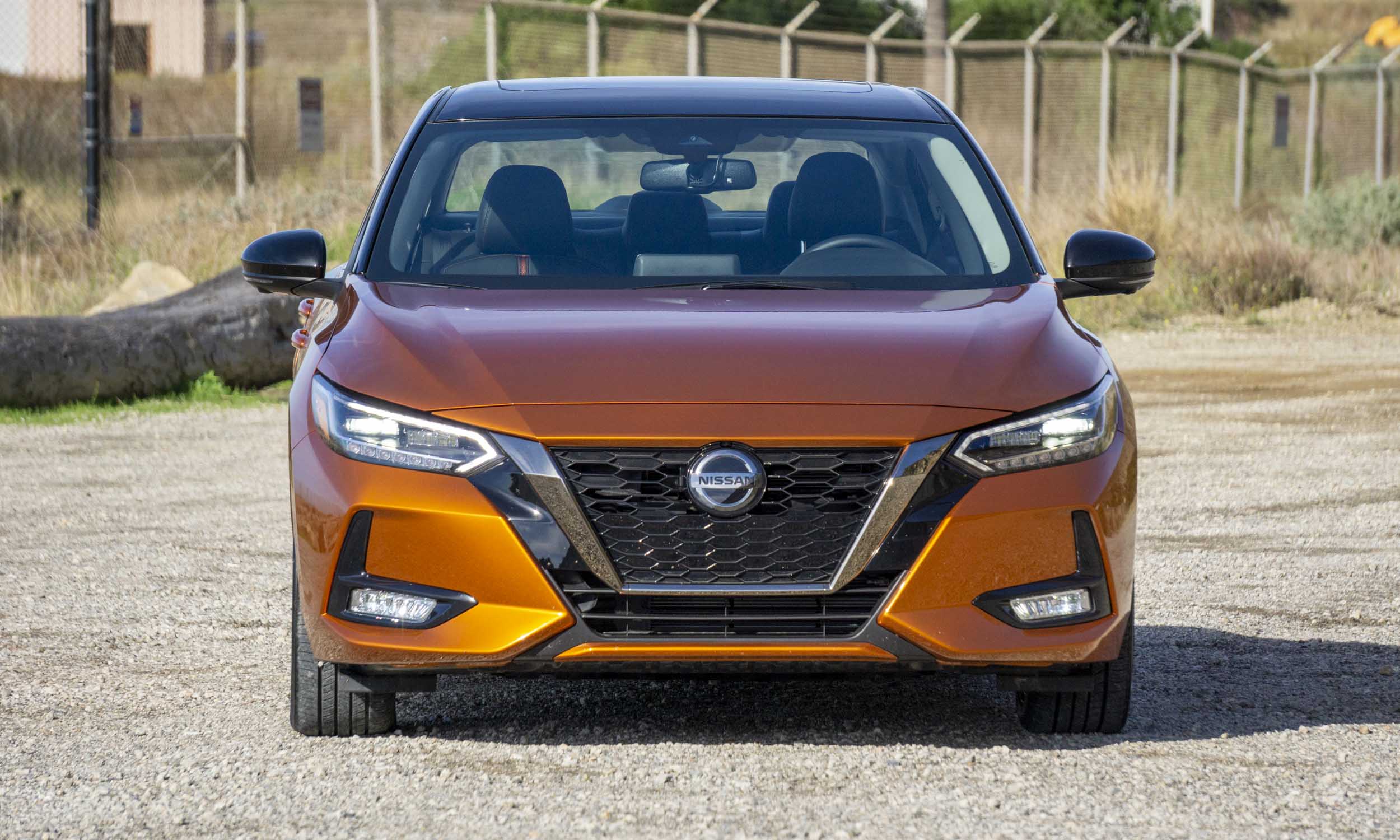