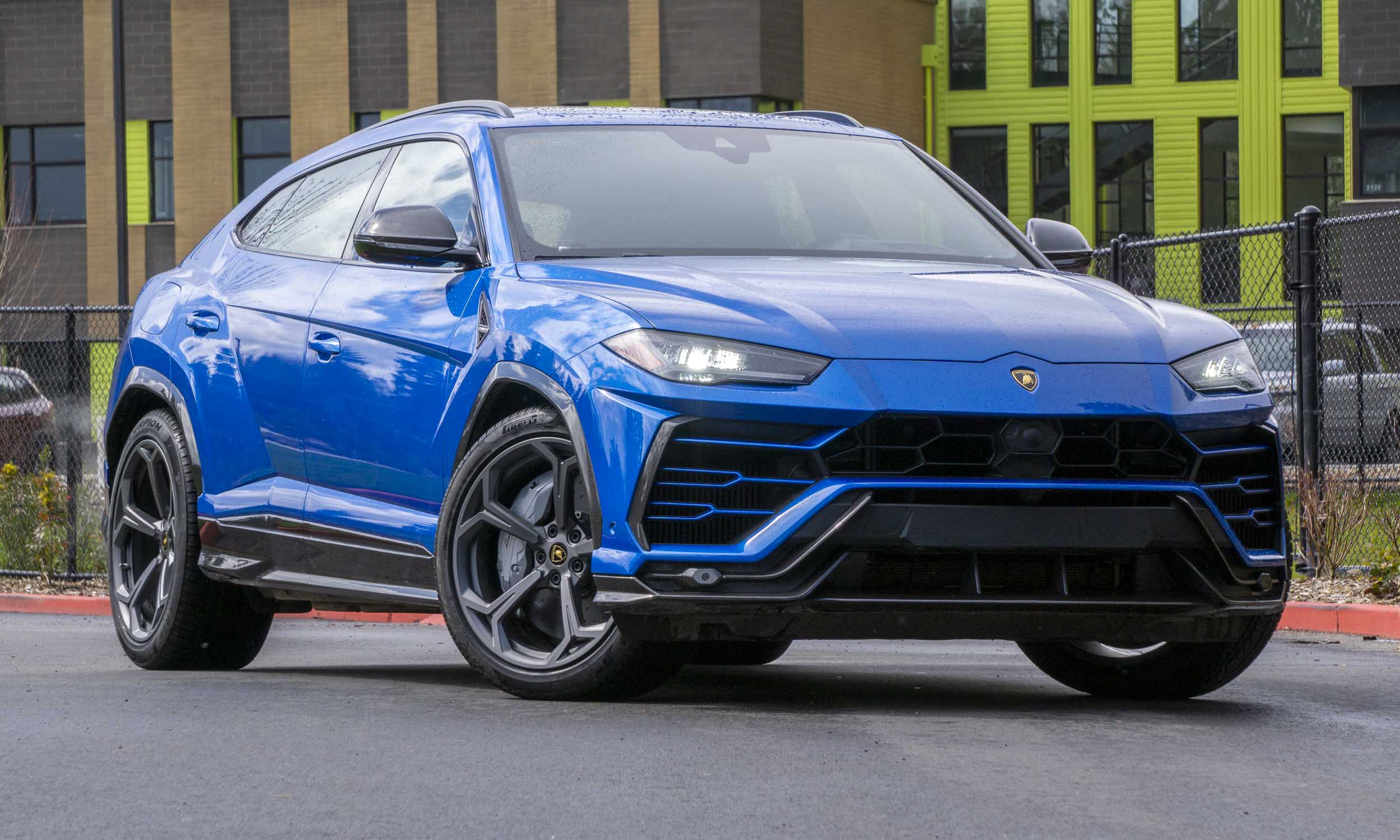 2020 Lamborghini Urus
Well known for building exotic super cars such as the Huracan and Aventador, Lamborghini added an SUV to its lineup for 2018: the powerful Urus. The Italian automaker refers to the Urus as a “Super SUV” — if a Huracan is a supercar, then super SUV seems like an appropriate moniker for Urus. In the company tradition of naming cars after bulls, this SUV takes its name from the wild ancestors of domesticated cattle. With the utility of a proper SUV but the performance and style of a Lamborghini, the 2020 Lamborghini Urus is certainly unique in the market. 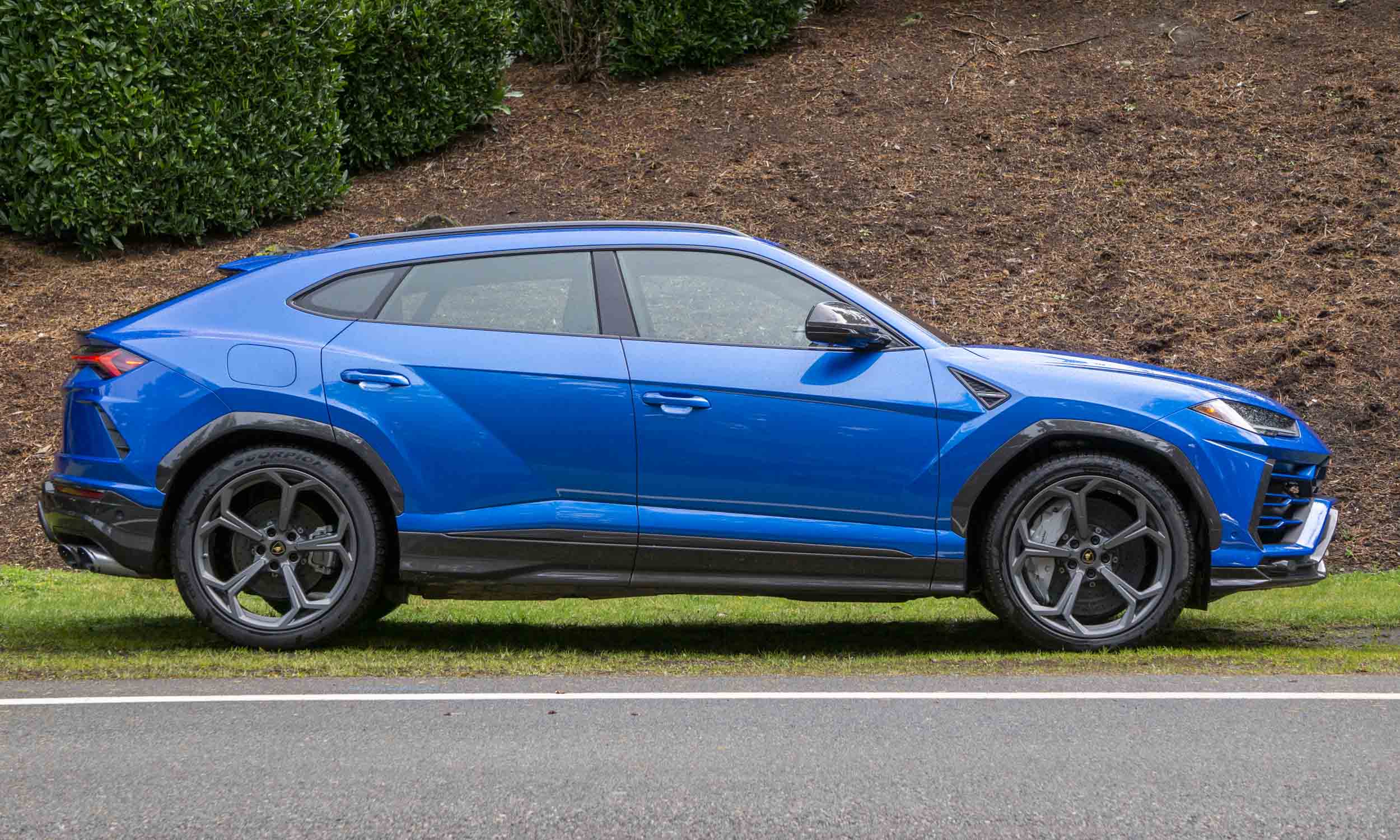 Test Vehicle
Lamborghini was kind enough to loan us a 2020 Urus painted in Blu Eleos. Although the Urus does come well equipped — as it should, given the price — our test vehicle had a very long list of optional extras. Options included upper and lower carbon fiber trim, Nath 22-inch Titanium Matte wheels, an ambient light package, advanced 3D Bang & Olufsen sound system and floor mats with leather piping for a total MSRP of $270,034. Competitors to the Urus include the Bentley Bentayga, Porsche Cayenne Turbo S, Jeep Grand Cherokee Trackhawk and Mercedes-AMG GLE 63 S. 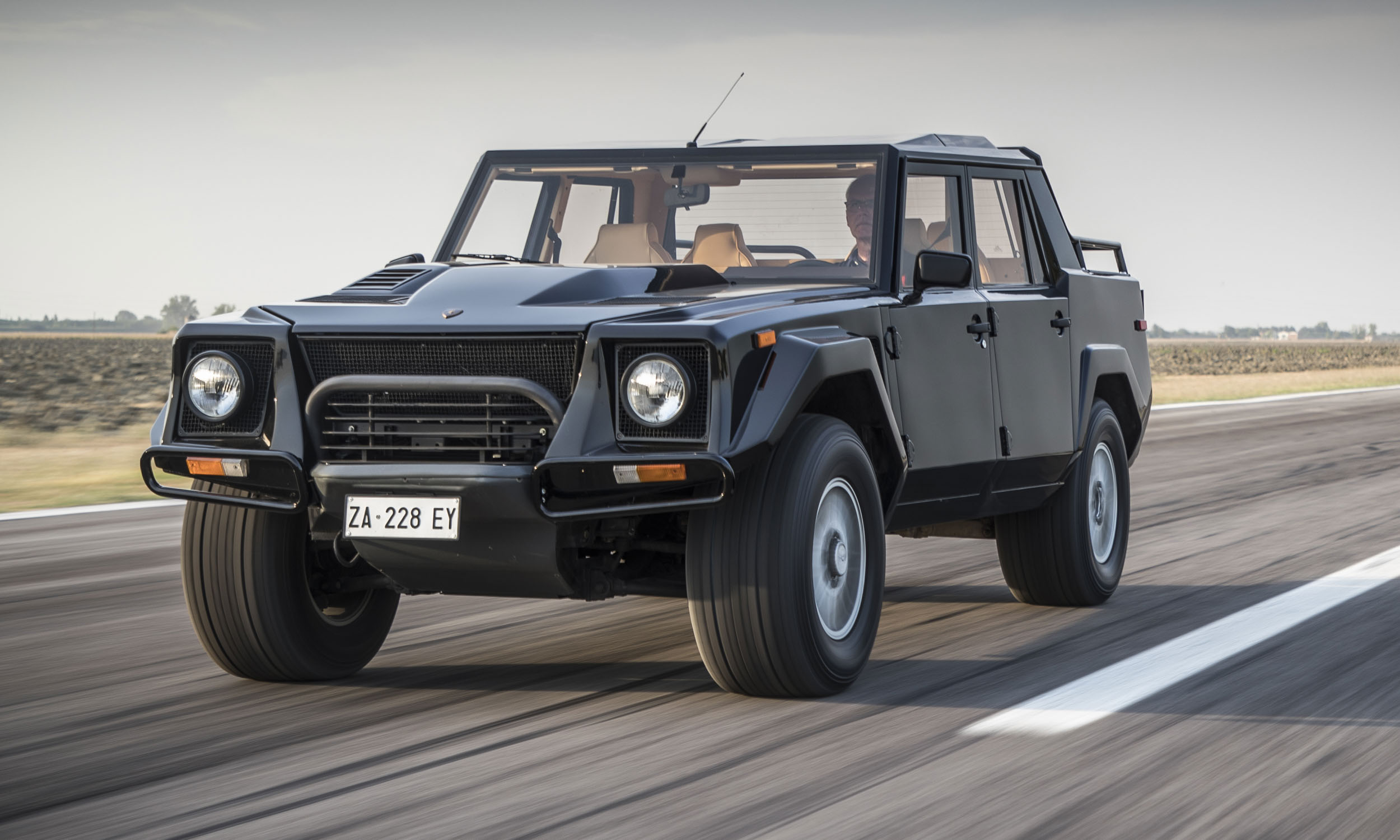 The First Lamborghini SUV
Although adding Urus to the Lamborghini lineup might seem out of place, it isn’t the first sport-utility vehicle from the Italian automaker. The Lamborghini LM002 debuted at the 1982 Geneva Motor Show, and the angular SUV eventually reached production in the late 1980s. The V12-powered LM002 is a true off-roader with big, custom Pirelli tires, and at the time it was unlike anything else on the road (other than the occasional Humvee). Only about 300 LM002s were built, and 25 years separate the end of its production and the introduction of the Urus. 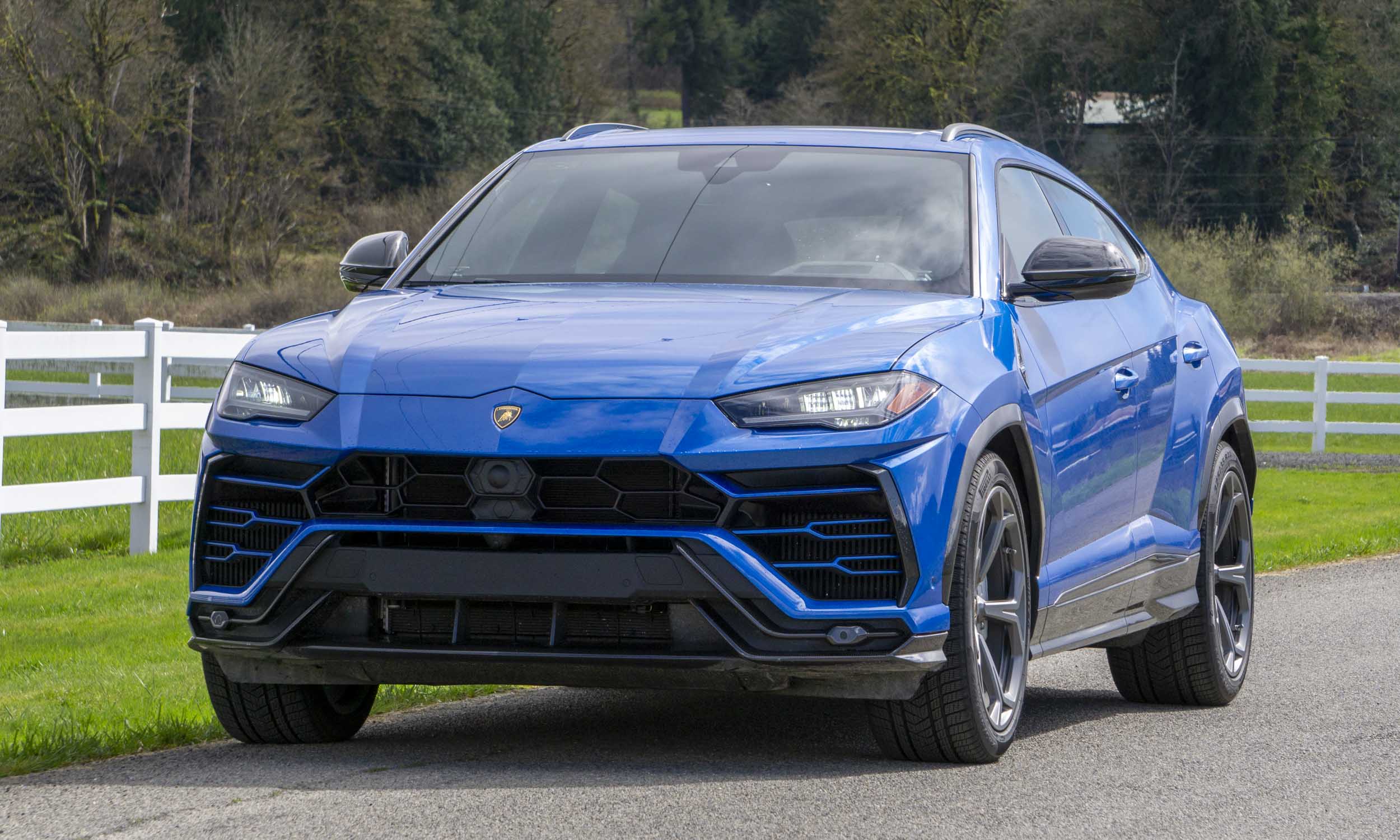 Styling
The Urus easily stands out on the road as something unique, but it can be difficult to translate the styling of a supercar to a super SUV. The big V8 engine needs a lot of air, so large vents adorn the lower grille, but the design around these is rather busy with body-color bars crossing the vents. Above is a sculpted hood that nicely integrates sleek LED headlights. 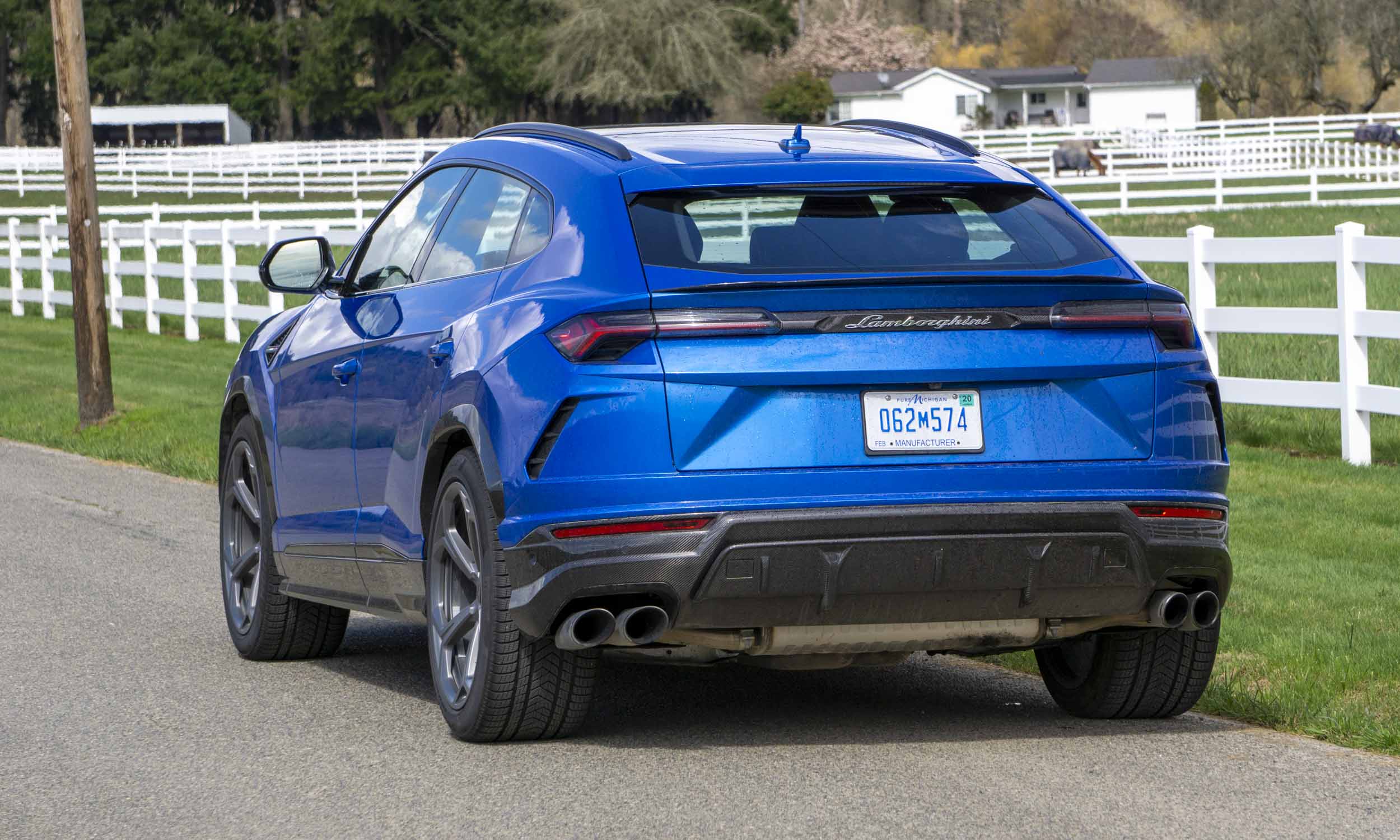 Rear End
Even though we’re not huge fans of the front-end styling, we like the look of the Urus from the rear view. The strong rear fenders, a sloping window, a spoiler and Y-shaped taillights provide a feeling of power, further enhanced by four large exhaust pipes. The Urus we tested includes the Carbon Fiber trim package which adds an exotic look to this powerful SUV. 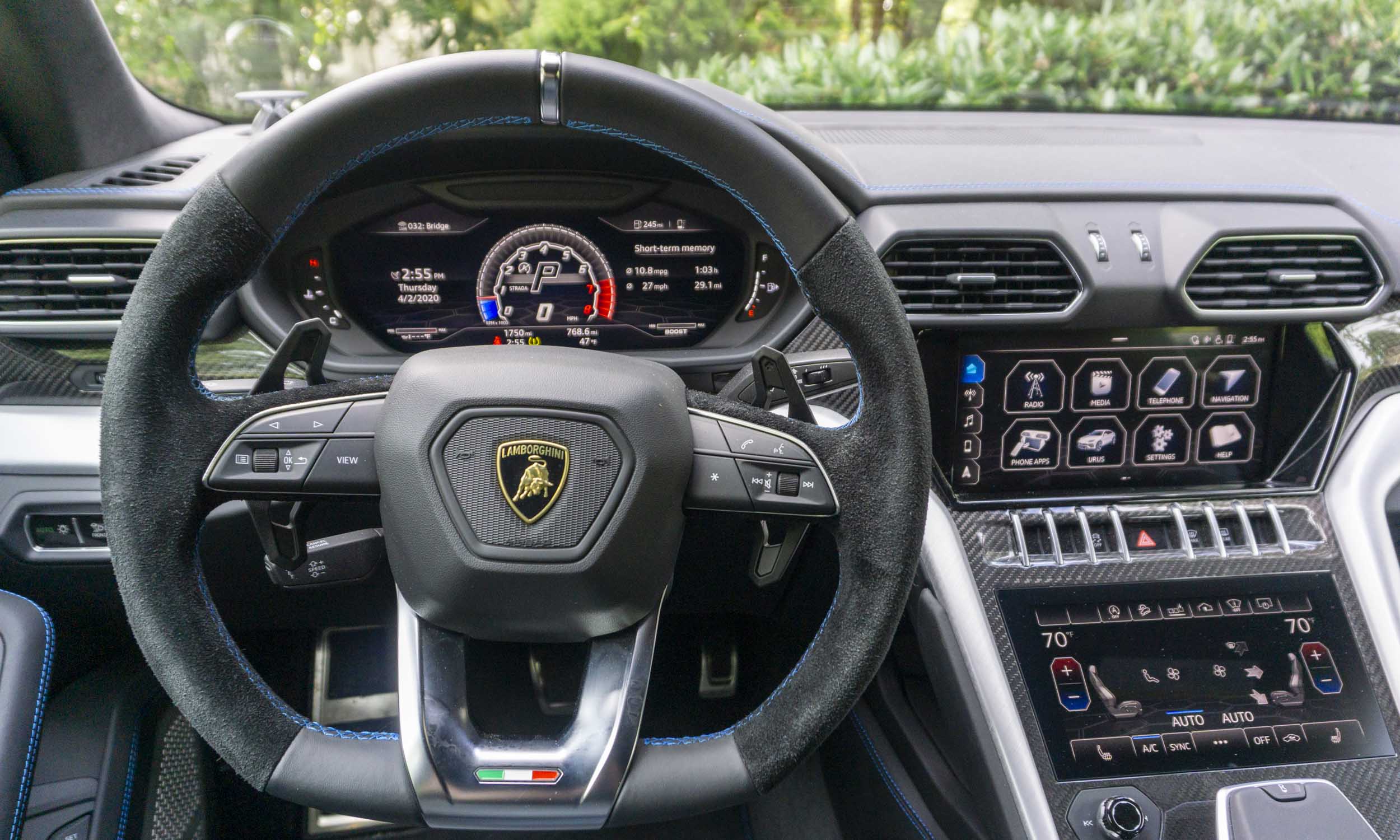 Multiple Displays
Inside, the Urus feels luxurious and high tech with a large touchscreen display in the center of the dashboard, as well as a second display for climate-control functions. The digital instrument panel can be configured for multiple views that cycle depending on the drive mode selected. As in the Huracan, the start button is protected by a red cover, so the action of starting Urus is a bit like launching a missile or firing up a fighter jet — an apt metaphor for a Lambo SUV. 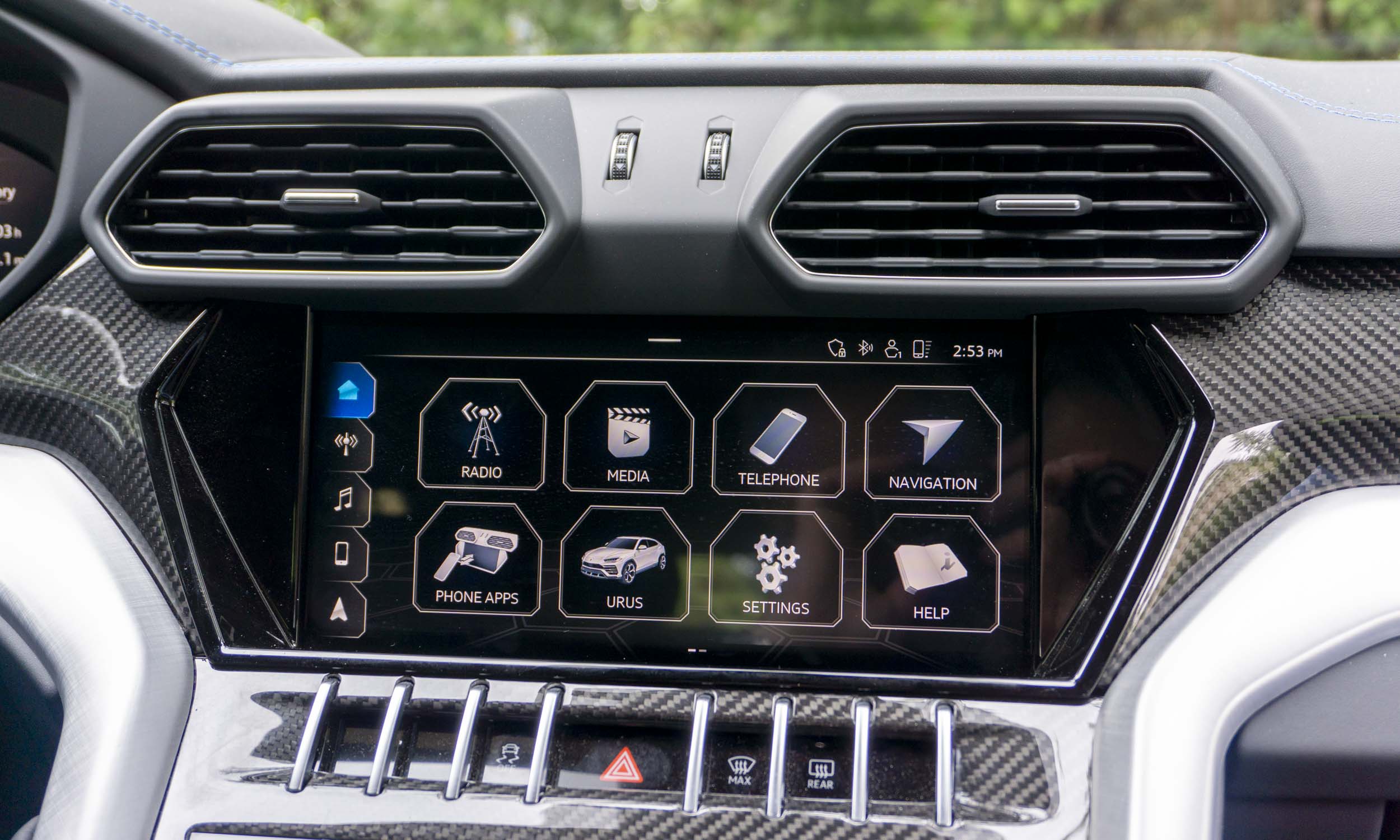 Luxury and Tech
The main display features large buttons as well as shortcuts for easy navigation. We especially like the haptic response — when selecting an item on the touchscreen, it feels like pressing a button. 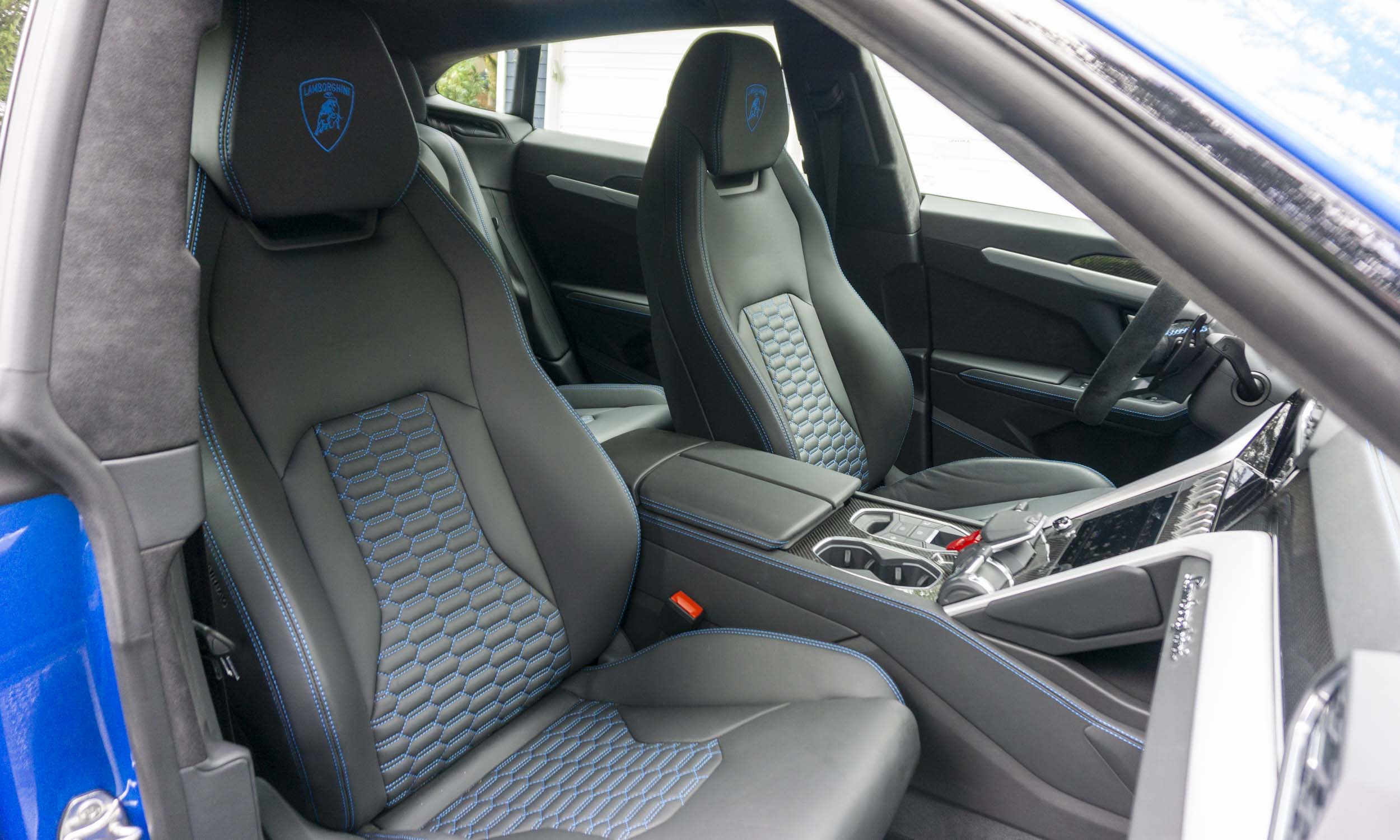 Stylish Seats
Stylish leather-trimmed sport seats contribute to the luxurious feeling of the 2020 Lamborghini Urus, thanks to contrasting stitching and a Lamborghini logo matching the exterior paint color. Carbon fiber trim throughout the interior overlays an exotic touch. 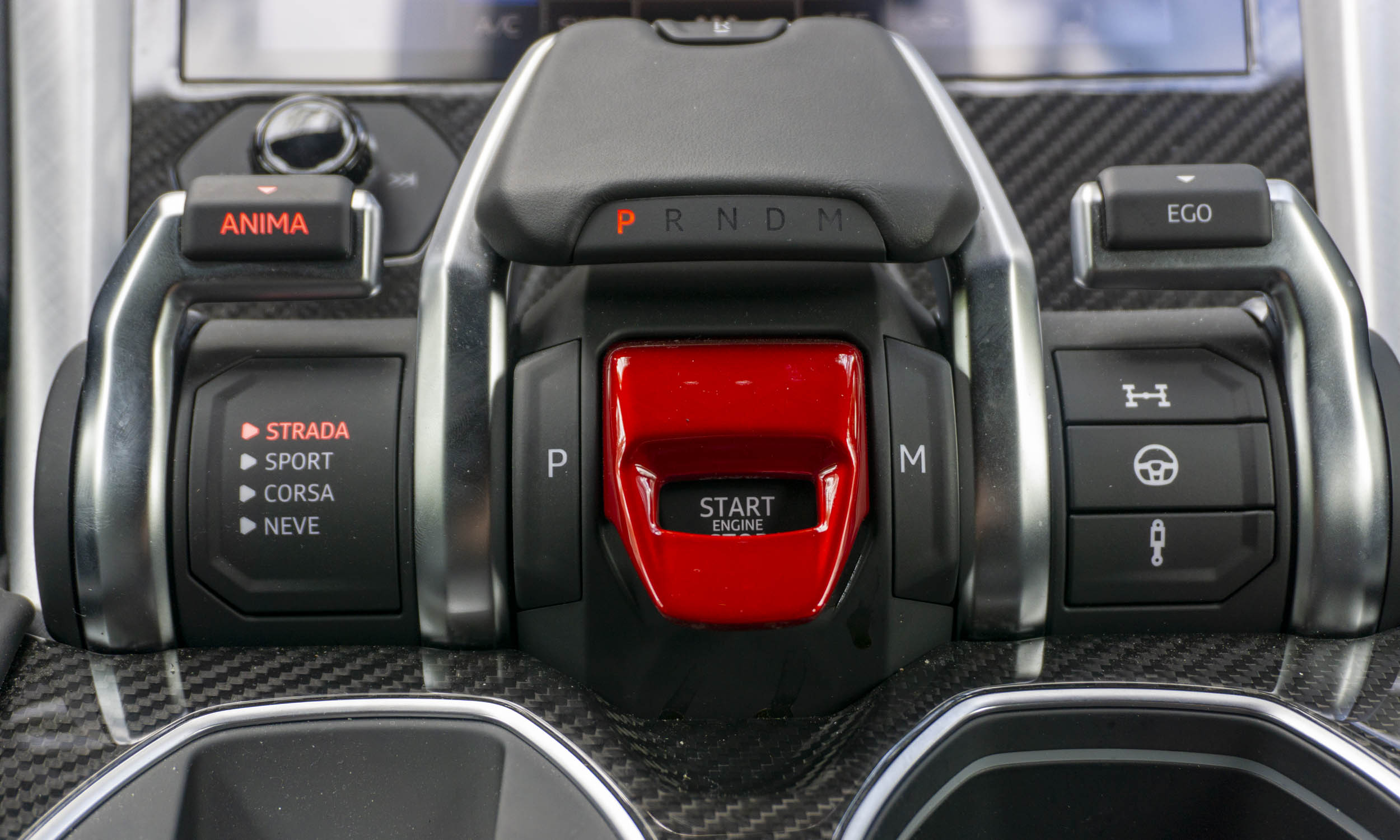 Fun Switches
The main switch gear for operating the Urus is located in the center console surrounding the covered start button, which Lamborghini refers to as the Tamburo (drum). The ANIMA (soul) selector allows the driver to choose a driving mode of Strada (street), Sport, Corsa (race) or Neve (snow), accomplished by a ratcheting motion of the ANIMA lever. A similar switch is used for the EGO selector, which give the driver more options to customize the ride and stability settings. 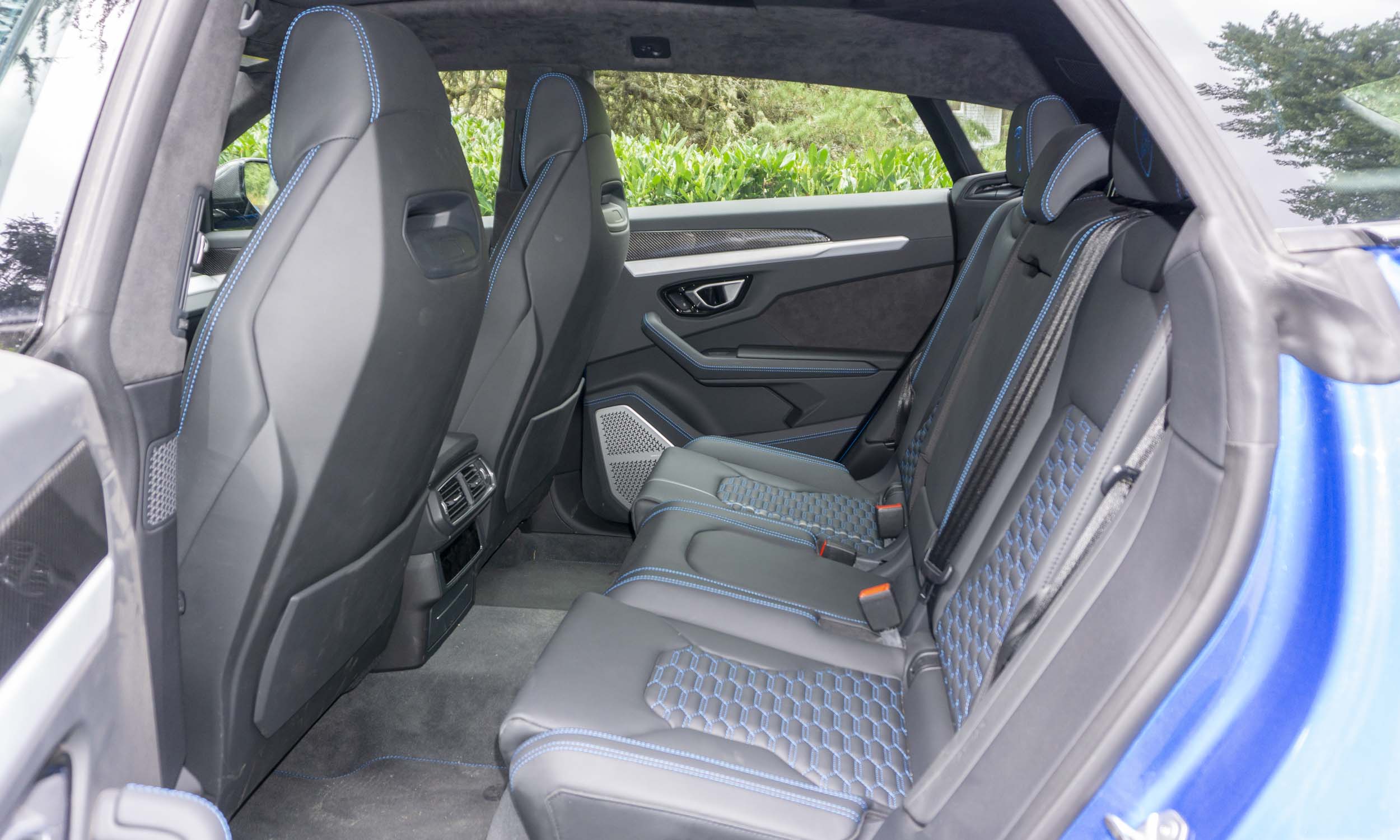 Rear Seat
Perhaps the most unique feature of the Urus is the fact that it has a rear seat, making it the first 5-occupant model in the Lamborghini lineup. Our test Urus had the bench seat; however, Lamborghini does offer the Urus with two rear bucket seats. Seats are stylish and comfortable with a decent amount of legroom. The rear-seat area features dual-zone climate controls as well as seat heating. 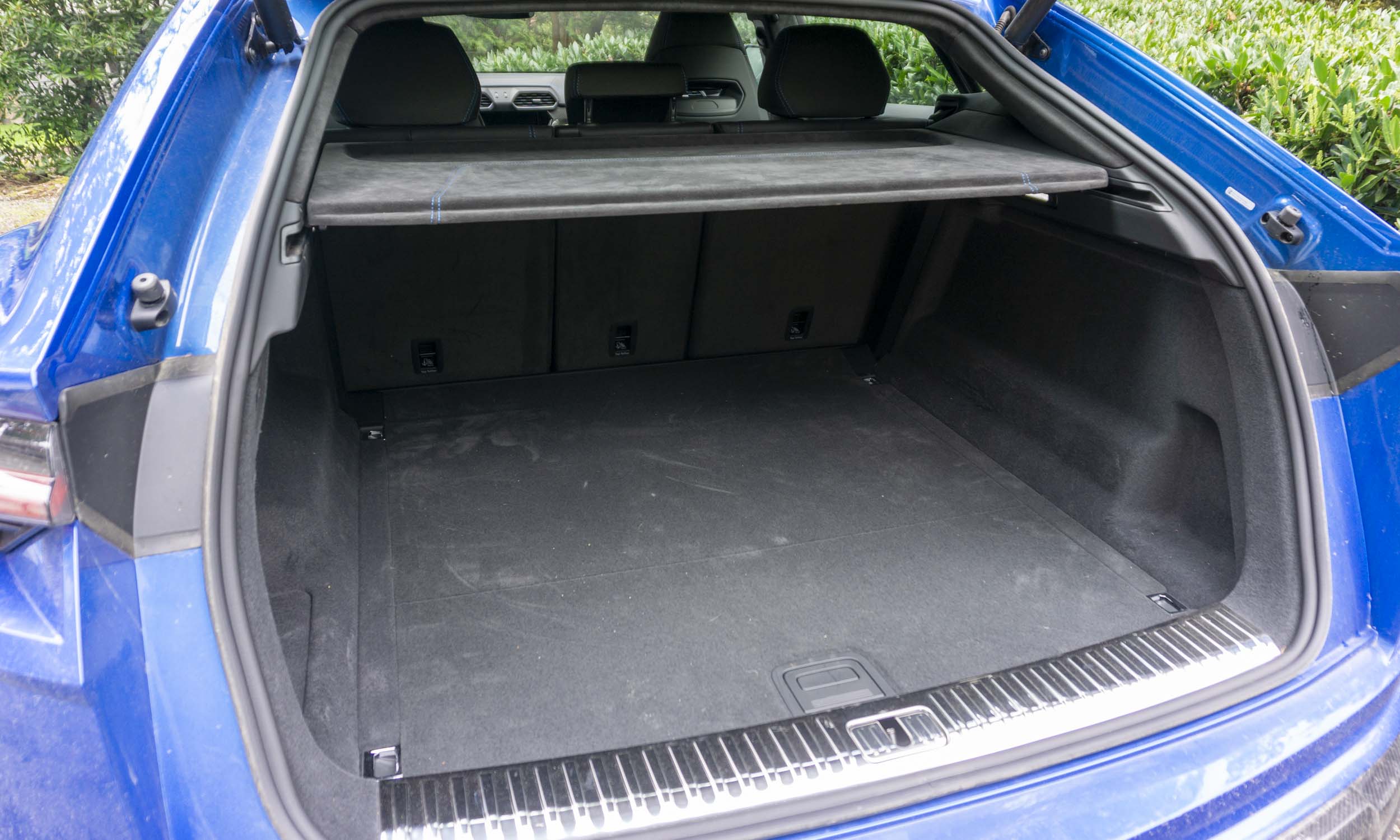 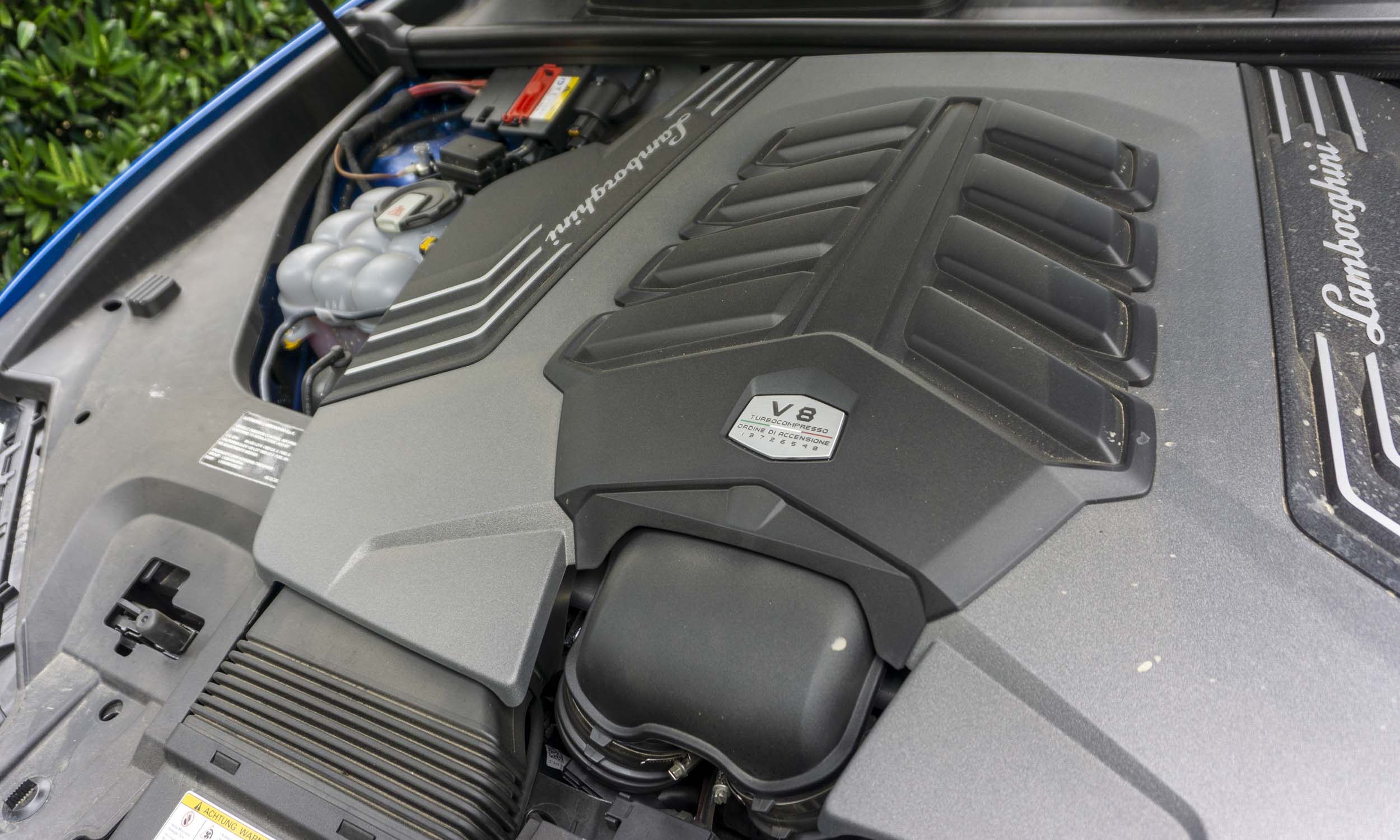 Under the Hood
Powering this super SUV is a 4.0-liter twin-turbo V8 engine producing a prodigious 650 horsepower and 627 lb-ft of torque at a low 2250 rpm, teamed with a quick-shifting 8-speed automatic transmission. Power gets delivered to tarmac or dirt via a custom 4-wheel-drive system with active torque vectoring as well as 4-wheel steering. 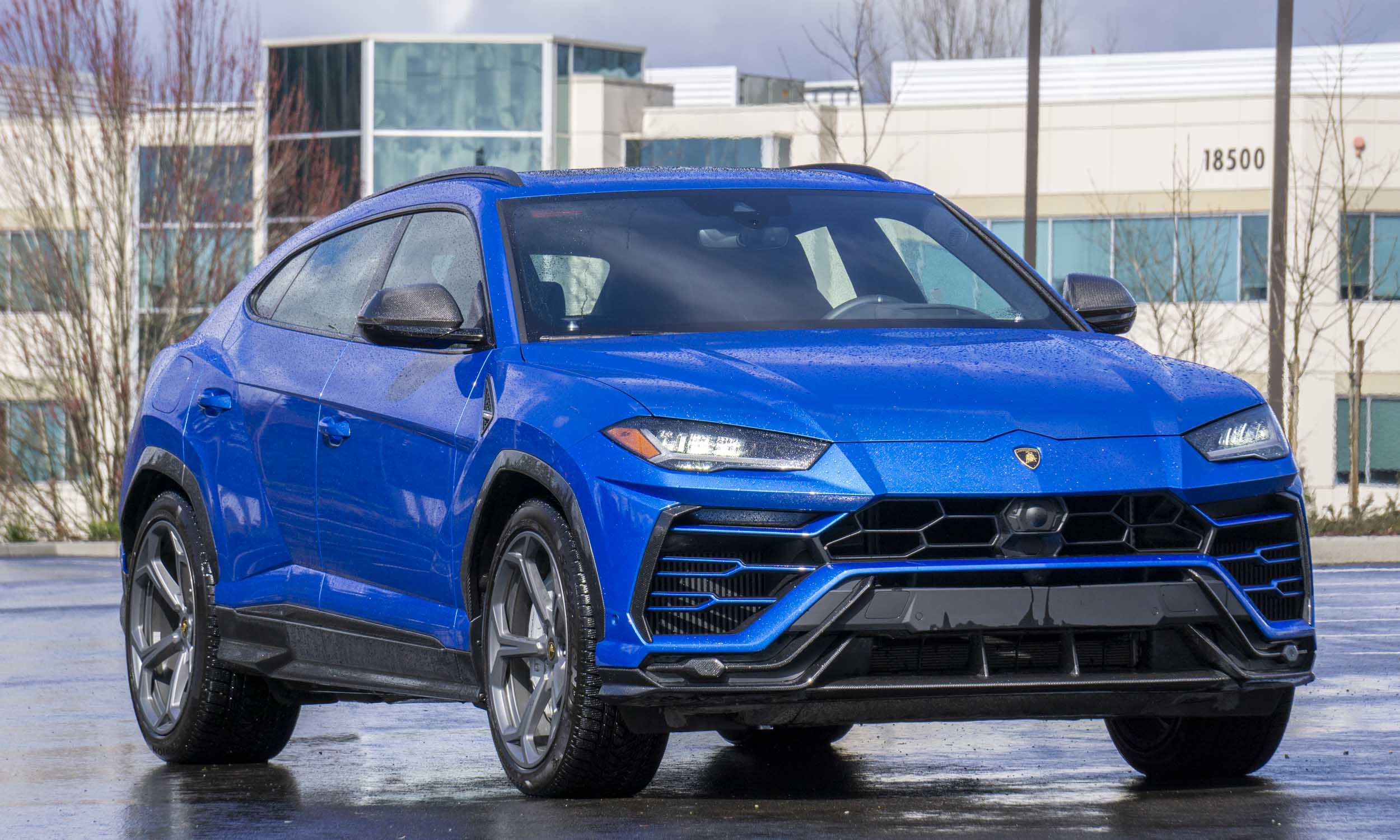 Performance
With excellent traction and enormous power, the Urus easily overcomes its 4,850-pound curb weight, sprinting to 62 mph in 3.6 seconds. In 12.8 seconds the Urus passes 124 mph and with enough space the big SUV will reach 190 mph. Fuel efficiency is less spectacular — during our time in the Urus the trip computer showed an average of 10.3 mpg. Granted, a heavy right foot might have contributed to that low number. 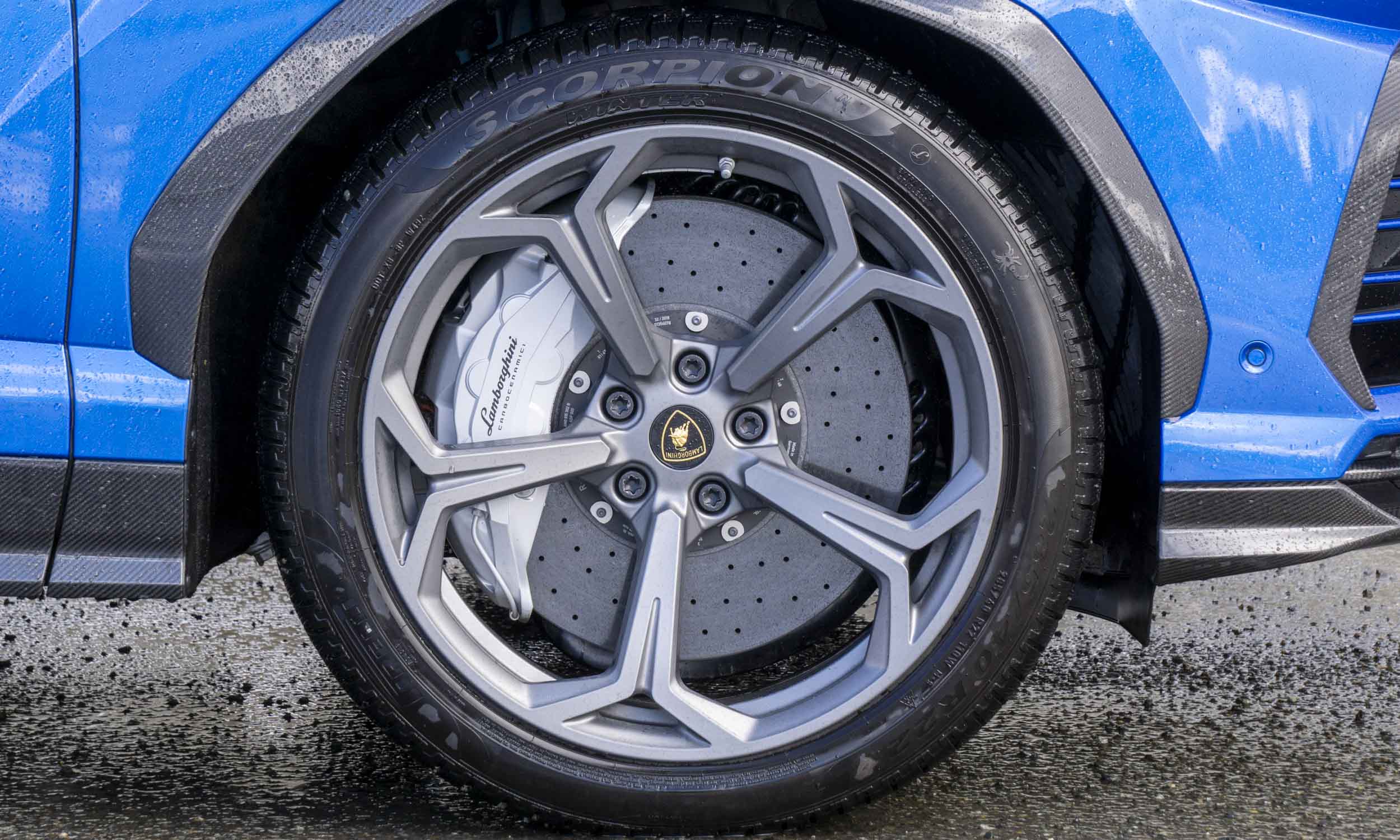 Big Brakes
With great power comes great responsibility — and hopefully great braking. The Urus has this handled with massive carbon ceramic brakes. A full stop from 62 mph can be accomplished in 110 feet. 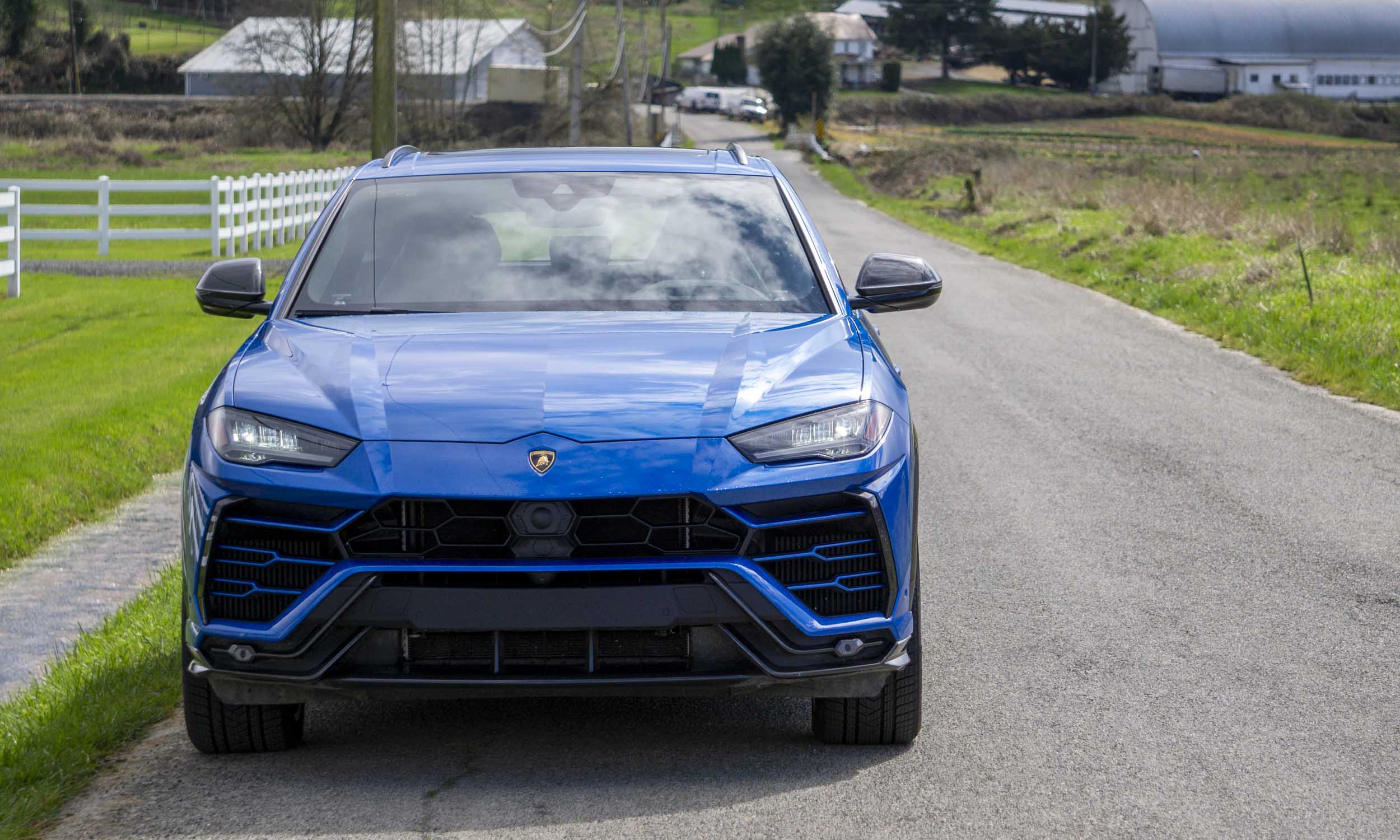 On the Road
On road the Urus is not as intimidating as an exotic sports car — it offers similar performance, but it doesn’t feel fragile — in fact, it feels almost rugged. Acceleration is incredibly strong, and in Sport or Corsa mode the exhaust sounds extra loud. The test Urus was fitted with massive Pirelli Scorpion winter tires which provided excellent grip in the dry or wet. Applying full throttle — even exiting a turn — resulted in stable acceleration with no discernable wheelslip. 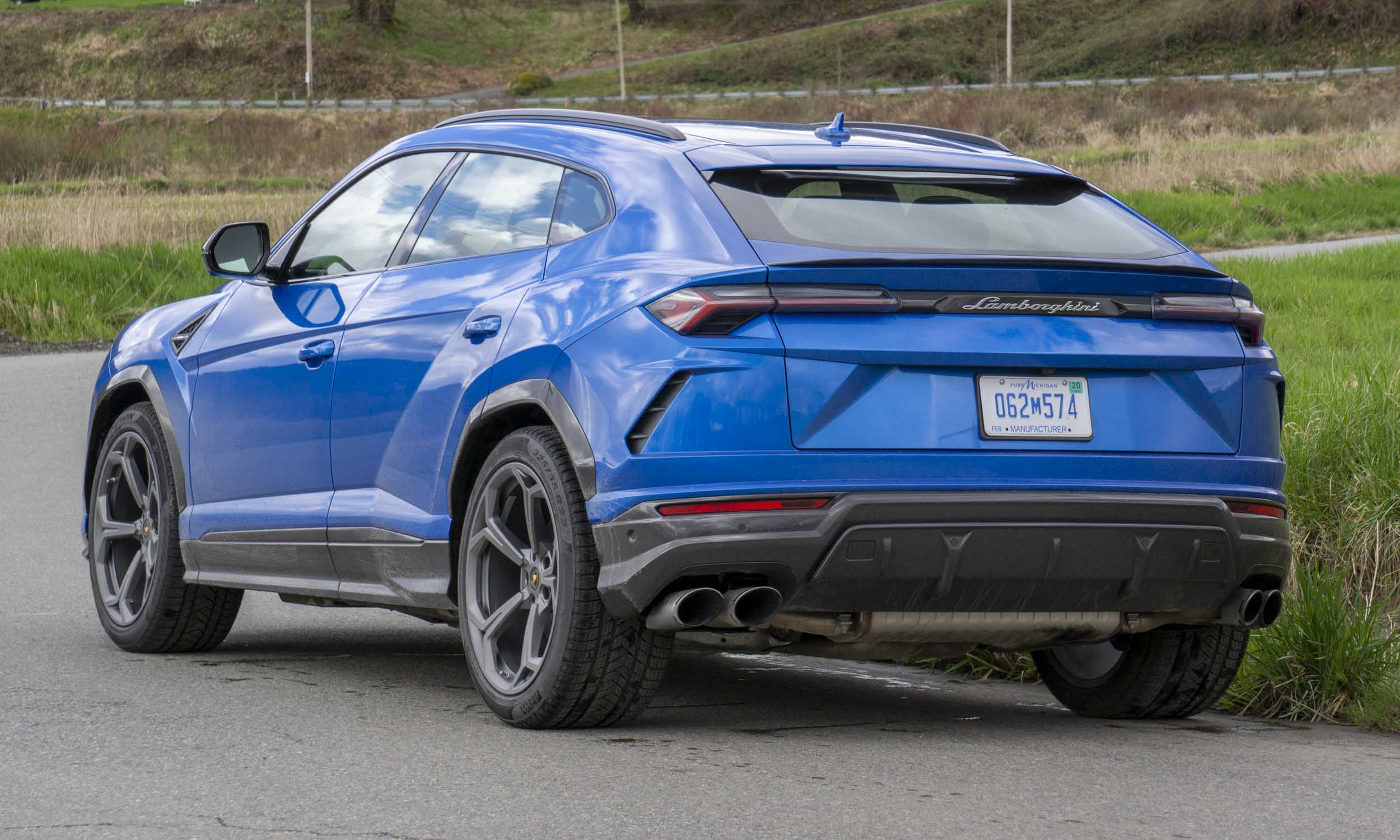 Quick Shifting
The automatic transmission delivers very quick shifts; although the paddles offer a bit more engagement, in Sport or Corsa mode the transmission shifts exactly as a driver would want when left to its own devices. Under full throttle, gear changes are practically instantaneous, and while slowing the upshifts come right on time, accompanied by a lovely exhaust burble. 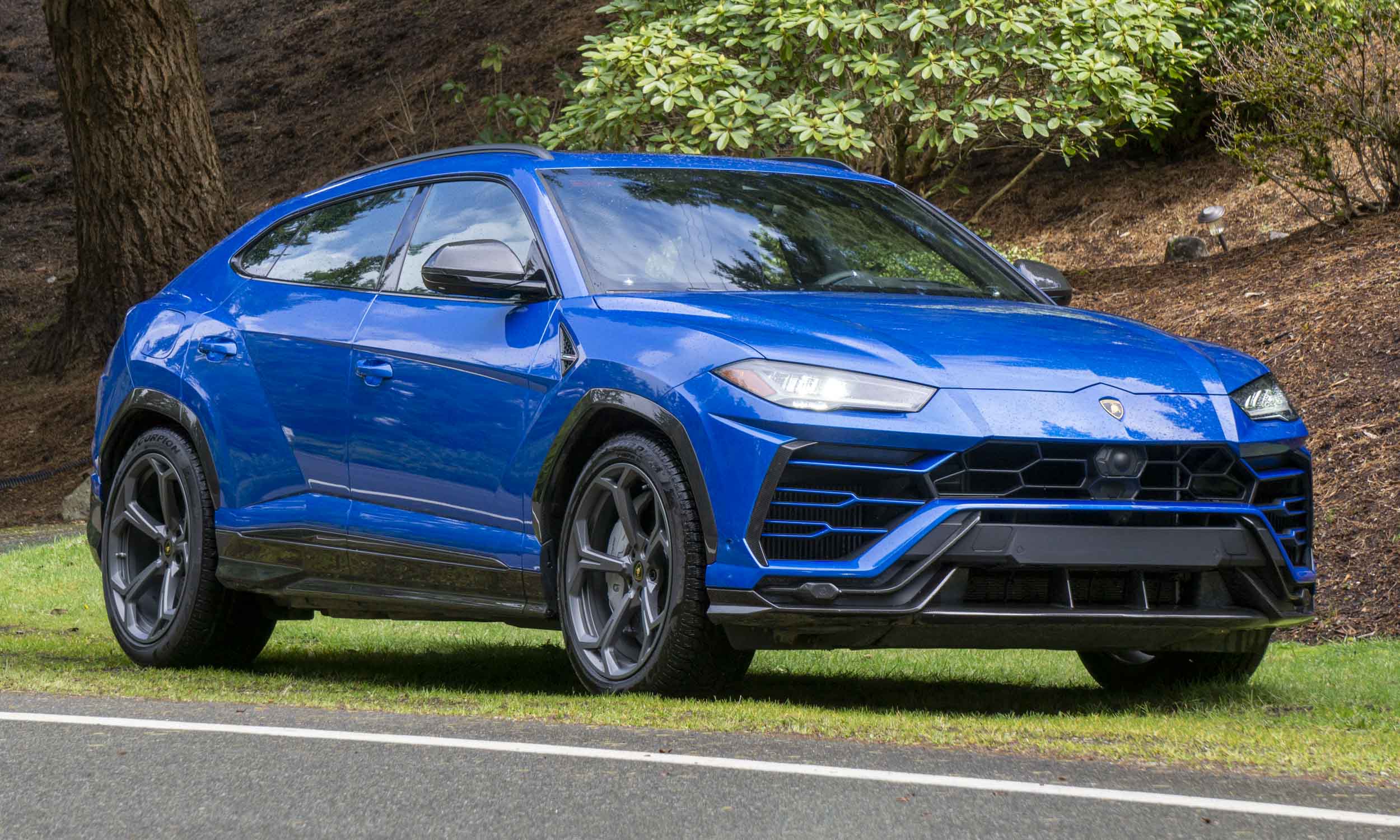 Big SUV
When Urus drivers get into winding roads, they’ll start to recognize the mass of this big SUV. We didn’t push the Urus to its extremes while driving on public roads — the edges of performance are much farther than we experienced. And while the Urus is rather lightweight for an SUV — about 4,850 pounds — it’s still heavy for a high-performance vehicle. That said, the Urus will easily keep pace or exceed the performance of many sports cars on the road — especially with the right driver behind the wheel. 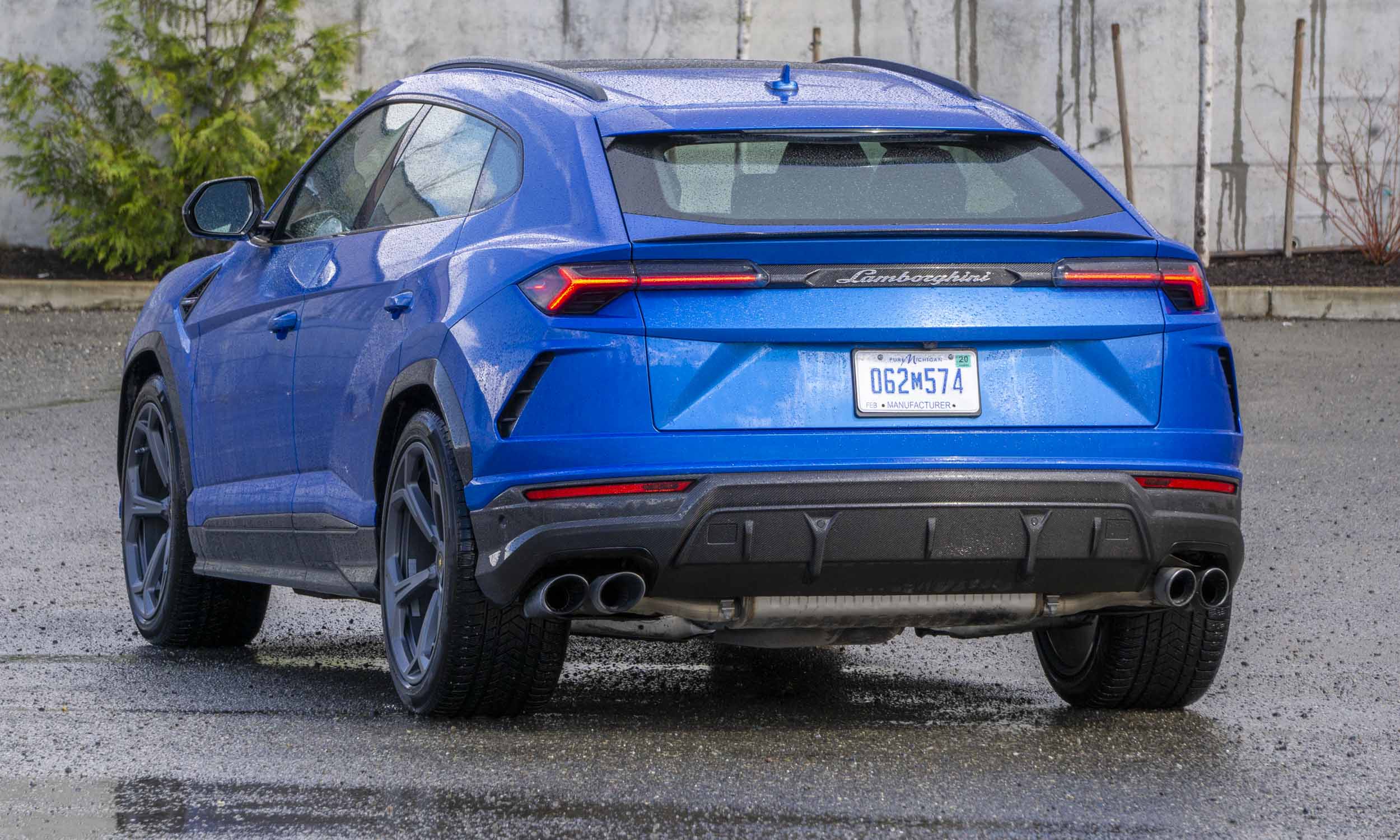 Daily Driver
Most impressive about the Urus is its driving ease. Sure, it’s most fun when roaring up some mountain road, but this Super SUV is content to simply cruise down the freeway quietly and comfortably. With its excellent traction, the Urus could easily assume the role of daily driver no matter what the weather conditions — with room for the whole family. 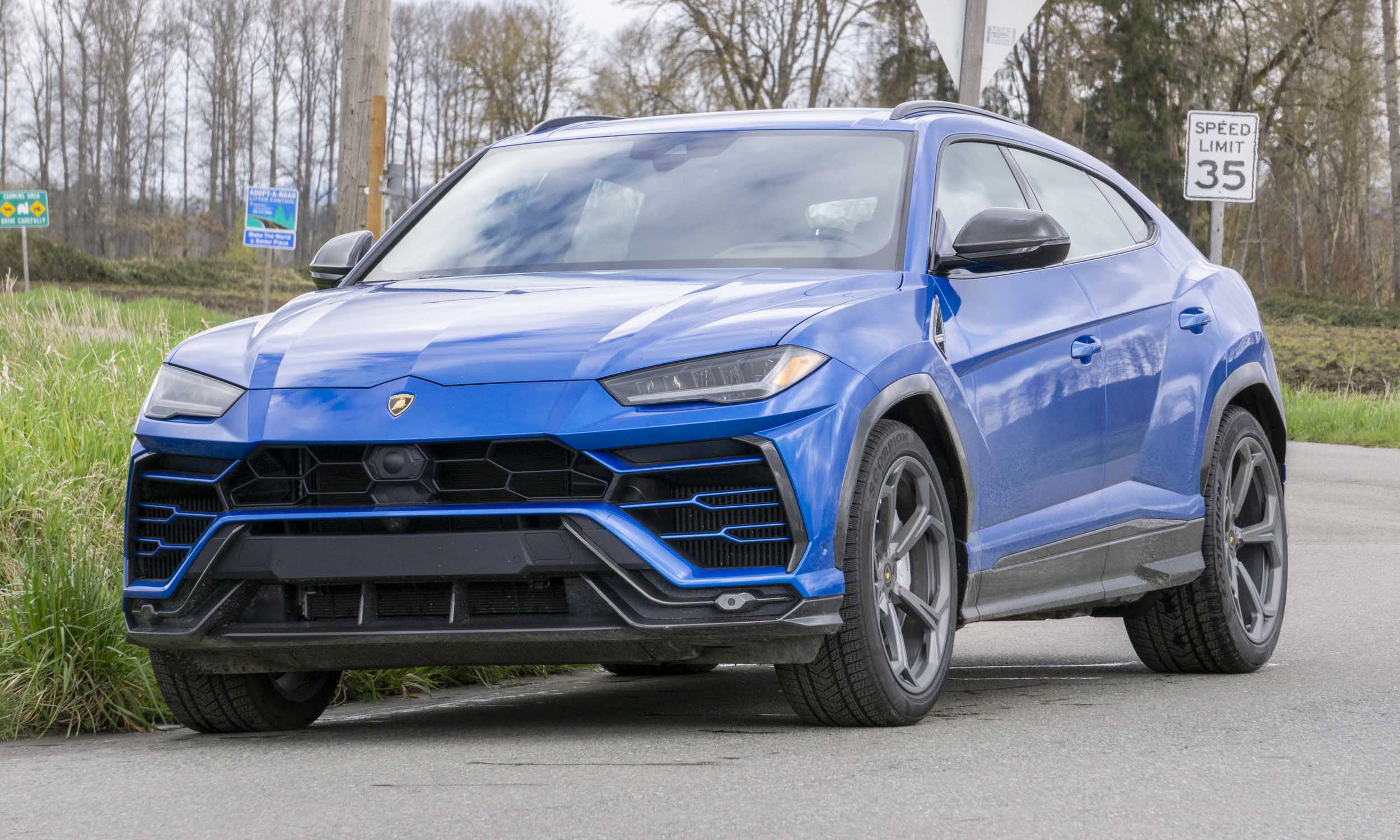 Rating: 9.0
The Urus is perhaps one of the more exotic high-performance SUVs on the market — as it should be, coming from Lamborghini. As with other models in the Italian car company’s lineup, the Urus is not subtle in design or sound, and it is not a vehicle for the timid. With outstanding performance and handling, a luxurious interior and the utility expected of an SUV, the Lamborghini Urus is likely the best example of an exotic that would be fun and easy to drive all year long.