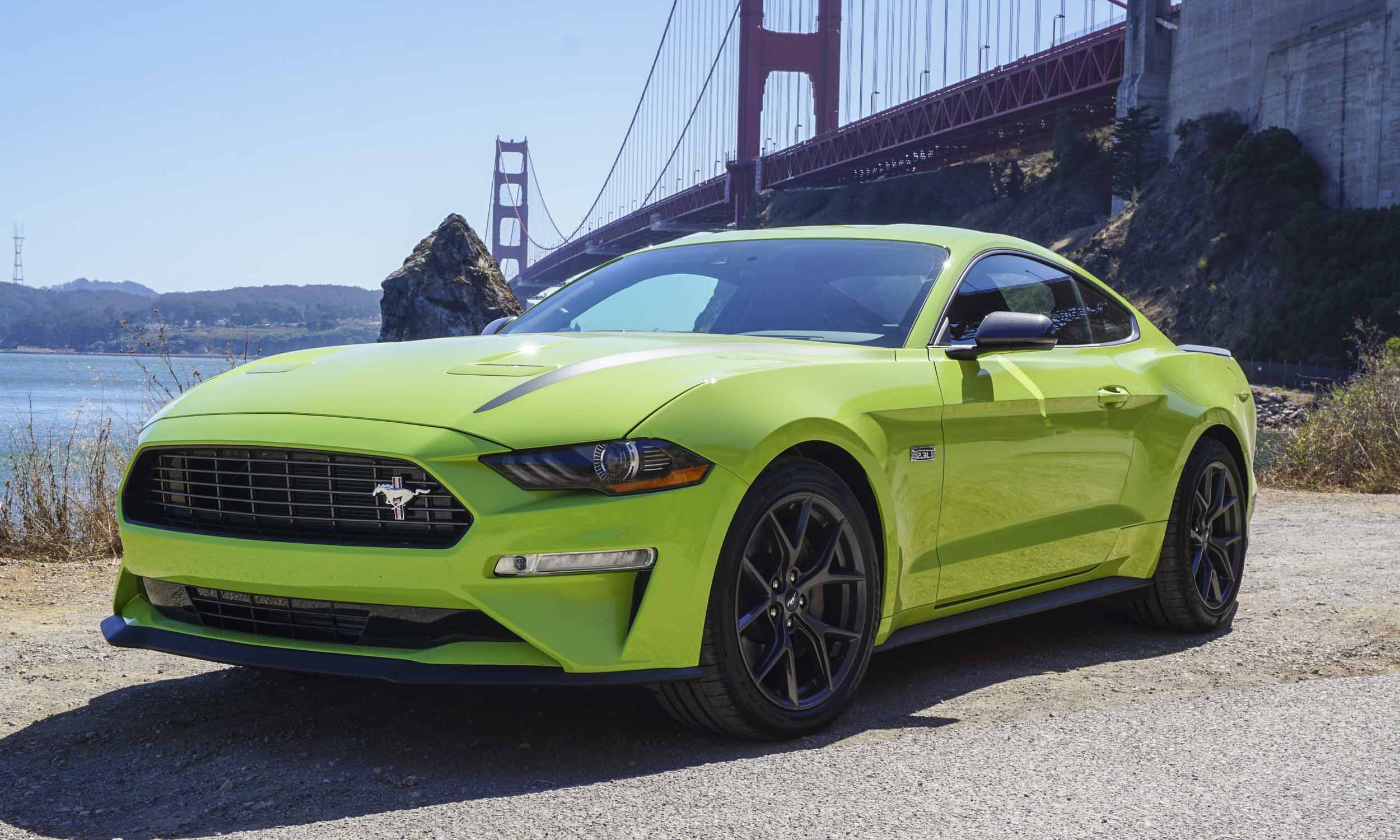 © Mike Meredith, Automotive Content Experience
Mustang Performance
Since the dawn of Ford’s innovative pony car 55 years ago, Mustang performance has been synonymous with rumbling V8 power, which continues to this day in the Mustang GT, Mustang Shelby GT350 and upcoming Mustang Shelby GT500 — all boast V8 power. However, for 2020 Ford takes a different tack with Mustang performance by introducing a Mustang EcoBoost High Performance Package. 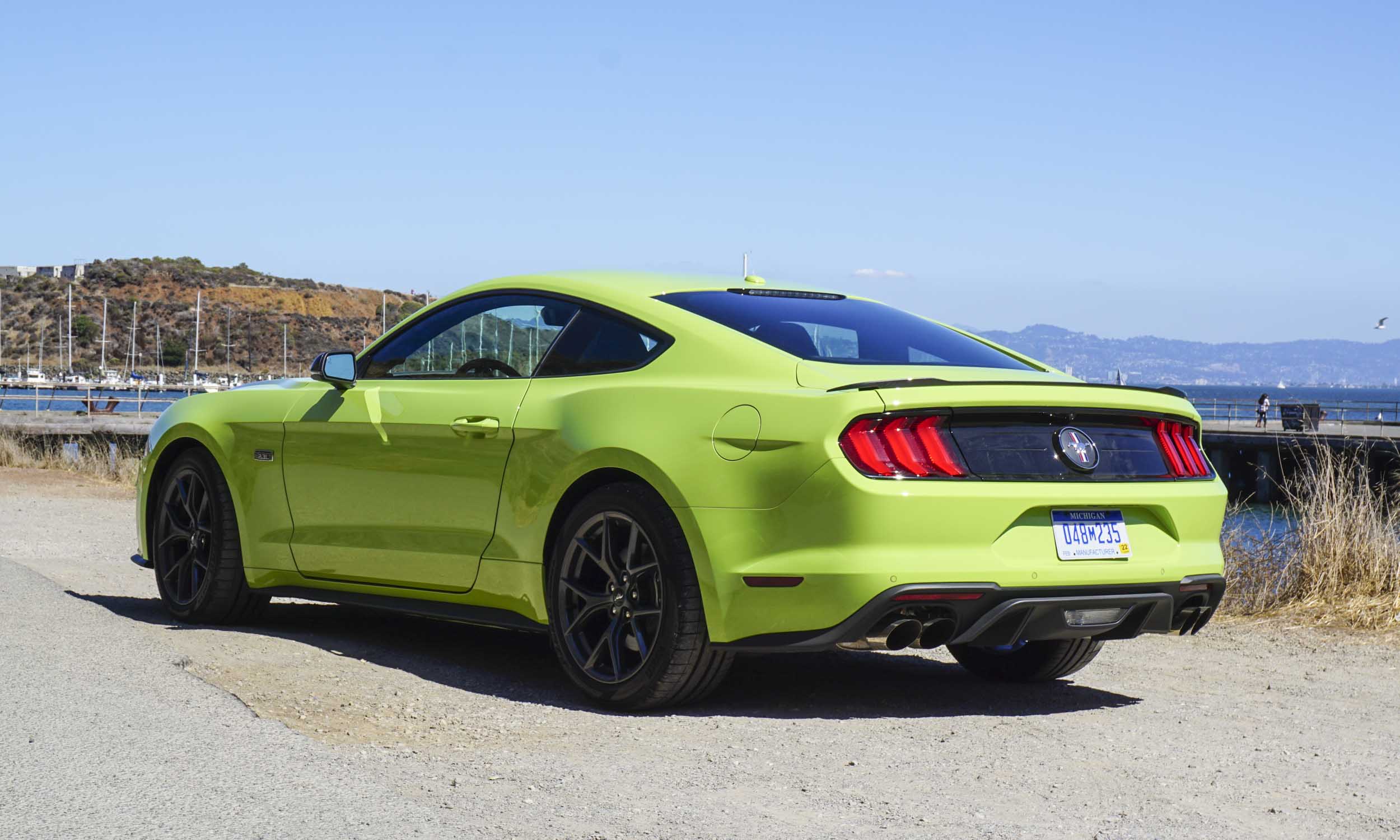 © Mike Meredith, Automotive Content Experience
2020 Mustang EcoBoost High Performance Package
The idea for the EcoBoost High Performance Package began when a few performance-oriented Ford engineers swapped a Focus RS 2.3-liter EcoBoost engine into a Mustang with the idea of creating a fun to drive, performance-focused (excuse the pun) Mustang. Once Ford brass approved the idea, work began to have the new car ready for the 2020 model year, which happens to coincide with the 55th anniversary of the Mustang. 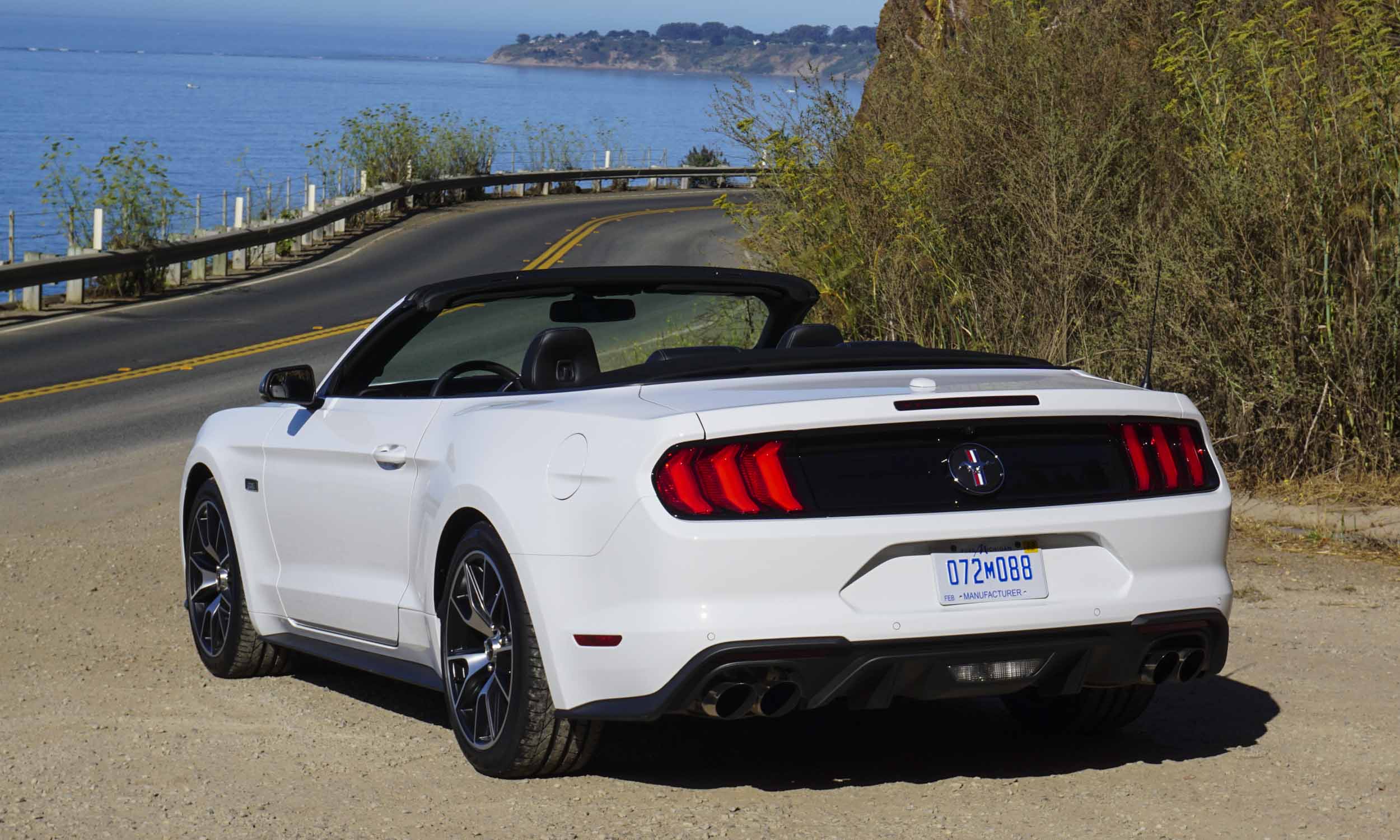 © Mike Meredith, Automotive Content Experience
Model Lineup
The EcoBoost HPP is available on the entry-level Mustang in both coupe and convertible versions, at a cost of $4,995. The starting price of the Mustang Fastback Coupe is $26,670, and the Mustang Convertible starts at $32,170. 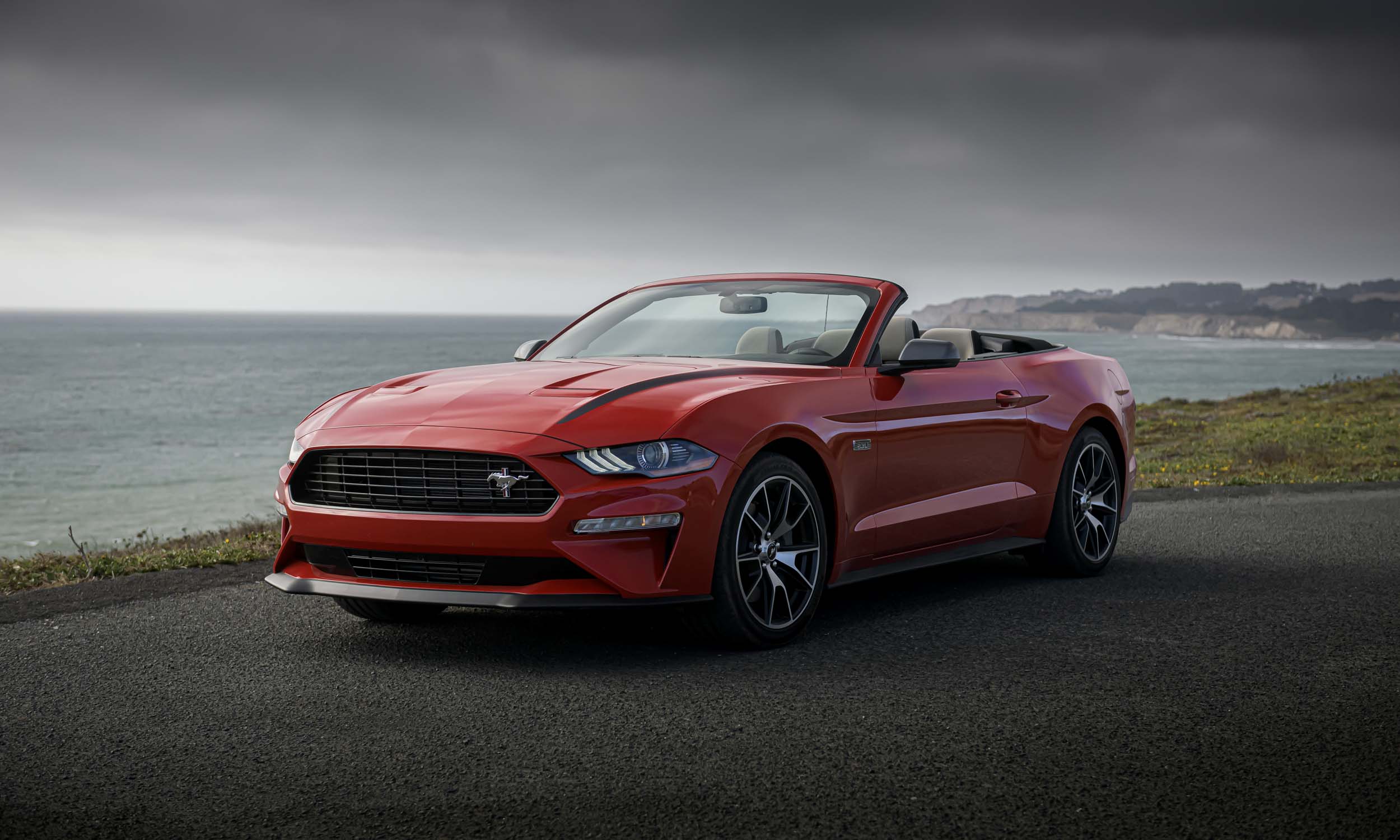 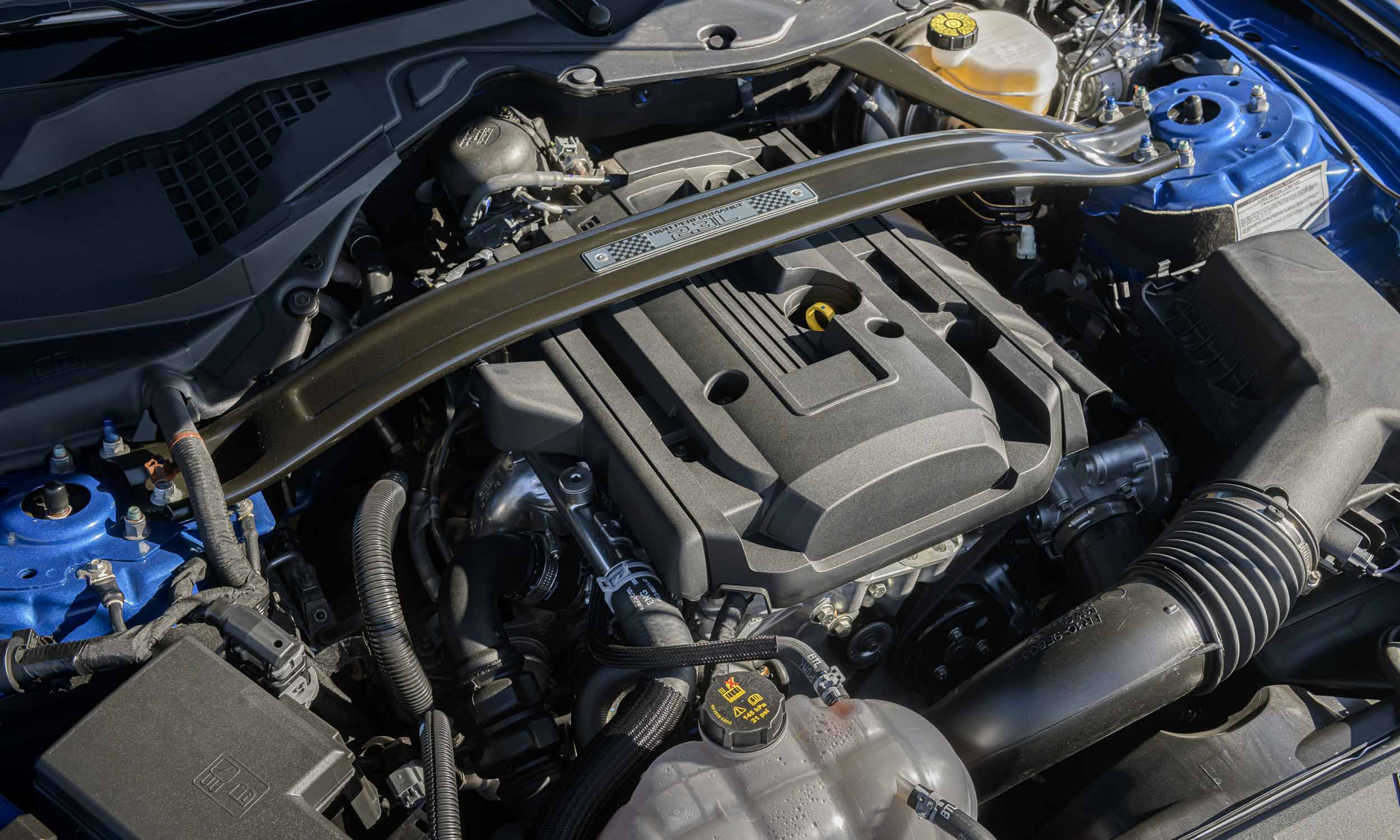 © Ford Motor Company
Under the Hood
The heart of the 2020 EcoBoost HPP is a 2.3-liter EcoBoost turbocharged engine, which is not simply a more powerful version of the standard 2.3-liter, but a revised version of the Ford Performance tuned 2.3-liter EcoBoost engine used in the Focus RS and produced in Valencia, Spain. Fitting the new engine into the Mustang required modifications to change its transverse (sideways) orientation in the Focus RS to a longitudinal placement for the rear-wheel-drive Mustang. Engineers also developed a larger twin-scroll turbocharger so the engine power band would better match both the standard 6-speed Getrag manual transmission and Ford’s 10-speed SelectShift automatic transmission. 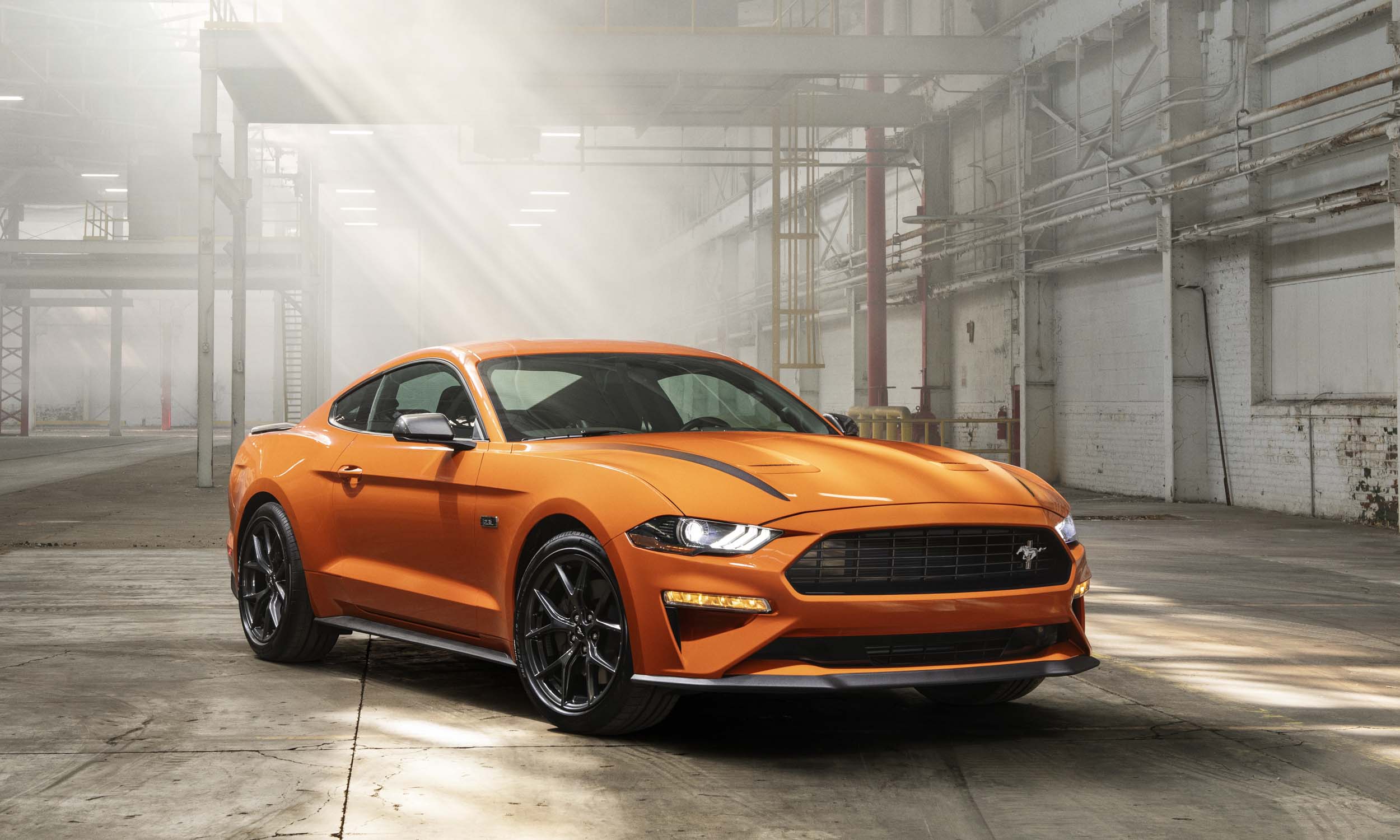 © Ford Motor Company
Most Powerful EcoBoost Mustang
Since the Ford Performance team completed modifications on the 2.3-liter engine for the Mustang EcoBoost HPP, the engine now produces 332 horsepower and 350 lb-ft of torque. The new turbocharger and revised engine tuning deliver 90 percent peak torque between 2500 and 5300 rpm, and horsepower holds to the 6500 redline for more usable power and torque. The package is completed with a fully-active quad-tip exhaust system tuned to give the Mustang EcoBoost HPP a unique and powerful exhaust note. The Mustang EcoBoost HPP is expected to accelerate from zero to 60 mph in the mid-4-second range with the automatic transmission. 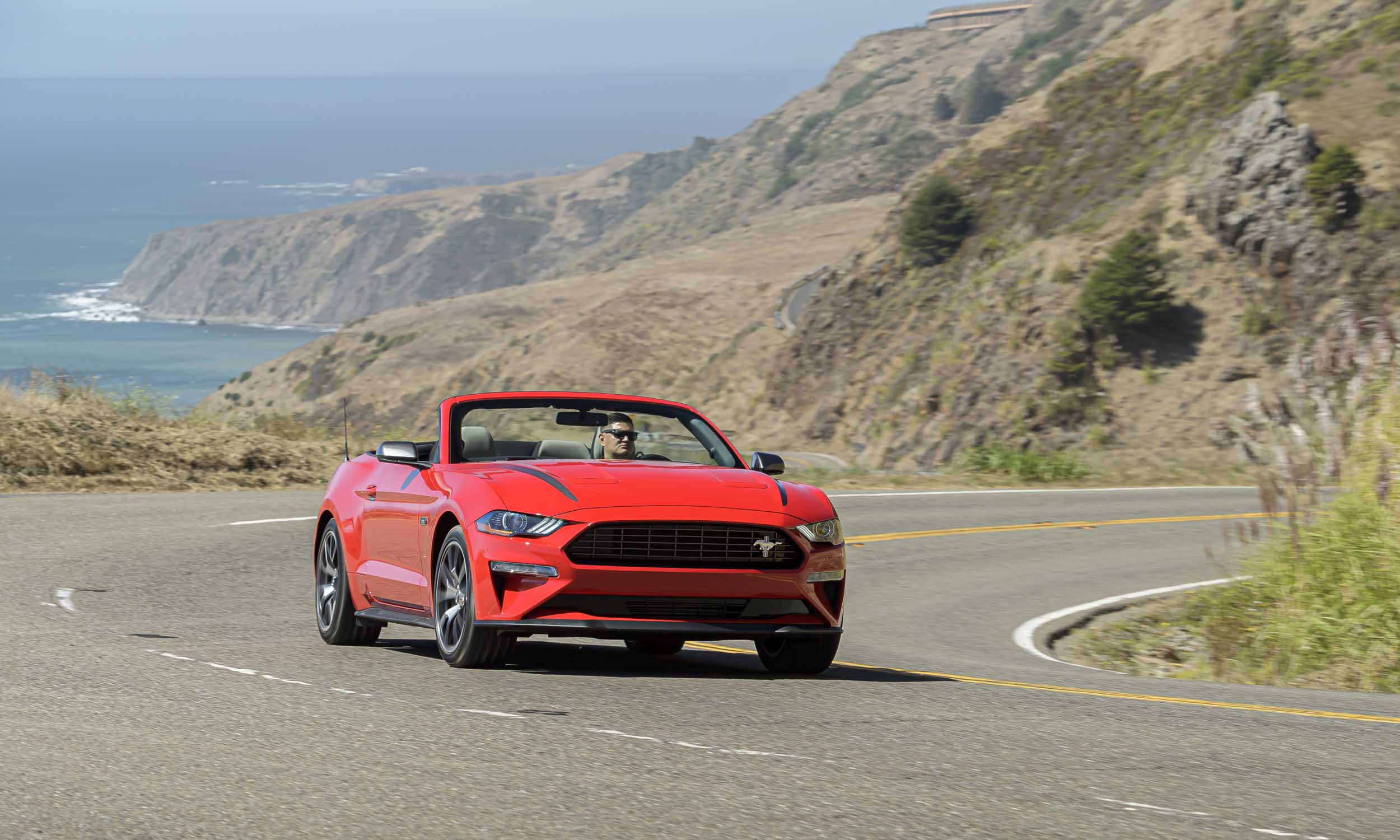 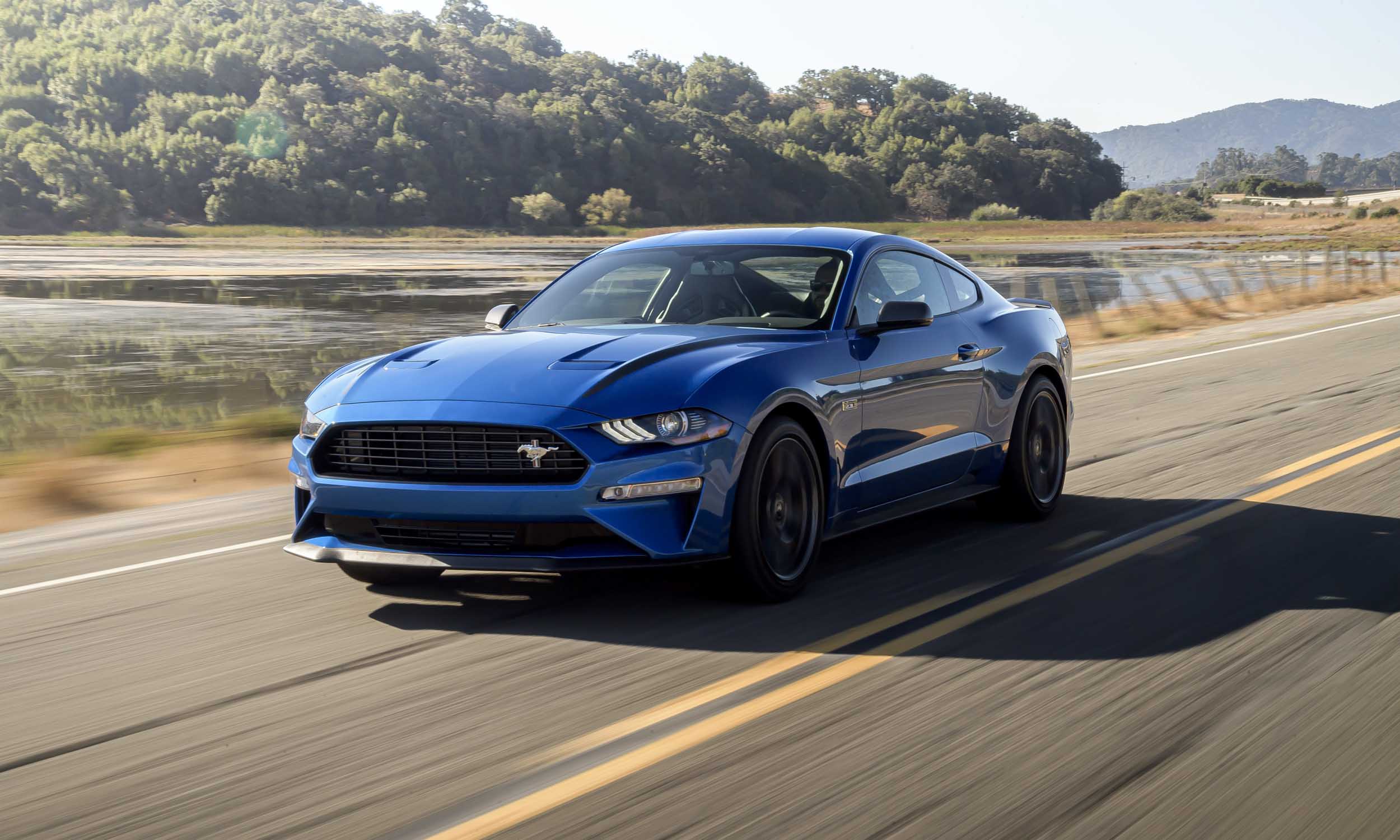 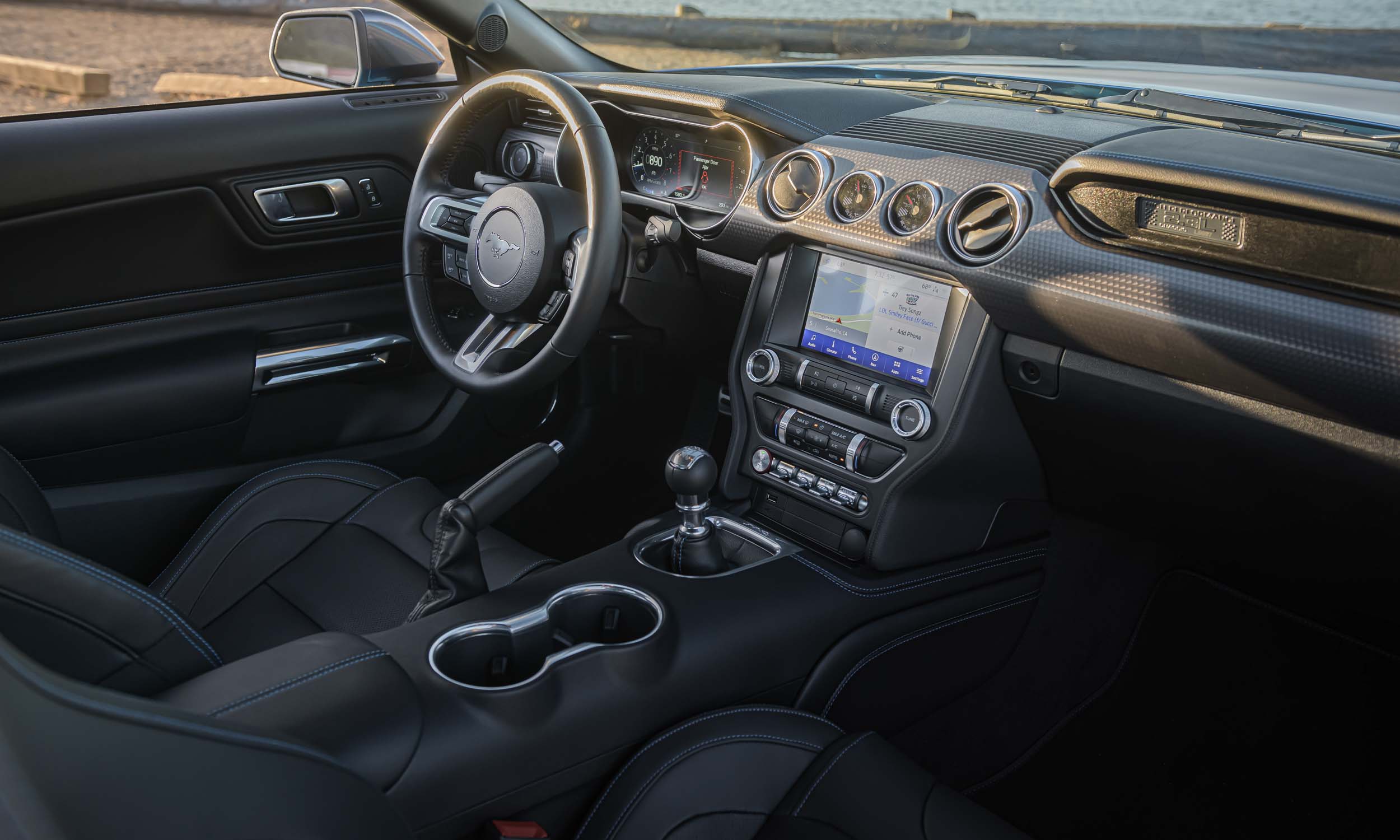 © Ford Motor Company
Inner Space
Inside, the Mustang EcoBoost HPP features engine-spun aluminum dash trim with center-mounted oil pressure and turbo boost gauges, and a numbered dash plaque on the passenger side. The standard bucket seats are comfortable and do a decent job holding the driver and front-seat passenger in position during spirited driving, but enthusiasts can opt for Recaro seats. 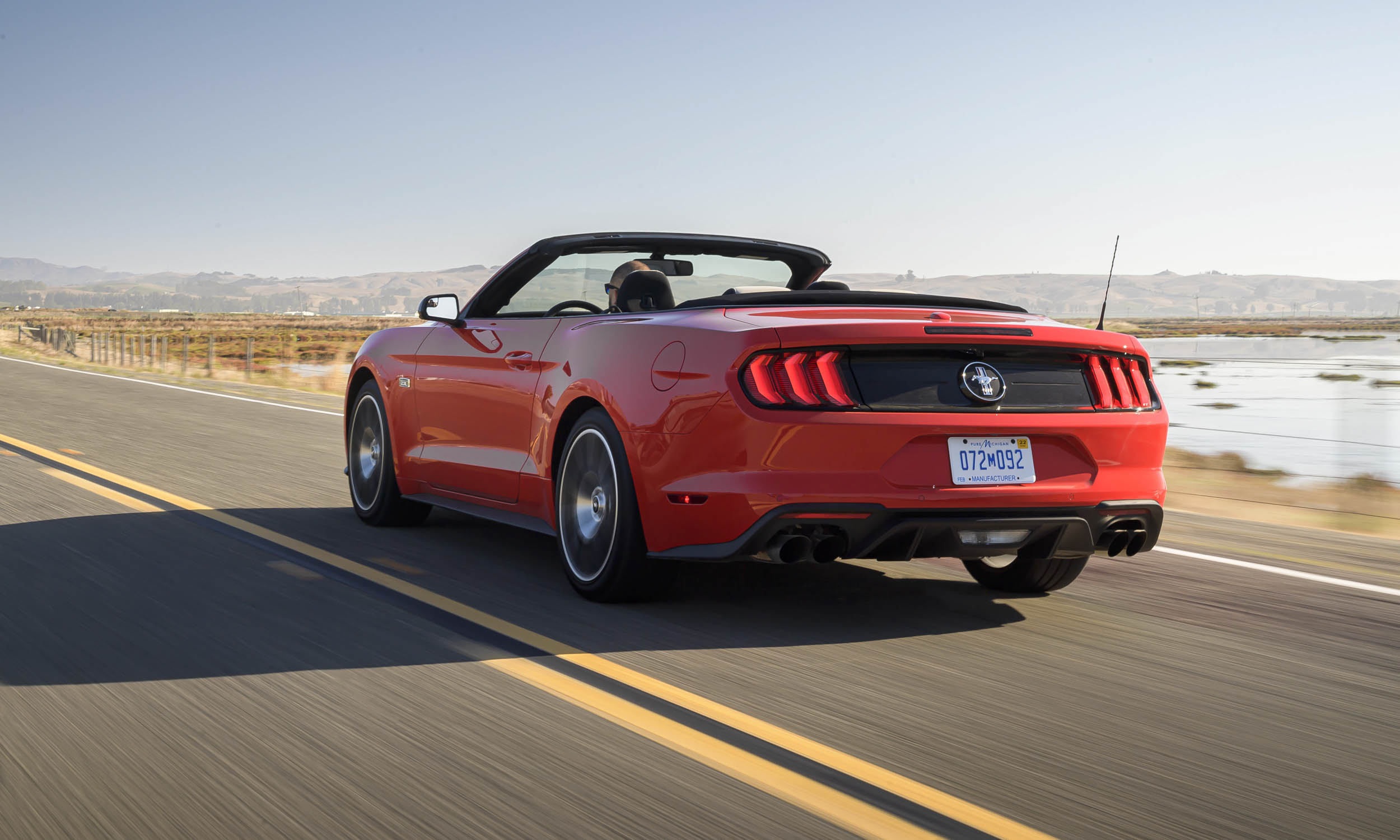 © Ford Motor Company
On the Road
Ford engineers really hit the mark creating a fun-to-drive Mustang with the EcoBoost HPP — it is a true enthusiast’s car that feels right at home on twisty coastal California highways. The EcoBoost HPP feels balanced and precise with great steering feel. The turn-in to corners is very direct and precise, maintaining balanced, consistent feedback through corners. The potent engine has a wide power band well matched to either the 6-speed manual or the 10-speed automatic. The EcoBoost HPP accelerates well out of corners.

© Ford Motor Company
Handling Package
The Handling Package really takes this Mustang’s performance up another notch thanks to wider, stickier summer tires and the Torsen limited-slip differential. Turn-in is even more precise, which is likely a combination of the wider front tires and the MagnaRide dampers. The EcoBoost HPP is a car enthusiast drivers will want to take to the autocross or to track day events — for those drivers, the Handling Package at $1 995 is a must-have option. 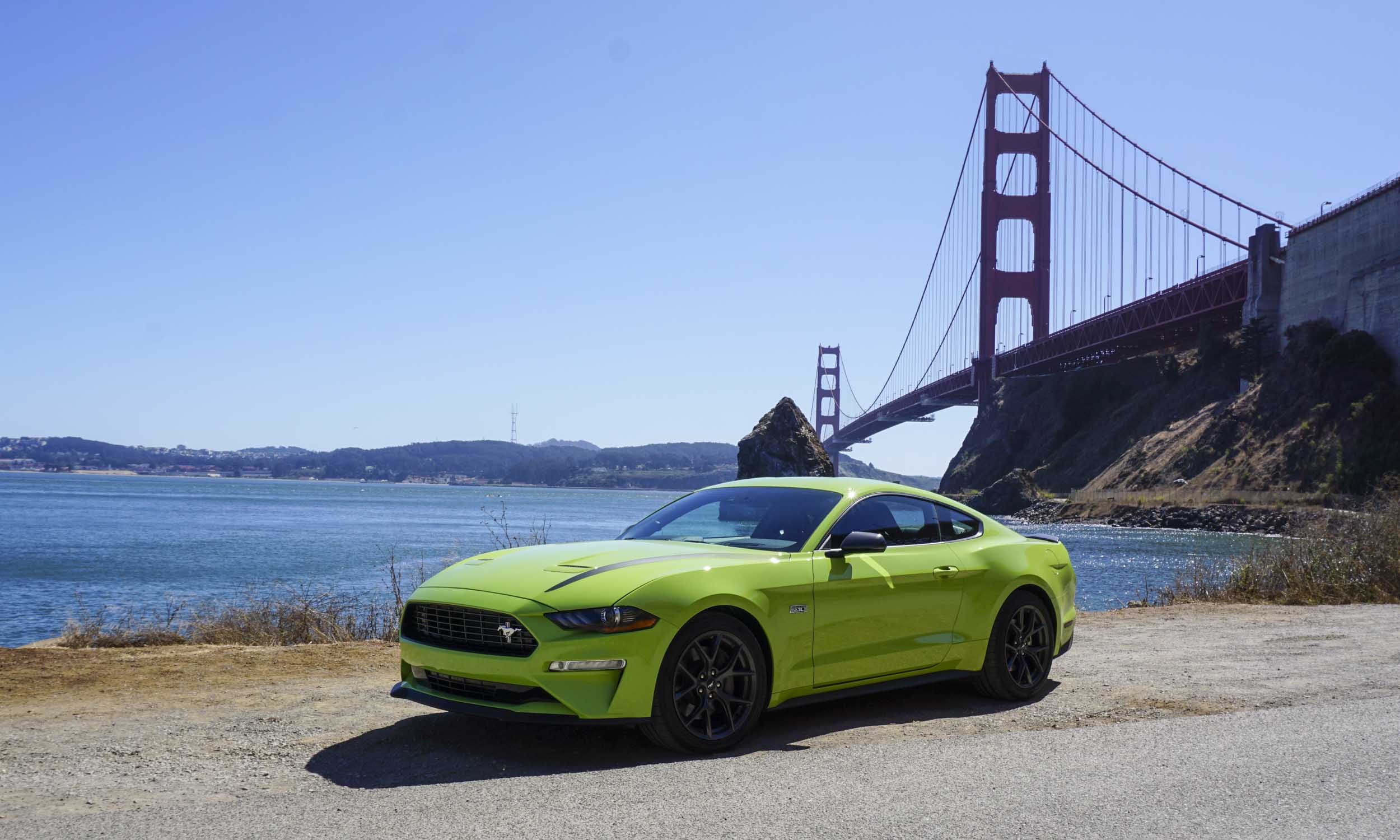 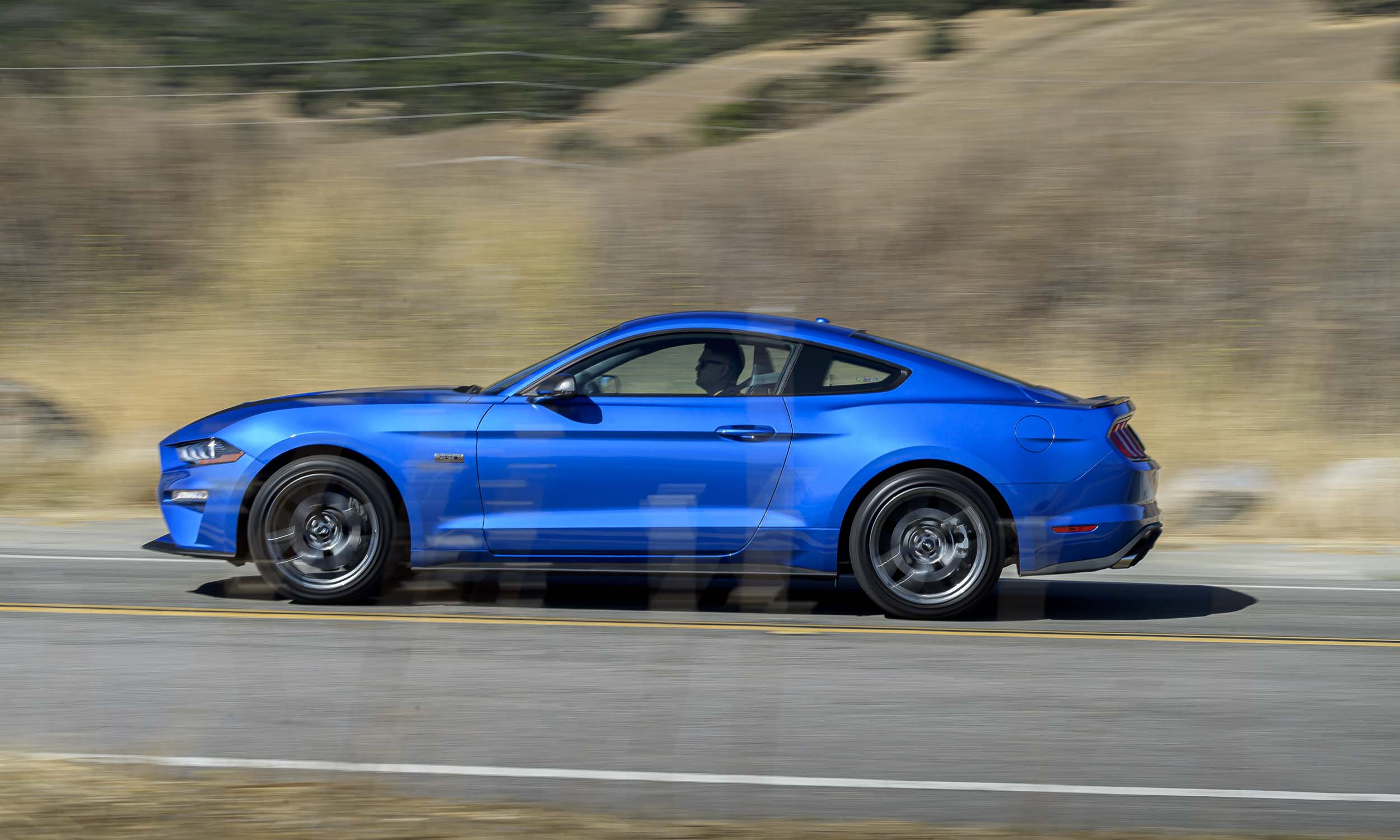 © Ford Motor Company
Right for You?
The 2020 Mustang EcoBoost HPP is an enthusiast’s car and a great alternative to a V8-powered Mustang GT — at an attractive price. For those who enjoy winding roads, autocross and occasional high-performance track days, the EcoBoost HPP would be a great choice, both as a canyon carver and everyday driver. While today’s Mustang GT offers more than 400 horsepower, the Ford Performance-tuned 2.3-liter EcoBoost is a super engine for the Mustang; the combination creates a modern alternative to the V8 muscle car with a similar level of handling and performance. 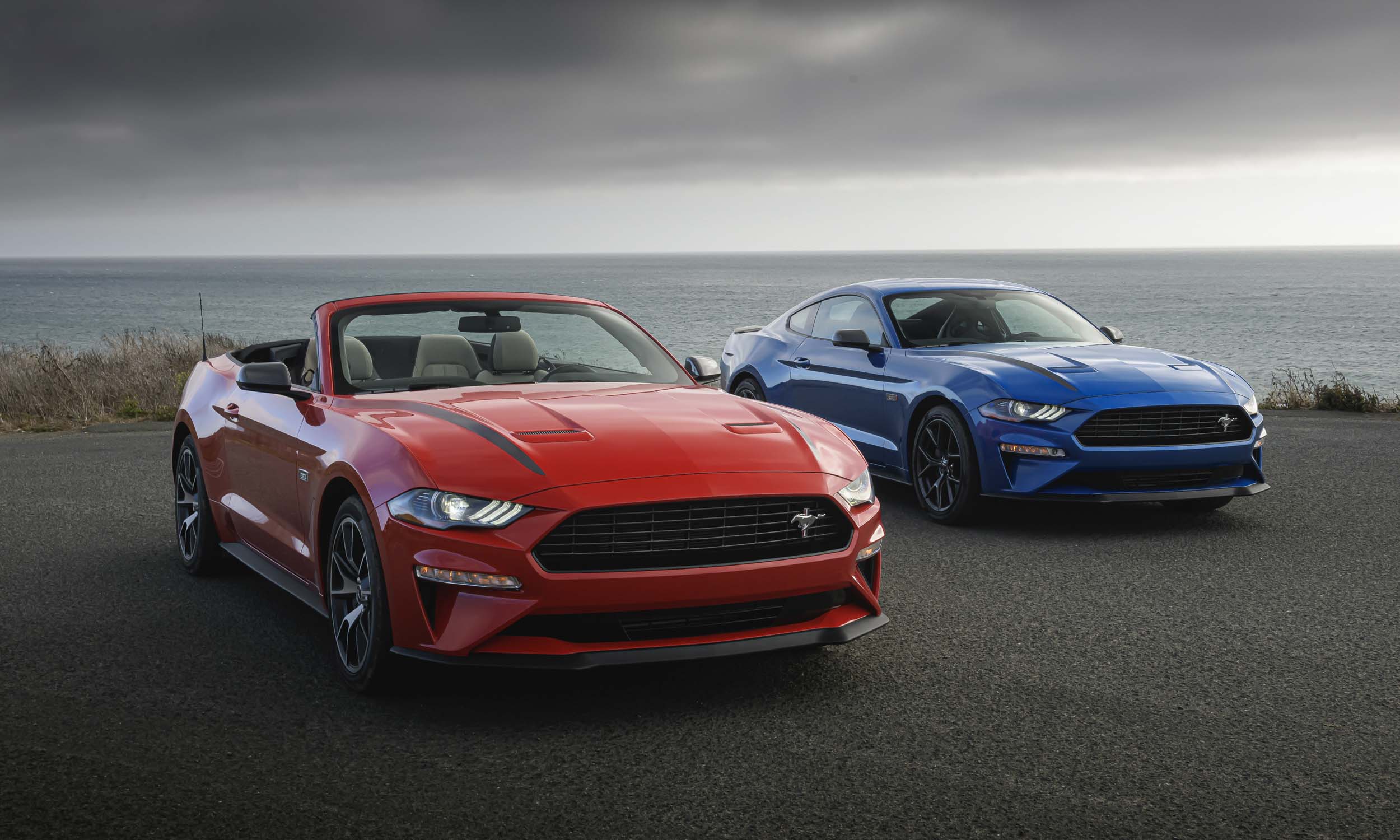