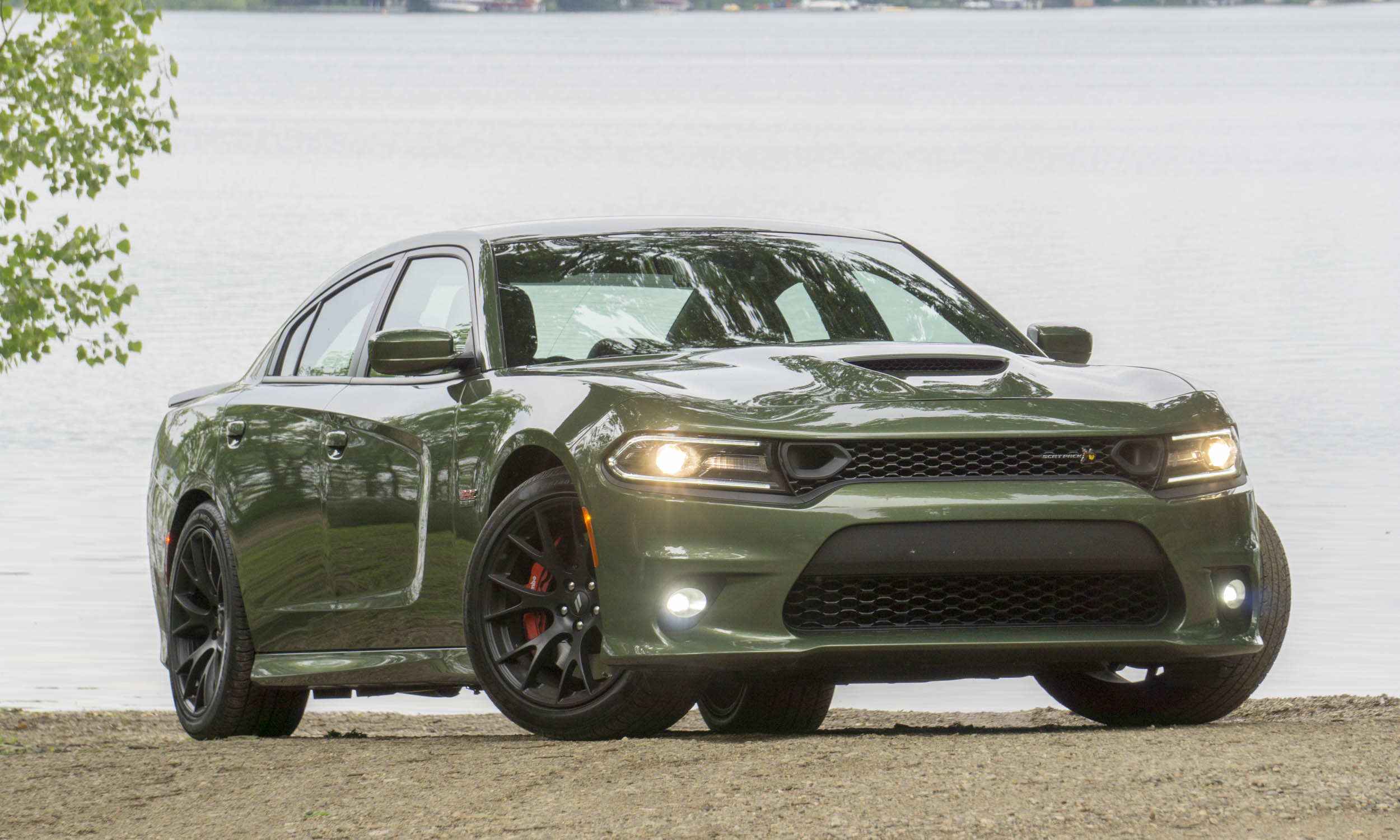 The Real Deal
When U.S. car shoppers consider the latest new models coming from mainstream car companies, it might seem like all consumers want a fuel-efficient electrified crossover. Although with each new model year they become more of a rarity, there are still cars on the market that please enthusiasts. We spent a few days in such a vehicle — the Dodge Charger R/T Scat Pack — and came away with hope that the ideal of the high-powered sedan will never completely die . . . as long as there are vehicles such as this one from Dodge. With mean looks, a roaring V8 exhaust note and power to match, the Charger R/T Scat Pack is the real deal. 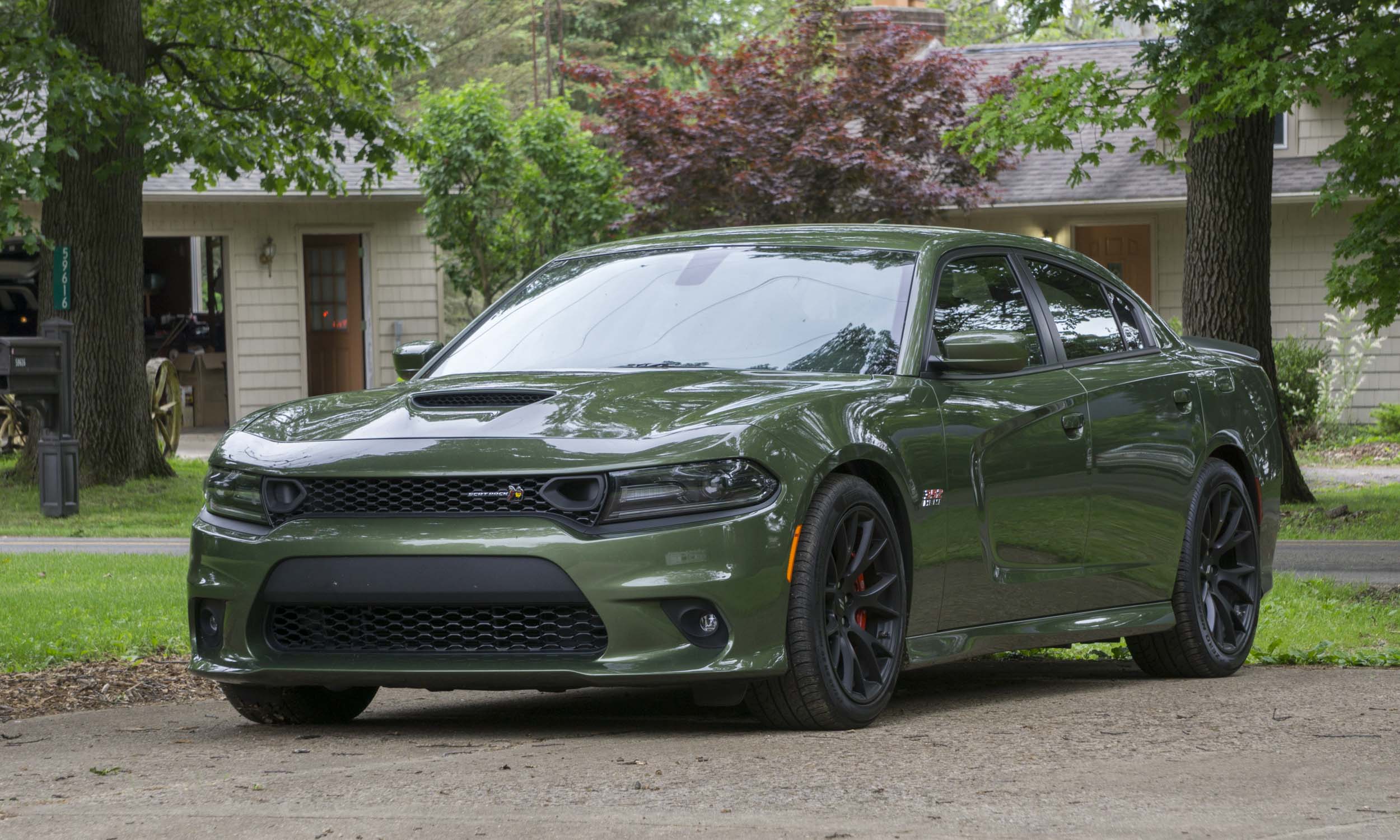 Test Vehicle
Our test vehicle was a 2019 Dodge Charger R/T Scat Pack that carried a total MSRP of $46,075, which included the Dynamics Package, Navigation and Travel Group, adaptive damping suspension and red brake calipers. We tried to conjure up with a list of competitors to this high-powered Charger and couldn’t think of any — sedans of its size typically don’t have the same level of performance, and those that do are much more expensive European models. The Scat Pack Charger stands alone. 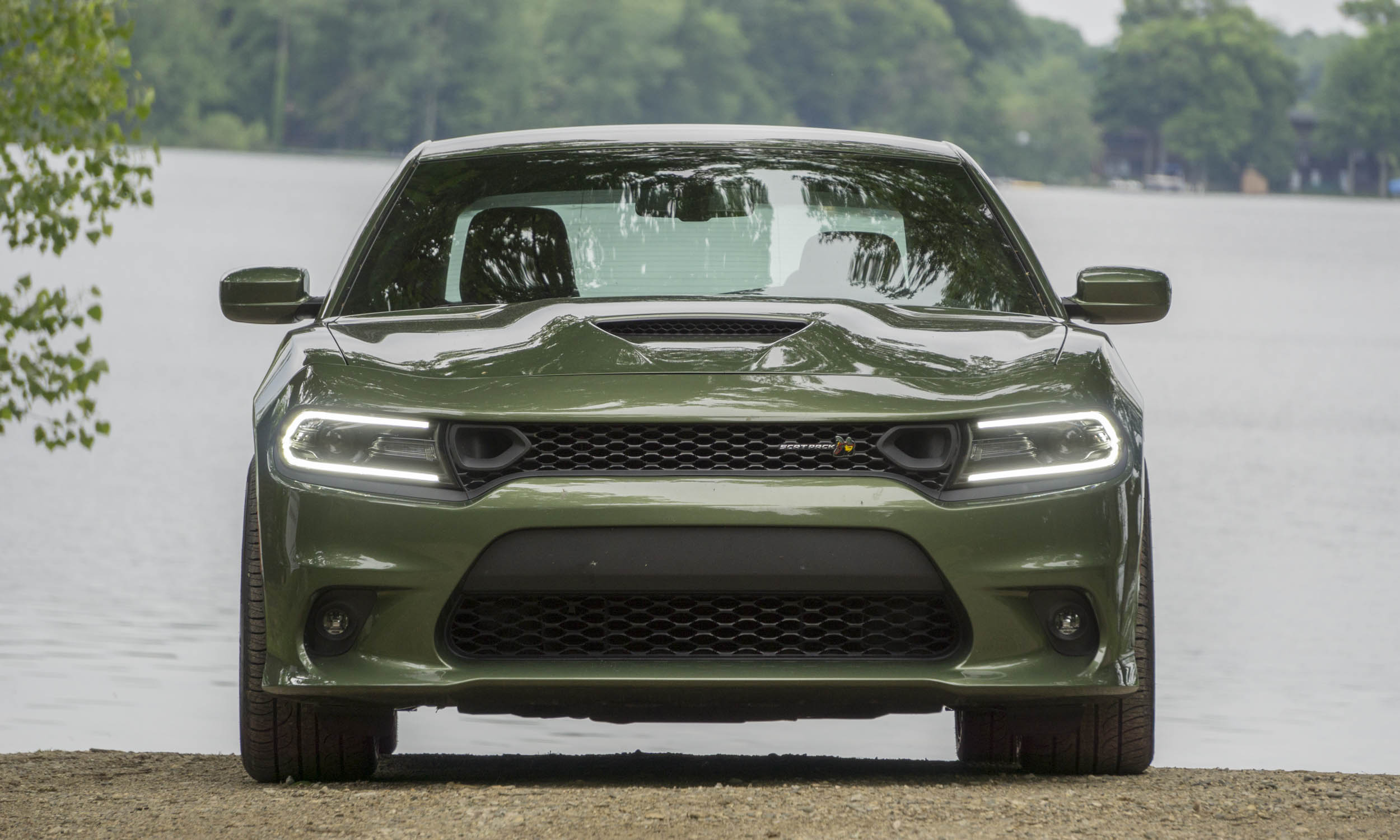 New for 2019
It’s been a while since the Charger was completely redone, so the folks at Dodge made sure there were a few updates for the 2019 model year. Most noticeable is a new performance grille with dual air inlets — the same as found on the vaunted Charger Hellcat. There’s also a new Scat Pack bee logo on the rear decklid. Other additions include standard Launch Assist for the ultimate in acceleration from a stop; easily accessible via a single button on the center console. 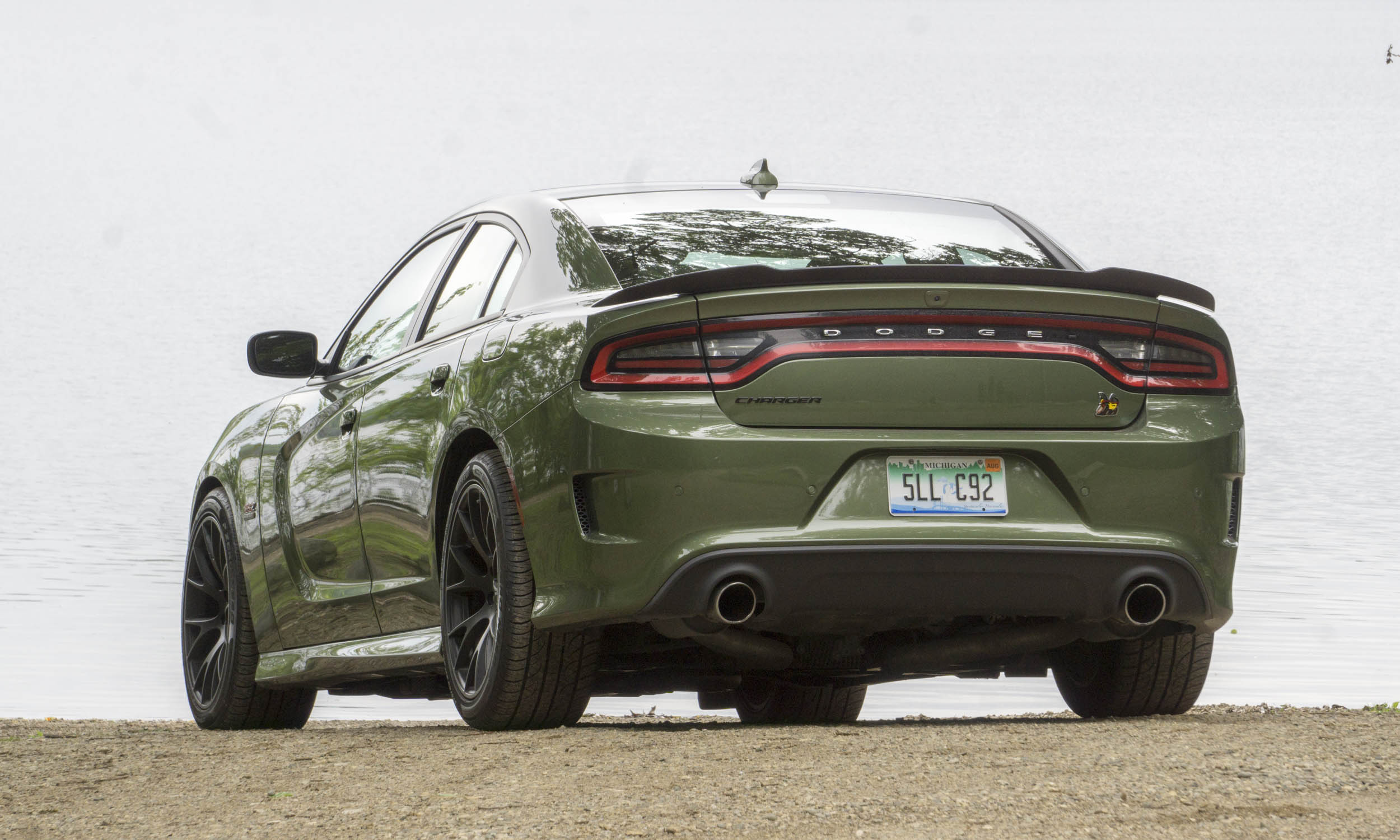 Not a Hellcat
One might think that with a 707-horsepower Charger available, all other models would pale by comparison. But as powerful as the Hellcat may be, the Scat Pack is still plenty potent, and with a price almost $30,000 less than the Hellcat, it is much more appealing to the muscle-car shopper. 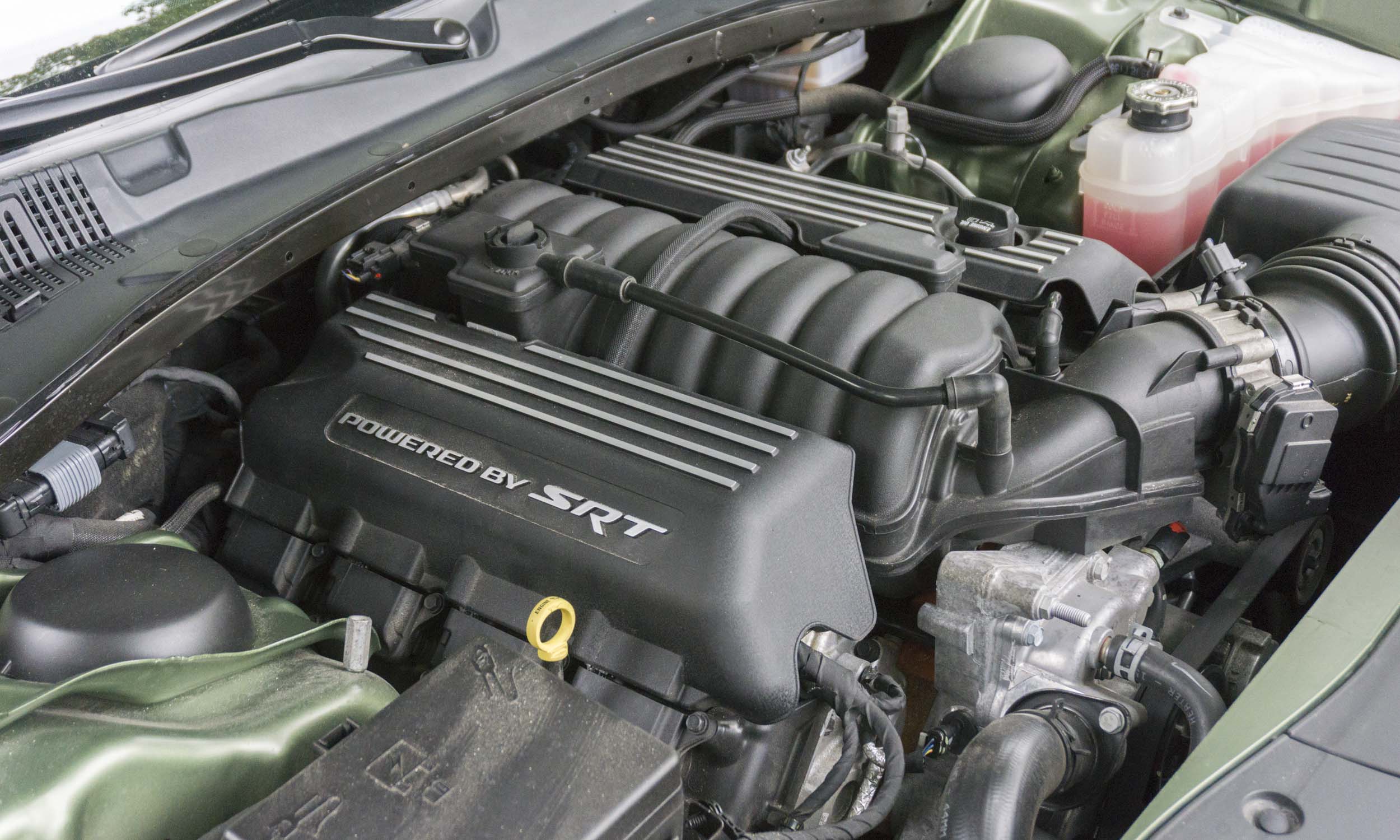 Under the Hood
Powering the Charger R/T Scat Pack is a 6.4-liter HEMI V8 engine that generates 485 horsepower and 475 lb-ft of torque. The engine gets teamed with an 8-speed automatic transmission that can be left to its own devices, or manually shifted via paddles on the steering column. 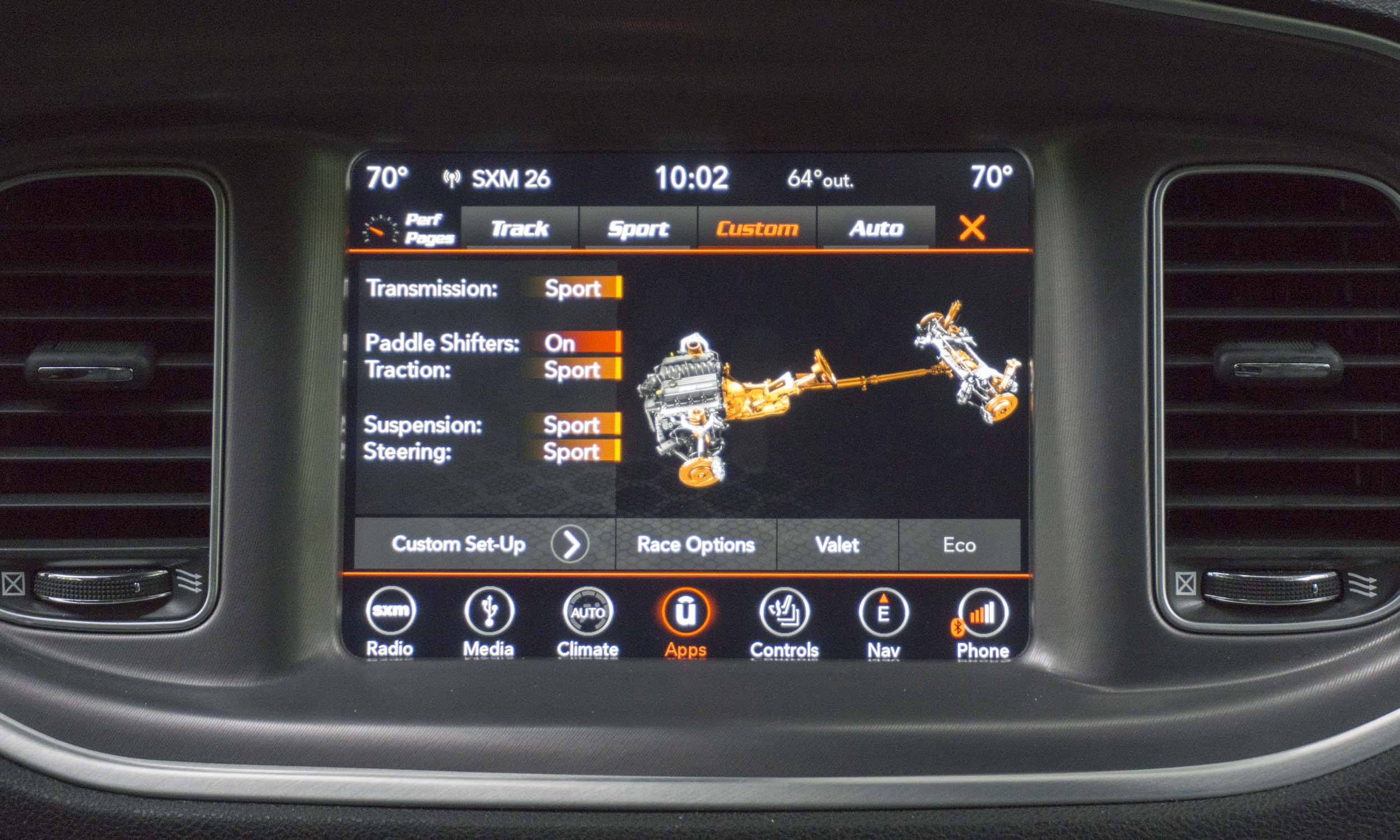 Drive Modes
A driver can choose from different modes to adjust the Scat Pack’s transmission, suspension, steering and traction. Settings can also be customized — for example, a driver may choose to have everything set to Sport but with a comfort suspension if the road is too rough. During our press drive we typically left everything in Sport mode for most of our time behind the wheel. 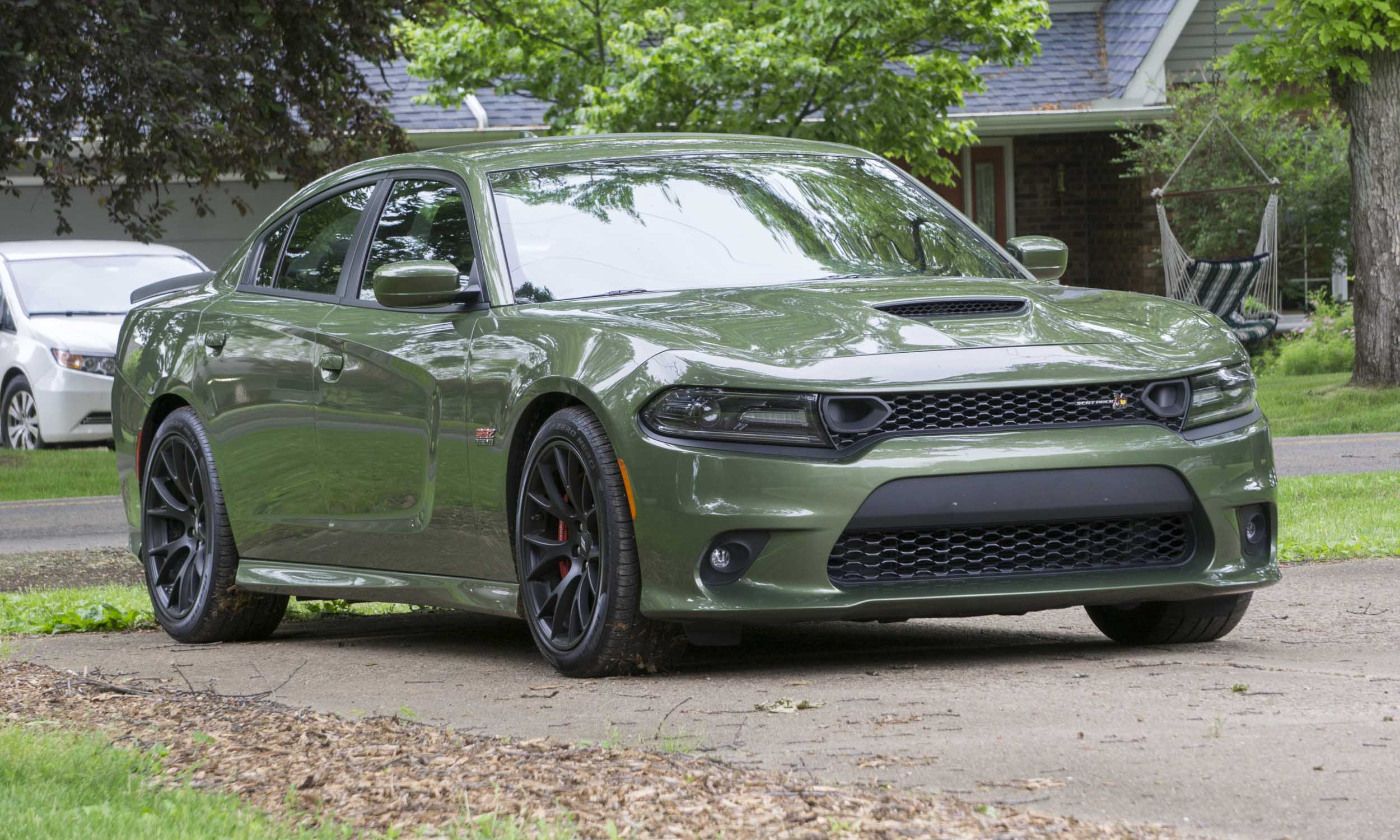 What We Like
The Charger R/T Scat Pack may be a big 4-door sedan, but it certainly has a mean look about it. With its narrow grille, darkened headlights, big hood scoop and sculpted facia, it’s clear this isn’t a typical family sedan. Add in the F8 Green paint along with 20-inch black forged wheels and red brake calipers and suddenly the Charger R/T Scat pack becomes a car that makes its driver want to look back at it while walking away. 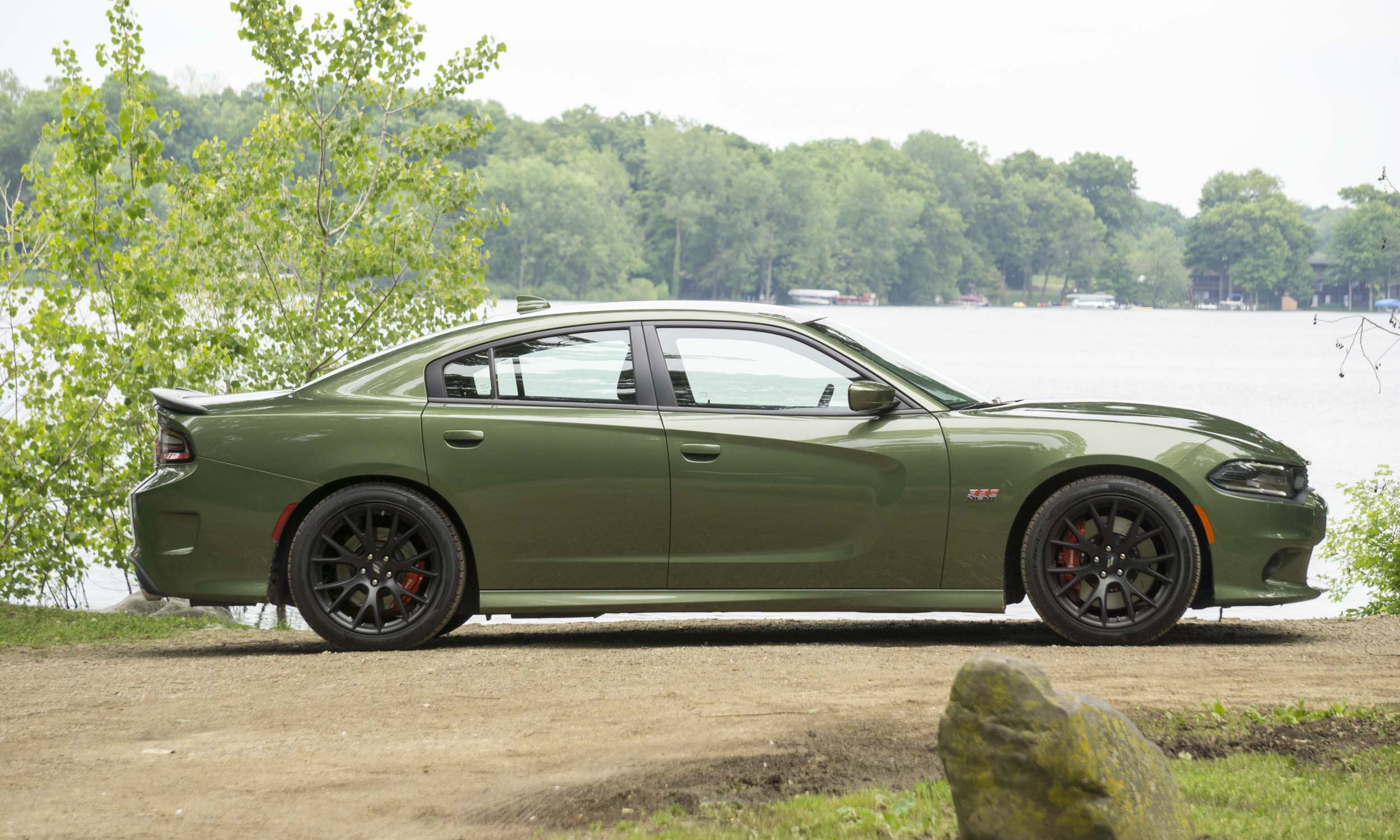 Great Performance
With 485 horsepower on tap, the Charger Scat Pack has power to spare. Acceleration is very strong and thanks to the sticky Pirelli P-Zero performance tires, grip is surprisingly good. Spending several hours driving on winding two-lane back roads in Michigan proved that this Charger is not simply a straight-line car — handling is surprisingly good for such a large sedan. That said, the most fun while driving is approaching slower vehicles; one stab of the throttle and the Scat Pack would be around the slower car in an instant. 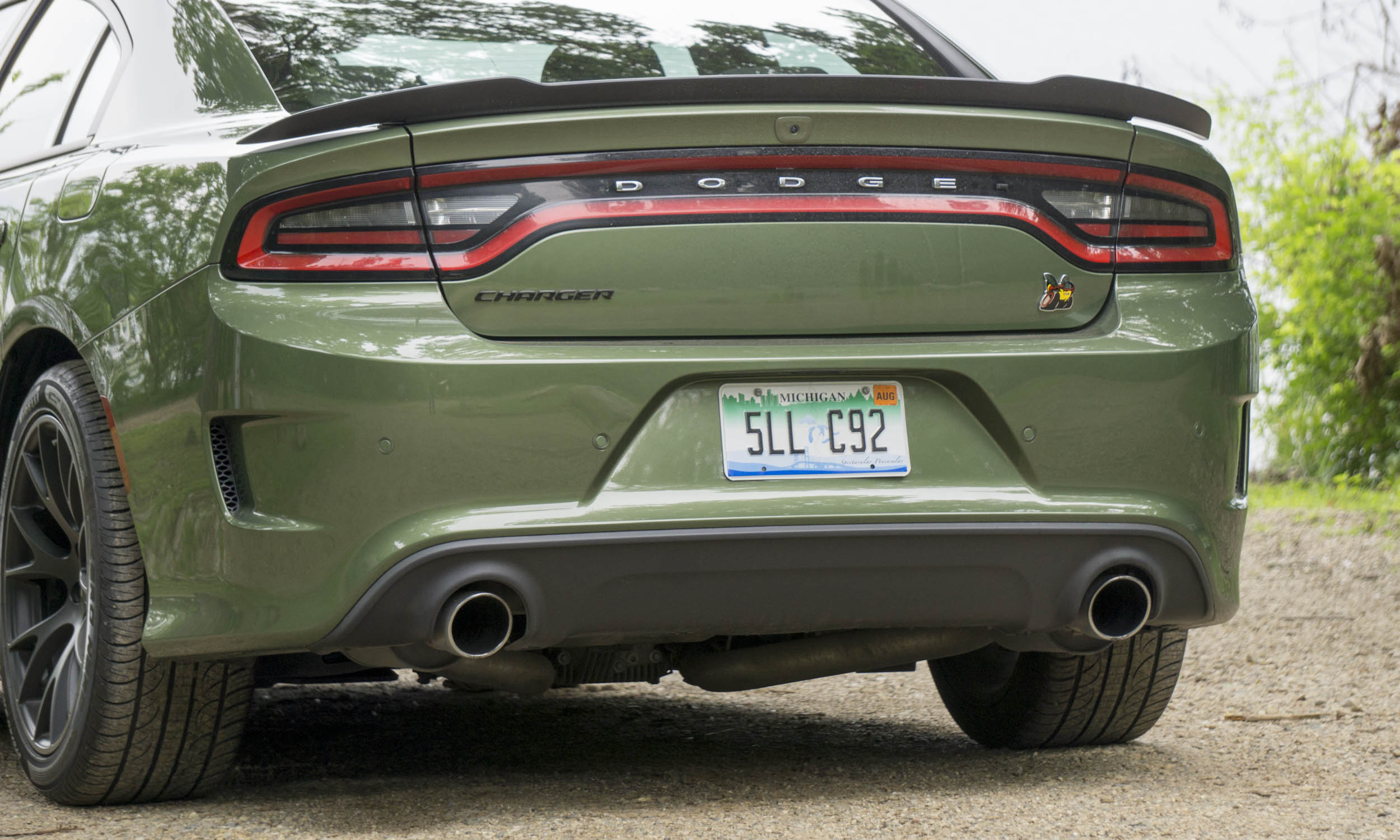 Loud and Proud
As fantastic as the acceleration feels in the Scat Pack, it’s the accompanying roar emanating from the rear pipes that completes the package. Full throttle will turn heads, and never fails to bring a little cackle of joy from behind the wheel. 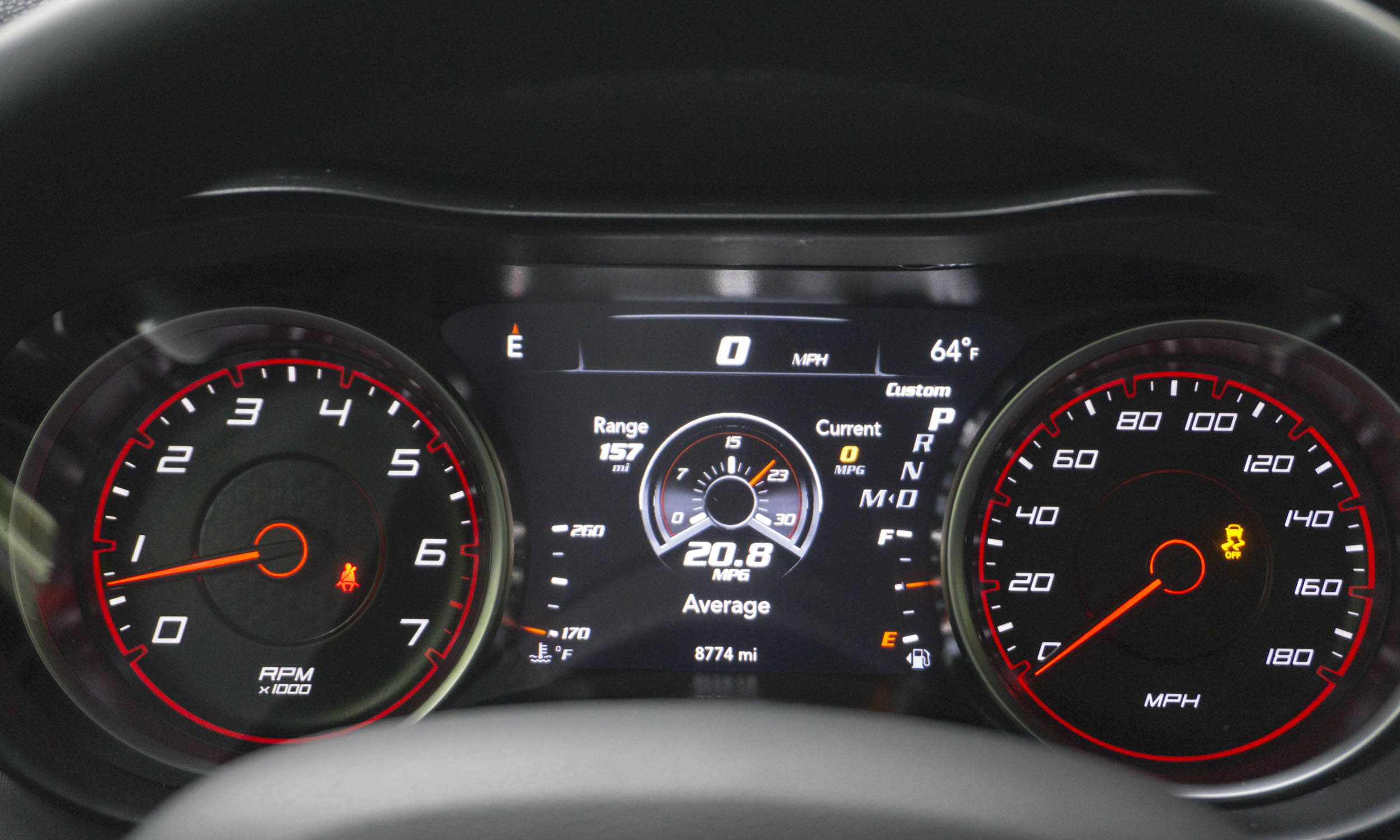 Fuel Efficient?
The thought that a big V8-powered sedan could be fuel efficient seems a bit outrageous, but with a decent amount of highway driving our fuel economy held steady above 20 mpg. 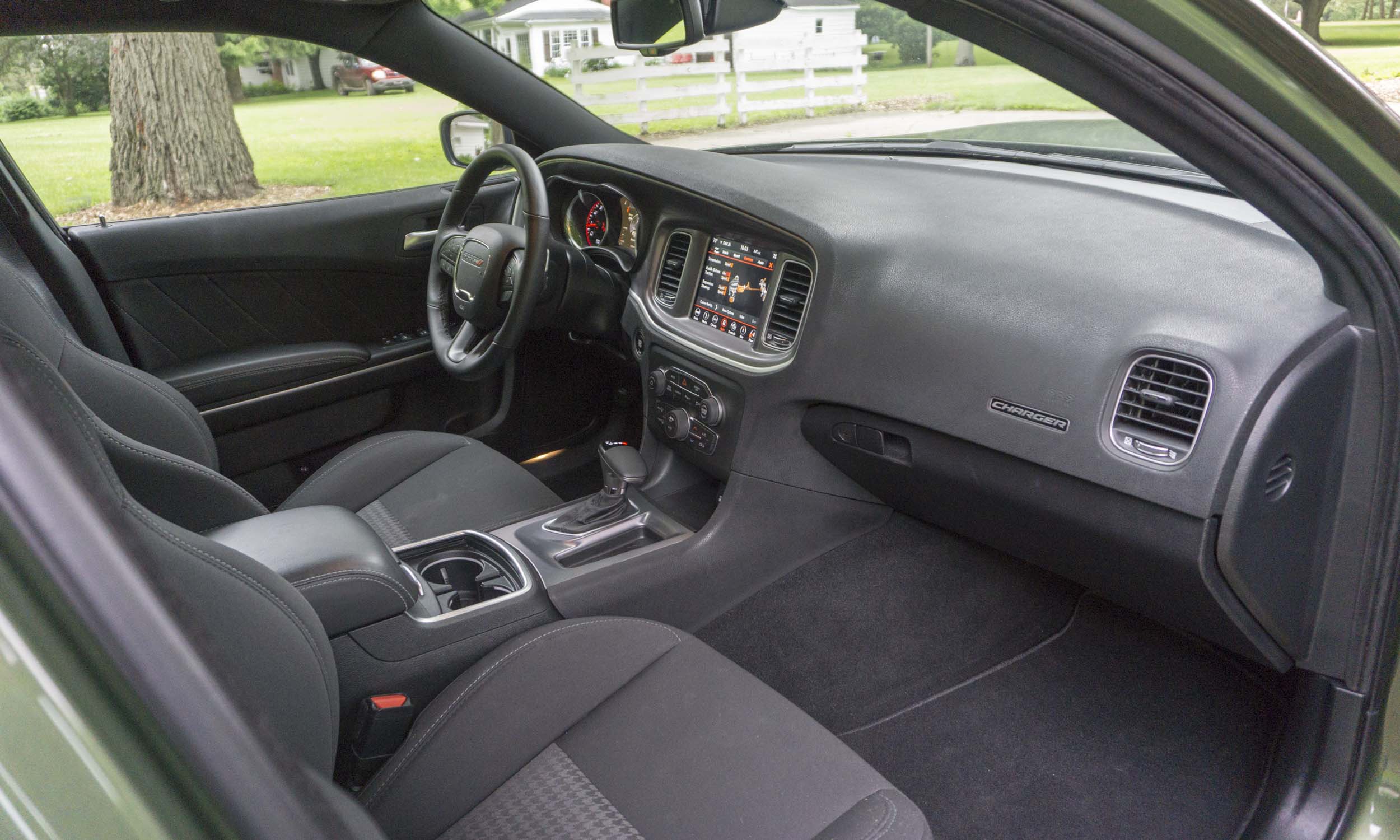 Basic Interior
Some may see this as a negative, but if performance is the primary goal then there’s no need to pay for a fancy interior. The Charger R/T Scat Pack seats are cloth covered, but still big and comfortable with nice side bolsters. There is a lot of basic black plastic on the dash and in the center console. But there also is plenty of storage space with multiple cupholders and locations for electronics, and the touchscreen display is large and easy to navigate. 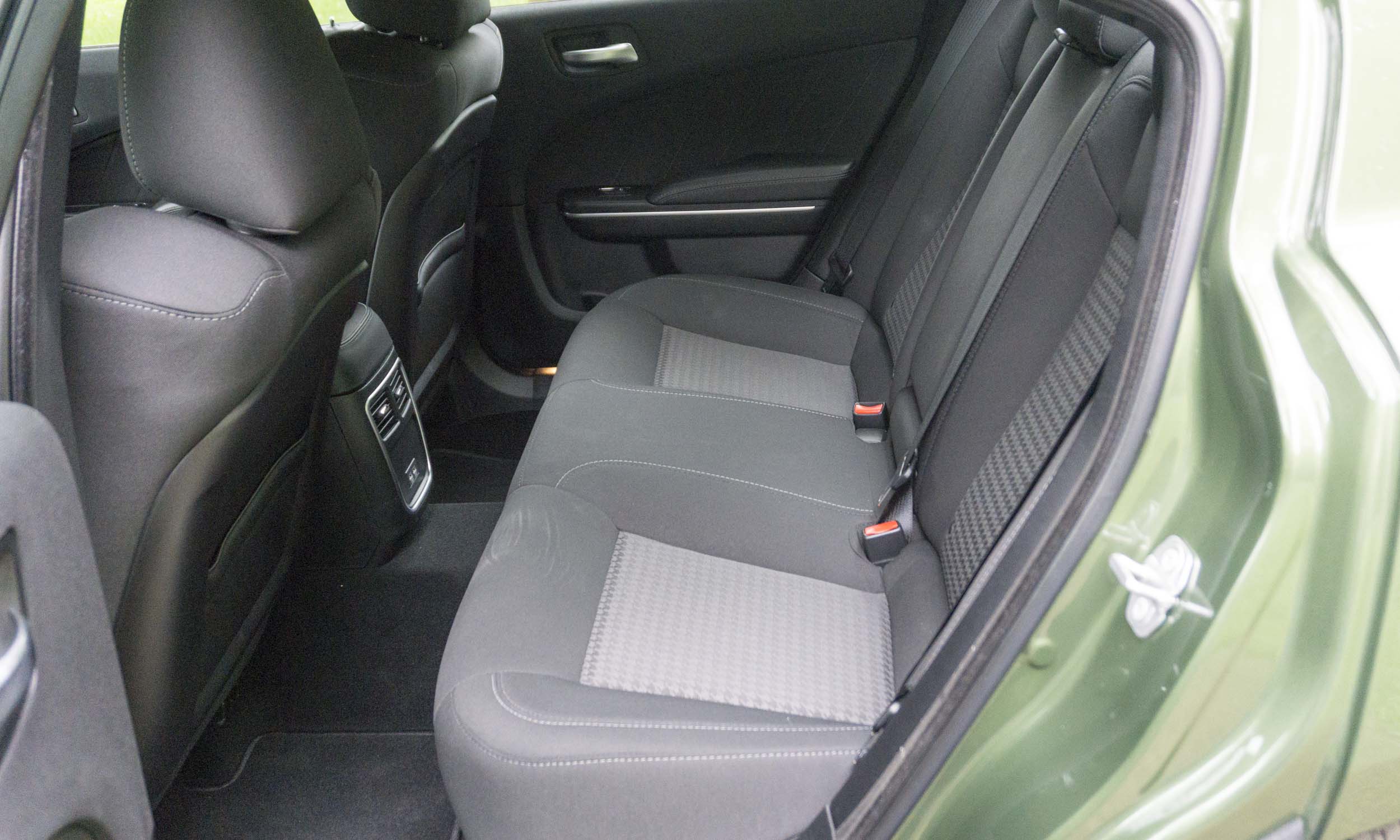 Plenty of Space
It may not be your typical family sedan, but the Charger can certainly act the part when needed. The rear seat is large and offers plenty of legroom. Middle-seat passengers may be a bit cramped, but if necessary three adults could easily fit in the rear seat. There are even two USB outlets for passengers to keep their devices charged. 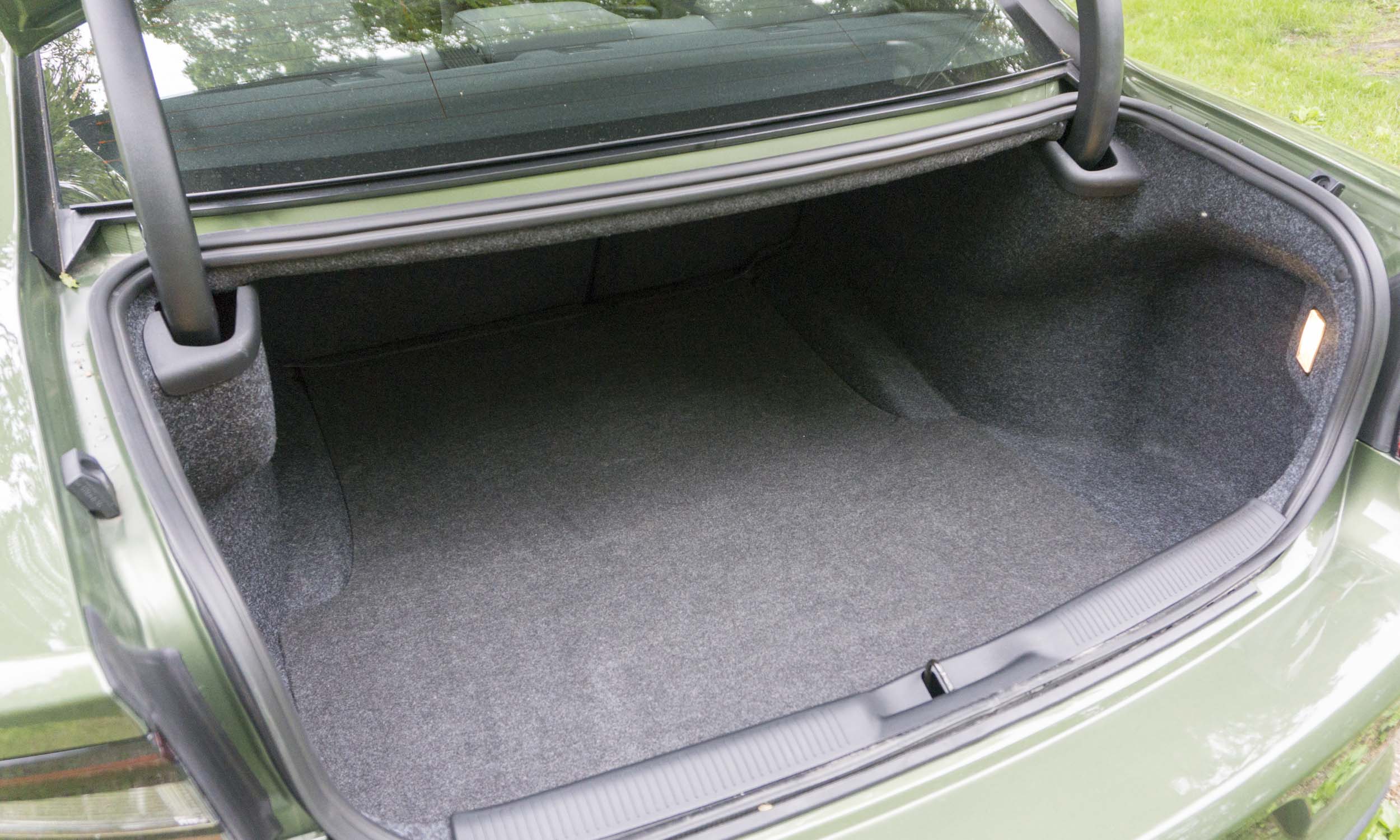 Big Trunk
Again, Charger is a large car — which means there’s room for multiple suitcases or whatever one might need to haul in the trunk. 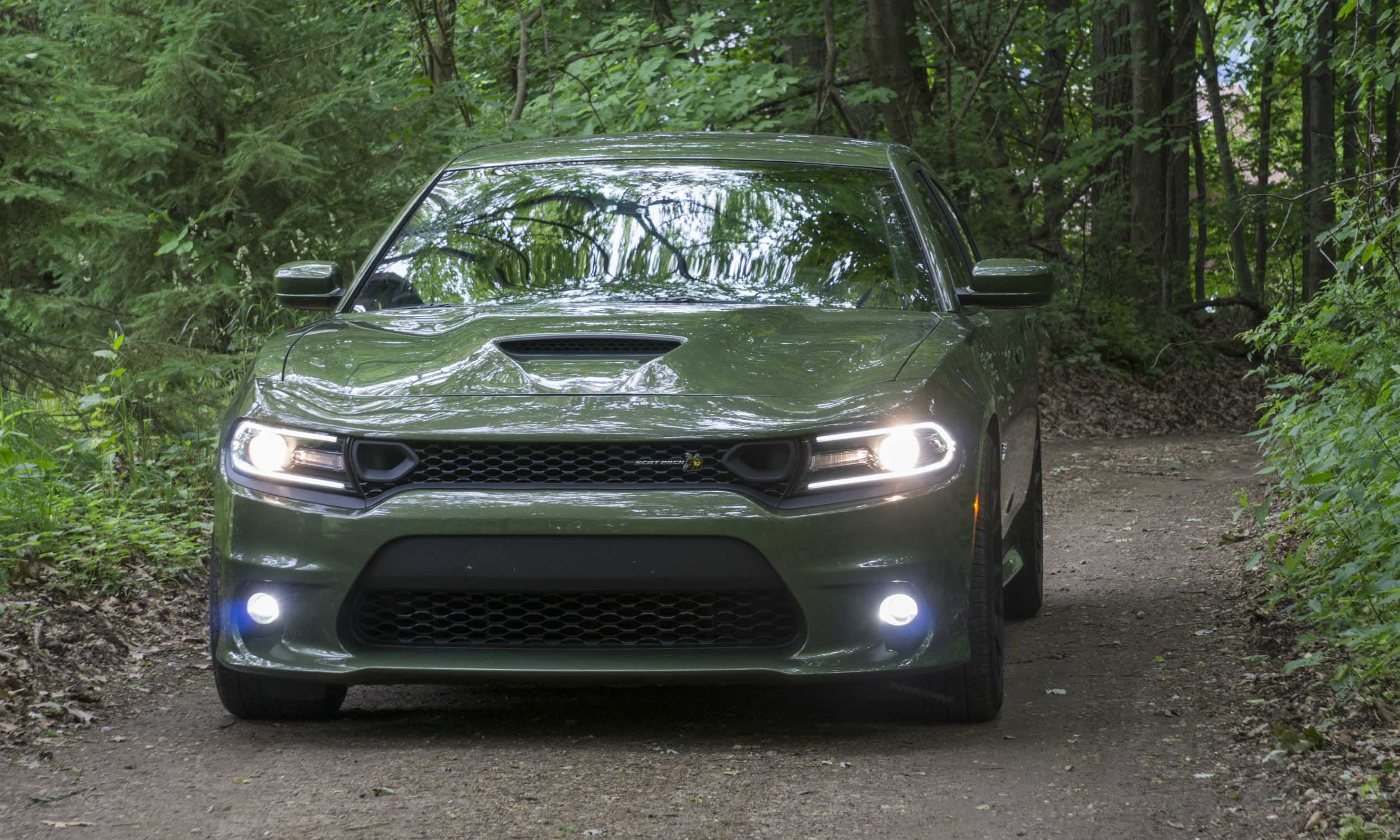 Safety Features Extra
Our primary complaint about the Charger Scat Pack is that it doesn’t have standard safety features such as automatic emergency braking or blind-spot warning. Even though these would likely bring the price up, there really shouldn’t be any new cars on the road anymore that don’t have these advanced features as standard equipment. 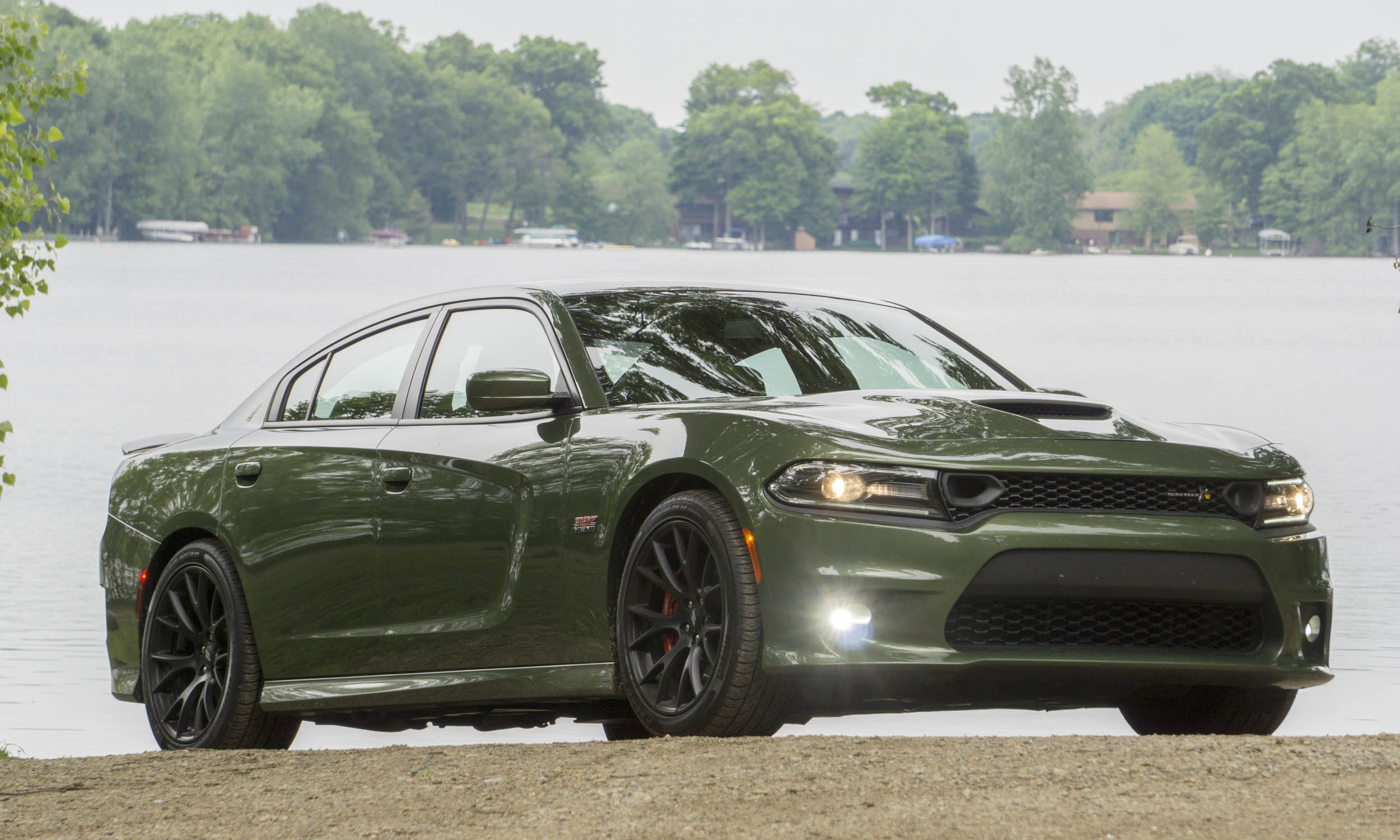 Rating: 8.5
In this era of electrified, fuel-efficient crossovers, the Dodge Charger R/T Scat Pack is a breath of fresh air for those who remain automotive enthusiasts. With aggressive styling, a roaring exhaust note and a powerful V8 under the hood, the Charger R/T Scat Pack might not be politically correct, but it certainly is fun. And with plenty of space for passengers and cargo and the ability to exceed 20 mpg, it certainly works as a daily driver. The only challenge will be keeping the roaring to a minimum.