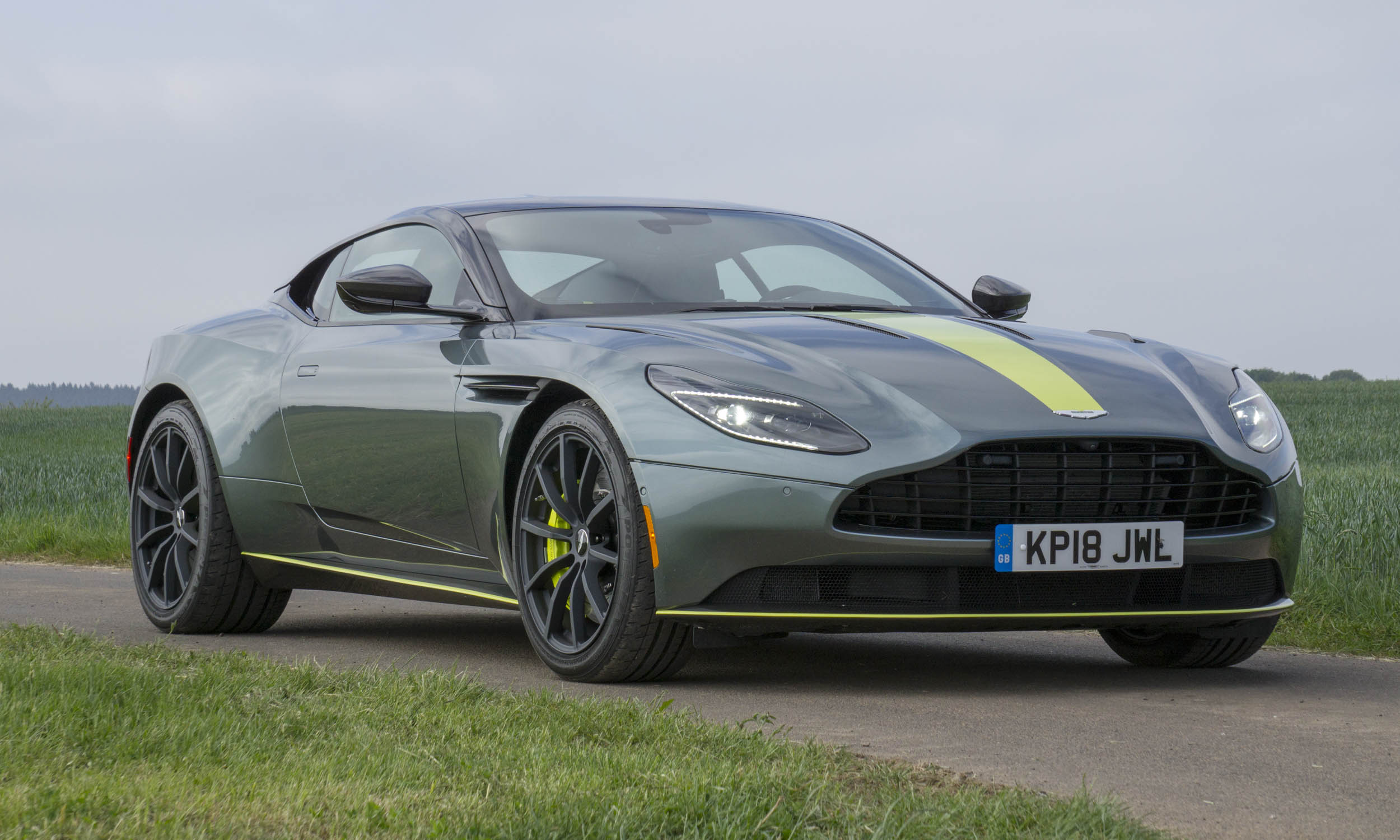 Quick Improvements
Within a small car company such as Aston Martin, changes to product can occur much more rapidly than within large assembly plants building millions of vehicles. When Aston came out with the DB11 V8, there were attributes that made it a better car to drive than the more powerful V12 version. Now those changes have been applied to the V12, creating the best-driving and most powerful production DB11 available — the all-new DB11 AMR. 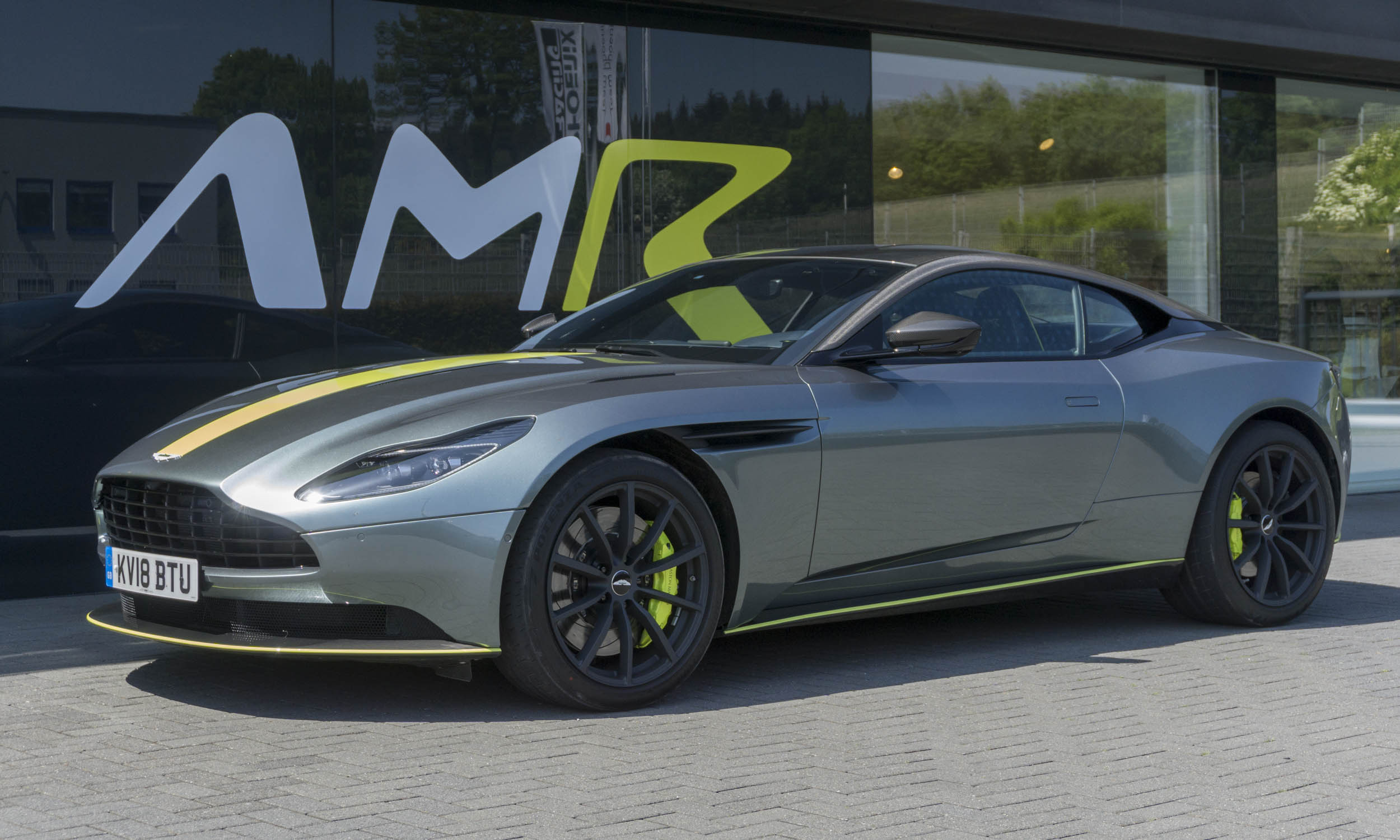 Aston Martin Racing
AMR stands for Aston Martin Racing, which is the badge the brand uses to designate the highest-performance examples of each model range. That said, the AMR badge does not necessarily mean that a vehicle is intended for racing or track driving. Aston designers and engineers created the DB11 V12 AMR as a GT car. Even though the car would be quite enjoyable on the track, it is built for the street. 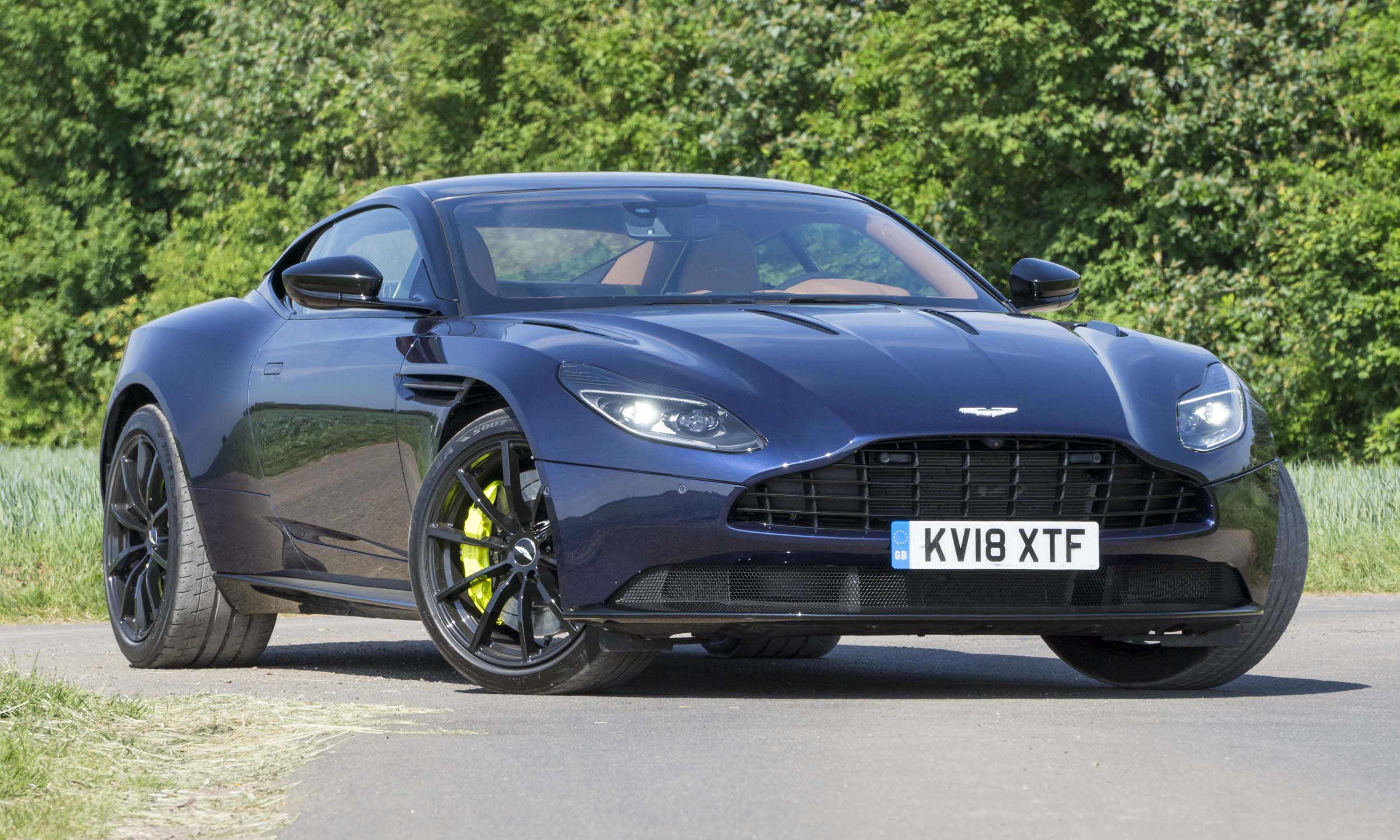 Curated Enhancements
Aston Martin President & Chief Executive Officer Dr. Andy Palmer said of the DB11 AMR: “Since its initial launch back in 2016 the DB11 range has matured rapidly and intelligently, selling close to 4,200 V12 examples in that period. With the exceptional V8 Coupe and Volante we felt the V12 could reveal more of its sporting potential, while remaining the consummate GT. By applying a suite of carefully considered performance and styling enhancements the DB11 AMR is both faster — 208mph! — and more precise. It’s a combination that engages and cossets in equal measure to create a dynamic and seductive new flagship for the DB11 range, while consolidating the existing V12-powered DB11s as future collectibles.” 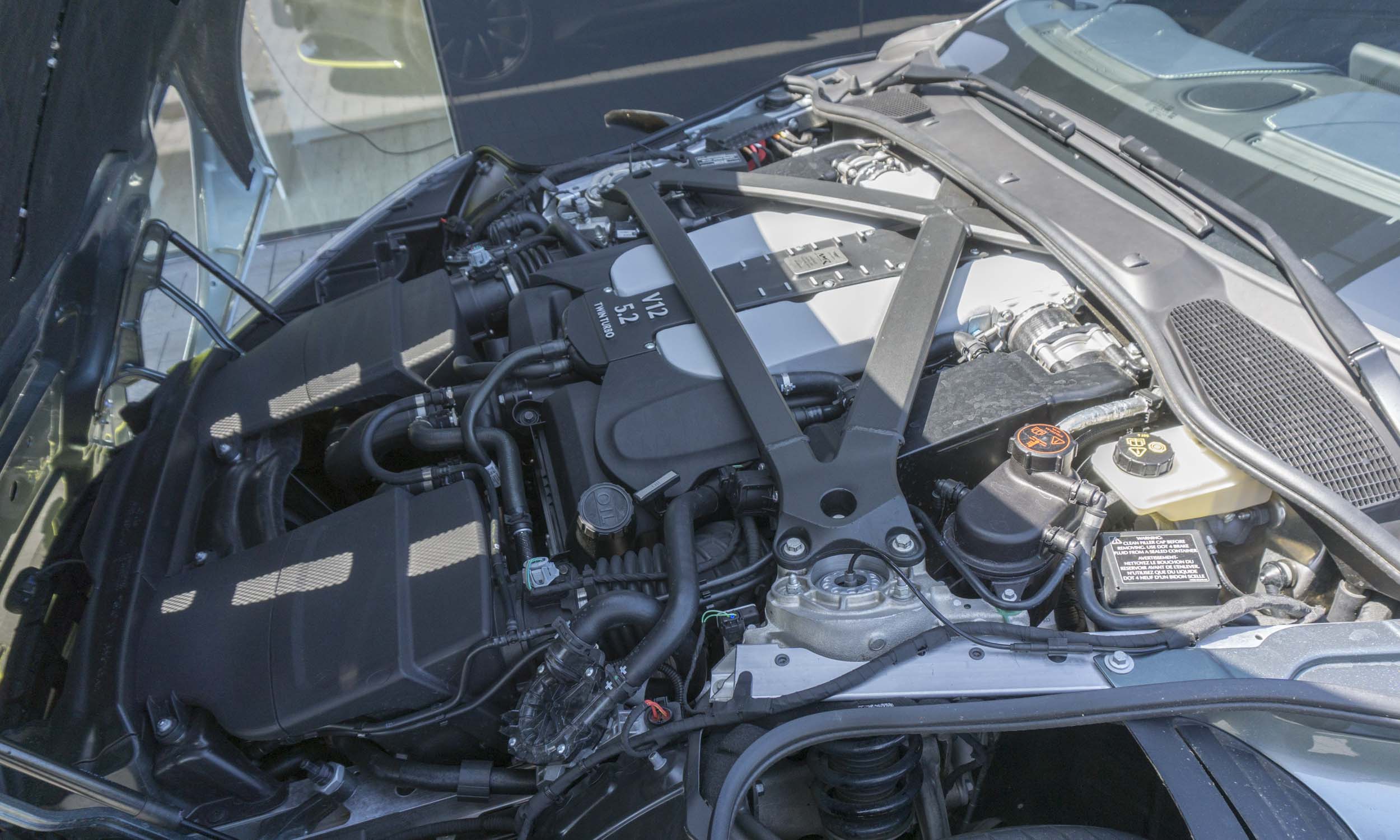 More Power
The DB11 V12 AMR derives power from a 5.2-liter twin-turbocharged V12 engine that produces 630 horsepower — an increase of 30 horses versus the previous V12. Torque remains at 516 lb-ft; however, peak torque lasts a bit longer with the revised engine. The engine management system has been retuned slightly for better responsiveness. 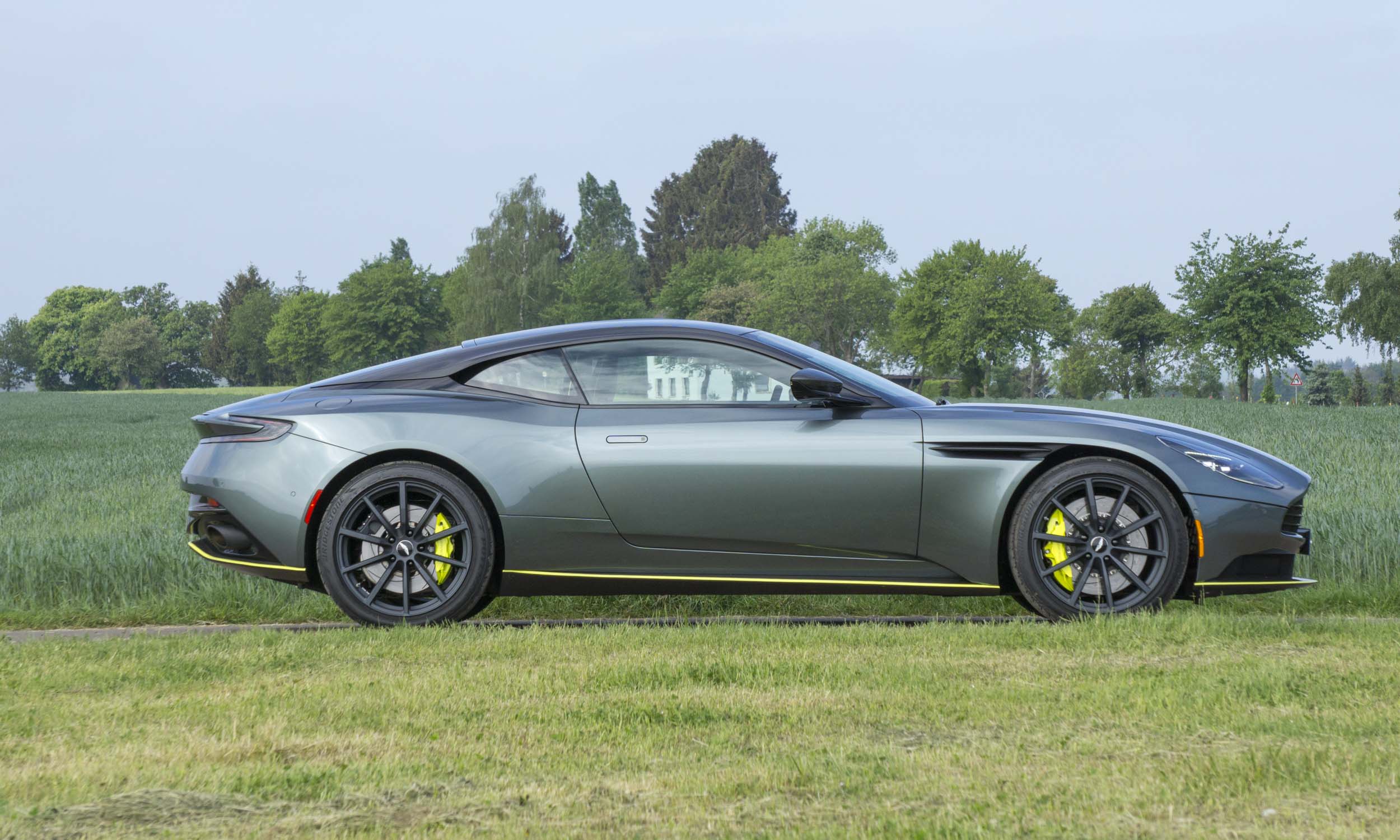 Improved Performance
The added power translates into the V12 AMR becoming slightly faster than the outgoing V12, reaching 60 mph in 3.5 seconds and achieving a top speed of 208 mph. We hear there is still more power to be squeezed from this V12, but that may have to wait for the upcoming DBS. 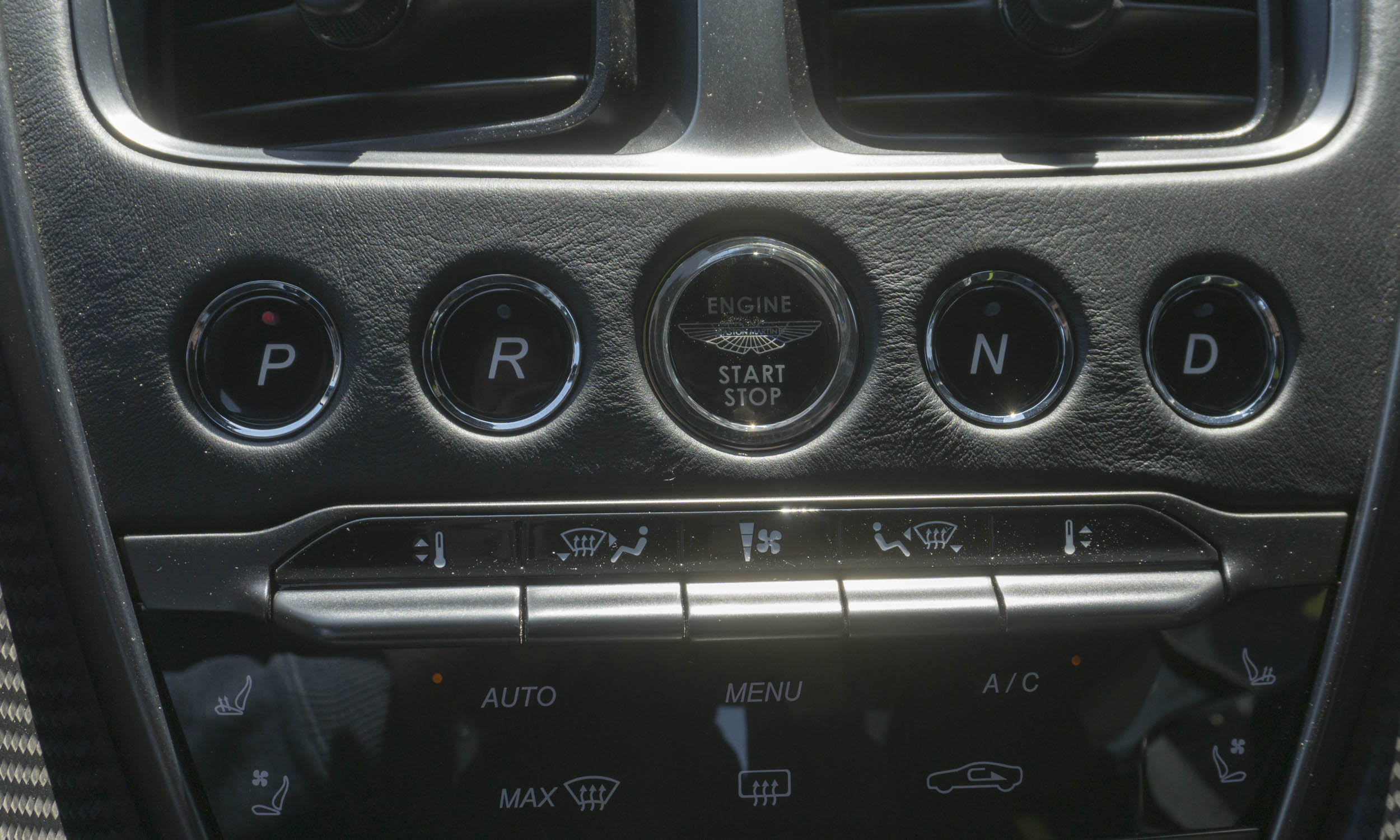 Quick Shifting
As with most high-end and exotic sports cars, a manual transmission has become a relic of the past. The DB11 V12 uses an 8-speed automatic gearbox that can be shifted via paddle shifters or allowed to change mon its own. The transmission in the AMR has been tweaked to better differentiate between drive modes. When set in Sport Plus mode, the shifts are extremely quick and aggressive, while in GT mode gear changes are so smooth they are almost imperceptible. Although driving purists will always prefer a manual gearbox, there’s no question that this automatic can shift much faster than humanly possible. 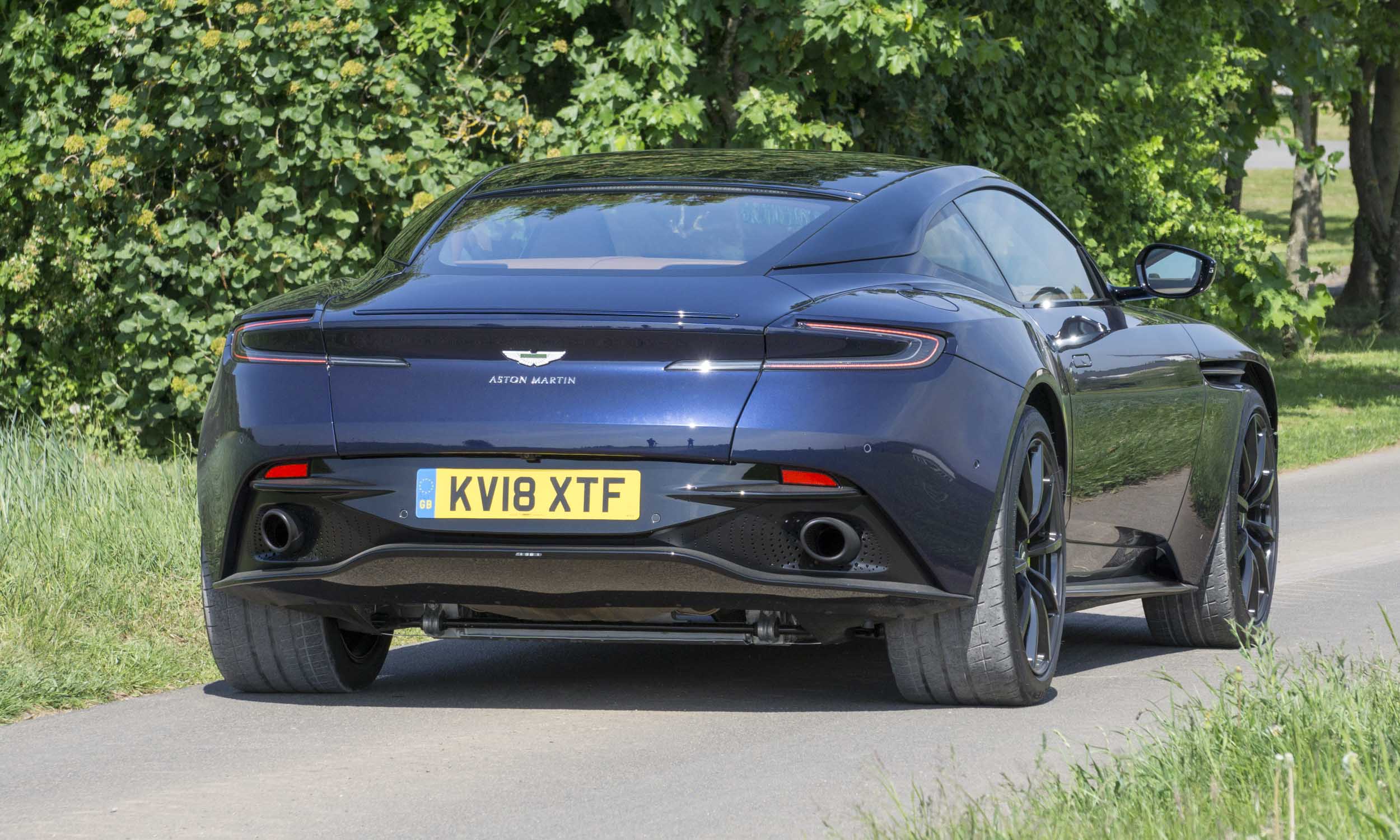 Better Handling
Aston Martin engineers were able to improve overall handling without taking anything away from the DB11’s ride. The chassis has been made a bit stiffer, the adaptive damping system has been revised and steering is more responsive for better lateral acceleration and overall improved handling. In addition, the ESP system has been retuned, enabling it to manage slip a bit more accurately with much smoother intervention. 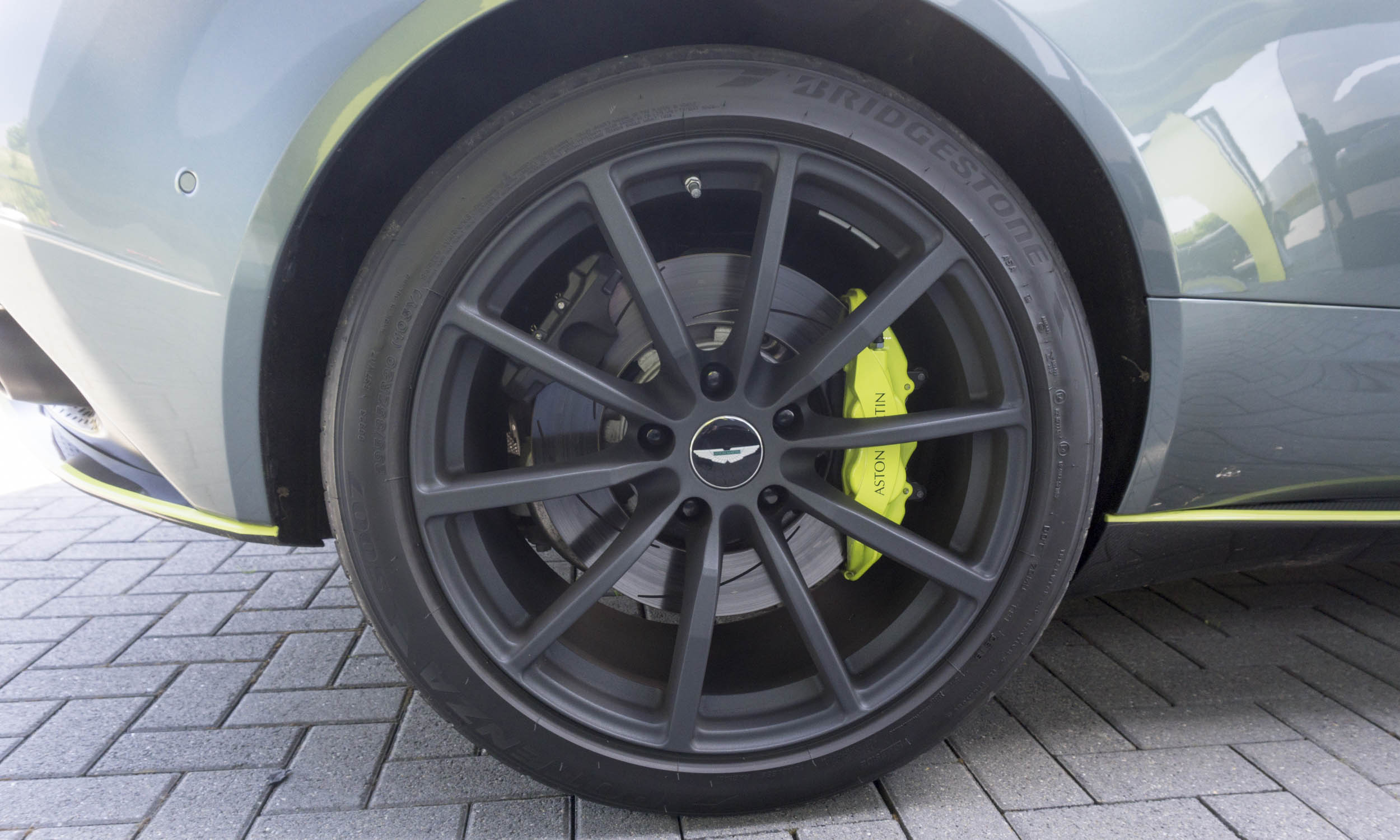 Lighter Wheels
The DB11 AMR gets fitted with 20-inch forged alloy wheels which not only look good, they save almost eight pounds per corner, further improving overall agility. 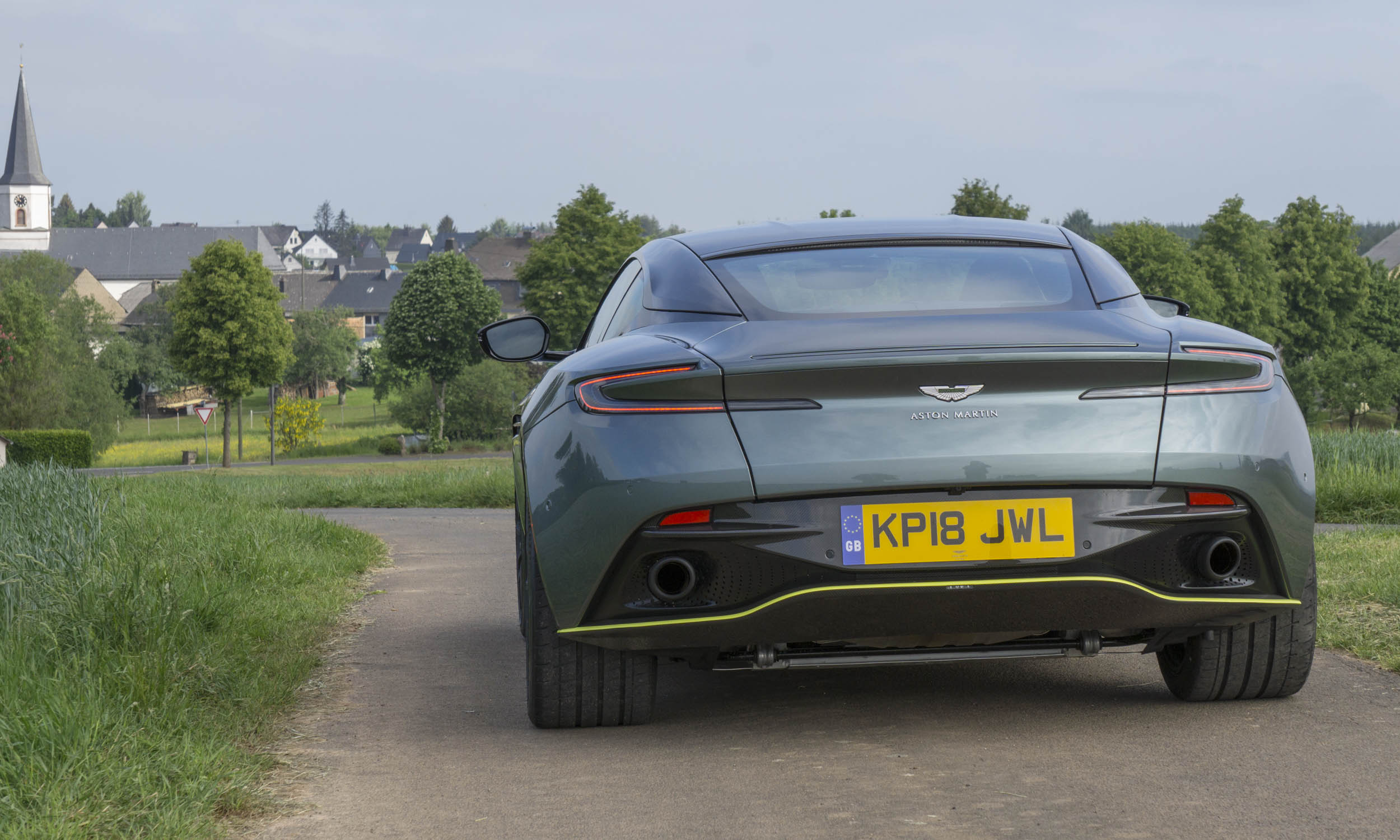 Snap, Crackle, Pop
The 2019 DB11 AMR also has a retuned exhaust system that improves those ear-pleasing crackles and pops when the driver lifts a foot from the throttle pedal. This aural symphony rises to a crescendo when the car is set to Sport Plus mode. The exhaust remains pleasing but muted in GT mode. 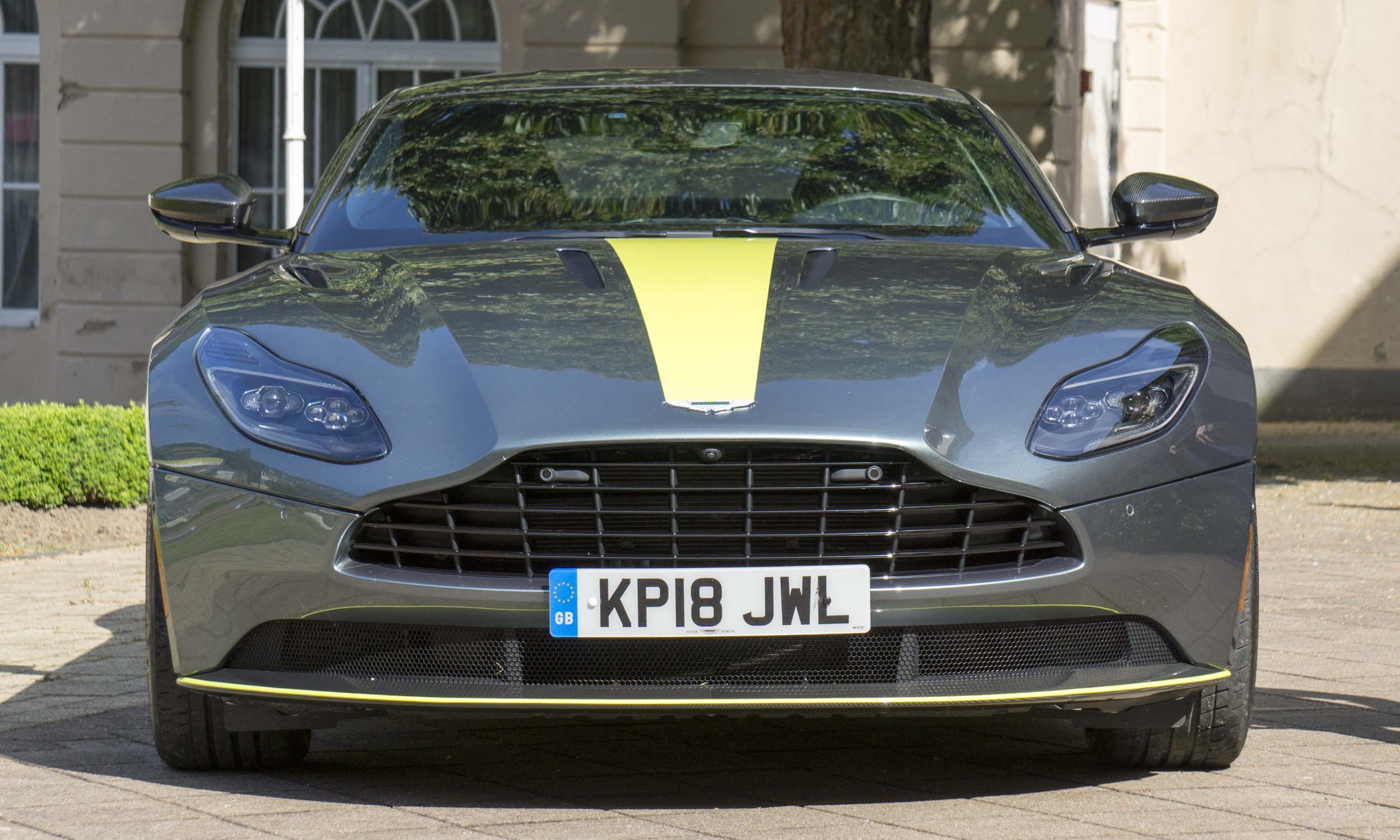 Going Dark
We’ve always loved the look of the DB11 — both coupe and convertible — but Aston Martin has made the new DB11 AMR look a bit more sinister than its lesser-powered siblings. All of the brightwork has been removed for a monochromatic look. Headlights and taillights feature smoked glass, the grille is darkened as are the tailpipes. Forged black wheels complete the look. But it’s not all darkness — bright green calipers add a nice contrasting note. 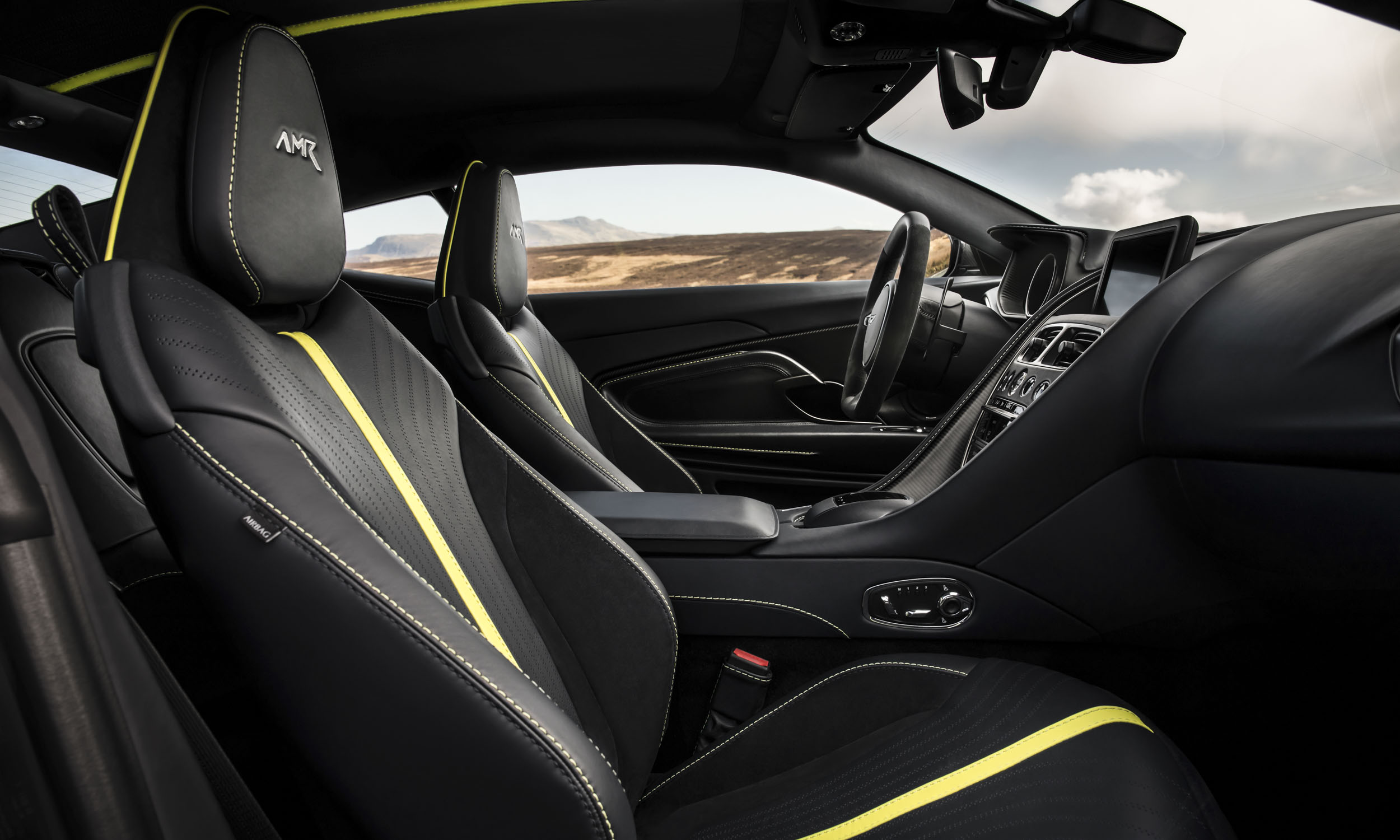 Beautiful Cabin
The interior of the DB11 is as attractive as the exterior, with sport seats trimmed in leather and Alcantara. Thanks to multiple adjustments, the front seats are not simply good looking but extremely comfortable, even after several hours on the road. Pronounced side bolsters are effective at keeping the driver and front passenger stable during spirited driving, but at the same time seats don’t feel tight. Like the exterior, there are green highlights throughout, including stripes on the seats as well as piping and stitching. 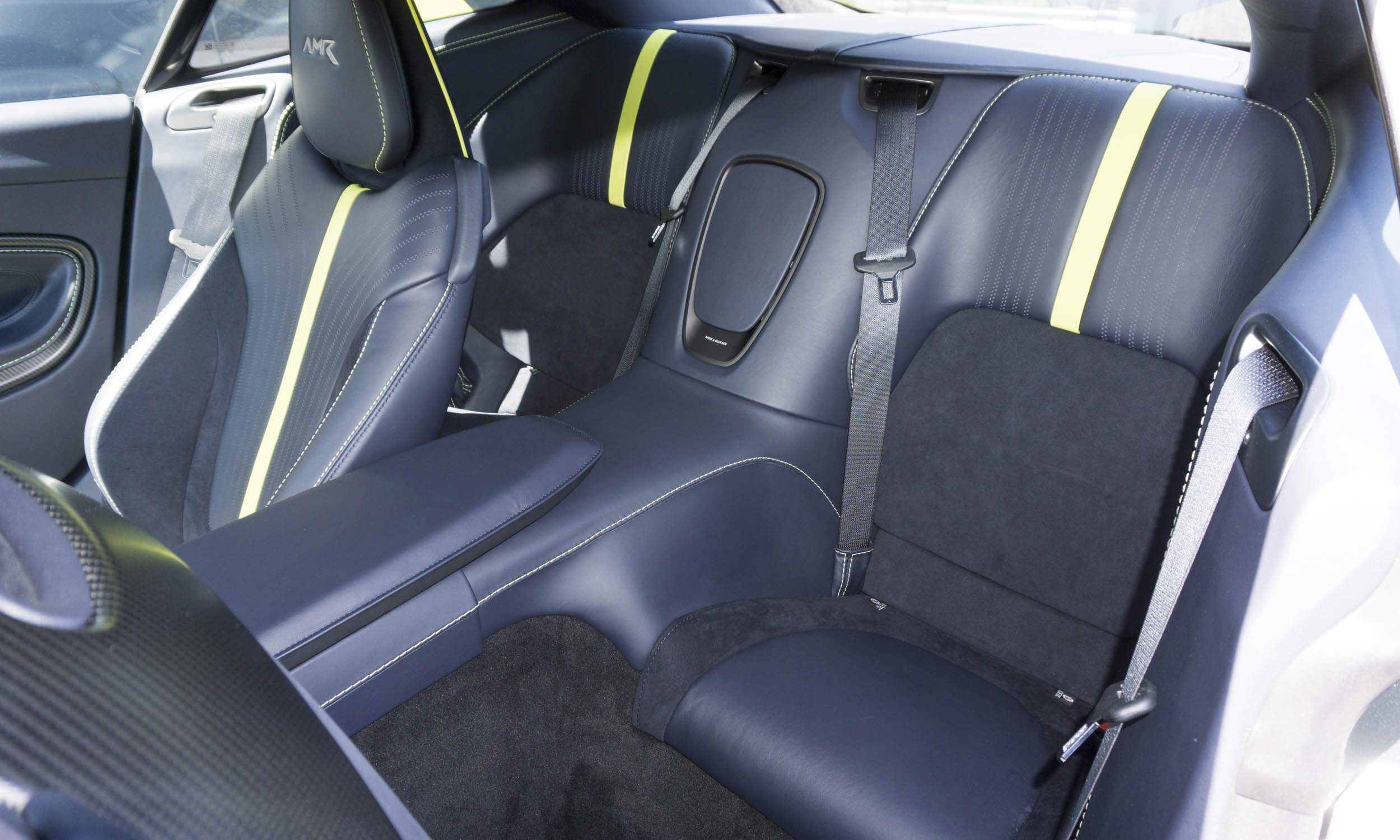 Usefulness
As a grand touring car, the DB11 actually offers more utility than a typical supercar. There is a rear seat, and while it offers more practical use as additional interior storage, it is usable by humans although they might feel a bit cramped back there. The center console has two USB ports, and there is even space for water bottles in the doors. Unfortunately the power-operated lid for the center console seems unnecessary and likely to easily break. 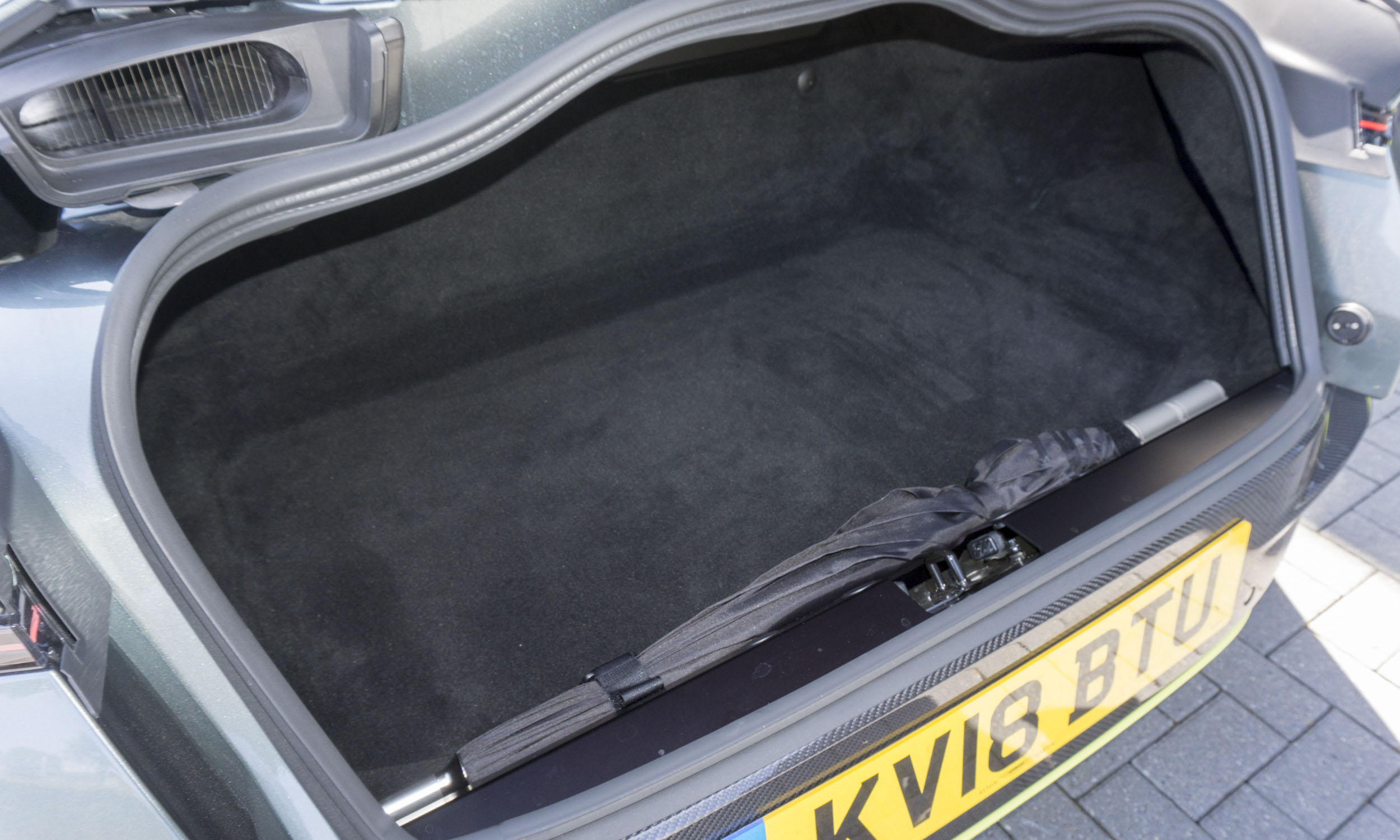 Trunk Space
The trunk is more than adequate, with space for a few small pieces of luggage. Buyers who live in inclement regions may spring for an optional Aston Martin umbrella stored in the trunk. 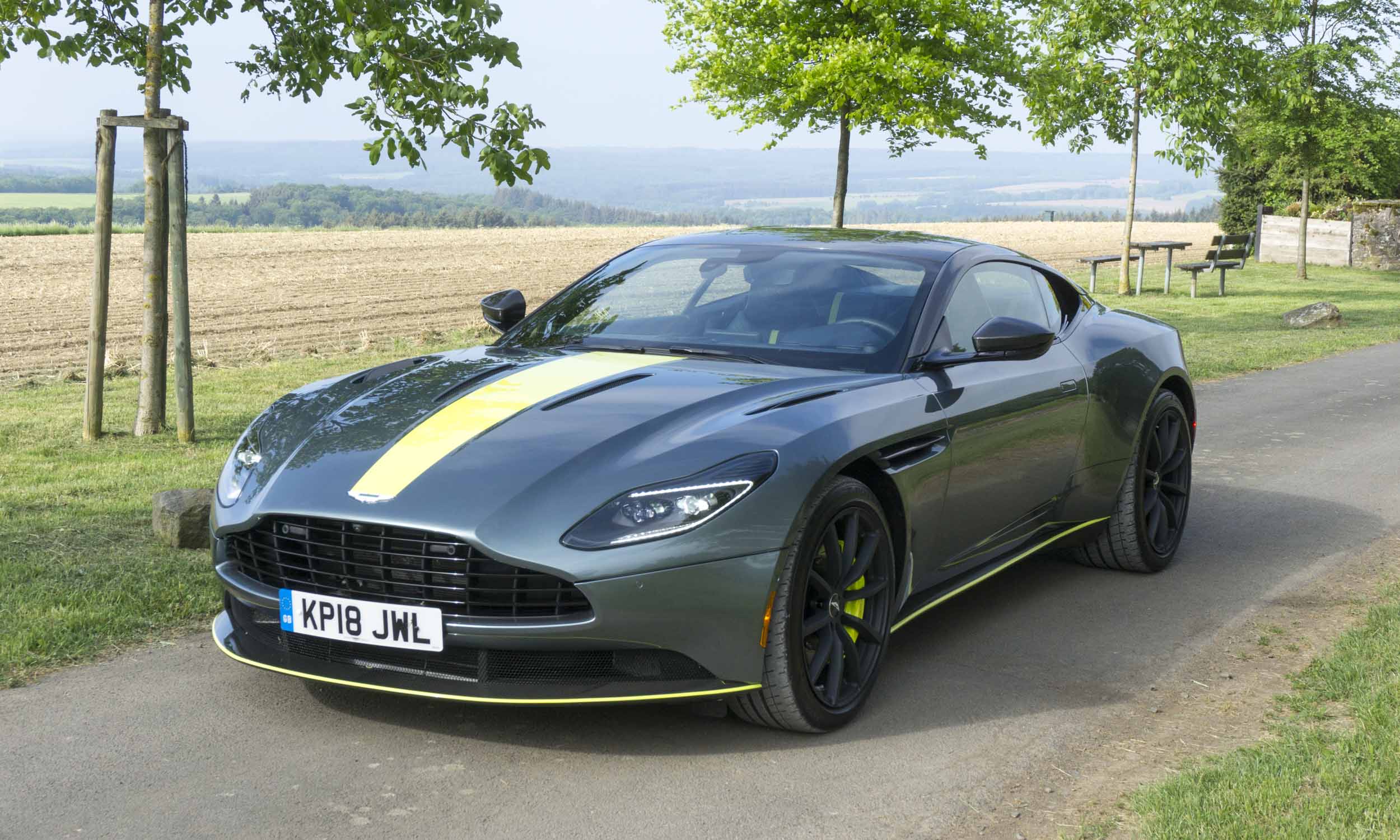 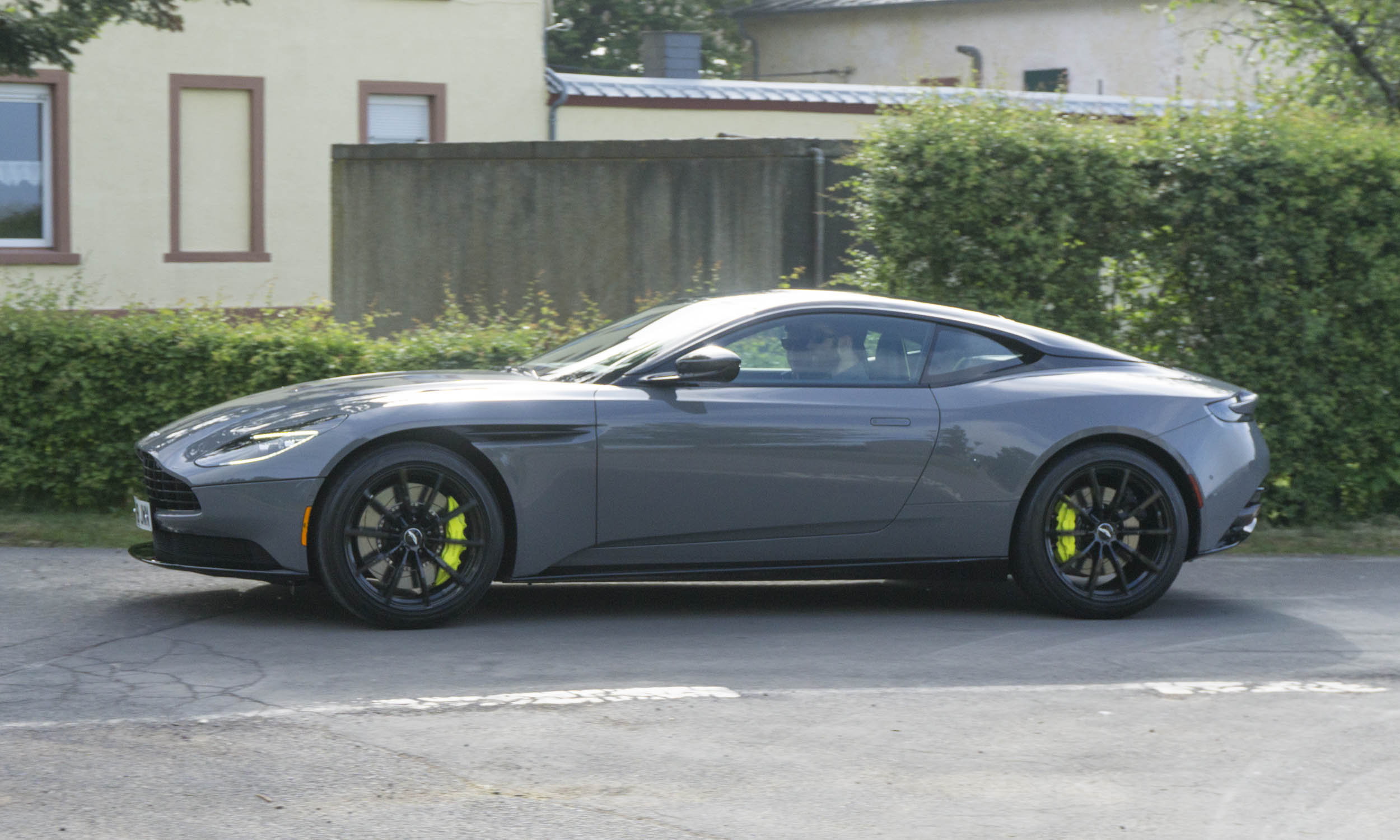 On the Road
We had the opportunity to spend a few hours behind the wheel of the new DB11 AMR on the roads around Nurburg, Germany. One of the wonderful things about driving in Germany is that many roads don’t have speed limits, which means we were able to experience this V12 sports car the way it was intended to be experienced. 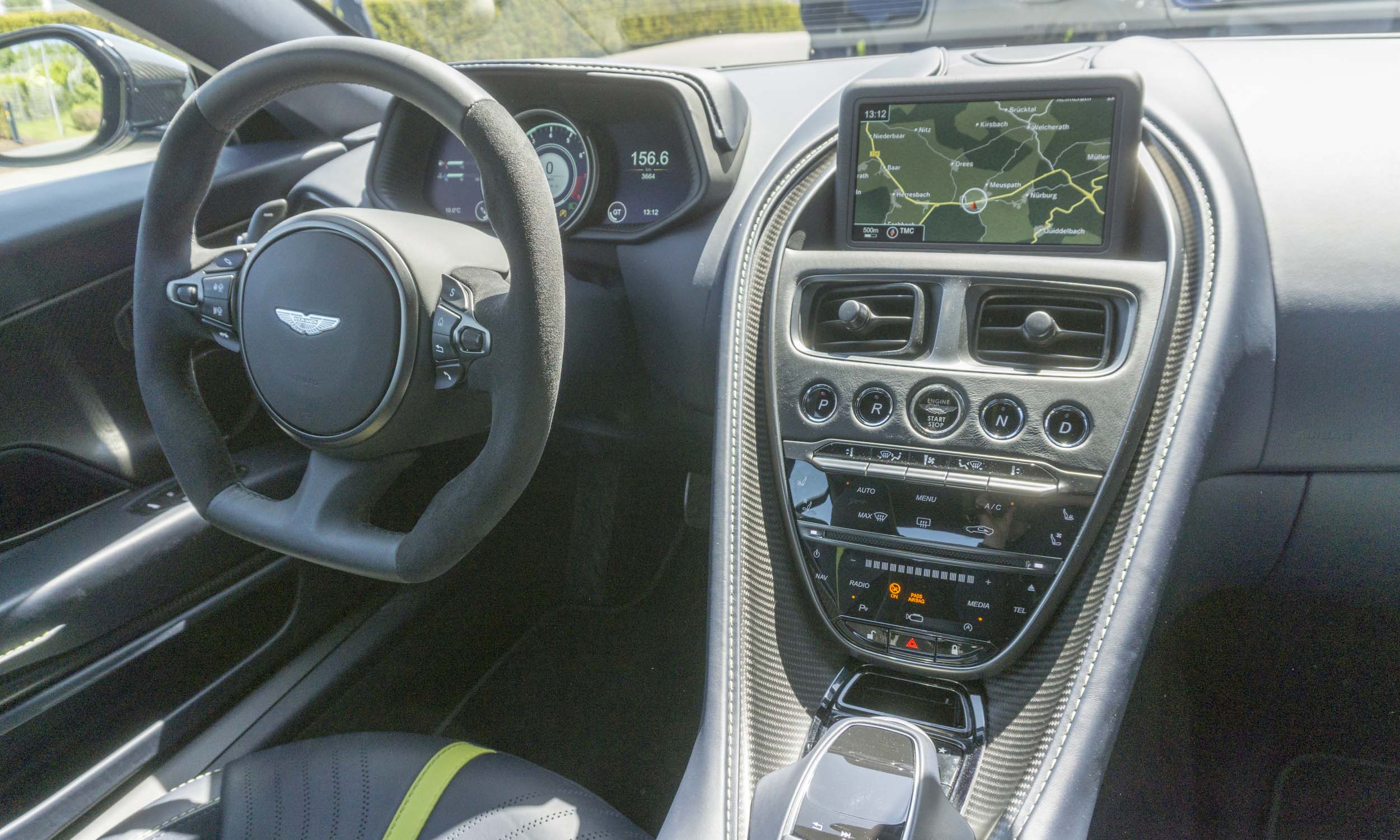 Multiple Personalities
One of our favorite attributes of the new DB11 AMR is its ability to change personalities. When setting the drive mode to GT and suspension to standard, the Aston becomes a comfortable cruiser. Shifts are so smooth they’re barely noticeable, the exhaust is somewhat muted and the ride is more relaxed. In GT mode it would be easy to cruise the Autobahn at 100 mph all day and stay perfectly comfortable, enjoying the sounds from the available Bang & Olufsen audio system. 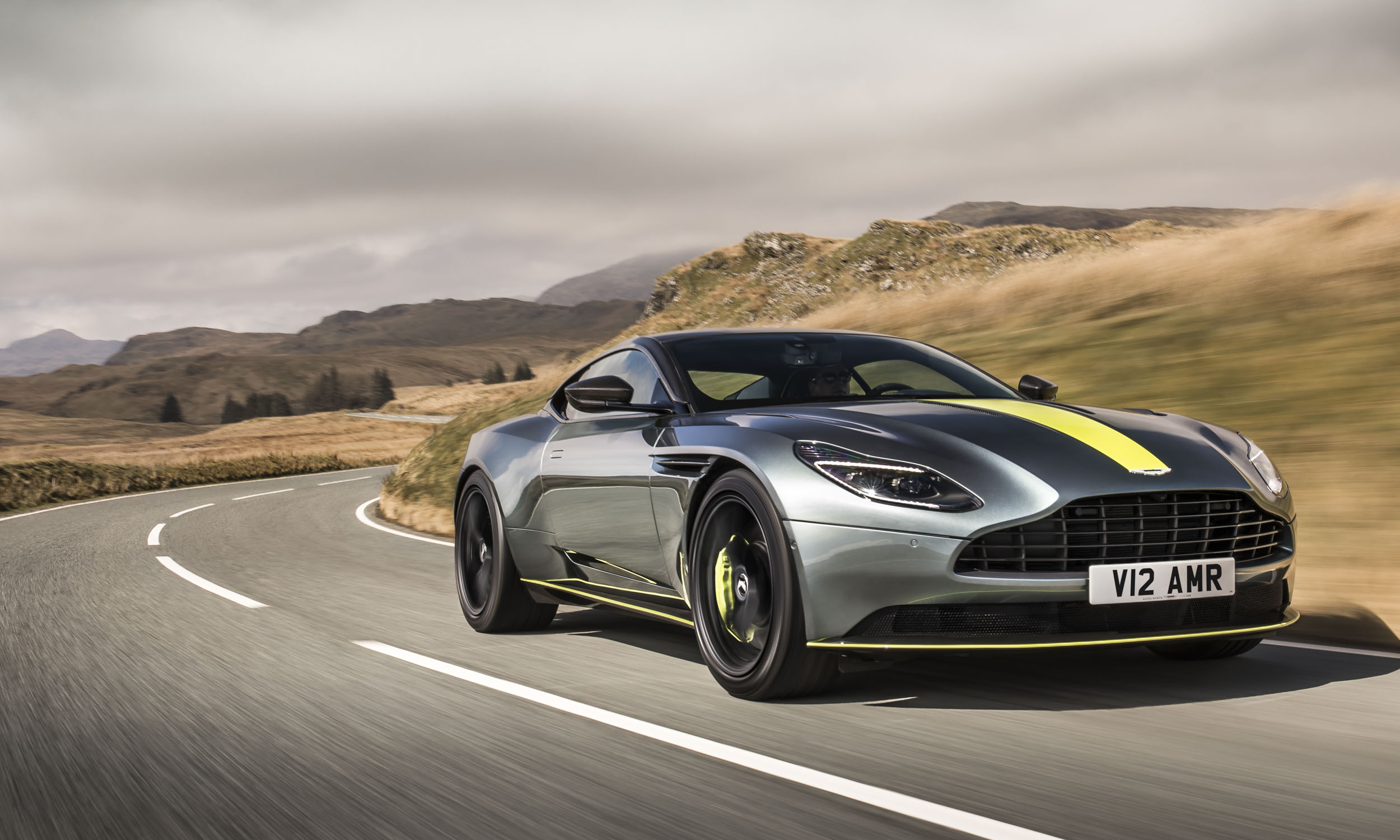 Sport Plus
For those desiring a more spirited driving experience, Sport Plus can be selected from the S button on the steering wheel, while the suspension button on the left side of the wheel can do the same. Suddenly throttle response is more immediate, steering becomes crisper and, most noticeably, the exhaust becomes considerably more pronounced. Full throttle brings a roar from the big rear pipes while shifts bang off quickly and violently. Slowing for a corner results in a quick downshift, often before you could pull the paddle to shift manually. The DB11 becomes more agile in the corners and almost feels as if it has somehow shed a few pounds with a push of that button. 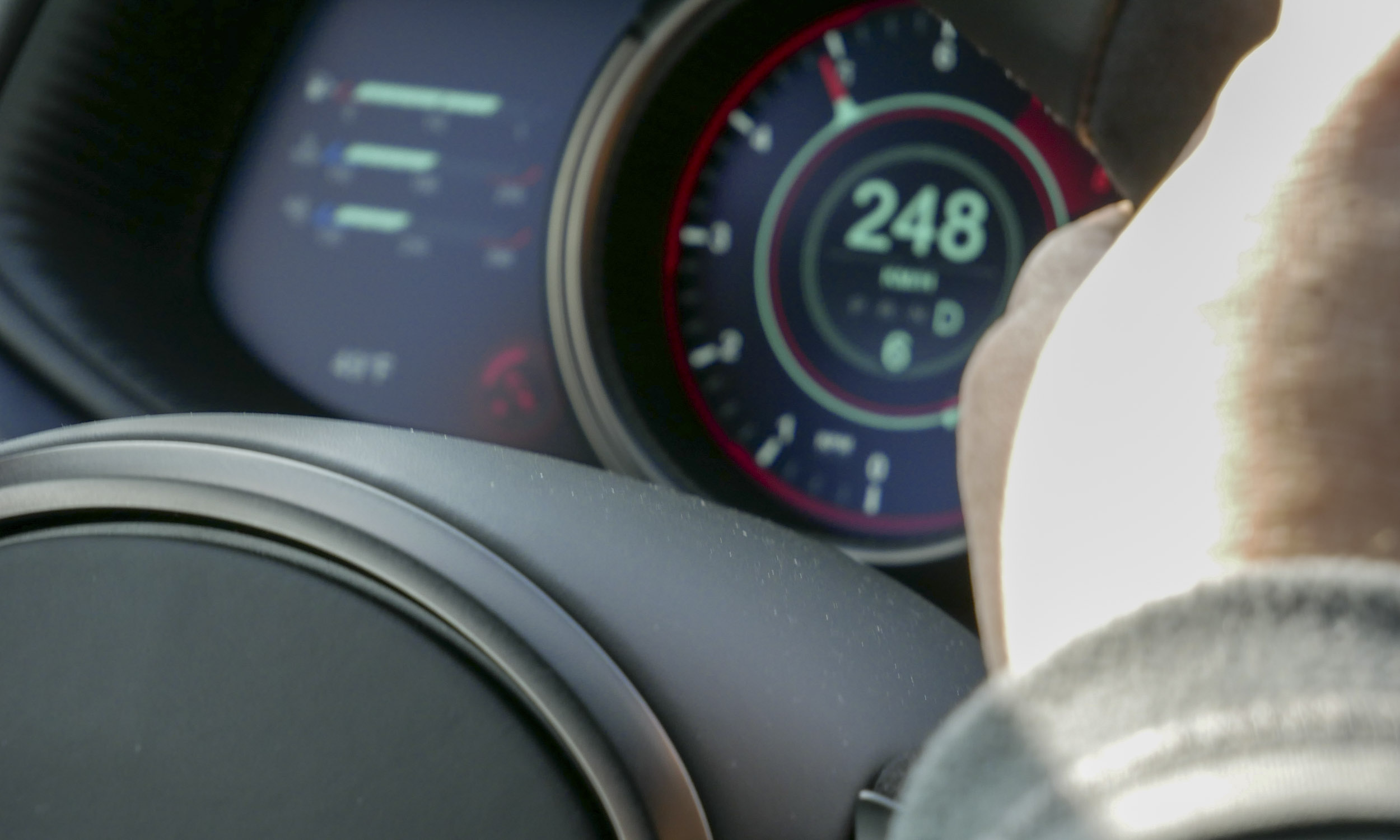 Autobahn Cruising
With 630 horsepower on tap, there never seems to be an occasion where power is lacking. Acceleration is always strong, no matter what speed is already registering. On an unlimited-speed section of the Autobahn we easily exceeded 150 mph — the sleek DB11 feels perfectly stable at this extreme speed. 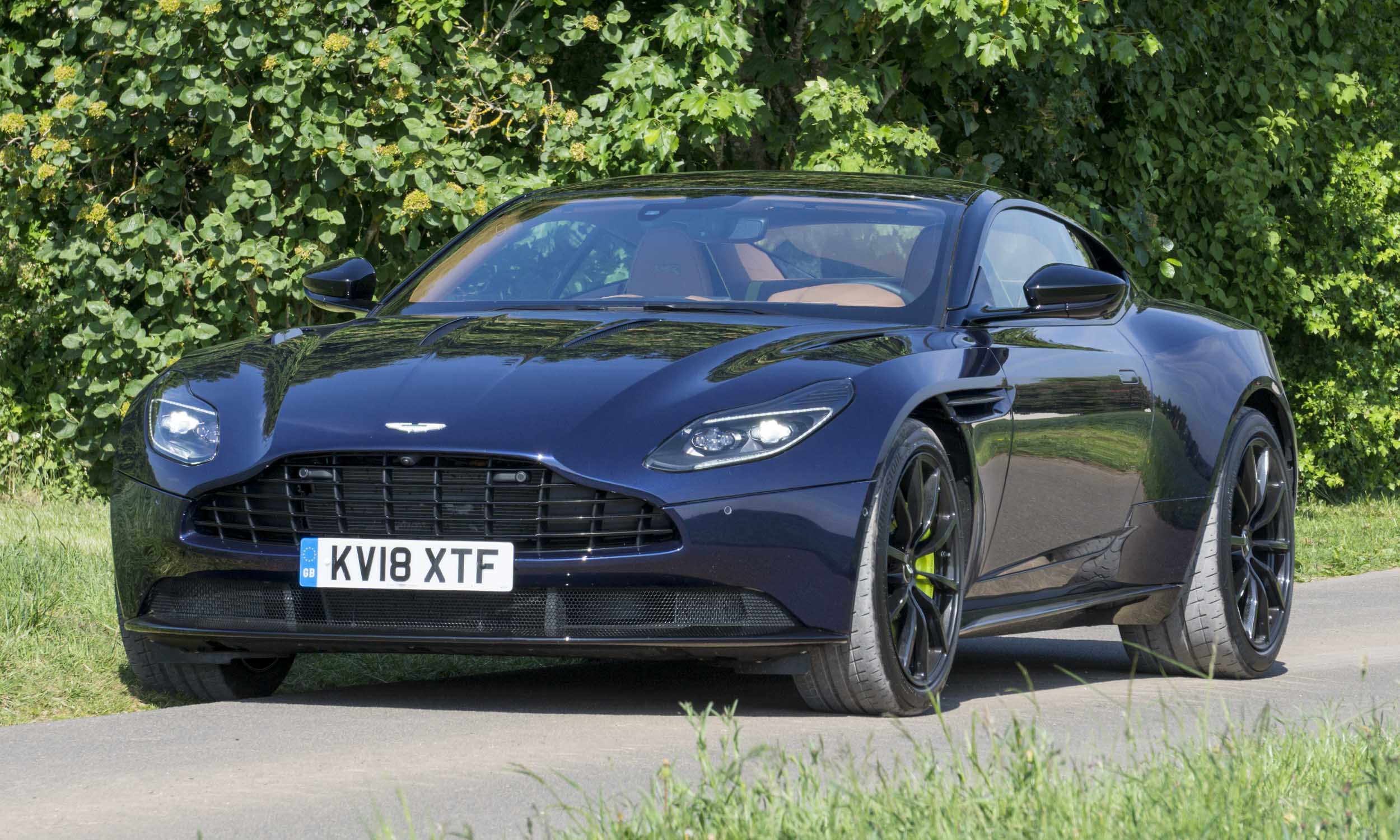 Quick and Agile
Just as the DB11 feels at home on the high-speed Autobahn, it was just as stable on winding roads throughout the German countryside. Direction changes happen quickly with very little body roll, and even bumpy roads don’t upset this British sports car. With large ventilated brakes at all four corners, stopping from high speeds in the DB11 AMR is never an issue. 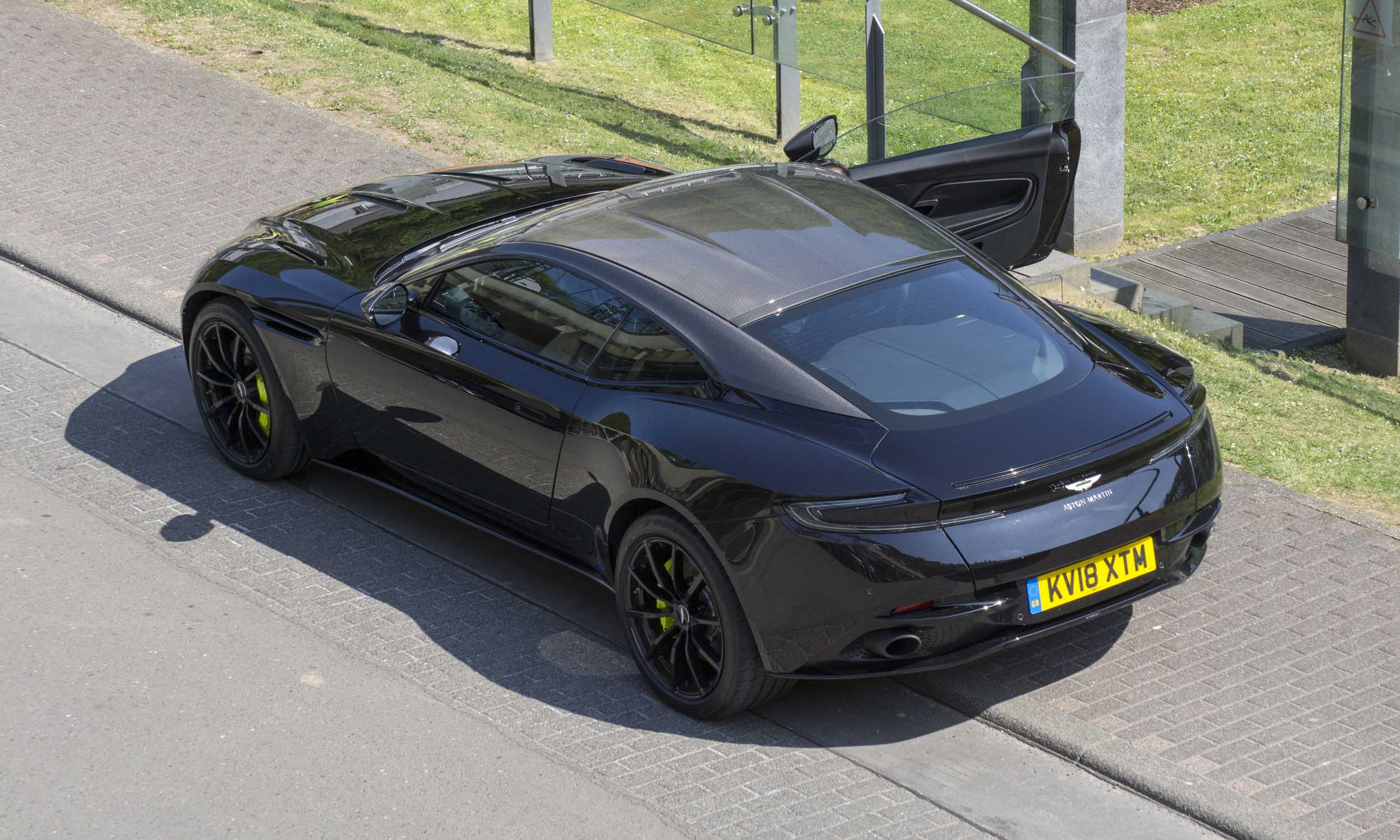 Right for You?
With a price starting $241,000, the DB11 AMR will not be for everyone. However, for someone who is looking for extreme performance in a sexy sport coupe without having to sacrifice ride or comfort, the V12-powered Aston Martin DB11 AMR might be the perfect vehicle. Considering all the performance and handling improvements Aston Martin has executed to perfect the DB11 AMR, it easily becomes one of the best GT contenders on the road today. 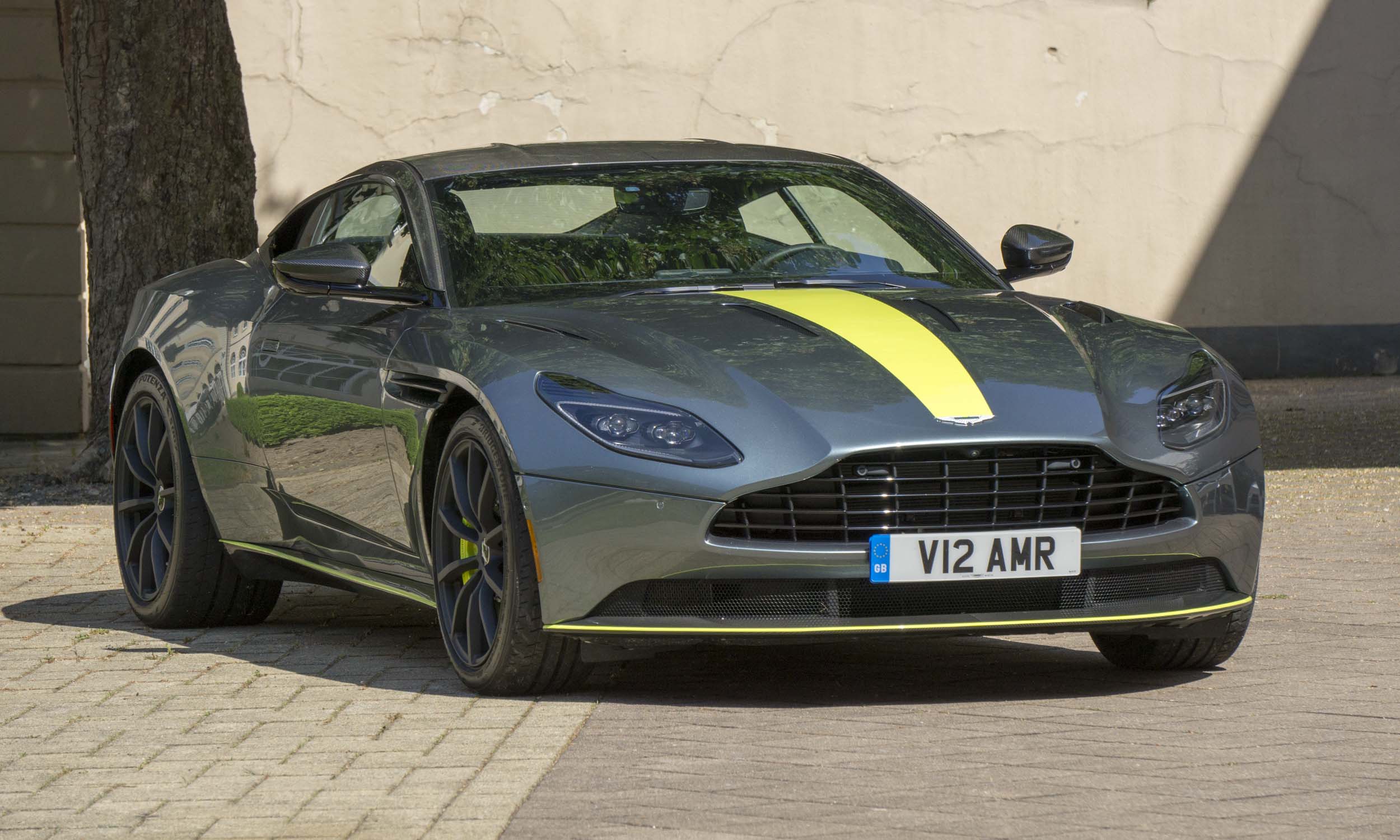