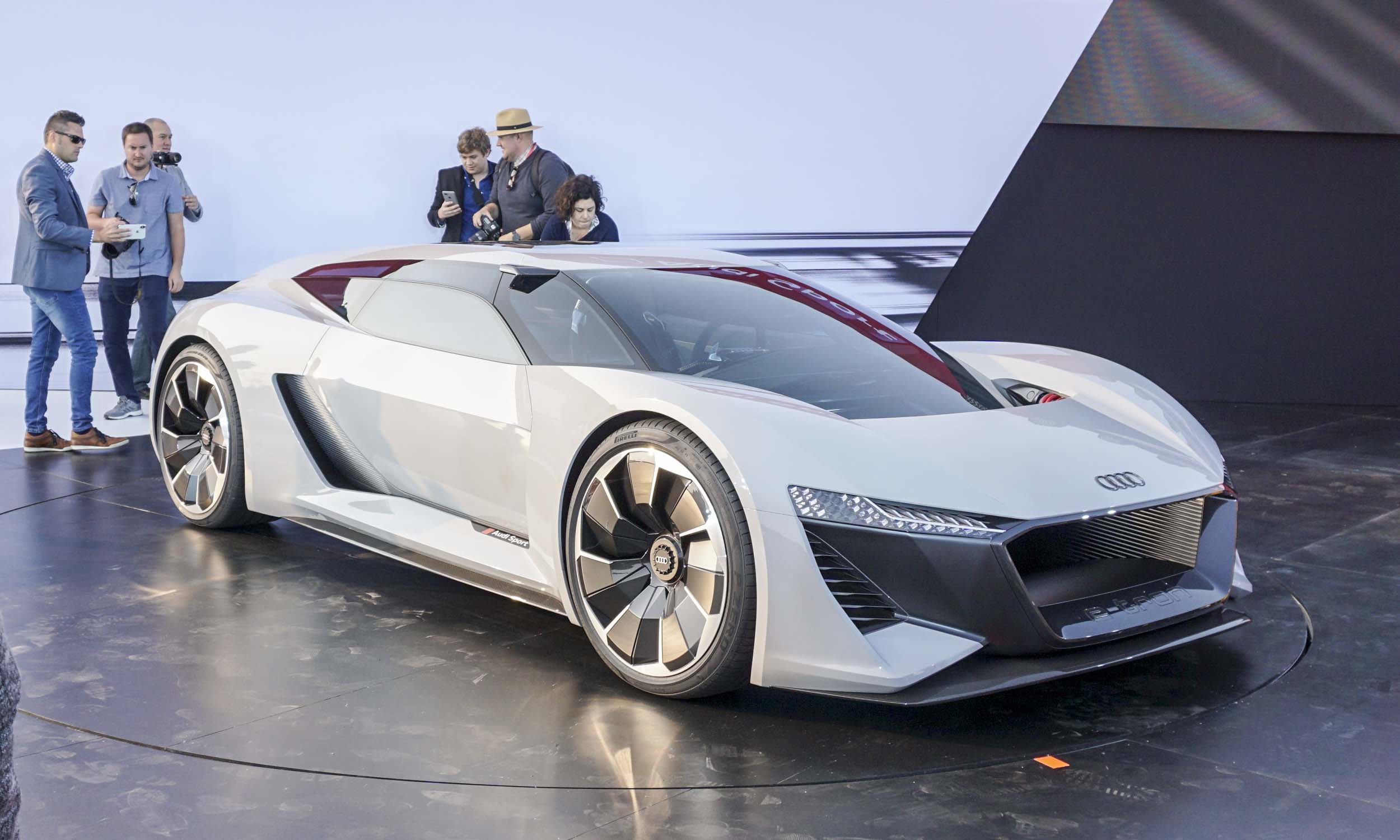 Audi PB 18 e-tron
A high-performance concept car that focuses on the driver, the Audi PB 18 e-tron exists in direct contrast to Audi’s current research and development around technology for autonomous cars. The PB 18 e-tron shares an electric drive system with the Audi Aicon from 2017, which was a fully automated long-distance luxury vehicle. In opposition to the Aicon, the PB 18 e-tron is all about performance and the driving experience, with the name derived from the mystique of the Pebble Beach debut location and from the Audi R18 e-tron LMP1 race car. 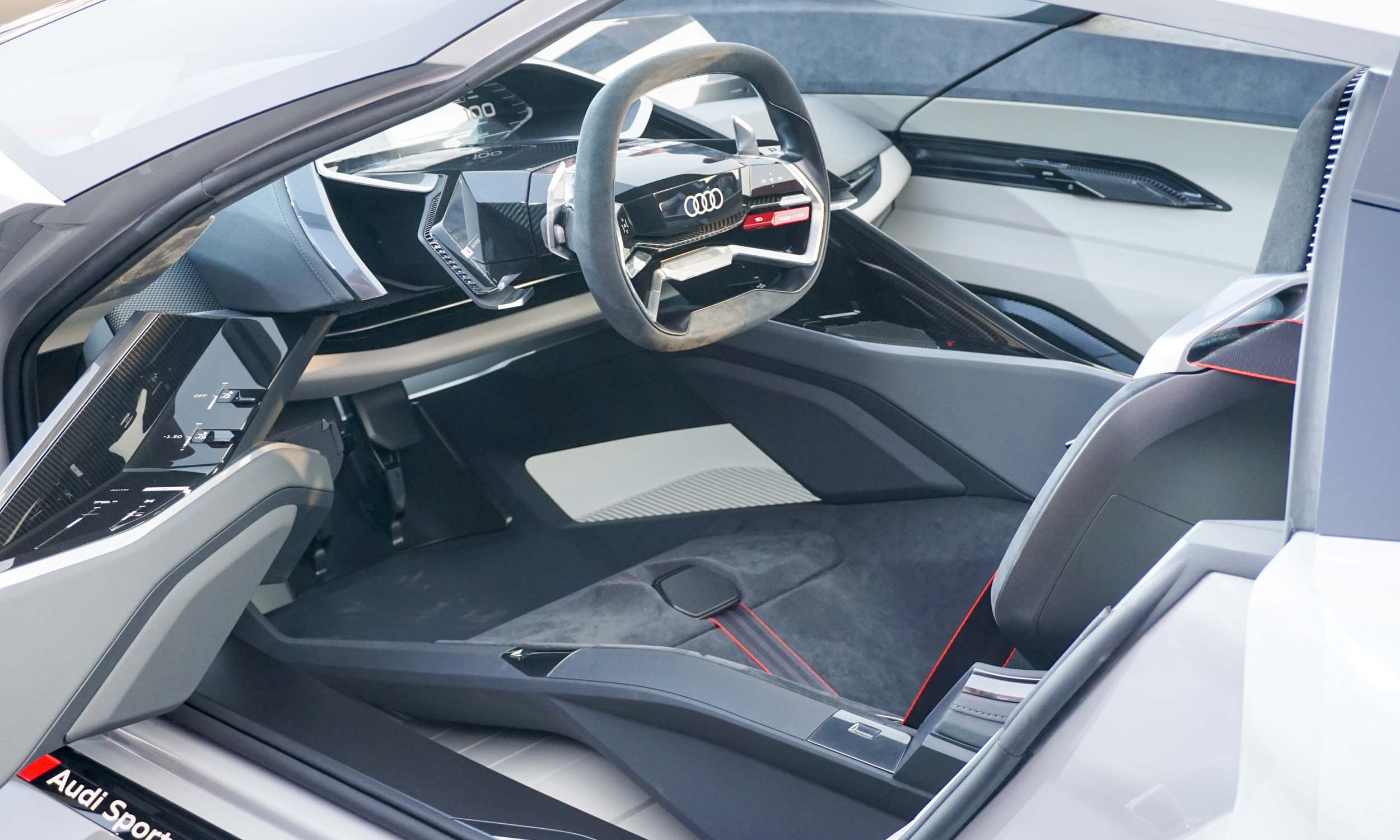 Central Driving Position
One of the most unique aspects of the Audi PB 18 e-tron is the central or “monoposto” driving position — the Italian word for single-seat race cars in the 1930s. For performance driving, the pilot sits in the center of the car for better weight distribution and visibility. But in the PB18 e-tron, the driver’s seat and all necessary driving controls can be moved to the left to create room for a passenger and access to a second seat located close to the ground. 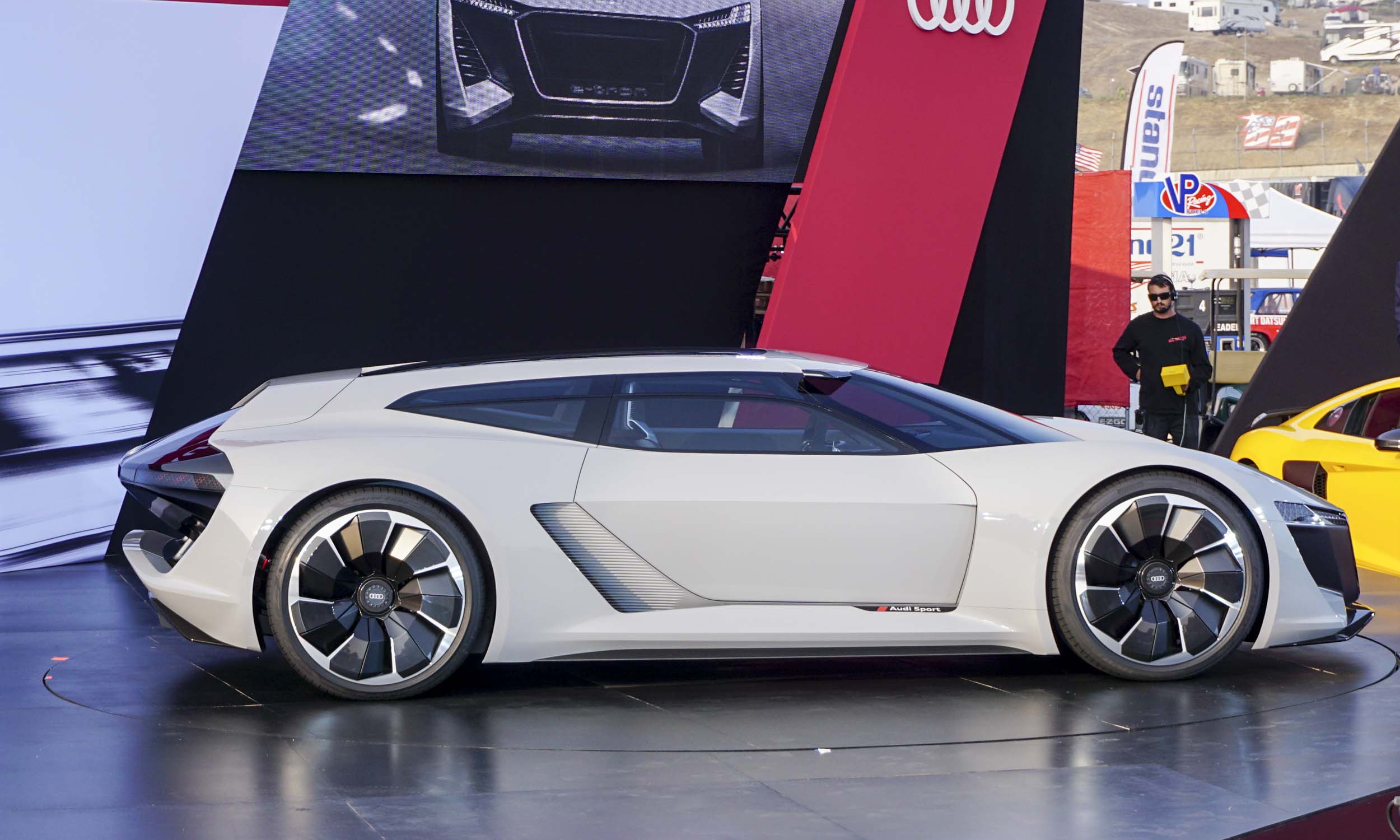 Electric Sports Car
The PB 18 e-tron is powered by three electric motors with quattro all-wheel drive. One electric motor is located in the front to drive the front wheels, and the other two are located at the rear with one motor powering each wheel. Up to 150 kW of power is delivered to the front wheels and 450 kW to the rear, with a total system output of 500 kW and 612 lb-ft of total combined torque. According to Audi data, the PB 18 e-tron will accelerate from zero to 60 mph in a bit over 2 seconds. 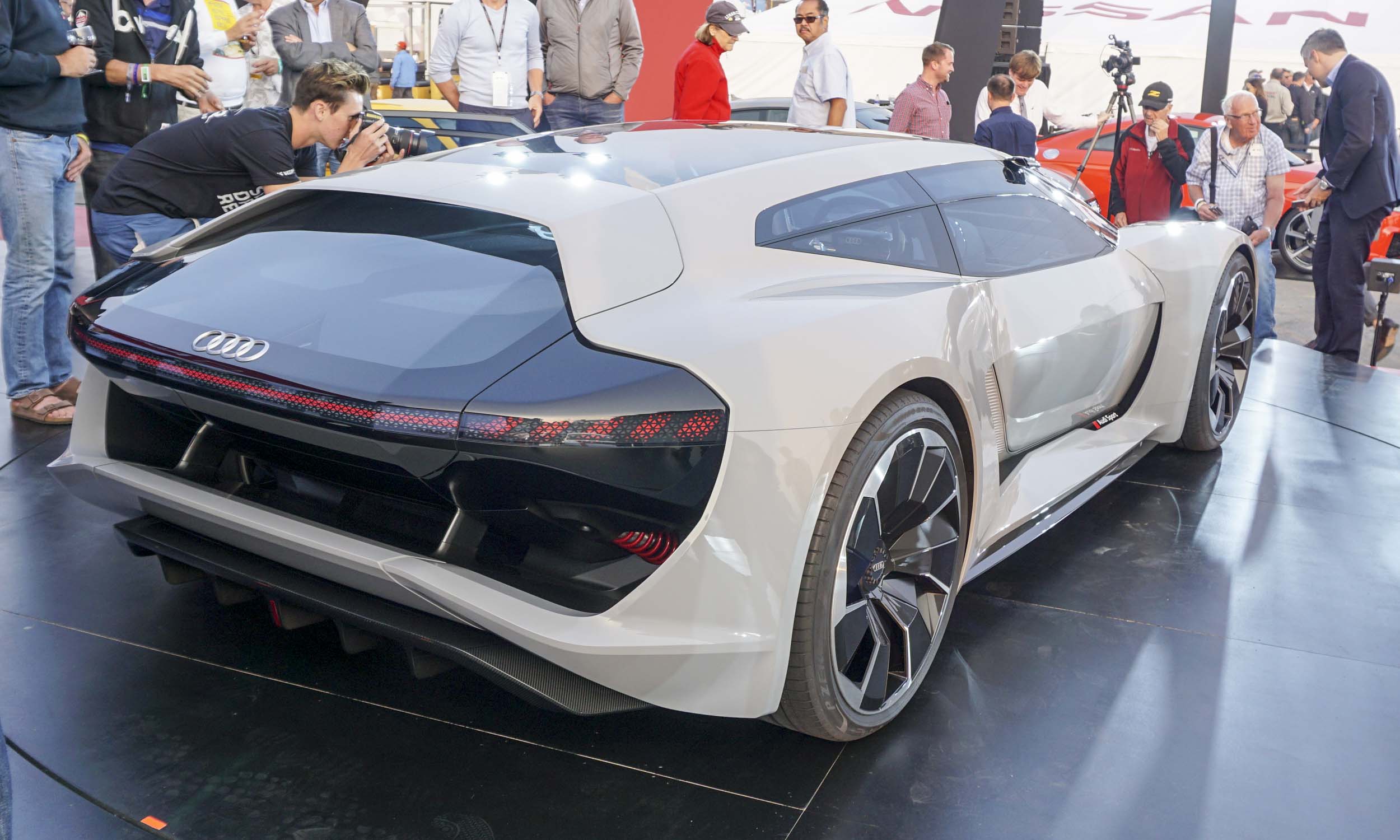 Efficient Braking
As mentioned earlier, the PB 18 e-tron’s main focus is on performance, but also on efficiency. The car recovers energy from braking, with all braking up to moderate levels performed by the electric motors. Hydraulic brakes are instantly activated during critical situations to assist with heavy braking duties. 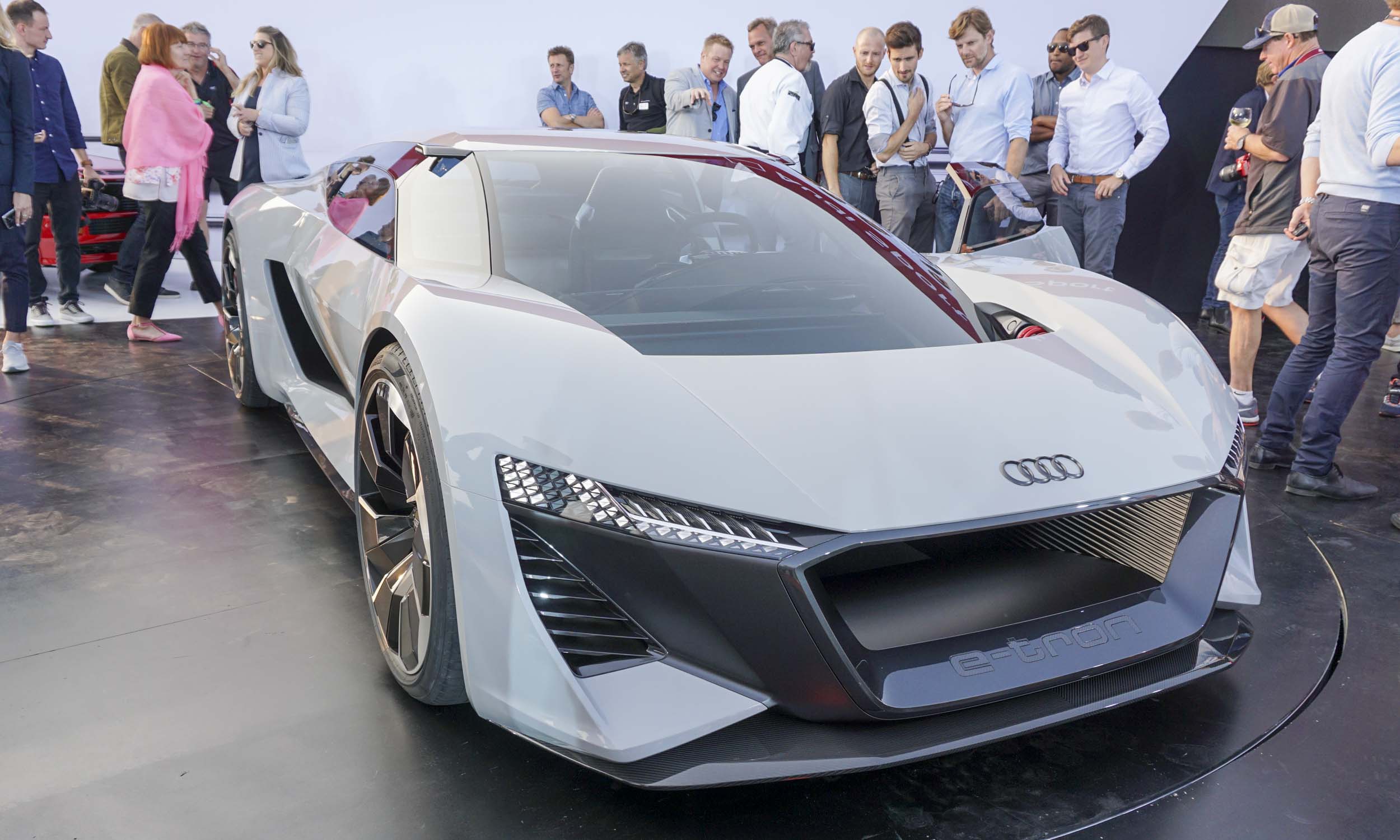 Audi Design Loft
The Audi PB 18 e-tron concept and design come from the new Audi Design Loft in Malibu, California, headed by Gael Buzyn. “We want to offer the driver an experience that is otherwise available only in a racing car like the Audi R18,” explained Buzyn. “That’s why we developed the interior around the ideal driver’s position in the center. Nevertheless, our aim was to also give the PB 18 e-tron a high degree of everyday usability — not just for the driver, but also for a potential passenger,” Buzyn noted. 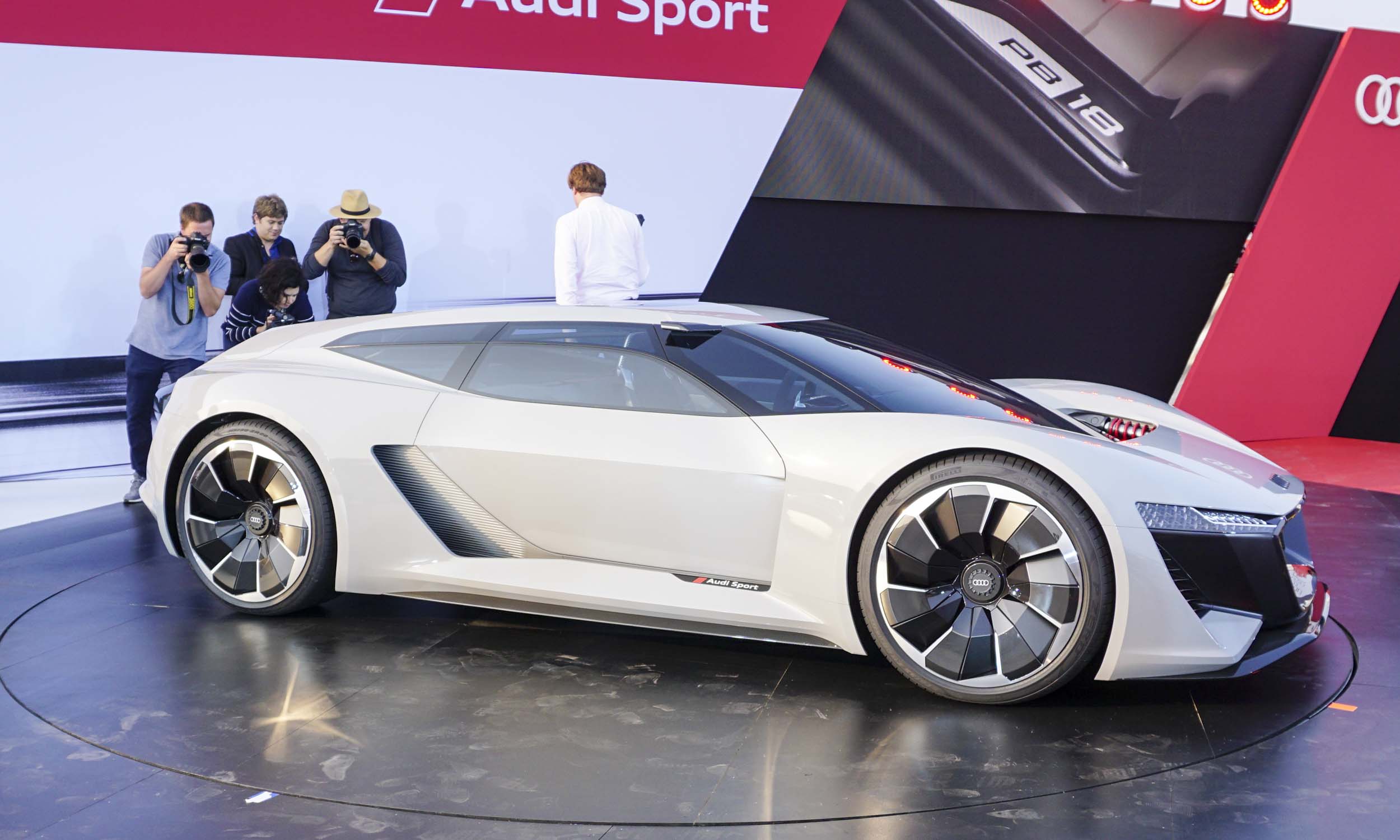 Sports Car Design
Similar to a mid-engine sports car, the Audi PB 18 e-tron features a cab-forward design and a low center of gravity located below the seats and in front of the rear axle. This is not due to the engine and transmission of a traditional sports car, but the location of the liquid-cooled solid-state battery pack. The lightweight body is created from a mix of aluminum, carbon and multi-material composites.