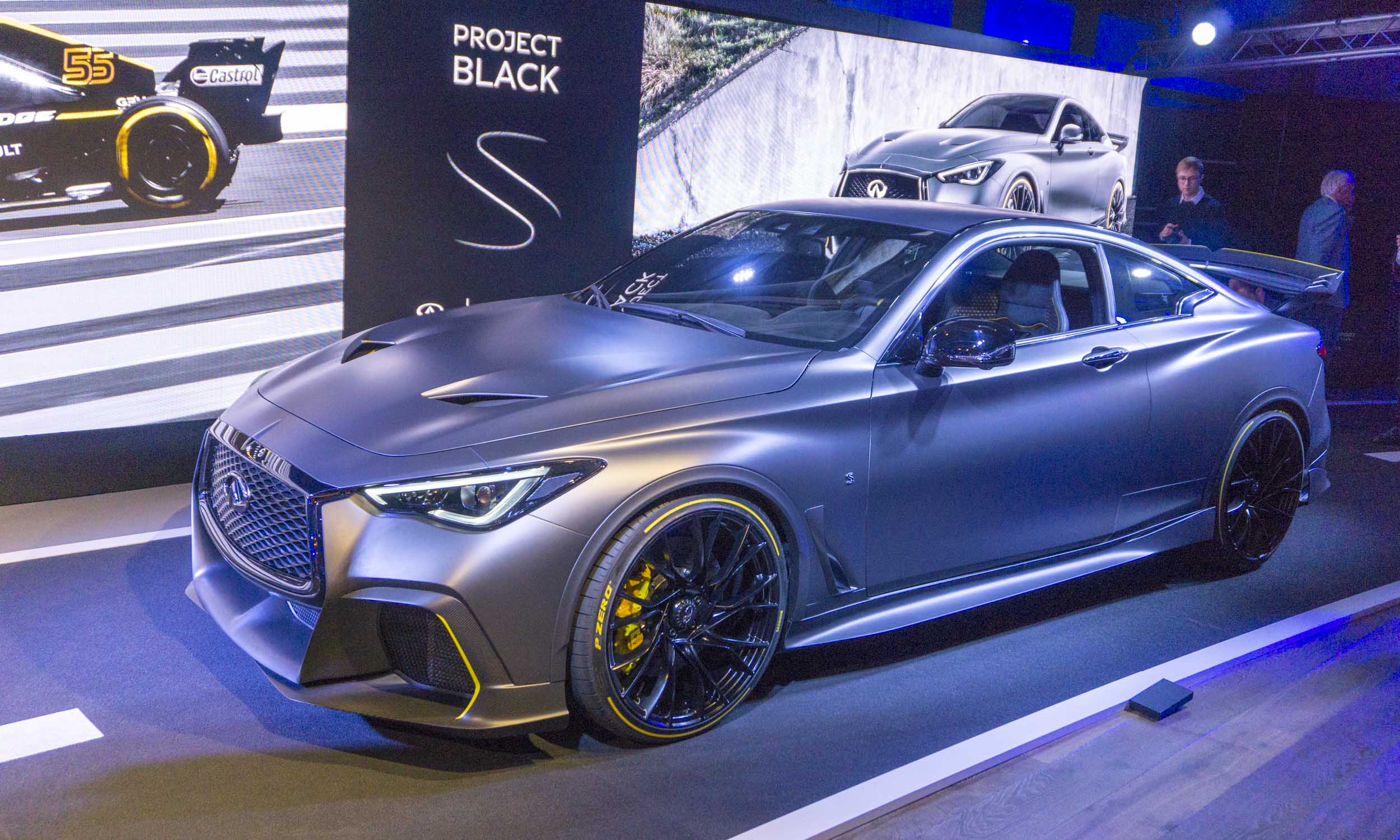 Latest Electrified Concept
Over the last few years, Infiniti has been showing a number of electrified concept vehicles as key components of its commitment to having its entire model lineup fully electrified by 2021, and the latest in this line of concepts debuted here in Paris at the 2018 Mondial de l’Auto, or Paris Motor Show. The Infiniti Project Black S prototype is based on the Q60 Red Sport 400 and employs a Formula One-inspired dual-hybrid powertrain to showcase how a high-performance hybrid system might work in a road car. 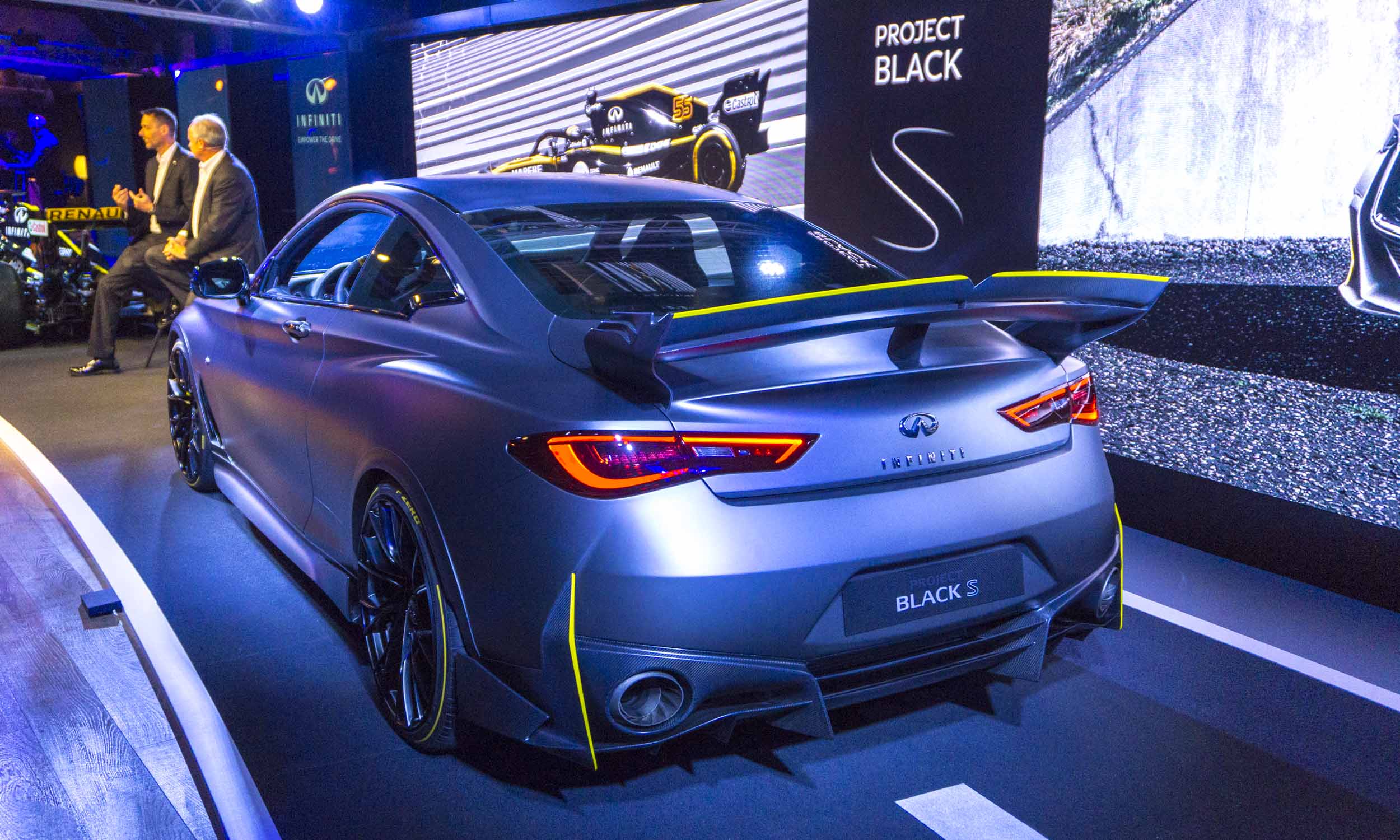 Formula One Technology
The technology needed for such a vehicle draws on the technology and experience of the Renault-Nissan-Mitsubishi alliance. “The Project Black S represents the very top end of electrification in the Alliance portfolio and is another example of Infiniti’s entrepreneurial spirit on its journey to electrification from 2021 onward,” said Roland Krueger, chairman and global president at Infiniti. 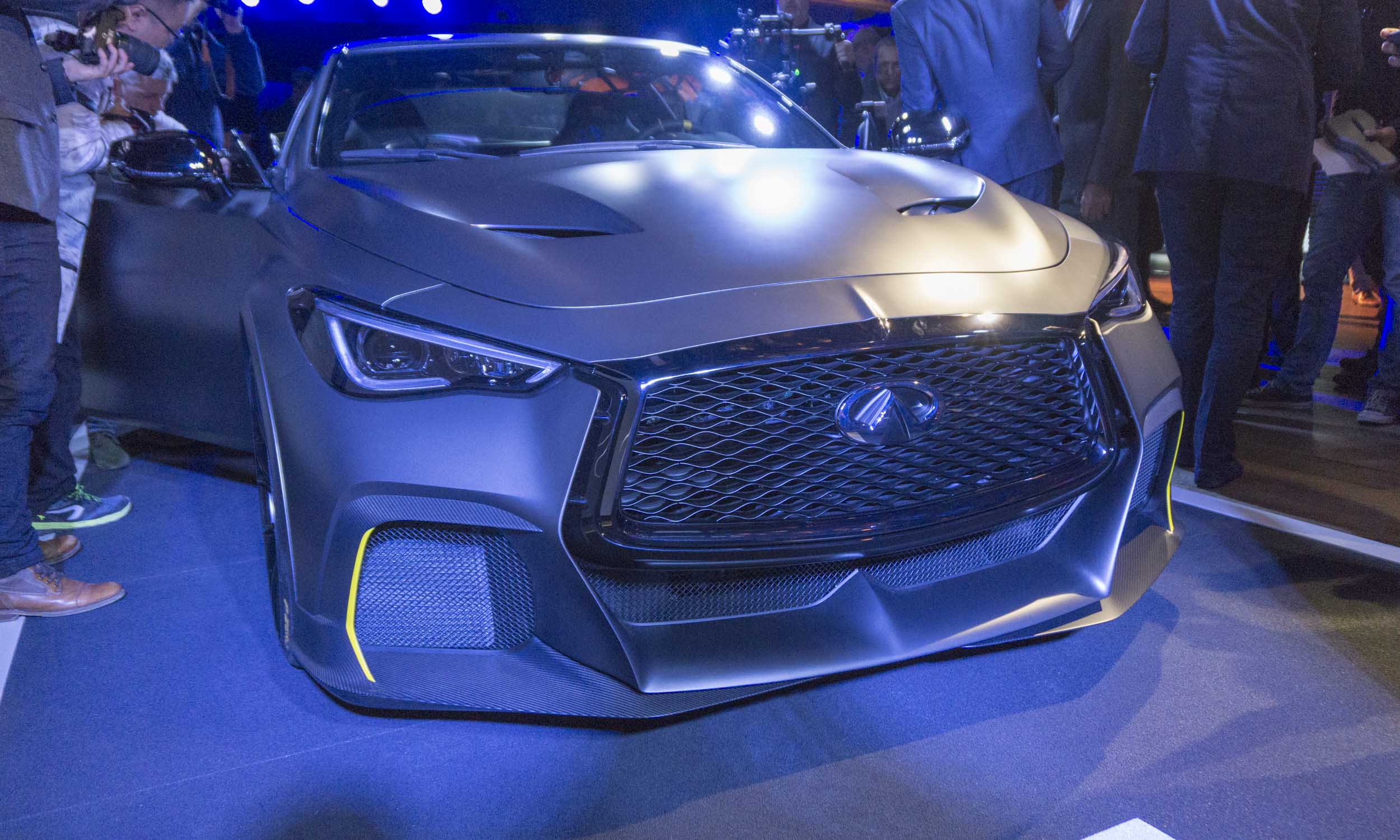 New Level of Performance
The Q60 Red Sport 400 is already an impressive vehicle, boasting a 400-horsepower V6 powertrain and excellent driving dynamics. The Project Black S takes this successful vehicle to another level. “Project Black S utilizes high power and smart energy management from advanced powertrains, a thrilling dynamic capability on road and track, and a performance-oriented aesthetic,” said Krueger. “A collaborative venture between Infiniti and the Renault Sport Formula One Team, the Project Black S prototype is a testbed for new ideas and technologies, demonstrating how our Alliance partnerships could make our ambitious visions a reality,” Krueger noted.

F1 Inspired
Infiniti is a technical partner with the Renault Sport Formula One team, and together they developed the dual-hybrid technology in the Renault Formula One race cars. This Project Black S prototype now takes that technology and puts it to use in a road car prototype. 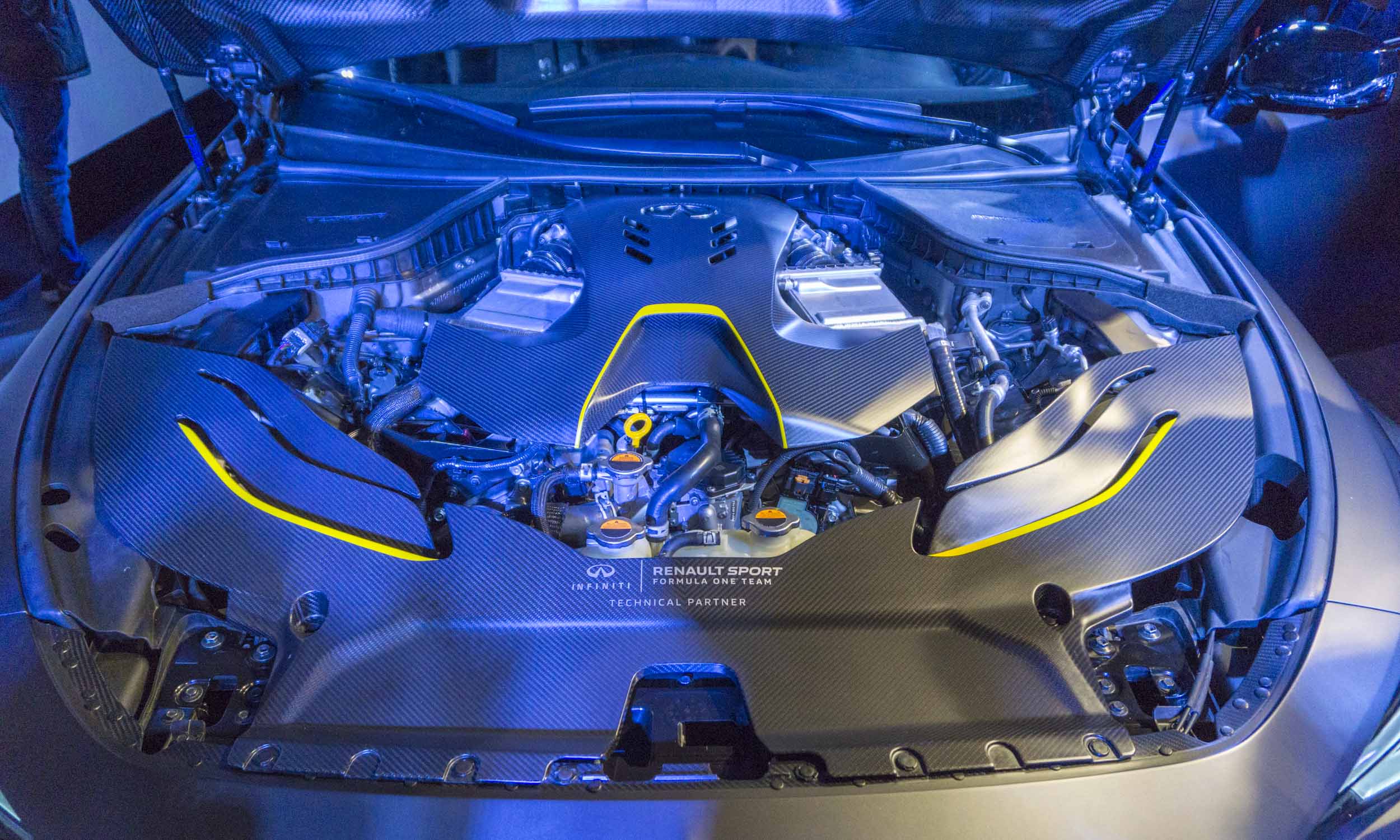 High-Tech Powertrain
The powertrain in the Infiniti Project Black S prototype uses three motor-generator units. One of these reclaims energy from braking, while the other two are connected with the engine’s twin electric turbochargers to harvest heat energy from exhaust gasses. In this way electrical power is generated under braking as well as acceleration. 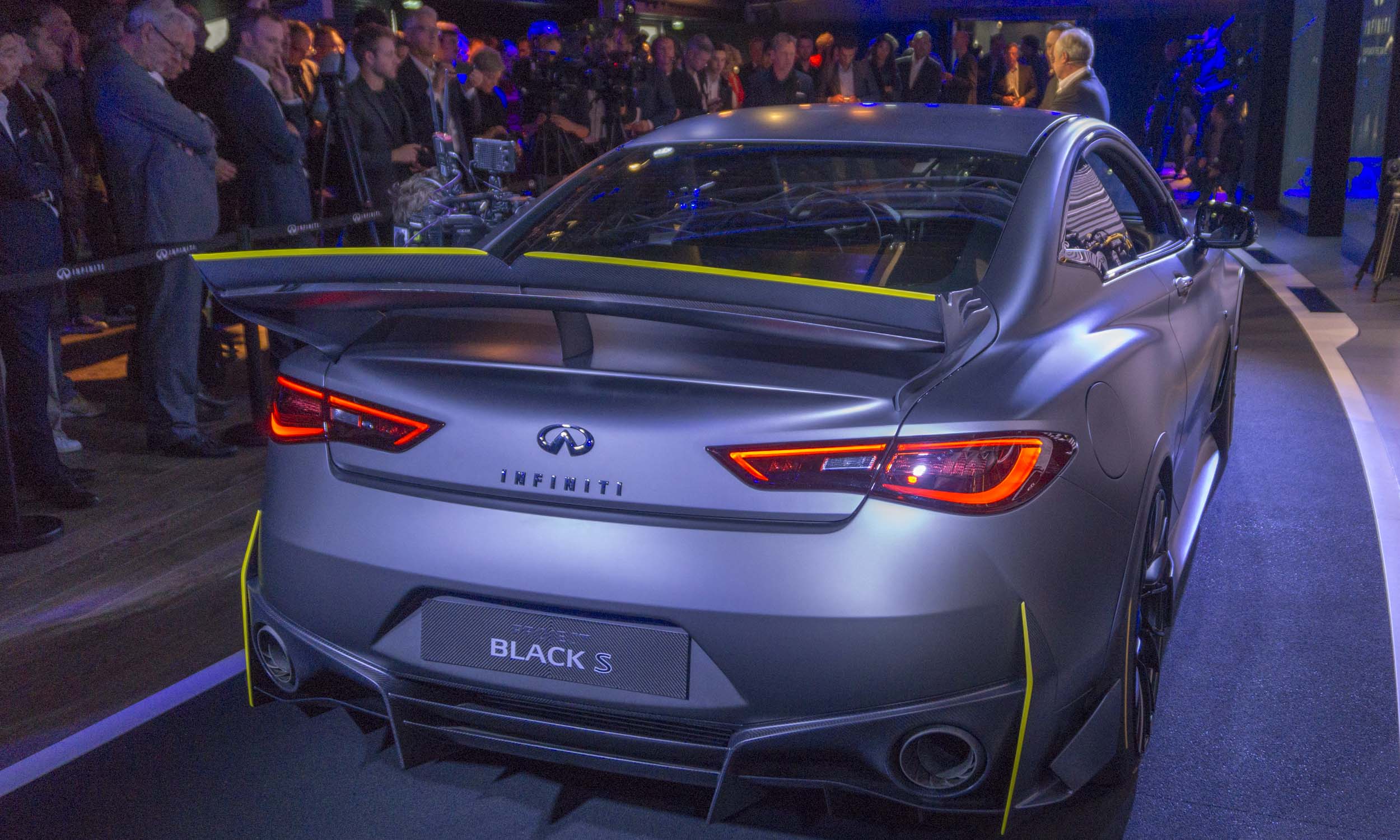 Reclaimed Power
As with the Formula One powertrain, the energy recovered by the Project Black S is stored in a high-rate discharge lithium-ion battery pack. The power is then deployed first as an electrically-assisted anti-lag system, turning the turbine blades within both e-turbos more rapidly, increasing the amount of air recirculated back into the engine to boost power. Secondly, energy stored in the battery can be used to feed up to 120 kW of additional electric power directly to the rear wheels. This dual-hybrid technology enables a significant increase in performance for instantaneous, lag-free acceleration. 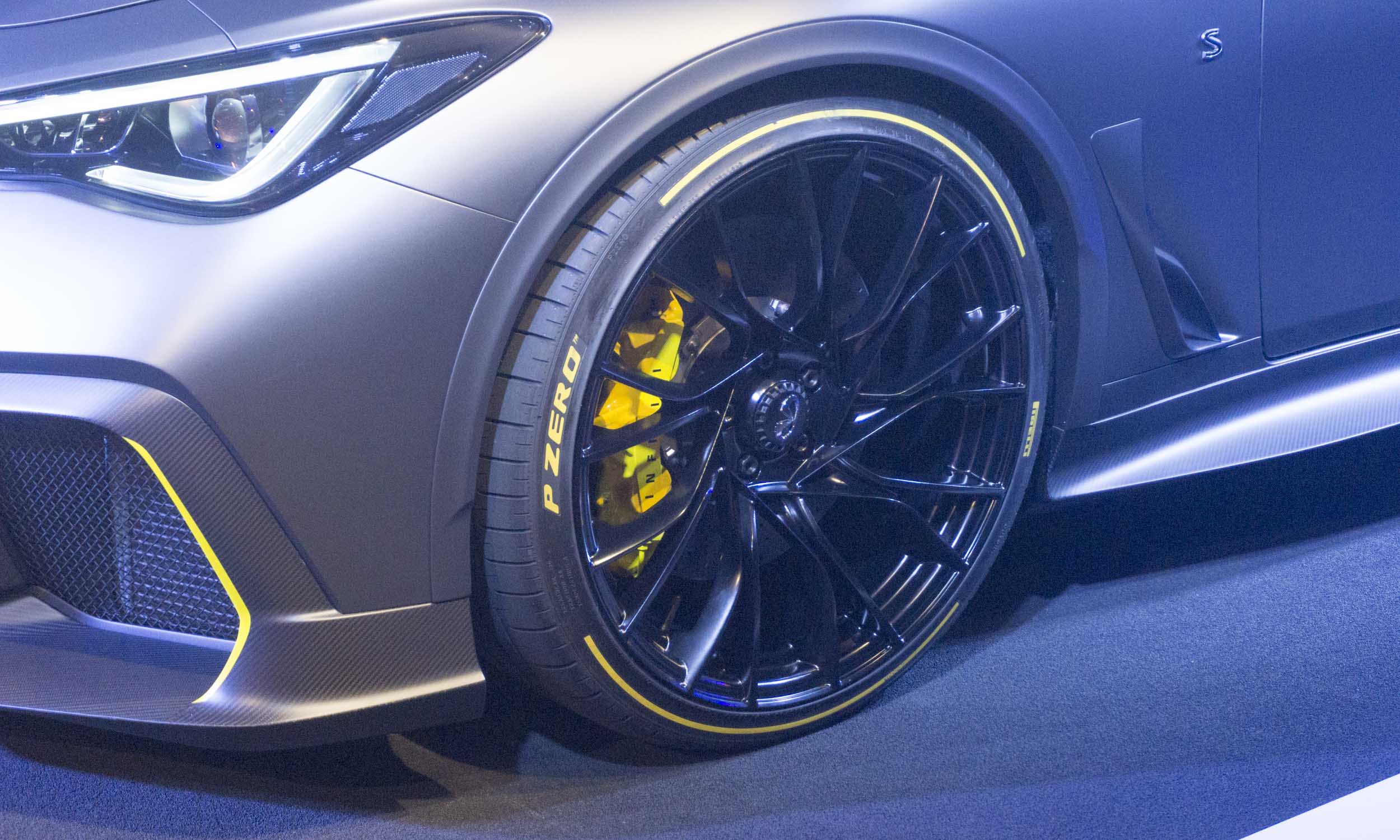 Test Bed
“The Project Black S prototype is a test-bed for innovative thinking, demonstrating our desire to introduce exhilarating electrified powertrains with smarter energy management than other hybrids. While still a prototype, this dual-hybrid system is a world first, harvesting both heat and kinetic energy, under braking and acceleration. By intelligently scavenging and recycling energy, the hybrid performance from the Project Black S powertrain would be smart, sustained and utterly satisfying to deploy,” said Francois Bancon, vice president of product and programs at Infiniti. 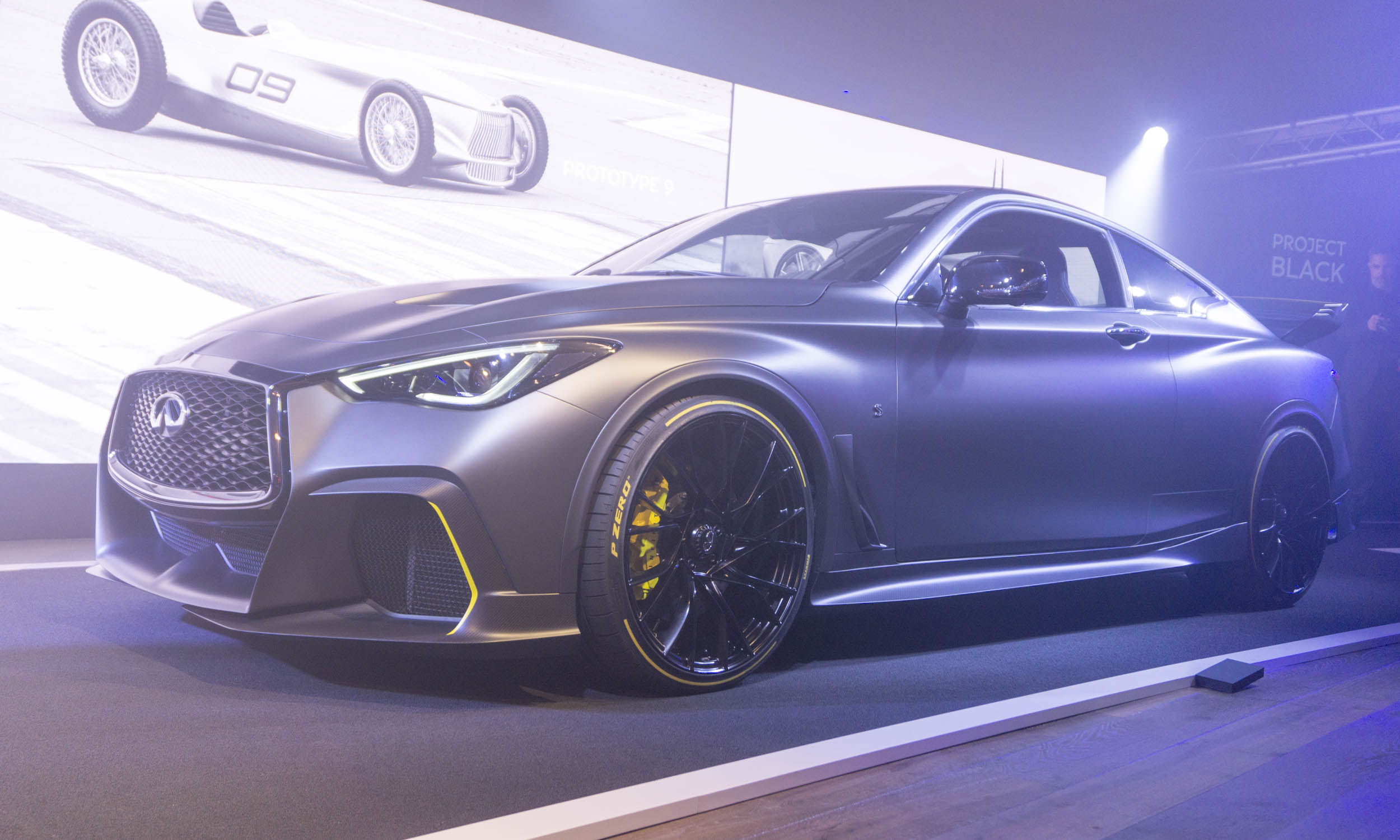 More Power
The unique dual-hybrid system in the Black S prototype recovers enough additional energy to bring the overall output of the powertrain to 563 horsepower — a significant jump compared to the 400 horsepower produced by the standard twin-turbo V6. Based on the power-to-weight ratio, Infiniti expects this sporty coupe to reach 62 mph in less than 4 seconds. 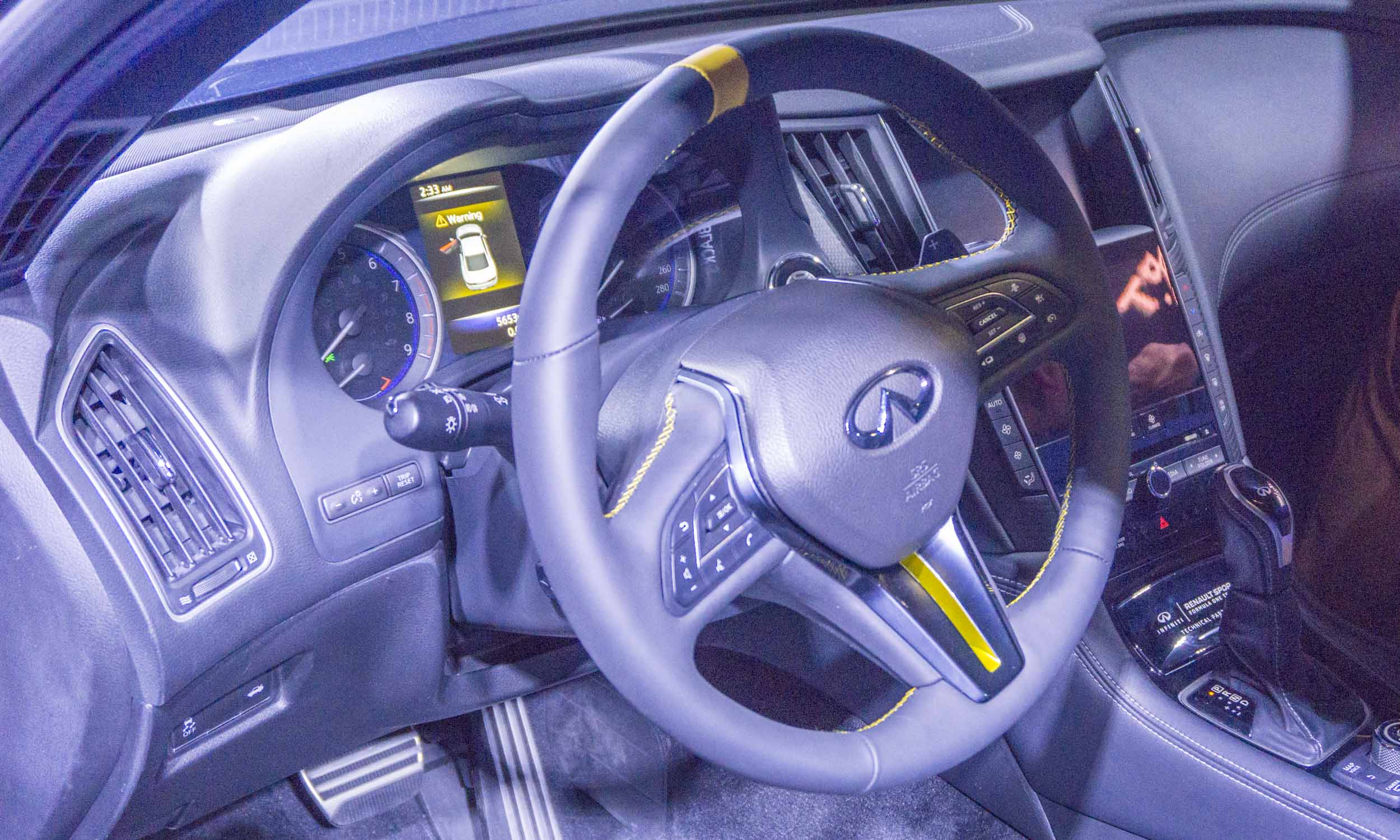 Drive by Wire
The Black S Prototype is also the first Infiniti to be fitted with drive-by-wire controls, including acceleration, braking, steering and gear shifts. The brake-by-wire system has been optimized for road or track use and features large carbon-ceramic ventilated disc brakes. 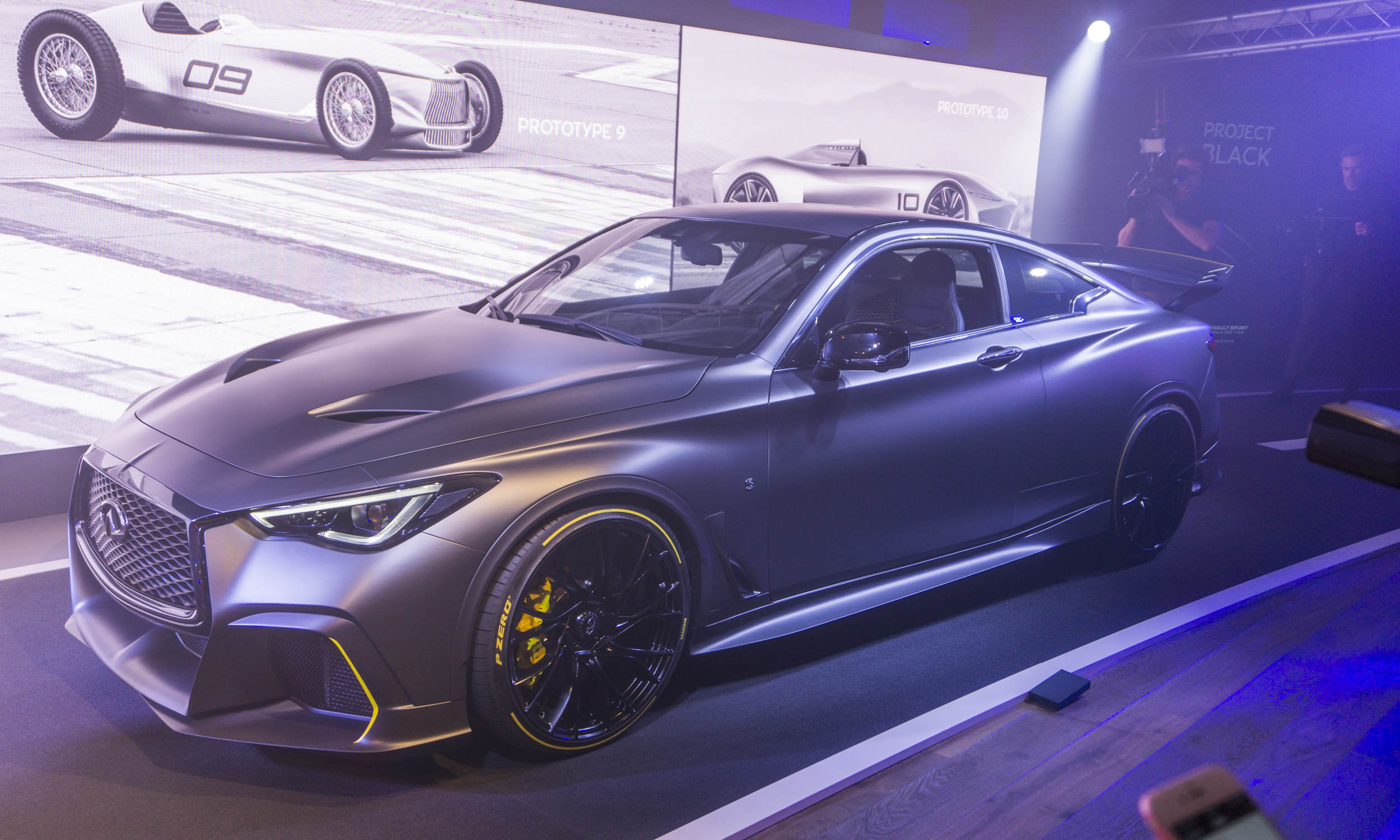 Sporty Styling
In addition to the advanced powertrain, the Project Black S stands out from other sport coupes with styling that reflects its high levels of performance. Many of the Q60’s body panels have been replaced with carbon fiber for a lighter and stiffer body, while aerodynamics were optimized by the Renault Formula One team. The Black finish with yellow highlights is also inspired by the livery of the F1 car. The lighter materials are also necessary to counter the additional weight resulting from the new powertrain. 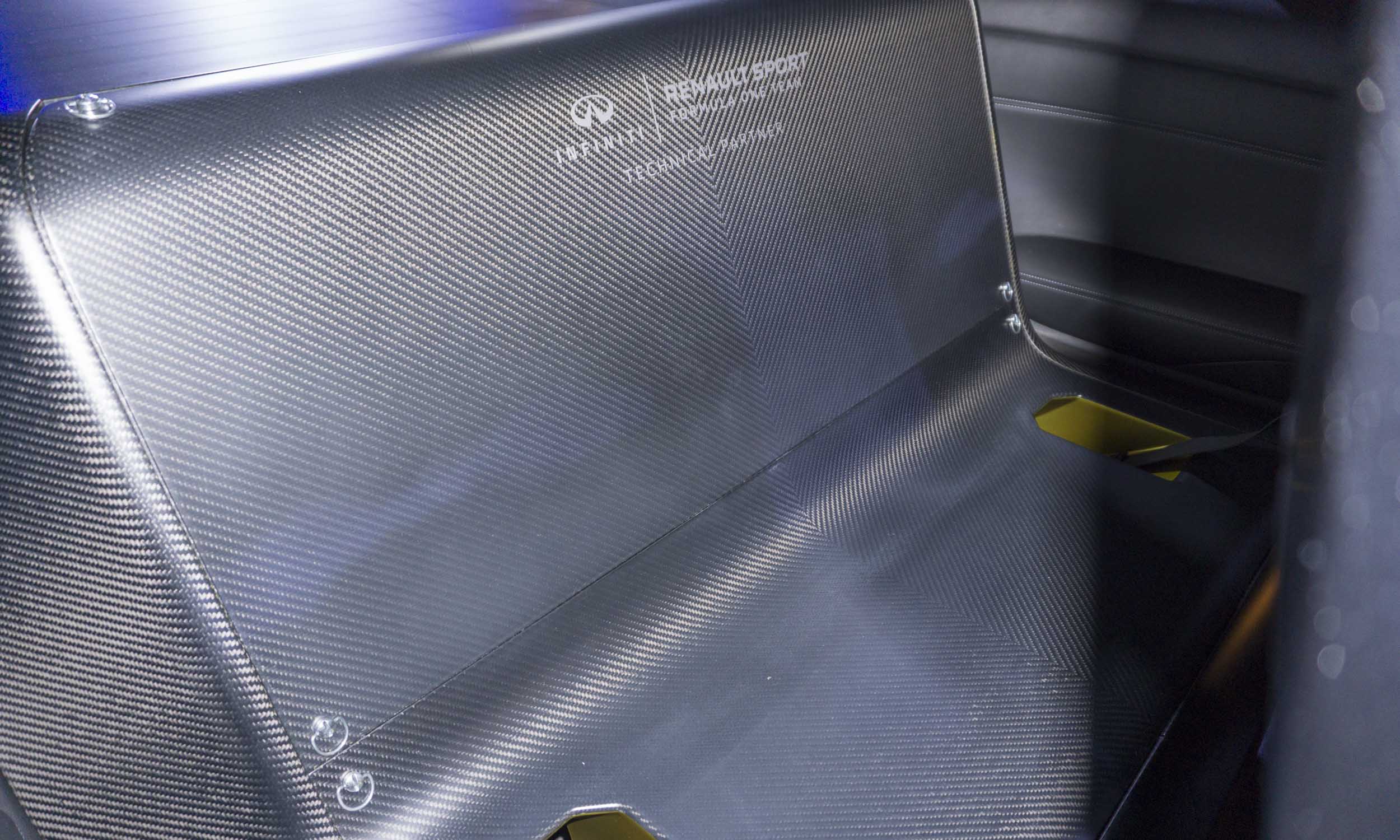 Interior Changes
The interior has been simplified from the standard Q60, in line with the Black S prototype’s race-car roots. Most noticeable is the removal of the rear seat — necessary for weight savings as well as creating space for the 4.4 kWh battery pack, energy inverter and hybrid electronic control unit. The cabin is also divided by a carbon-fiber panel with tethers for a racing harness. 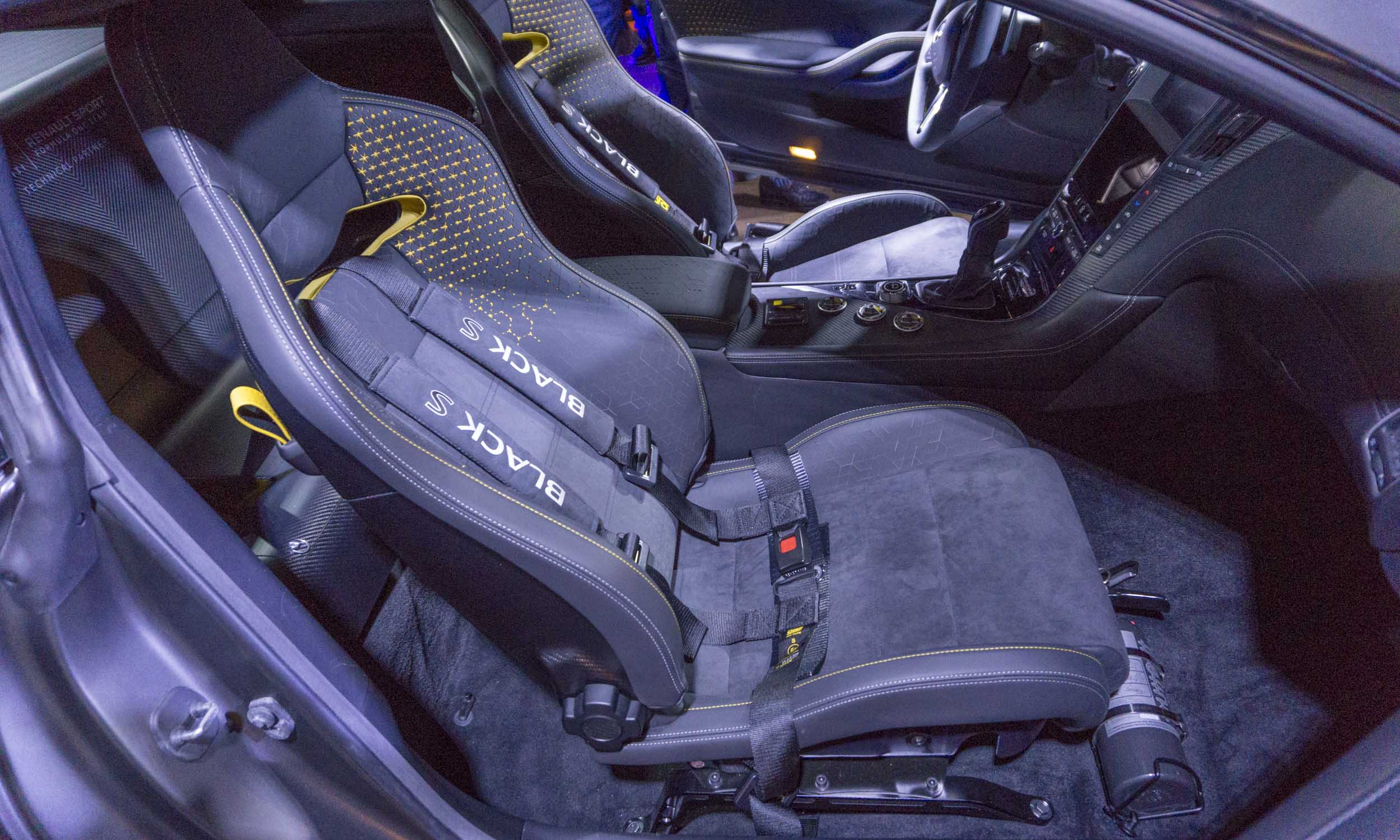 Stylish Interior
Front seats have also been replaced with a lighter carbon-fiber design, and the interior has been treated with the same black and yellow color scheme of the exterior. 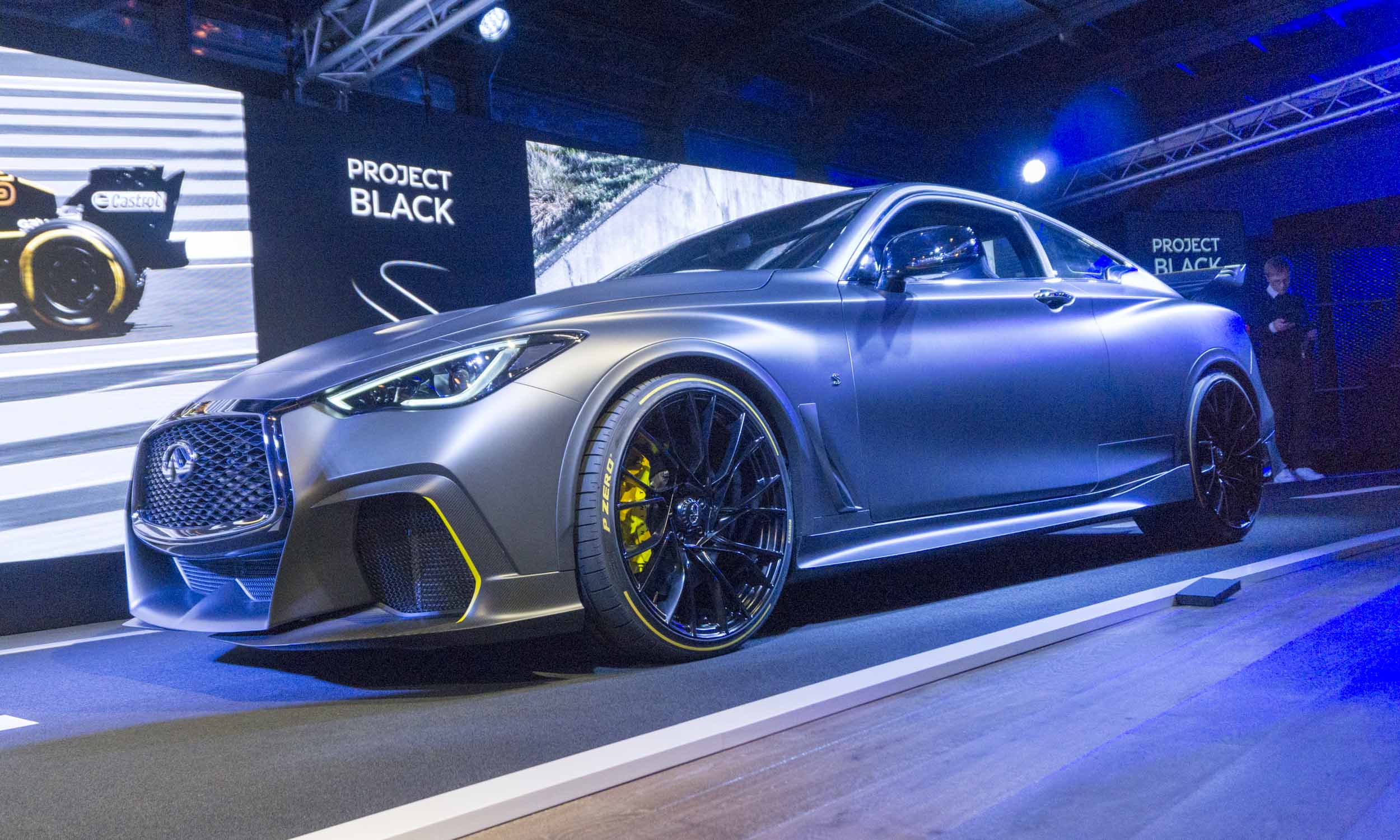 Hopefully Coming Soon
The amount of complexity in this Project Black S prototype makes it unfeasible to be mass produced as is; however, the unique hybrid system is extremely intriguing. Infiniti plans to take this car to the track before the end of the year for proper high-performance testing. We expect technical elements of this system — as well as design elements from this high-performance coupe — will at some point reach production. For now, this dual-hybrid Infiniti remains a prototypical step in Infiniti’s quest to achieve electrification for its entire model lineup.