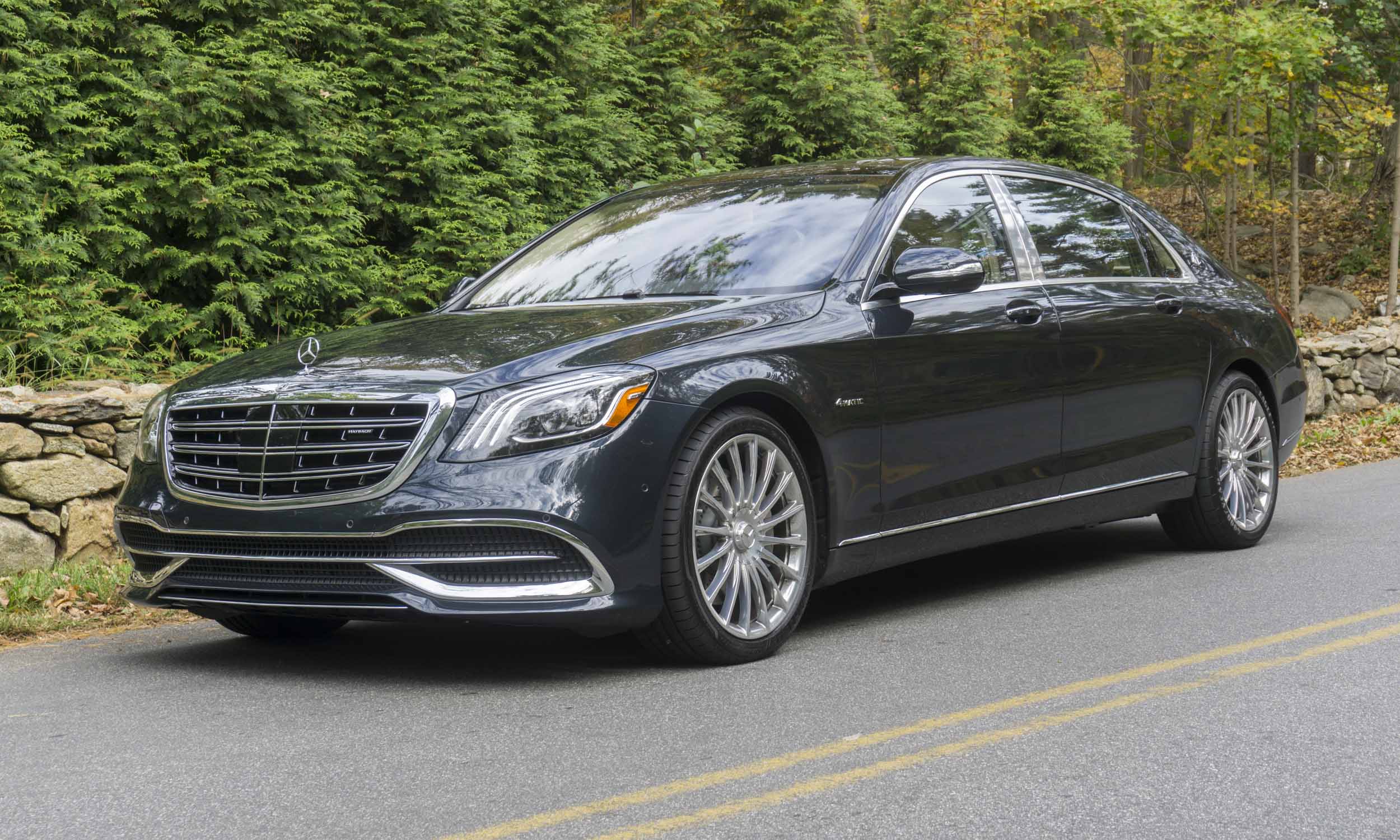 New Flagship
When a successful car company makes significant changes to its flagship luxury sedan, those close to the auto world take notice. An automaker’s flagship often showcases the latest designs and newest technologies, and the updated 2018 Mercedes-Benz S-Class certainly does that. Still based on a platform introduced in 2014, the 2018 S-Class offers a wide range of updated engines, ultra-luxurious interiors and a very long list of high-end standard features. Mercedes says more than 6,500 changes were made for 2018, making this the most comprehensive refresh ever for the S-Class. 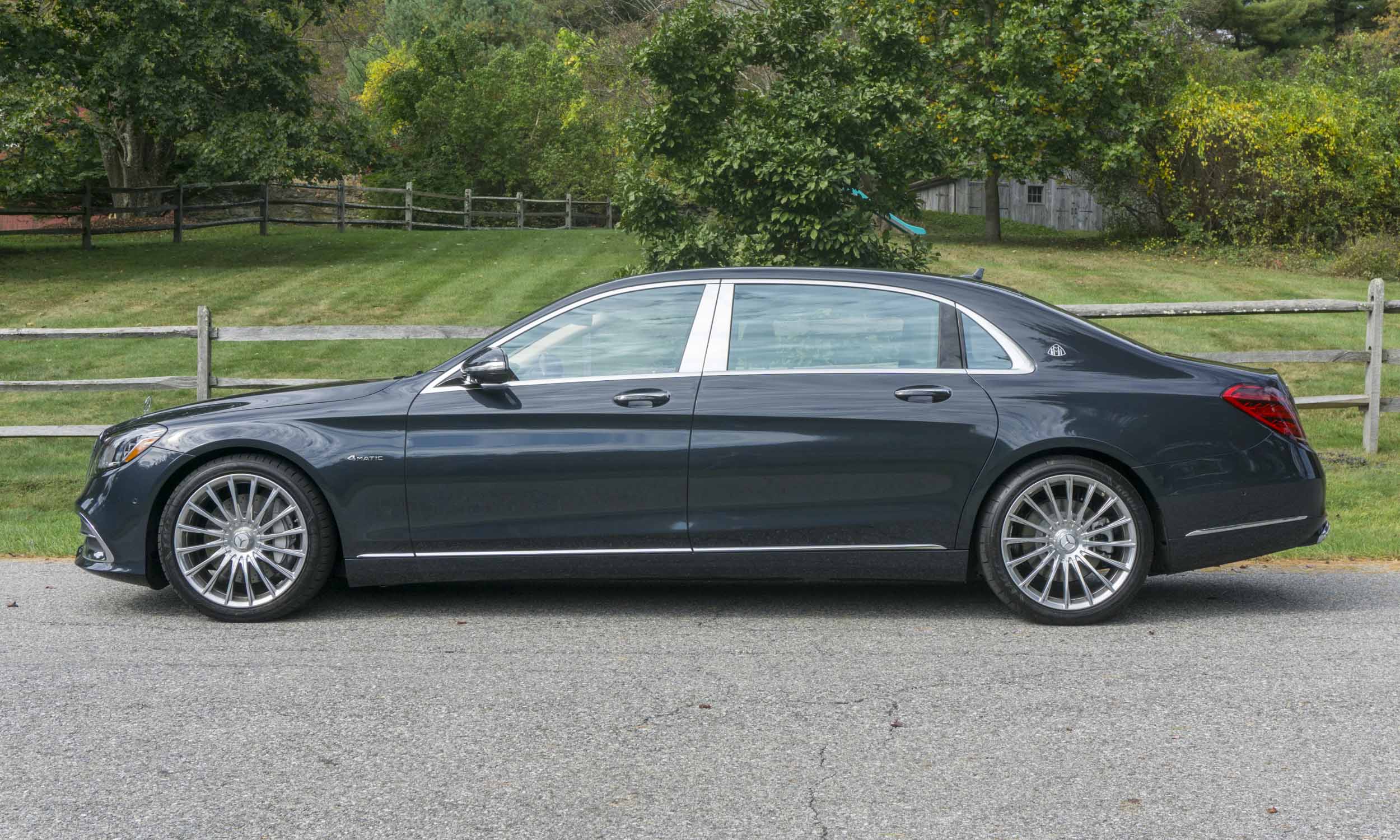 Luxury and Technology
“The development of the new S-Class was extremely extensive. With a whole series of new features and functions, the S-Class remains a technological pioneer,” said Ola Kallenius, Daimler board member responsible for group research and Mercedes-Benz car development. The new S-Class is one of the best examples of how the latest in high-tech systems can be merged with the best of old-school luxury. This merge creates a vehicle that many consider to be the bar against which all other luxury sedans are measured. 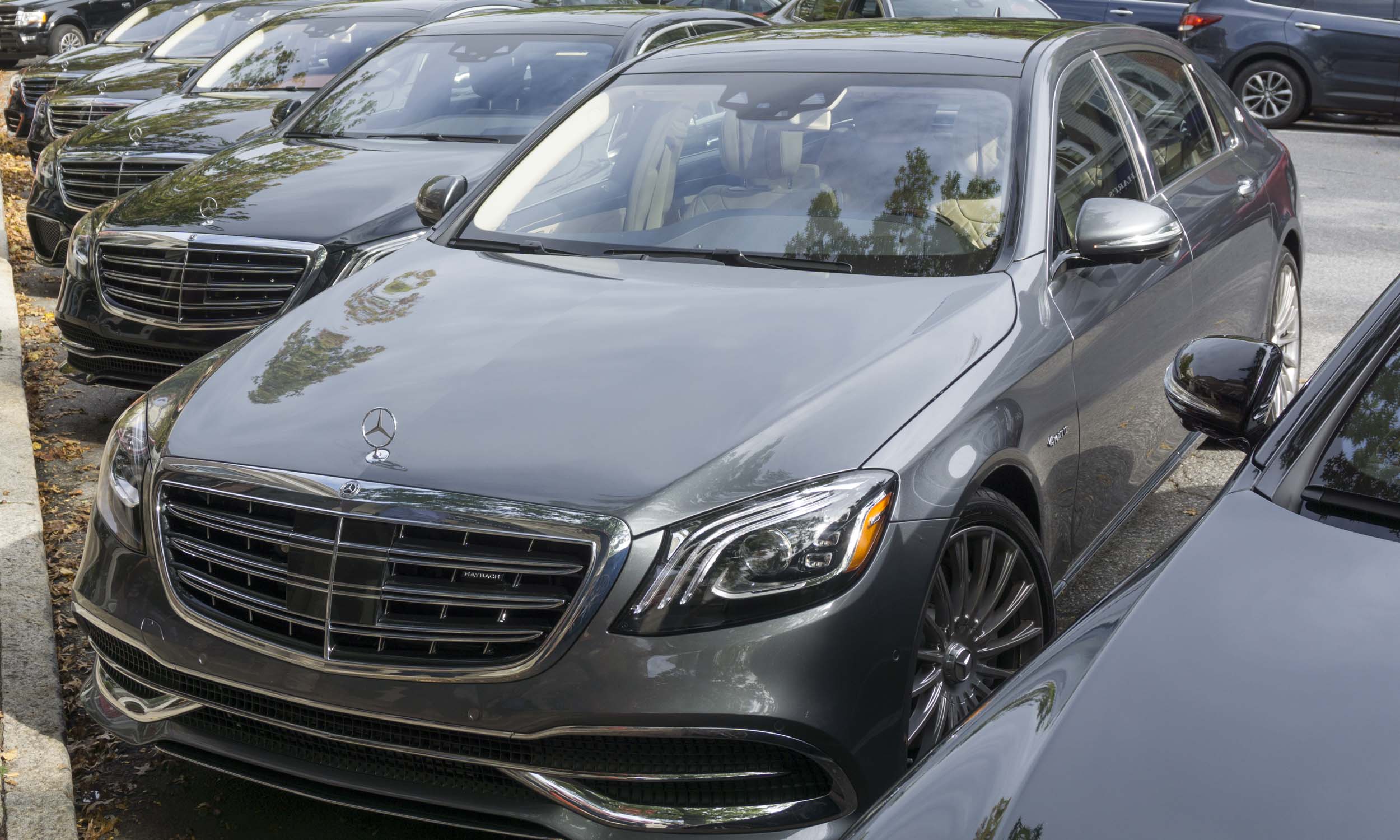 Design Refresh
In terms of styling, the new S-Class receives more of an update rather than a complete makeover. Updates front and rear include new headlights and taillights, as well as front and rear bumpers. The radiator grille that had been exclusive to the V12 models is now standard for the entire S-Class line. Two new 20-inch wheel designs also are available. Inside, the most noticeable difference is a redesigned steering wheel and a new multimedia system with dual 12.3-inch high-resolution display screens. 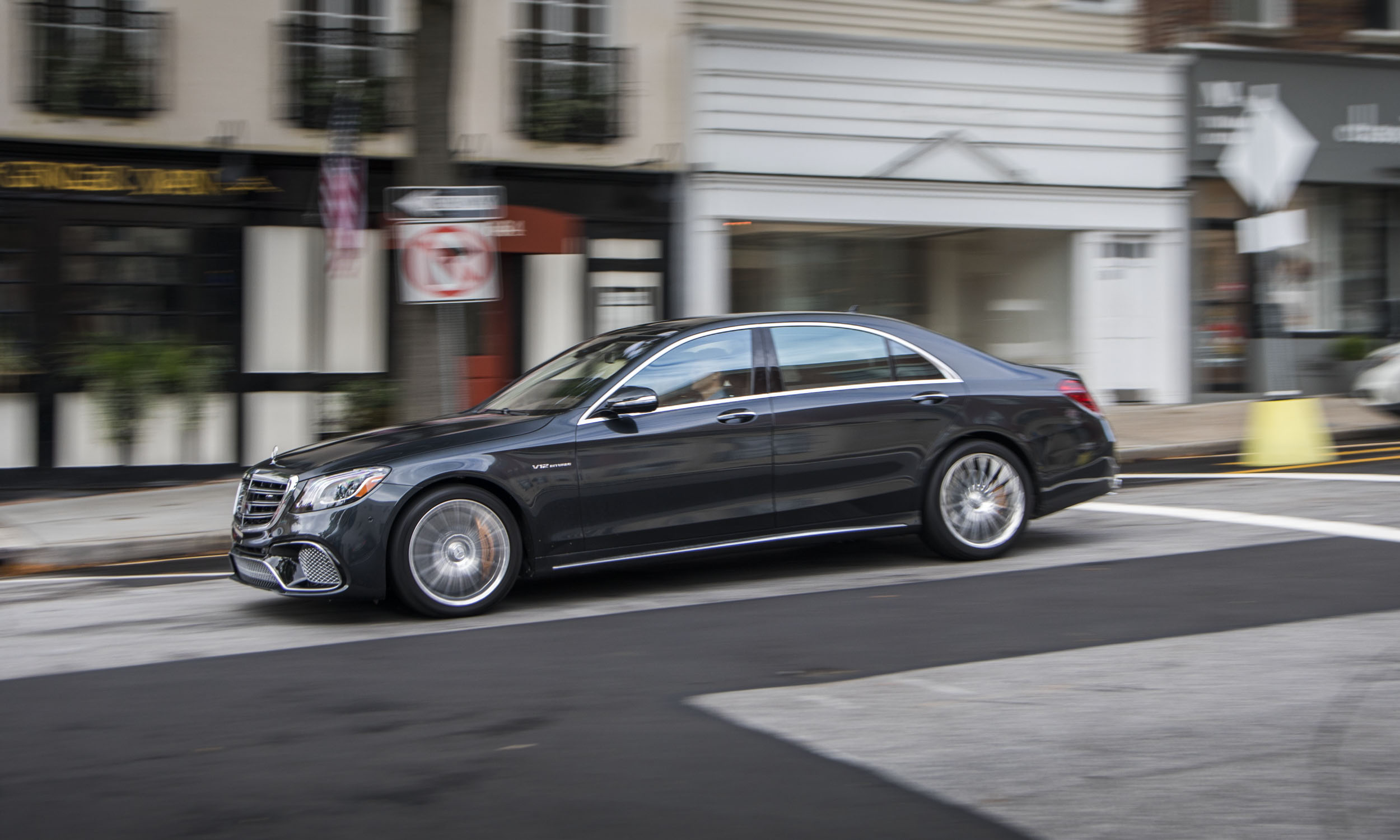 Safety
All S-Class variants come with a long list of standard safety gear. Among the highlights are active brake assist, lane-keeping assist, blind-spot assist, brake assist, crosswind assist, adaptive high-beam assist and electronic stability control. Also included is the new Intelligent Light System with Ultra-Wide Beam Headlights, which can vary the pattern of the LED headlights to illuminate corners without creating glare for other drivers. 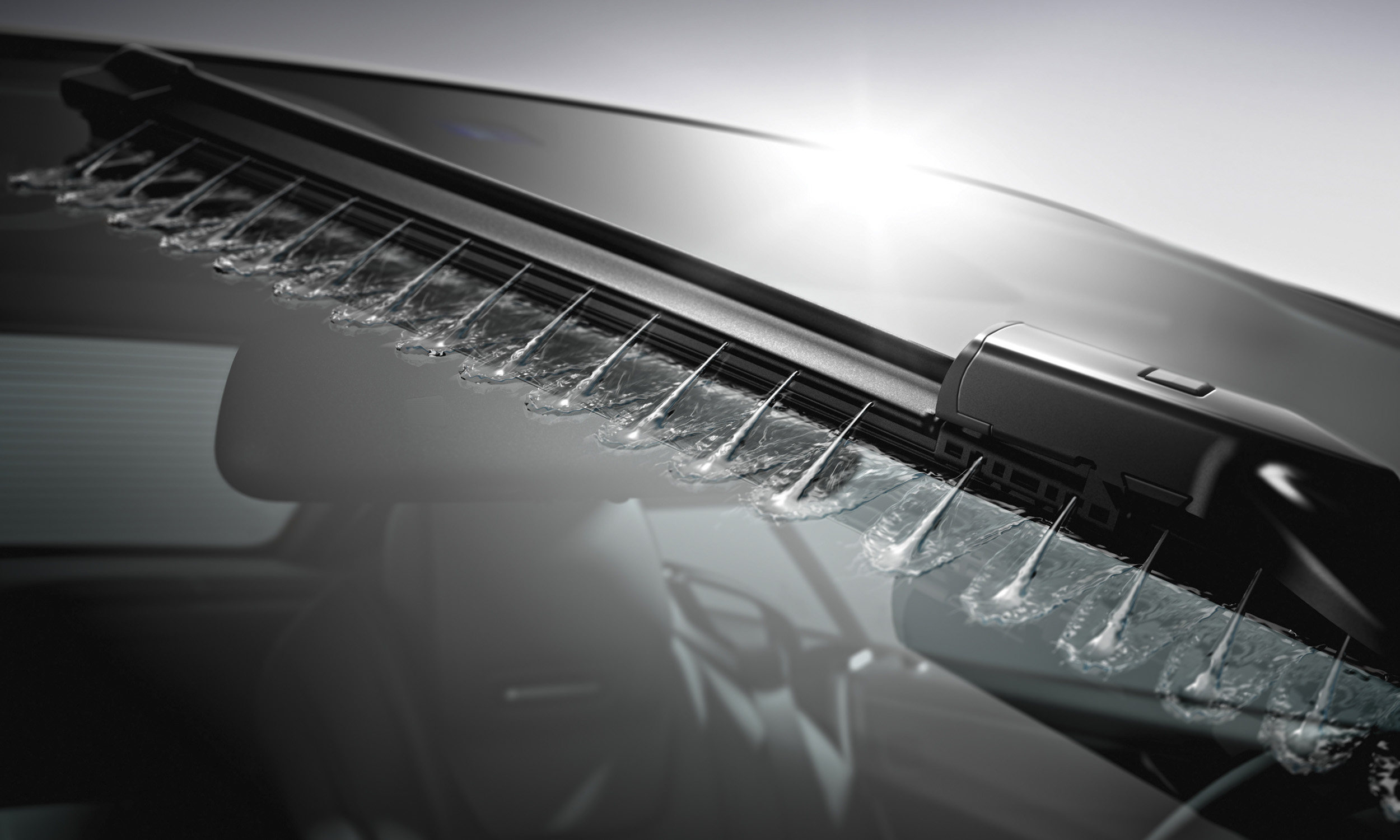 Magic Vision Control
Other added wizardry includes Magic Vision Control: wiper blades that spray washer fluid out of laser-cut holes along the length of the wiper blade, effectively clearing the windshield quicker without temporarily obscuring driver vision from point-source spray. The washer reservoir and blades are heated for enhanced effectiveness in winter weather. 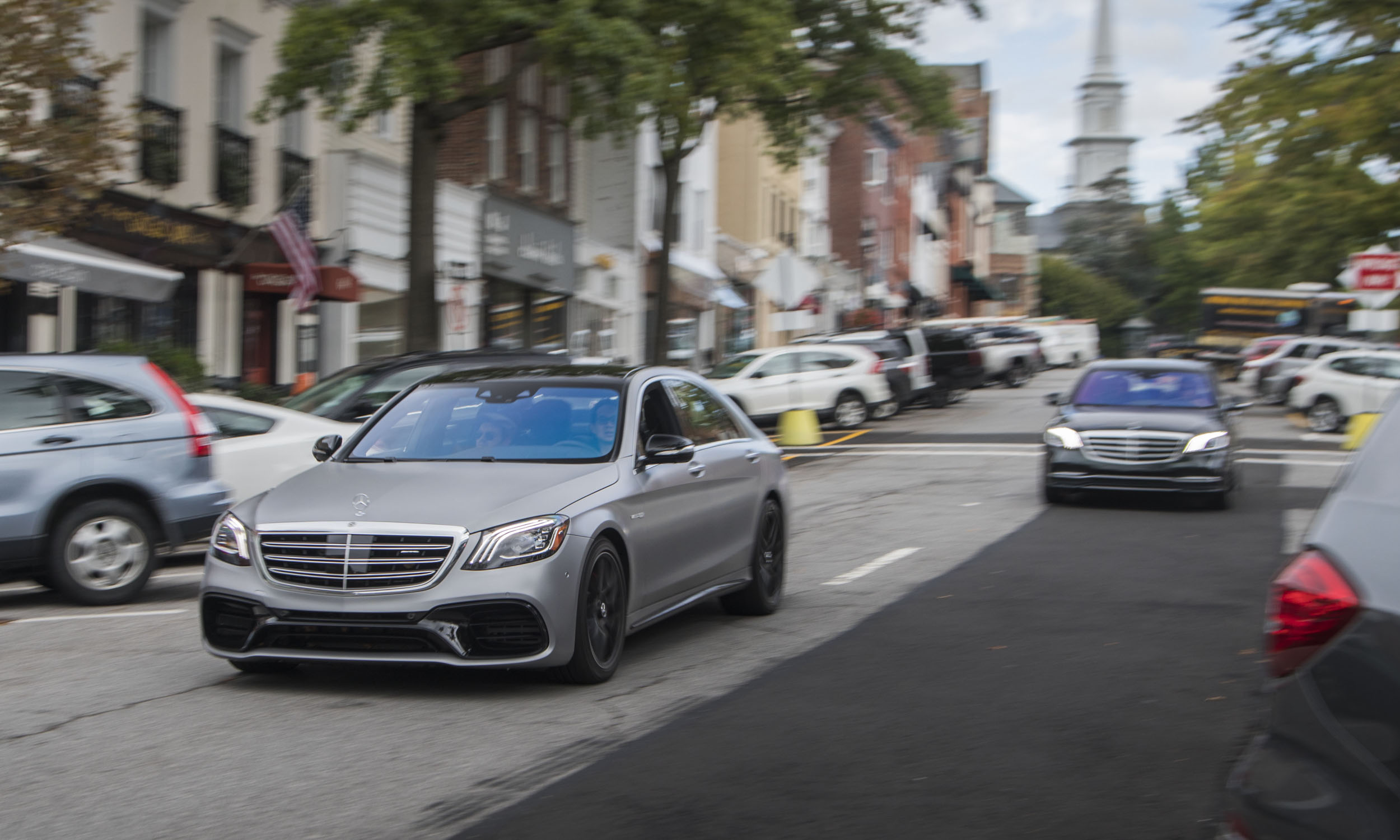 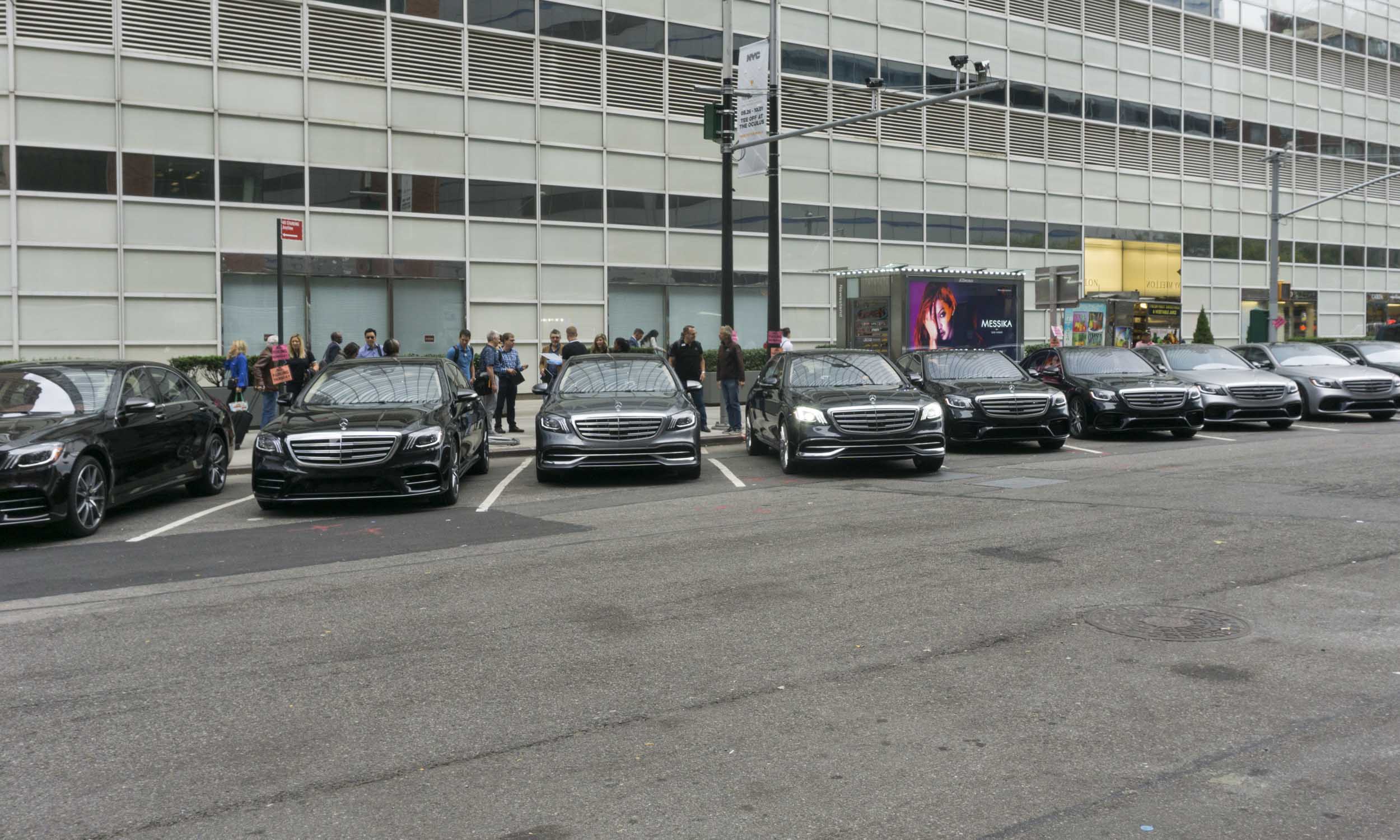 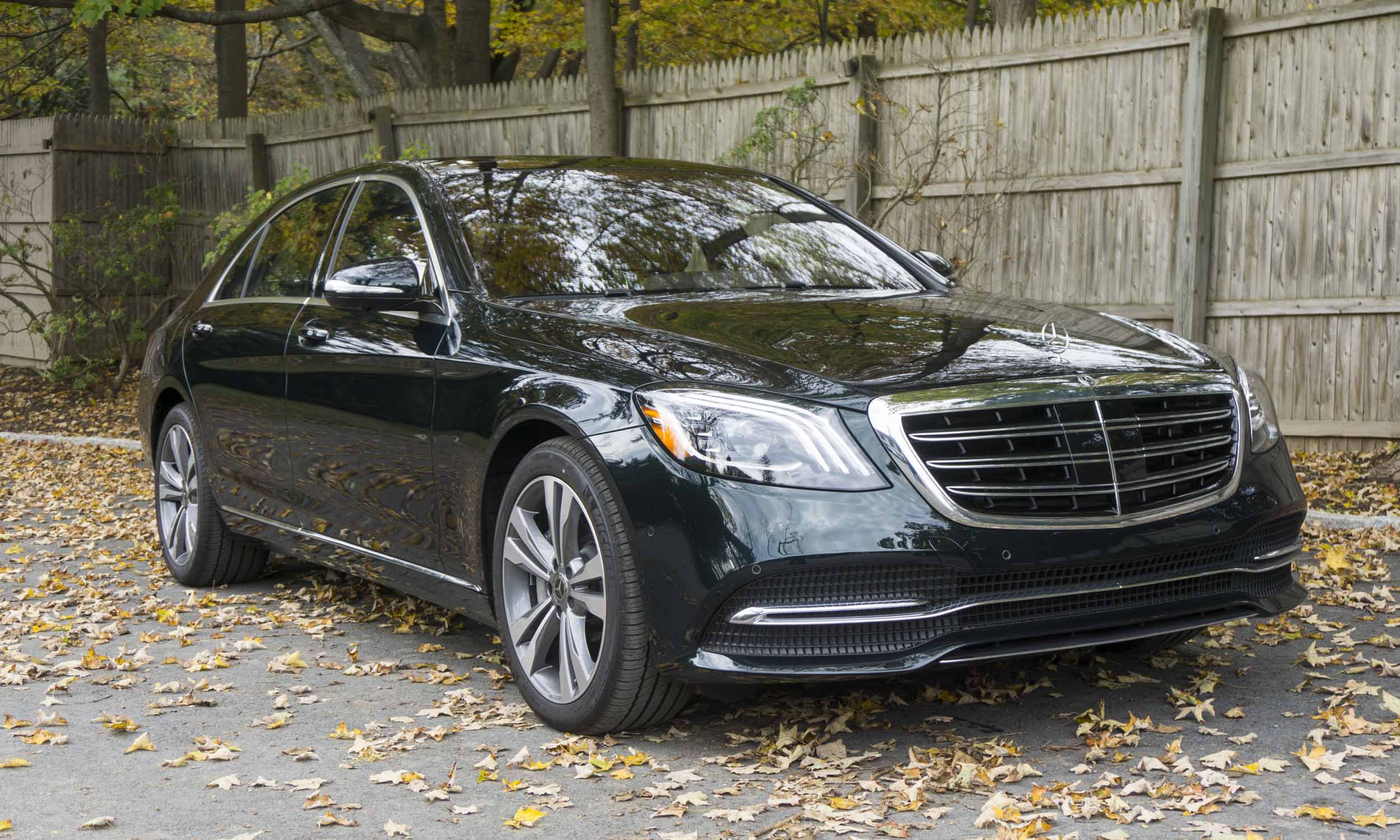 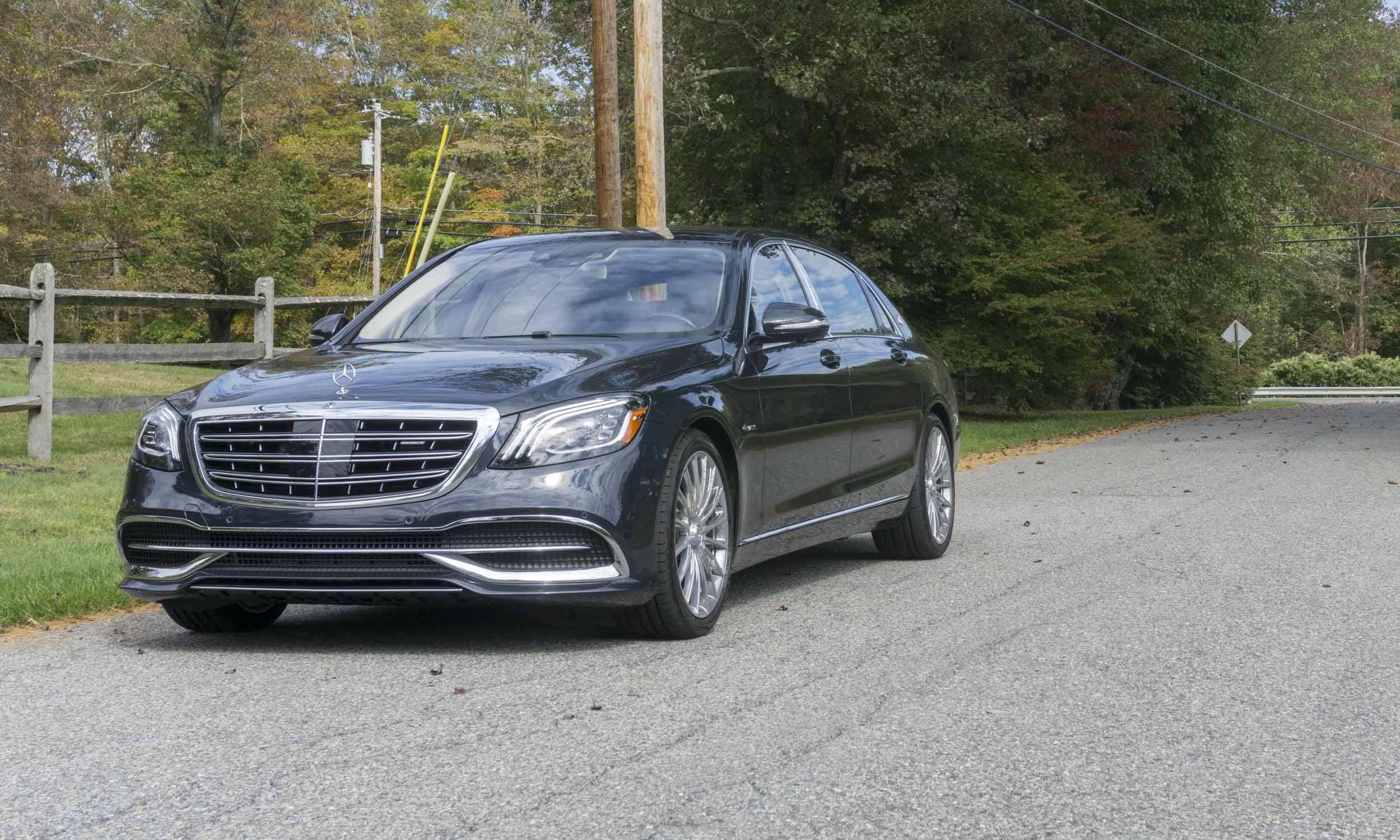 Mercedes-Maybach S560 / S650
Even though the S-Class is approaching the pinnacle of luxury, the Maybach takes things to another level, especially for rear-seat passengers. With a starting price of $168,600, the Maybach S560 features standard executive rear seats that are heated and cooled, can recline up to 43 degrees, and offer six massage programs. Ultra-soft Nappa leather and hand-finished wood can be found throughout the cabin, including a wood- and leather-trimmed steering wheel. The Maybach S560 also has standard 4MATIC all-wheel drive. Arriving a bit later in the year is the ultimate prize — the V12-powered Maybach S650. Available exclusively with rear-wheel drive, the S650 runs $198,700. 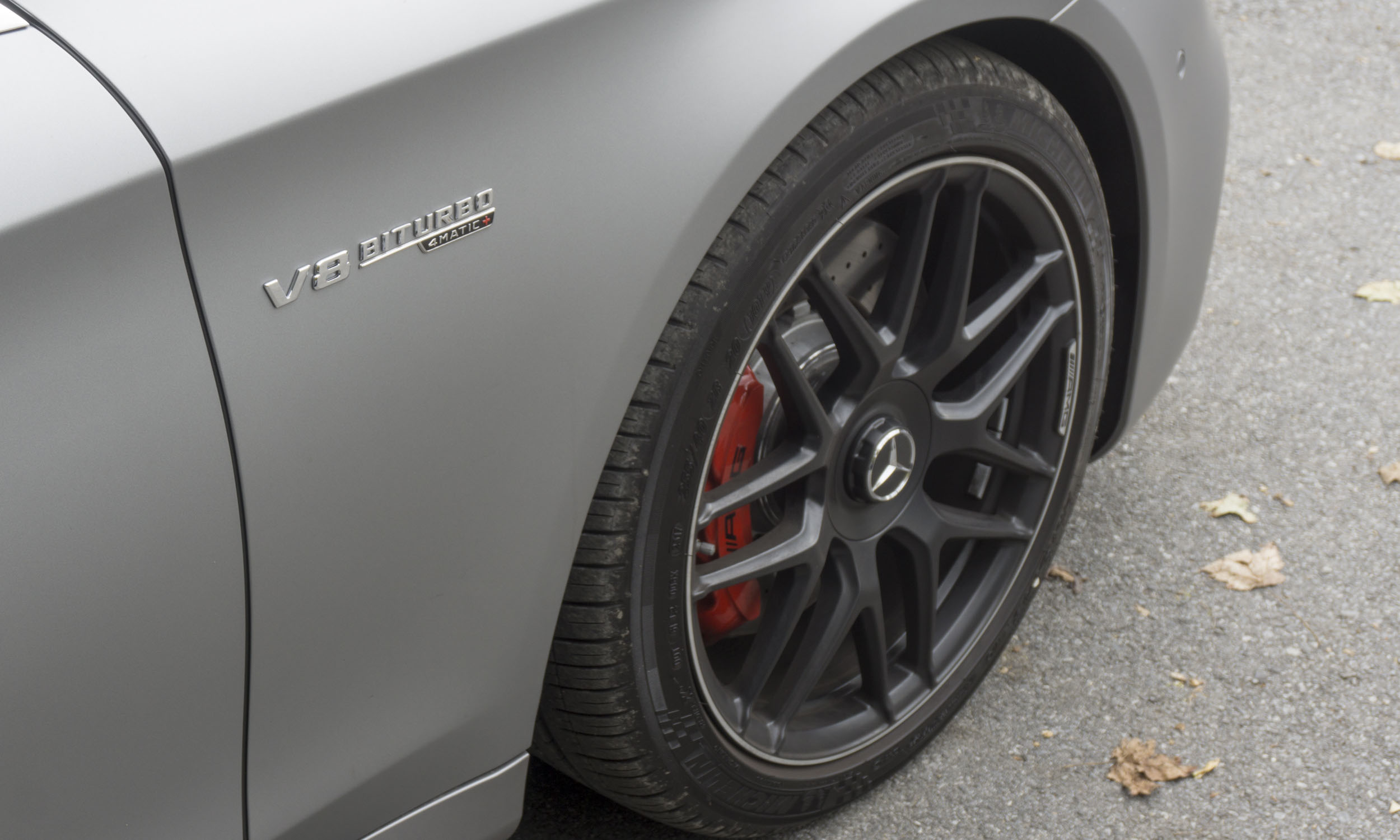 Mercedes-AMG S63
For those who require an articulate merging of ultra-luxury with extreme performance, behold the S-Class models from AMG. With a starting price of $147,500, the powerful S63 stands out with AMG bodywork that includes large air intakes in the front apron, flared side sills, 20-inch AMG 5-spoke wheels and — a hallmark of the AMG line — the AMG performance exhaust system with quad exhaust outlets. The interior has a unique flat-bottomed AMG steering wheel with aluminum paddle shifters in addition to the luxurious accoutrement found in the standard S-Class. 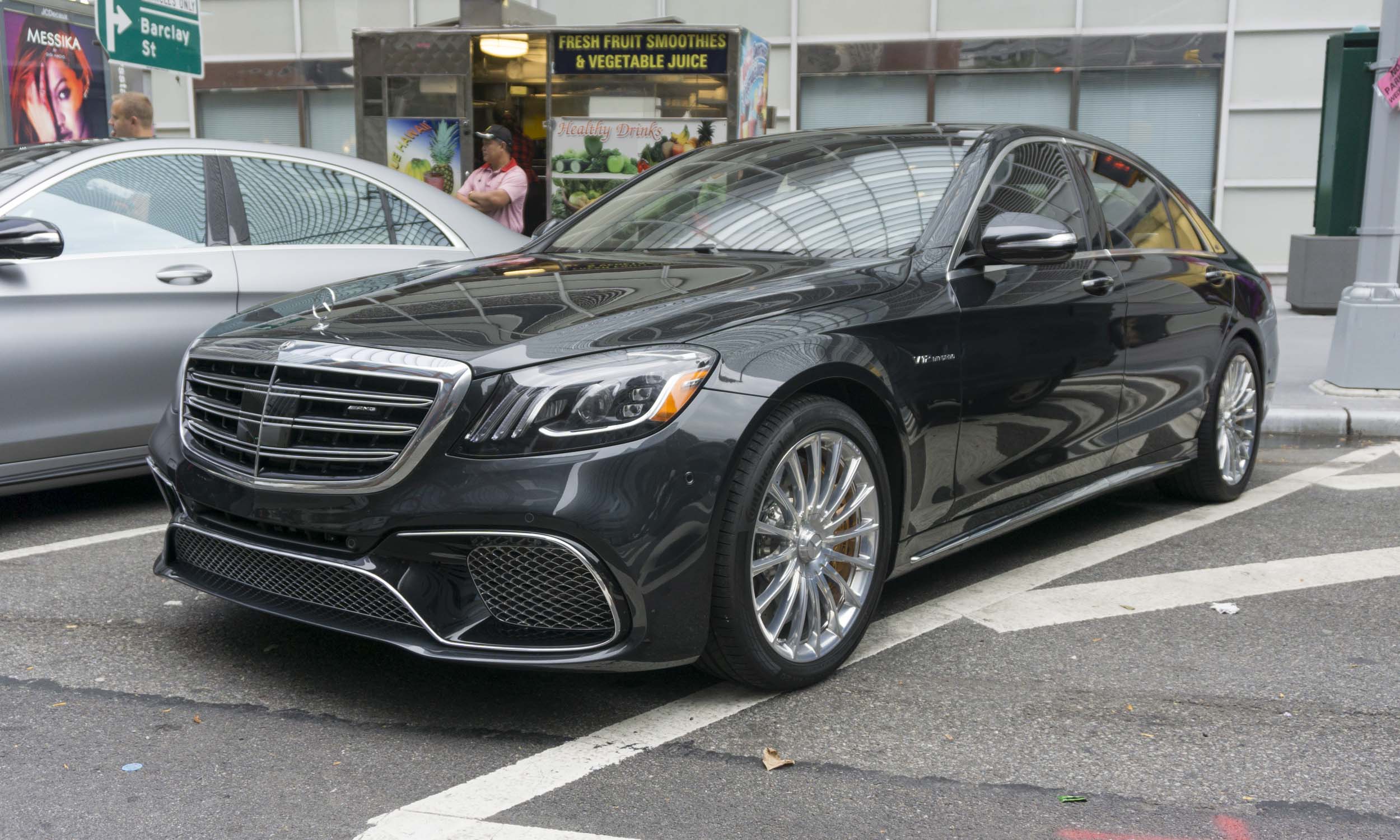 Mercedes-AMG S65
Although the S63 is quicker than other S-Class variants, the V12-powered S65 sits atop the entire S-Class lineup. Loaded with practically every feature imaginable, the S65 has a base price of $229,500. Granted, for most buyers in this price range it’s more about prestige than performance. 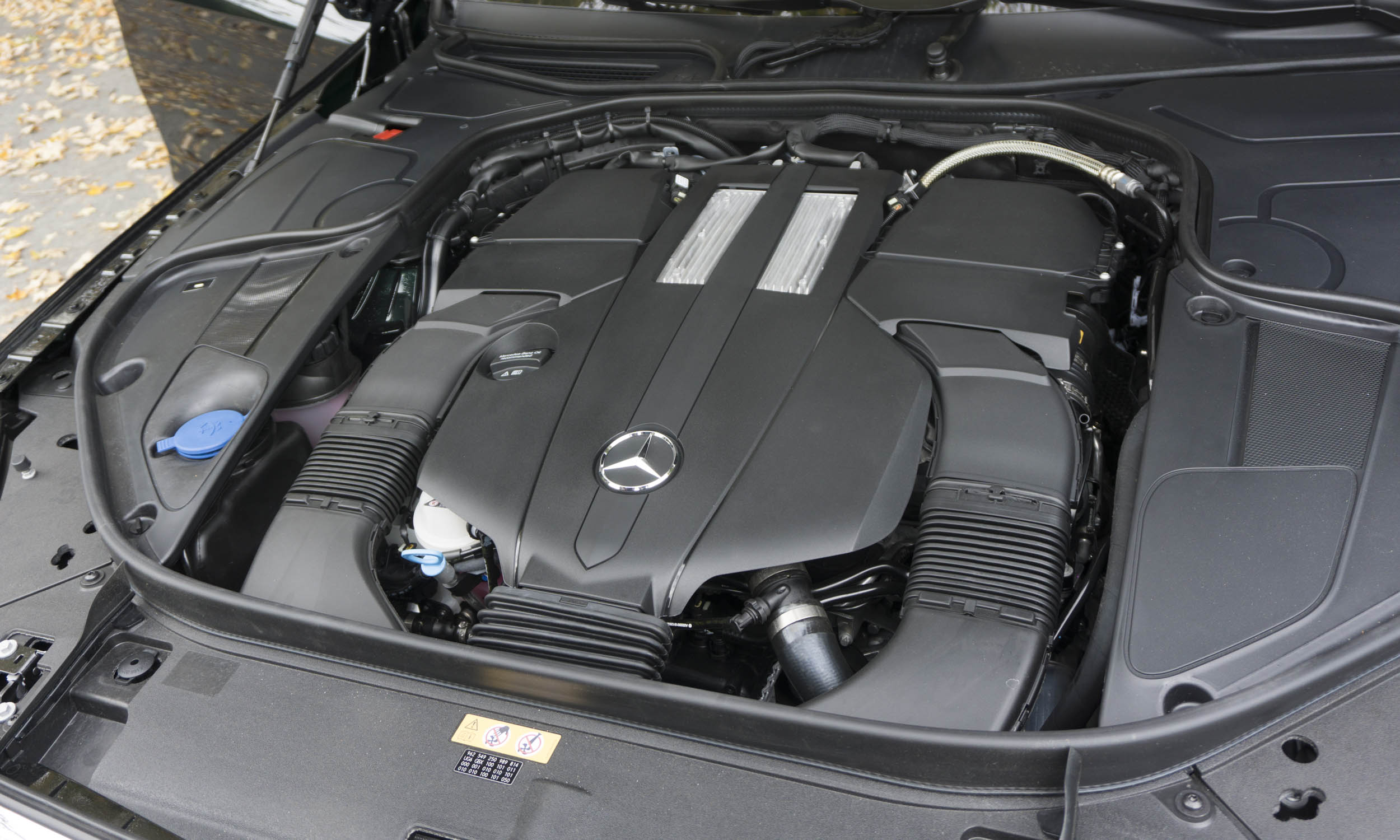 Under the Hood
The S-Class is available with a variety of engines, starting with the return of a V6 option in the S450. The American-market S-Class has not had a V6 for several years; the S450 gets a 3.0-liter biturbo V6 putting out 362 horsepower and 369 lb-ft of torque. Power is sent through a 9-speed automatic transmission with either rear-wheel drive or 4MATIC all-wheel drive. The S450 can reach 60 mph in around 5 seconds and is rated at 19 mpg city / 28 mpg hwy / 22 mpg combined. Acceleration is slightly quicker but fuel economy suffers slightly with the 4MATIC. 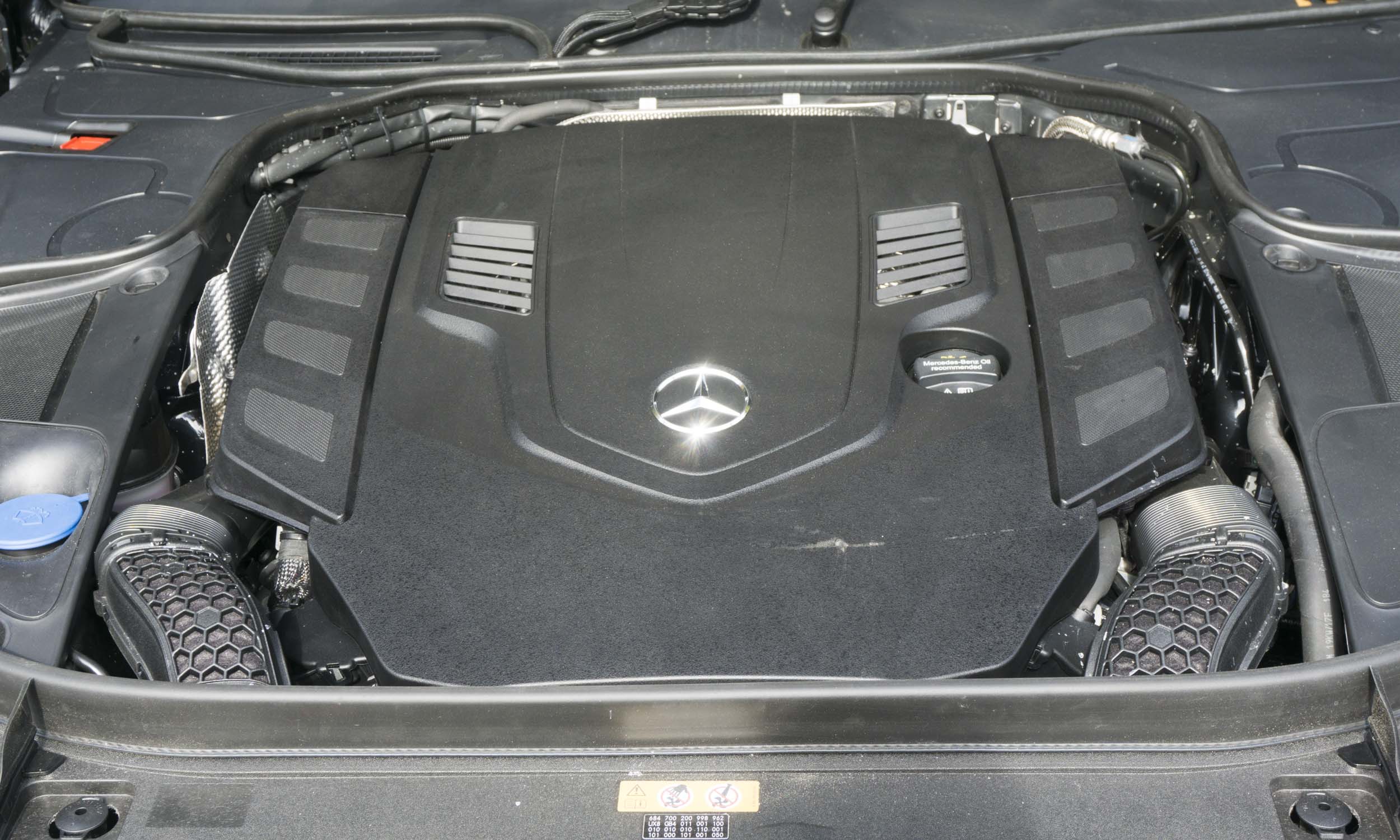 V8 Power
The S560 replaces the S550 and gets a smaller but more powerful and more efficient V8. The 4.0-liter biturbo V8 puts out 463 horsepower and 516 lb-ft of torque. With considerably more power than the S450, the S560 sprints from zero to 60 mph in about 4.5 seconds while fuel economy remains very similar to the V6: 17 mpg city / 27 mpg highway / 21 mpg combined. The Maybach S560 uses the same engine, but this larger, heavier vehicle takes slightly longer to reach 60 mph and travels a few less miles per gallon. 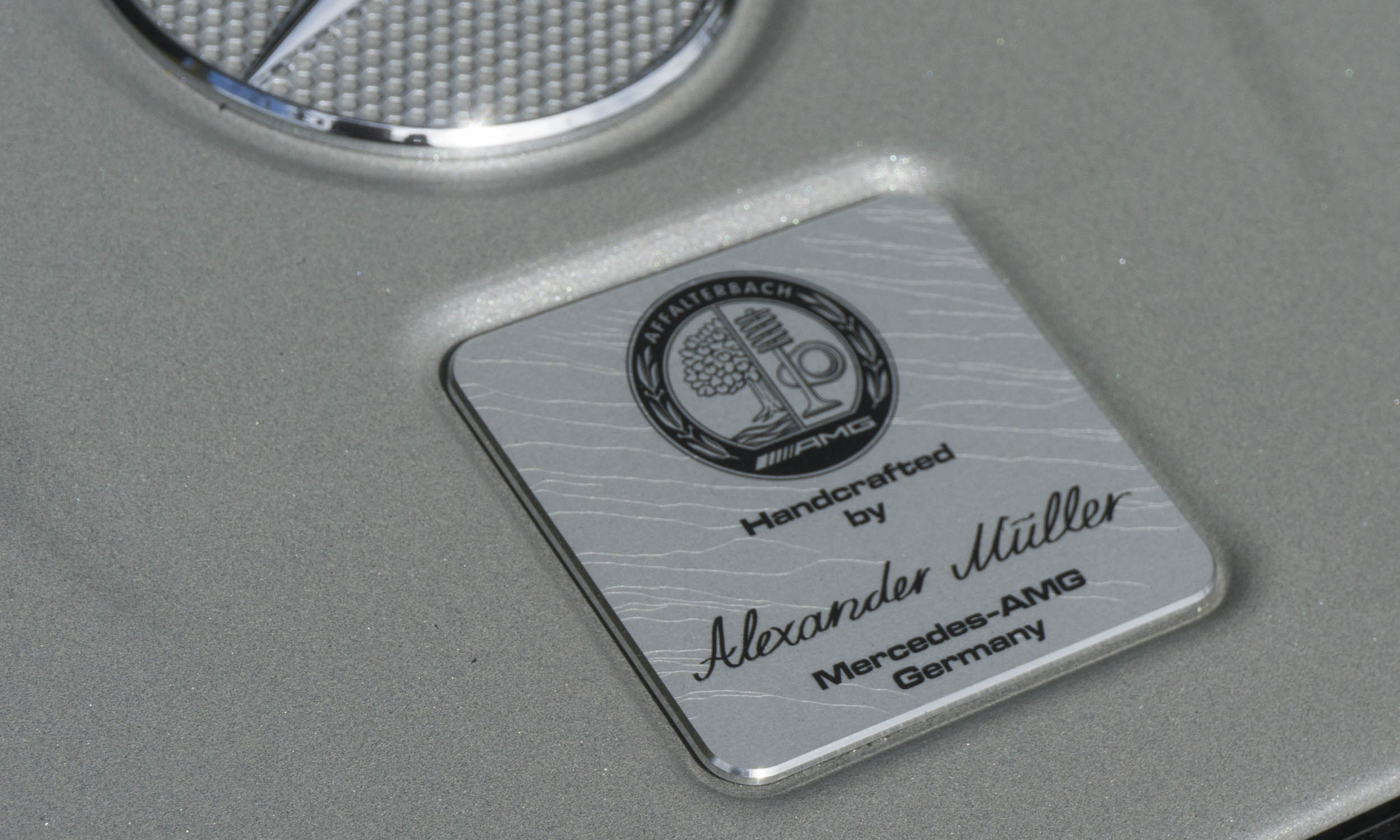 AMG Performance
Every AMG engine is hand-built by one of about 60 specially-trained engineers, and when each engine is complete the builder’s name goes on a nameplate affixed to the engine. The engine built for the S63 is a 4.0-liter biturbo V8, although this one produces an impressive 603 horsepower and 664 lb-ft of torque. Teamed with an AMG Speedshift 9-speed transmission, the S63 rockets to 60 mph in a mere 3.4 seconds. This number is quite amazing, especially given that this is a very large luxury sedan that weighs close to 5,000 pounds. Fuel economy is much better than expected: 17 mpg city / 26 mpg highway / 20 combined. However, on our press drive we soon discovered that a  heavy right foot brings those numbers down considerably. 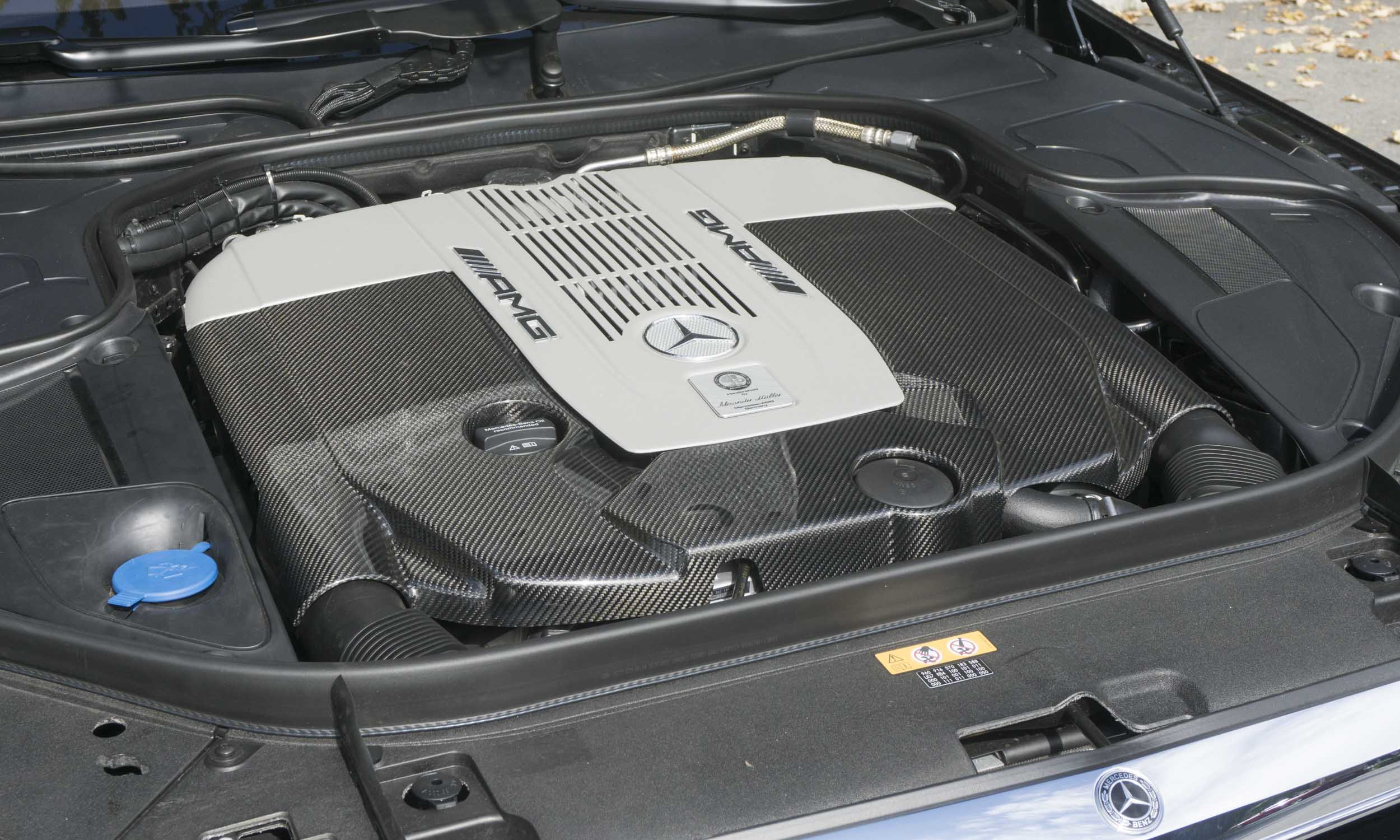 Big V12
For those who require ultimate bragging rights, AMG also offers a 6.0-liter V12 unit. Powering the S65 as well as the Maybach S650, the big V12 generates rather larger numbers: 621 horsepower and 738 lb-ft of torque. The V12 is teamed with a 7-speed automatic transmission and is only available with rear-wheel drive. Surprisingly, the S63 is slightly quicker than the V12-powered S65, but that’s primarily due to the V12’s added weight and superior traction of the S63’s AMG Performance 4MATIC all-wheel-drive system. 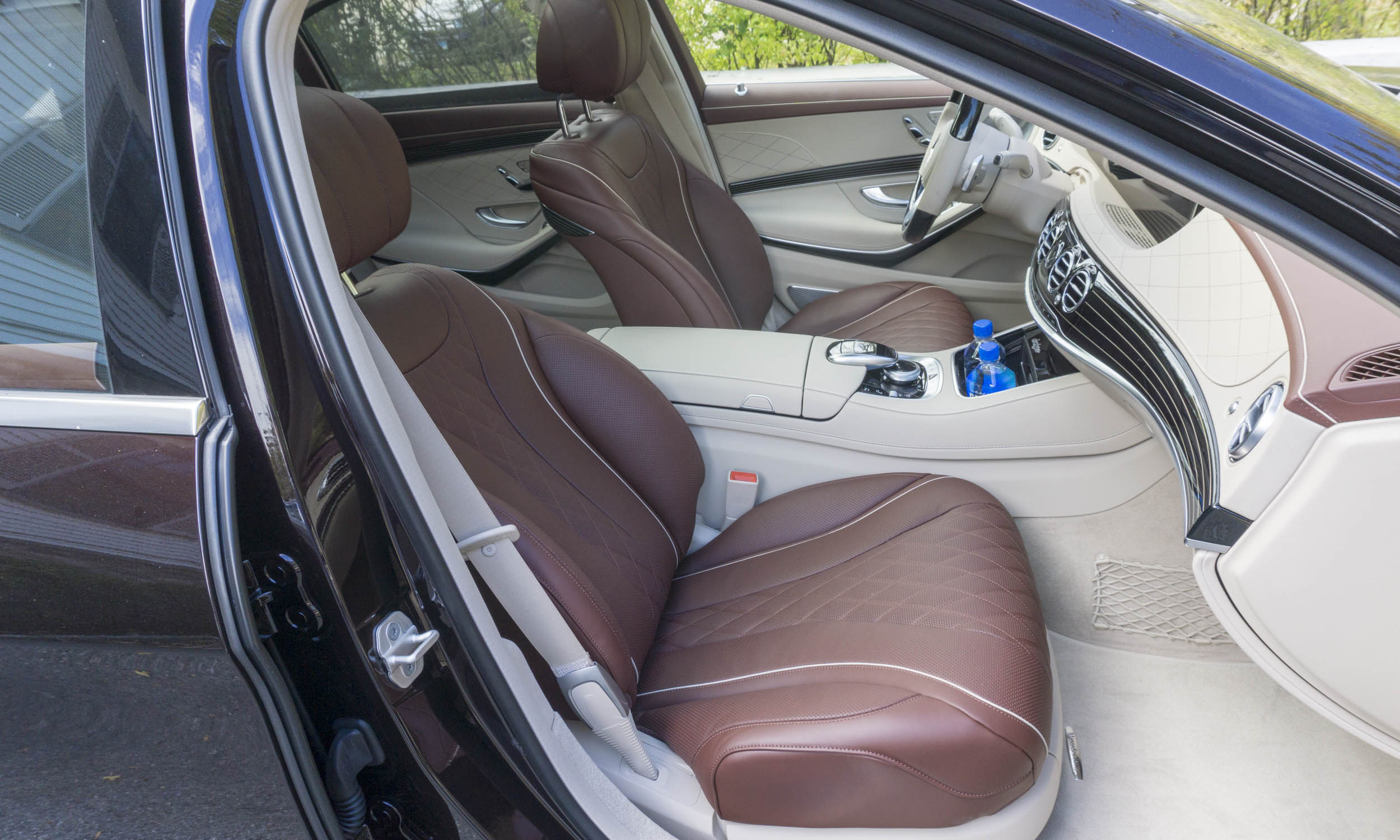 Inner Space
From the base-level S450 to the Maybach, the S-Class is the epitome of luxury. Front-seat passengers will enjoy the big, comfortable seats with available heating, cooling and massage functions. Two cupholders occupy the center console, with space for bottles in the doors; however, given the size of the car we were surprised there wasn’t flat space for phone placement. 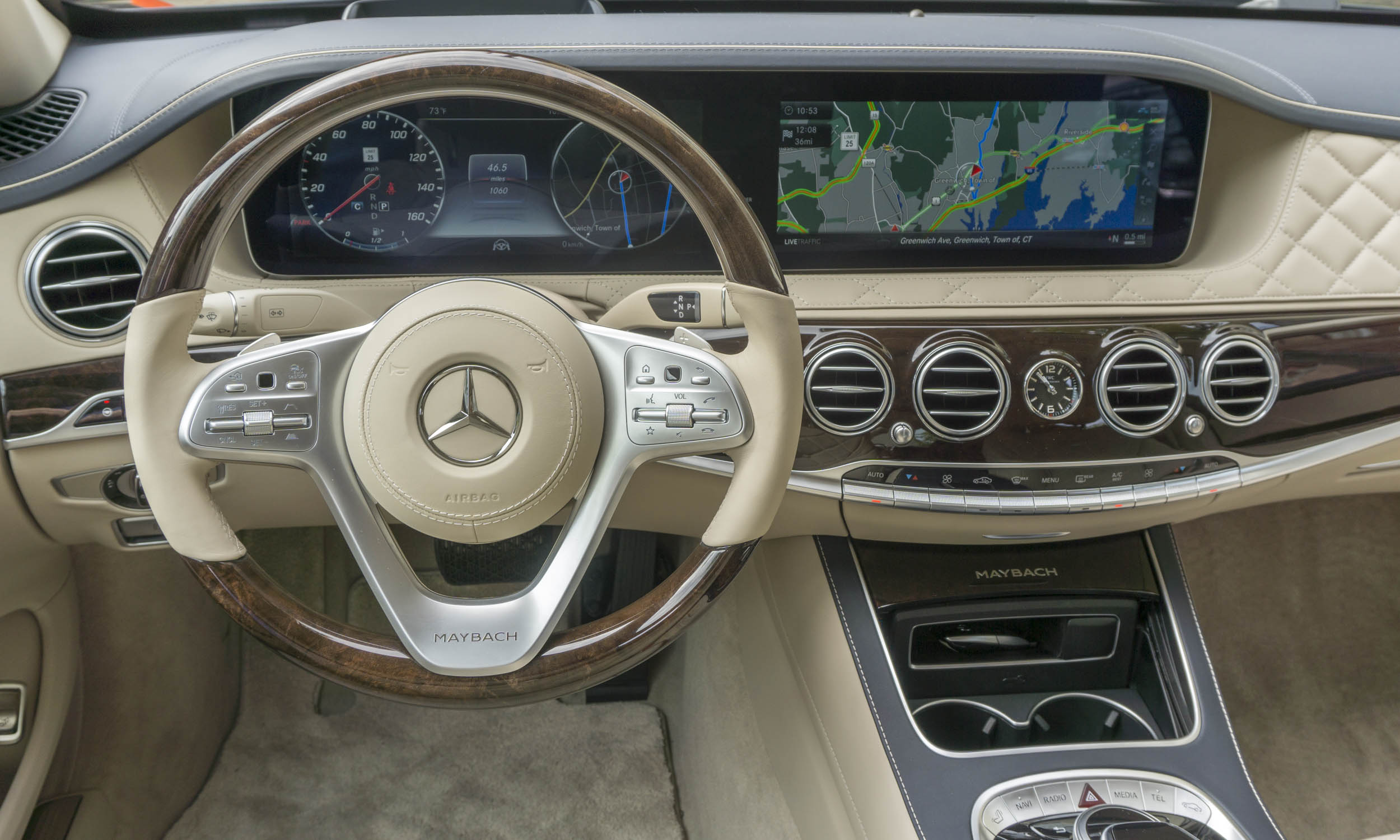 Integrated Display
Another new feature for 2018 is the integration of the central display screen and digital instrument cluster behind one pane of glass, giving the appearance of one large digital display. Not only are these both very clear and easy to read, it gives this big luxury sedan a futuristic high-tech look. 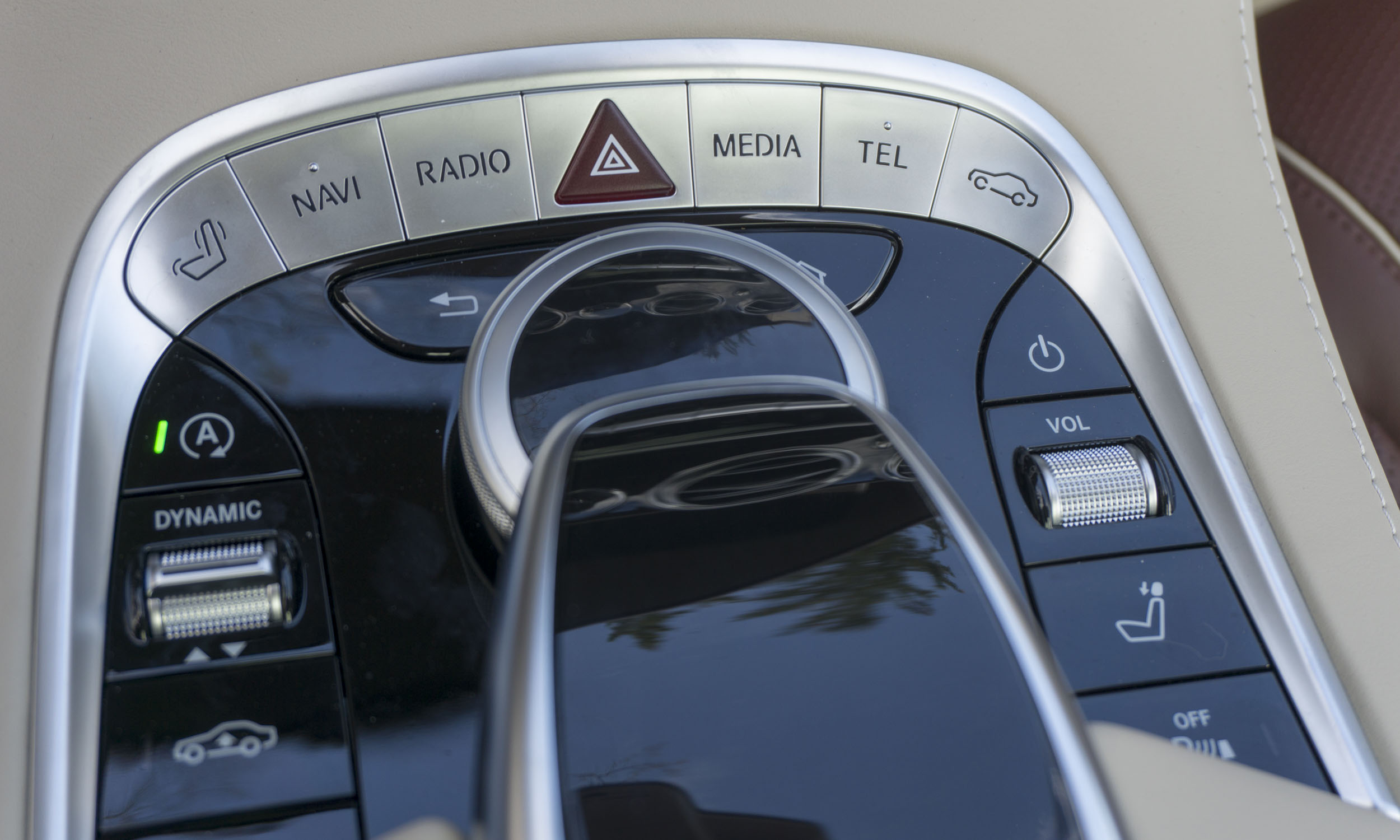 Interface
All of the entertainment, navigation and convenience functions are controlled via a collection of hard buttons, a touch pad and a rotary knob in the center console. Although it sounds complicated, the controls have considerable redundancy, which means drivers can choose the interface method that works best for them. Additional controls on the steering wheel change menus and displays in the gauge cluster. 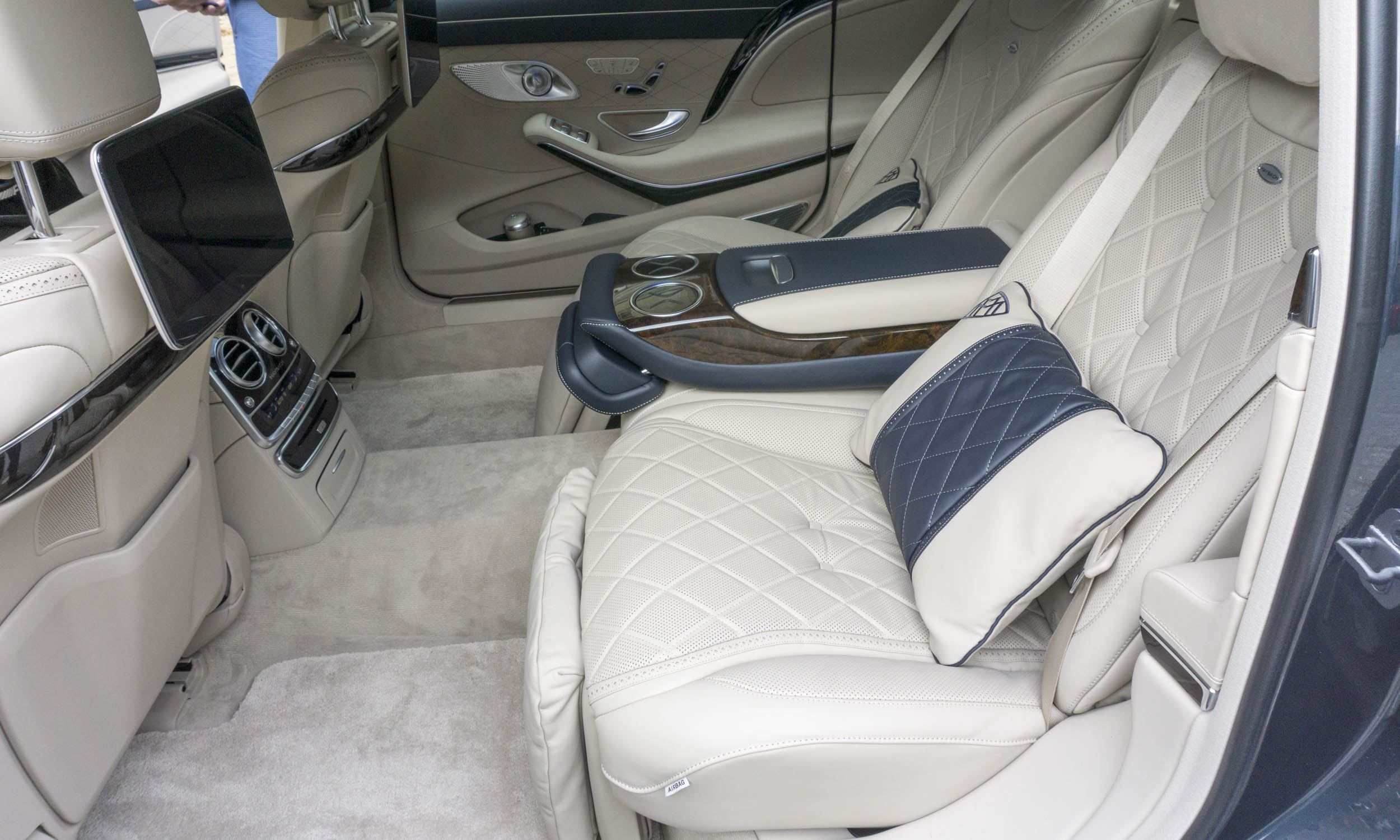 Rear Seat
Any level of S-Class offers a rear seat with plenty of legroom and space to easily transport three adults; that being said, in most configurations the space is better suited to two occupants. Plentiful rear seating options include an Executive Rear Seat Package with folding tables and heated / cooled rear cupholders. The Maybach S-Class offerings go a step beyond with custom pillows; heated / cooled / reclining / massaging rear seats with power footrests; as well as an available refrigerator and handcrafted silver champagne flutes. 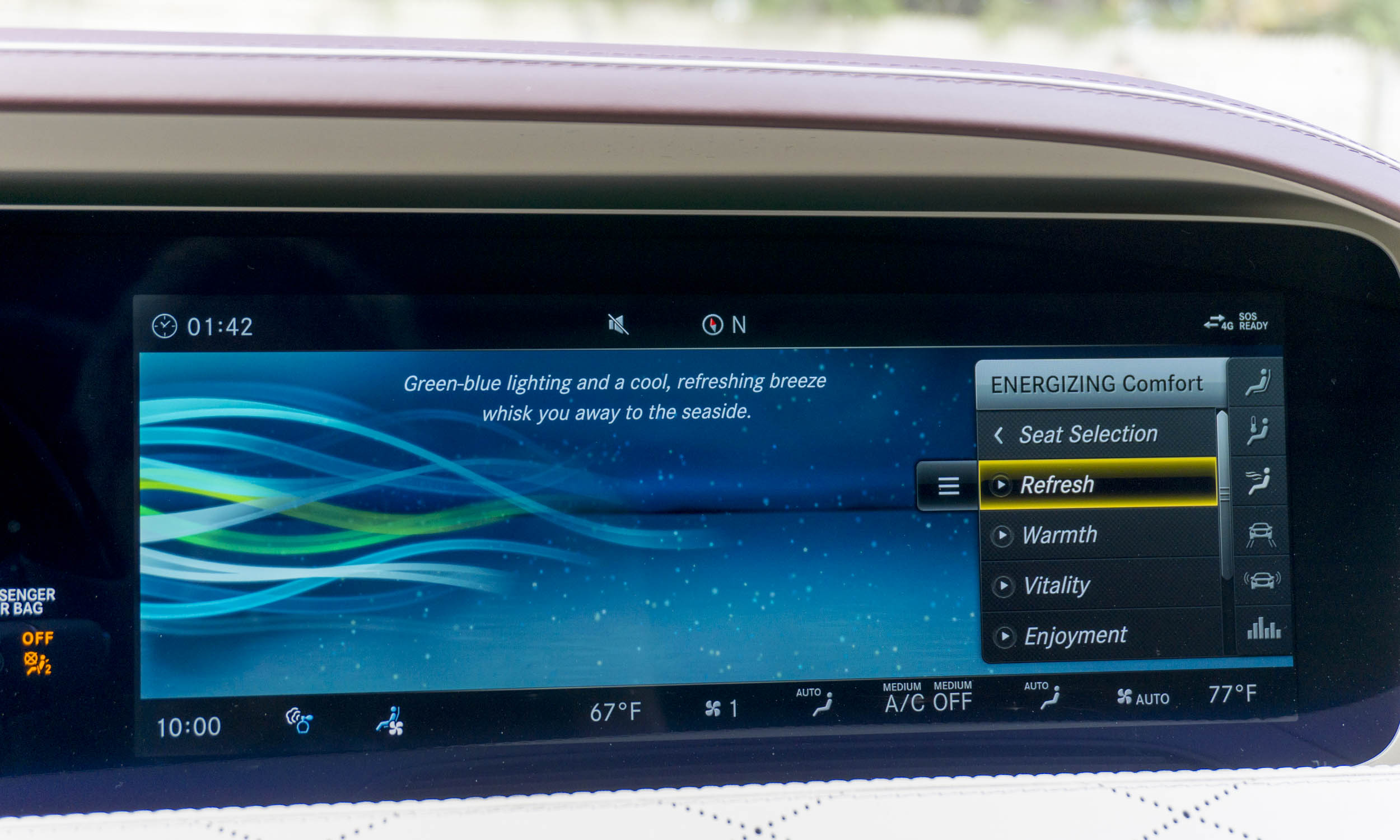 Energizing Comfort
One of the standout features of the new S-Class is all about enhancing the whole driving experience. Energizing Comfort Control features six 10-minute selectable programs that create an entire experience making use of the aromatherapy (yes, there is an Air Balance fragrance system), ambient lighting, climate control, the audio system, seat heaters and coolers and seat massagers. Programs include Refresh, Warmth, Vitality, Joy, Well Being and Training. Each has a unique screen design as well as an associated selection of music. If a phone containing music gets connected to the S-Class, the system is sophisticated enough to select music of a similar style and include it in the mix. 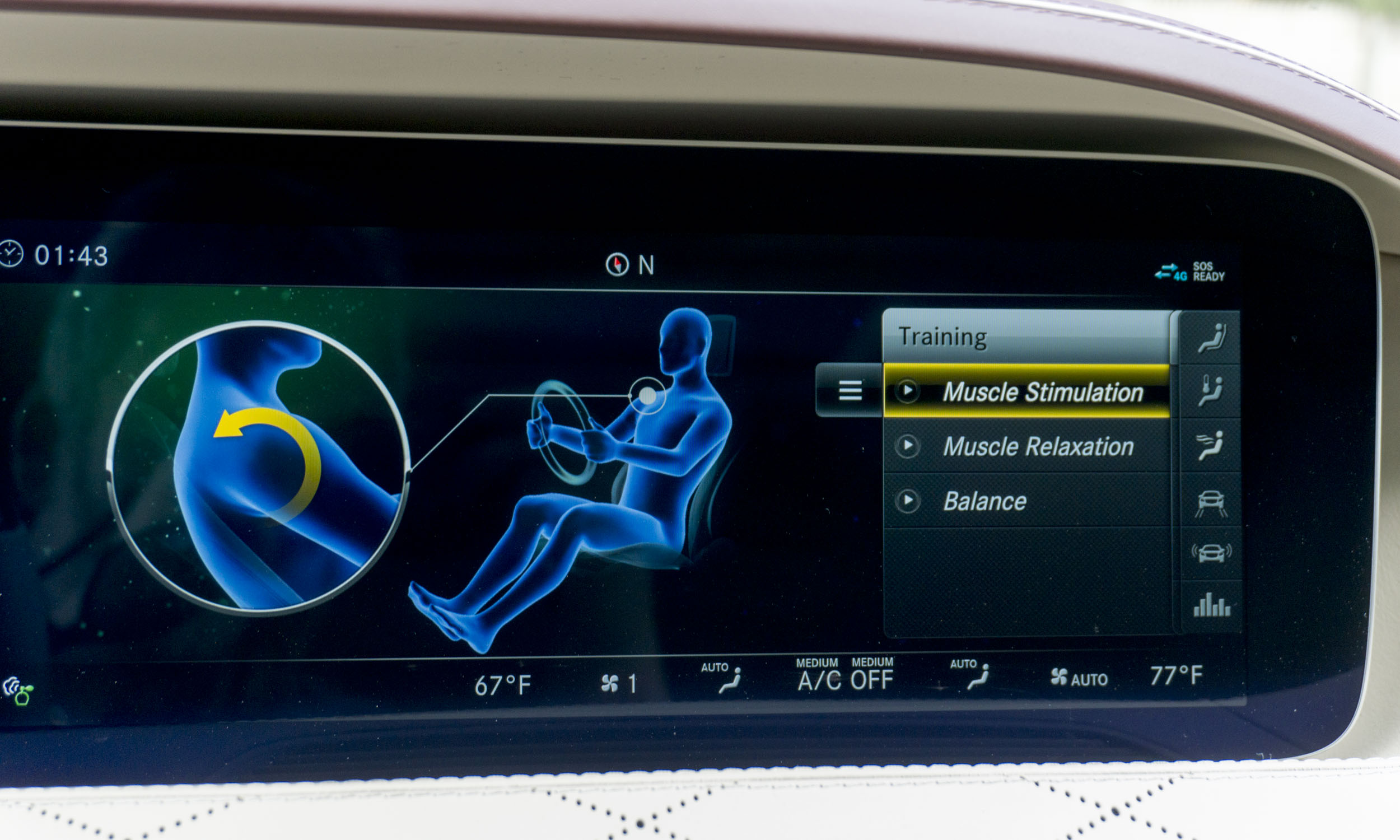 Exercise Behind the Wheel
One of the 10-minute programs — called Training — features a choice of Muscle Stimulation, Muscle Relaxation and Balance. Directions to a series of stretching exercises appears onscreen and audibly, all designed to reduce driving fatigue. Granted it’s no replacement for a session at the gym, but it would be a great way to break up a long road trip. 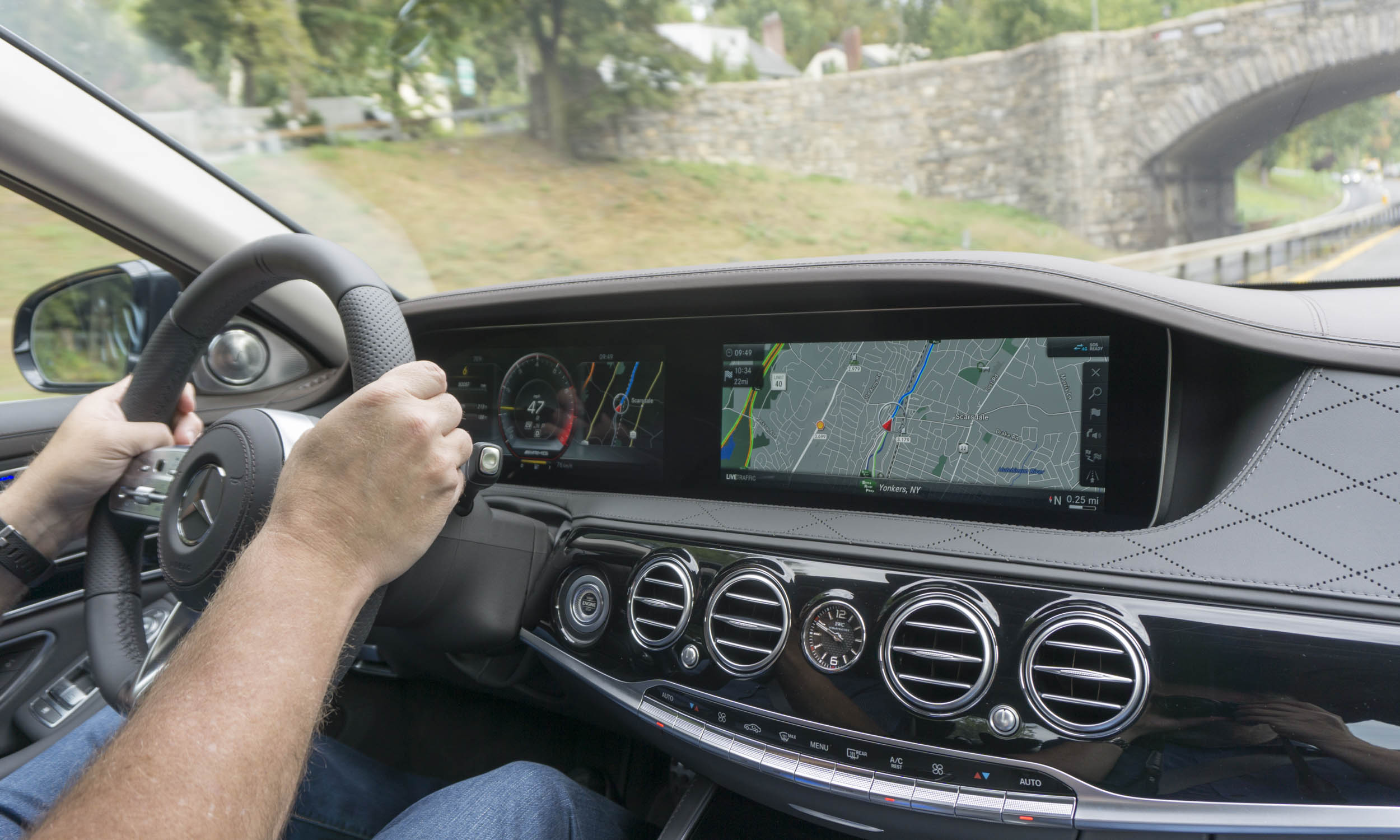 On the Road
The experience of driving or riding in an S-Class is on a different level than practically any other vehicle on the road. Everything is smooth and sublime — it’s easy to shut out the rest of the world and remain ensconced in the luxurious S-Class cabin. We had the opportunity to spend time behind the wheel of S-Class models ranging from the base-level S450 to the mighty AMG S65, and all are impressive for what they are. 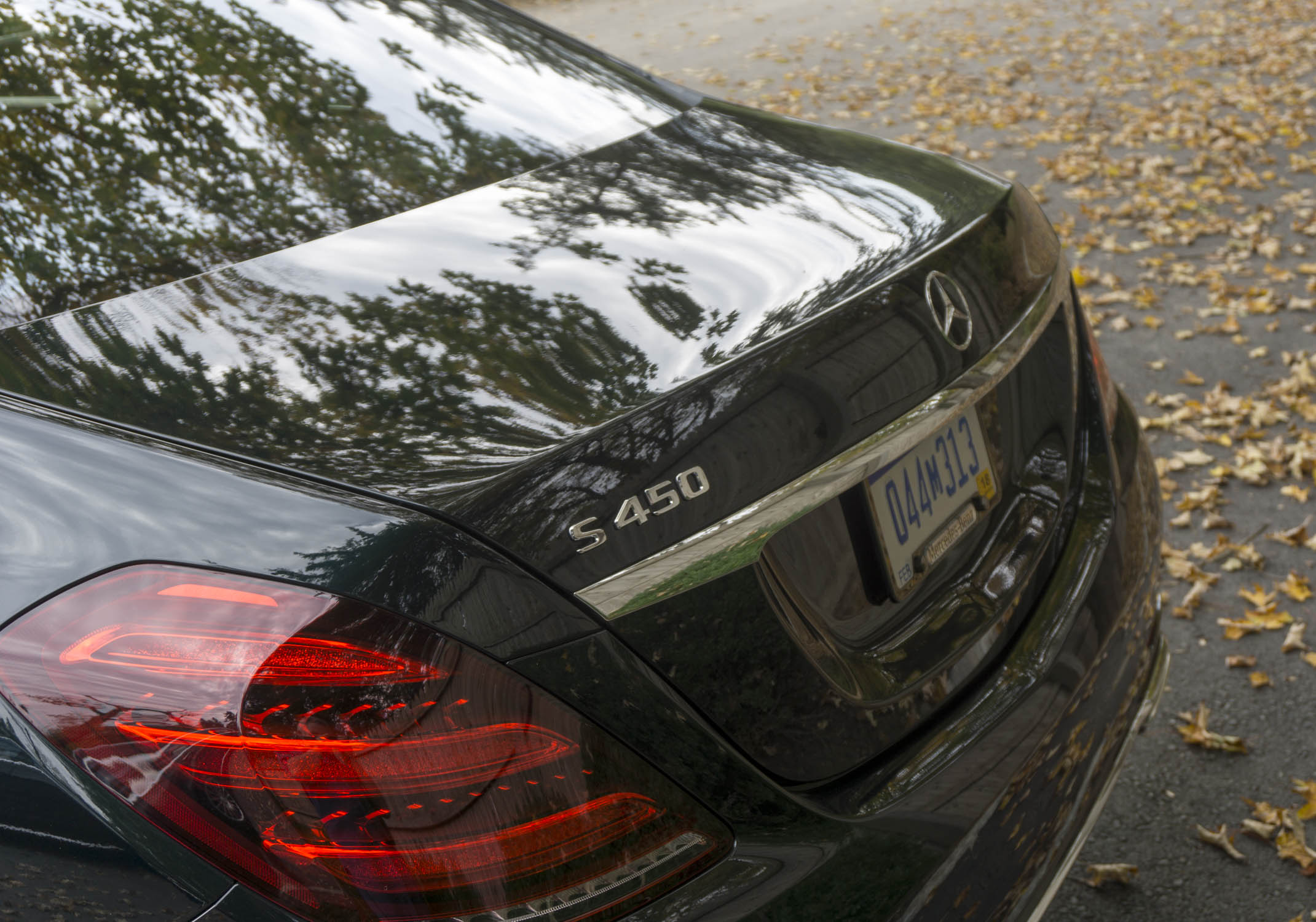 V6 Power
The S450 might be the lowest-powered model in the S-Class lineup, but it certainly isn’t lacking for power. Its strong acceleration does not compromise any of the smooth, quiet ride expected from an S-Class. In fact, most drivers would never know this is a V6-powered sedan. And while it may be the least-expensive model in the S-Class lineup, the S450 feels just as solid and supreme as more expensive versions. 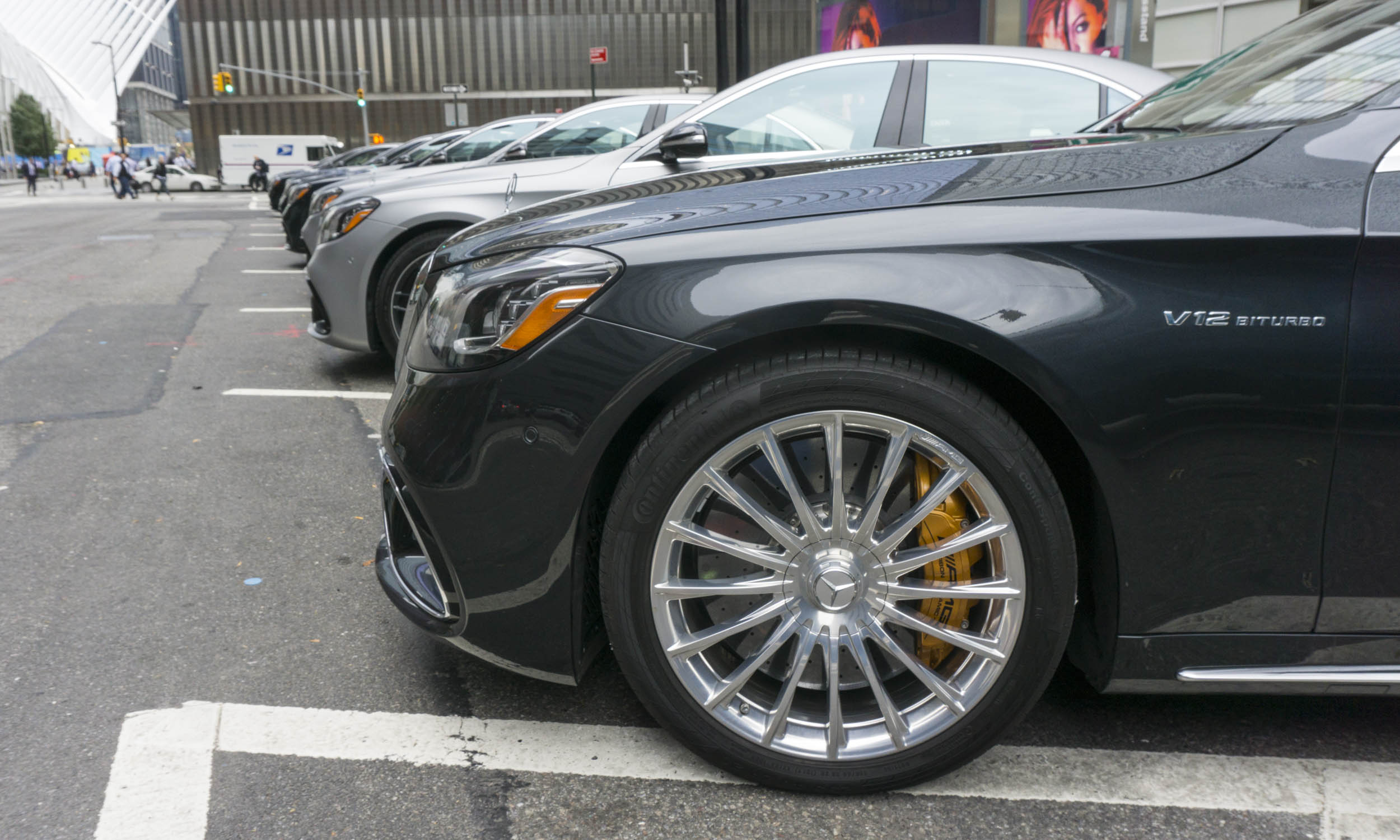 More Cylinders, More Power
As previously mentioned, most likely the main reason for purchasing an S65 is more for bragging rights than performance, although the performance is outstanding. We considered ourselves lucky to spend some time driving the rather exclusive V12-powered AMG S65. The rapid acceleration for a vehicle of its proportions seems to defy physics, and the power comes on so smoothly that drivers are in triple digits in no time. The exhaust sounds wonderful on full throttle, followed by that satisfying “brap, brap, brap” when letting off the gas. 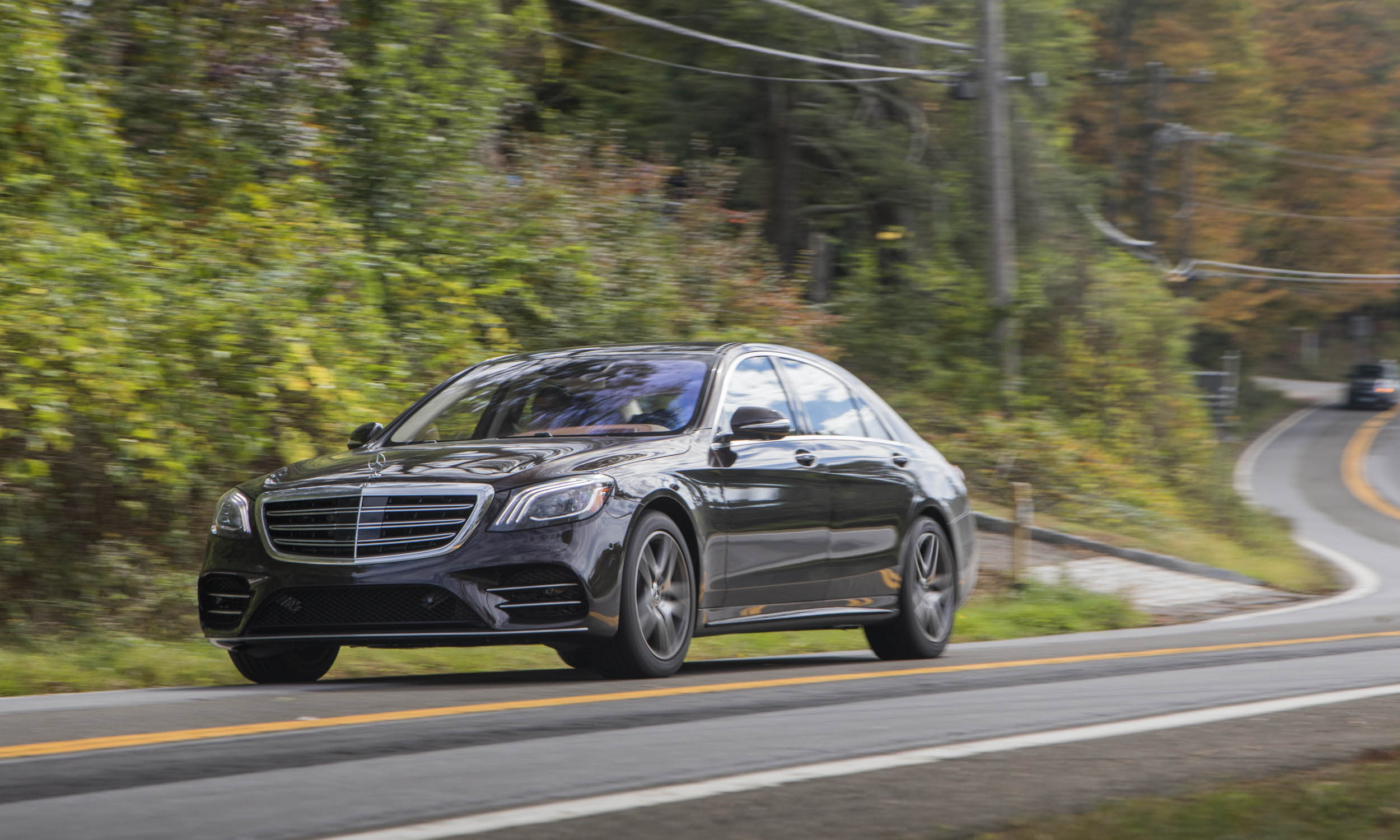 Smooth Performance
The ride in any of these S-Class models is extremely quiet and smooth, yet drivers always remain connected to the road. The S-Class possesses excellent steering feedback, and although these aren’t pure sports cars, they handle surprisingly well for such large sedans, thanks to an air suspension system that makes the ride more comfortable or — in the case of the AMG variants — adds to the performance. 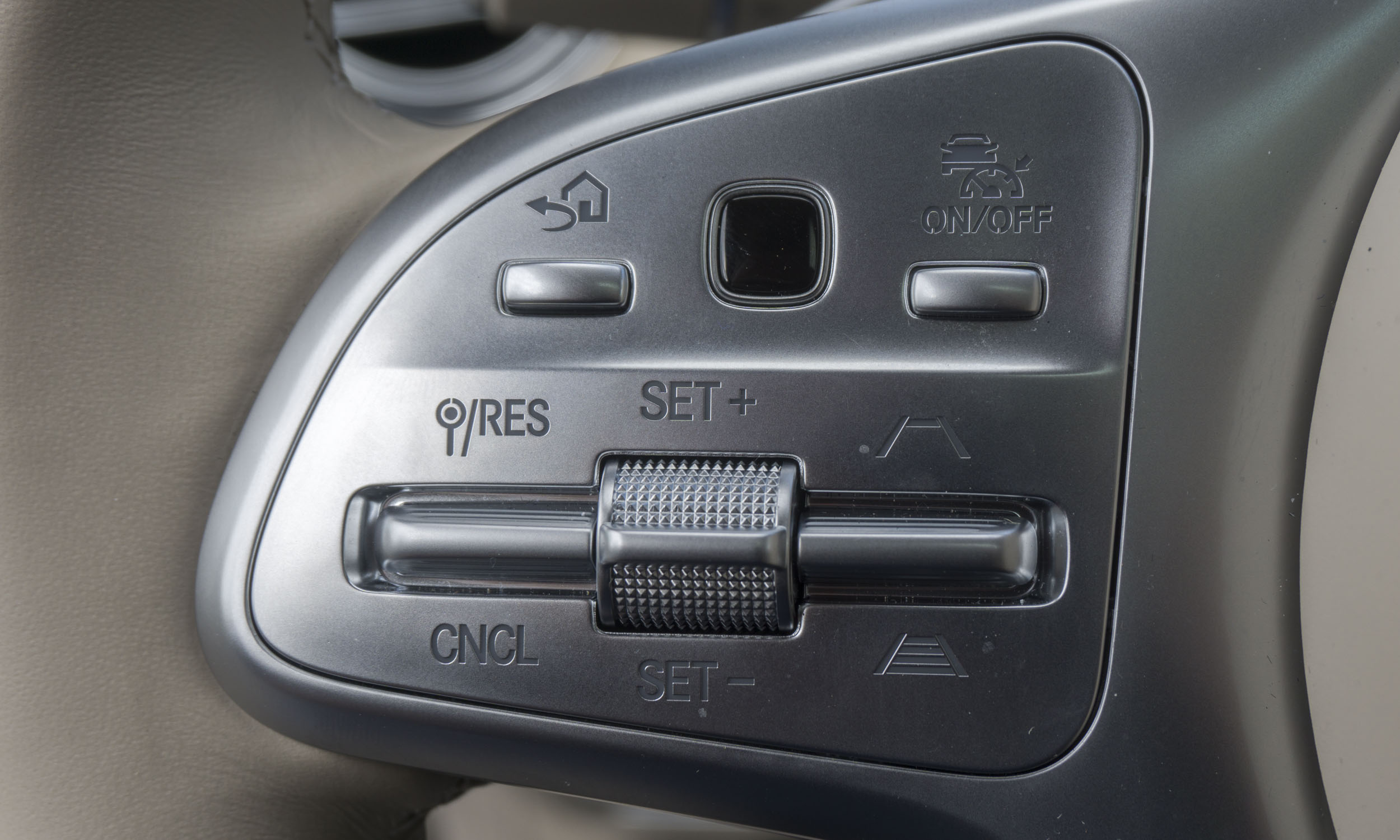 Almost Autonomous
Mercedes offers many high-tech features that practically allow the S-Class to drive itself in certain situations for short amounts of time. Active Distance Assist DISTRONIC adaptive cruise control uses radar to match the speed of the vehicle in front and can bring the S-Class to a complete stop as necessary. Active Steering Assist monitors lane markets and other vehicles to keep the car in the center of a lane, even handling slight curves on its own. There’s even Active Lane Change Assist: When travelling on a multi-lane freeway, activating the turn signal will allow the vehicle to check for space, then change lanes on its own when safe. Note that the driver will be alerted if there are no hands detected on the steering wheel after about 15 seconds. 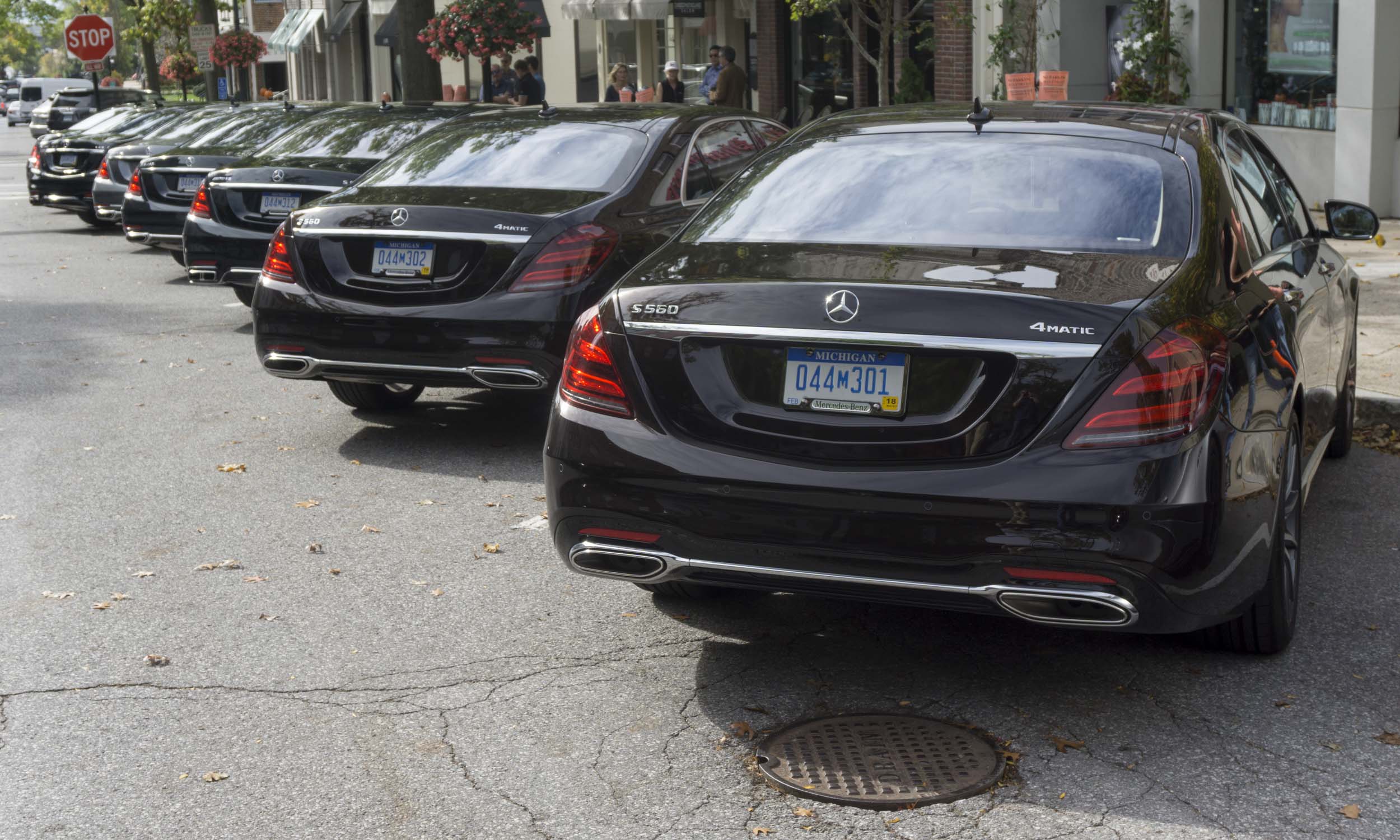 Right for You?
The list of luxury sedans in the $100,000-plus market is not very long, but the S-Class continues to define what a luxury sedan should be. With a range that includes the ultra-luxurious Maybach and the extreme-performance AMG models, the S-Class exceeds expectations, whether from behind the wheel or in the back seat. For years the S-Class has set the bar for luxury, and this latest version has moved that bar up a few notches. 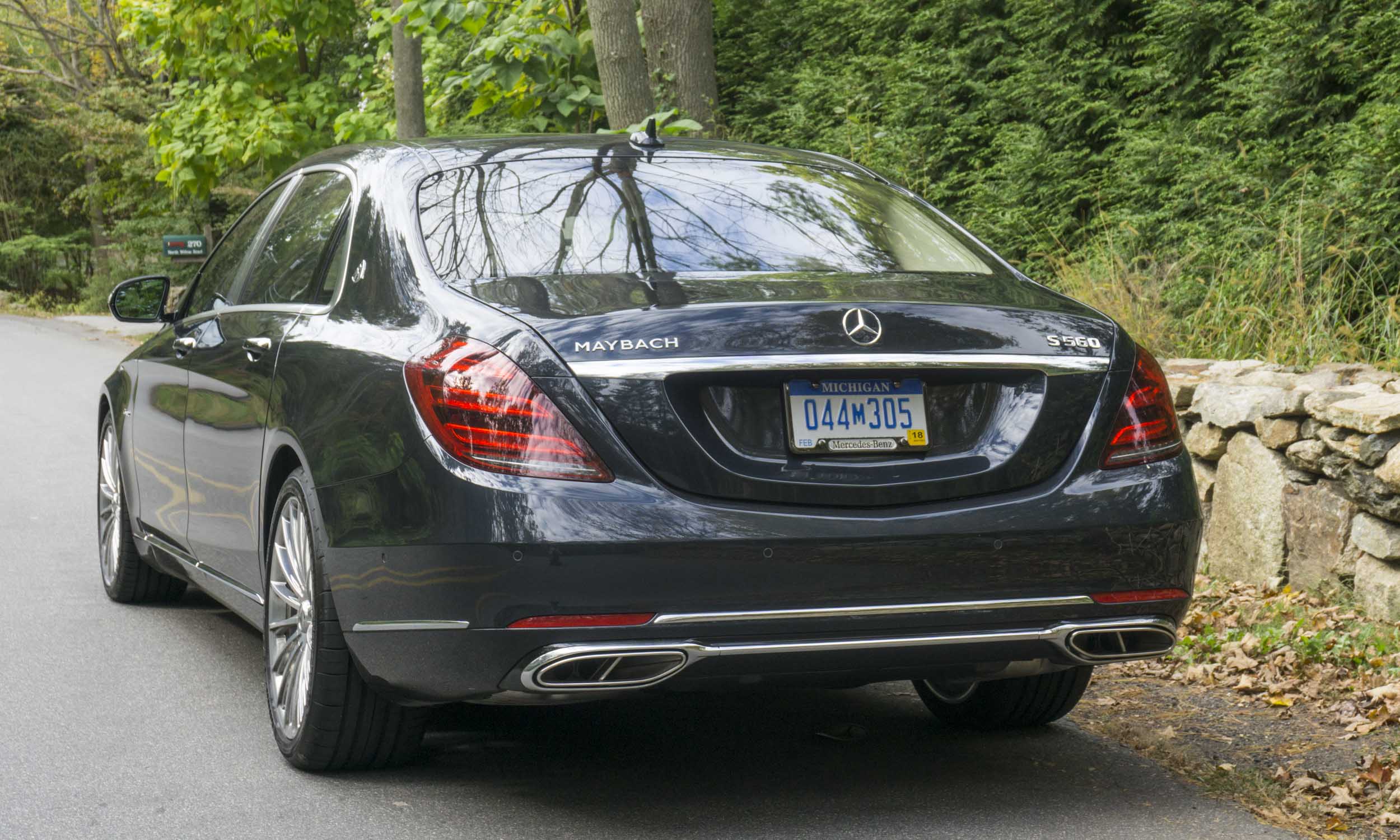