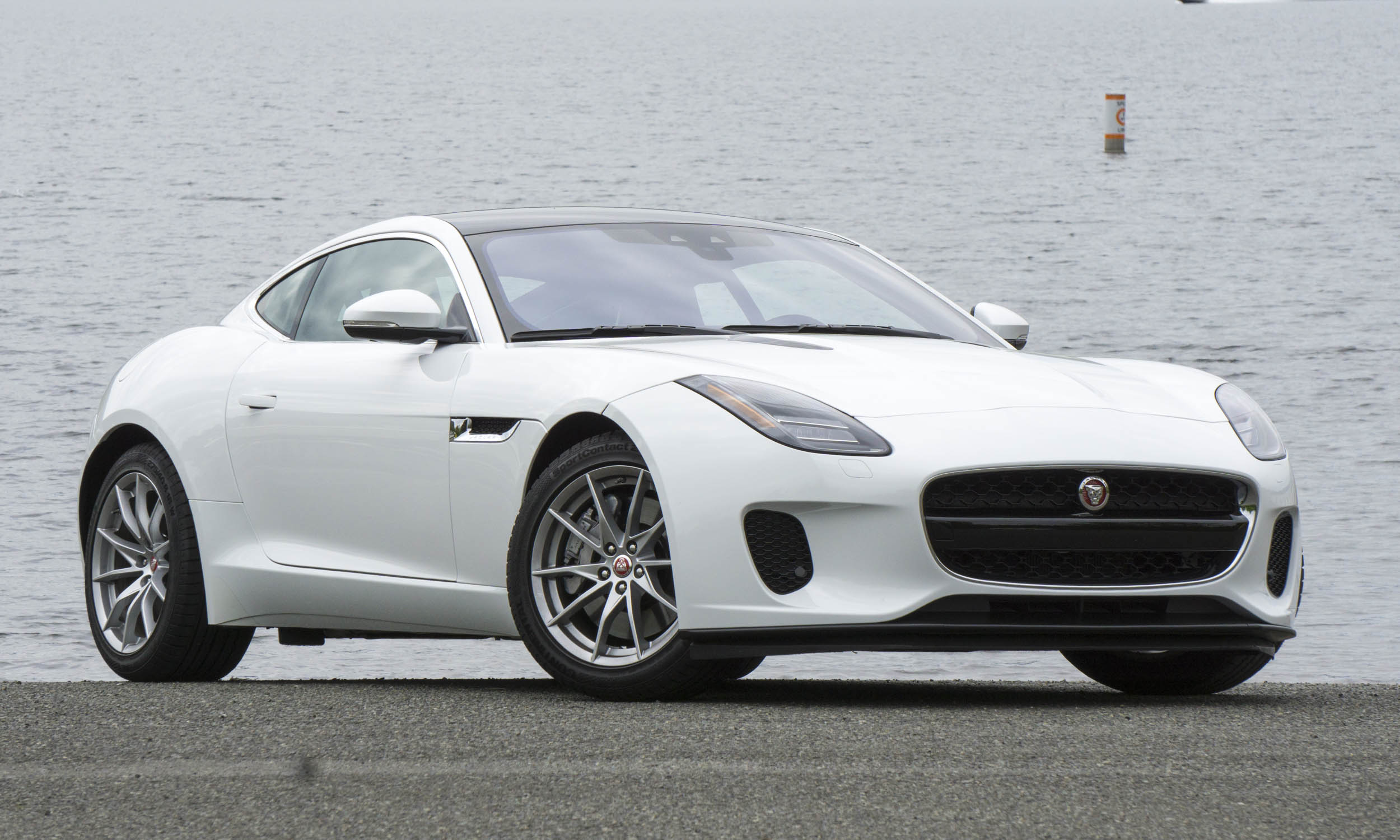 No Need for a V8
There’s no denying it — the Jaguar F-TYPE is one of the sexiest-looking sports cars on the road. With its long hood, raked windshield and swept-back roofline, this Jag continues to turn heads, even though the current generation has been around since 2014. But does it need to possess a powerful V6 or massive V8 under the hood to be a proper jungle cat? After spending a few days with the turbocharged 4-cylinder F-TYPE, the answer is a resounding no. 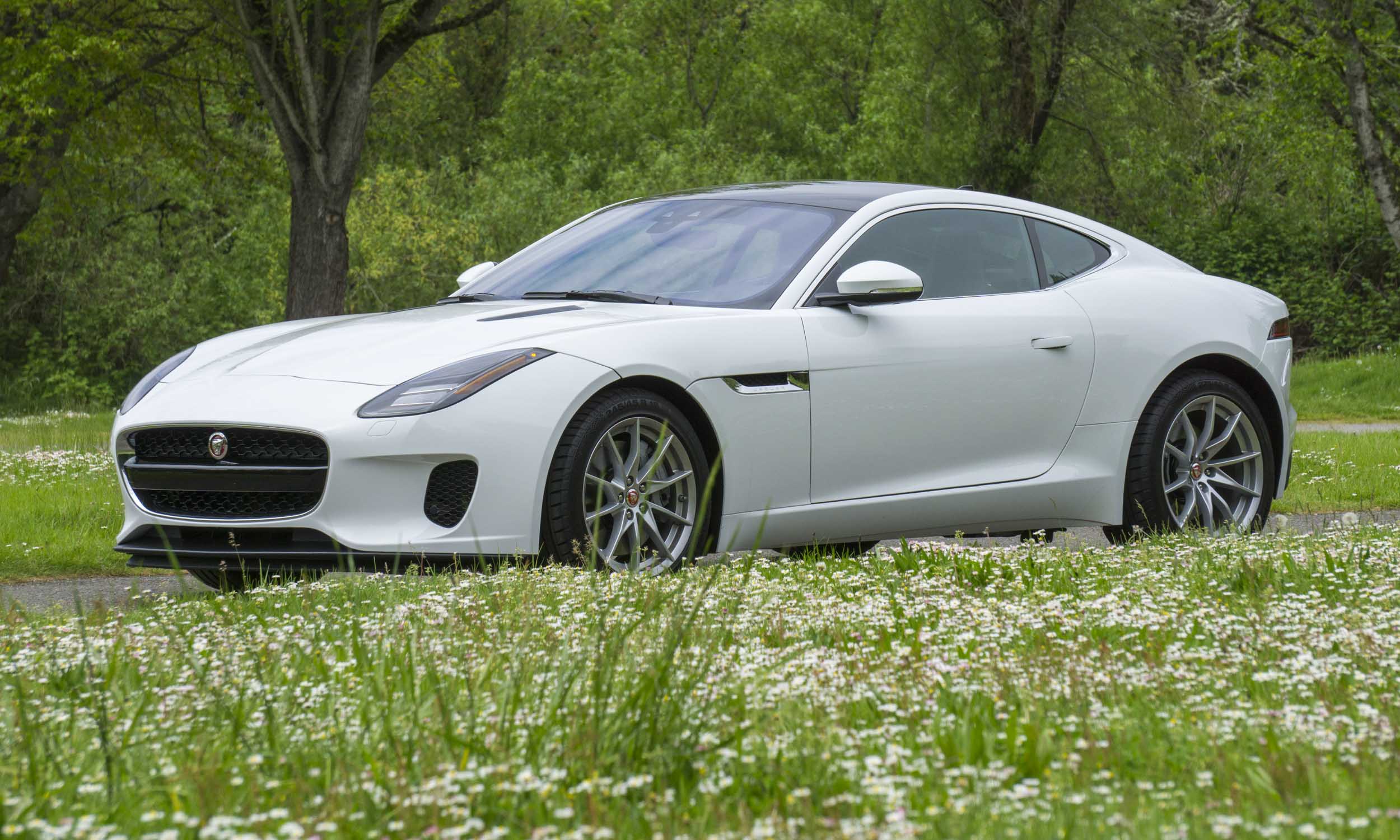 Test Vehicle
Our test vehicle was the most basic version of the 2018 Jaguar F-TYPE available in the U.S., which has a base price of $59,900 (excluding destination charge). The 4-cylinder version of the F-TYPE that we drove also had dual-zone climate control, a fixed panoramic roof, a power tailgate, keyless entry and a few other items for a total MSRP of $65,663 (including destination charge). Competitors to the F-TYPE turbo include the Audi TT, Infiniti Q60, Mercedes-Benz SLC, BMW 4 Series and Porsche 718. 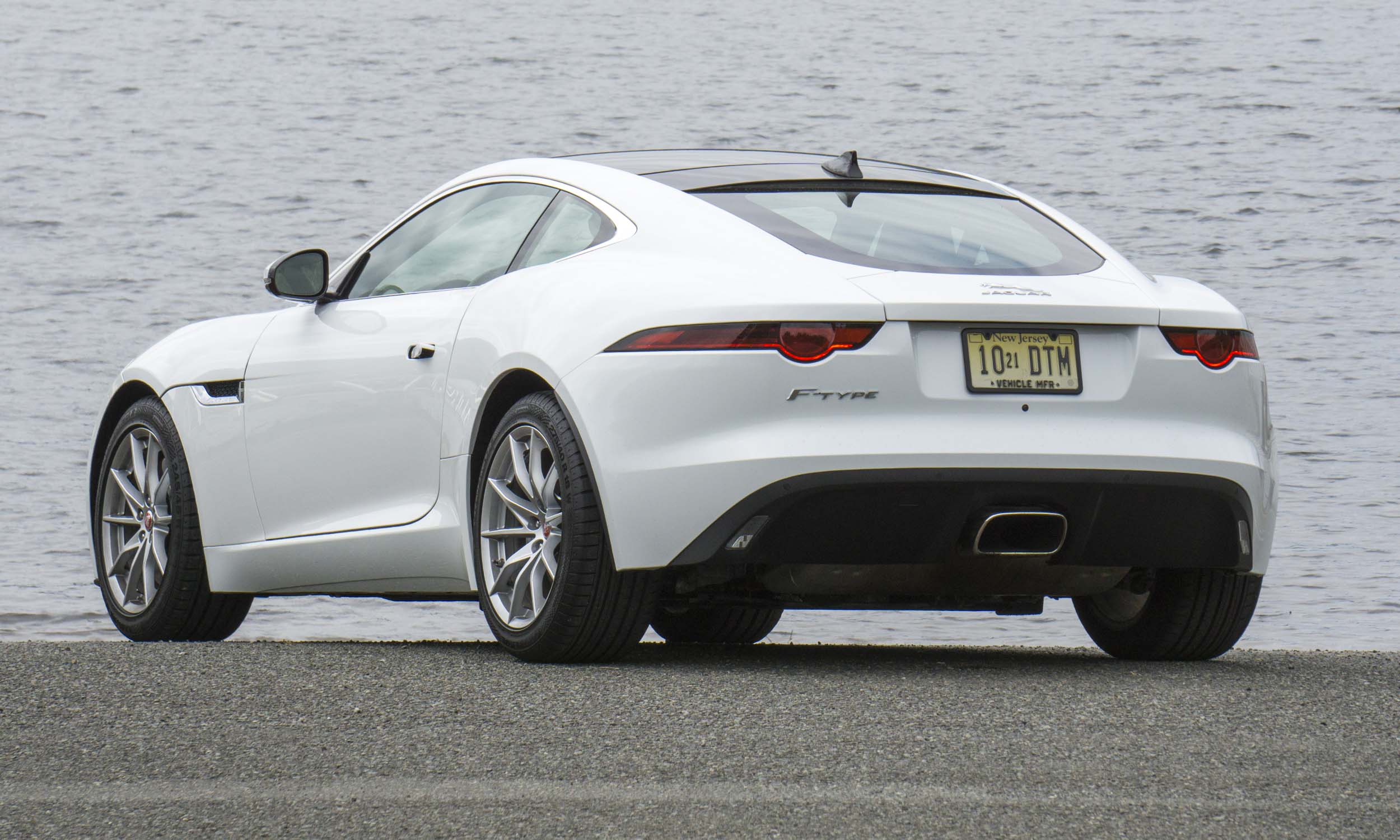 Entry Level
With an MSRP starting below $60,000, the F-TYPE is now within reach of more consumers who desire this sexy coupe but don’t want to pay a higher price of entry. At first blush it would seem that putting a 4-cylinder engine in a Jaguar F-TYPE would simply be wrong. This is a vehicle typically equipped with either a high-performance supercharged V6 or a roaring V8 generating as much as 575 horsepower in the SVR version. But, as it turns out, the 4-banger works quite well. 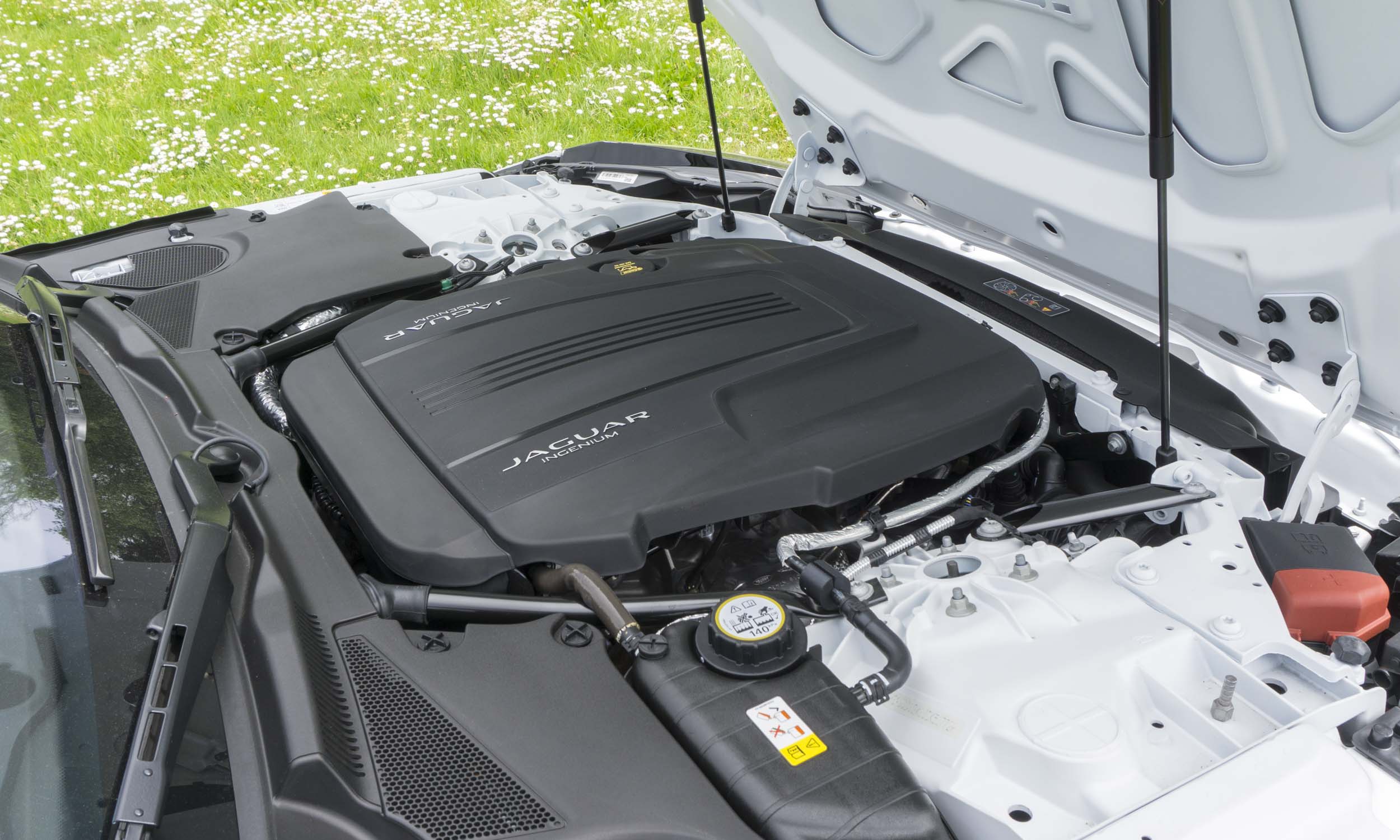 Turbo Engine
The motive power in question is a 2.0-liter Ingenium turbocharged 4-cylinder engine that produces 296 horsepower. More importantly, it generates 295 lb-ft of torque at a mere 1500 rpm, so acceleration is brisk. A sprint to 60 mph takes 5.4 seconds, which is certainly not slow — it’s actually one-tenth of a second faster than an F-TYPE equipped with the supercharged V6 and manual transmission. The F-TYPE turbo maximizes its low-end grunt with a quick-shifting 8-speed automatic gearbox that keeps the engine in peak torque as it climbs through the gears. 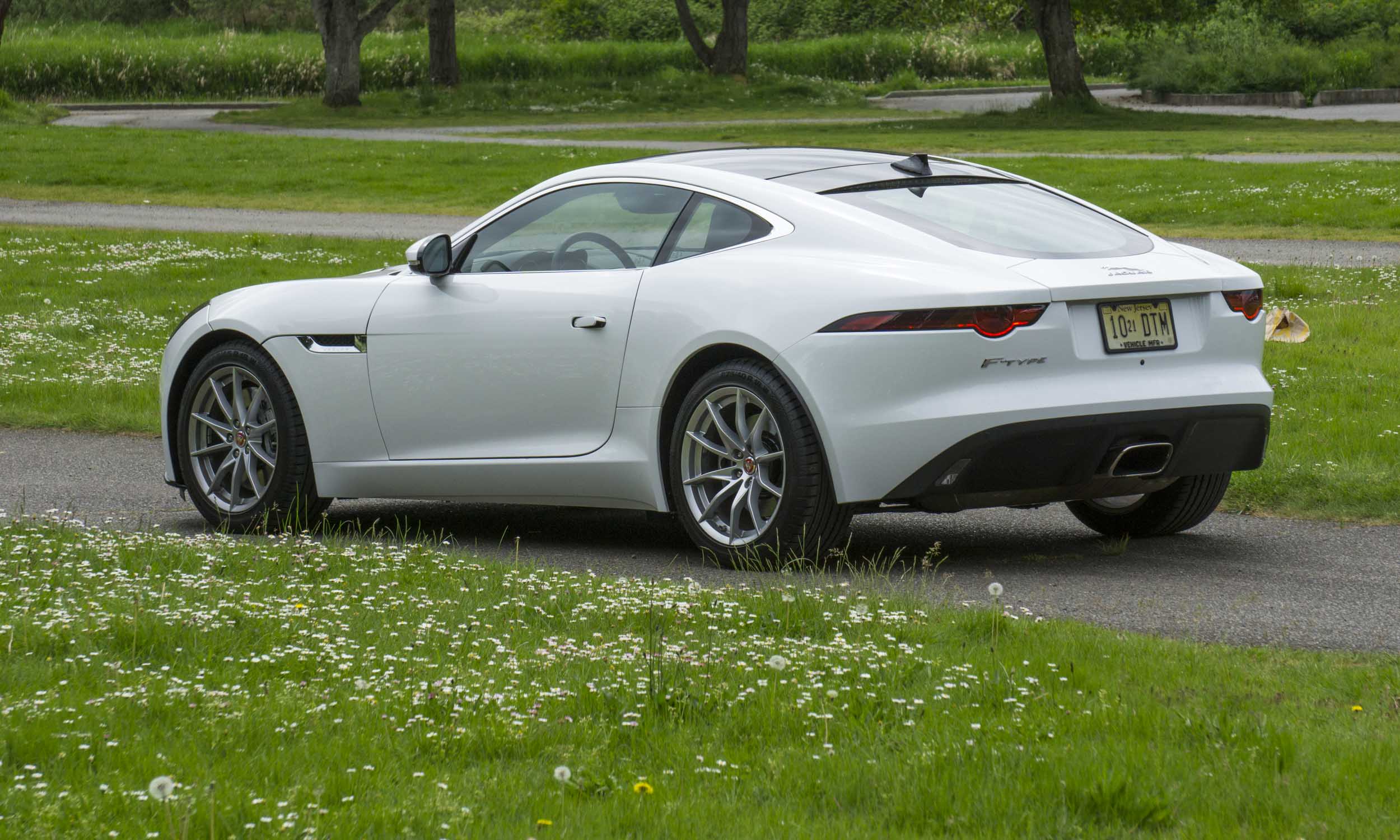 Fuel-Efficient
Another advantage of the smaller-displacement powerplant in the 2018 F-TYPE is its fuel efficiency. The turbocharged version has EPA fuel-economy ratings of 23 mpg city / 30 mpg hwy / 26 mpg combined — impressive for a fun-to-drive sport coupe. However, a smaller turbo engine combined with a heavy right foot quickly lowers the fuel economy, which is why our tester registered an average 15 mpg on the trip computer during our time with the car. 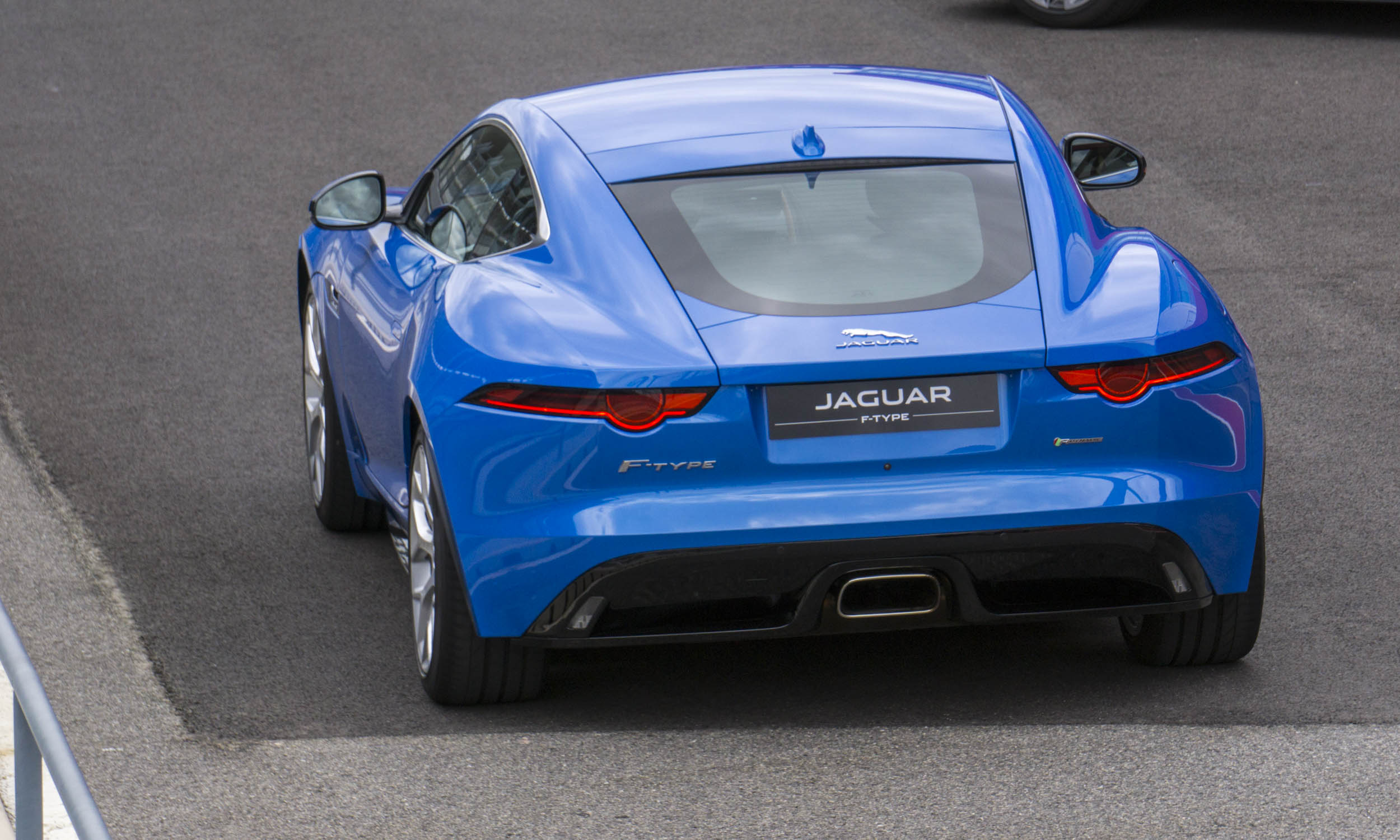 Quick and Agile
Another reason for the low fuel economy might have been our test environment. We took the Jag out on some of our favorite twisty roads which immediately produced a smile. Weighing about 450 pounds less than the V8 F-TYPE, the turbo Jag feels quick and agile. With the drive mode set to Dynamic it feels as if there are always ponies on tap — the car rarely feels underpowered.

Fun on the Track
During a recent press event for the Jaguar I-Pace, we had an opportunity to take this newest F-TYPE on track at the Algarve International Circuit in Portugal. On a racetrack the lower power output is more noticeable under full throttle on the straights, but acceleration still feels strong out of turns and handling is spot-on. 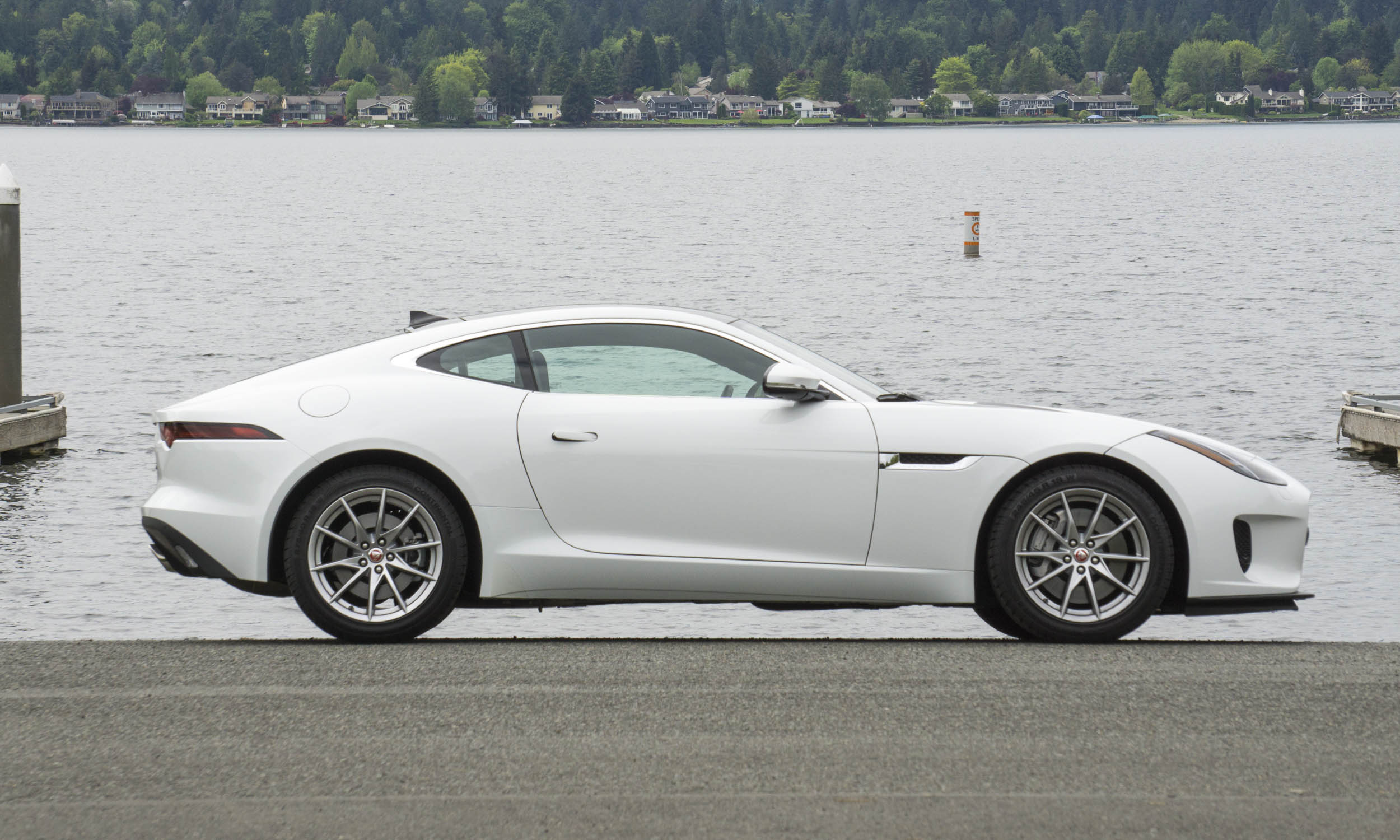 Design
In terms of styling, there are a few telltale signs that this is the base-level F-TYPE, but most folks could not discern the turbo version from larger-displacement variants. Up front are fewer air intakes and hood vents, and at the rear there’s a large central exhaust outlet. The turbo’s 18-inch alloy wheels are smaller than on other F-TYPEs, but they still look good. Overall, buyers are still getting an incredibly sexy sport coupe. 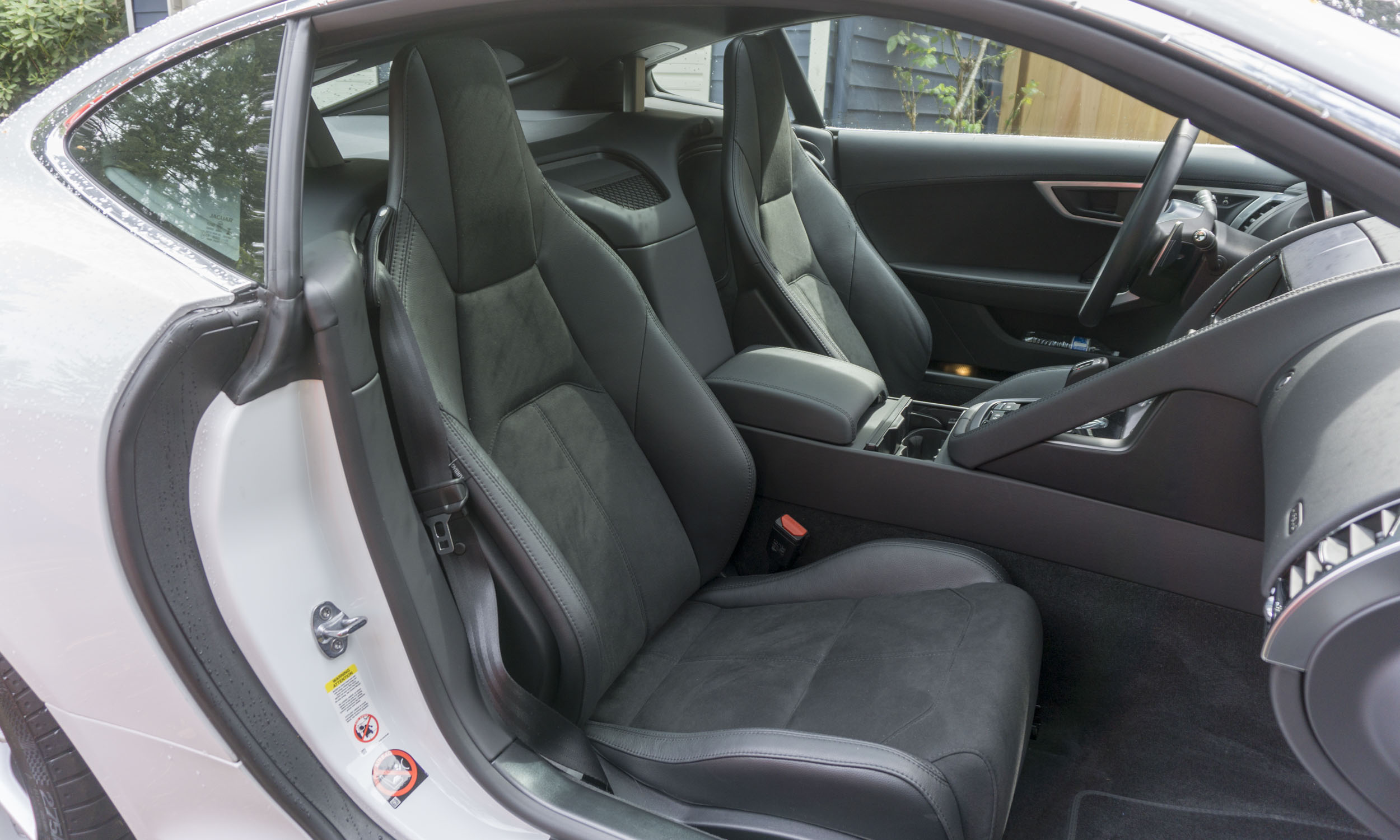 Interior
The seating surfaces of the entry F-TYPE turbo are not full leather but a mix of leather and suede, which is both comfortable and attractive. The display screen has hard buttons on either side for easier navigation, and climate controls are separate so there’s no need to dig through multiple menus to change airflow. The audio system’s volume control is in the center console but there is no tuning knob. 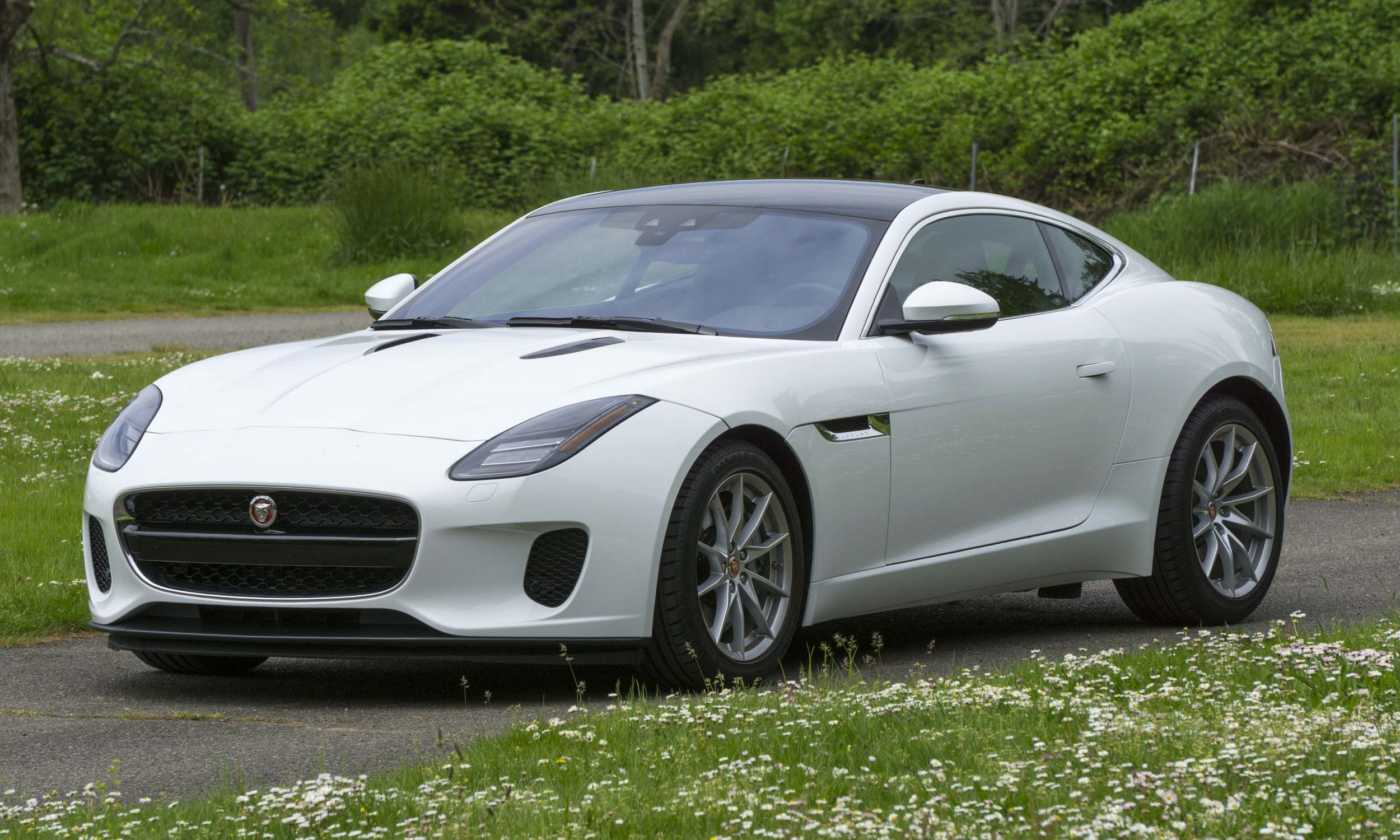 Rating: 8.5
Jaguar made a smart move creating this base-level variant in the F-TYPE lineup. With a more appealing price of entry, buyers still afford a great-looking fun-to-drive sport coupe. And for buyers who are concerned about making a statement, only those in the know will notice that this is an entry-level leaper. It remains an F-TYPE — and a fun one at that. 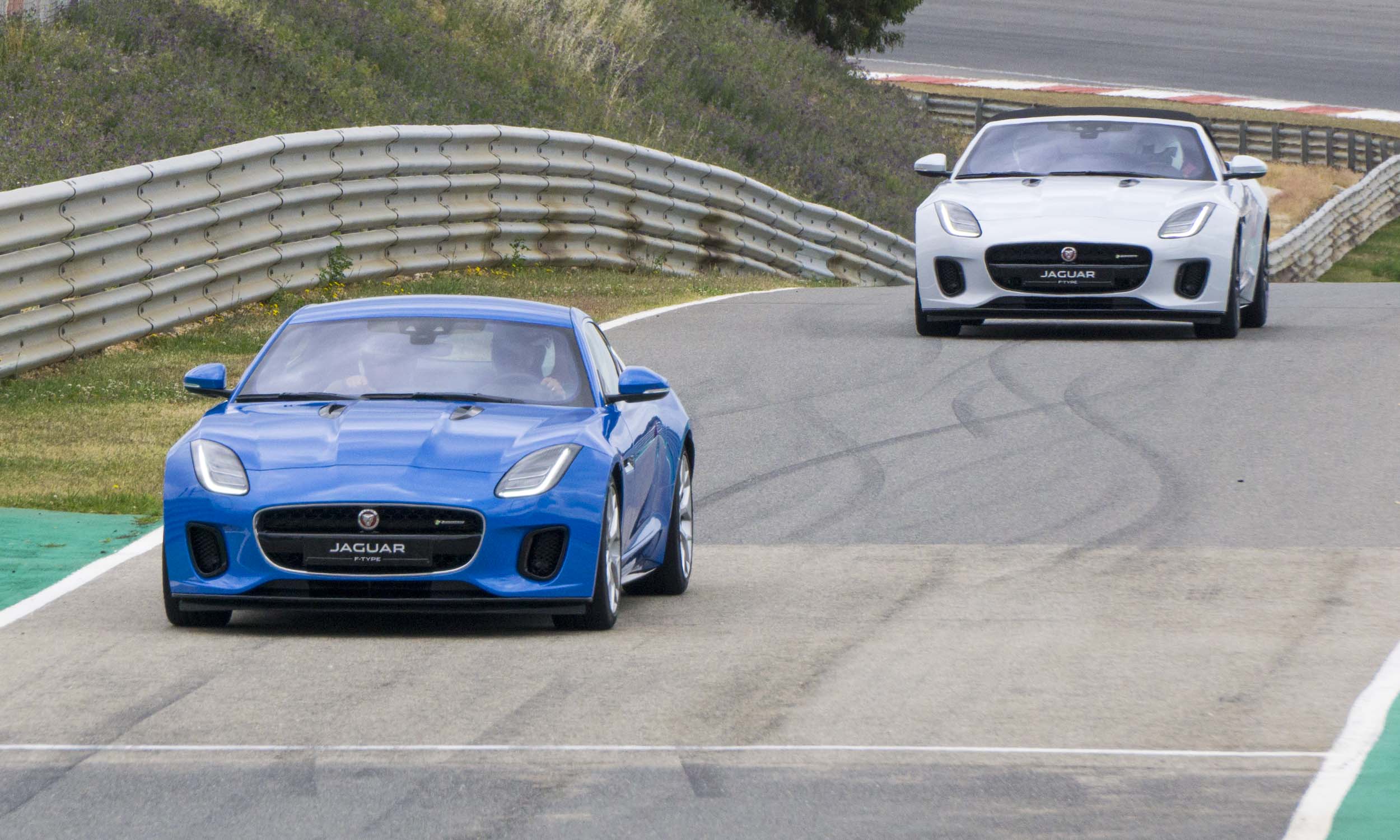 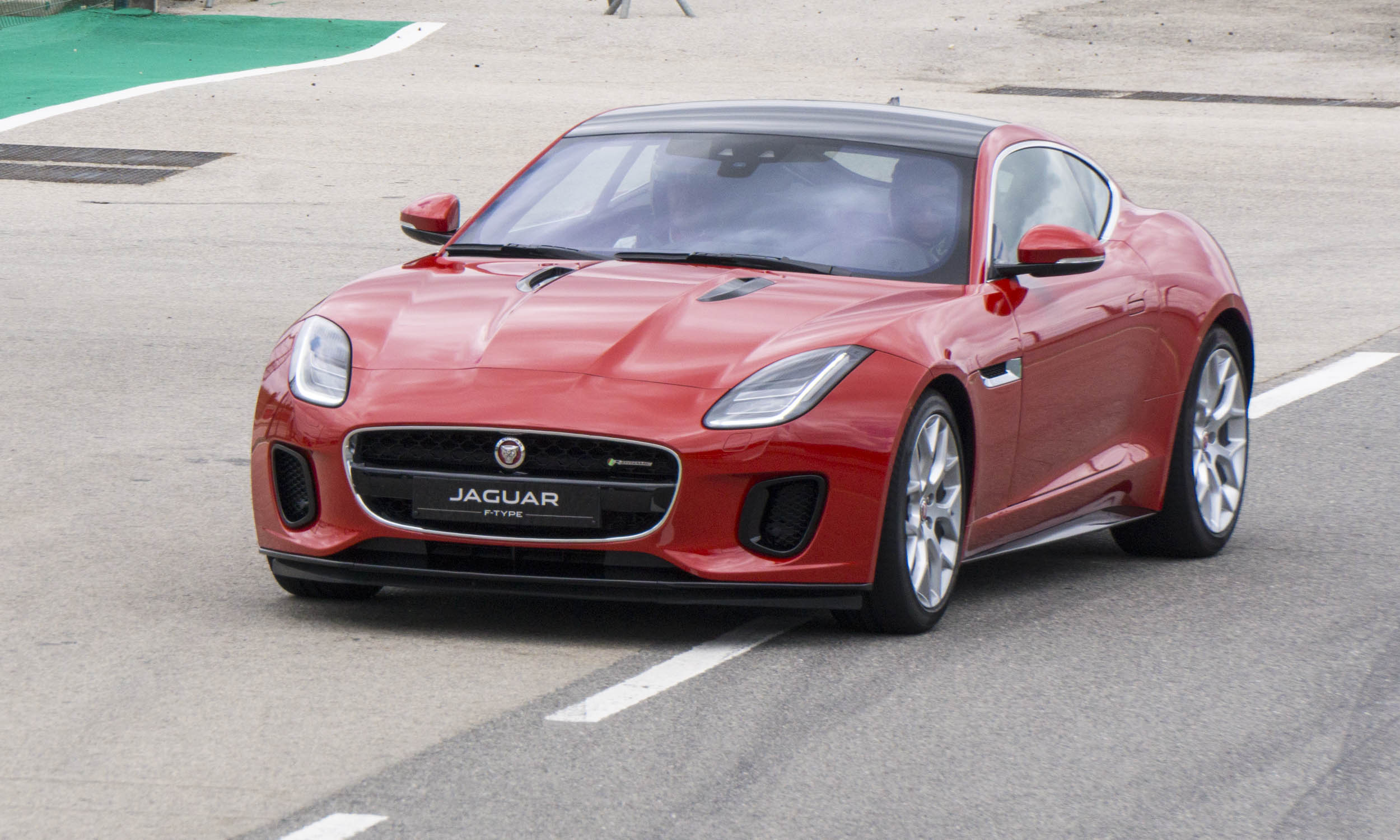 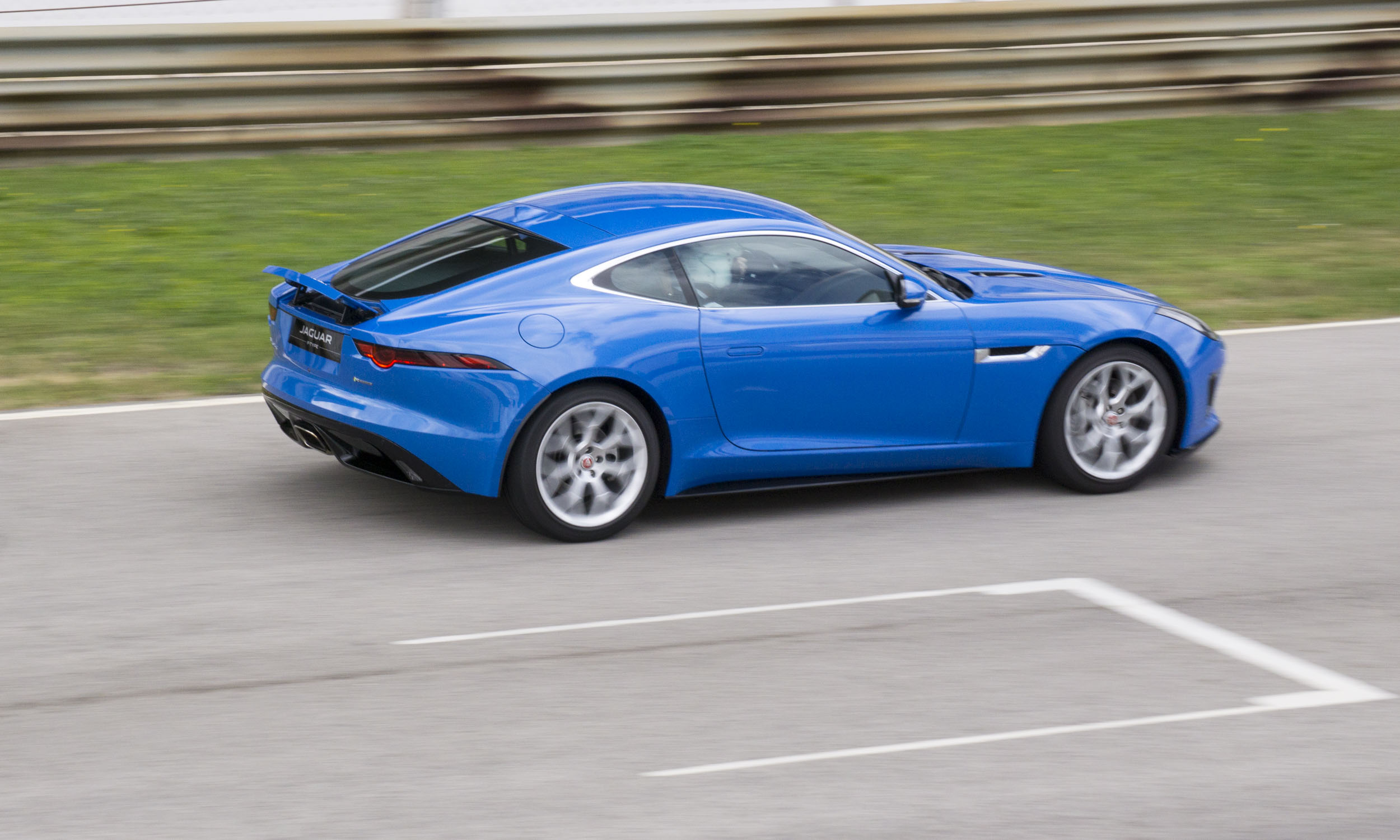 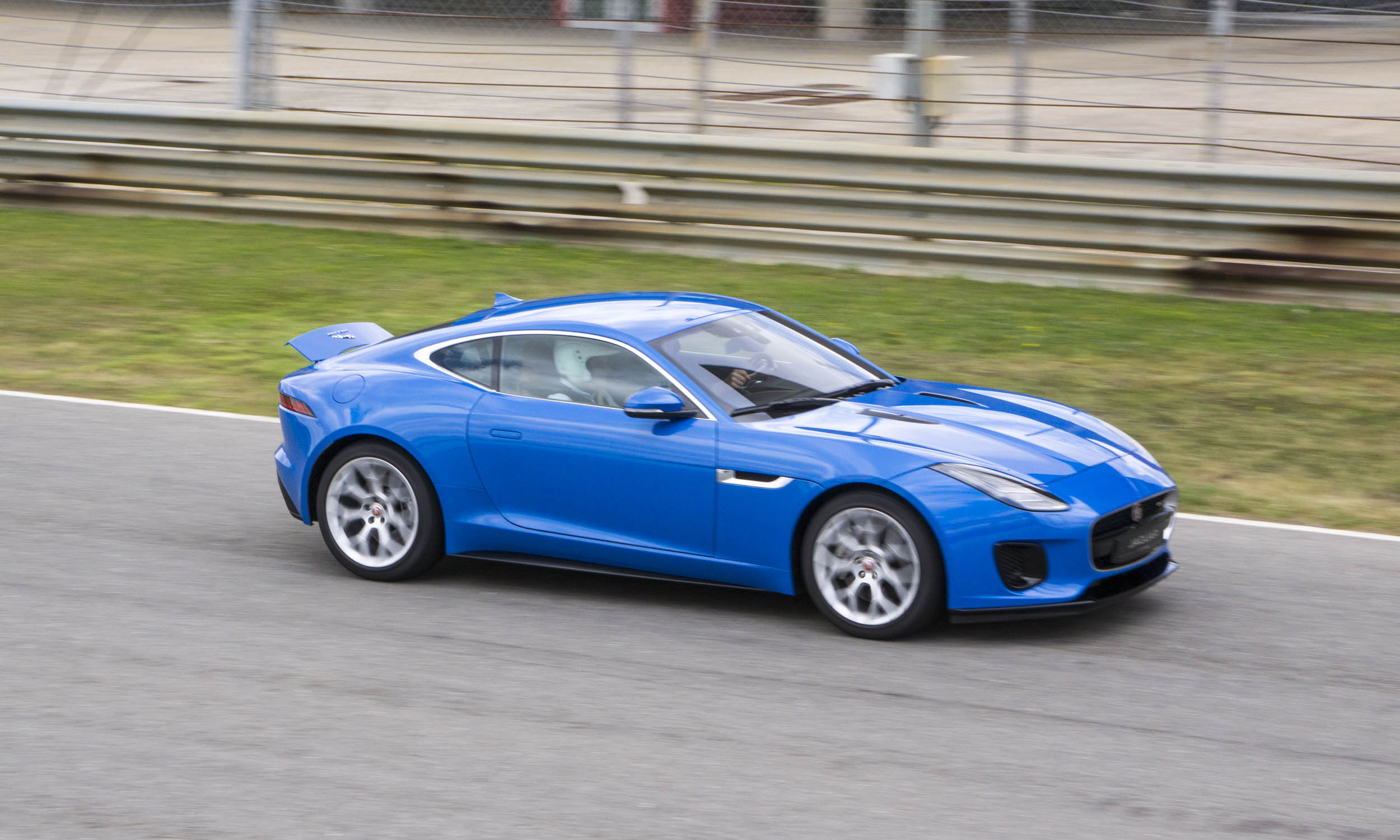 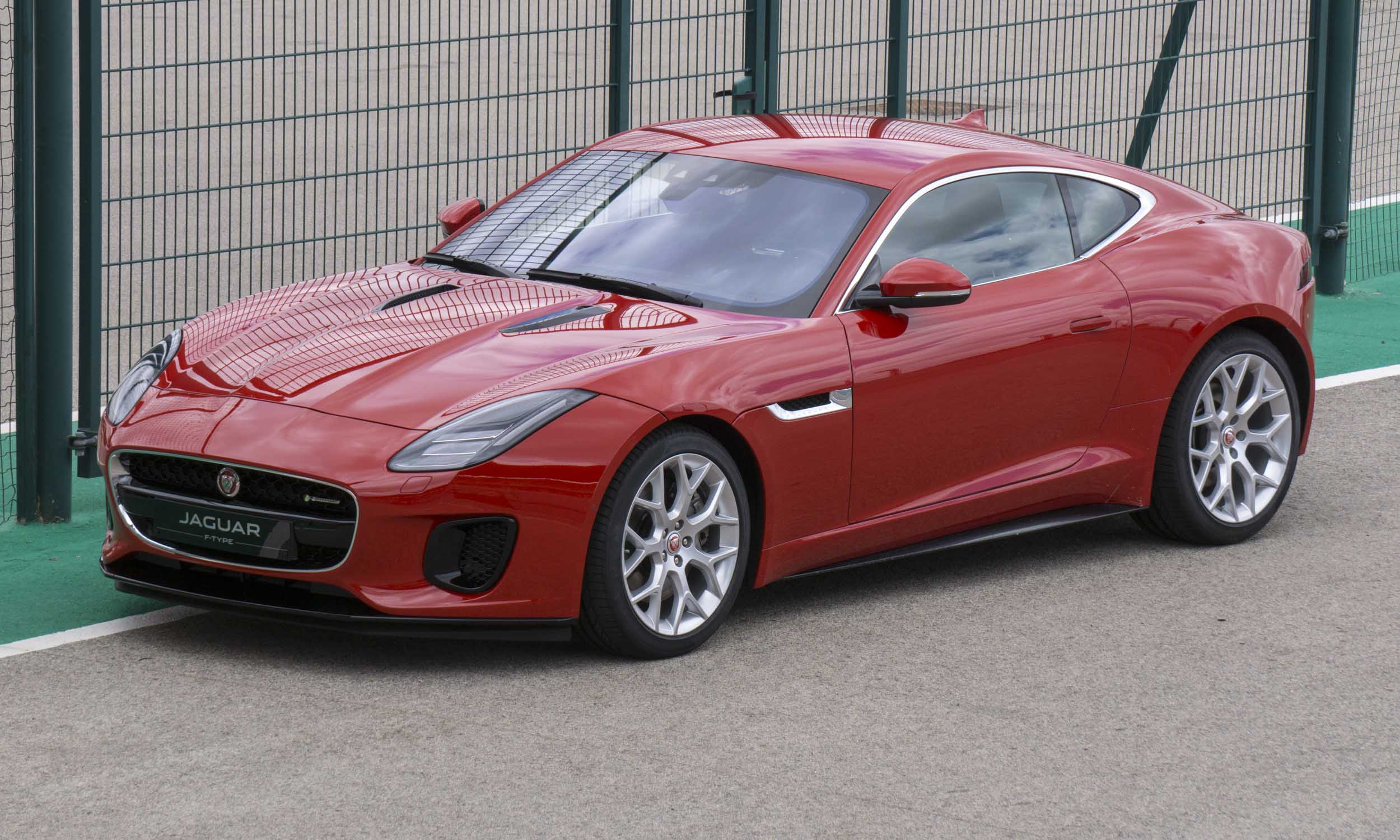 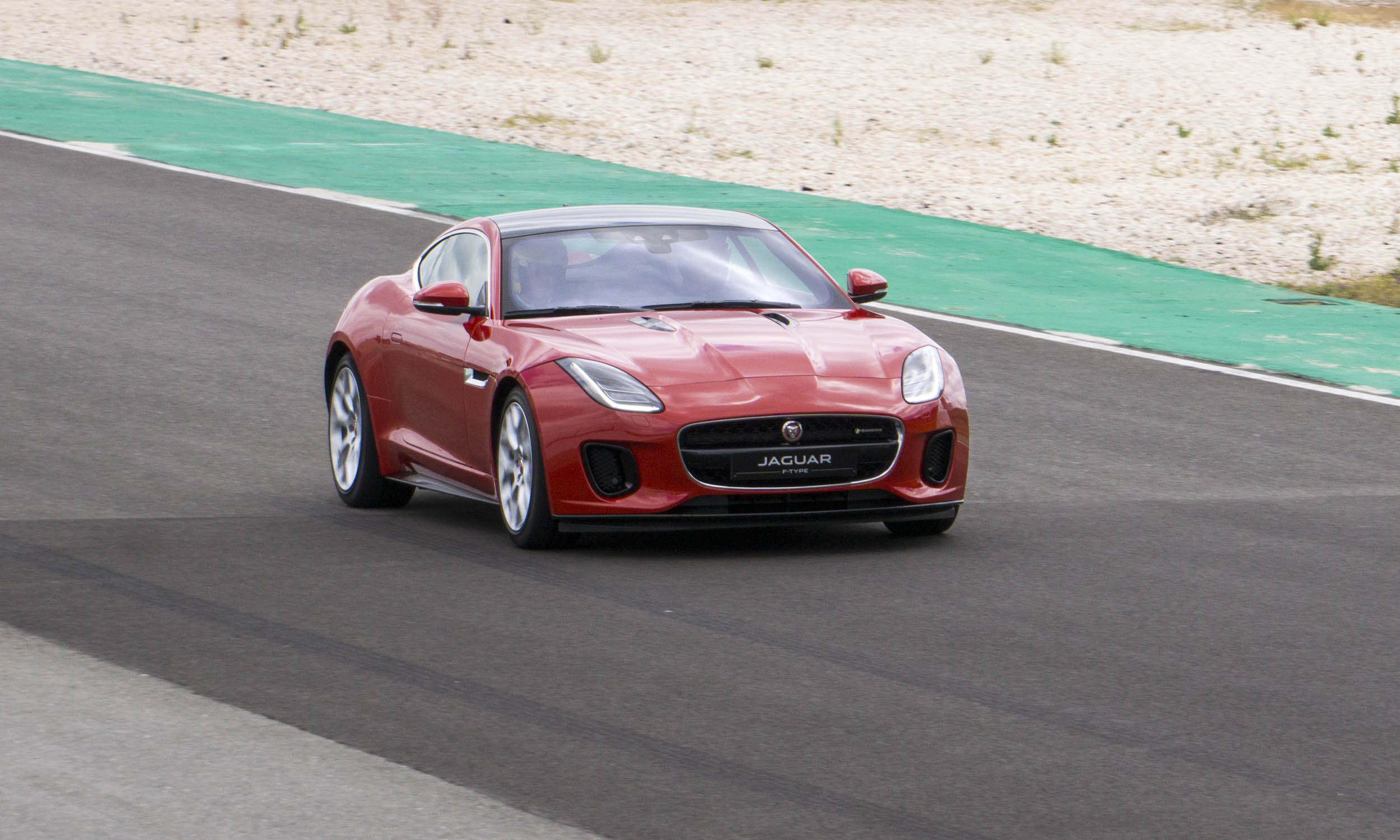 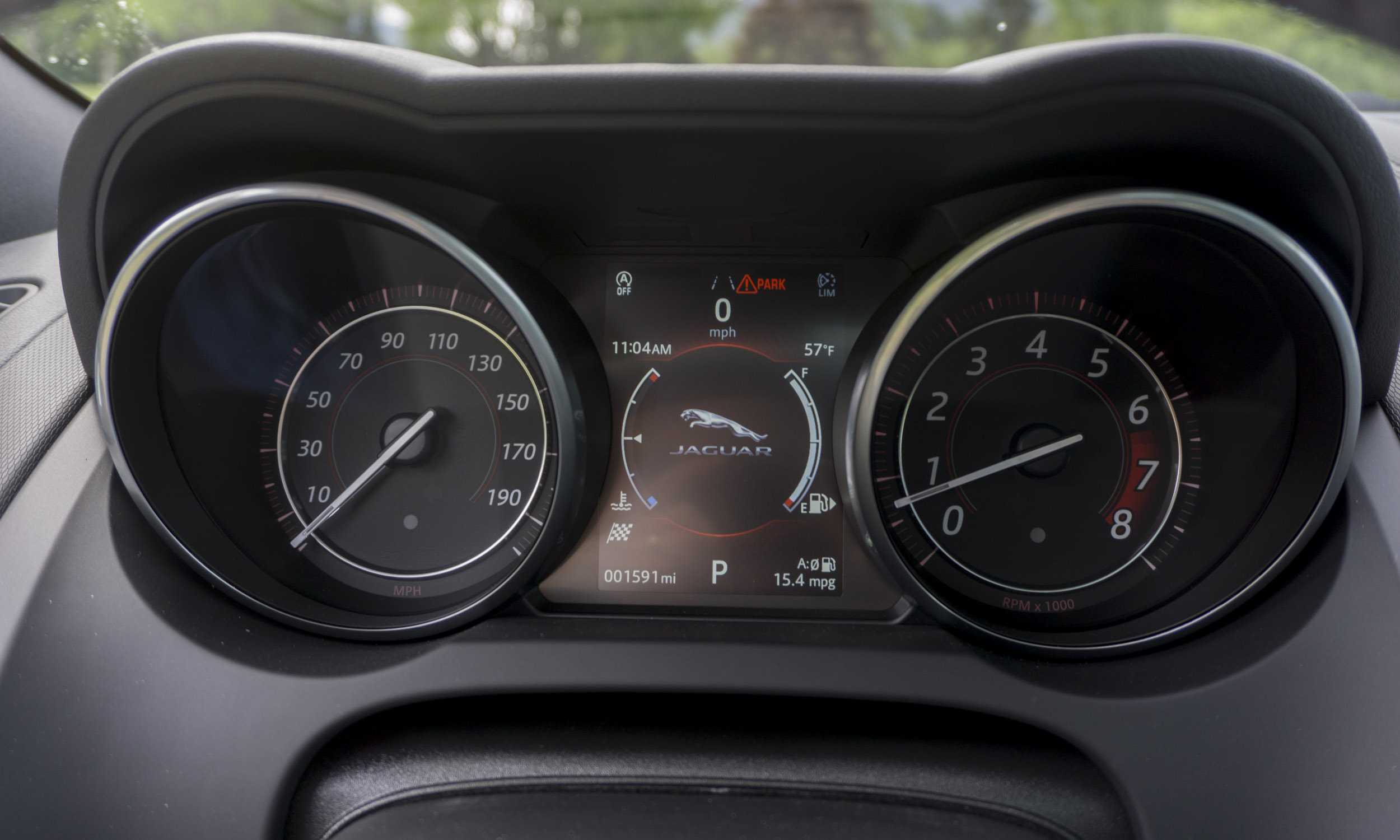 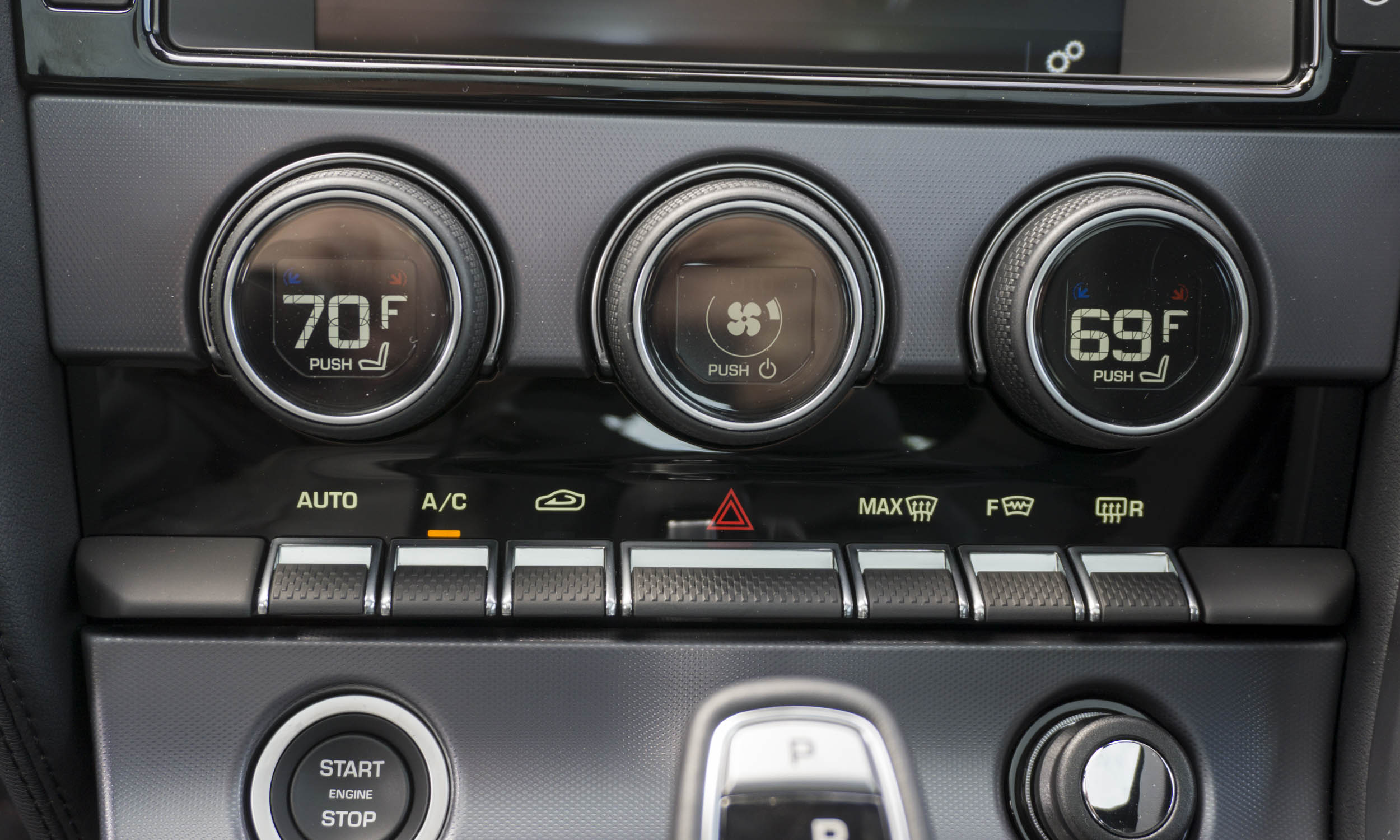 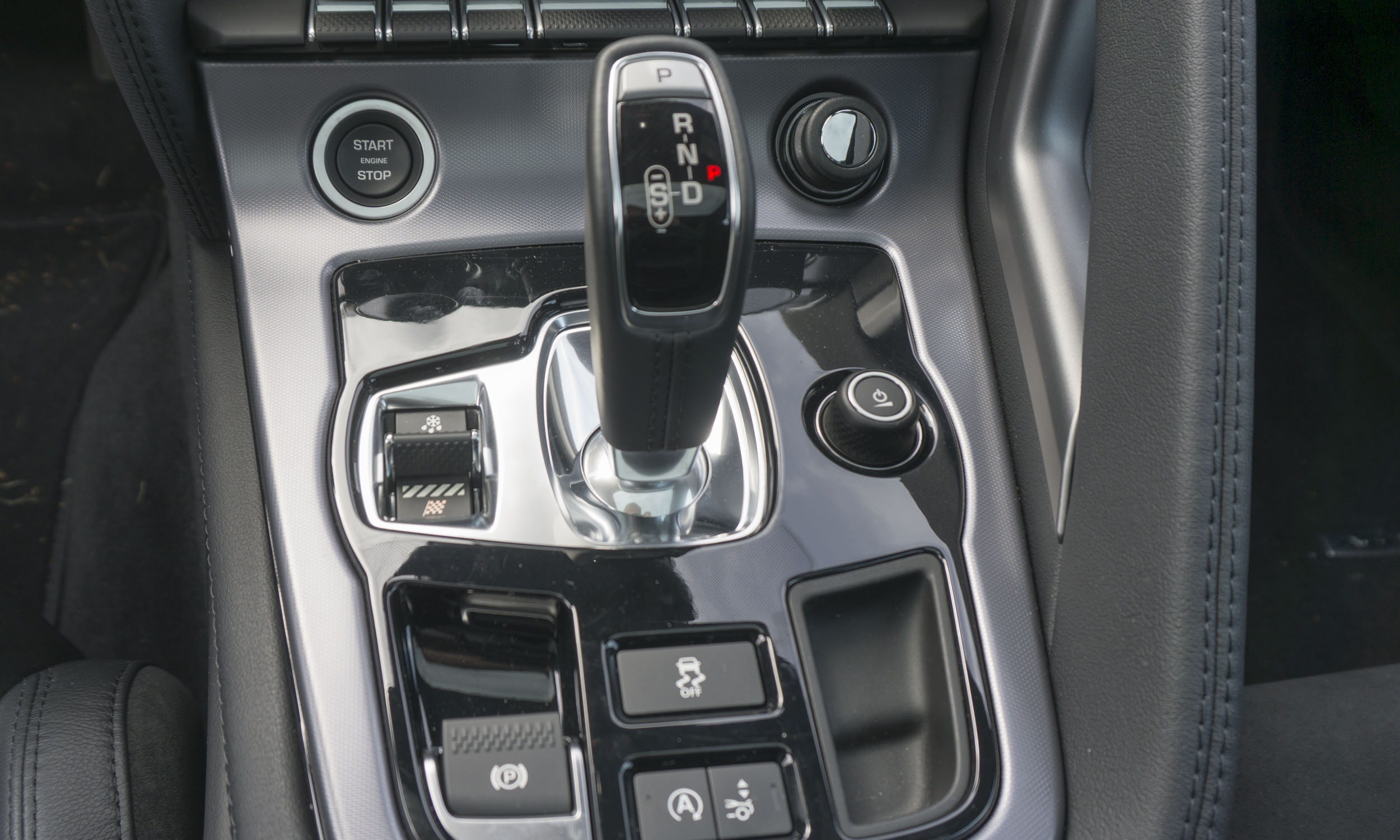 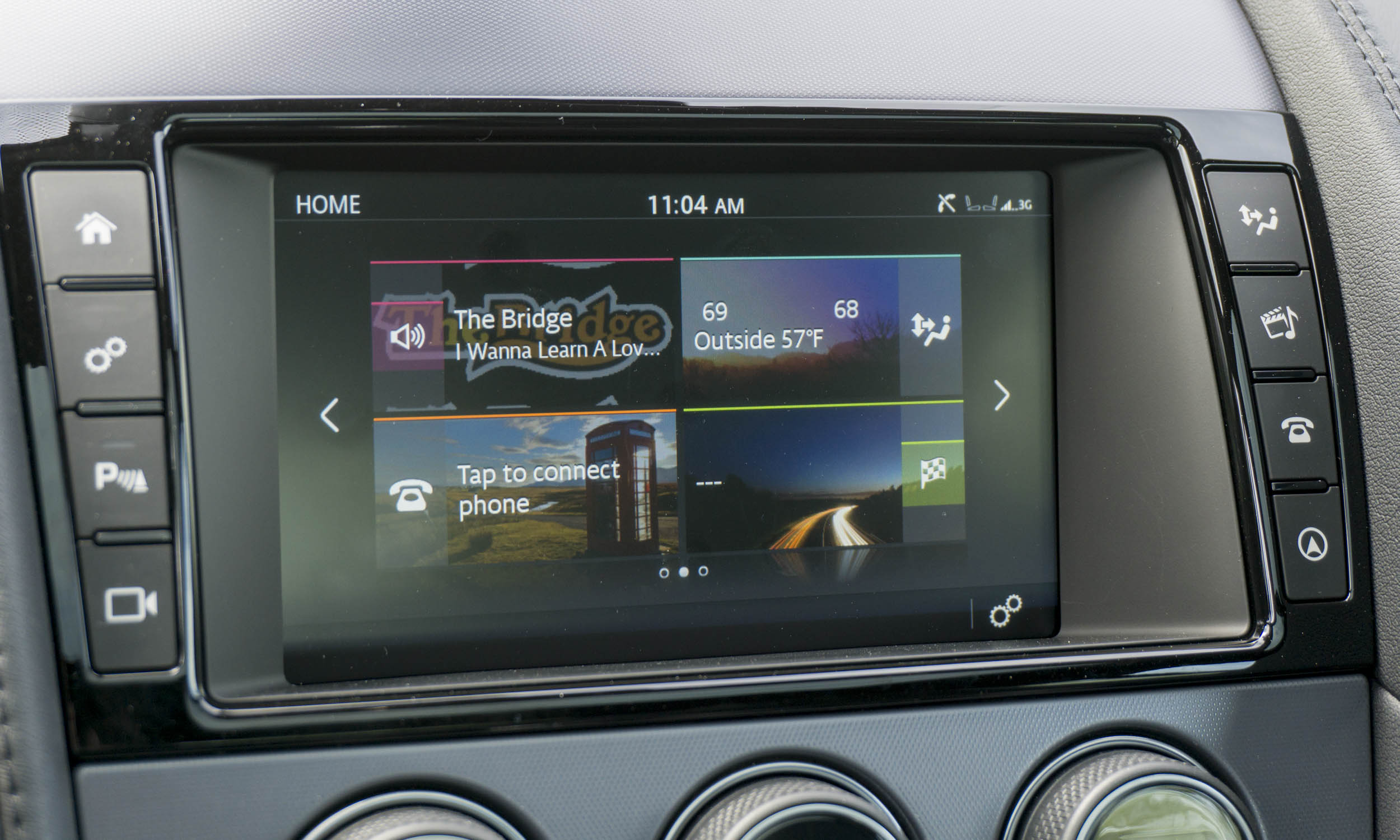 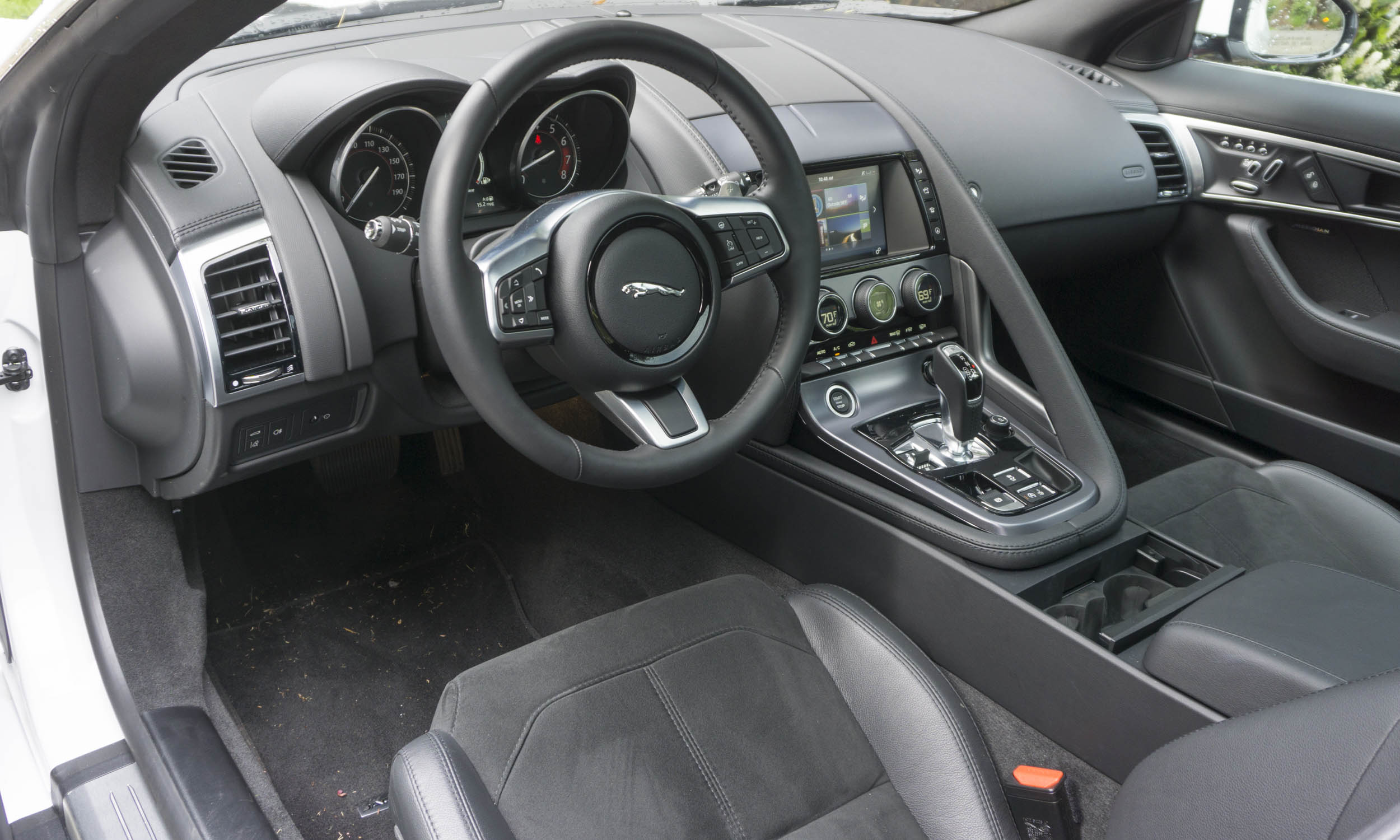 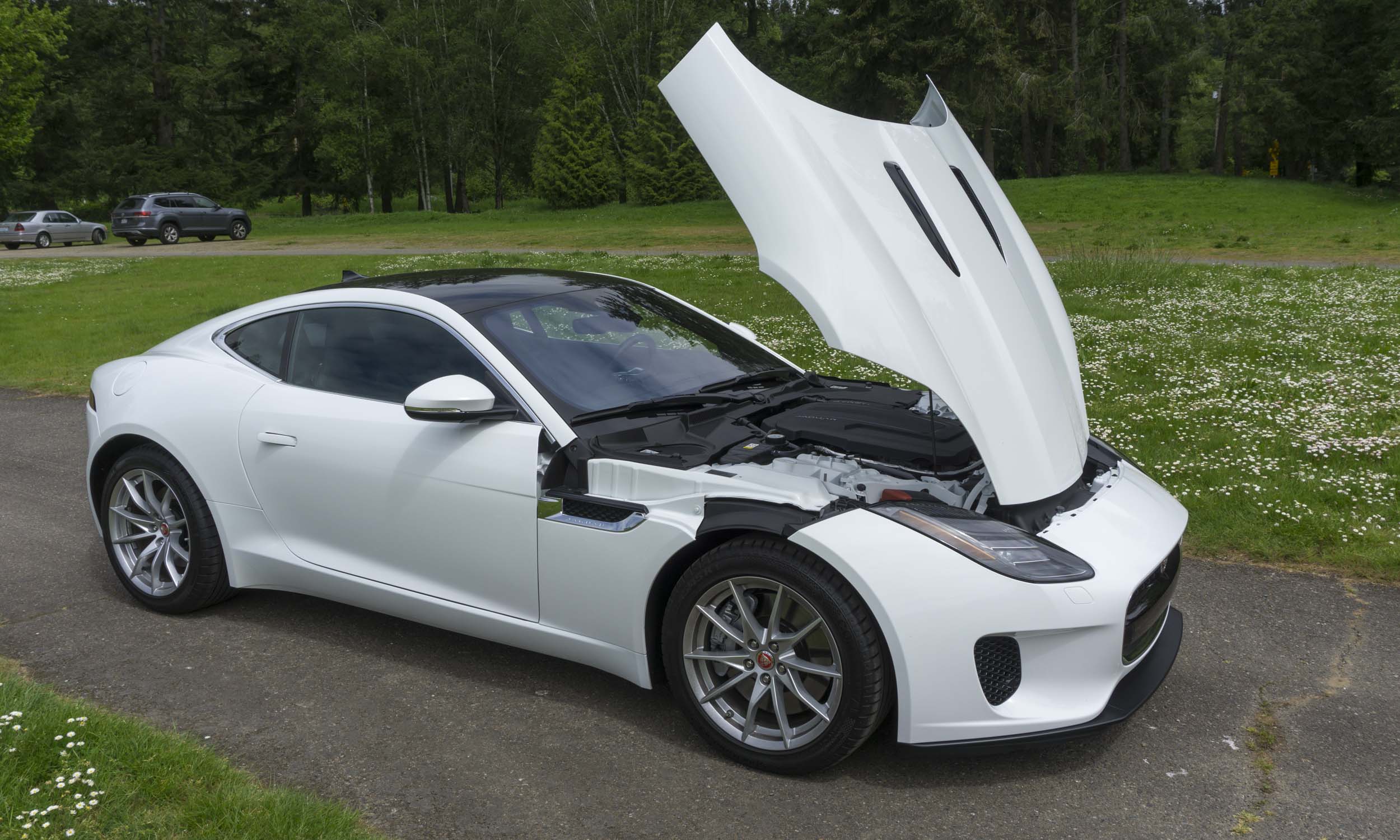 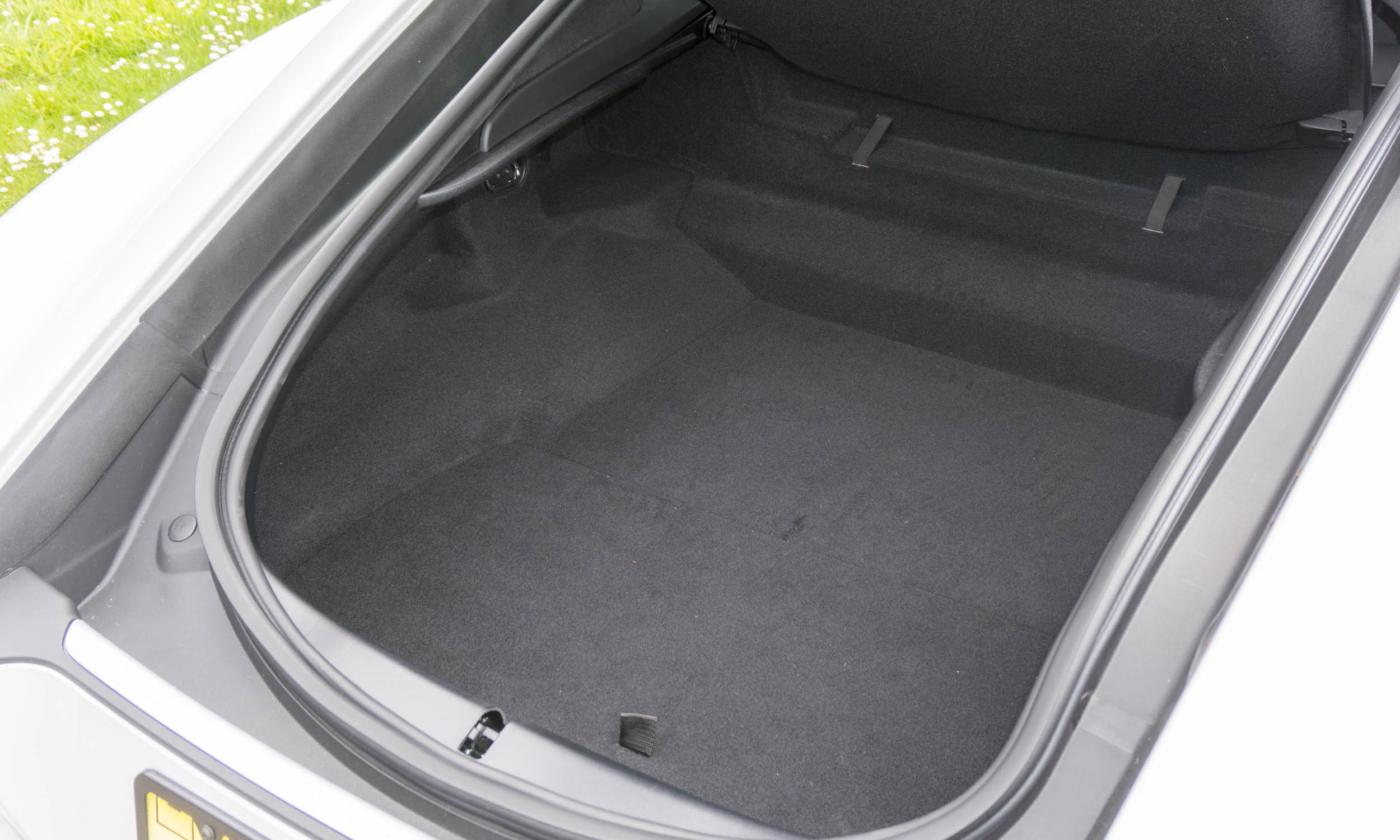 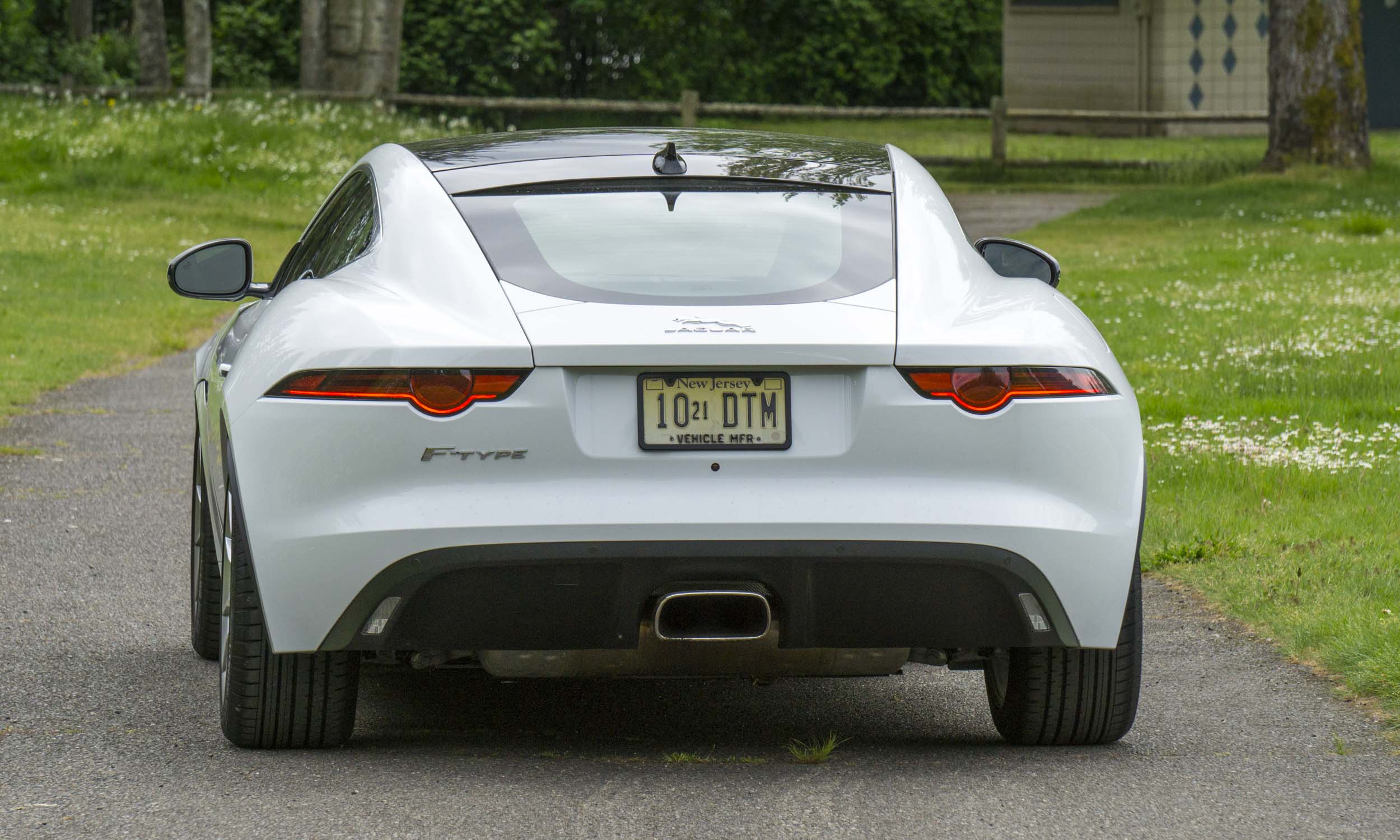 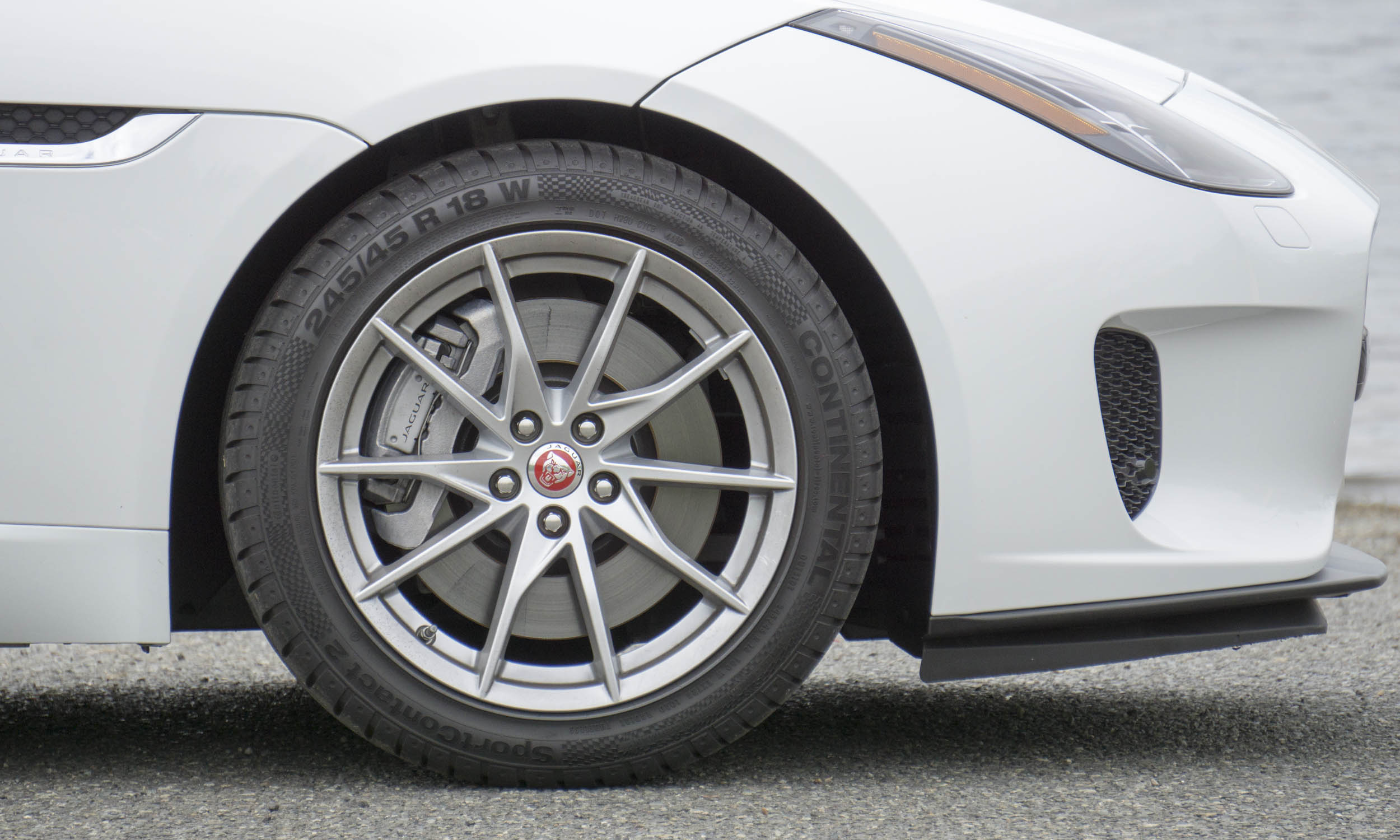