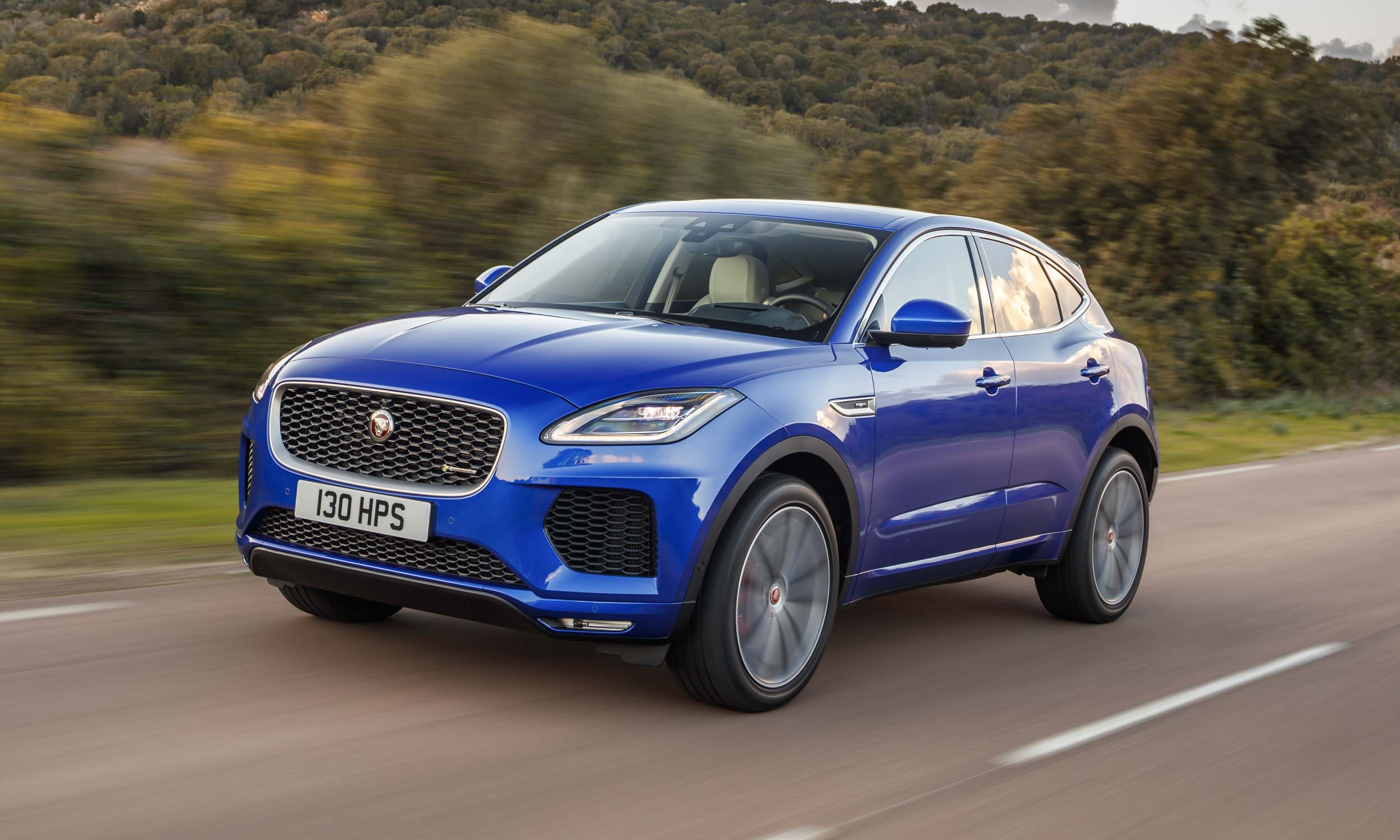 © Jaguar Land Rover North America
Jaguar Crossover SUVs
Automaker Jaguar Land Rover already produces a full line of Land Rover SUVs, so logic would dictate that Jaguar does not need to add SUVs to its lineup. But the first Jaguar crossover, F-PACE, easily leapt to the top of Jag sales charts after joining the lineup last year. While the Land Rover pedigree stems from a history of extreme off-road vehicles, Jaguar crossovers are poised to spring from the sporting character of Jaguar’s heritage. Thirteen inches shorter than F-PACE, the new E-PACE slots between Land Rover’s Range Rover Evoque and Discovery Sport, aimed at the fast-growing luxury compact crossover segment. 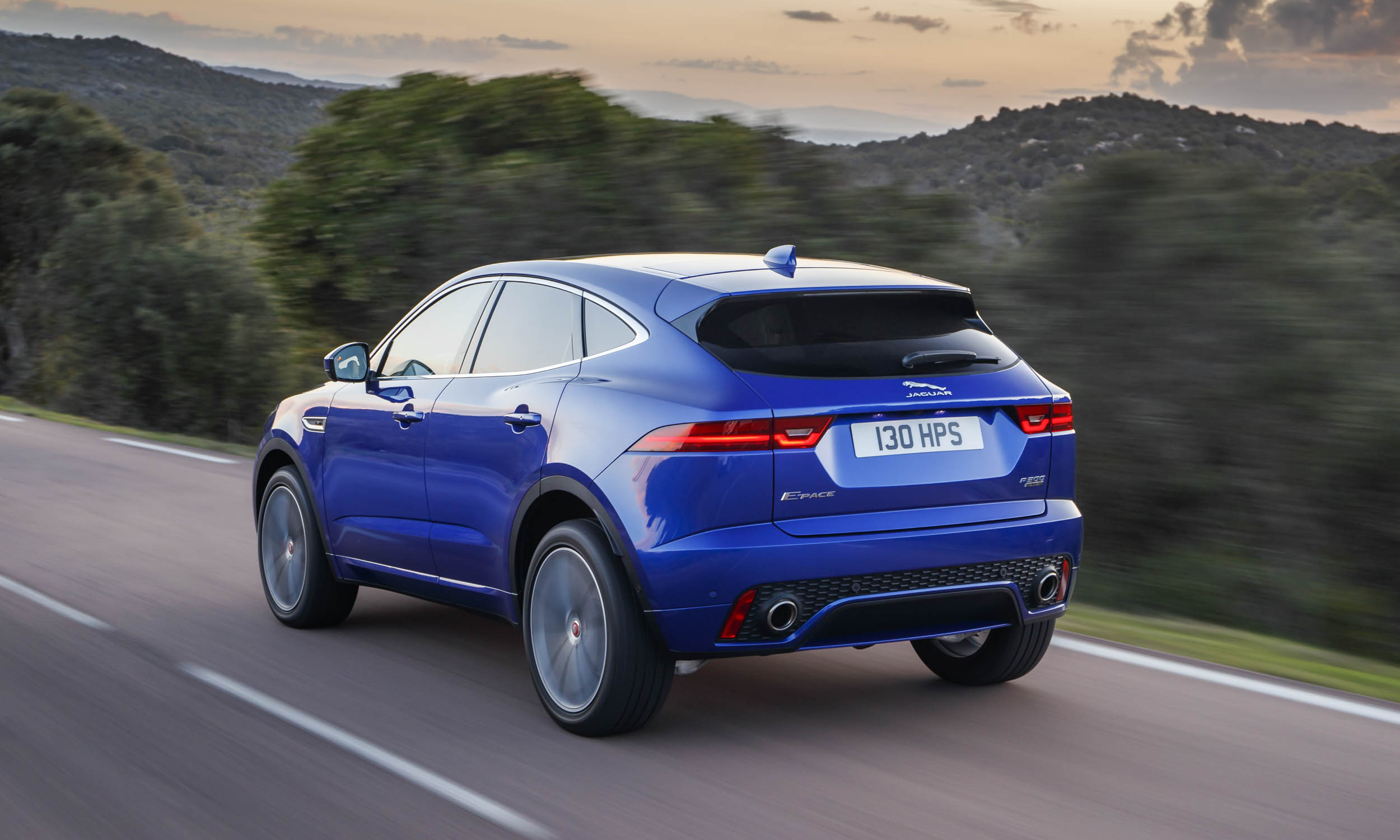 © Jaguar Land Rover North America
Sporty Design
The E-PACE design is heavily influenced by Jaguar’s beautiful sport coupe, the F-TYPE. Exterior design elements that reflect the F-TYPE include swept-back headlights, side window graphics and a tapered cabin to emphasize the rear-fender haunches. At the front sits a bold Jaguar grille, and on S and above trims LED headlights with Jaguar J-blade daytime running lights around the outer edges anchor an aggressive look. At the rear, the E-PACE receives slim full-LED taillights and a roof-mounted spoiler to extend the sweeping roofline. The overall proportions are well balanced, giving the E-PACE a dynamic, sporty look consistent with Jaguar’s sports car heritage. 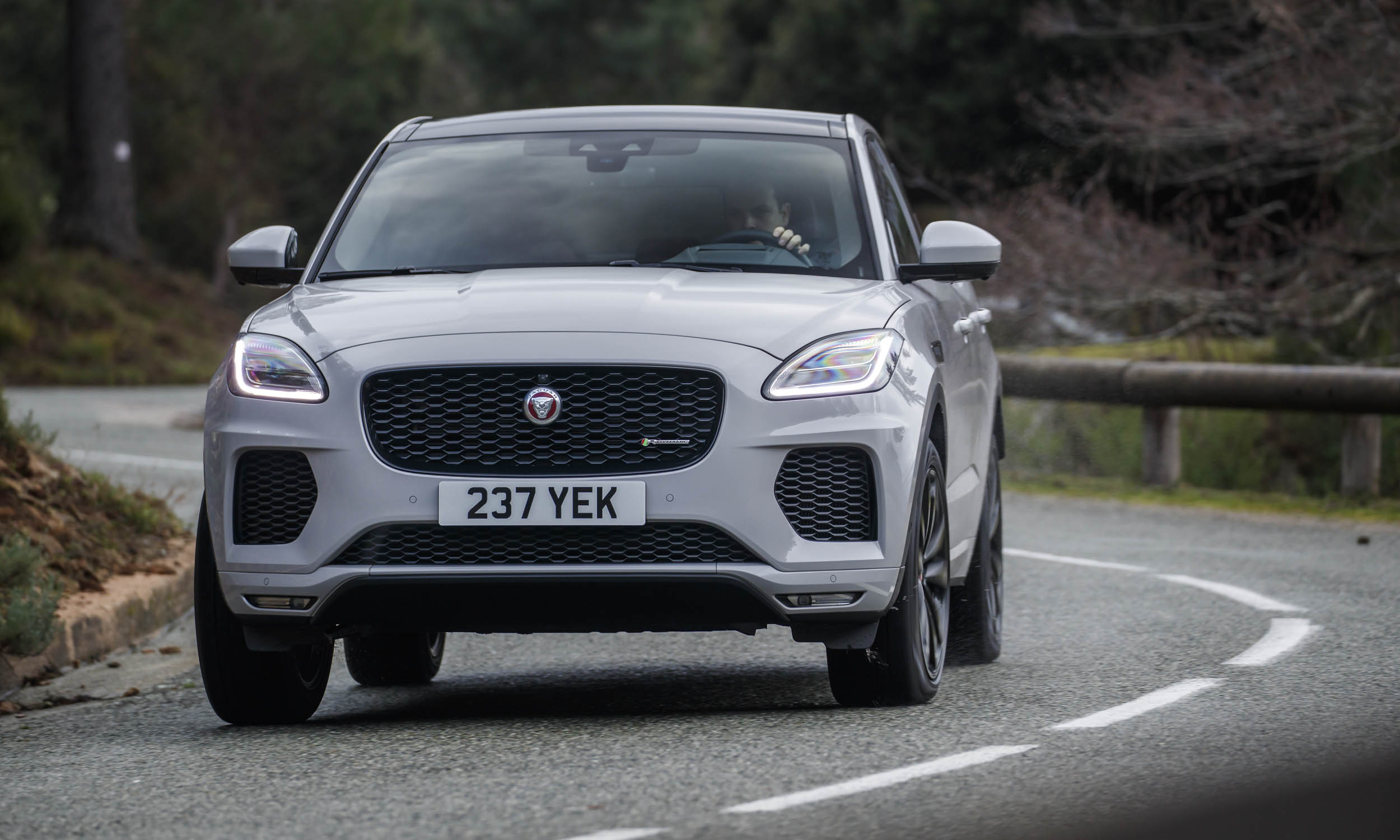 © Jaguar Land Rover North America
Model Lineup
The E-PACE lineup is divided into two segments based on engine choice: The Core line is powered by a 246-horsepower 2.0-liter engine, and the R-Dynamic line draws power from a 296-horsepower version of the same 2.0-liter engine. The Core line is designated by a P250 badge on the liftgate, and is offered in Base, S and SE trim levels, while the R-Dynamic is badged P300 and available in S, SE and HSE versions. For the first year, the E-PACE First Edition is also offered based on the R-Dynamic SE, powered by the 246-horsepower P250 engine. Standard equipment on the base E-PACE includes LED headlights, all-wheel drive, JaguarDrive control with selectable drive modes, a leather-wrapped steering wheel, a 10-inch TouchPro touchscreen and 17-inch alloy wheels. The E-Pace S adds grained leather seats, 8-way power front seats, Navigation Pro, a Wi-Fi hotspot, traffic sign recognition and 18-inch alloy wheels. The SE adds 4-way electric lumbar for front seats, a Meridian Sound System, Drive Pack (Blind Spot Assist, Adaptive Cruise and High-speed Emergency Braking), a power liftgate and 19-inch alloy wheels. 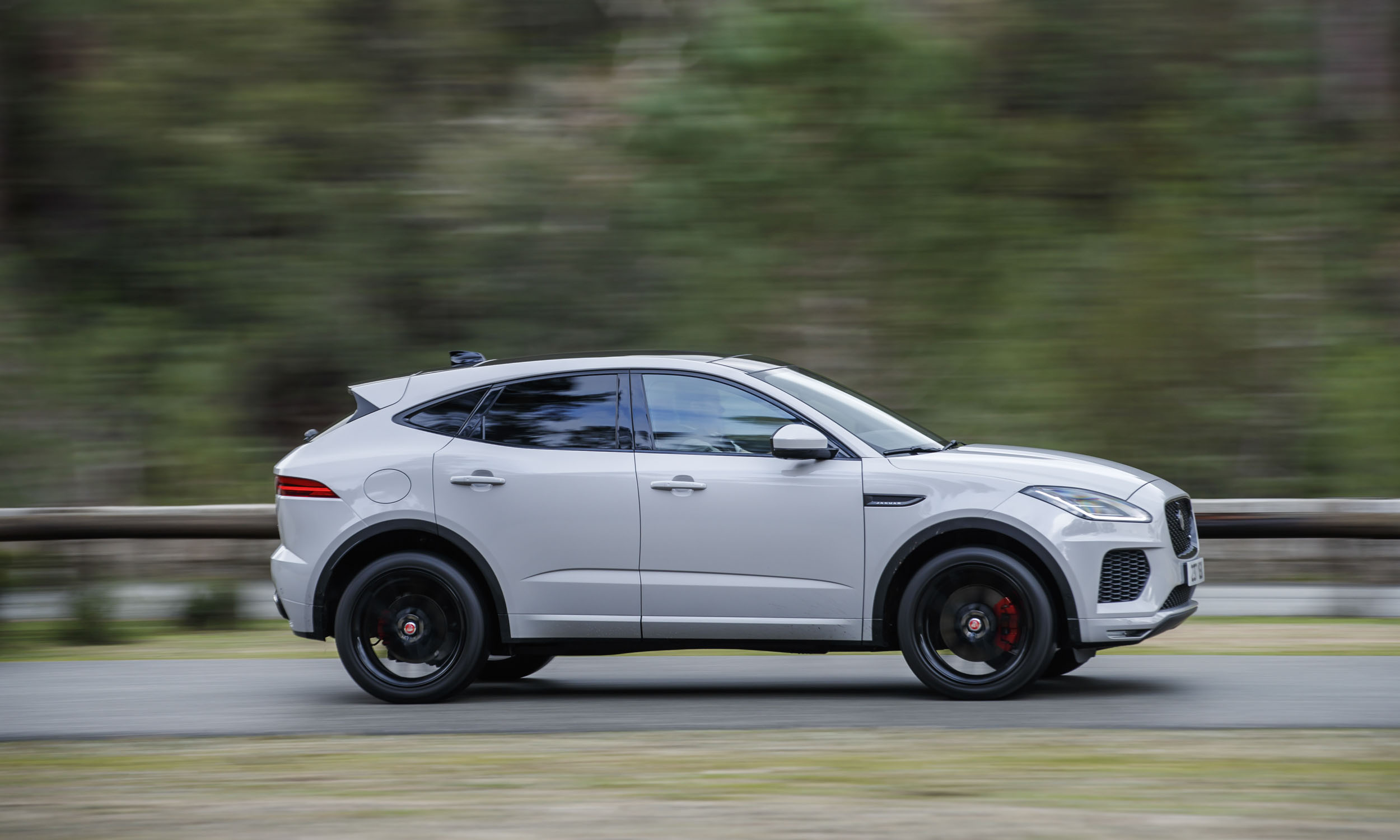 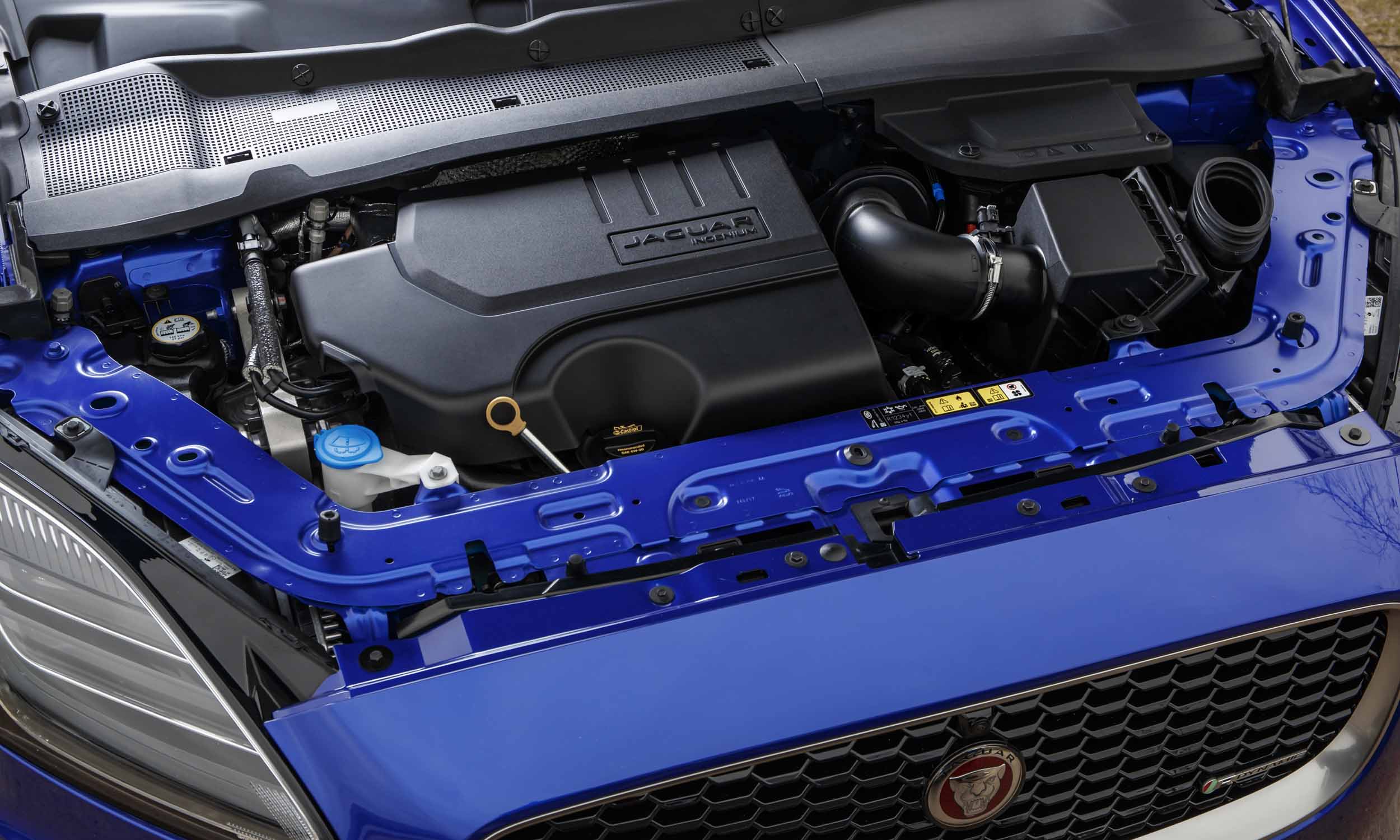 © Jaguar Land Rover North America
Under the Hood
The standard engine for the E-PACE is a new 2.0-liter Ingenium 4-cylinder unit producing 246 horsepower and 269 lb-ft of torque, combined with a ZF 9-speed automatic transmission and standard all-wheel drive with a torque-vectoring system to distribute torque between the front and rear axles based on driving conditions. The E-PACE R-Dynamic is powered by the uprated version of the 2.0-liter Ingenium producing 296 horsepower and 295 lb-ft of torque, also combined with the ZF 9-speed automatic and the Jaguar Active Driveline all-wheel-drive system. The Active Driveline includes two electronically-controlled clutches on the rear axle to distribute torque between the rear wheels with the ability to distribute up to 100 percent of that torque to one side or the other in 0.1 seconds to adapt to varying conditions. In low-traction conditions, the Active Driveline will even allow the driver to start power-on oversteer until the vehicle regains traction and will lock both rear clutches to respond, similar to a locking differential. The 246-horsepower E-PACE is EPA rated at 21 mpg city / 28 mpg hwy / 24 combined and the R-Dynamic is rated at 21 mpg city / 27 mpg hwy / 23 mpg combined. 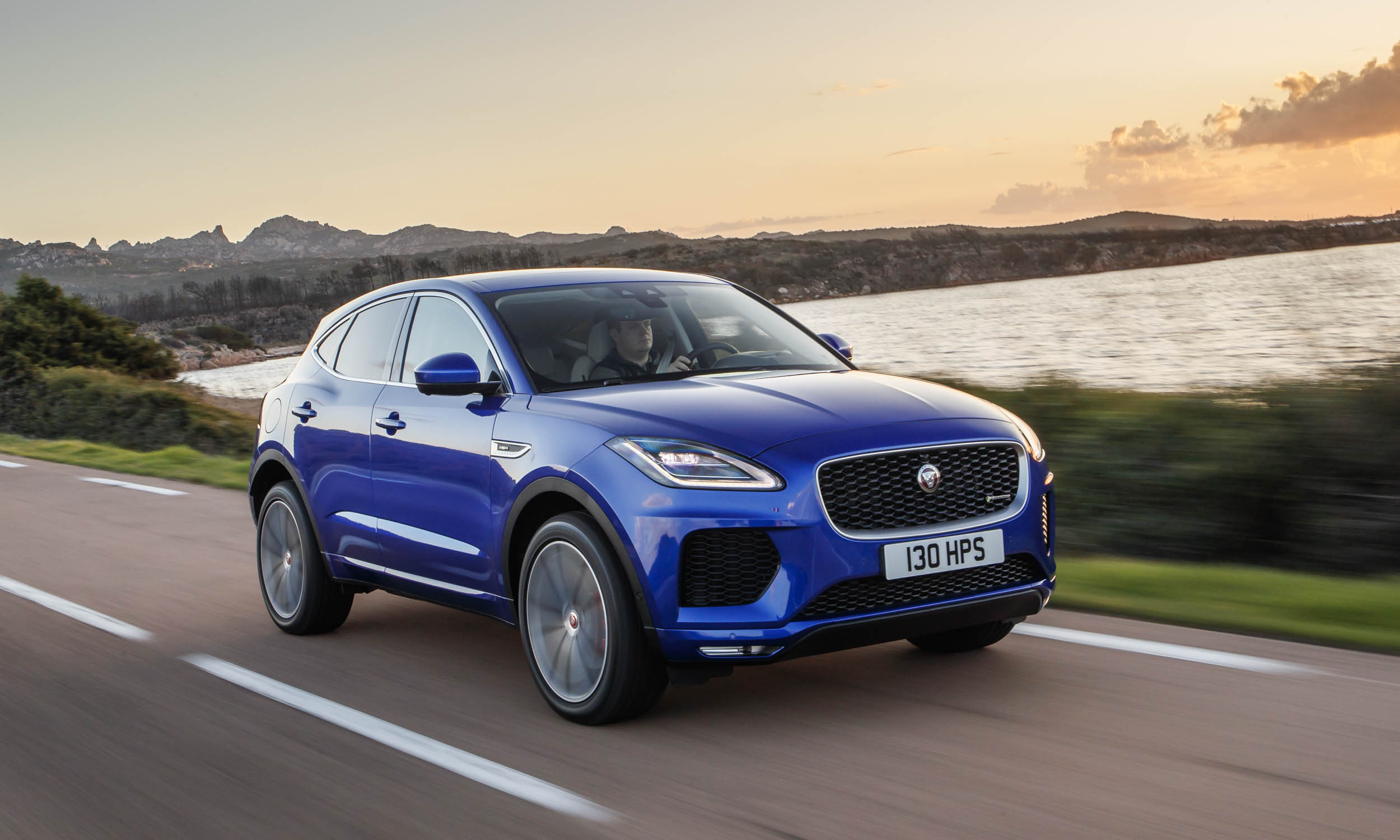 © Jaguar Land Rover North America
Body Structure and Suspension
The architecture of the new Jaguar E-PACE employs a combination of ultra-high-strength steels, lightweight aluminum and composites to create a stiff, strong and lightweight structure. The hood, front fenders, roof and liftgate are aluminum for weight savings, while the structure that supports the instrument panel is made of lightweight magnesium. The lightweight suspension features a MacPherson strut design for the front with a specially-tuned front subframe for a stiff structure, stiff bushings and anti-roll bars to improve steering response and control with low roll angles. Based on the Integral Link rear suspension developed for the F-PACE, the compact rear suspension of the E-PACE maximizes interior space. 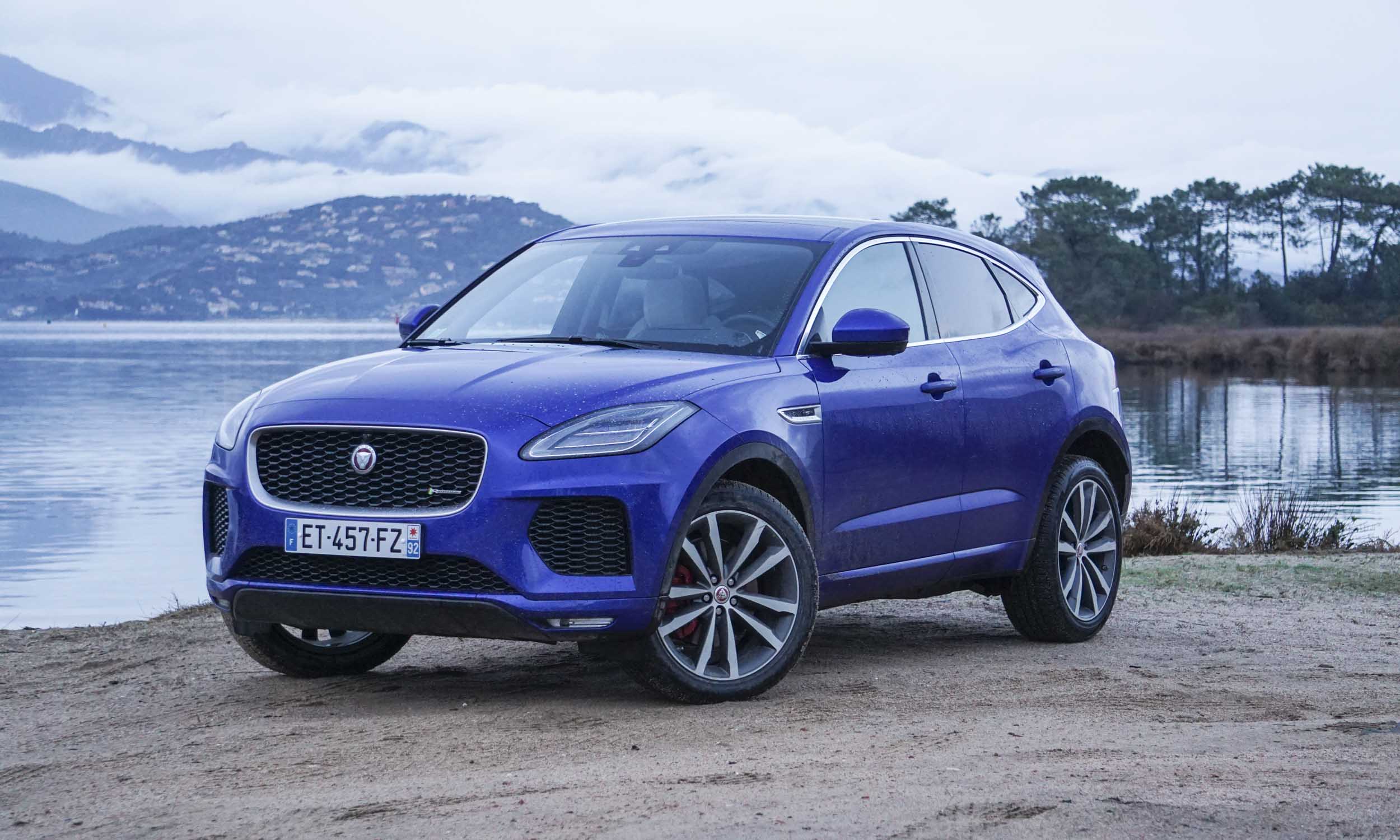 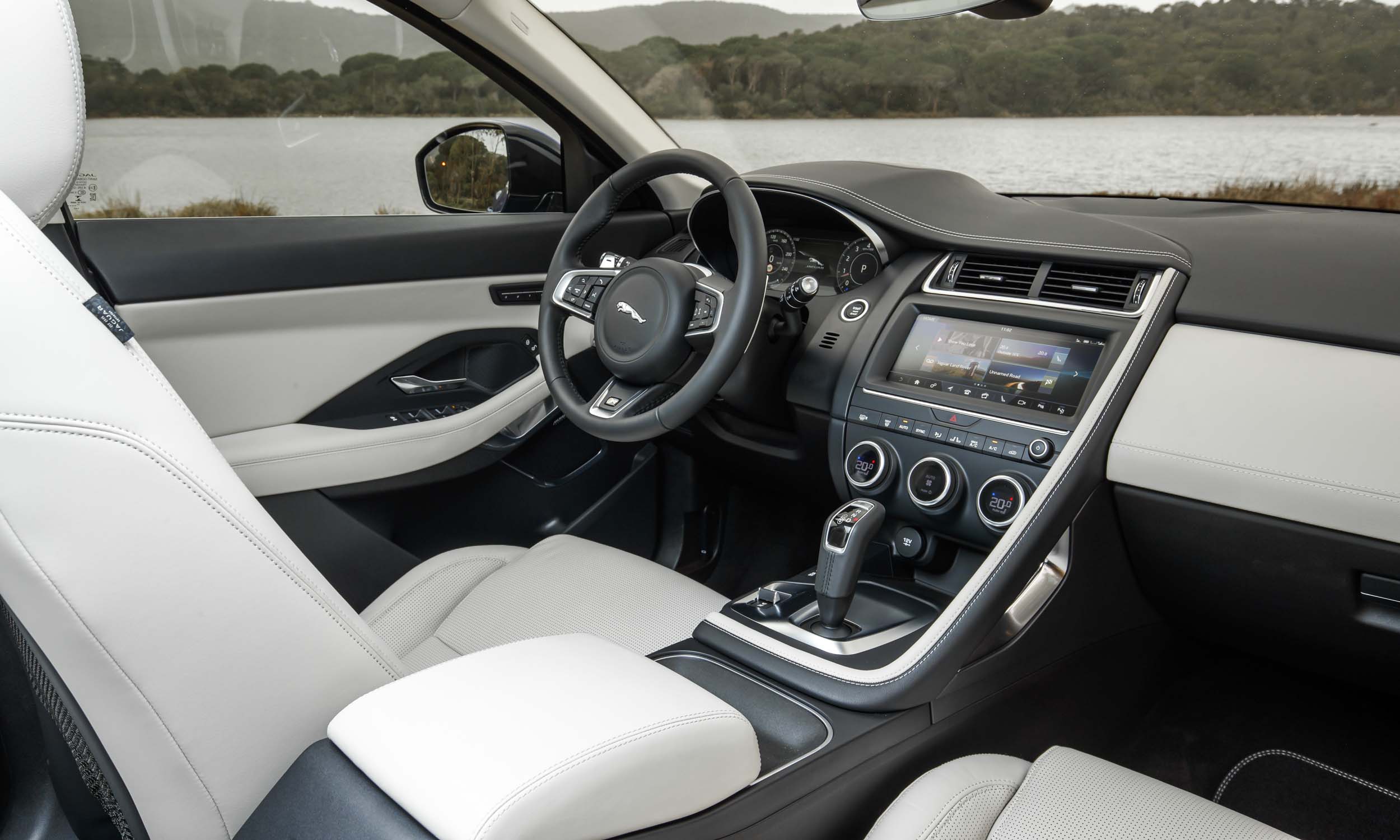 © Jaguar Land Rover North America
Inner Space
Inside, the E-PACE also draws from the F-TYPE with a passenger handle on the right side of the asymmetrical center stack/console, similar to the design of the F-TYPE and the “sport car-style” shifter — the same shifter as the F-TYPE — rather than the rotary shifter design of the F-PACE and Jaguar sedans. Leather is used for the steering wheel, console grab handle and gear shift knob, and Nobel Chrome trim accents include the gear shift surround, instrument panel, side vents and door handles. The 10-inch TouchPro screen is integrated into the center stack above the climate system controls, bucking the trend of the screen sticking up above the dash. Blind Spot Assist is standard on SE and HSE versions and optional on E-PACE S as part of the Drive Pack, which also includes Adaptive Cruise Control and High-Speed Emergency Braking. 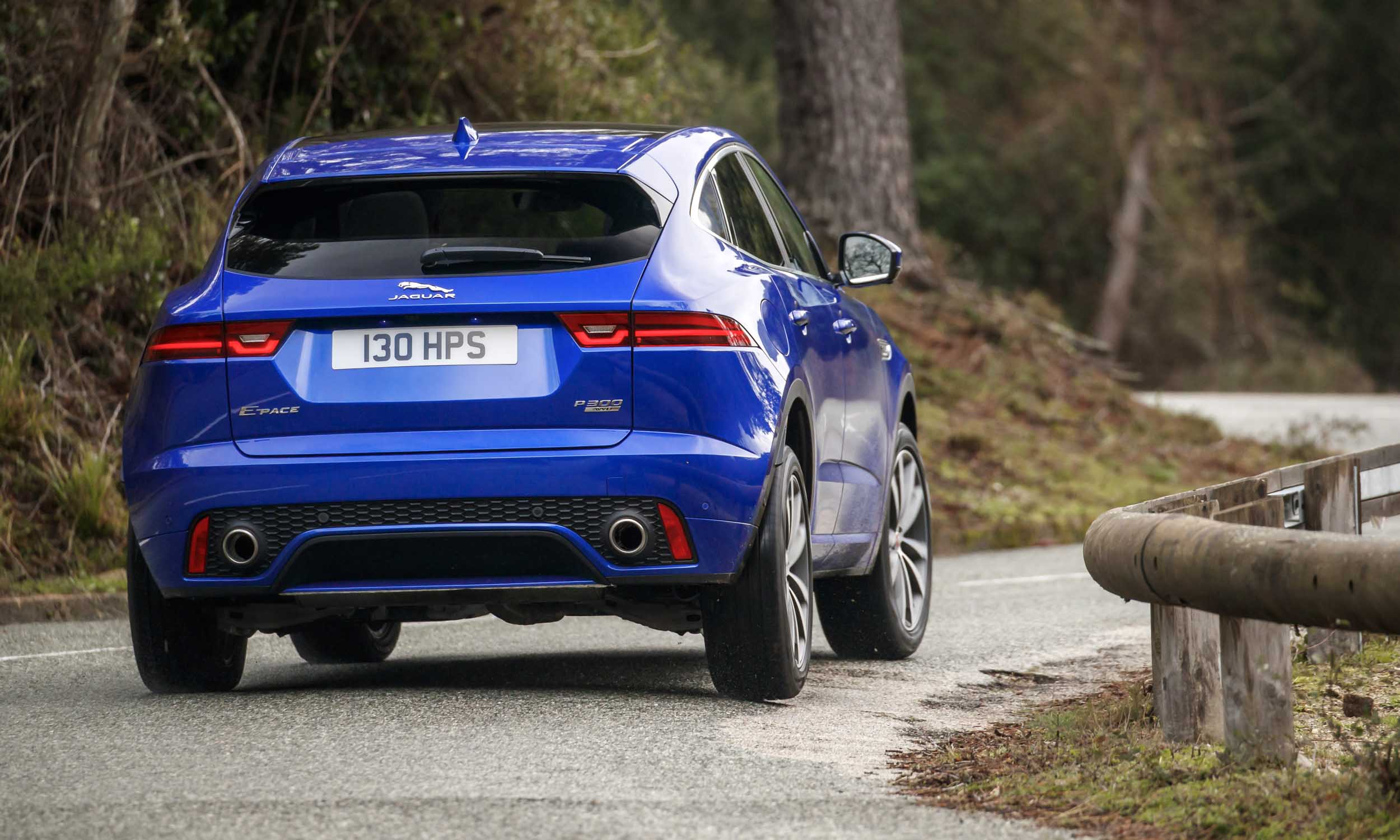 © Jaguar Land Rover North America
On the Road
The Jaguar E-PACE promises a dynamic drive, and on winding mountain roads it feels like a nimble sport sedan. We drove the E-PACE S R-Dynamic on the Mediterranean island of Corsica, known as the island of 10,000 turns. From small coastal towns, through forests and climbing thousands of feet on twisty mountain roads, retracing some of the same routes used by the famous Tour de Corse rally, the Jaguar E-PACE turns in to corners crisply and transitions smoothly from side to side with little body roll. Although built on a front-wheel-drive platform, with the Active Driveline the E-PACE responds and feels like a rear-drive vehicle, with torque directed to the outside rear wheel in corners. The 2.0-liter engine delivers plenty of low-end torque out of corners and the 9-speed automatic delivers smooth, quick shifts. As drivers continue to flock to SUVs, the E-PACE is an excellent substitute for a sport sedan. 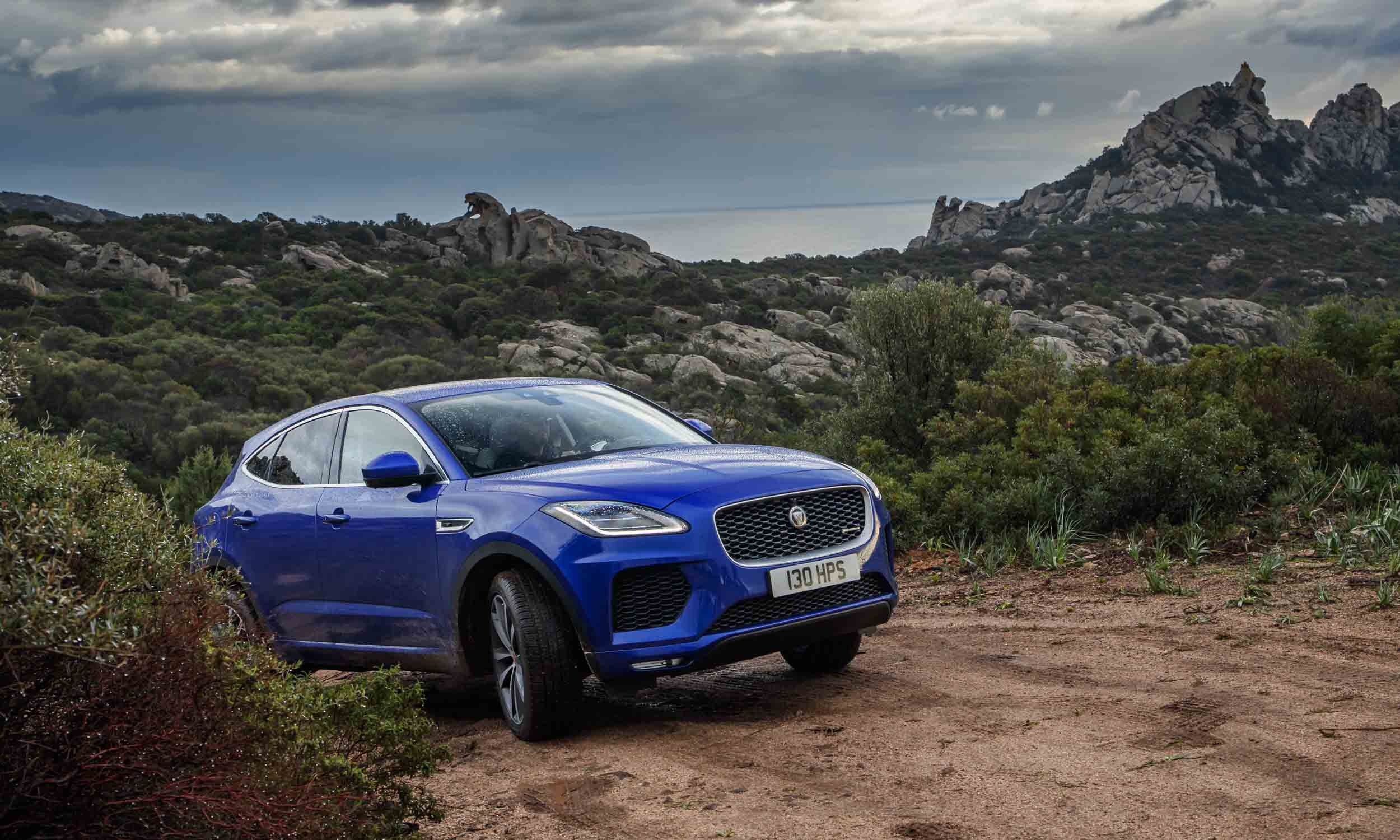 © Jaguar Land Rover North America
Off-Road
Most E-PACE miles will be logged on paved roads, but if the need arises the E-PACE has the chops to travel off-road as well. We drove on dirt roads and even climbed a tough section with some larger rocks to test the All Surface Progress Control — essentially a low-speed off-road cruise control to tackle tough conditions. While the E-PACE impresses in tricky off-road conditions, the all-wheel-drive system and electronic traction aids improve performance any time that adverse rain and snow conditions arise.

© Mike Meredith, Automotive Content Experience
Right for You?
The all-new Jaguar E-PACE is a hot compact luxury crossover — the newest entry in one of the toughest segments of the automotive market. It also drives like a sport sedan, so if you’re making the transition to a crossover, you don’t have to give up what you enjoy about a sport sedan when making the change. The competition is strong, but the E-PACE is a Jaguar. If you love the nimble, precise feel of a quality sport sedan, but need the added utility of a crossover, the Jaguar E-PACE just might be the vehicle you seek. 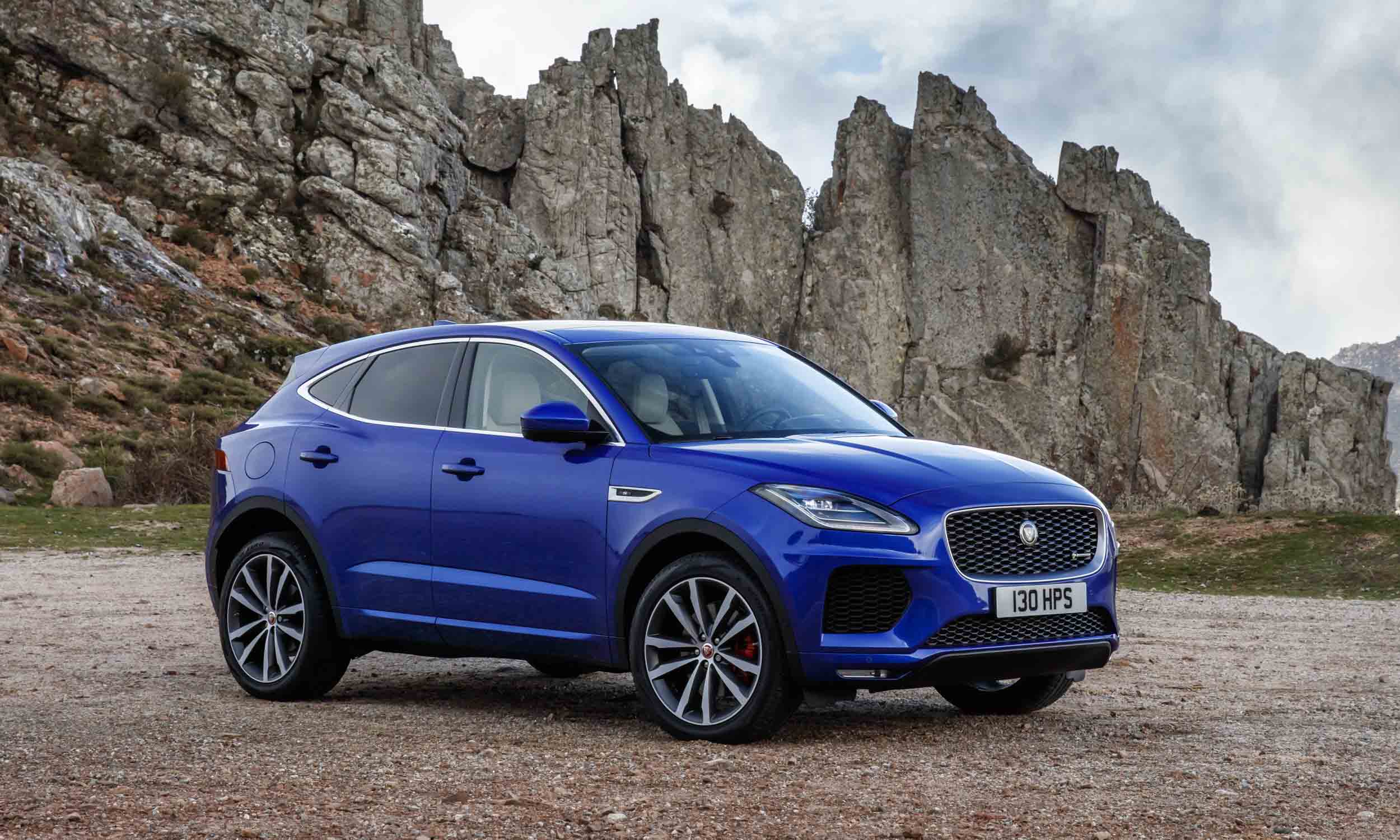