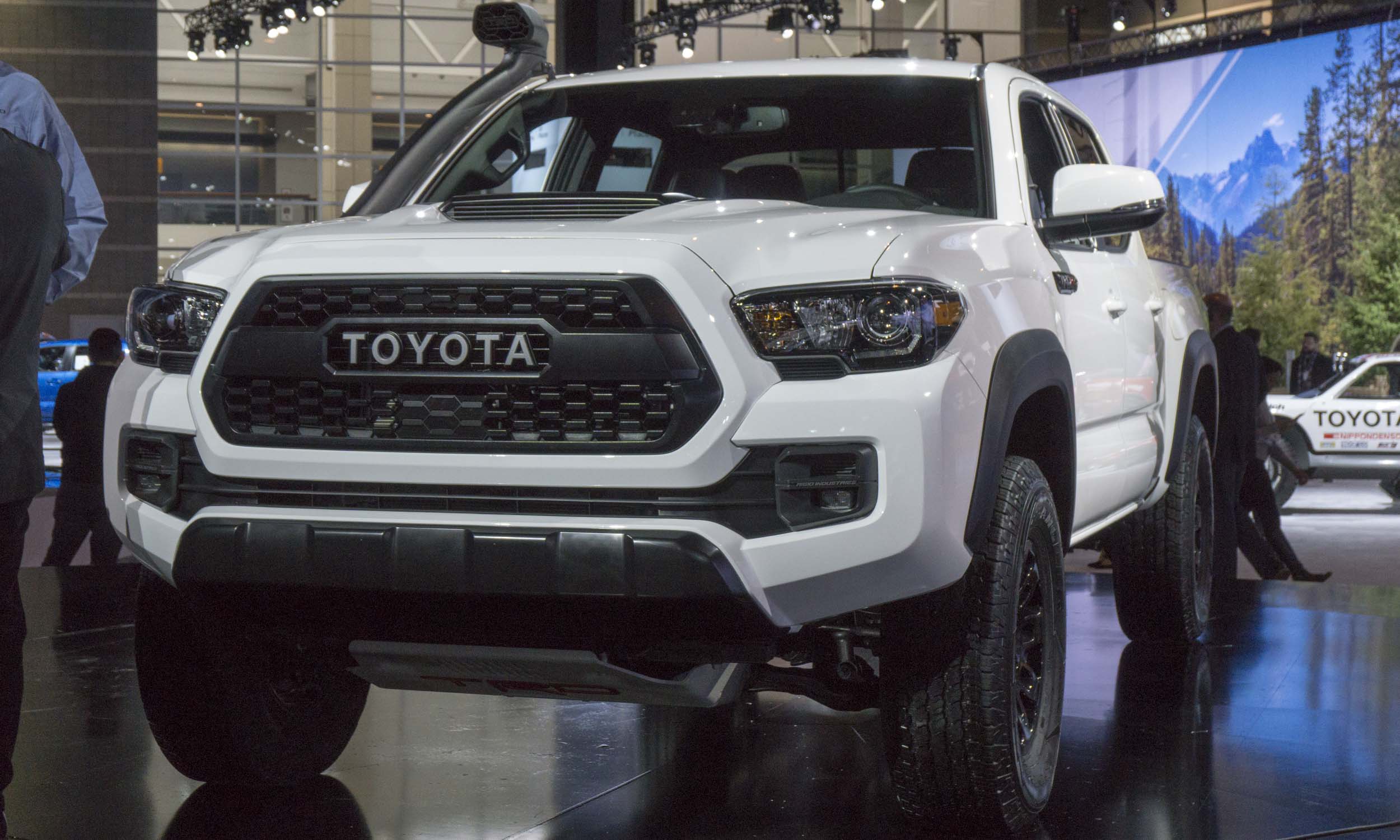 Popular Utility
Sales numbers don’t lie: American drivers still love trucks, and every year many of the most popular vehicles at the Chicago Auto Show are trucks and SUVs. This year’s show featured new production vehicles, concepts, and a vast array of accessories for vehicle customization. Click through for a quick look at the top trucks and SUVs of the 2018 Chicago Auto Show. 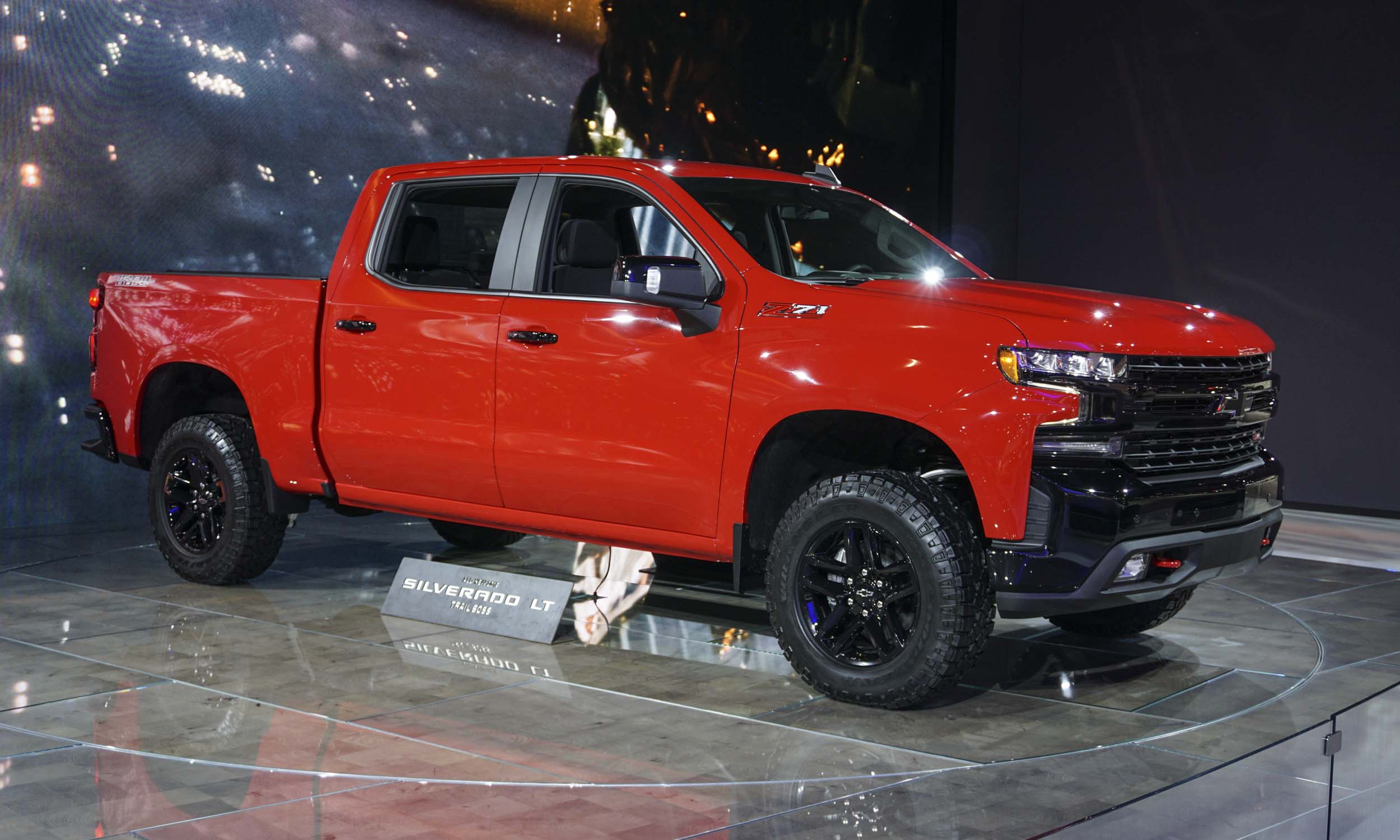 2019 Chevrolet Silverado 1500
The 2019 Chevrolet Silverado 1500 debuted in January at the 2018 Detroit Auto Show, and as the second-best-selling vehicle in the U.S. last year, the new Silverado continued to draw attention in Chicago. The new Silverado features bold styling, more configurations, multiple engine choices and a variety of trim levels. Even with a longer wheelbase, more passenger room and additional cargo volume, the 2019 Silverado weighs in 450 pounds lighter than the current model thanks to mixed materials and mass reduction expertise. Silverado will be available with six different engine / transmission combinations, including two new V8s — a 5.3-liter and a 6.2-liter — which offer Dynamic Fuel Management that deactivates cylinders when not needed. A new 3.0-liter diesel Duramax engine will also be available. 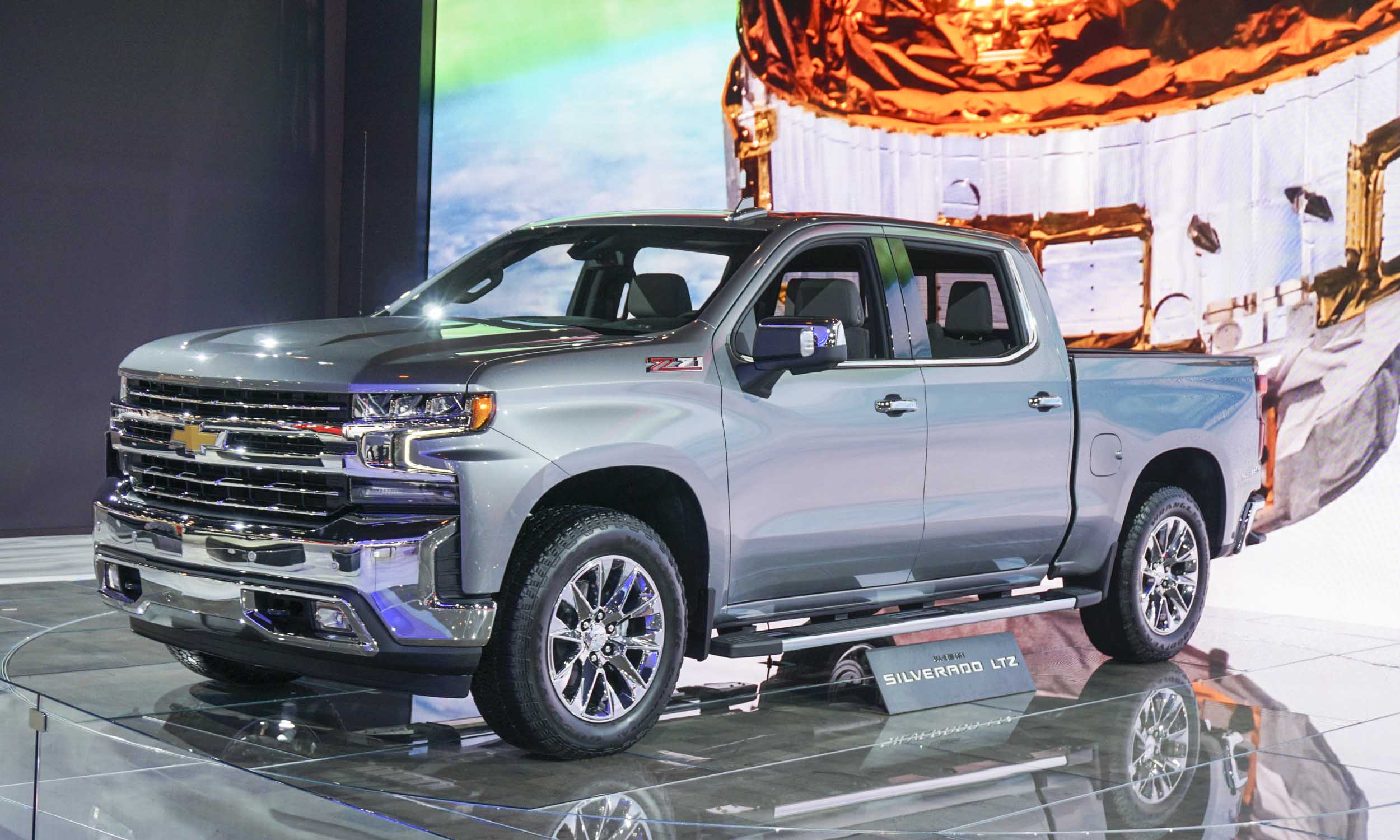 2019 Chevrolet Silverado 1500
Silverado’s new design incorporates a big grille with sleek, narrow headlights and LED accent lights below. Elements such as the front bumper tucking behind the quarter panels and a rear spoiler on the cab with a small spoiler on the tailgate all facilitate smoother airflow. The truck’s interior is completely updated with more space as well as redesigned control buttons and knobs. Silverado will continue to offer high-tech features such as Apple CarPlay, Android Auto, wireless phone charging and 4G LTE Wi-Fi connectivity. Eight trims are offered, including a new Trailboss version designed for off-roading, so it has a 2-inch suspension lift, big off-road tires and a complete off-road package. 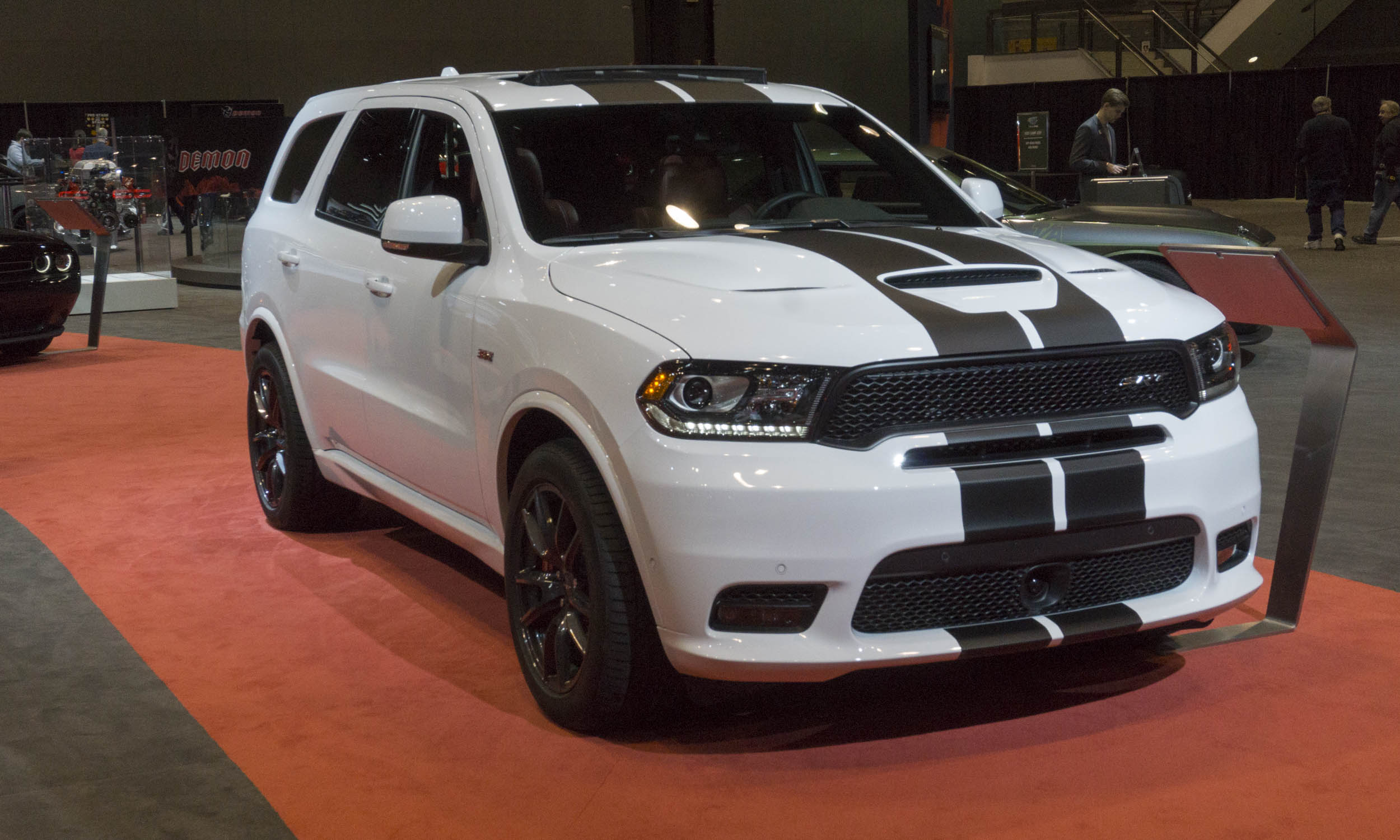 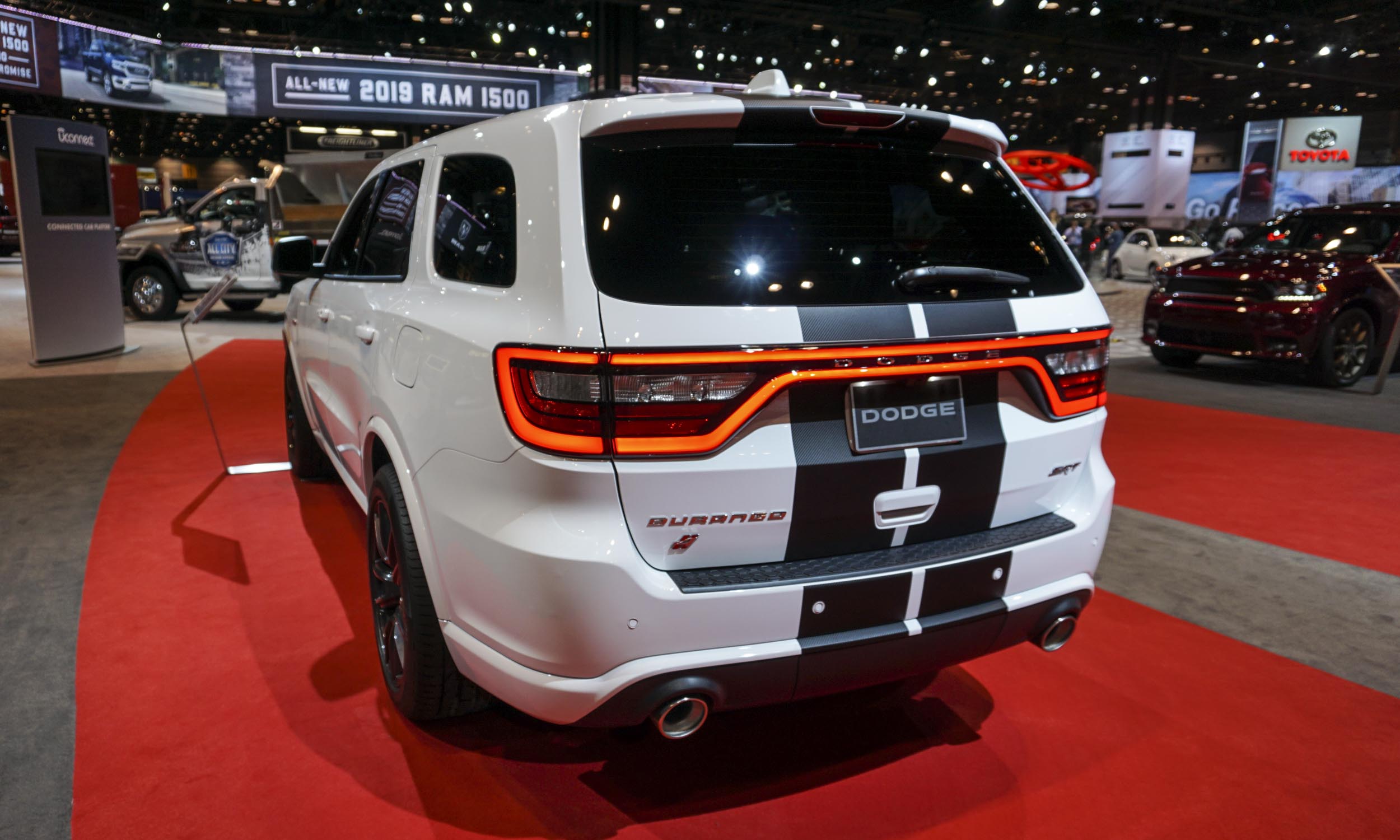 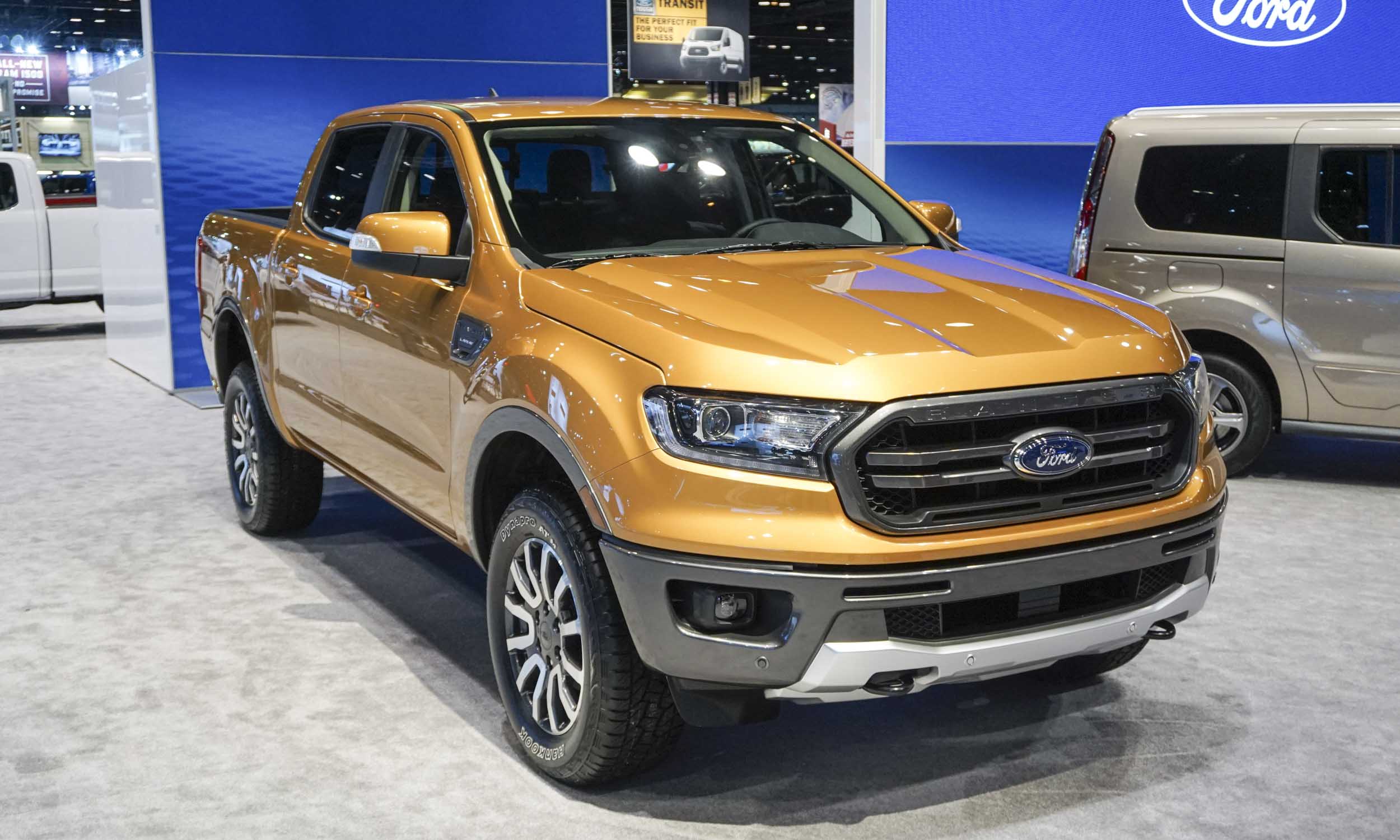 2019 Ford Ranger
Another popular truck at the Chicago Auto Show that debuted at the Detroit show in January is the Ford Ranger, a model that returns Ford to the U.S. midsize pickup segment. The 2019 Ranger features a high-strength steel frame, a 2.3 -liter turbocharged EcoBoost engine and a 10-speed automatic transmission. Even though Ranger is already sold in other markets around the world, the 2019 model in Chicago has been engineered specifically for the North American market, with production scheduled to begin in late 2018 and sales beginning in early 2019. The 2019 Ranger will be offered in SuperCab and SuperCrew configurations and XL, XLT and Lariat trims with available Chrome, Sport appearance and FX Off-Road packages. 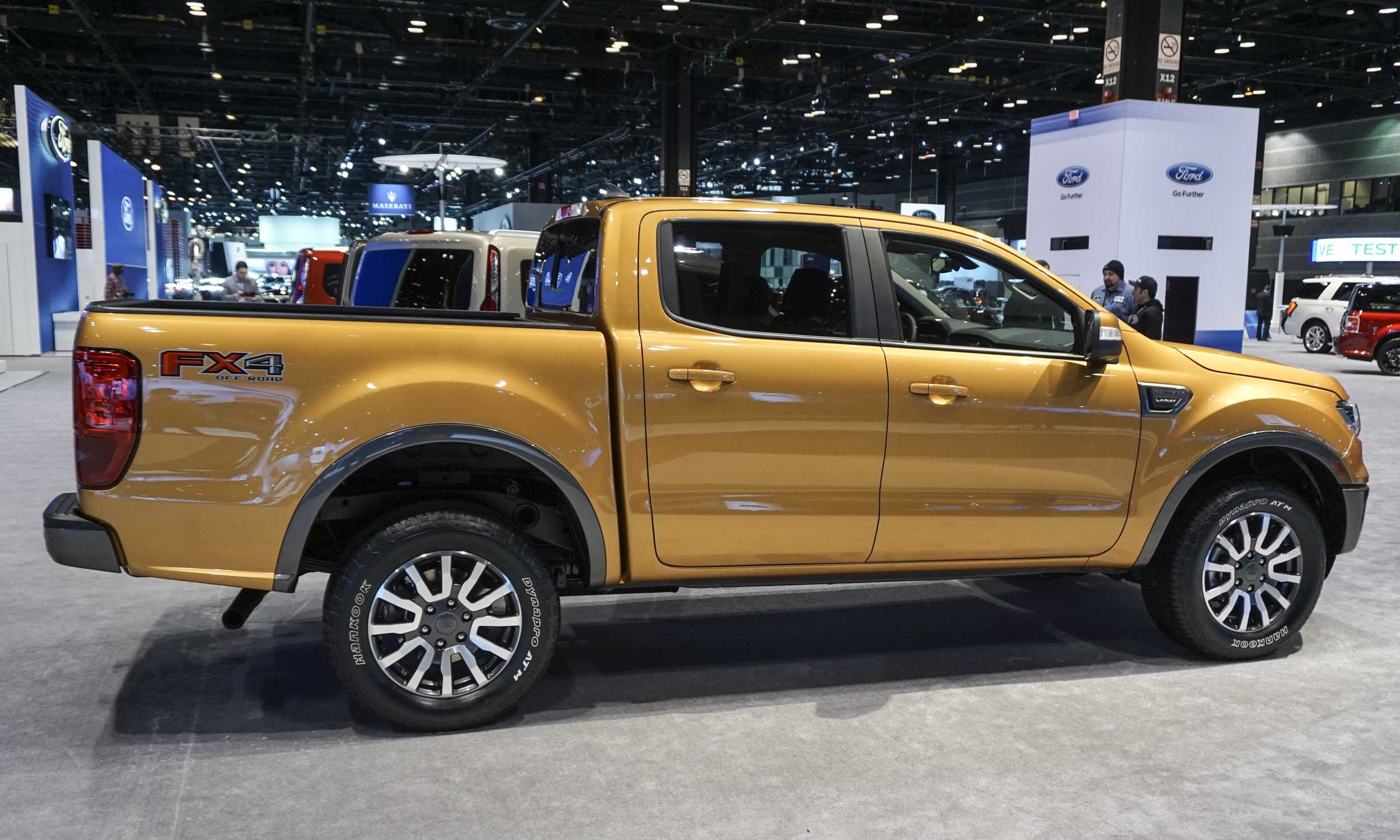 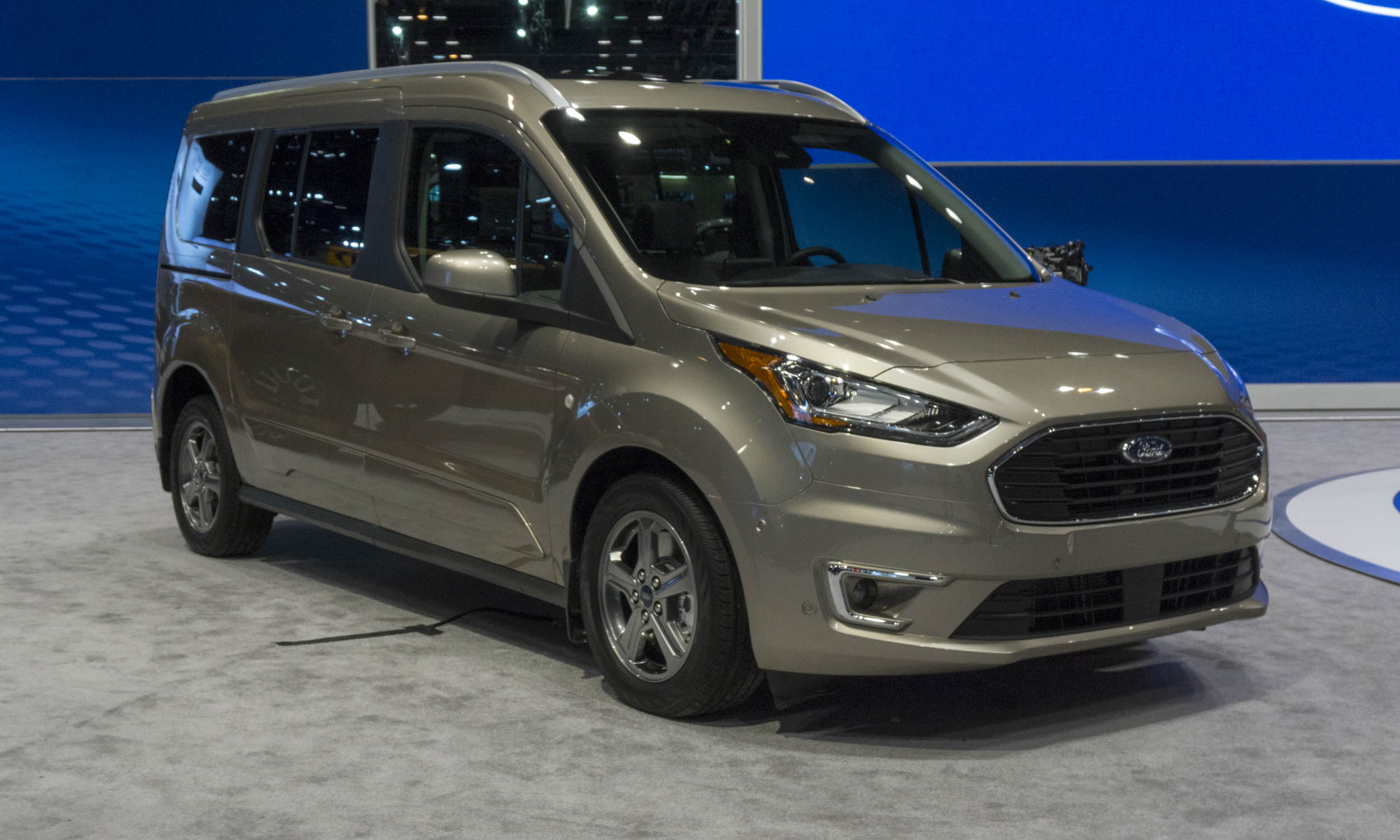 2019 Ford Transit Connect Wagon
In Chicago Ford debuted the new 2019 Transit Connect Wagon — the passenger version of the compact Transit Connect van — available in both 5-passenger and 7-passenger configurations with two different wheelbases. Designed to accommodate owners who need to balance the needs of both passengers and cargo, the new Transit Connect Wagon offers dual sliding side doors and an interior that can be quickly configured for cargo hauling. The design incorporates a new front fascia with a larger oval grille similar to other Ford models, and a shoulder line that rises toward the rear with a tapered window graphic. The Transit Connect Wagon is offered in three trim levels: XL, XLT and Titanium to span the spectrum from utility to luxury. 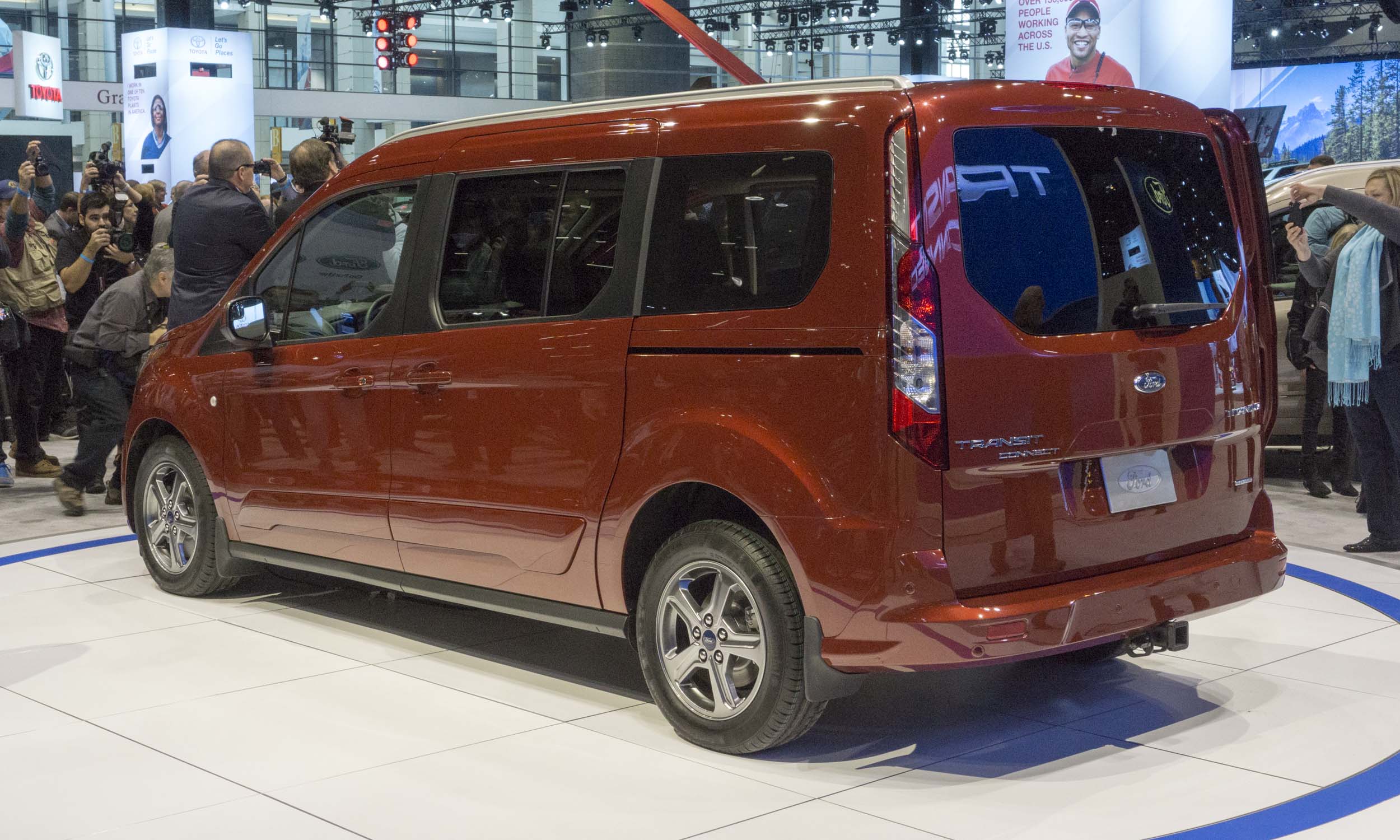 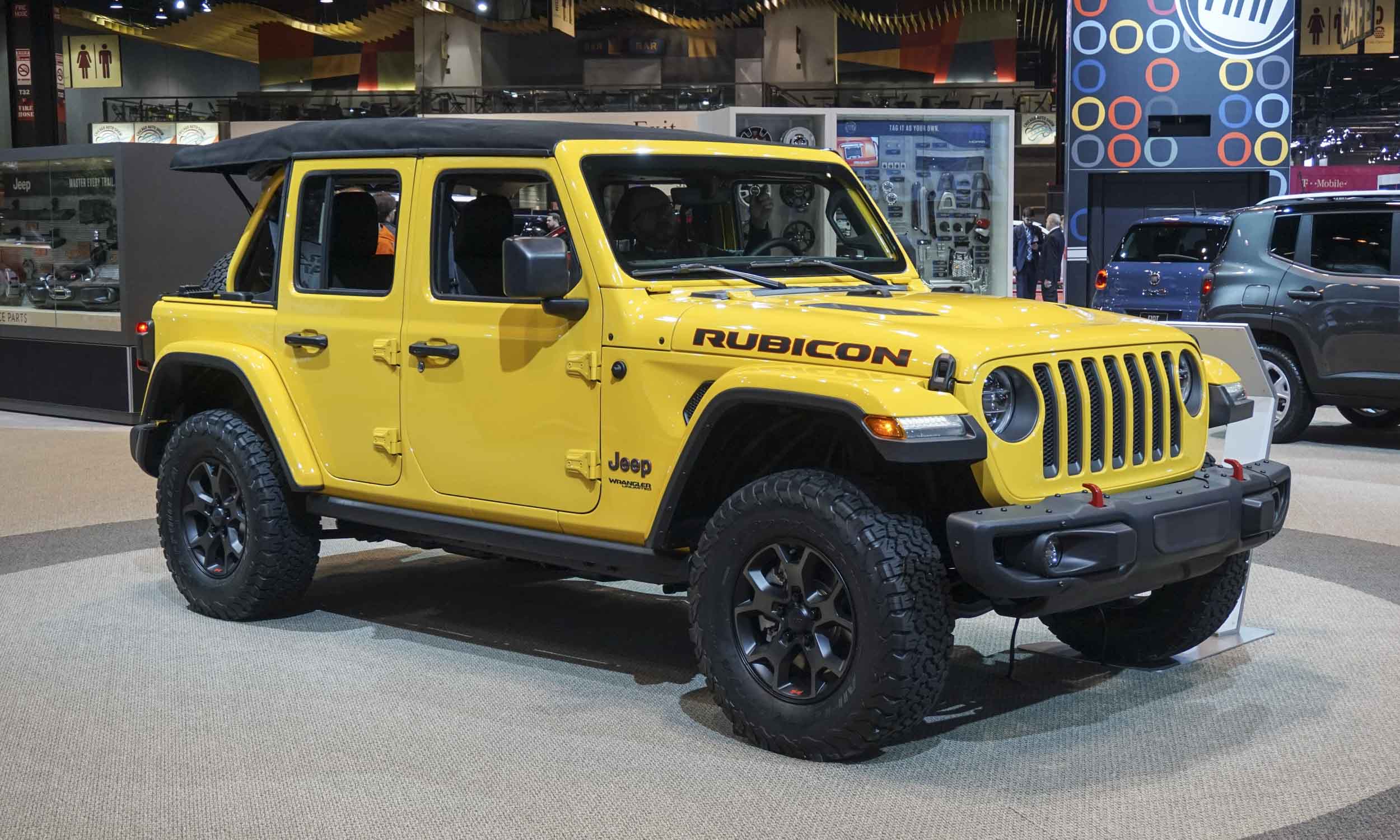 Jeep Wrangler
The opportunity to redesign an iconic vehicle rarely happens, and this year’s rework of the Jeep Wrangler has attracted lots of attention. The new Wrangler debuted last November at the Los Angeles Auto Show and the highly-anticipated model is now going on sale. Tracing its roots back to the original World War II U.S. military vehicle, the 2018 Wrangler stays true to its heritage in design and off-road capability while evolving with new fuel-efficient powertrains, improved on-road dynamics and advanced safety and technology. The 2018 Wrangler retains its 7-slot grille and round headlights, although the grille is taller and wider, and the outer edges now trace around the shape of the headlights, reminiscent of the Jeep CJ. 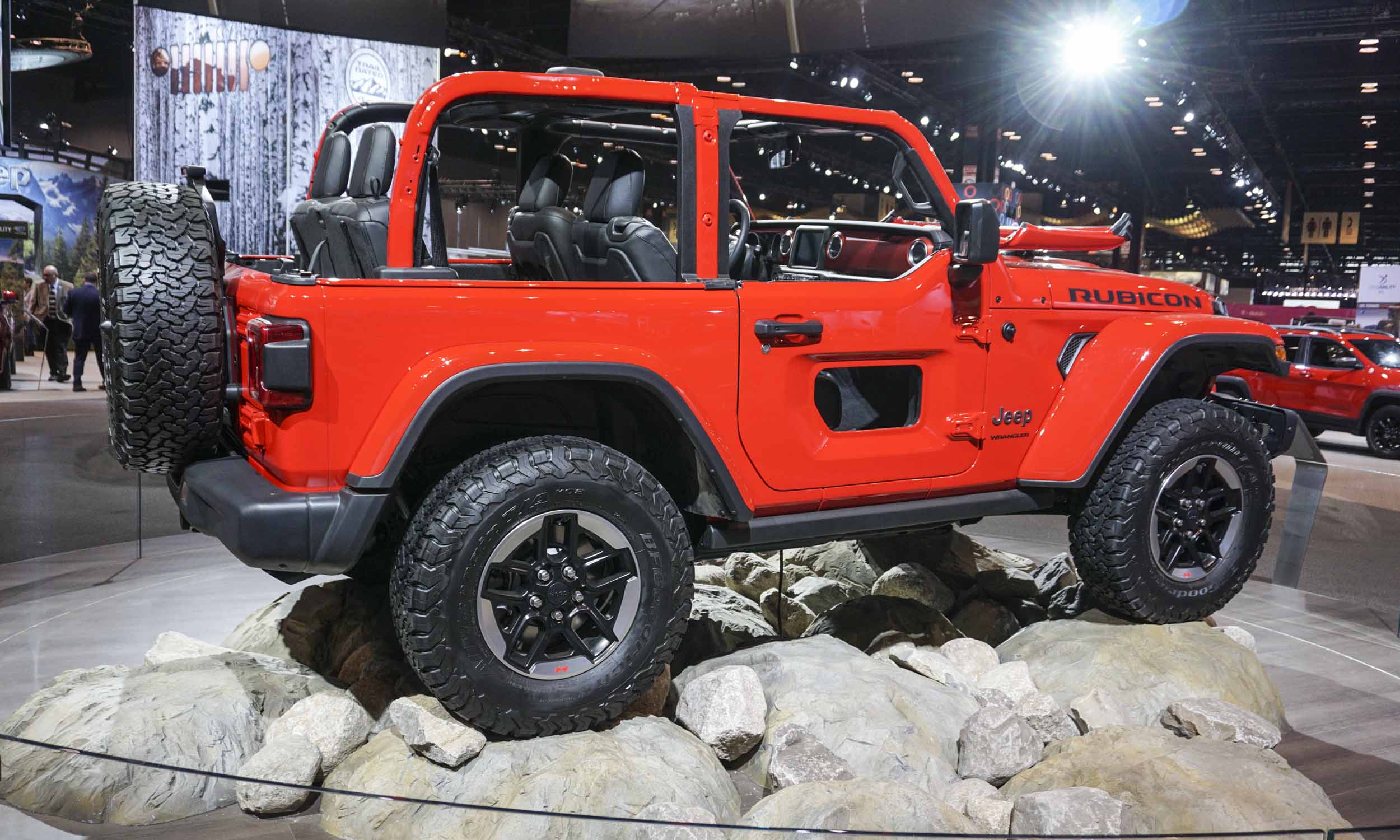 Jeep Wrangler
Overall the new Wrangler body is more aerodynamic, and the windshield can still be folded flat to the hood. Two hardtops, a new Sunrider soft-top and a new Sky One-Touch power top, are offered. Both 2-door and 4-door versions are available in Sport, Sport S, Rubicon and Sahara trim levels. The 2018 Wrangler continues to have advanced off-road capability with two 4-wheel-drive systems and — for the first time — a 2-speed transfer case with full-time 4-wheel drive. Three engines will be available starting with the 285-horsepower 3.6-liter V6, a new 270-horsepower turbocharged 4-cylinder and a 3.0-liter EcoDiesel with 442 lb-ft of torque that will arrive in 2019. 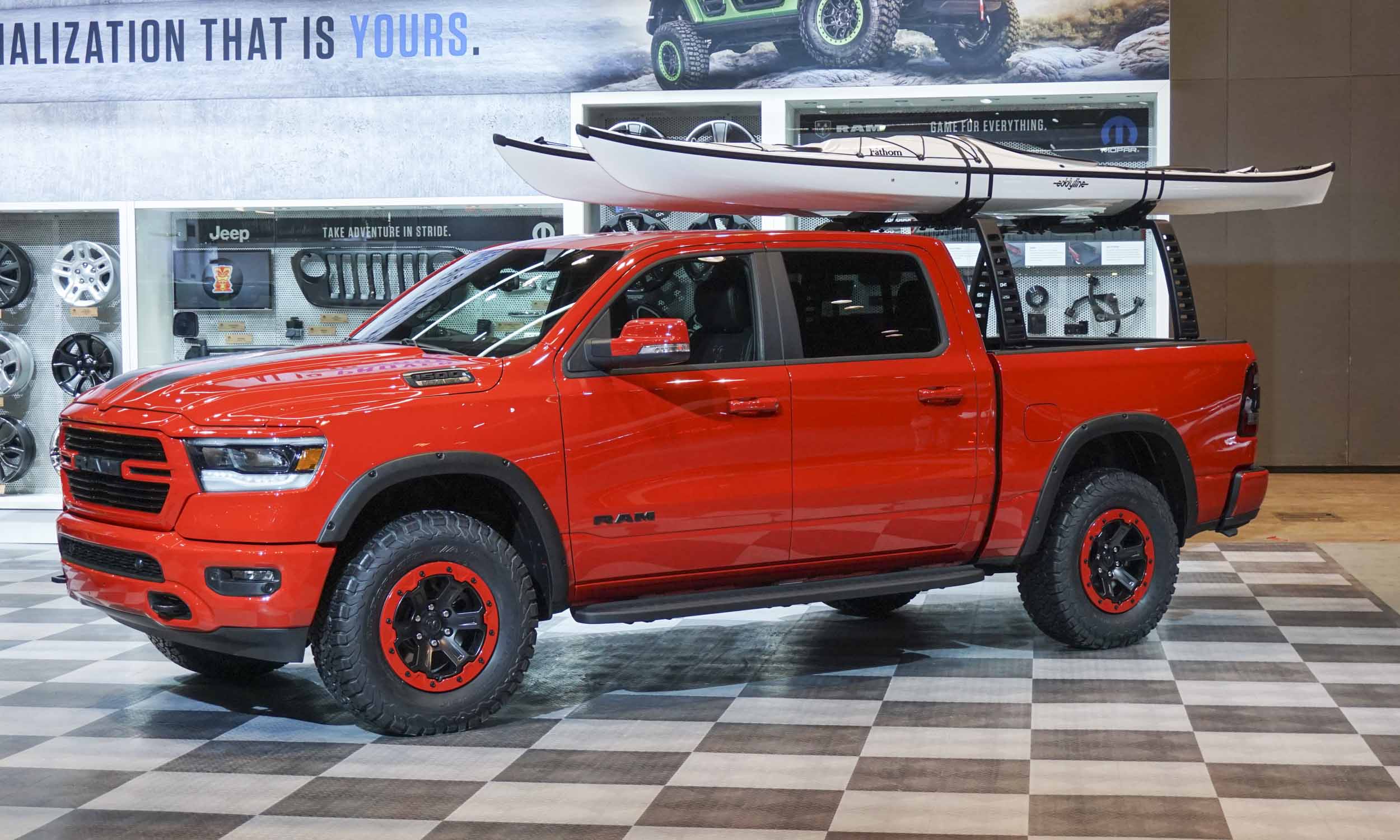 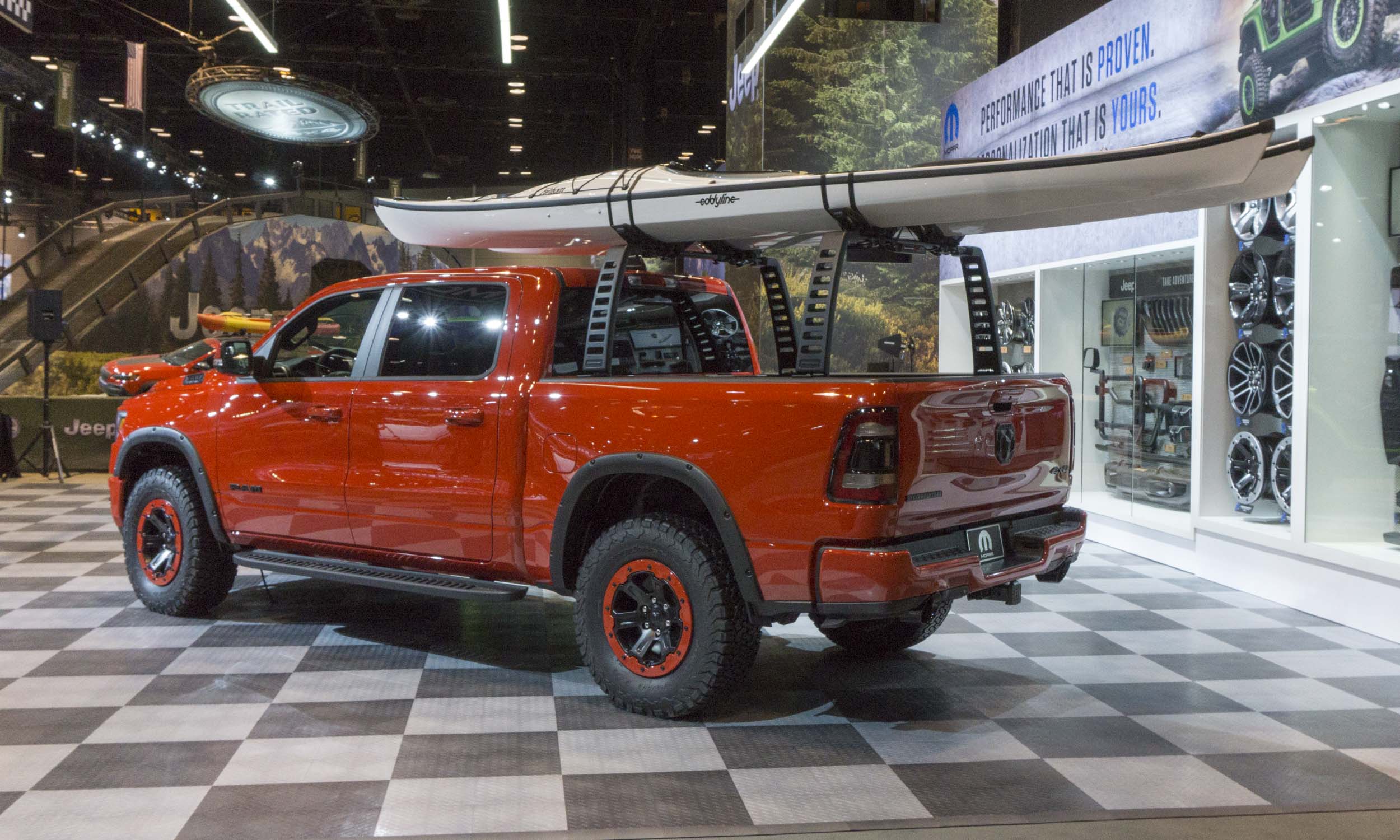 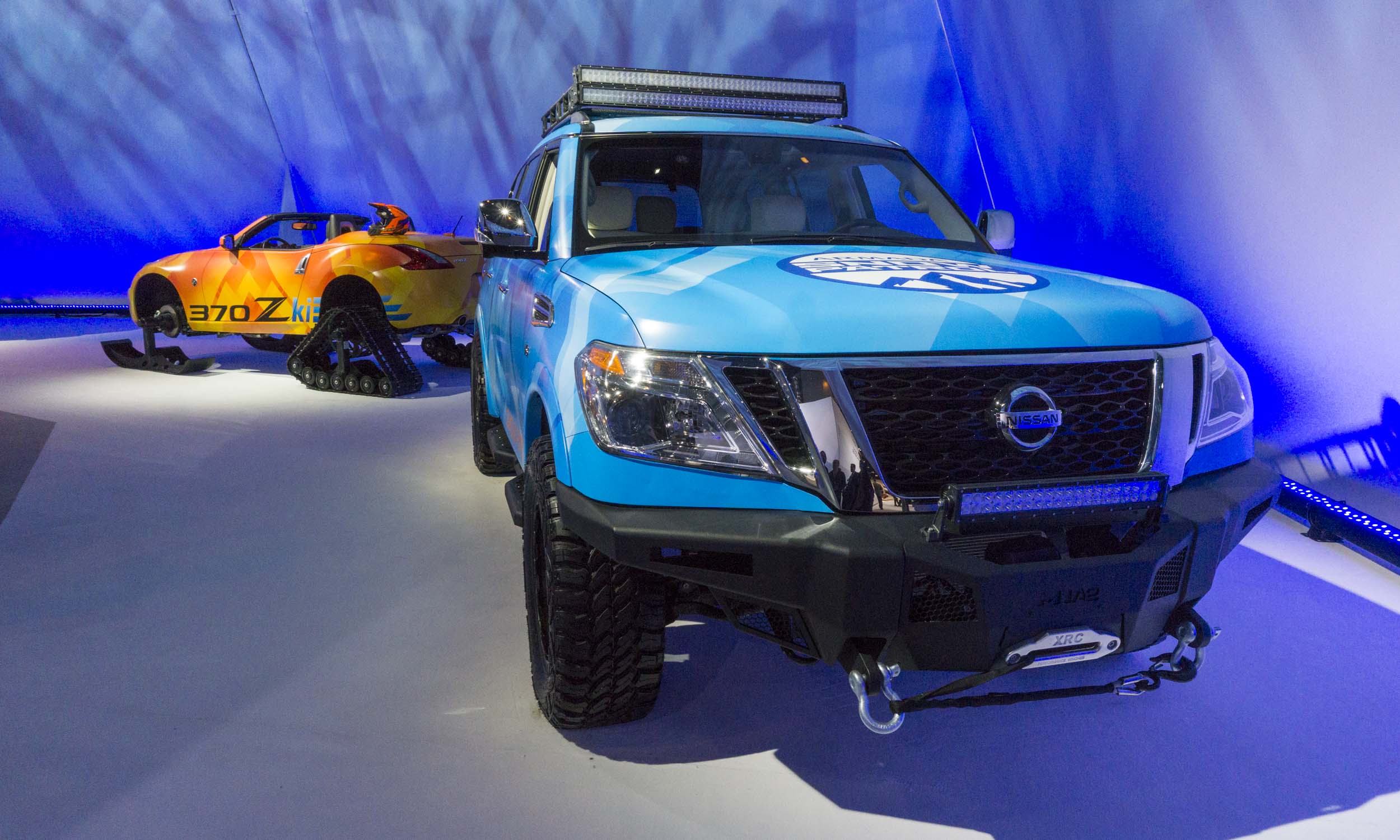 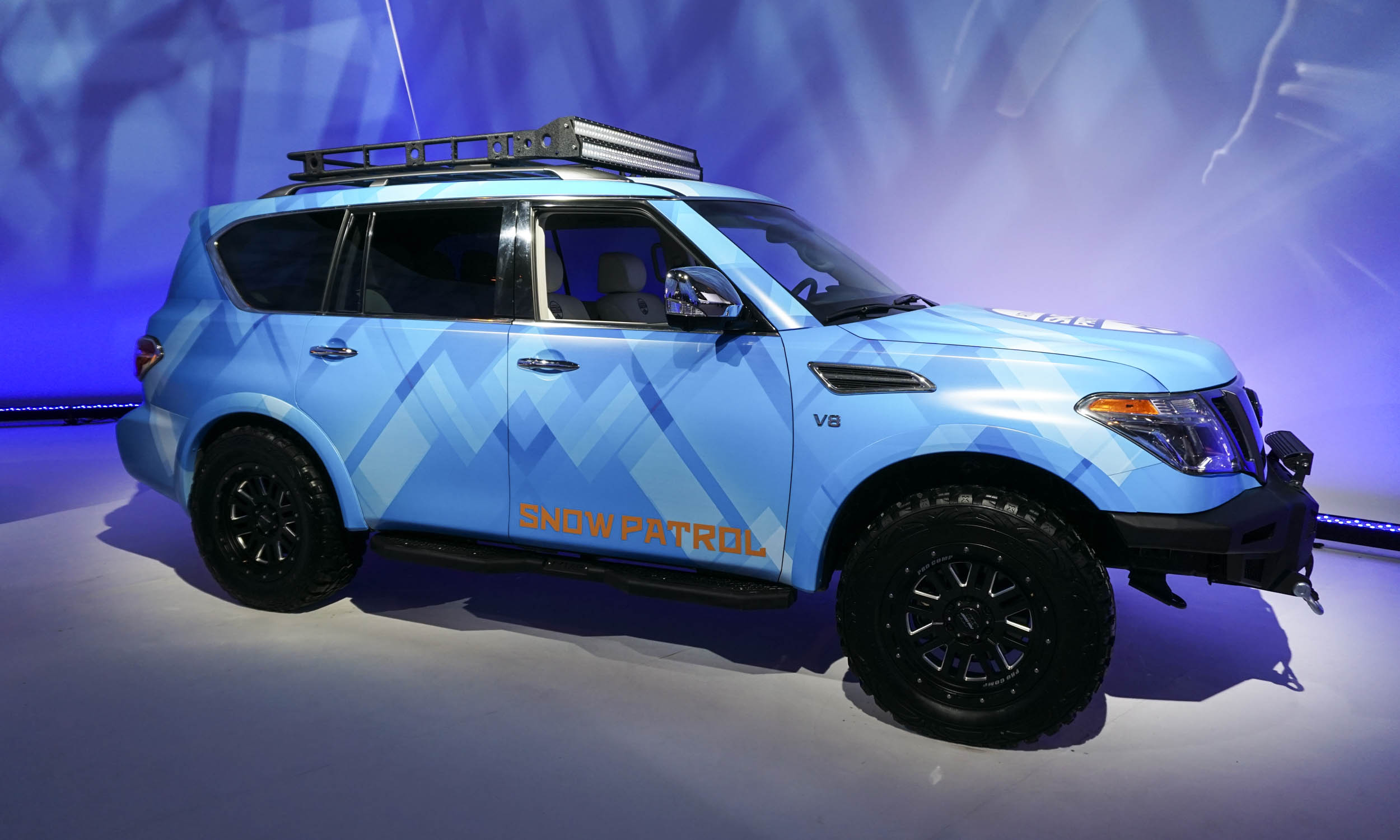 Nissan Armada Snow Patrol
Up front, the Snow Patrol gets a larger front bumper with a grille protector bar and a winch mount supporting a 12,000-pound-capacity winch. A roof rack and light bar with double-row LEDs with flood and spot capabilities adorn the roof, complemented by an LED light bar mounted to the grille. Running boards and rock sliders complete the look and protect the side rails in extreme off-road conditions. Inside, the front seats are covered in premium Katzkin leather in Pearl with Cement-colored perforated inserts, Cobalt accents and the Armada Snow Patrol logo. The exterior features an Armada Snow Patrol graphic body wrap. 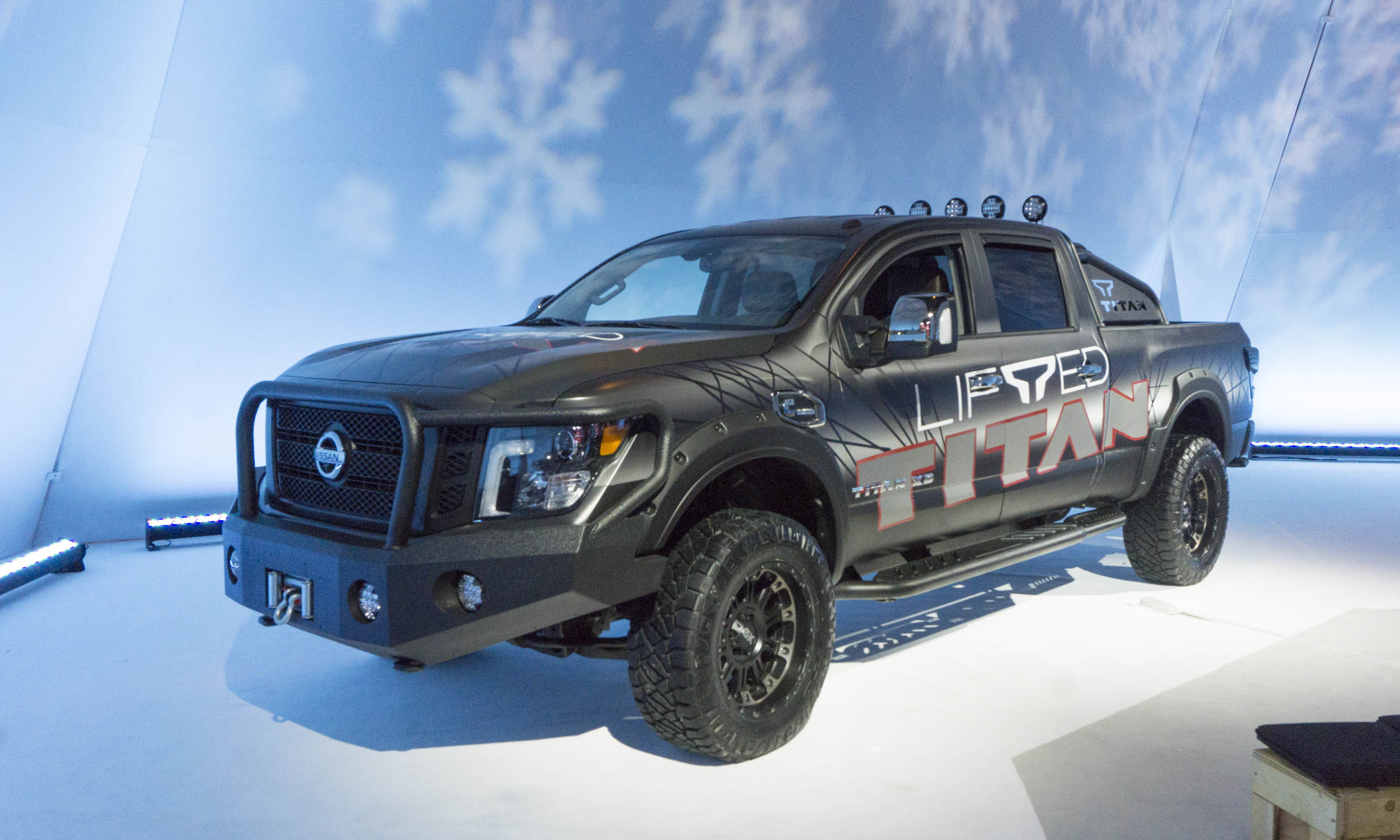 Nissan Titan Lift Kit
Nissan now offers a new ICON Vehicle Dynamics suspension lift kit for both Titan and Titan XD. Available through Nissan dealers, the suspension mods do not require any cutting or drilling and installs in less than four hours. The factory-authorized ICON lift kit provides a more aggressive appearance and increased ground clearance with a suspension lift of up to three inches; the modifications do not void the factory warranty. The ICON kit includes adjustable-height coil-over shock absorbers tuned specifically for TITAN and TITAN XD, custom rod-end bearings and patent-pending Delta Joints. 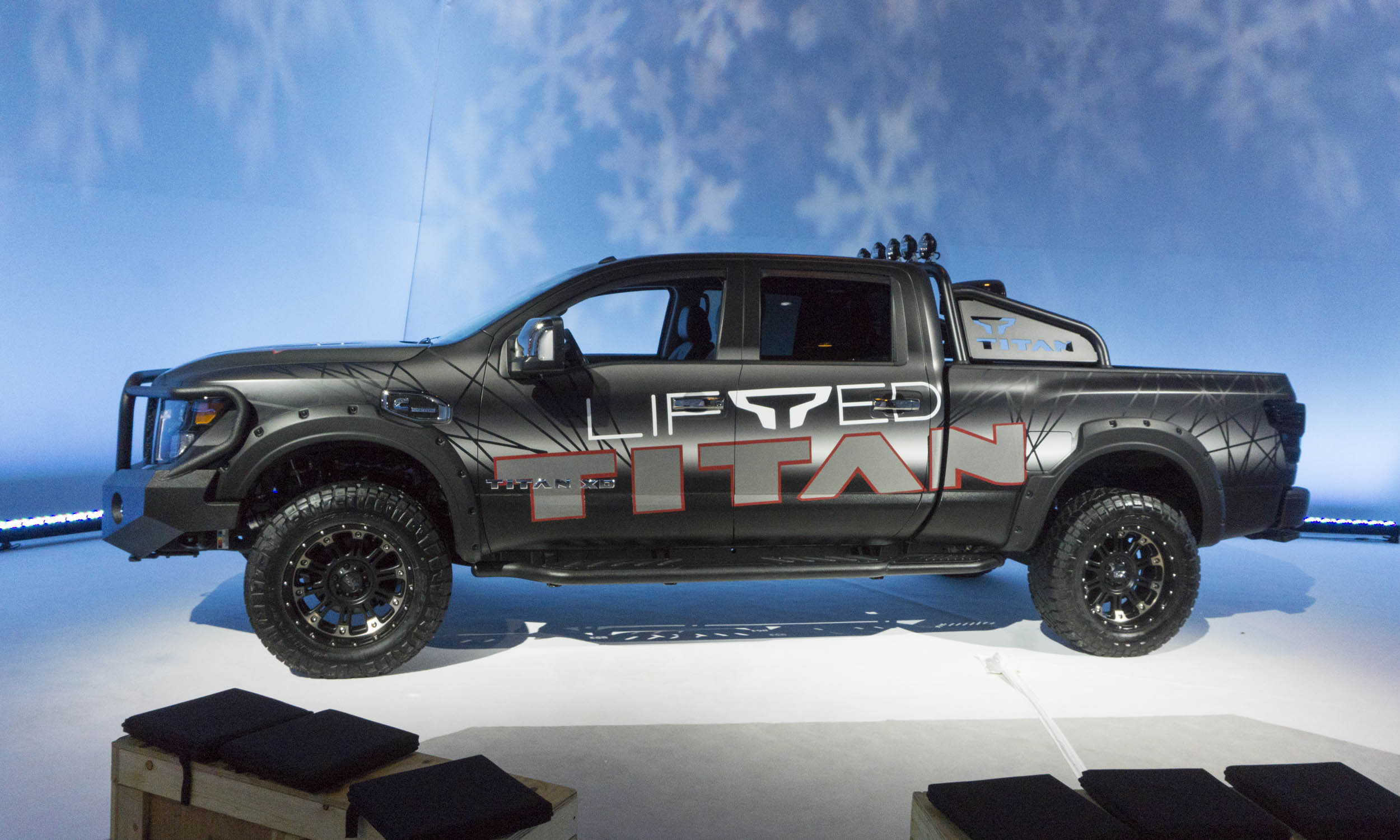 Nissan Titan Lift Kit
The Nissan Titan is already the most accessorized vehicle in the Nissan lineup. “We worked with ICON, a proven name in suspension lift-kit engineering, to develop the first kits to be offered through our Nissan dealer network,” said Billy Hayes, division vice president, LCV and Trucks, Nissan North America, Inc. “With the suspension lift kit’s increased wheel travel and damping ability, ride quality should be enhanced both off-road and on,” added Hayes. “TITAN and TITAN XD are the most accessorized models in the entire Nissan lineup and the ICON kits are a great addition,” Hayes noted. 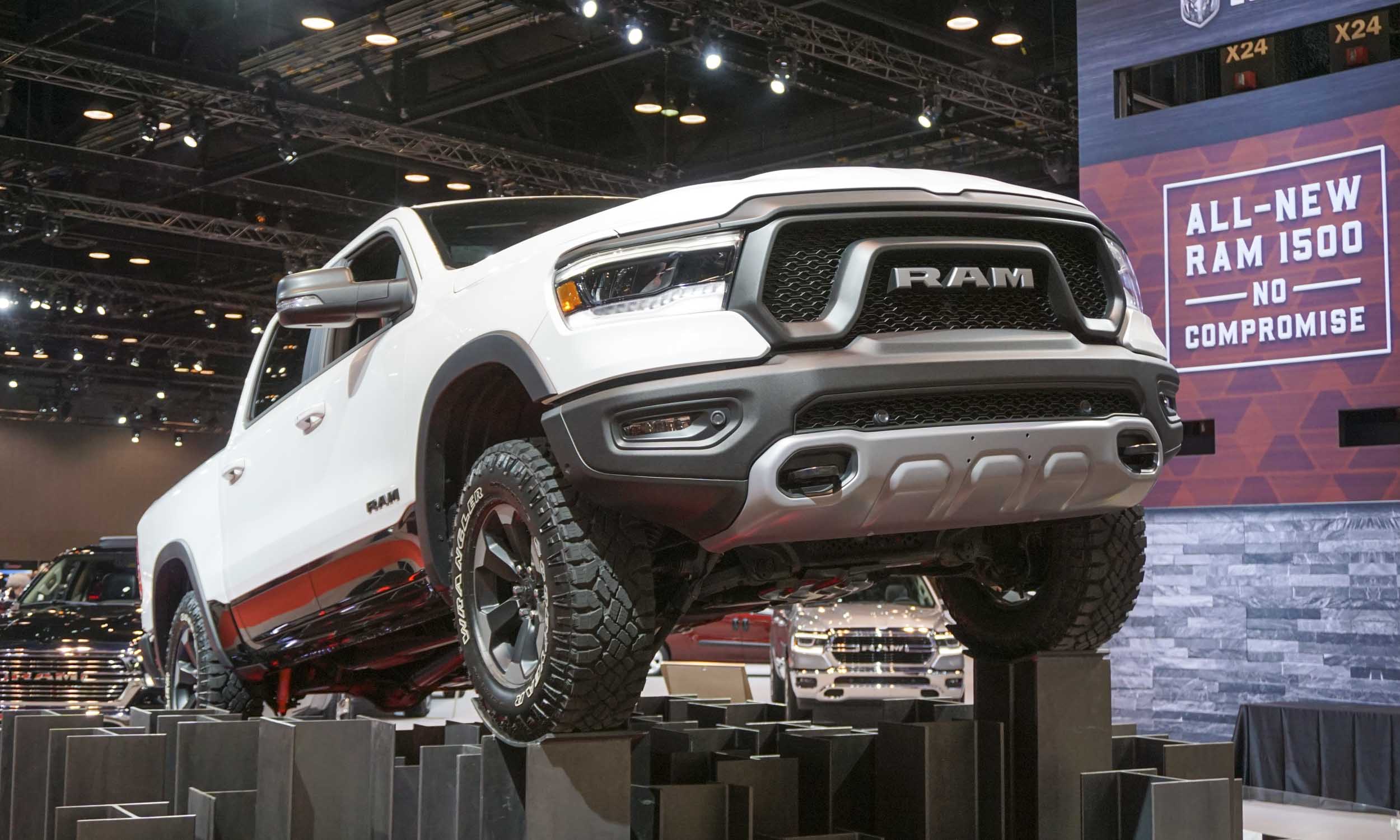 2019 Ram 1500
One of the hits of the 2018 Detroit Auto Show in January, the all-new 2019 Ram 1500 garnered a lot of attention in Chicago as well. The number three best-selling vehicle in America for 2017 behind its rival Ford F-Series and Chevrolet Silverado, the all-new Ram 1500 mounts a new challenge. The 2019 Ram offers more capability, better fuel economy and an impressively innovative interior. The new design is more aggressive with a forward-leaning grille (offered in six styles) and a raised aluminum hood with engine badges on the sides. Fog lights get pushed to the outer corners and three different headlights are offered: halogen, full LED and full LED with an Adaptive Front Lighting System. Up front is an air dam that automatically lowers at 35 mph to improve airflow, active grille shutters and an optional air suspension that lowers the truck at highway speeds. 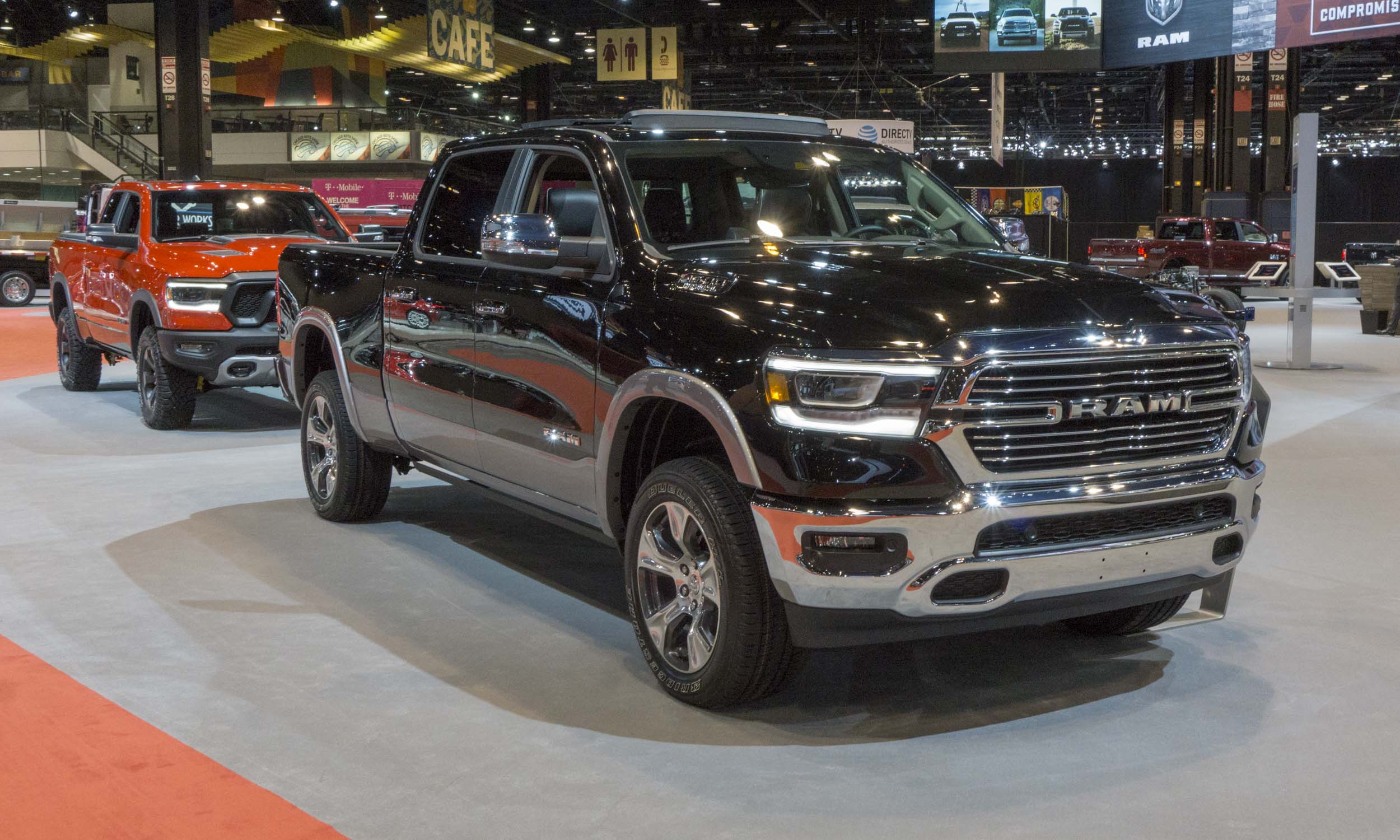 2019 Ram 1500
The new Ram will be available in either Quad Cab or Crew Cab configuration with interior options from vinyl to premium leather. The Ram will be initially available with either a 305-horsepower 3.2-liter Pentastar V6 engine or a 395-horsepower 5.87-liter HEMI V8 powertrain, and both will be equipped with the eTorque mild hybrid system, which adds up to 90 lb-ft of torque for the V6 and 130 lb-ft for the HEMI. This system combines a belt-driven motor generator unit with a 48-volt battery for seamless start / stop function, a short-duration torque boost to the driveline and brake energy regeneration. Both engines are teamed with an electronic TorqueFlite 8-speed automatic transmission. 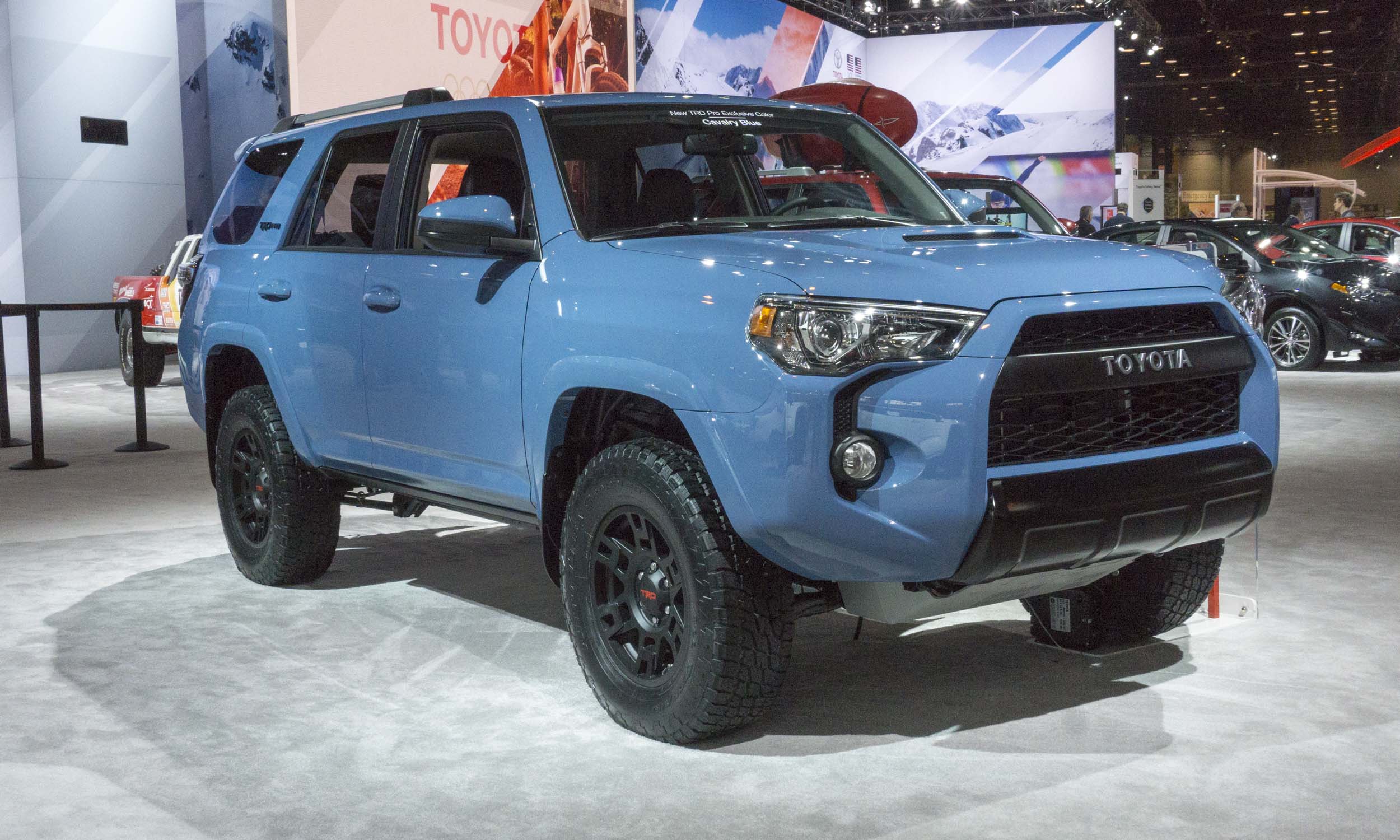 Toyota 4Runner TRD Pro
Toyota debuted three new 2019 TRD Pro 4×4 models in Chicago, starting with the 4Runner TRD Pro, featuring Fox shocks and off-road equipment developed by Toyota Racing Development. The TRD Pro lineup first debuted in 2014, bring styling, equipment and capability from Toyota’s off-road and racing history. The 2019 TRD Pro models will be available in the fall of 2018 in three color choices: Super White, Midnight Black Metallic or Voodoo Blue. The Toyota 4Runner is a legendary off-road vehicle and continues to be one of the most capable off-road production vehicle available. The TRD Pro adds 2.5-inch Fox shocks front and rear combined with a larger front sway bar and TRD-tuned front springs that provide an additional one inch of front lift. 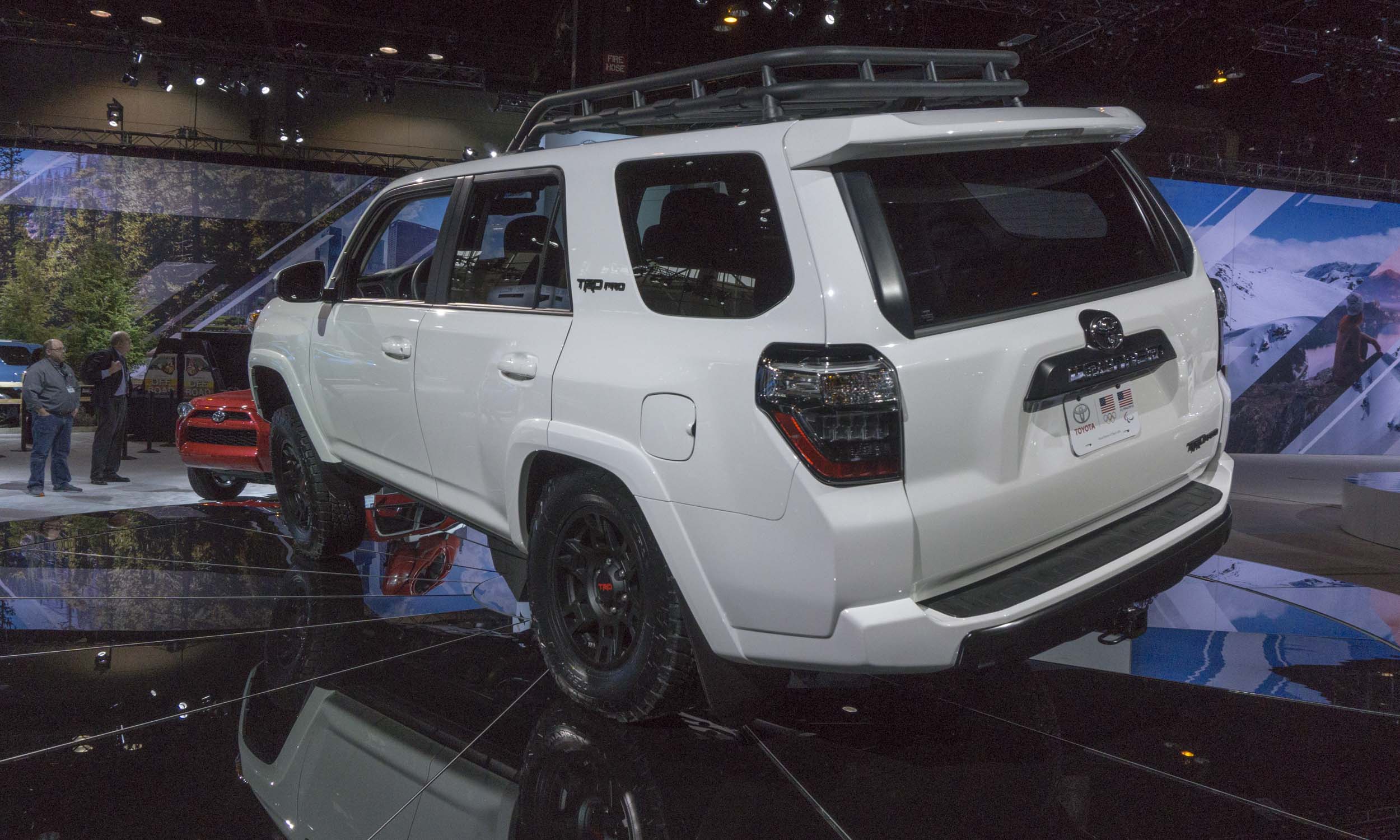 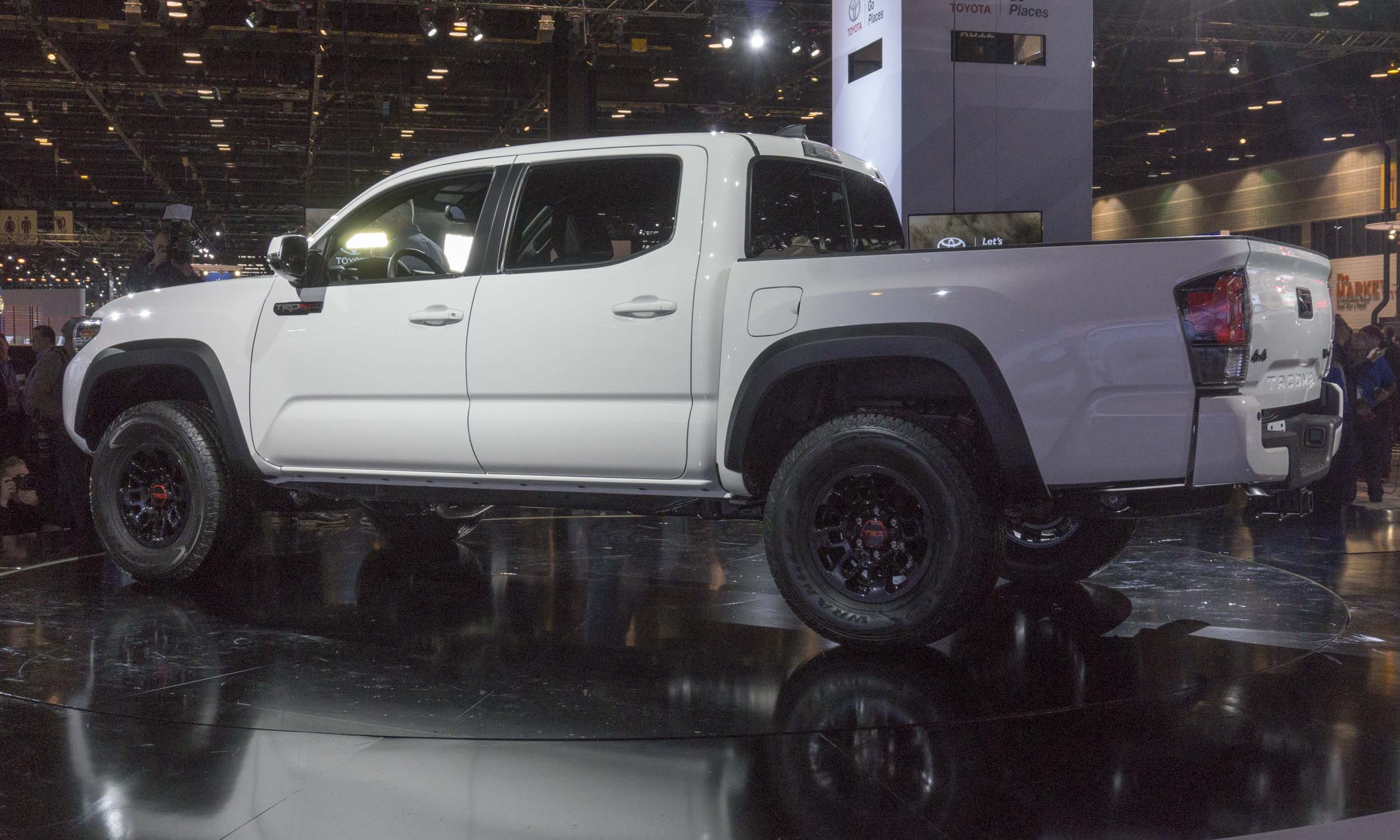 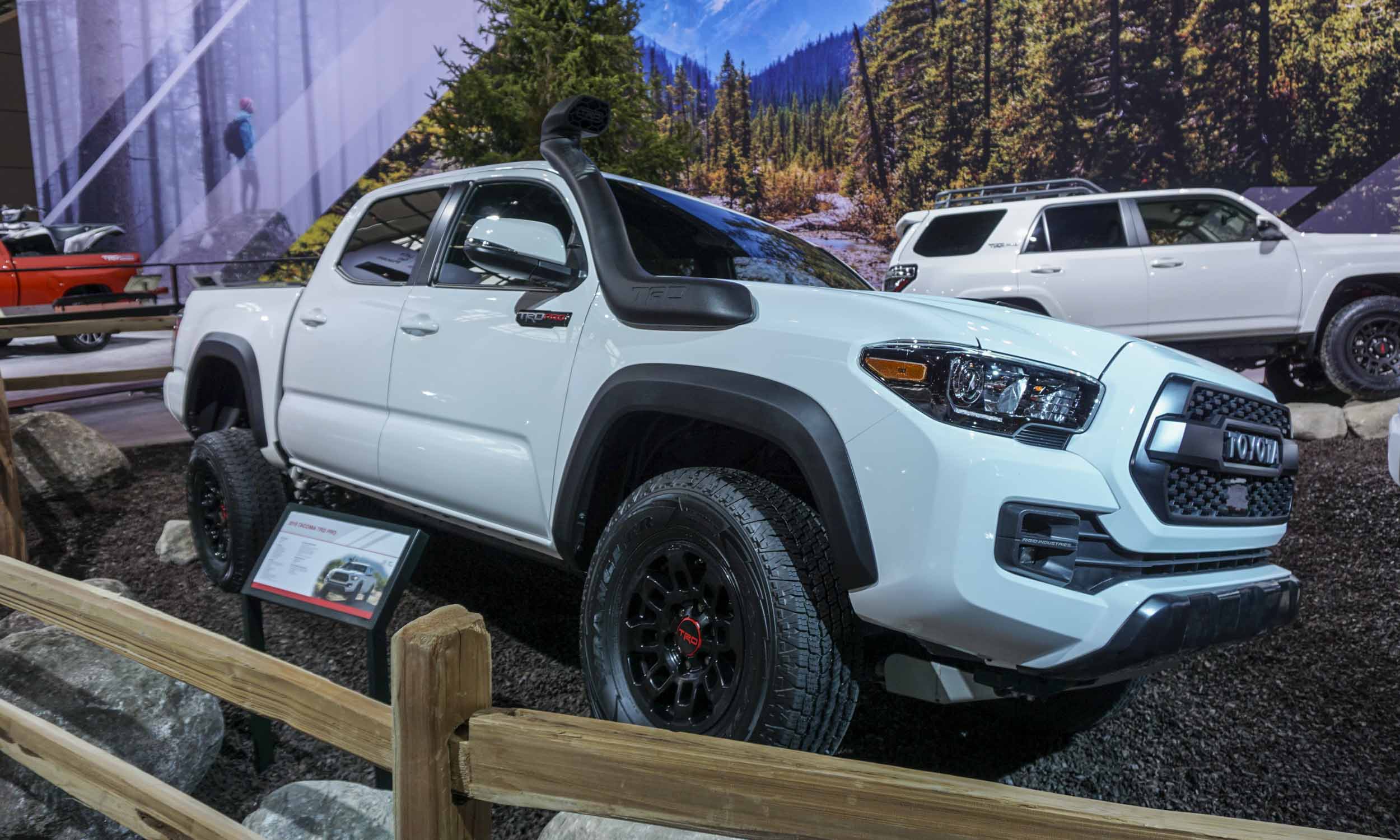 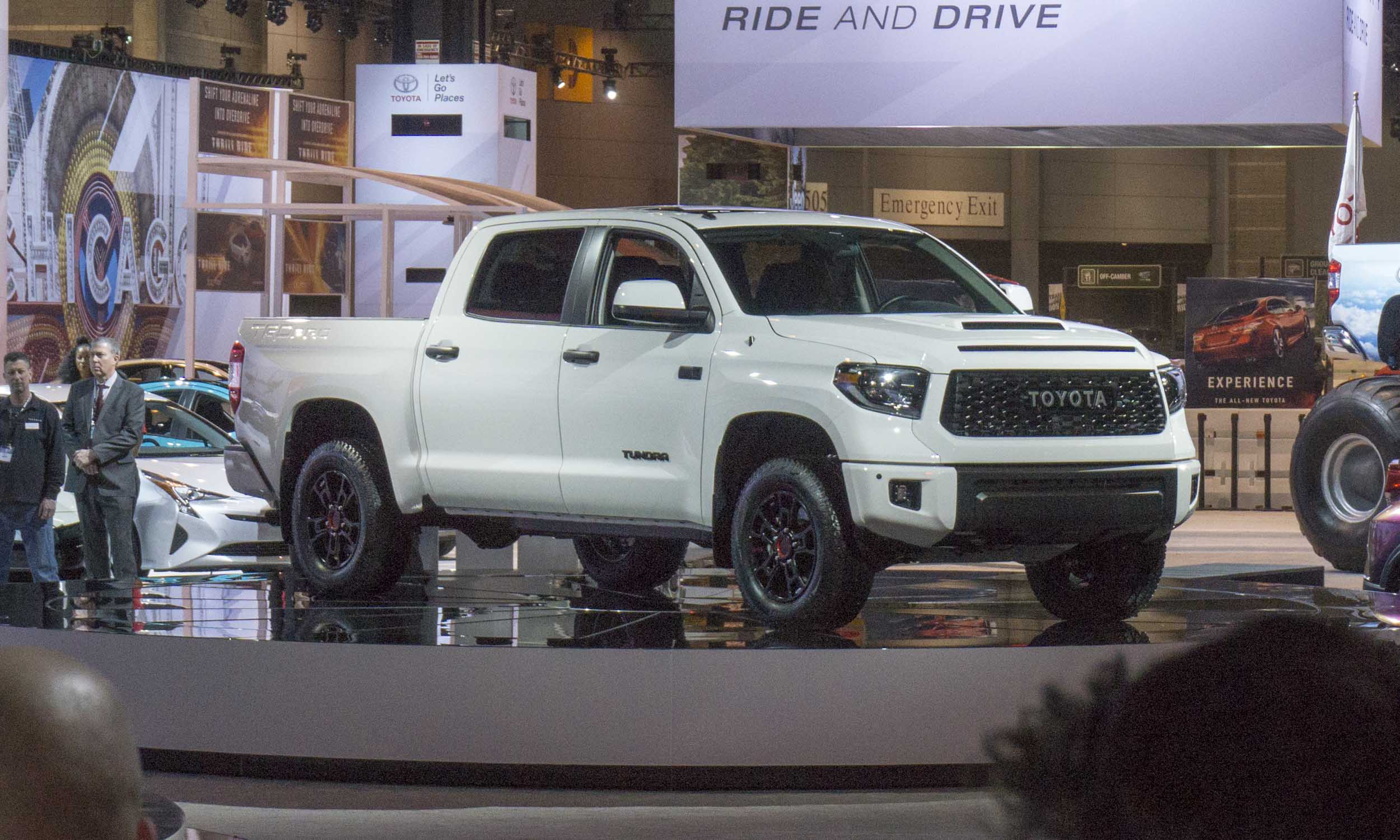 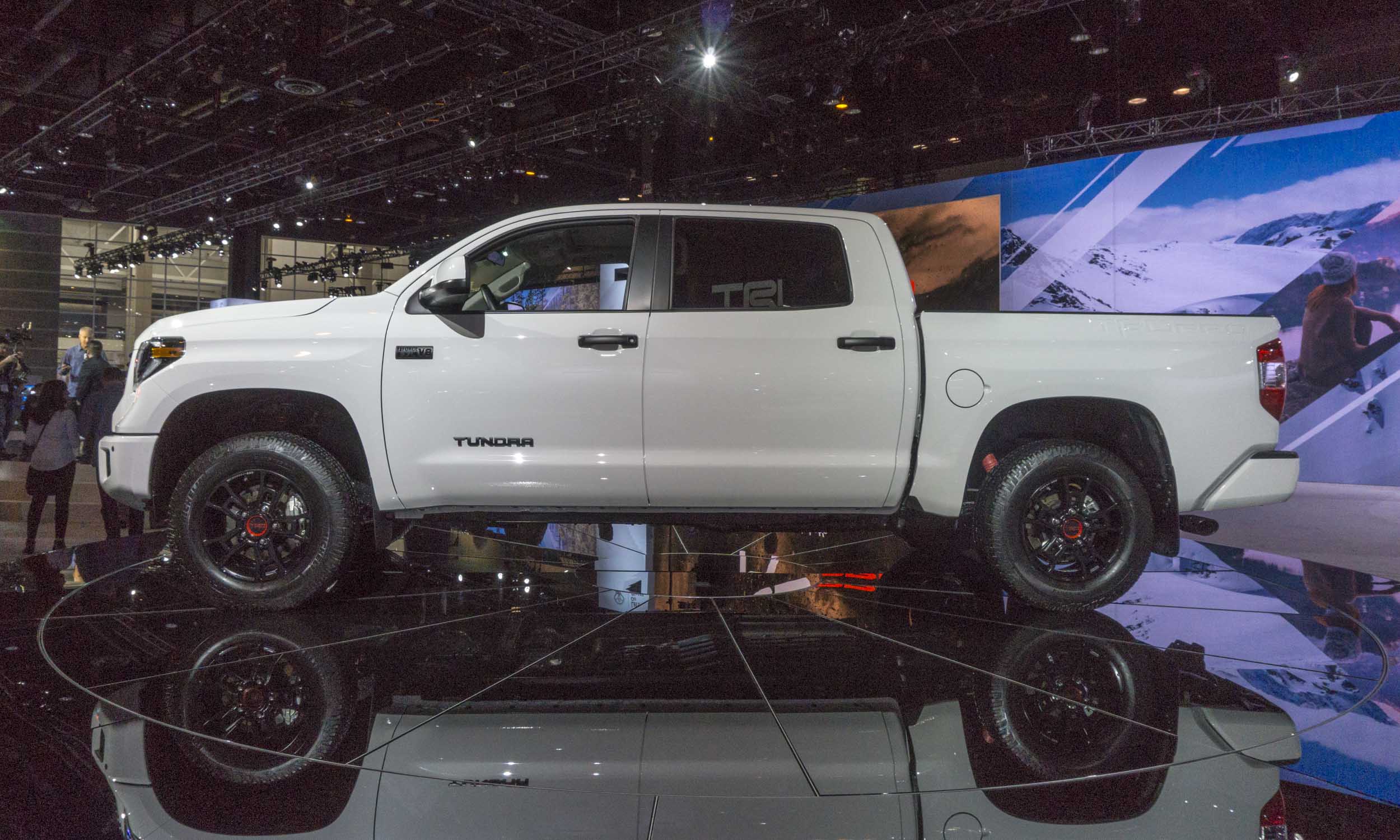