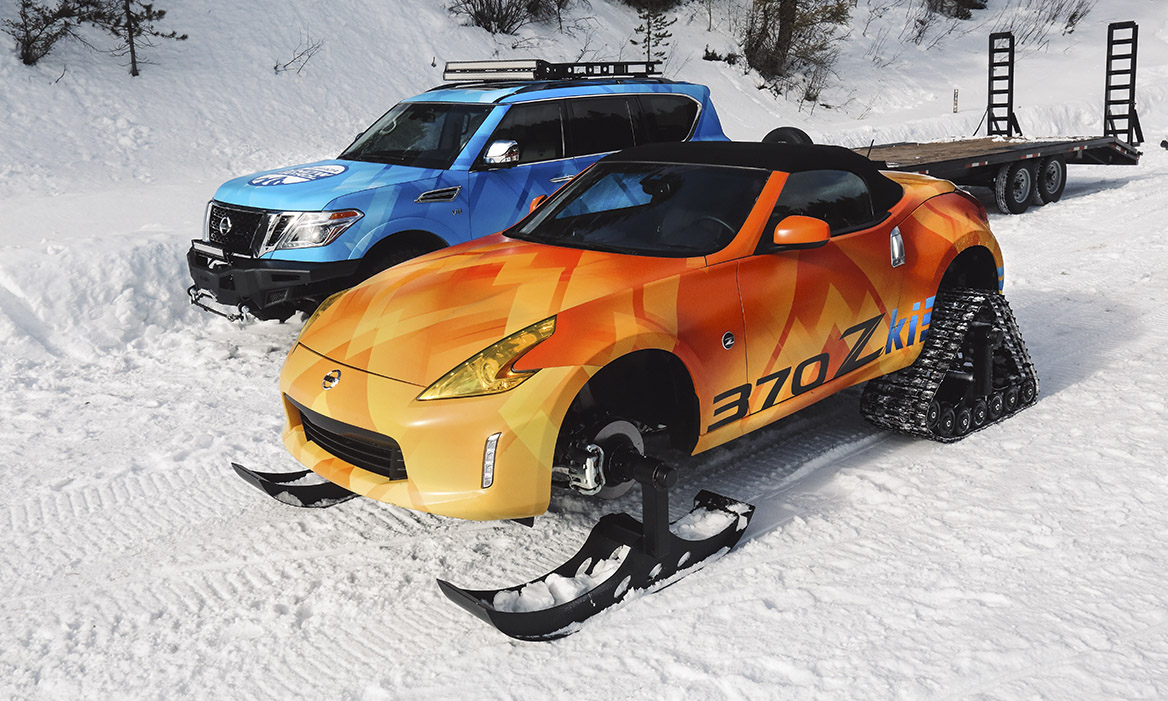 Brightening Winter
Anyone who has spent a winter in Chicago knows that by February the weather becomes simply tiresome. After months of snow and cold, most residents are pining for warmer temps, ready to rid themselves of winter doldrums. Although unable to change the weather, Nissan was able to inject a bit of fun into the 2018 Chicago Auto Show by premiering two snow-ready concept vehicles: the Nissan 370Zki and the Nissan Armada Snow Patrol. 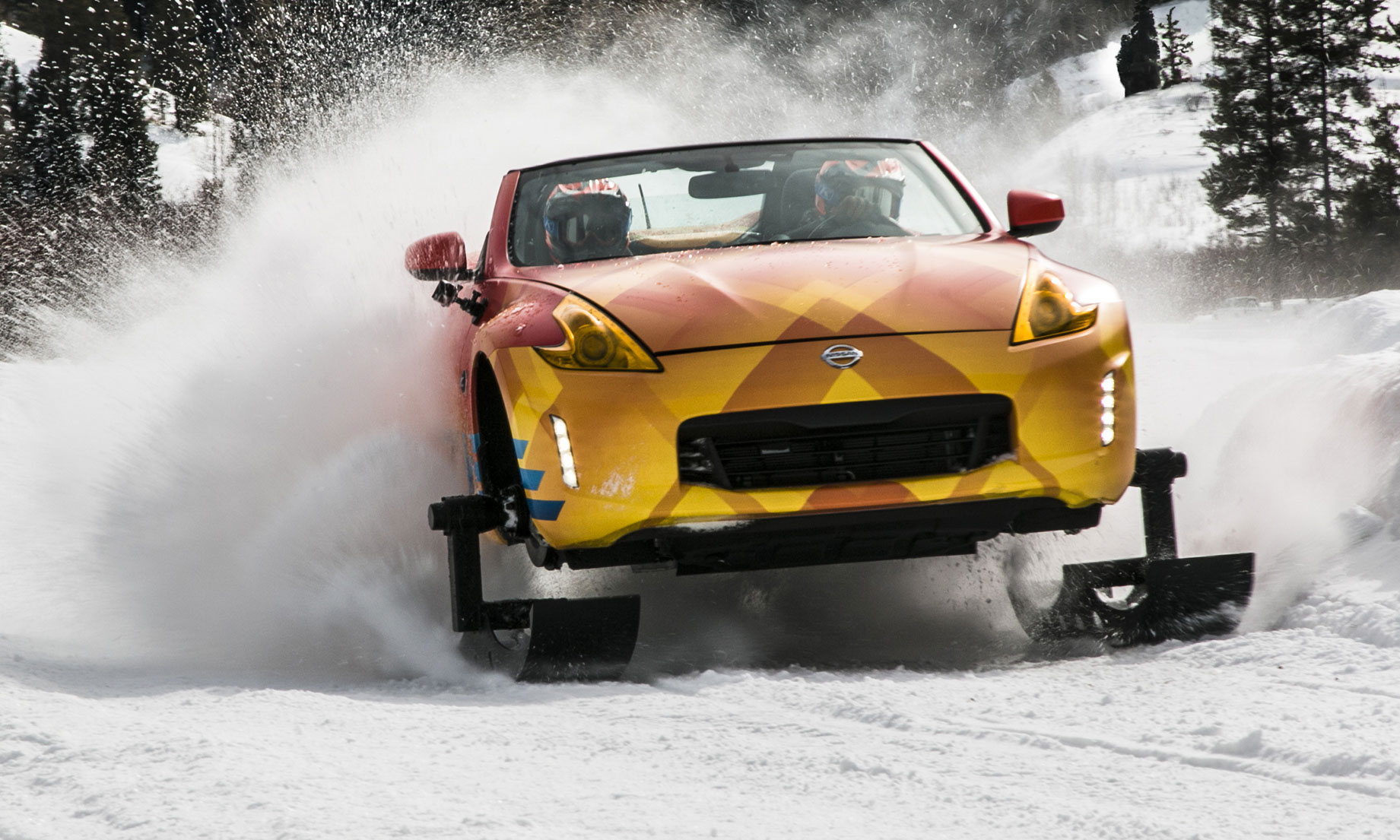 Ultimate Snow Mobile
The 370Zki started life as Nissan’s 370Z Convertible which is already great fun to drive, especially with the top down and a winding road ahead. But this special snow-going Zki trades high-performance rubber for skis and tracks, converting it into the ultimate snow mobile. 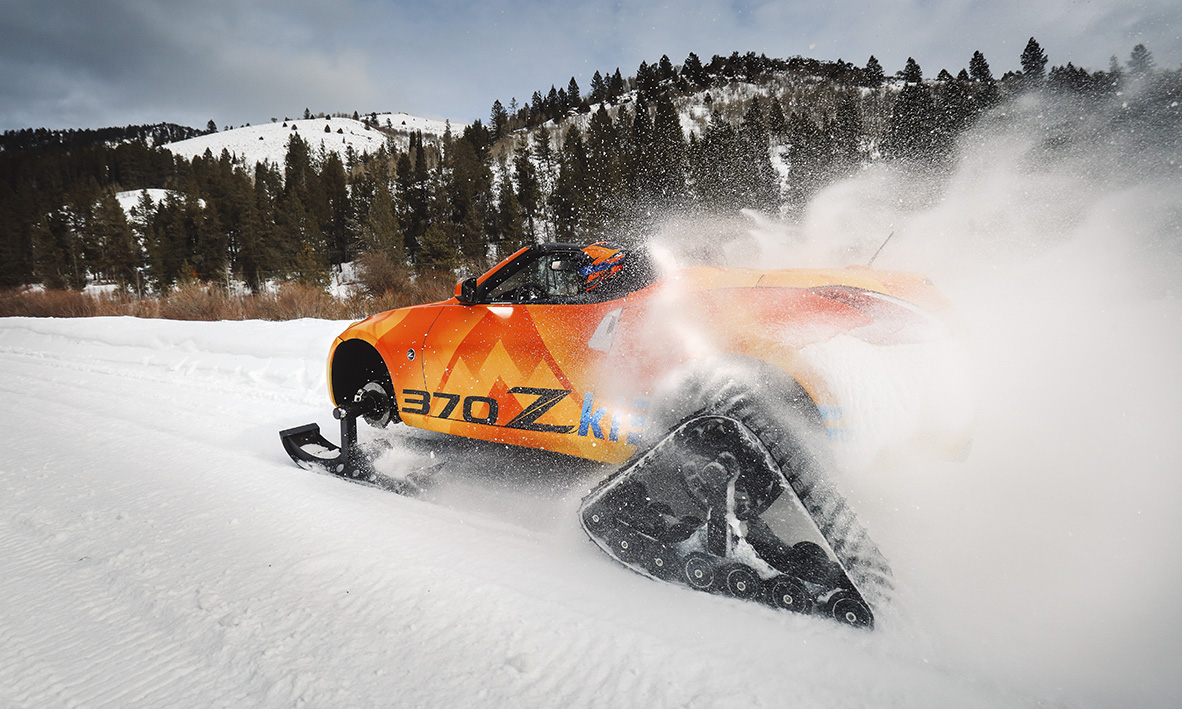 Nissan 370Zki
“The Nissan 370Zki continues our recent tradition of bringing imaginative winter vehicle concepts to the Chicago Auto Show. With the Nissan Z’s long heritage of motorsports competition, the 370Zki seemed like a natural combination,” said Michael Bunce, vice president of product planning at Nissan North America. “Prior to its debut here in Chicago, we put the 370Zki through its paces on the slopes in Wyoming where its performance heritage really came through.” 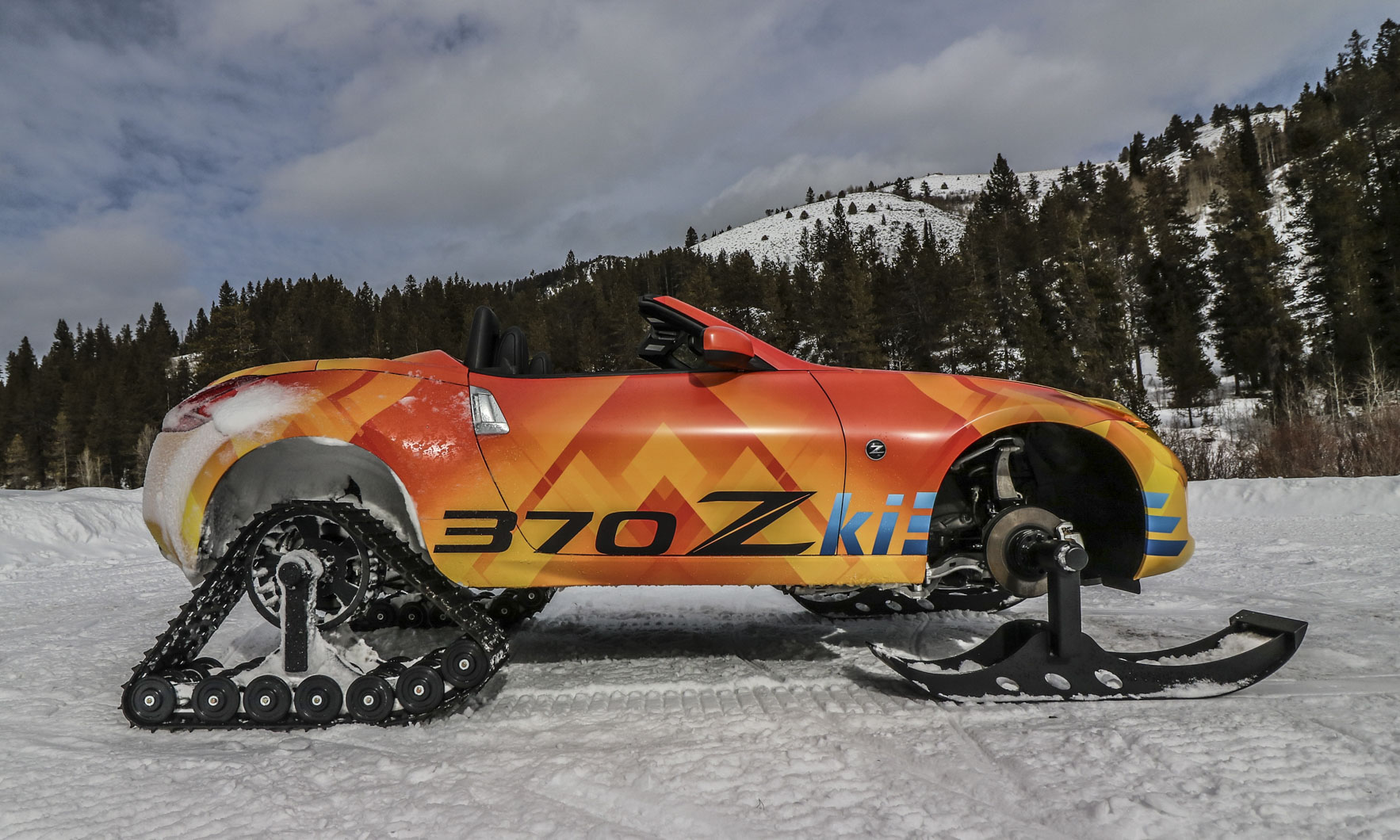 Extensive Transformation
A lot of ingenious work went into transforming Nissan’s Z-car into this one-off 370Zki concept. The entire drivetrain had to be removed before fitting the sports car with a 3-inch lift kit for added ground / snow clearance. The Zki retains its factory brakes, but the brake lines had to be rerouted and the exhaust system modified so they would fit under the vehicle. The rear fenders also underwent modifications to make room for 4-foot-long snow tracks. 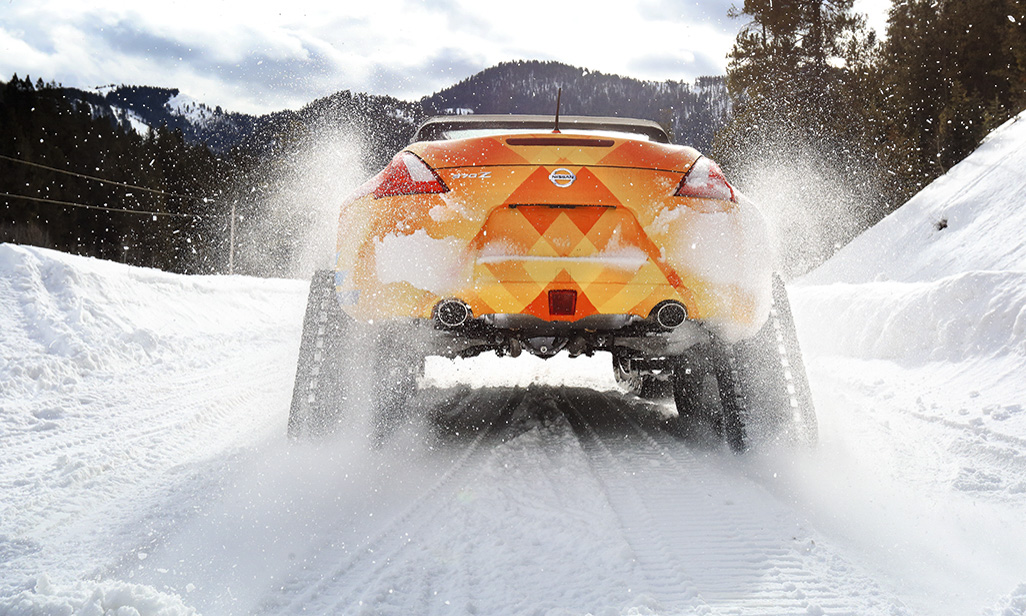 Skis and Tracks
Up front, additional suspension mods allow steering via skis mounted to the front hubs. The engine and transmission also had to be custom-mounted, and a front skidplate protects the undercarriage from damage in deep snow. Both the skis and tracks come from American Track Truck. 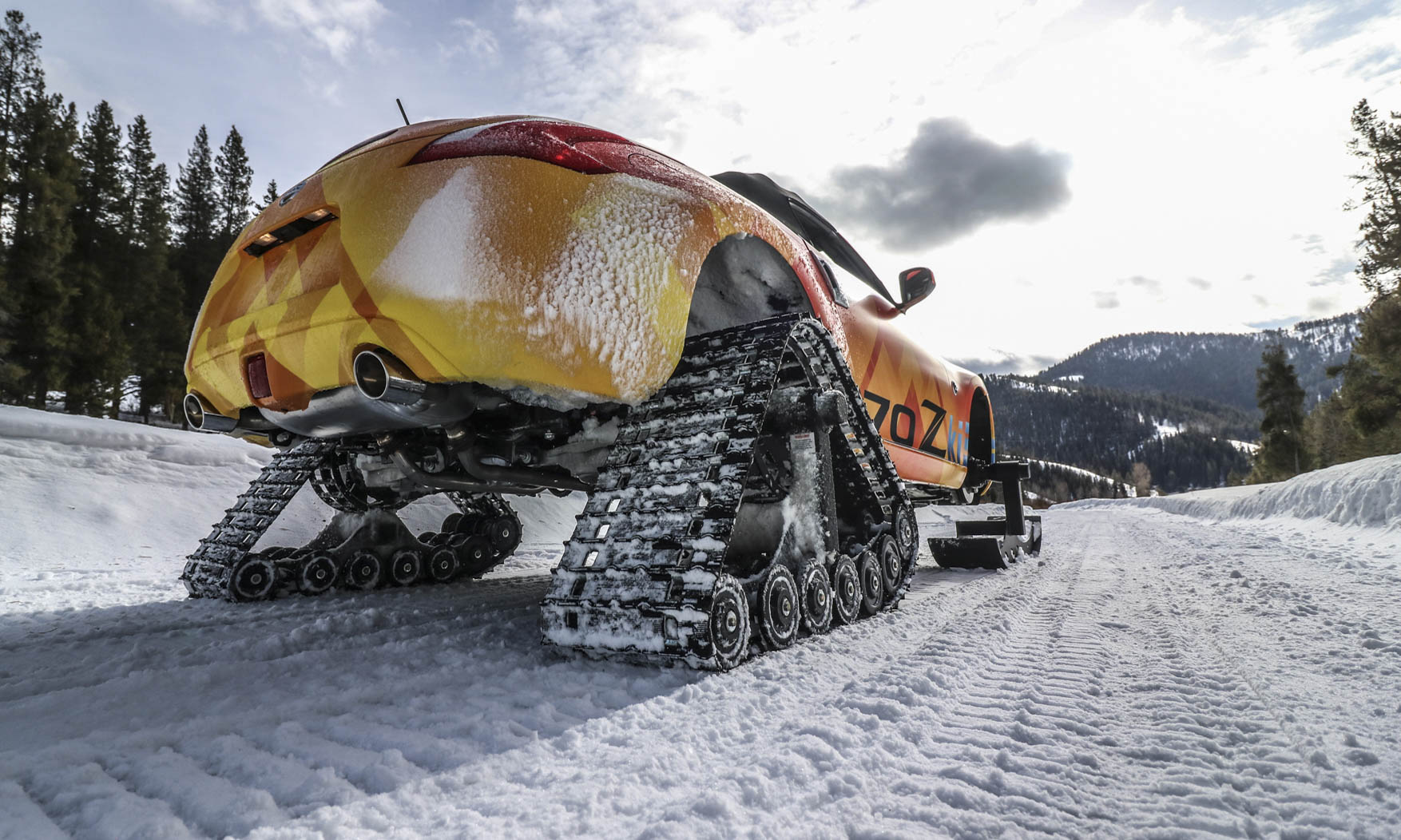 Powerful
The Nissan 370Zki is equipped with the 3.7-liter V6 engine generating 332 horsepower, directed to the rear tracks via a 7-speed automatic transmission. 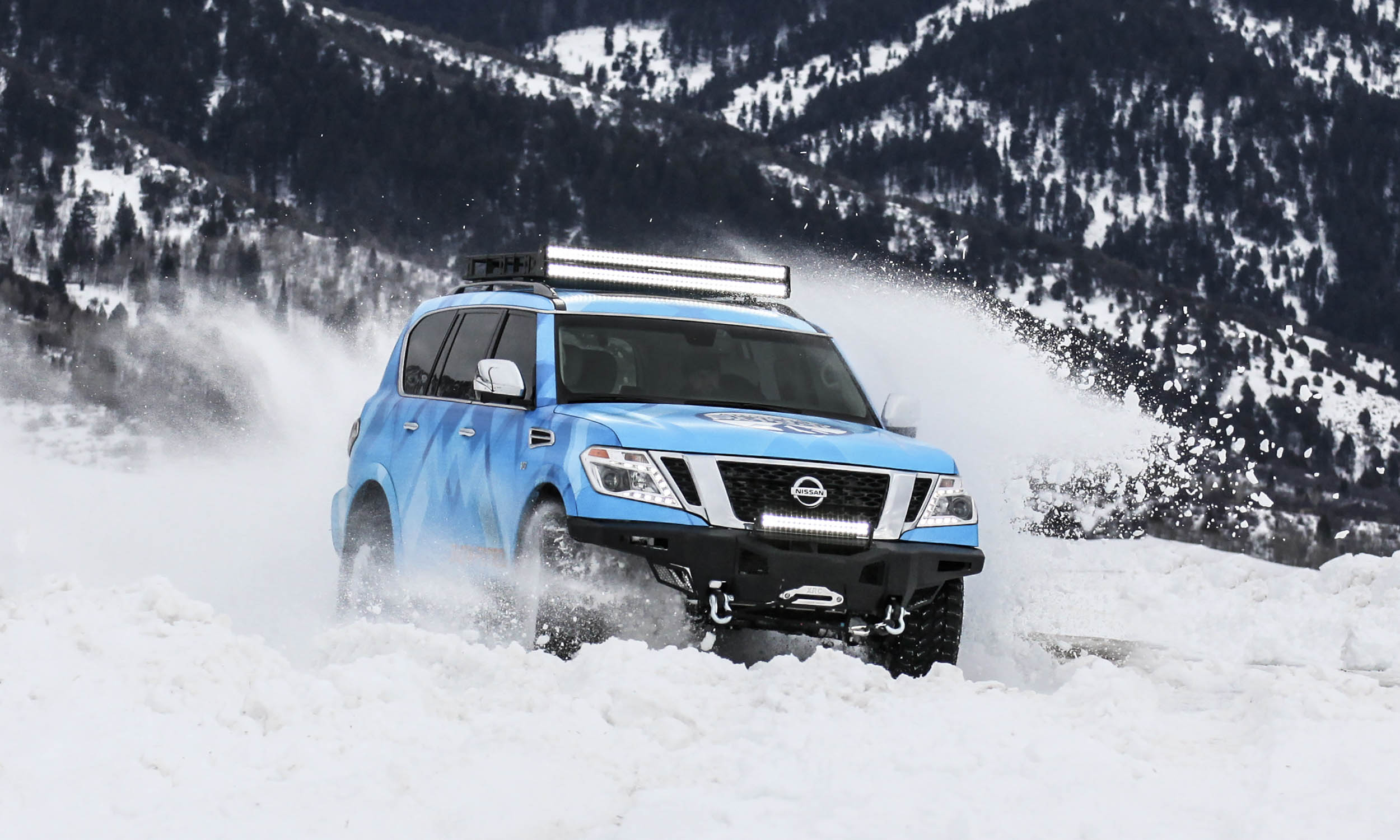 Armada Snow Patrol
Since the 370Zki isn’t designed for on-pavement use, there may be an occasion when it needs to be hauled to where the snow flies. And that’s where the Armada Snow Patrol comes in, since it’s able to put rubber to winter roads as needed. 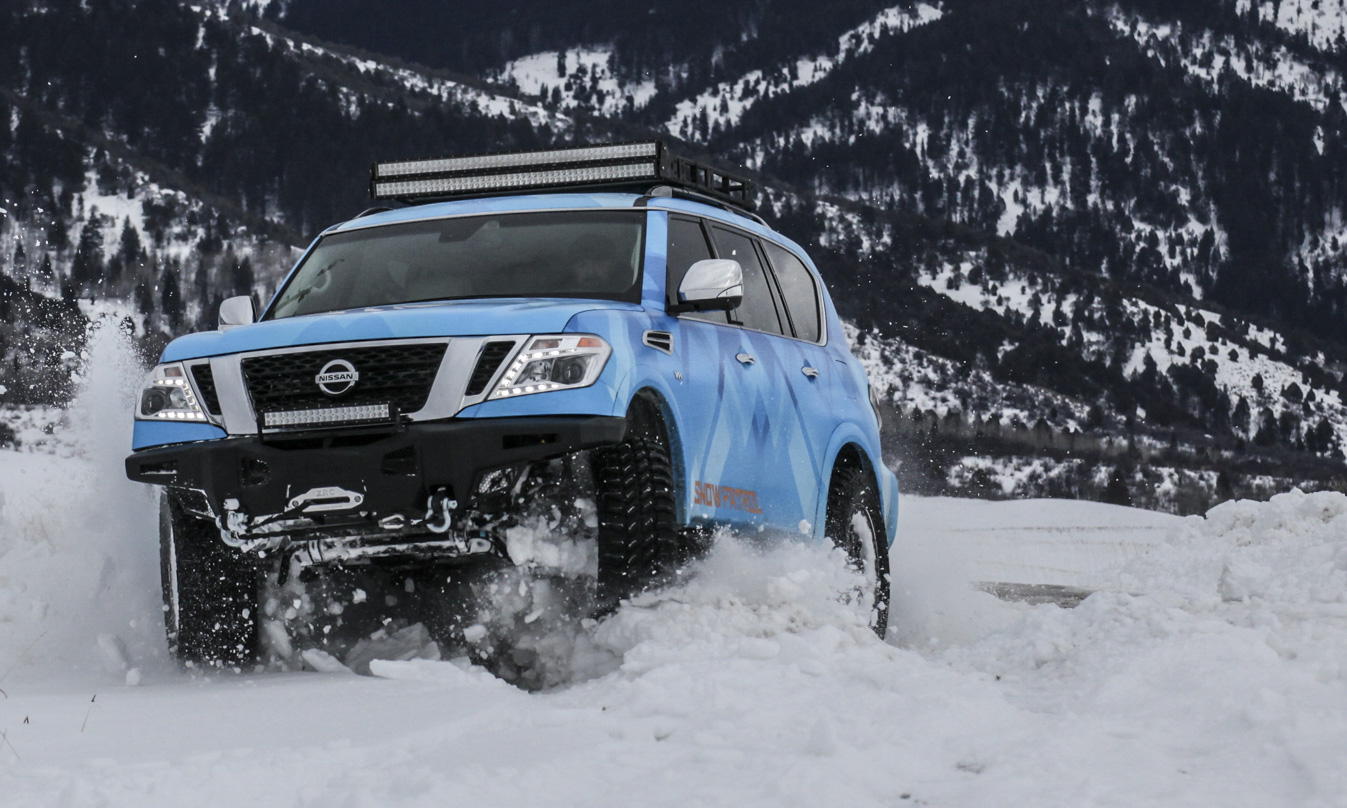 Proper Off-Roader
“While the 2018 Armada drives like a luxury sedan, it has a long off-road heritage as the Nissan Patrol, a global expedition vehicle,” said Billy Hayes, division vice president of commercial vehicles and trucks at Nissan North America. “As part of our celebration of winter at the Chicago Auto Show, we wanted to remind our growing family of Armada owners and enthusiasts that this full-size SUV stands ready to take you to the mountains, or at least safely through Chicago streets covered in lake effect snow.” 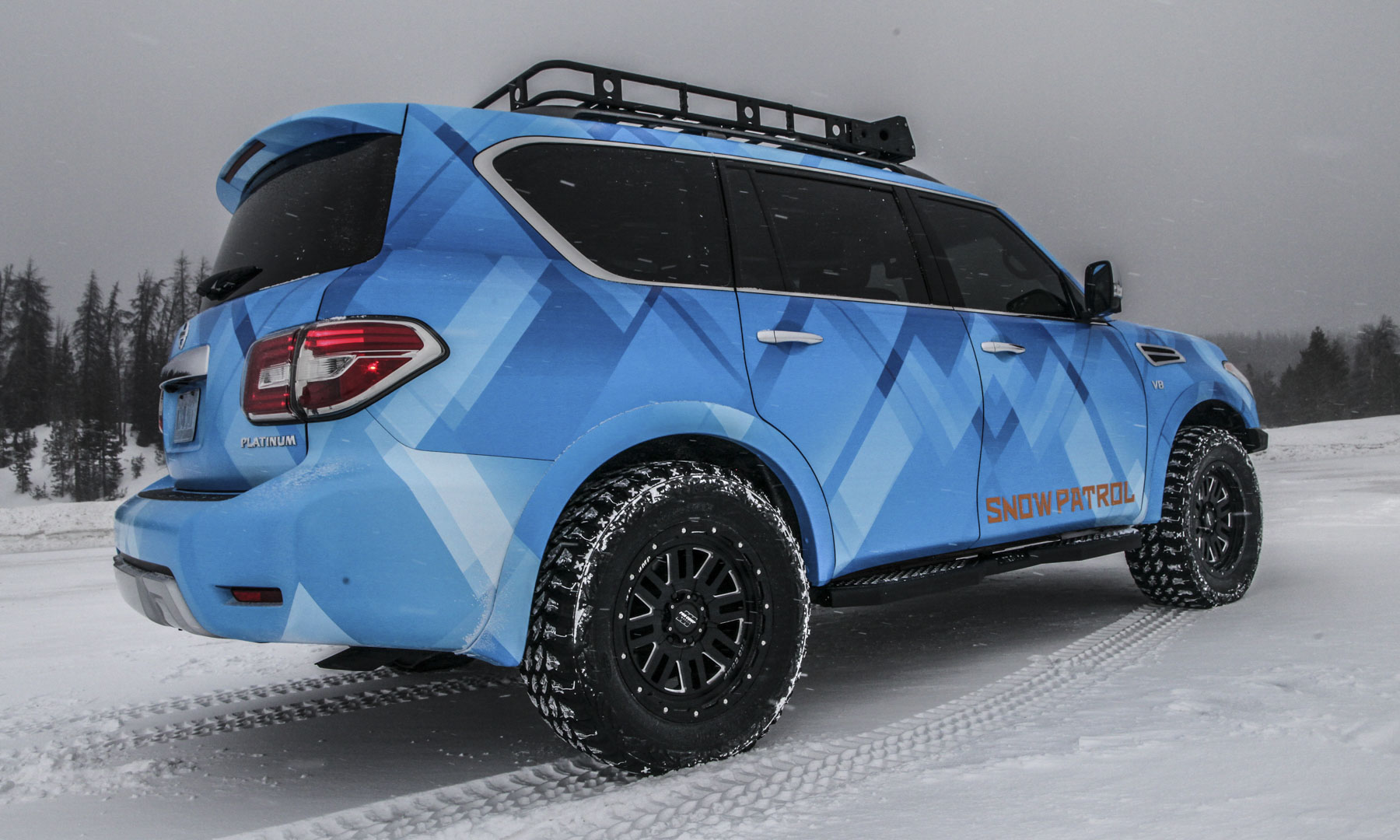 Big SUV
The Armada is Nissan’s largest SUV, offering big power as well as a spacious, comfortable interior. Unlike the extensive alterations needed for the 370Zki, the Armada’s conversion was a bit easier, given that this big SUV is already an off-road warrior. 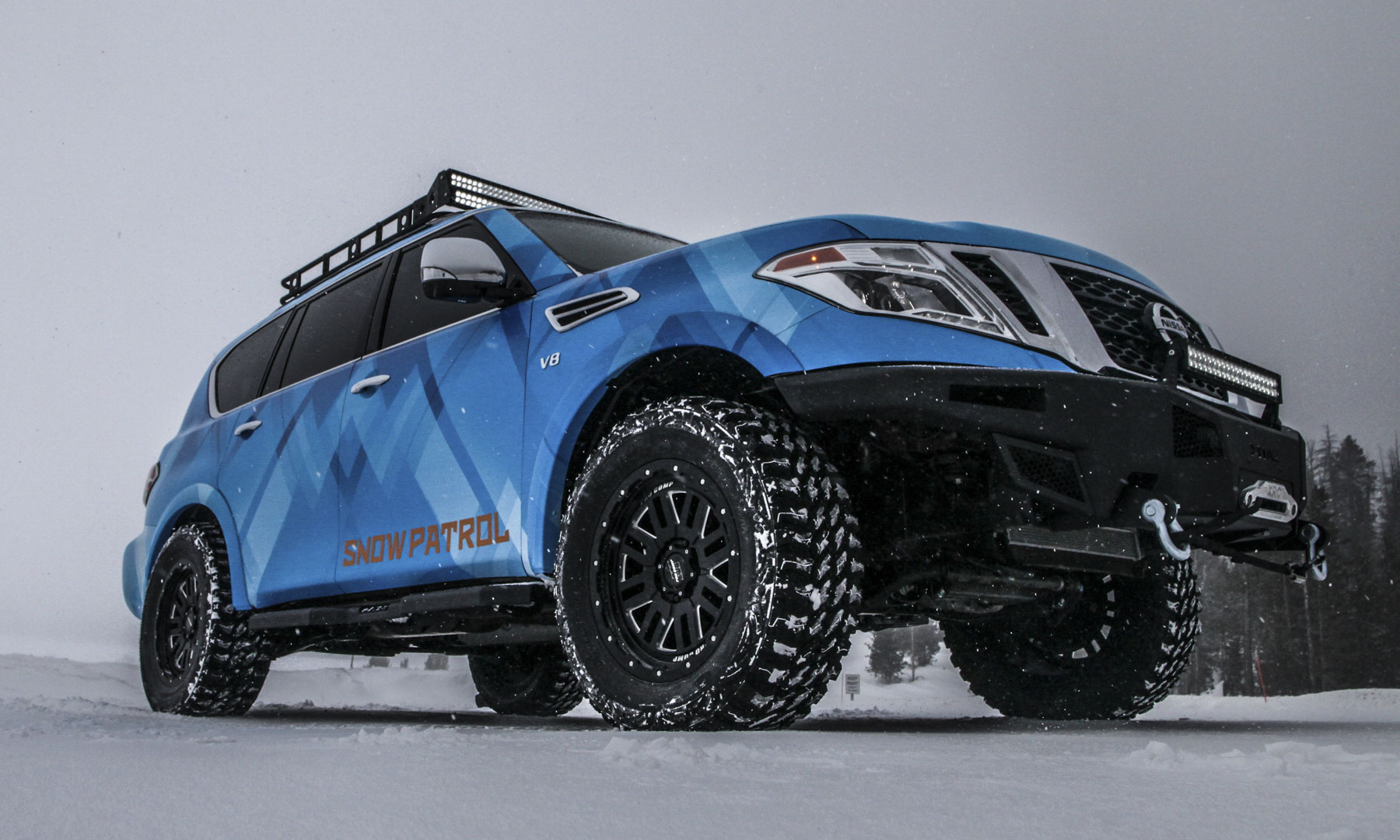 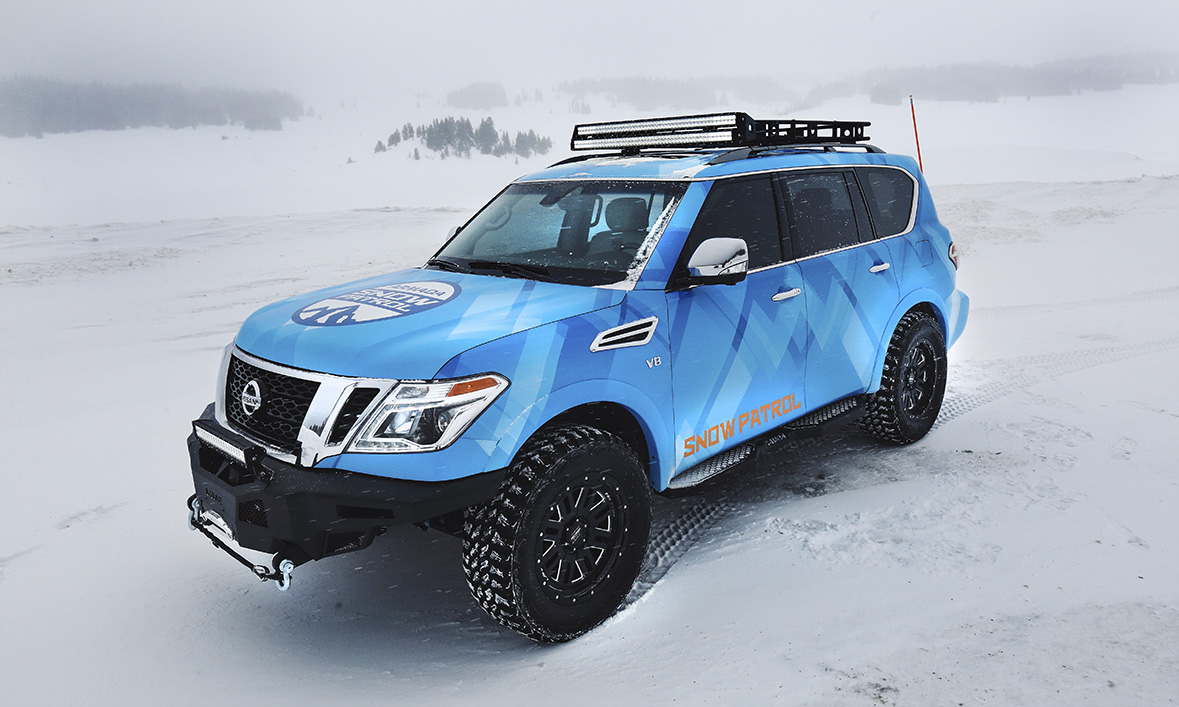 Ready for Anything
Up front, the Snow Patrol gets a larger front bumper with a grille protector bar and winch mount supporting a 12,000-pound-capacity winch. A light bar with double-row LEDs with flood and spot capabilities adorns the roof, complemented by 5-inch LED round motorsports lights mounted to the grille. 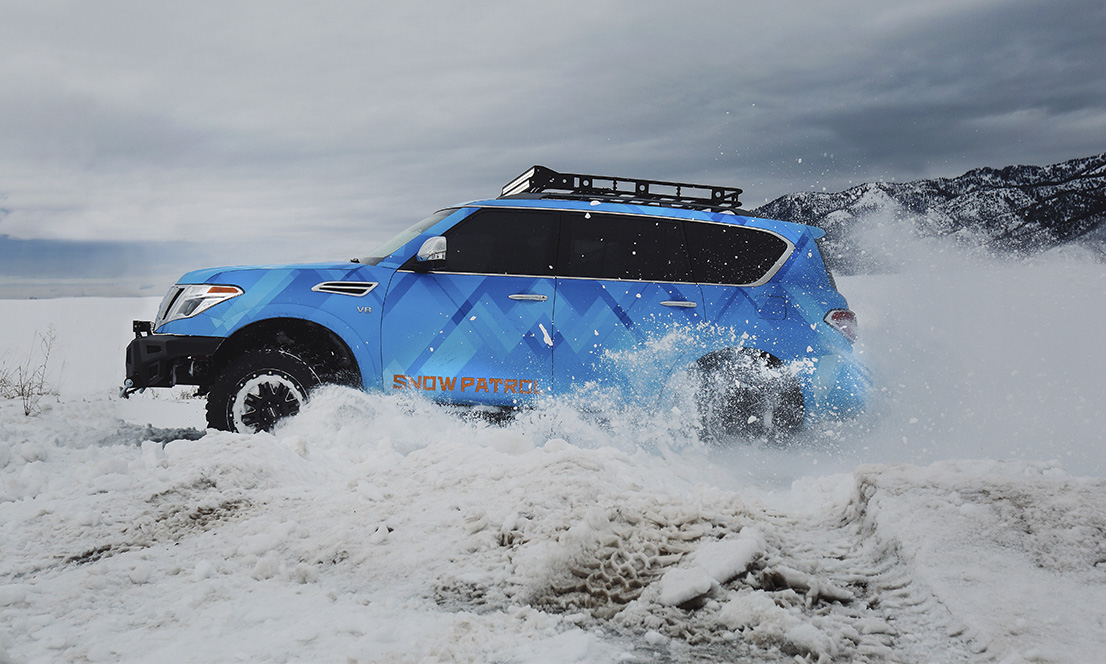 Build It Yourself
“The Armada Snow Patrol project was completed using readily available aftermarket parts — thanks especially to Pro Comp and Katzkin — showing owners how easy it is to take their family adventures to the next level even in some of winter’s most severe conditions,” said Hayes. “We think this vehicle is going to attract a lot of attention among visitors to the Chicago Auto Show.” 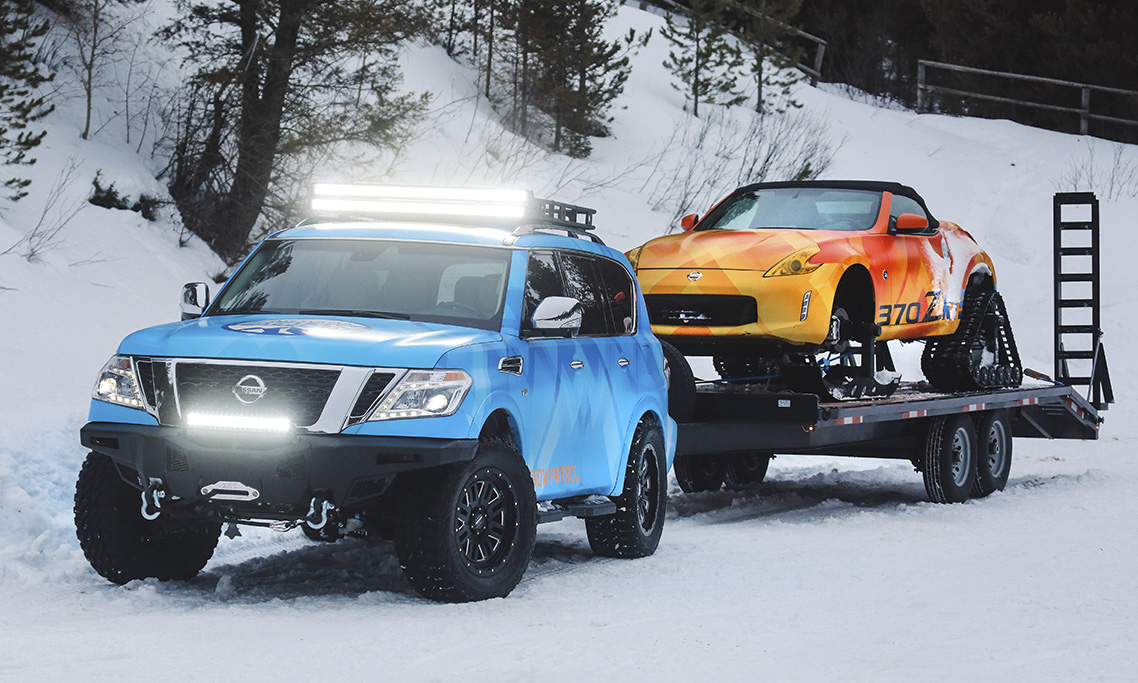 Snow Fun
These two Nissan concepts would certainly allay the doldrums of any winter day, so bring on the snow!