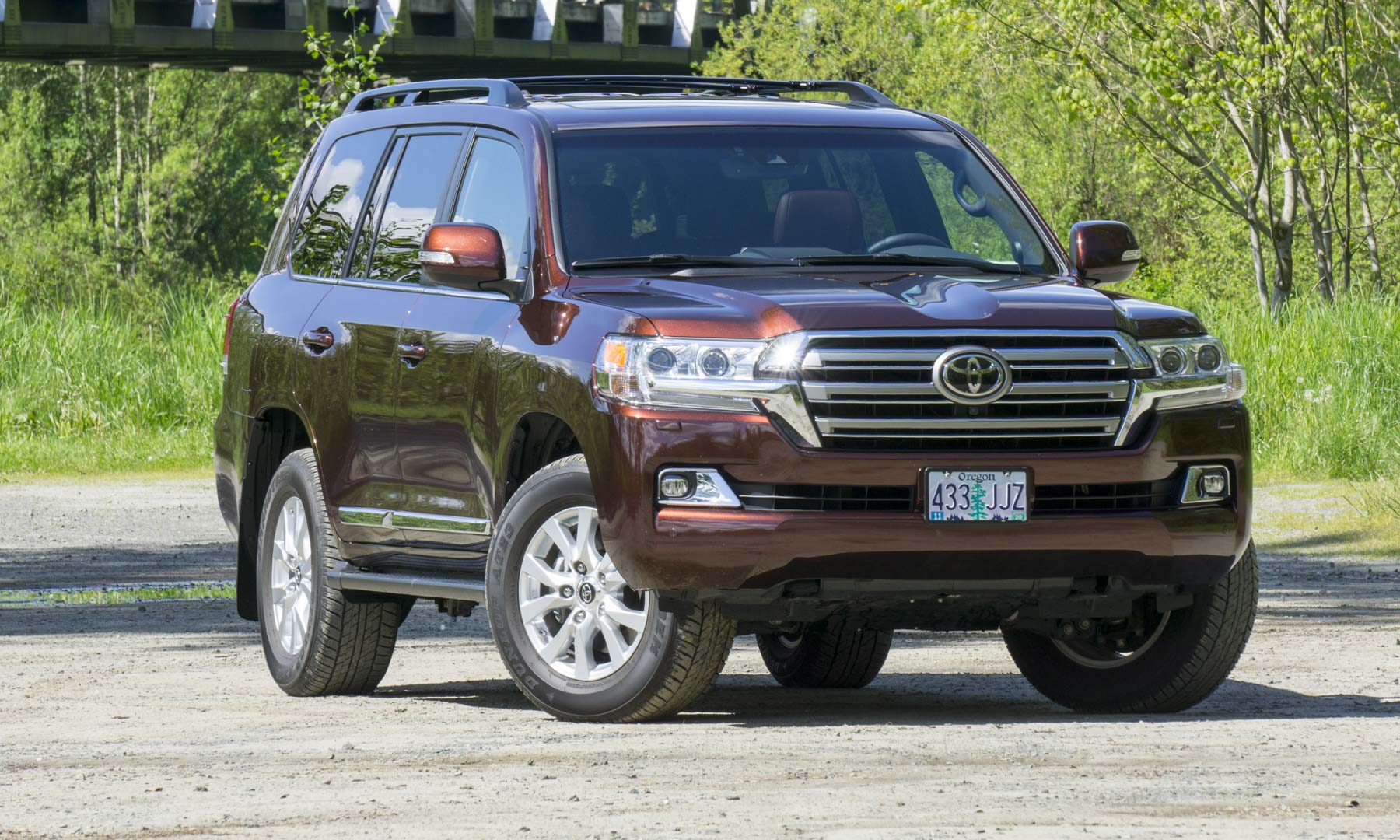 What Is It?
The Land Cruiser has been part of the Toyota lineup since 1957, which is the longest run of any model in the automaker’s portfolio. The current Land Cruiser continues the tradition of offering impressive off-road prowess, albeit in a much larger and more luxurious package than Cruisers of yesteryear. Not only is the Land Cruiser the largest vehicle in the lineup, it’s also the most expensive. Our test vehicle came fully loaded with standard equipment and a few options: a cargo tote, wireless headphones and a glass-breakage sensor — for a total MSRP of $86,663. 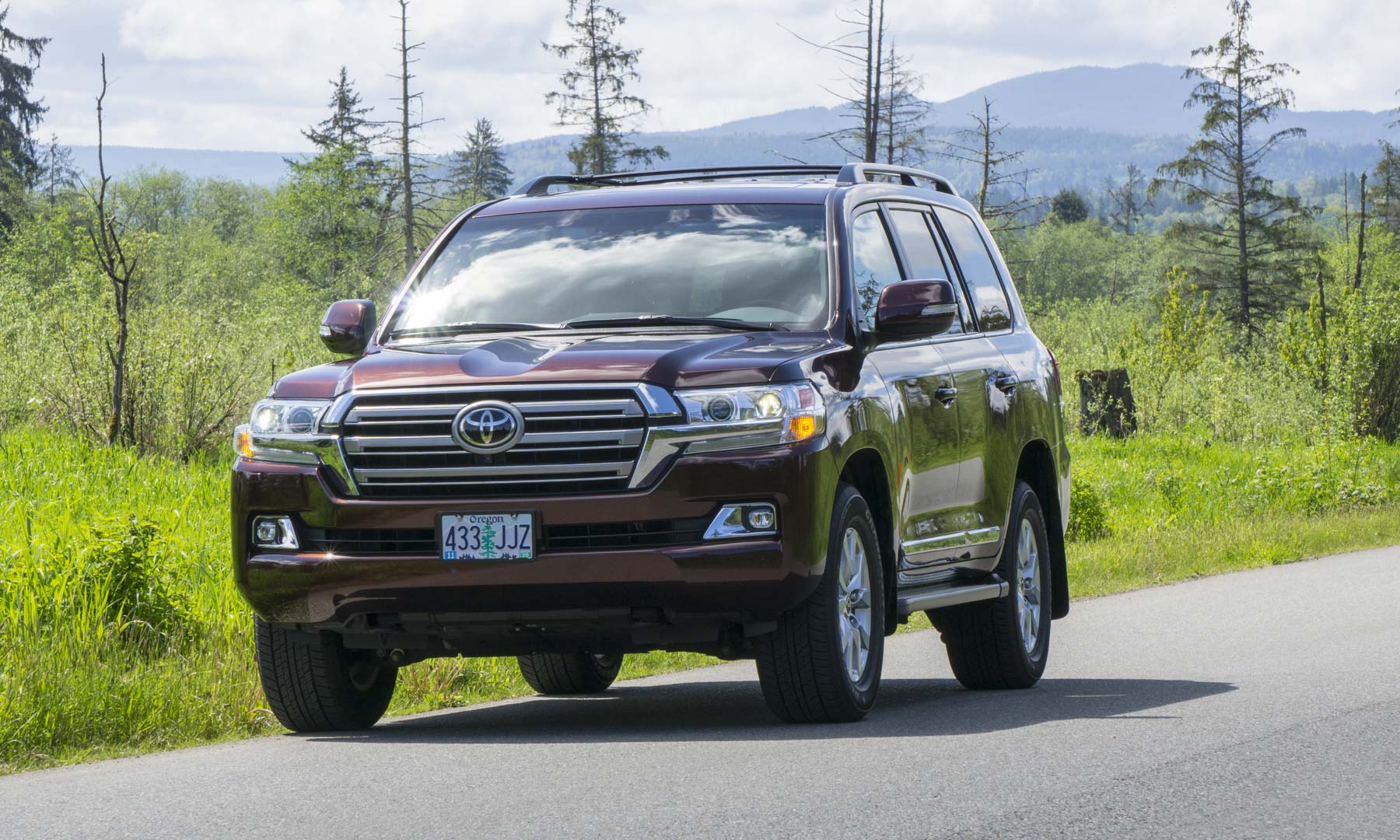 What We Like
This iconic off-roader was restyled last year with a bold new grille, projector headlights, a sculpted hood and LED brake lights. We like the new look — it brings Land Cruiser in line with current Toyota offerings, and the bold styling projects strength and capability. 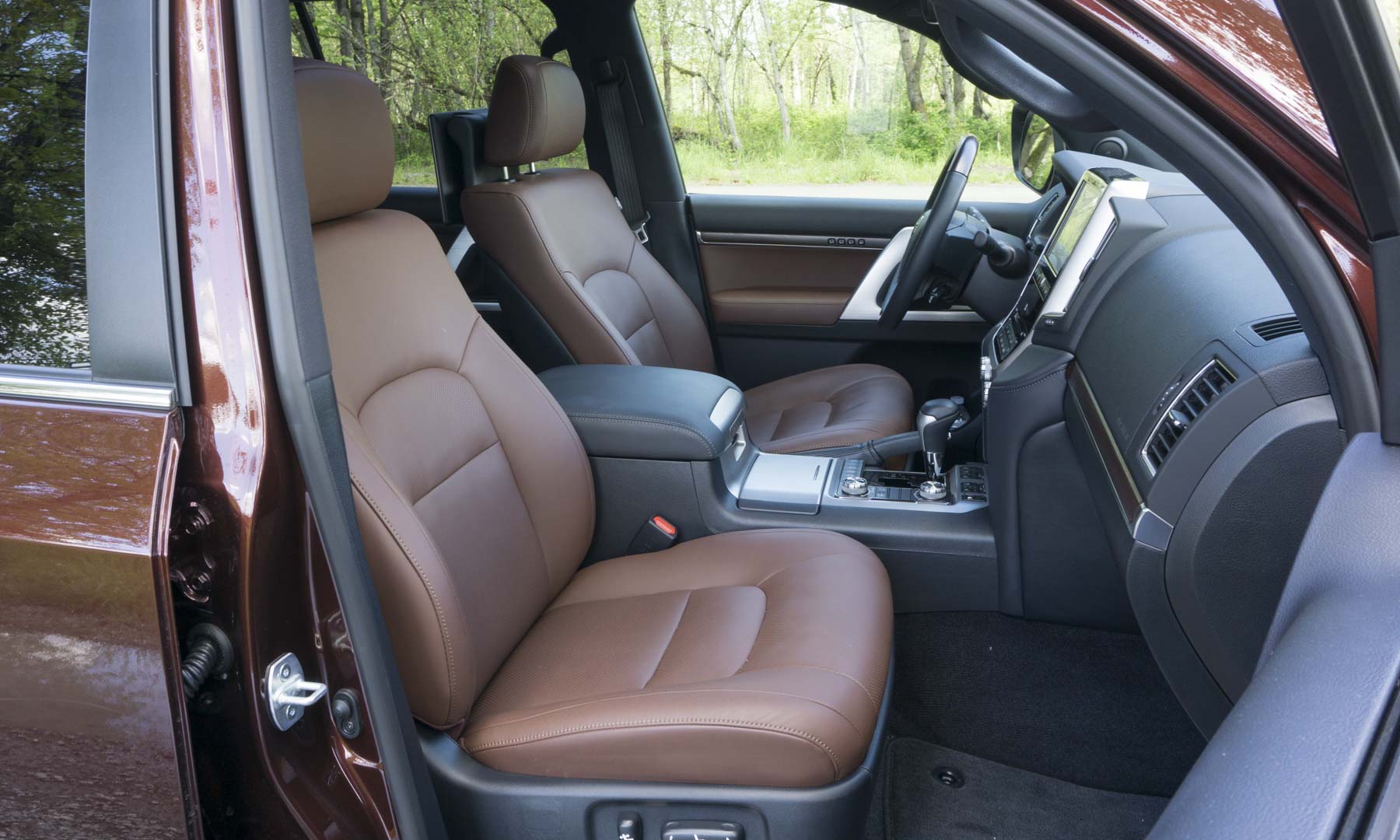 Front Seats
After driving several hundred miles in the big Land Cruiser, we really appreciated the comfortable front seats. Leather trim is soft and seats are supportive with plenty of adjustments. Front seats are also heated and cooled, and can be set to automatically activate based on climate control settings. The steering wheel is heated as well. 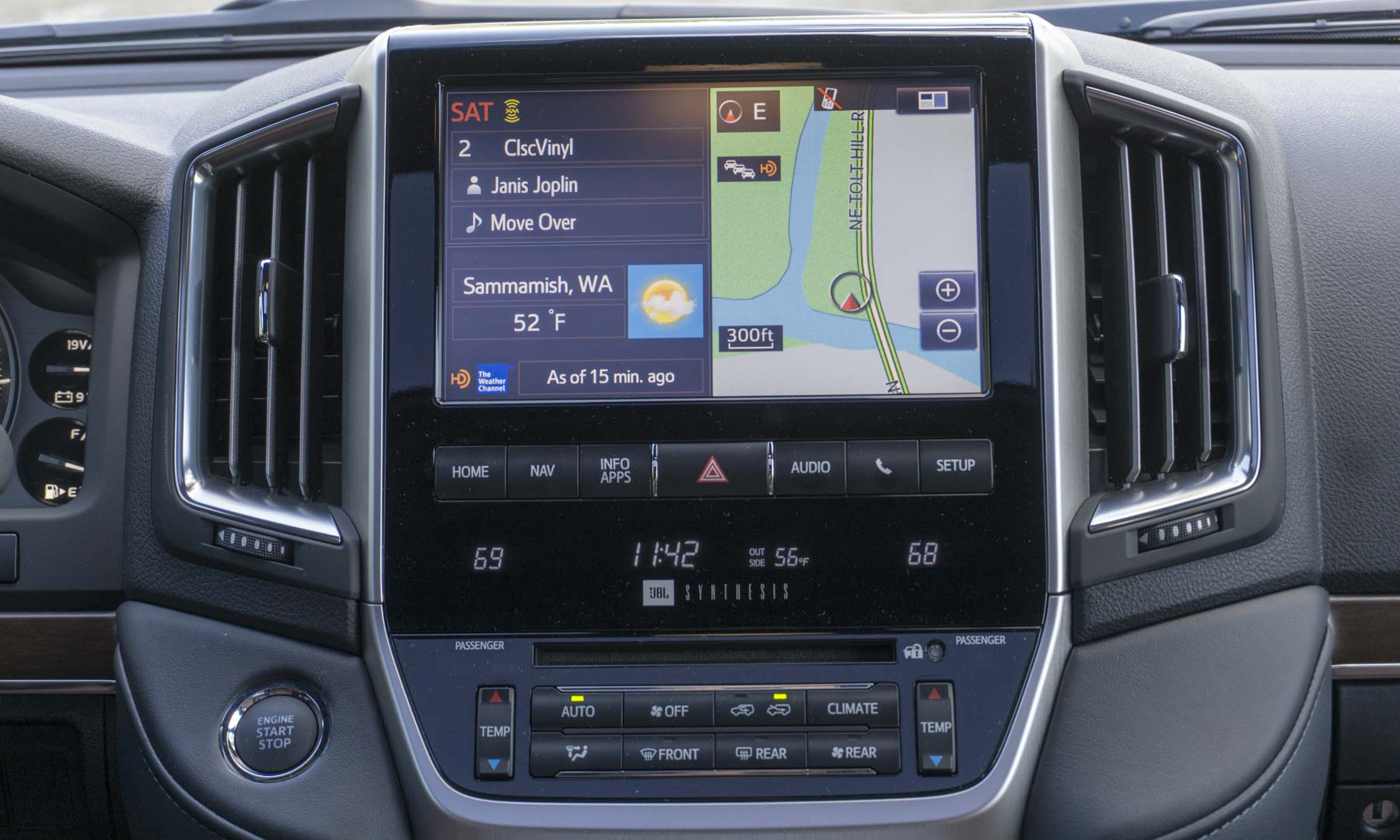 Display Screen
Even though the Land Cruiser is one of the longest-running models in the Toyota lineup, the automaker has spruced up the interior with the latest technology. The display screen is easy to read and conveniently shows audio, navigation and weather — all on the home screen. 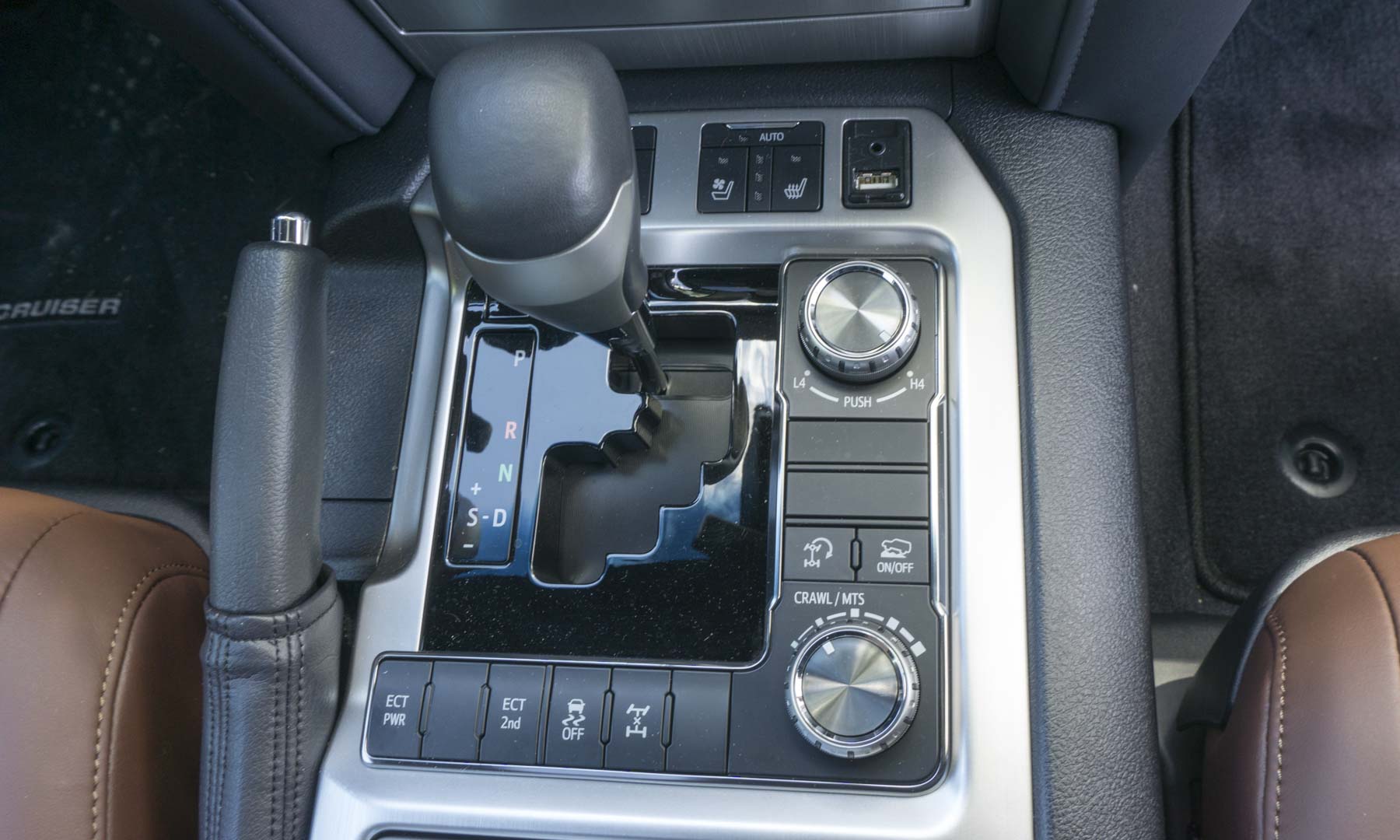 Controls
In general controls are intuitive and easy to navigate. Most of the off-road settings are in the center console for easy access. We did find it annoying that adjusting the fan requires going into a climate-control menu; this basic function should be a control that can be accessed directly from the dashboard. 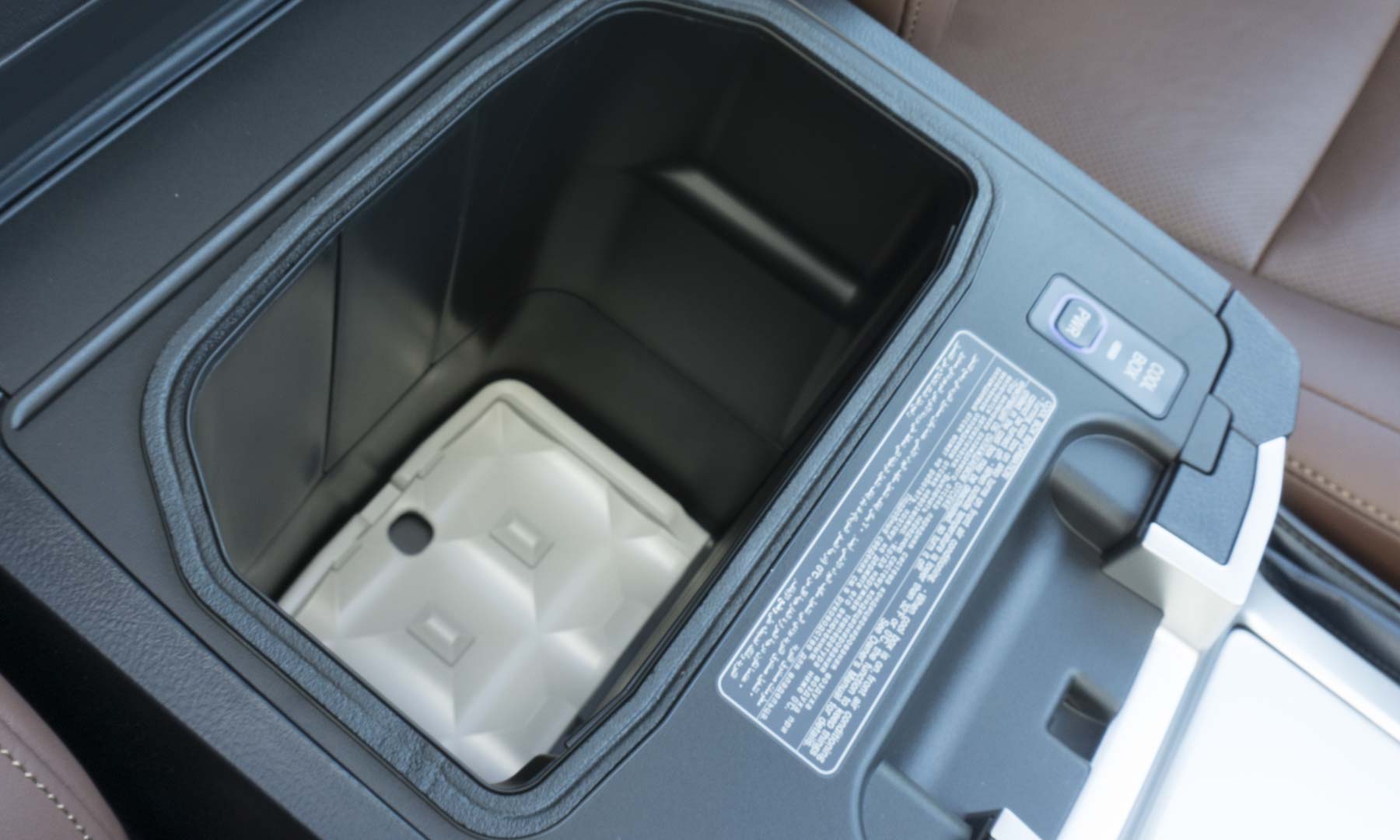 Cooler
A convenient addition is the available cooler in the center console that can chill several bottles of water or soda. 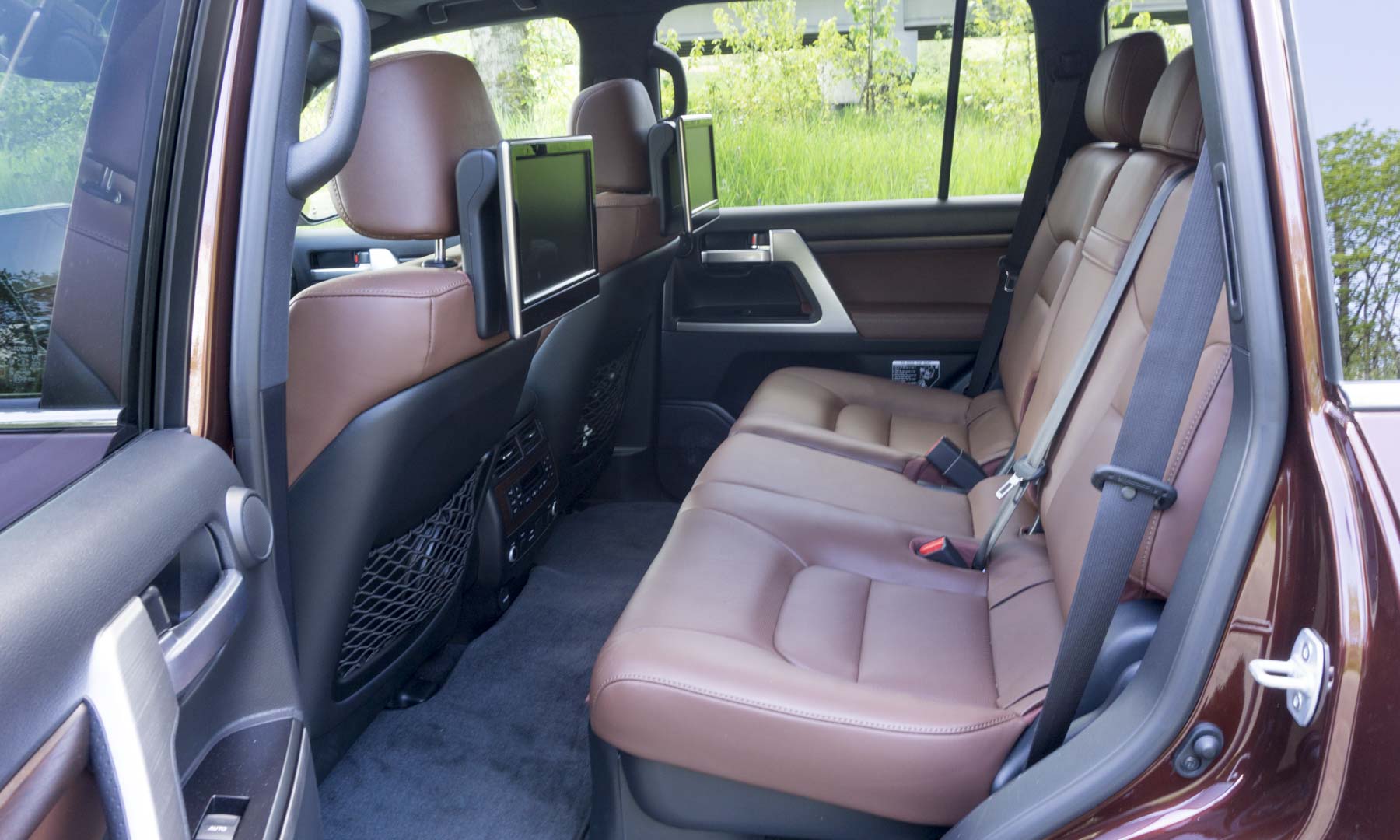 Second Row
Although the second- and third-row seats aren’t as cushy as the driver and front passenger’s, second-row riders still have plenty of space and lots of legroom. Three adults can easily fit in the space, although the middle seat is a bit tight. Large entertainment screens and wireless headphones make this a very inviting place to relax. 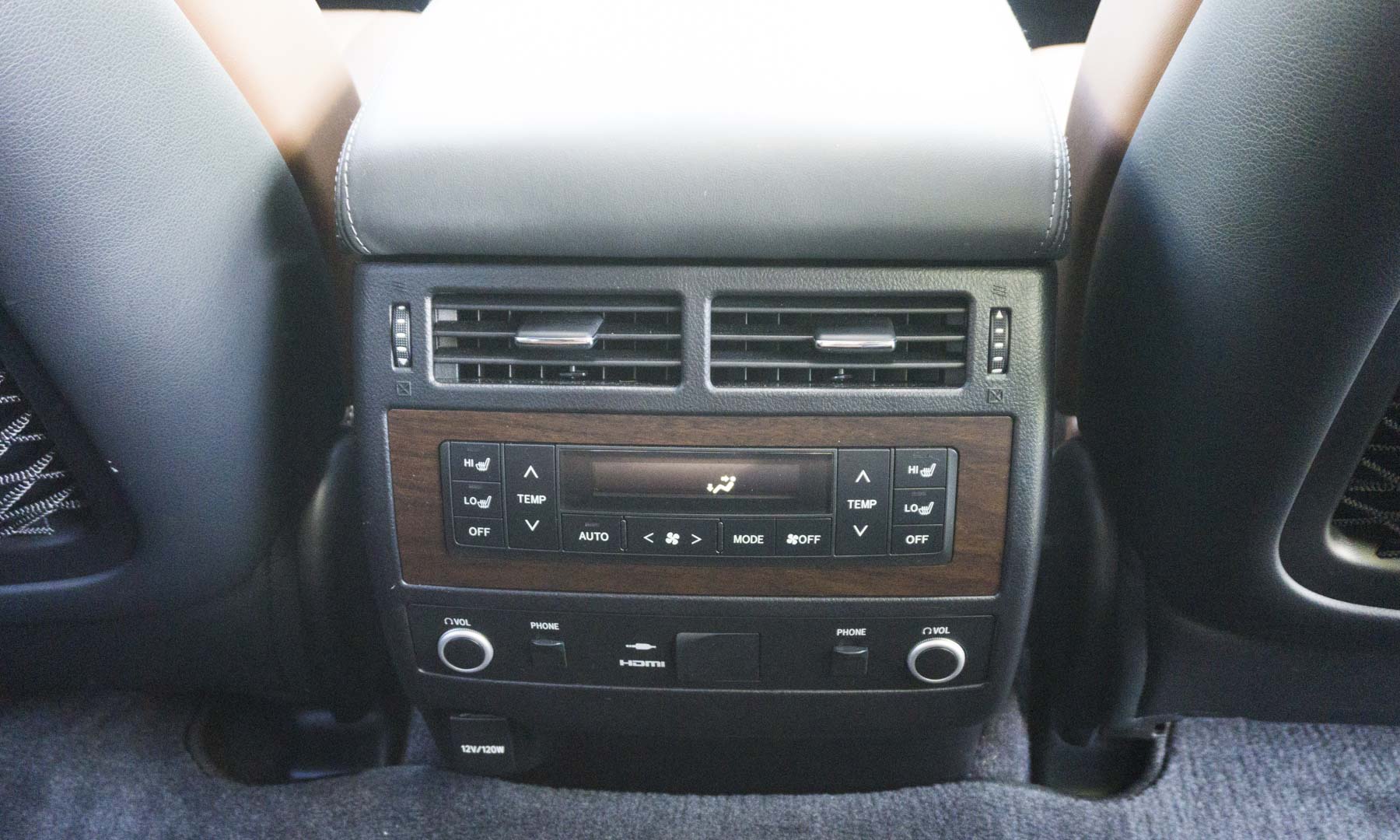 Rear-Seat Controls
Passengers sitting in the second row also have their own climate controls as well as 2-stage heated seats; USB and 12-volt power outlets are also available. 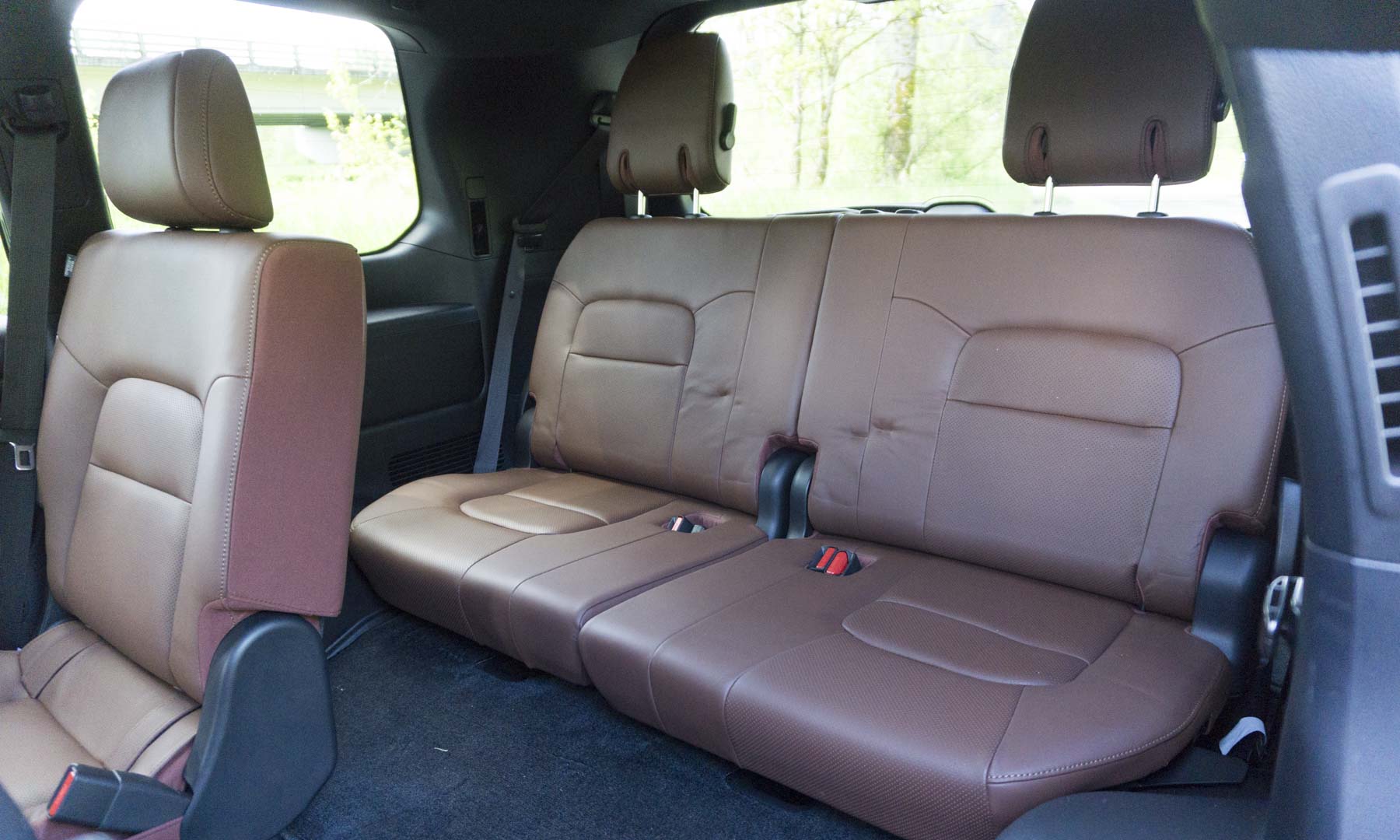 Third Row
As with any 8-occupant SUV, accessing the third row requires some level of agility. The second row moves out of the way nicely, but it is still a tight fit getting all the way to the back. Once occupants make their way to the third row, they will find the space acceptable for two bodies — the middle seat is quite uncomfortable. 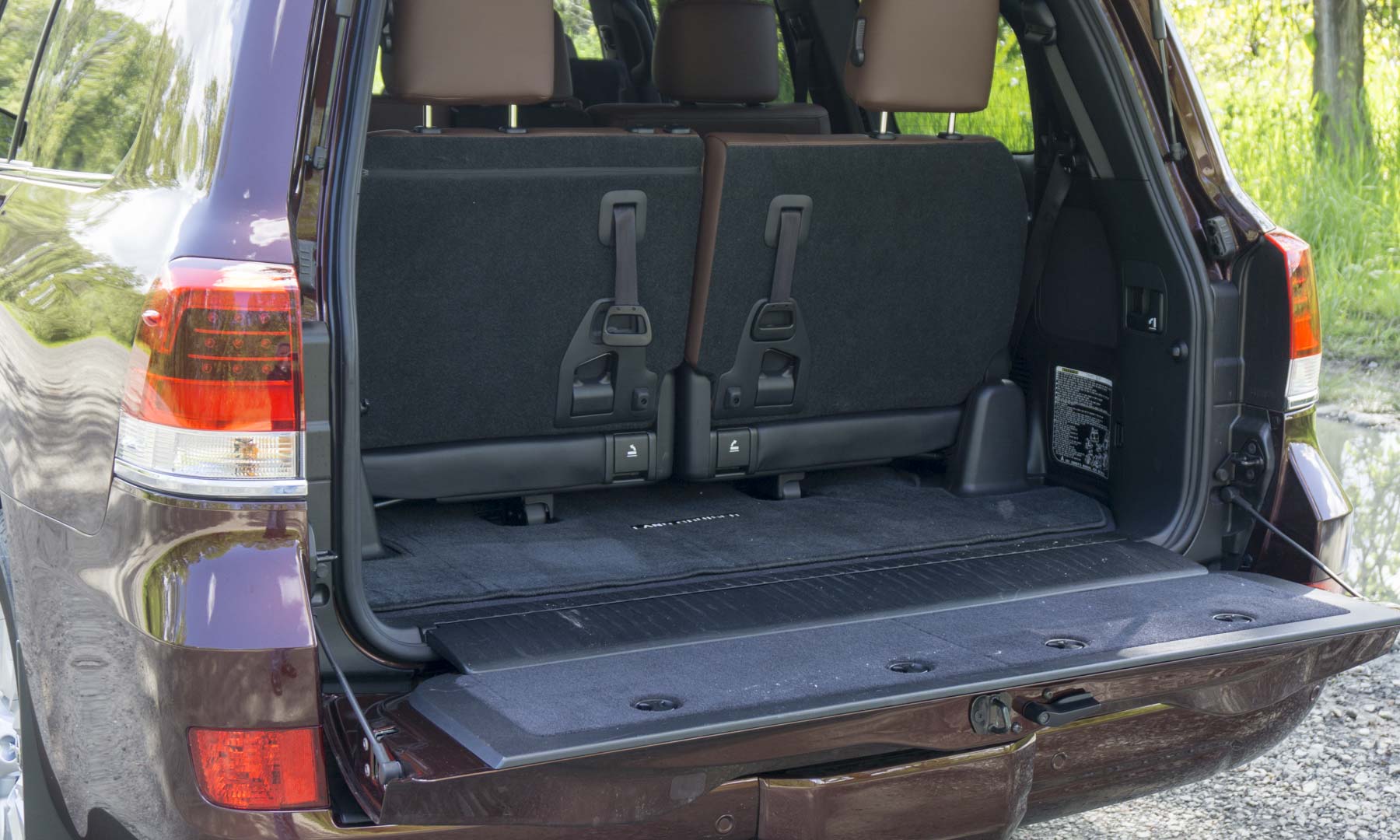 Cargo Space
The Land Cruiser doesn’t offer a lot of cargo space when the third row is in place. We appreciate the tailgate/hatch combination, which makes for easy loading as well as a nice place to sit. Additional storage can be found inside the tailgate. 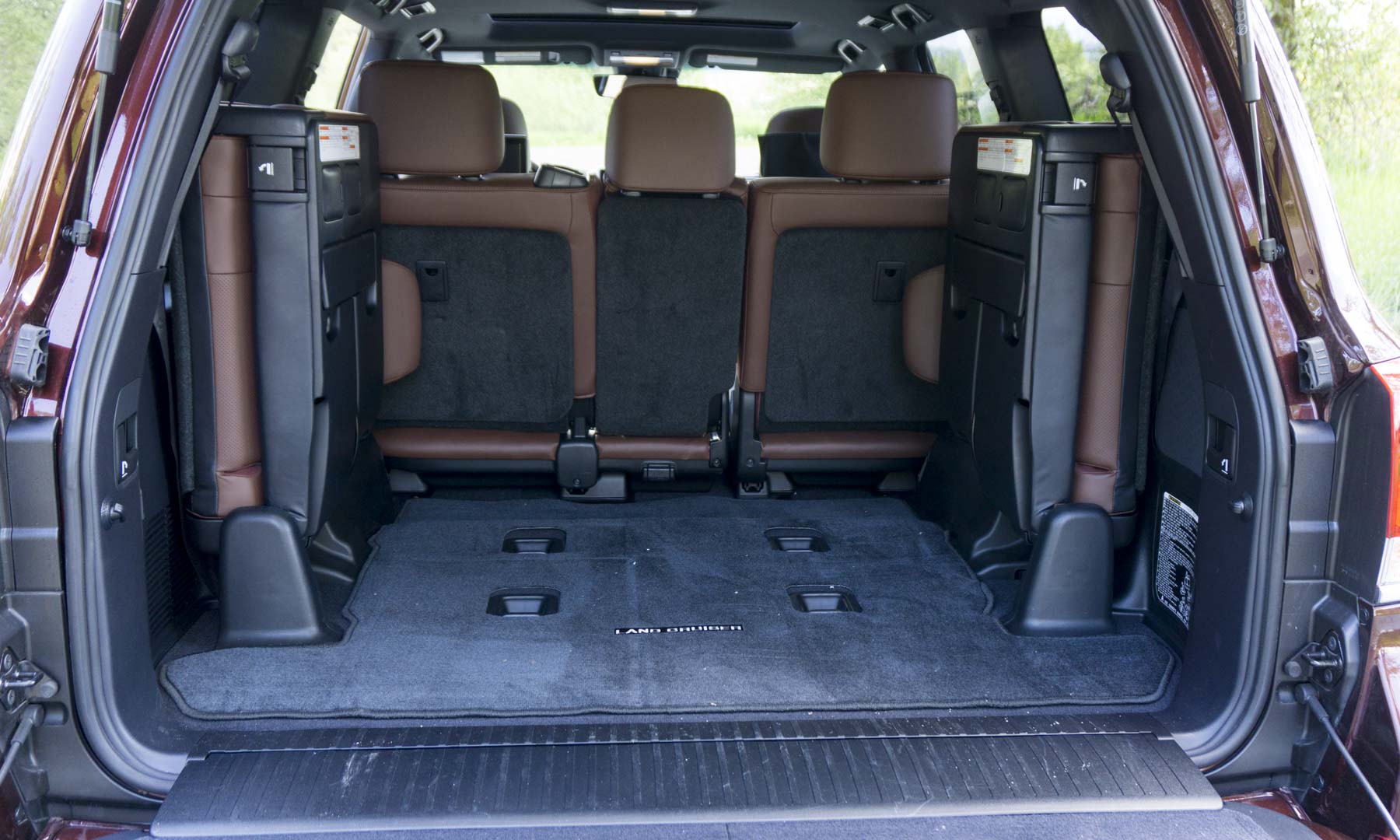 Folding Seats
Unlike most SUVs, the third row of the Land Cruiser splits and folds up against the sides of the vehicle. These seats are extremely easy to fold — practically a one-handed procedure. Most owners will likely leave the seats in this position most of the time. 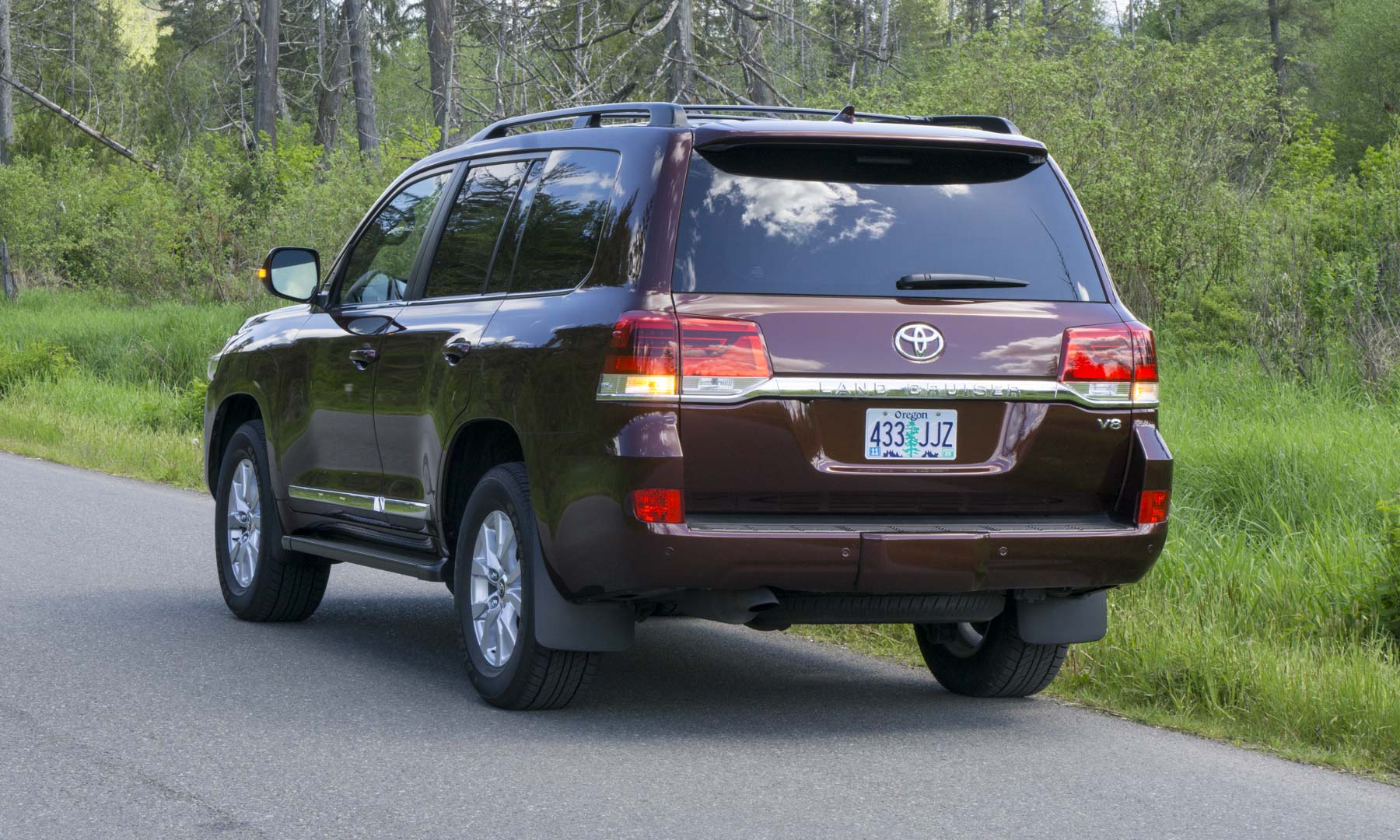 Driving
Weighing in at almost 3 tons, the Land Cruiser feels particularly solid on the road. For a truck-based SUV, the ride is surprisingly smooth and comfortable, although handling is about what you’d expect from a vehicle with so much mass. However, the mass can be a benefit — the Land Cruiser inspired confidence even at freeway speeds through driving rain and standing water, with barely a wiggle even though we could feel water spraying up against the floorboards. 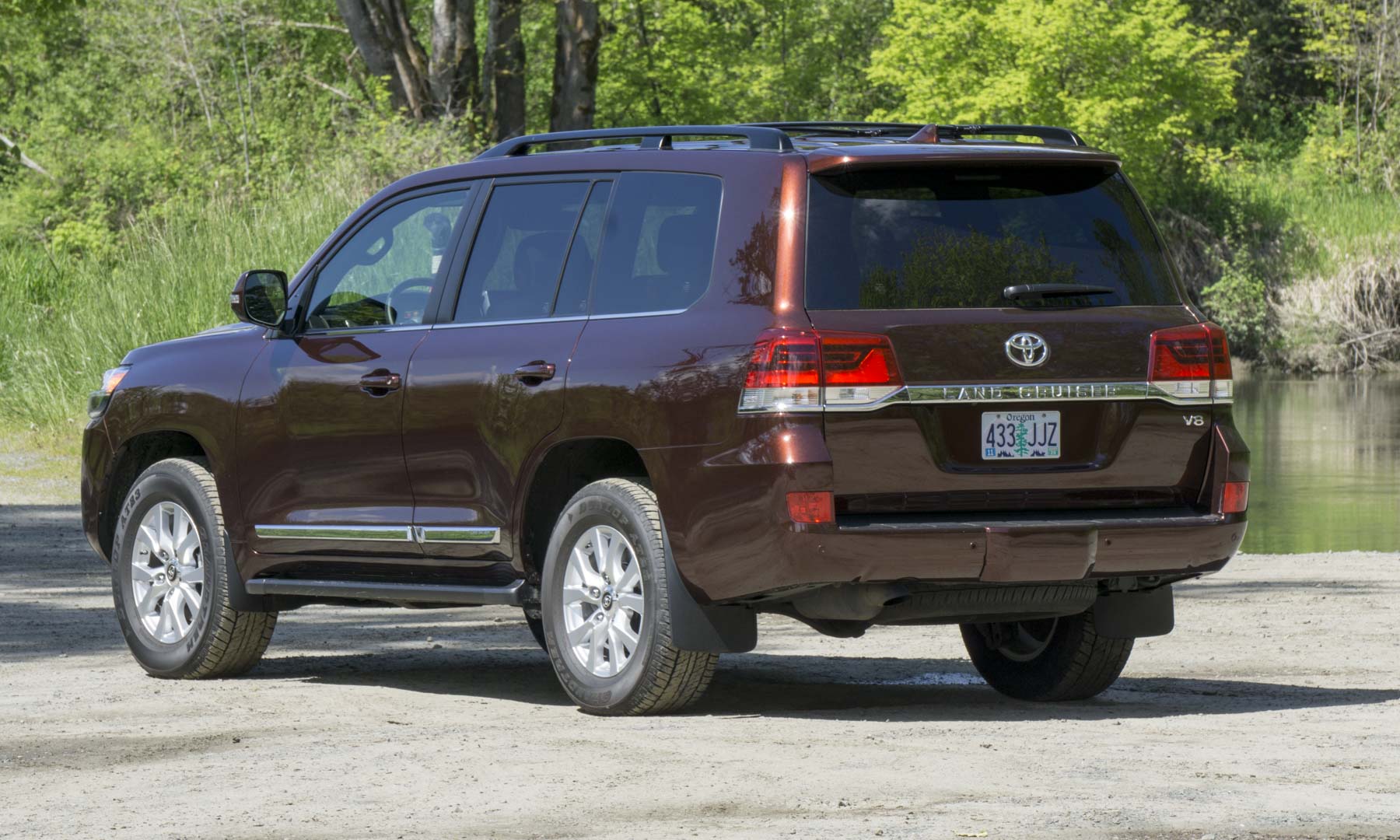 Off-Roading
Many consumers who buy a Land Cruiser do so for its bold looks and luxurious interior, but this big vehicle also is one of the few true off-roaders left on the market. Four-wheel drive is standard, and with a 2-speed transfer case, low range, a multi-terrain select system, limited-slip locking differential and a dynamic suspension system, the Land Cruiser has capabilities to handle almost any condition imaginable. Unfortunately, we didn’t have the opportunity to take this Land Cruiser off pavement. 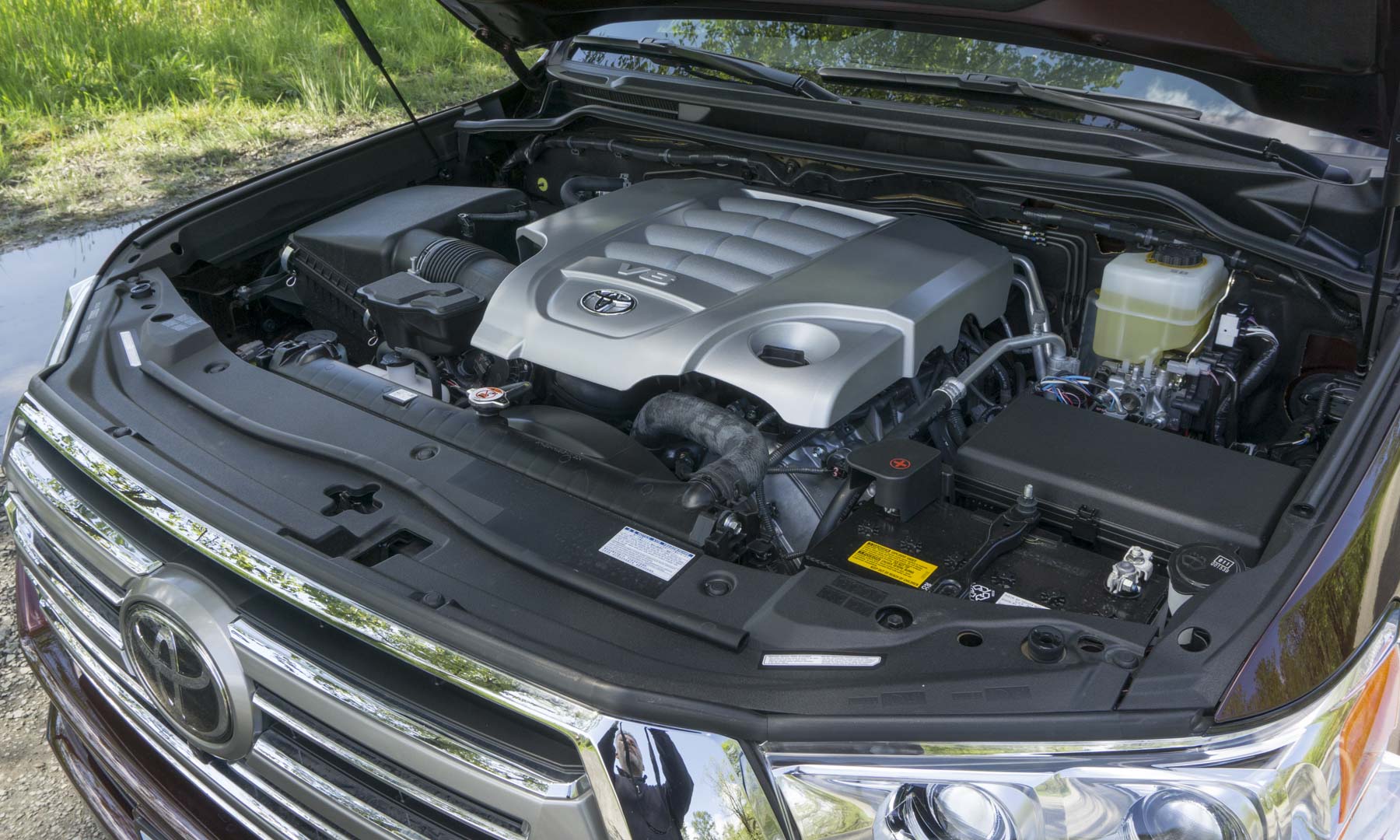 Power
It takes a lot of power to move a vehicle this large, and the Land Cruiser delivers. The only engine available is a 5.7-liter V8 producing 381 horsepower and 401 lb-ft of torque — good enough to provide more than adequate acceleration and performance. The Land Cruiser can tow more than 8,000 pounds. 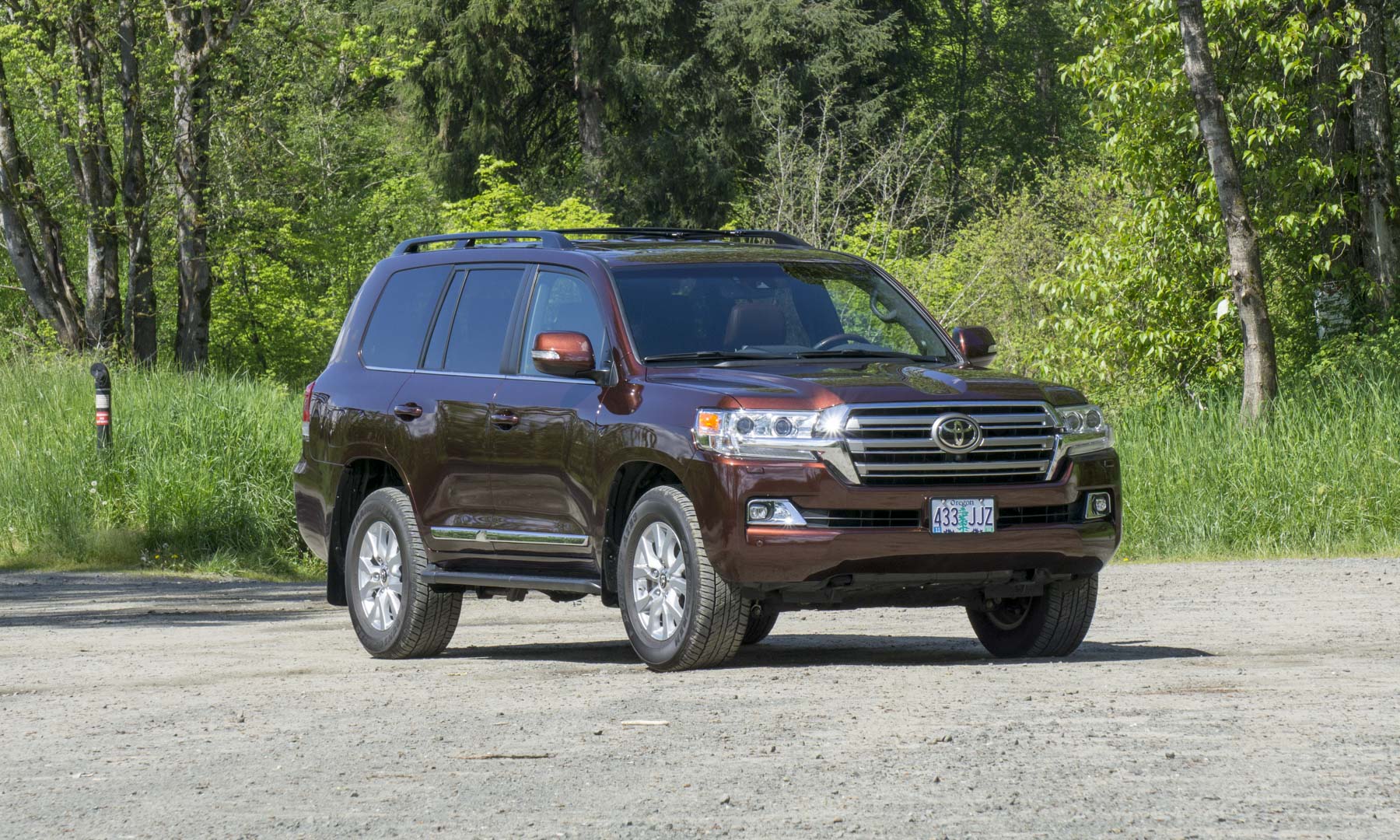 What We Don’t Like
Although no big surprise, fuel economy is not a high point in the book of Land Cruiser. During predominantly freeway driving the best we could achieve was 17 mpg, which is in line with the EPA highway rating of 18 mpg. 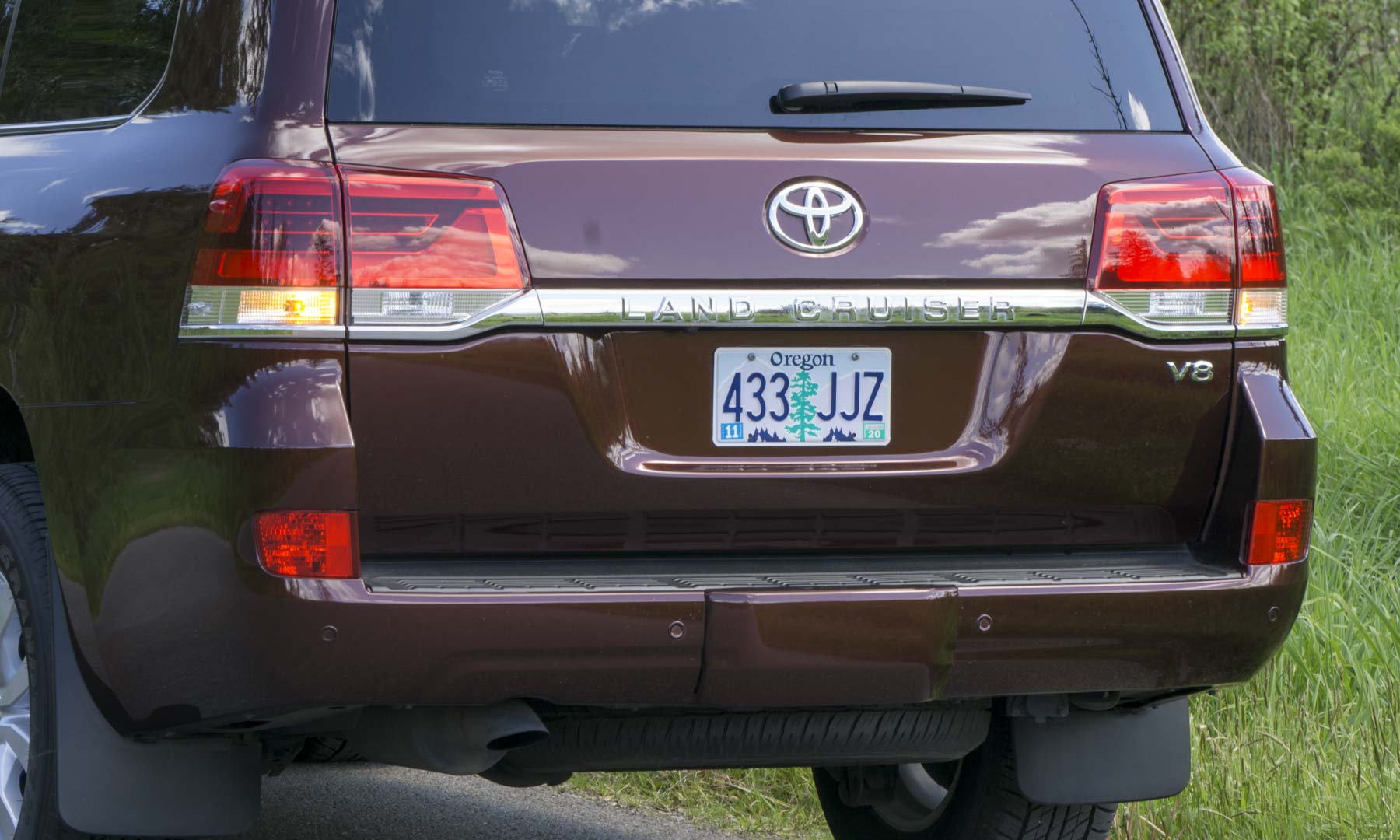 Turn Signals
This may seem petty, but many modern vehicles will flash the turn signal three times with just a touch. It’s one of those features that drivers become used to almost immediately, and miss when it isn’t there. It wasn’t there, and we missed it. 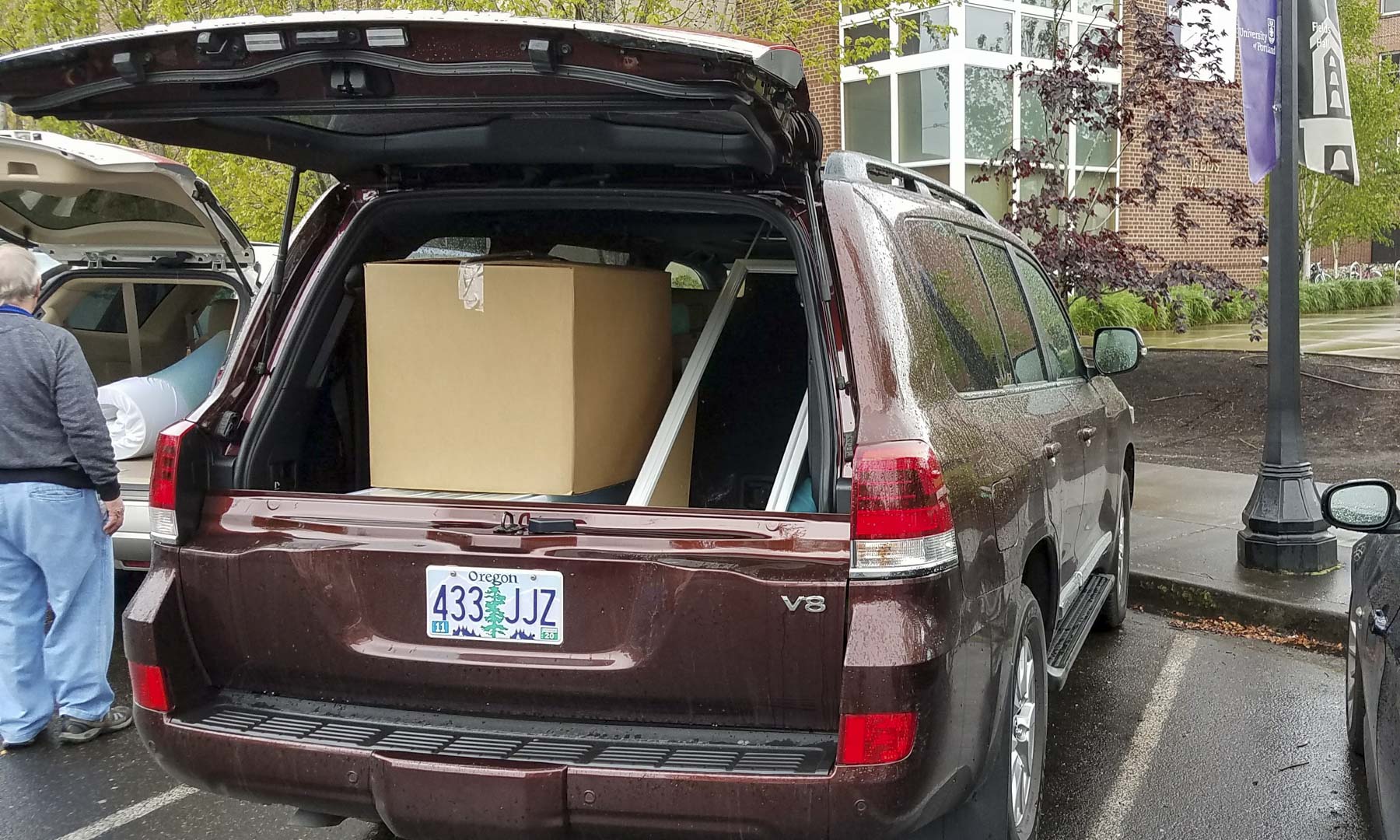 Cargo Space
There’s no denying that the Land Cruiser is a large vehicle, but it seems to shrink rapidly when loading cargo. With a second row that doesn’t quite move out of the way and a third row taking up space on the sides, this big Toyota is not as spacious inside as we would have expected. 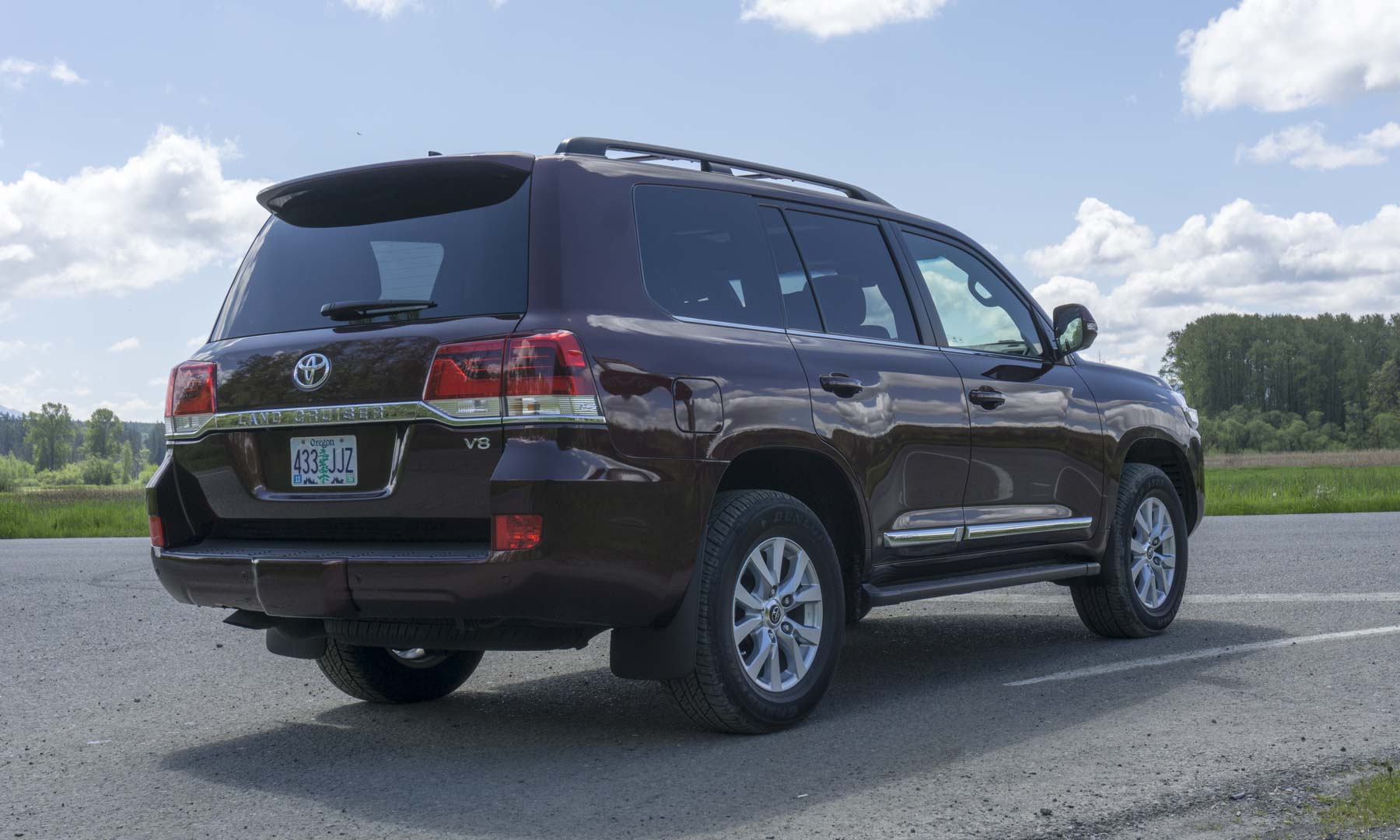 Rating: 8.5
There aren’t many truck-based luxury SUVs still available, but the Land Cruiser certainly stands out among them. The big SUV is not for everyone — it carries a hefty price tag and will continue to cost at the fuel pump. But with legendary off-road capability, a luxurious interior, a solid ride and plenty of power, the big SUV does have a lot to offer. Granted it lives large, but the Land Cruiser should soldier on for years to come.