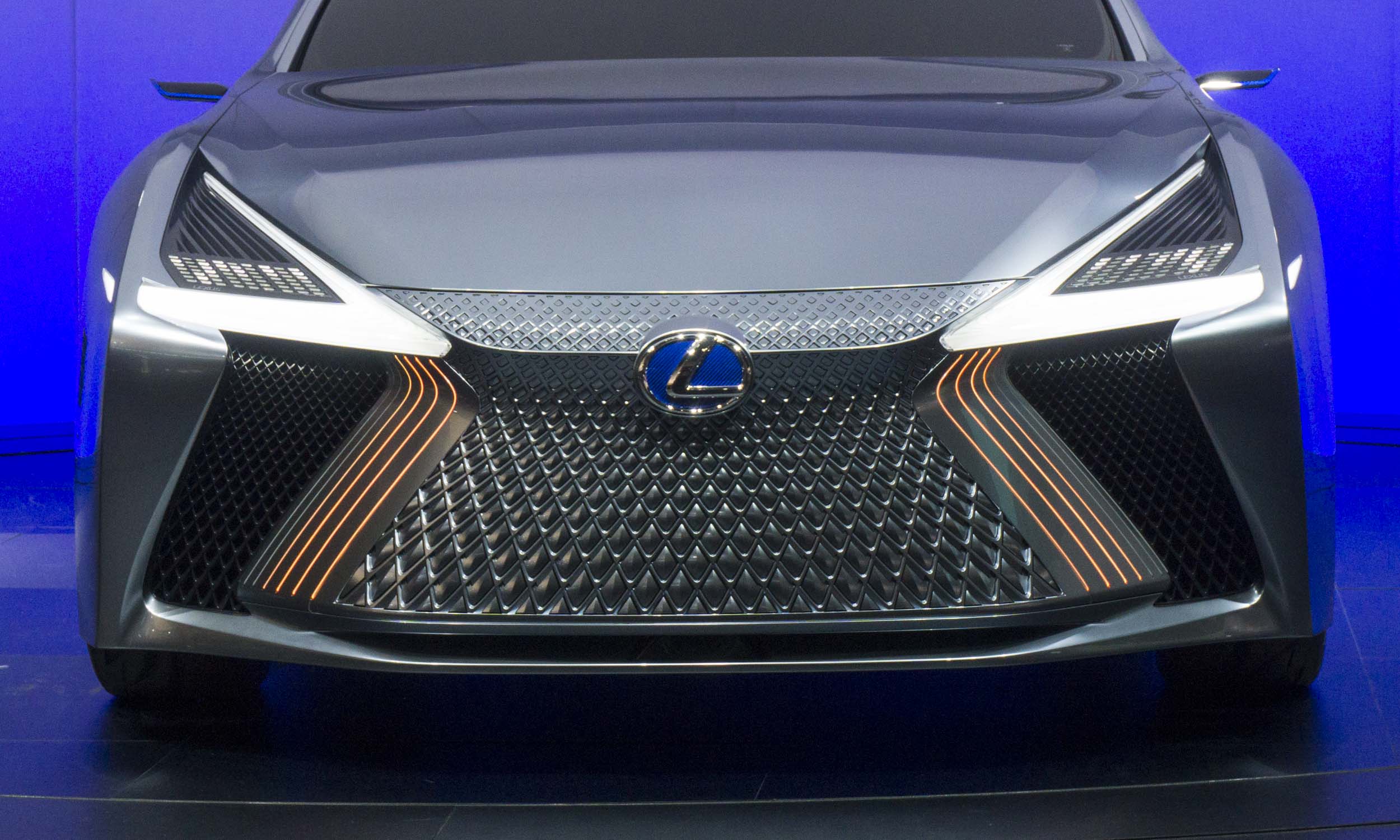 © Perry Stern, Automotive Content Experience
Japan’s Big Show
Considered one of the most significant among the handful of major international auto shows, the Tokyo Motor Show takes place every other year, and often premieres some of the most interesting concept cars on the show circuit. The 2017 edition of Japan’s biggest auto show was no exception — almost every major Japan-based auto manufacturer loaded their stands with all sorts of concept vehicles showcasing futuristic design, advanced powertrains and an array of high-tech mobility solutions. Concept cars are considered the bellwether of the automotive world, so let’s peer into the future — highlights from this year’s Tokyo Motor Show. 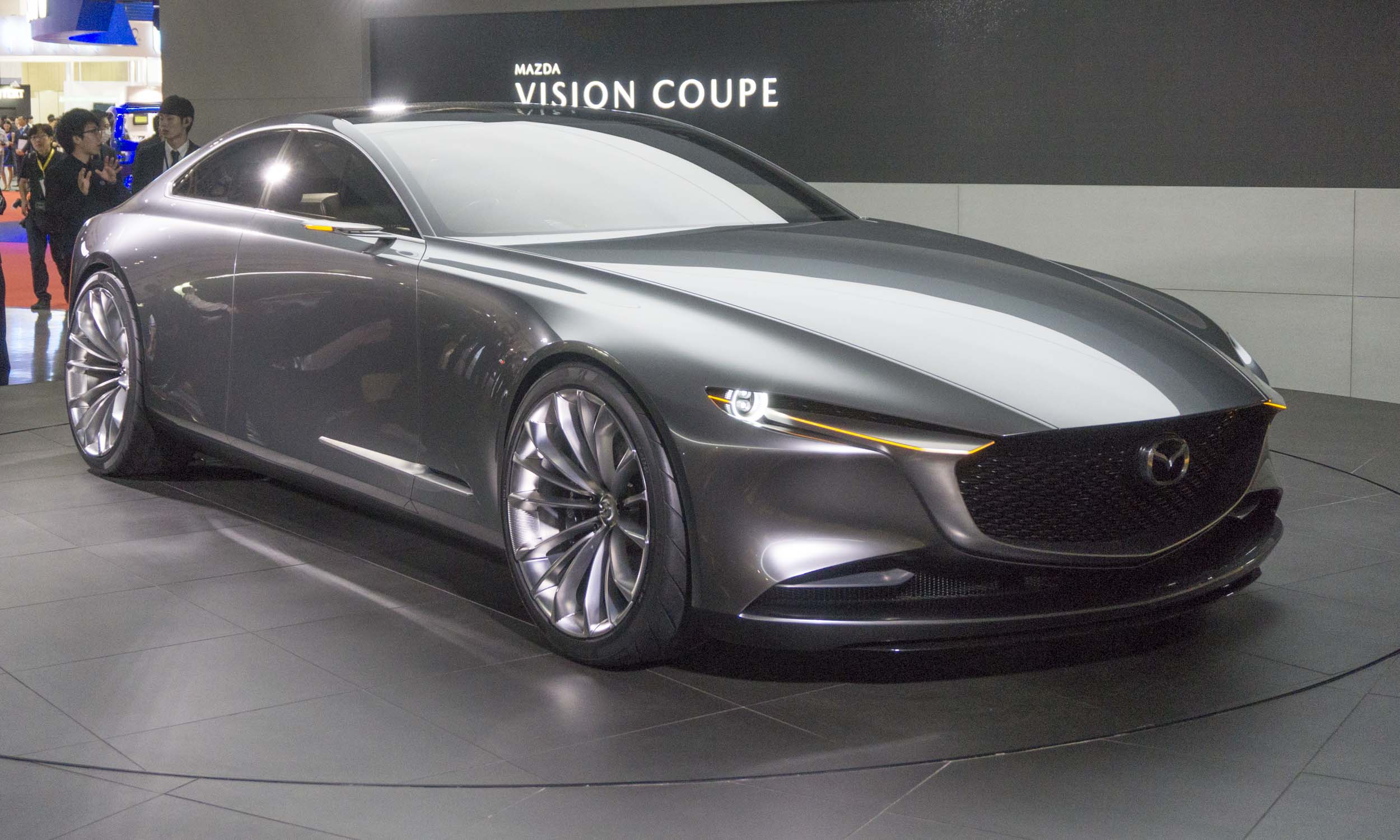 © Perry Stern, Automotive Content Experience
Mazda VISION COUPE
Mazda wowed the attending journalists with this beautiful VISION COUPE concept. Continuing to iterate on the brand’s KODO design language, this concept indicates how design will evolve for future Mazda models. Employing what seems to be a growing trend among automakers, the VISION COUPE is a four door; however, it carries the lines of a luxury coupe. Most interesting is the evolution of the classic Mazda grille with the deeply inset headlights that further enhances the luxurious feel of this elegant machine. 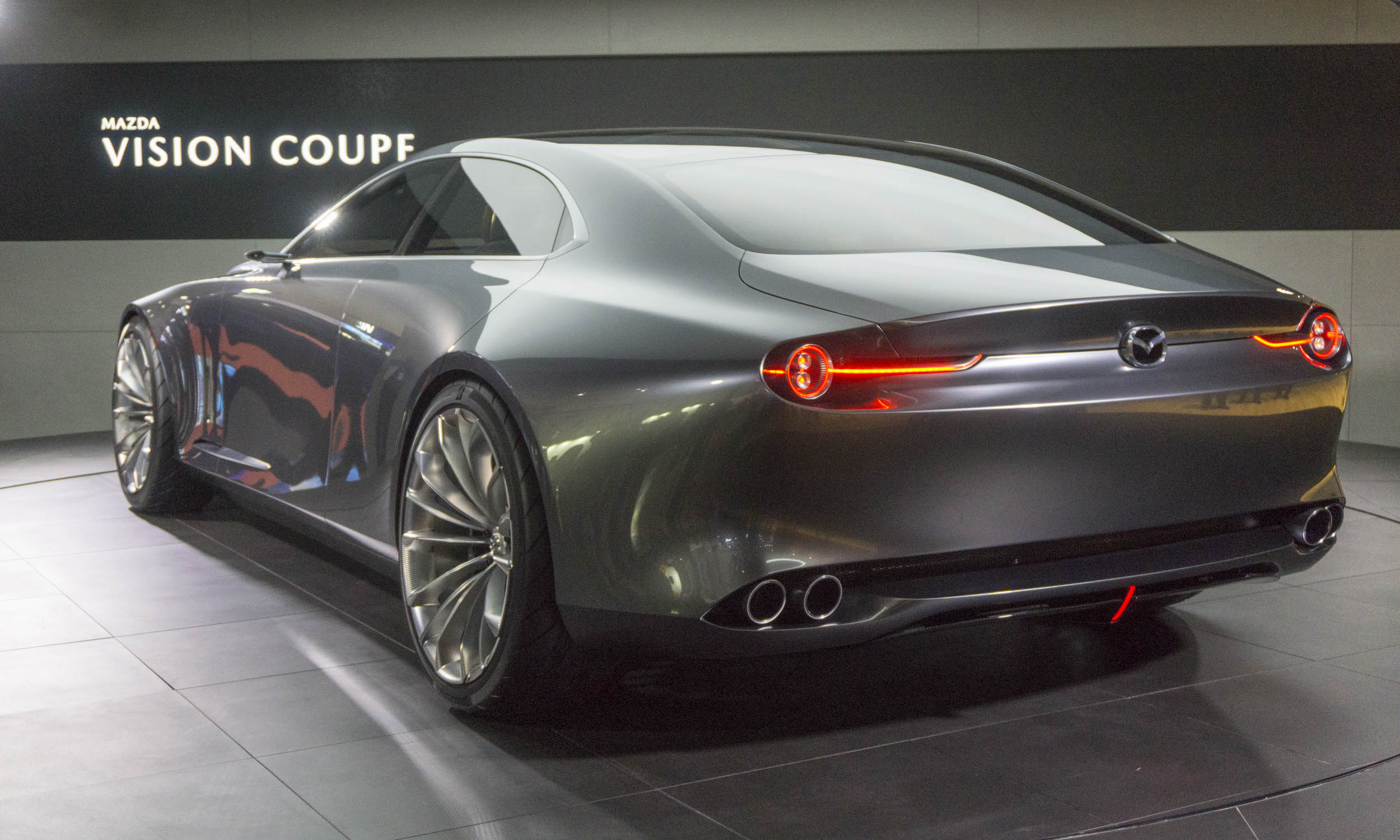 © Perry Stern, Automotive Content Experience
Mazda VISION COUPE
The VISON COUPE’s silhouette is particularly stunning with its long hood, high beltline and sleek passenger compartment. Large wheels and bold rear fenders complete the look of a what could easily be a flagship sedan for the Mazda brand. The clean design continues to the rear with a sloping rear window, simple round taillights and quad exhaust outlets. Granted, car buffs would love to see this vehicle on the road, but the VISION COUPE is simply a concept at this point. That said, with a little luck and lot of positive feedback, many of these styling cues could be found on future Mazda models. 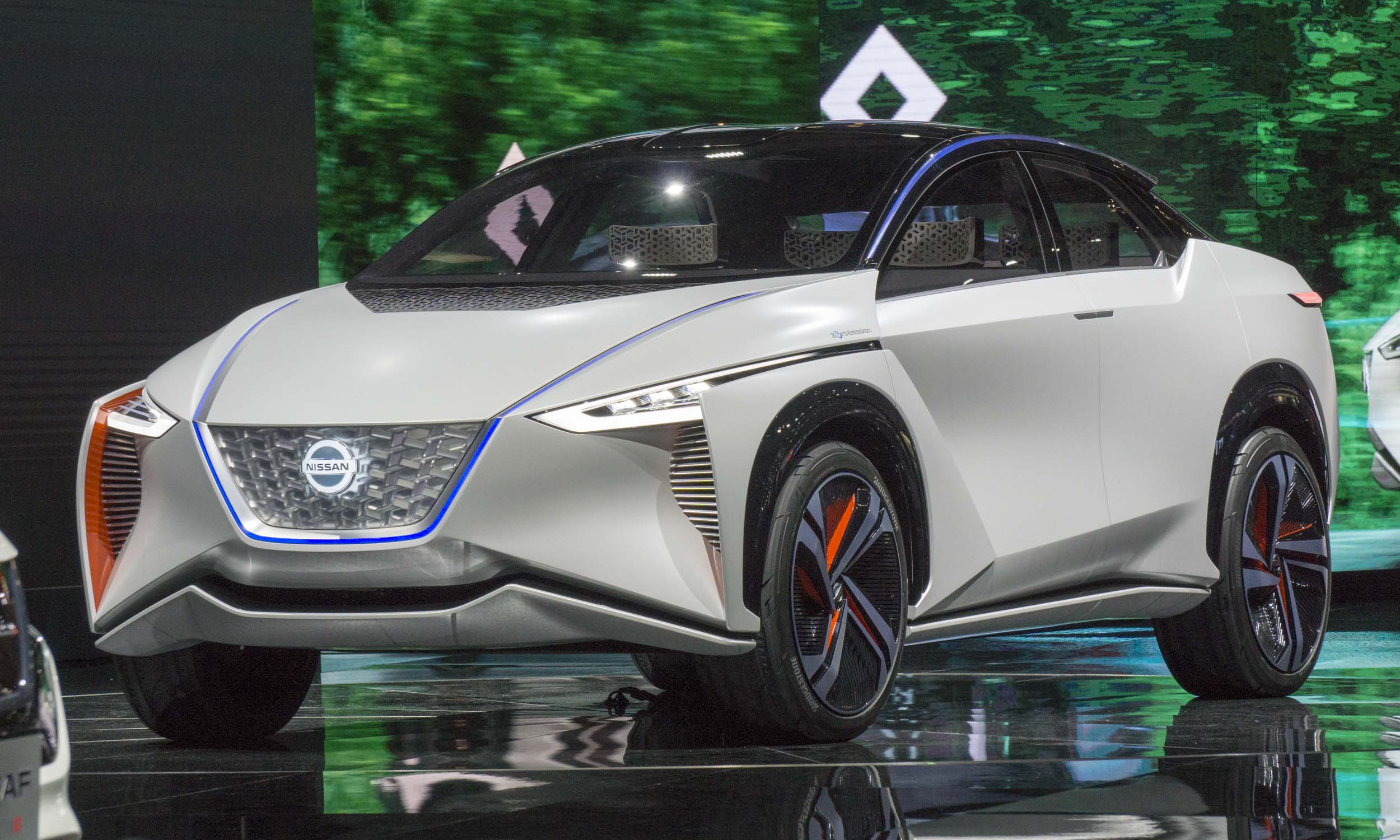 © Perry Stern, Automotive Content Experience
Nissan IMx Concept
Nissan debuted the IMx Concept in Tokyo, which derives its name from Intelligent Mobility Crossover, presenting a look at the future of Nissan’s Intelligent Mobility. Both electrification and artificial intelligence are changing the design and engineering of vehicles, and Nissan is looking for a greater connection between car and driver, even as the definition of driving evolves. The IMx Concept offers fully autonomous driving with the steering wheel stowed and seats reclined in ProPilot mode. 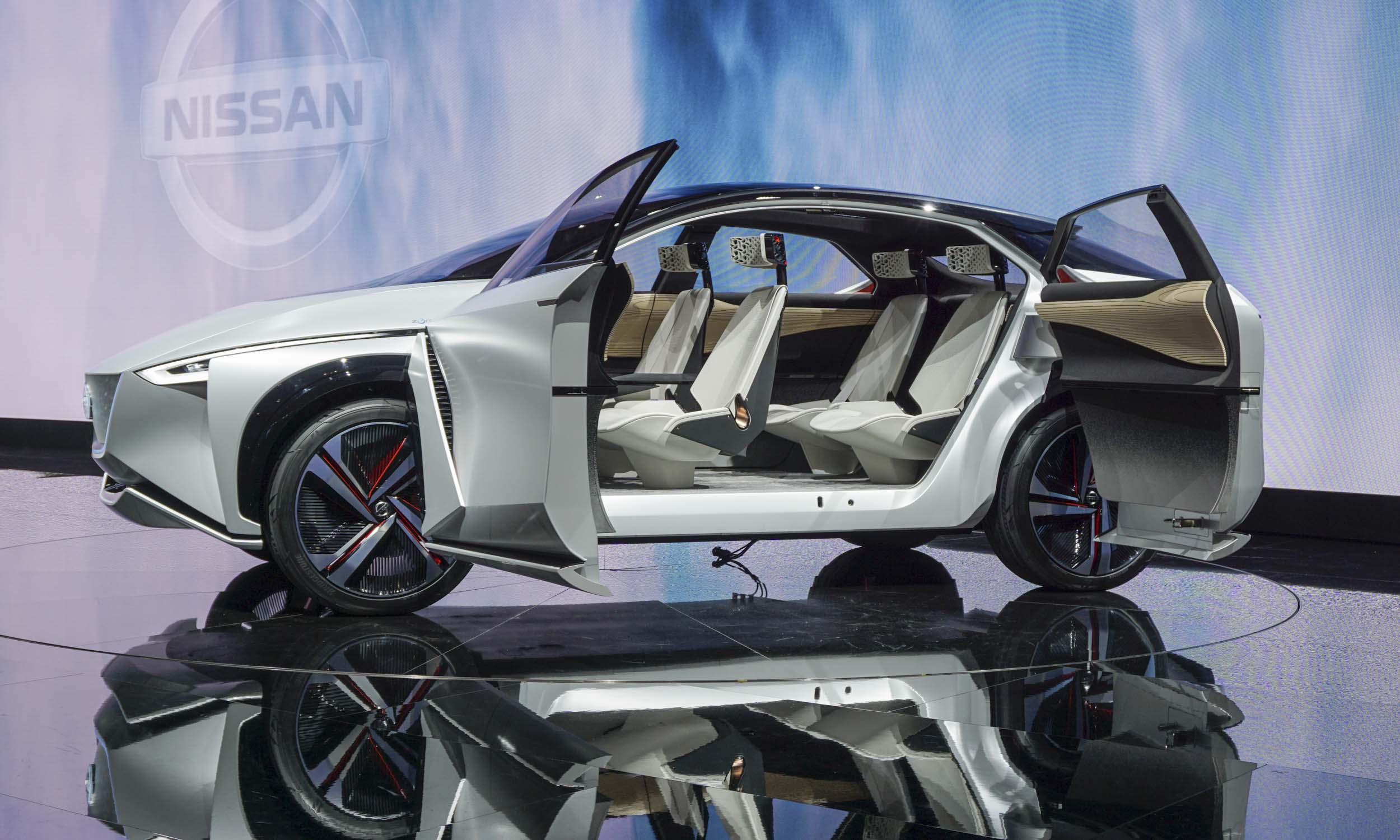 © Mike Meredith, Automotive Content Experience
Nissan IMx Concept
The IMx is powered by two high-output electric motors positioned at the front and the rear of the vehicle for all-wheel drive, producing a combined output of 429 horsepower and 516 lb-ft of torque with an estimated range of more than 366 miles on a single charge. The IMx Concept has a large-capacity battery yet the floor is still flat, with the rigid platform and low center of gravity contributing to responsive handling. The IMx Concept can drive autonomously for its owner, perform autonomously when the owner is absent and share power with vehicle-to-home or vehicle-to-building systems, as well as link to the local power grid. 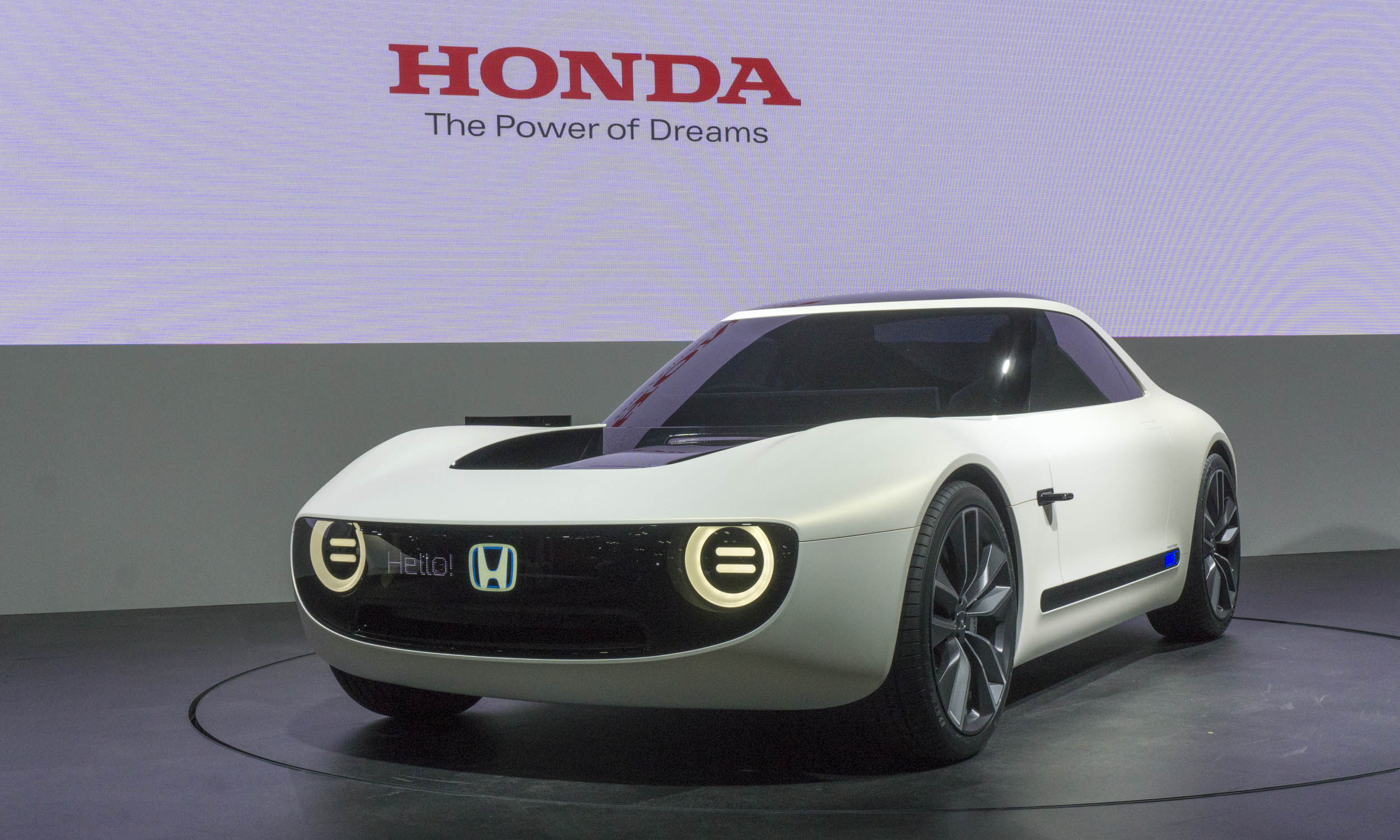 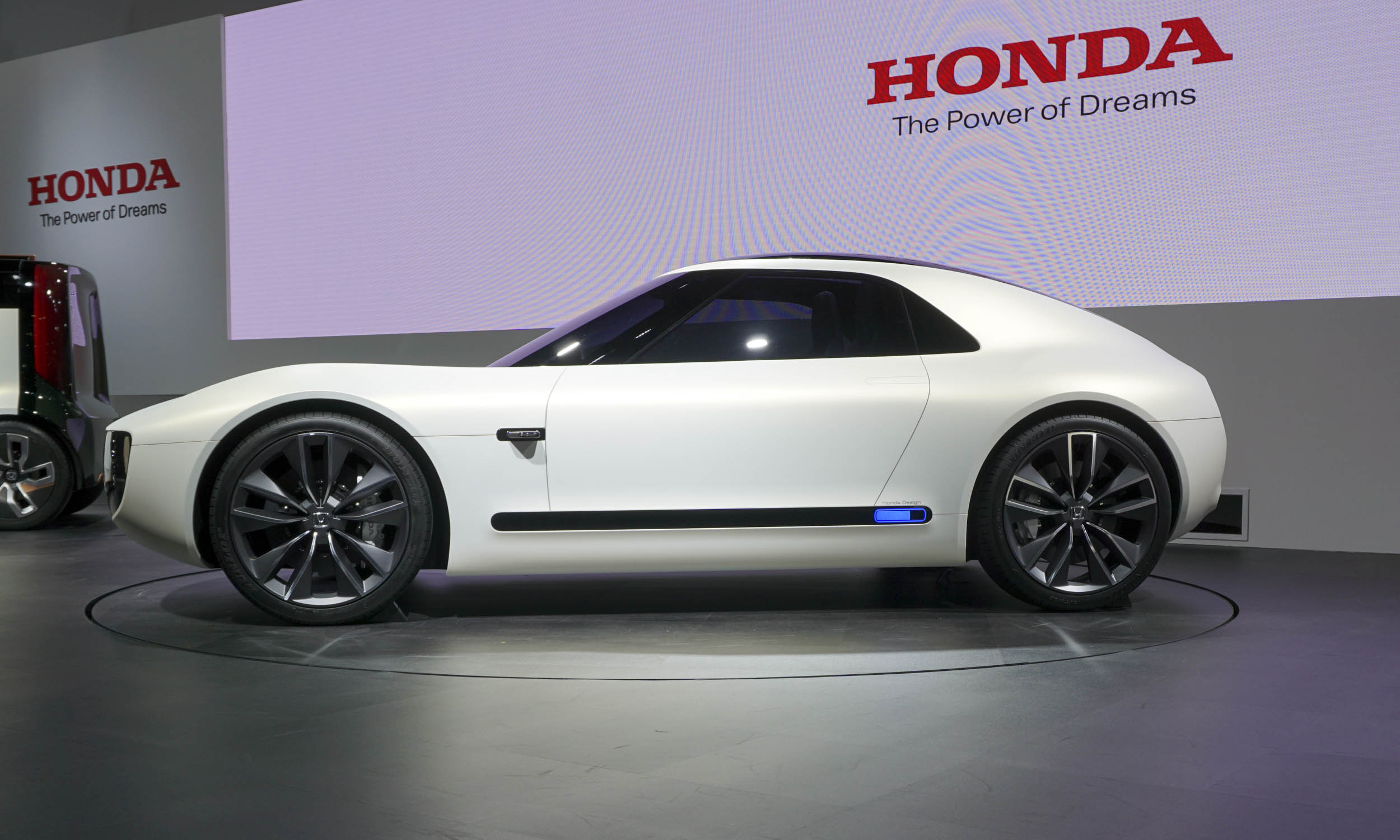 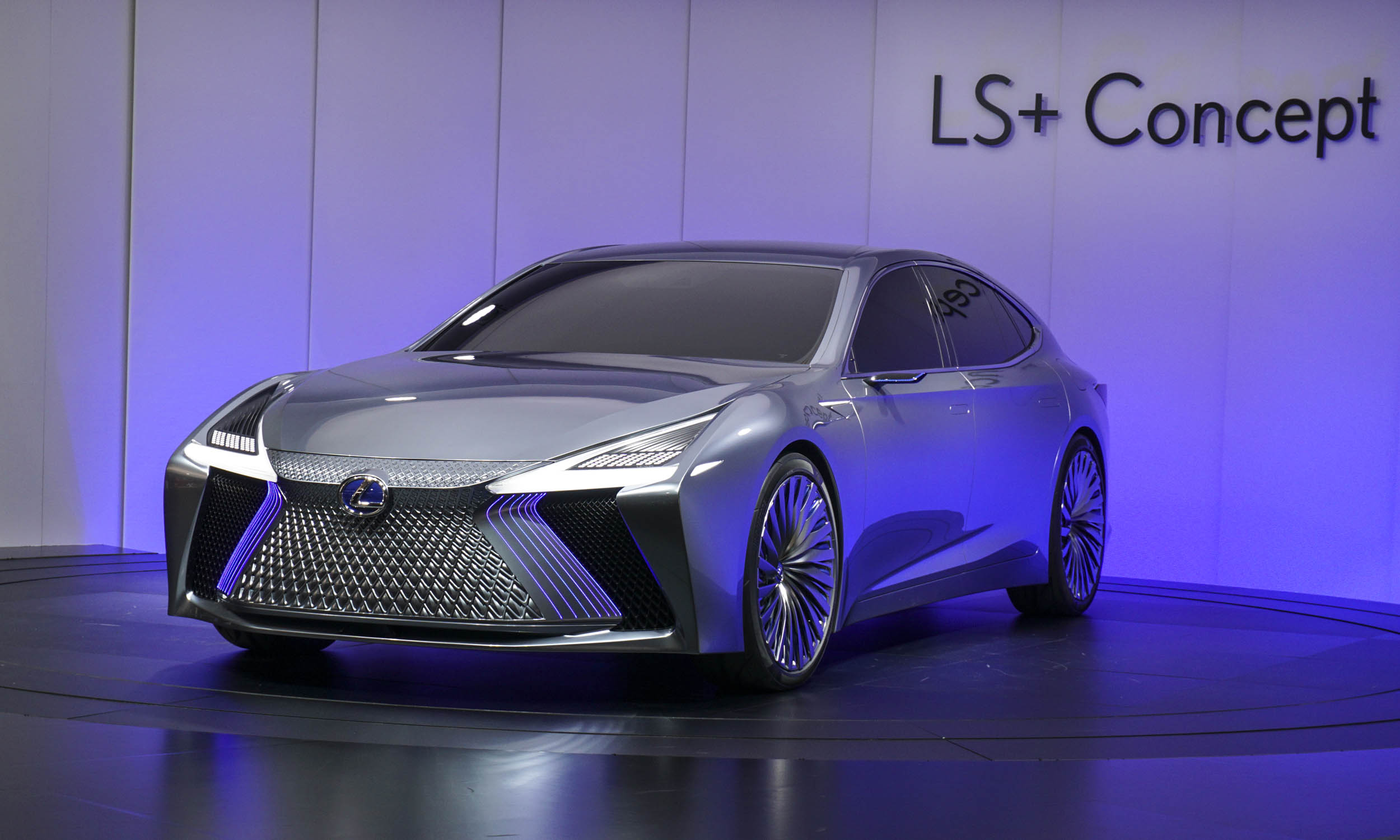 © Mike Meredith, Automotive Content Experience
Lexus LS+ Concept
Toyota’s luxury brand debuted the LS+ Concept at the Tokyo Motor Show as a look toward a future Lexus flagship, as well as the application of automated driving technologies in 2020. Lexus describes the LS+ Concept design as the future of L-finesse design language for the LS sedan, including the evolution of a wider Spindle Grille that improves both cooling and aerodynamics. 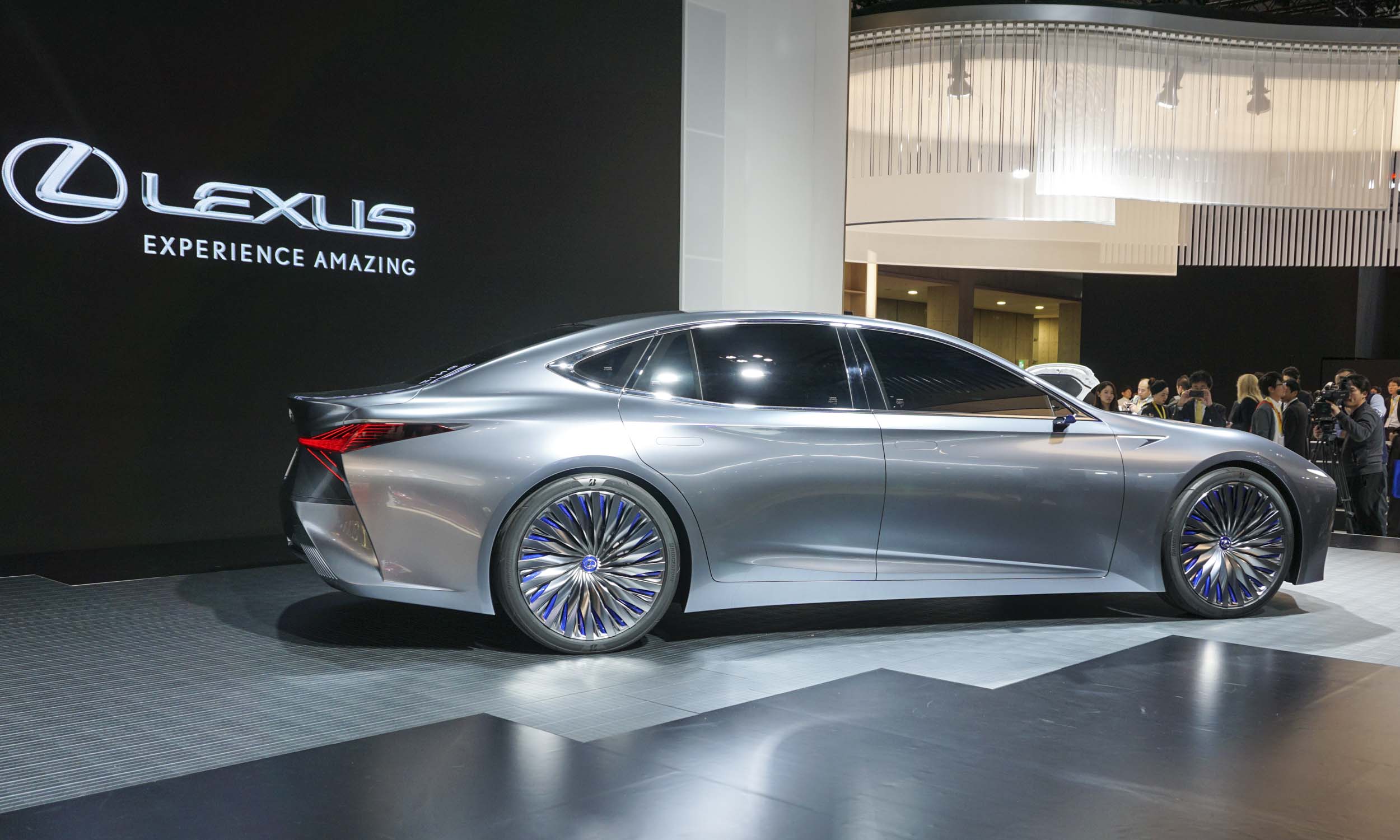 © Mike Meredith, Automotive Content Experience
Lexus LS+ Concept
The LS+ Concept includes the latest automated driving technologies that Lexus plans to apply in 2020, including Highway Teammate, which is intended for automated driving from entrance ramp to exit ramp. The LS+ Concept can also communicate with a data center to update software and allow new functions to be added remotely. 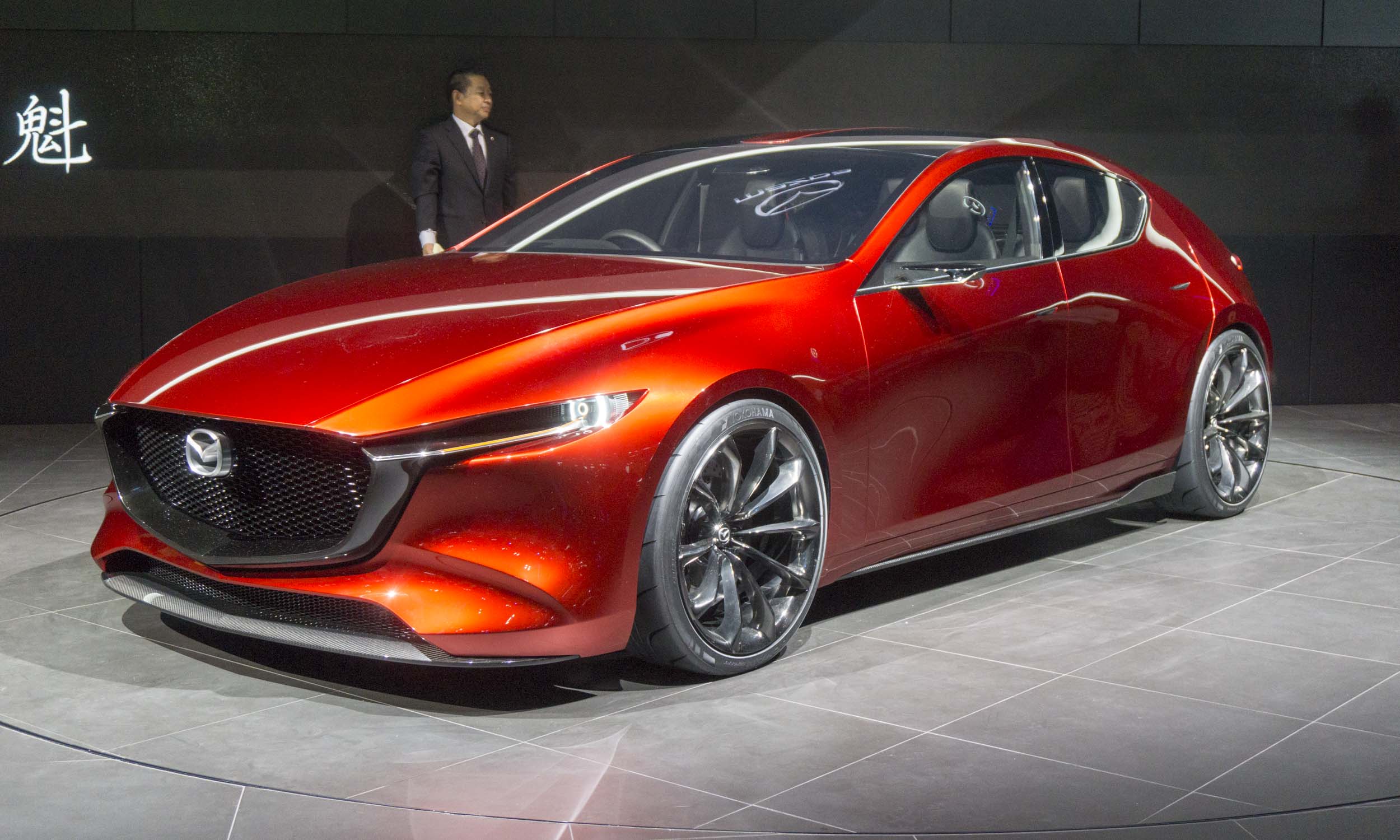 © Perry Stern, Automotive Content Experience
Mazda KAI Concept
One of two beautiful concept cars that Mazda debuted at this year’s Tokyo Motor Show, the KAI concept is likely the one that could reach production. We have been expecting to see a new Mazda3 on the horizon, and it appears that the KAI concept is the first indication of the company’s plans for the small hatchback. Although the shape is familiar, all the edges have been rounded to create a flowing line from the hood edge to the rear bumper. The KAI’s silhouette is the most telling evidence that this concept is likely the next Mazda3. Wheels are out at the corners with low overhangs in front and back. The sleek look is further enhanced by the flush door handles and cameras instead of sideview mirrors. 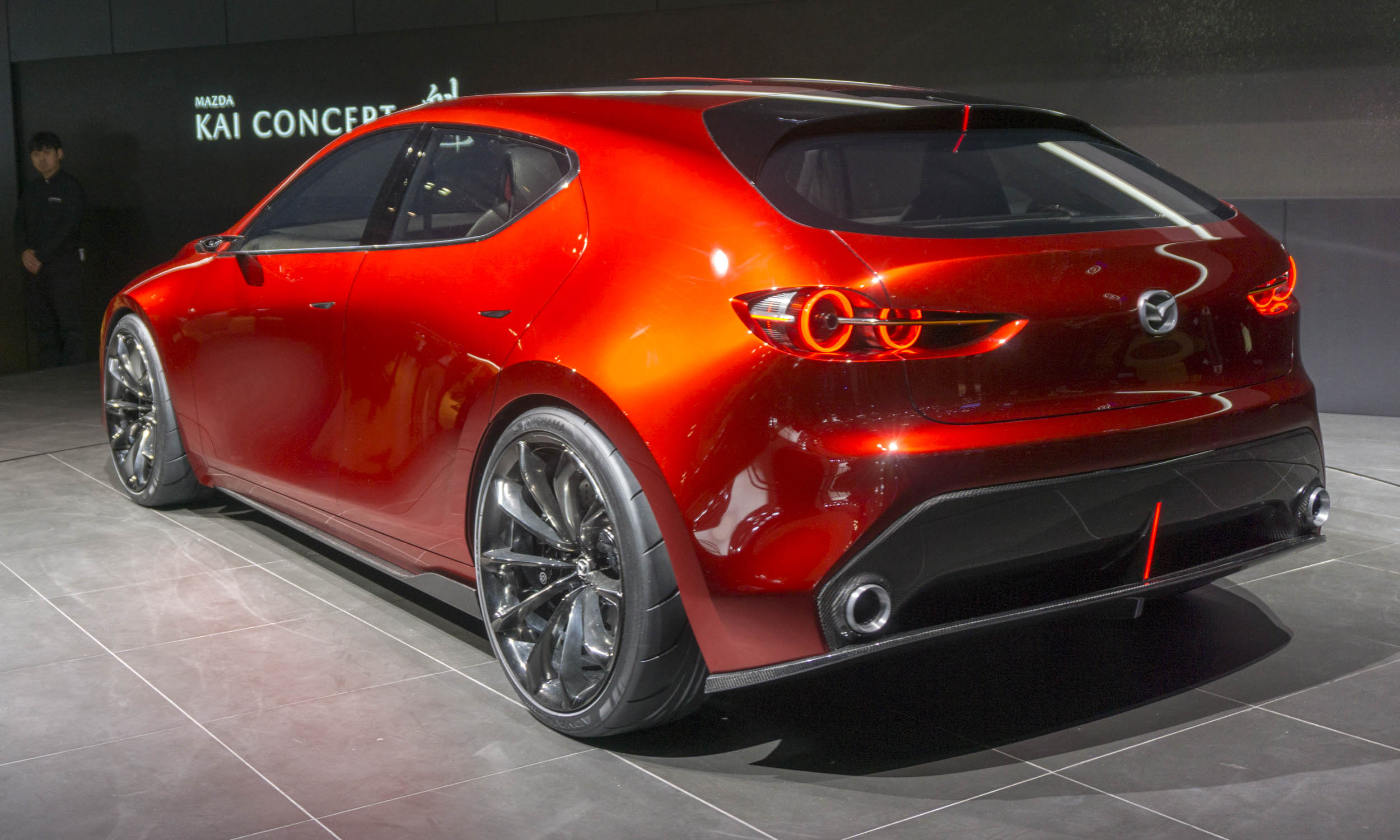 © Perry Stern, Automotive Content Experience
Mazda KAI Concept
The KAI Concept’s grille is similar to the styling first observed on the CX-5 and CX-9, but the hood seems to extend over the grille, creating a more aggressive stance. Headlights are recessed into the bodywork and almost give the impression of having burned through to be exposed. At the rear, carbon fiber surrounds the integrated dual exhaust outlets as well as a rear spoiler. Unlike many of its competitors, Mazda is sticking with the internal combustion engine rather than going the electrification route. The company has pinned its future on the new SKYACTIV-X engine that powers the KAI Concept. Designed to provide diesel-like fuel efficiency in a gasoline-powered engine, this new technology will be the first instance of a gasoline engine that uses compression ignition in a production vehicle. 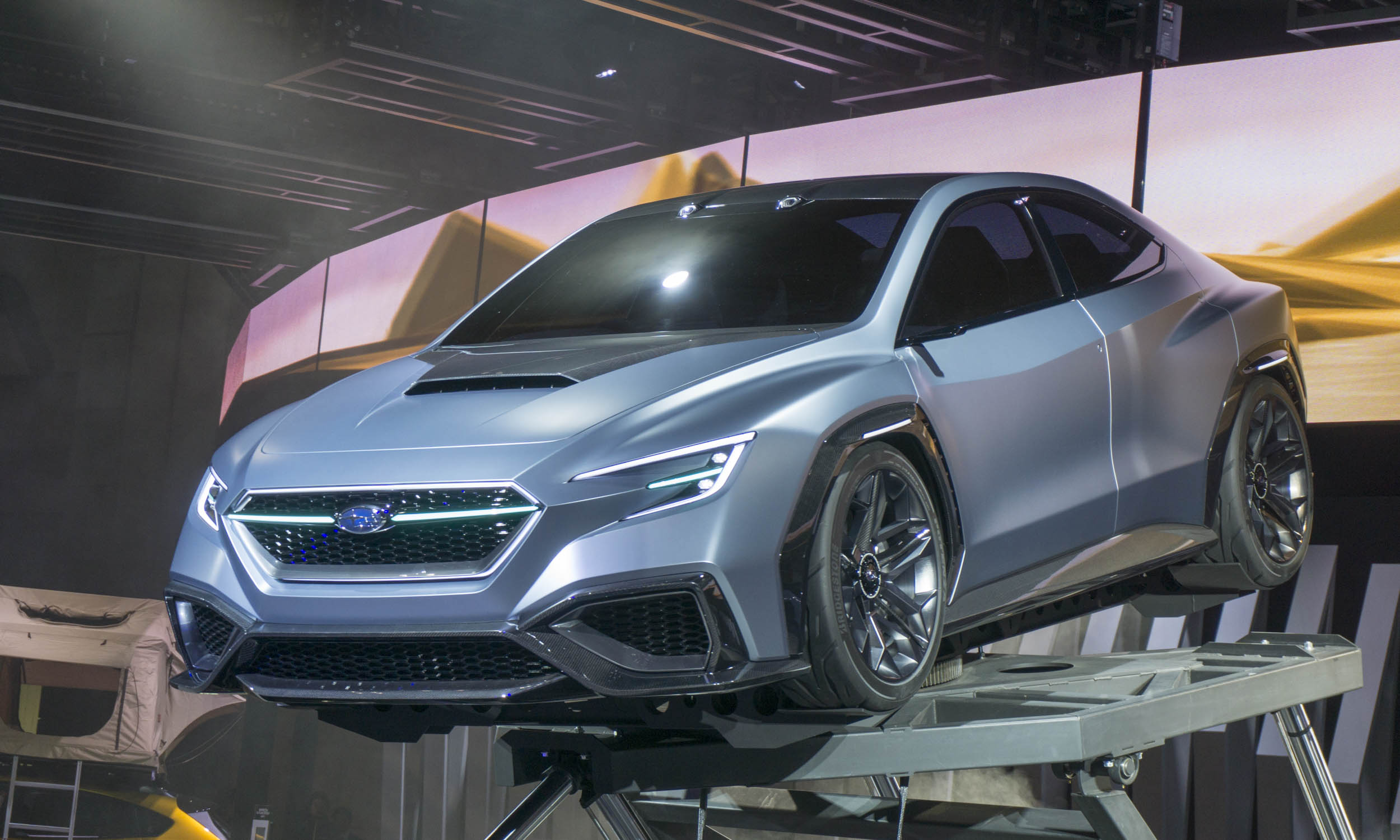 © Perry Stern, Automotive Content Experience
Subaru VIZIV Performance Concept
Subaru pulled the wraps off its latest concept vehicle at this year’s Tokyo show — a 4-door performance sedan. Called the Subaru VIZIV Performance Concept, this sleek four door could be a first look at the next-generation WRX. Although this VIZIV Performance Concept is a four door, the lines are more indicative of a sport coupe than a sedan. The roofline drops dramatically from the B-pillar, which gives the car its coupelike proportions. The large carbon fiber fender flares surrounding 20-inch wheels bolster the concept’s bold look. Up front the VIZIV sports a signature Subaru grille flanked by “hawkeye” headlights. A light bar splits the grille and ties into the headlights, creating an interesting horizontal line across the front. Big air intakes and a hood scoop suggest a powerful engine under the hood. 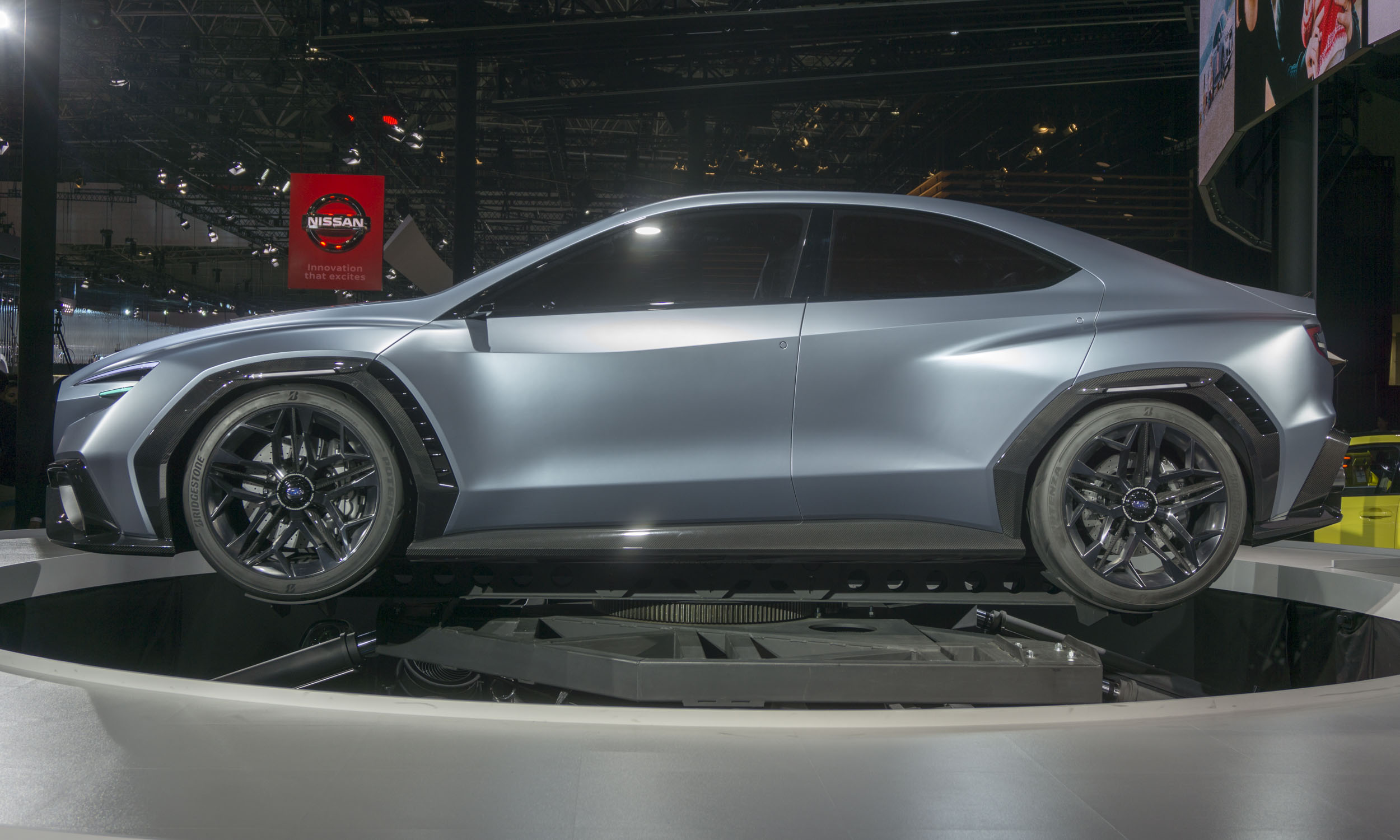 © Perry Stern, Automotive Content Experience
Subaru VIZIV Performance Concept
While the Impreza is all new, the high-performance WRX and STI variants remain on the older platform for 2018. Subaru has said that the next generations of WRX and STI are not expected until 2020, but it’s certainly not too soon to start teasing possible design concepts. After driving the new Impreza a few months ago, we came away impressed with the new platform and are excited about the prospect of high-performance models built on this new chassis. We hope the VIZIV isn’t merely a tease — in the past, Subaru has shown high-performance concepts that were considerably toned down by the time they reached production. 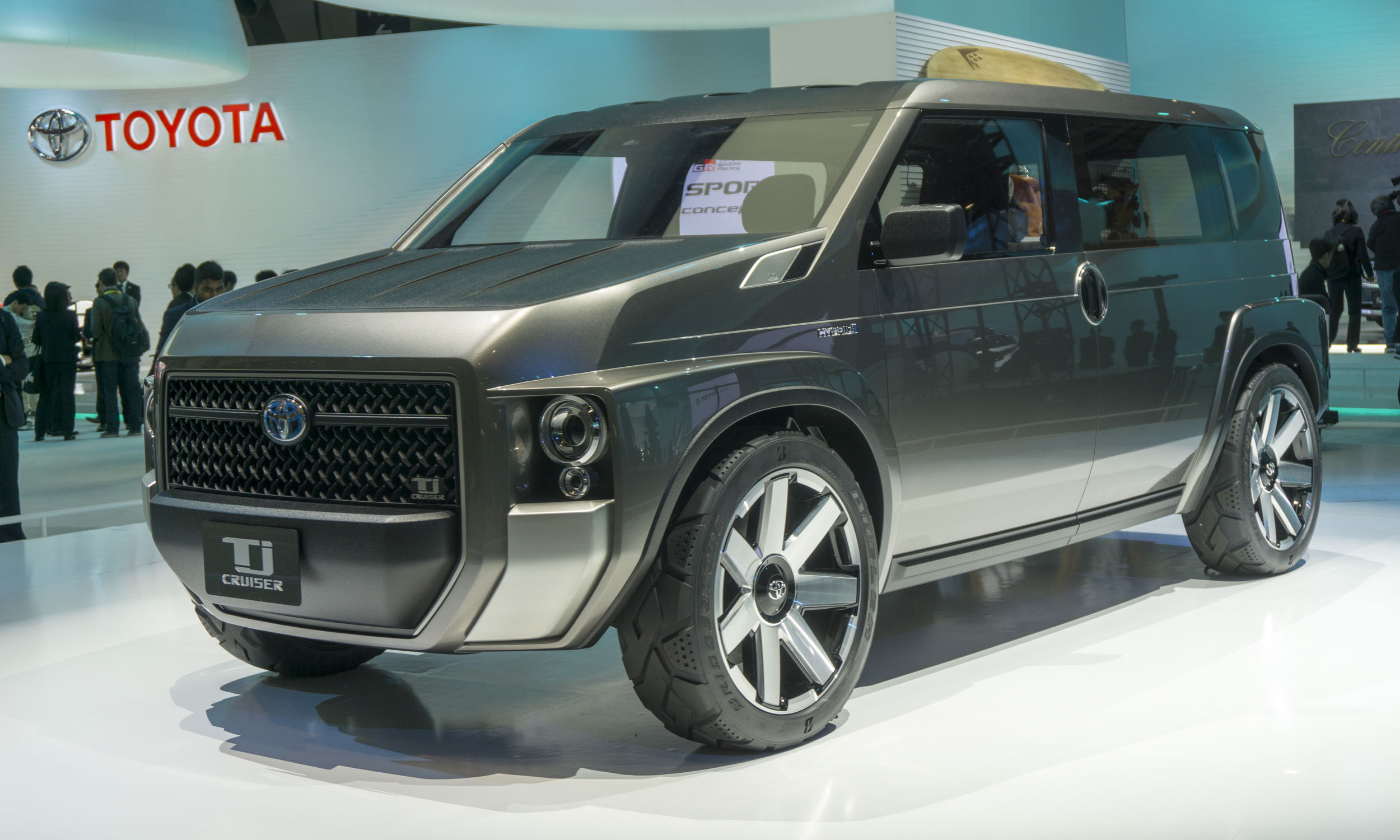 © Perry Stern, Automotive Content Experience
Toyota TJ Cruiser
American drivers are familiar with Toyota’s off-road-ready FJ Cruiser; however, the TJ Cruiser is a different take on an SUV. Described as a combination of SUV and cargo van, the TJ Cruiser has a bold yet boxy presence. A special paint coating on the hood, roof and fenders resists scratches and dirt. According to Toyota, the T of FT stands for toolbox, indicating that this vehicle offers plenty of utility, while the J stands for joy, which Toyota says is “in reference to the joy of visiting various places by car.” Toyota typically uses the Cruiser moniker on SUVs, but it fits this concept thanks to big tires and raised ground clearance. The TJ Cruiser features a front-wheel/four-wheel drive system powered by a 2.0-liter hybrid powertrain. 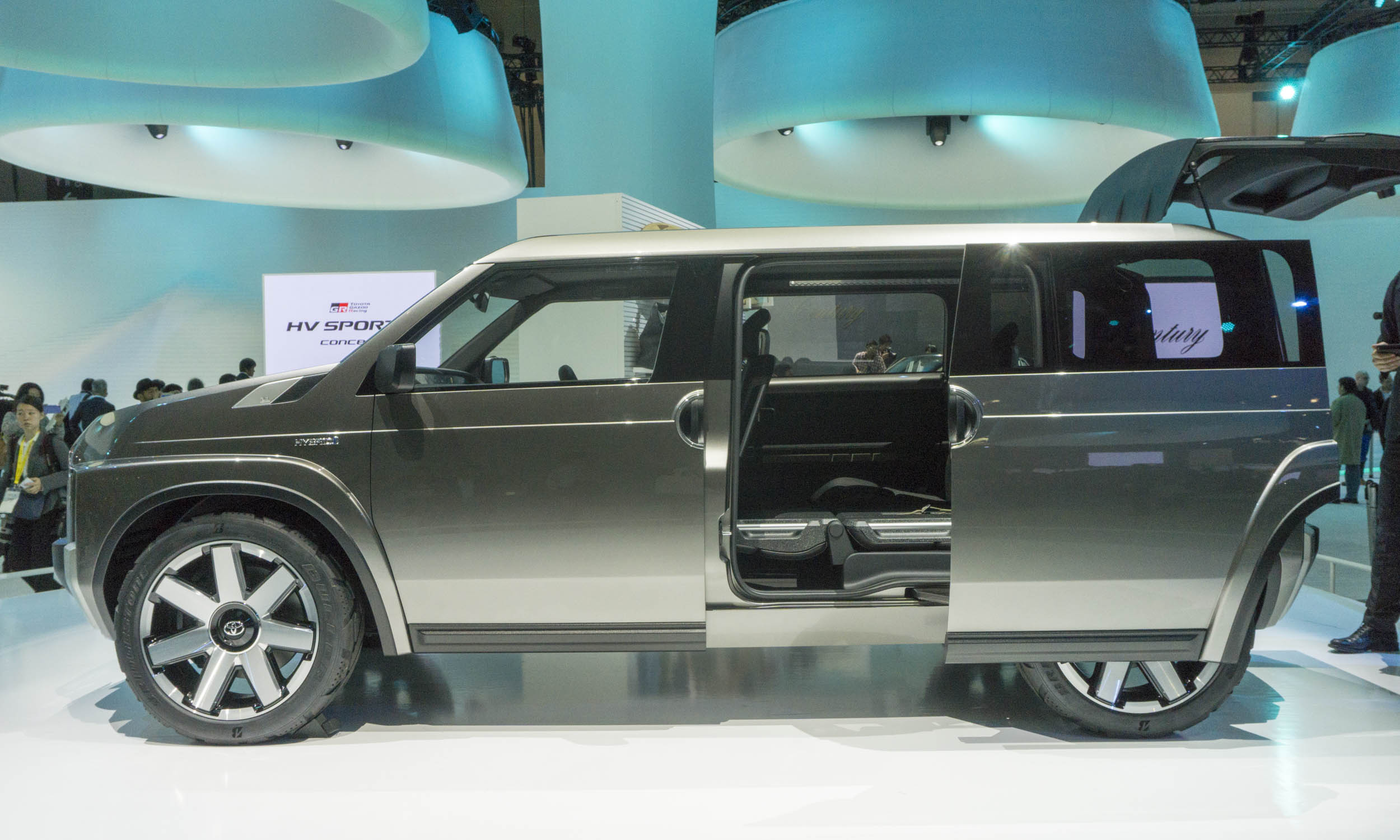 © Perry Stern, Automotive Content Experience
Toyota TJ Cruiser
The square cabin of the TJ provides a roomy, useful interior. With seating for four, the TJ has plenty of capacity for cargo of all shapes and sizes. If needed, all seats (except the driver’s seat) can be folded, providing a continuous flat cargo floor that can handle items almost 10 feet long. The seatbacks and cargo floor are hard plastic and have plenty of spots to secure gear. A large rear cargo opening and dual sliding doors make loading a breeze. 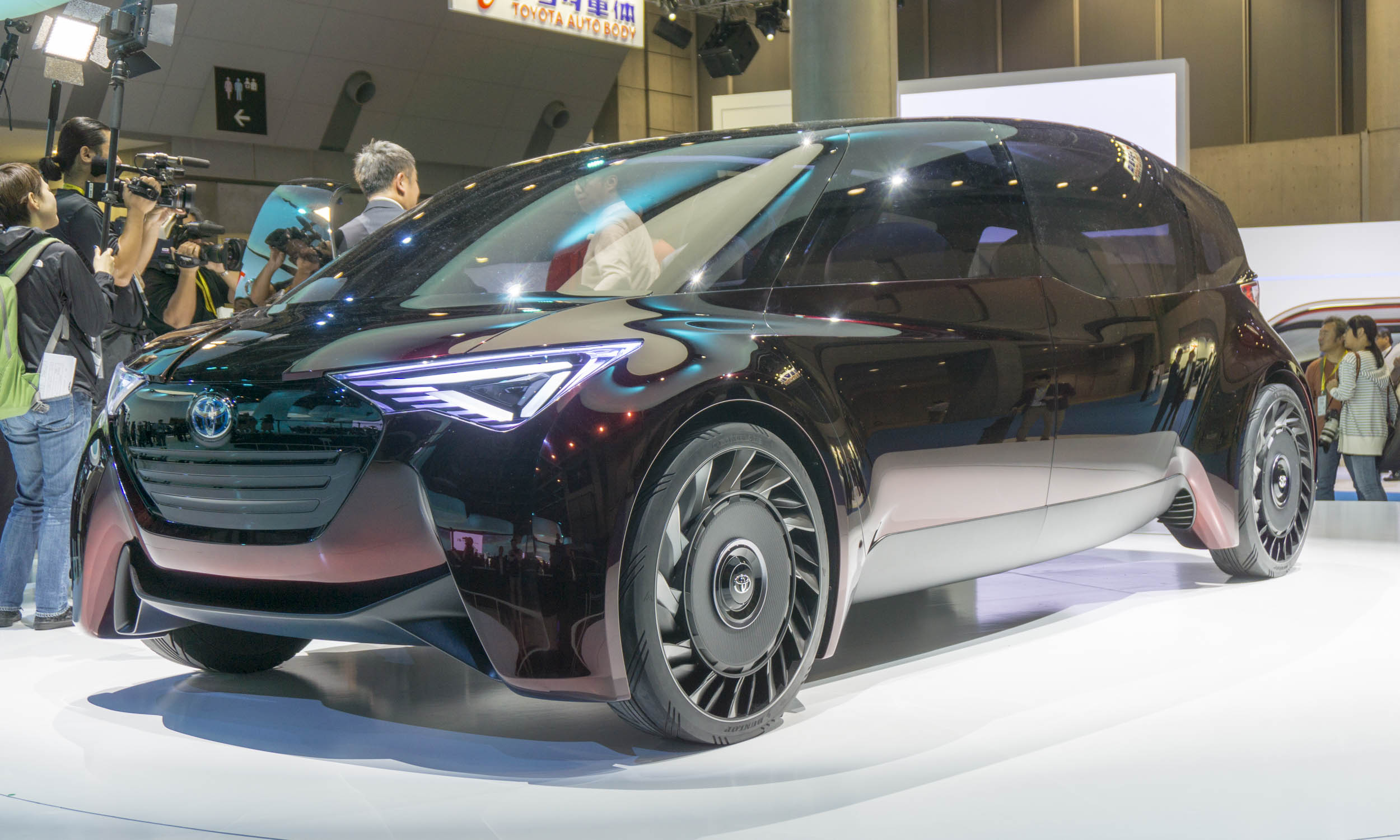 © Perry Stern, Automotive Content Experience
Toyota FINE-Comfort Ride
This unique concept vehicle might indicate the future of the minivan. The FINE-Comfort Ride is more than merely a unique design exercise — it draws power from an advanced fuel-cell system. The fuel cell can be filled quickly, and Toyota suggests the FINE-Comfort could have a range of more than 621 miles (1000 km). Not only does this offer excellent efficiency with no harmful emissions, it also creates a larger, more flexible interior. Thanks to in-wheel motors, the FINE-Comfort Ride doesn’t need space for a central motor or drivetrain of any kind. 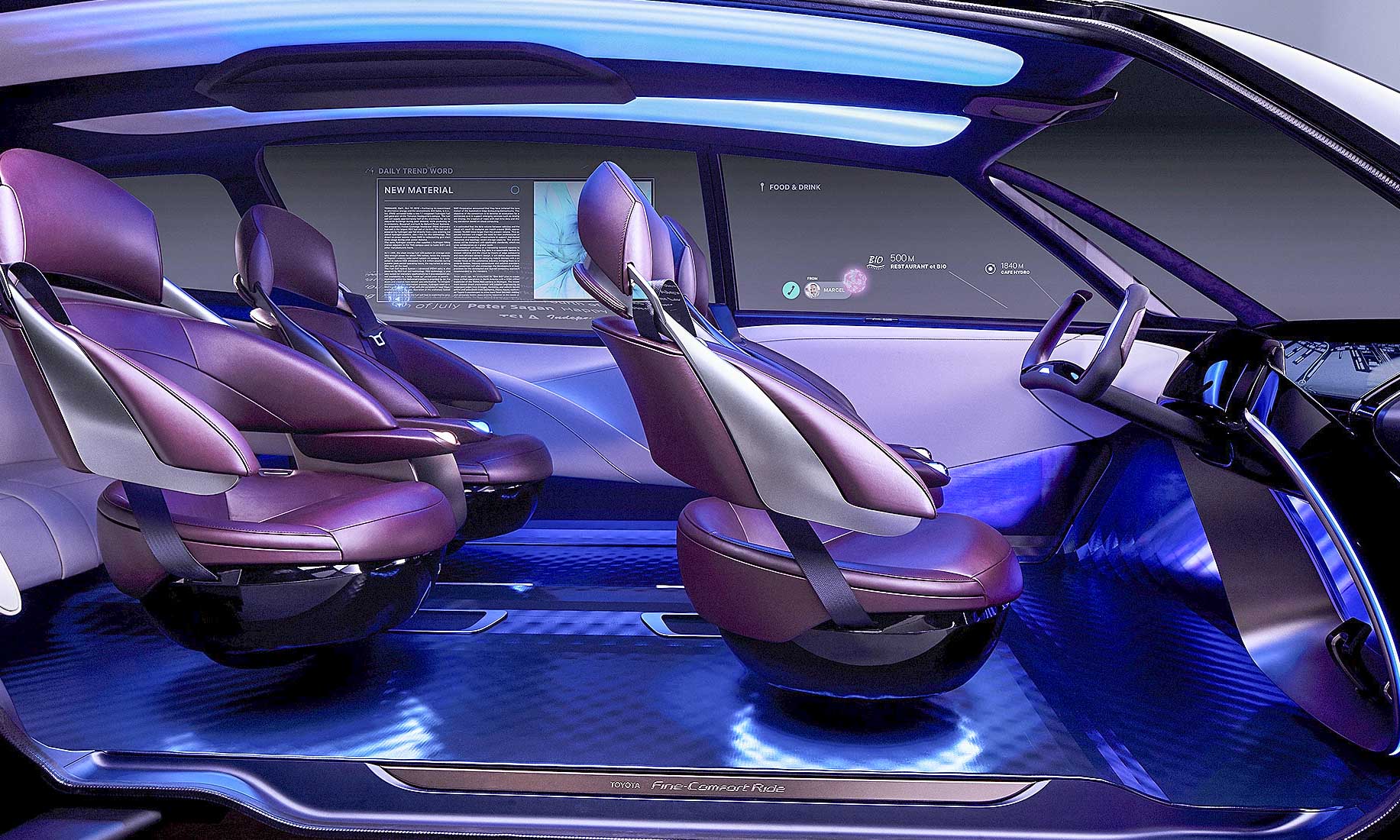 © Toyota Motor Corporation
Toyota FINE-Comfort Ride
With in-wheel motors, the wheels can be located at the corners, providing better ride and handling as well as creating a more flexible interior space. The FINE-Comfort Ride has seating for up to six occupants. Touch displays project around the driver and passenger seats for the ultimate interactivity. As Toyota points out in its press release, “the vehicle embodies future mobility that provides additional value other than movement to the passengers and is not simply just a ‘ride.’” 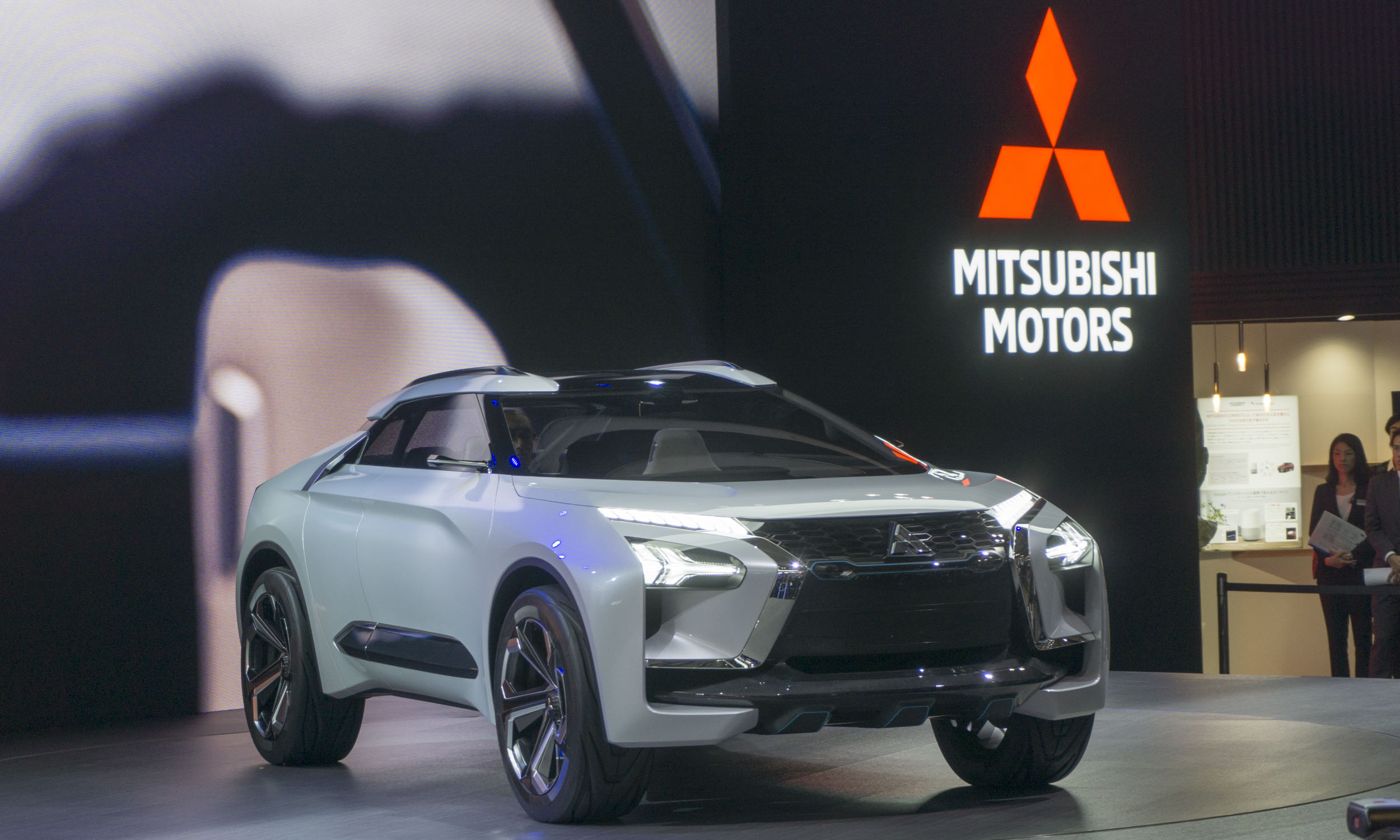 © Perry Stern, Automotive Content Experience
Mitsubishi e-Evolution Concept
The future of Mitsubishi — at least in America — has been called into question on several occasions due to dwindling vehicle offerings. However, the Japanese automaker is looking to renew its brand and sees the introduction of this unique SUV concept at the Tokyo Motor Show as a way of illustrating its path forward. The e-Evolution Concept pays homage to the brand’s proven off-road performance vehicles with a high-performance 4WD system. Motivation comes from high-torque, high-performance electric motors with high-capacity batteries that deliver the type of instantaneous performance not possible with an internal combustion engine. 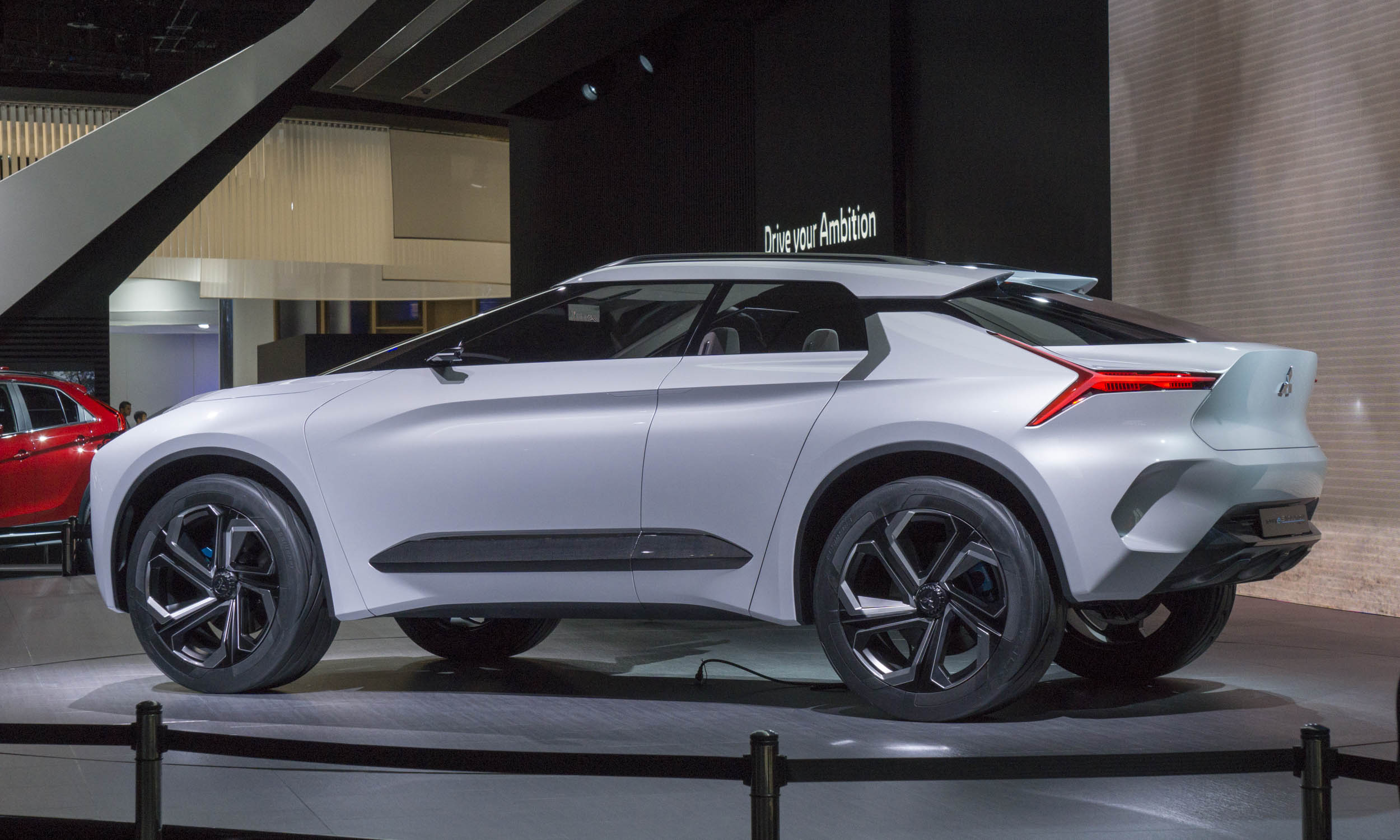 © Perry Stern, Automotive Content Experience
Mitsubishi e-Evolution Concept
The e-Evolution Concept’s 4-wheel-drive system uses a single motor to drive the front wheels and two motors in the rear. A Dual Motor Active Yaw Control uses the two rear motors independently to improve handling and performance. The e-Evolution Concept also employs an artificial intelligence system that can read changes in the road and traffic conditions, as well as the driver’s intent. A coaching function can increase the driver’s skills and ultimately change the level of assistance based on the driver’s abilities. This unique-looking crossover remains a concept for now; perhaps some of these technologies will eventually make their way into a production model. 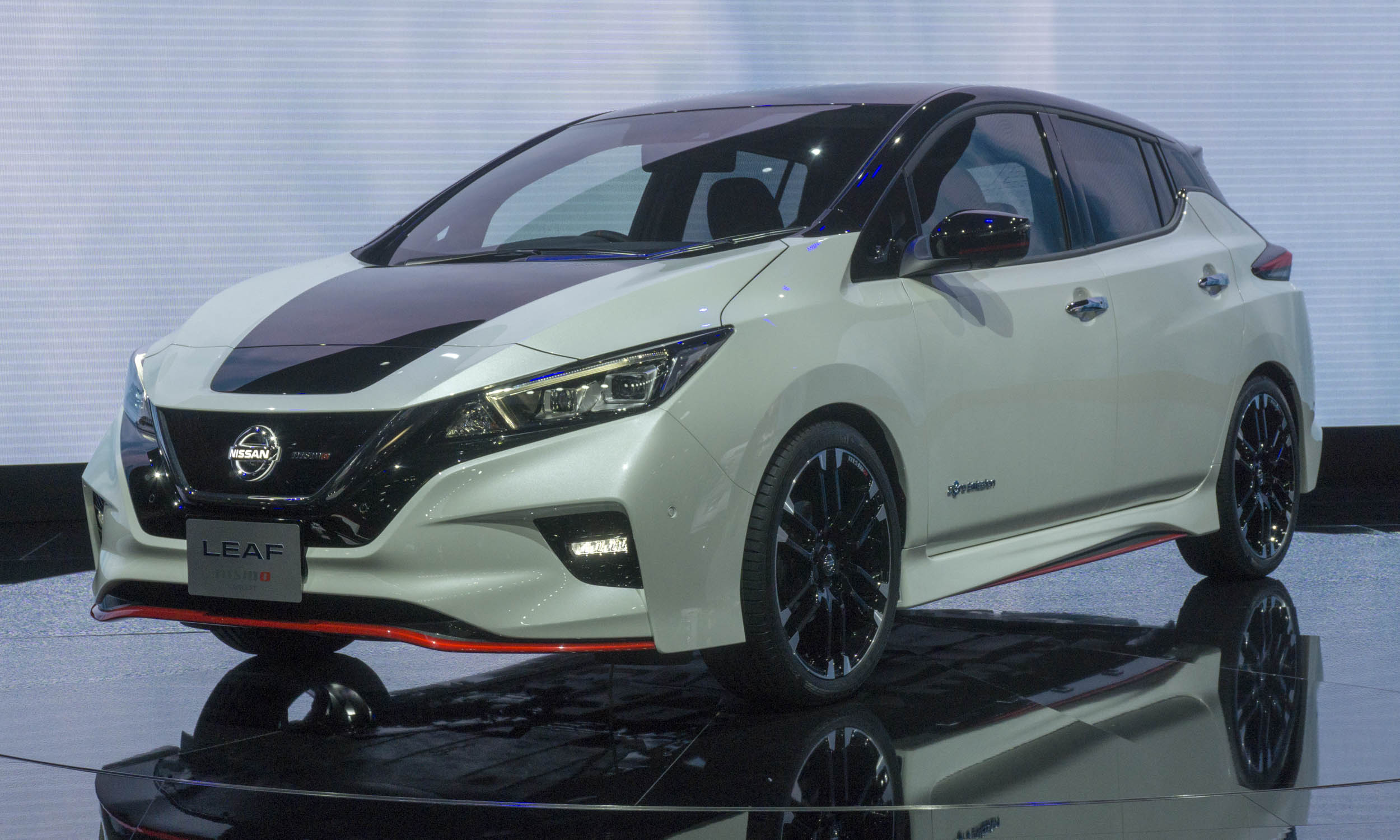 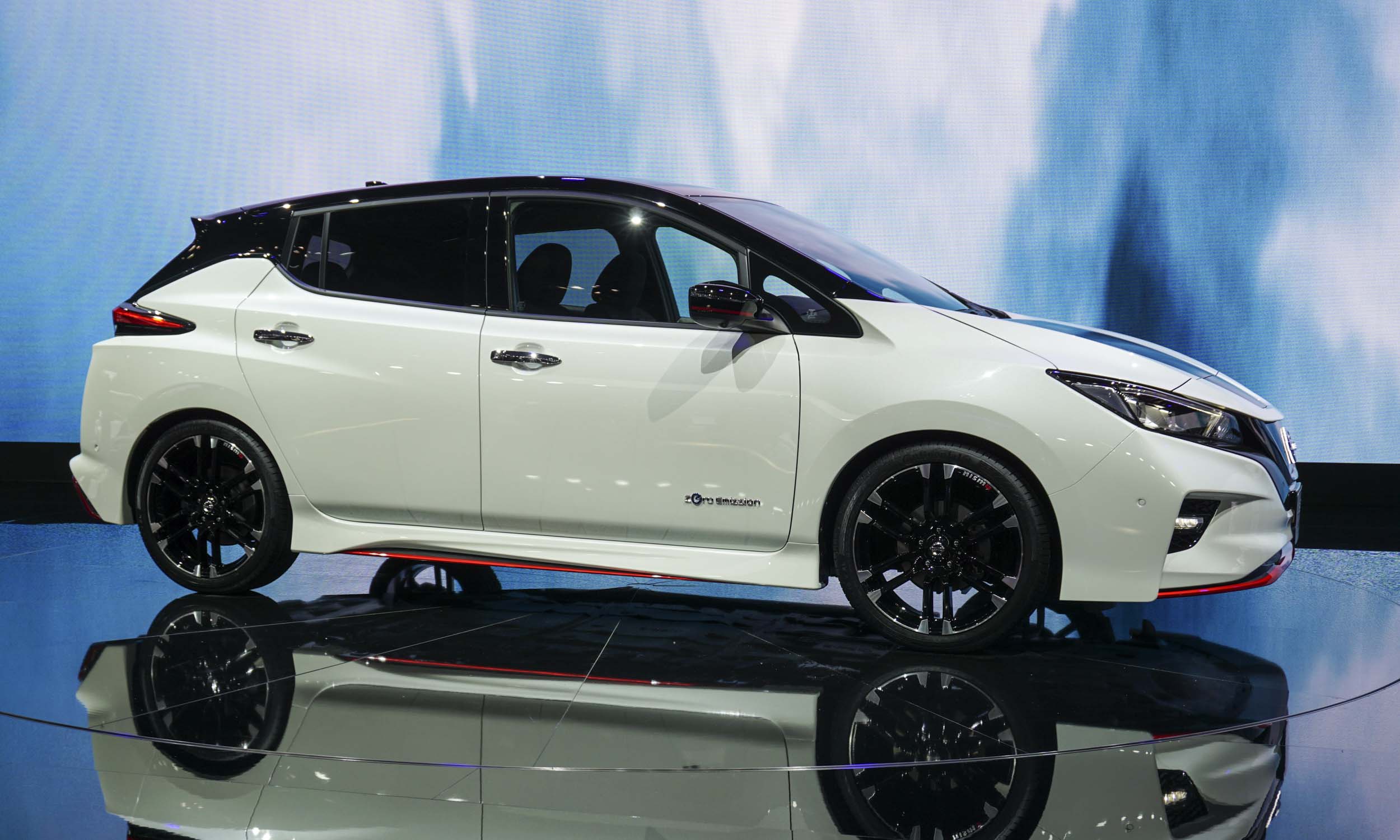 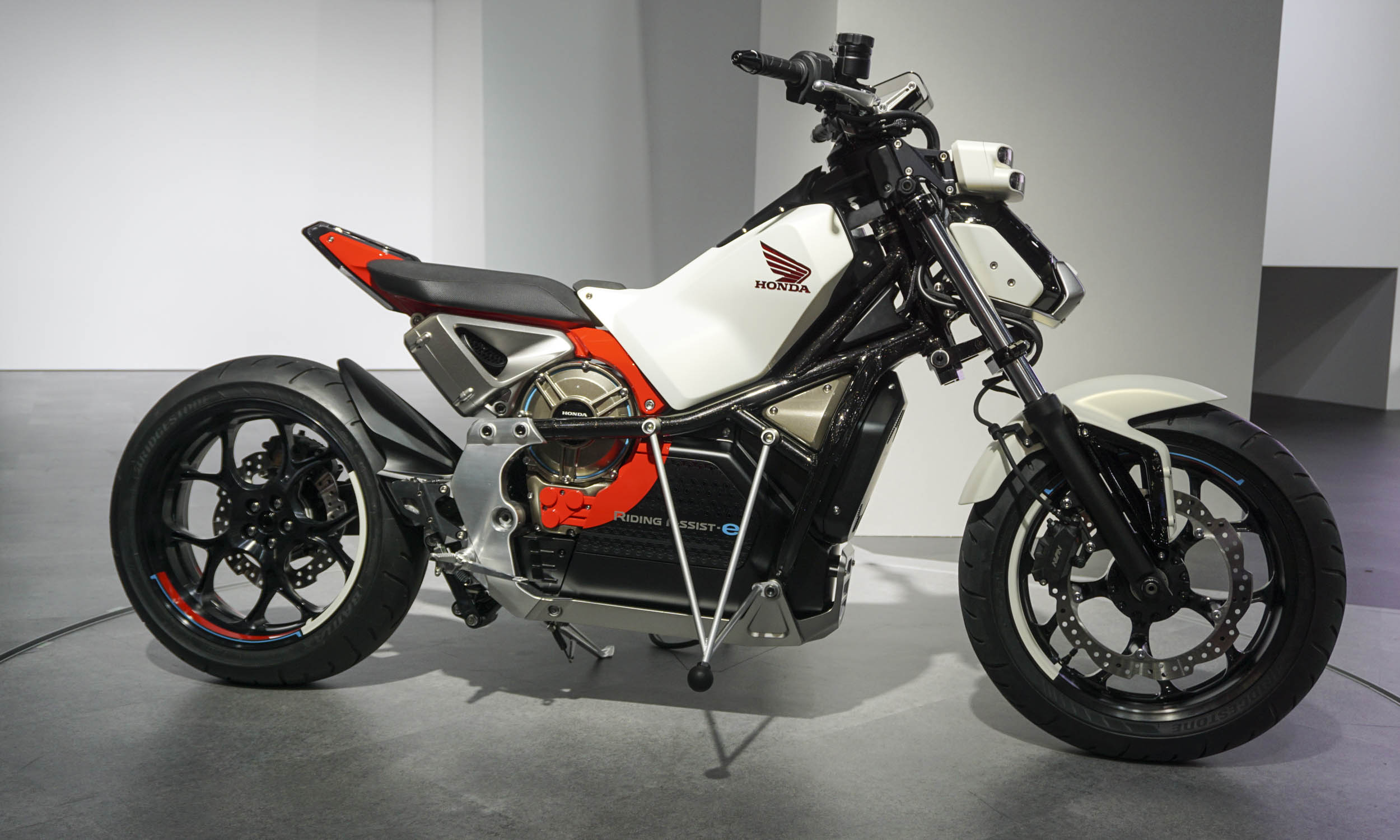 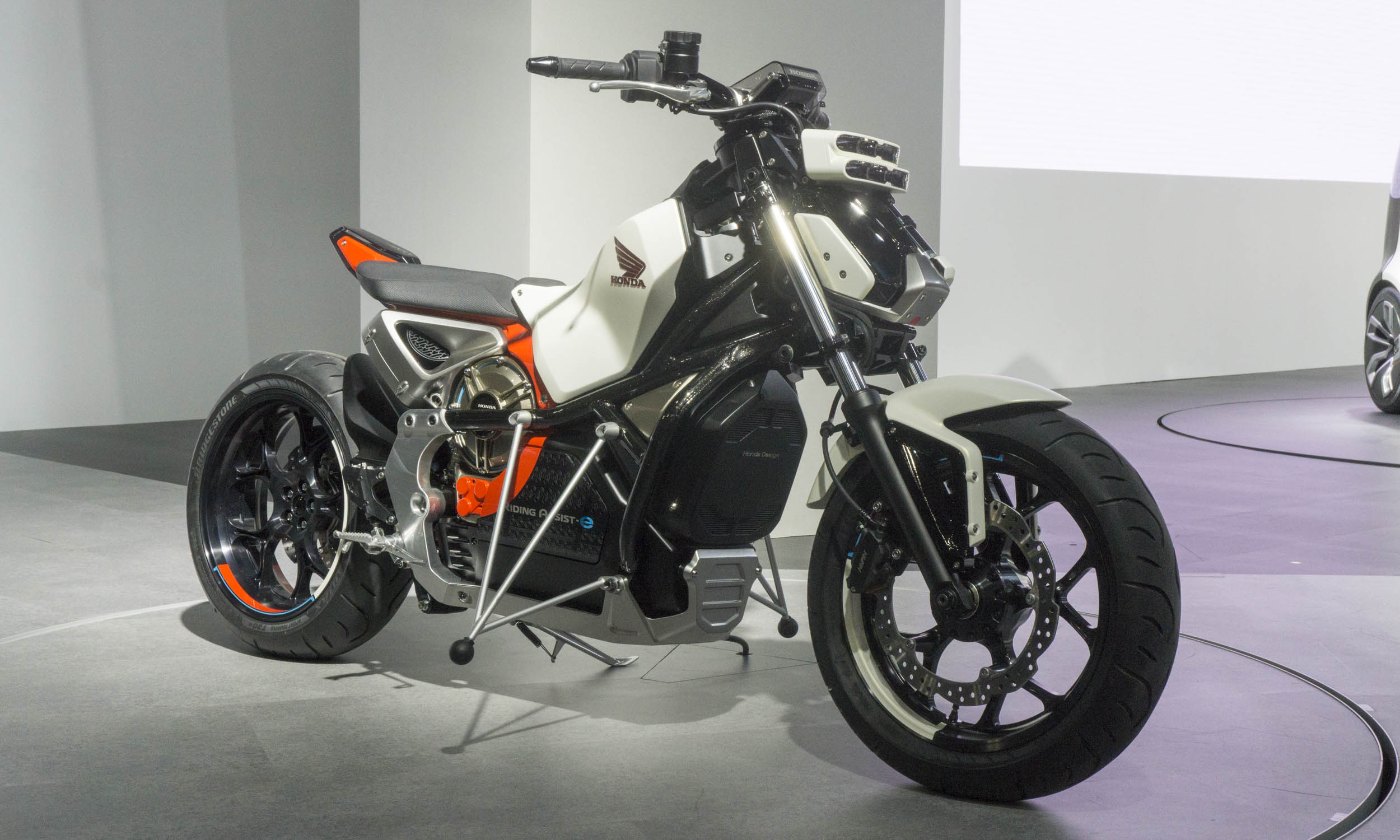 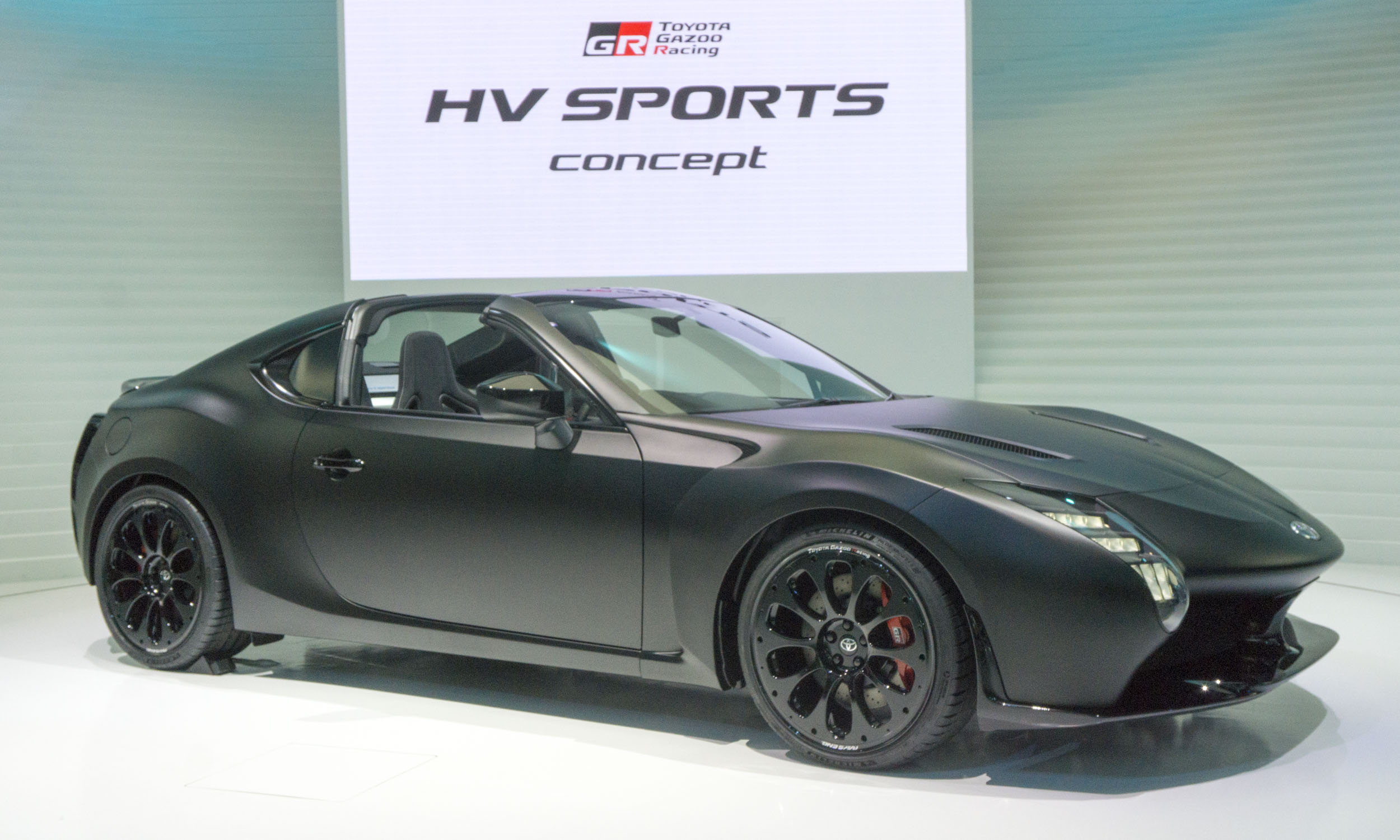 © Perry Stern, Automotive Content Experience
Toyota GR-HV Sports Concept
One look and it’s obvious that this concept is based on the sporty Toyota FR-S; however, the GR-HV also is clearly a bit different than the production model. Most noticeable are the unique headlights and targa top — the latter would be a great addition to the production FR-S. The GR-HV features a high-performance hybrid powertrain based on the Toyota Hybrid System-Racing in the automaker’s TS050 hybrid race car. Toyota hasn’t released any details about the powertrain in this concept vehicle, so we must assume it would be a proper blend of efficiency and performance. 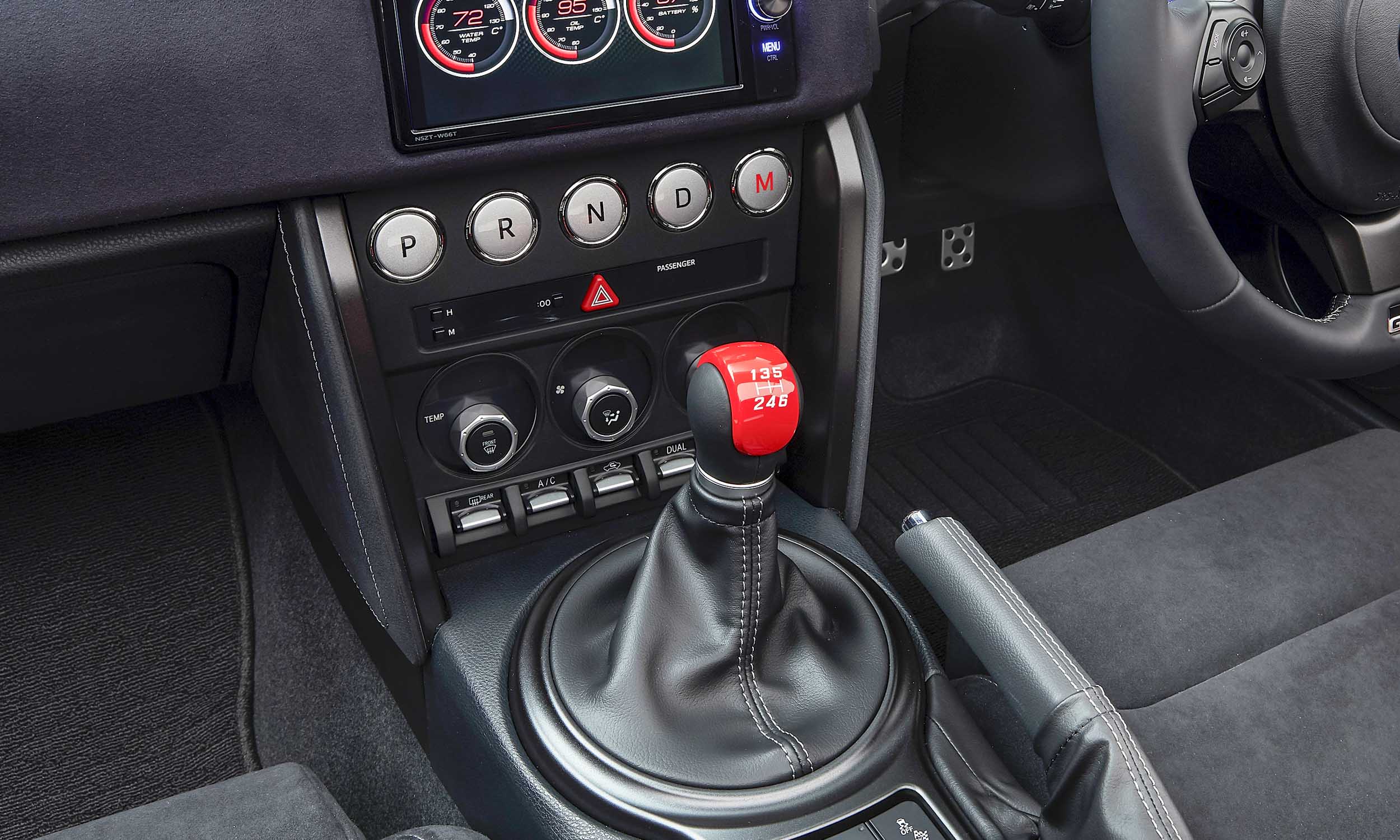 © Toyota Motor Corporation
Toyota GR-HV Sports Concept
Most unusual in the GR-HV is the combination of a manual gear shift lever as well as pushbuttons on the dashboard to activate the automatic transmission. Drivers can select D from the buttons, or go with a manual mode that allows clutchless shifting in a typical H pattern with the gear shift; however, the transmission is an automatic, regardless of which method is employed for shifting.