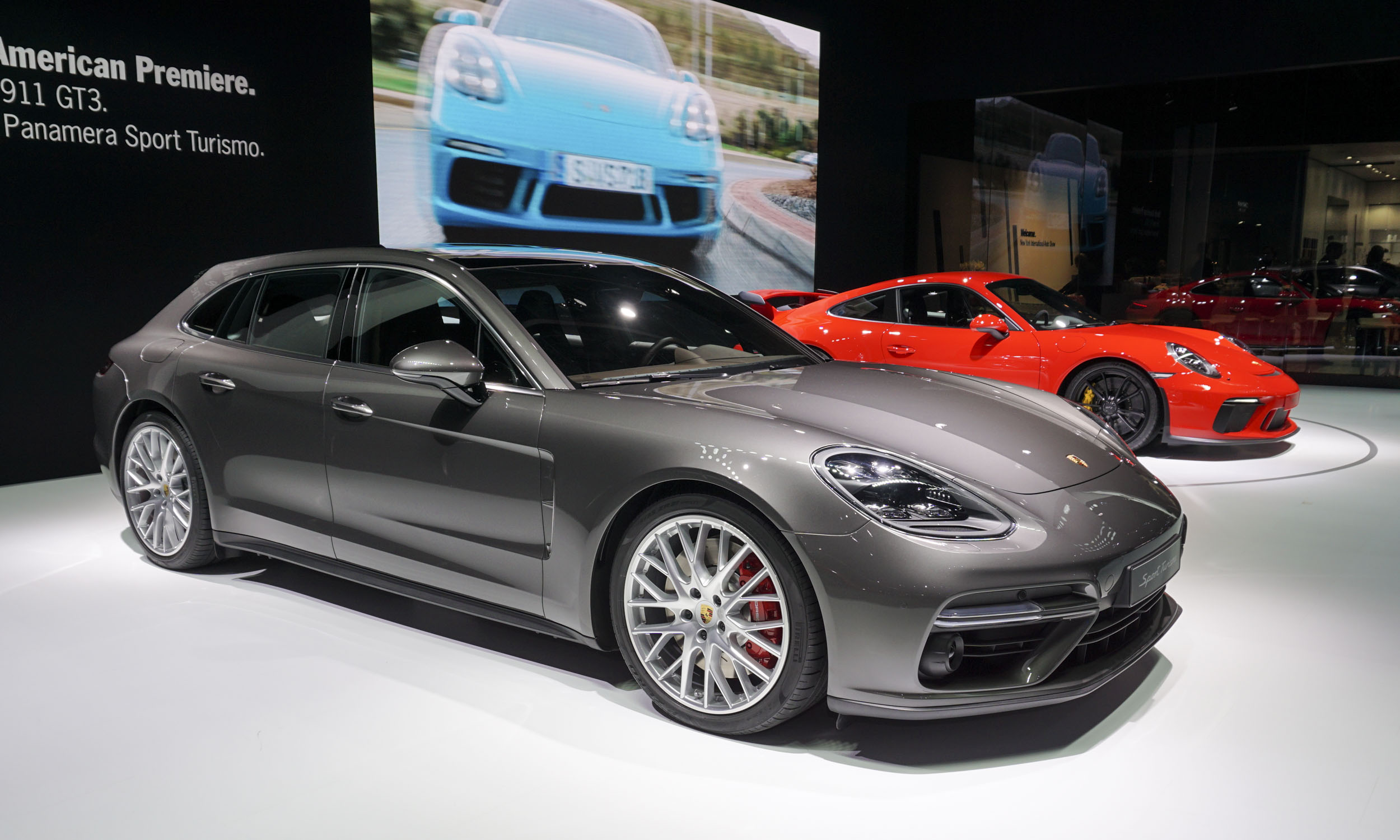 Top Cars
SUV and crossover debuts may have received a lot of attention at this year’s New York Auto Show, but there were also a good number of important new car debuts. From the new fuel-efficient Honda Clarity models to the high performance Porsche 911 GT3 and the special edition Maserati Ghibli Nerissimo, the new car debuts covered the spectrum. We take a look at the car premiere highlights from the 2017 New York Auto Show. 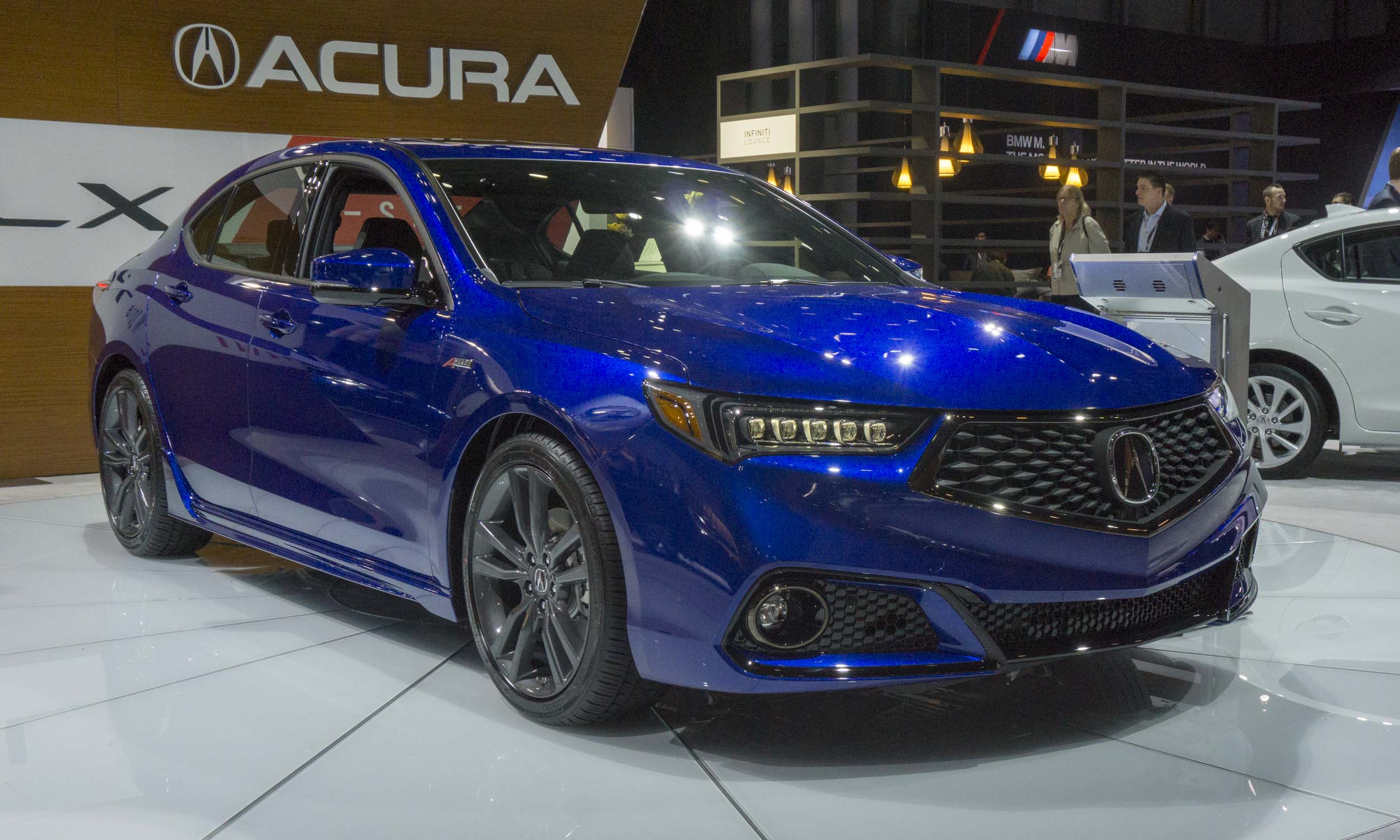 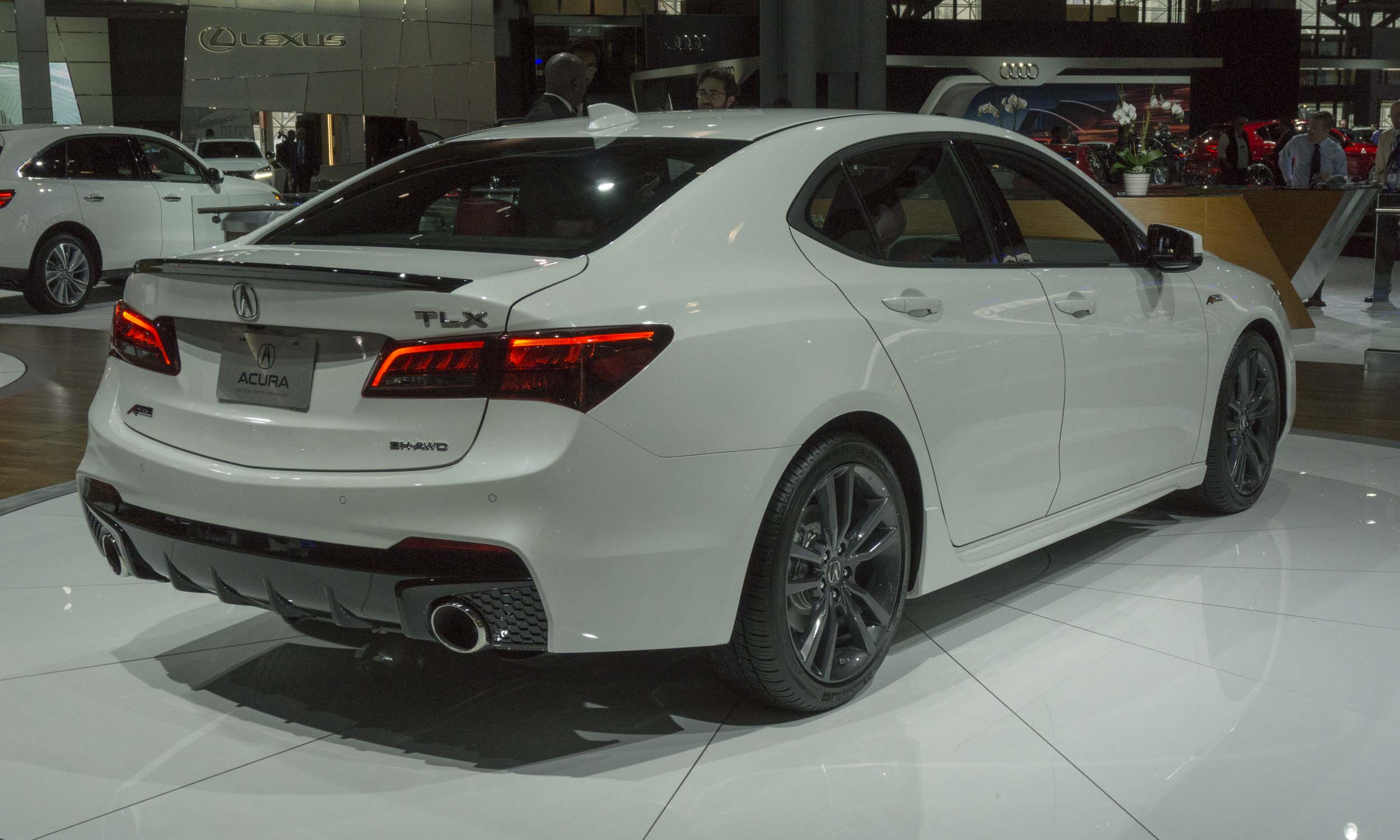 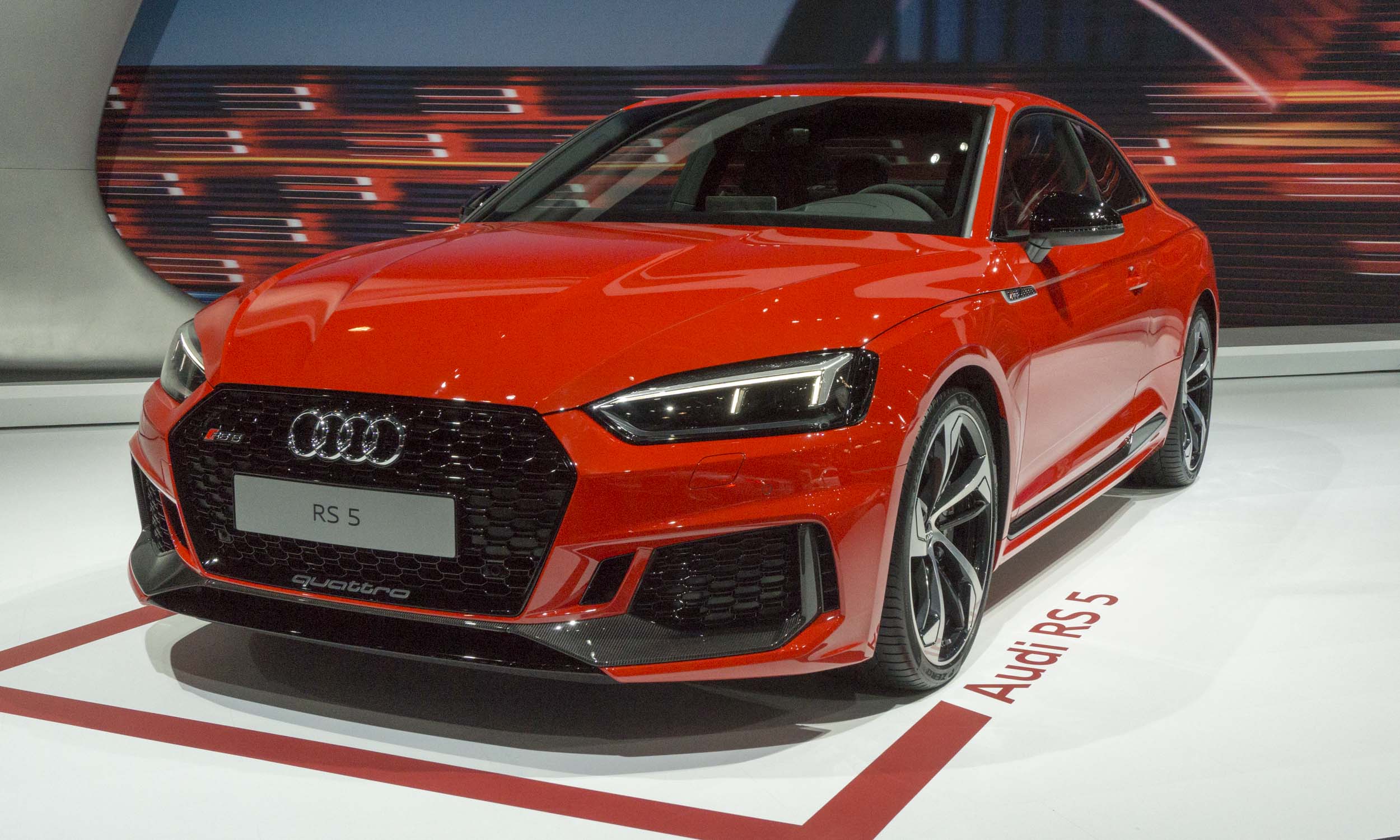 Audi RS 5
New York saw the U.S. debut of the new Audi RS 5 which was first shown at the Geneva Motor Show in March, the first car to display Audi’s new design direction for the high-performance RS models. The most powerful and top performing version of Audi’s A5 coupe, the RS 5 receives an all-new 2.9-liter TFSI biturbo V6 engine that produces 450 horsepower and 443 lb-ft of torque. Power is directed through a sport-tuned 8-speed tiptronic transmission and permanent quattro all-wheel drive. 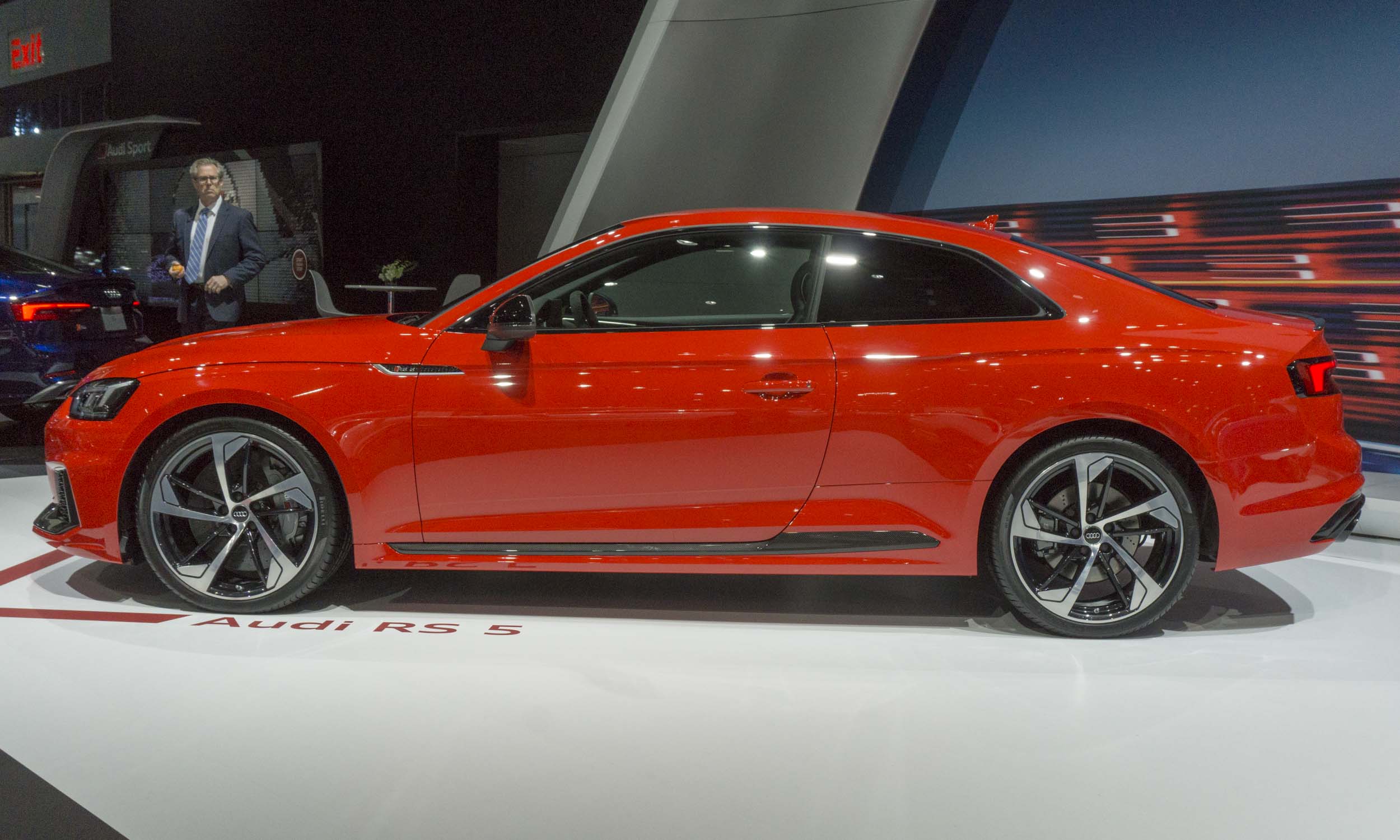 Audi RS 5
Audi designers drew inspiration for the RS 5 from the Audi 90 quattro IMSA GTO that raced in the late ‘80s and early ‘90s, incorporating elements such as the large air inlets with black honeycomb material. The Singleframe grille is wider and flatter than the A5 and additional air inlets are added next to the headlights. At the back is the rear diffuser which is specific to RS 5, along with large oval exhaust tips and a rear spoiler. Standard wheels are 19-inch with 20-inch available as an option. Inside are RS sport seats with available diamond stitching, flat-bottom sport steering wheel and special RS displays for the Audi virtual cockpit. The RS design package adds red as a contracting interior color and Sonoma Green Metallic exterior paint color is exclusive to RS 5. 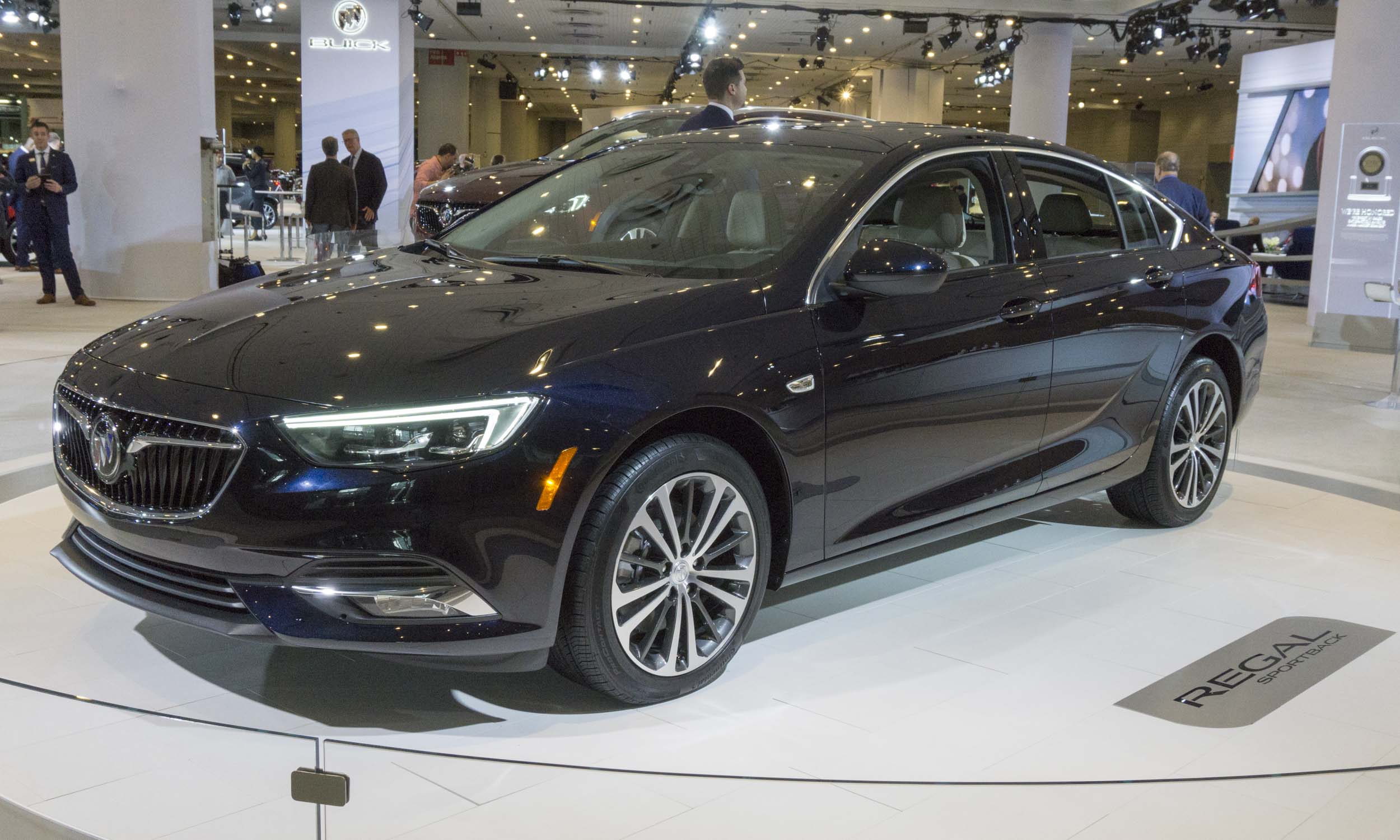 Buick Regal Sportback
Buick is expanding the Regal model line with the addition of the Regal Sportback, a sleek new 5-door with an elegant design, sleek profile and the added versatility of a hatchback. With the second-row seat in place, the Regal Sportback offers 31.5 cubic feet of cargo space, more than twice as much as the 2017 Regal, and increases to 60.7 cubic feet when the rear seat is folded. A 60/40 split-folding second-row seat is standard with a 40/20/40 rear seat also available. Power comes from a 2.0-liter turbocharged 4-cylinder that produces 250 horsepower and 260 lb-ft of torque combined with a 9-speed automatic transmission for the front-wheel drive version. When all-wheel drive is added, torque increases to 295 lb-ft delivered through an 8-speed automatic transmission. Buick’s new all-wheel-drive system uses two clutches at the rear wheels for torque distribution. 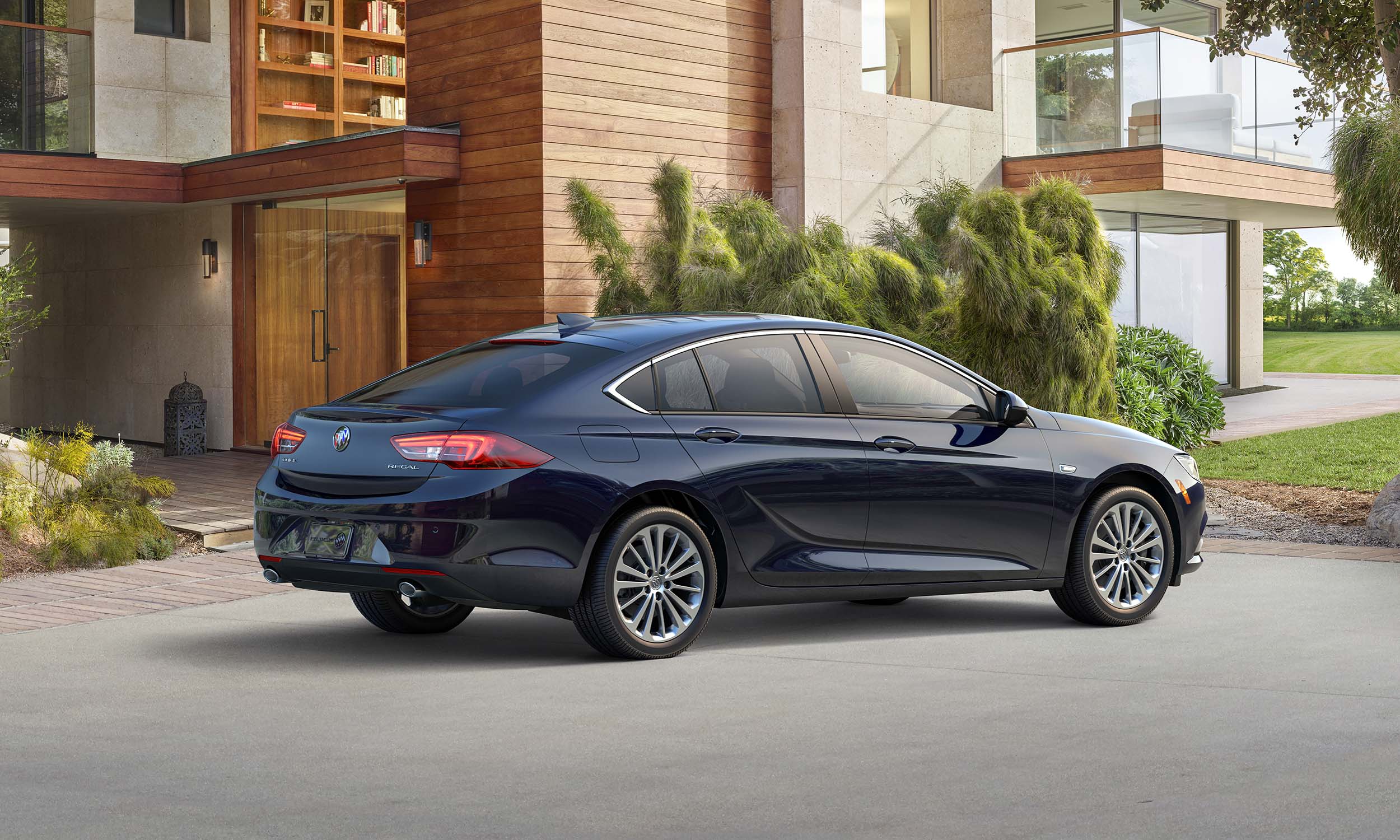 Buick Regal Sportback
Safety innovations include a Buick-first active hood pedestrian safety system, Front Pedestrian Braking and Lane Keep Assist. The standard active hood pedestrian safety system senses the imminent impact of a pedestrian between 16-30 mph and uses a pyrotechnic actuator to lift the back of the hood up about 4 inches to lessen the impact and potentially reduce injury. Buick QuietTuning includes all-new tire insulation to help reduce road noise on front-wheel-drive models and premium five-link rear suspension on AWD models. The 2018 Regal Sportback is scheduled to go on sale in the fourth quarter of 2017. 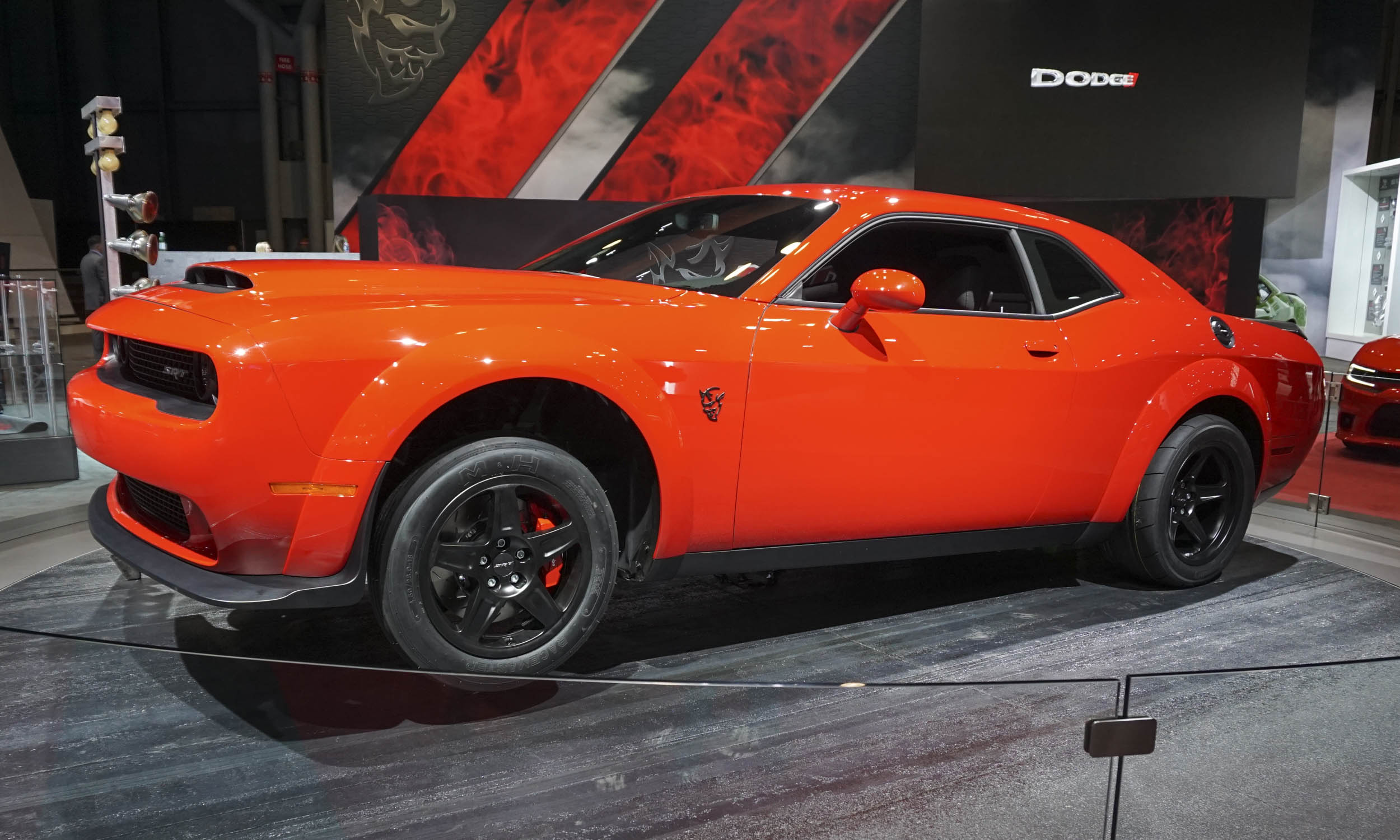 Dodge Challenger SRT Demon
Dodge stole the show with the introduction of the limited-edition Challenger SRT Demon, powered by a supercharged 6.2-liter HEMI Demon V8 engine that produces 840 horsepower and 770 lb-ft or torque, the highest horsepower V8 engine ever offered in a production car. The Dodge Challenger SRT Demon is also the fastest production car ever — certified in the quarter-mile by the National Hot Rod Association with an incredibly quick elapsed time of 9.65 seconds with a trap speed of 140 miles per hour. The Demon’s powerplant is based on the same architecture as the 707-horsepower HEMI Hellcat engine, although more than 50 percent of the components have been upgraded, including a high-speed valvetrain, strengthened connecting rods, stronger pistons and an improved lubrication system. This supercharged 6.2-liter V8 also gets extensive modifications such as a larger supercharger, increased boost pressure to 14.5 psi, SRT Power Chiller liquid-to-air intercooler system, two dual-stage fuel pumps, and a larger induction air box. 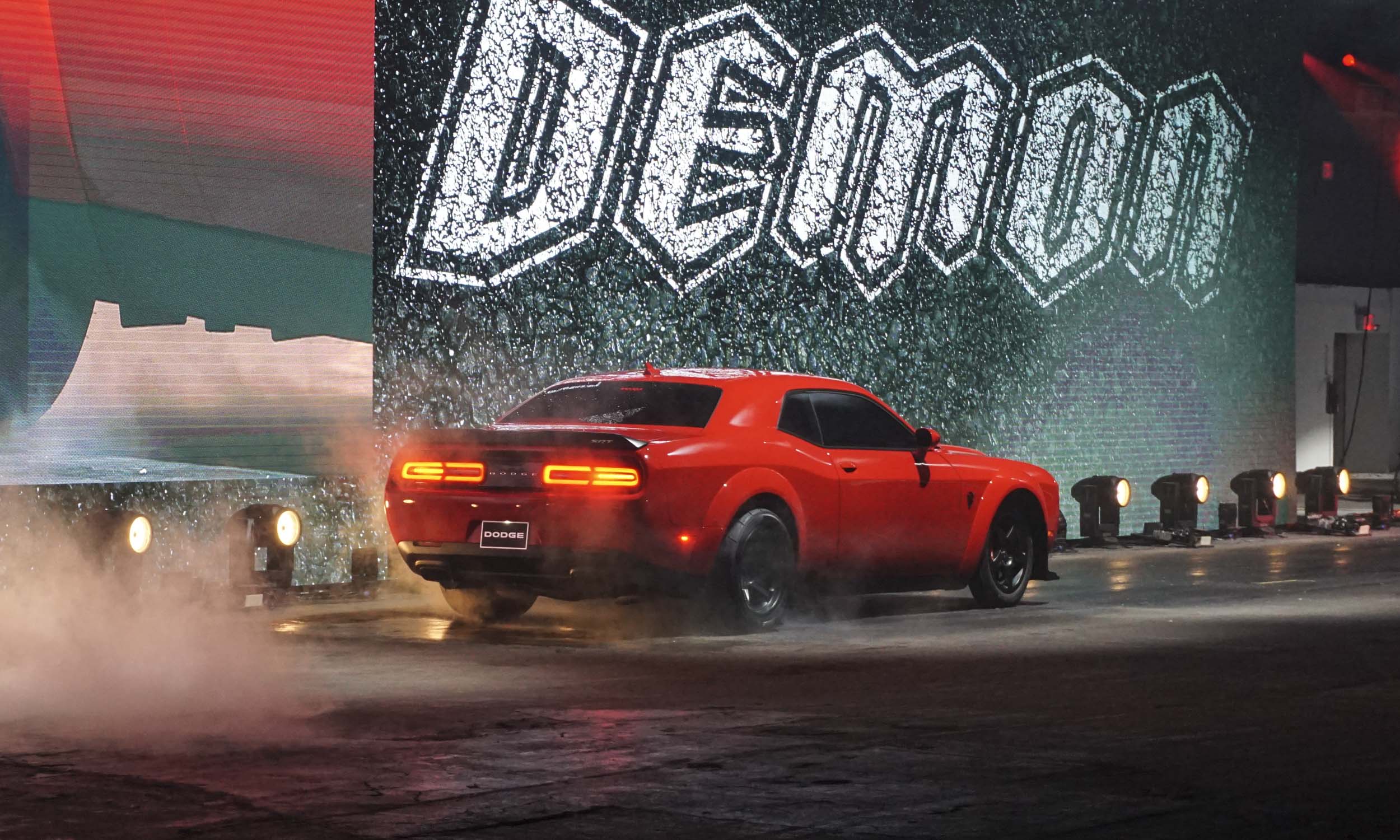 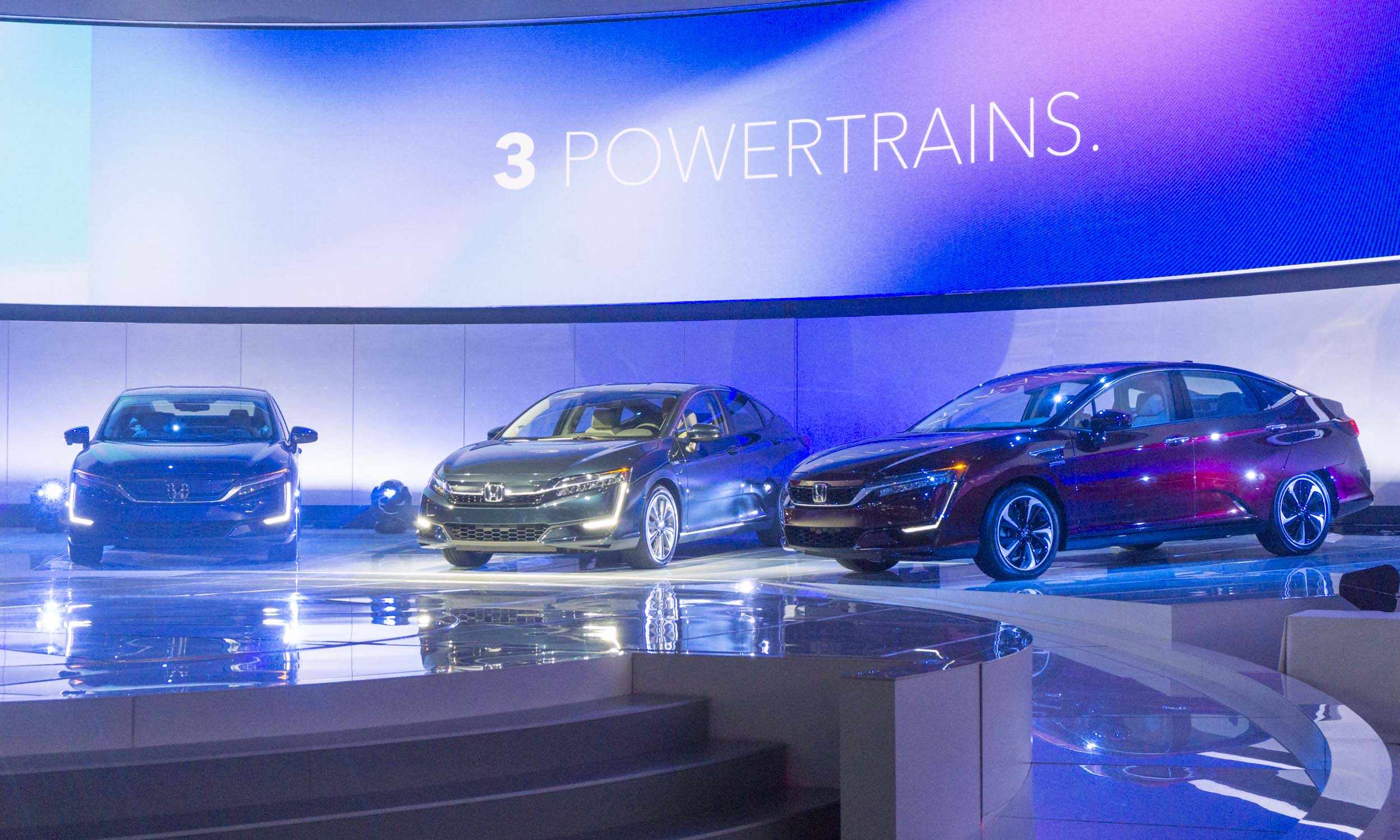 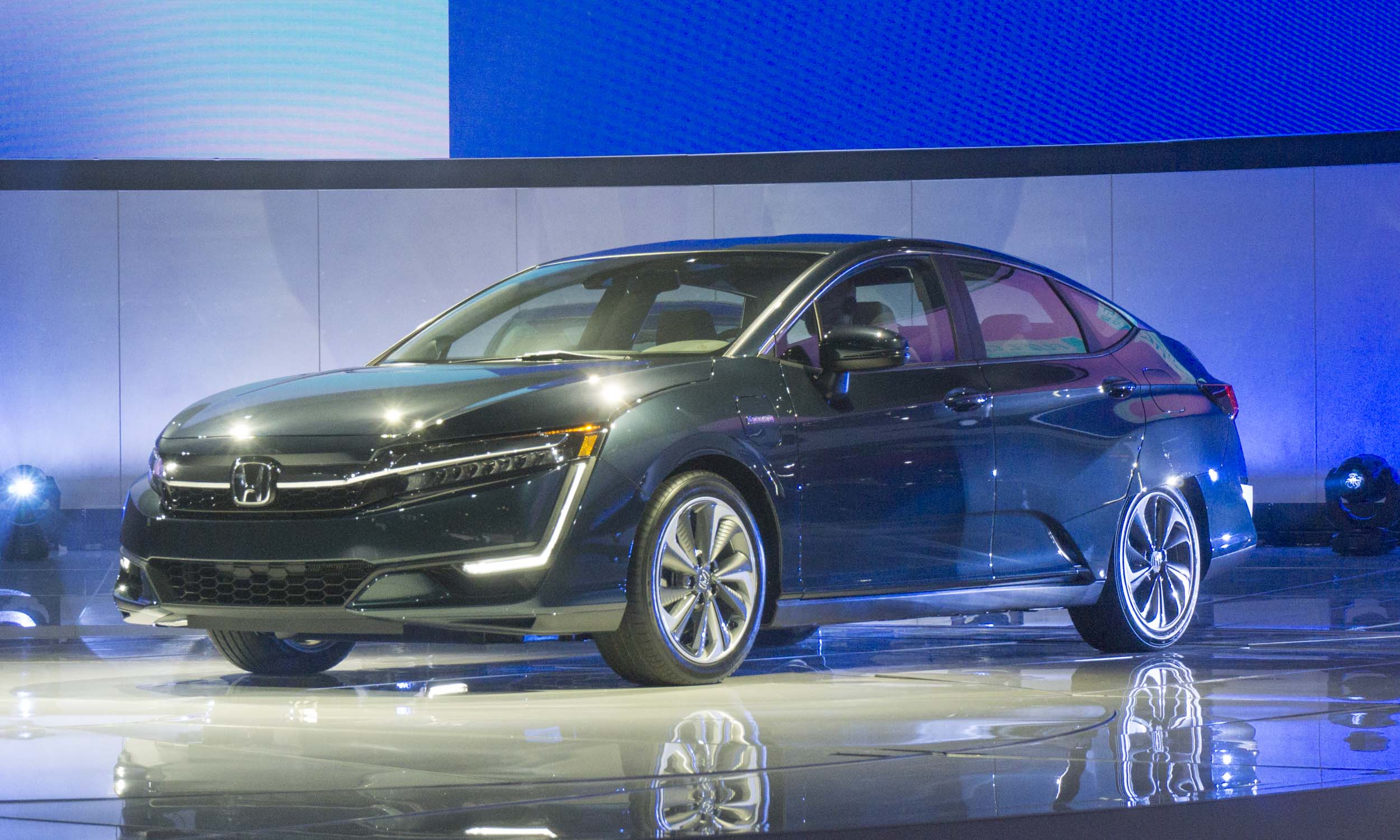 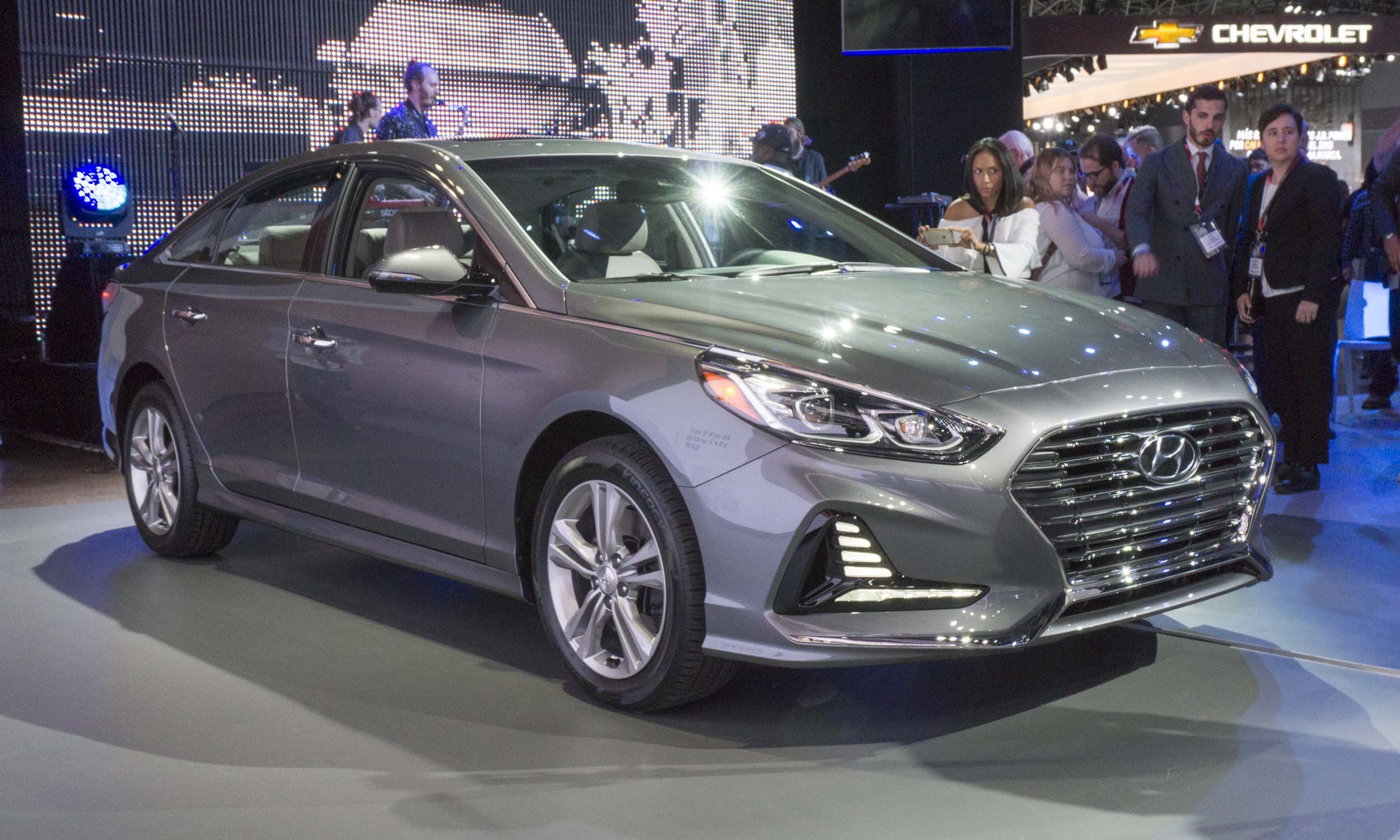 Hyundai Sonata
Hyundai’s midsize sedan is redesigned for the 2018 model year with a bold new front end that features a new “Cascading Grille” that will become a signature look for future Hyundai models. The hood slopes further down to meet the low, wide grille flanked by vertical LED daytime running lights. The front fenders and narrow headlights with optional LED lights taper forward to the grille. At the rear, the license plate has been moved lower and a Sonata logo has been added to the center of the trunk lid with narrow taillights and the overall shape that mimics the front-end design. Sonata Sport and 2.0T trims add a mesh grille, unique front and rear fascias and gloss black window trim. 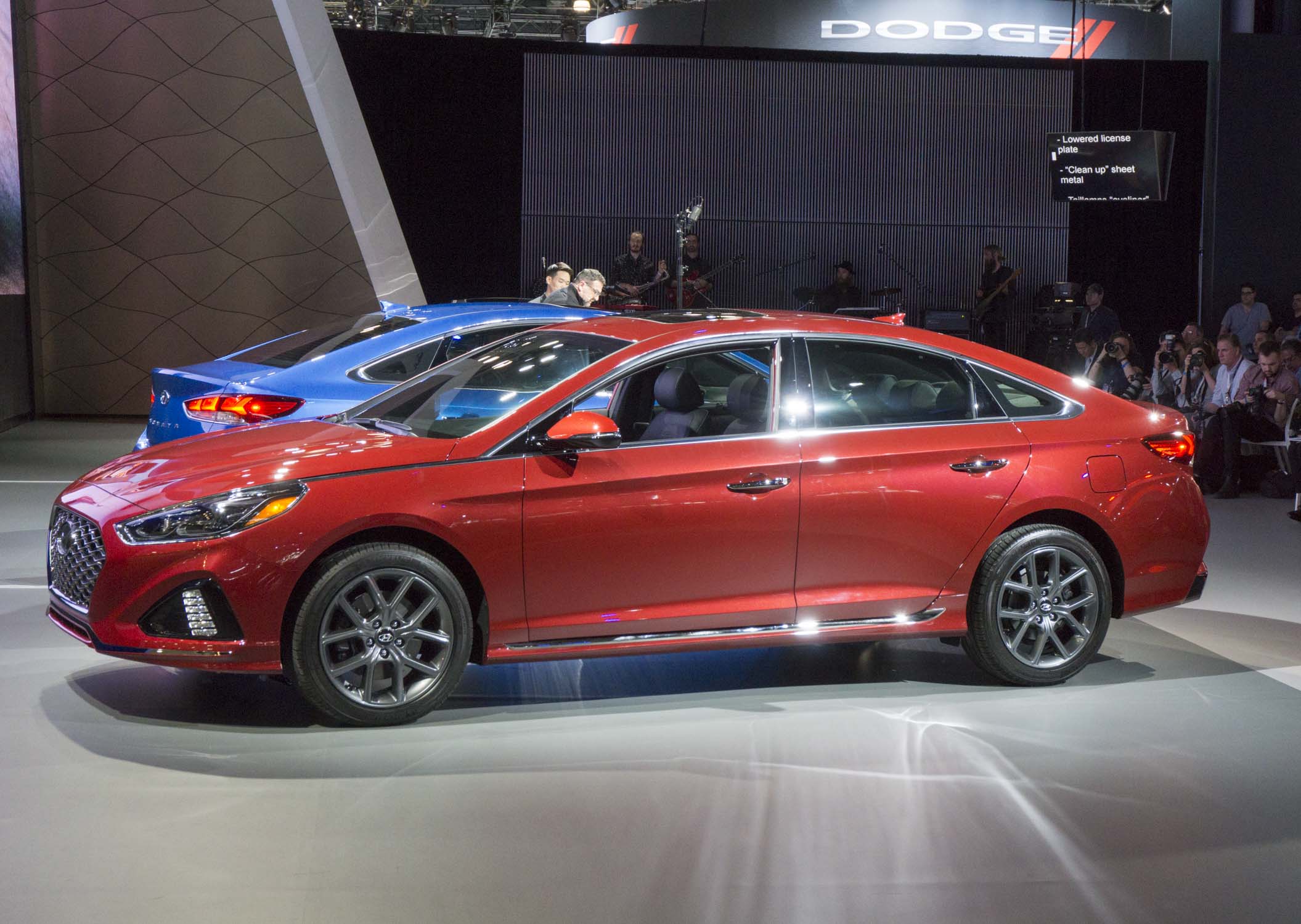 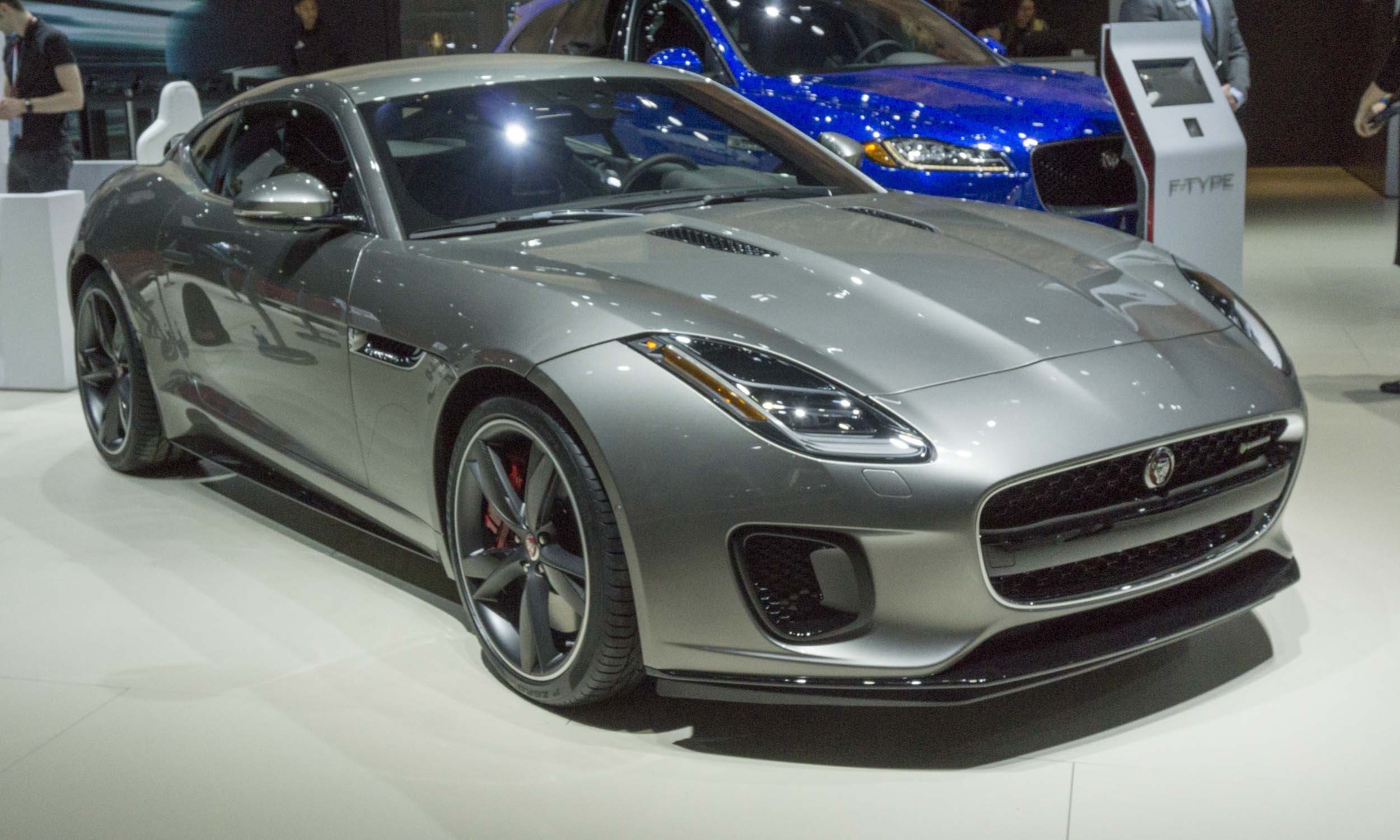 Jaguar F-Type
The 2018 Jaguar F-Type debuted at the New York Auto Show with a new look, new powertrain options and new standard technology. For the first time, the F-Type will be offered with a 4-cylinder engine – a 296-horsepower turbocharged 2.0-liter teamed with the 8-speed Quickshift transmission. Peak torque is produced as low as 1,500 rpm, helping the 4-cylinder F-type reach 60 mph in 5.4 seconds. Top track speed is 155 mph. The F-Type continues to be available with supercharged V6 and V8 engine options, including the 575-horsepower F-Type SVR. 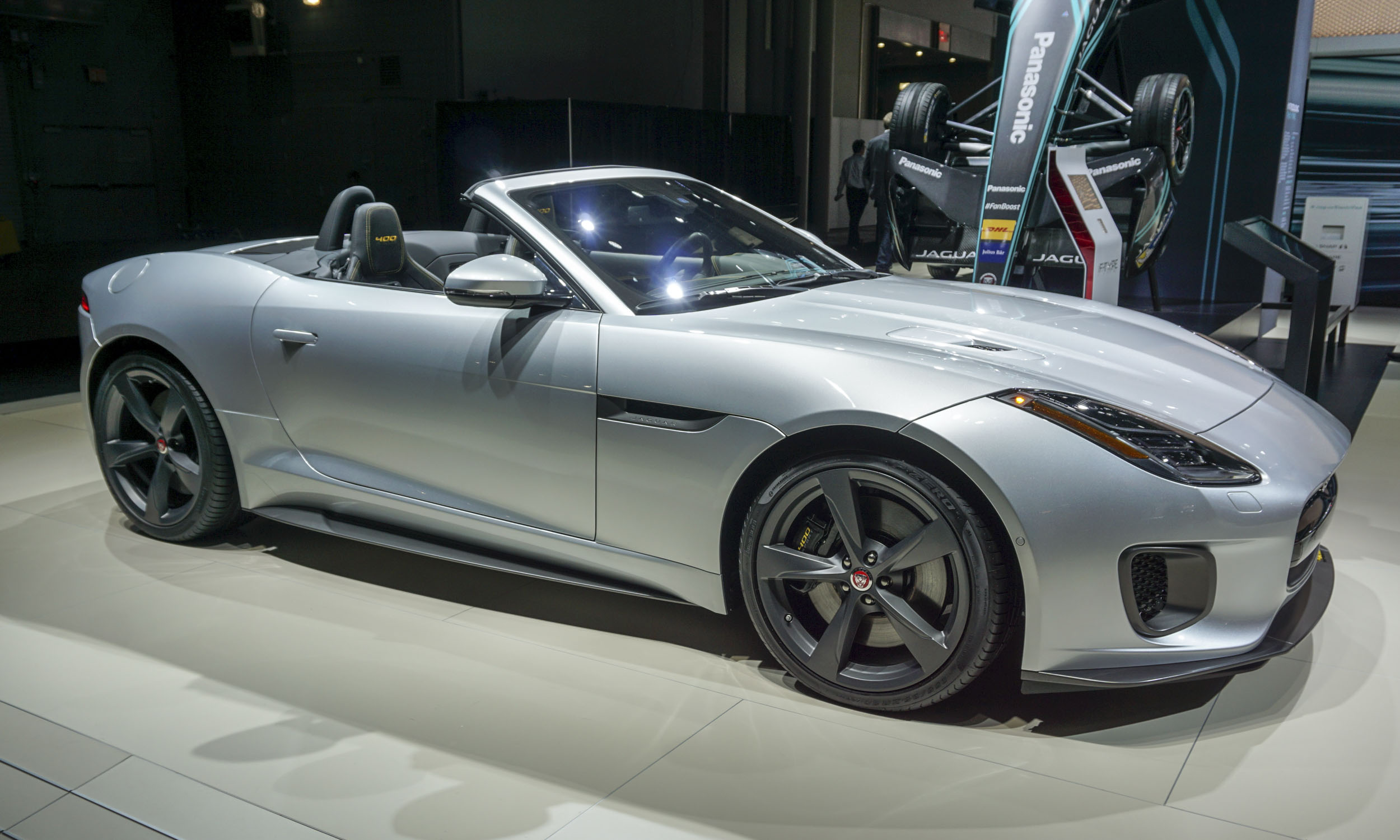 Jaguar F-Type
Design updates for 2018 include new full-LED headlights, a new front bumper and new air intakes. New lightweight slimline seats offer improved ergonomics and comfort but also provide a weight savings of more than 17 pounds. The ReRun App developed with GoPro creates video content with real-time on-board telemetry integration. Standard on all F-Types is the Jaguar InControl Touch Pro infotainment with fast responses, tablet-style pinch-to-zoom and swipe operation, navigation functions such as Share ETA and online services such as real-time traffic and live weather reports. A new F-Type 400 SPORT special edition is offered only for the 2018 model year powered by a 400-horsepower version of the supercharged 3.0-liter V6 with suspension updates and special 20-inch wheels. 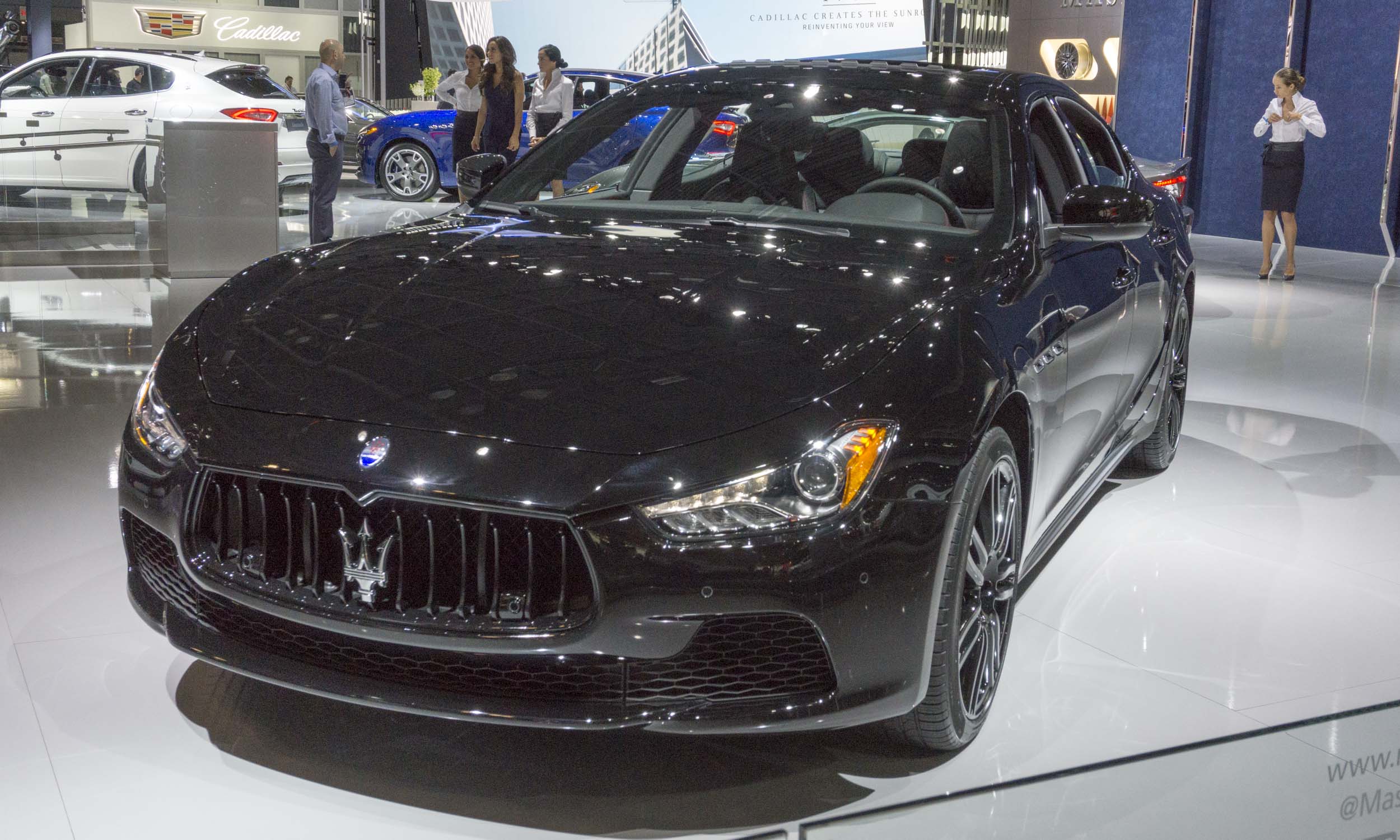 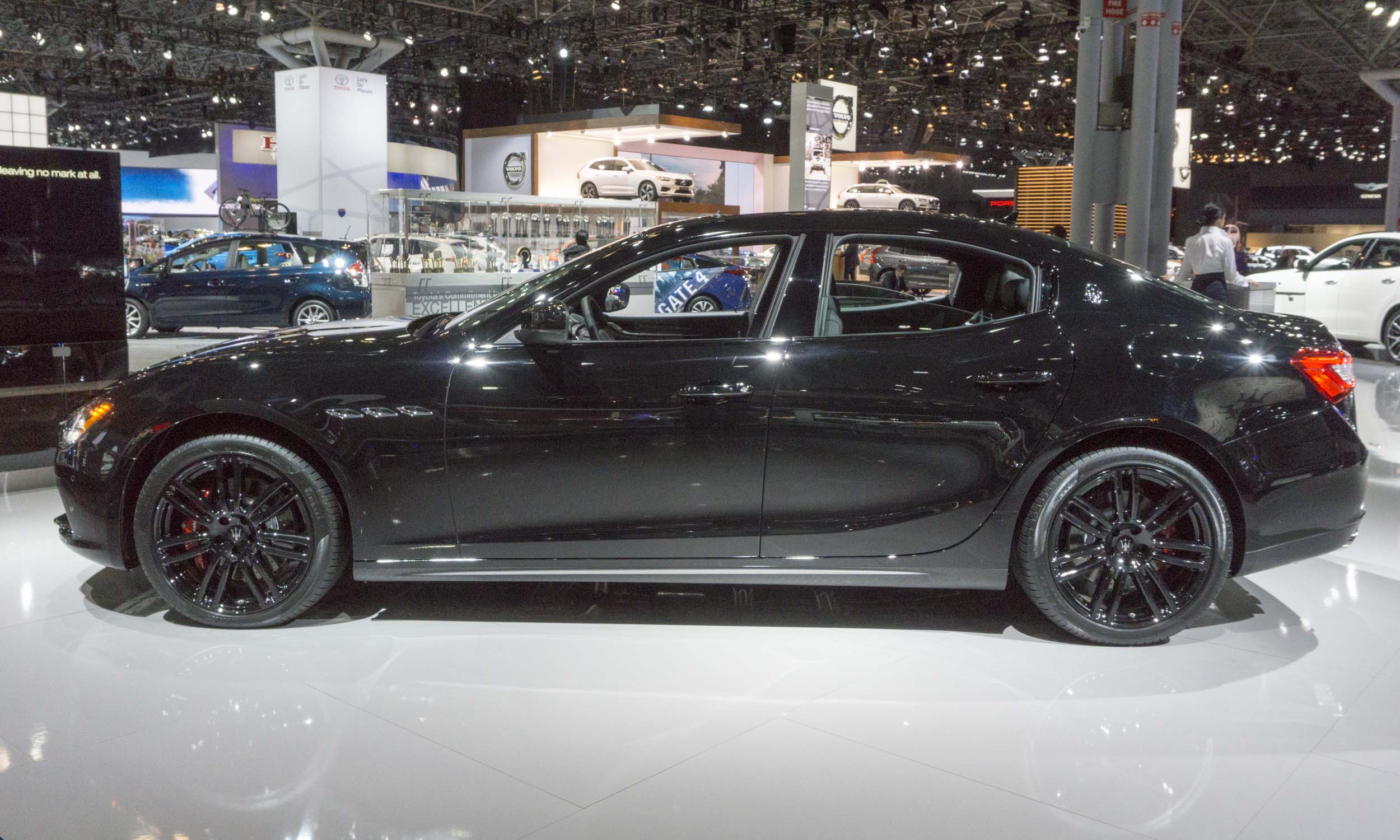 Maserati Ghibli Nerissimo
In addition to the black exterior paint, the Maserati Ghibli Nerissimo features Glossy Black 20-inch Urano wheels, black door handles, black trim and a black grille. Ghibli Nerissimo is well equipped with the Sport Package, Premium Package, Extended Leather interior in black with red stitching, gear shift paddles, Dark Mirror interior trim, Sport Seats and a Sport Steering Wheel. Each Ghibli Nerissimo with include a plaque on the center console with the production number out of 450. The Maserati Ghibli is powered by the Ferrari built twin turbocharged 3.0-liter V6 engine with an 8-speed ZF automatic transmission. The Ghibli SQ4 Nerissimo on display in New York had 404 horsepower and was equipped with Maserati Q4 intelligent all-wheel drive, making it capable to accelerates from zero to 60 mph in 4.7 seconds and reach a top track speed of 176 mph. 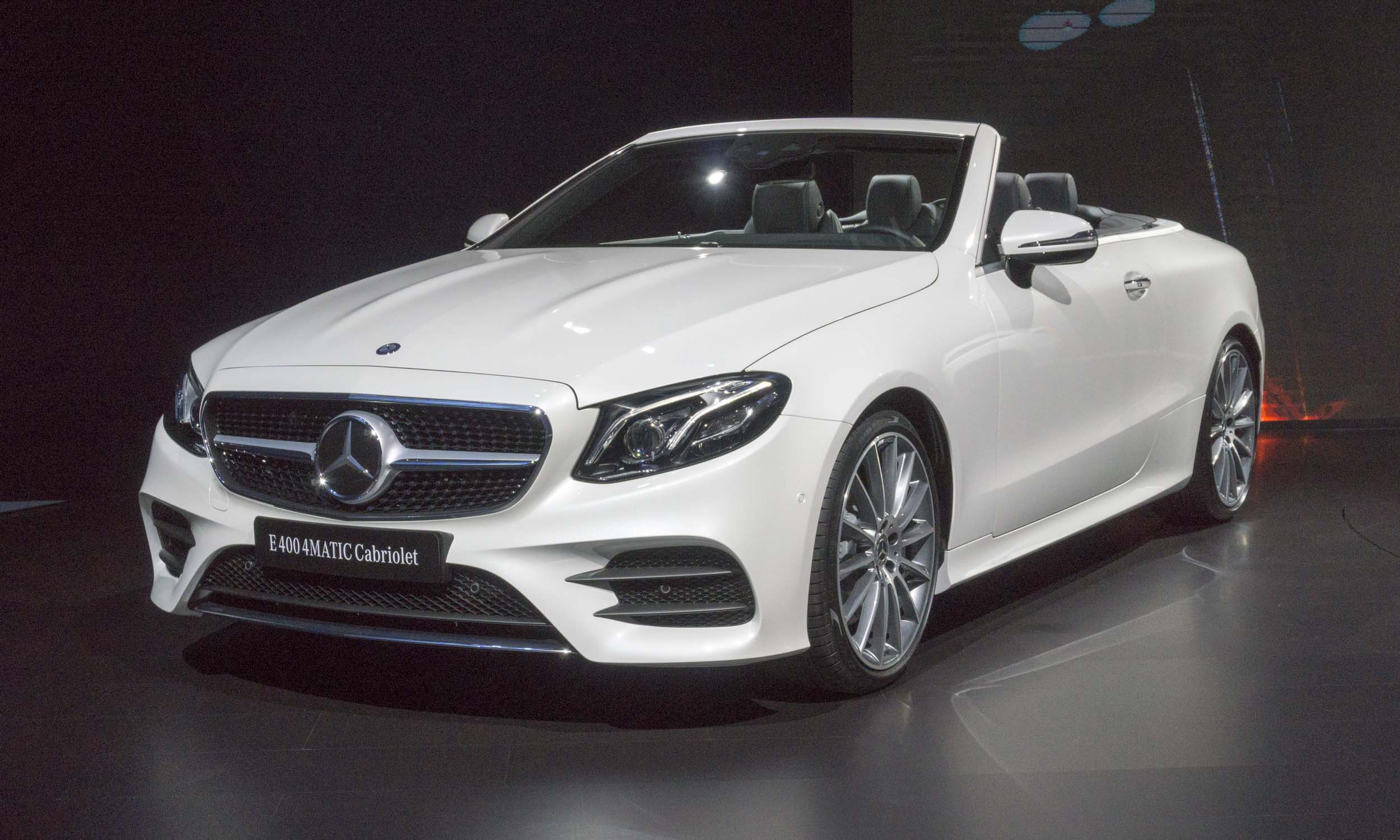 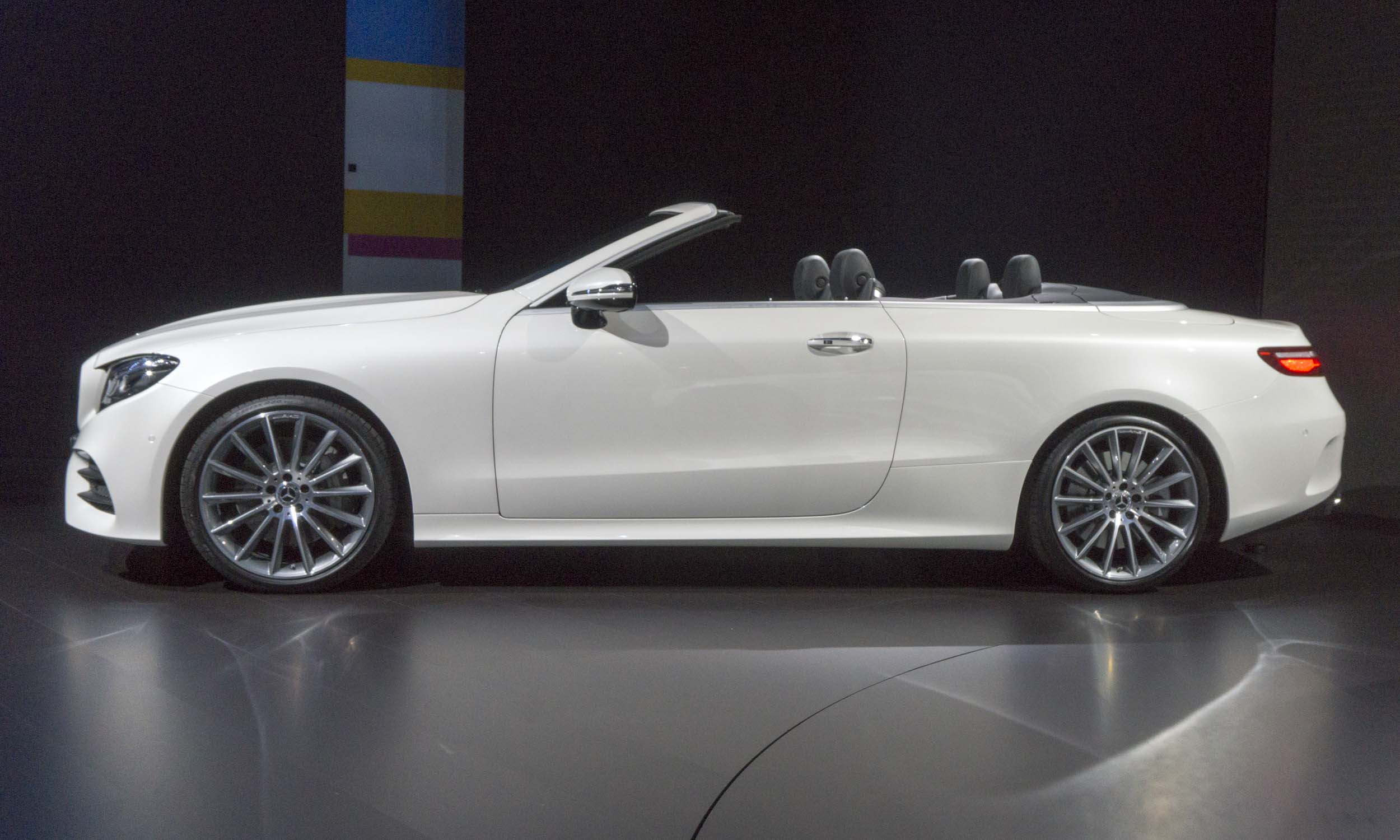 Mercedes-Benz E-Class Cabriolet
The new E-Class Cabriolet will be offered with a powerful but efficient 3.0-liter biturbo V6 engine and for the first time the convertible will be available with 4Matic all-wheel drive. The top on the E-Class Cab can be raised or lowered in 20 seconds at speeds up to 30 mph and with the top raised, the cabriolet has a similar silhouette to the E-Class Coupe. The E-Class also features the signature Mercedes-Benz Airscarf, which circulates warm air near the neck when ambient temperatures are low and AIRCAP wind deflector. The E-Class Cabriolet is expected to go on sale before the end of the year. 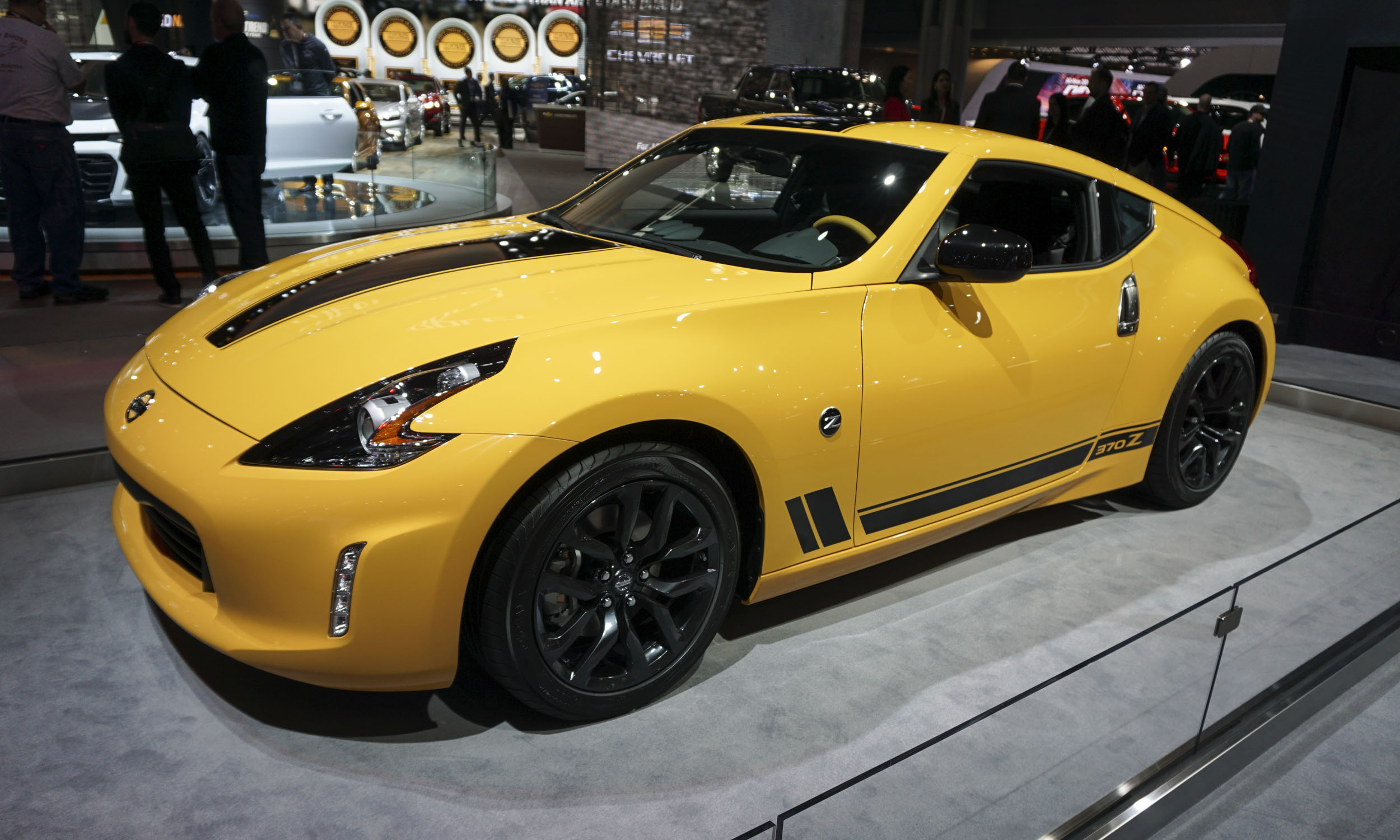 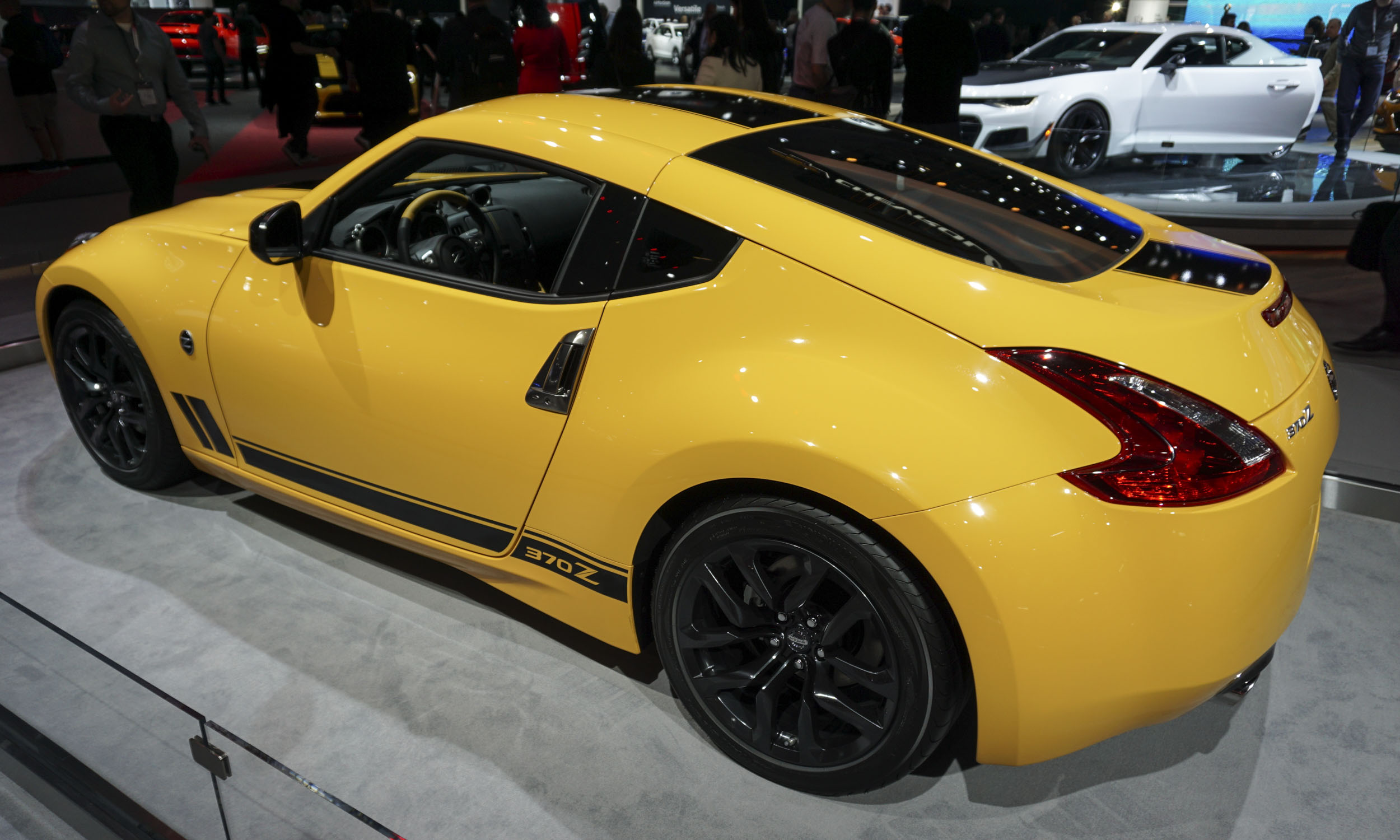 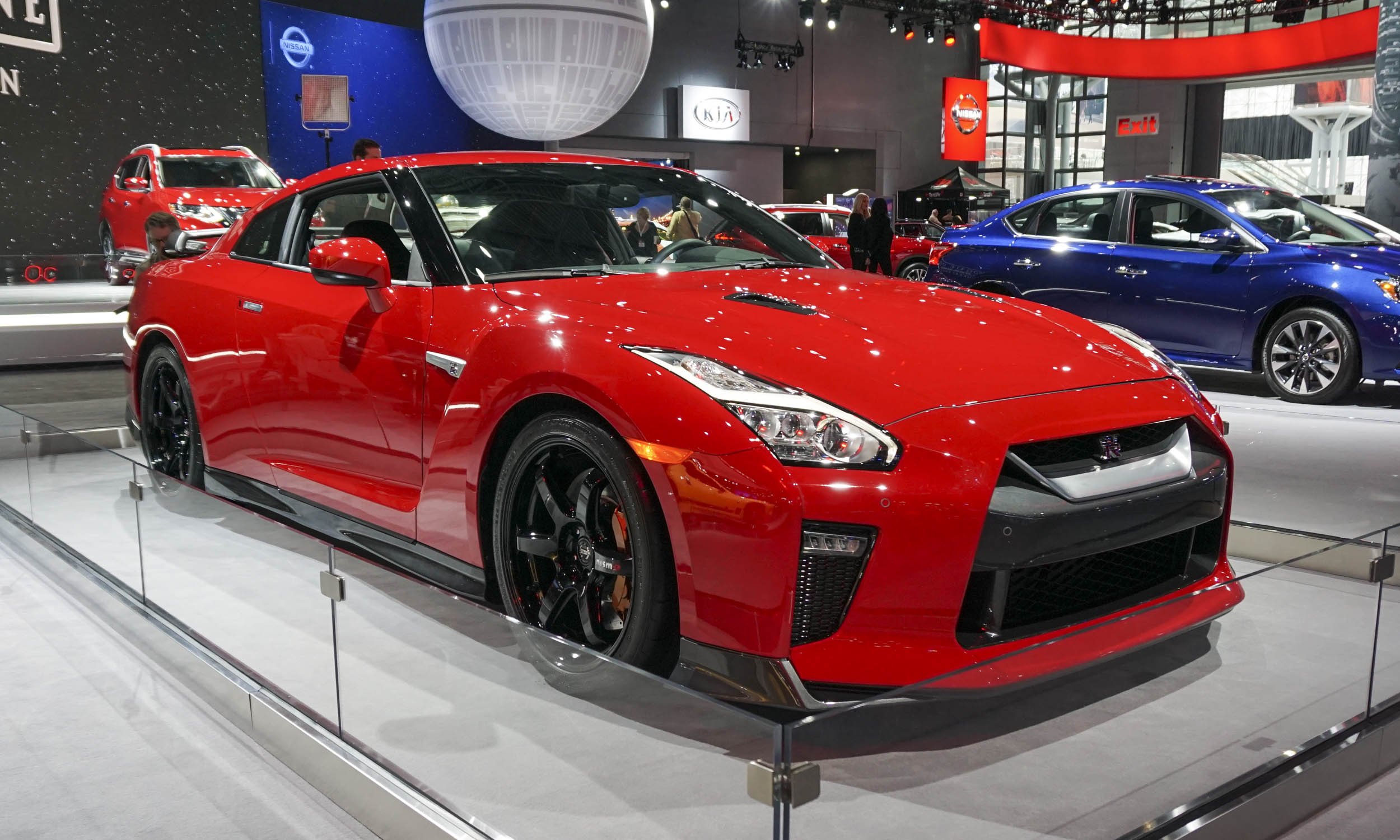 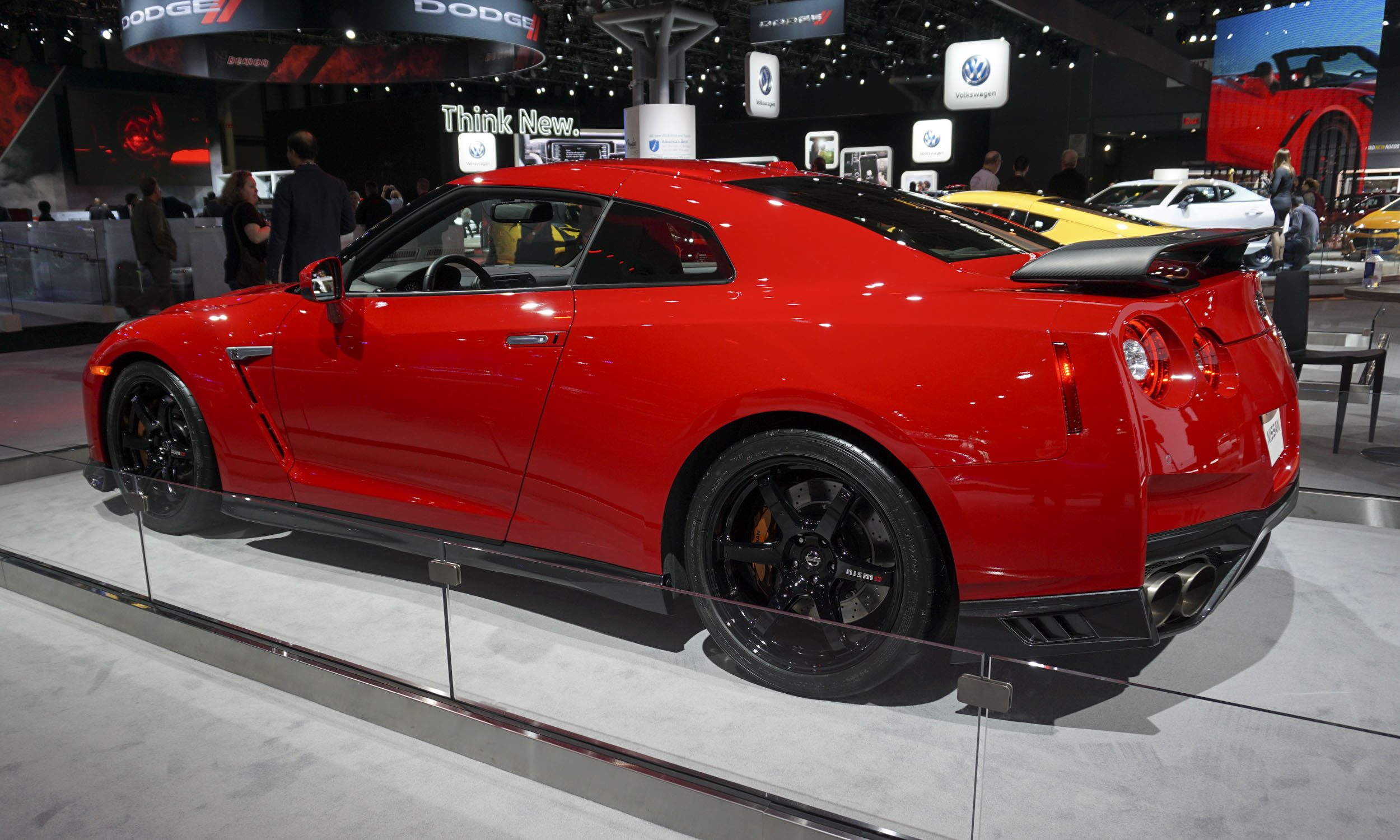 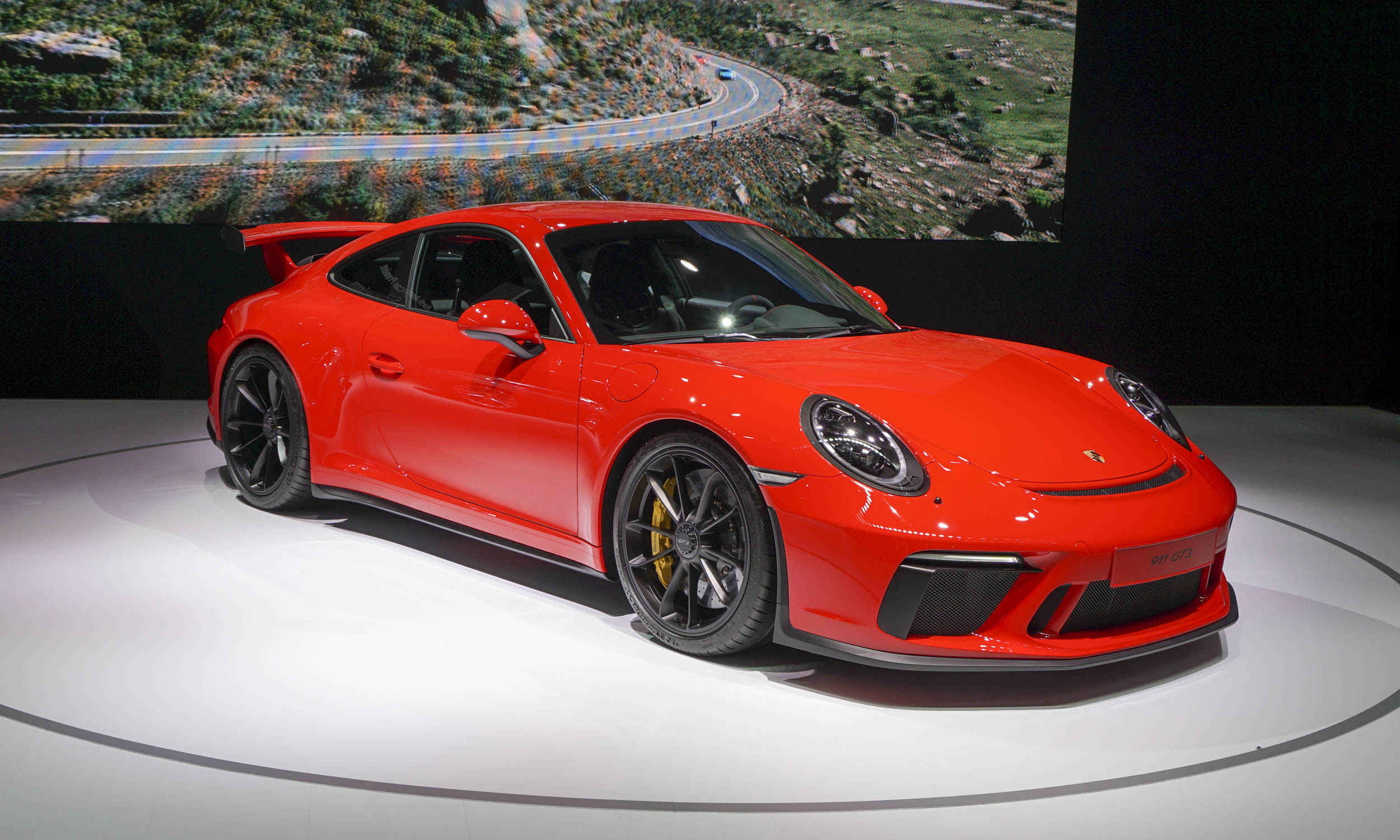 Porsche 911 GT3
The latest version of the 911 GT3 was on display in New York after making its world debut in Geneva last month. With more power, more speed and higher precision, Porsche believes they have “created a new ruler of the racetrack,” but this one can be driven on the road to the track as well. The new GT3 is powered by a 4.0-liter engine producing 500 horsepower — practically the same engine used in the 911 GT3 Cup Car. 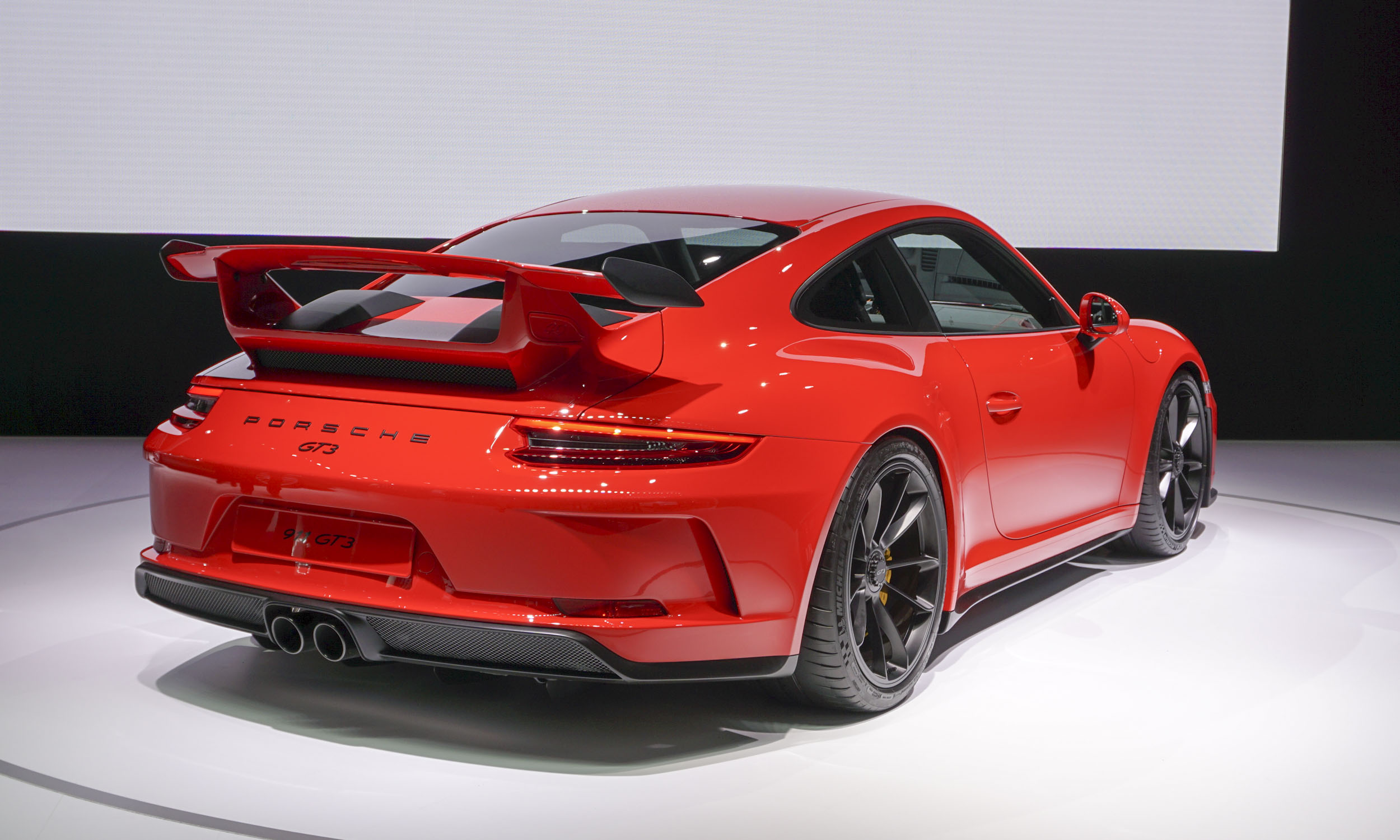 Porsche 911 GT3
Driving enthusiasts will be pleased to hear that the GT3 can be equipped with a 6-speed manual gearbox, as well as Porsche’s quick-shifting PDK transmission. Acceleration to 62 mph (100 km/h) takes a mere 3.4 seconds with the PDK, and top speed is just a tick under 200 mph. The GT3 will certainly get noticed on road or track with its large rear wing and large air intakes up front. Look for the 911 GT3 to be available this summer. 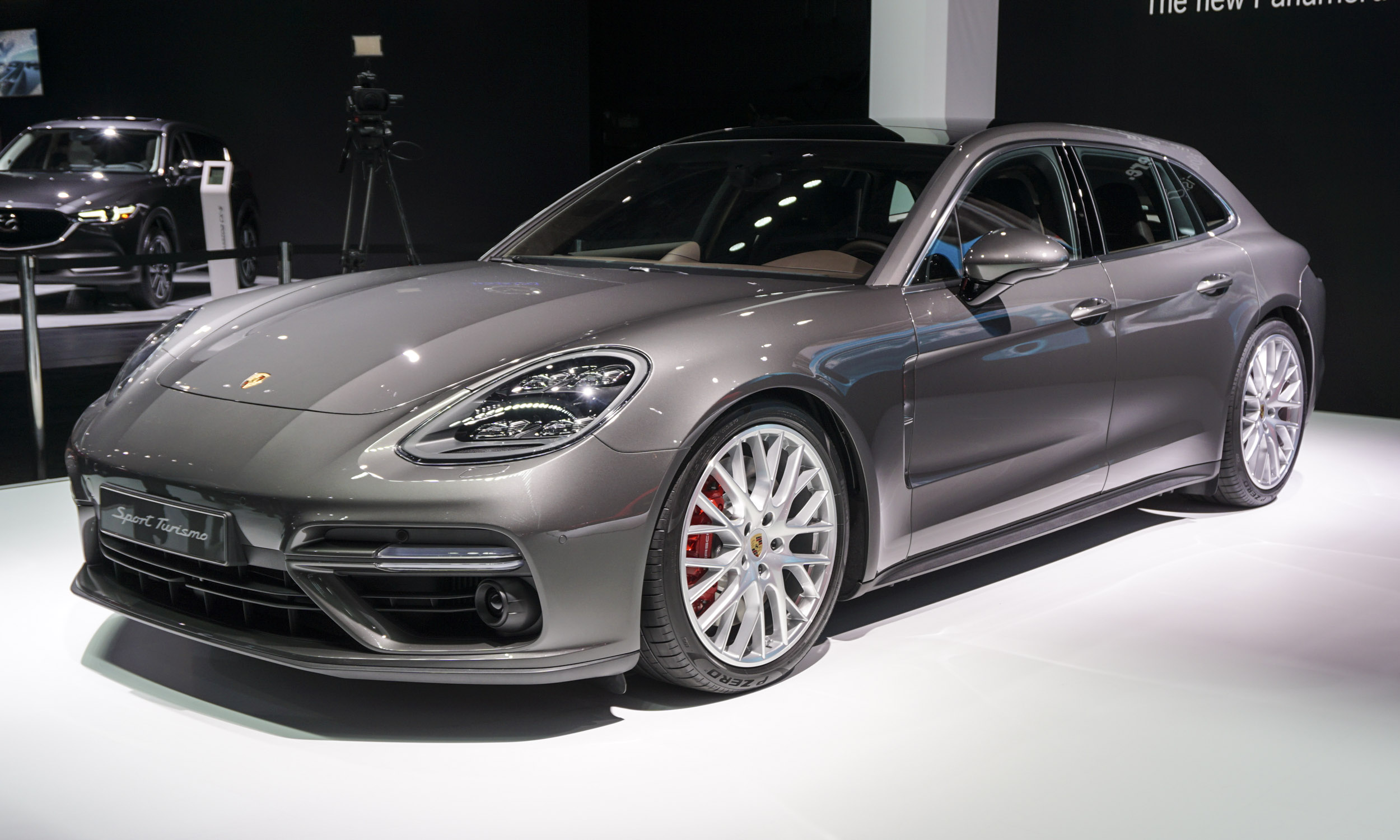 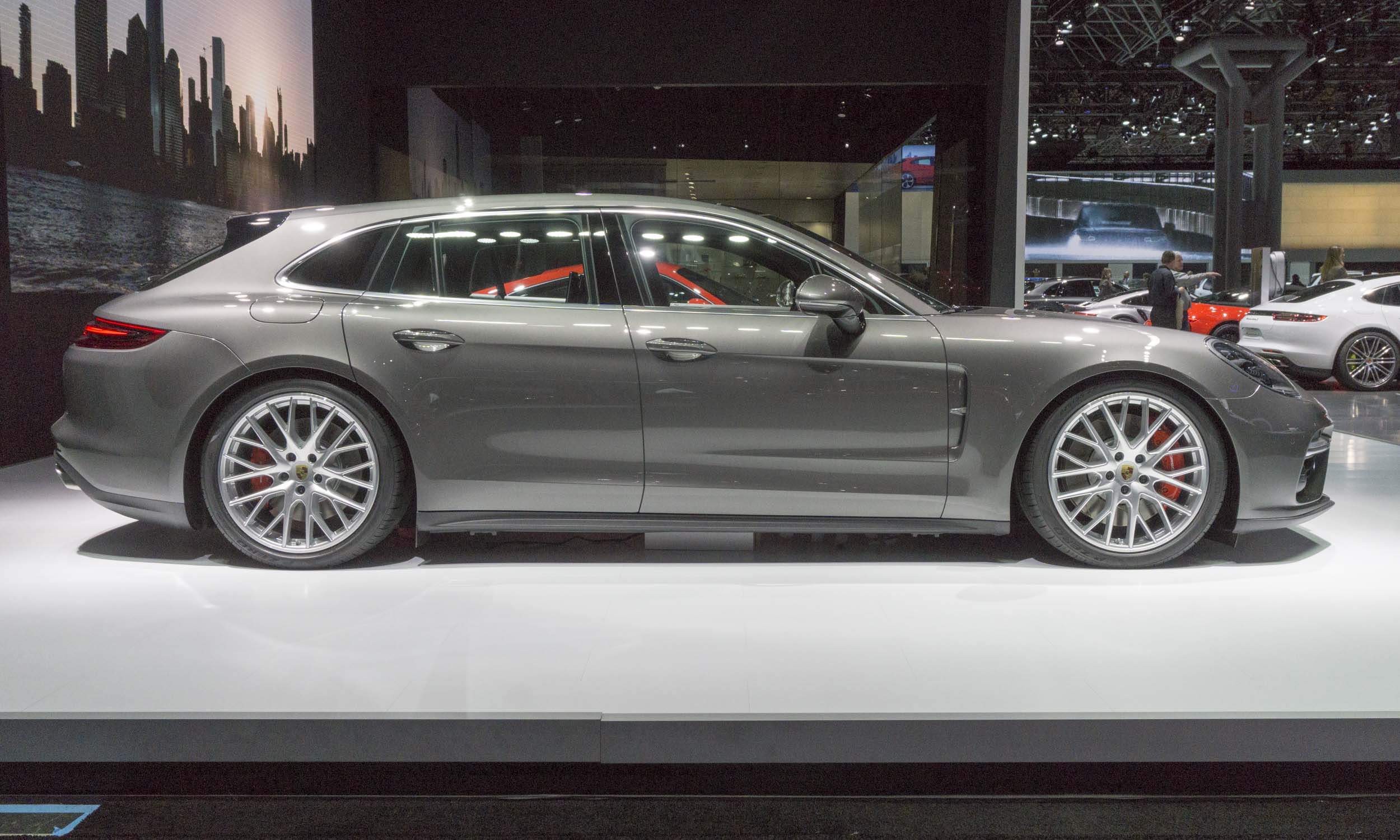