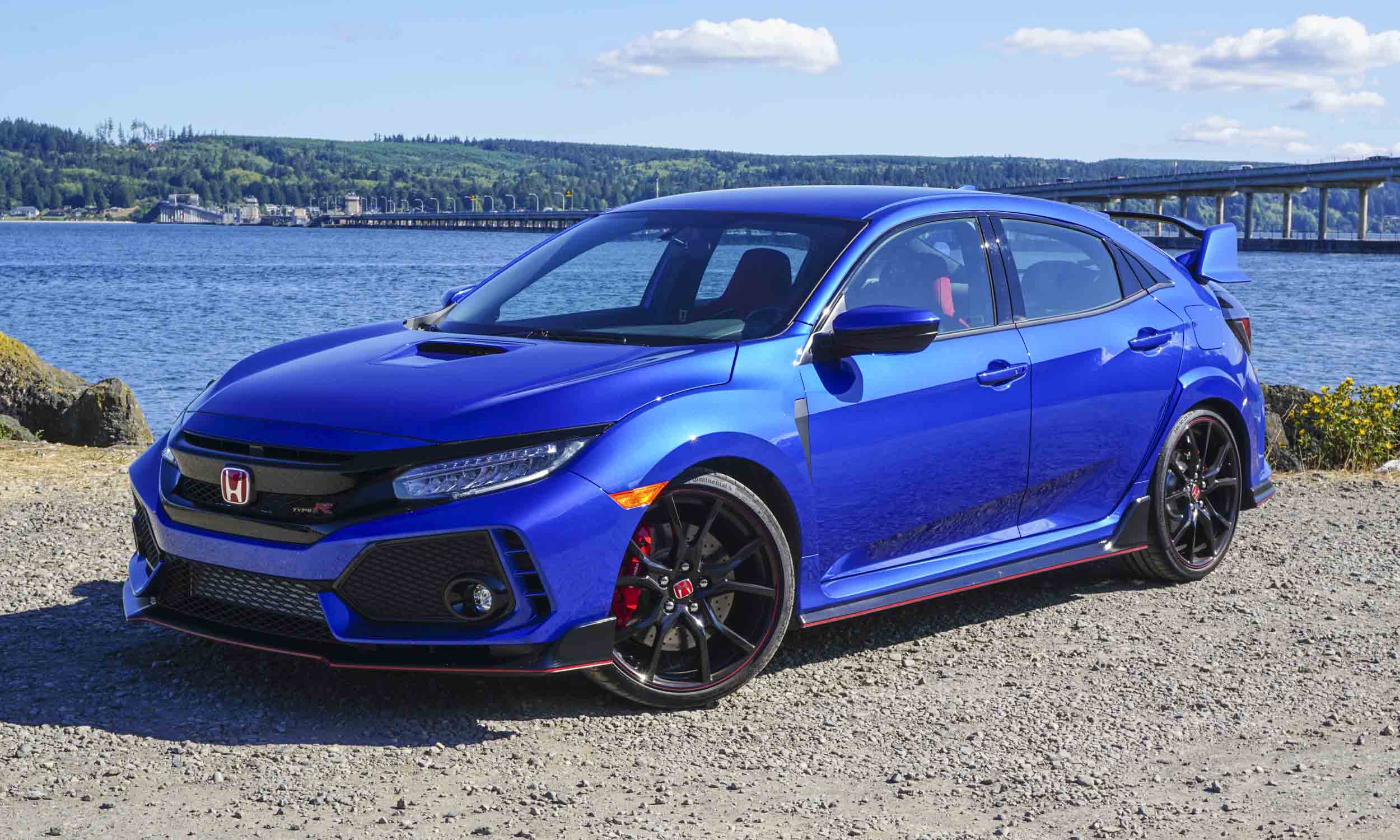 © Mike Meredith, Automotive Content Experience
Forbidden Fruit No More
Honda’s hottest Civic has been available in other markets for the past 20 years, leaving fans in America longing from afar, since the Civic Type R has never been imported to the U.S. All that changes in 2017 as the fifth addition of the Civic Type R — the fastest, most-powerful Honda to be sold in America — is finally available stateside. Honda’s extensively redesigned 10th-generation Civic is now produced on a single platform for all markets — including the U.S. version — which opened the door for the high-performance Civic Type R to finally come to America. 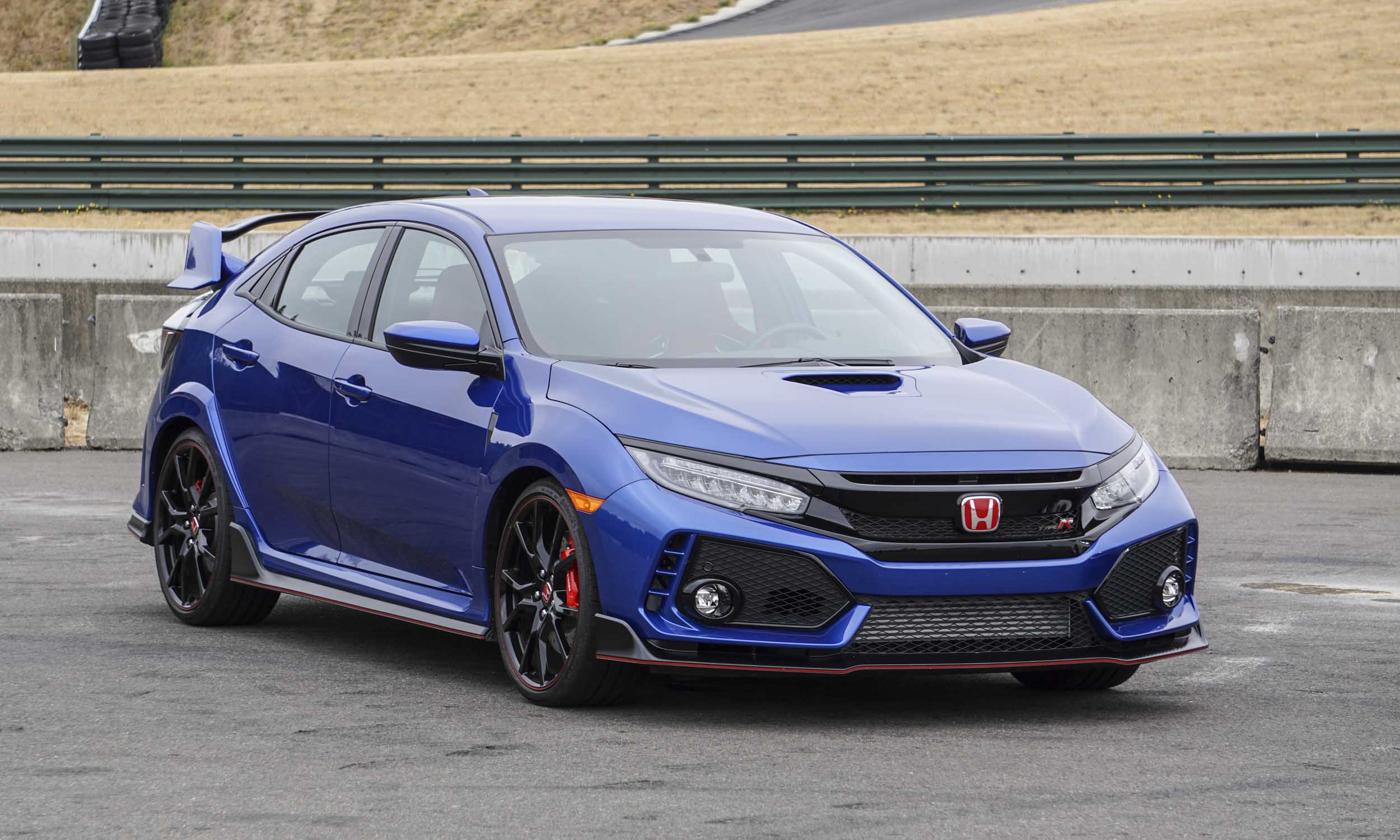 © Mike Meredith, Automotive Content Experience
Tenth Generation
The new Civic’s bold styling has been somewhat polarizing, but it definitely stands out in a crowd of conventional compact cars. The Civic Type R takes things another giant step via aerodynamic and performance updates including a bold front fascia, wider fenders, a hood scoop, a large rear wing, roof-mounted vortex generators, a wider track, a three-outlet exhaust and 20-inch wheels. Based exclusively on the Civic 5-door hatchback and built in Honda’s Swindon, UK, plant, the Type R is 1.5-inches longer and 3.1-inches wider than the standard version and uses adhesives to increase torsional stiffness without increasing weight. The rear wing reduces lift and adds downforce; the hood scoop provides engine cooling and manages airflow; and the intercooler is mounted low in front behind the grille. 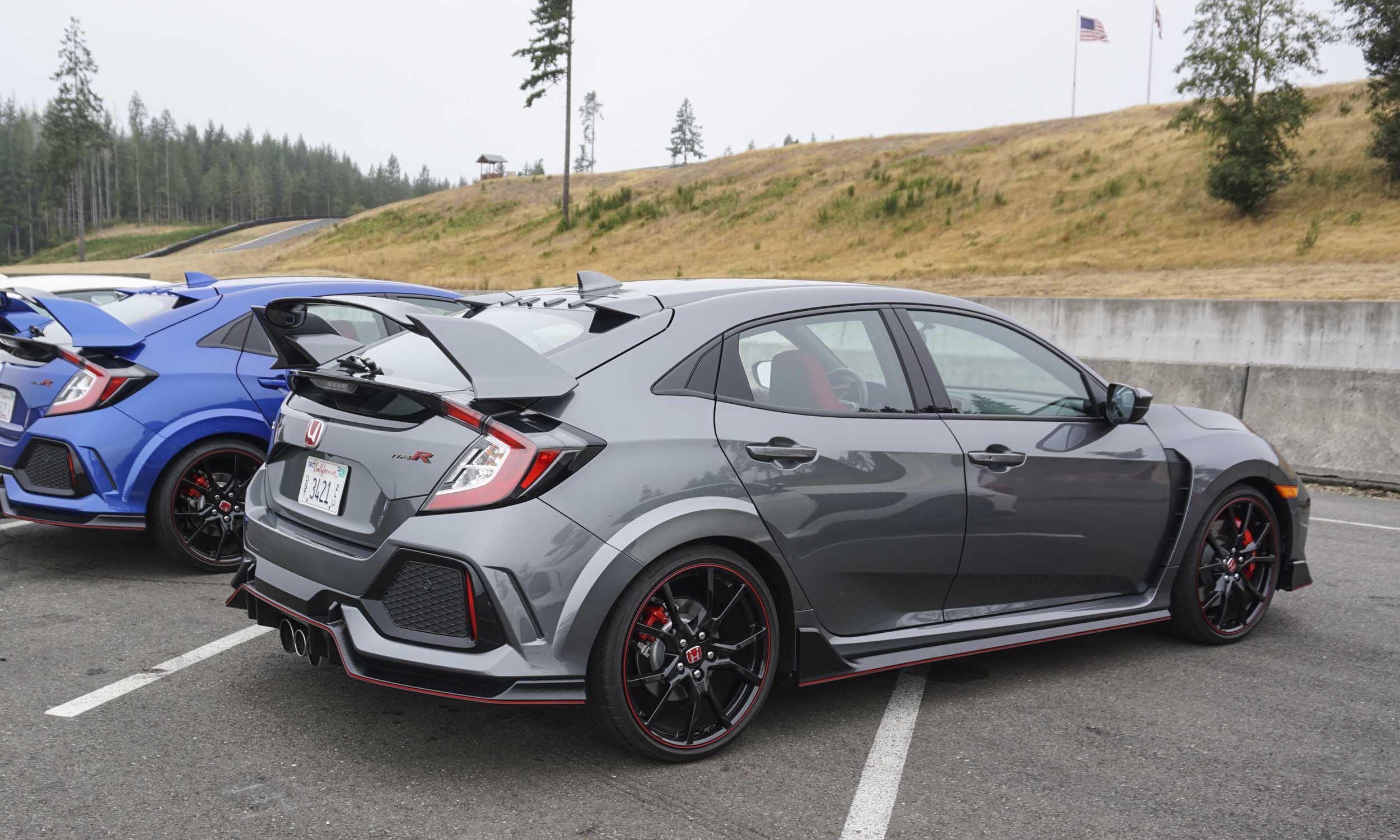 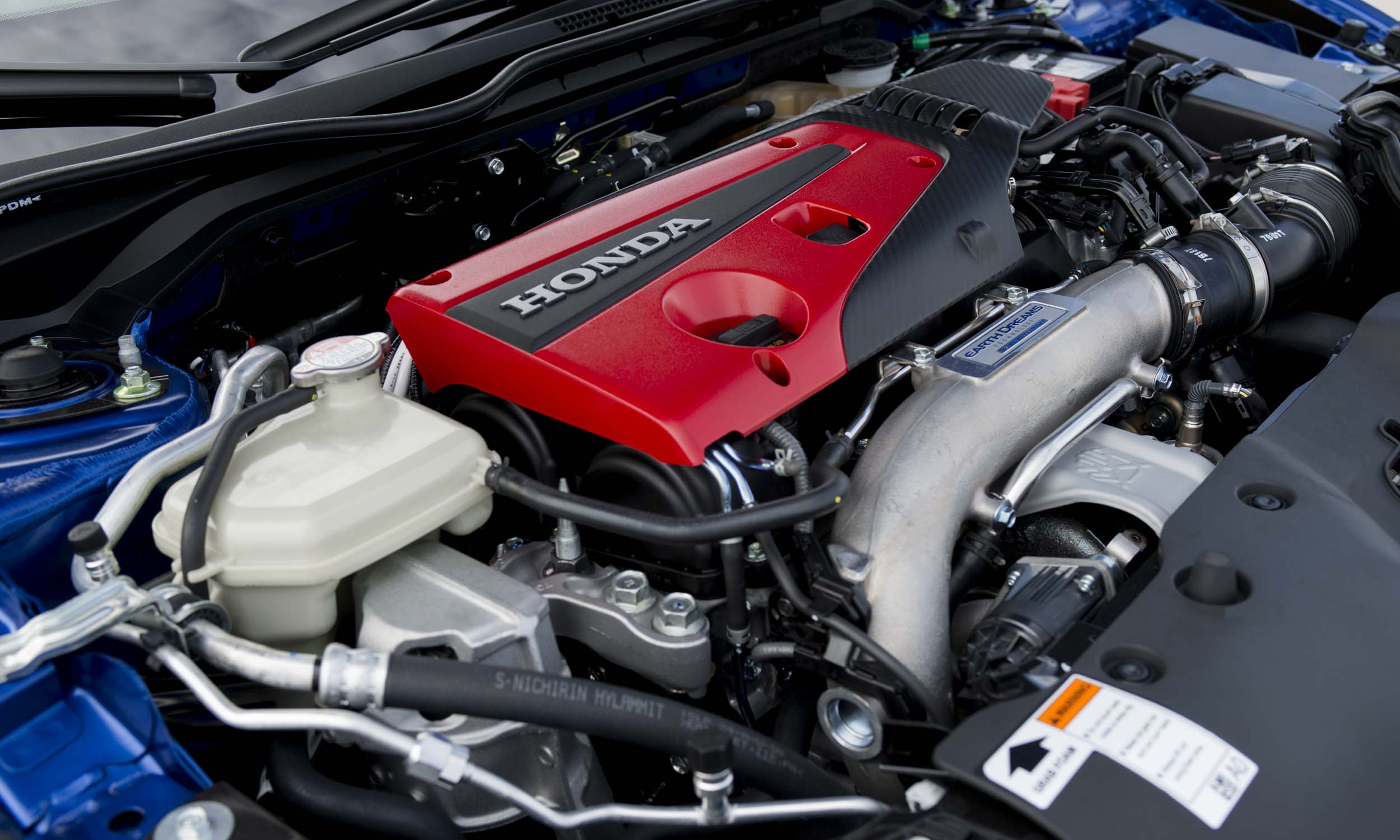 © American Honda Motor Co., Inc.
Heart of the Type R
The most powerful engine ever offered in a production Honda for the U.S. market, the Civic Type R’s i-VTEC 2.0-liter turbocharged engine produces 306 horsepower and 295 lb-ft of torque between 2500 and 4500 rpm. Built exclusively by Honda of America at the Anna, Ohio, engine plant (the same plant that creates the twin-turbo V6 engine for the mid-engine Acura NSX), the Type R’s engine features a high-flow mono-scroll turbo system with an electric wastegate to control boost pressure. The lightweight aluminum-alloy cylinder head features exhaust ports cast directly in the head to eliminate the need for a separate exhaust manifold; the exhaust ports are liquid cooled. 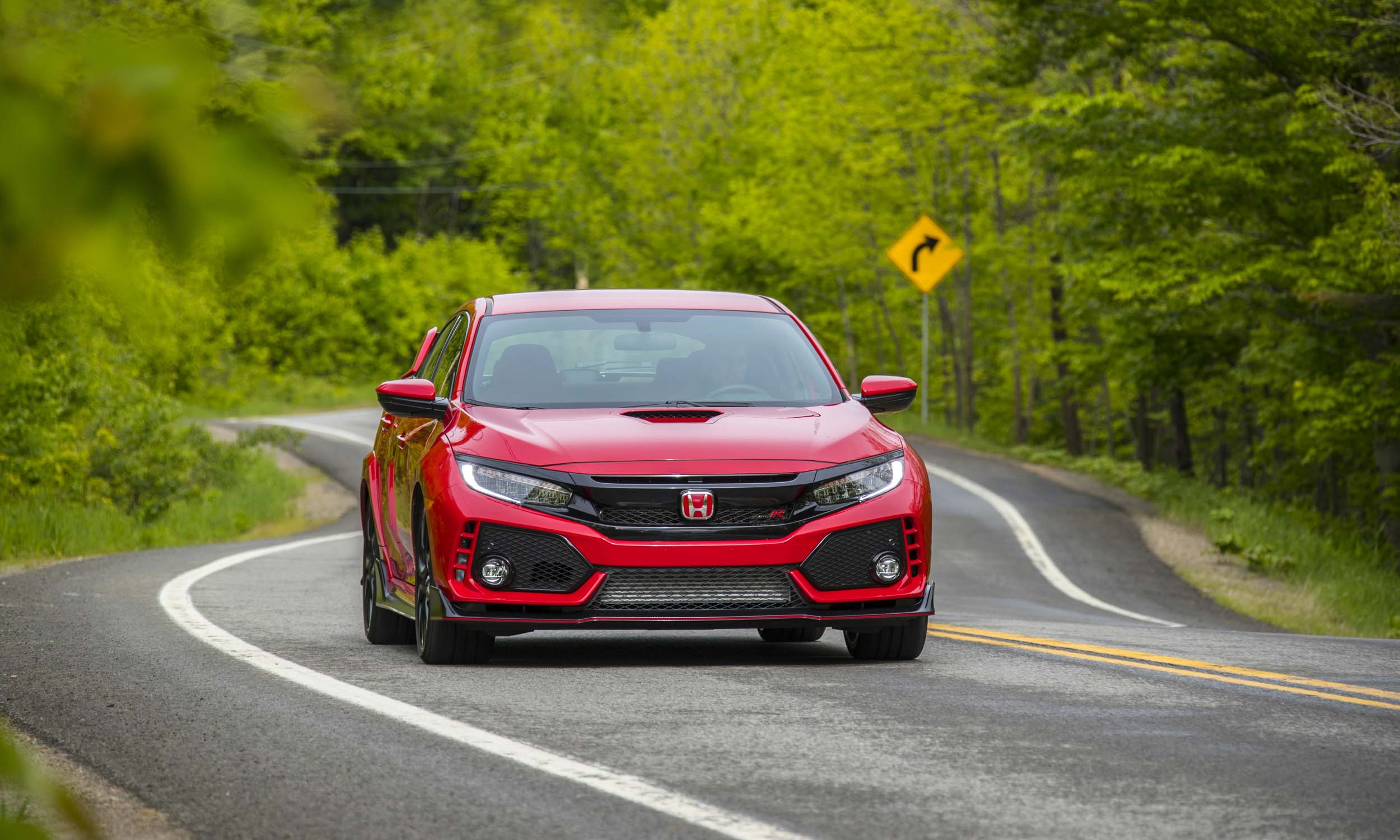 © American Honda Motor Co., Inc.
Front-Wheel Drive
The new Civic Type R continues with a front-wheel-drive platform, and in April 2017 it set a new lap record for a front-wheel-drive production car at the famous Nurburgring track in Germany: 7 minutes 43.80 seconds. Power gets delivered to the front wheels through a close-ratio 6-speed manual transmission with automatic rev matching and a mechanical helical-type limited-slip differential. Civic Type R competitors such as the Ford Focus RS, Subaru WRX STI and Volkswagen Golf R all use all-wheel drive, but Type R sticks with two-wheel drive to avoid the additional weight increase of all-wheel drive. 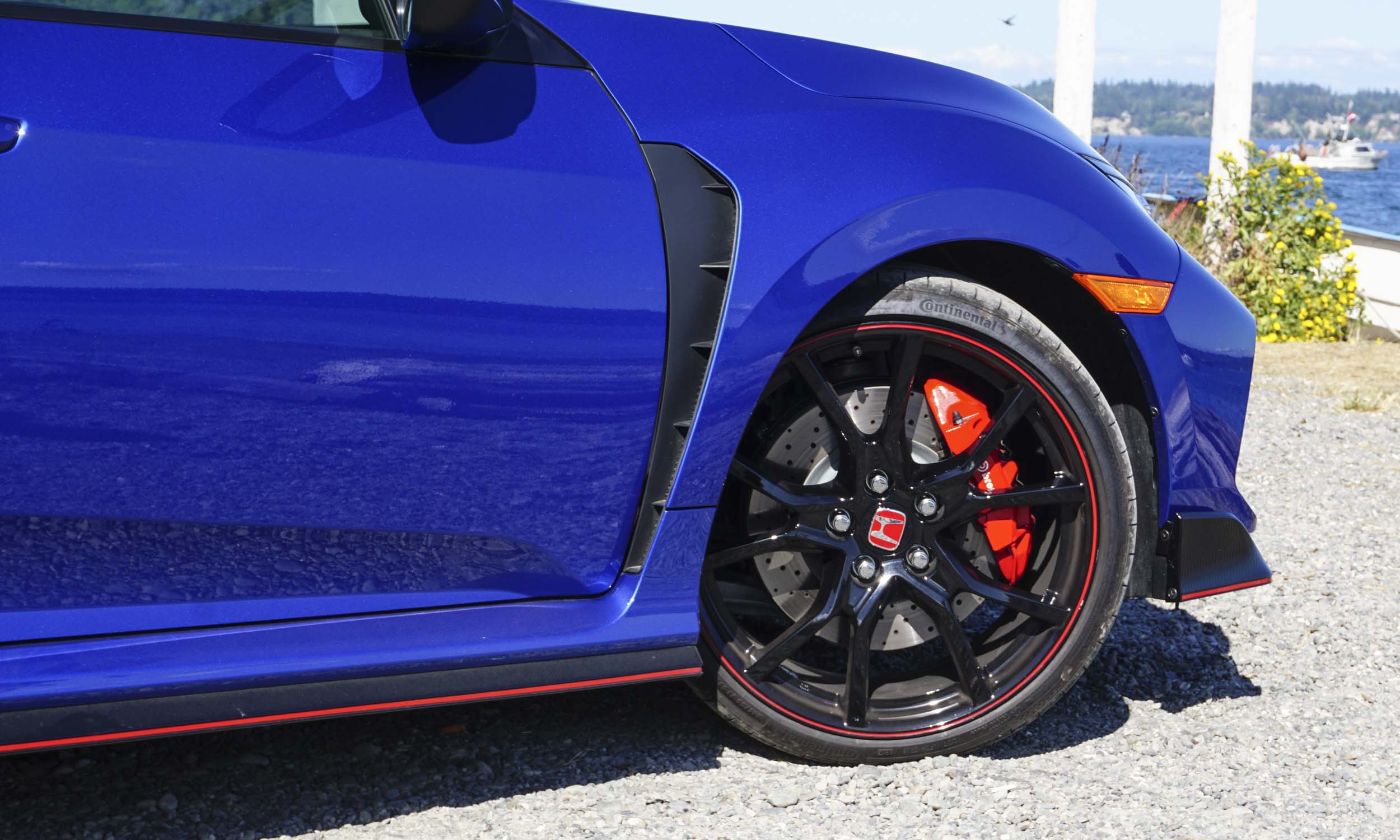 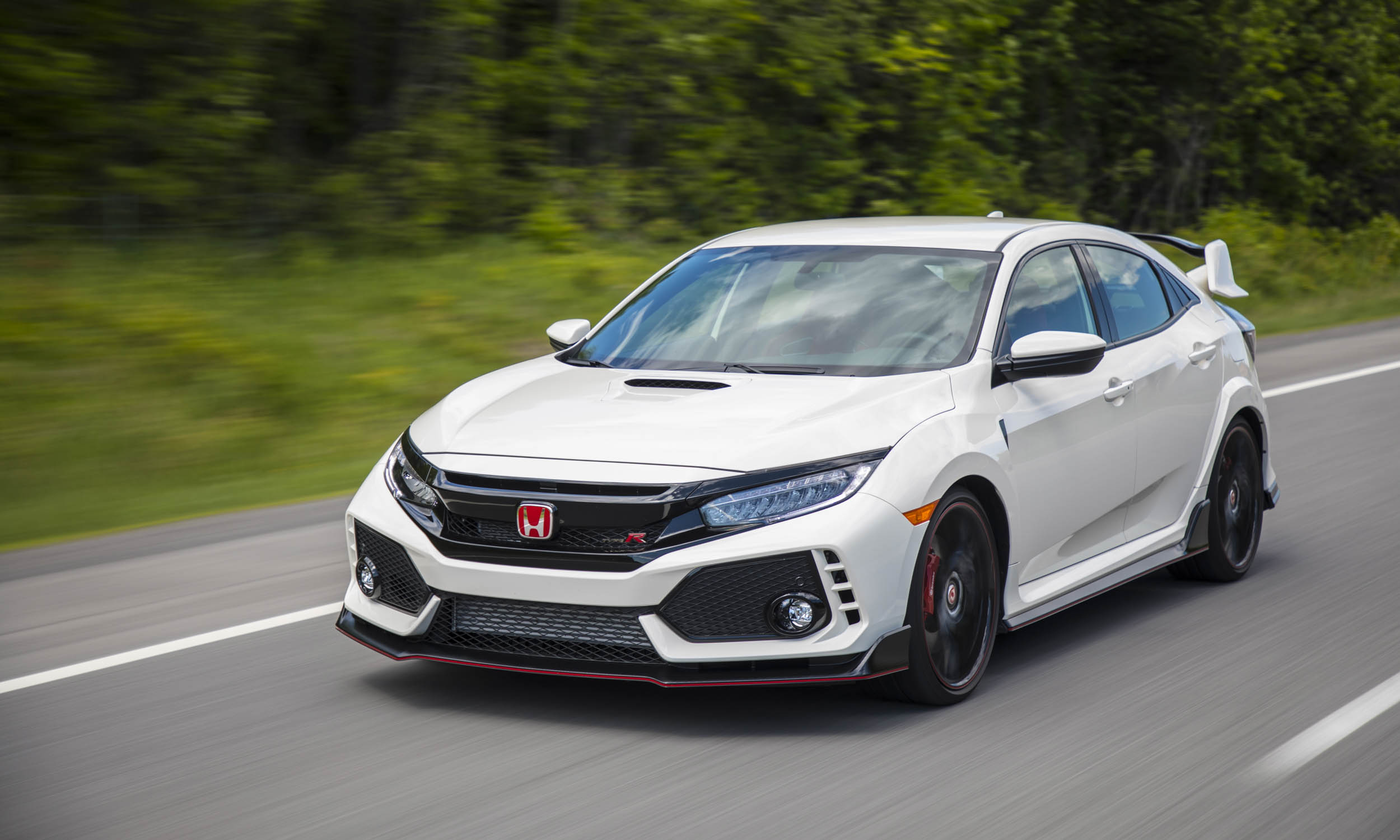 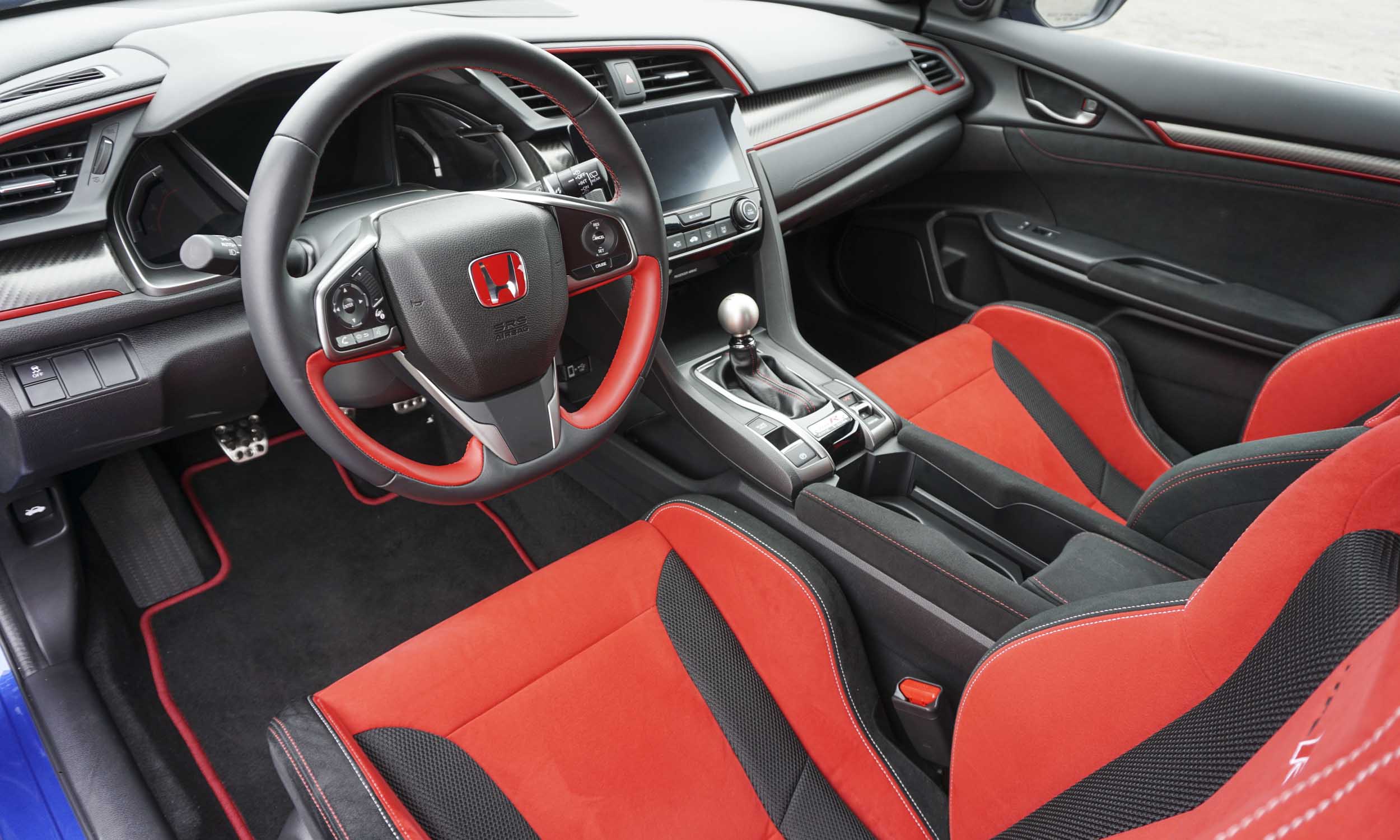 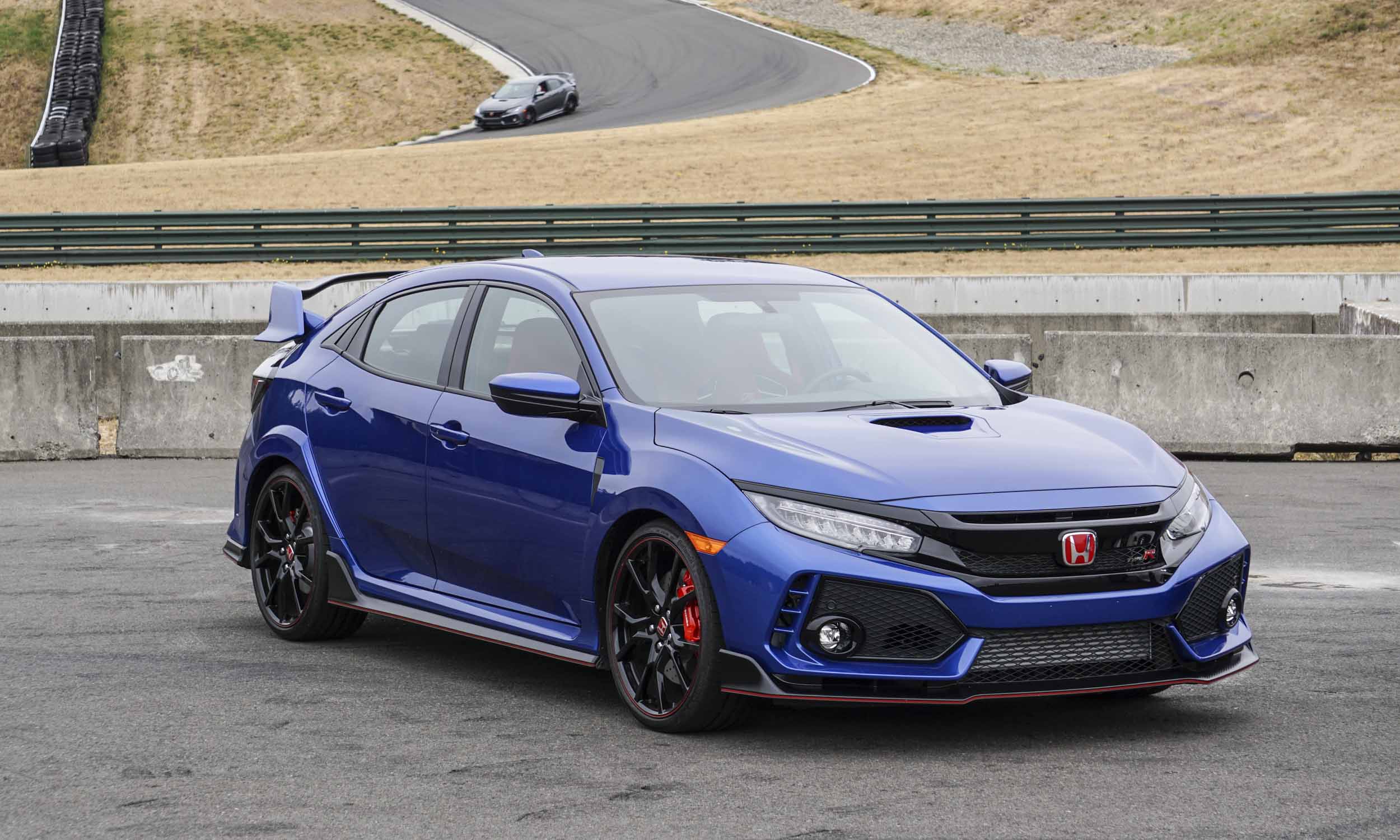 © Mike Meredith, Automotive Content Experience
On the Track
Honda touts the Civic Type R as a race car for the street, and it truly is at home on the track. For a Type R preview, Honda wisely invited eager auto journos straight to the track — specifically the 2.47-mile Ridge Road Course at The Ridge Motorsports Park in Shelton, Washington. With 16 turns and 300 feet of elevation change, the Ridge offers a perfect opportunity to experience the Civic Type R in its ideal environment. 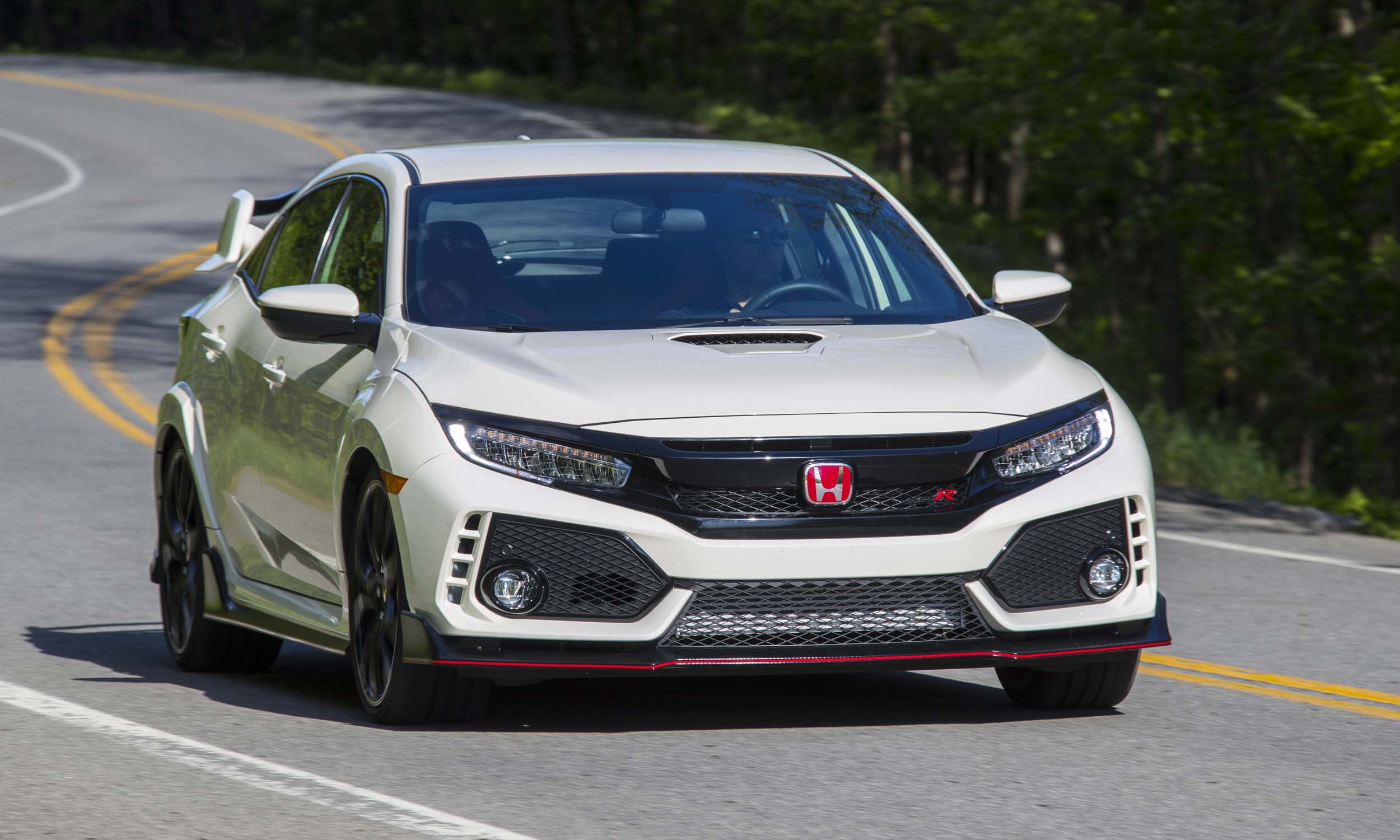 © American Honda Motor Co., Inc.
Balance, Power
Not surprisingly, the Civic Type R is easy to drive quickly when following UK native and Indianapolis-based sports car racer Ryan Lewis around The Ridge’s technical road course. Using +R mode, the Civic Type R pulls strongly out of slower corners without any torque steer and without feeling any intrusion from the traction control. Through long, sweeping corners and over fast blind crests, the Type R’s chassis feels balanced and well controlled. Steering inputs are direct, with no understeer in slow or fast corners. The suspension design and steering cure the ills normally associated with front-drive cars during high-performance driving, aided by sophisticated electronics. Amazingly, the tech gets integrated so unobtrusively that drivers never feel the intervention. 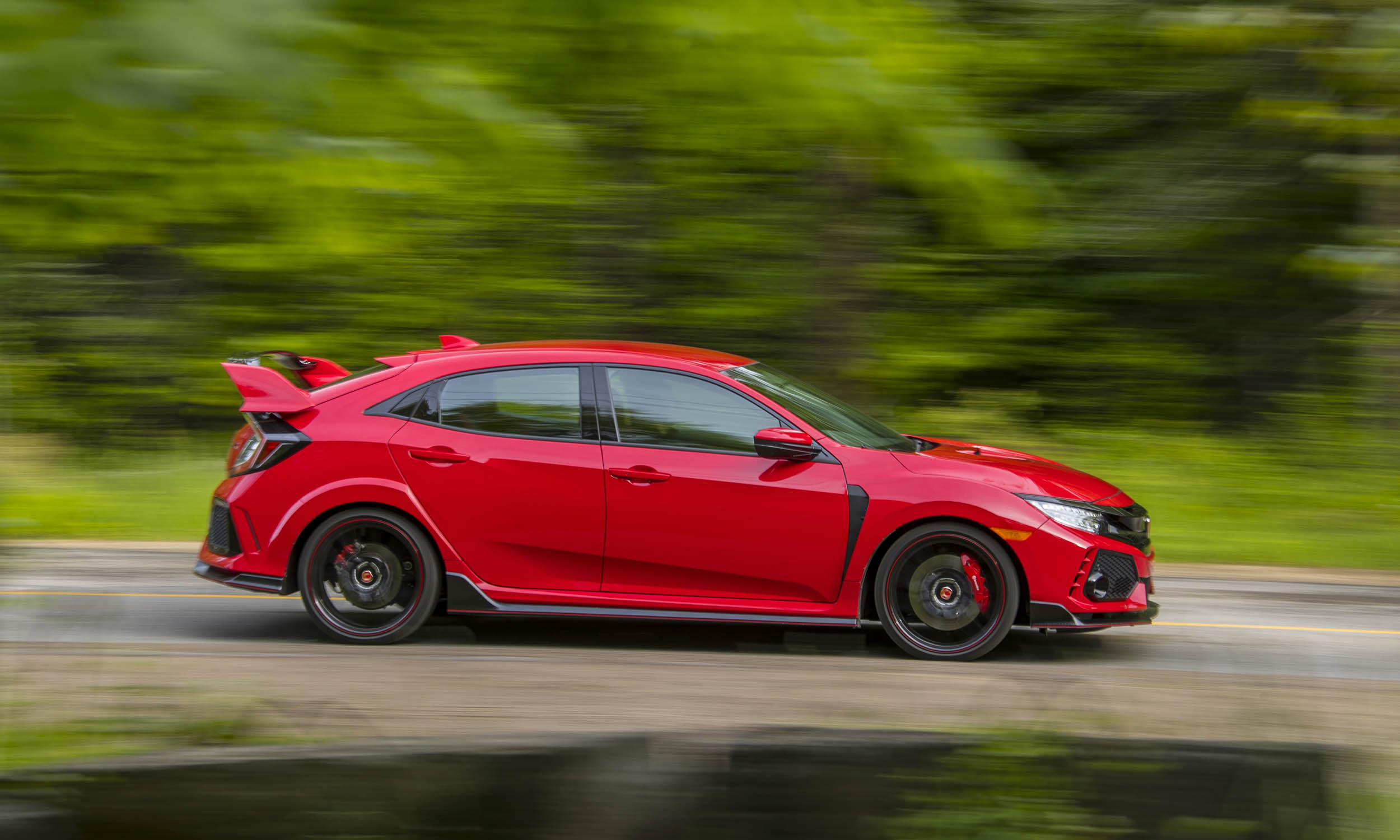 © American Honda Motor Co., Inc.
On the Road
On the street, the biggest surprise of this hot hatch with 300 horsepower delivered through front wheels turns out to be something that it lacks — torque steer. It has none. The 2.0-liter turbo offers abundant power for passing at highway speeds, but Type R drivers will need to be on their best behavior. There is nothing stealthy about the look, and the Type R practically begs to be pushed a bit more. Running up through a couple gears from a dead stop puts even the tamest drivers dangerously close to local speed limits, and the Type R proves extremely capable handling twists above posted limits. 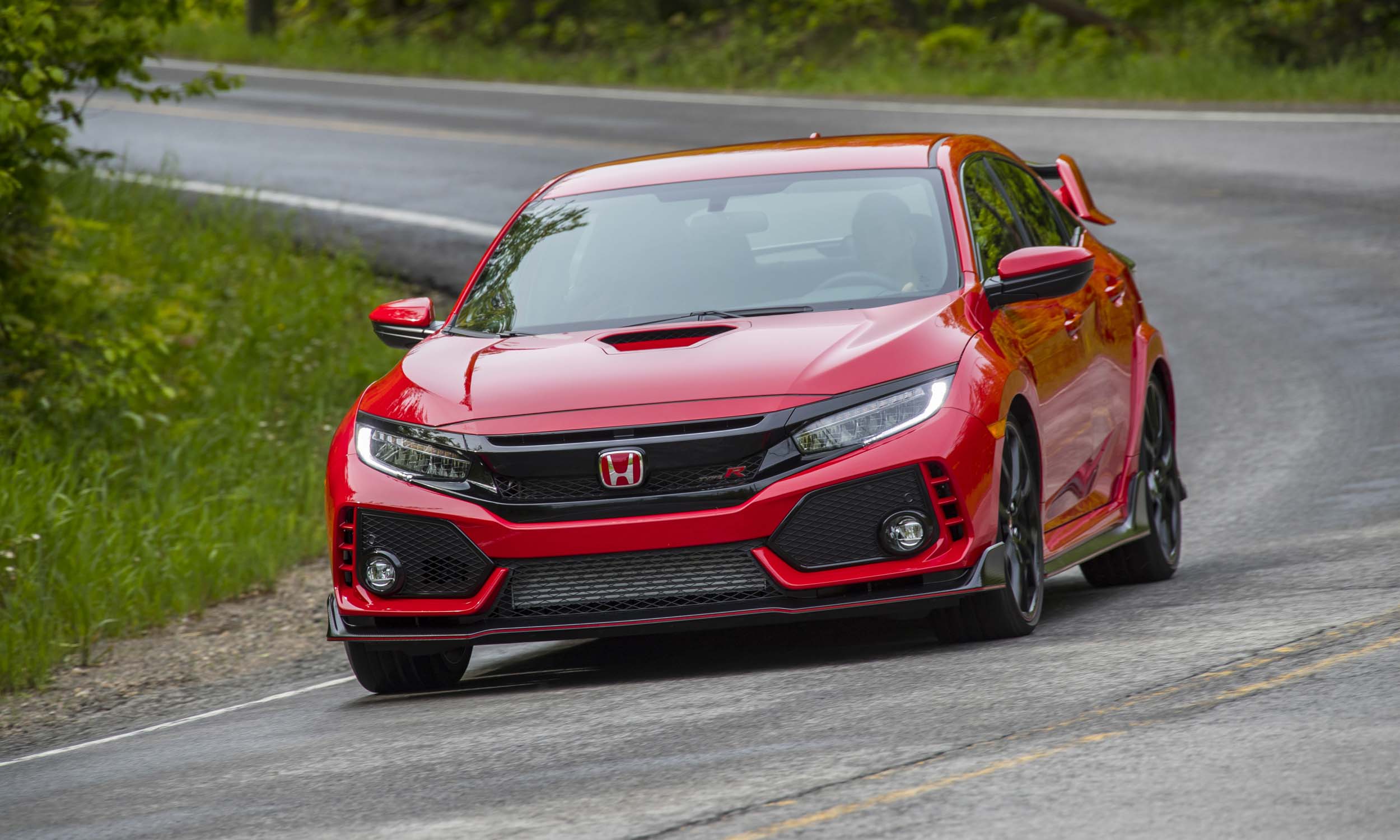 © American Honda Motor Co., Inc.
Sport Mode Best
While +R mode remains the best choice for racetracks, the default Sport mode works best for street work, since it has less aggressive settings. Comfort mode offers softer damping, but nothing near the ride of a luxury car. Sport mode turns out to be a nice balance of firm but not too harsh. 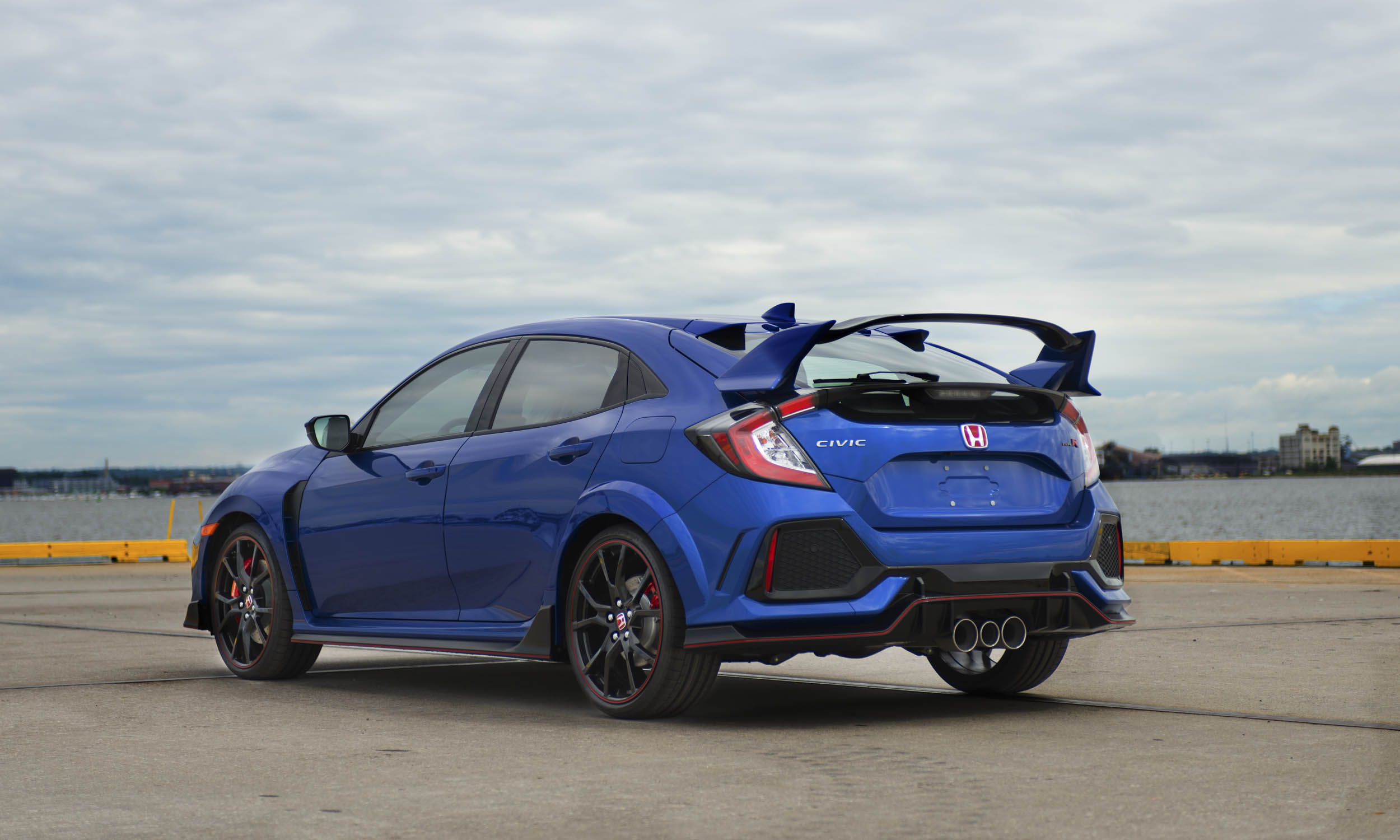 © American Honda Motor Co., Inc.
Right for You?
The Civic Type R offers 300 horsepower, a 6-speed manual, a limited-slip differential, adaptive dampers and plenty of features that create a compelling performance car package at a very competitive price. Despite its front-driving setup, the suspension design and other technologies have tamed any pushy characteristics to deliver a balanced, stable platform that begs for apex-clipping fun on a track at speed. And even though the Type R’s exterior doesn’t resonate with everyone, it’s really a matter of personal choice. For those who want a compact performance car, it’s hard to get any more car for the money than the Civic Type R.